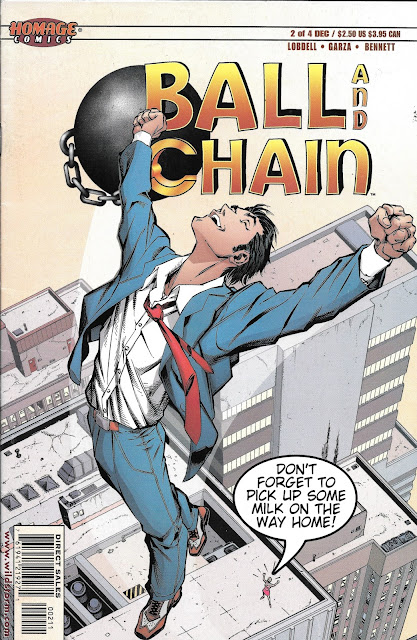 Are superpowers cheaper than divorce lawyers?

I’ve enjoyed many of Scott Lobdell’s Generation X books that have found their way into the Crapbox. Also, I possess lots of single issues from his intriguing X-Men arcs (X-Cutioner’s Song, Fatal Attractions, Phalanx Covenant, Age of Apocalypse, Onslaught and Operation: Zero Tolerance) that aren’t complete wastes of time. In general, my viewpoint of Lobdell leans toward the positive end of the spectrum.

I know he’s had some controversy from 2011 and 2013 that may have turned off readers indefinitely, and if you are one of them I completely understand why. I however, give his books a chance.

Like this one from 1999 that appears to have fallen off the face of the Earth. I don’t see it traded or listed in his bio or anything.

The Ball and Chain miniseries spanned a scant four issues before blinking out of sight. The story involves a couple on the verge of divorce who find themselves possessing superpowers triggered when they are together. Beset by supervillains and aliens, will Mallory and Edgar Bulson’s relationship survive? Will they find that adventure and excitement rekindles their desire to be together or will they try to smash each other to kindling with their new-found abilities?

I must admit the story had me mighty intrigued. I found myself rooting for them NOT working out their issues and going their separate ways. Neither of them is particularly unappealing, it just seems cliché to have them fall back in love when a majority of marriages end in divorce. I don’t wish them harm, just want that at issue four they decide to be good friends who fight aliens, but see other people and live separate lives.

Probably in the minority on that count.

Let’s meet our couple, shall we? Of course, the Crapbox never delivers an entire run of anything (except Spawn, but who counts that?), so we begin our meeting at the start of issue number two, with Mallory and Edgar going at each other while floating above the remains of their apartment. Their abode has been ruined by an attack helicopter sent by a bad guy we meet later who wanted their powers for himself. The exact nature of all this will become clear as we go, but first let’s meet the happy pair, eh?

Not quite marital bliss. The assault ‘copter pilot notices it too and gives his younger co-pilot some insight. 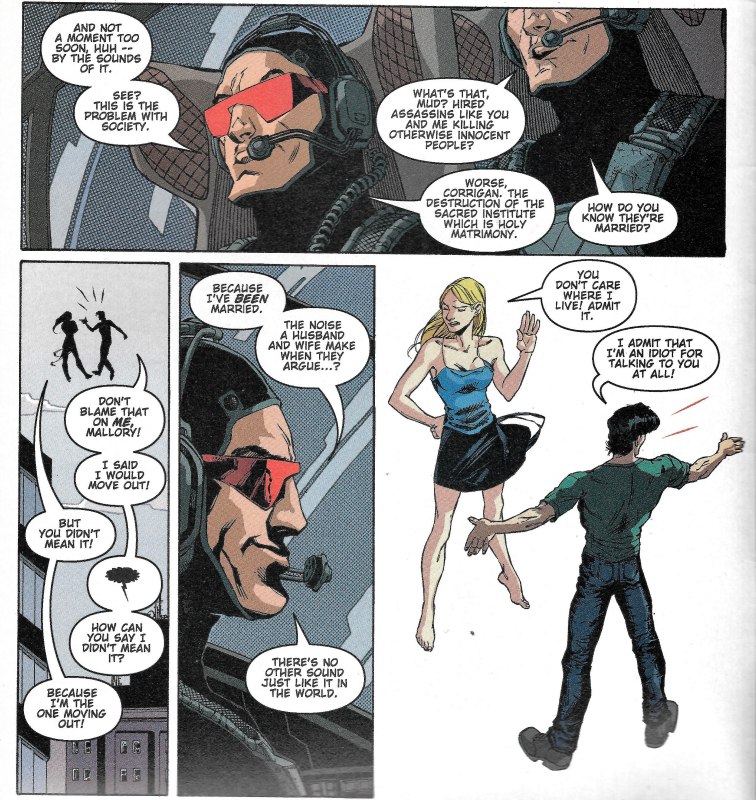 I agree with this: when husband and wife argue, there is no other sound like it in the universe. I recall it well from my days with my ex-wife. I would rather rub a bag of rusty nails across a chalkboard than go back to hearing the screeching sounds we would make in our disagreements.

I like that we have witty banter here. Lobdell gets buy in from me on that fact alone, so I settle in to see where this all leads. 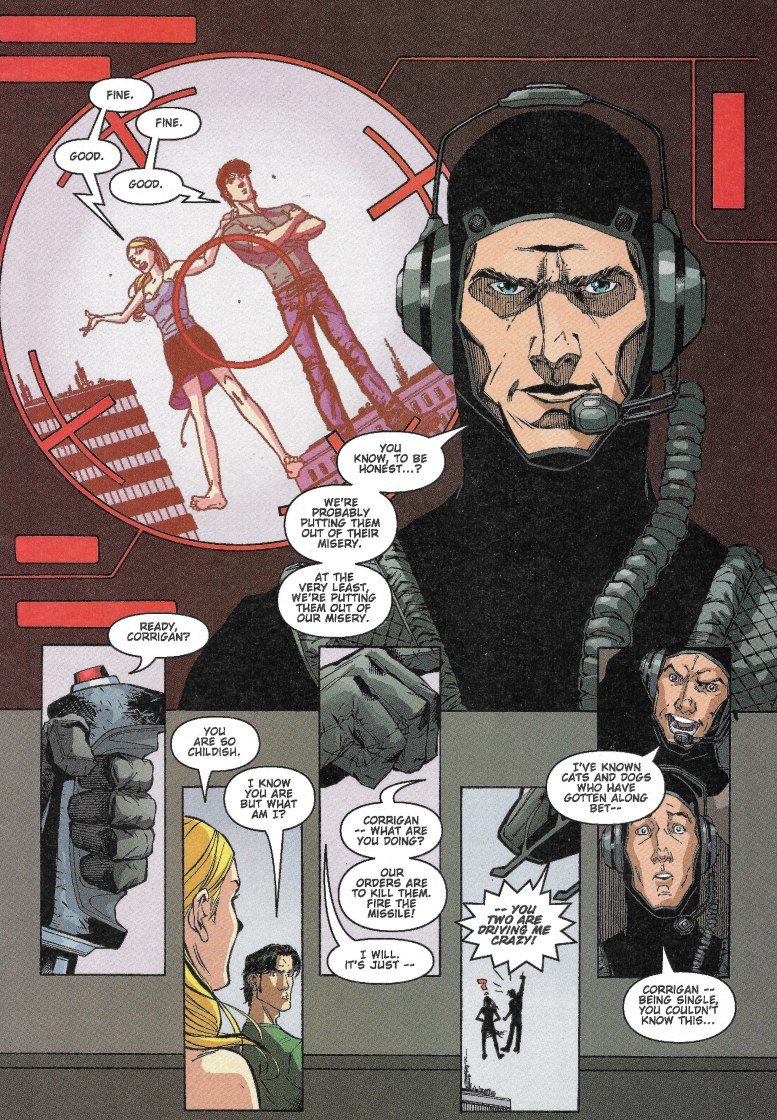 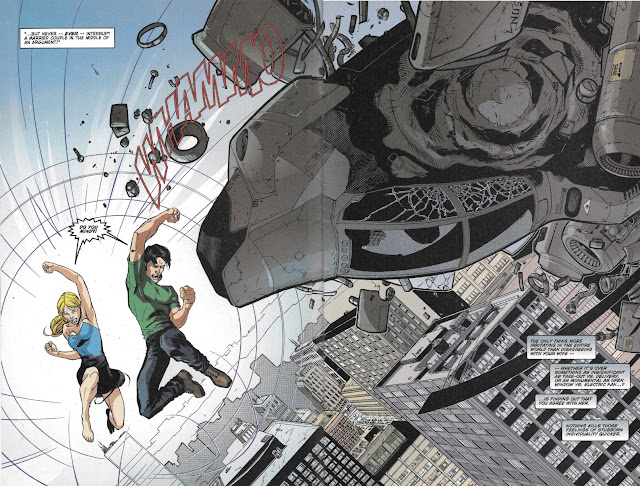 Ah, yup! That’s exactly right. Never make a couple angry at you when they are angry at each other. Not if you want to live. And that’s non-superpowered couples I’m speaking of.

The copter lands on a garbage barge and we are back with our “happy couple.” Mallory realizes they are flying and suddenly starts flipping out. 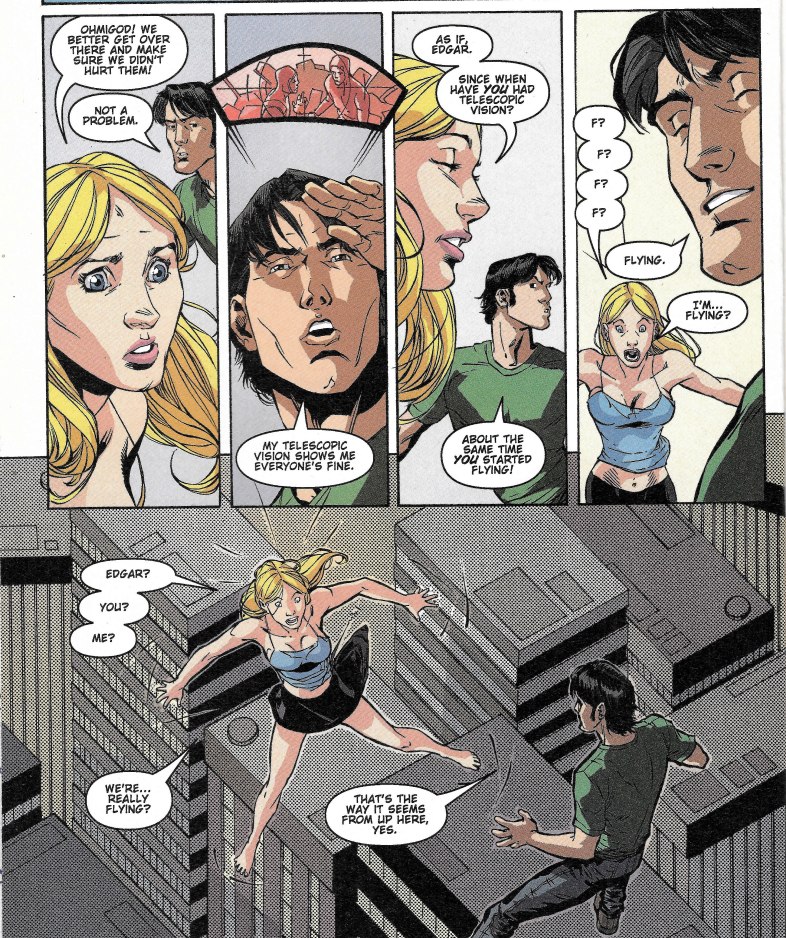 As you could expect, this causes her powers to cut out and a short plummet down the side of a building ending… 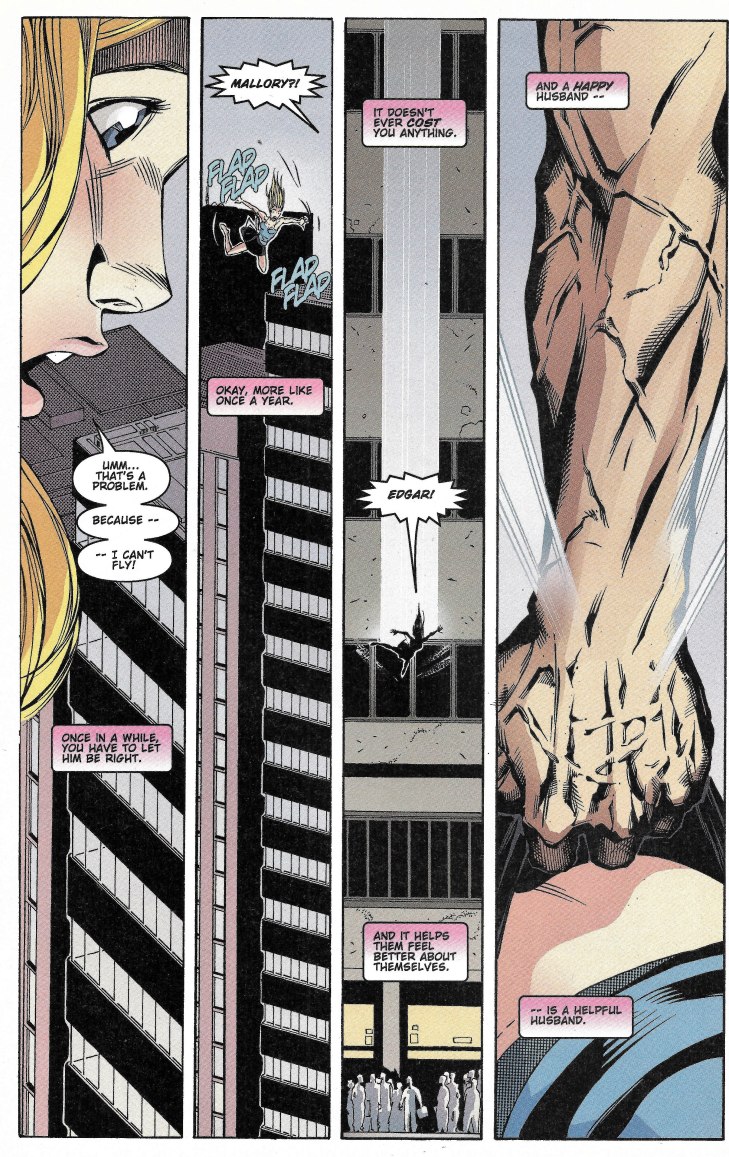 …in her not being a street pizza, thanks to an assist by Edgar. 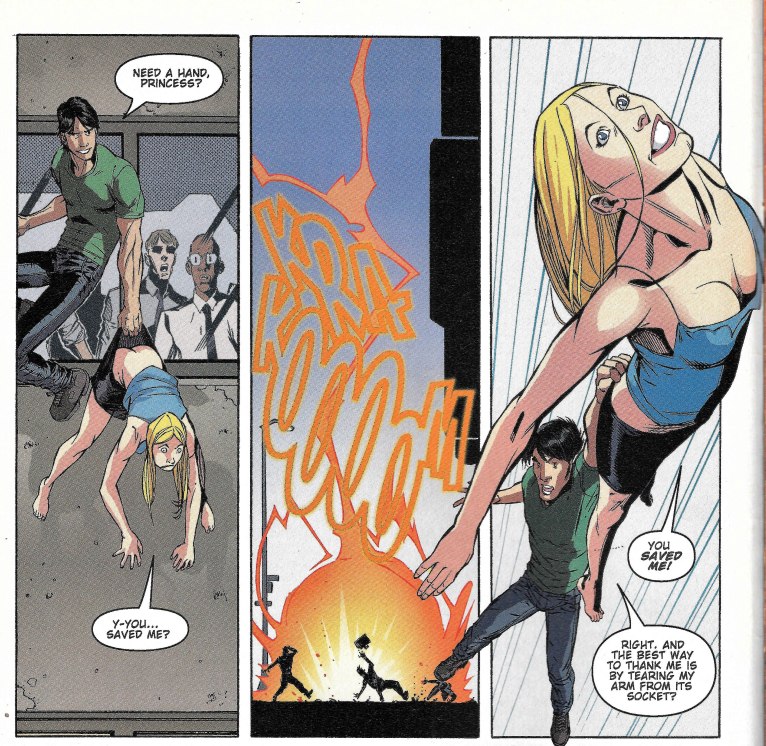 Watching these antics at street level is a very unhappy bruiser, our main human villain of the piece. Appears our pair intercepted these powers via some kind of alien meteor strike (or that’s what I gather from this and the following page) that our hulking business suit laid claim to but did not intercept in a timely fashion. He is also behind the helicopter attack. 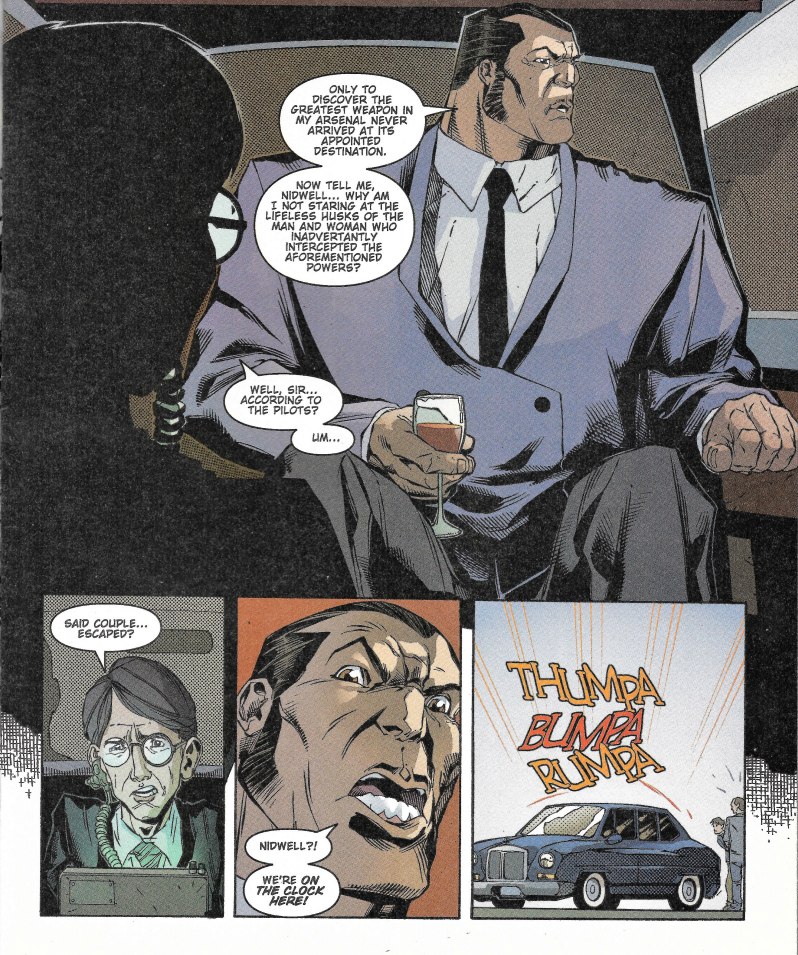 As this is going on, the Department of Public Works is examining the crater left by the meteor and they miss discover something: a green holo-head suspended above a super-science floating drone. Meet our book’s answer to Zordon, as he is here to exposition dump the plot at some point, how the heroes’ powers work and what they are really supposed to use them against. 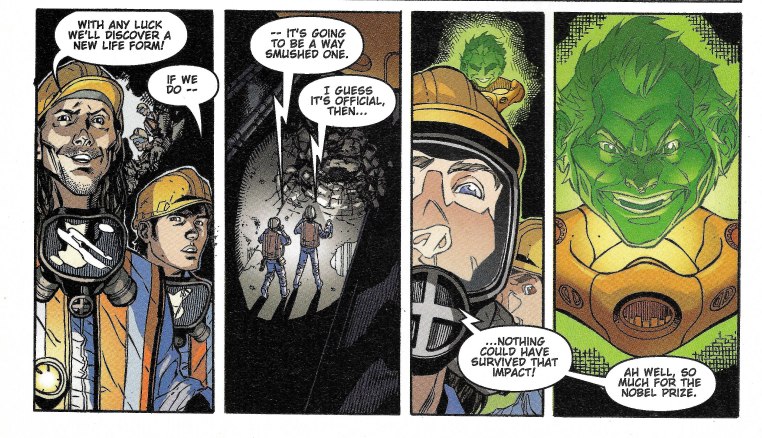 We will catch up with him a bit later in the book, but for now we turn back to Mallory and Edgar, on the edge both figuratively and literally. 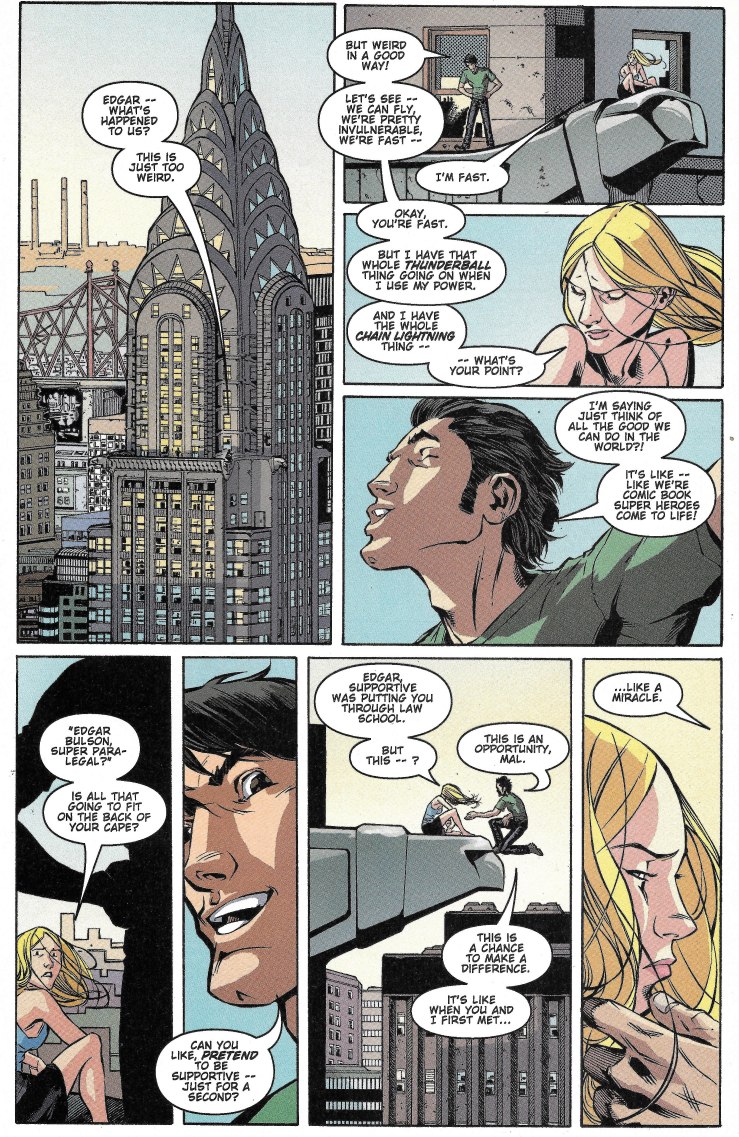 You’d think this would turn out okay, but instead it goes South almost instantly. I feel that Mallory and Edgar turned a corner sometime before the book even began and there isn’t really a way back for either for either of them. They are over a hump that relationships don’t come back from. To prove my point… 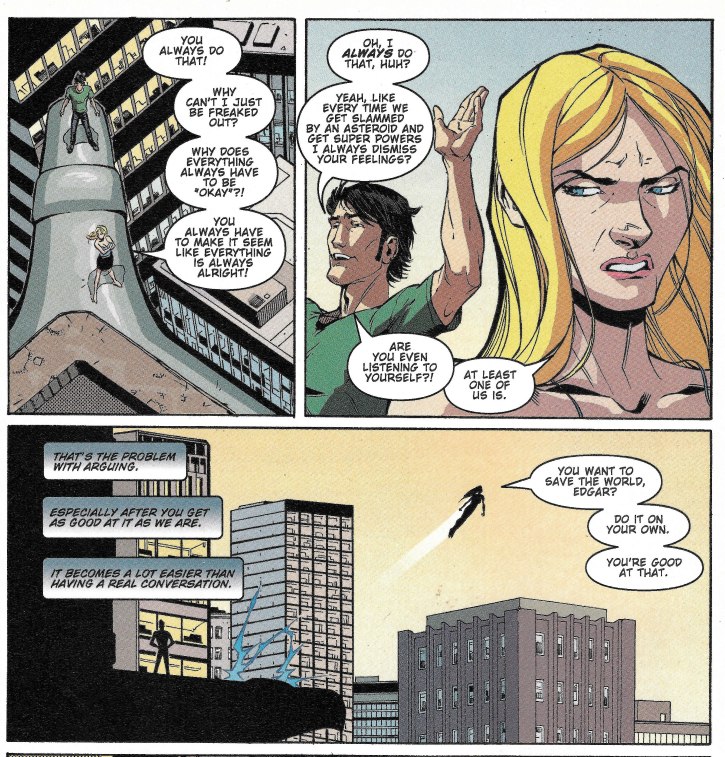 …Mallory flies off in a huff to find somewhere else to spend the night.

Next morning, the floating head thing attempts to make contact with Edgar… 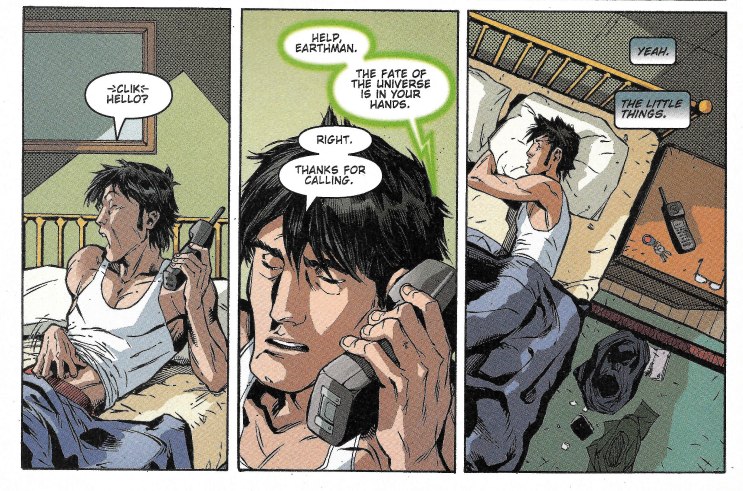 …but he doesn’t do mornings, so that clearly is not happening. So, the head shifts his attention to Mallory, who is busy making some changes. 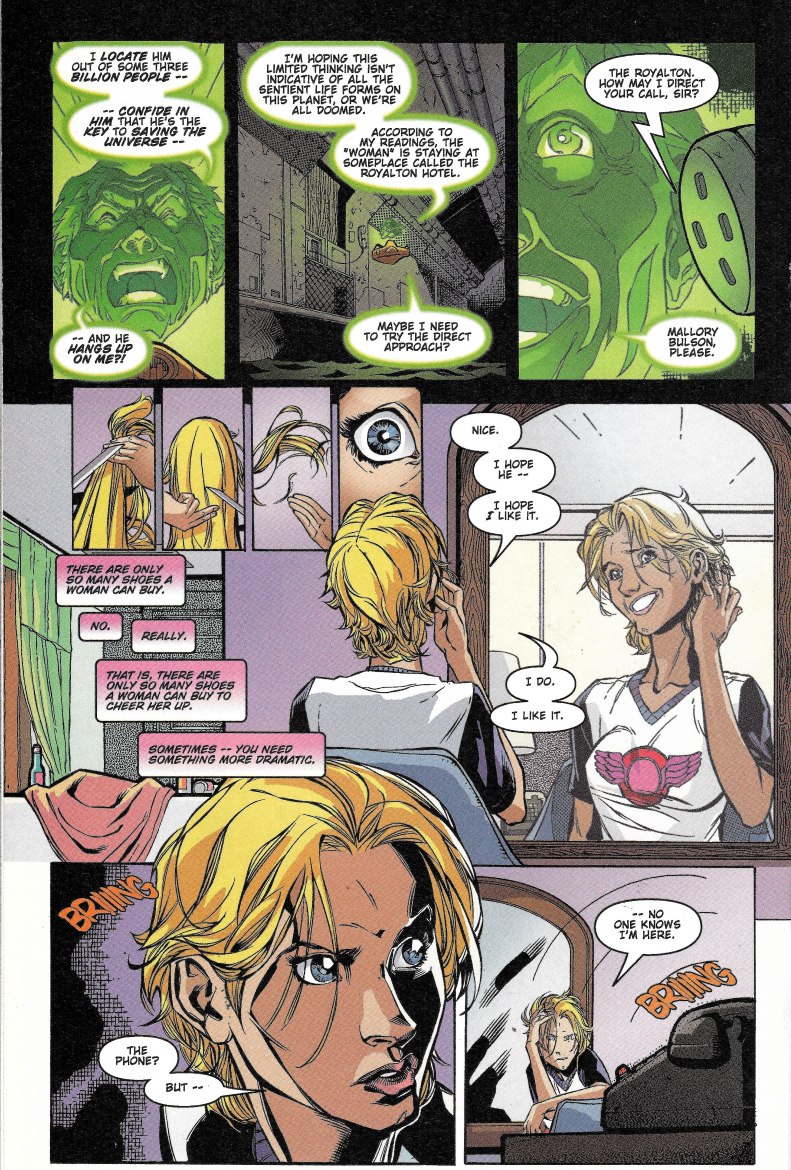 When our green floating head calls, he doesn’t mess around this time. Transporting himself to Mallory’s hotel room to explain the danger she and Edgar face. 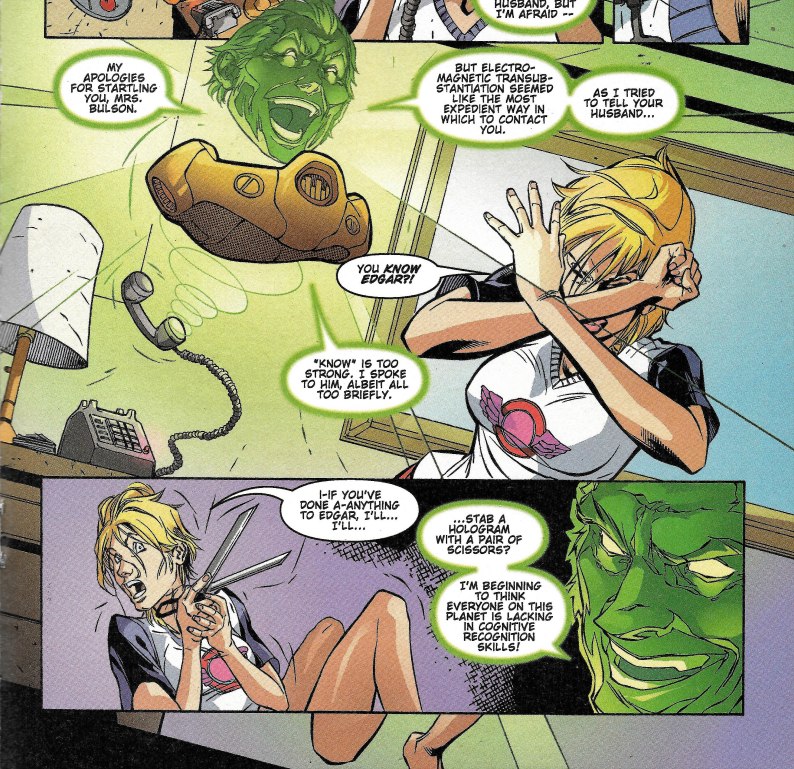 Mallory tries to contact Edgar at work after listening to head-on-a-hockey-puck, but Edgar won’t pick up or return her calls. Which leads to this bit of inspired dialogue that I found intensely amusing. 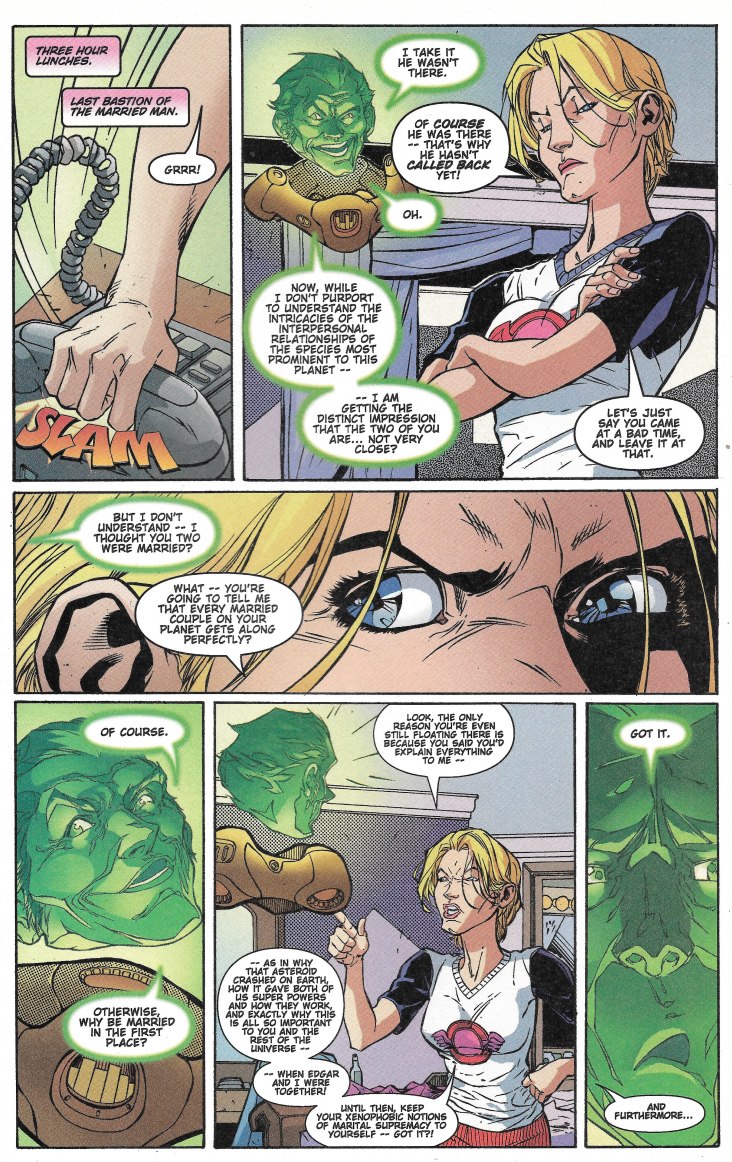 Since the phone clearly isn’t working, Mallory rushes out to Edgar’s work after finding out some very important info from out head buddy. She just misses him by a hair’s breadth, however, which might end up being fatal. 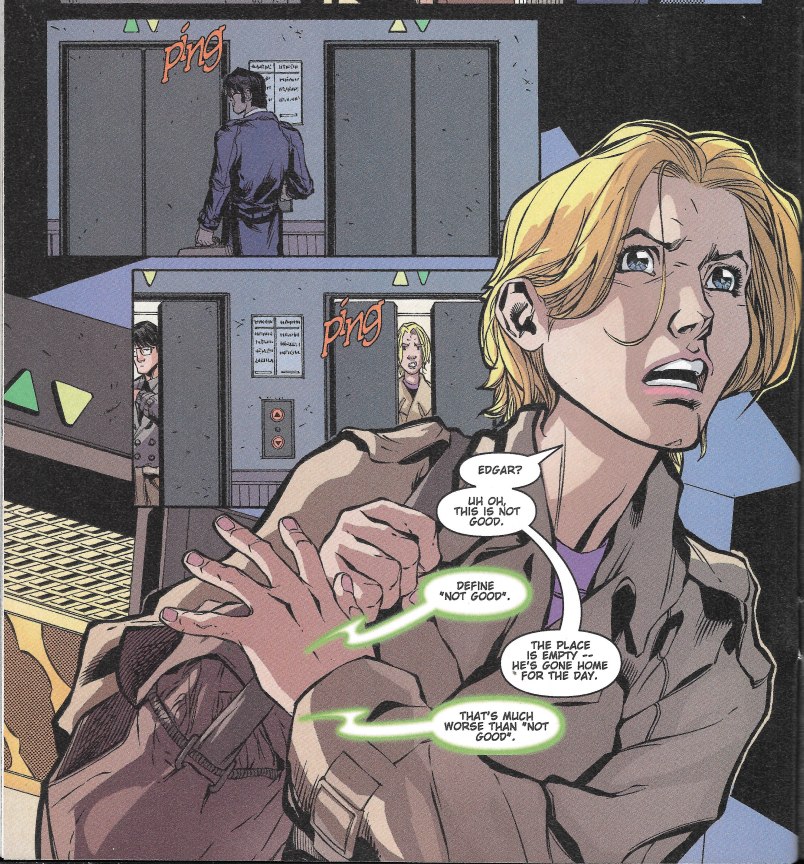 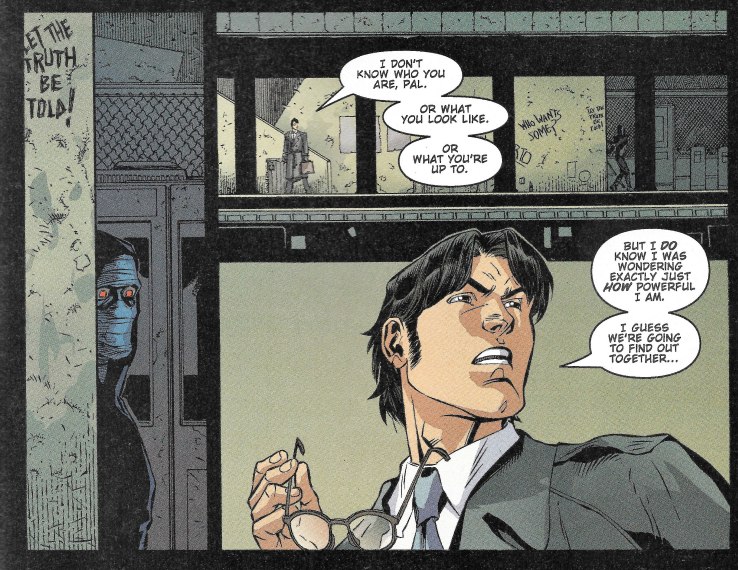 And as Mallory races to catch up with him, the conversation becomes why this is so important. 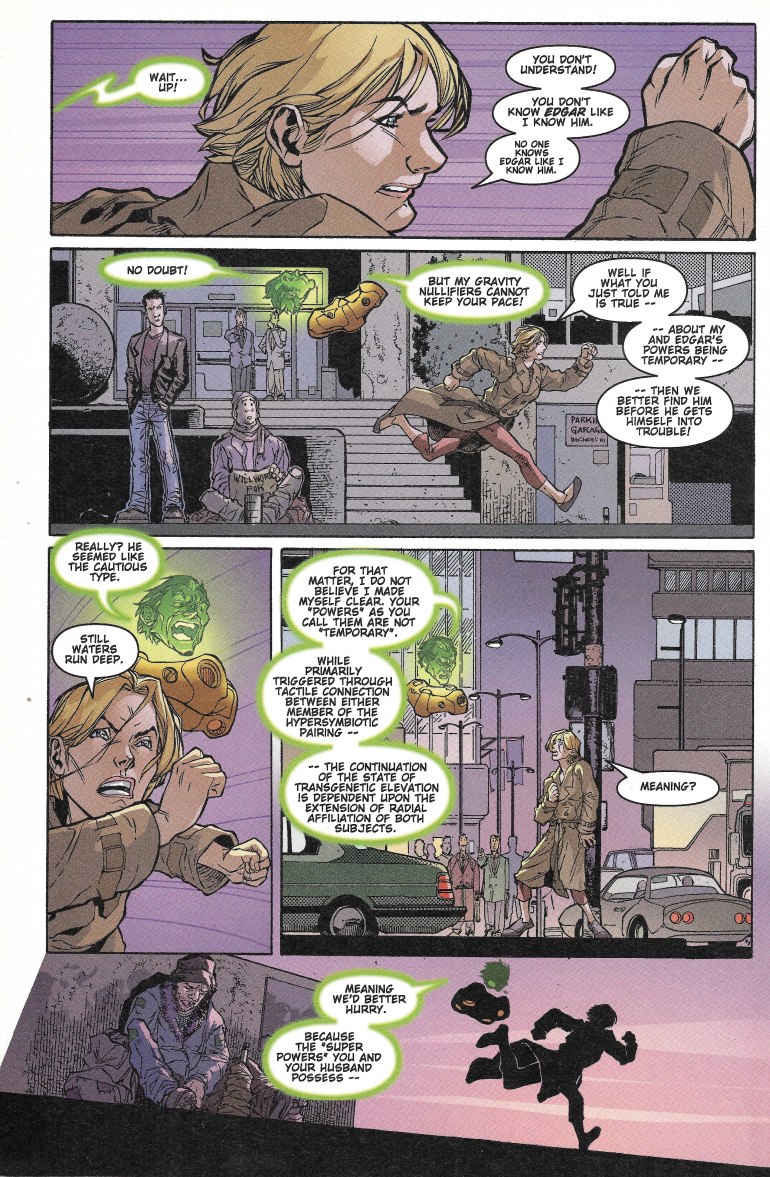 It seems for their superpowers to work… 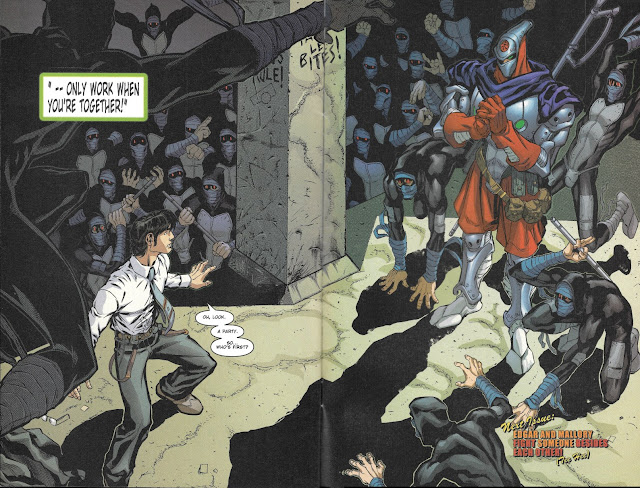 Not at all unexpected. In fact, completely telegraphed. However, that isn’t to say that it doesn’t raise an interesting question or two for the next two issues. Will they stay together just to fight crime or will they get back together permanently?

Whichever it is, I’d like to find more of these as the writing was sharp, the art clean and the entertainment value high. Just hope they end split up. Mallory and Edgar clearly weren’t made for each other.