Some random Spider-Man books, Part 12
A famous first pairing, if ever there was one 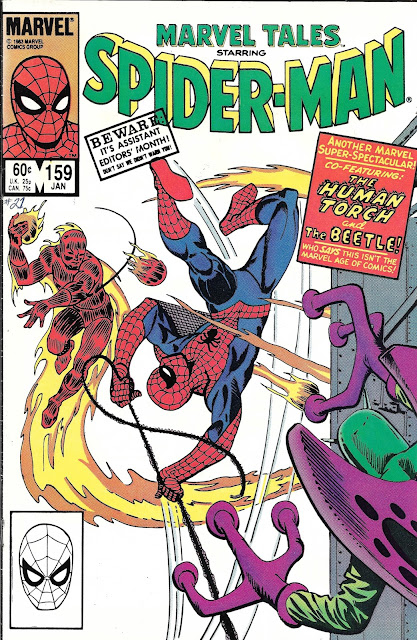 That last story struck me with the idea that I had an earlier story in the Crapbox stacks of a Spider-Man – Human Torch pairing and bless my soul if it wasn’t their third adventure together. Torch and Spidey would team up numerous times, mostly in Spidey’s mags. The duo were so popular that they earned a spin-off title for a time in Marvel Team-Up.

Marvel Tales, however dates back to before the origin of Marvel Comics out of Timely. The book focused on horror stories back then, but switched to reprints of the expanding Marvel universe in its third volume in the 1960’s. Amazing Spider-Man stories made up the bulk of these reprints, possibly because the originals are such well told stories, even if with all the dated references and clothing styles.

This issue reprints Amazing #21, which if you noticed the issue number was Marvel Tales #159, must mean they began back at Amazing Fantasy #15 for another round of reprints at about #137. 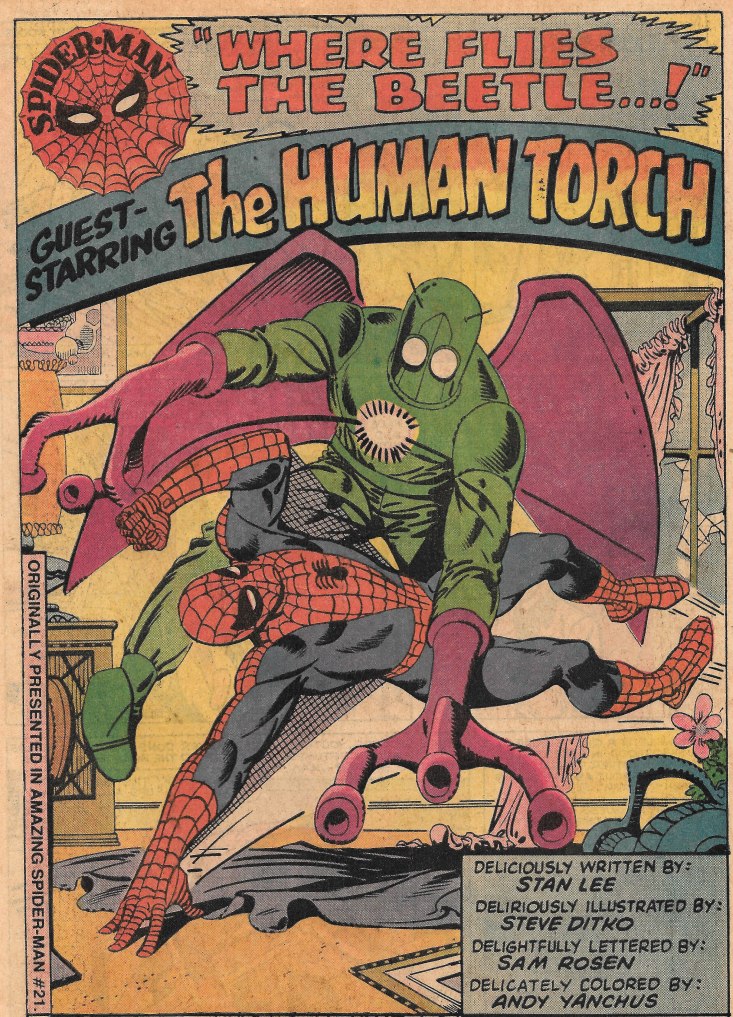 We open with noticing we have Stan Lee adding the words to Steve Ditko’s unique and Amazing pictures. I love Ditko, although I feel he was so much better in the Doctor Strange book than he ever got to be here in Amazing. Ditko’s pencils were MADE for weird, occult dimension hopping. He’s good at Spider-Man too, just there are some people born to do a certain thing.

For those of you not turned on by The Beetle, he was my FIRST Spider-Man villain, coming at me by way of a cheesy little book called Spidey’s Super Stories and starring the gang from The Electric Company. So I’ll pay him more respect than you will as a “major” Spider-Man villain. Not even sure he’s ever successfully stolen anything.

So here we are with our three principle characters, each starting out from very different circumstances. 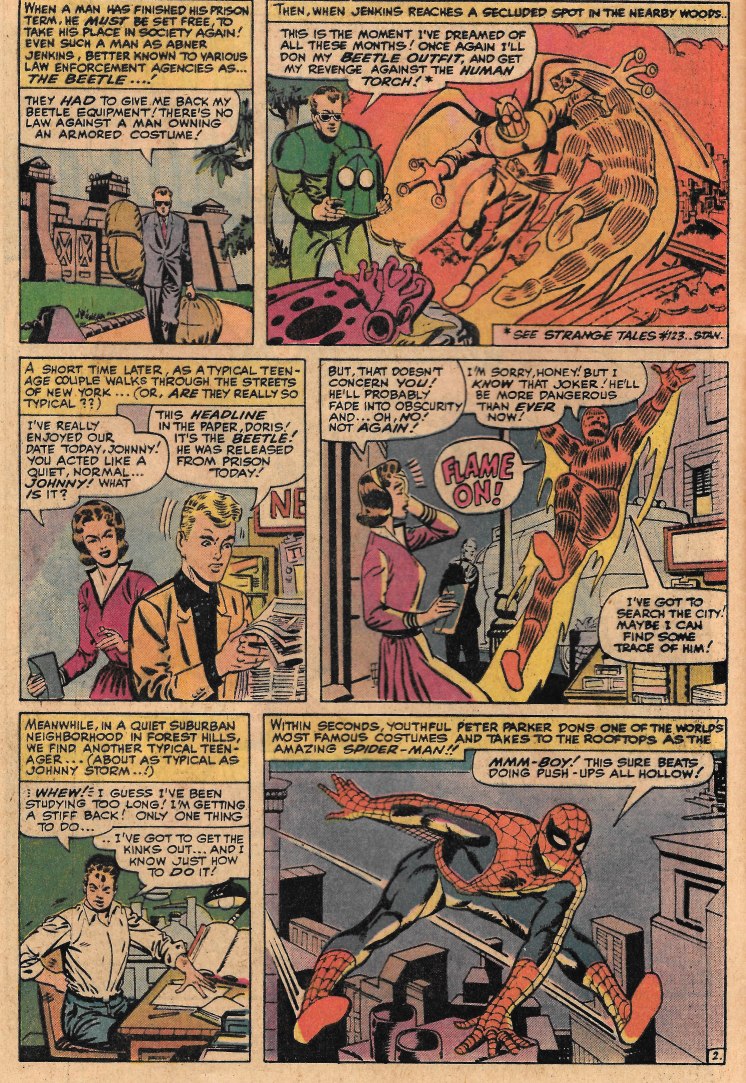 Note the quantity of words per page and the quaint way in which story elements are put into play. The government doesn’t confiscate expensive military-grade armor like The Beetle’s. They just let him take it home after prison release. The newspaper puts out a story about the Beetle’s jail time being up that Johnny Storm happens to read. Johnny’s love interest likes him, but despises his Torch persona. These elements test the audience’s suspension of disbelief. Whether it breaks that suspension depends a lot on the generation you were brought up in.

We switch to Spider-Man being spotted by people, who run in fear of what he will do. The Torch shows up and the same crowd reacts in the opposite manner. That starts our ball rolling with these two characters and the rivalry that will fuel this issue. Not to mention The Beetle notices Torch as he arrives at (coincidentally!) the same moment. 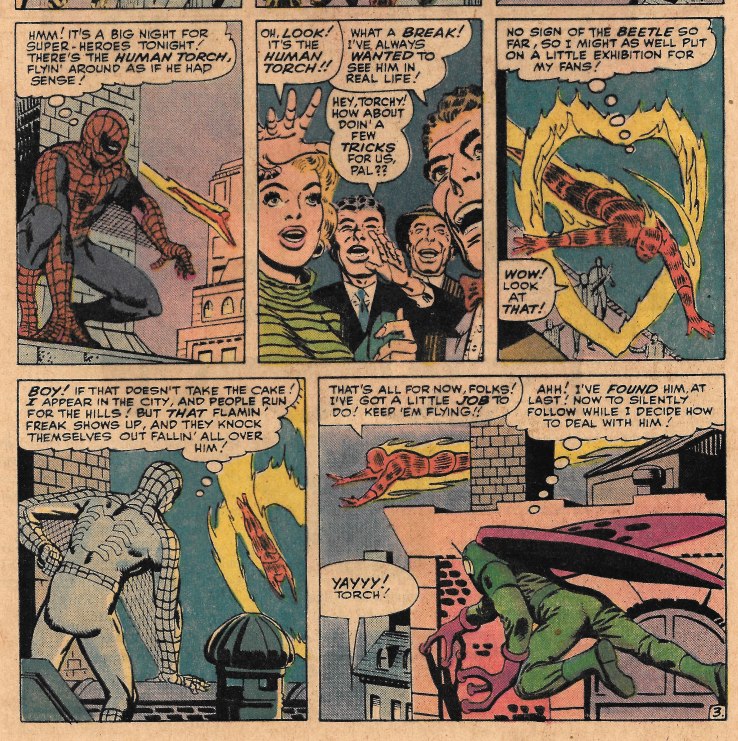 While Spidey leaves thinking he’s not wanted, The Beetle follows Johnny. Lurking outside his window, he hears Johnny’s girlfriend extract this solemn promise from him… 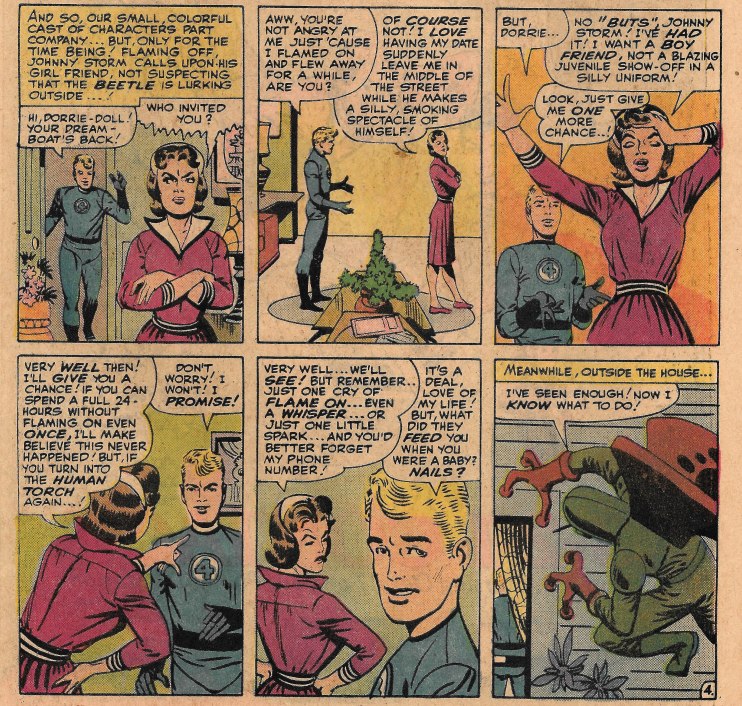 Spider-Man is dissed all the way home, yet the very next day in a city the size of Manhattan, who should Peter Parker run into and be of assist to other than the Torch’s girlfriend. 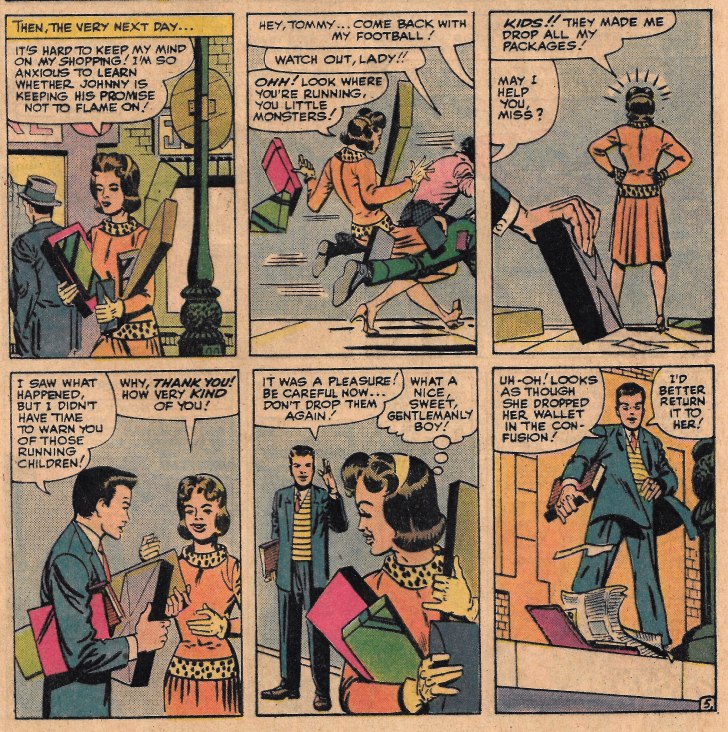 That wallet’s return factors into the next meeting of our four of our characters, as does Johnny’s promise, the Beetle’s vow and his girlfriend’s hatred of Johnny’s powers. The fun part to all of this is watching Lee and Ditko moving all these pieces around like playwriters, trying to get the plates of sardines all there at the right time in the right order. I respect their style of storytelling the same way someone can look at a vaudeville act and see the complexities that go into each performance. Unlike today’s decompressed, trade-fixated multi-issue stories, these chaps had to sell you on a book and a character today, right now. Their audience demanded a complete entertainment experience or else their dollars would walk.

And in a market that changed daily, where comics were never assured of a “next issue,” Stan and staff delivered the exact experience needed to keep the lights on and the fans happy. The house of ideas should learn that lesson before it’s too late for them.

Peter’s visit goes swimmingly, which causes the Torch to be even more put upon to NOT flame on…just as The Beetle makes his final move. 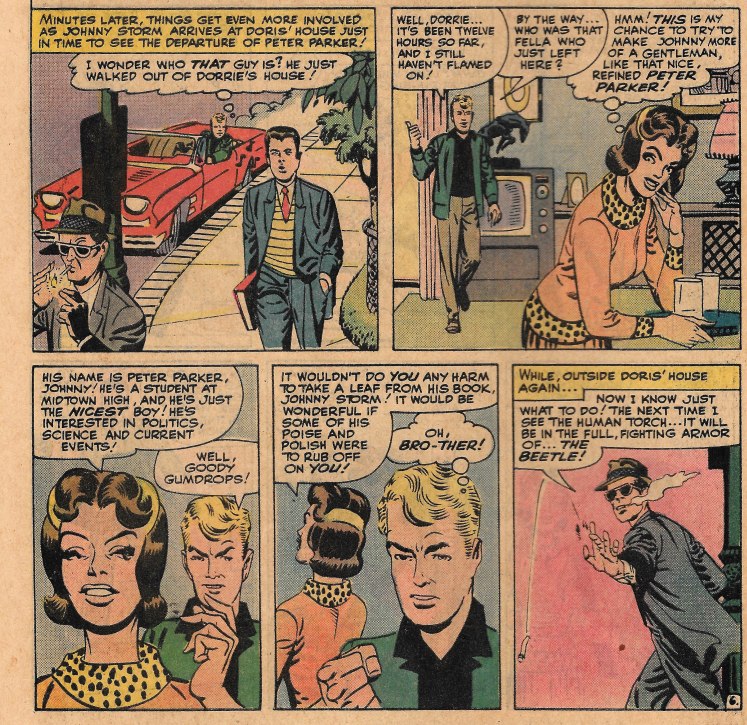 The Torch, hot-head that he is, goes to tell Peter Parker off at his high school and does so in front of Betty Brant and Flash and the gang. In short order Betty gets her feelings hurt and Parker get a chance to show some backbone for once in his civilian identity. It’s great because Parker never loses his “nerd-loser” exterior for most of these tales but here he blows his stack at one fourth of The Fantastic Four. 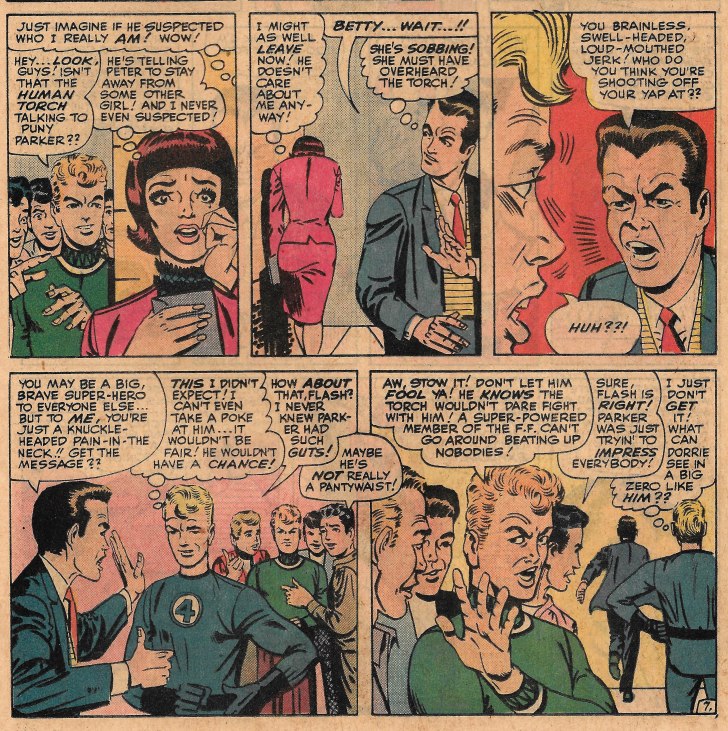 Now the stage is all set. Parker suits up and the Beetle intercepts him before Spider-Man can make a move against the torch. Get ready for some great Ditko battle panels. Loved the old Marvel “house” style. It really shows how much fun comics used to be when we could have a battle like this rage on for two or more pages without each page being one panel. There’s something to be said for both styles, of course. It would just be refreshing to see Marvel use this once in a while. 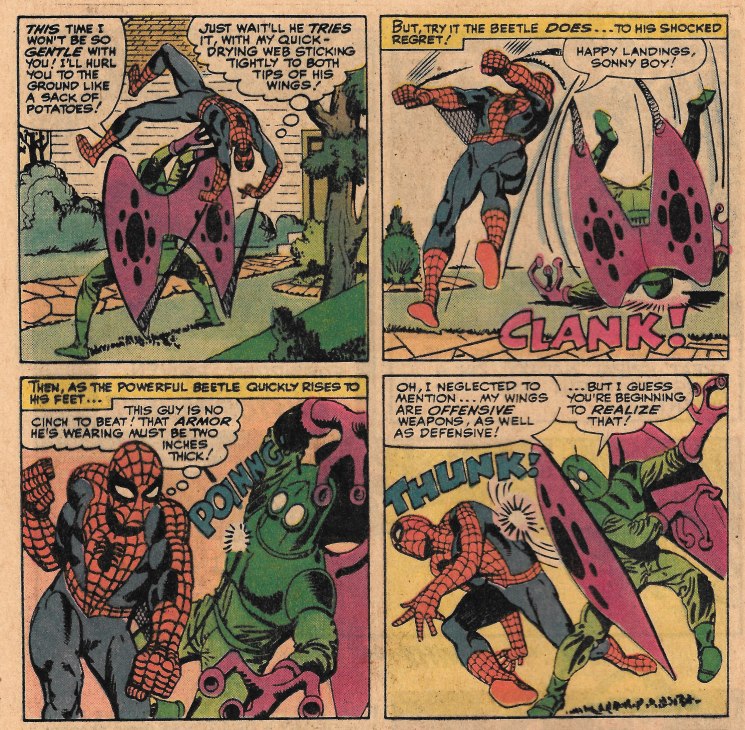 Doris sees the pair fighting outside her window and calls Johnny for help. Which doesn’t go exactly as she expects. 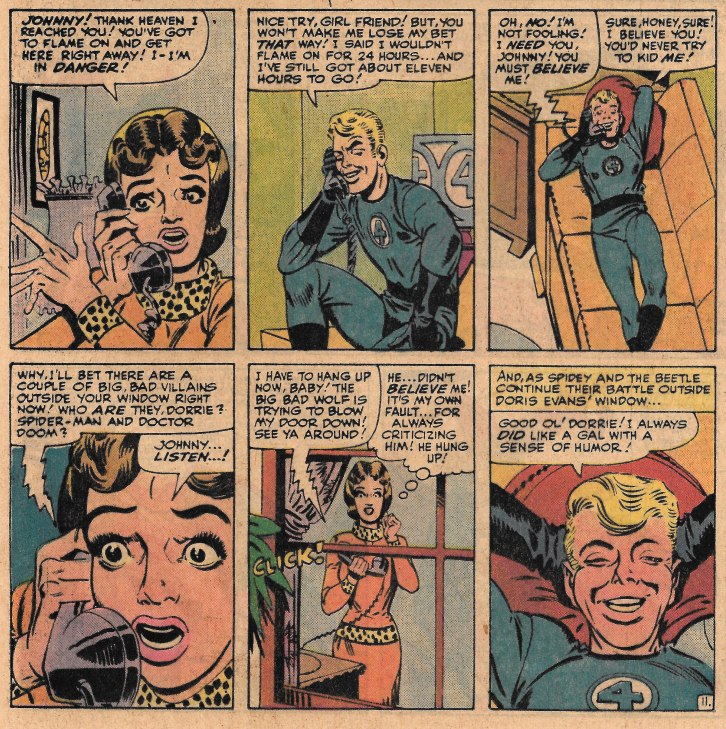 Heck, Spider-Man and Beetle end up brawling in her actual living room before Johnny still doesn't take her seriously. 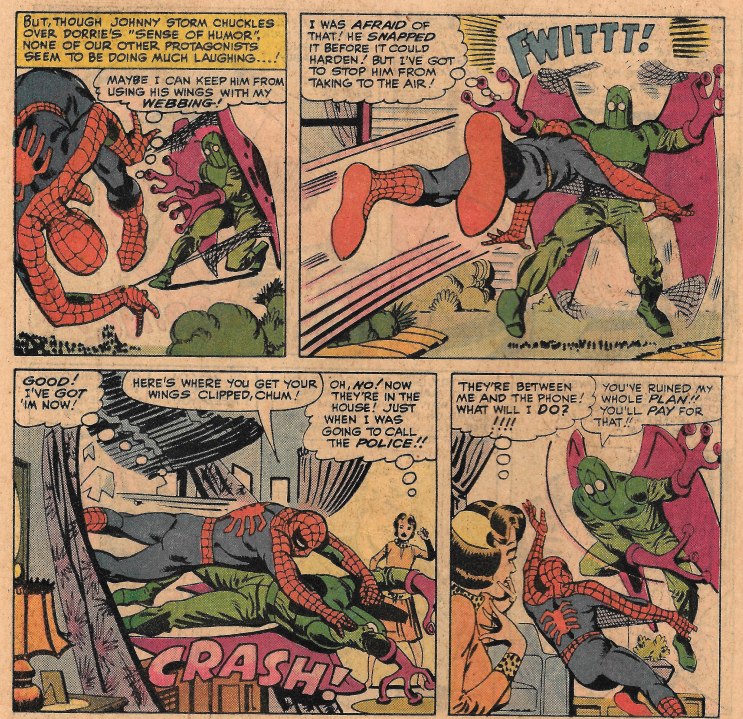 Torch is finally on his way over for a date when the Beetle breaks free of the fight and steals away with Johnny’s girl. 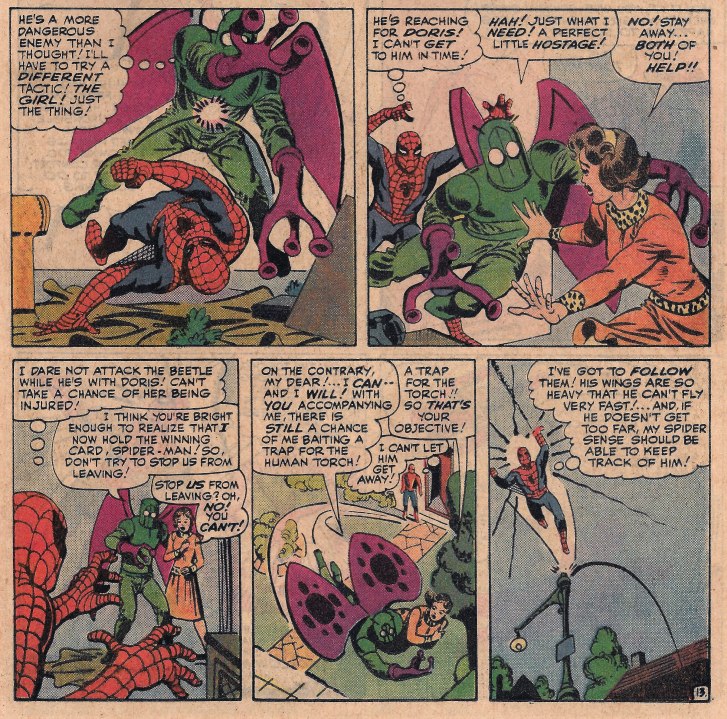 He arrives to find the place trashed, and seeing Spider-Man, comes to the wrong conclusions. 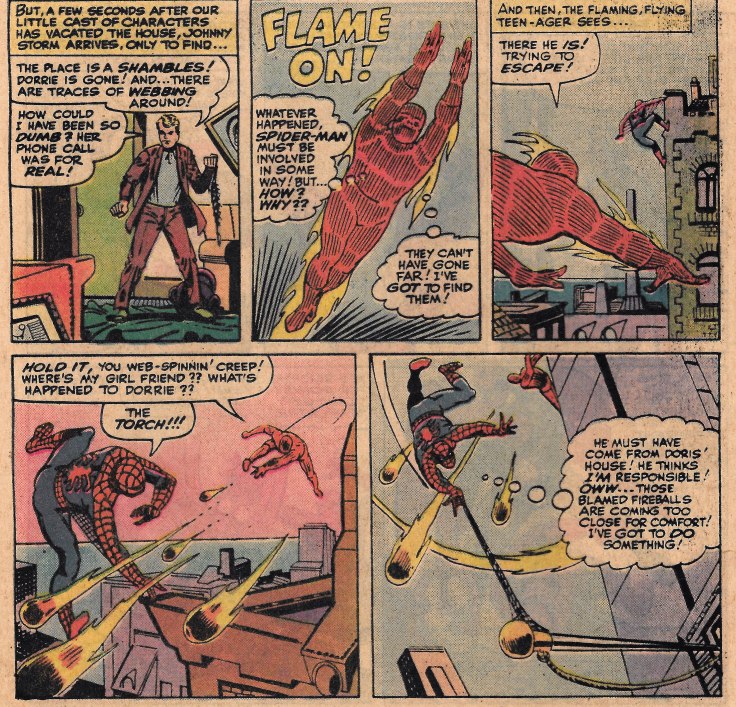 Parker decides the Torch isn’t going to calm down anytime soon and so he lures Johnny in a chase after the true thief of his heart’s desire. At least he does, after a few more panels of battle. And aren't they glorious? 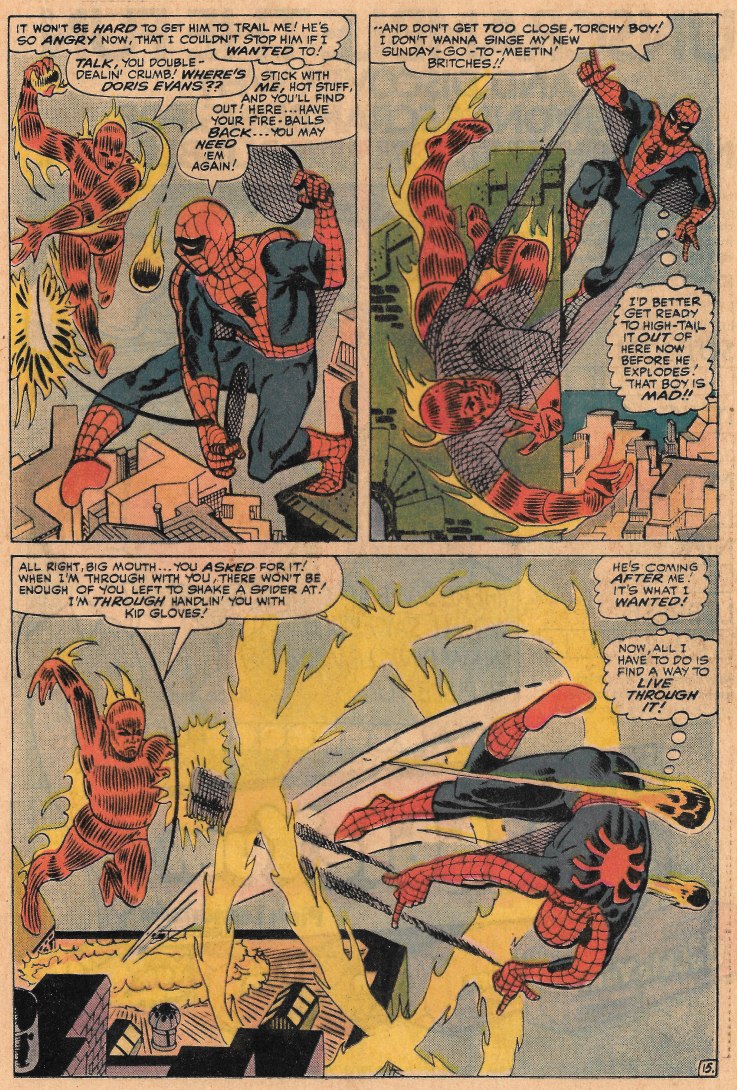 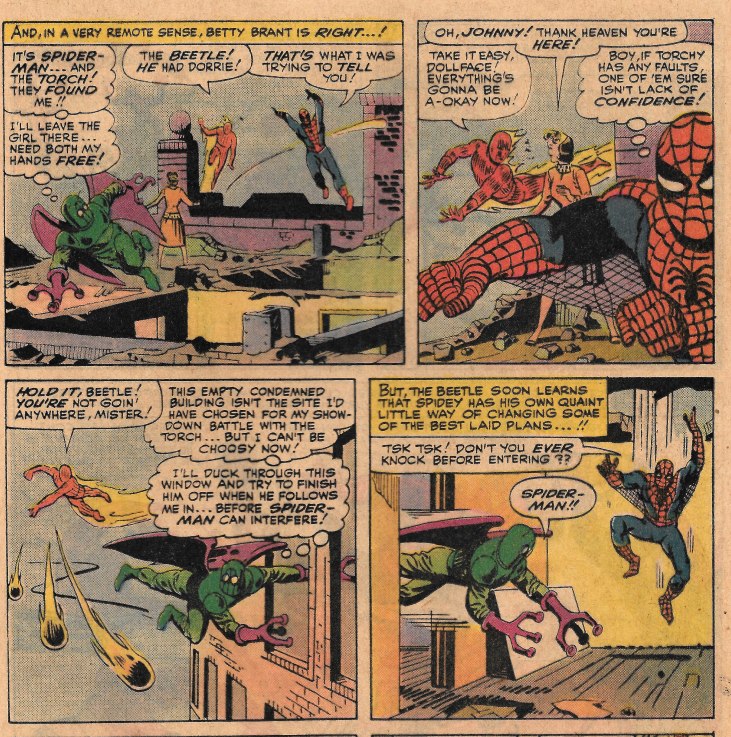 …his capture is almost immediate… 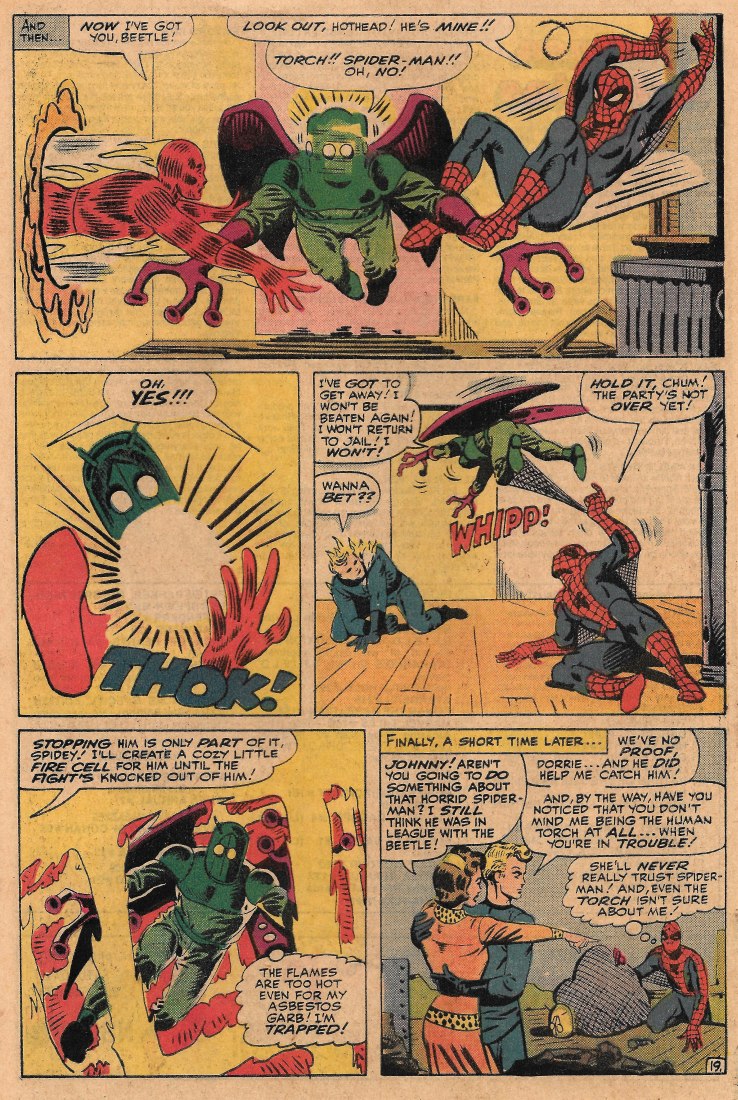 …although Doris sees Spider-Man as a menace to rival the Beetle. It end as usual, Parker moping and in trouble with his girl of the moment. 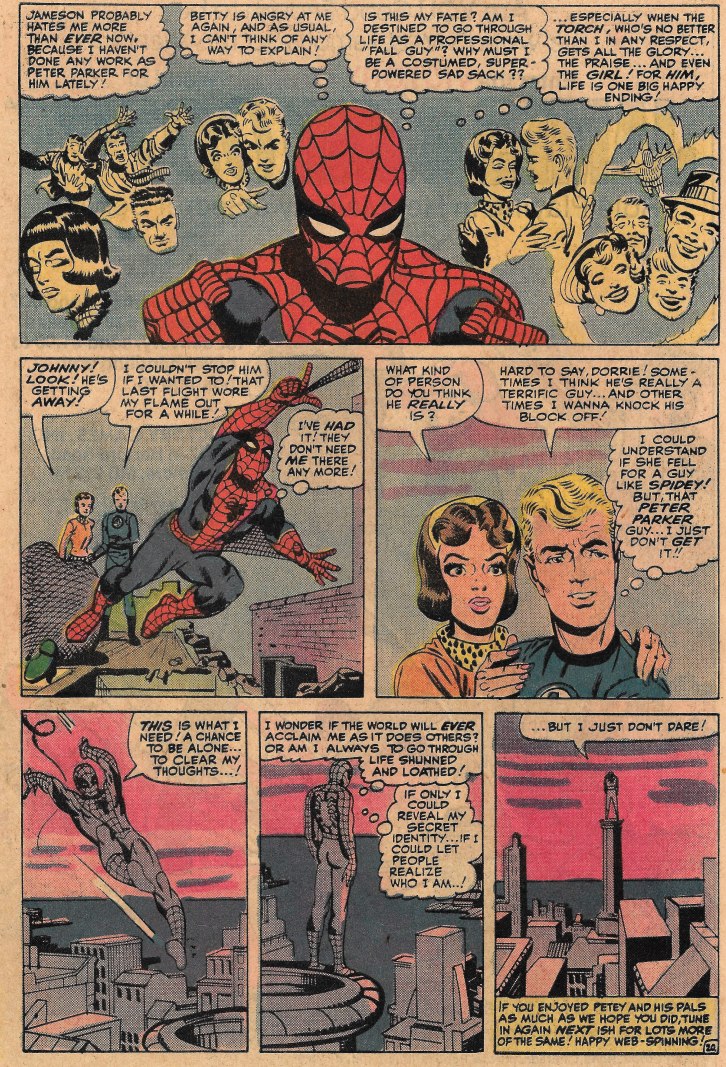 Poor fella, can’t catch a break. Even in re-runs.
Posted by SonOfCthulhu at 2:24 AM