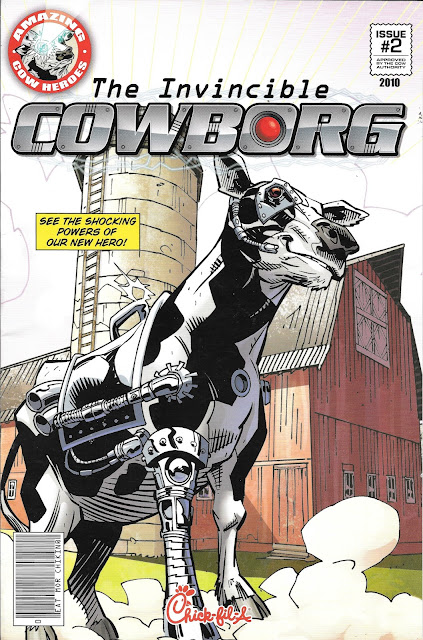 A comic designed to make us want to “Eat Mor Chikin”

I’ve been eating Chick-Fil-A sandwiches since I was in grade school. 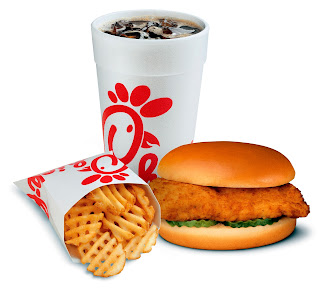 The nationwide chain started as the Dwarf Grill in the mid-1940’s in the Atlanta district of College Park, Georgia specializing in fried chicken sandwiches. Why an already breaded breast of chicken would still need to be wrapped in buns is beyond my meager abilities to understand, but the result is a sublime, if uncarb friendly delight. Typical Chick-Fil-A sandwiches contains no added toppings aside from two tiny pickles, whose tart goodness can be enjoyed with or without the sandwich.

The original restaurant was located near a Ford Motor Company assembly plant, the source of a growing number of patrons. Fast forward to the year of my birth and you find them opening their first branded Chick-Fil-A in Greenbriar Mall, a strategy they would use to expand into many new territories. It wasn’t until 1986 that the chain introduced its first freestanding store, the location of which was back in the hometown of Atlanta, Georgia.

I’ve been on a bit of a self-imposed Chick-Fil-A exile for the past several years now. The reasons for it are three-fold.

First off is the company bills itself as an extension of its founder Truett Cathy’s Southern Baptist beliefs. While for years I thought that stopped at the restaurant being closed on Sundays, Thanksgiving and Christmas, recent press has dug up the ties the Cathy family has to certain organizations that target and discriminate against people in the LGBQT community. It is JUST as distasteful to me to believe my dollars are helping fund the Family Research Council or the Marriage & Family Foundation as those little chicken sandwiches are tasty.

Secondly, since my diagnoses of Type 2 diabetes ten years ago, I’ve done my best to limit my carb intake per meal to a preset maximum, making a meal with double breading on the main course a hard thing to balance. Yes, I know they have a grilled option, but no, I am certainly not choosing it. And those waffle fries of theirs is pretty tempting as well. 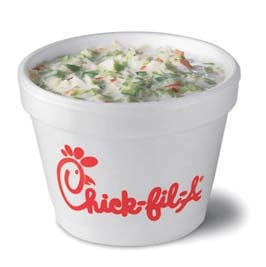 Third and probably most damning is the fact that they removed cole slaw from the menu. I’m a devout fan of cole slaw and Chick-Fli-A’s was a really grand combination of cabbage, carrots, and whatever is in that magic vinaigrette.

Speaking of odd-ball ingredients, what we have here is the prize from one of Chick-Fli-A’s kids meals. One of five books of cow-based superheroes, these books were given away with the purchase of a kid’s meal back in the winter chill of 2010. 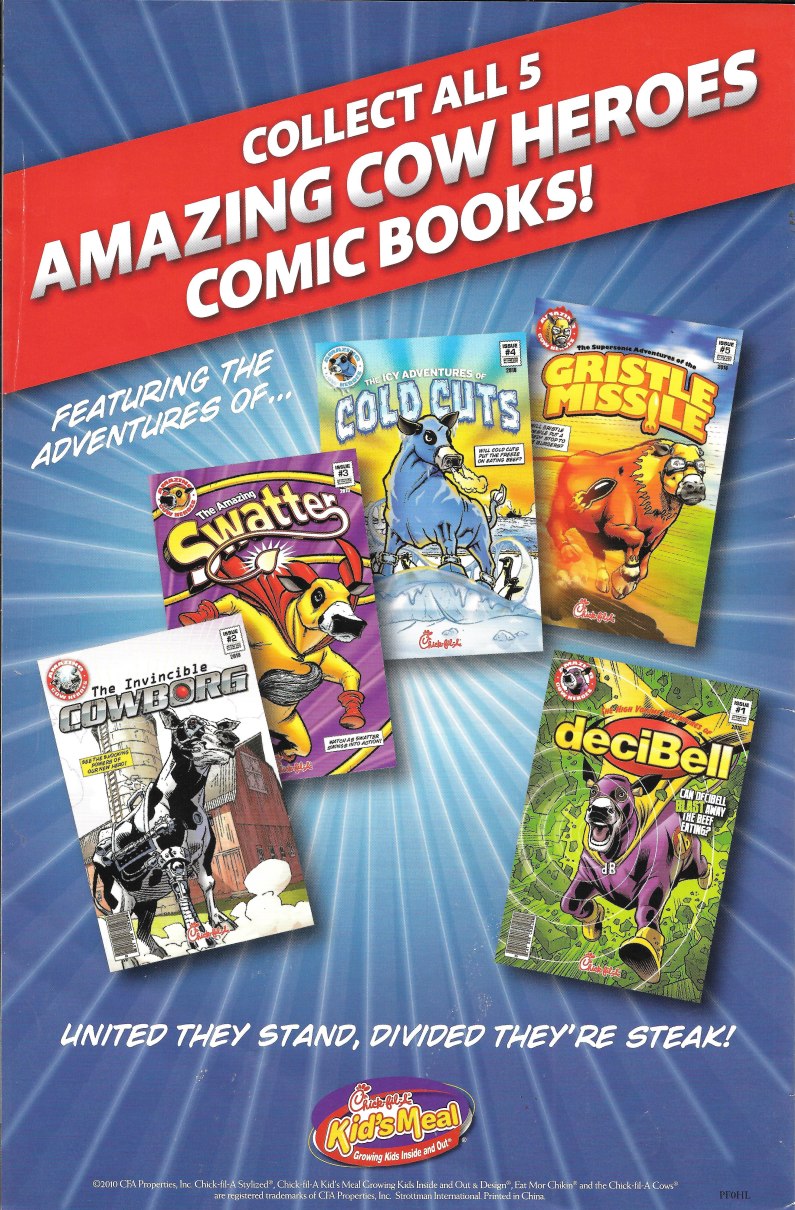 I believe that I only have the Cowborg issue as the “Grisstle Missile” one didn’t survive the trip home from the restaurant. Sadly I never caught what looks to be the most interesting of these five: “Cold Cuts.” The thought of a cow with Iceman powers makes my imagination bubble over.

This issue saw the introduction of first-time writer Jerry Silvestrini, who I think did all of the Chick-Fli-A comic titles. Silvestrini is an Atlanta native, who worked on some of the other kid inserts for the restaurant chain and he acquits himself well for the silly concept contained within this cover. Our artist is Dan Panosian, out of Marvel and Image, who also created the springboard for Dreamwork’s Kung-Fu Panda movie. 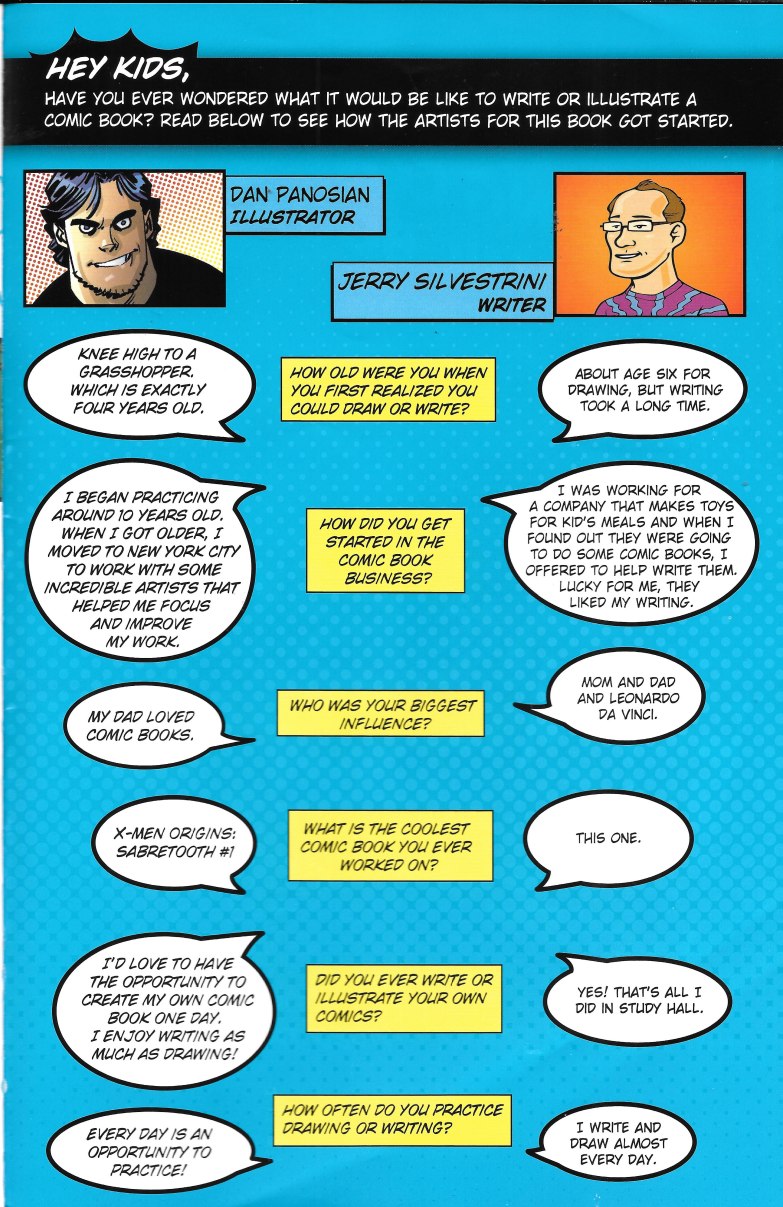 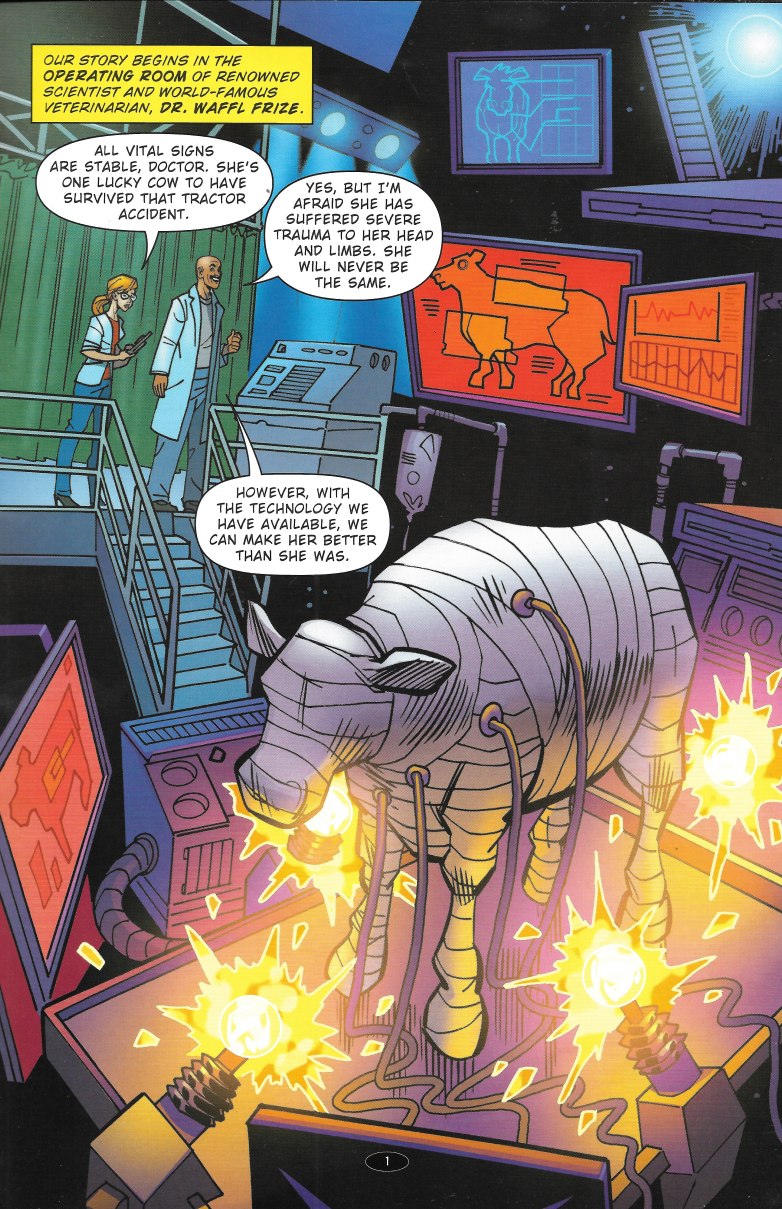 We begin with an origin story, because what superhero doesn’t have an origin story. Appears our bovine pal has been severely injured although the ‘how’ is not for this book to speculate, and is now trussed up like a cow equivalent of Frankenstein’s monster. Playing the good Doctor’s part is world famous veterinarian Dr. Waffl Frize. Already this story is making me hungry.

Frize does the old ‘Six Million Dollar Man’ plot, but subbing in parts from a mechanical bull, instead. Gilley’s will be mighty upset, is all I’ve got to say. 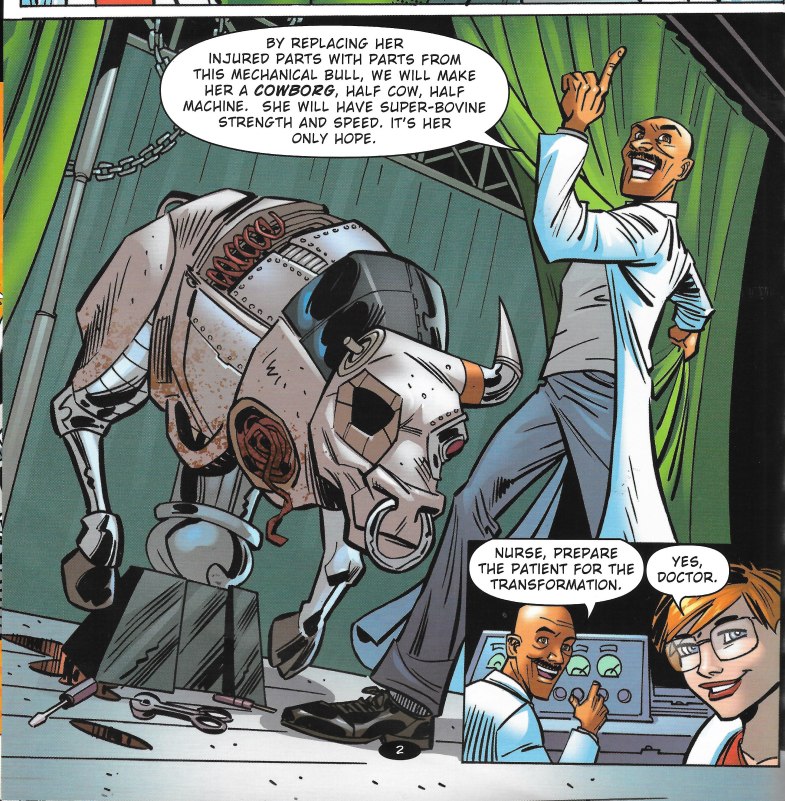 What we end up with is this sort of three-way cross between Justice League’s Cyborg, Iron Man’s armor and a cow. 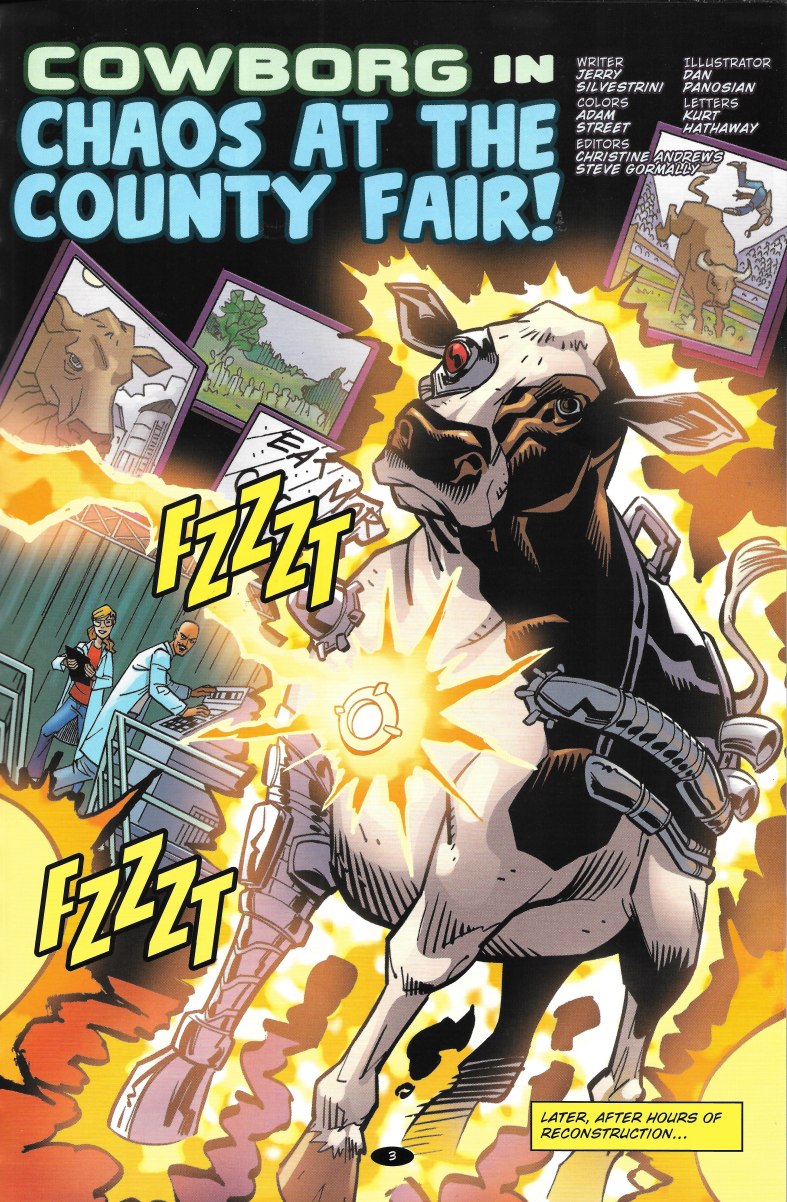 Dr Frize, instructs Cowborg in the ways of her implants, forcing her ‘beyond the limits of ordinary cow-ness’ (emphasis his) so they can ‘change the world and make it a better, safer place for cows. A place where people will eat less burgers and more chicken!’

And cue dramatic rise in music and training montage… 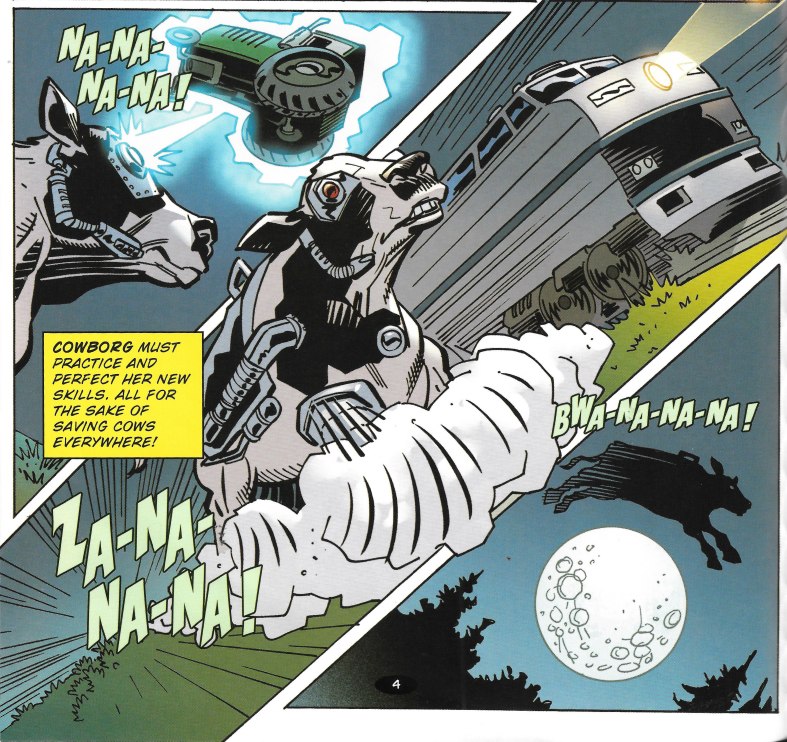 Good, good. Liking the faster than a speeding locomotive mixed in with the cow jumped over the moon imagery. What next? We have awesome cow super hero, where is dastardly cow super villain? All in good time, I suppose. First brief trip to the county fai…oops! Guess not! 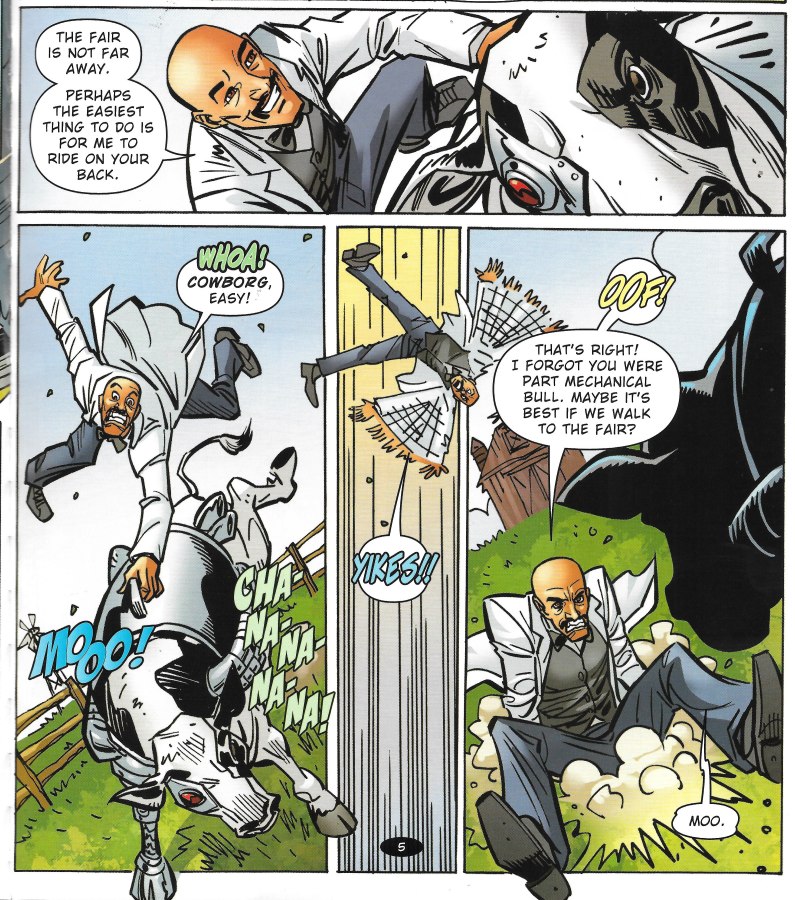 If you haven’t notice by now, I’ve given myself over to the lunacy of this book. Panosian’s art works in a silly juvenile way without being crude or unfinished. Silvestrini’s story trots out the right amount of absurdity and good-natured fun so this doesn’t grate. I found myself after this point allowing the book to win me over. Is it dumb? Yes, but sometimes a comic can be dumb and FUN.

The next page even contains product placement, but I’m so far gone, I let that slide right on by. Plus they are letting Panosian have some fun doing full page spreads here, so why not. 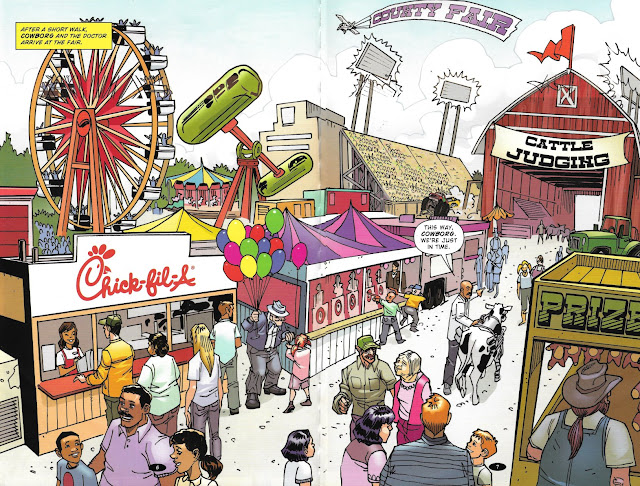 Cowborg gets entered into the livestock competition. 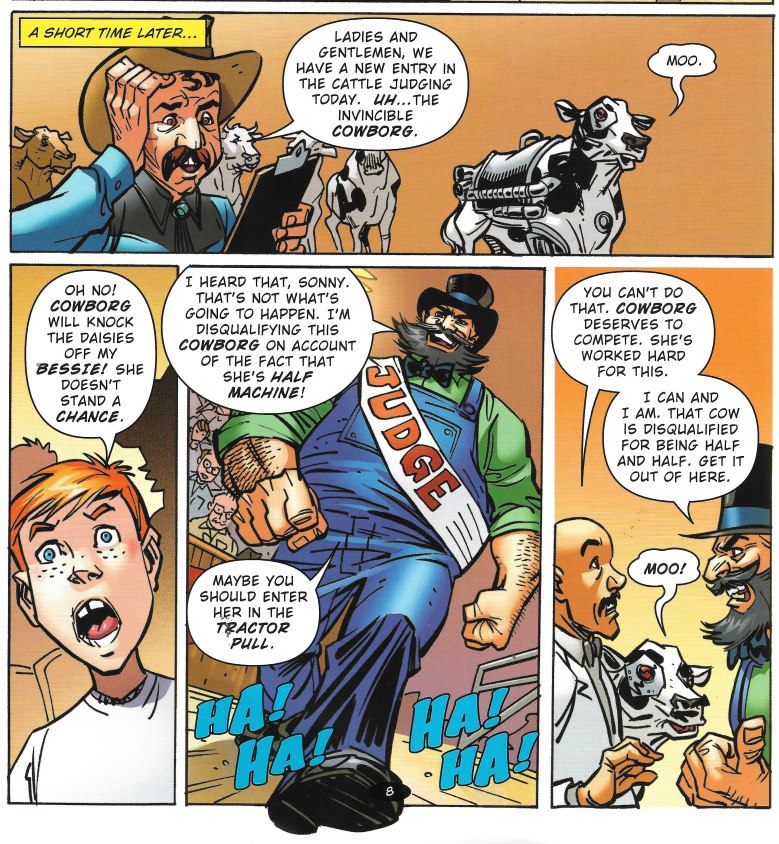 Remember me asking for a super-villain a few pages ago? Well meet The Judge, our “thick around the middle” beef-eater. He’s got a side deal going with the local butcher and the cows in this competition are going to be put out to pasture. Just not in a REAL pasture.

For his first act of evil, the Judge rules all the cows unworthy of competing. Which upsets quite a number of the fairgoers. 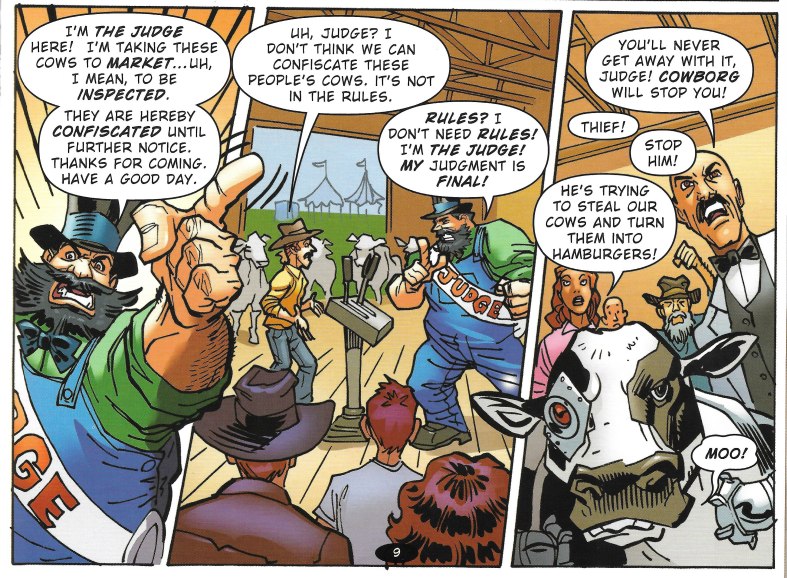 Next, the cow-fiscates every heifer there for the express purpose of “inspecting” them, which we all know means he plans on having a biiiig cook-out. And not FOR them but USING them. Lucky for everyone Cowborg is there!

However, the bovine hero isn’t fast enough to stop the Judge from initiating his complicated plan. The floor drops down and slides the rest of the heifers to a loading dock below the stage. At the same moment, the ferris wheel breaks free of its moorings and rolls away. 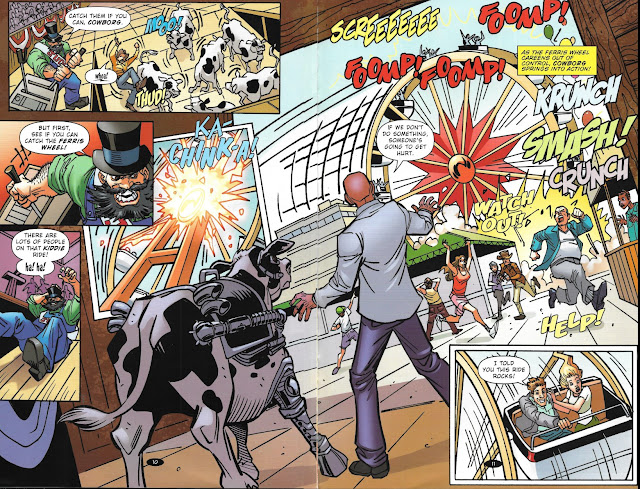 But with luck and a little eye beam action, Cowborg has that wheel right as rain in an instant. Now on to finding the Judge! 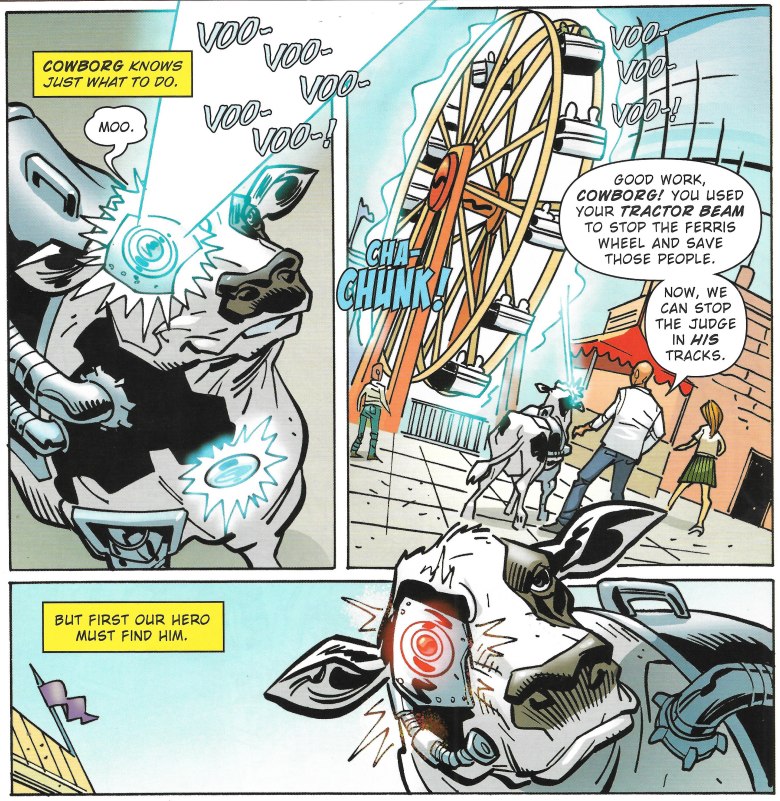 Still trying to figure out what “engage nose” does. 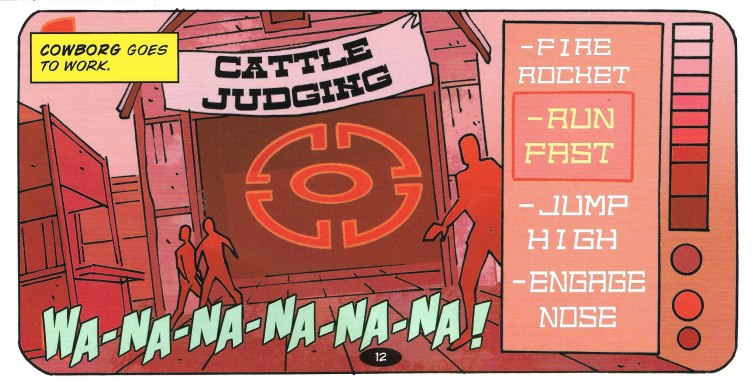 Anyway, Cowborg gallops off and locates the Judge, the hostages and the future steaks in a quick jiffy. 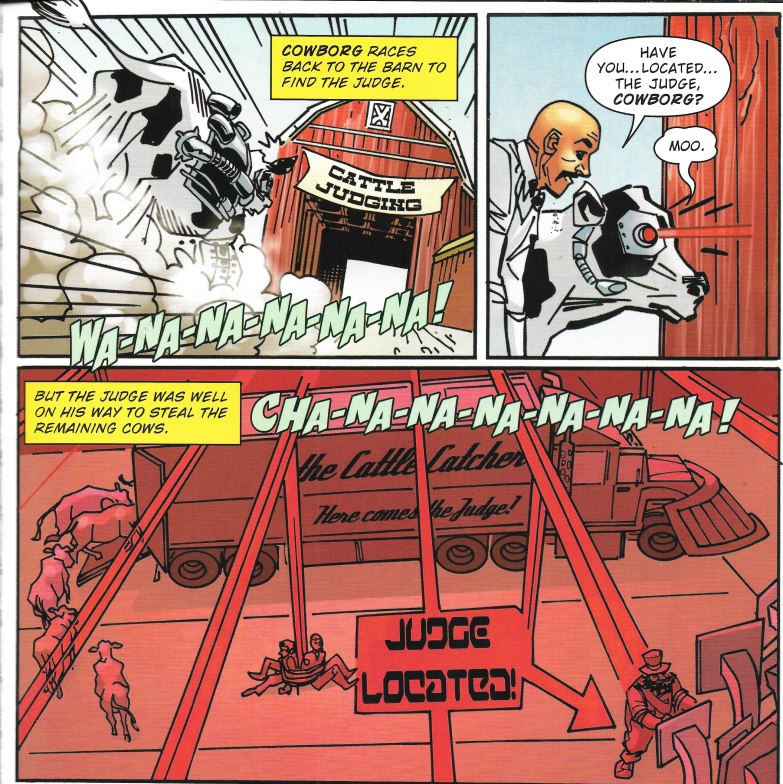 So the Judge throws a runaway monster truck at them, which Cowborg also stops in the nick of time using her Iron Man approved chest beam. However, this allows the Judge time to complete loading the cattle into his semi and off they go. 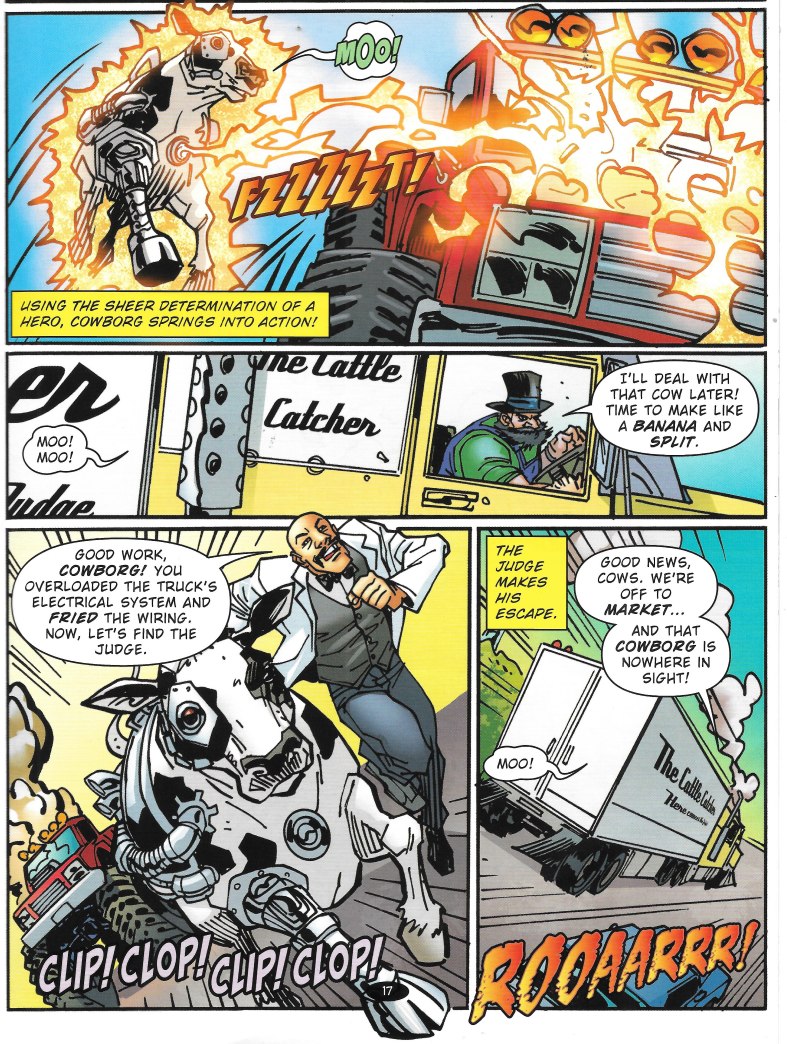 Still having hostages to free, Cowborg rescues the ranch hands and the makes off like a bullet after the Judge’s moving meat wagon. 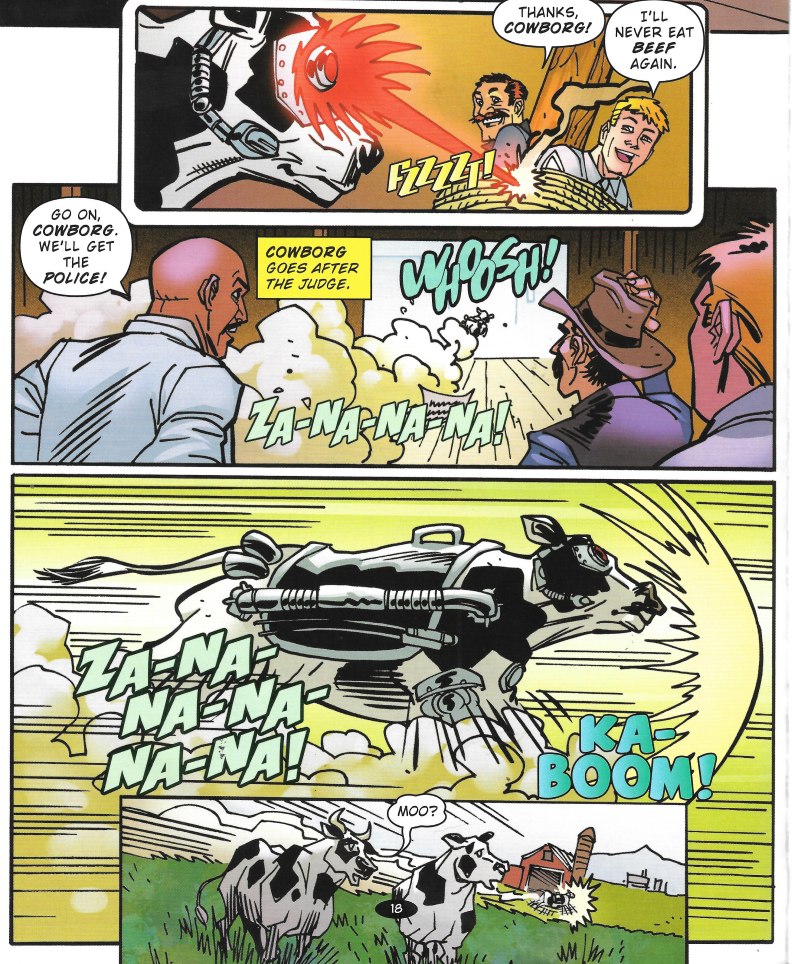 She stops the Judge cold and breaks out the livestock. Three moos for Cowborg! 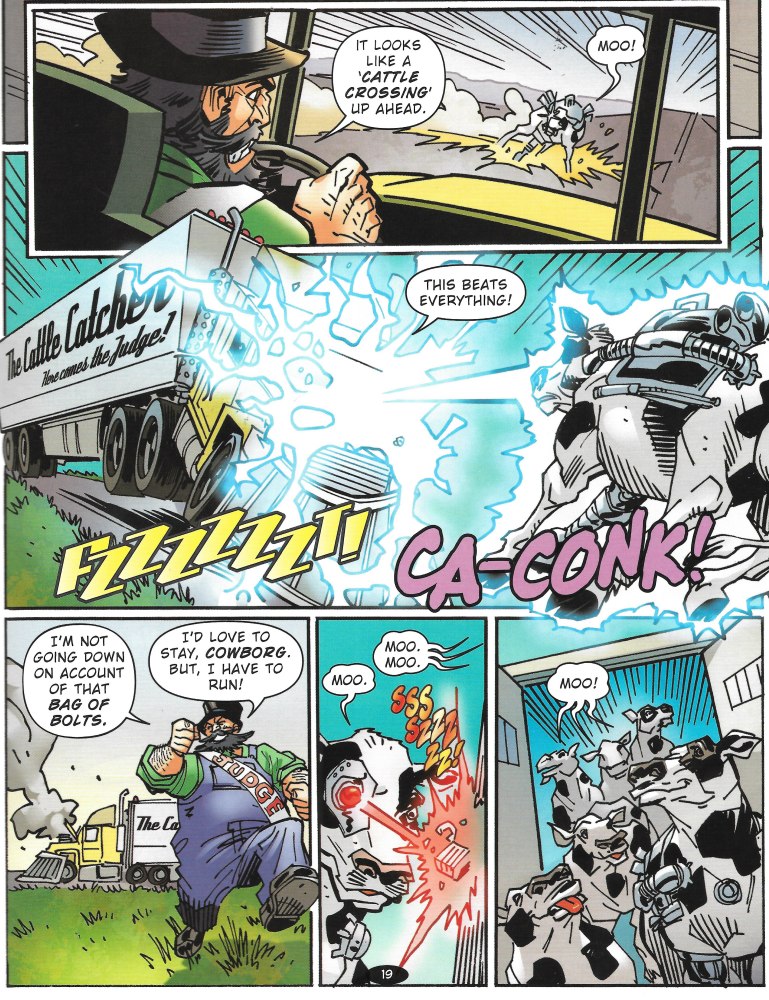 But wait! We can’t let the villain of our piece get away. Cowborg snags him with a tractor beam and into the hands of the police he goes. And with that our tale has ended. 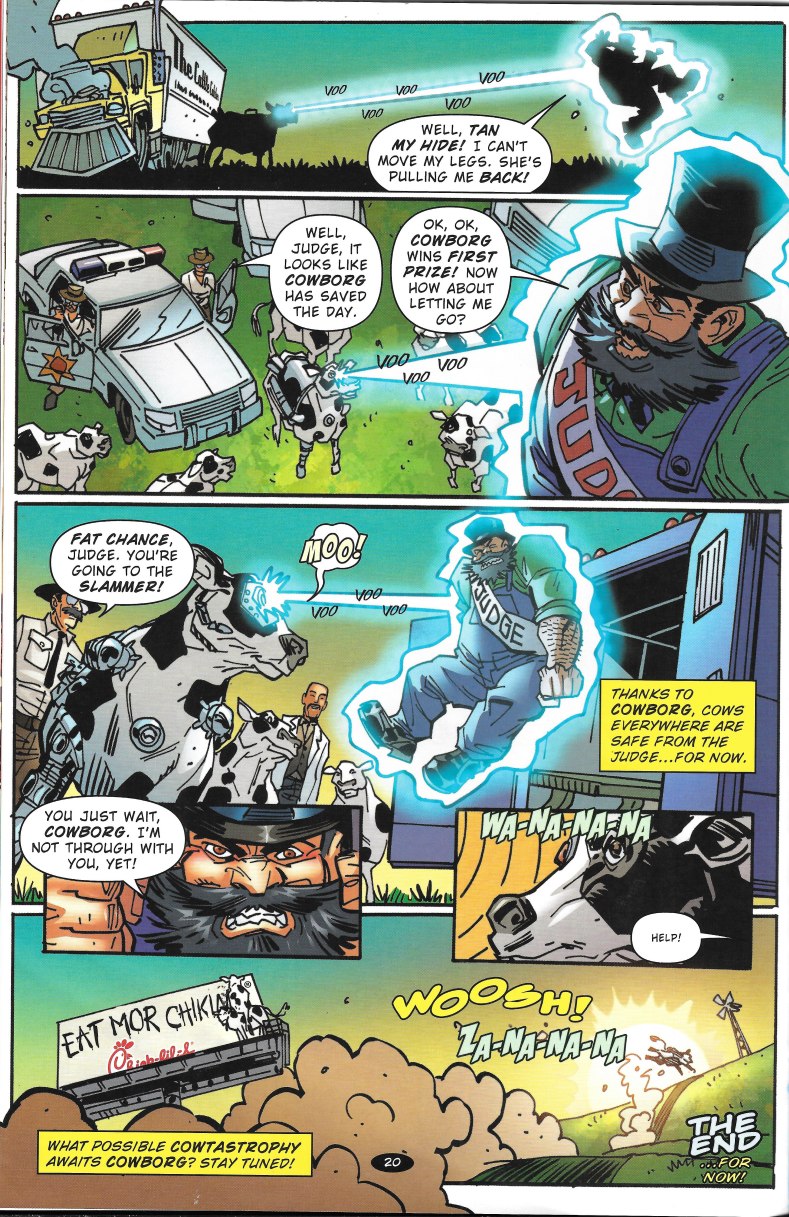 Silly. And to go against type, I can read and enjoy silly things sometimes. Possibly a bunch of the credit for me liking this goes to Dan Panosian’s art. He does goofy just right, from the setting, characters, and action sequences. Jerry Silvestrini doesn’t take any risks here, playing the story out in a straightforward manner. As such it reads like a kid’s adventure book and that’s enough to make it a fun read.

If I come across others, I’d read them. Especially to my granddaughter, who would greatly appreciate a story about a hero cow.
Posted by SonOfCthulhu at 3:37 AM