Some random Spider-Man books, Part 6
This was not the comic about a superhero drug obsession promised by the title, 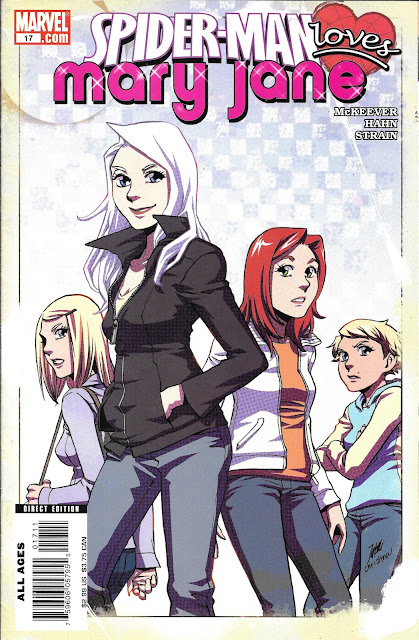 This book takes the Spider-Man characters as they existed right when he first got his powers in high school and tosses them into a blender with a TV soap and a Japanese Manga. The result comes out way better than I expected, or at least this issue does.

Spider-Man Loves Mary Jane focused on Mary Jane more than Spider-Man, while leaving plenty of time to linger on the other girls in Peter Parker’s inner circle. It felt like a grown up Archie book, or kind of what I imagine those new Archie comics must be like. The ins and outs of this particular social circle made up the heart of all the spider-titles anyway, and I’m proud Marvel did something outside their heroes punching stuff zone to devote an entire series to this concept.

The book started in 2004 with a miniseries titled simply Mary Jane that garnered a successful follow-up miniseries Mary Jane: Homecoming. The unlimited series began shortly thereafter but stopped after 20 issues. This entire run saw only one writer (McKeever) and two artists (the first being Takeshi Miyazawa, who does covers here, the second being Hahn). A season two mini came out in 2008 with a different writer and artist.

McKeever is the same guy behind The Waiting Place, a relationship book that I have a few issues of floating in the Crapbox. More on them later, I suppose.

The book is not canon, which is fine. I see it as an exercise of putting all of the girls that have ever been in Spider-Man’s life in a high school setting and just watching how they interact. It feels very soap-operatic and inconsequential who ends up with who. You get that “partner swap” feel which is where the only action in the series occurs. It’s a fun break from all the punching, in a way. 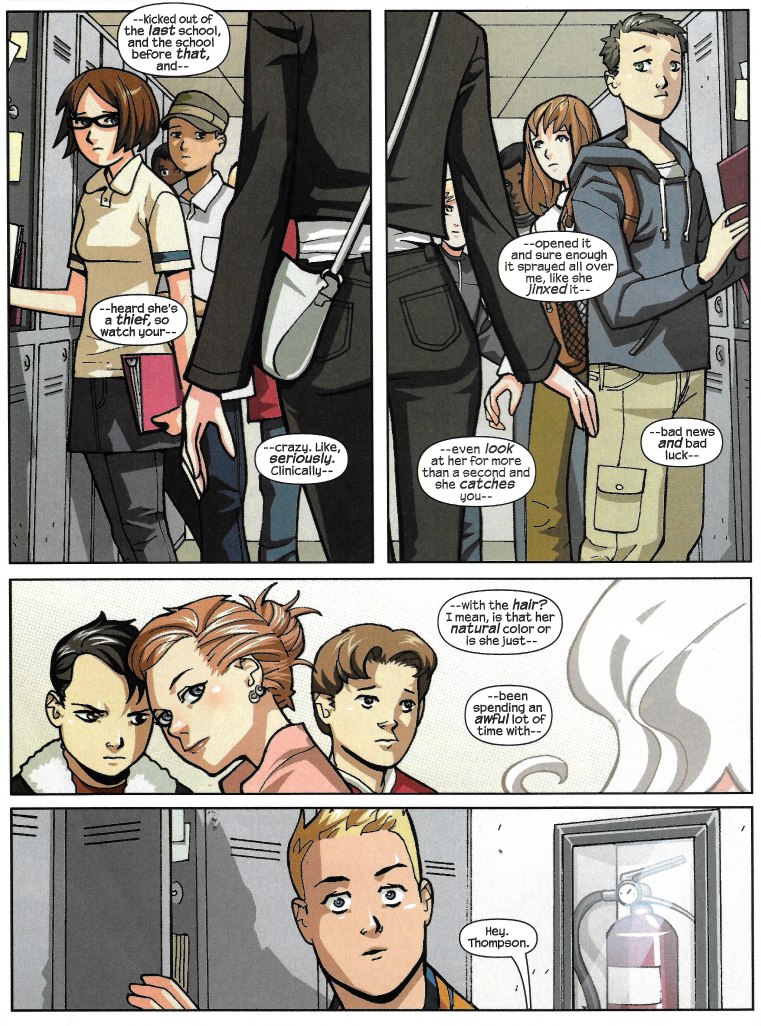 Take how we start here with Felicia Hardy, sans any mention of being the Black Cat, starting at Peter’s high school. She walz’s in under a dark cloud of rumor and mistrust, her mind occupied with thoughts of a certain football jock. 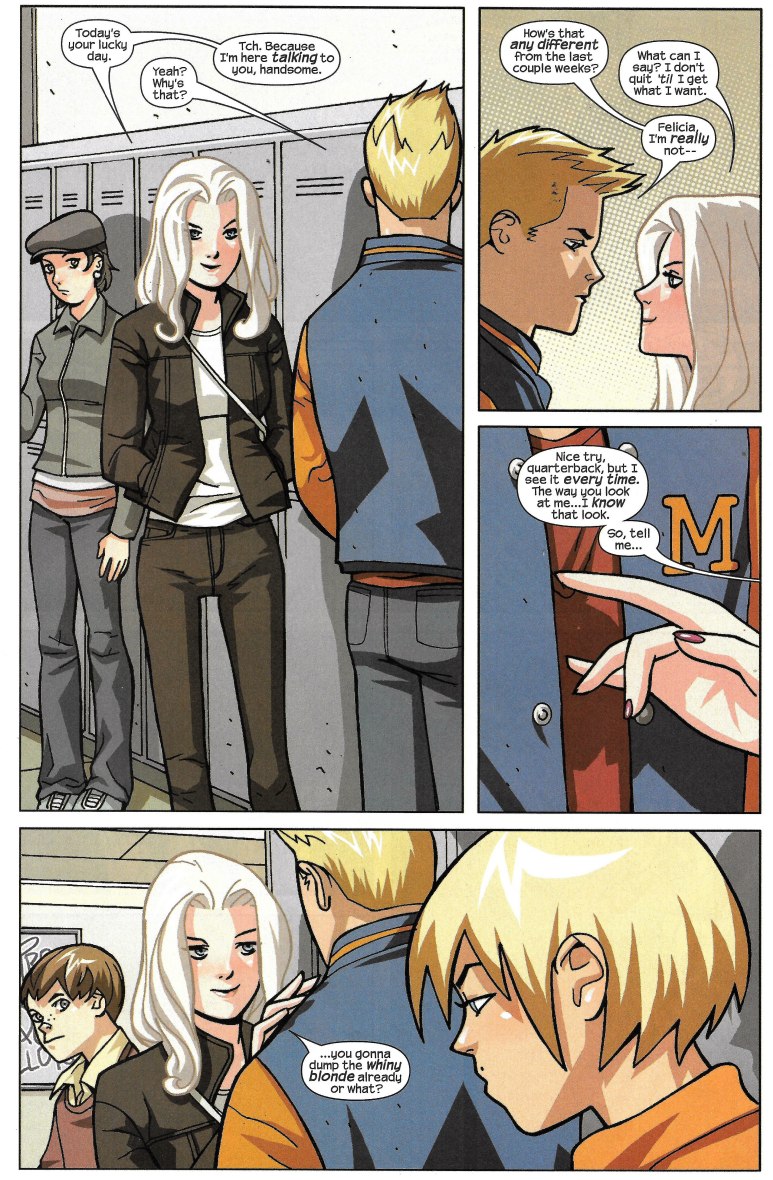 Problem with Felicia’s unasked for advances is that Flash is taken, his current girlfriend being the short haired blonde cheer-squad leader Liz Allan standing in his shadow. Liz and Flash just got back together, so she’s feeling a bit concerned about her place in his life. This leads to her meeting up with Mary Jane at where else but the local malt shop.

Yeah, the Archie irony isn’t lost on me. 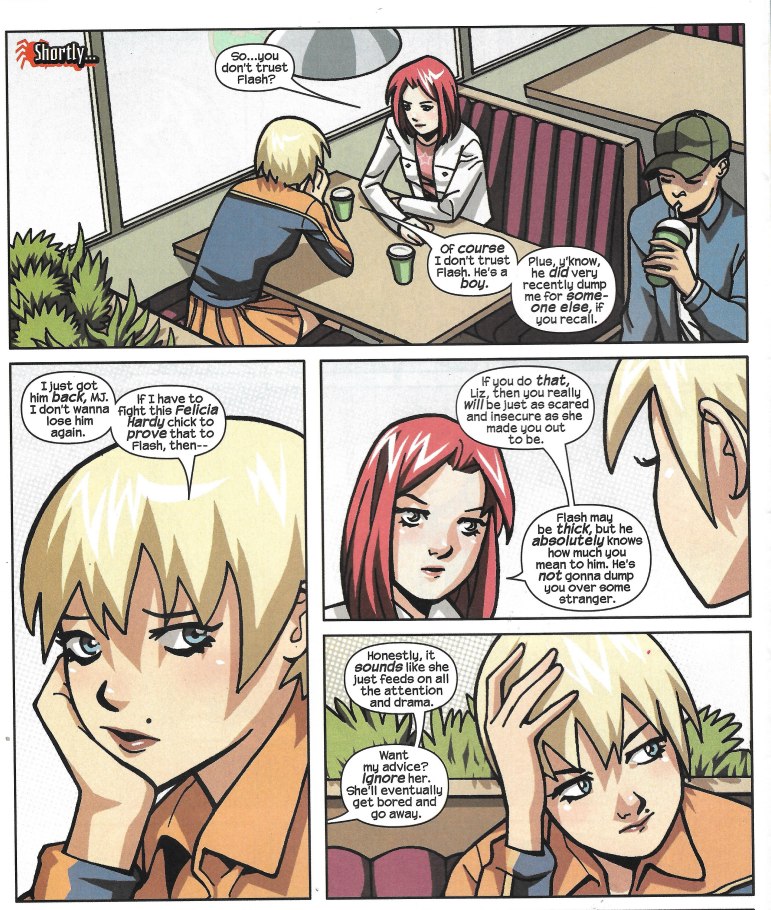 Just then Felicia appears at the end of the table and utters two words: “Or not.”

I’ll get this “thing I have about the art” out of the way. First off, I’m not put off by the manga feel of all this, however it does make for some observations. Varying character models is an important way most artists have of differentiating one person from another. The art style here makes most people’s bodies and faces generic with hairstyle being the defining element. I note that because I don’t believe I’ve ever noticed if that maximum holds true for other “regular” comics. Something I must pay more attention to, for sure.

Then two pages of Spider-Man in action with fellow do-gooder Firestar follow. He captures Paste Pot Pete in one page and, in hindsight, that page fails to hold our interest more than the relationship dramas going on in the rest of the book. Sad how quickly I became roped into this lovey-dovey stuff, but I admit to liking the writing and pacing. 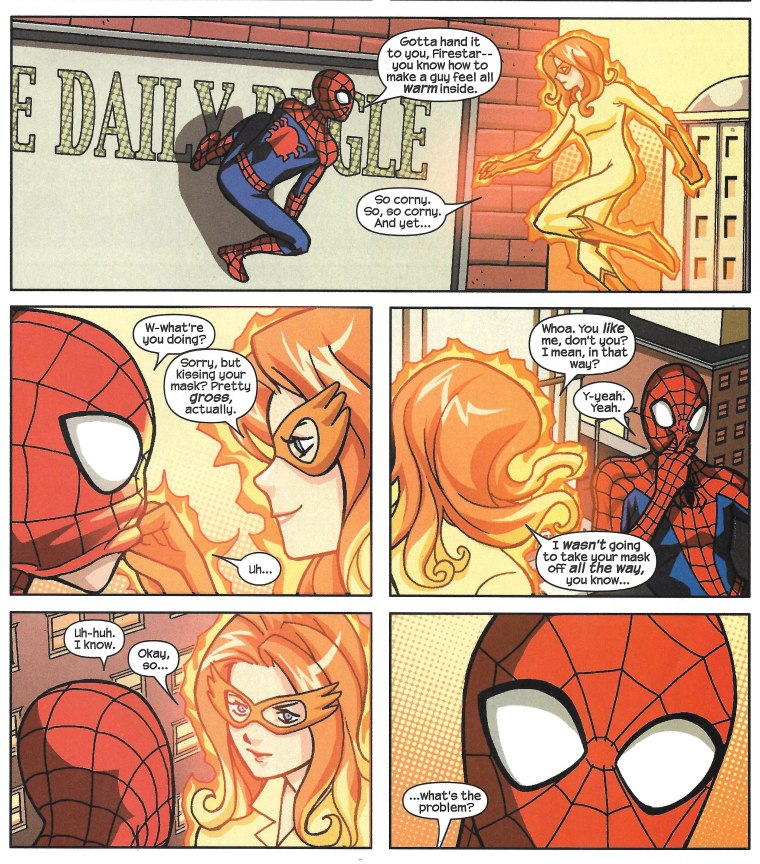 I mean how can battle pics compete with these panels when we know from the frontispiece that Peter has just broken up with Gwen. So will he get with Firestar or won’t he?

Alright call me a traitor to ACTUAL superhero comics, but we know these characters and this is a neat concept to walk them around in.

If you really need fights and stand offs, try this bit between Felica Hardy and Liz. 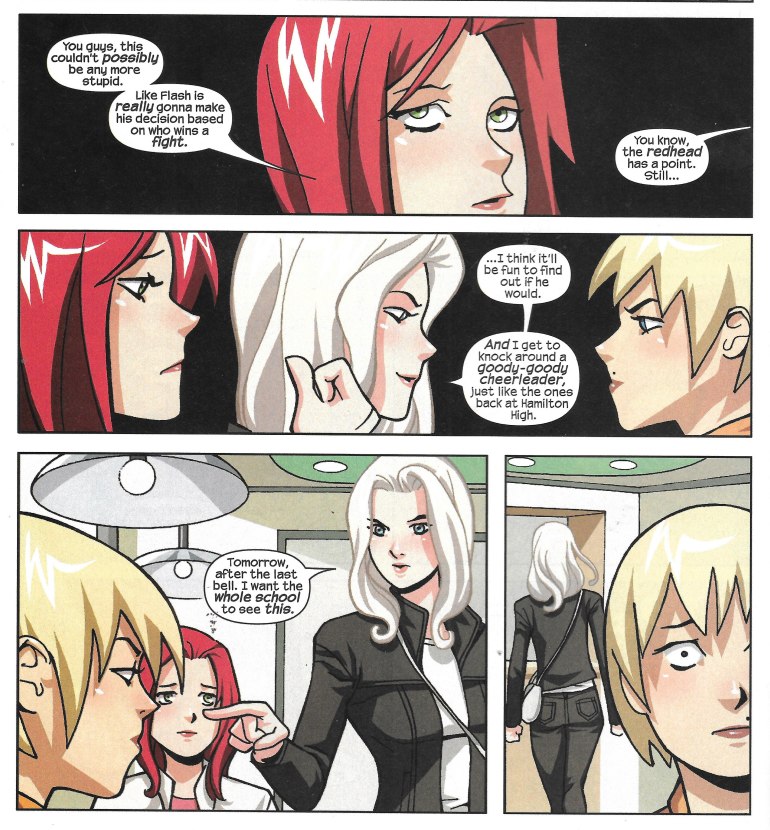 Or Peter approaching a newly broken-hearted Gwen to salvage a friendship. 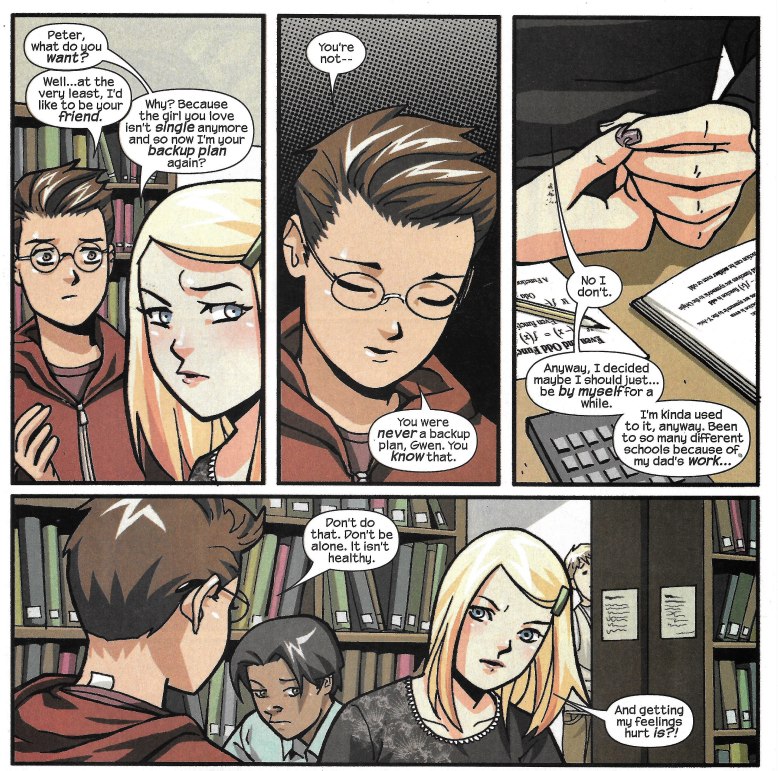 Or watching Peter have to hear Gwen say she needs alone time until she can figure out if they can be friends only for him to walk out of the library and right past Mary Jane, who he left Gwen to be with, walking with her new boyfriend Harry Osborn. 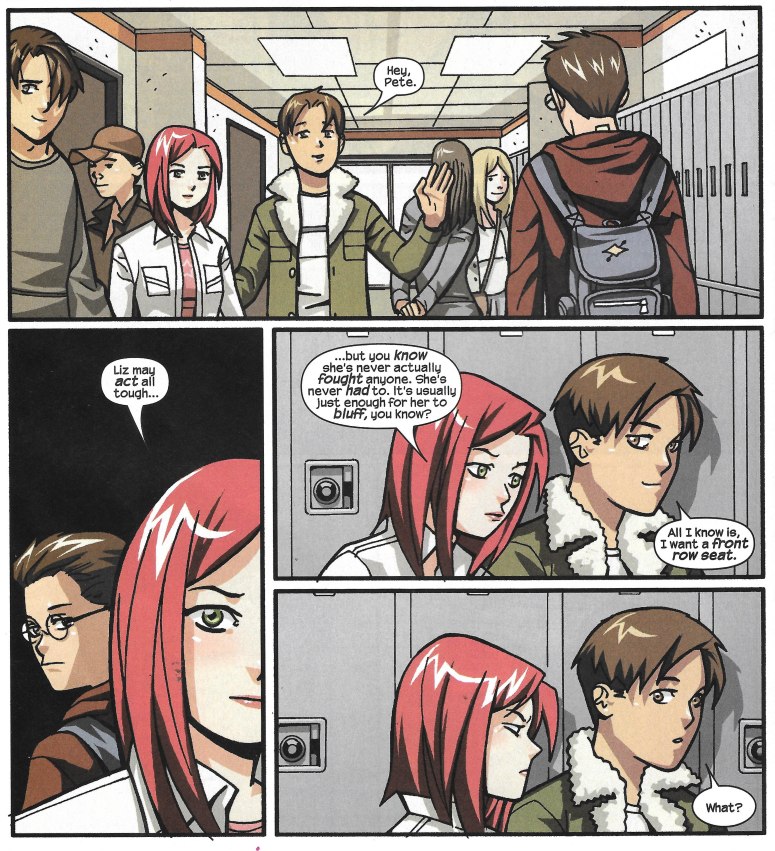 And the discussion about Liz loops us back to her and Felica’s conflict. I’m just saying these books are cool “What if’s” that are extremely fun to read. Just look at how Harry’s “guy logic” is both understandable and at the same time undercuts his relationship with MJ. 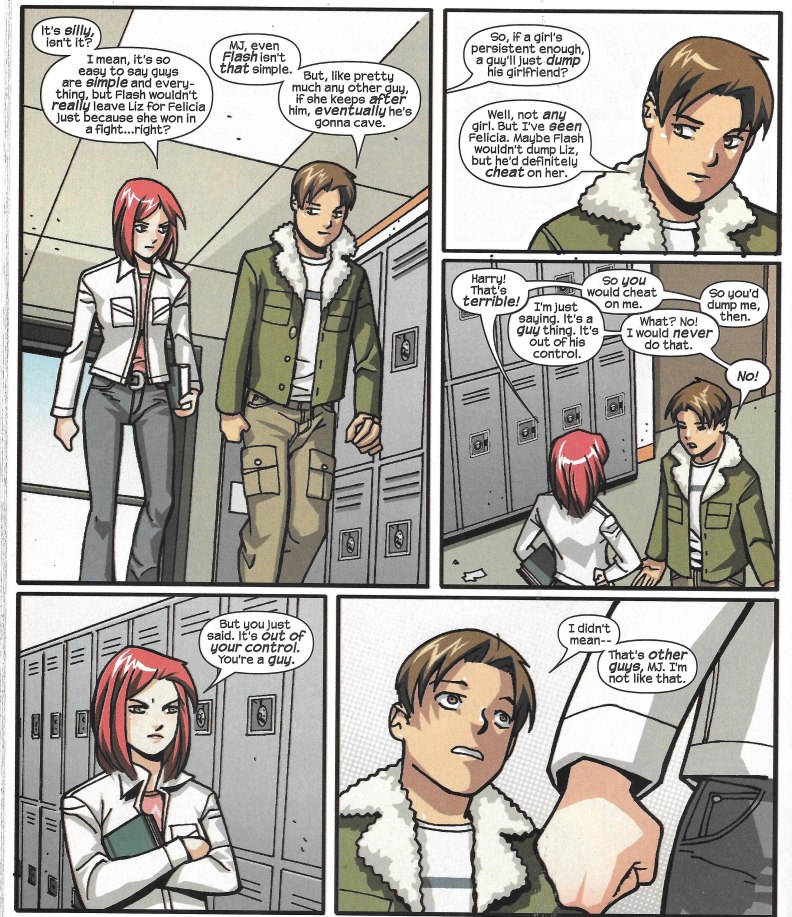 Cut to Liz and Flash on the football field, with Liz being just a bit of bitch to the other cheerleaders. Flash tries his best to prevent Liz from getting hurt. And YES, I see how goofy-crappy-anime they are making everybody and still part of me feels like I’m getting the OTHER story on what happened behind the scenes when Spider-Man was away fighting Doc Ock or someone. I can’t believe I’m liking a book with art like this either. 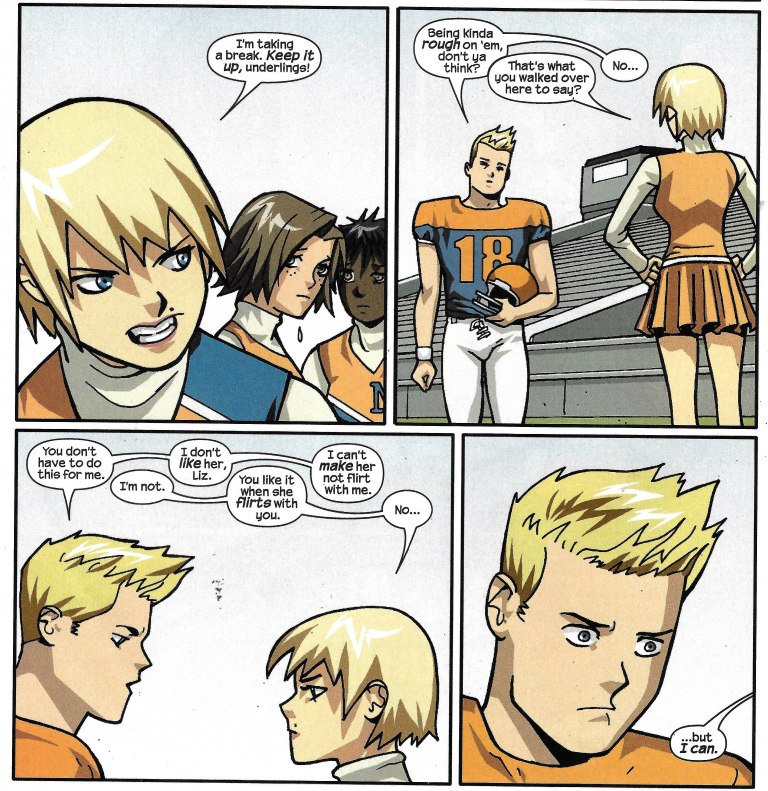 Oh, and if you think she can walk away from this, know that Flash just upped the stakes. 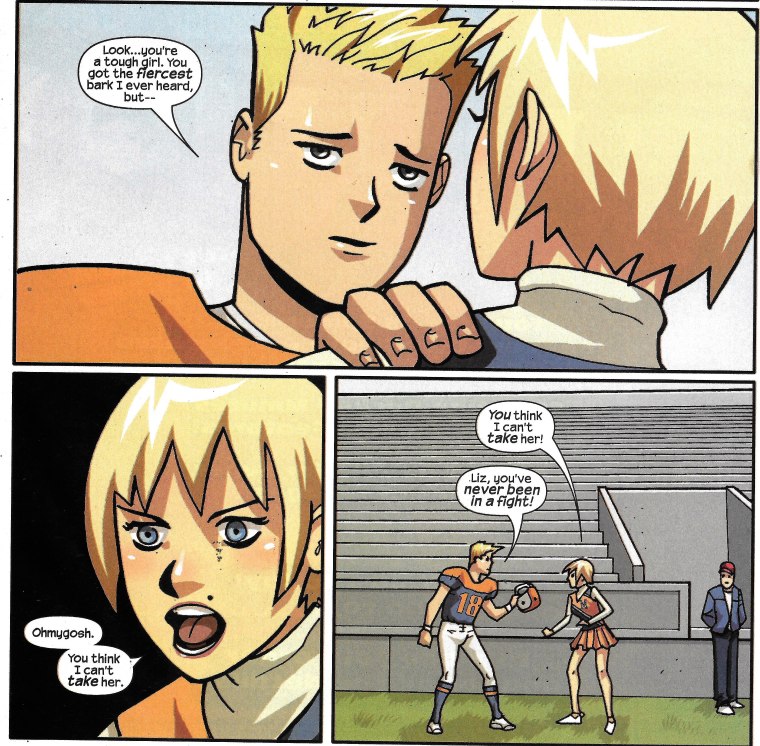 Parker decides to give Firestar a chance to make something other than The Beetle’s armor smolder. 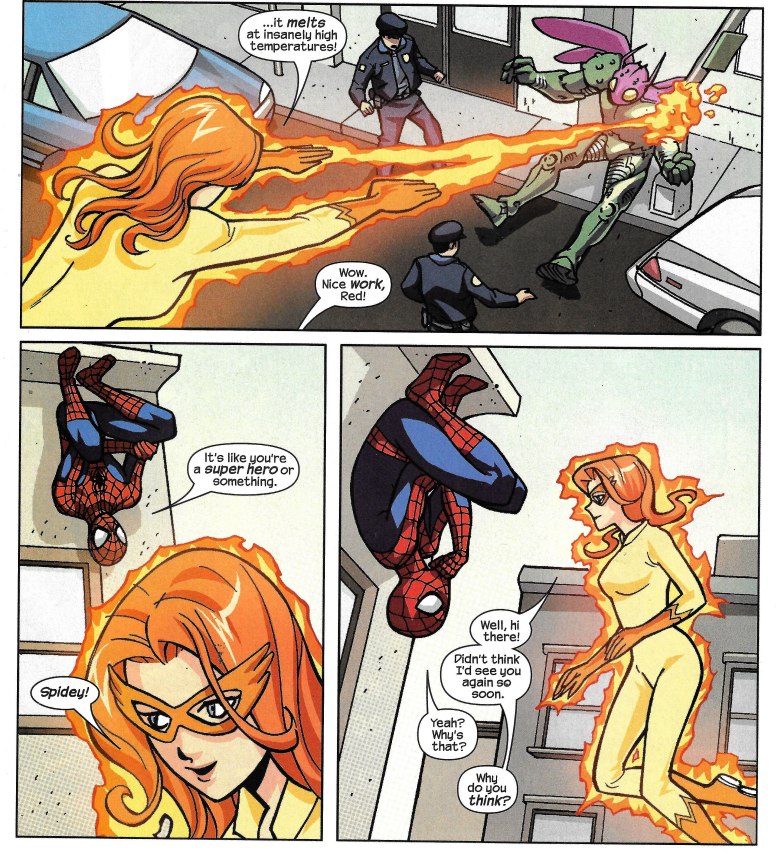 He starts a conversation that works its way back around to… 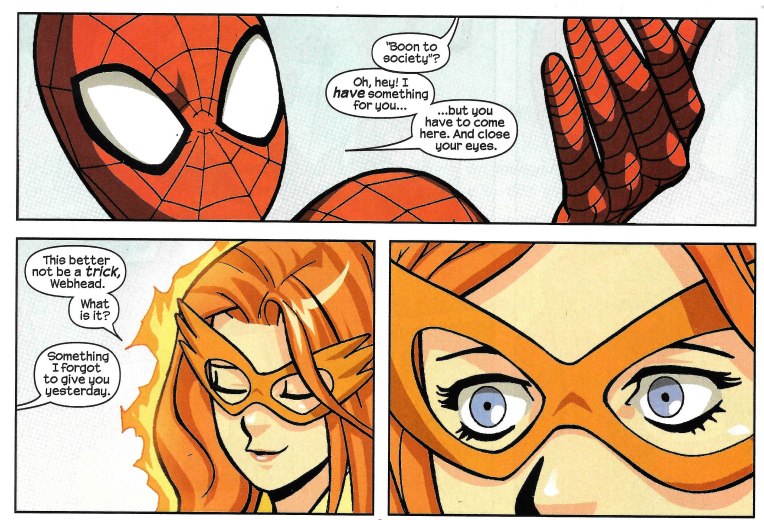 … well, see for yourself. 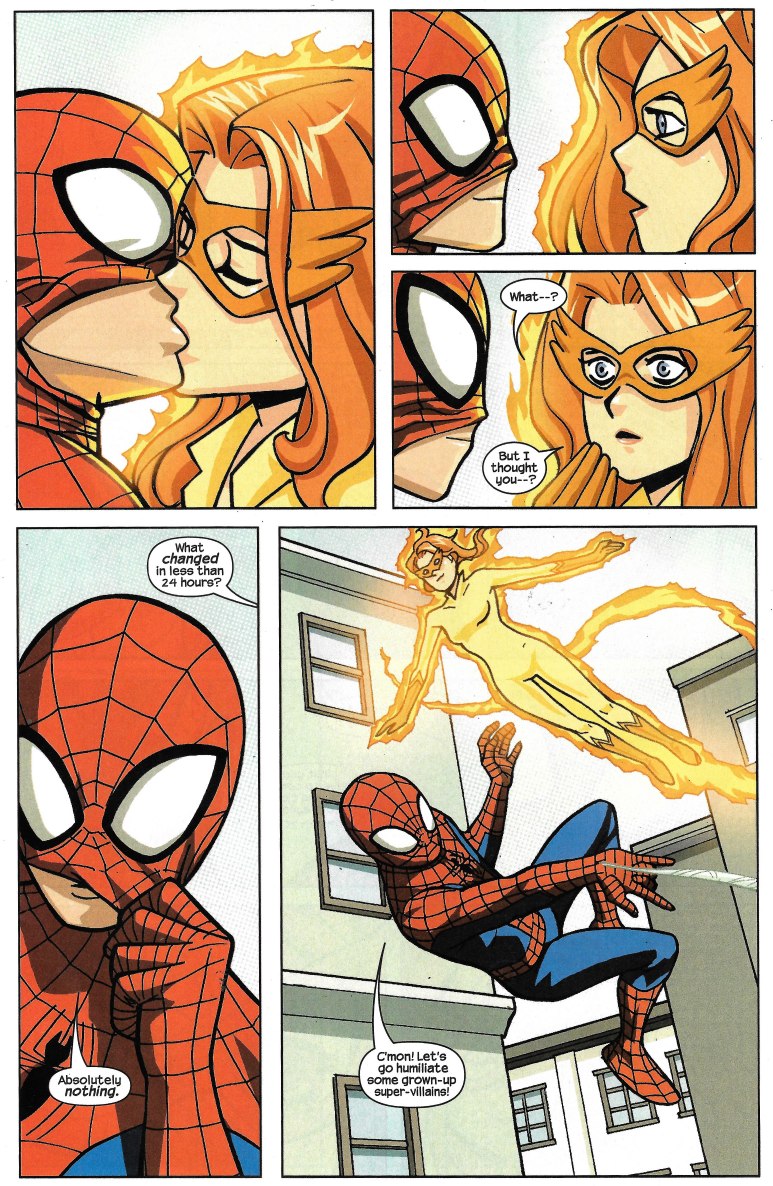 Which leads us back to that bout between Liz and Felicia, with Felicia calling an early victory. 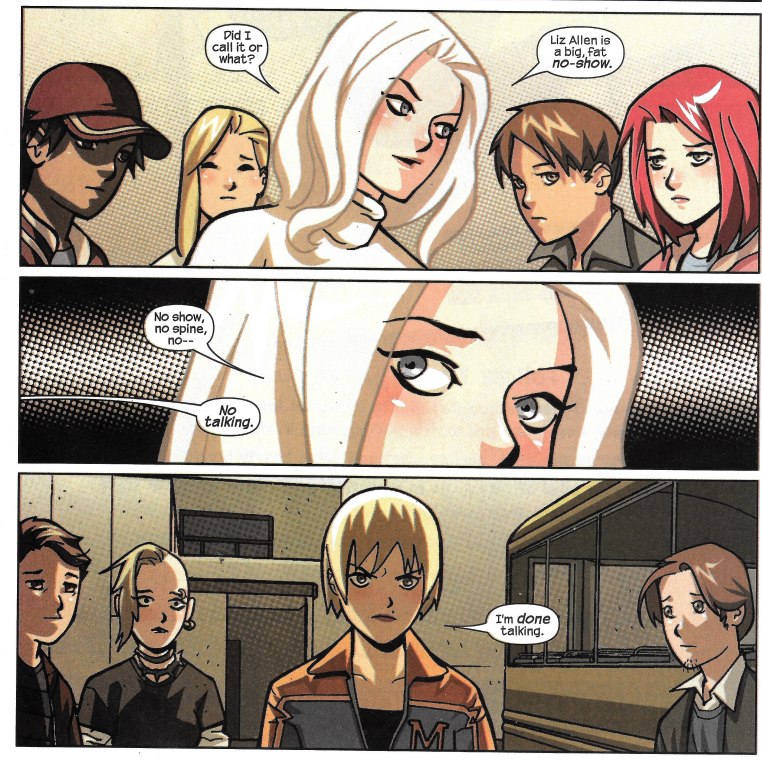 But after Liz shows up, Felcia makes a quick back step and gives up, although doing her best to insult Flash and, by association, Liz. Looks like she’s asking for a pop in the kisser, which is exactly what Liz goes to give her… 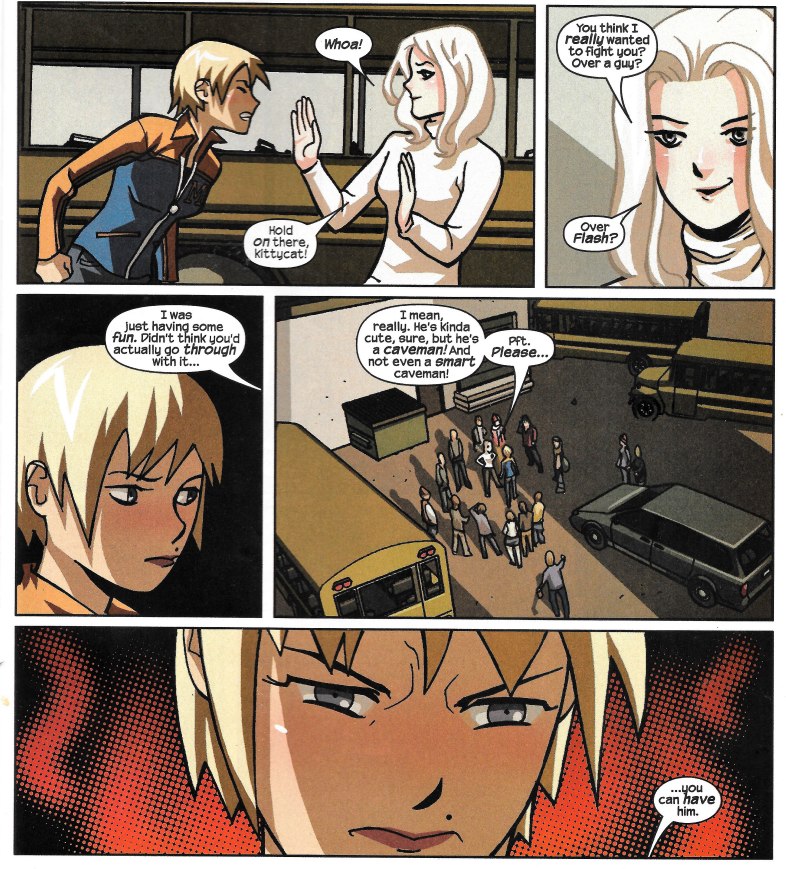 …until MJ steps in and prevents it. 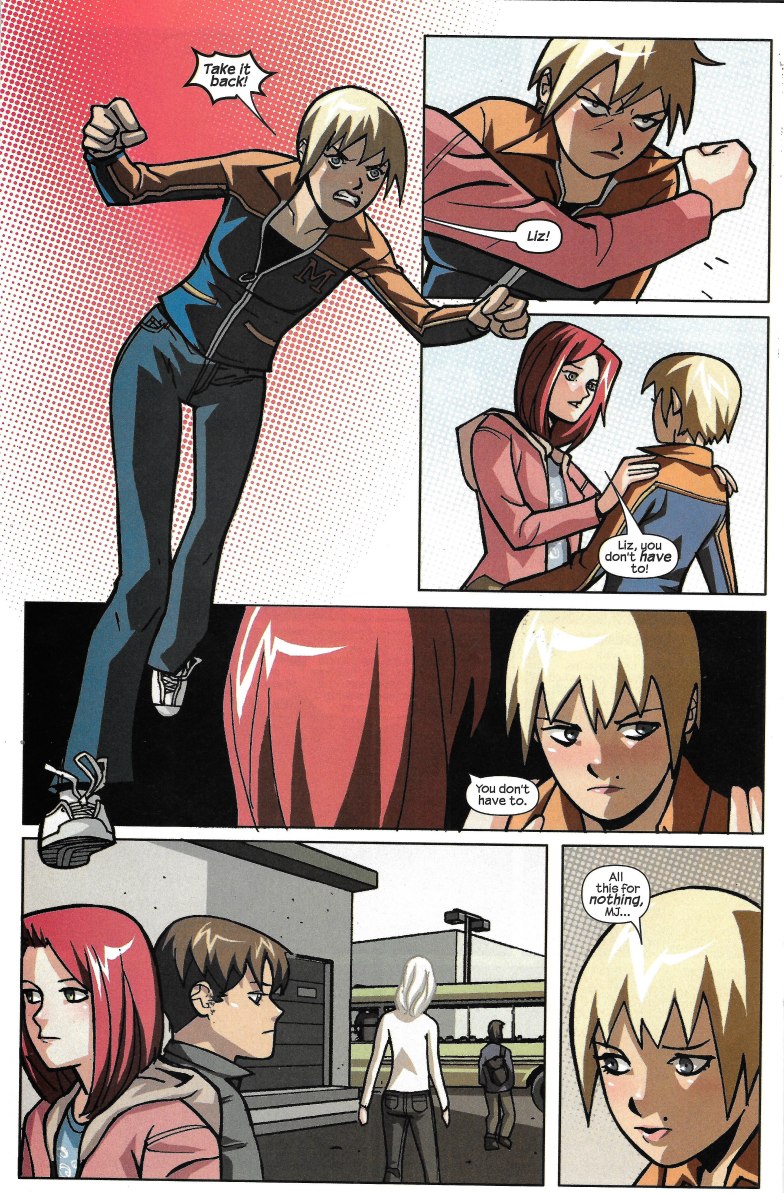 I’m sorry to be so taken with where this book goes, but this is kind of great writing in my opinion. Several of the actual Spider-titles would benefit from background stories like this. And I love Mary Jane’s last line here. 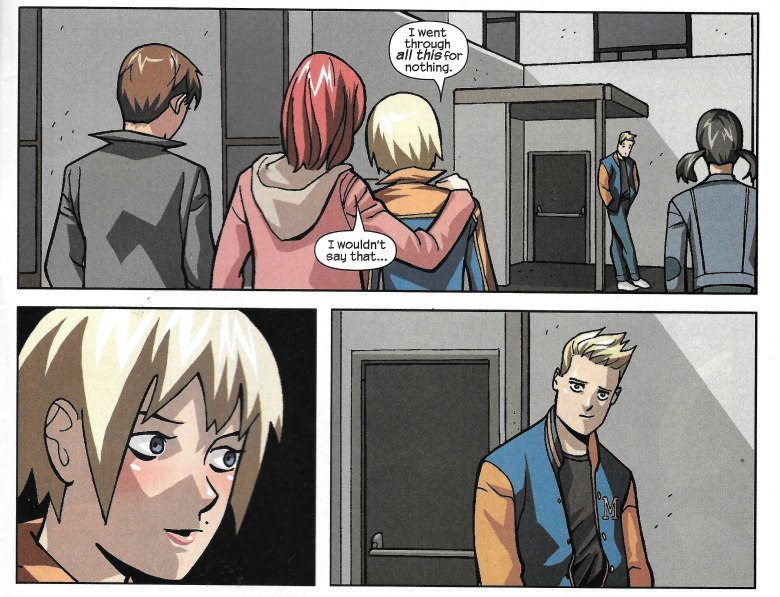 That’s it for this issue, which was near the end of the run. Did Spider-Man end up with MJ? Hard to tell given where this was headed and with the axe falling on issue 20. If you see these, my suggestion would be to buy them for the story, even if the magna art bugs you. There’s a pretty good personal story going on between those covers.
Posted by SonOfCthulhu at 7:39 PM