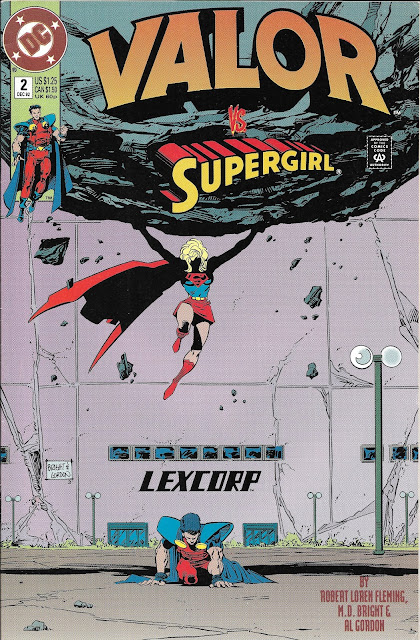 Not the family feud you were expecting

Sliding in just a few months after that Action Comics 667 issue came this issue of Valor, a hero that before the Crapbox I had never heard of. So while I can slide on giving you background on Supergirl again, I now have to dig up who Valor is, what his power set might be, and why he gets the honor of being drawn by one of my favs, Mark Bright.

Valor came about as a mutation of the Superboy story of Mon-El from 1961. Mon-El is a Daxamite, a race of aliens that develop Superman-like powers under a yellow sun. He crash landed on Earth with amnesia, not knowing his true name was Lar Gand. Superboy though he was Kryptonian and gave him the surname El and named him “Mon” after the day of the week he landed. The superpower set he had mimicked Superboy’s, the caveat being that Daxamites are immune to Kryptonite, but exposure to lead is lethal to them. Mon-El took an accidental lethal dose and Superboy sent him to the Phantom Zone. He would later be cured (sort of) by Brainic-5 in the 30th century future of the Legion of Super Heroes.

Because of Byrne’s tinkering with Superman’s origin in the 1980’s cutting out Superboy from ever existing, there was a lot of messy things done to bring back the Legion and place them in continuity. Mostly it was interference by the cosmically powered Time Trapper creating “pocket universes” that contained many of these characters. Superboy and Mon-El’s histories were thus preserved. For a while anyway, until a Trapper underling named Glorith usurped the Time Trapper’s power.

In this new timeline, Lar Gand was the son of one of the Daxamites who participated with the Dominator lead invasion of Earth in 1988-89’s Invasion! Miniseries. The Daxamites turned on the Dominators in the end, but Lar Gand’s father was killed in battle. Lar lead forces that would free the humans the Domintors had experimented on to release their hidden superpowers in a second Invasion strike that never reached Earth. As a defense, these metas were setup on various world where they would evolve populations that would become the basis for the superpowered races of the Legion far into the future. Pretty neat way of turning that on its ear.

Gand would also spend a brief period with L.E.G.I.O.N. and play a part in DC’s Eclipso: the Darness Within crossover (a series whose covers had plastic jewel attachments that would indent other comics placed in the box with them. Thanks, DC!). During that later series, Superman gave him the name Valor. In 1992 he got this series, which lasted all of 23 issues before timeline screwiness got so convoluted that it fell apart under its own weight. He would later reappear as M’Onel, which I can only assume was created at the time that Moesah was popular.

This issue is very short on actual story and Robert Loren Fleming doesn’t give us much in the way of background or character development. Valor comes across as bland as a generic Superman archetype can, with a dash of “just a youth with superpowers.”

Of the few things we do learn about Valor is that he likes working on spaceships, his opening thought bubbles tell us that in great detail. 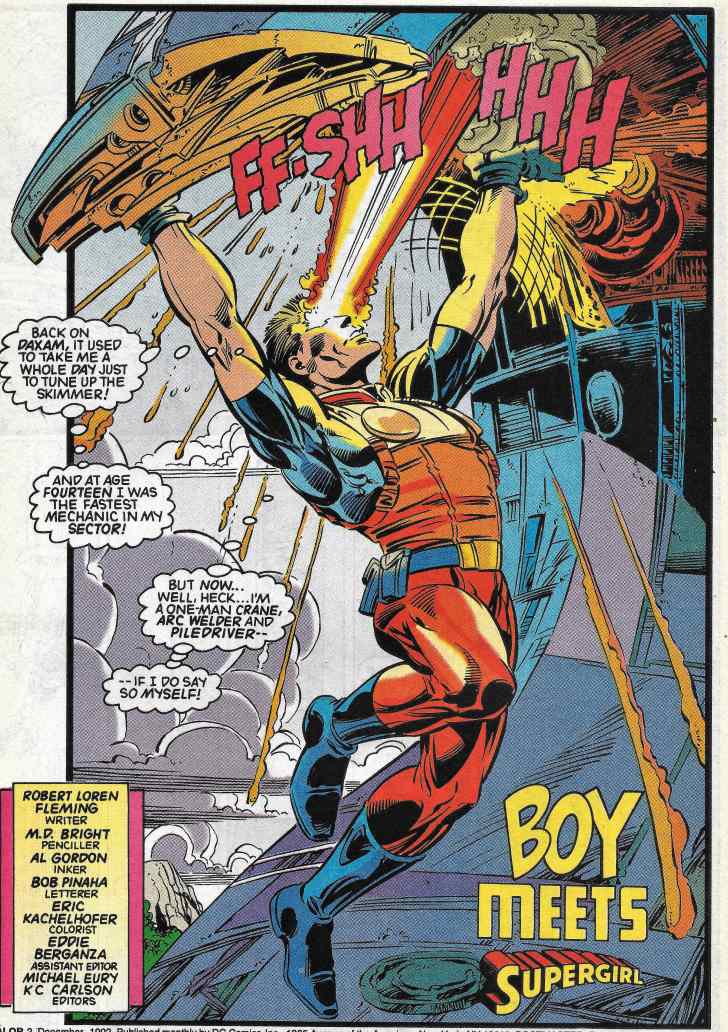 And then we see him building a giant flaming sculpture as a memorial to his late father. This looks very much like a similar panel that Bright used when Green Lantern tackled Mongul in the ruins of Coast City at the end of Reign of the Supermen.

Two pages are used to show the depth of respect that Lar has for his late father and the breadth of his power set. It is neat but wasteful use of pages in a book that feels tremendously lite on story. I do love the Bright graphics with Gordon inks though. 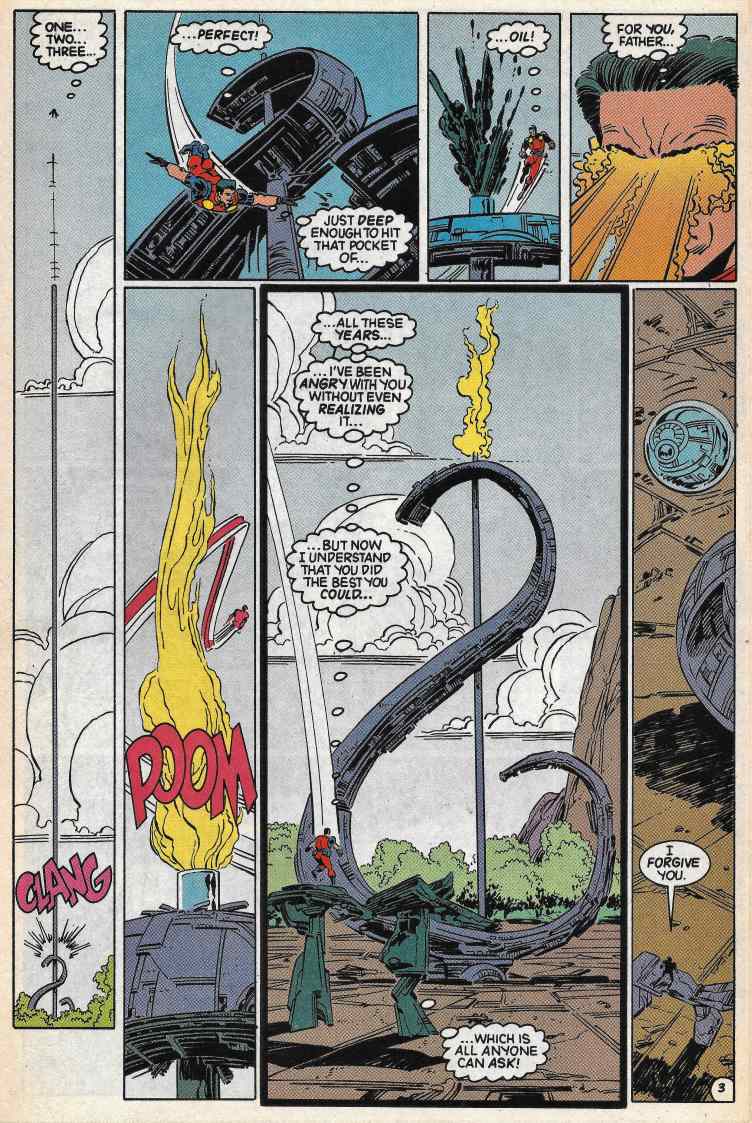 All of this is being observed by Lex Luthor, Jr., who appears to have sic’d his lovelorn Super-pet on him. 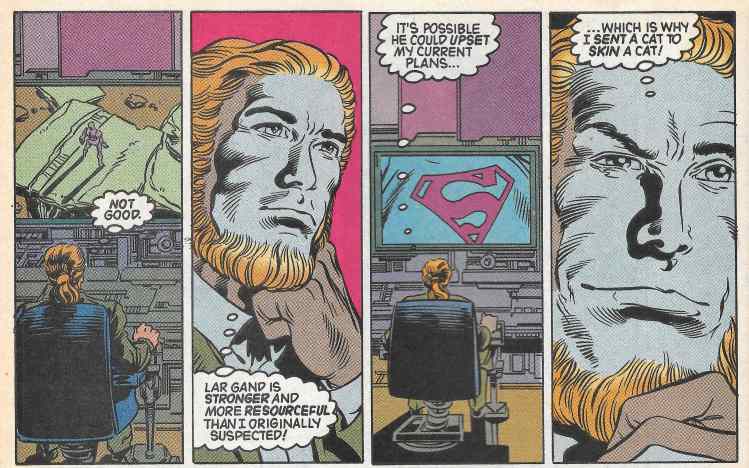 Why, you might ask? Well, as Lex puts it… 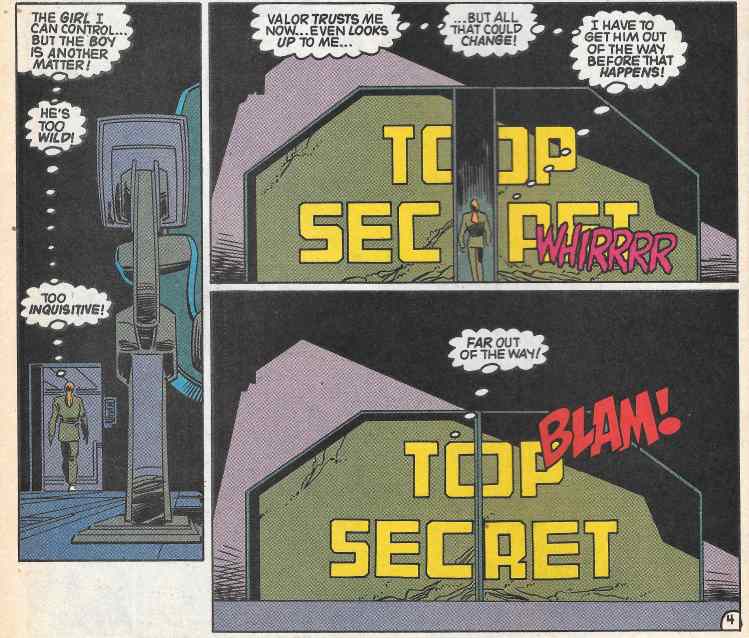 …this is in an attempt to get Lar Gand to focus on something other than Luthor. Which would be fine, except EVERYTHING about this plan makes Lar’s primary focus Lex and the goings on at Lexcorp. You’ll see what I mean shortly.

But first off we get Gar Land meeting Supergirl. Er…make that Lar Gand. Nice first shots and it is easy to see why Lar might be a bit taken aback 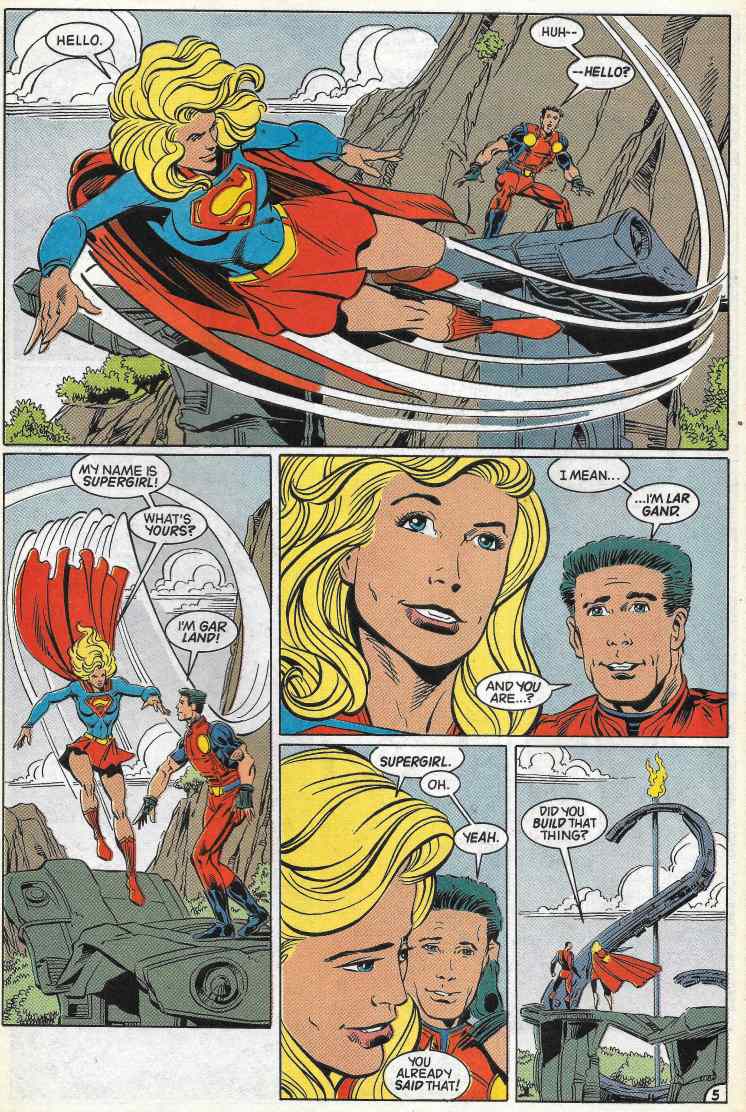 While Bright’s art is really doing its job, Fleming’s words are kind of…off? Like here, where Lar tells Supergirl what the purpose of the giant “S”-like structure is for.

And she doesn’t think to ask why he is memorializing his father. Did he die in battle or was he a great leader or philosopher or something? We can write some of this off to Supergirl being a bit of a ditz in this universe, just like this ham-fisted segue into I’m taking you to Lex Luthor, Jr. without so much as attempting to persuade the dear boy. 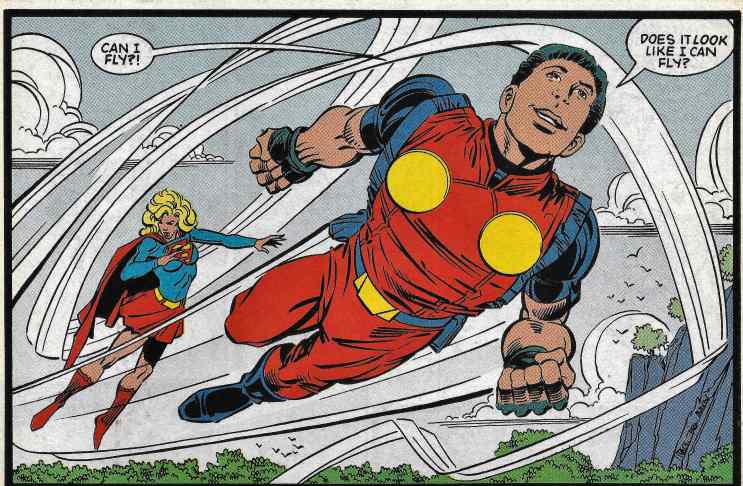 …but instead of SG acting suitably impressed, she cops an attitude like his abilities are no big thing. Which leads Lar to start questioning this “chance meeting”, specifically when Lex Luthor, Jr’s name is brought up. 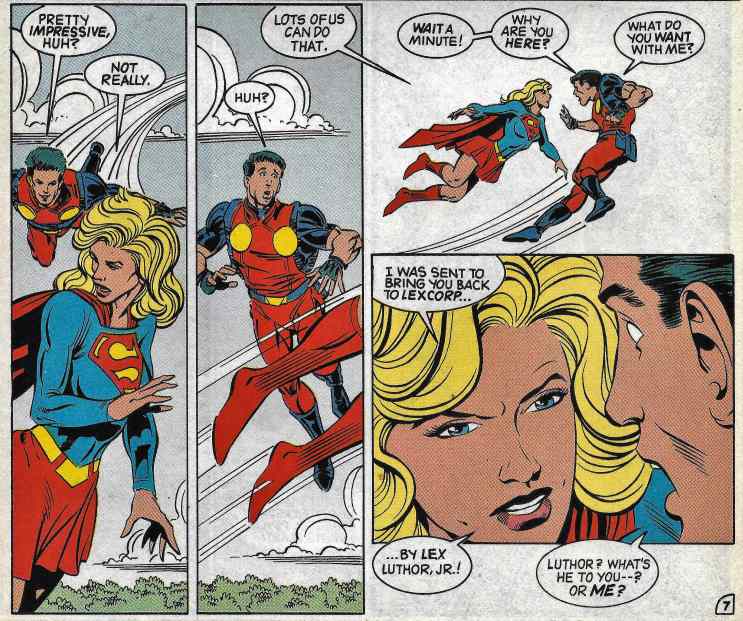 And remember how earlier Lex was saying how he wanted Lar out of the way? How does forcing him to Lexcorp accomplish that? It puts him more “in the way” than ever before. Here Lar as much as states that he’s got plans of his own that don’t include Lex. Which causes Supergirl to issue first a verbal threat… 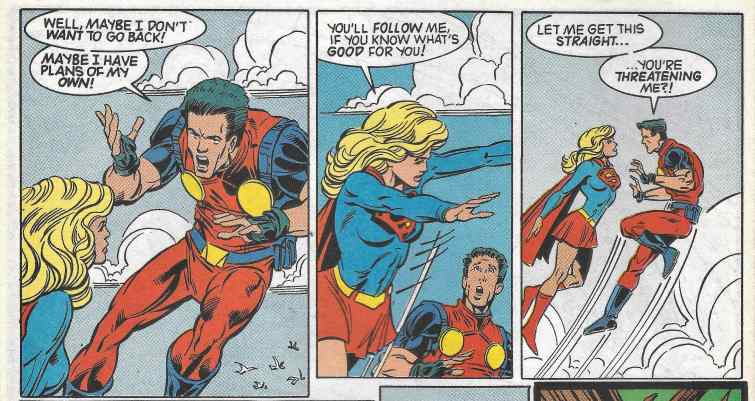 ..and then to back that up with a powerful psycho-kinetic power blast. 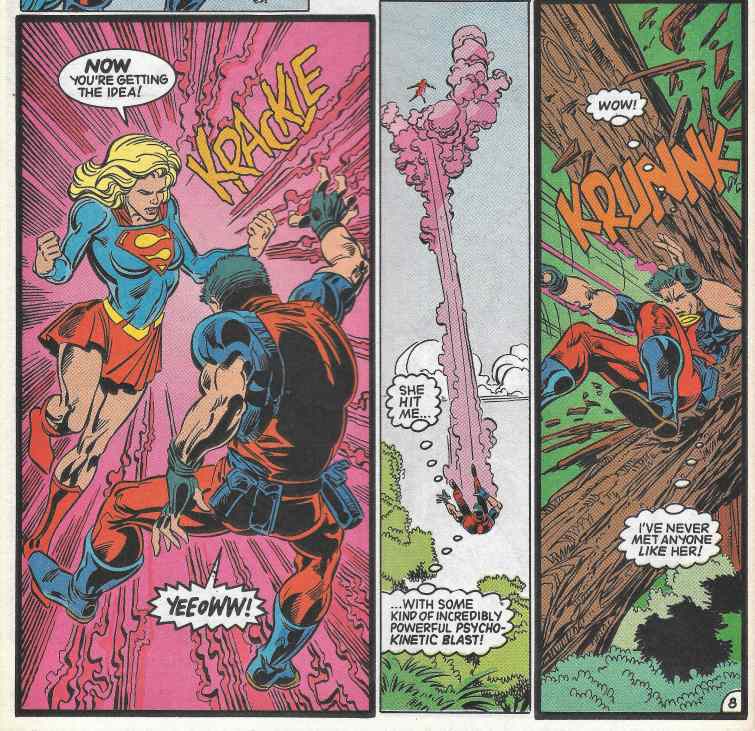 Which lands Lar in the trunks of some trees. Supergirl arrives to apologize and then cart him off to Lex, Jr., but Lar plays a little trick on her and wrestles his way on top of her. 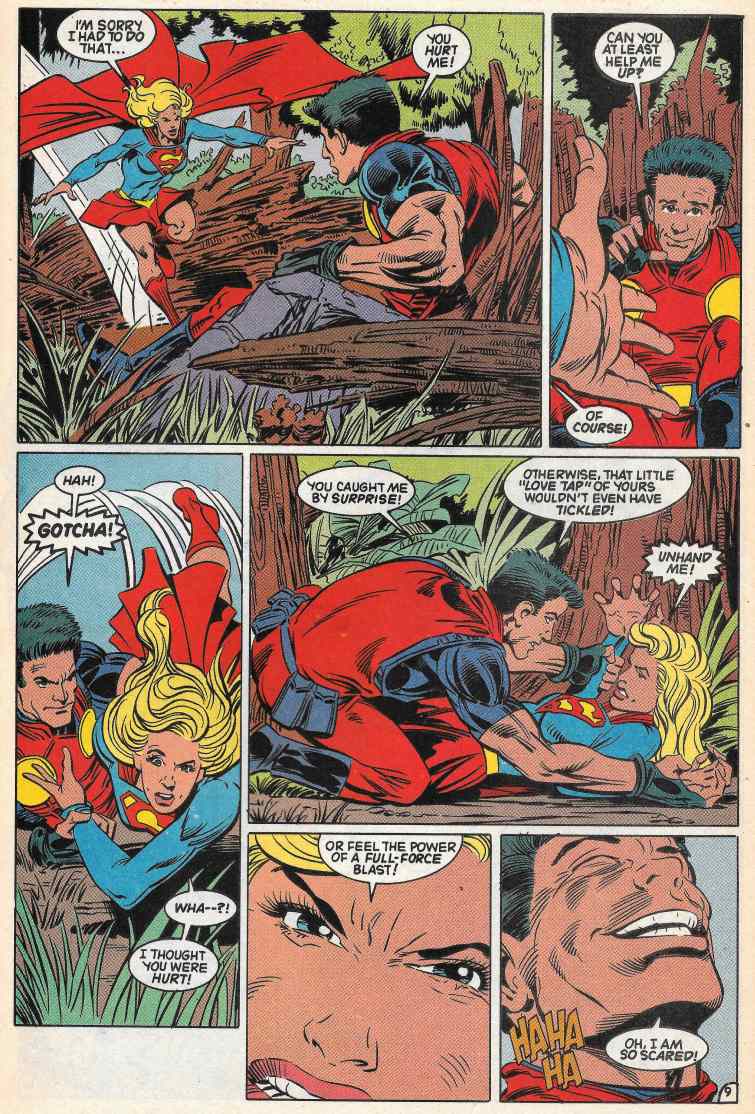 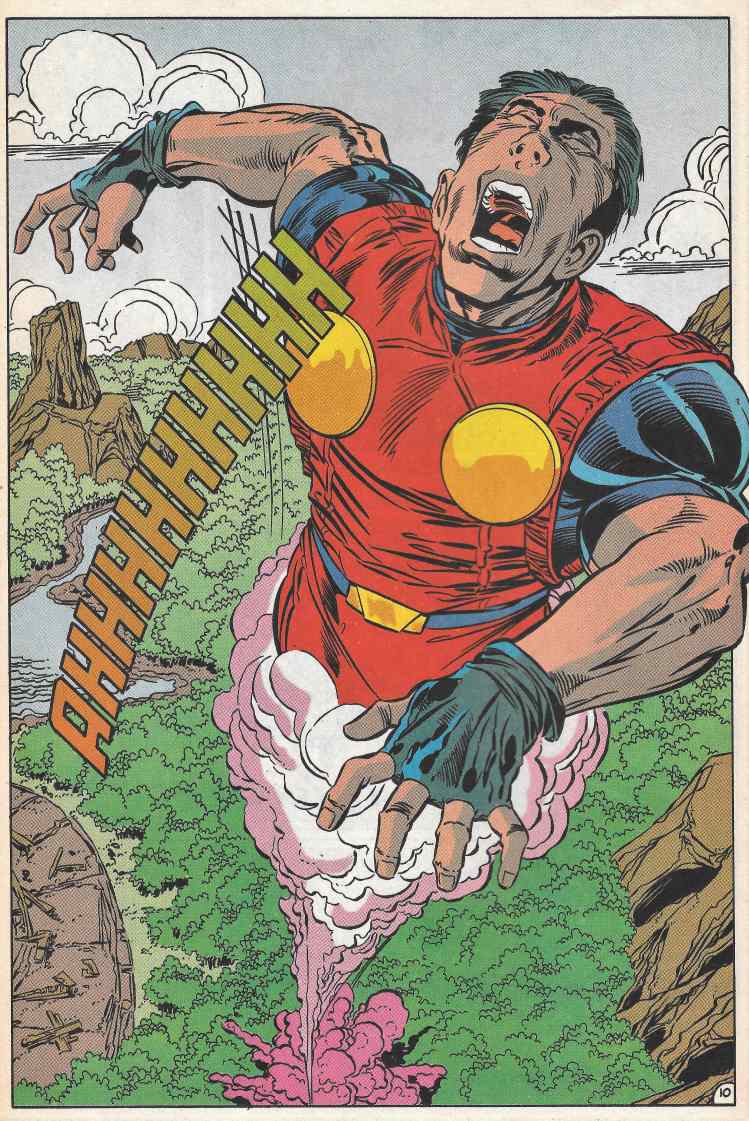 Yeah. Minor screw-up there, Valor. And like a batter setting himself up with a fake thrown ball, Supergirl pulls up a log and aims for the bleachers. 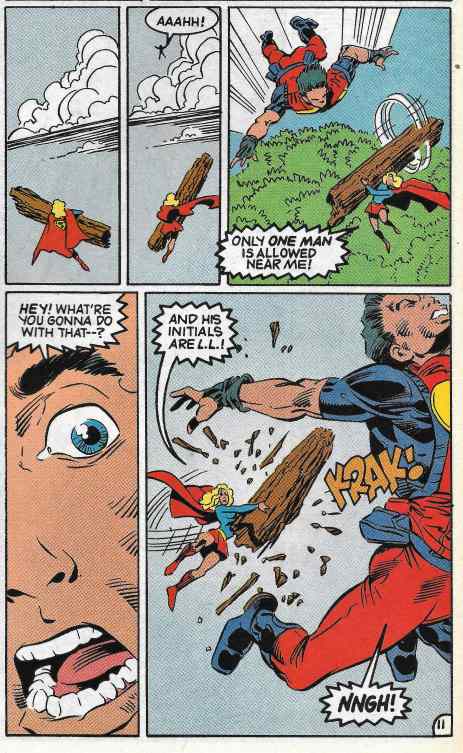 Lar probably deserved that for getting a little #MeToo with Supergirl, but you have to admit she did hit him first. What didn’t deserve any of this action was his father’s memorial, which… 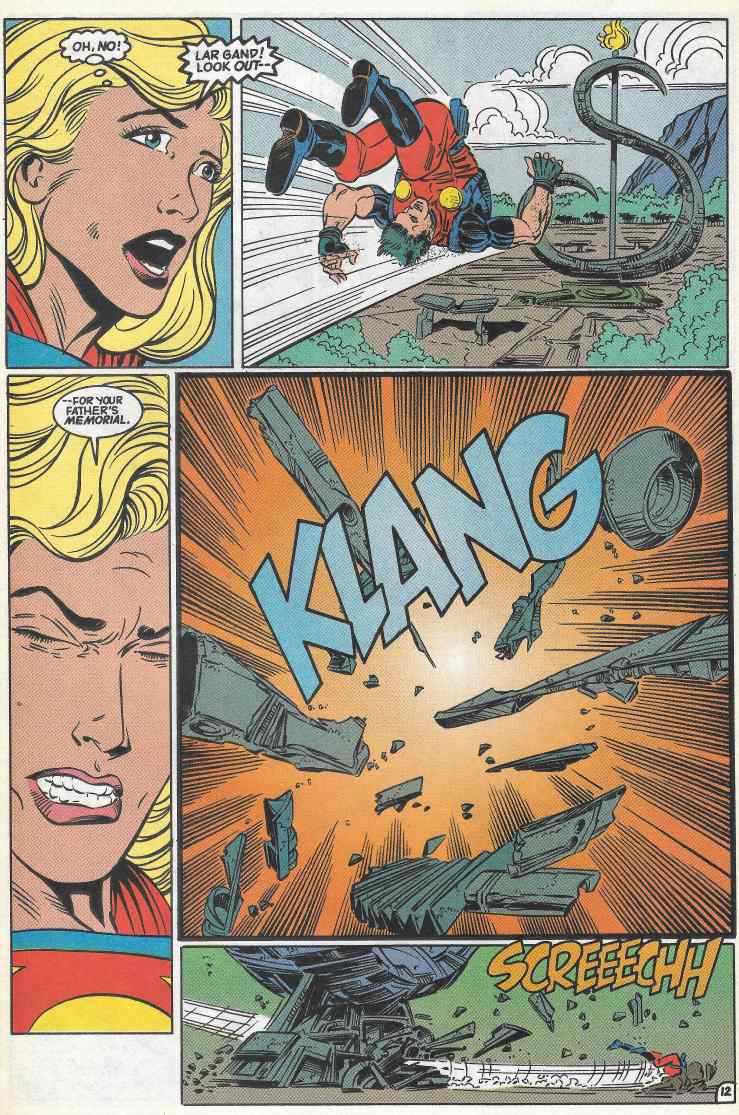 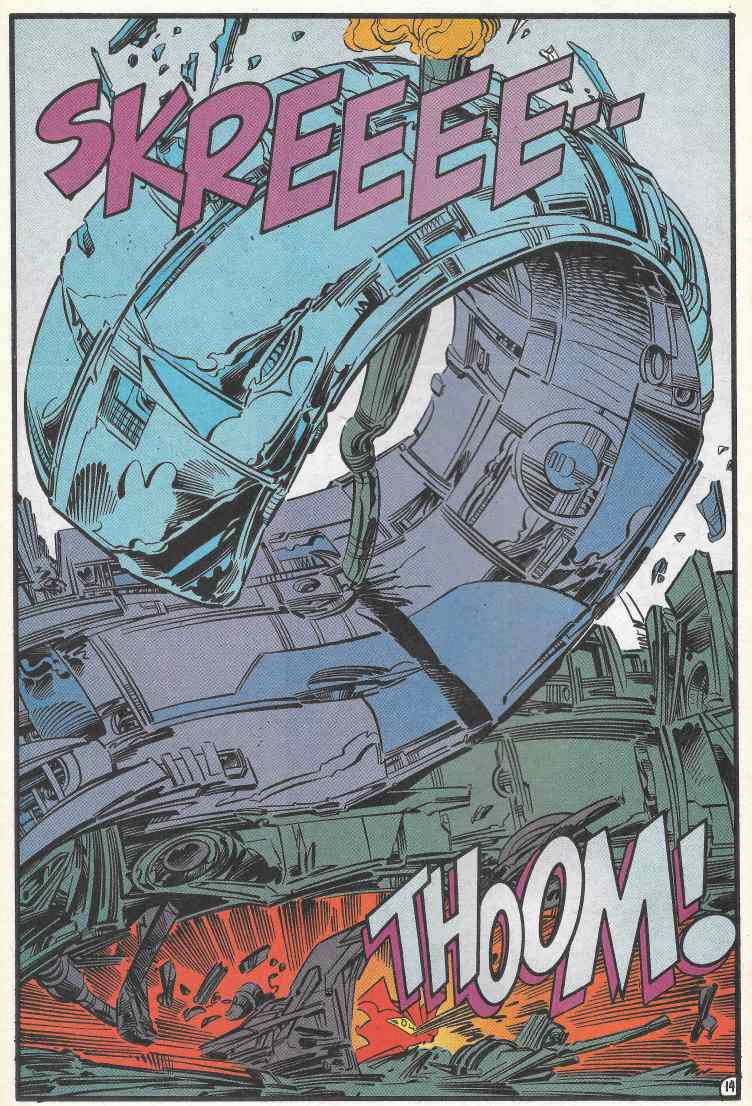 ...completely collapses on both of them just as she promises to help put it back together as good as new. This causes Lar to pursue her, going as fast as either of the pair ever has. Supergirl plans on leading him back to Lexcorp. What she doesn’t plan on is Lar catching up to her. 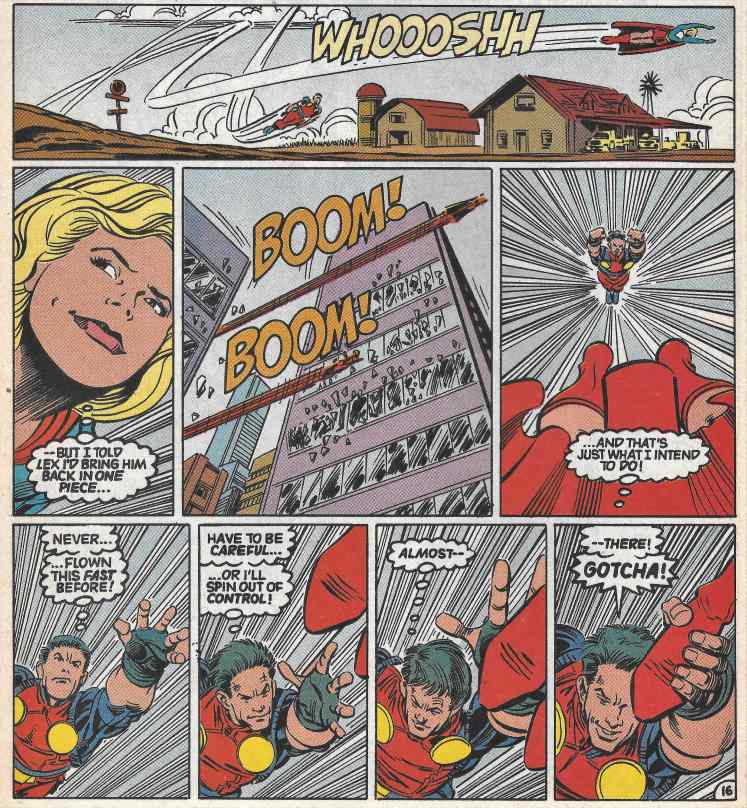 And that one little grab ends up unbalancing both these air racers. Supergirl corrects her momentum in time. 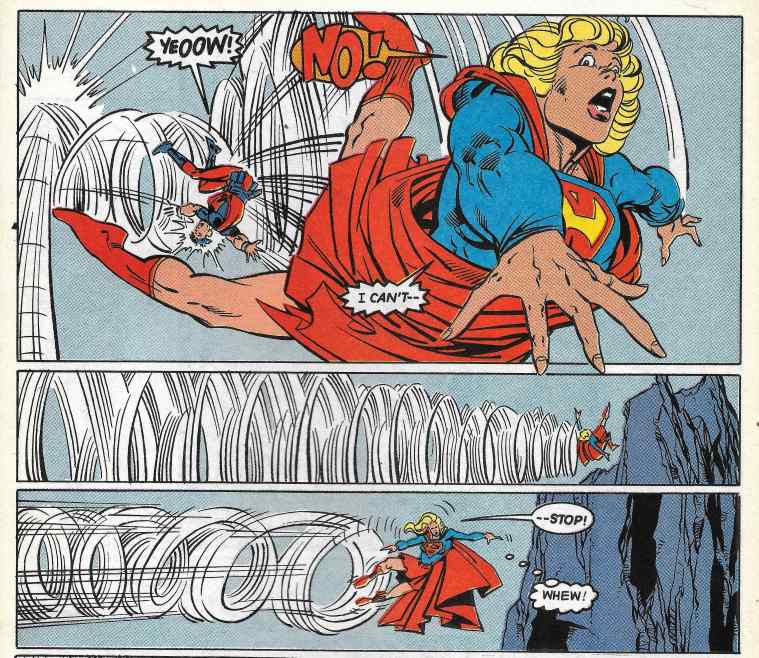 Lar, not so much. 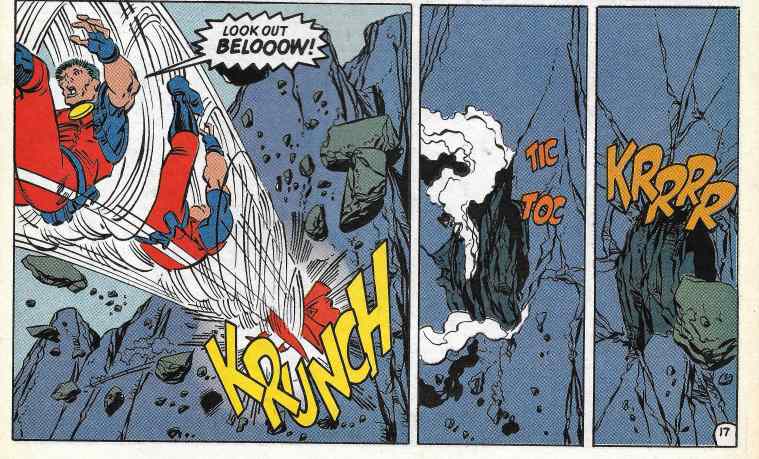 Which ends up being worse off for the mountain than for him. But Lar doesn’t know that Supergirl didn’t join his fate in crashing into the edifice, so starts tearing through the wreckage looking for her. She turns back from being invisible while trying to think of some plan to get him to Lexcorp. Idly, she wonders what Lex would do if he were there… 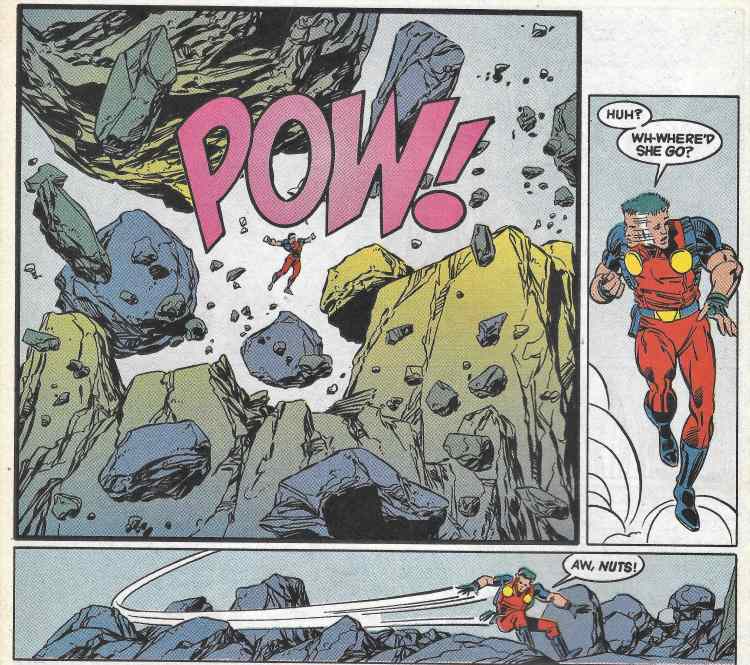 And BINGO! She makes herself into the likeness of Luthor, Jr and convinces Lar to come back with her using his awesome power of intimidation. Lar acts a bit like a little kid when Lex shows up, so I’m not really certain why he thought he would have any problem with Valor. 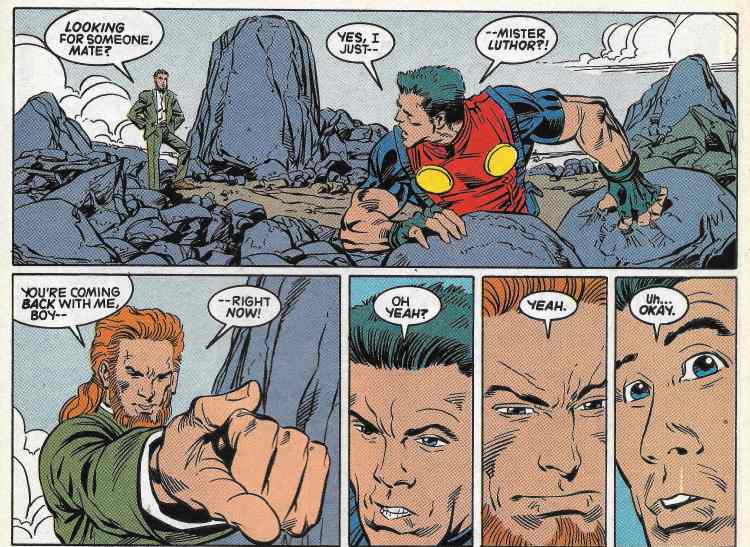 Speaking of which, she finds a way to ditch him right at that Top Secret door in Lexcorp, an area I would think Lex would want Valor farthest from. Apparently not, as Luthor strides out and welcomes him right in, to his surprise. 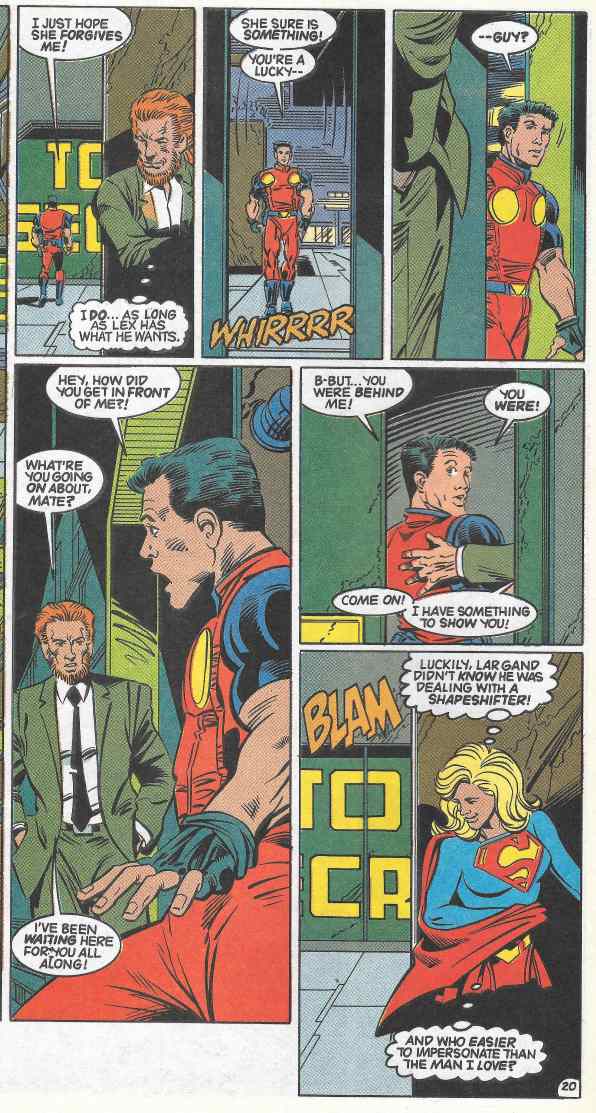 And the thing that Luthor Junior is keeping under wraps is a interplanetary star cruiser that Lar jumps at the opportunity to work on. 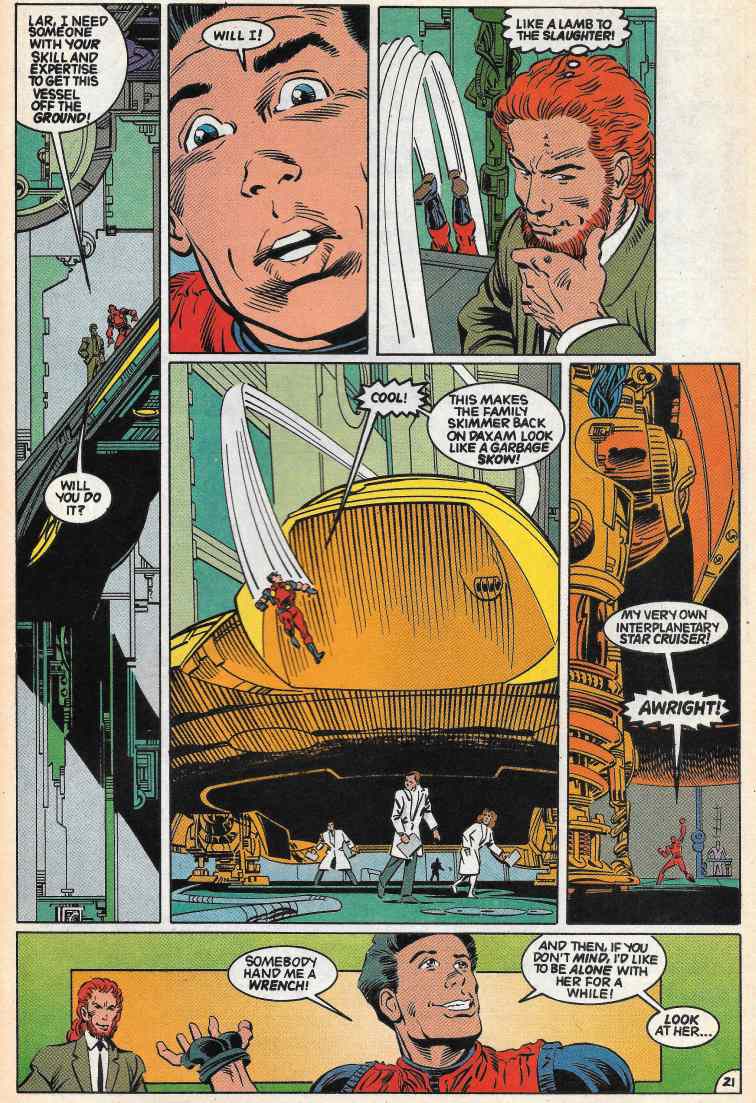 And while Lar is busy working on Lex’s spaceship, Supergirl arrives back at the site of the busted-up memorial with a load of iron girders. She seems a bit put off that she made the promise to fix it, but nevertheless, she flies off to start work.

The Mark Bright-Al Gordon art couldn’t be better in this, however it is such a shame that such a non-descript title got their talents. The only bright parts to the story is the art, as the characters seem to have very little real incentive behind their actions. For all that Lex appears to be watch Lar as he works, he might as well have Supergirl invite Valor over to inspect his starcruiser from page one. Or fly over on a Lexcorp helicopter himself.

It feels like filler, is what I’m saying. Unlike the Stern piece from Action Comics that setup the motivations of three characters with respect to one another, this was gratuitous with weak dialogue.

Nice looking fight scenes though.
Posted by SonOfCthulhu at 2:18 AM