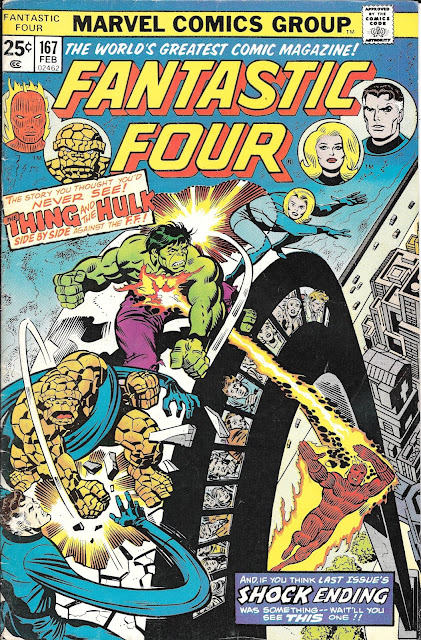 The stunning and startling conclusion!

I sure hope you didn’t miss yesterday’s startling beginning to this tale because I literally so cannot wait to start this issue that I am again skipping the intro. With a cast like the ones mentioned above who could blame me. The Perez era of the Fantastic Four held some of the best stories, and this one is NO exception. Let’s jump right in where we left off.

With the Thing taking sides with the Hulk against his former teammates in the Fantastic Four. 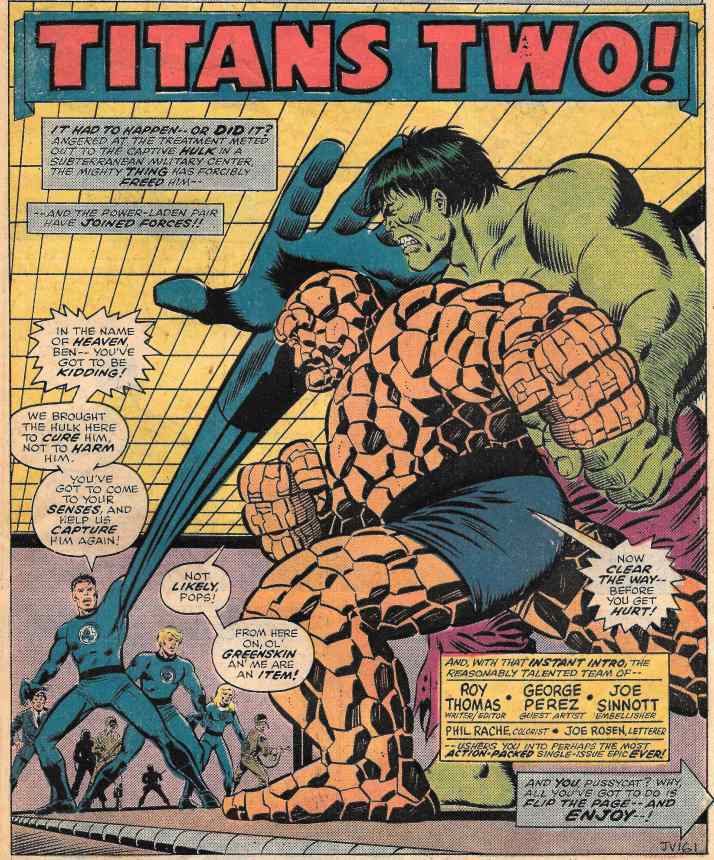 After saying those words, the Thing surprises Mr. Fantastic by grabbing his extended hand and throwing him bodily against the nearest wall. Reed splats like a water balloon and goes limp. 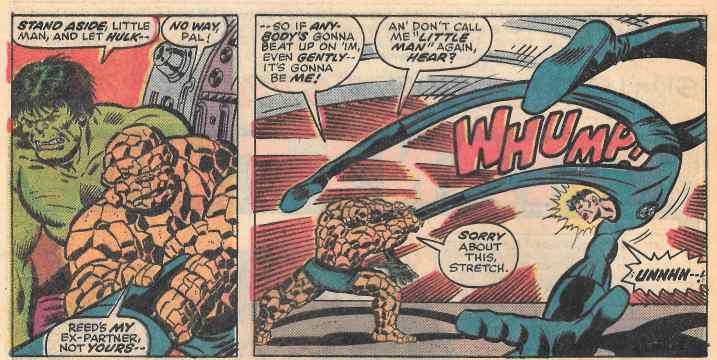 Seeing his brother-in-law and the leader of the FF treated so inconsiderately, Johnny Storm flames on only to have the massive hands of the Hulk flame him right back out. 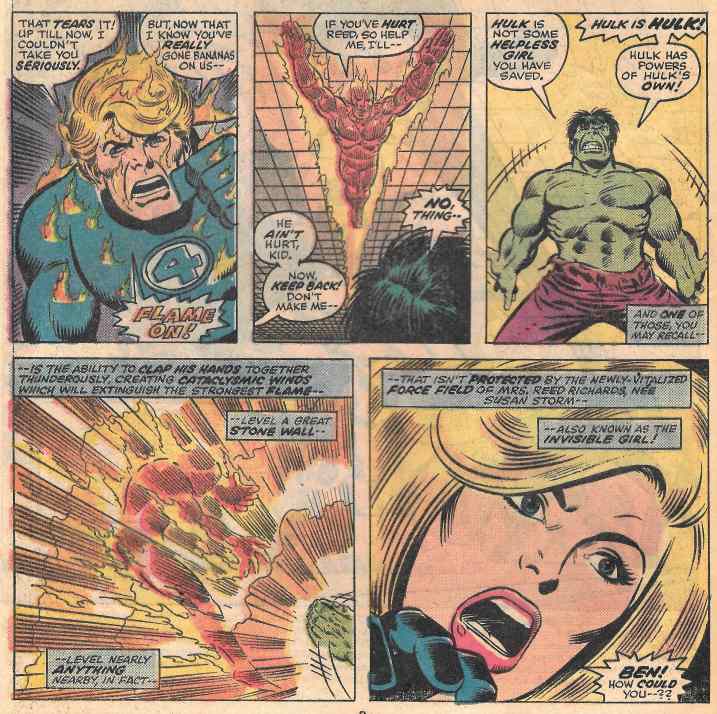 With her husband and her brother both knocked out, that leaves Sue Storm minding the store, but honestly she’s way more capable than Stan Lee ever gave her credit for. Unfortunately, there is a limit to how much of a pounding her powers can take and the combined strengths of both the Hulk and the Thing quickly reach it. 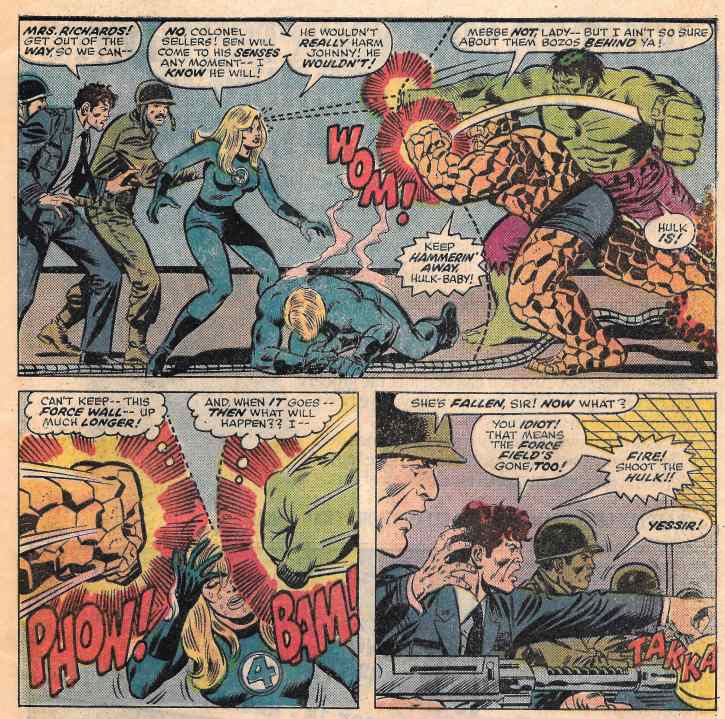 With the last of the Storm kids knocked out, Colonel Sellers’ men decide to throw some bullets at the pair, which everyone should know by now will just bounce right off the both of them. Reed wakes up in time to nab the guns the fellows are pointing before the ricochets hit anyone. 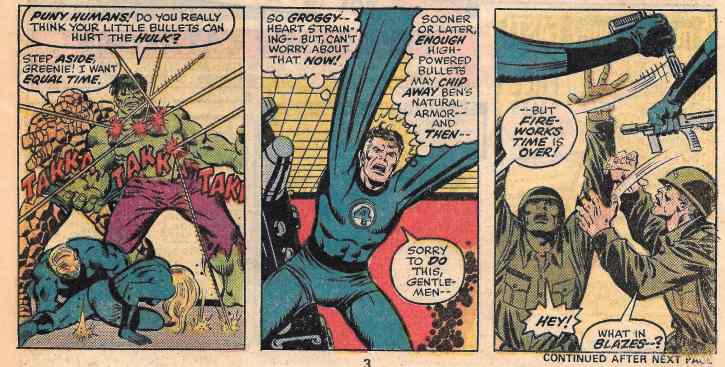 The destructive duo jointly decide to smash through the back wall of the lab, a feat that astounds Colonel Sellers.

…and they happen to end up in the hanger. Seeing three weird whirly birds causes the pair to do a little stress testing with two of them… 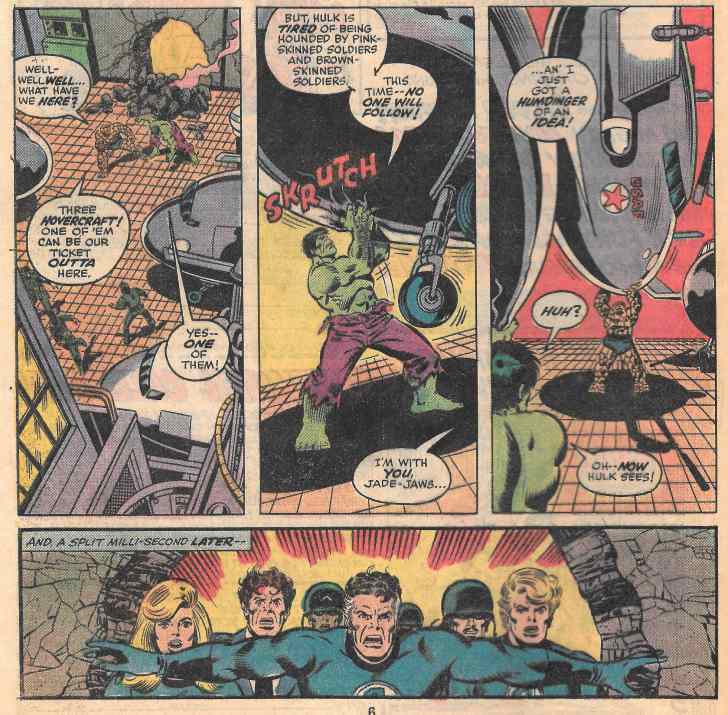 …which both flying craft fail miserably… 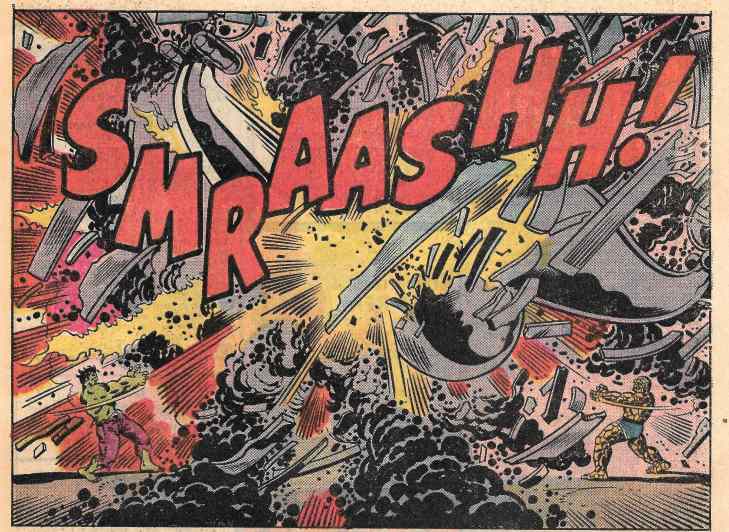 …and then they take the third off on a little joy ride. 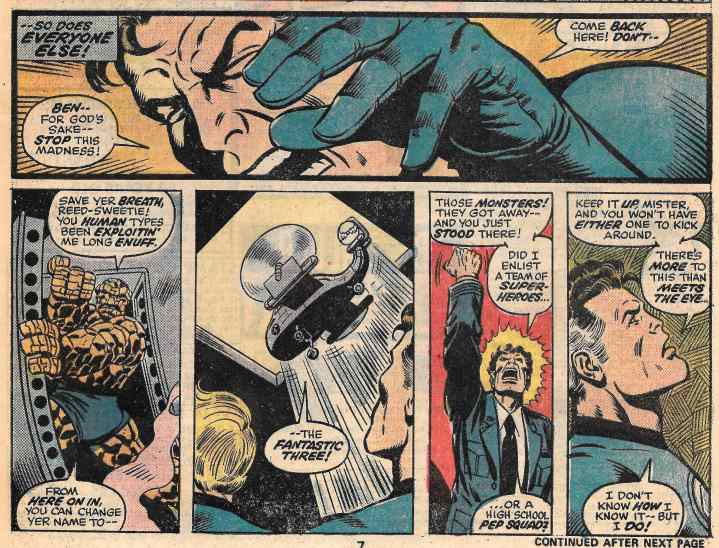 And no, that last bit from Reed isn’t a hint that FF is tying in with the Marvel Transformers mag (which would be quite a feat, seeing as how it wasn’t around yet).

As our Terrific Trio watch the ship glide away, we turn to the Hulk and Thing in the cockpit trying to figure out where they should go. Hulk has a stellar idea of someplace quiet, and seeing St. Louis’ Gateway Arch beneath them wants to land so he can sit a spell. 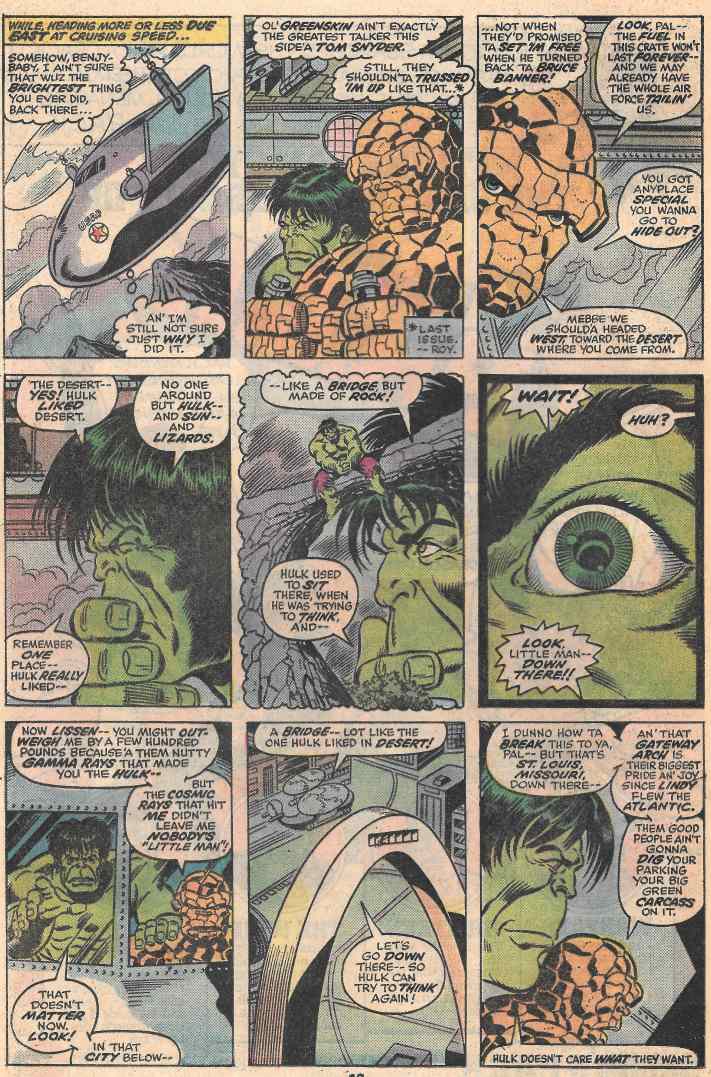 Ben knows better than to willingly land the Hulk in a populated area, of course, but something about being around the Hulk seems to be affecting our rocky pal. Sorta like how there were always friends you’d hang out with in school that would constantly talk you into doing things that would get all of you in trouble. And here the Hulks weird persuasive powers over Ben has him setting down right near the arch.

And that can’t be good.

One thing this does do is make them a sitting target for the rest of the Fantastic Three, as Sellers notifies them of the runaway pair’s location. Sellers has gotten on everyone’s nerves at this point and it would be good to see him get his at the end of this tale. We are going to have to settle for him losing yet another flying spaceship in the endeavor, as the heroes take off in one that is sure to meet a bad end. 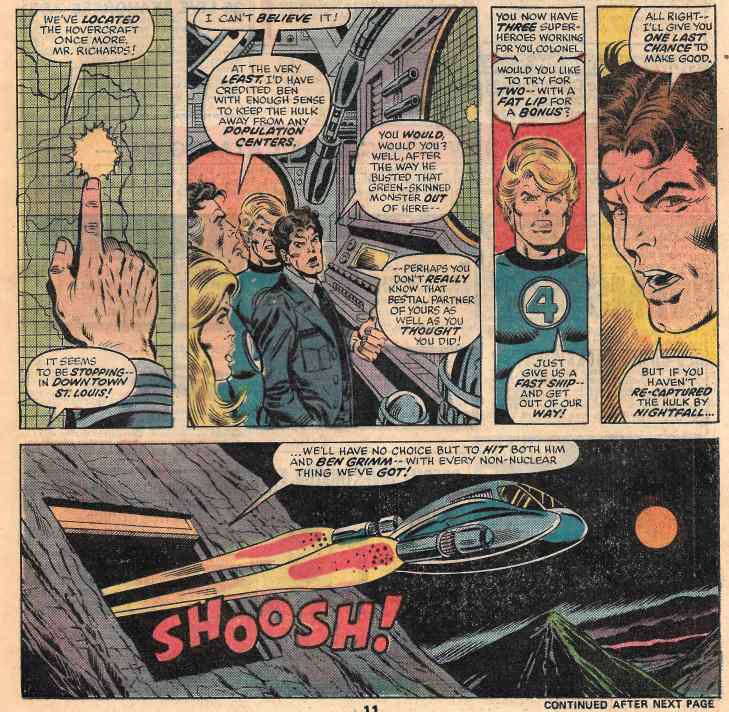 And our in-flight topic of choice happens to be Reed saying just what I was saying a couple of paragraphs before: that Ben doesn’t seem himself when he’s around the Hulk. That convo gets cut short though as they arrive in beautiful downtown St. Louis.

Better appreciate it quick, FF! Because it looks like the Hulk is itching to do some redecorating… 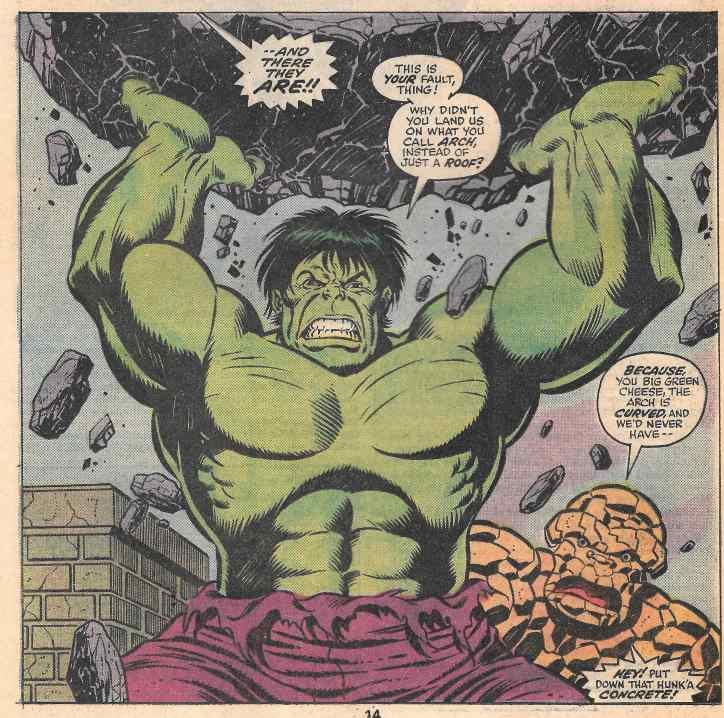 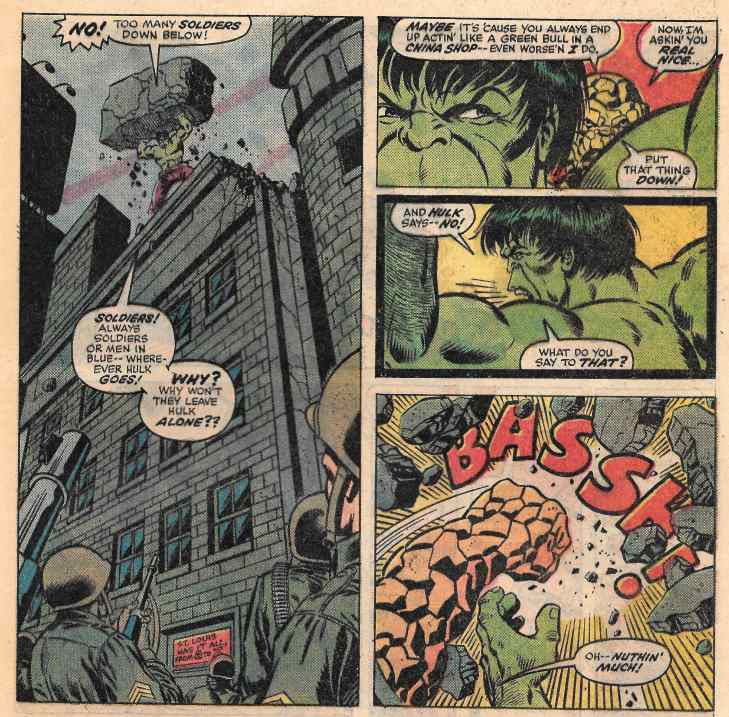 …but removing the weapon from the Hulk’s hands just makes jade jaws decide to hop down for a little dancing with his favorite partners.

Hulk sticks the landing in such a way that no one is left on their feet, however.

And while Hulk is facing off against all of Sellers men down below, bashful ole Benji is fighting off the effects of whatever is making him feel woozy and trying to talk sense into the Hulk before…aw, too late! 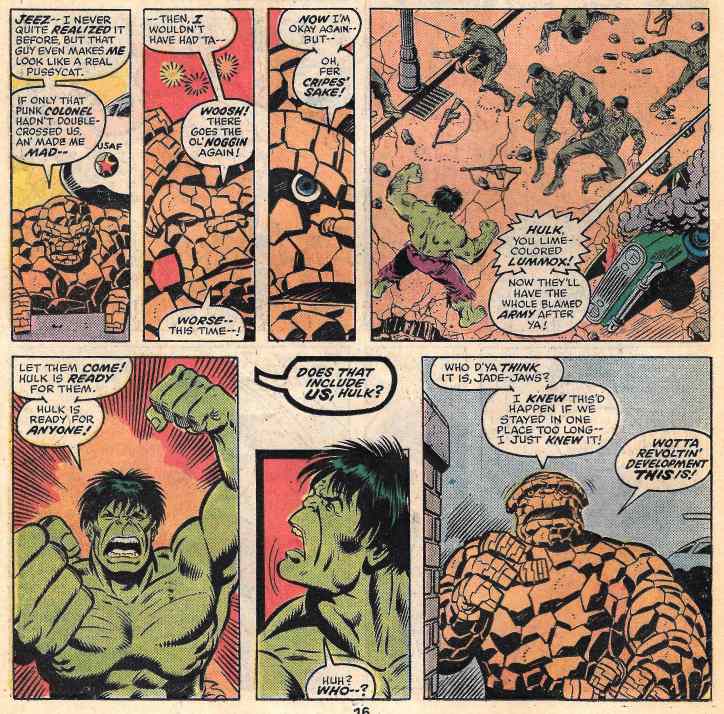 That’s right! The Fanstatic..er, Terrific Three have arrived. And now it’s Reed’s turn be the guy above a monster-man trying to talk sense into him. Let’s see how that works out… 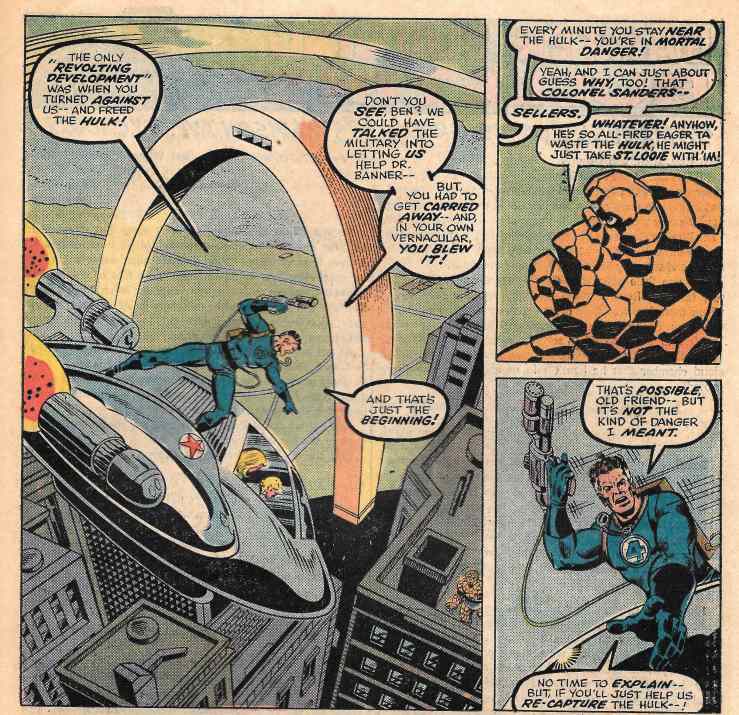 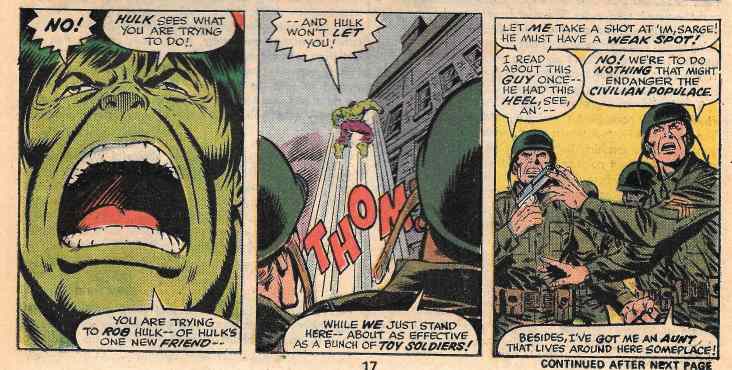 While the soldiers beat feet, the Hulk tries to talk a visibly dizzy Thing into not going back to the Fantastic Four while tearing off a chimney. Ben’s demeanor wavers back and forth, so we know something is up with him and it appears to relate to how close to the Hulk he is. Just as Reed said it would. 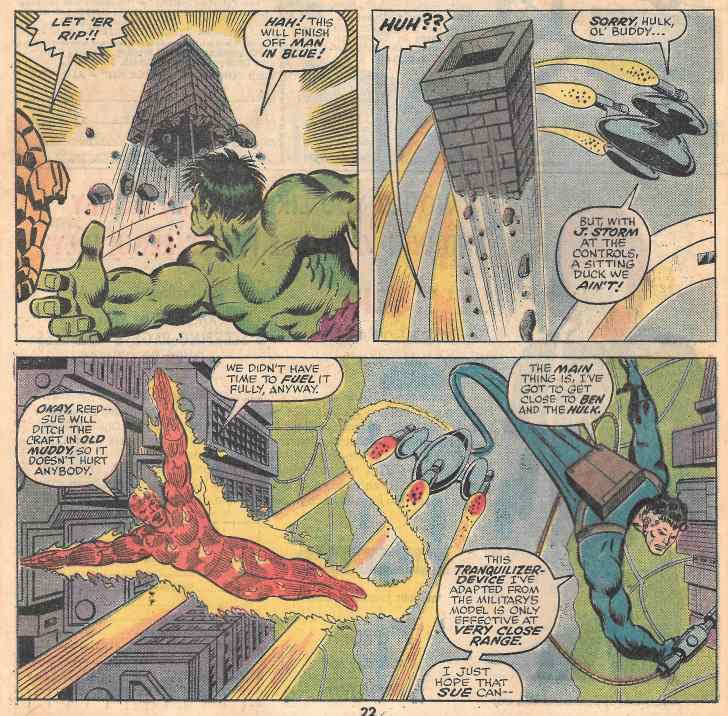 Even Sue’s bit of ditching the plane and then using her forcefield to make it back to shore sounds easy by comparison. 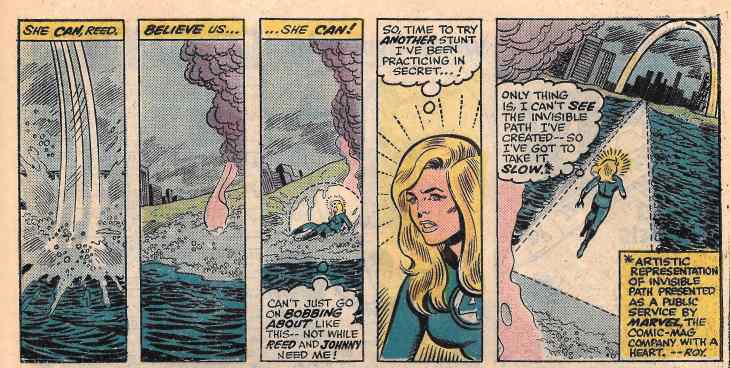 And sure enough, the Thing isn’t making matters any easier. Watch as he roughs-up an overly enthusiastic Johnny a bit. 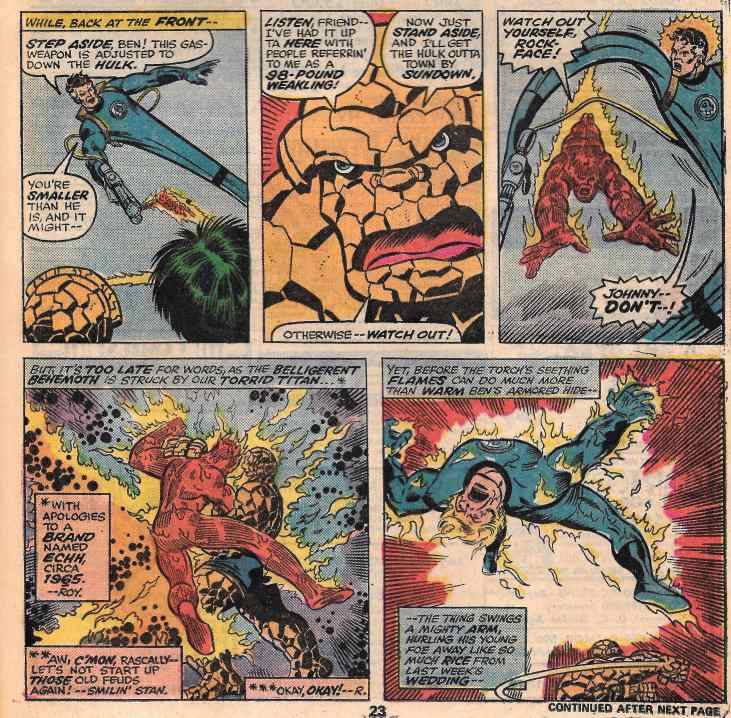 And that sets up our final destinations in the war among the Four, because Reed tries to cushion Johnny’s fall, but ends up stretched to his limit in doing so. Dizzy and looking a bit like one of those blow-up sign-men you see at used car lots, Reed manages to grab the top of the gateway arch before plummeting to the ground. 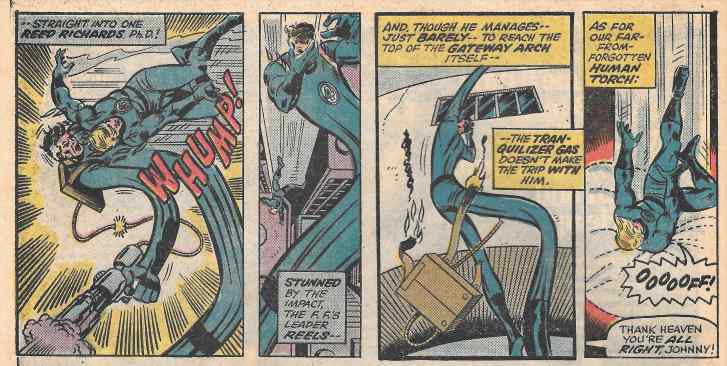 Johnny gets a save care of… 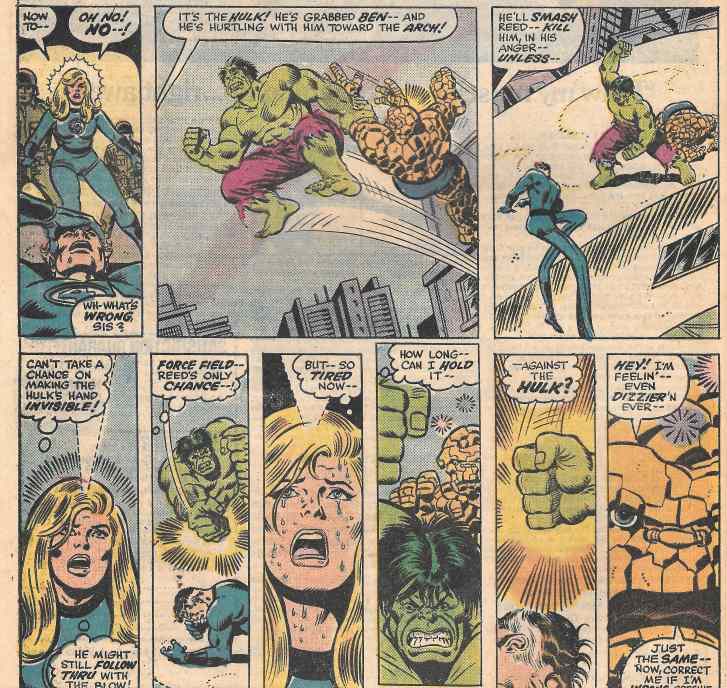 Sister Sue, but they both watch the Hulk jump-dragging the Thing along with him to the top of the arch to pummel Reed senseless. Sue throws a force field around her husband, but we can all tell that it is only a matter of time until the Hulk’s fists find a way through.

And that’s when it happens… 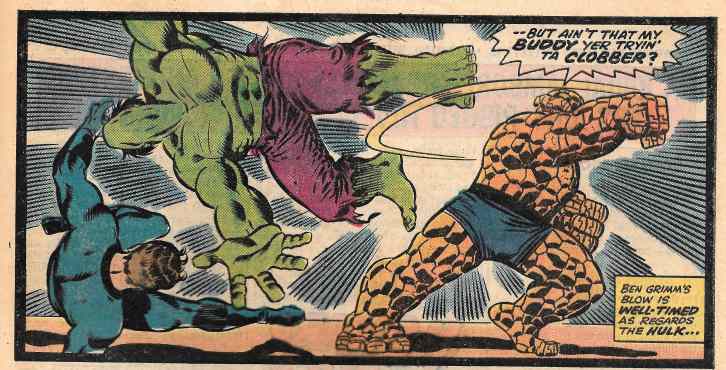 The Thing steps in and clobbers the Hulk in a spectacular blow.

Reed hurtles Earthward and is barely saved by a pushed-beyond-her-limits Invisible Woman.

As for Ben, he is giving the Hulk the fight of his life. 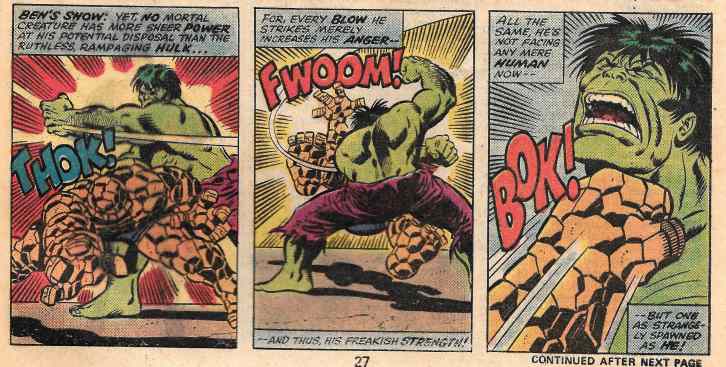 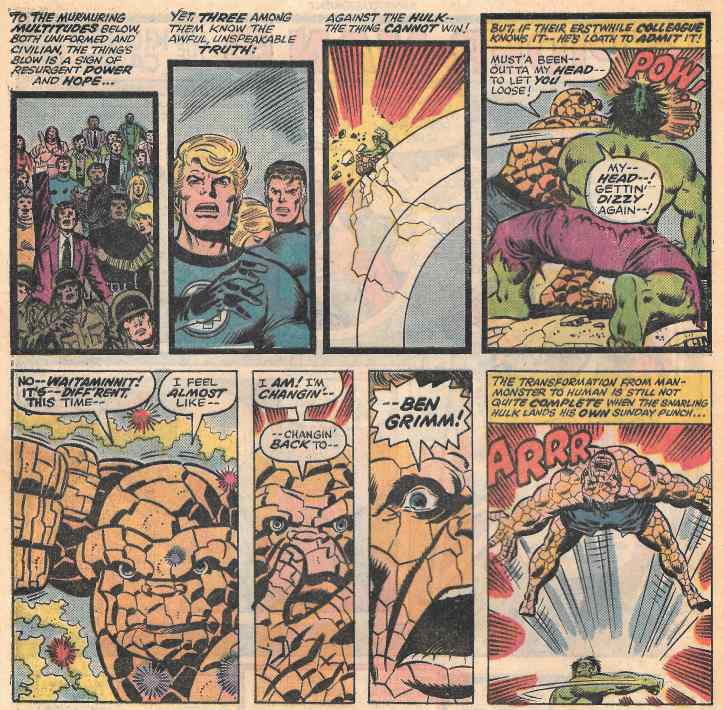 In a shocking twist, Ben Grimm turns HUMAN once more, his rocky exterior lasting only long enough to take the brunt of one last blow from the Hulk. Then it is up to Johnny to create a column of hot air to ease Ben’s fall to Earth, which he does toot sweet! 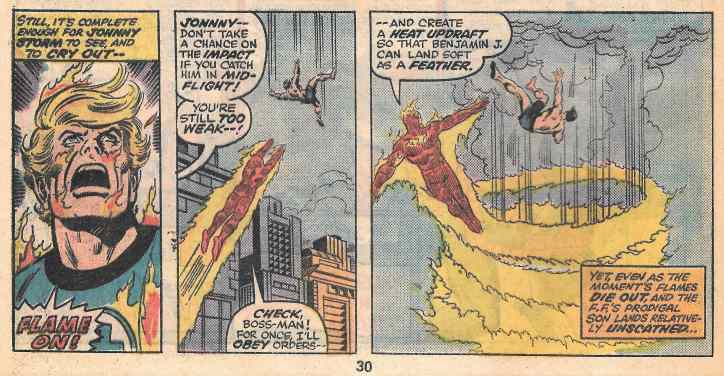 Seeing that his friend is no longer there, the Hulk leaps off angry and alone. 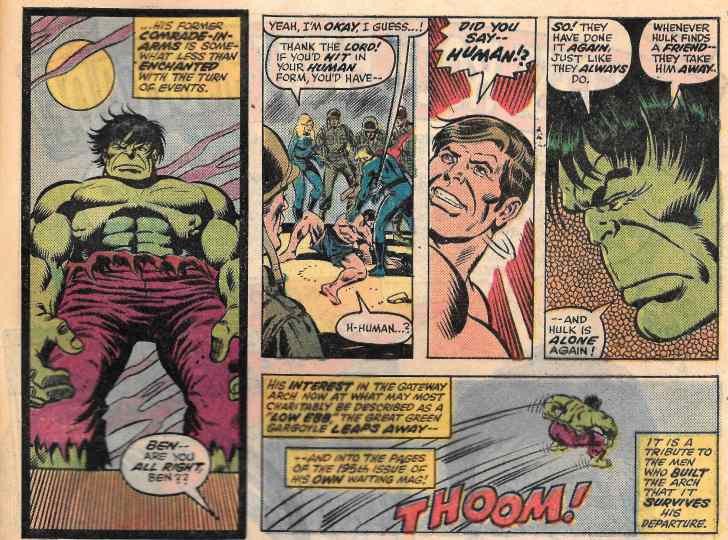 While on the ground, our foursome realizes that Ben’s good fortune may well be the end of the Fantastic Four! 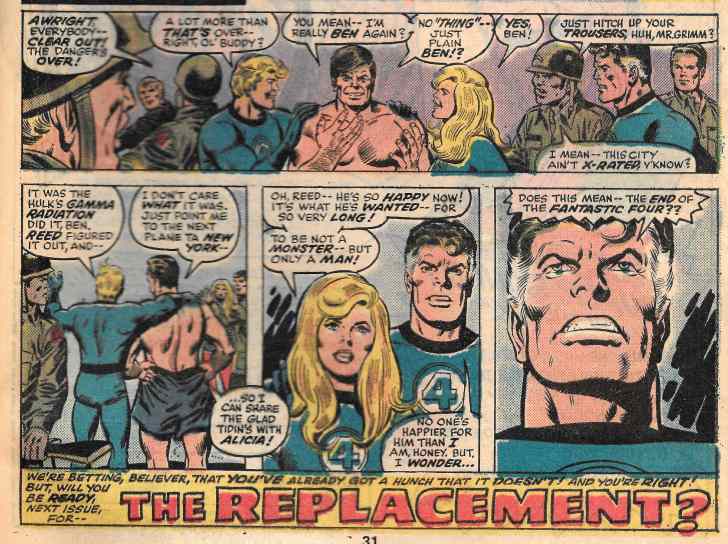 The Crapbox spit out one other Perez run FF that I will save for a bit later. Between these two and Issues 184 and 187 that I had as a kid, I’m going to say that I might have found an era of the FF that I will revere alongside Byrne’s run as modern masterpieces. Any late 70’s FF that I see are getting scooped up.

As for me, I’ll be back on Monday with something “Super” hitting something else “Super.” See you then!
Posted by SonOfCthulhu at 4:20 AM