Superhero vs Superhero
Marvel Super Action #16
The Avengers vs. …The Avengers? 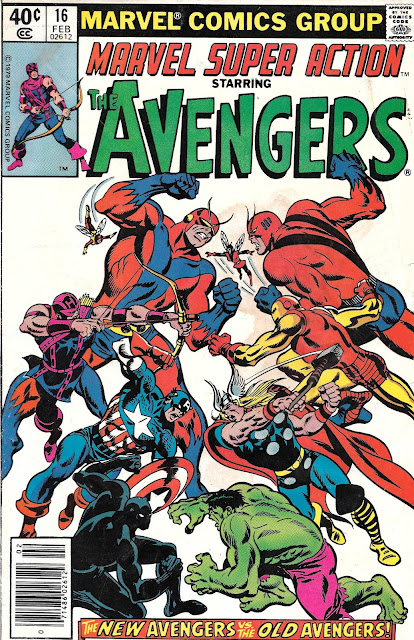 How exactly does that happen?

The Avenger’s Annuals were very special books. In most cases telling stories too big for the normal newsstand issues, these yearly tomes packed lots of action across lots of pages. The foes in these books usually fell into one of two categories: Either they were earth-shattering menaces the likes of which would test the Avengers mettle to the very breaking point or they were other supergroups in many and various forms.

Since that first Annual brought together a smattering of Iron Man and Thor’s foes to vex the supergroup, the Avengers Annuals have seen the team face off against the Squadron Supreme (a Marvel clone of DC's Justice League), the Defenders, The Inhumans, Freedom Force, the Legion of Dead Superheroes, and, in various conflicts both real and for sport, the West Coast Avengers.

Avengers Annuals were a big deal. It’s too bad we haven’t seen one since 1994.

This issue of Marvel Super Action reprints the first half of Avengers Annual number two, an amazing tale where the Avengers fight…themselves. Sort-of-kind-of. And even with the heavy hand of Coletta on inking and the serviceable but not my fav pencilers in Heck and Roth, I still found this tale to be quite a bit of fun. 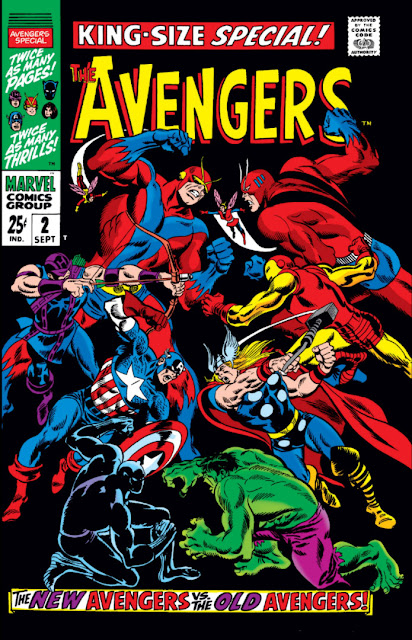 We begin with Cap leading fellow Avengers Hawkeye, Black Panther, Wasp and Giant-Man down a New York street while everyone around them gawks at them in confusion. And before you state that part of those stares could be because Colletta did his usual job of slapping ink on the page with all the skill and precision of a five-year-old, I’m going to tell you that yes, I too noticed how fuzzy and blobbish the finished art come off. 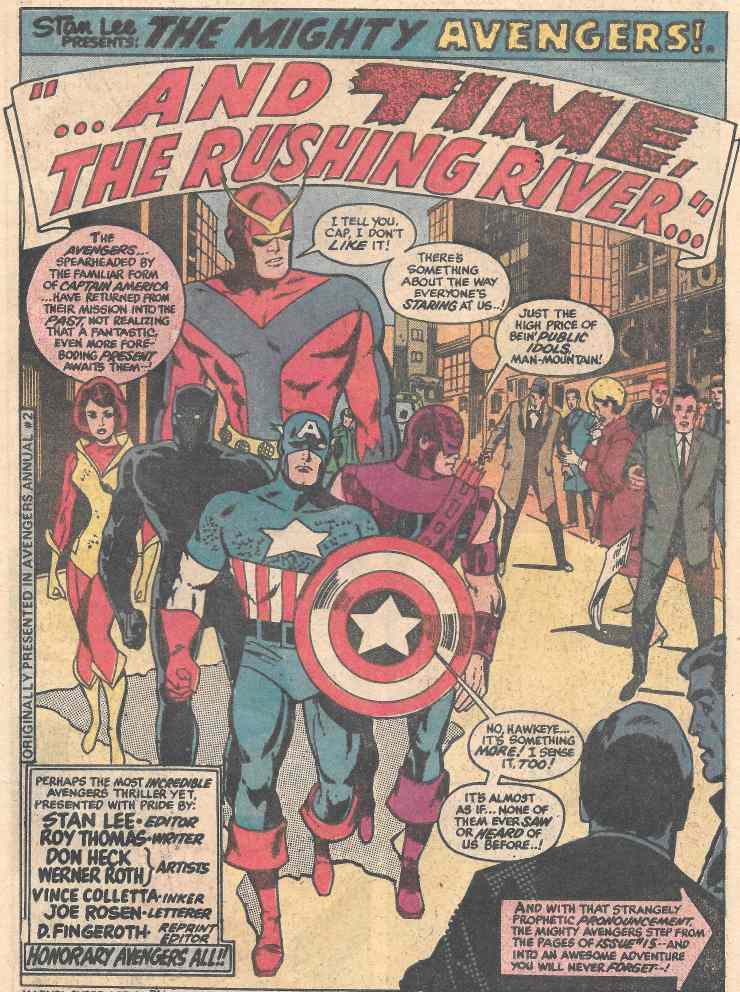 But that’s not why these Big Apple bystanders are unsettled. No, they don’t appear to recognize the famous five-some. It’s almost as if no one has ever heard of them before.

The Avengers don’t inquire with anyone why all the sock-eyed stares, preferring instead to just truck on to their current headquarters at Avenger’s mansion. They mention a bit about having just gotten back from Dr. Doom’s castle and an adventure where they were hurled through time, which might have something to do with the unsettled glances the New Yorkers throw at them. 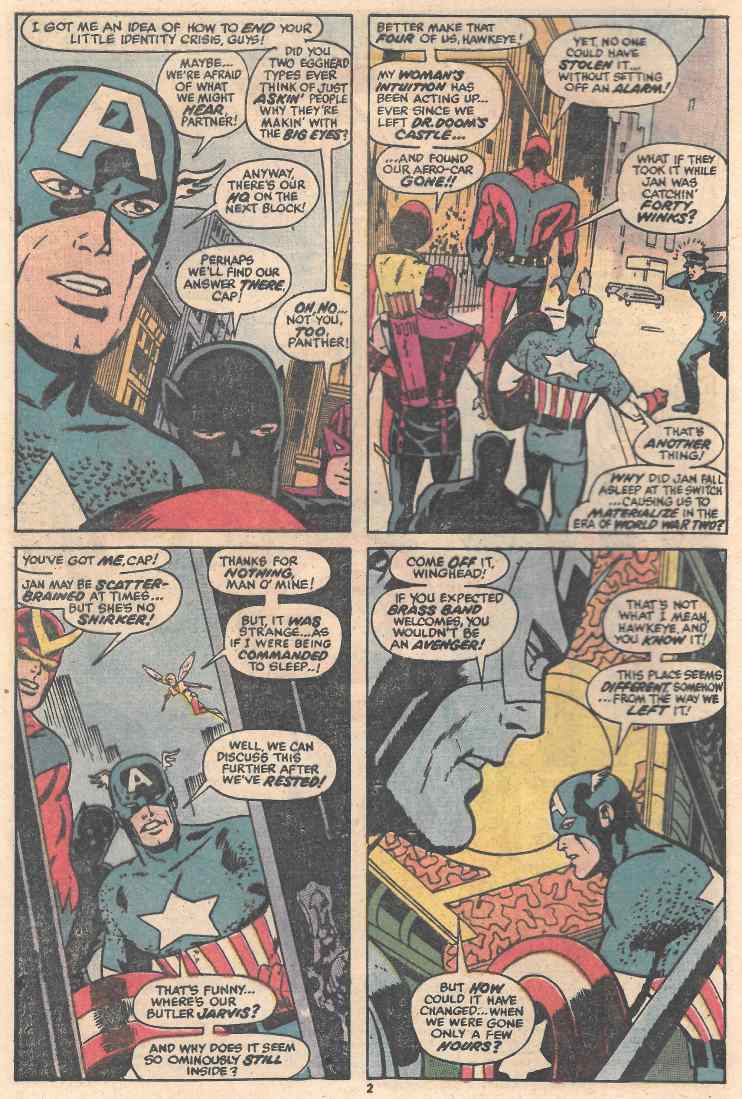 And when they arrive at the manor there are even more changes and surprises in store for them. First off: no Jarvis greets them, however something does provide them with a warm welcome. 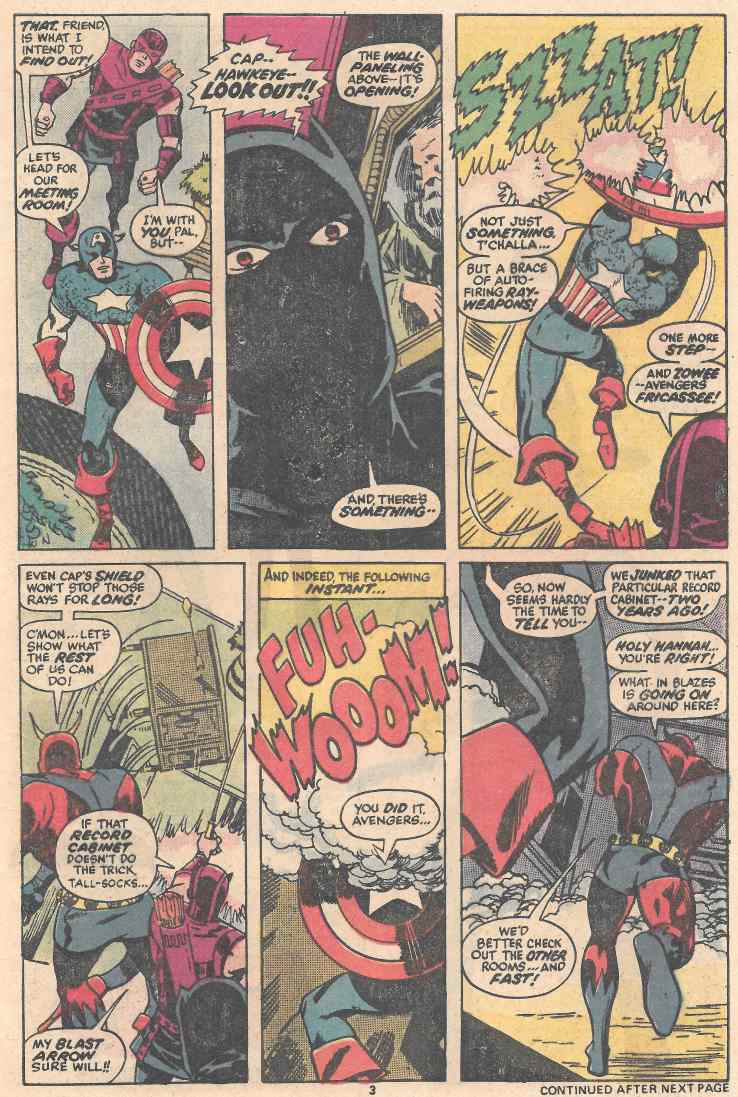 Blaster attacks and furniture from the past are not the homecoming they were expecting. And checking the other rooms will uncover an even more startling surprise awaiting them! 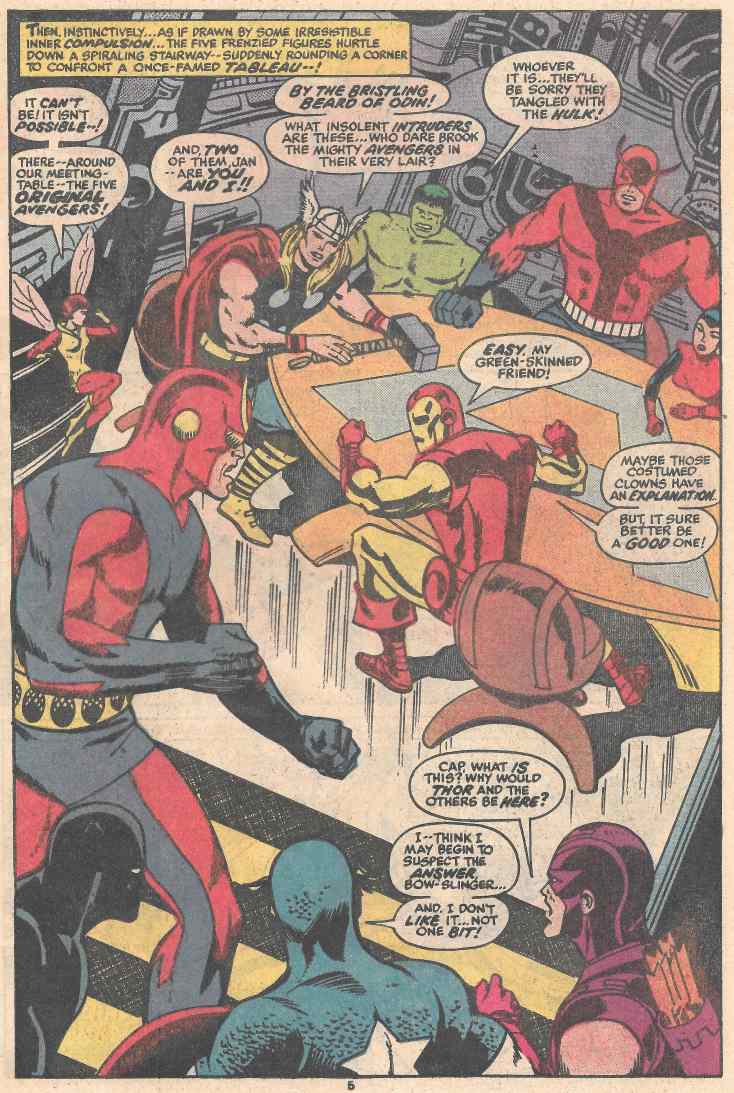 Now you’d assume these two groups would start things off with a quick chat to determine just what in Sam Hill is going on here, but that would be in the real world and this is comics. Nicely, there is a reason these carbon-copies of the First Issue Avengers are a little attack happy, but Lee saves that surprise for a few pages later.

Right now, what starts the opening salvo in this VERY uneven brawl of the two versions of the same super-team is Hank Pym smack talking Hank Pym until the Original reveals himself to be …himself. Look, it’s all very confusing to me too, but give it some time. All will be made clear, I promise. 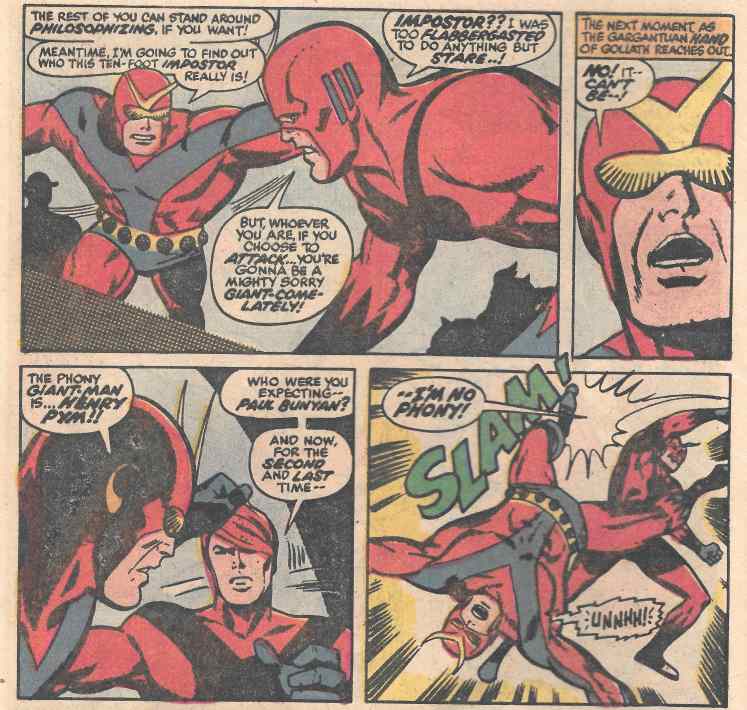 So old Giant-Man punches new Giant-Man and the sound of fist slamming skull is like the round one bell of a no holds barred multi-wrestler cage match. Everyone comes out swinging. Including… 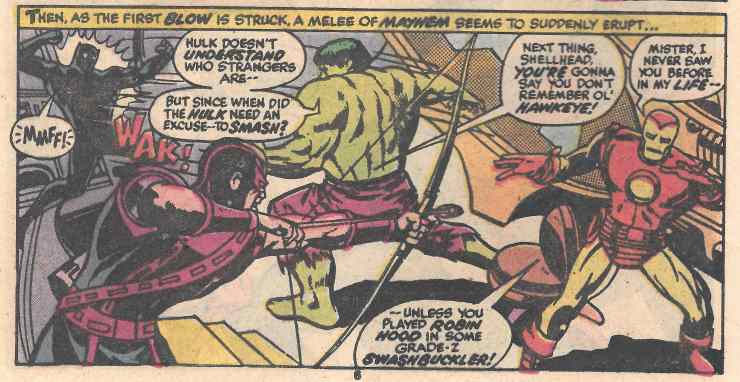 Black Panther vs. the Hulk and Hawkeye vs. Iron Man! Oh! Man! 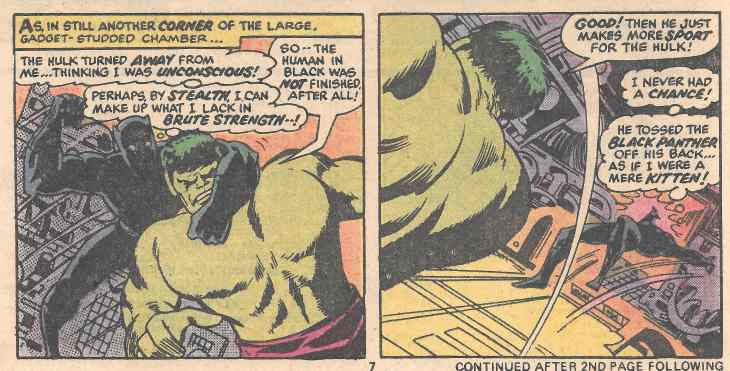 Jeeze! That has got to be one of the most uneven pairings in history. I’m a huge T’Challa fan, but there’s just no way he’s Hulk strength caliber. And this was old-school T’Challa, where the panther totem granted him physical abilities, but he wasn’t wearing sci-fi vibranium pseudo-armor. That’s just a fancy dress suit with claws. You do have to hand it to him, dude’s got a pair of brass ones to go toe-to-toe with ole’ jade jaws.

Meanwhile, Hawkeye gets a blast of repulsors while Cap takes on Thor, which is at least two of the Avenger’s biggest guns going at each other. Cap always has an edge over people with god-level strength, which is effectively dodging what he can and using his shield skills to put his vibranium shield between him and whatever blow he can’t. Perhaps all Panther needs is a shield, too. He’s certainly got enough vibranium lying around. 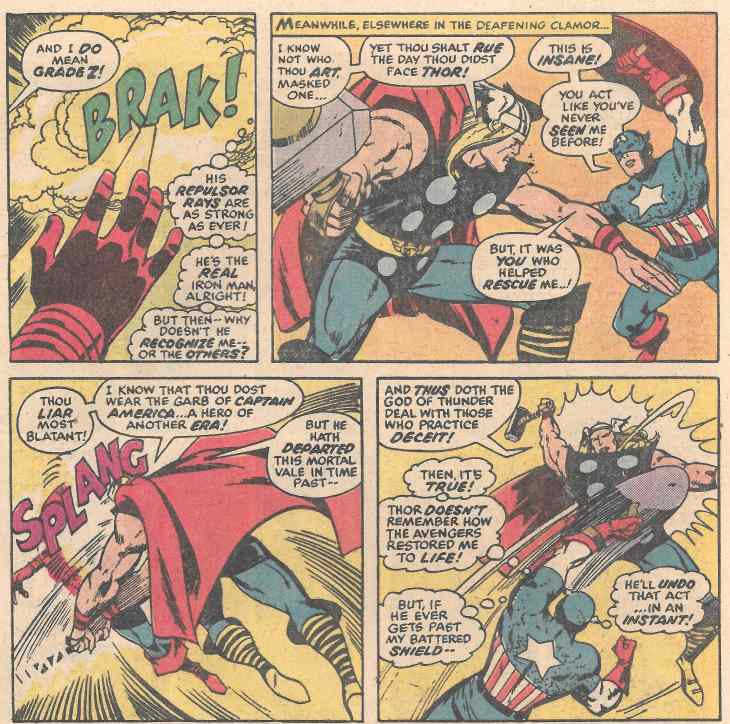 Anyway, this ends up a little more balanced a fight, at least in the first few blows. Cap doesn’t sound hopeful that he can keep Thor down, however.

The group is rescued by Giant-Man and a repulsor-shaken Hawkeye, who team up to create impediments to the Original Avengers that allows a strategic retreat. The OA, as I’m going to call them, appear to be determined to find the NA, however. 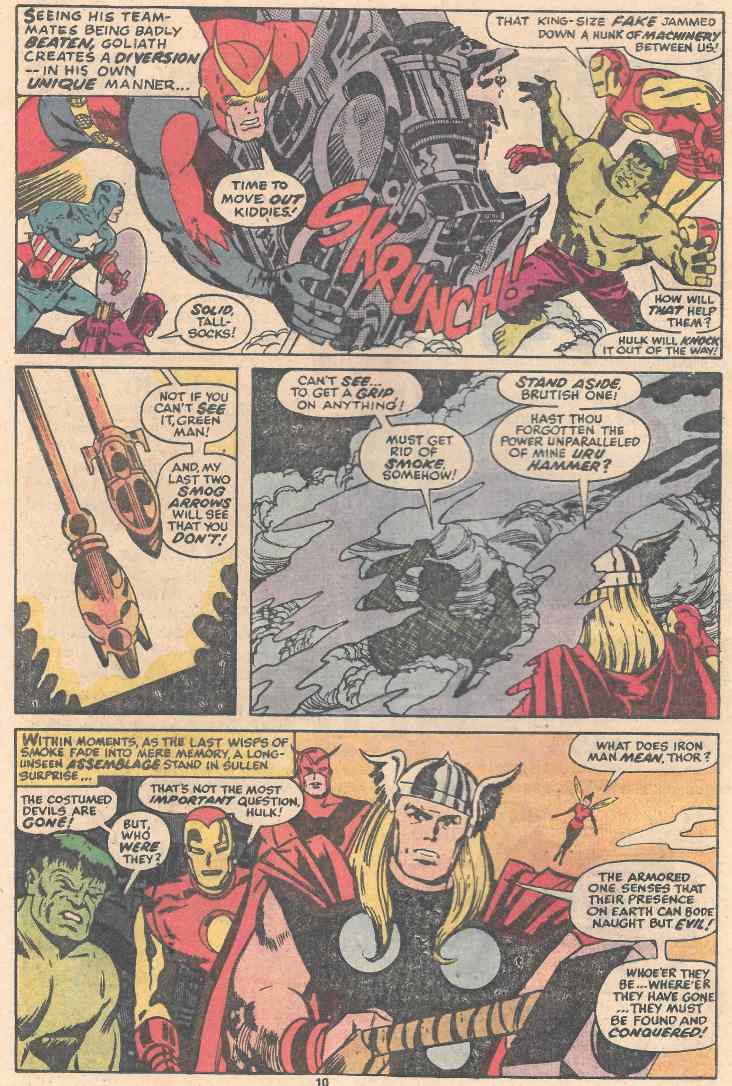 In one of those many long-abandoned subway tunnels the riddle New York underground like so much Swiss cheese, the group meets and decides all this has to be because of Doom’s time machine tampering with the nature of reality to the extent that their version of the Avengers no longer exists. 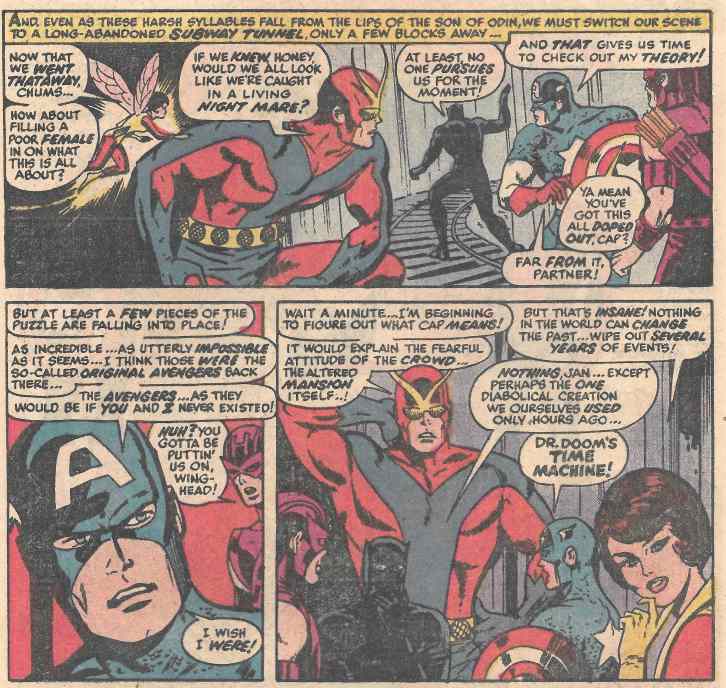 As clue to how this might have come about, we turn back to the Original Avengers who are meeting with a mysterious ally… 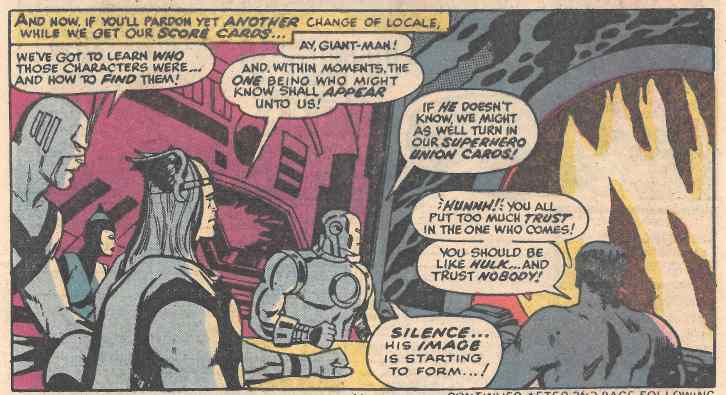 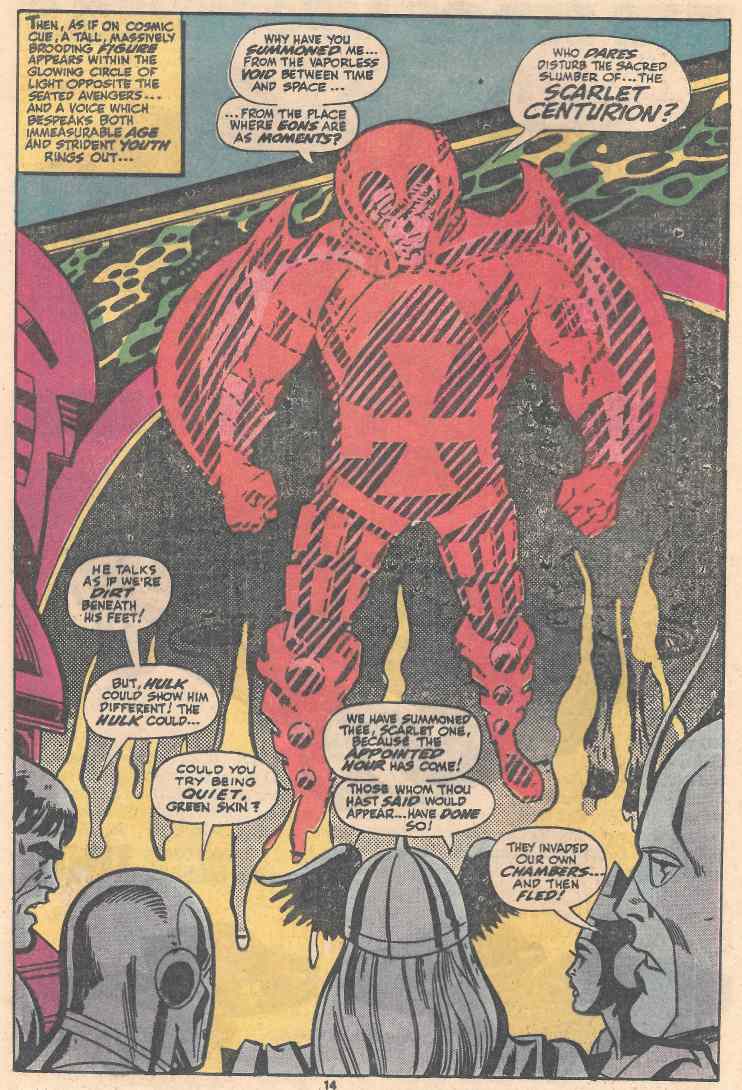 BIG RED! Okay, I kid! I kid! The name Scarlet Centurion doesn’t ring any bells with me as a big-name Avenger’s threat so I’m going out on a limb here to state I think he’s really another villain in disguise. Likely Kang, since time-travel and destruction of the Avengers so they can’t get strong enough to defeat him in the future is his all-consuming goal. I’m going to check Wikipedia.

Sweet jeebus! Yes, I’m right. It is Kang. Or a version of Kang. A Pre-Kang. A Proto-Kango. One of many. Kang is one of the most convoluted characters to ever exist in a comic book. He changes names and becomes other people and then gets mad and fights HIMSELF from different time eras so often that most of the time you don’t even need heroes to defeat him. He is one mixed up dude.

But enough! We know who our big-bad is. Let’s move on to what his sinister evil plan is. 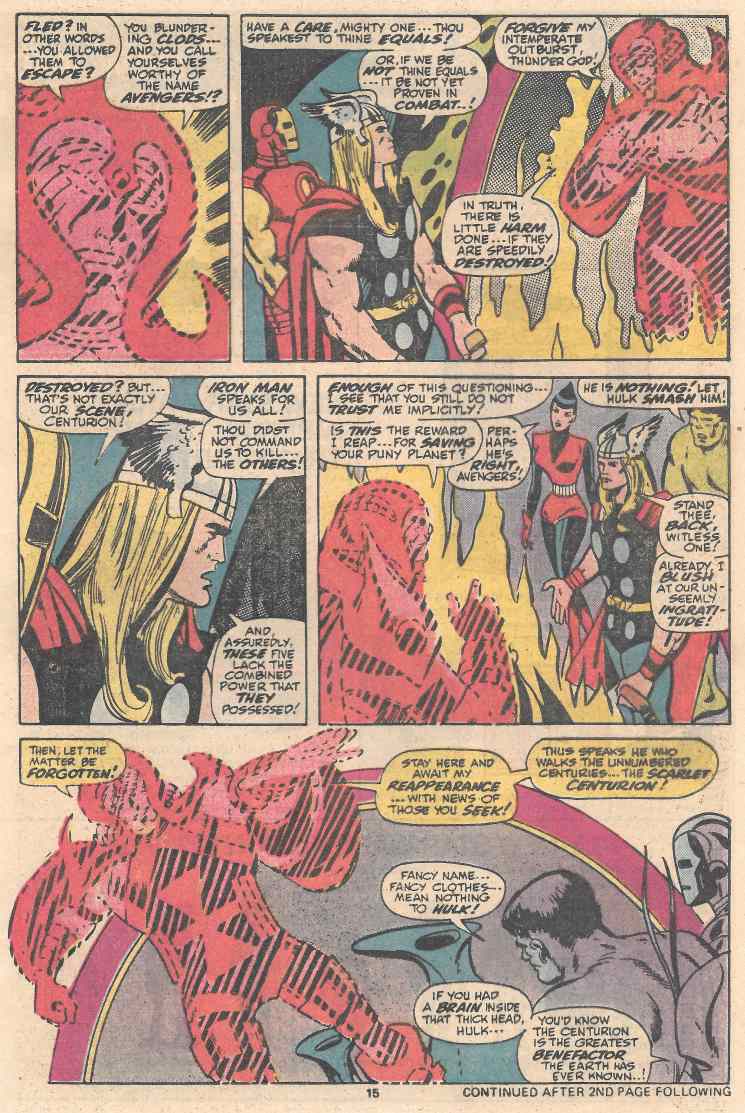 So basically he’s got the Avengers on his leash, doing his bidding in exchange for his help. They appear willing to go only so far though, stopping at the point of actually taking someone’s life. WHY they are doing this isn’t quite clear.

For the reason behind that we’ll have to switch back over to the Avengers from the normal timeline going to a university to access a device called the Herodotron that can infuse a person with historical data. 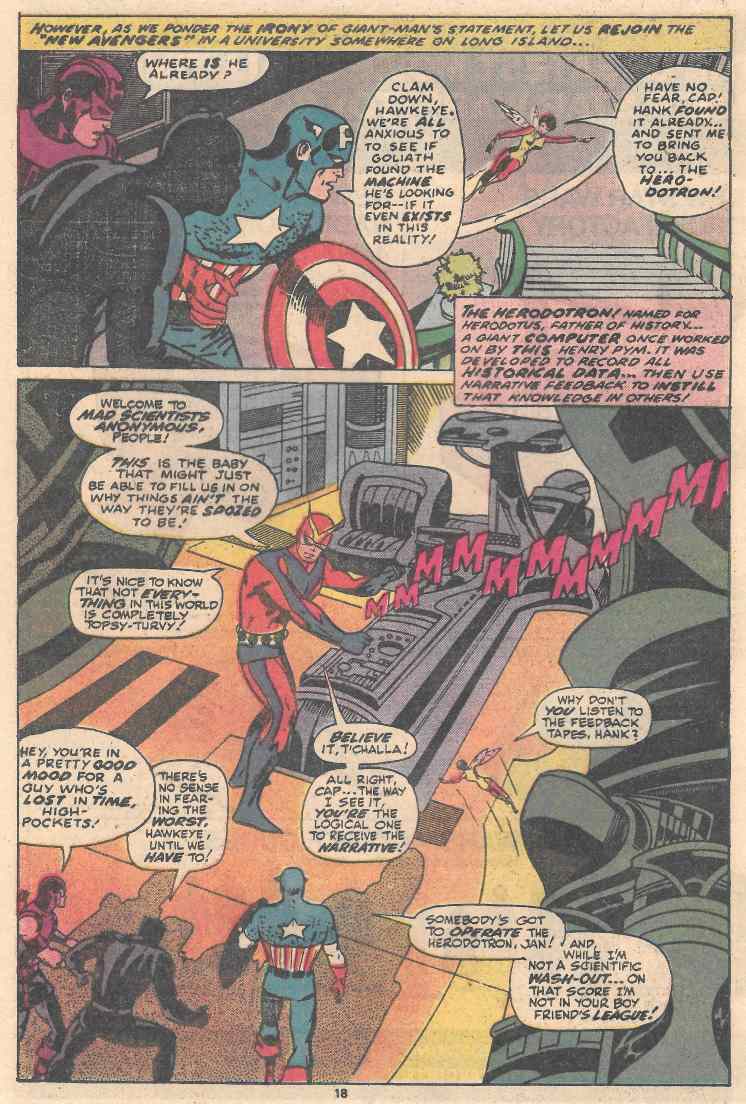 Cap gets selected for this little trip down memory lane and after strapping the star-spangled Avenger in, Pym throws the switch and we can begin our extended flashback… 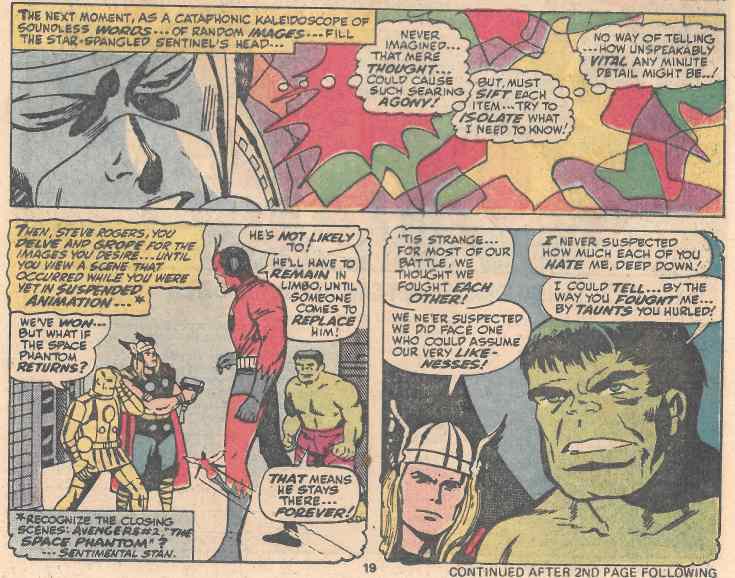 When suddenly a red figured appears out of thin air, stating he is there to aid them, but they must stay together. With a kind of a “I’ll be in touch” kind of thing he vanishes again… 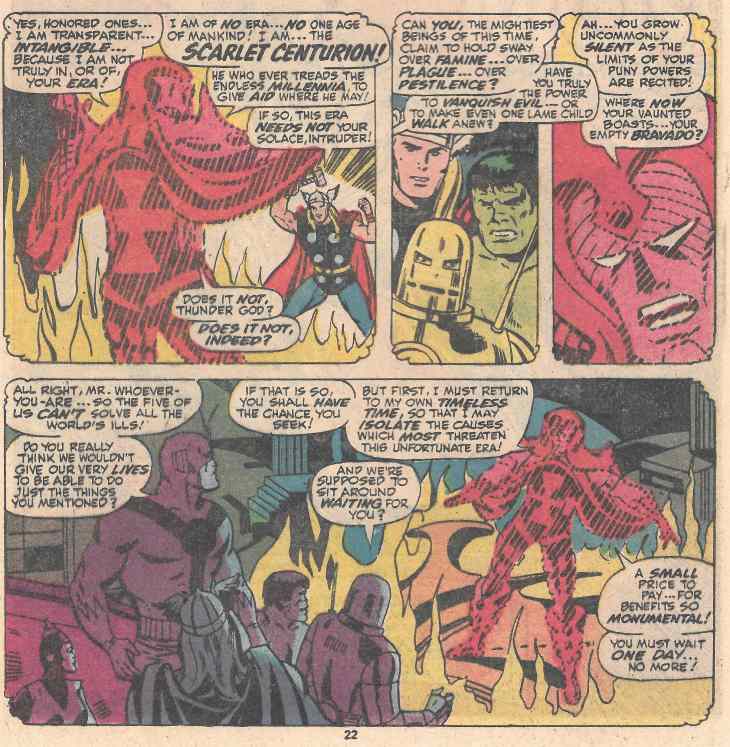 This intrigues the five supers, so much so that Thor puts forth the idea that perhaps the Scarlet Centurion is actually The Watcher. Whatever they think, the group stays together long after they would original have split apart. 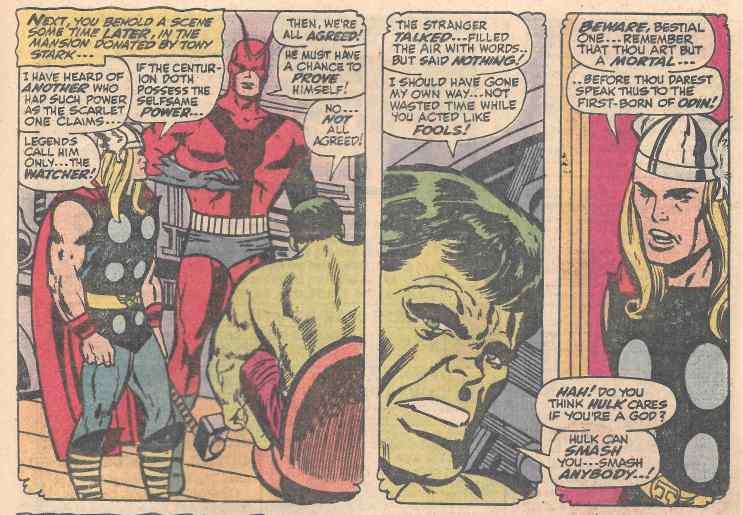 And right about the time that tempers do start to flare up, the Centurion sends them a missive with a mission. And that mission is simply defeat and jail anyone with superpowers. 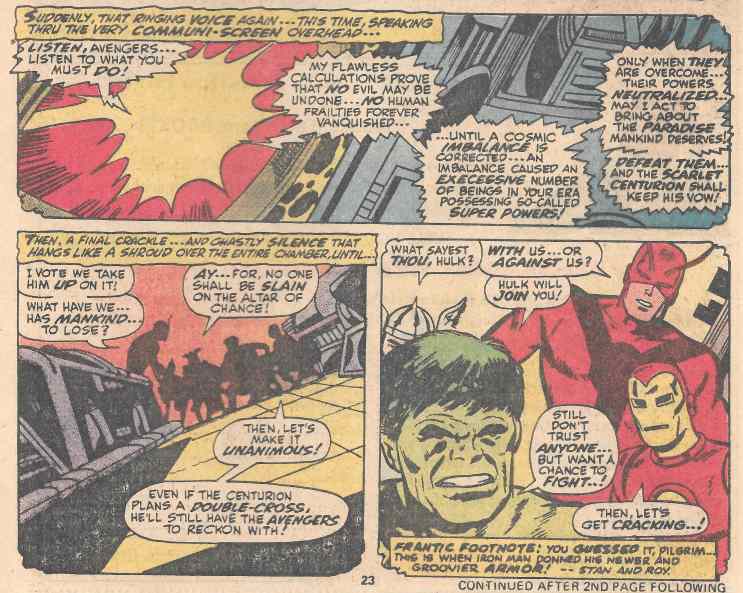 Anyone. And that includes the Fantastic Four, Spider-Man, and the original X-Men. With the Centurion pulling the strings, those heroes are hit at their weakest, when they least expect it and are…not killed, I suppose, but jailed I guess. 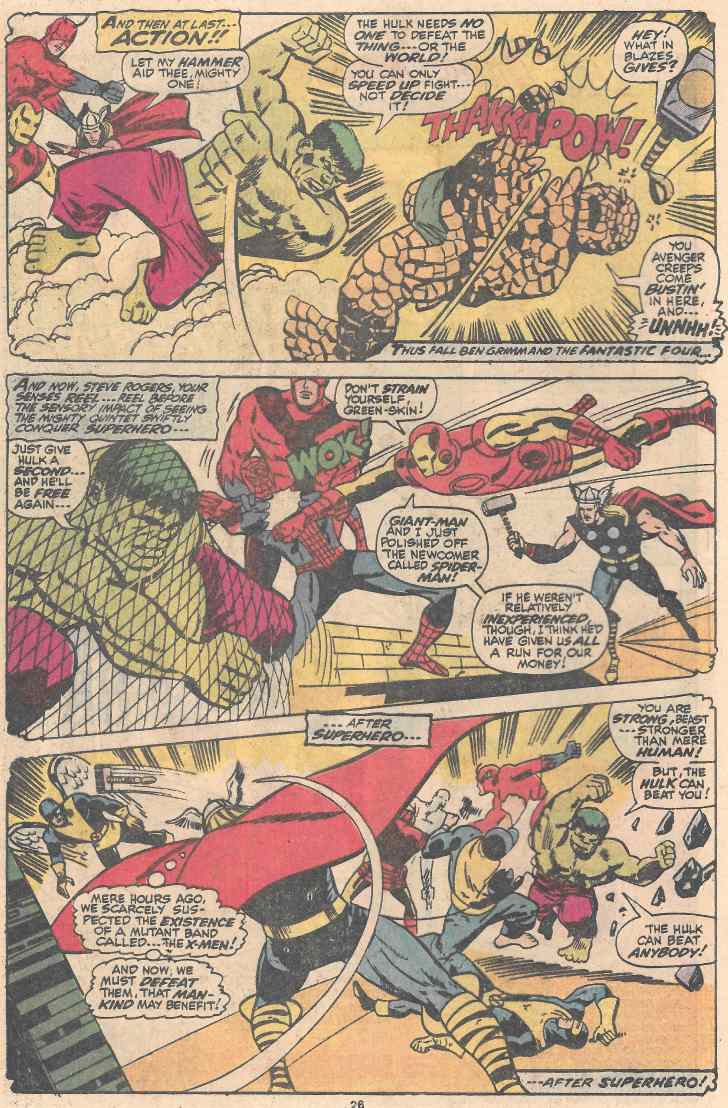 But more than just heroes are taken down with the Centurion’s help. Villains get captured too. Operating from the future means he becomes the Avenger’s most valuable ally in fighting evil. Even while being the very evil that will eventually conquer them and the Earth. 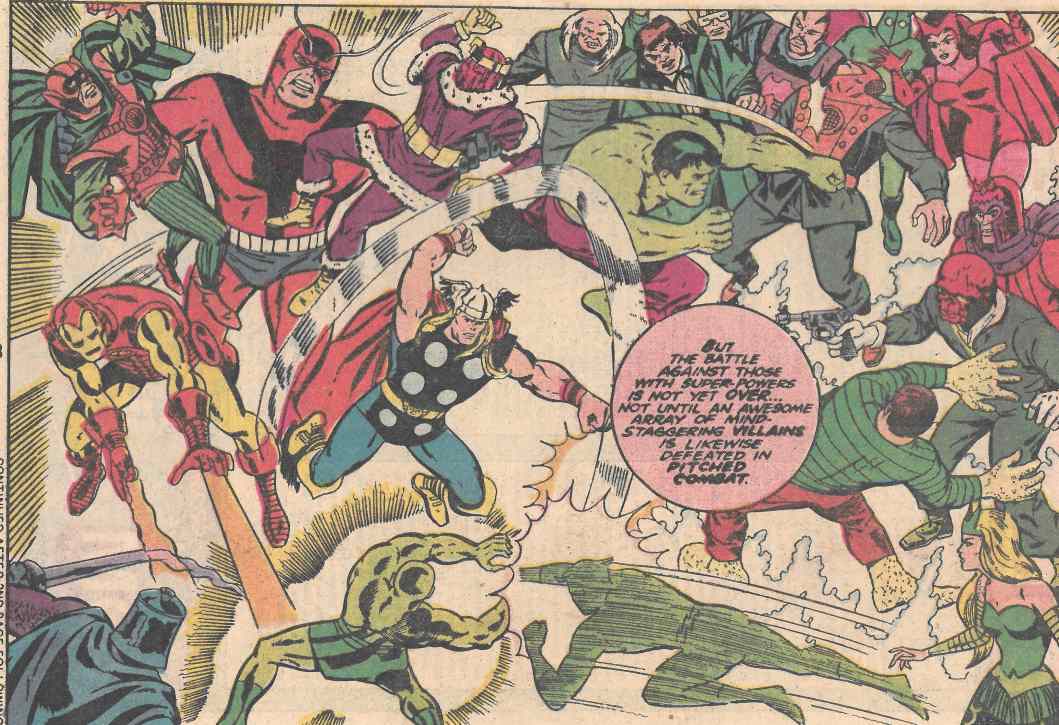 The last few villains are shown hiding out with Dr. Doom, who laments the loss of his Time Machine, which has been dismantled by the Avengers before he could use it to destroy them in the past. Which would have really made this story go off the rails by introducing yet ANOTHER timeline into this mix of Terminator Genisys-sized history plotholes. 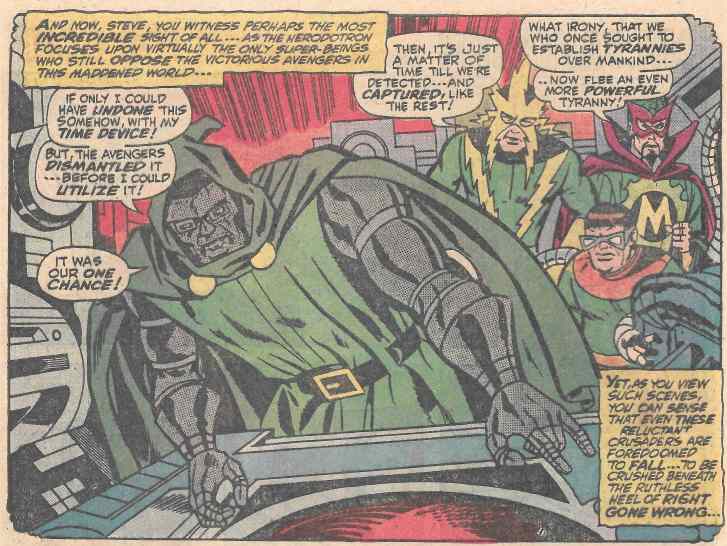 But while the baddies skulk around quietly, the Avengers and their red colleague take over mankind, shutting down all scientific research and destroying freedom in the pursuit of security. It’s a tough balancing act, I know, but the Avengers I remember wouldn’t kowtow so easily. The only one of these guys I could really see falling for this would be the Hulk, as his fellow Avengers should have the common sense to see the path they are going down ends it despotism. 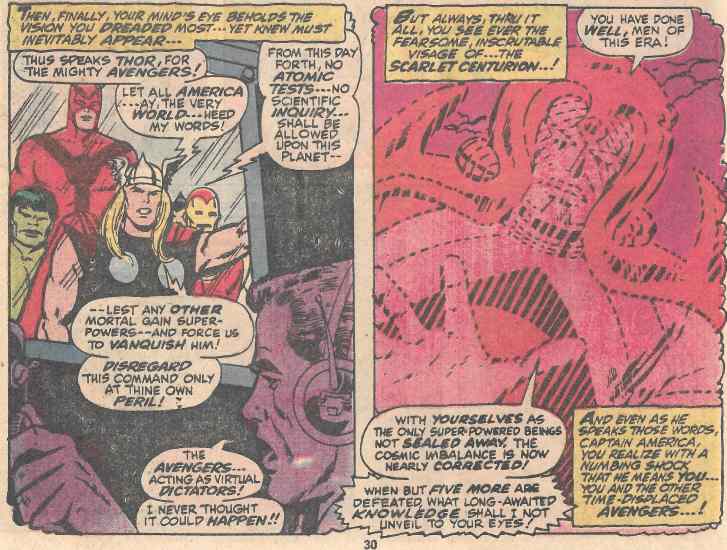 And of course, good old SC knows the Avengers will face their future version in a short time and he prepares them by warning of this coming conflict in the most dramatic of terms. Thus insuring they would attack our heroes on his word which is how the conflict in the beginning of the book was set up. 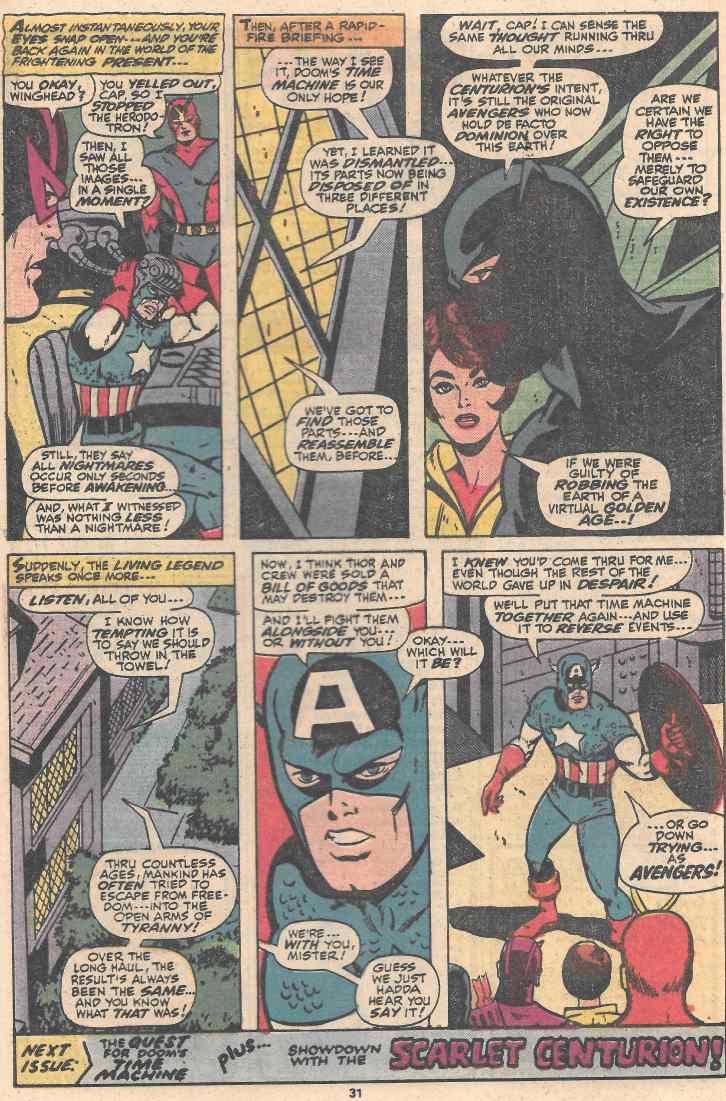 Armed with this knowledge, Cap informs his team of what they are up against. Plans are discussed, including the option of leaving the hero biz altogether since this is a supposed utopia. Having seen where authoritarianism leads first him, Cappy sets everyone straight. So the next issue of the reprint mag (or the final half of Avengers Annual #2) has them carrying out a daring plan to steal back the pieces of Doom’s Time Machine and reversing the damage the Centurion has done to the timeline.

It’s sad that such a rip-roaring tale was saddled with such horrible art. I’m not a Don Heck fan, but even he deserves better than the blobs and blots that Colletta’s inks turn each image into. The yarn is a fun one though and I found myself fully engrossed in it. I’m certain the next issue’s punchfests would have been fun to see.

Posted by SonOfCthulhu at 2:55 AM