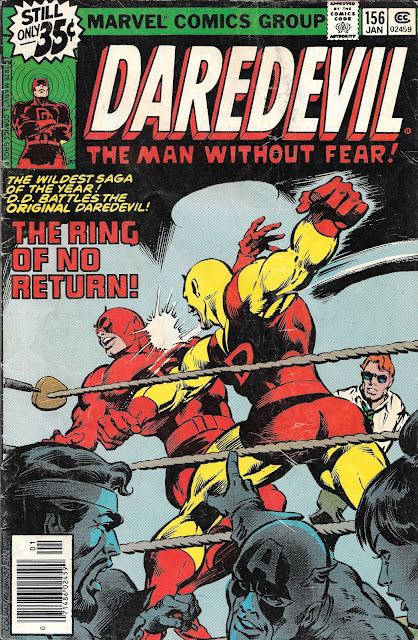 Part 2 of “Stop Hitting Yourself!”

Up next, we hop over to the Marvel side of the aisle and look in on that man without fear, ol’ horn head himself – Daredevil.

Today’s tale is something he’s going to have a devil of a time explaining, because he’s leaping into the ring against a version of himself wearing his old red-and-yellows. Who will come out on top? How did this even happen? These questions and many more will be answered below.

We begin our tale with Daredevil confronting his sweetheart of the moment, Natasha Romanoff A/K/A the Black Widow, while standing over the mostly unconscious bodies of his foes. Which is saying something as his foes this time out appear to be three Avengers. Looks like I should try bin diving for Daredevil #155 to see how one blind lawyer was able to defeat the Beast, Hercules, and Captain ‘frigging America. 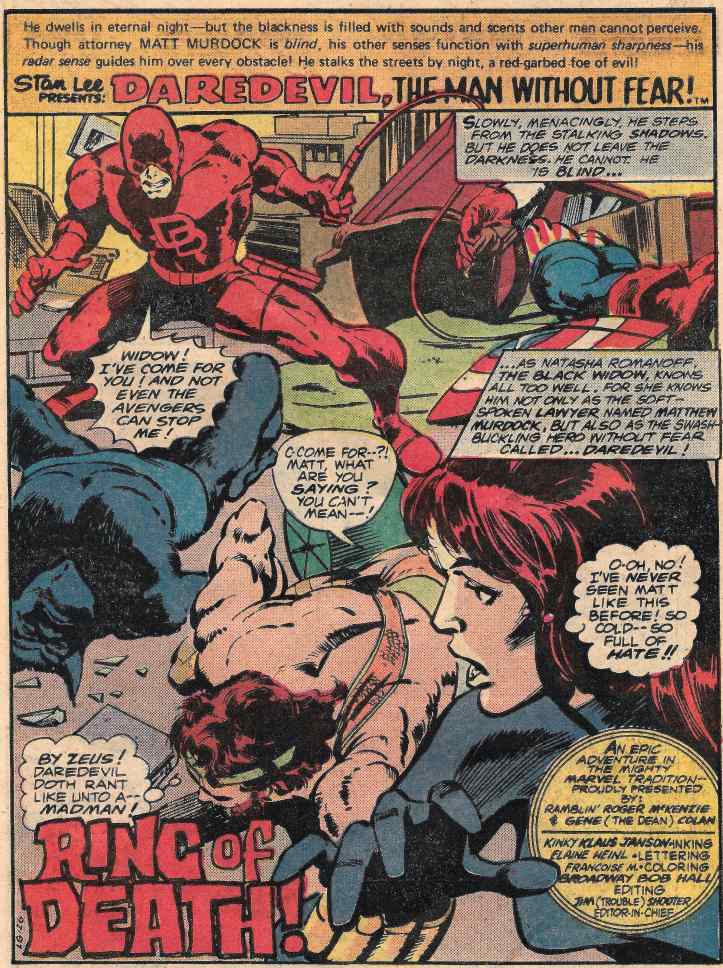 For now though I’m just gonna soak up the goodness of Kalus Janson’s inks over arguably talented Gene Colan pencils. Janson makes this page hum with energy and raw power, but if I’m honest even I have to work hard to ignore whatever is going on with Daredevil’s left calf? Is that a tumor? He should probably get that looked at.

In all the way he’s drawn and colored (thank you, Francoise M.) really makes him pop off the page in a way that draws you right into this story. Which is basically this: Daredevil is insane at the moment.

Want proof? He tries to strangle Black Widow with his billy club cable, a move that isn’t very DD like. 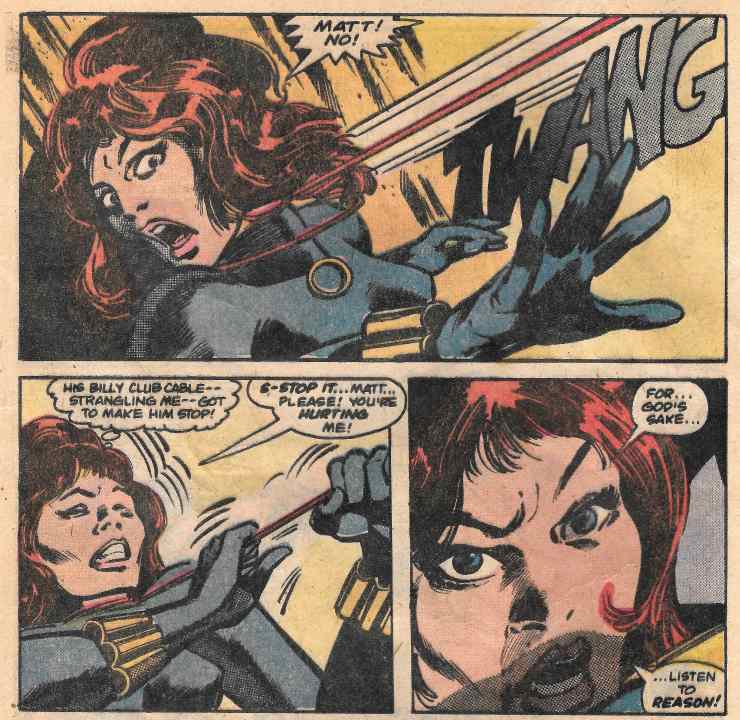 She tries to reason with him…

…but he has gone totally off his rocker. I’m thinking he has a concussion or something. Little else would explain the hero’s actions so far in this story.

And don’t worry about the Widow. She isn’t in serious trouble, she just doesn’t want to injure her lover Matt Mudock further. Push come to shove though… 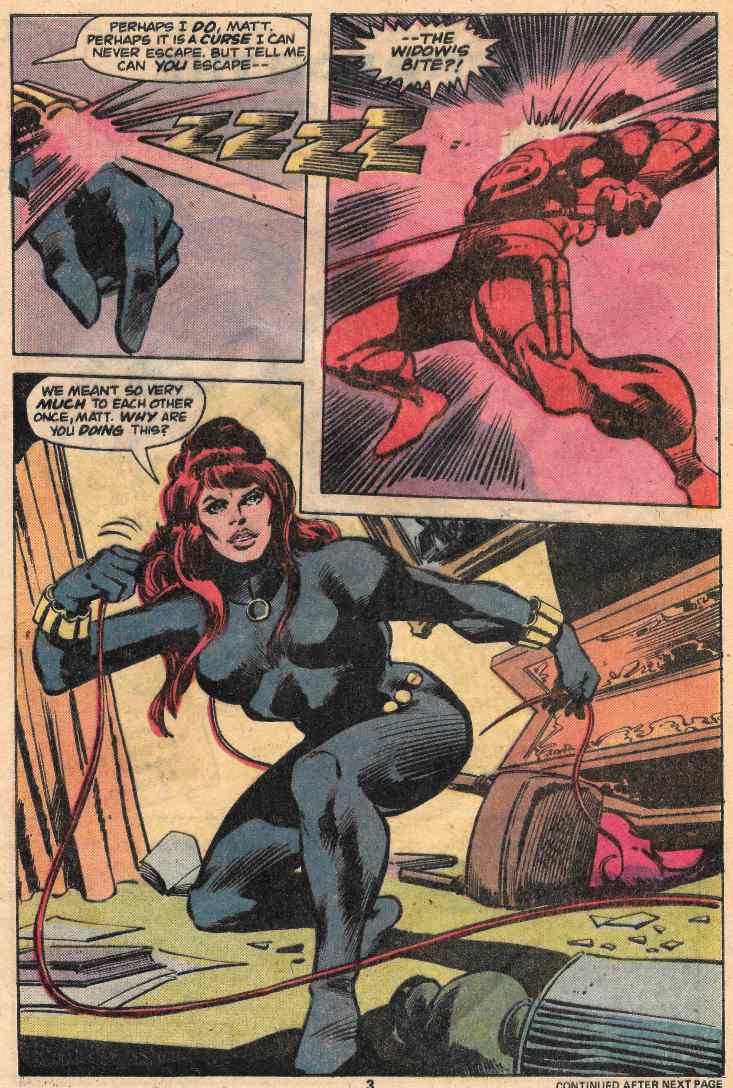 … It only takes one shot from her widow’s bite hand cannon to make him let go.
Unfortunately, this is Daredevil we are talking about here. And the son of Battlin’ Jack Murdock isn’t one to lie down after taking one shot. Nope, he’s up and using Cap’s shield in the next second… 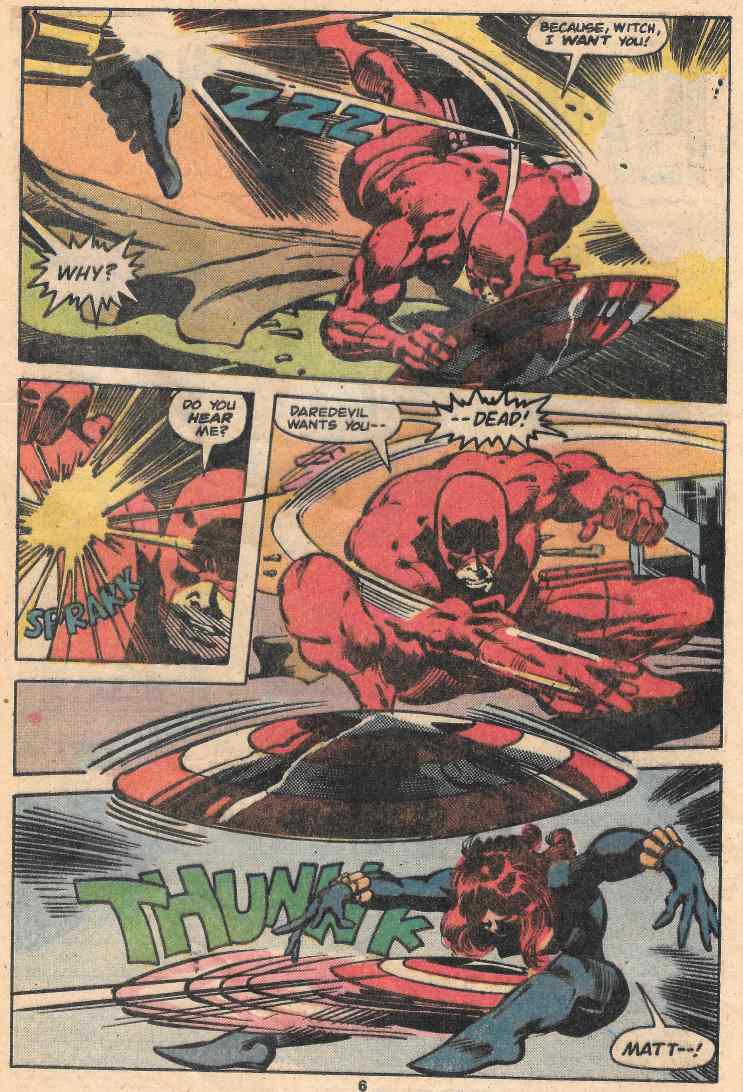 …to lay out the Black Widow.

And then he seizes over in guilt at what he’s done and collapses. Just sayin’ that I’m glad he’s fighting friends and not enemies at this point. 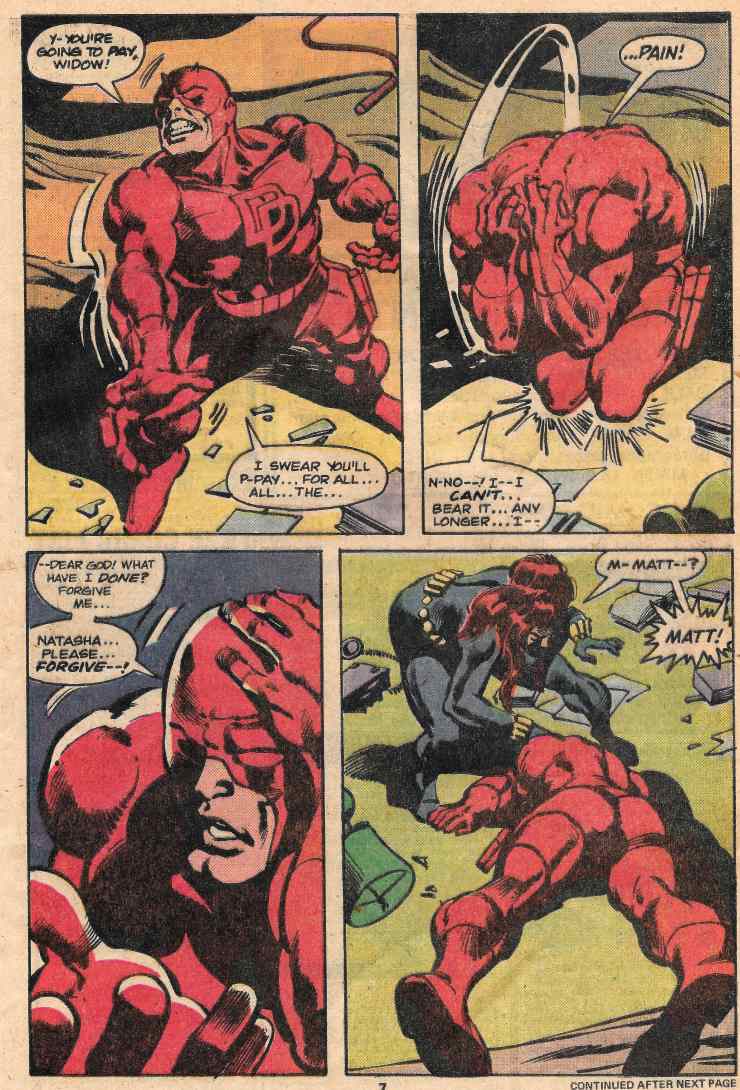 Right about then the Avengers come to. Cap is all fired up to help, but Beast takes more of the approach that I would take. And of course everyone yells at him over being sensible. 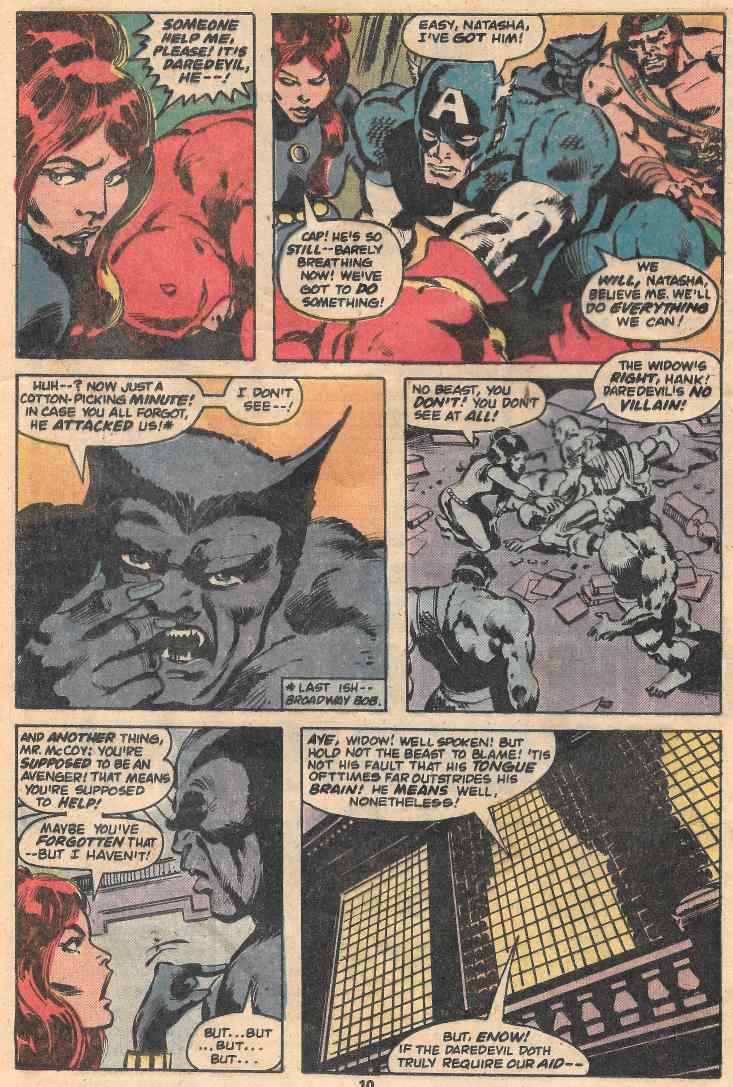 So the Avengers rush the unconscious DD to a hospital and while his insurance might cover his treatment, it looks like the Avenger’s insurance is going to have to cover Herc’s treatment of the manor’s front entry doors. Come on, Herc! The sign CLEARLY said “pull”. 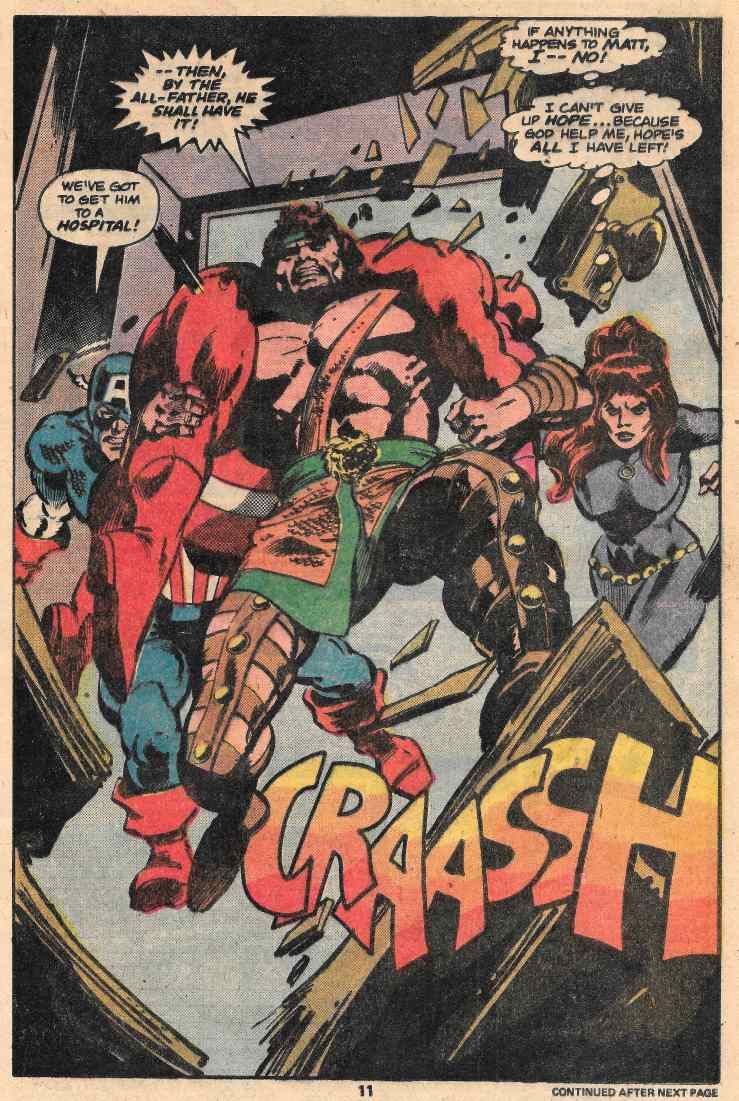 It is here at the hospital that the Avengers foursome learns some troubling news about horn-head’s condition. Poor fella has slid into a coma despite their door-busting efforts to bring him here. Over Hercules’ insistence, the doc puts his foot down that Matt isn’t to be disturbed. 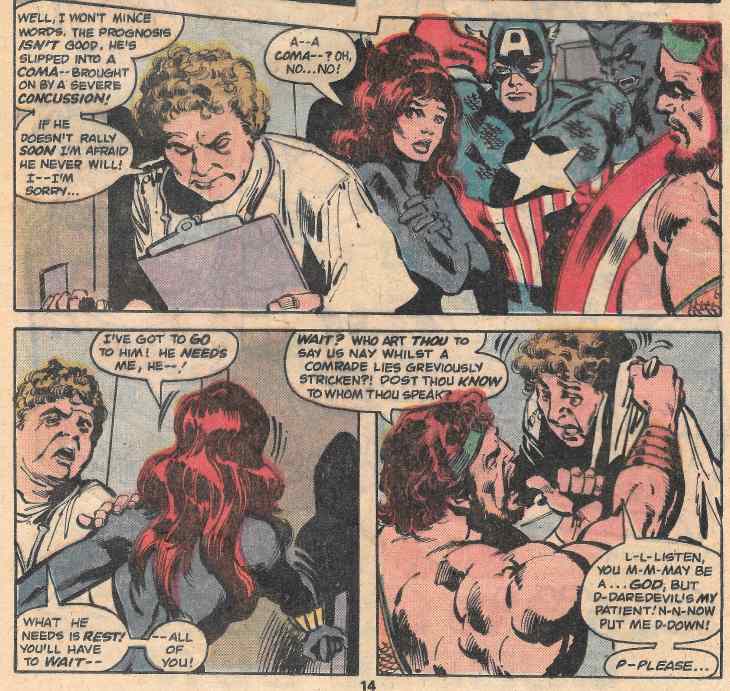 And while most of this feels like an okay, in continuity thing, writer McKenzie suddenly writes the Beast as if he is a lunatic, having him rush from room to room and sexually assault a nurse. I know this was a different era, but seriously this couldn’t have been acceptable practices no matter when this story was set. To make matters worse, Beast was always the scholar of the X-Men. Certainly, he has the appearance of a wild animal, but Hank McCoy could always comport himself with dignity and courtesy. 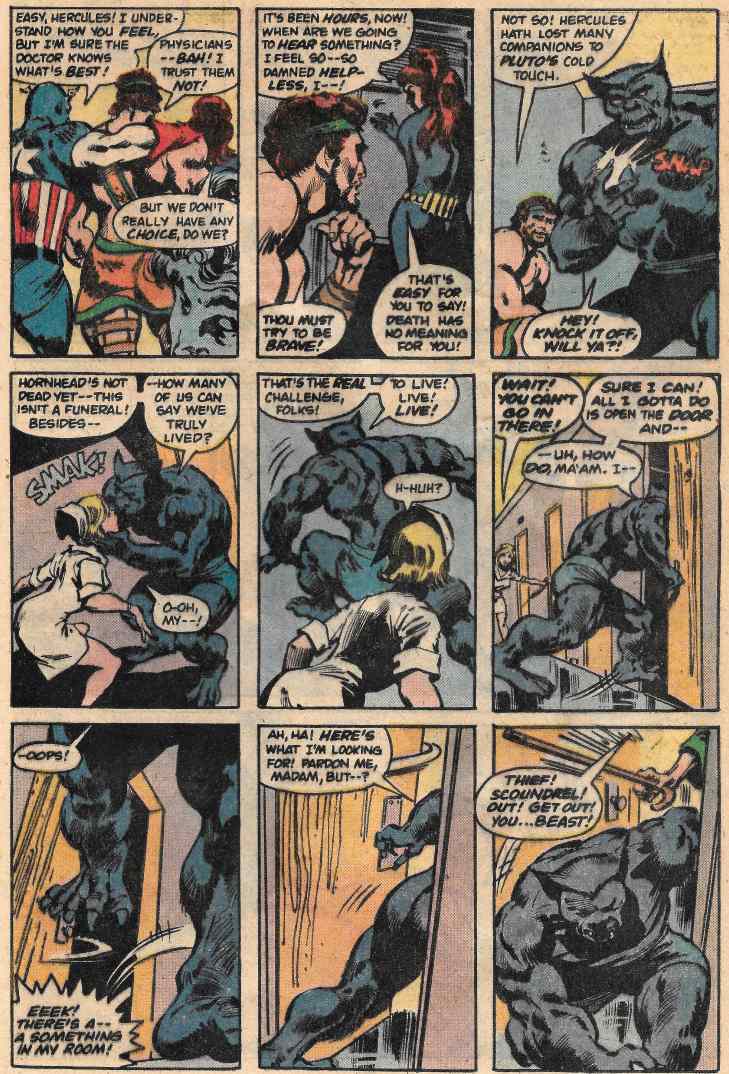 All of this so that Hank can steal a rose from a patient to give to Natasha. So…out of character. 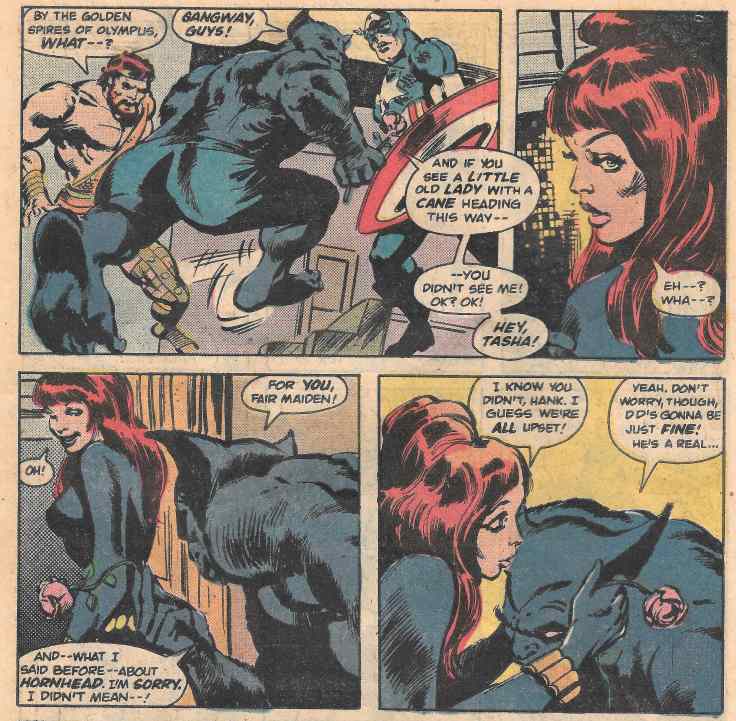 Meanwhile Matt may be the first coma patient to mutter in his unconsciousness. Something about being a “real fighter.” Let’s see what’s going on in that head of his? 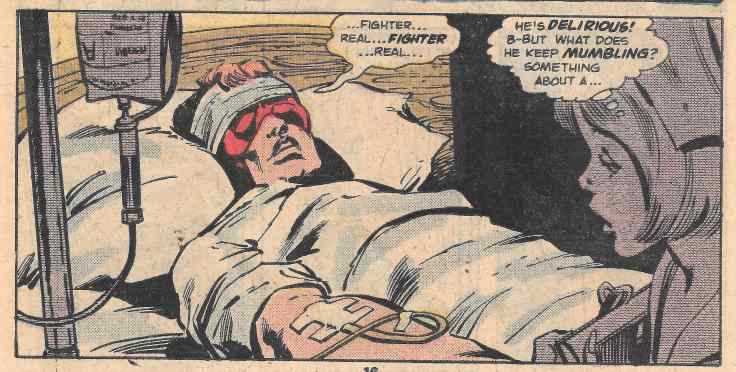 Looks like ol’ DD is dreaming of a boxing ring. And while his father, the actual “Battling Murdock” is by his ringside corner giving him tips, Matt’s blind lawyer self is stating that this mystery figure wearing a robe emblazoned with his father’s boxing handle is going to clean his clock. Who could that be, you wonder? 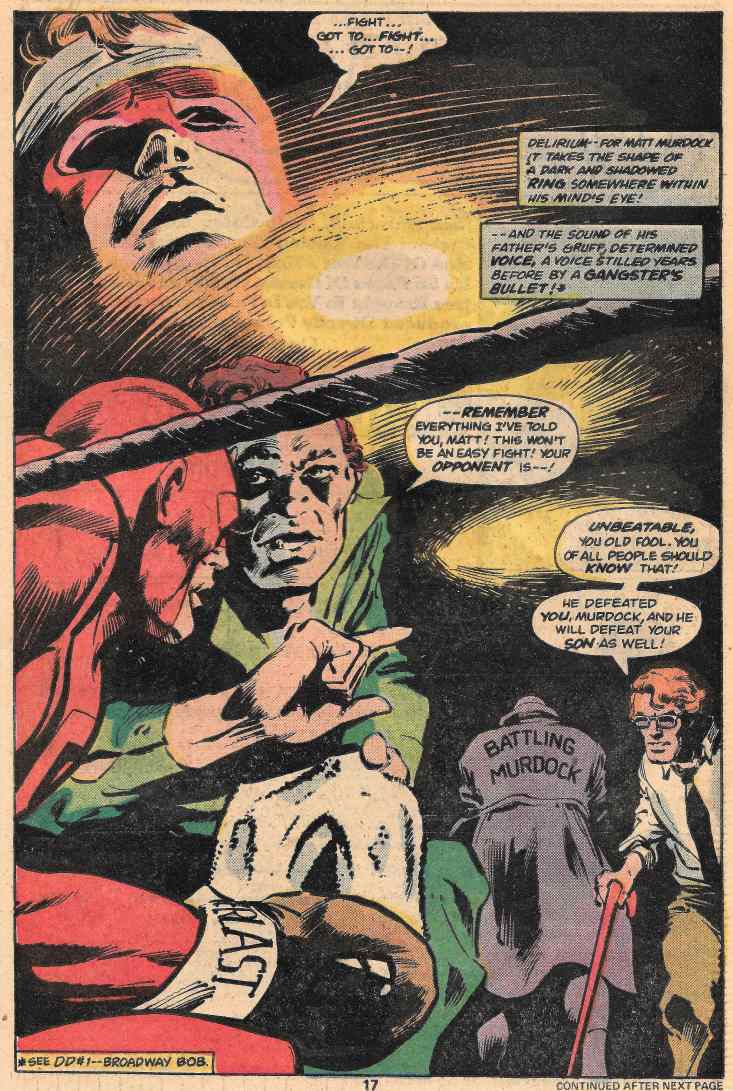 As the bell opening the first round rings out, Daredevil uses all his superpowered skills to get the skinny on the opponent he faces. It is a starling revelation! 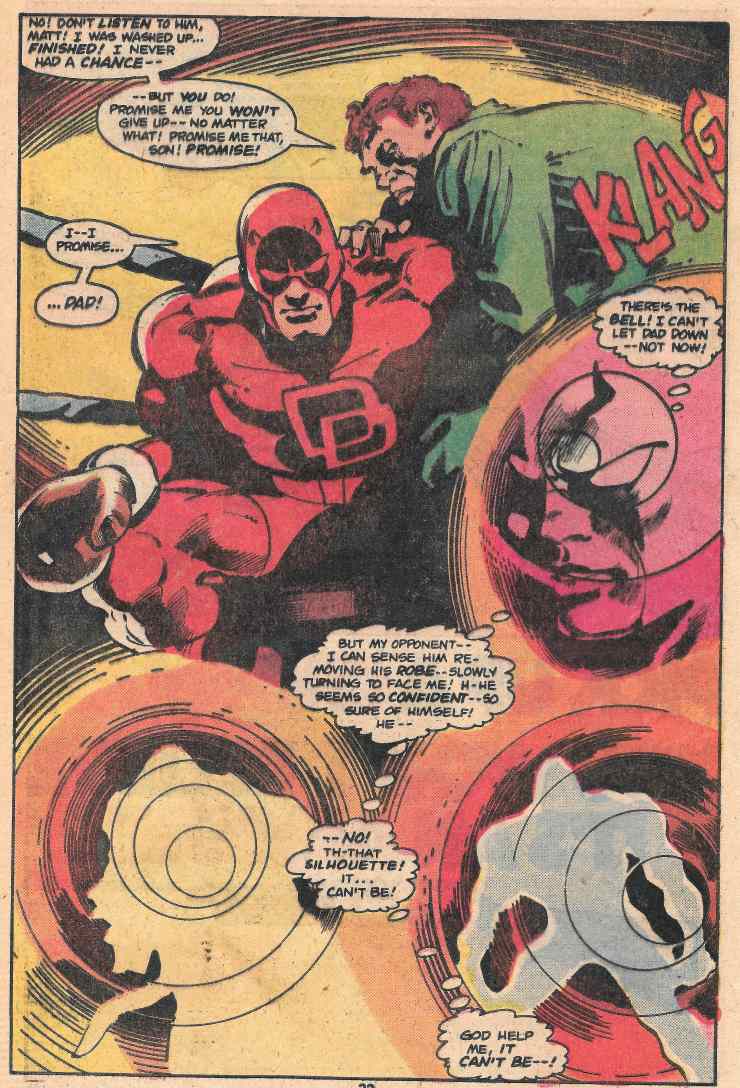 Well, not to us silly. We’ve seen the comic book cover. His enemy in this coma boxing match is himself in his old red and yellow uniform. 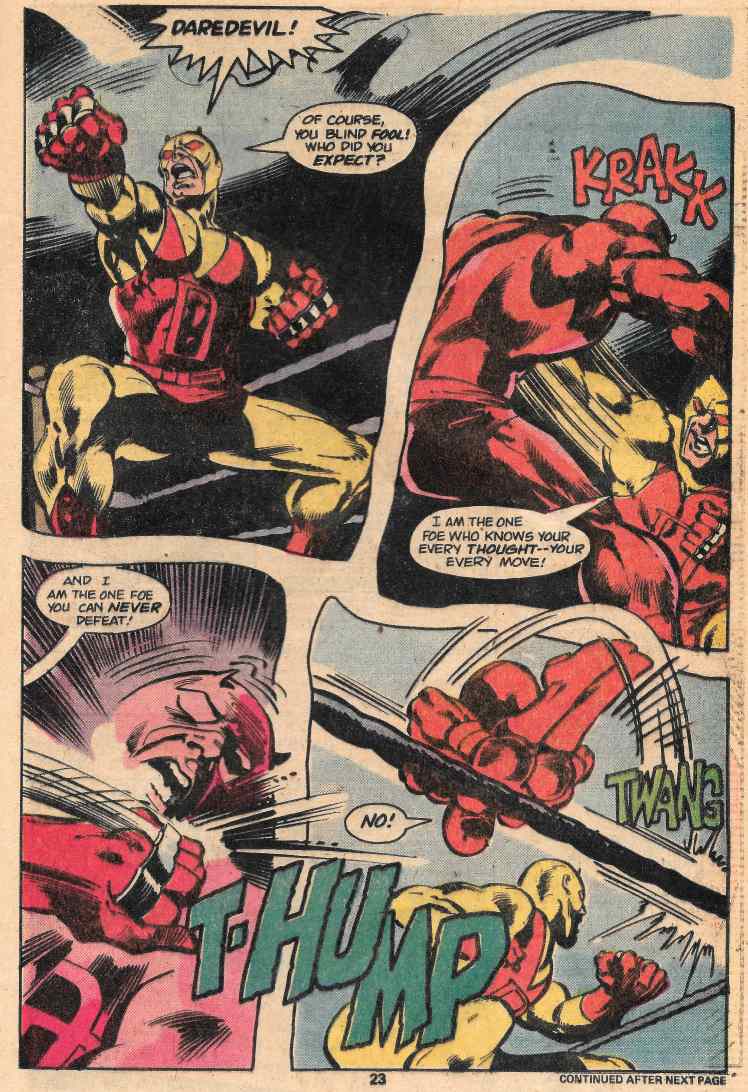 At this point Janson and Colon do some amazing fight scenes with these two Daredevils. This is actually a great, kinetic action sequence. 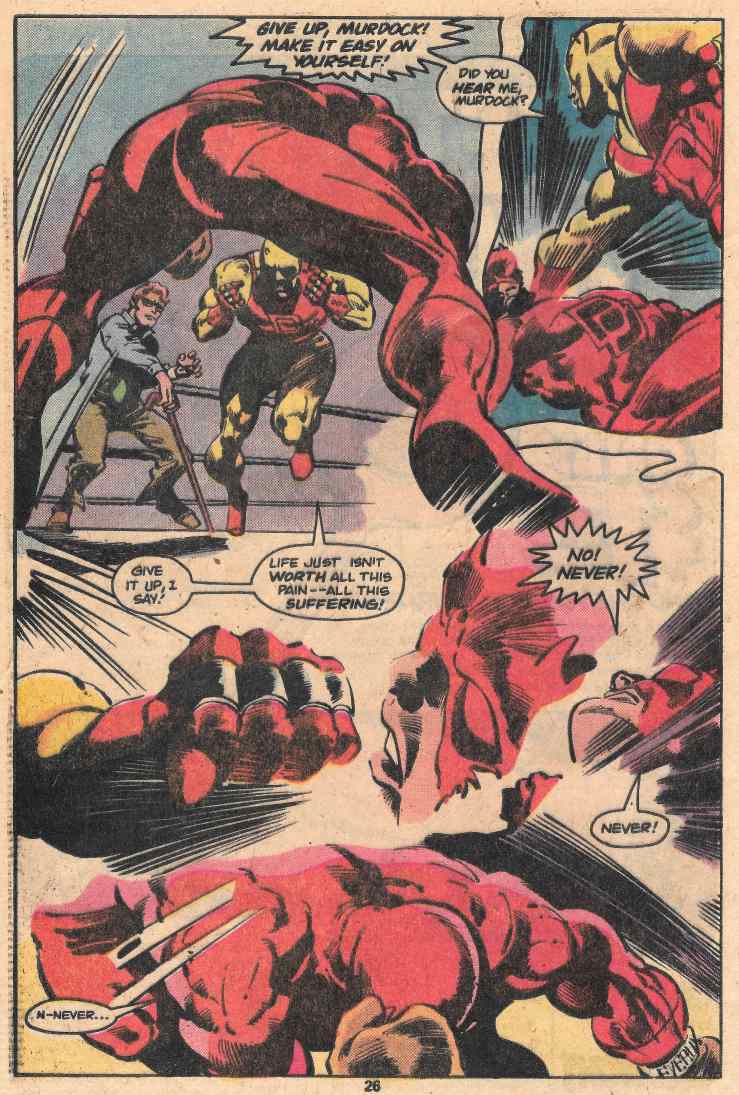 And since this is a metaphorical sequence in which Matt is fighting for his life, we can intersperse pictures of the actual grim reaper in here as Daredevil’s opponent. This entire sequence is supposed to show Matt’s never-say-die spirit, cultivated by his father, who did everything he could to raise Matt right. It is a neat little sequence with astonishing, highly emotive panels. 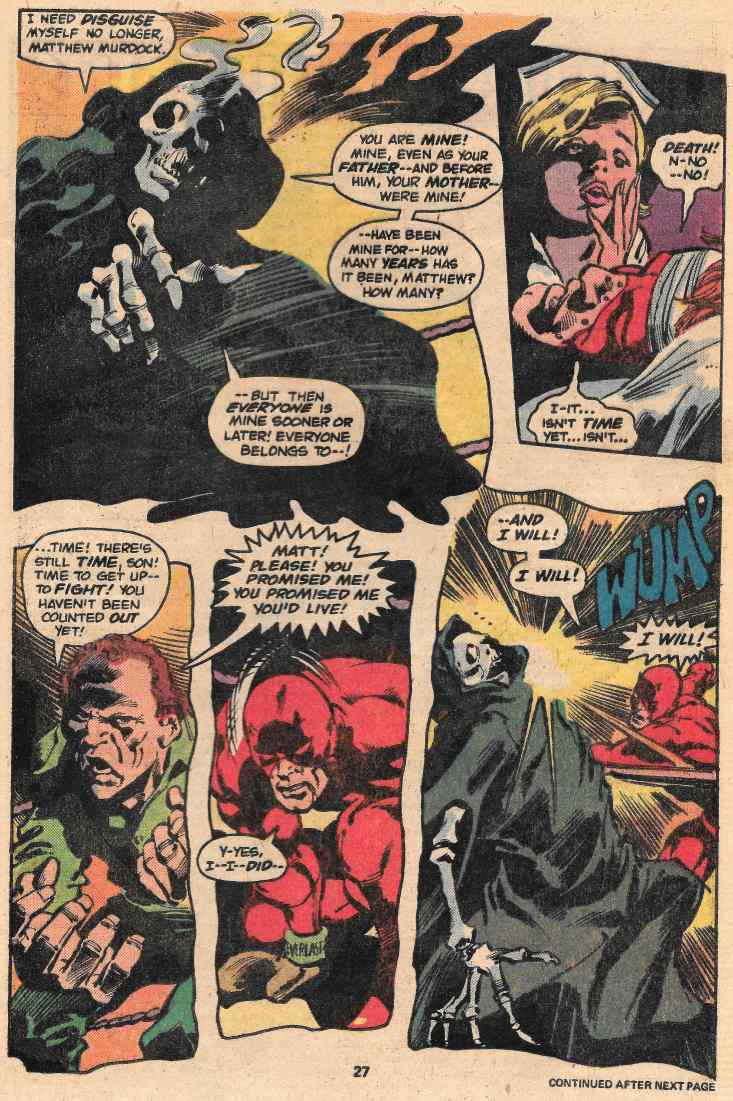 Of course, Daredevil wins. Which means in the real world that Matt comes out of his coma and regains consciousness before slipping back into a peaceful slumber. 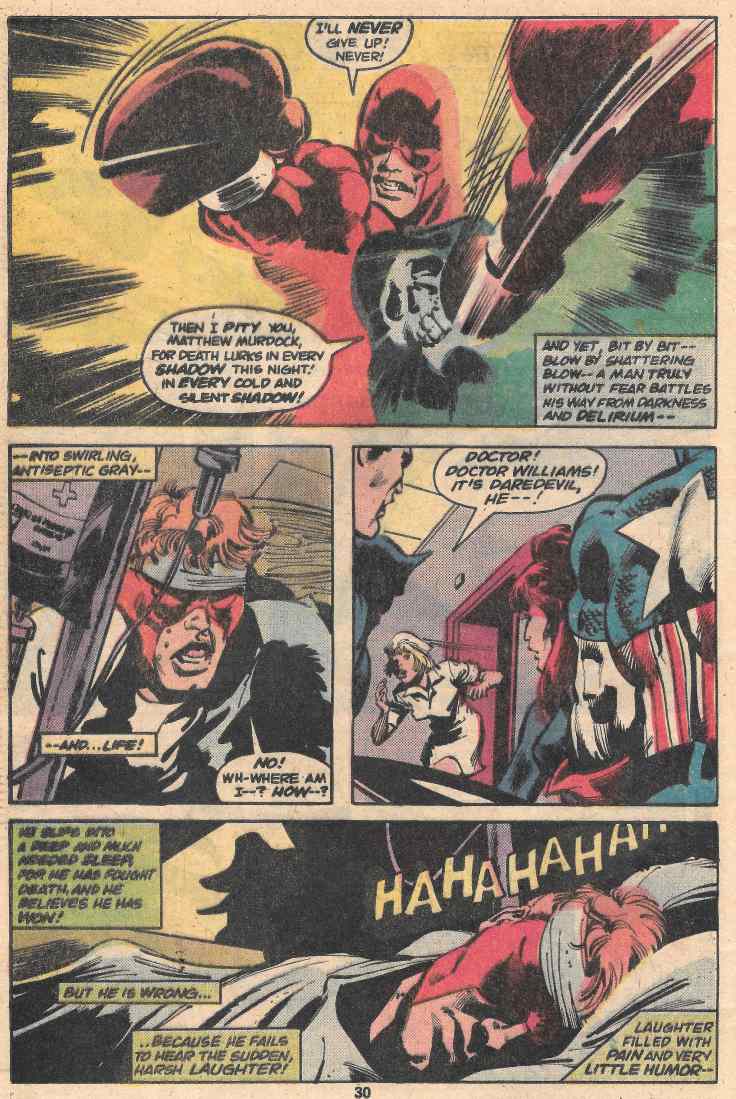 But while the startled nurse rushes off to find a doctor, another sinister figure lurks beside Daredevil’s hospital bed… 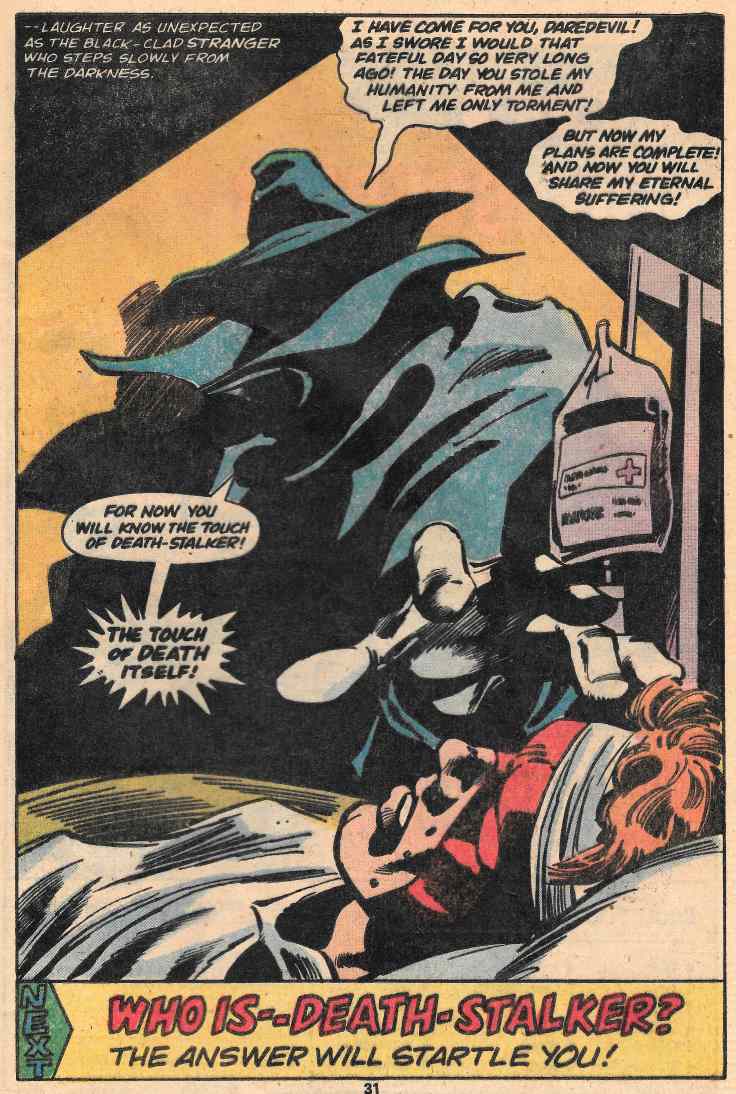 …and with the introduction of Death-Stalker, we make our exit a little early with only seventeen pages as our story count. However, those pages are pretty amazing, so we’ll call it good.

Be here tomorrow as we continue watching people punching each other, all of them superheroes!
Posted by SonOfCthulhu at 2:39 AM