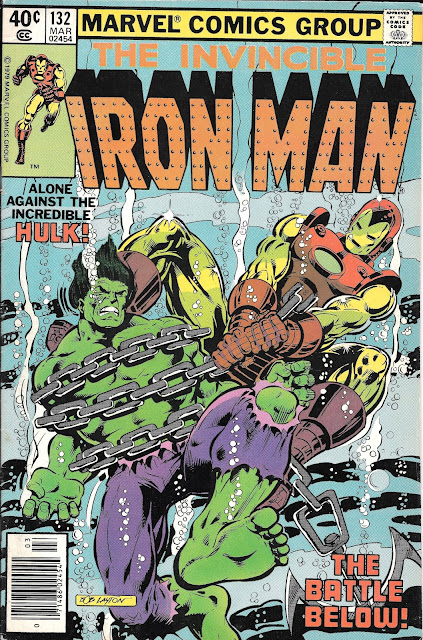 Who needs a Hulkbuster suit? Not ‘80s Iron Man

Our second outing for It’s Not Easy Being Green week finds us with one of the more uneven pairs when it comes to matches.

Don’t get me wrong in this, I’m an Iron Man FAN. Was so before the movies. But Tony Stark is human. He’s got a great tool in the Iron Man suit and the bravest of hearts when it comes to using it to fight the forces of evil and injustice. But still just a human.

Doc Banner’s lime hued alter-ego on the other hand is a creature of pure rage that gets stronger the more you hit him. Hulk isn’t a man, he’s a embodiment of rage and anger. Both of those emotions boil down to pure destructive force, and that’s in regular people. Pour them into a body that amplifies their potential to demolish consistent with the strength of each feeling and you’re no longer looking at a man, but at a force of nature.

No man can stand against that type of monster. A god? Perhaps. A monster of like creation? Maybe. But a man? Not possible.

Yet here, decades before Iron Man would develop a Hulkbuster suit we find just such a conflict. And it all begins now…

We start with a very odd scene. Namely Banner strapped to a high-tech restraint system while screaming out to the assembled room of Tony, Scott Lang (Ant man) and as yet to be identified scientist all the normal Hulk-isms. You know “Hulk Smash! Puny Humans! Hulk is strongest one there is!” excreta, excreta. There’s only one thing different. 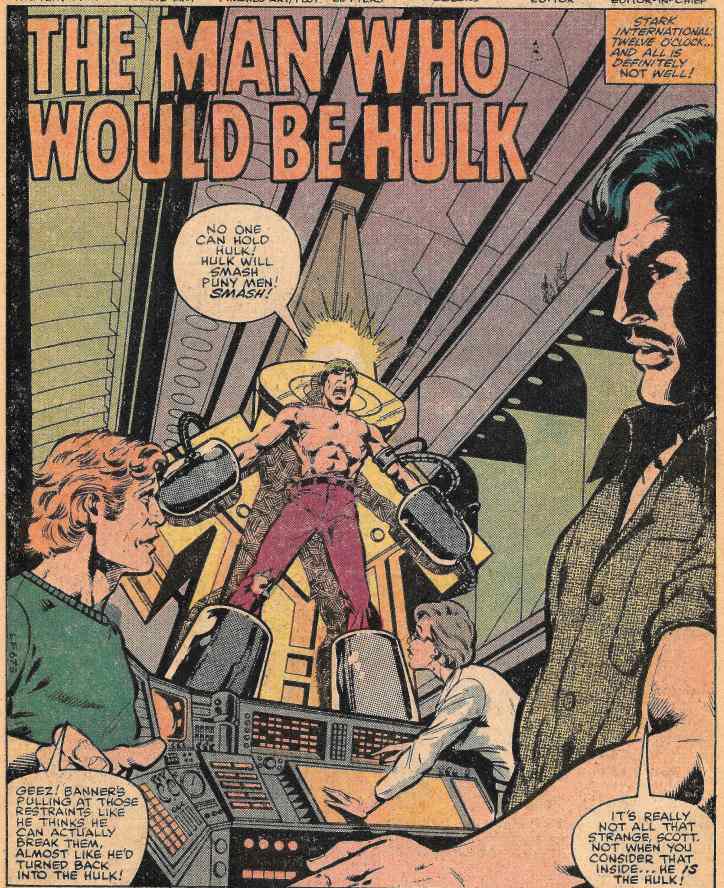 What appears to have happened last issue is Tony found the Hulk and convince him to calm down, changing him back into Banner. He then brought in his friends Lang and Dr. Sondheim to put a miniaturize pulse regulator in Banner in hopes of curing him. However they only got it half right. Banner can’t turn into the Hulk, but he still is suffering from a split personality. 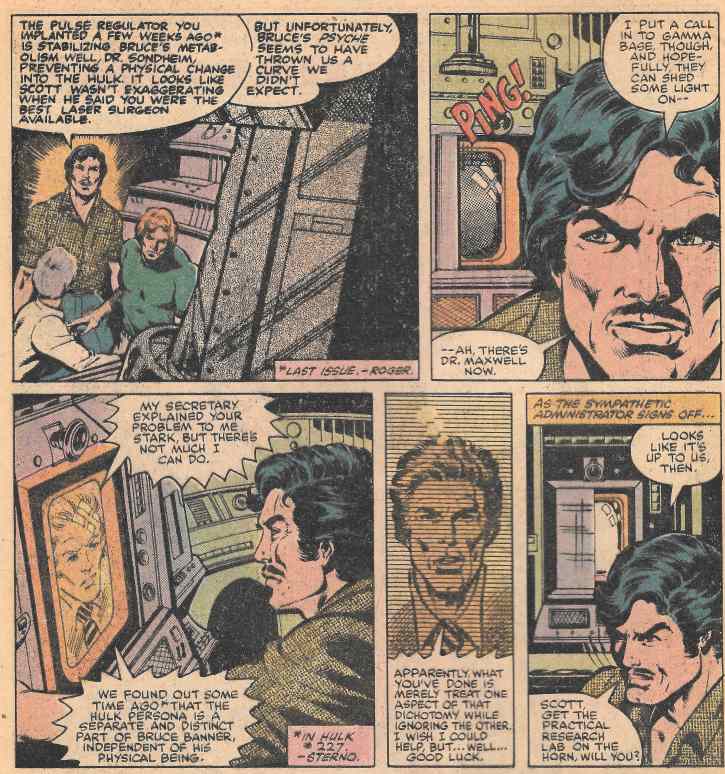 The three find a way to calm Banner using soundwaves, reverting him back to being his human self. However they then have to break it to the good doctor that he still isn’t cured. 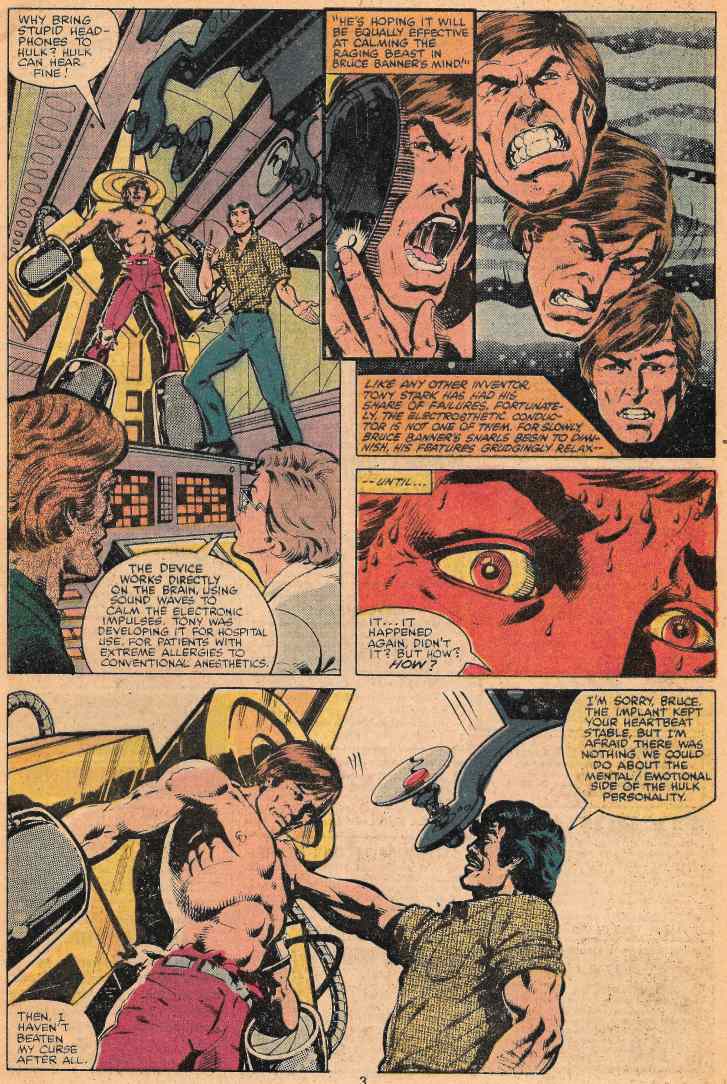 And who is not loving these 80’s Bingham pencils and clear-as-day Layton inks. Michelinie has the characters well in hand, too. This book is a reminder of all the things I miss about this era of Iron Man.

But enough of me crowing about how good this is, back to the story in progress. It appears Dr. Sondheim has some disturbing news for Tony, who has just left Banner tied up on the techo-cross. 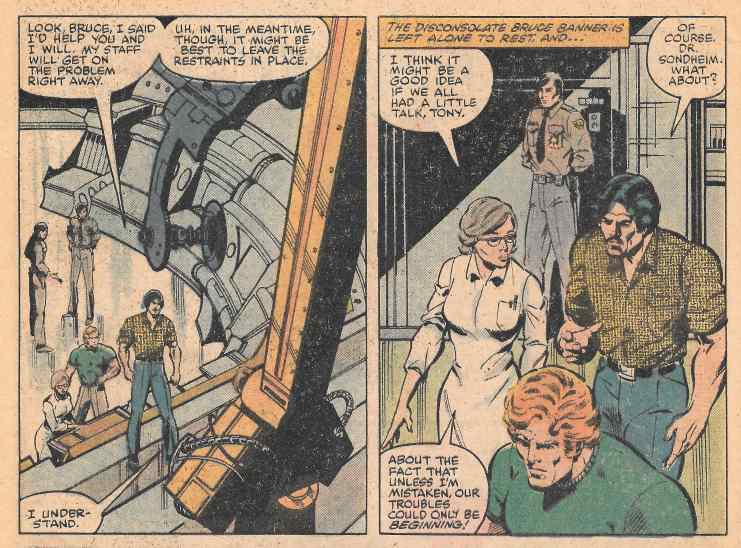 What Sondheim tells him is that Banner’s heart rate isn’t as tightly controlled as they thought. The regulator appears to be slowly failing and there are physiological changes in Banner’s body as well. While Tony uses a massive wall of computers to double-check the good doctor’s findings,  the security detail assigned to watch over Bruce hear a disturbing sound coming from his holding room.

Sure enough, they find Banner looking a little green around the gills…and everywhere else for that matter. In no time at all he is frakooming himself free of the restraints. 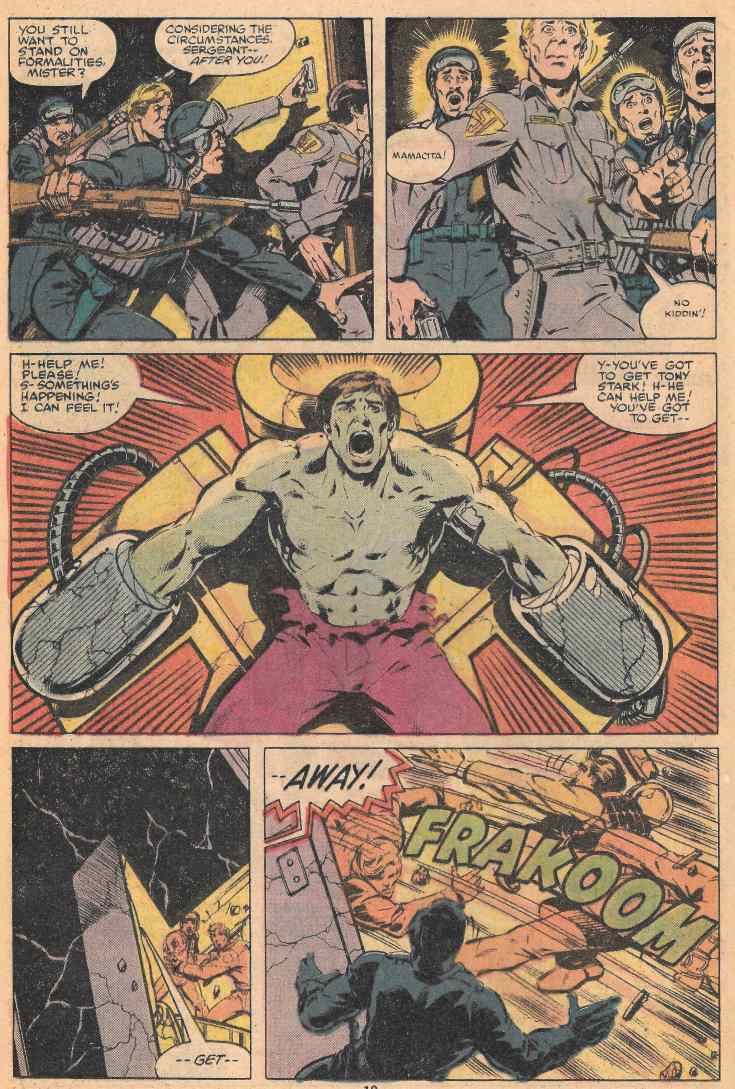 Just as this is happening, Stark and the others figure out that the implant is failing because of the effects of the gamma radiation in Banner’s system interacting with the implant’s power core. An alarm sounds and Tony has to think fast… 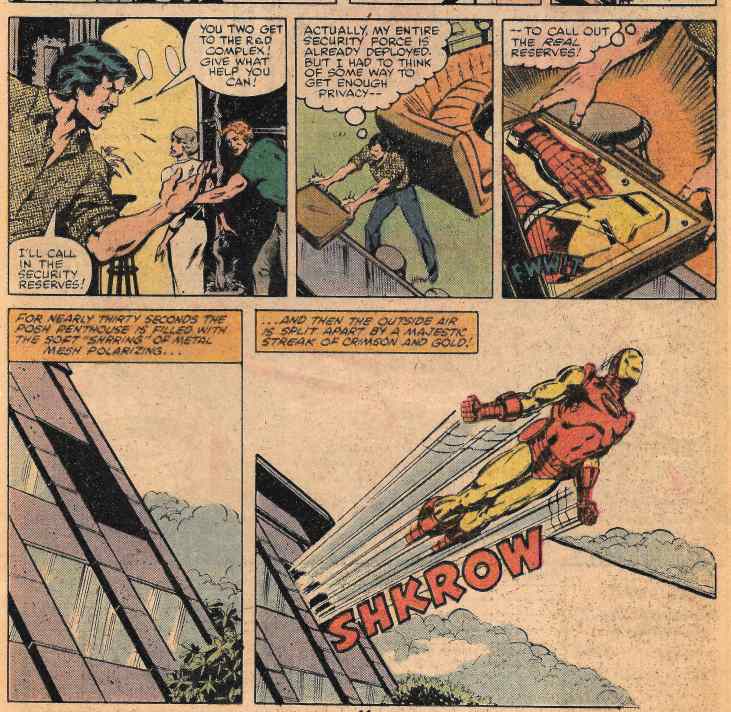 … to get them out of the room so he can don some armor and enter the fray.

And a wild and wooly fray it is. His first action upon arriving at the scene is to play centerfielder to a couple of security guards that the Hulk has knocked into the middle distance… 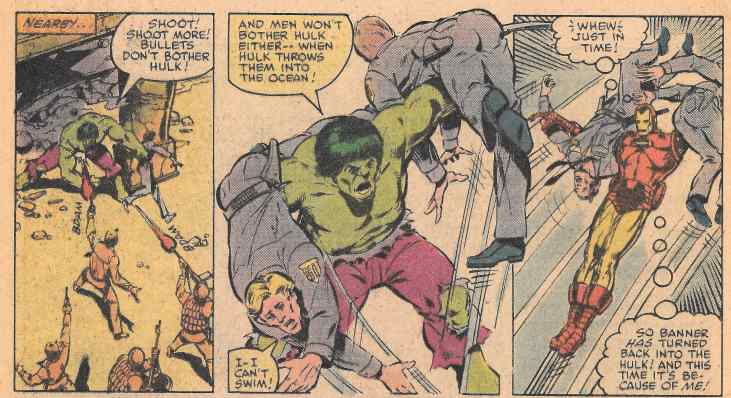 ..and then tried to reason with an upset Hulk, which earns him a one-way ride into a vehicle the auto shop is going to have fun trying to repair. So much for diplomacy, indeed! 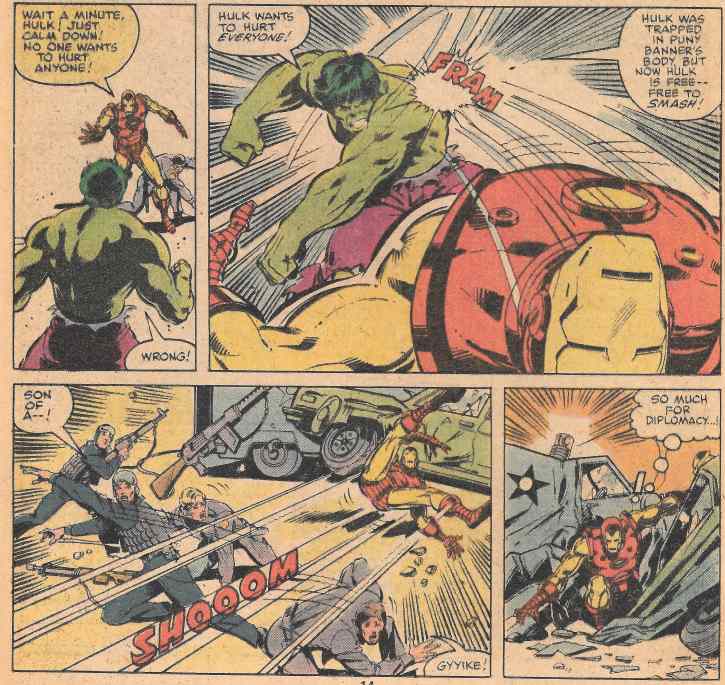 Have I mentioned before that this is my favorite Iron Man suit? No? This is the classic red-and-golds, the suit beloved by my generation as the coolest of the cool. Note it is the sans-nose version, a very important distinction. It’s a great suit and I love the Unibeam and those above-the-nipple power ports. The disc mounted battery packs slung by each hip, like some kind of western gunslinger add style. There is something so distinctive about the boots and gauntlets too. Best IM armor, hands down.

But sadly, there is no way this suit should work going toe-to-toe with the Hulk. Unless the chip in Banner is keeping him from accessing his full strength, this should be a very short comic book. That is, unless shellhead starts using his head.

He’s first got to get the Hulk alone and away from all these bystanders, some of whom seem to think Banner has a chance of changing back (he did last issue on his own when a child handed him a toy). After disabusing them of that notion, Iron Man takes to the skies and starts leading him away… 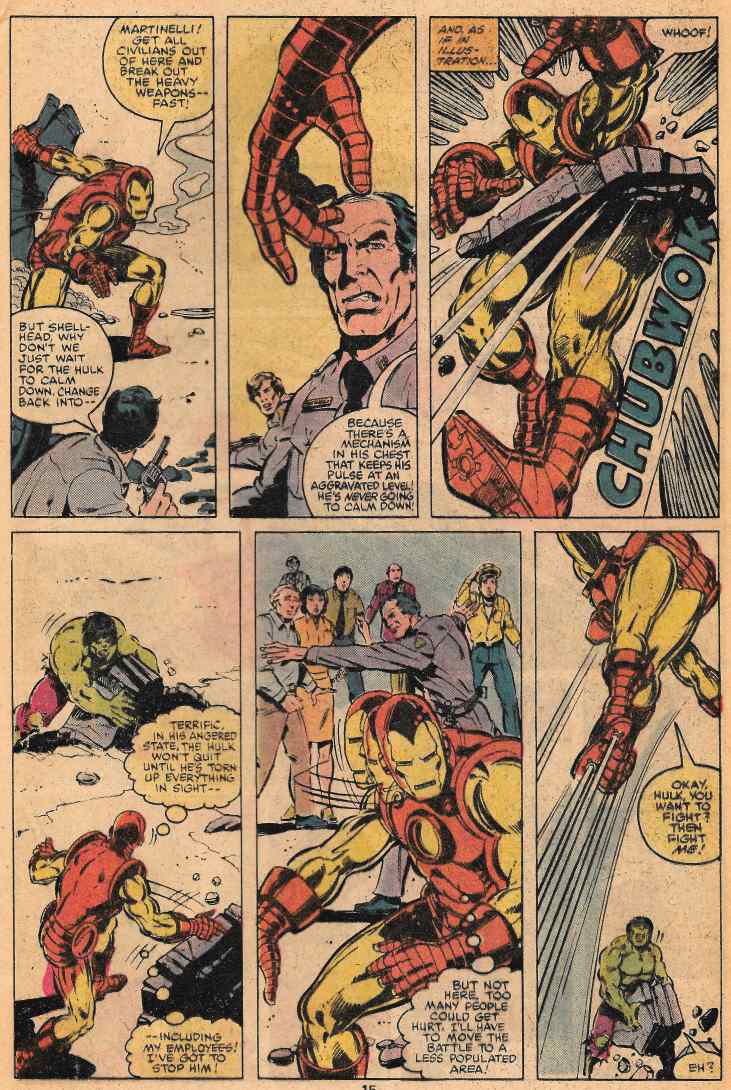 …which ends up working out well, as Banner lands on a pier that IM can turn into a dunking booth. Plooosh to you, Hulkie! 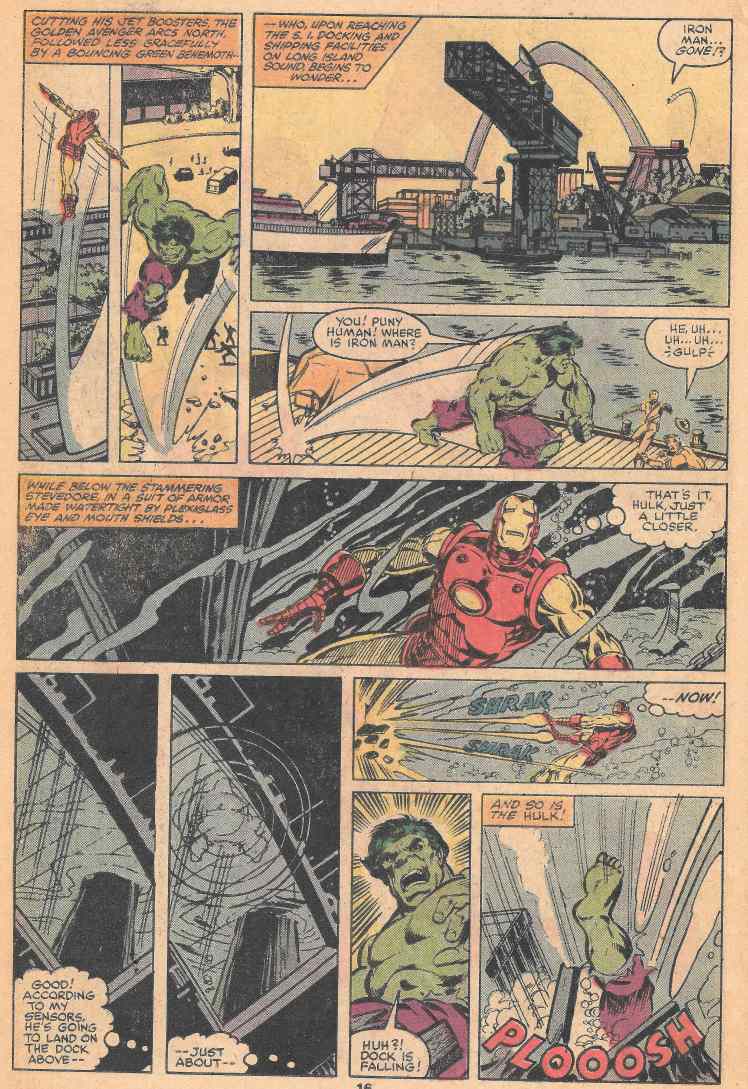 Hoping to take advantage of the situation, Stark tries to hold him under until he is knocked out. Unfortunately, the Hulk is not a water-baby and takes the golden Avenger for a toss. 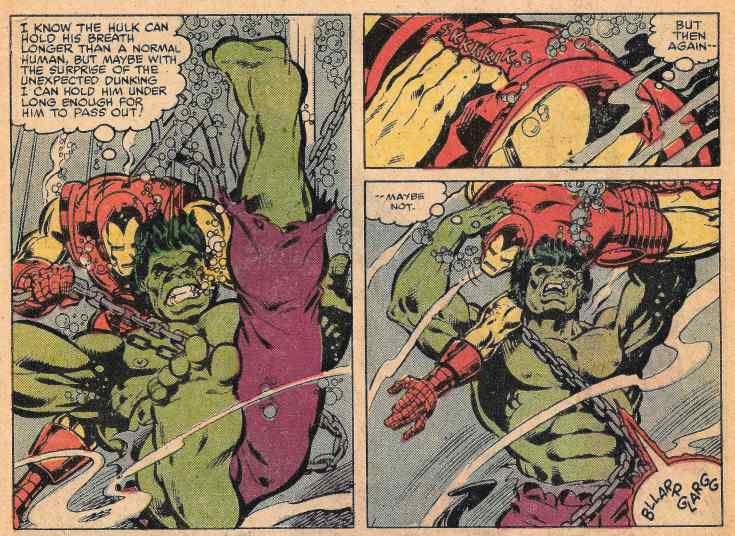 This leaves Stark wallowing in the muck both physically and emotionally, chiding himself for not stopping the behemoth and also thinking that he may have caused Banner to be the Hulk full time by trying to regulate his moods. But one of the things we love about Stark is his “never say die” attitude. Not one for giving up, Stark bursts from the water like a missile to try again. 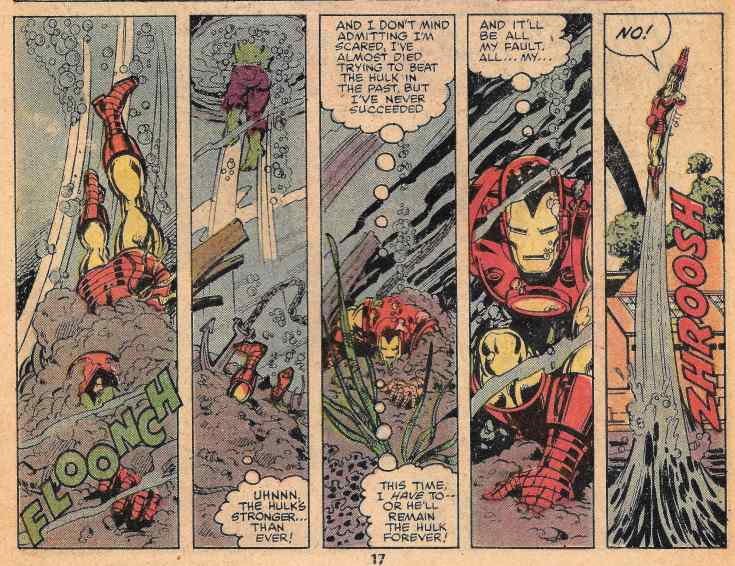 He spots Hulk ripping up his company arch near the airfield and calls upon Rhodey to evacuate everyone. Rhodes isn’t aware of the danger… 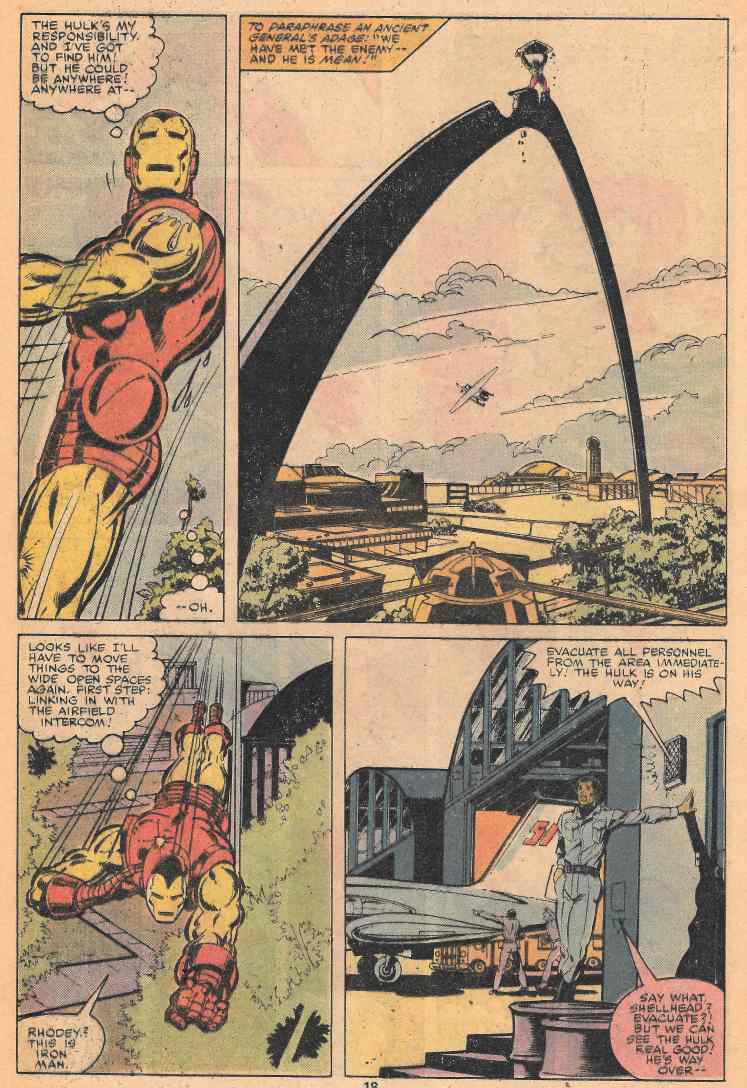 …at least not right away. As soon as Stark drops the Hulk and the arch on the airstrip, James Rhodes gets the picture. Tony still has to keep the Hulk off balance while the evacuation is in full swing and that means tossing everything he’s got at the Hulk. Including this cart for towing planes. 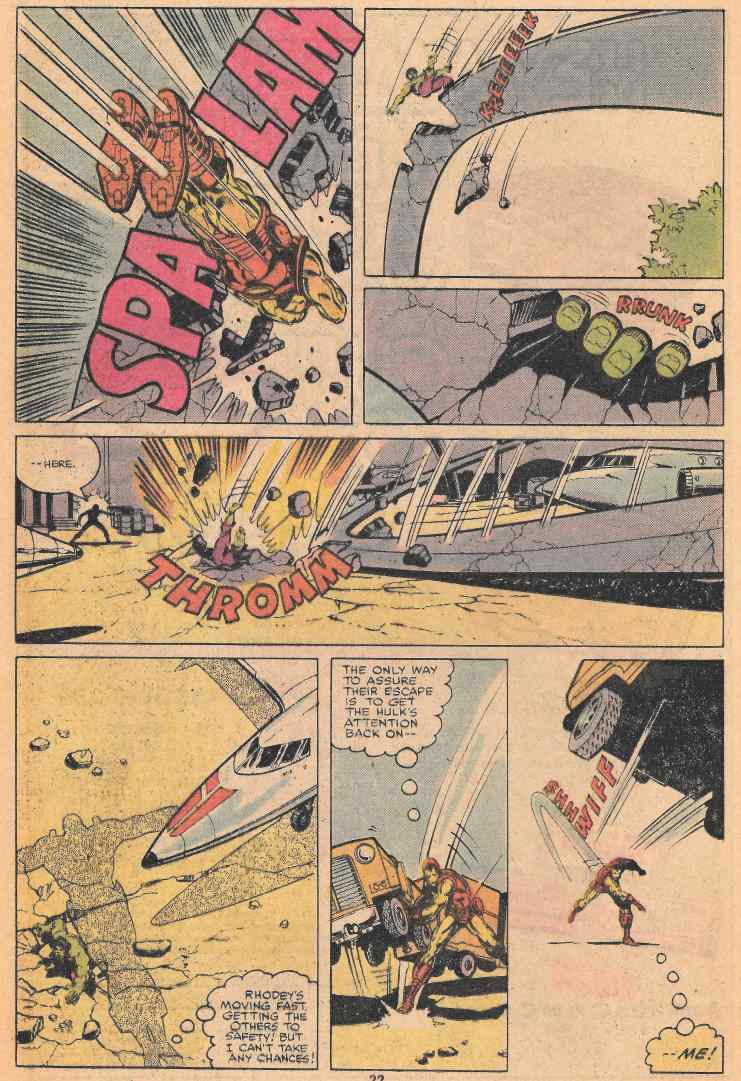 However, showing the Hulk that objects can be used as weapons doesn’t work out so well for Tony’s favorite plane. Scratch one Learjet from the corporate books. It does stagger the Hulk from the explosive blast of all the jet fuel. A dazed Hulk now faces Tony, but can Iron Man put the finishing touch on this fight? 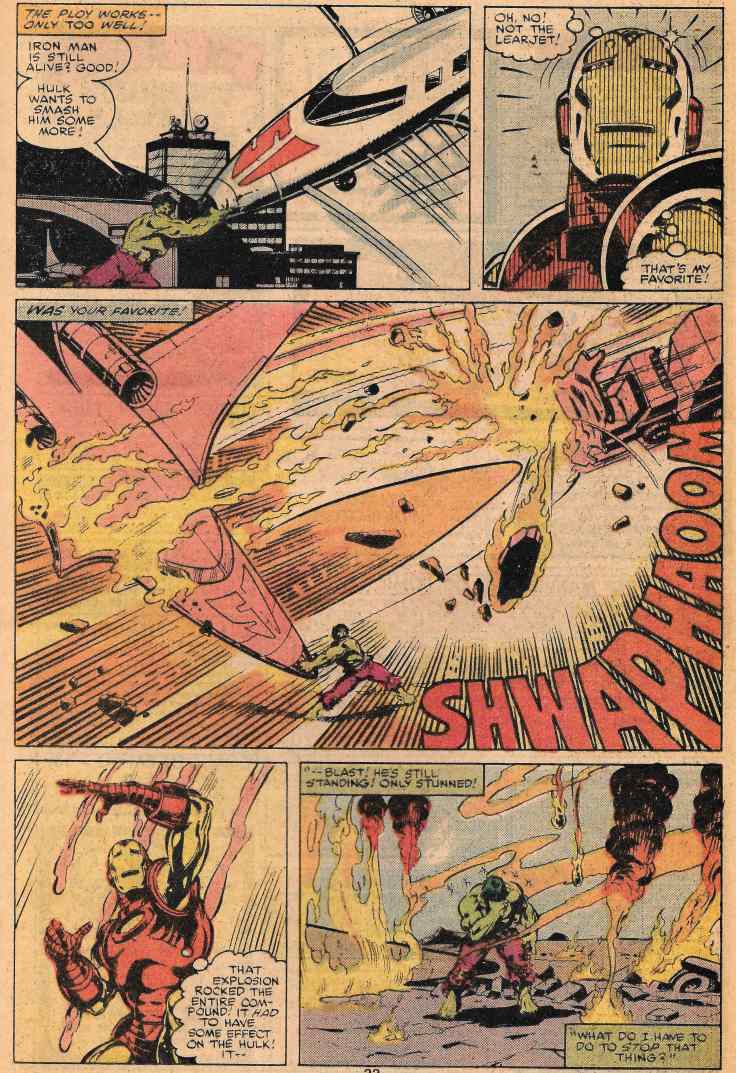 Tony puts all his power into one strike in hopes of ending the fight. It’s a desperate measure and one that will take a toll on Stark that he can’t imagine. All he knows is that he must help his friend at all costs. 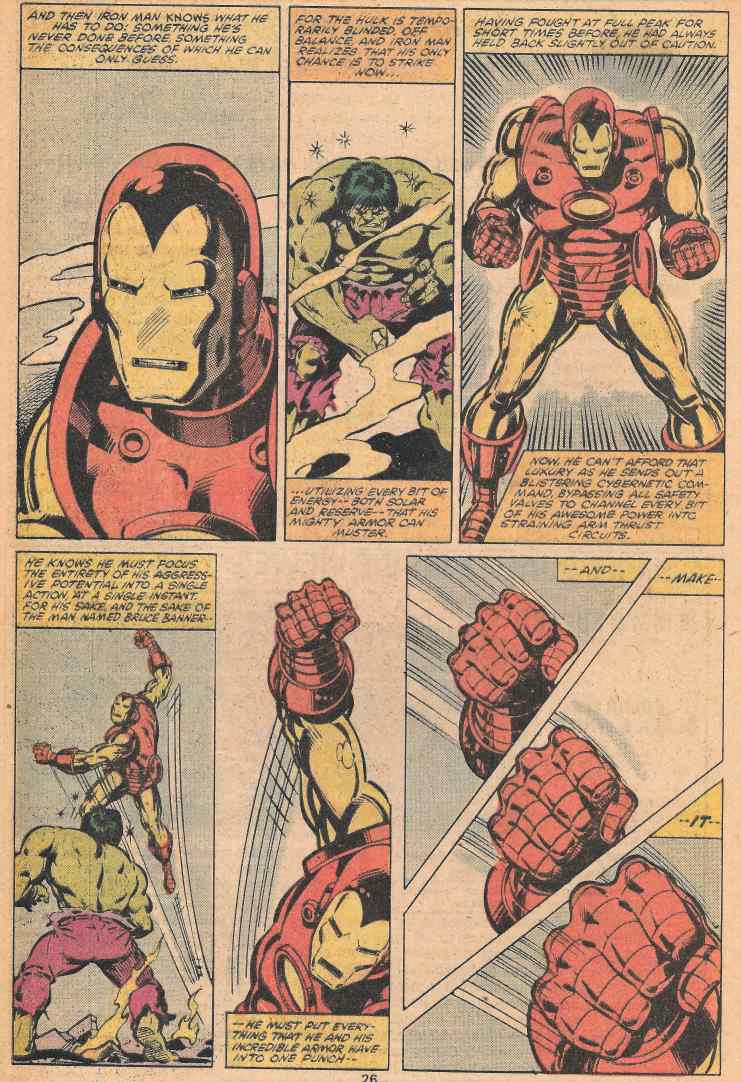 THIS is what made the 80’s so great: perfect story build-up and THEN one amazing panel that shows power and artistry. The 90’s missed the mark. The 90’s thought every page in the book should be like this one, but what they failed to realize is that all action with no rising tension is boring. Even if you love frosting, a cake that is 90% frosting will taste like crap. But the 80’s? The 80’s knew exactly the right recipe. Pretty damn scrumptious!

And what do we end with? The Hulk buried several feet into the ground… 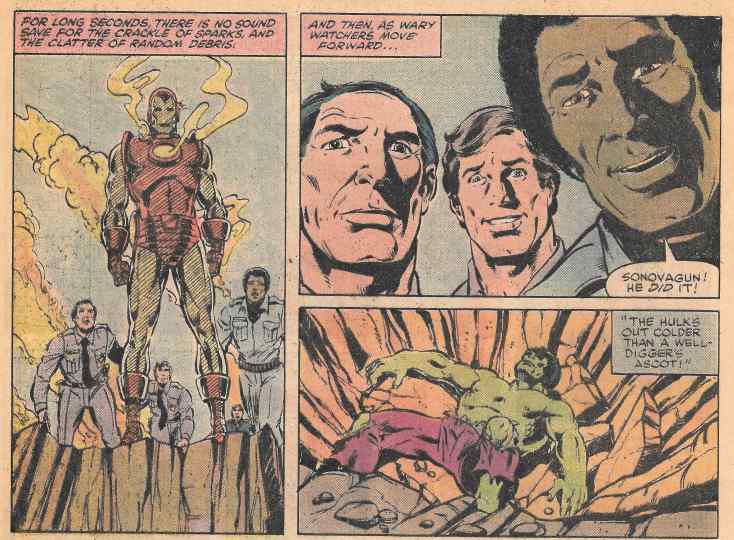 …but the battle has cost Iron Man something too… 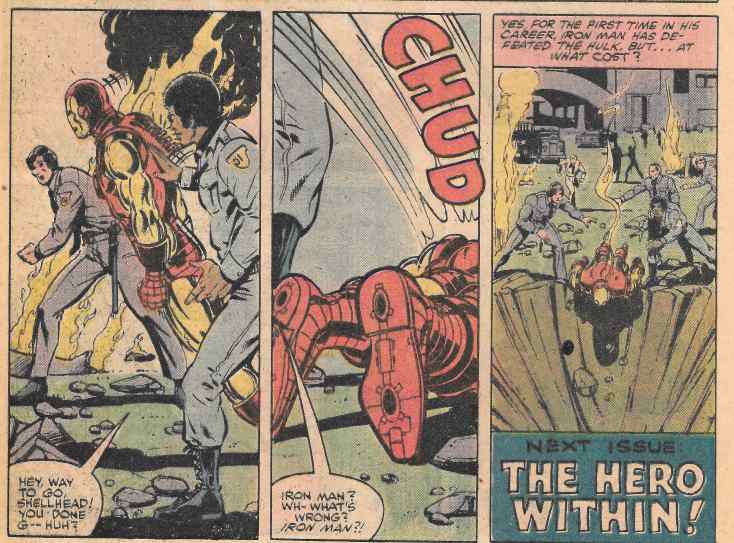 Incredible! I love this story and everything about it and SO, SO happy that a copy resides in my hot little hands. Everything about the art is perfect, the story is the right mixture of action and emotion. Maybe it’s just because I’m a child of the Bronze Age, but THIS is the pinnacle of comic book storytelling.

Join us tomorrow for more Hulk punching heroes and we’ll see what other goodies the Crapbox might hold.
Posted by SonOfCthulhu at 7:43 PM