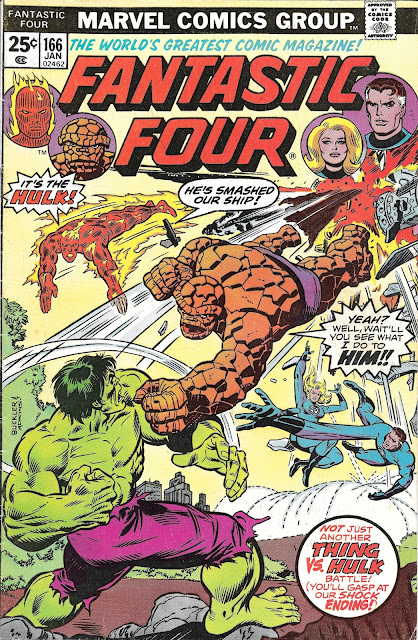 A two-part epic you won’t want to miss!

This is the only proper way to wrap up It’s Not Easy Being Green week: a look back at a fabulous two-part FF story with amazing writing from veteran hero-guy Roy Thomas and art from George Perez. I’ll even throw a bone at Vince Colletta and state the inking in this issue deserves a nod. I’m going to spend NO time with setup before jumping into things with this one.

Hang on to your hats, kiddos! This one is a doozey.

We begin with the FF on a cross-country flight via a commercial airline. Not one of the smaller jets either, but a whoppingly huge 747 complete with first class lounge. And wouldn’t you know it, that’s where our foursome is, with Ben Grimm, the ever lovin’ blue-eyed Thing getting mad at some other passengers locking lips. Appears if the lovin’ ain’t coming the Thing’s way then he’s apt to get a bit riled. 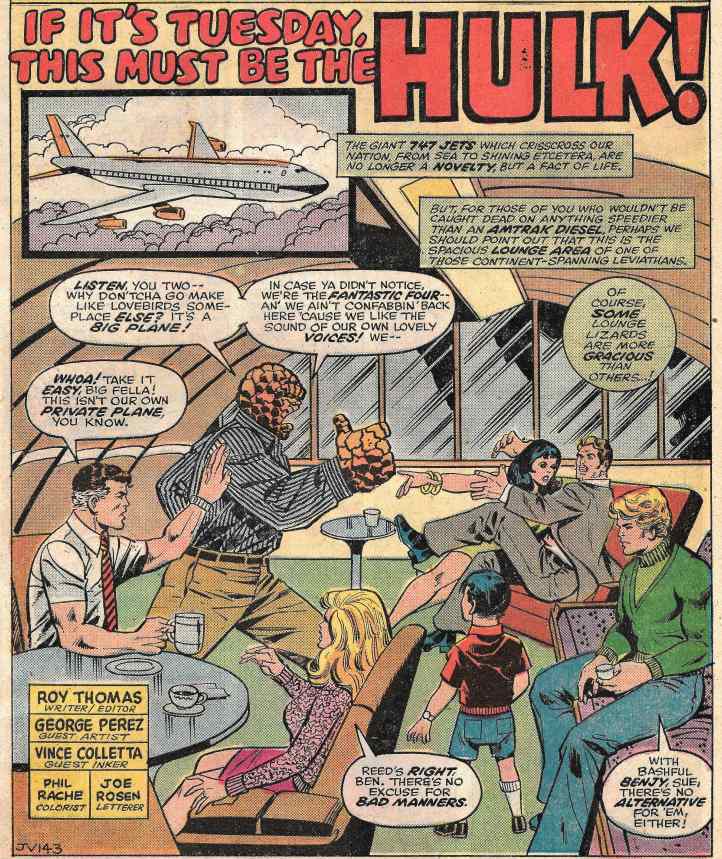 Leave it to Ben to get put in his place by this guy’s wife or girlfriend leaving unbashful Benji moping in one of the lounge’s groovy chairs.

But don’t worry, there’s always someone around who will pick up your spirits, even if HE isn’t quite the sexy dish you were looking for.

Since we can’t let the Thing hog all the screen time, we turn now to Johnny Storm, the fabulous Human Torch, who’s having issues with his date Frankie. I sure hope that’s not Frankie Raye he’s talking about. Because she’s going to turn into someone a bit freakish herself later.

While Sue is being supportive of her little brother, leave it to Reed to bring up business. Mainly the business of the Psi-Amplifier, a machine that the last time it was used switched the Thing and the Hulks minds. This time though Reed thinks he’s got it perfected to CURE the Hulk. He also lets them in on the fact that the Hulk has been seen rampaging around the area they are currently flying over. 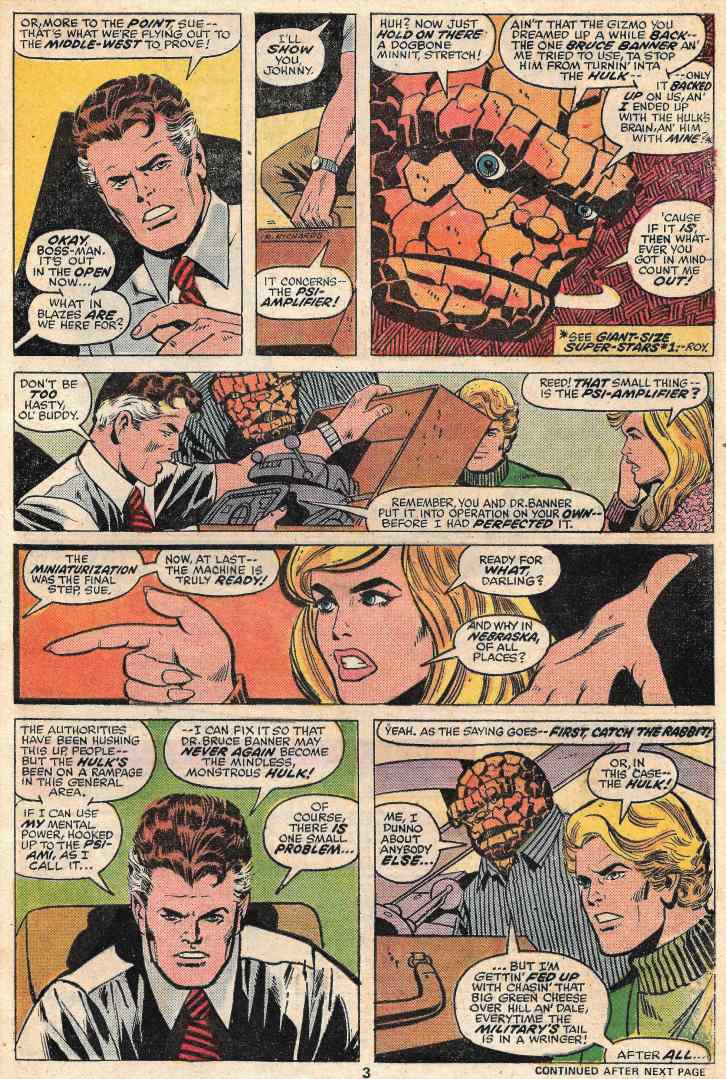 That fact is about to become OVERLY apparent. First Ben almost sounds sorry for the big, green-but-not-jolly giant. However his moment of sympathy will pass quickly as the Hulk accidentally smashes into the plane’s wing, destroying the flight’s ability to stay airborne. 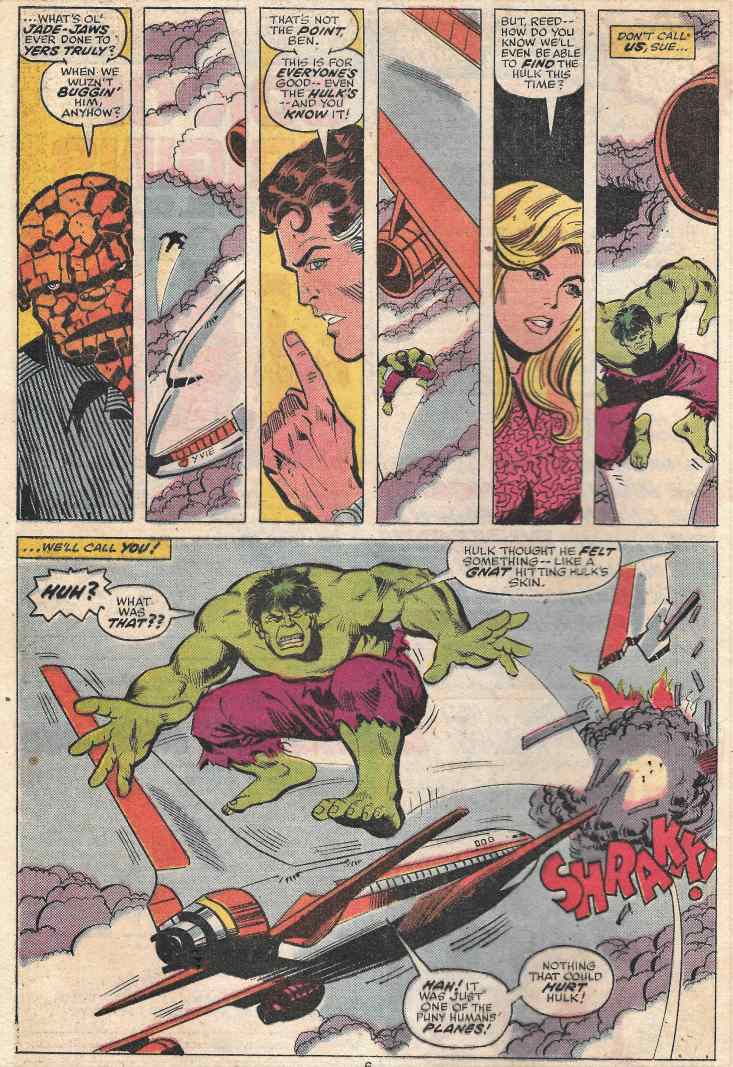 As the Hulk hurtles back Earthward, the FF spring into action…at least everyone but Ben, who’s super strength and durable exterior really doesn’t do anyone any good right now. Reed starts shouting orders and prepping Sue for her Big TEST! (emphasis his). 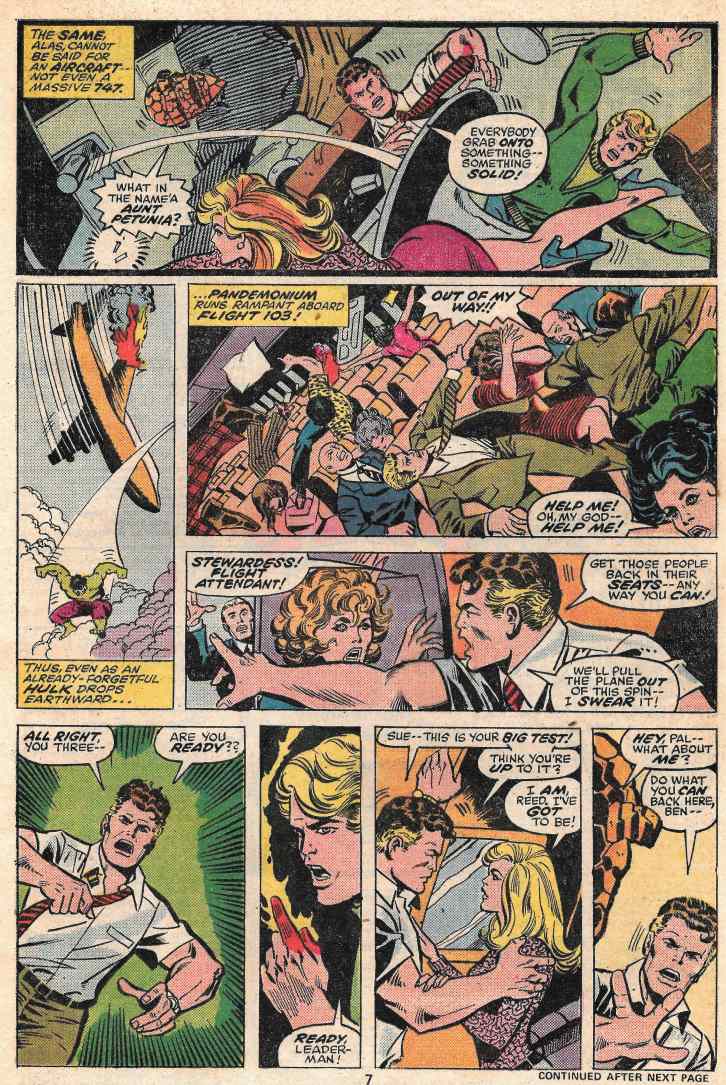 First up, Reed has Johnny pop a hole in the jet and get them both outside… 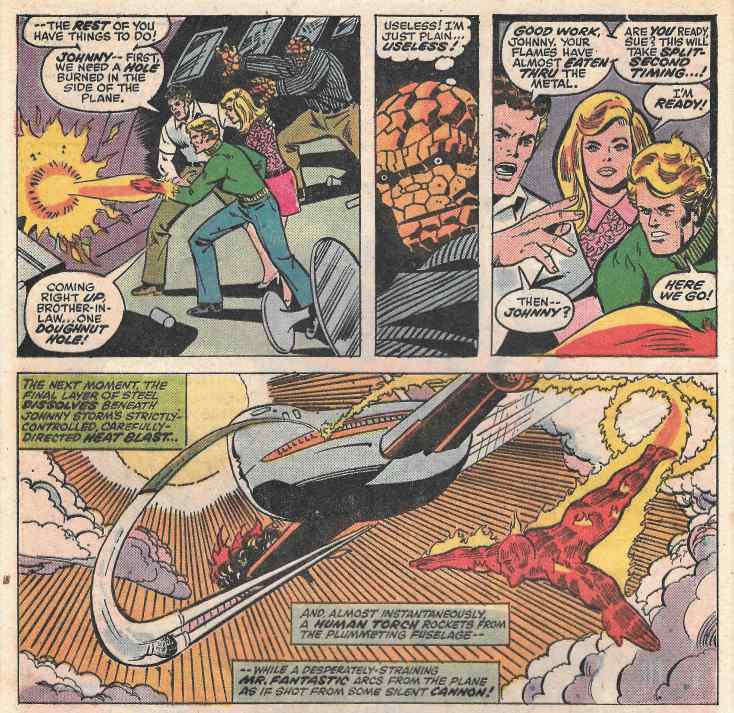 …which creates tremendous suction inside the plane that Sue has to try compensating for with her invisible force field.

Once outside, the Torch acts like both a human engine and tries to do whatever minor repairs on the wing he can. Mr. Fantastic has latched on to the tail of the jet and is acting as a safety parachute. But even if by some miracle they save the plane from smashing into the ground, the one road that might work as a makeshift landing strip has a car on it. Someone is going to end up smooshed unless… 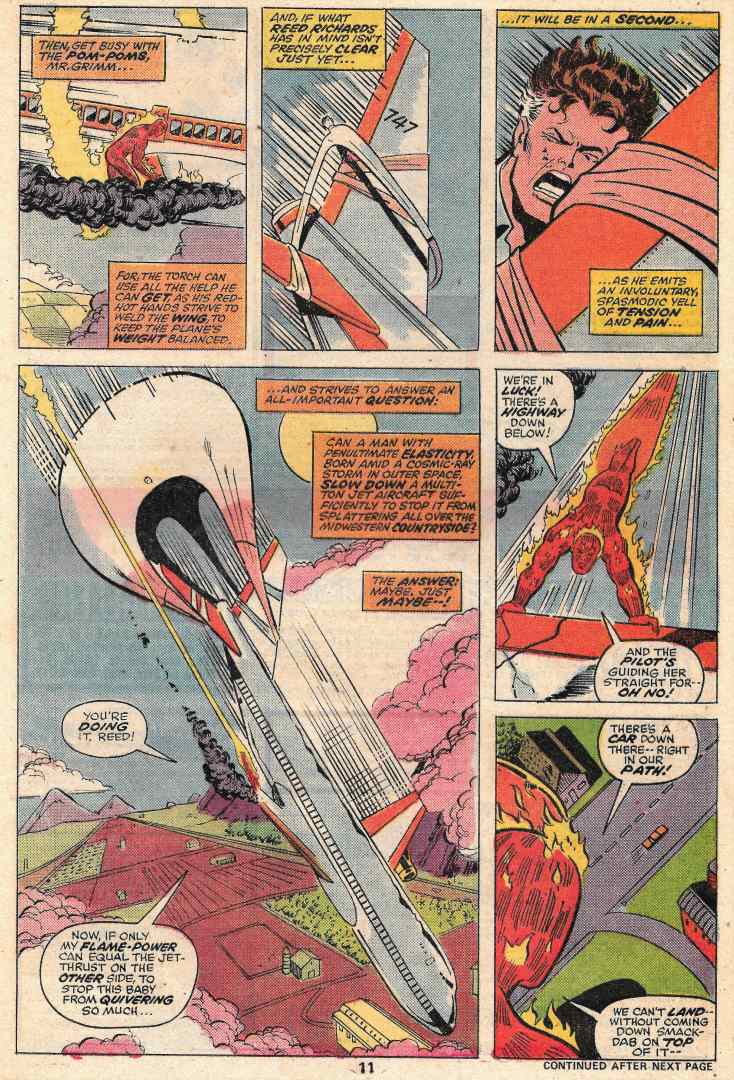 …the Torch can use his flame powers to warn the car off the road, which he hurriedly does. Still, the landing will be more than just a little tricky… 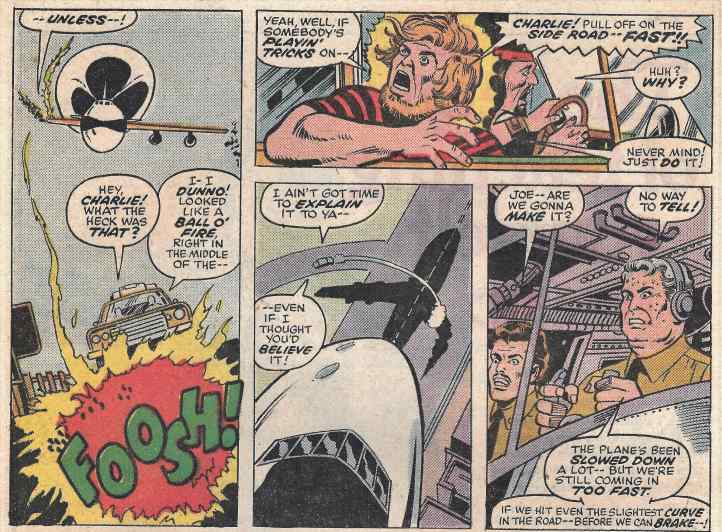 …but thanks to the efforts of three of the Fantastic Four, completely successful. 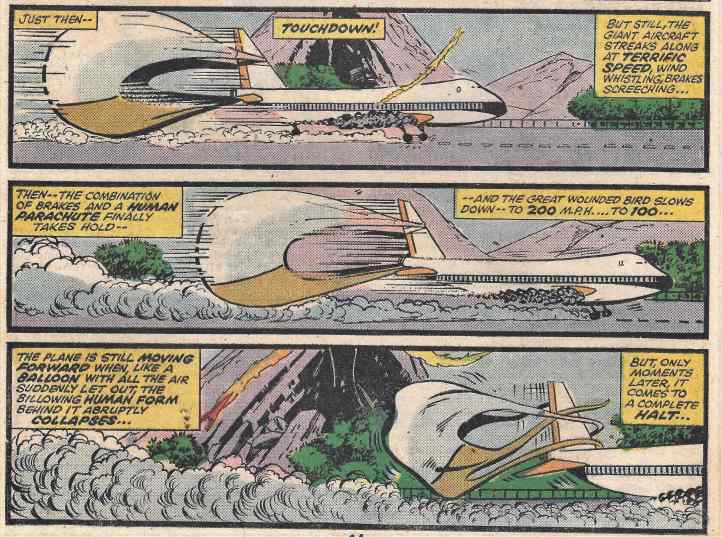 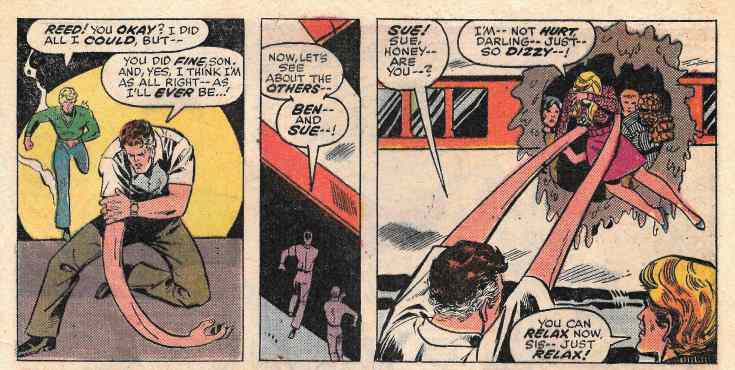 ..Ben looks on pitifully. Just then a military helicopter arrives to spirit the foursome away at the request of “the big brass” and it doesn’t sound like they will take no for an answer. 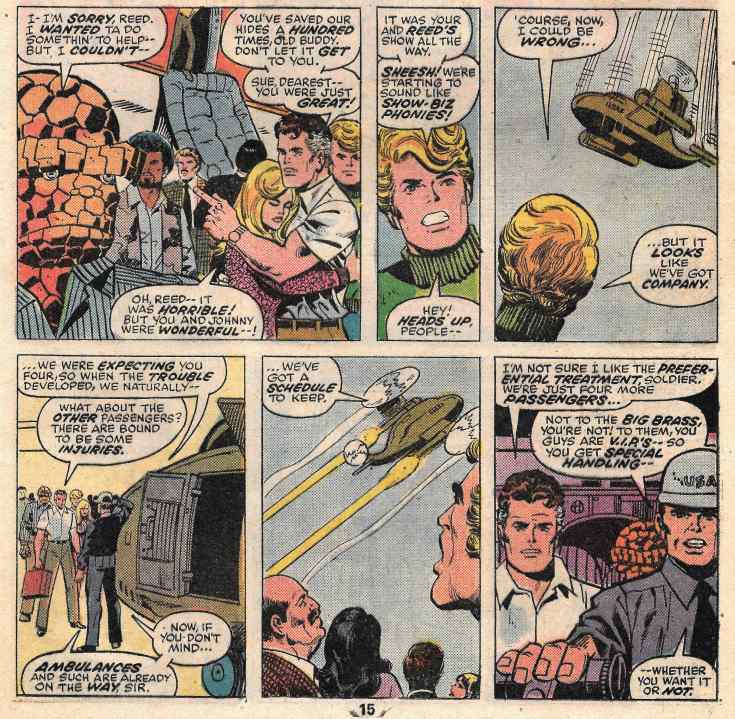 And that not taking no for an answer big brass happens to be this stuffed shirt named Colonel Sellers. Sellers isn’t much more than a stand in for the usual stuffed shirt General Thunderbolt Ross, and his mission is exactly the same: stop the Hulk at all costs. Reed, of course, thinks the Colonel will keep his word that Dr. Banner will go free if they can change the Hulk back. We the audience know that ain’t never gonna happen. 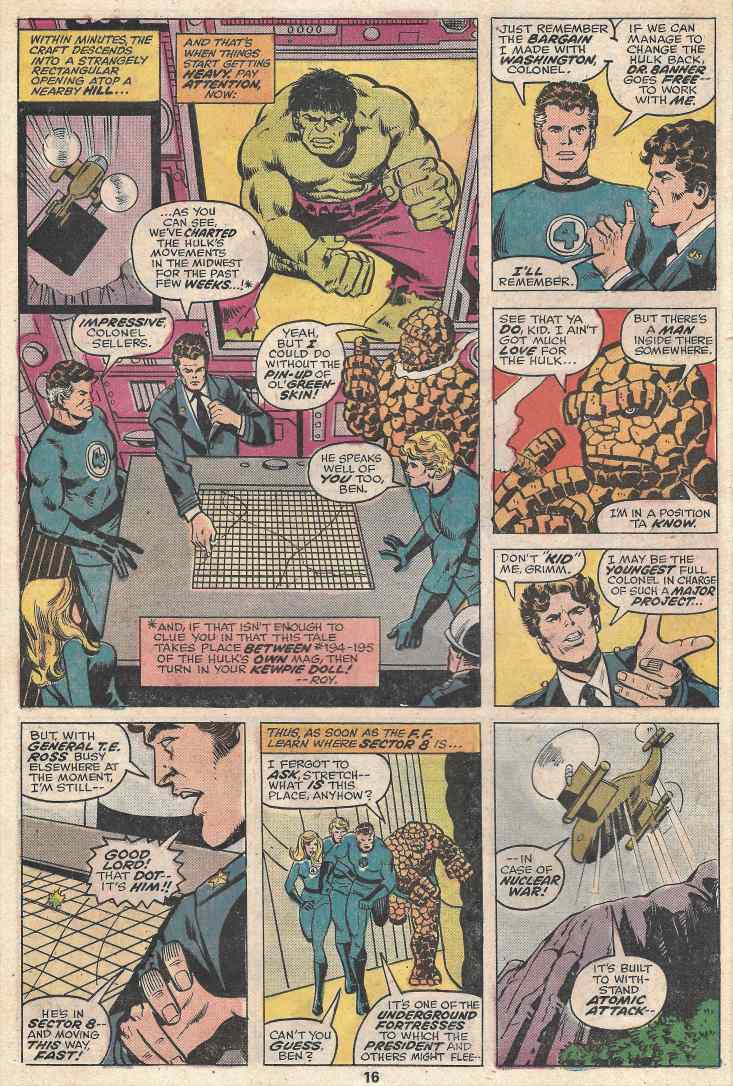 But the ruse of saying so gets the FF on the government’s side, at least temporarily and off they go to capture the Hulk.

Upon seeing the very weird-looking helicopter pass over, the Hulk notes the army markings on it and takes a pot shot at it via thrown tree. 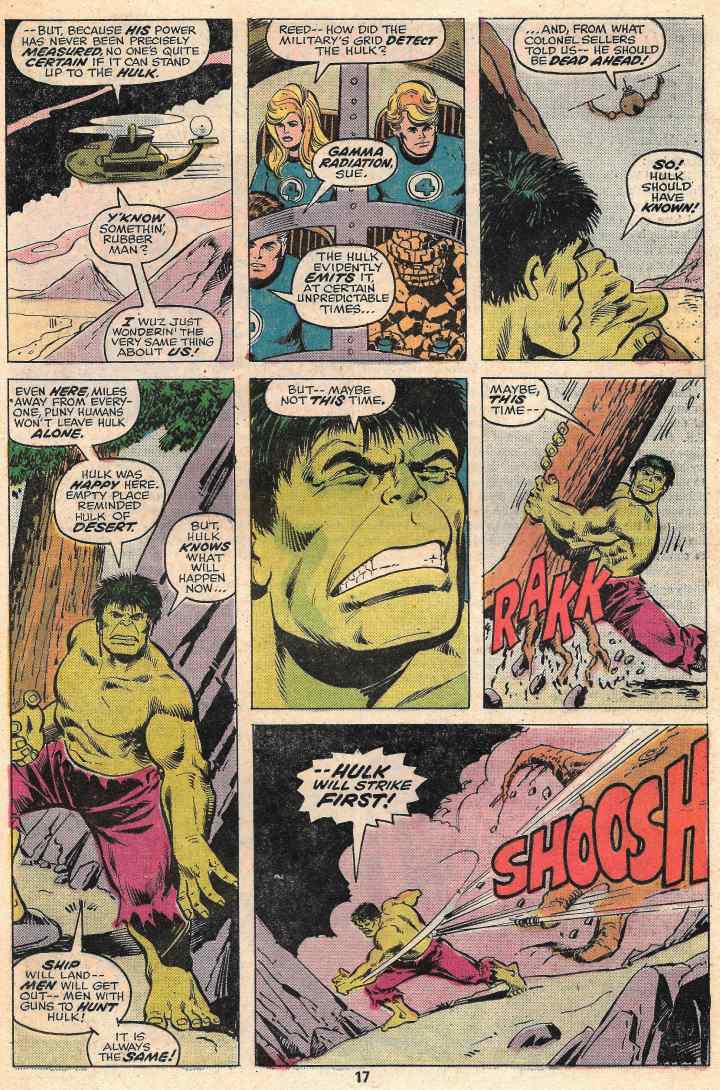 I’m just saying that it isn’t the day for the FF to be flying in ANY aircraft. Not with the Hulk around, at least.

And while Reed, Sue, and Ben take the long way down to the ground, Johnny takes the fight to the Hulk, using both skill and new tactics to score a first hit on ole purple pants. 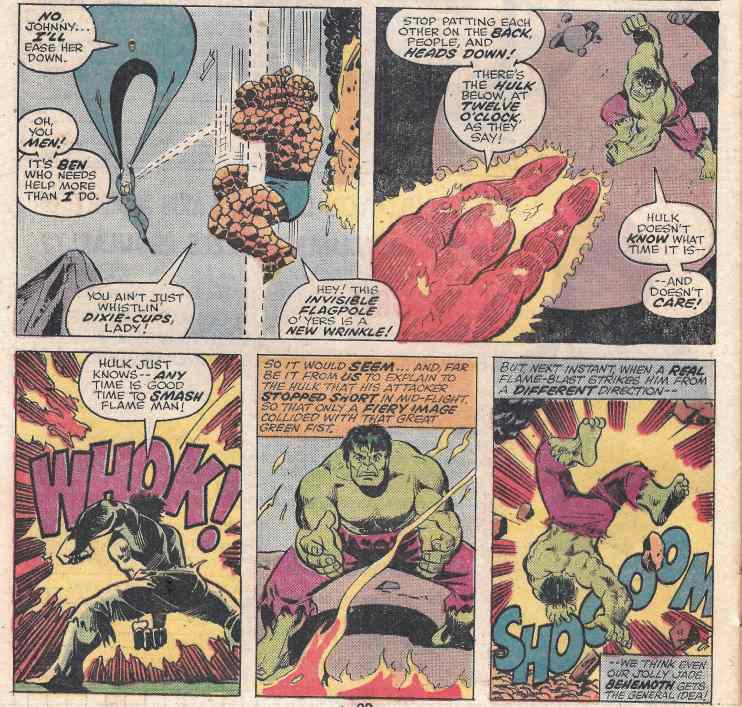 While the man-monster is disoriented, Reed tangles him up like the worst kind of office rubber band and the Invisible Woman cuts off his air supple via invisible bubble. 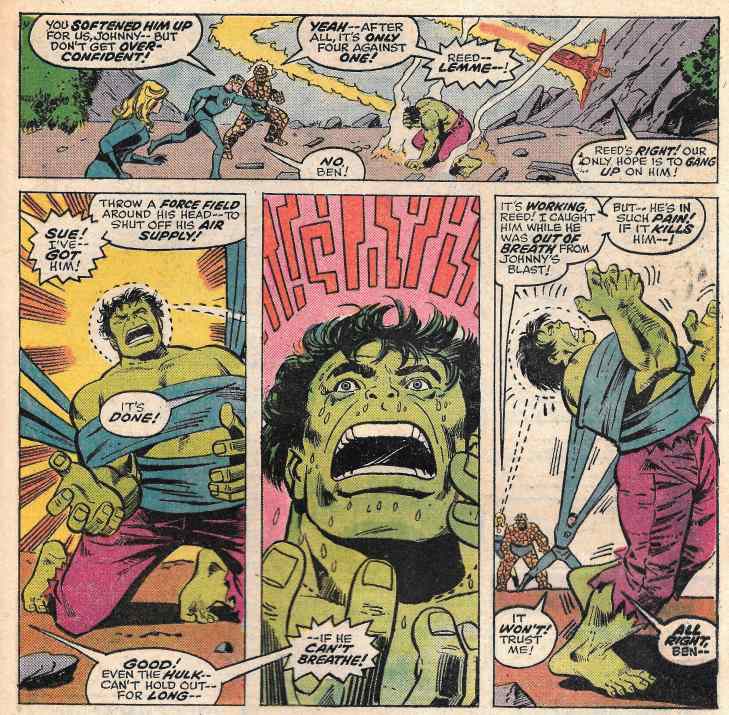 Now it’s Ben’s turn and for once he seems reluctant to take a poke at jade jaws. Didn’t this guy almost cause the deaths of an entire plane full of commuters just a few pages ago? For gosh sake’s, Thing! Poke the guy while you got the shot at him! 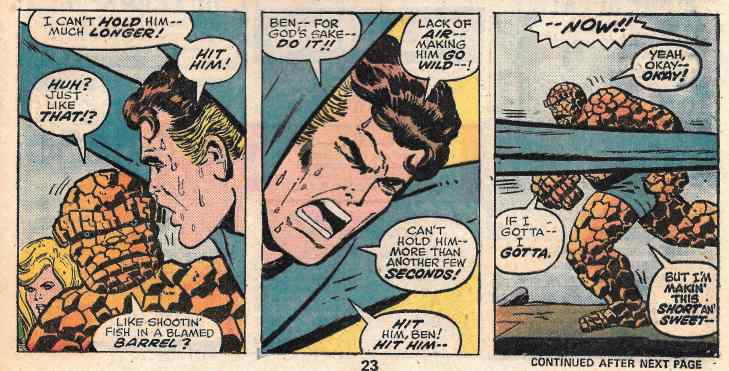 And unlike most of their fights, one punch cleans his clock due to lack of oxygen. Also unlike most fights, Ben seems to be upset that they took down his adversary so easily. 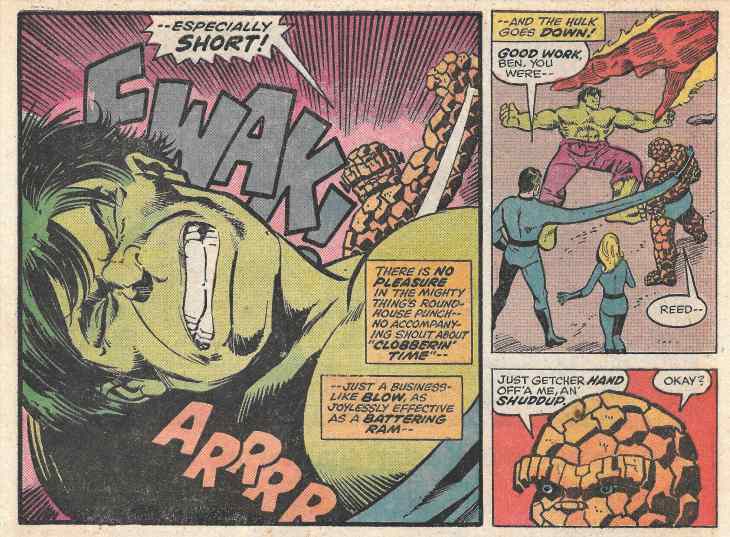 In no time at all (like LITERALLY the next panel), the Hulk is bound into Reeds Psi-Amplifier and big brain is ready to try turning him back into Dr. Banner. 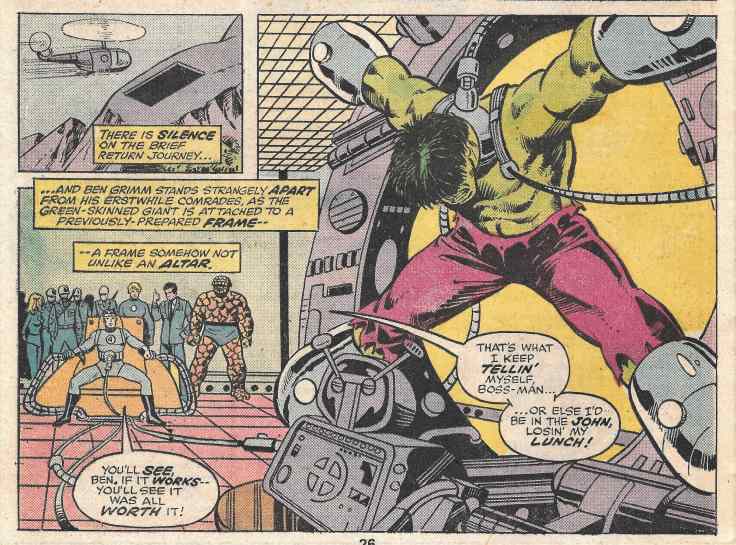 After Ben voices his misgivings over the entire affair, the machine is turned on, causing Reed to have face sweats of a man experiencing bowel discomfort. The result of all that straining is… 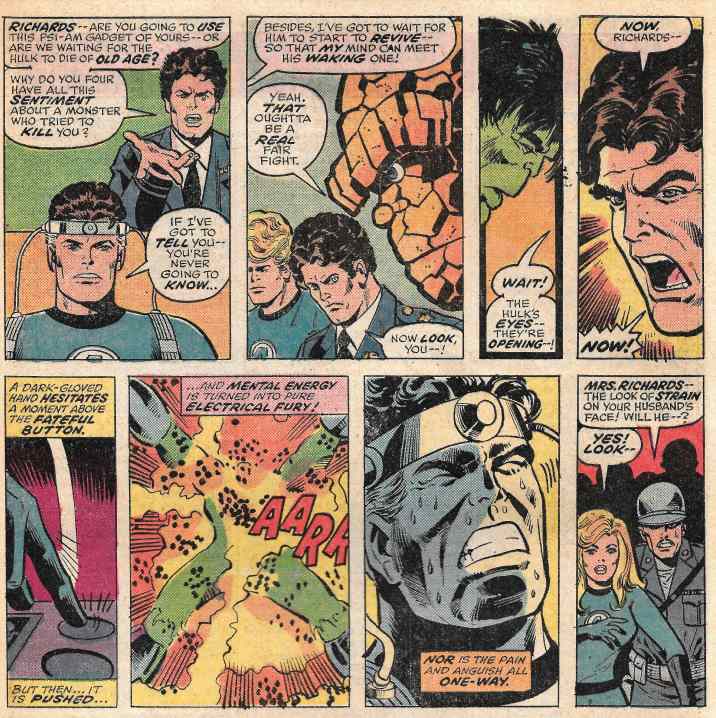 The Hulk transforms back into BRUCE! 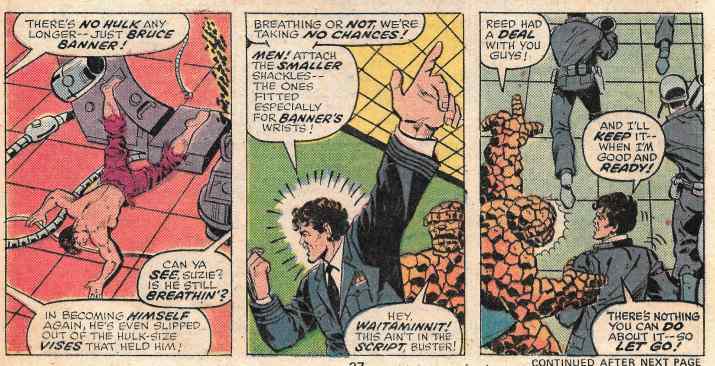 Which means he gets to go free…except it TOTALLY DOESN’T, because Colonel Sellers has plans to take him into custody indefinitely, something that doesn’t sit well with the Thing. Also Sellers seems to think that he is in complete control of this situation. 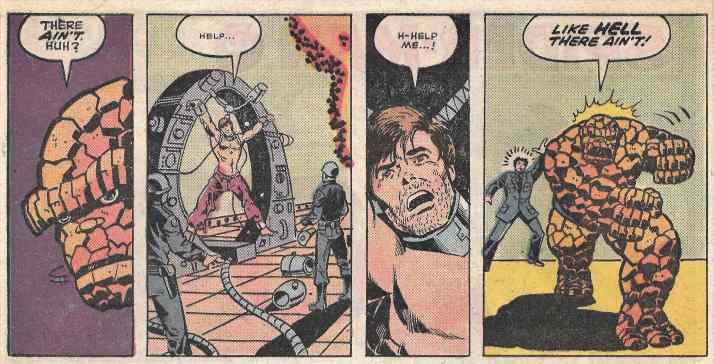 Buddy, Ben Grimm is about to prove you ain’t in control of Jack Shit.

First by freeing Banner and causing the reappearance of the Hulk… 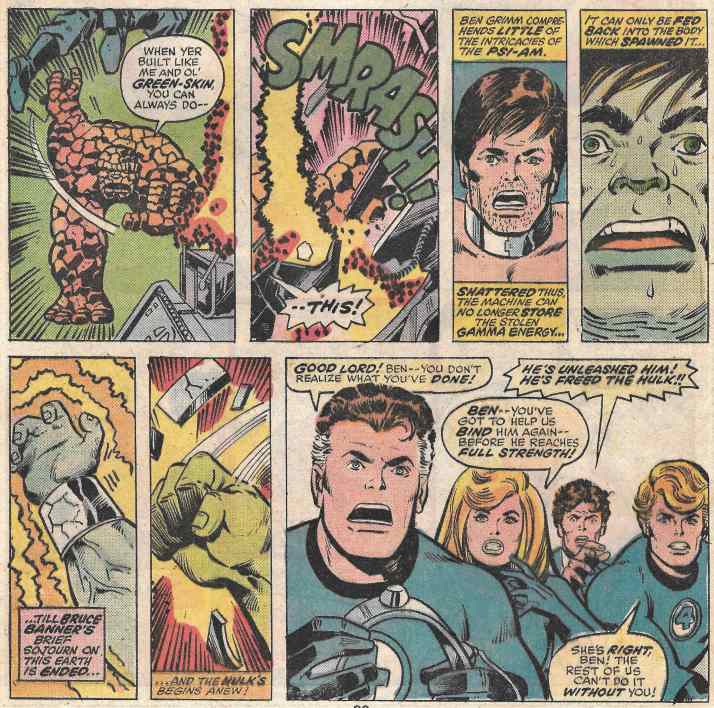 …and then by teaming-up with him against the army and his now former teammates. 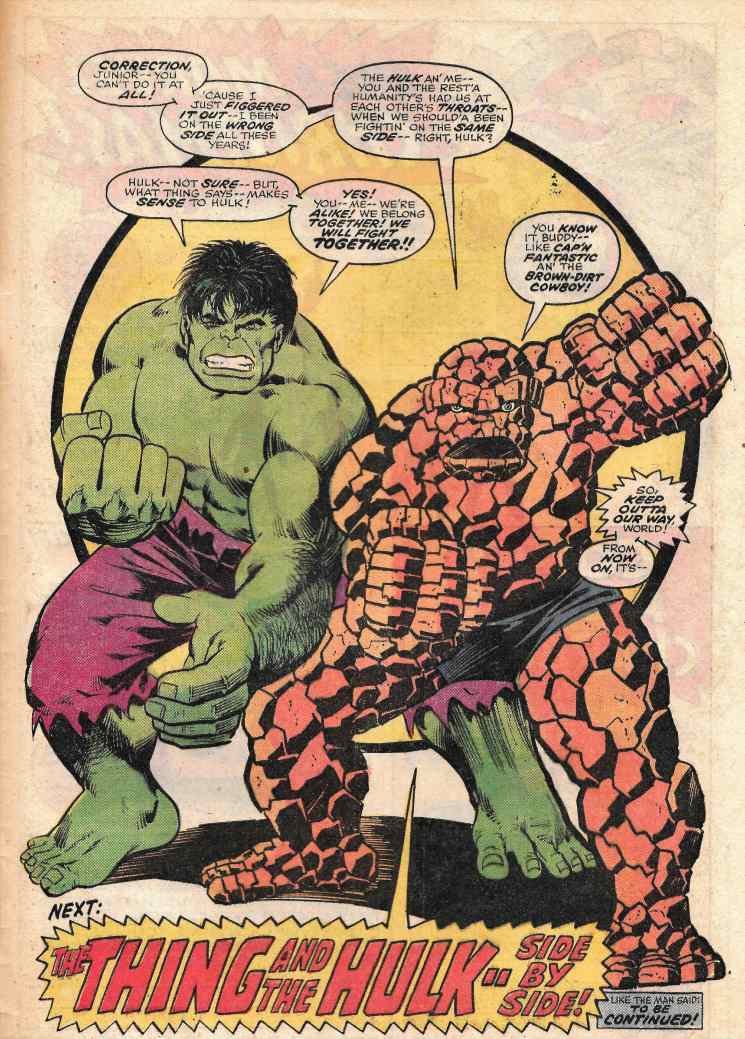 Next issue (tomorrow) is gonna be a humdinger!

AMAZING! INCREDIBLE! And like a million other positive adjectives. Can’t say enough good things about this issue. Thomas works hard to show us how Ben is feeling alienated from his team before the big twist ending and both parts of the art team are firing on all cylinders to give us a beautifully crafted story. And how about that final panel of the Thing and the Hulk standing shoulder-to-shoulder.

It’s enough to give you gooseflesh! More tomorrow!
Posted by SonOfCthulhu at 4:03 AM