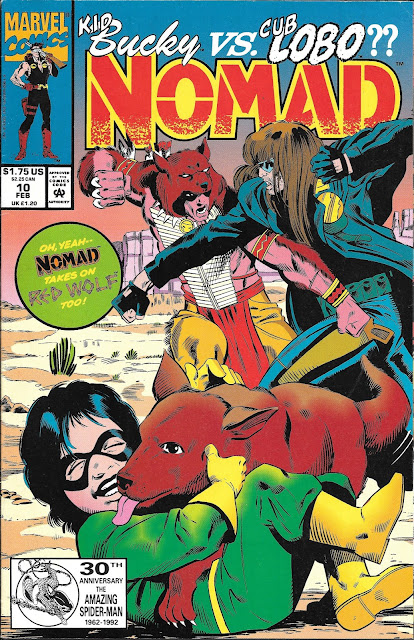 We’ve already covered the convoluted origin of the character of Nomad from this short-lived 90’s stand-alone series. Nomad was the “Bucky” to a copy-cat Captain America who took on the title while Steve Rogers remained lost in the artic, frozen in ice.

And we’ve also covered the Nomad title, which was Fabian Nicieza’s chance to wander the American experience and tell stories of heroism that fall completely off the supervillain of the week radar. The Crapbox applauds it for its willingness to take chances, the cheese factor in most of its stories, and its high availability in discount bins everywhere.

So we are going to dispense with all that and jump right into the issue, starting with the first part in this three chapter tale. This section concentrates on the story from the point of view of Red Wolf. Since he’s a minor-league hero, I should probably go into a bit of who he is before we truck on.

Red Wolf in this incarnation is Willaim Talltrees, the son of a Cheyenne tribal leader who donned the ceremonial gab of the Red Wolf to take vengeance for the murder of his family. He has been imbued by the god Owayodata with that being’s spiritual legacy and great physical strength. He first appeared in Avengers #80, where he metes out justice on the killers who took his family from him. His animal companion was a wolf named Lobo who was killed recently, causing Talltrees to adopt a wolf cub and name it Lobo as well.

As we fade into chapter one we find Nomad’s FBI buddy Hatchway waiting for the third straight day outside a church where Native American tribespeople have holed up in a dispute over some gambling machines. Hatch appears to be in poor spirits, partially from the wait and partially from all the media drawn to the scent of the blood and conflict yet to come. 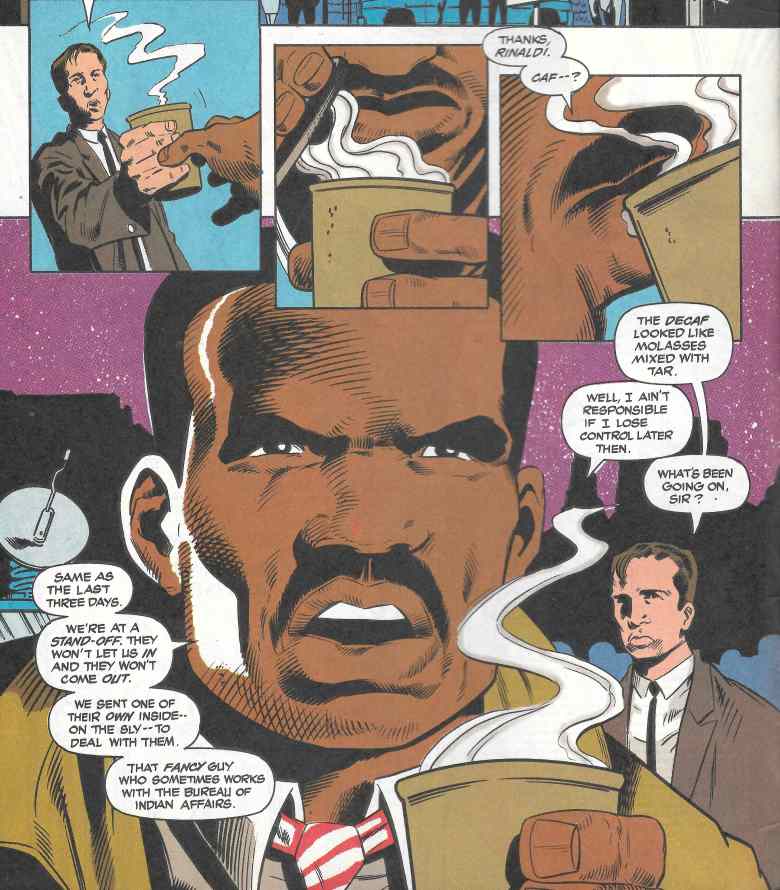 But Hatchaway thinks there might be a break in the stand off soon. Appears the government talked ‘one of their own” to go in and defuse the situation, and by one of their own I mean this guy… 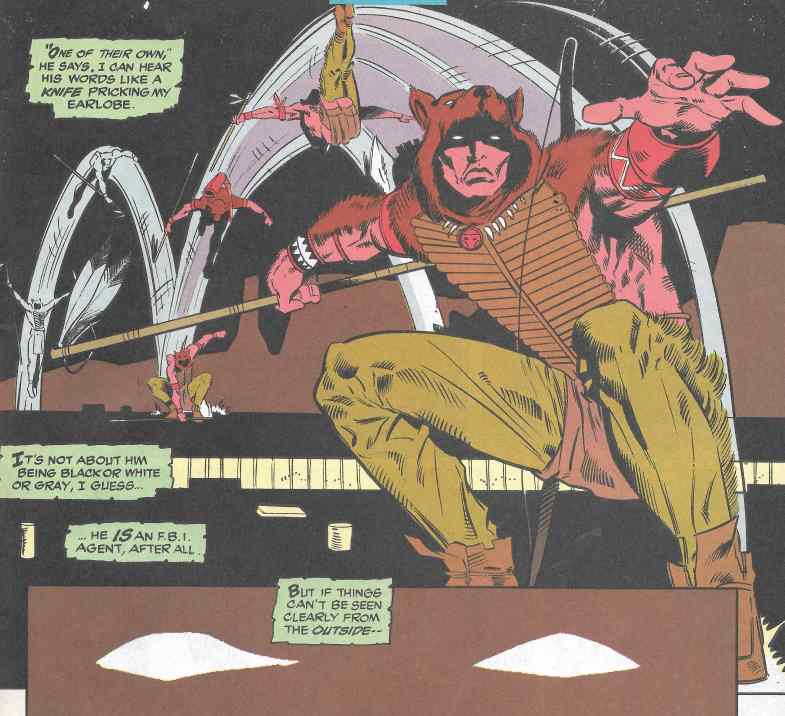 He’s going in to minimize the bloodshed if possible, which he does by taking down the guards around the property with his fists and staff instead of with bullets. 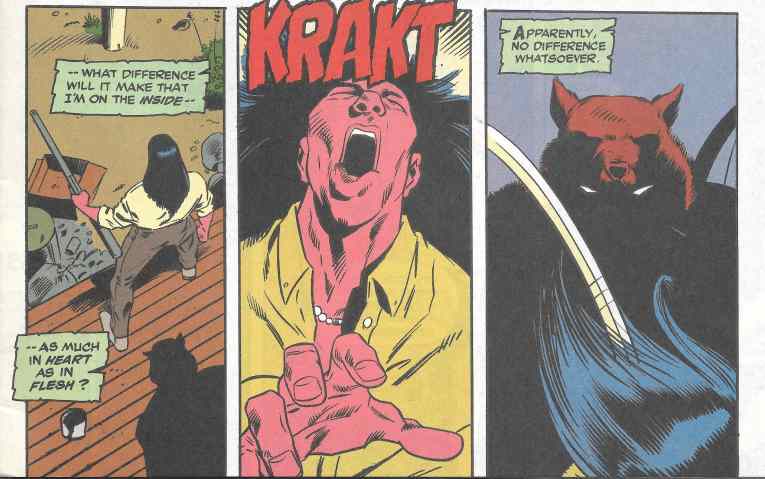 And he’s accompanied by his cute and cuddly little wolf pup. Aww! 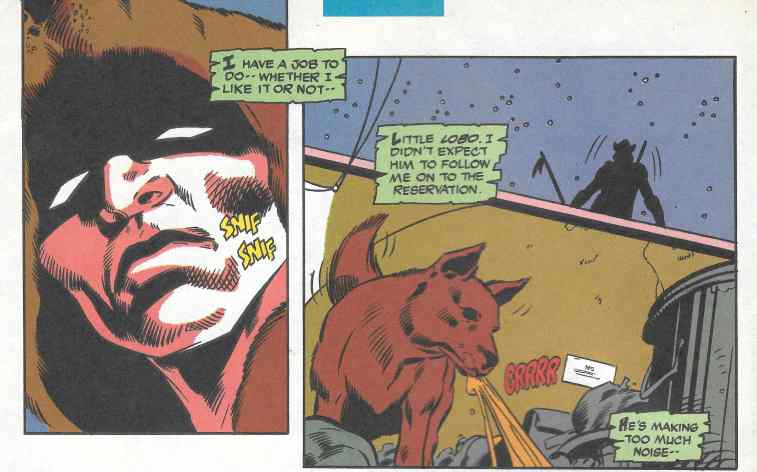 Who also makes for a handy little distraction too. 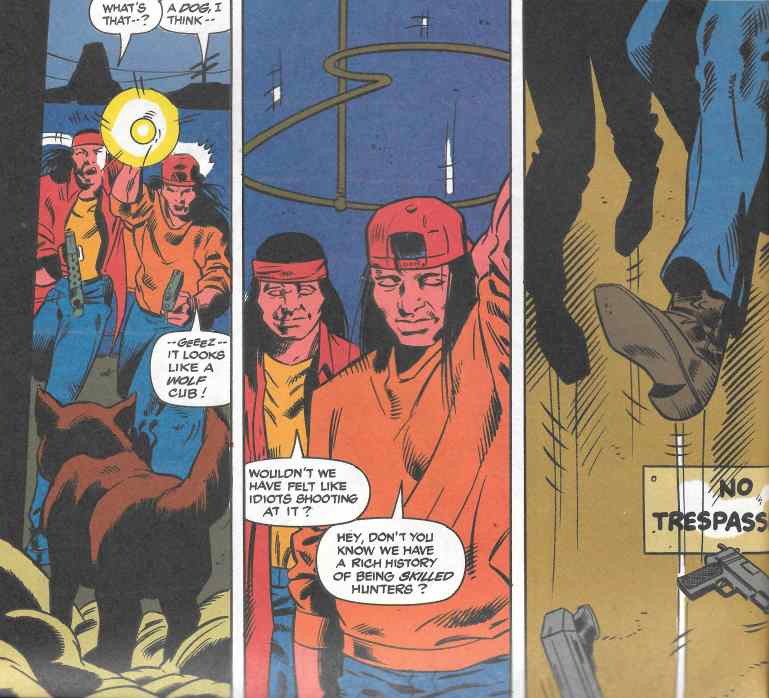 While watching Red Wolf bound away, we get some insight into his thinking process and it is clear he is doing this to cease any hostile posturing his fellow Native Americans might be doing so the Feds have no reason to escalate the matter. He’s past all their guard posts now and inside the facility. 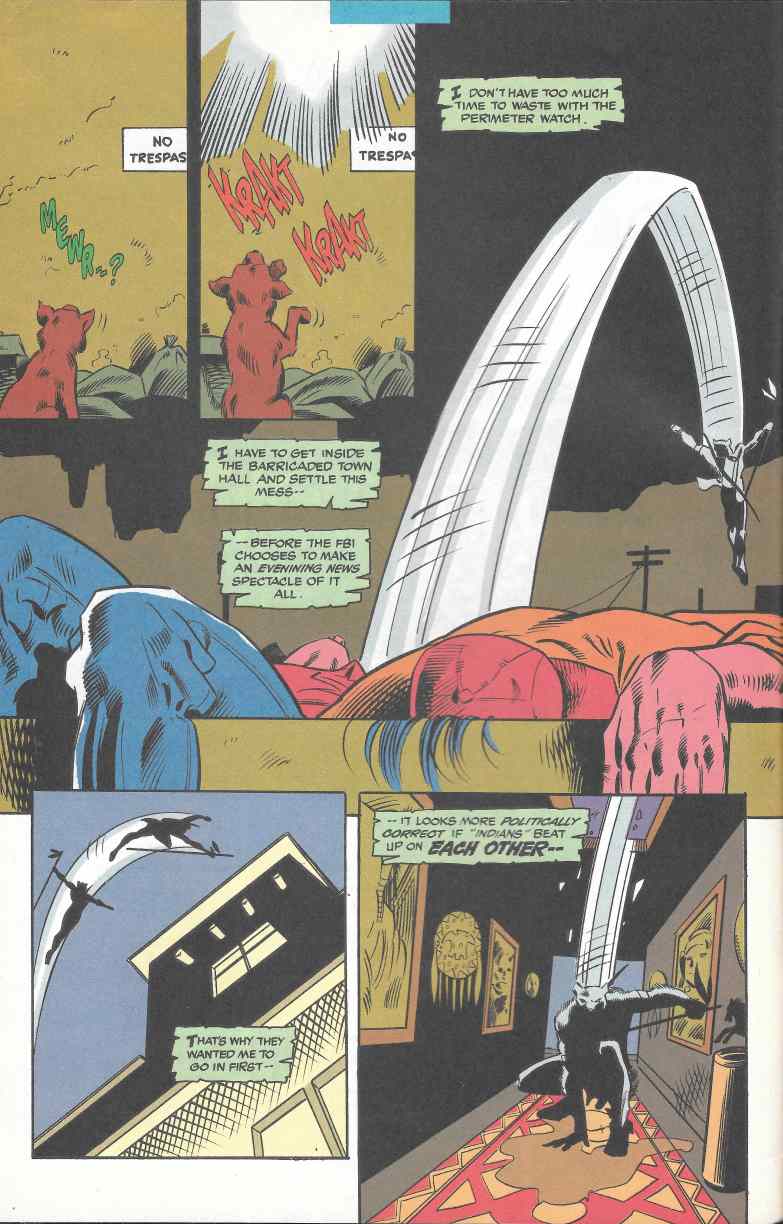 But while defeating the guards might be simple, wrestling with his conscious over what he is doing to save lives isn’t. 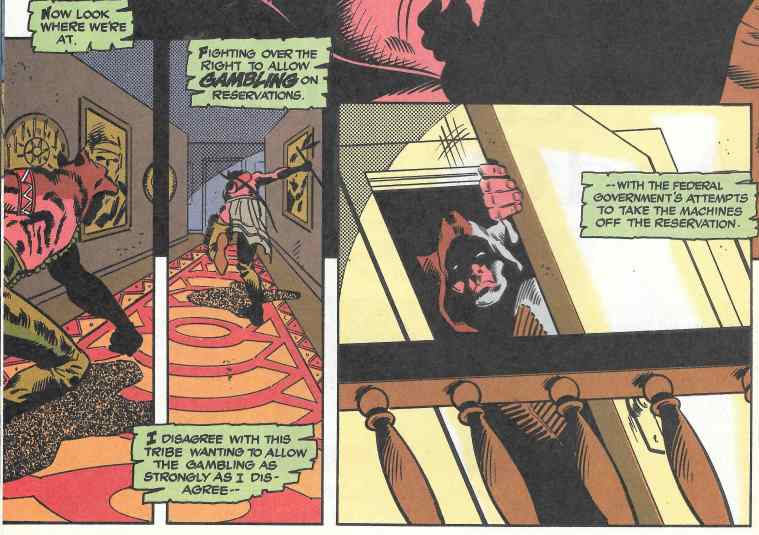 He attempts to startle everyone with his presence and force a conversation, only to have guns pointed at him. He quickly deals with the men. Ignore that “poof” of gunsmoke at the bottom. I will show you in a few how there is no way that guy fired at Talltrees. It was an artistic mistake. 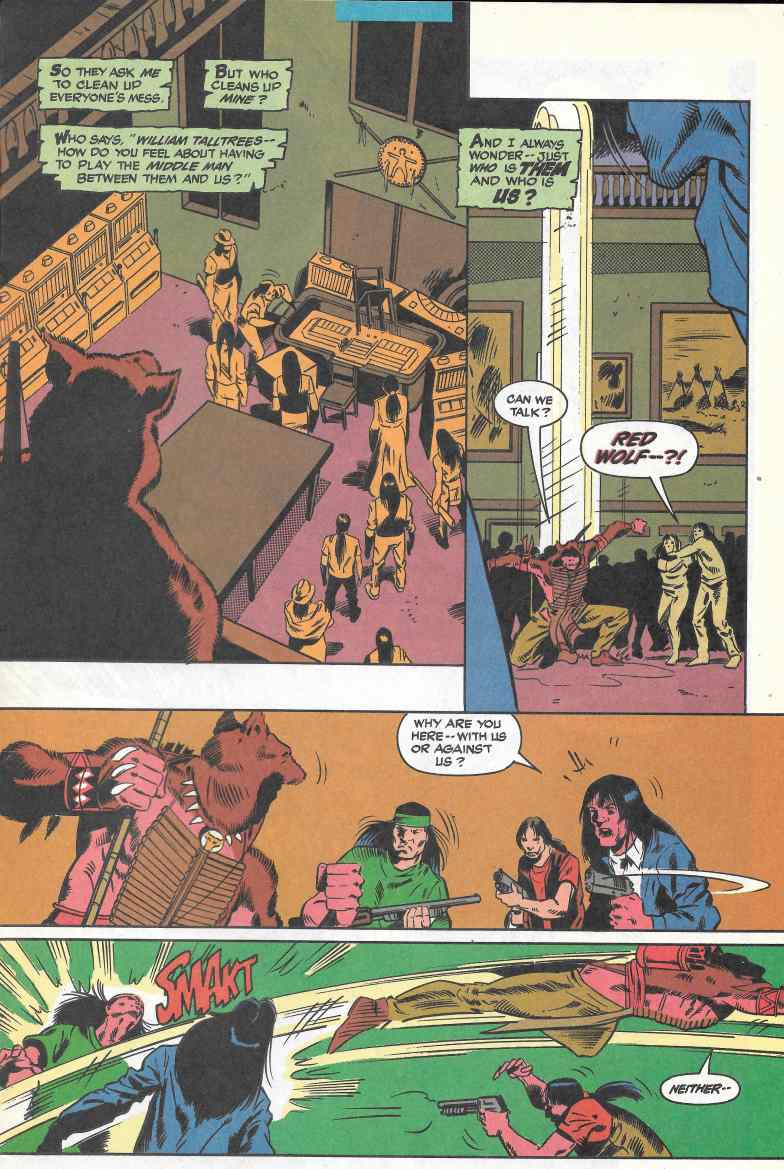 After a few flips, Red Wolf has them behind the eight-ball with a cocked arrow. It’s right about then that Nomad enters the scene, showing up on the side of the Indians who have barricaded themselves in. Story-wise, it comes as a stunning reversal, as you would expect Nomad to be working with the cops and Red Wolf to be protecting his people, but Nicieza was always one to pervert expectations it a way that lead to better stories. 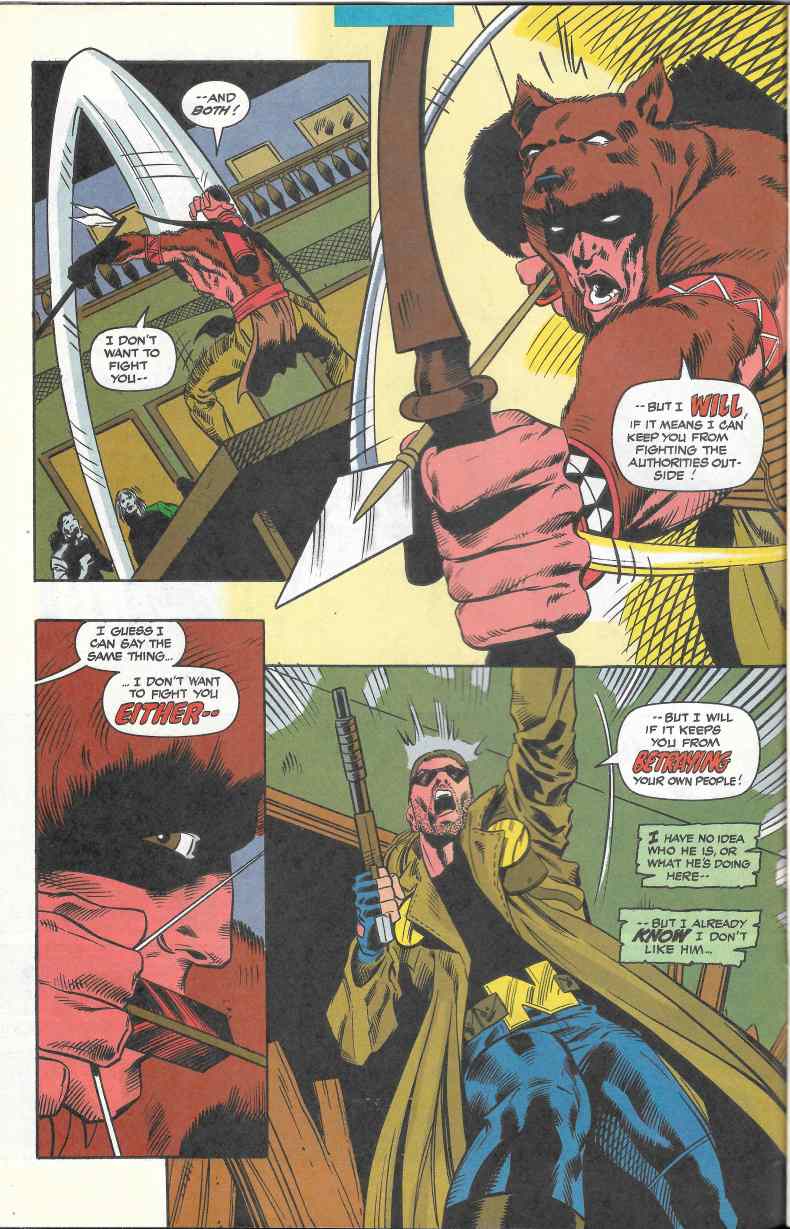 But why is Nomad on the side of the Native Americans and what has he been doing all this time? Well for that answer we need a chapter two…

Which is called Nomad and begins with one of the young Native American men claiming that if the Feds want in they will have to go through the proverbial “us,” which in this case includes Nomad and his tiny tot Bucky. That riles Nomad up a bit as it appears the three-day standoff has been in the works for quite some time. And killing officers is not part of that plan. 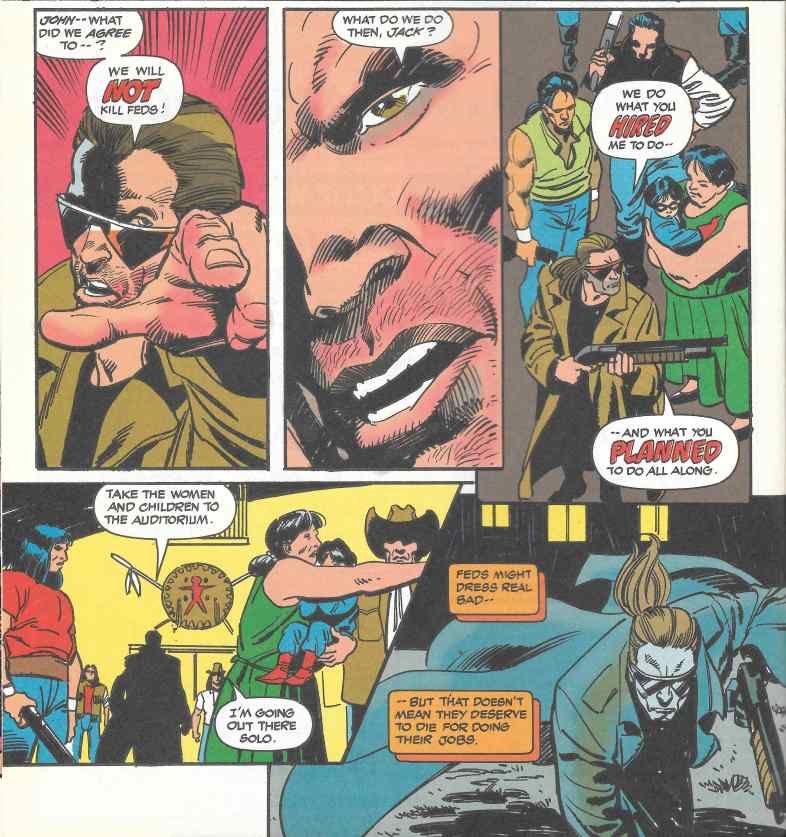 So unknown to Red Wolf, while he is infiltrating from one side of the facility, a fancy Federal SWAT hit squad is moving in from the other. They find themselves taking unexpected naps courtesy of Nomad’s patented stun disks and… 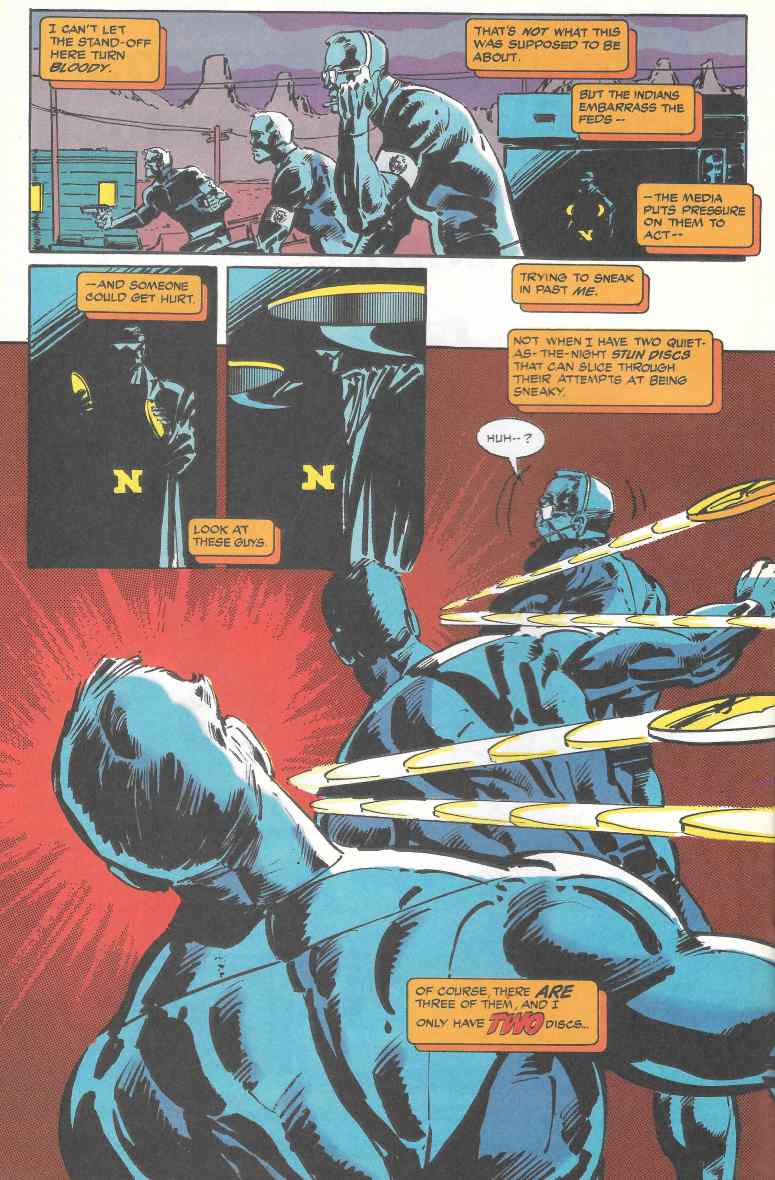 …Nomad’s fists. This nets him a head set which he uses to spy in on the Fed’s plans. And their plans include an operative called Red Wolf who is already in the building. 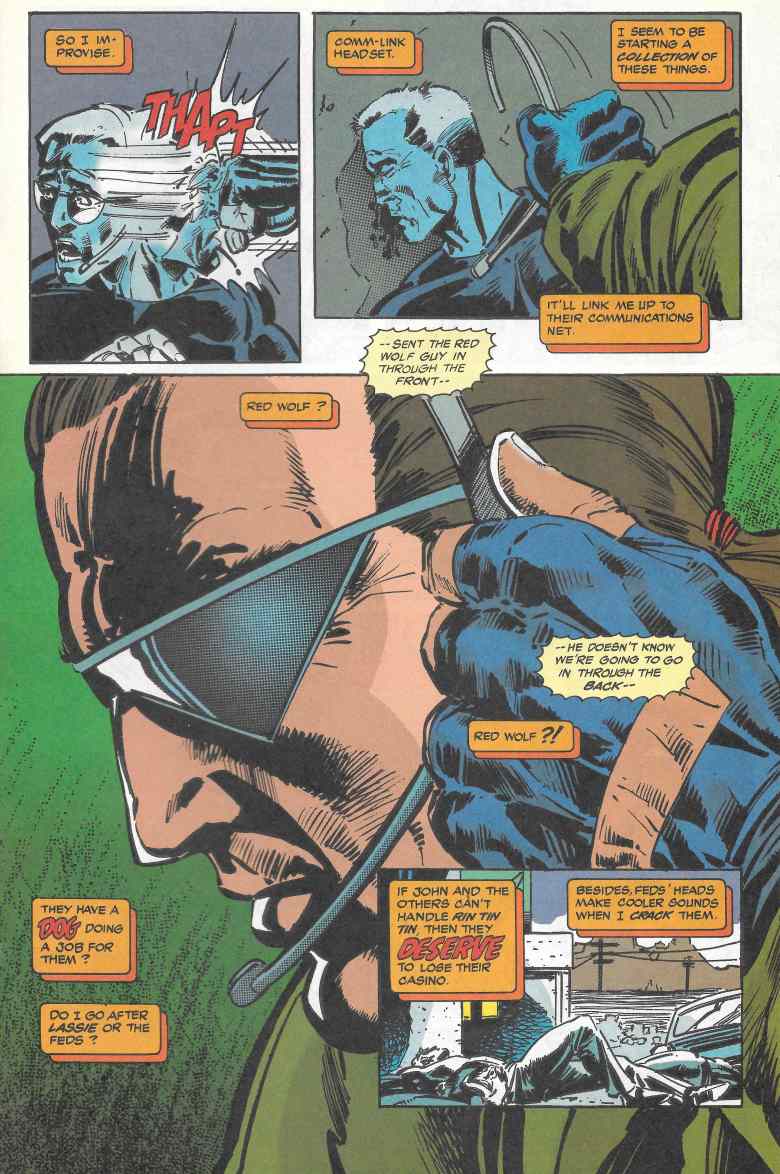 After taking out two more heavily armed agents, Nomad catches wind of who’s running this little operation from that headset he stole. Vernon Harchway and Nomad go back a ways, so he decides to get chatty. 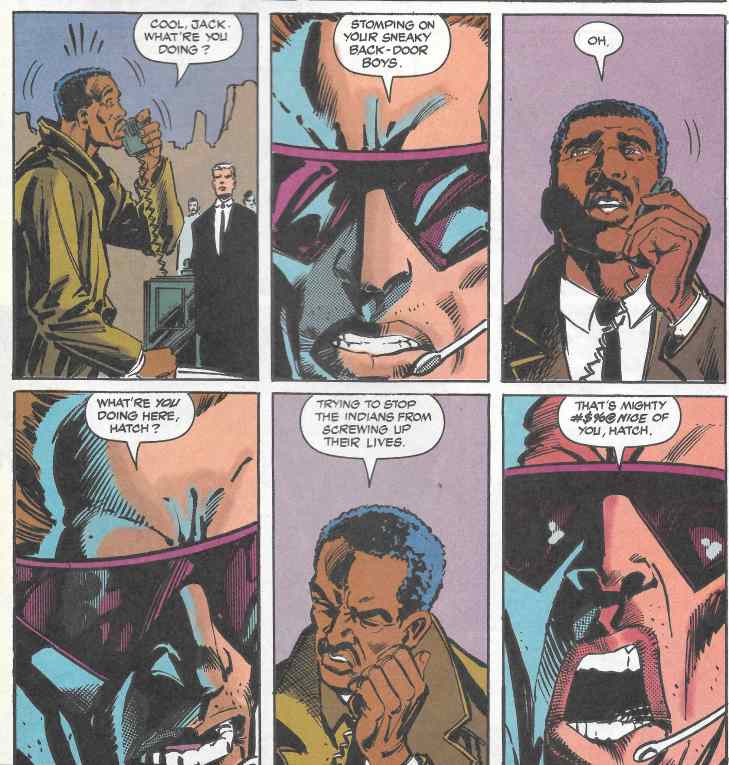 Incensed that Hatchway isn’t letting the tribe decide for itself what it wants to do, Nomad cuts off the conversation and heads in to take care of Red Wolf. What he finds isn’t quite what he expects. 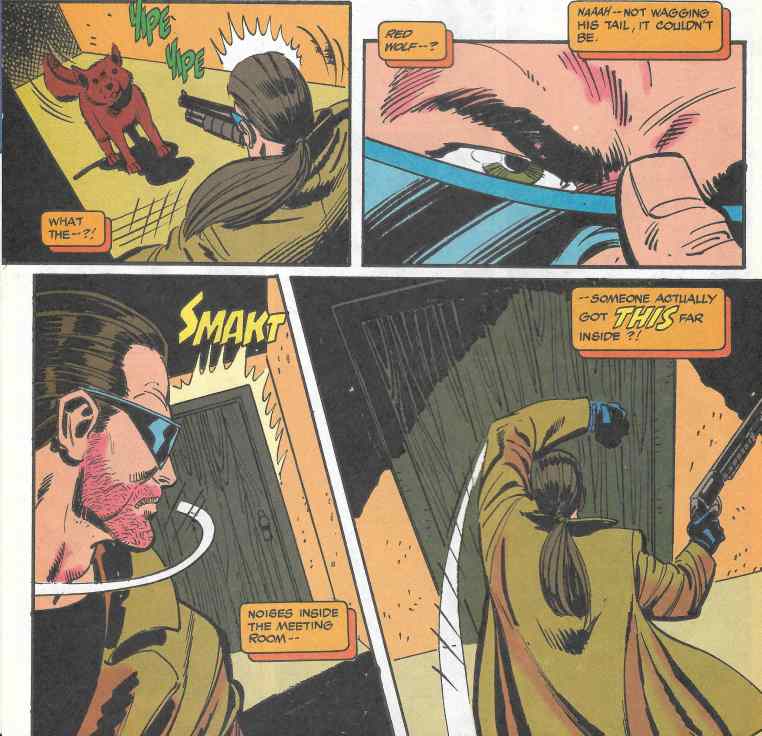 Which leads us back around to our ending face-off scene from the last chapter. 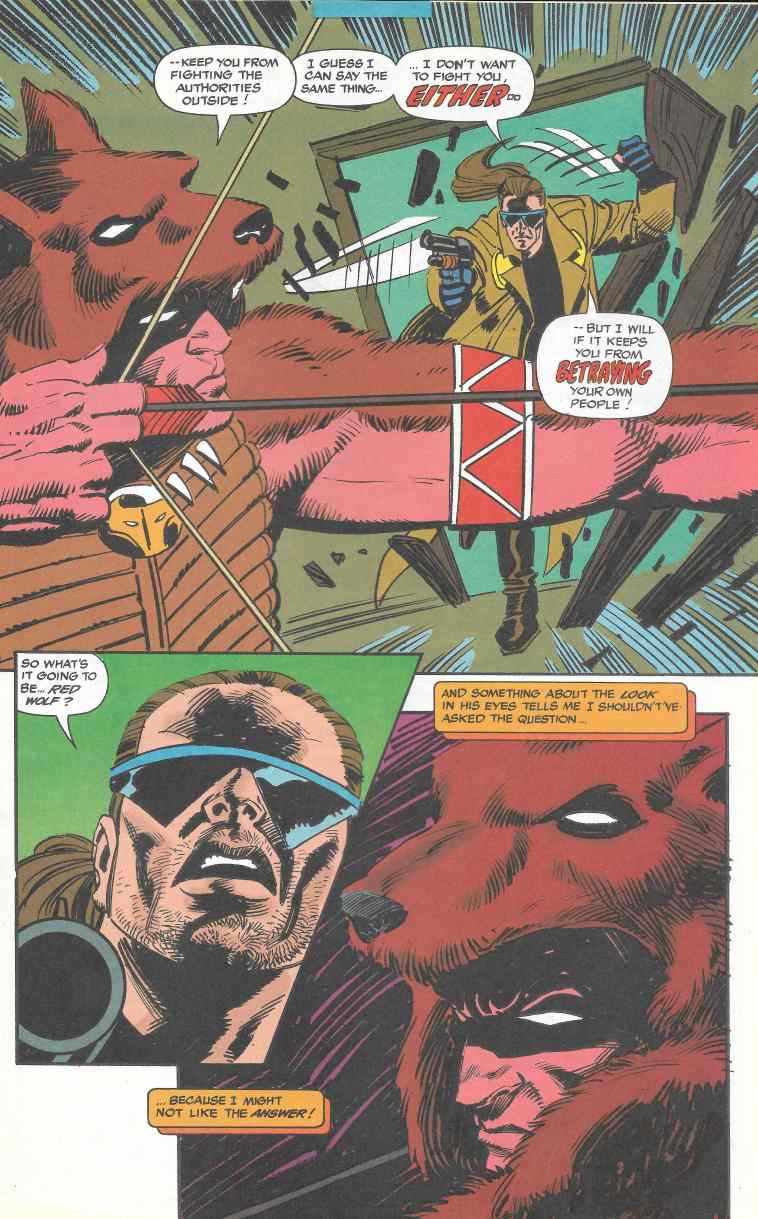 And on to the third and final story arc, that of… 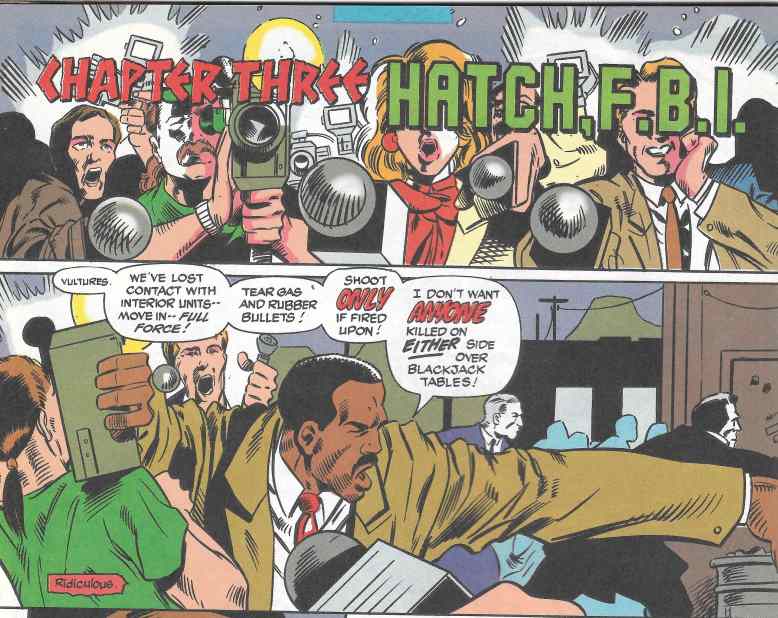 As Hatchway moves his men in, he ruminates on how he doesn’t want to be here or be a part of this stand-off. That the entire mess is about keeping the little people in their place and Hatch is just a tool the establishment are using to keep their hands clean. 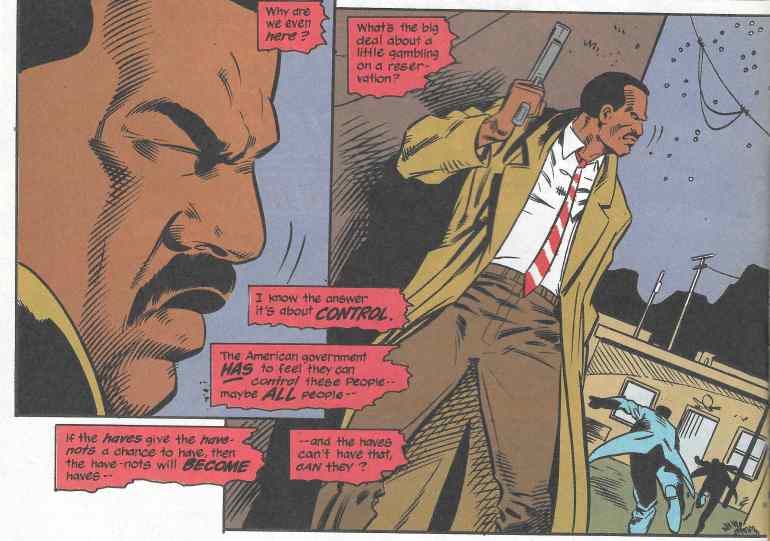 Meanwhile, Bucky gets mauled by Lobo. 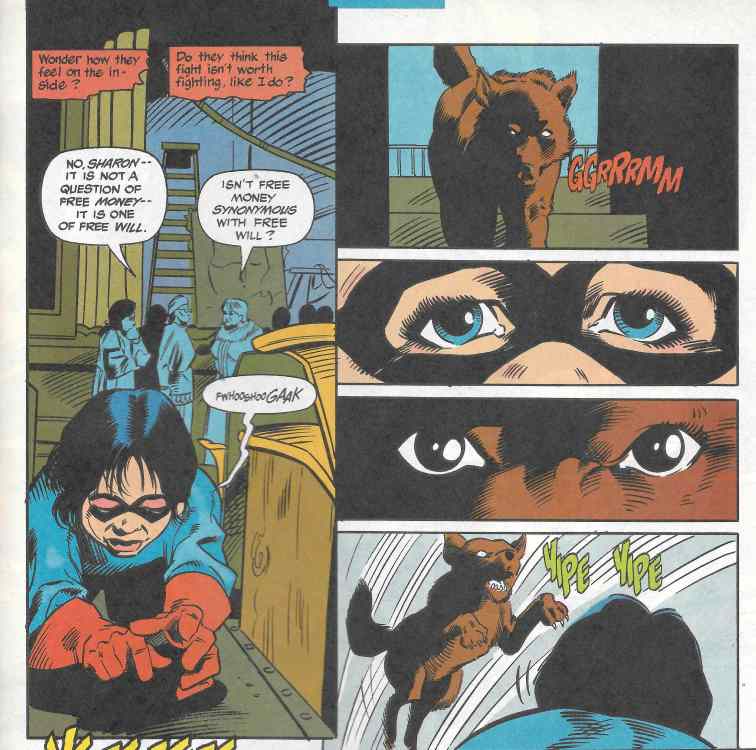 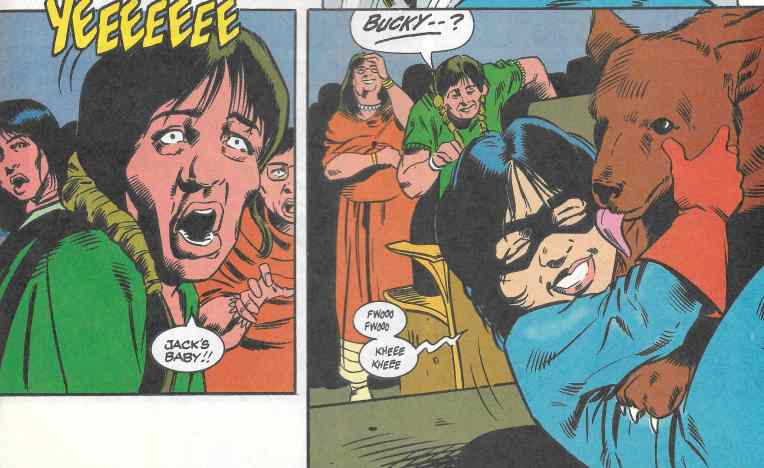 Okay, that encounter didn’t go so bad. Surely the adults will work things out without resorting to violence… 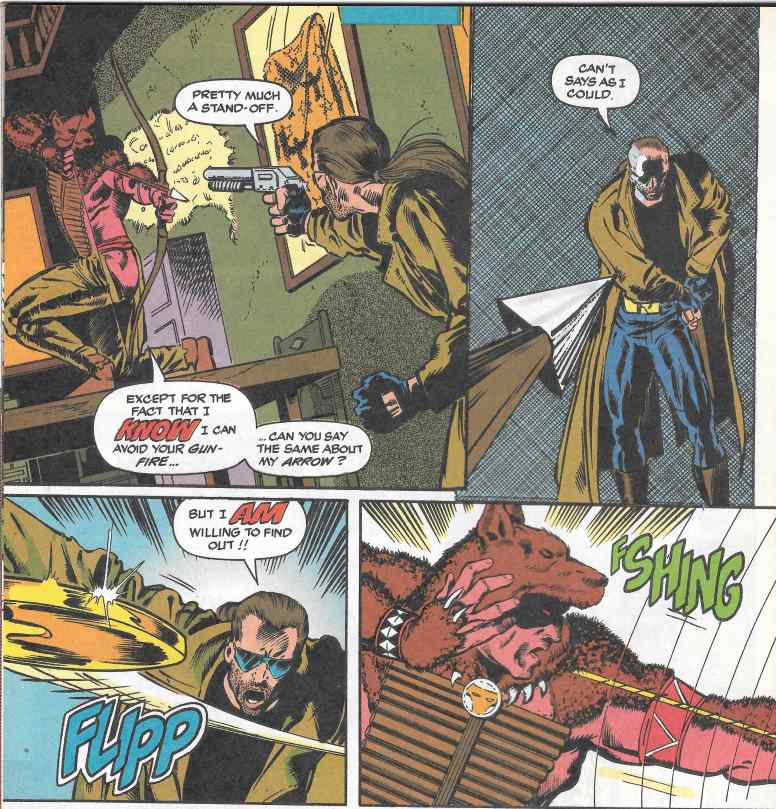 …Or NOT. Sheesh. Luckily no one is hurt in this. Which is saying a bunch because a stun disk isn’t the same as firing a lethal pointed arrow at someone who is at near point blank distance.

Seeing as how that didn’t establish which of these two is top dog (pardon that pun, Red Wolf fans), we end up with some needless punching. 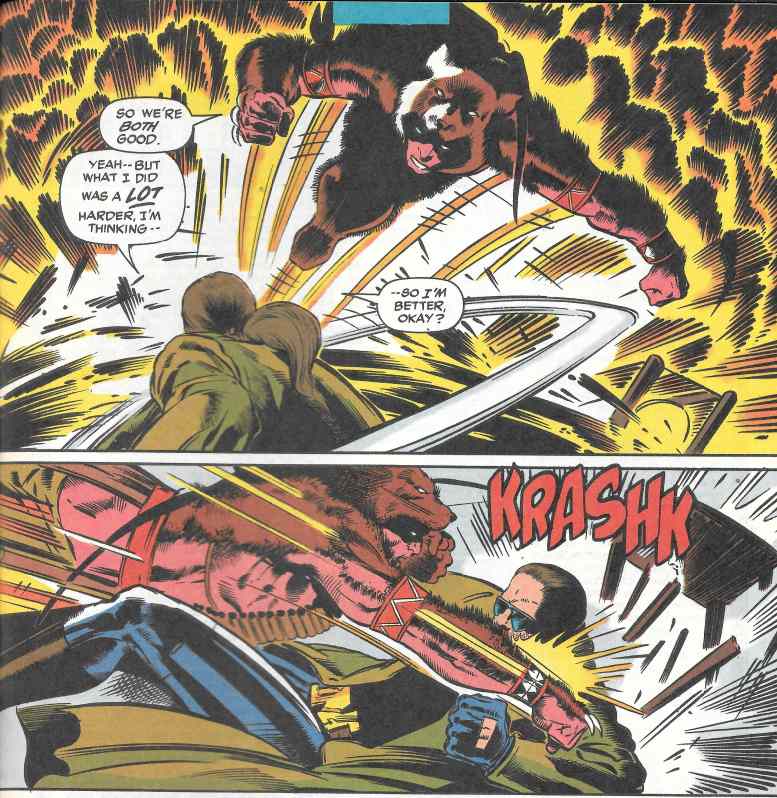 At least Nomad takes everything a bit lightheartedly while trying to keep Red Wolf from knocking his block off. Also I’m not sure legs bend quite that way. 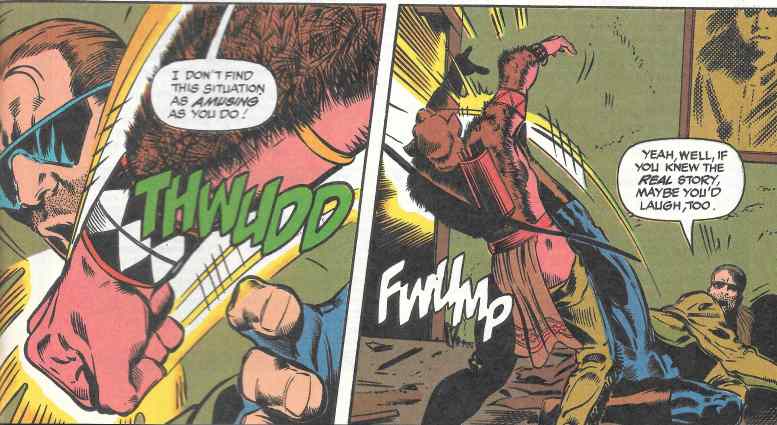 In fact, it’s almost like these two are so caught up on beating the pulp out of each other… 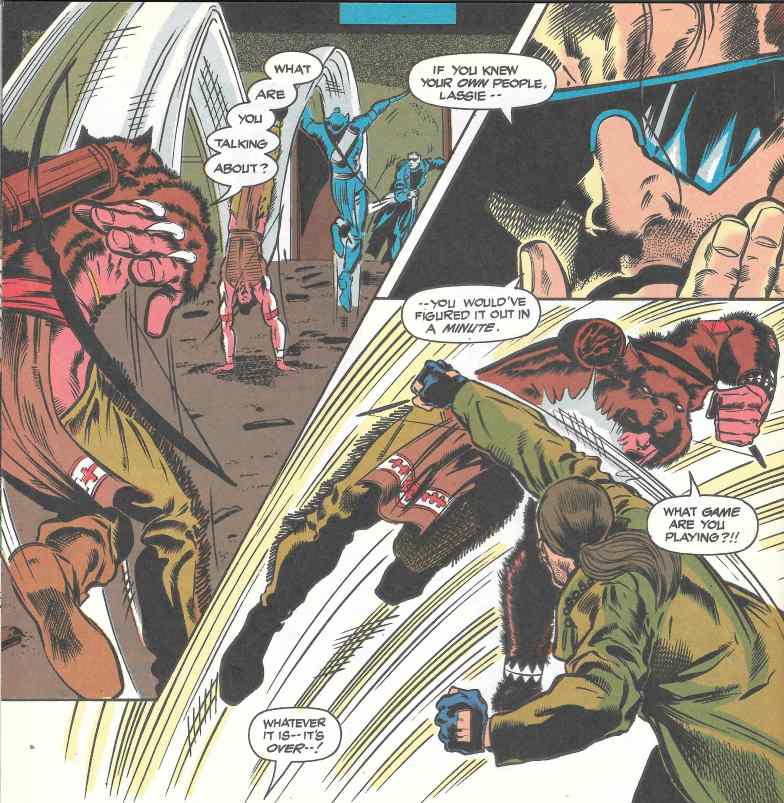 …that they forget that they are supposed to be doing anything about protecting either the Native Americans or the FBI agents raiding the place. Hatch has to step in and remind the pair. 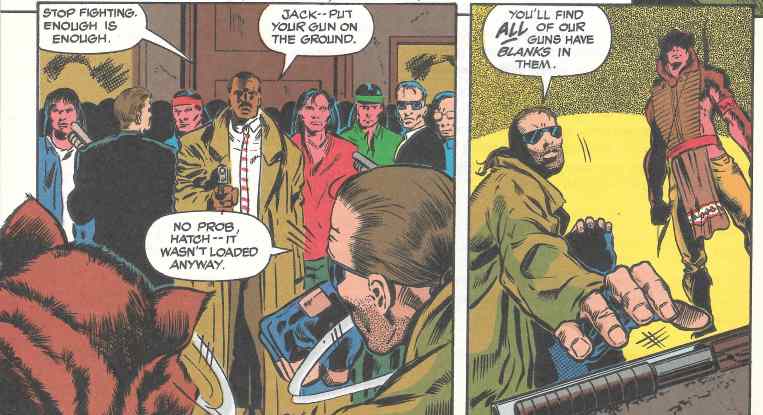 But Hatch didn’t forget. And he didn’t allow any of the Native Americans to be injured, which is great since none of them were armed anyway. Appears Nomad had the whole thing setup from the beginning with everyone having empty guns. 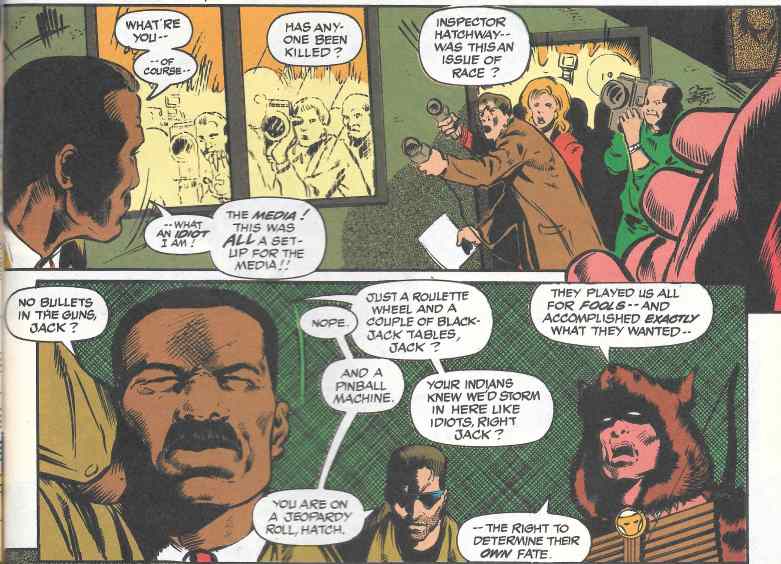 In fact the whole stunt was just to get the cops off their back and give them enough space to determine their own fate.

Red Wolf and Nomad pick up their “kids” and all looks like a happy ending, except Hatch has other ideas for one of the pair. 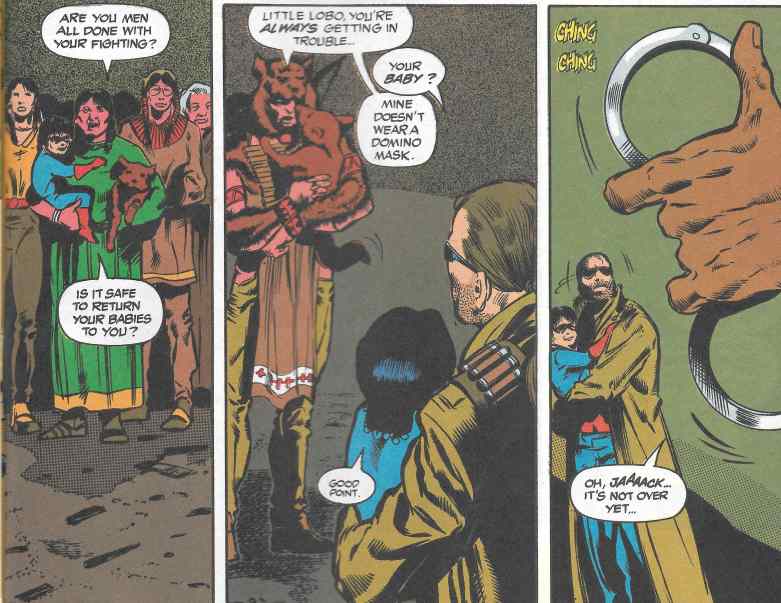 At least until he gets out of the city limits. Then Hatch sets Nomad free and the pair are back to hitchhiking while that Incredible Hulk TV show music plays in my head. 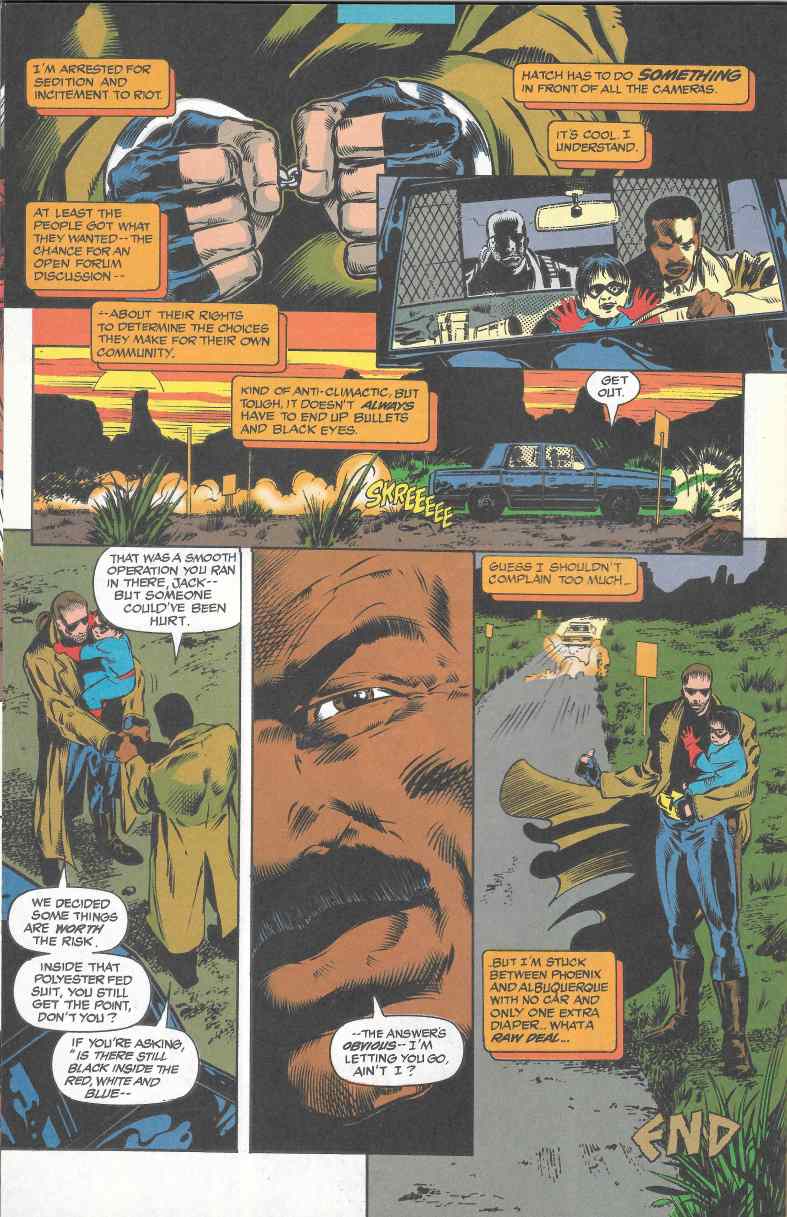 This issue didn’t have near enough of a confrontation between the two heroes and it remained cagey on how this whole stand-off business worked in the tribe’s favor. It had it’s heart in the right place, but the format of these stories were starting to wear thin at this point. And while it may have felt like Nomad was circling the drain at this point, the title actually had a ways to go before cancellation.
Posted by SonOfCthulhu at 1:56 AM