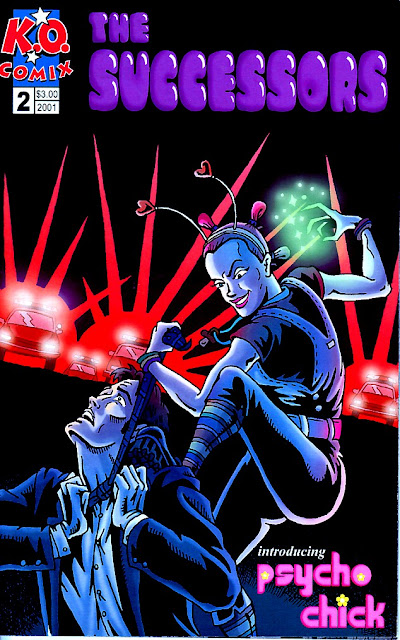 Hell hath no fury like a superpowered woman scorned

The Succesors was produced by K.O. Comix in the early part of 2001. With the tagline “Comics that will punch you in the face. No, really. In the face.”, K.O. promised comics that were a bit different. The Fullerton, California based publisher was the brainchild of writer Russ Kazmierczak (The “K”) and artist Brent Otey (The “O”). According to their website, the history of K.O. Comix started in a soul food restaurant in San Diego after the pair spent the weekend at Comic Con and couldn’t figure a better way to get close to the Heavy Metal chick. I really hope that the boys had more success getting some play from her than they had in the comics business.

K.O. produced two comics titles and a handful of minis, magazines and short fiction tales, all of them the work of Russ and Brent. The only work that made it to issue number two appears to be The Successors. If the Internet Wayback Machine is to be believed, they were still hawking the same exact issues in 2005. Sometime around then the web site appears to have gone belly up with only the home page remaining.

Issues one and two of The Successors each introduced a new character who gains superpowers when a cosmic rift drops dying superheroes into their dimension. These mortally wounded capes transfer their powers to the first person to touch them, making for this planet’s first round of superhero characters. Our second issue focuses on Ferrah Monet, a teenage girl who adopts the handle Psycho Chick. And boy, does she live up to it.

Our issue begins near the end of its story, with Psycho Chick confronting Brandon Ferris, the love of her life, at the Senior Prom. Brandon is just your normal average everyday teenage boy. He’s made a trio of mistakes, however. One was inviting Ferrah to a classmate’s party a few months ago. The second was spurning her continuing advances. Lastly was taking another girl to the prom. All this has lead to a confrontation with Ferrah, who now is exhibiting “phenomenal cosmic powers” and a fit of jealous rage to match a Jerry Springer episode. Here he is cowering before her geeky visage. 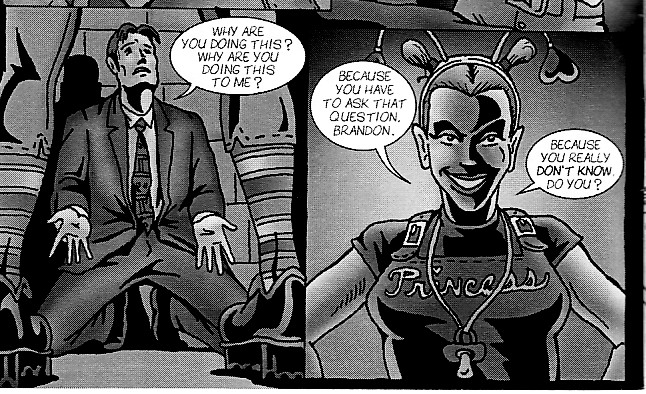 I dig the art in the book. It’s clear and does a good job with expressions and characterization. It’s genuinely nice to see a self-published work where the art doesn’t look juvenile or amateurish. Both these guys should have stuck with it. We might have gotten some great stuff out of them later.

Ferrah’s glowering over Brandon is interrupted when one of her teachers comes forward to stop her. Mr. Schrader will be a major character as the story progresses, sharing narrator duties and being the only character who could truly judge Ferrah’s actions by the story’s end. Schrader tells Ferrah that she won’t win Brandon back acting this way and the she should stop before she does something foolish. But our newly minted Psycho Chick isn’t having any of that. She spits more than just Mr. Schrader’s words back at him. 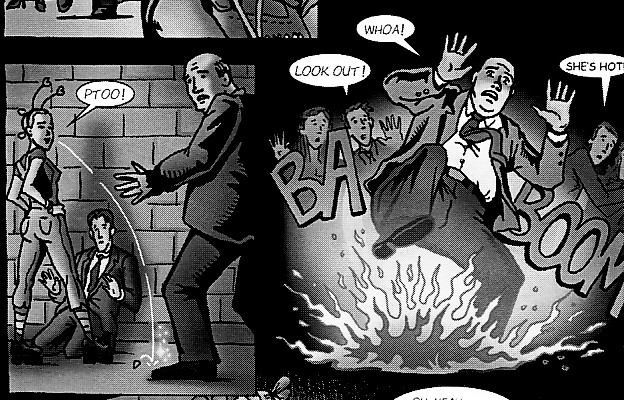 Handy! She’s great on camping trips folks. Invite her over when BBQ season rolls around. As we will soon see, explosive expectorant is just the tip of Ferrah’s iceberg of powers. And as Psycho Chick begins recounting why she’s tormenting Brandon, the audience begins realizing that a few sessions of emotional consoling might have headed this all off.
Ferrah recounts how she first hooked up with Brandon. Seems Brandon invited her to a party at a friend’s house. Ferrah felt a bit self conscious and didn’t quite like the punch they served. It was “sweet with a sour aftertaste.” You and I would call it spiked. But all that nervousness evaporated when Brandon showed up.

So Brandon hits on her a bit. I’m not seeing him do anything wrong here. Next Brandon puts the moves on her by inviting her to the local look out point. She accepts and Brandon gives his buddies the high sign. 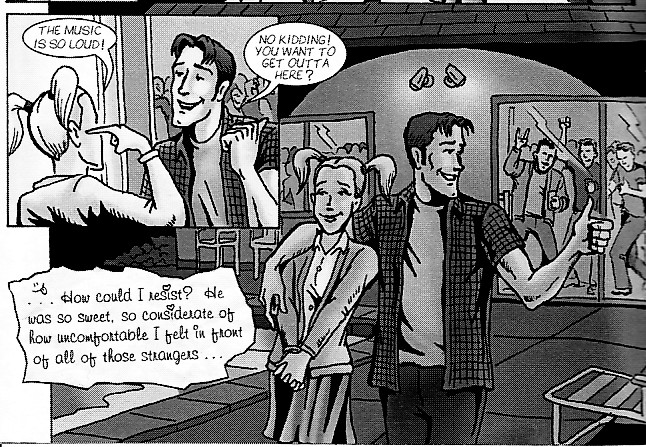 The story transitions back to the present here and Psycho Chick decides a field trip to look out point is needed to jog Brandon’s memory. She flies off with him, dragging the poor guy by his necktie. Once there she accuses him of bringing other “unsuspecting bimbos” up there to…well, let’s just let Ferrah tell her story of what he does with girls up there: *GASP* He makes out with them! Oh, the shame!

At this point, I’ll admit that Brandon is taking advantage of Ferrah’s naiveté. However at no point does Ferrah put the brakes on him. And it’s asking me a bit much to really come down hard on him if the only thing he apparently did was make out with you. At no point does the book even suggest that he copped a feel or made it past third base.

So Psycho Chick is upset for having her affections spurned. By a guy who made out with her. Once!

Our story jumps back to the dance at the gym in the present at this point, where Mr. Schrader is recounting how he found out about Ferrah’s crush on Brandon. Appears she spilled her heart out to the teacher while he was helping her study after school one day. Schrader didn’t tell Ferrah at the time that Brandon was a bit of a boy-slut, but just listened as she recounted where Brandon took her after the party. Seems she also thinks he might ask her to the prom. Brandon, on the other hand, doesn’t seem to have taken their swapping spit with the same degree of seriousness. His reaction to her first love note to him: 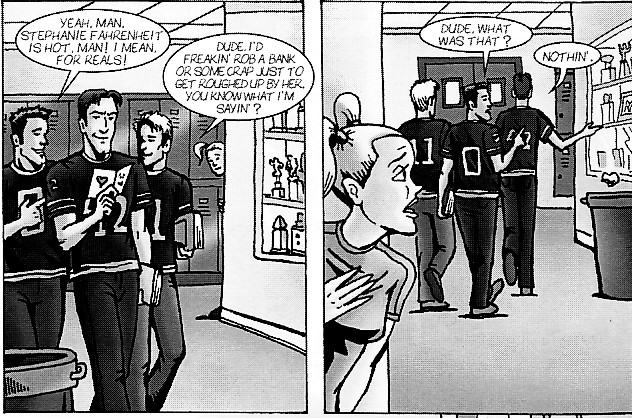 By now I’m queuing up the Fatal Attraction music in my head. I sure hope Brandon doesn’t have a pet rabbit. Ferrah is caught sobbing into her pillow by her sympathetic Mother.

Ferrah’s Mom is a great shoulder to cry on, by the way. Her advice almost screams “become a lesbian.” Of course Ferrah, having only about 49 cards in her deck, takes this advice to another extreme no one could have guessed. She spends the next week stalking Brandon and leaving tokens of her affection with love notes every place the guy goes. Brandon should start looking over his shoulder.

When he doesn’t take notice of the love notes taped to his locker or the stuffed bears holding balloon hearts, the candy and flowers left on his truck, there’s only one thing left for Ferrah to do that will prove her love for him: get him a pillow embroidered with his football number! When suddenly, IT happens! 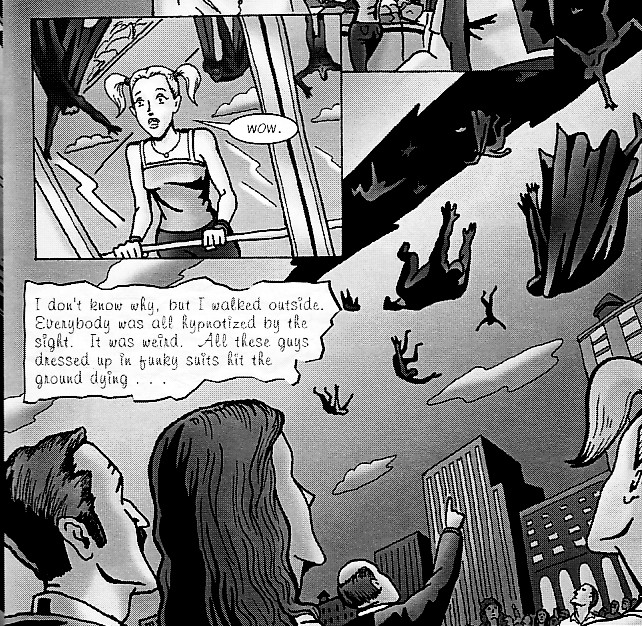 Ferrah touches one of these fallen superheroes, but doesn’t realize she’s gained superpowers from him. She rushes off to tell Brandon only to find him in the arms of another woman. Not only that, but he explains that she’s just some “psycho chick” when the other girl asks about Ferrah. Heartbroken she looks for sympathy from Mr. Schrader, who tries to make her feel better by saying in essence that Brandon whores around with a lot of girls. It’s no wonder that Ferrah’s eggs are pretty scrambled. 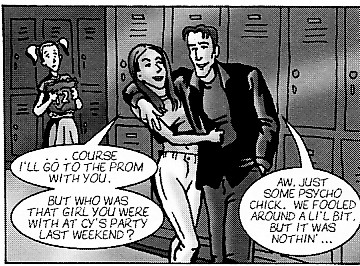 When her superpowers manifest themselves, Ferrah is in Glen Close mindset, ready to make Brandon pay for not feeling any chemistry. 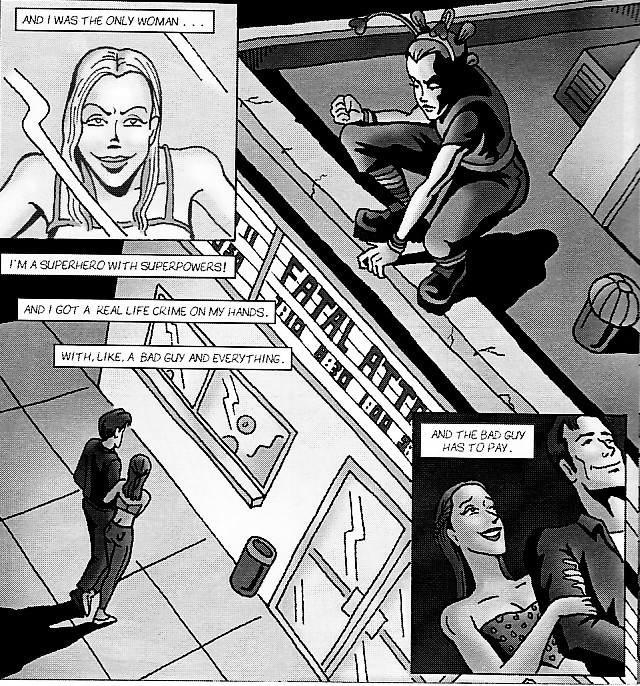 Poor guy, feel sad for him. Also for his prom date. She steps on some gum. As bad as that usually is, Ferrah’s blossoming powers makes it a hundred times worse. First however she confronts Brandon’s victim, who appears ready to fight for her chance to be groped and cast aside. 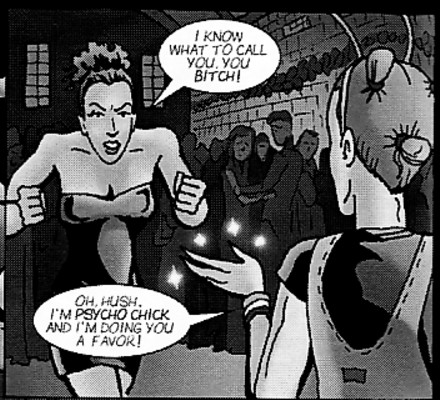 Unfortunately that favor involves encasing this poor young lady in a gum cocoon. Now I always forget, is it peanut butter or ice that gets gum out of hair? 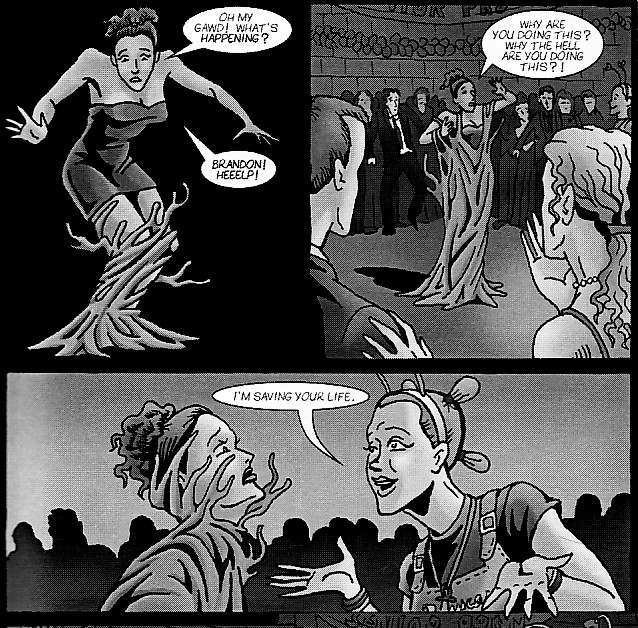 I think the worst part of all this is that the gum appears to be prechewed. Oh, and the fact that Psycho Chick doesn’t leave the girl any air holes, possibly killing her. Well, her handle does being with the word psycho. It’s at this point that the story comes full circle. Ferrah is surrounded by cops on top of makeout point. Mr. Schrader is trying to talk her down with out causing her to kill Brandon. And Ferrah settles her score with Brandon. Whew! I thought he was done for. Of course as Ferrah turns herself over to the cops… 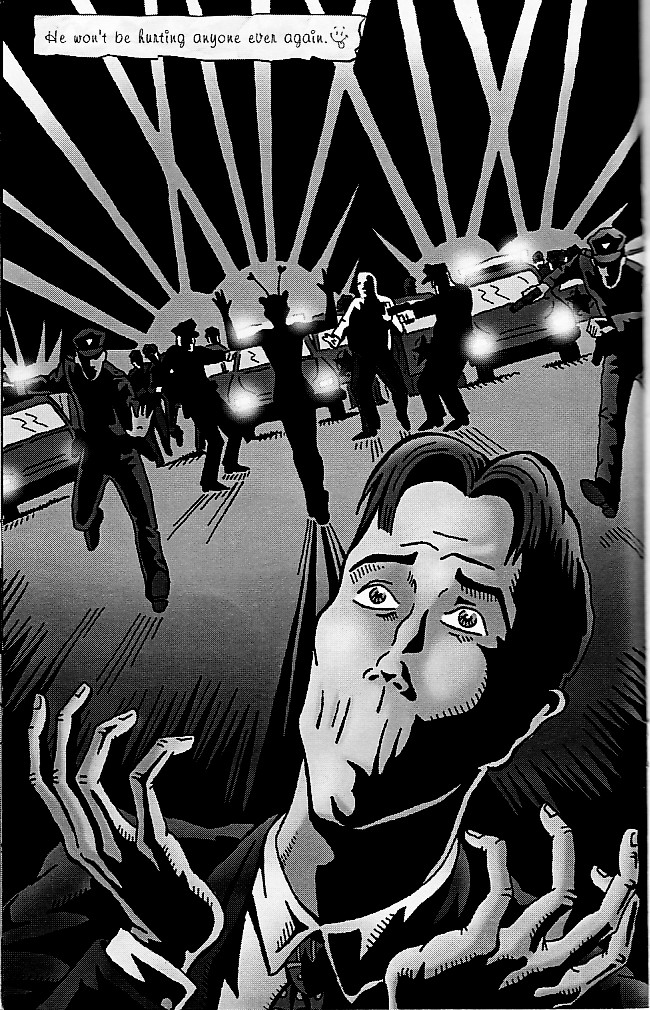 ...however, that ending leaves me speechless.

Posted by SonOfCthulhu at 5:19 AM