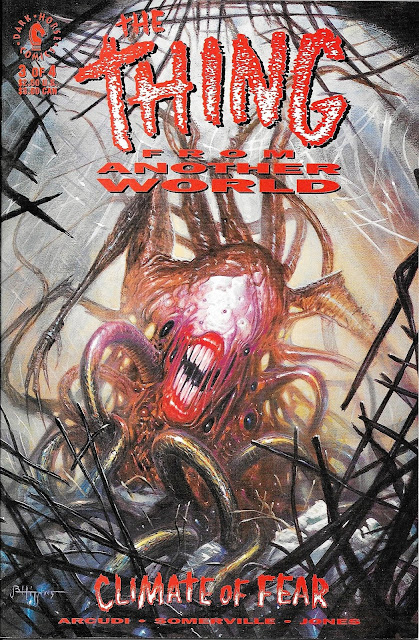 Is it real or imitation? Unfortunately it's the latter

John Carpenter's adaptation of John W. Campbell's short story Who Goes There? is possibly one of my top three favorite horror movies. Certainly in the top five. The atmosphere set by Carpenter and Ennio Morricone's  soundtrack, the top-notch performances by Kurt Russel and the entire cast, the amazing and astounding practical effects by Rob Bottin and Stan Winston combined with deft direction and cinematography create a pervasive and constant undercurrent of paranoia.

It is a perfect "trapped in a box with a monster" story and there is only one movie I feel does it better. More on that one and its eventual tie-in comics later.

At the risk of sounding a bit silly, I don't want to spoil the movie for anyone who might not have seen it yet. So I implore you few who haven't gazed upon The Thing's frightful magnificence to STOP, right now and go watch it.

This review spoils a few things (like the ending, which I've always felt was one of the best endings of a horror movie ever, almost but not quite as nihilistic as The Mist, exactly as it should be for a film in this genre.) So from this point forward, I ask that you only proceed if you've seen the film.

Climate of Fear is the second of three book series that furthered the adventures of Childs and MacReady after the ending of the movie. I have to take a point off for the thought of even continuing with the same characters since the entire climax of the movie is based on the characters having given up on trying to survive, believing it would be better if they died.

Point off or no, the first series sounds like a natural outgrowth of the movie, with MacReady and Childs splitting up, each going a different direction in an attempt to find shelter from the Antarctic temperature. MacReady makes it to the coast and is luckily picked up by a fishing vessel. He spends time testing his blood, worried that he might be infected. Determining that he isn't, he starts worrying about the bodies left at Outpost 31.

His concern leads him to steal the fishing vessel's helicopter and fly back to Outpost 31. Once there he encounters a battalion of soldiers who believe he went insane and killed everyone in camp. One of them gets infected from the sole remaining corpse MacReady hasn't burned yet and off we go. Lots of mayhem ensue, Childs shows back up with an Argentinian team from a base camp nearby. Everyone ends up in a submarine with one of the things coming after them, to which MacReady's only option is to sink the sub, exposing the Thing to the freezing cold water, killing it. MacReady somehow makes it to shore (I have no idea how this is explained, don't have that book) and a cliffhanger ending ensues as he slowly freezes to death.

At the beginning of "Climate of Fear," MacReady has been evacuated to Tierra del Fuego, an archipelago on the southernmost tip of South America. The evac team brought something else back with them too, as Mac learns in the first two issues of this series.

Which is pretty much game over. I'm sorry but Tierra del Fuego houses MANY different species of animals that the Thing could take advantage of and bingo – that's the end for the human race. That this issue even pretends there is some kind of chance of "catching" all the things is asinine. The first victims it takes are all the sheep in the pasture. All of them.

I'm not sure the writer realizes how easy it would be for a creature like the Thing to take advantage of the available diversity of the local ecosystem to just blend in and disappear. Hell, even if it has to have warm-blooded mammalian lifeforms to convert, you are still talking about the availability of countless mice, rats or rodents that are underfoot without detection.

That was what was big about the location the original story took place. Antarctica is remote and desolate, with very few creatures that the Thing could meld with. Place it in an area connected to a major continent? Forget it. The creature is smart enough to just begin spreading itself among the animals and ignoring the humans for a bit, snagging a stray here or there. But mark my words, the entire premise of the story is ruined the instant we change locations. Because there is no "win" now, humanity is doomed.

But enough about that. Given that these imbeciles don't think this through even after having watched an entire flock of sheep become something malevolent and bent on their destruction with the power to assume the shape of another animal, we continue on with the same premise as before: tie up the humans and test to see who is not an "other."

As has happened before, someone has made MacReady look like he's infected. The guy holding the gun on him is Childs, who has somehow escaped all the crap that happened with the sub, showing up here at the ending of last issue with a complement of American soldiers in tow. 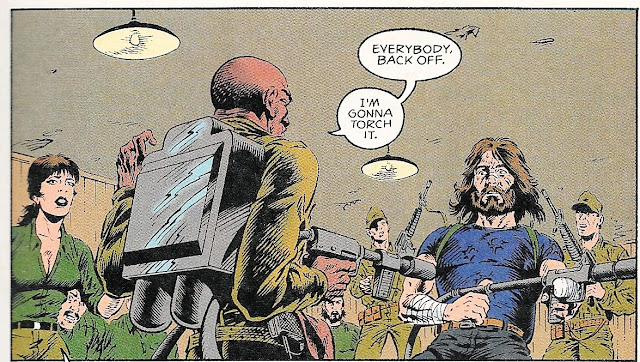 Which leads Mac to deduce who the real culprit is just like in the movie. And then we get a shot of a thing trying to escape being roasted, just like the movie… 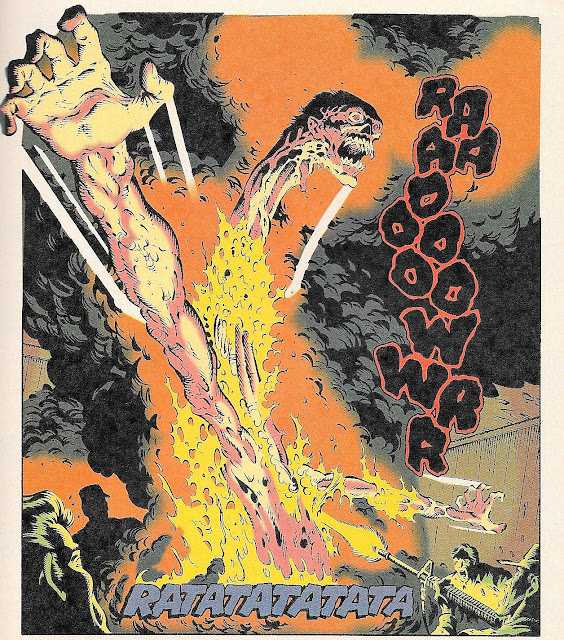 Okay story, we are on page 3 and you haven't shown me anything but a retread of scenes cribbed from the movie. Be original. 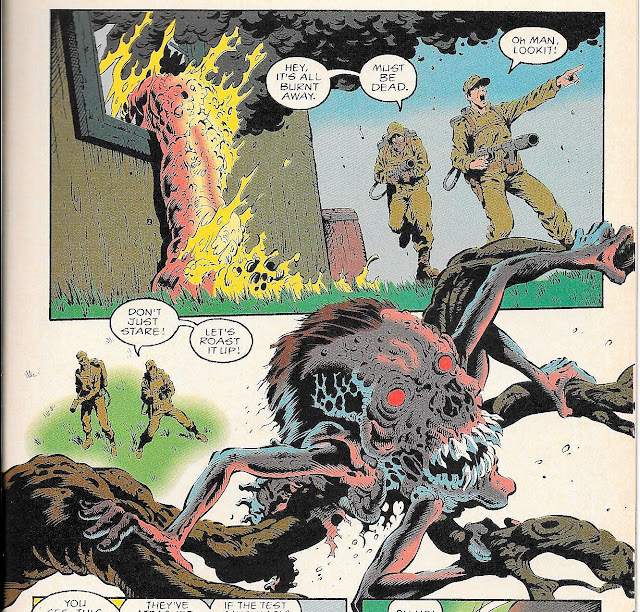 But no, we get escaping head monsters, just like in the movie. It is kind of a letdown to read these first few pages and feel like the concept of this has been played out already. Also I can't get away from how poorly envisioned the series is because the abundance of life equals places for the thing hide make this game over for everyone anyway, but whatever. I just need this book to be more than a retread in a tropical environment at this point. 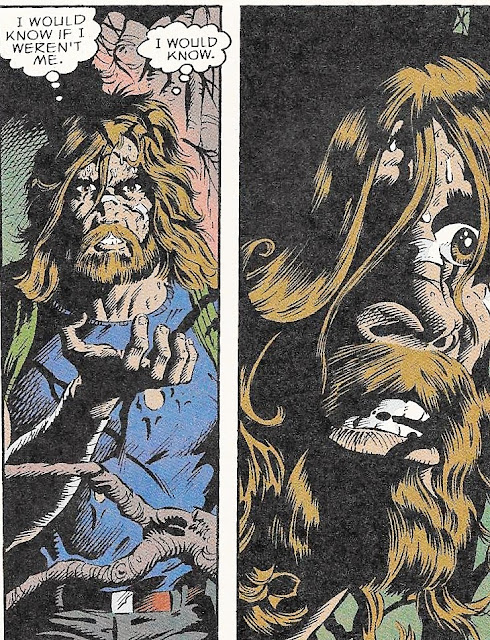 In the chaos that follows, Mac escapes and we get a few shots of him worried that he might be infected and asking himself how he would know if his body had been taken over…which undermines the character somewhat. That was part of his power in the original movie, that Mac KNEW he wasn't a Thing and the very force of his personality put you in a sympathetic position with him as a protagonist. Now here he is afraid of something that is counter to the very basis of him as a character. Another mistake on the part of the writer of this outing.

And speaking of middle fingers to the thinking part of the audience, check out these two panels of animals waltzing around waiting to get infected. 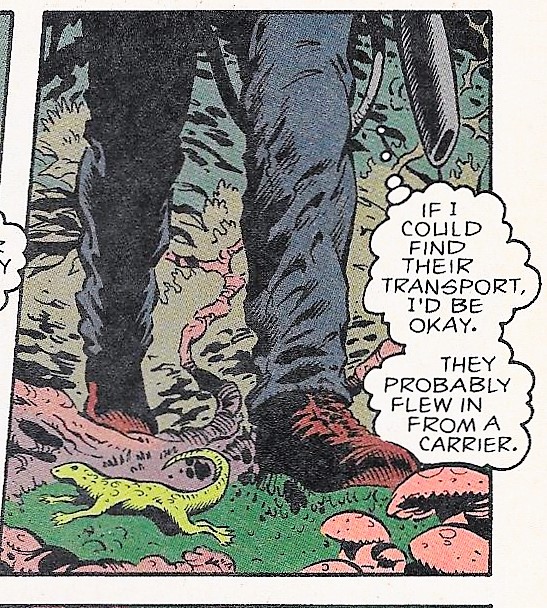 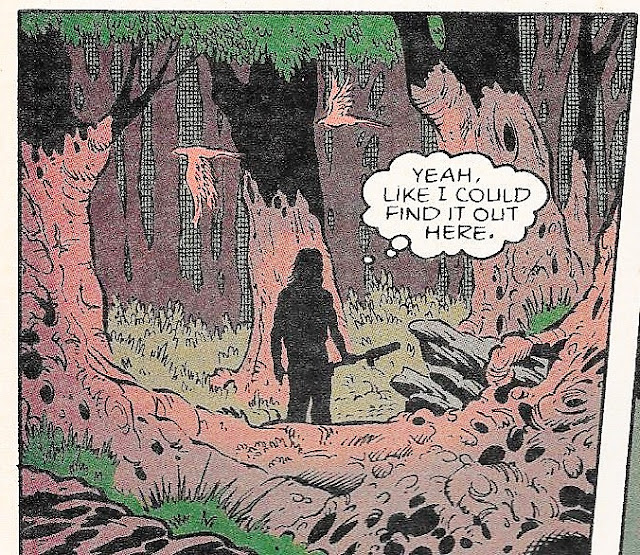 With the odds stacked so overwhelmingly against the good guys, I feel like the author doesn't get what made the original so tense.

The book tries hard to redeem itself with more of the same. More blood tests. More transformations. More….gore. Like this guy melting into a face pool… 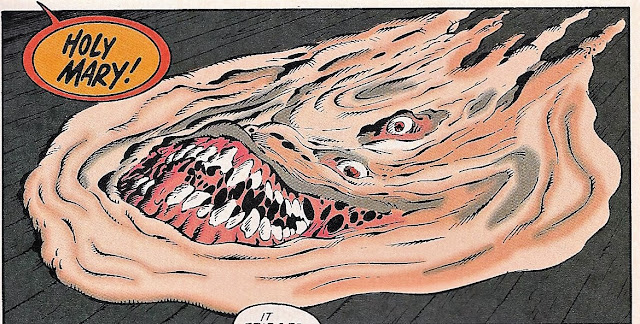 …and then tidalwaving another solider during a testing… 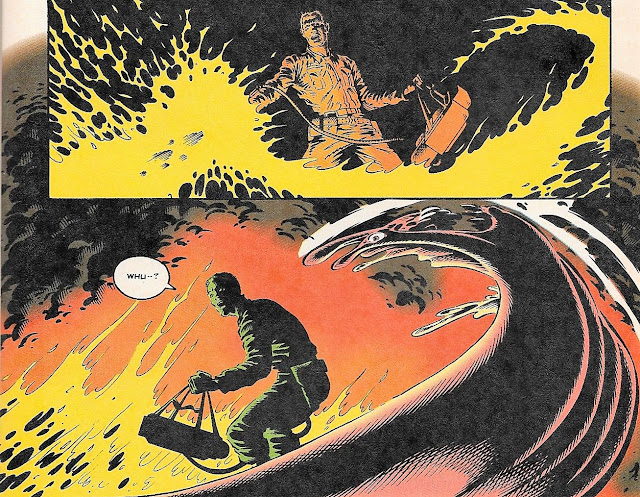 But honestly, if redoing the same scenes from the movie over and over again is all this has, can't we just stop now?

Apparently we can't. We suffer through more of MacReady worried he is a Thing, then the female Argentinean doctor worried about MacReady, then one of her fellow Argentinean team members running off to fight the Things armed with a machete…yeah, I don't know if he was really paying attention to what they've been fighting.

Mac finally comes back in an attempt to prove he's not a Thing and to expose the person who set him up. Turns out it's Childs, who transforms into this… 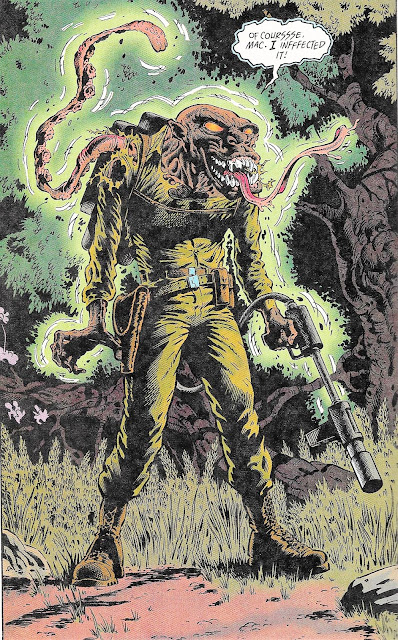 …instead of just blasting Mac with his flamethrower and ending the threat he poses forever.

I'm done. I'm just seriously disappointed in this, but why should I be. Sequels rarely live up to the original.

I must point out that these three follow up storylines went from average to bad to MUCH, Much worse. The next series, subtitled Eternal Vows, tells the story of a woman who finds herself turning into a thing because her fisherman fiancé ate a fish that was the remains of the Thing blown out of the sub hatch from the first comic book series and then has SEX with her. Yes, they went there and turned the Thing into an STD. And the story sounds almost sympathetic to her. She has regrets about absorbing people and doesn't want to take over the Earth. Uck! I'm certain I would not have made it through one issue of that crap.

Posted by SonOfCthulhu at 4:14 AM