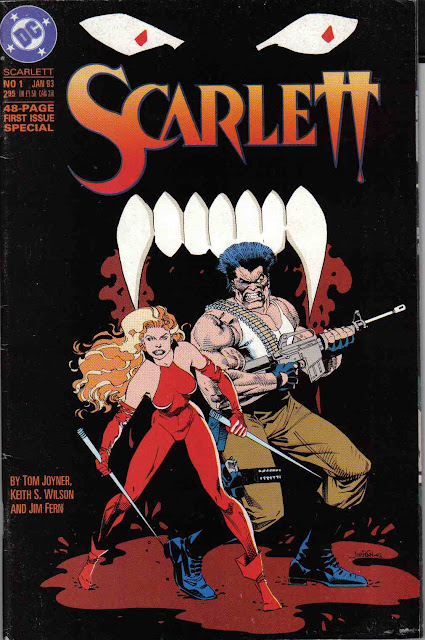 In 1992, Josh Whedon wrote the script for a movie that would turn the tables on the horror genre. Generally sick of seeing women portrayed in movies as victims, he crafted a novel approach to the vampire story by having a blonde girl act as the hero (or heroine), saving both herself and her entire high school. Thus was born “Buffy the Vampire Slayer”. However, Whedon’s original idea was a by-the-numbers horror tale with an empowered female heroine. What came out of director Fran Kuzui was a uneven comedy that left Whedon disenchanted. The “Buffy idea” languished for five years until it was miraculously resurrected as a TV pilot with Whedon as director.

During this lull, DC comics produced what can only be called the most blatant rip-off of a property in comic book form. In 1993, DC comics started an unlimited series called Scarlett and kicked it off with a 48-page first issue. Now I know that there is no proof that DC did this deliberately, but there are many details in this book that are either directly lifted from the movie or one-offs; details changed specifically so that it is different from the movie. The “created by” credits list Tom Joyner (co-plotter, script), Keith Wilson (co-plotter) and Jim Fern (penciller). Whedon’s name seems left off by accident.

The issue begins with a mysterious vampire cabal meeting in a secret location. Here are our four head vampires.

Wait a bit and the Buffy parallels will become apparent. For now we get to watch them feast on an associate who was unfaithful. They throw his body on a giant spike and drink the blood that collects in the bowl below it.

Next we drop in on Bly and her three best friends at a restaurant. Bly is a teenager, still in high school, popular and a cheerleader. Note also that her friends are pretty much stuck-up jerks. 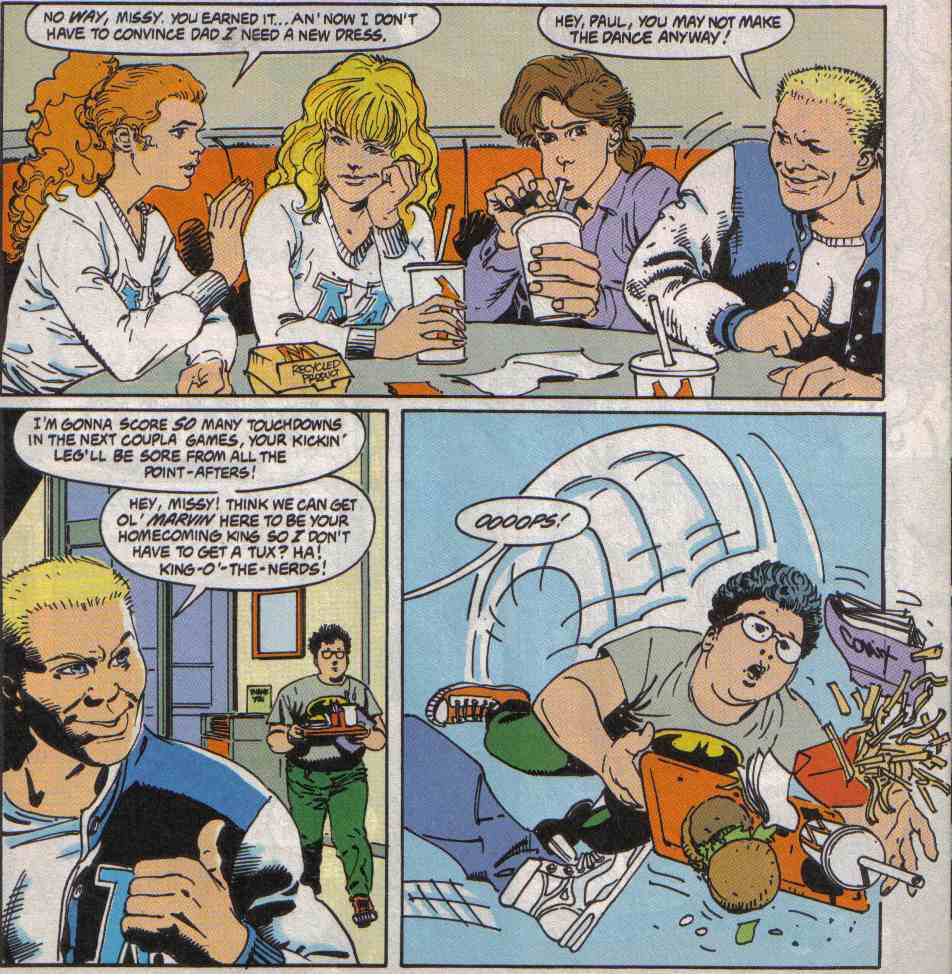 Hey! Marvin’s fries flew out of the panel into the real world. Now he’ll never get them back. Bly is really nice to Marvin and helps him up. Her boyfriend even berates the jock who tripped him. So maybe he isn't so bad. Unfortunately Bly is being stalked by a stranger in a trench coat and fedora carrying a silver-topped cane. Does he look like Donald Sutherland? And yes, this guy does end up being her trainer and protector.

But he doesn’t make himself known here. He and his Peter Lorre-like companion take Bly’s picture and then discuss her probability of being the slayer…er, sorry “The one”!


Even this Ramon character smacks of Buffy. He takes the place of the intentional comic relief that Paul Ruben’s Amilyn character provided, only in this setting he’s working on the side of the angels. Meanwhile a band of vampire bikers is working their way toward Bly. They get into a fracas with some locals who don’t like it that they have abducted their sisters. 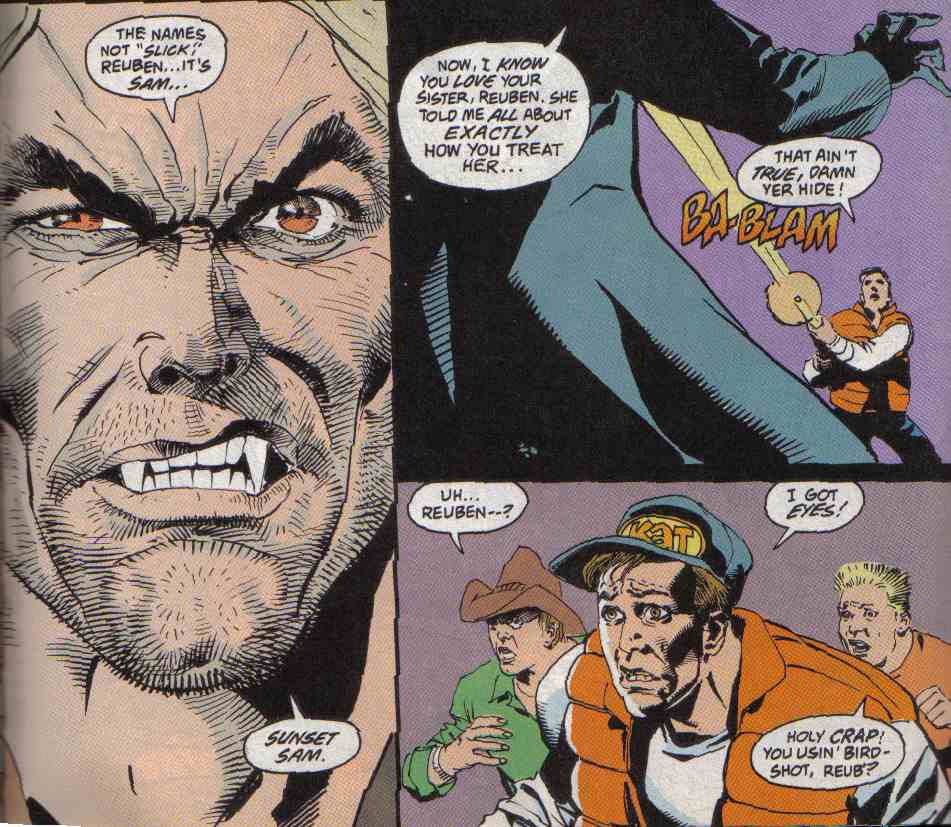 The vampires make short work of the good ole boys and then ride off, leaving two of their number to cover their tracks. Meanwhile Bly and her friends are at an after-game costume dance. Bly’s date Paul gets too sloshed and she has to drive him home. 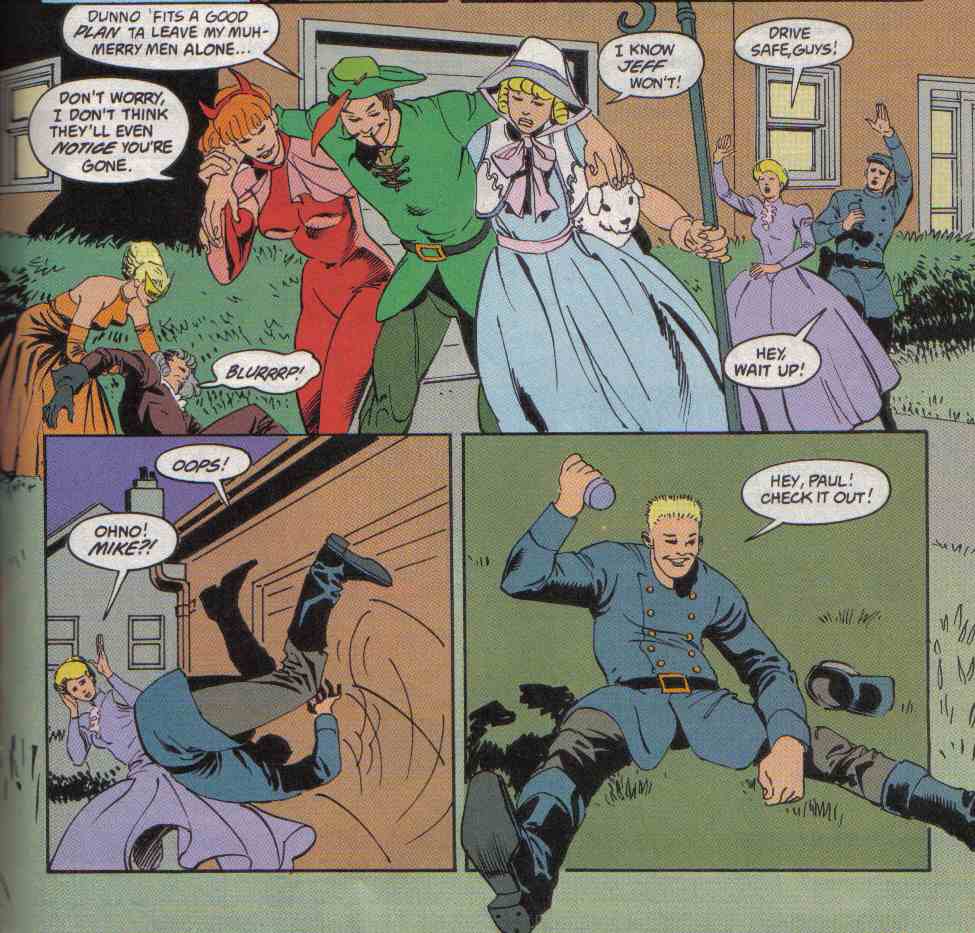 So Mike happens to be so drunk he's doing mid-air somersaults? Whatever. On the way home they are almost rundown by the vampire bikers. Bly’s house has been broken into, her parents killed and the words “For Sam Pigs Die Scarlett” written in blood all over her living room wall. Needless to say, Paul doesn’t score that night.

Meanwhile the vamps left to clean up the mess in the desert are beset by a crazy scar-faced psycho named Montero. Think of Montero as Blade except he’s a nutjob white guy instead of a cool-as-ice black guy. 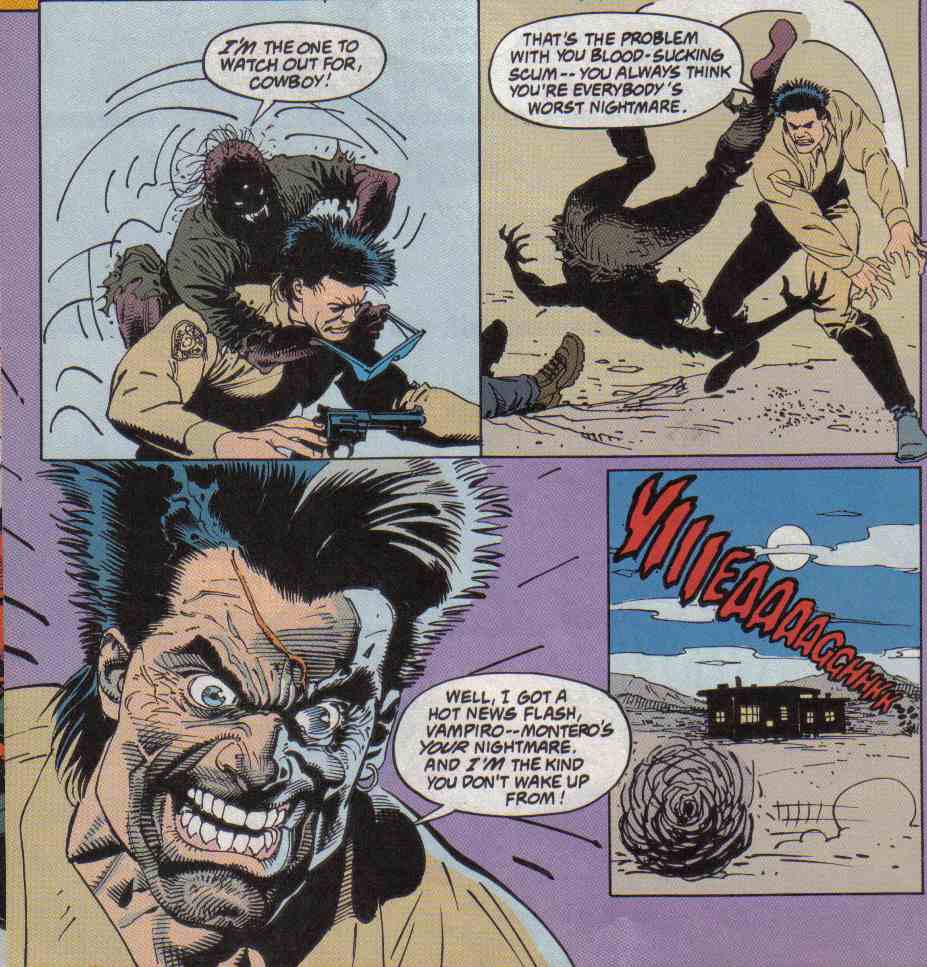 Now we skip ahead several hours to find Bly in a hospital being questioned by two detectives. Fat cowboy Ochoa and perky female Bellamy do their best to jog Bly’s memory of the events leading up to finding her parents dead. Seem’s Paul is missing now as well. Bly remembers back to buying her costume for the party earlier that day with her friend Emily. They bump into some of the punk dudes who Bly is on friendly terms with, especially Tim Sands. Tim could work out to be a stand-in for Luke Perry’s character here. He’s not popular and wears a leather jacket just like Pike. Also, Bly still likes him even though he’s an outcast/rebel.

She also bumps into our Donald Sutherland stand-in. 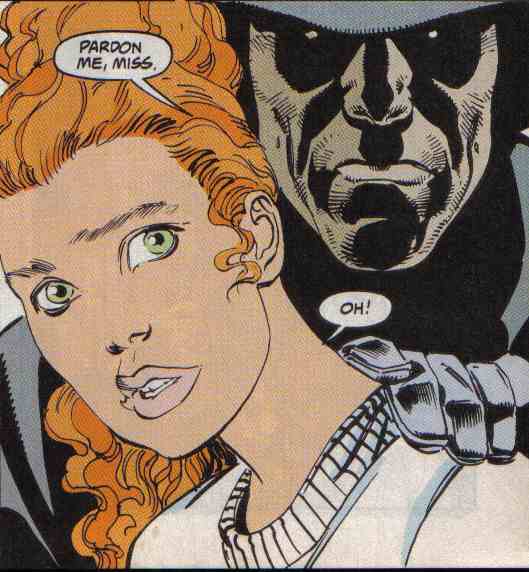 With the detectives pestering her, Bly remembers telling her parents about the guy from the mall. Her parents somehow know the guy as Kiras and appear to be hiding some rather pertinent info from Bly about why he’s here. The detectives insinuate that maybe she did something to her parents because she was adopted, which brings back Bly’s memory that they are dead. She fetal positions and they leave her alone.

Meanwhile two men in white outfits claiming to be FBI show up at the site of where Montero dispatched the two biker vampires. And while they drop hints to the local cops about how bad Montero is, Bly begins to dream back in town. She puts together what happened after she and Paul left her parent’s house. They were attacked by Sunset Sam and gang. Kiras appears with a sword to defend Bly. Sam blows up Raymon and injures Kiras. This gives the cops time to show up, and Sam rides away while the gang nabs Paul.

Does anyone else find it odd the way that Paul calling out to Bly and Kiras calling out to Raymon is juxtaposed here? Maybe they are trying to subtly suggest something. Paul appears in Bly’s hospital room and wakes her up. He drags her out past the sleeping security guard with the story that they think both of them have murdered her parents. She believes him but realizes too late that Paul in her dream was taken by the gang. As they round the final corner of the hospital garage, it is revealed that Paul has lead her right to Sunset Sam

Sorry for the long review, but this book is 48 pages with almost no ads. The story could be better, but it sure couldn’t be any longer. It’s not a great read, especially with the parallels to the Buffy movie that pop up every couple of pages. The odd thing will be seeing how this compares with the Buffy TV series and Blade movies as the book continues. Maybe turnabout was fair play, and they stole ideas right back from Scarlett.

Posted by SonOfCthulhu at 4:00 AM