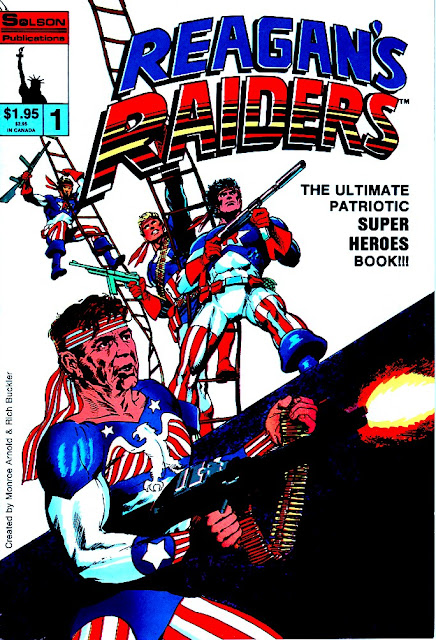 Stop rubbing your eyes in disbelief

Sol Brodsky is one of those little known, unsung heroes of the early days of Marvel Comics. Stan Lee described the late Mr. Brodsky as his “right-hand man for years.” Working behind the scenes as production manager (later as vice president of operations and then vice president of special projects), Sol contributed such things as helping co-create the logos for books such as The Amazing Spider-Man, inked some of Jack Kirby’s early work including Fantastic Four issues 3 and 4, and  even helped Steve Ditko ink and fill in backgrounds and secondary figures for Daredevil #1 when Bill Everett turned in the artwork late and incomplete. According to Lee “He could write, he could draw, he could ink – he could do everything.”

One of his other notable achievements was procreating children who were drawn to the comics industry just as he was. His daughter Janice Cohen worked for some time as a colorist at merry ole Marvel. And his son Gary…well, he decided to go into publishing comics.

Styled as Solson Publications (literally Sol’s Son), the short-lived 1980’s independent comic company boasted no less than Fantastic Four artist, cover artist extrodinaire and Deathlok co-creator Rich Buckler as its president. Producing off-kilter comics was the company staple. Just like many of the boom publishing houses of 80’s that tried to jump in to the black-and-white market, Solson failed to make much of a mark. Only one of its titles made it to issue four.

What did survive from the company’s short tenure is pure trashy crapbox comic book gold. With titles like Santeria: The Religion, Those Crazy Peckers, Daffy Qadaffi and Iron Maidens, you can tell right away that Solson’s wasn't aiming to tackle the big two head on.

As for the first issue of Reagan’s Raiders, it’s the brainchild of actor Monroe Arnold and penciler/editor Rich Buckler. The whole ball of wax is played as a parody of the Captain America setup with Reagan and his cabinet undergoing the super-solider treatment. While Reagan is rendered quite faithfully, most of the other cabinet members don’t get the same treatment, leading me to sometimes confuse George H. W. Bush’s character for George Shultz. Just in case you don’t remember all of Reagan’s cabinet (ha! Like I knew them before this book? Ha again!), here they are: 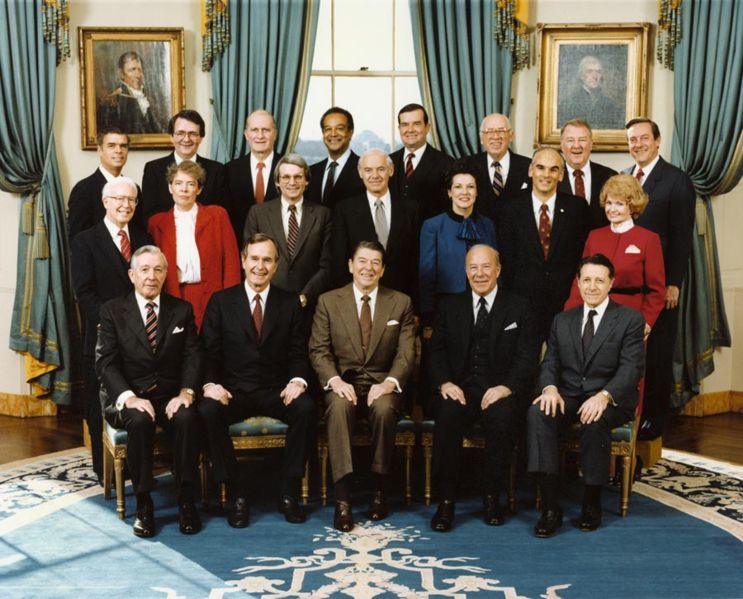 Not to spoil too much but Secretary of State George Shultz and Secretary of Defense Casper Weinberger get lots of page count and Secretary of Transportation Elizabeth Dole, U.S. Representative to the United Nations Jeane Kirkpatrick and Secretary of Health & Human Services Margaret Heckler don’t even appear. That’s kinda sexist of Ronnie to not give women equal screen time. Especially since 46% of them help get him elected. 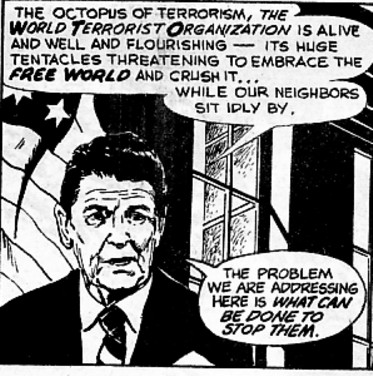 The book opens with Ron explaining the danger our country faces from the WTO. That’s World Terrorist Organization. GATT wouldn’t be changing its name to the World Trade Organization for another 14 years. Looks like our Commander-in-Chief is itching to get his hands dirty. Seems that he’s motivated by concerns his son’s been having. You know, “the one with all the talent” who called him just the other night to ask a very serious question.

The Achille Lauro being a ship that was hijacked by PLO terrorists the prior year. Guess Reagan is saying it’s now a permanent terrorist target since it got hit once. Guess Pearl Harbor is off-limits to military ships in this book too. Ron appears just a bit paranoid in this last panel. 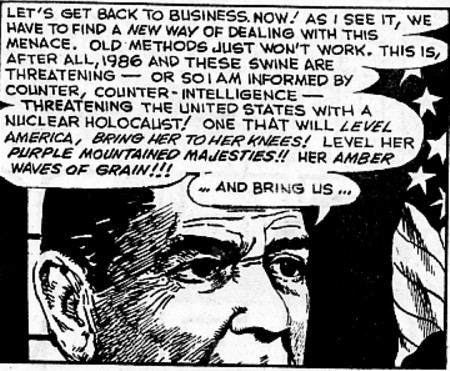 “…to the eve of destruction” is how he finishes that up. Note that this is all suppose to be so over-the-top that it makes the story a parody. It’s really odd to see terrorism taken lightly as a subject matter. In our post-9/11 world, terrorism is both a catchphrase and a genuine threat. Yet this book’s version of Ron definitely wouldn’t let a disaster of that magnitude happen. Which makes for an odd resonance in the material. How much fault does the President bear for events that cannot be easily foreseen? And the even bigger question: if there was a super-secret government project to make the President and his cabinet into super soldiers, would Dubbay have used it to prevent 9/11? And even more importantly: if he did, how would Condi look in a skin-tight spandex costume?

While you linger on those thoughts for a moment, let’s look in on our terrorists. 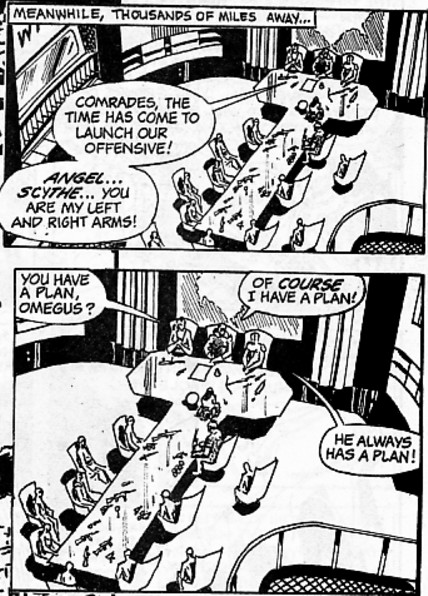 So this is Omegus’s merry little band of terrorists. I like how each member lays all their weapons out on the table in front themselves. Kind of sad about that guy at the head of the table who can’t afford a gun and has to settle for a crossbow-thingy.
Omegus looks like a poor-man’s Baron Zemo wearing the Mole Man’s glasses. Rich worked for Marvel for many years before this, so maybe some of that leaked into his character design. Here’s Omegus being all evil and stuff while explaining that the WTO is going to cause a meltdowns at three nuclear reactors in the northeastern part of the USA. 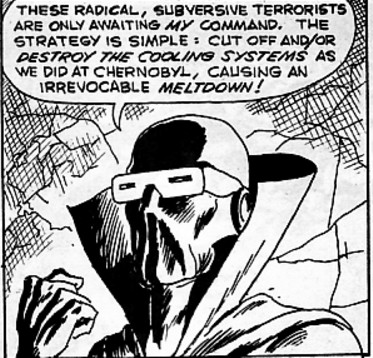 His partners don’t fare any better. Angel, the female terrorist, gets some leftover outfit from Wasp circa Avengers #1. Also skunk doos went out in like 1982. 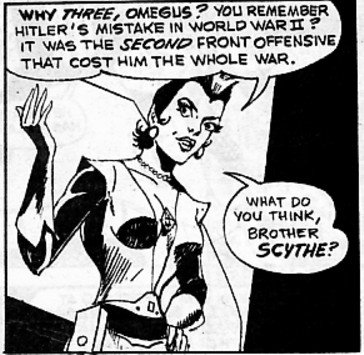 As for Scythe, he looks remarkably similar to Rich’s other creation, Deathlok. He’s even got the metal plate on the same side of his head. That’s just lazy character creation. 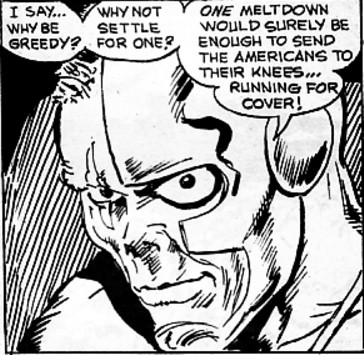 Back at the White House, Secretary of Defense Casper Weinberger has made a startling and important discovery:

Well, ok maybe not that startling or important. As a side note, who names their kid “Casper”? This newscast is THE straw that breaks the camel’s back as far as Ronnie is concerned. He’s all ready to deal with the perpetrators personally. Mind you, he’s 75 here. What’s he going to do? Tell them to get off his lawn? The very next day Reagan unveils a secret military project to his cabinet members. Seems Secretary of State George Shultz has a bit of a problem with what the Gipper has planned.

This must mean they aren’t taking Bush senior with them to get upgraded. He was the guy that got shot down in enemy combat, so no big loss there. Ron is all gung ho about the breakthrough they’ll be considering. They take a limo to a secret government train station. An army colonel warns the President that what they are about to see is so top secret that even after they’ve seen it, they haven’t seen it. If Reagan’s Alzheimer’s kicks in as expected, that shouldn’t be a problem. What is this project, you may ask? Just remember to forget what you see here. 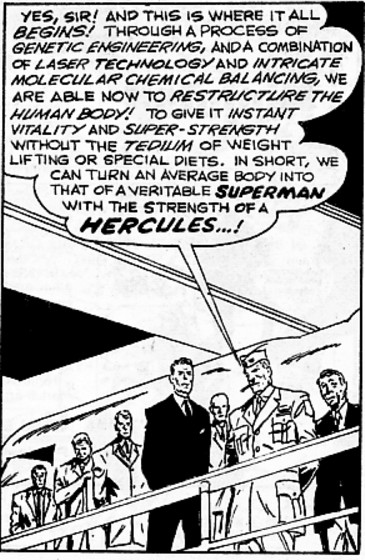 The younger men finally withered away and died. So Ronnie does what any geriatric man would do in the time before Viagra was created. 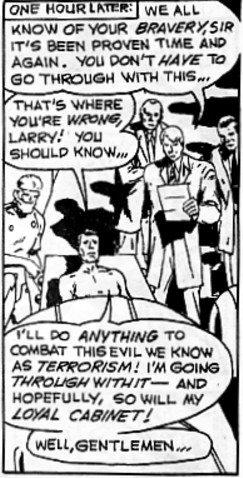 Yeah, terrorism. That’s why you want increased strength and virility. But what of Reagan’s cabinet?

All the boys sign on too. Some old friends even stop by to see them off. 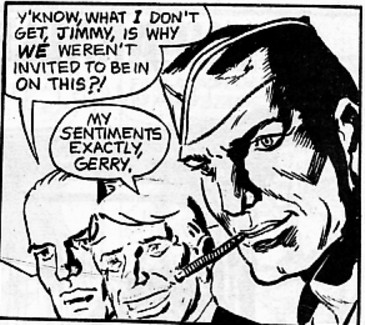 Of course nether of these Ex-Presidents could muster the courage to undertake this type of operation when they were in office. Note how concerned they are with the results of the procedure. 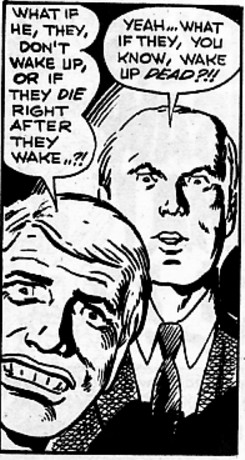 Never miss an opportunity to rag on Ford. Never! Meanwhile Scythe, our Deathlok-ripoff terrorist has found a spy in his organization.

Scythe dangles Mr. Needle off the top of a nearby dam. Just in the nick of time, a helicopter drops Reagan’s Raiders into the fray. Reagan looks true to form albeit a bit too “Rambo-esque”, but the rest of this crew has become generic-looking sparkly-spandex clad commandos. Also this is one of those panels that really show the hurried, non-professional style of the book. Like it’s trying real hard not to have any polish. 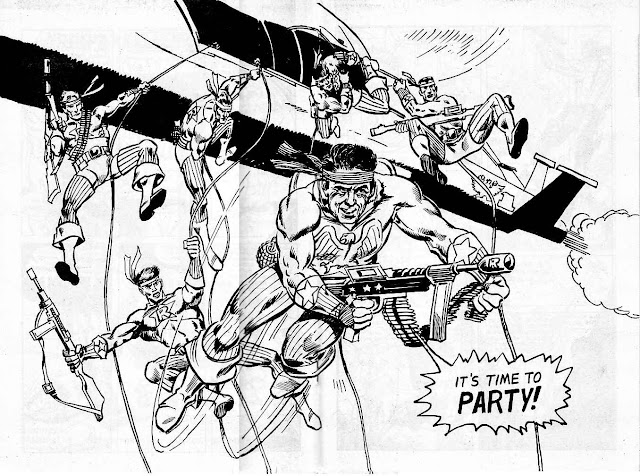 So flying jet-pack Reagan swoops in and saves the falling mole. He has to dash off quick, though as Scythe makes his getaway while sending in waves of his own shocktroopers. Our spy is quite beside himself, as anyone would be after being saved by a buff 75 year-old leader of the free world. All of the guys left as a rear guard action are quickly overcome by the Raiders and surrender. 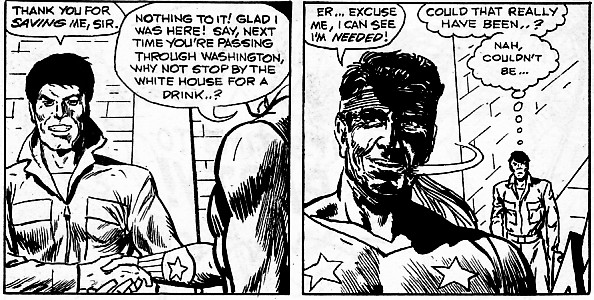 Guess Ronnie’s trying to switch tactics after Iran-Contra. I can see how he’d want to. Ron doesn’t stop their either. He makes a comment about “Here comes the Gipper” and then knocks Scythe down with a flying tackle. Scythe isn’t too impressed with by the President’s “Jack Lalanne” physique and proceeds to engage him in fisticuffs. He boasts that he’s about to rewrite history. Ronnie cleans his clock.
Scythe ends up melted down into a pile of slag. The President then learns from Needle of the threats on the other two nuclear power plants and off his team goes to stop them. Angel is the operative there and she’s already broken into the reactor control room and shut down the cooling systems. Her two backup terrorists are concerned when she mentions that they will all “die gloriously for the cause!” 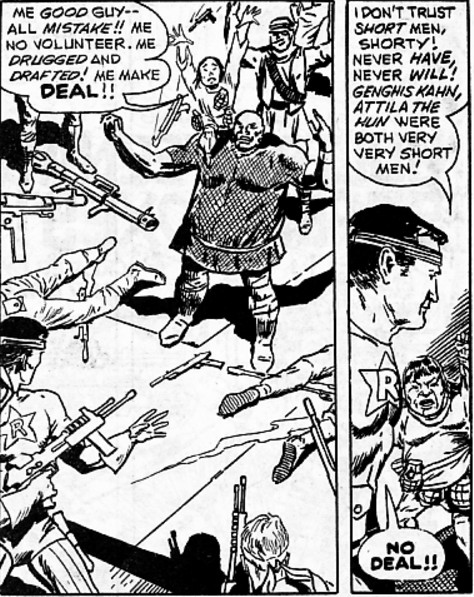 It’s moments like these that again point out how our attitudes about terrorism have changed since 9/11. In 1986 it was hard to conceive of a group of people so fanaticized and disenfranchised from the power structure that they would believe that only a suicidal course of action could achieve their needs. The terrorists are shown to be rational people and their leaders are the crazy fanatics who will lay down their lives to achieve their goals. As we’ve seen now, the roles work so much better in reverse. “Rational” leaders whose motivation is power and self interest directing groups of extremists willing to lay down their lives for “the cause”. How innocent we were back then.

The two followers end up sabotaging Angel’s defense against the Raiders and cause her to be vaporized by her own short circuiting power source. That leaves only Omegus’s try at a power plant left to stop. The lead villain tries dropping a bomb from his helicopter to destroy the plant, but Ron and George get there first. 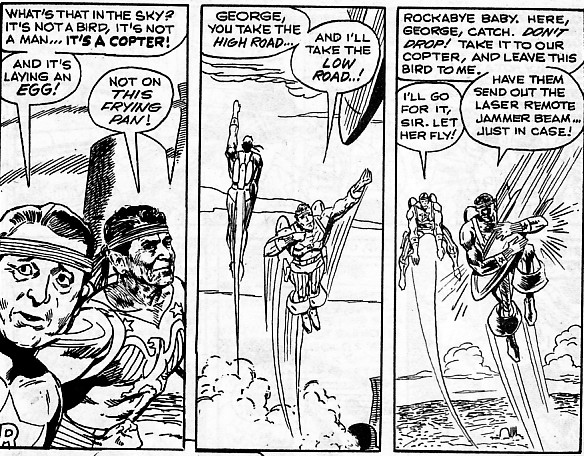 Reagan then disables Omegus’s main rotor and smashes him into the ground.

As the group reconvenes in the Oval Office, there’s some wonder as to what they will do next. 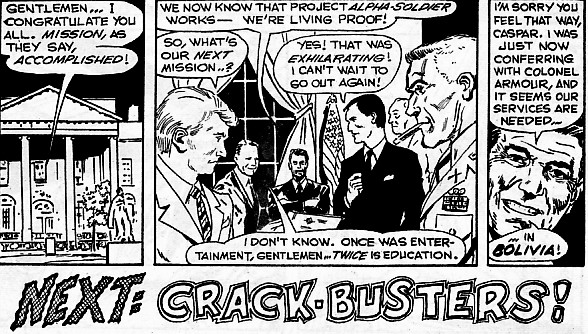 So it looks like Reagan is going to take that “War on Drugs” thing seriously. Reagan’s Raiders got a scant 3 issues in print. It’s unknown if the series was cancelled or if it was a victim of Solson Publishing’s demise. Oddly I’d like to see more issues of it, since there was so much more potential for the “cast” of cabinet members to shine. Now we’ll never know how much ass a superpowered Donald Regan or Elizabeth Dole could kick.
Posted by SonOfCthulhu at 3:12 AM