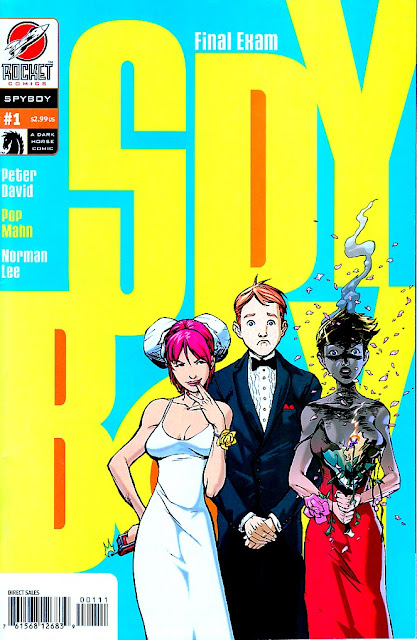 It’s like an Archie book, only with more terrorist bombings

Peter David is one of my favorite writers. There, I said it. You can bash me for favoritism all you want now.

I first encountered David’s stuff back when he was doing The Incredible Hulk. I was a big John Byrne fan and Peter came on board several issues after Byrne left the book. His story coupled with Todd McFarland’s art were like sweet, sweet ambrosia. I was hooked from the first issue I picked up and continued reading Hulk even after McFarland’s departure.

Around the same time, I became a fan of his Star Trek: The Next Generation books. I hadn’t lasted long watching the first season of the actual TV show. By about the fourth or fifth episode, I bailed on it. The cast hadn’t gelled and I wrongly assumed it was headed to the dustbin of history. I couldn’t have been more wrong. The second season took off and tie-ins for the series were everywhere. I was recently married and out of college, working nights at a job that didn’t require much more than for me to show up. I had tons of time to kill so I started reading some of the ST:TNG novelizations. Biggest mistake I ever made was to start with Book 1, Diane Carey’s horrendous Ghost Ship. The book was written around the same time as the first season and none of the characters had very defined personalities. The book also seemed to be padded with a bunch of filler action scenes instead of a real story. I remember that it seemed to be a series of Troy having psychic fits and Riker rushing her back to her cabin from the bridge every couple of pages. It was bad. Almost bad enough to completely turn me off ST:TNG for a second time.

Then I found Peter David’s A Rock and A Hard Place. I remember thinking that I liked David’s comics, maybe I should give this one a try. I am so glad I did. His Officer Stone is still one of my favorite non-canonical characters. The book was a very enjoyable read which hooked me on all things Star Trek made by David. His recent New Frontier series is the most enjoyable popcorn fiction around. Its unique flavor would make a much better starting place for movies or TV series rather than dwelling on the past of the Star Trek universe.

After David left the Hulk series, he dabbled around in quite a few endeavors. One of which was an ongoing series for Dark Horse call Spy Boy. It proved popular enough to garner a follow up mini, the four issue SpyBoy: Final Exam. The series follows a teenage superspy and his pals as they defeat evil and have romantic entanglements typical of teenage secret agents.

It’s also a bunch of fun, even if it occasionally strays into areas that could be played dark. Take the opening scene in this book. A terrorist is holding a sniper rifle out a window overlooking the giant Times Square ball. As the clock ticks down to midnight, the sniper takes three shots at an unknown target.
Luckily, Spy Boy is way ahead of this turkey and using some kind of “Q branch” high-tech device, catches all three bullets. Then while standing on the side of the building he trades quips with our mystery sniper. 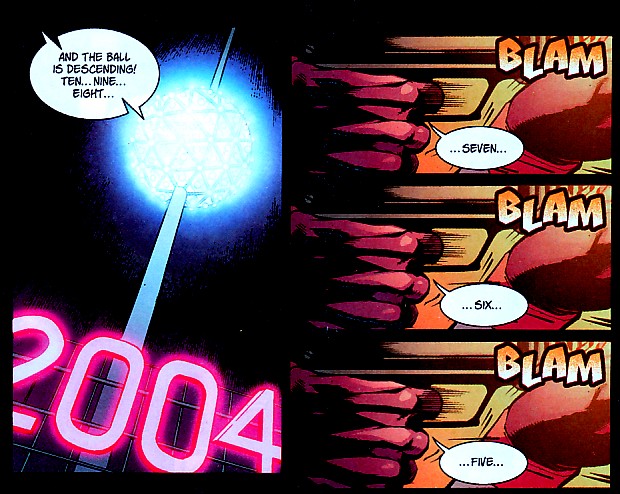 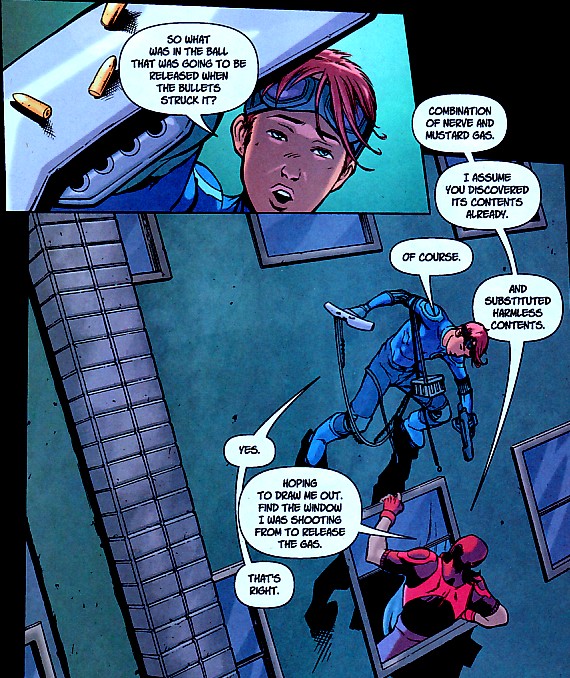 So Spy Boy just saved countless thousands of drunken New Yorkers from having a very bad start to 2004. The villain trades a few punches with our Boy and then catches him off-guard with some poison gas. While he’s still disoriented, the sharp shooter twirls his mustache a bit and announces his handle then kicks Spy Boy out the window. 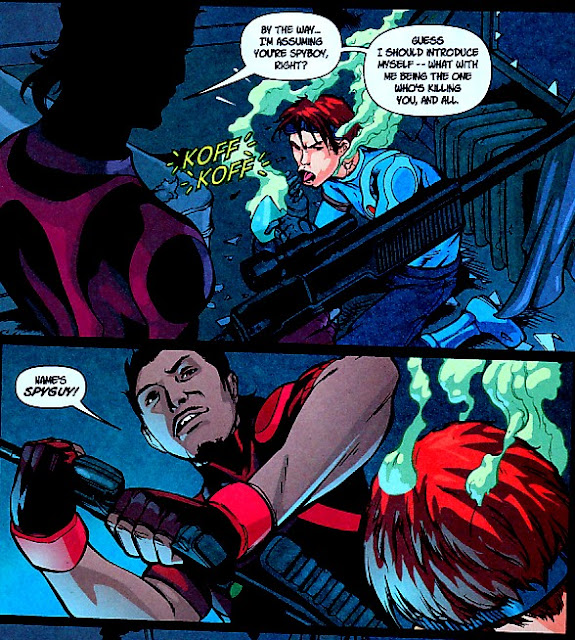 Spy Guy, huh? Did I mention there was a 17 issue series before this one? I don’t have any inkling what it contained, but I’m imagining a whole rogues gallery of bad guys with names like “Spy Man”, “Spy Dude”, “Spy Chap”, “Spy Fellow” and “Spy Person”. Spy Boy is saved from plummeting to his death by the fortuitous arrival of Spy Girl (okay, this is getting a bit out of hand now). He appears none to happy about the save either. 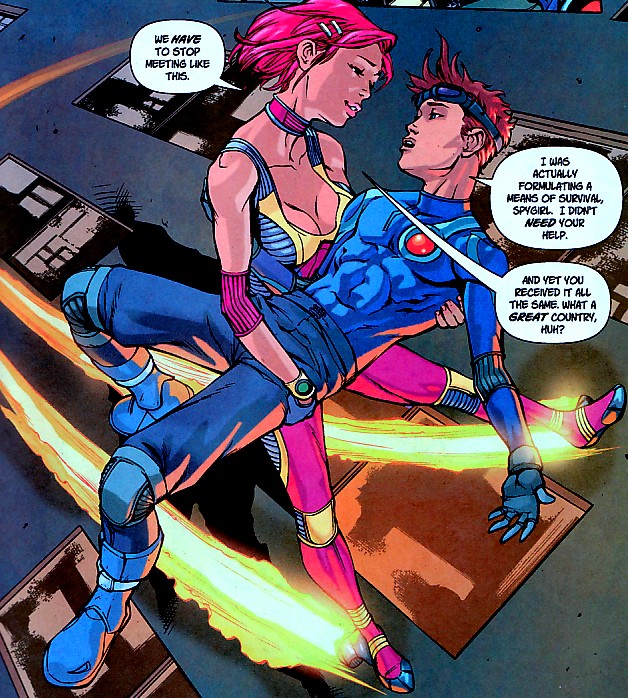 Our bad guy (heh, sorry) is making his escape about now, when he finds a model of the New Year’s Eve ball hanging from a string outside his hotel room door. As he touches it, it starts ticking and he realizes he’s made a mistake. The ball is a bomb that blows up the entire floor, although our bad guy easily escapes. The person who set this trap is on Spy Boy’s team, a young lady by the name of … (wait for it.) 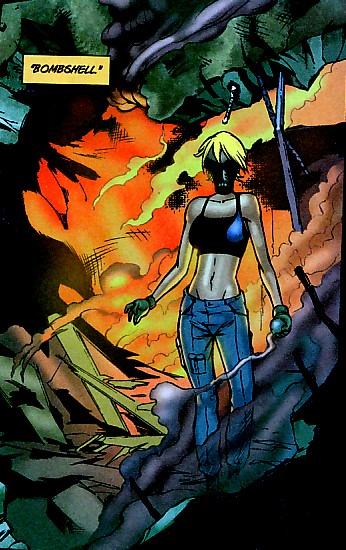 Bombshell. Who uses bombs while also being a hot blonde chick. By now you are either in or out with the book. Here we have whole buildings being razed to take out one lone terrorist, plots to gas crowds of unsuspecting people, and everyone has a cutesy handle. If you want post-9/11 seriousness, look elsewhere.

Also I have to mention that Pop Mahu does some incredible things with the art in this book. He’s clean like Mark Bright or Paul Ryan, with distinctive facial expressions and body language. He even dips into manga style a couple of times, but they are so well blended in with the regular art and the pacing of the panels fit so well that I hardly noticed. That’s pretty high praise since manga occurrences in many titles jar me right out of the story. Mark me down as impressed.

Someone in the story who’s not impressed is Spy Guy’s boss, Main Man. Seems Spy G’s failure isn’t going to go over very well with The Echelon, the baddie behind the Time’s Square bomb. Not to worry, Main Man has a backup assignment for SG. And it involves going after Spy Boy while he’s in his civilian identity.

And just what is Spy Boy’s secret identity like? Apparently he’s just like every other middle America high school student. Except they don’t have to save the world while trying to maintain a social life. Let’s take a peek in on Alex a/k/a Spy Boy. 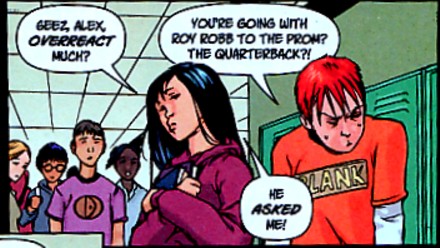 This is Alex’s crush. I’ll be completely honest here, I don’t have a clue as to her name. She’s in and out within the span of two pages. Alex is heartbroken over missing his chance to take her to the prom. And he can’t even explain his double life to her. She even rubs that in his face (with a quip about him being “Batman”) and tells him she waited for him to ask, but he took too long. Poor Alex, he moves on to ask Spy Girl a/k/a Yukio to go with him. She misunderstands, thinking it’s some kind of secret agent mission. So he lets her know in no uncertain terms. 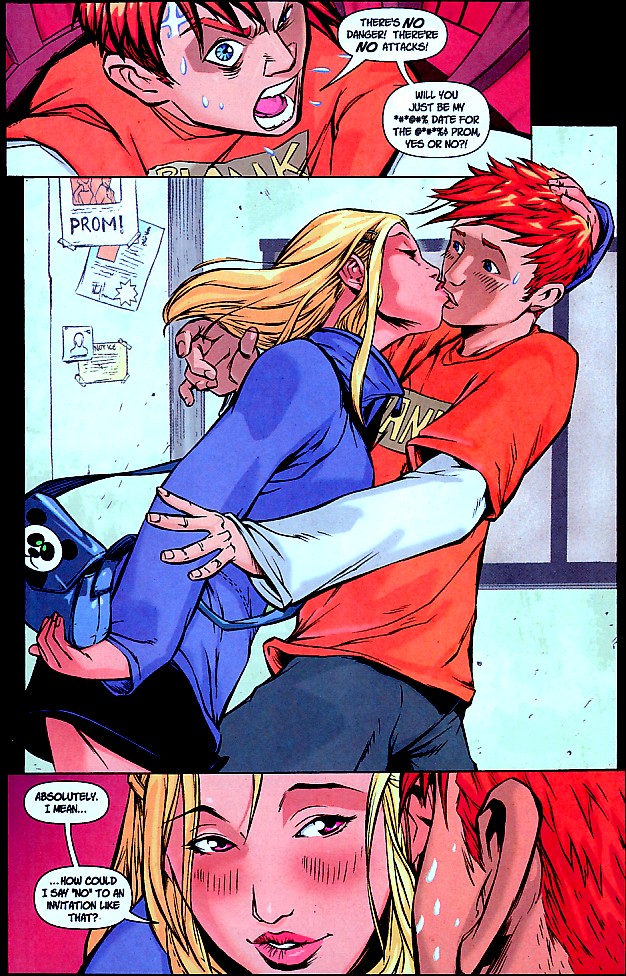 I had a lot of problems with the hair color here. Spy Girl is a blonde in her secret identity and a red (or pink) haired chick when out saving the world. When we see Bombshell next, she’s a brunette where clearly she was a blonde in the first adventure that started off the book. Bombshell a/k/a Marta is talking with Butch on the baseball field about Yukio getting asked to the prom by Alex. Marta is very matter of fact that she’s only there to protect Alex, but Butch digs into about her obvious jealously. Notice how the book has totally shifted into “Betty and Veronica” mode? 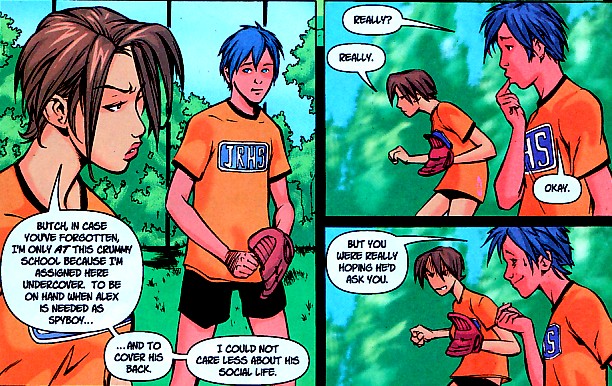 Butch is comic relief and adds a human element to the stories. Think of him as Jughead. And just for good measure, he gets clocked by a line drive here and is shown bleeding profusely from a head wound. Never fear, Marta is here. 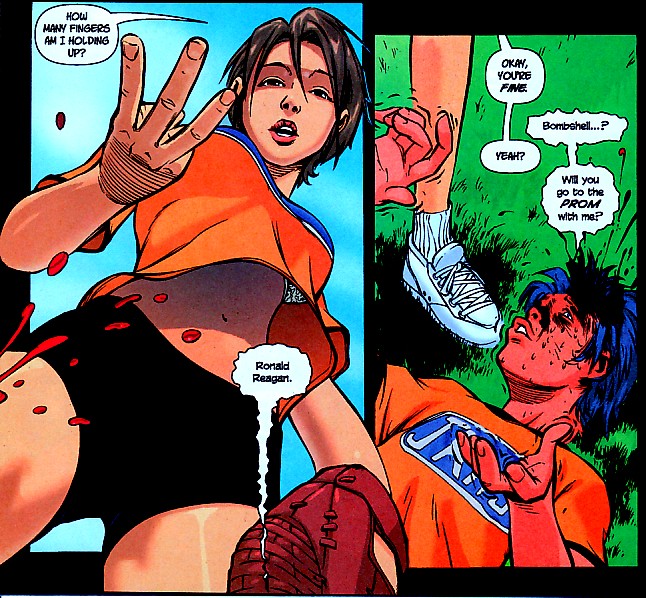 Nice upshirt there. These are suppose to be teenagers, right? I feel dirty posting that. Needless to say our four-way romance just picked up a fifth side here. The last bit of the book has a new teacher coming in to sub in Alex’s class room. I guess you could compare him to Miss Grundy.

That is, if Miss Grundy was secretly a dangerous psychopathic killer and terrorist. Okay, so maybe it’s not all that different from the Archie comics.