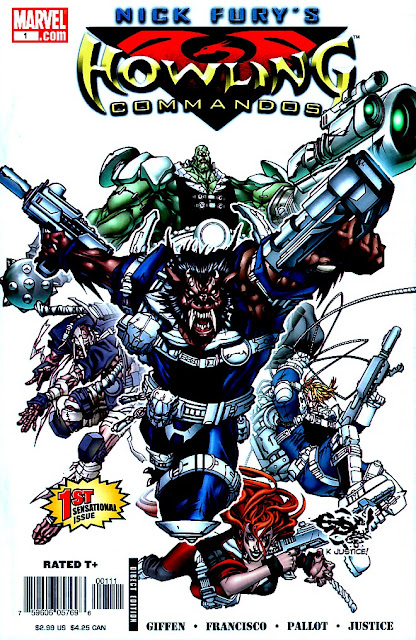 A part of my childhood died while looking at this cover

Before jumping into this "awesome" review, why not give Professor Alan's "Quarter Bin" podcast of the same issue a spin over at Relatively Geeky Network. It's really worth a spin!

Sgt. Fury and his Howling Commandos by Lee and Kirby debuted in May of 1963. Sales of the WW II combat series quickly took off, guided first by Lee and Kirby and followed after by Roy Thomas, Gary Friedrich and Dick Ayers. Original stories lasted for 120 issues and Marvel sold enough comics using reprinted material to keep printing the mag even after that. It finally tapped out after 167 issues. The character Nick Fury went on to become a Bond-like super-spy, taking a few of his Howling Commandos to work with him through his tenure as an agent of and finally director of S.H.I.E.L.D. The original commandos were some of the first diverse ethnical and racial characters, concepts that gave them broad fanbase appeal.


In December 2005, Marvel decided to relaunch the Howling Commandoes book using a page from DC’s “Scare Tactics” comic. Interpreting the name literally, Marvel created a team book about monsters that work for a super-secret division of S.H.I.E.L.D. doing missions so secret that S.H.I.E.L.D. itself doesn’t know about them. Werewolves, mummies, vampires and the undead as S.H.I.E.L.D. agents seems a bit of a desperate stretch at first. Then you realize that this is the same Marvel that in a few months would take the decades-old phrase for their own company-loyal fanboys ("Marvel Zombies") and turn it into a license to print money (and many miniseries) in issue 23 of Ultimate Fantastic Four. Howling Commandoes wouldn’t be so lucky.


Keith Giffen was tapped as writer and art chores went to Eduardo Francisco, an apparent newcomer. The funny in this book is a bit strained, the action a bit stilted, but it’s the art that really kills it. Francisco makes three of the characters a bit too similar in the action scenes, meaning we have to use the dialogue to tell if it’s Frankenstein, the mummy or the zombie-guy. His humans take a hit too, as they get so many heavy detail lines that they become indistinguishable from the monsters. Take a check at our bad guys here, who are all suppose to be normal humans. 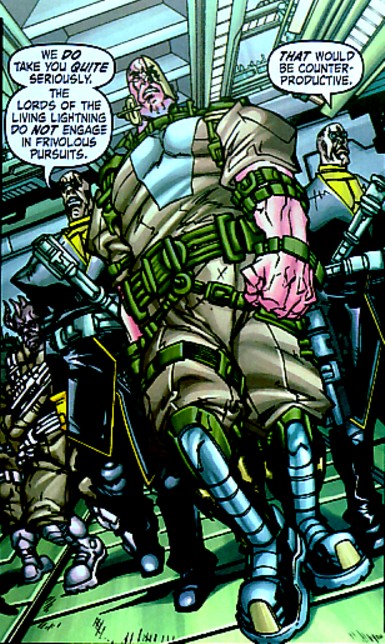 Nasty! These guys are members of a group called The Lords of Living Lightning who are supplying our super-super-secret evil organization with technology to infiltrate computers ranging from S.H.I.E.L.D.’s mega-secure systems to your iPod. Now you know why when you hit random, all you get is Rod Stewart and Meatloaf for the first 20 song selections. Even though they are human through and through, Francisco gives them more crags than Mount Everest. His heavy hand ends up making them look all pitted and veiny. Our “good” guys are going to Monster Mash all over these dudes in the next few pages, but I’m going to skip to the end and give you particulars on each of our featured creatures. This is necessary because when the fur starts flying, you can’t tell one from another. 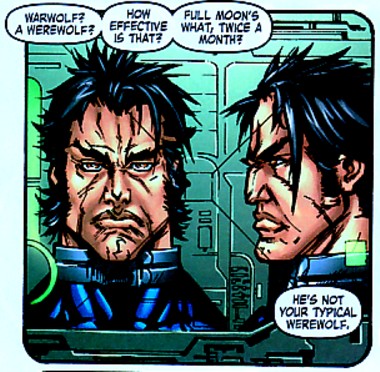 First up is our werewolf, Vince Marcus. His code name is Warwolf and if you think that’s stupid you’d be right. Marcus can voluntarily transform whenever Mars is in the night sky. I get the Mars = God of War = Warwolf connection they are going for here, but that doesn’t make the name sound any less silly. Marcus is the field leader right behind our old friend Clay Quartermain (who spends the whole issue wishing he was in some other book altogether. I think he’s mad about the art.) 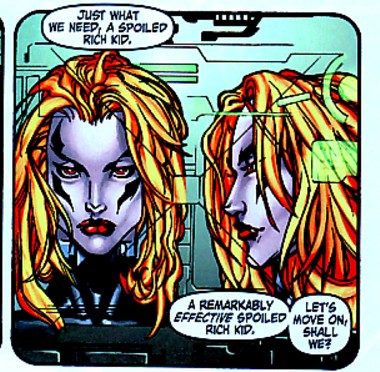 Next up is our token hot chick, Nina Price. Nina happens to be half-vampire and half-werewolf. I’ve read Nina’s history on wiki and it’s so convoluted that I won’t even try to go into it here. Something about her descending from someone who was bitten by a werewolf that served Dracula so the whole family became full moon furballs, but her Mom broke that curse so Nina was human until she was attacked by a vampire which lead to her present state as half of both monsters. I’m not sure what the writers/editors at Marvel were drinking at the time of her creation, but I’m betting you can’t serve it to minors. Nina calls herself “Vampire by Night”, which is perhaps the stupidest thing ever. A “Vampire by Day” would be a pile of ashes. She claims the title because she is the niece of Jack Russell a/k/a the “Werewolf by Night”. 100 proof stuff they were sipping, I’m telling you. 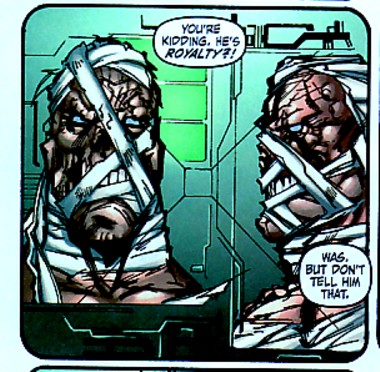 Next up is N’Kantu, the Living Mummy, an African warrior-prince who was captured by Egyptians and mummified. Since he died, N’Kantu has gotten to rub elbows with Ulysses Bloodstone, the Grandmaster, The Thing and Captain America. I’m not sure how “royal” he is, but based on his prior company surely even he must see hanging out with these guys as slumming. 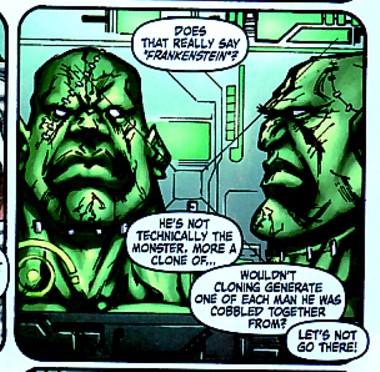 And they never explain it. Heh. Science! Useful as a plot device until we run smack dab into reality. "Let's not go there" indeed. 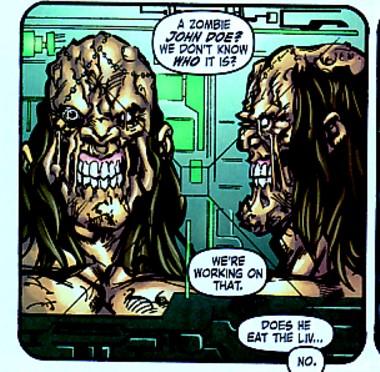 John Doe is our resident zombie dude. A running joke in the series is that he’s not the fleshing eating kind, but keeps getting mistaken for one of Romero’s boys. 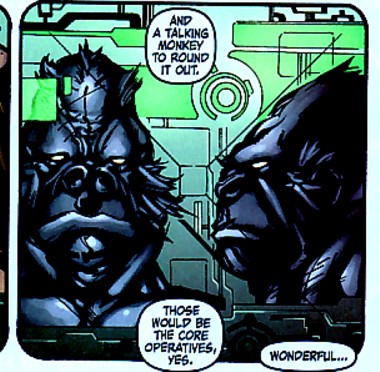 Lastly we have Gorilla-Man, Kenneth Hale. Kenneth became a man-ape when he slew the prior Gorilla-Man in a quest to become immortal. He got the immortality and the Kong suit to go with it. After this series, he signs on to the MUCH BETTER Agents of Atlas book.


So now that we’ve met our troopers, we can skip back to them in action. Here’s a sample couple o’ three panels of them kicking the butt. 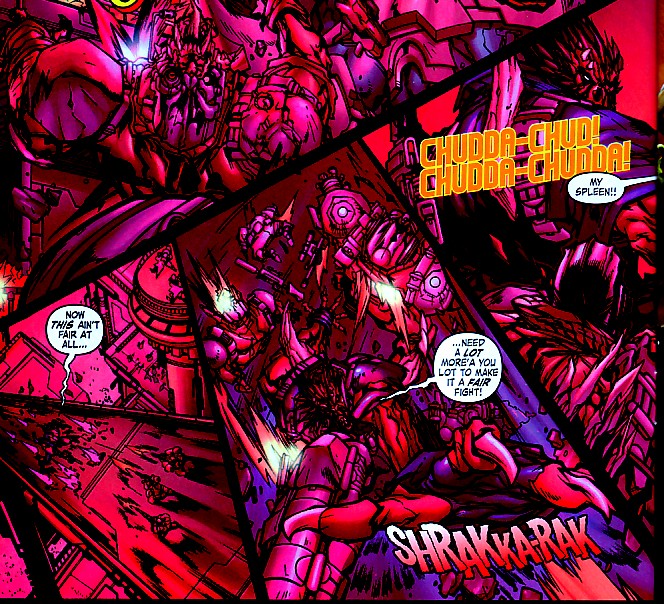 Gaaah. That colorist needs to stop wiping his cotton candy hands all over the finished art. Not only are the battle scenes far too rosy, note that you can’t really tell a horrible monster good-guy from a badly depicted horrible human bad guy. That guy in the top-left corner? He’s a human. Funny that I meet so few people with fangs these days. The art being so bad does distract us from Giffen not delivering with the goods here and else where. I groaned at the “My spleen!” line instead of laughing.


The monster squad wins (of course) and leaves for their base in their dustoff vehicle which happens to be a giant cyber-dragon. I thought that kind of rocked, especially because the passenger door is right inside the gaping maw of the beast. 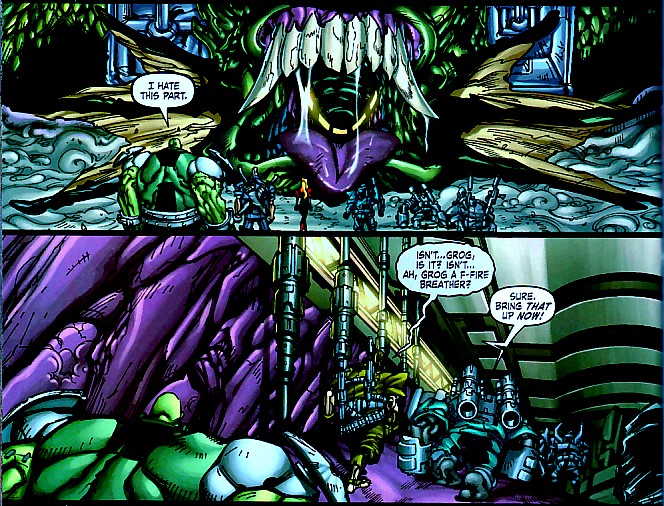 Nice! That is a really great couple of shots. However, just when I find something to like about the book, they bring in Clay Quatermain. 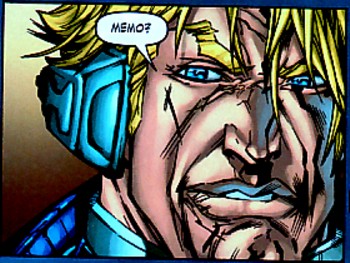 Oh, my God! What happened to Clay’s face? Did he get burned by acid or something? Why does he have eyebrows made out of yellow construction paper? He looks all puffy. At this point, I thought “well the art can’t get any worse.” I was almost right.

Nick Fury makes his one and only cameo in the book that would bear his name for six full issues. And I’m sure he’d rather have faced down a room full of Hydra agents while armed with only a butter knife than to be drawn by Francisco again. Not only is Nick’s face melting, it appears that he is also wearing one of those outfits with the “shoulder pads” that were so popular with all the ladies in the 80’s. Yeah, the art is so bad it makes Nick Fury, the most macho of guys look like a pansy-boy extra from a Thriller video shoot who also happens to be about 103 years old.


Bad art and lame jokes didn’t pay off here. Have they ever really? NFHCs lasted half a year before being ghostbusted.

Posted by SonOfCthulhu at 8:15 PM