The Gate: The Dark Inside #1

The Gate: The Dark Inside #1 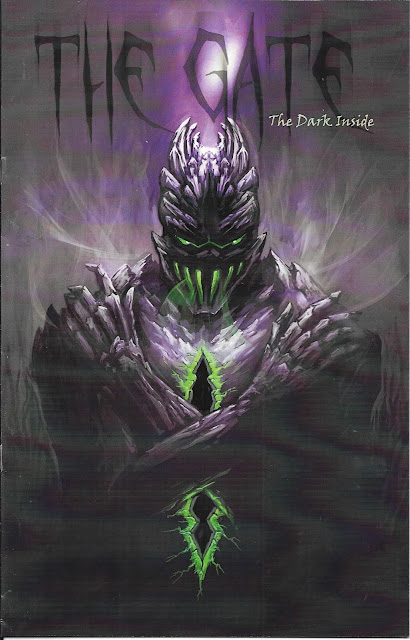 We should start this all off with what The Gate is and isn’t.

First off what is it? Well, it’s a “superhero horror” comic book concept that writer Kevin Huckabee wanted desperately to turn into a movie or streaming series. The Gate is, in the context of the story, a demon of some type that inhabits a human host body and makes them “become” The Gate. The Gate is a ripoff of two better ideas: the Guyver, a Japanese manga/anime/America B-movie about a suit of living armor that merges with a human and is partially controlled by it but gives him a demonic aspect AND Spawn, about a guy who dies and becomes part devil. The Gate is also the world’s best garbage disposal unit, with anything being shoved into that chest cavity disappearing forever. The Gate is also a 260 page prose novel by Huckabee put out two years after this single issue.

What The Gate isn’t is any damn good.

The art has a few pages that look decent and then others that look like someone colored Rabid Rachel. And we don’t stop with just bad artwork. The plot tries to do so much at once that you are constantly ping-ponged between present day story and a protracted, convoluted history of The Gate demon, WHILE ALSO BEING A FLASHBACK STARTED ON PAGE ONE! It is a maddening, chaotic mess with every page turn being a chance to throw you off track from what you just read.

We begin in prison with this hoodied fella being grinned at by the hobo across from him in the cell. I guess hoodie guy is named Jimmy Wilson and his dad is here to bail him out. Literally. 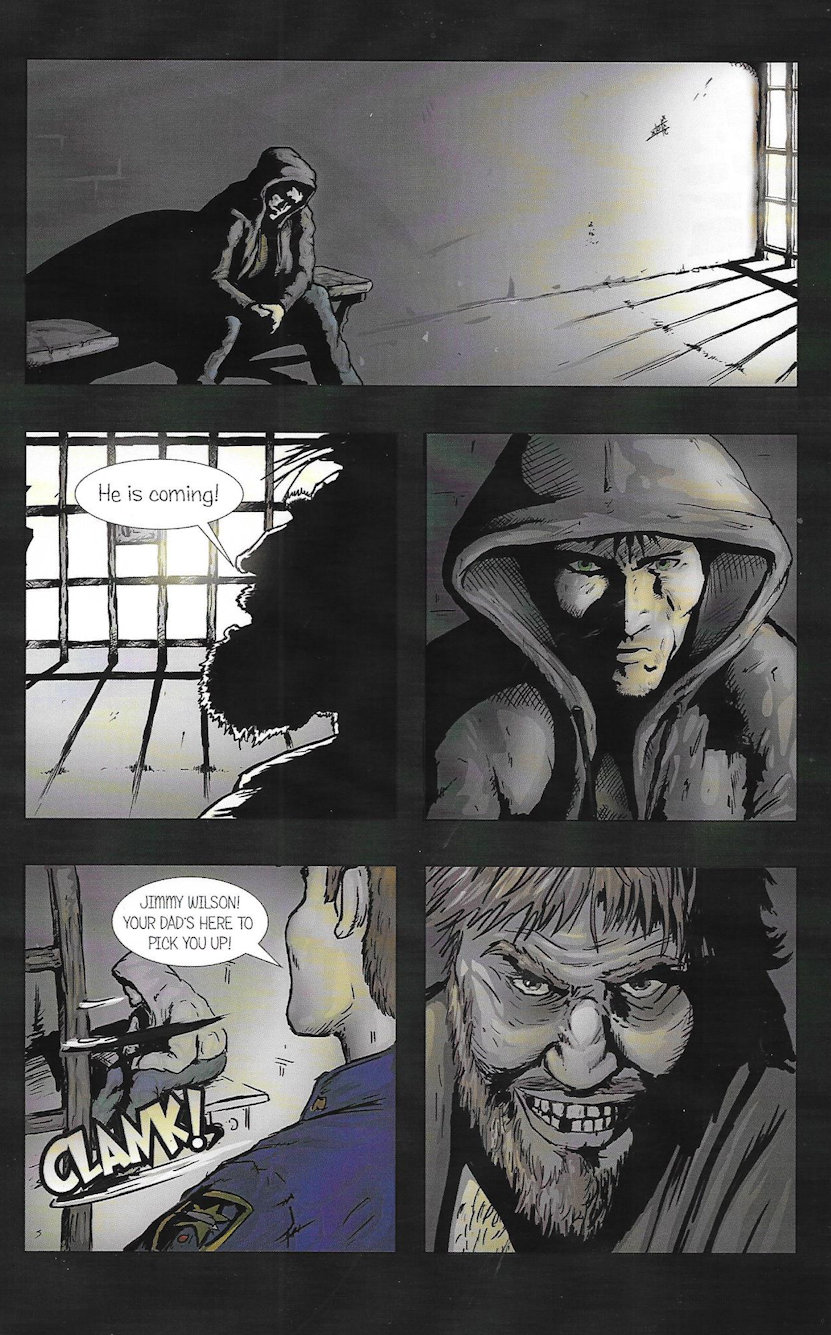 Turn the page and we are at “Earlier that day…” when Jimmy and his girlfriend Lauren are found out while stealing beers from a convenience store. Notice the pose and angle on the “Ding” panel. That’s Rabid Rachel territory right there. The odd pose, the weird perspective, the way it makes my eyes hurt….yep, this one is going to leave a bad taste in my mouth. 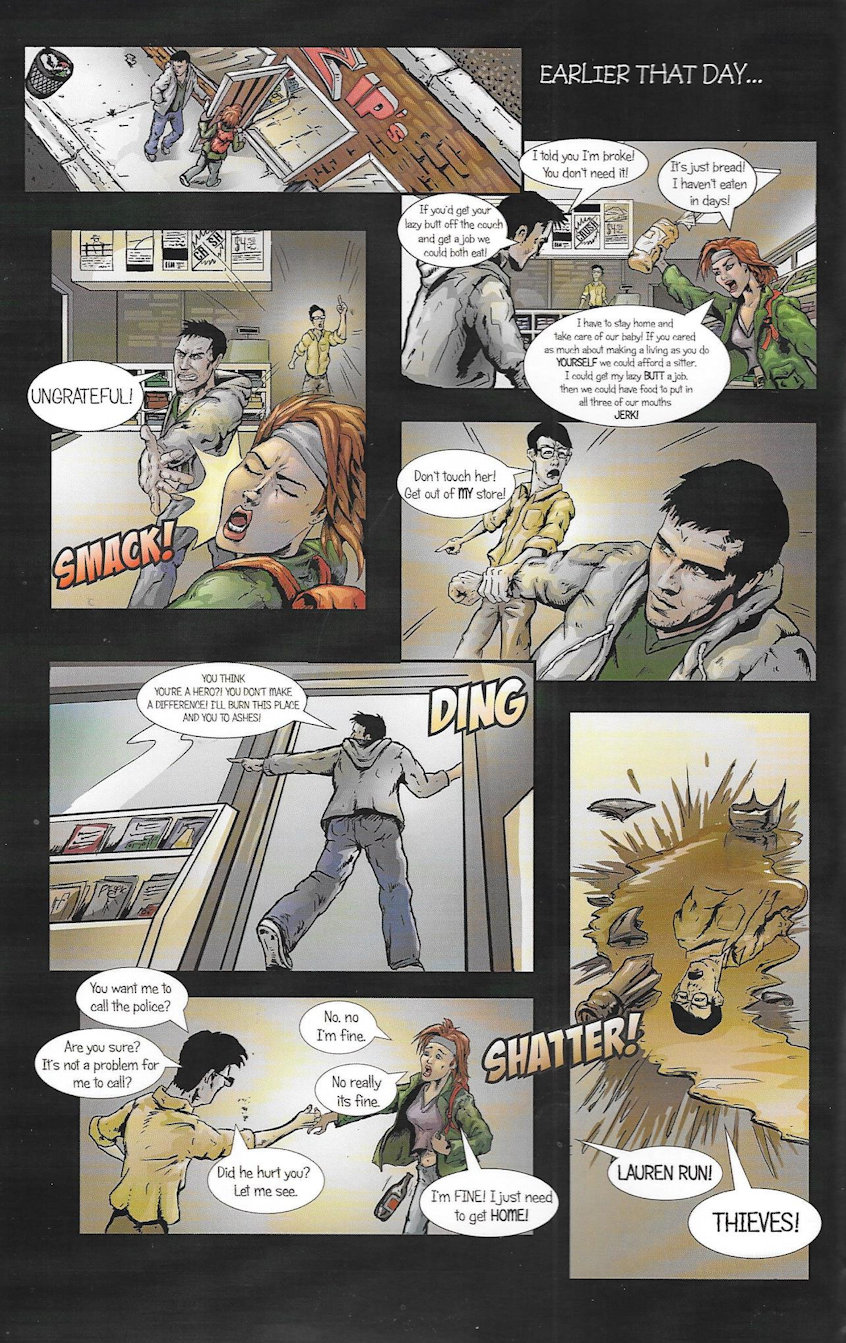 Then the following page…we are in “an ancient land.” That’s it for scene transition. We just cut away to these weird beard alchemists doing god knows what with crystals to create immortality. One berates the other for having no vision and so he sneaks away with one of the crystals. 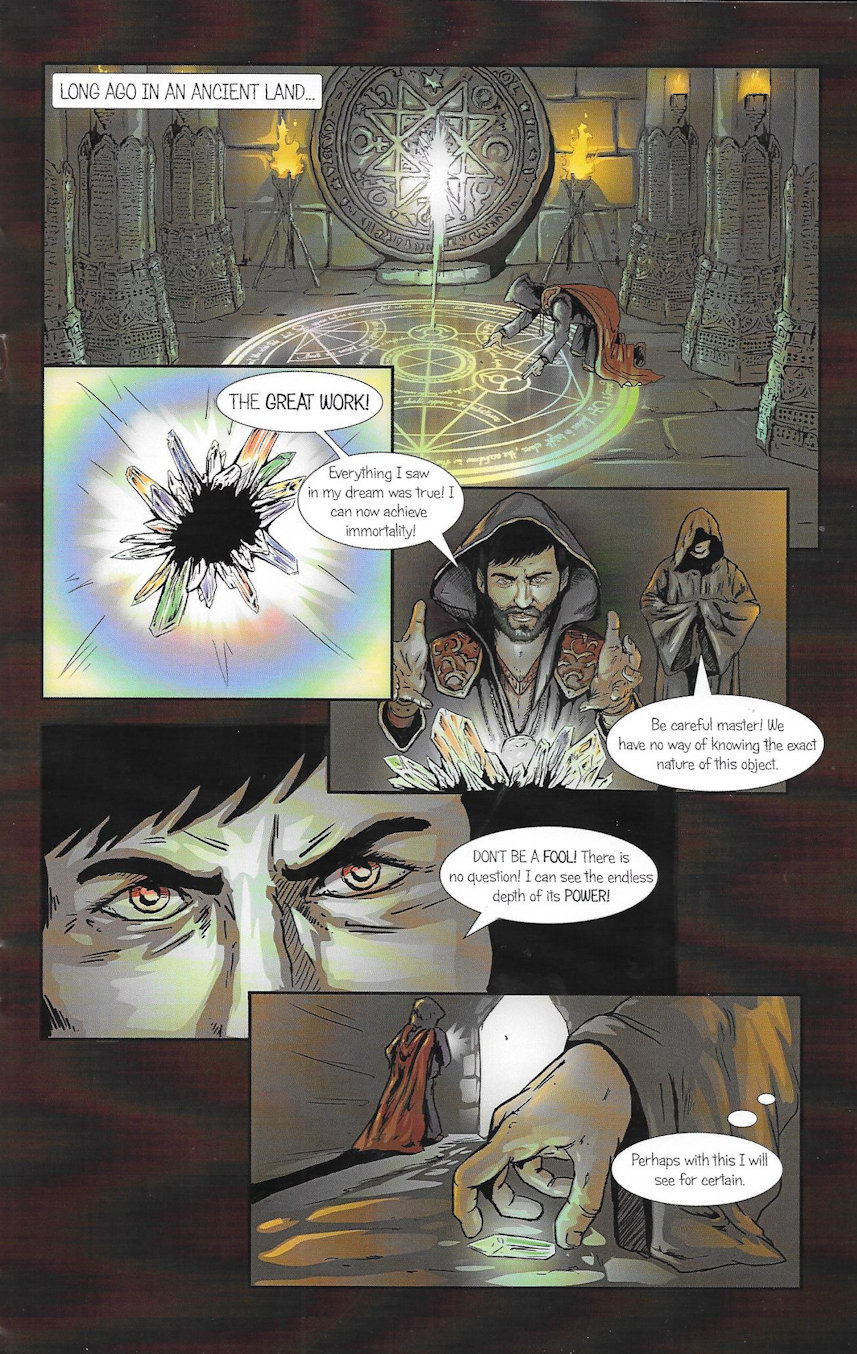 Next page? BACK to the chase started on page two. Yes, it is going be one of those books. One where the sad action sequences are diced up into tiny bites in hopes that turns them into exciting chase scenes worthy of capturing our interest. But then the writer decides that a chance isn’t what he wants so the store clerk doesn’t chase them. But he needs some kind of action, so a random gang of street toughs decides to jump the pair. 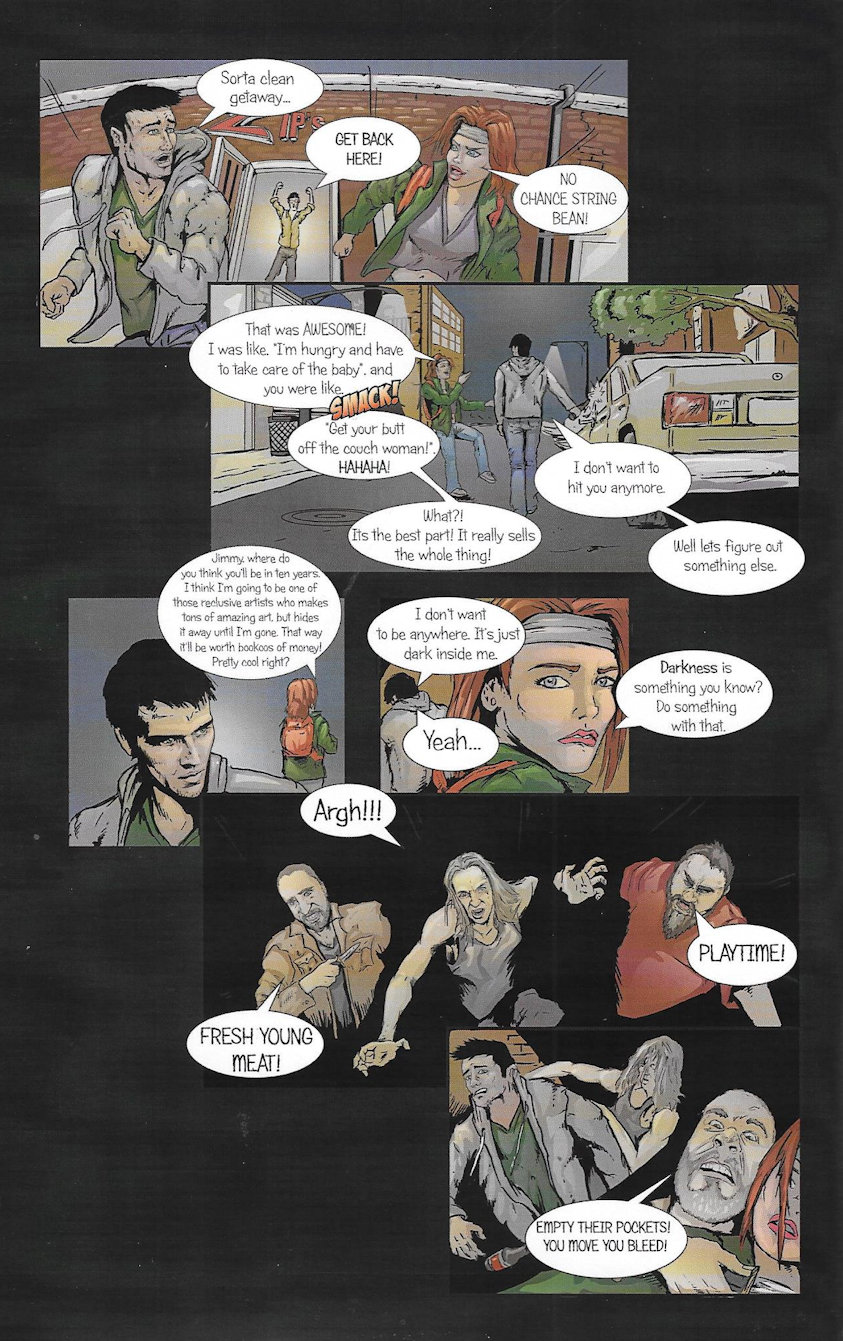 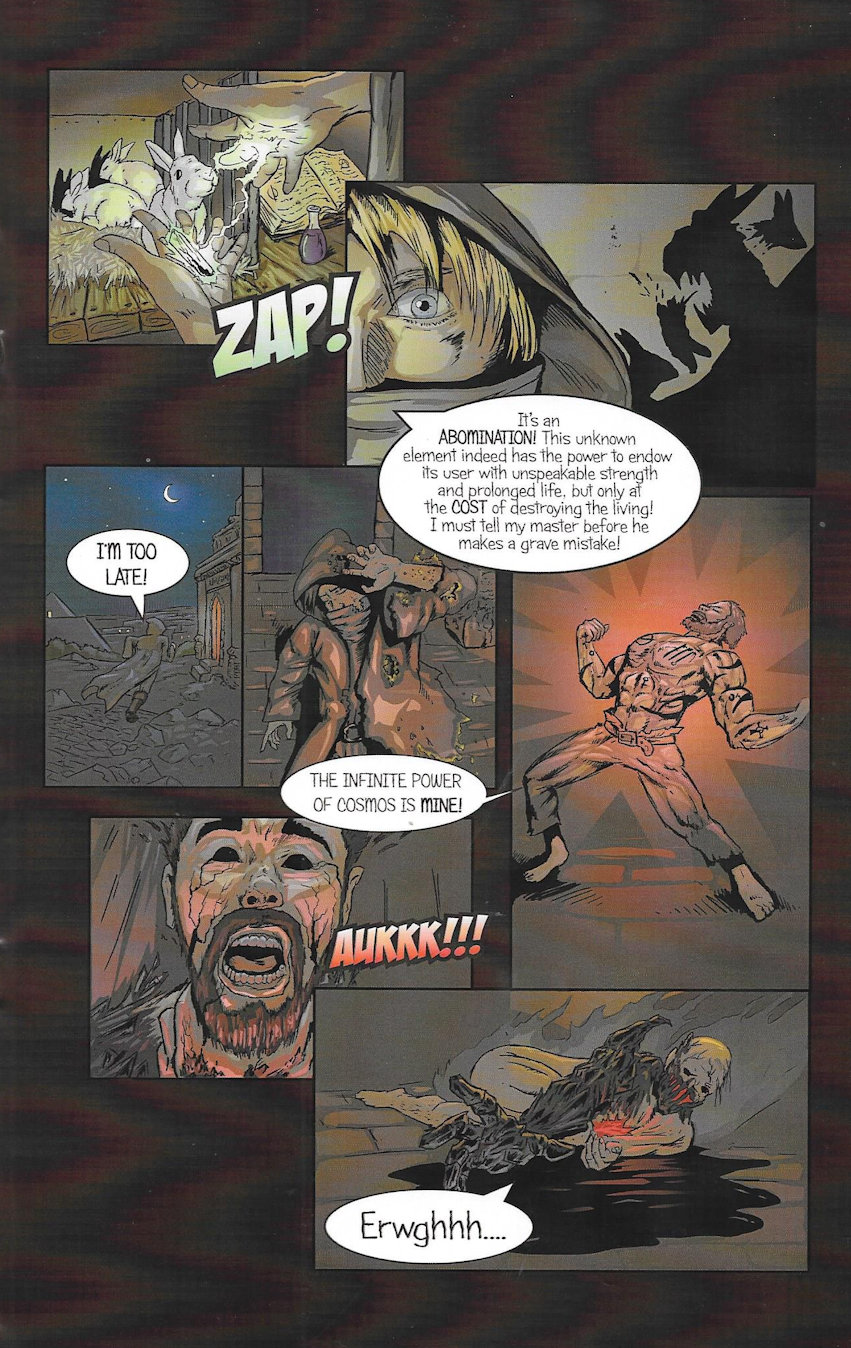 …the alchemist zaps a rabbit with the stolen crystal and he realizes it is something evil, so he goes to warn his master, but is too late! Because his master has turned into… 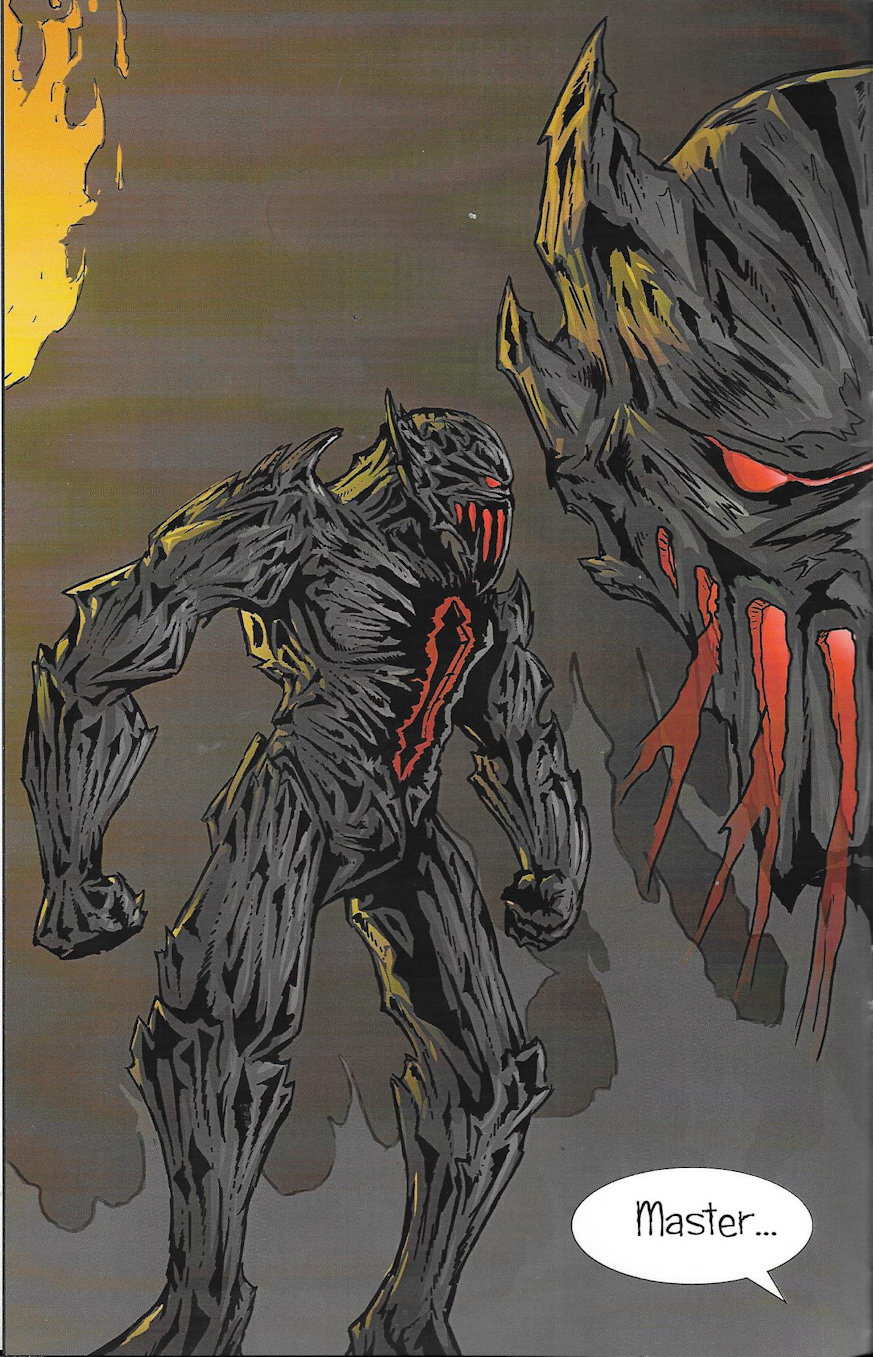 …what can only be described as one of the first draft illustrations of what the monster was supposed to look like from various close ups/full body perspectives. And the art has not improved any. At all. 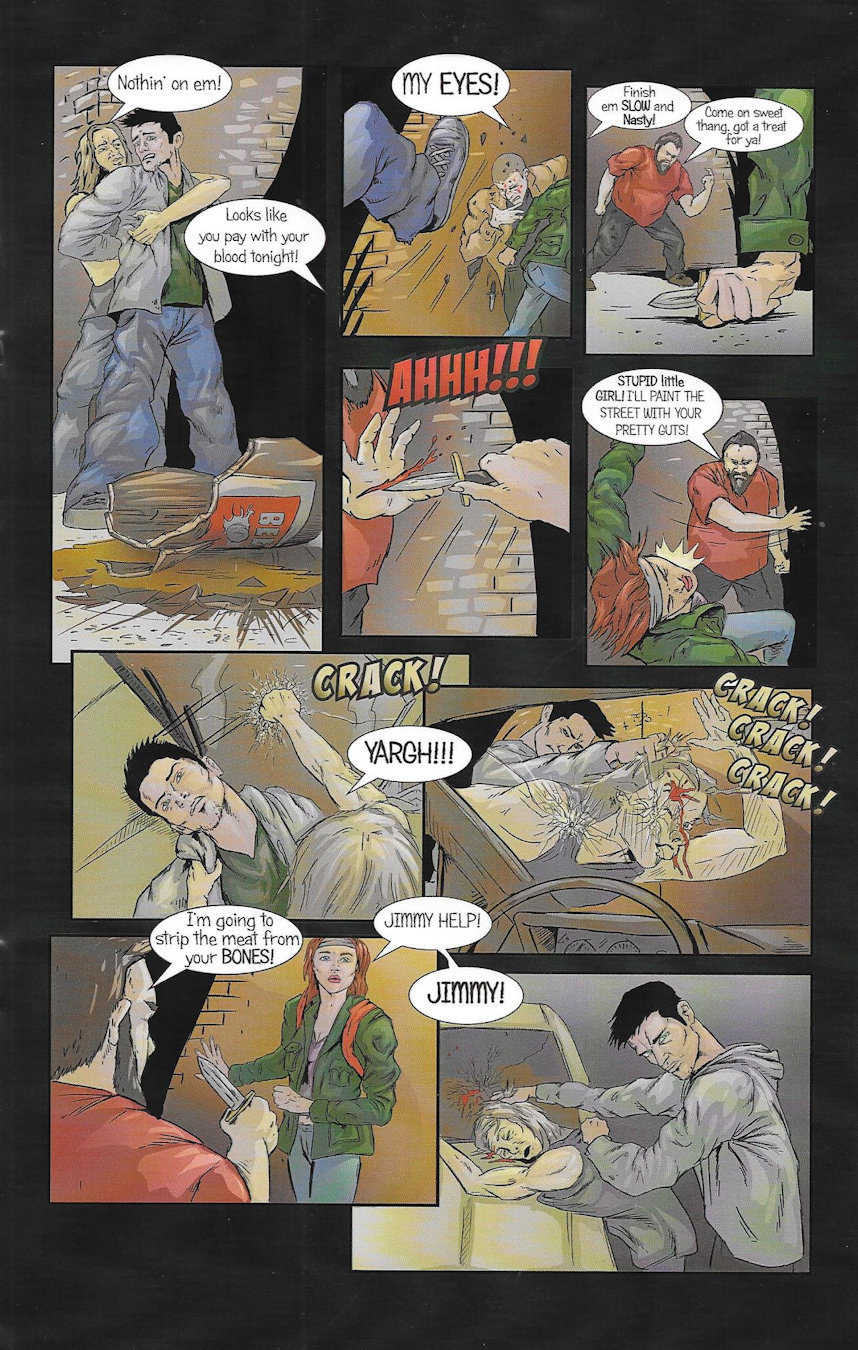 But instead of following this very important development, we of course switch back to Jimmy and Lauren in one of the most confusing fights ever. Seriously, Jimmy is grabbed from behind then someone tries to hit him from the front then he’s bashing someone into the windshield of a car…and I have no idea the transitions between all of these activities. Not to mention there is a tense showdown, so I bet when we turn the page… 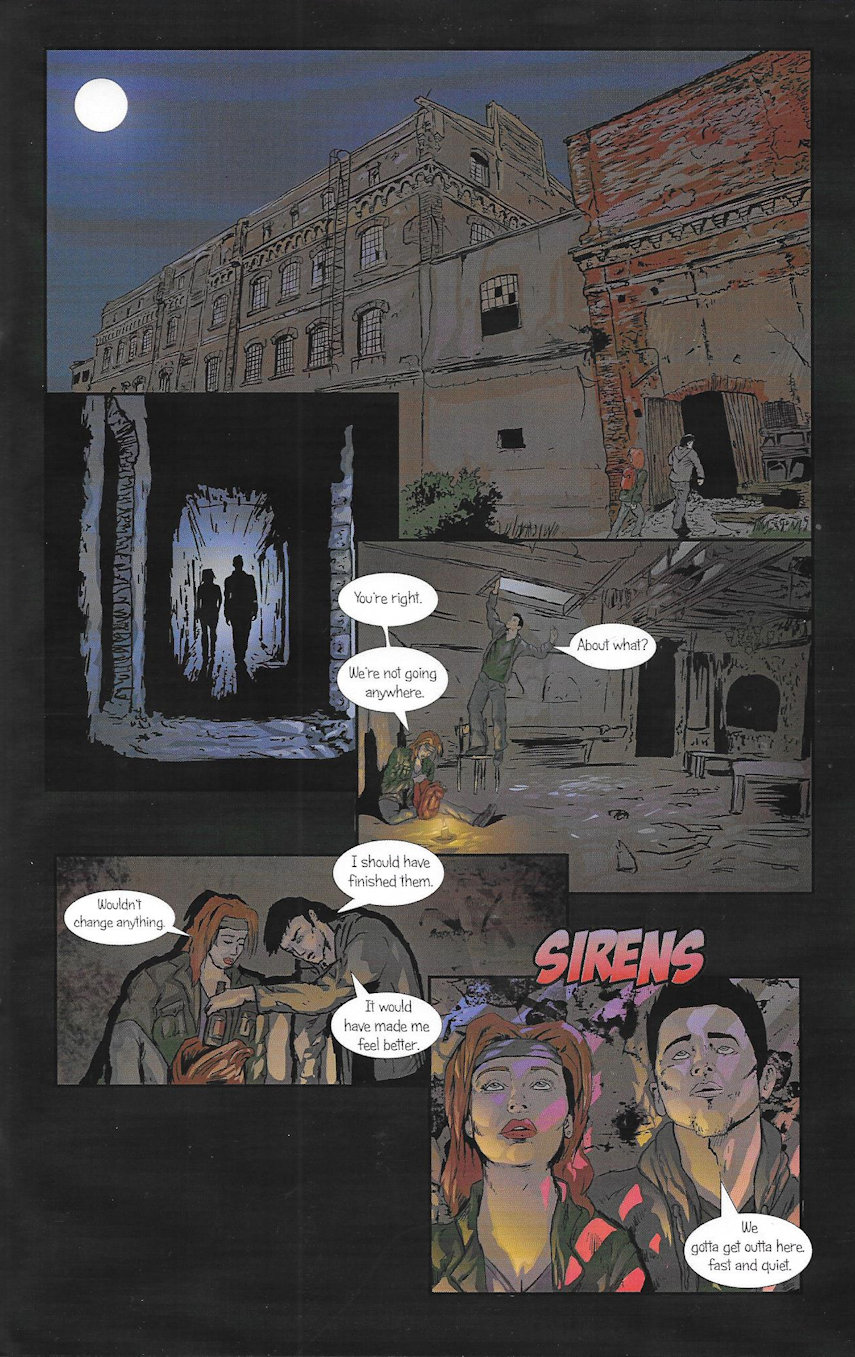 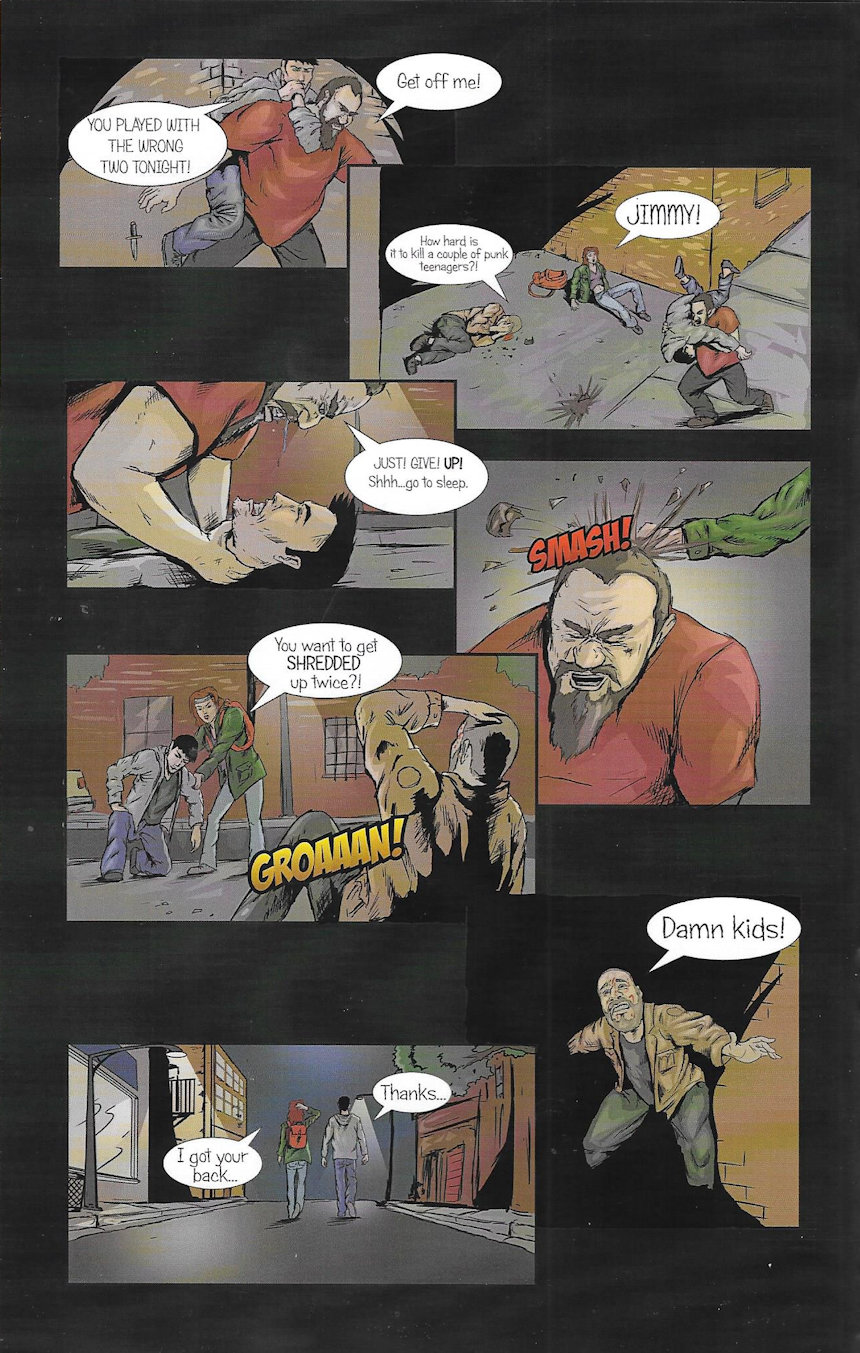 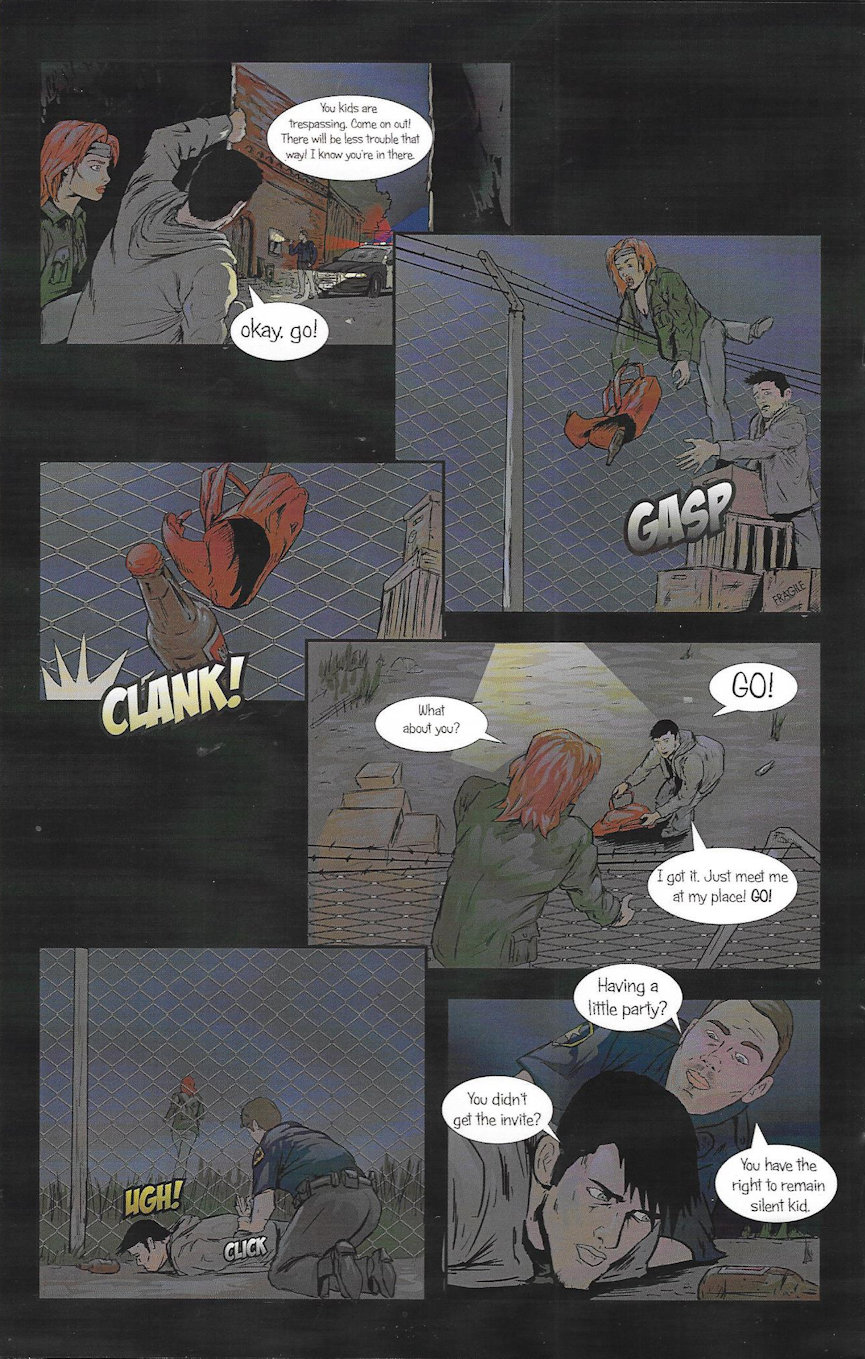 HOLY SHIT! They stuck with a storyline to a conclusion for a moment. Three pages of still incorporable fighting, aftermath, and Jimmy getting caught by the po-po, but at least we see it now and not after… 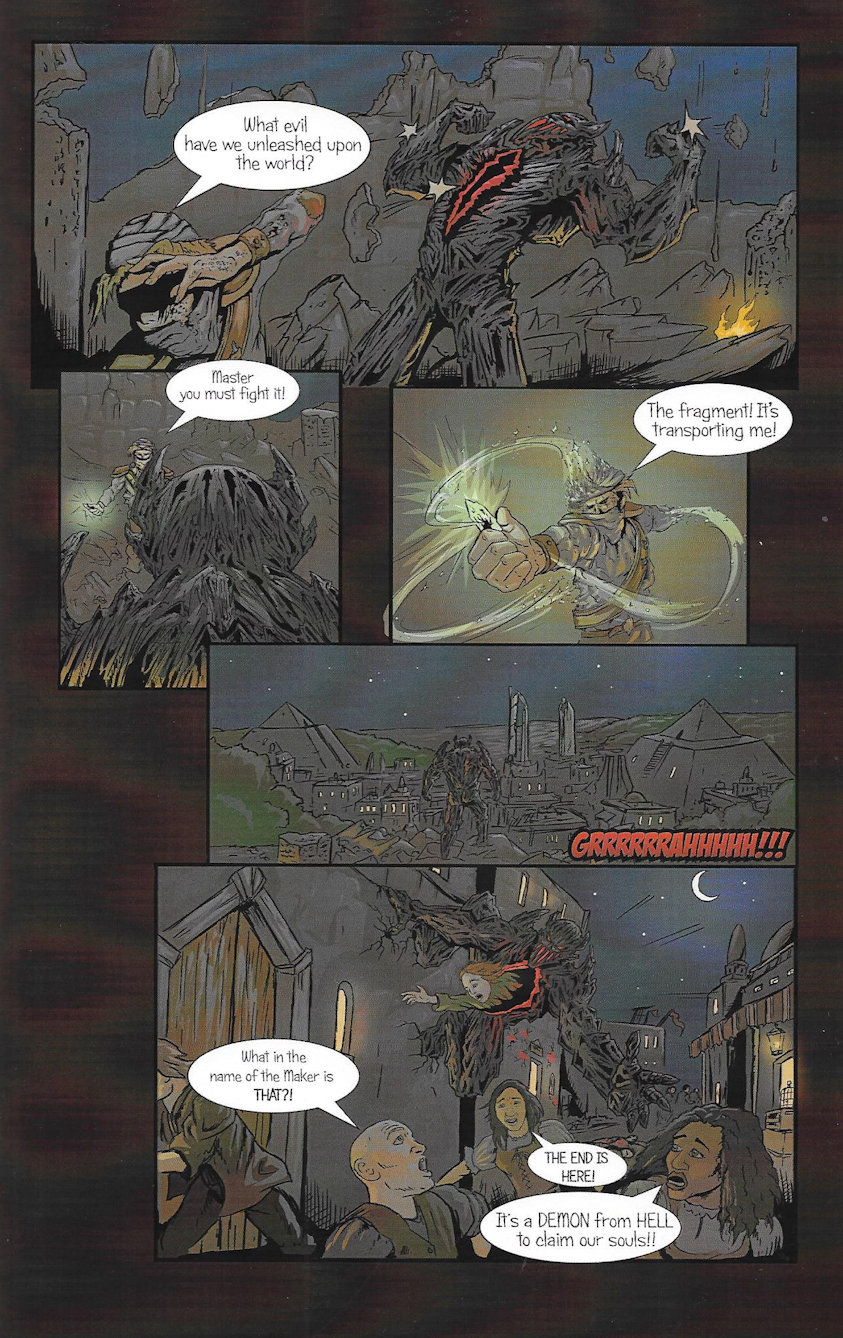 Whatever in the fuck is happening here. I think we are supposed to get that The Gate travels forward in time and eats an entire village. Except for the kid that the other alchemist rescues so he can “show him his big crystal.” 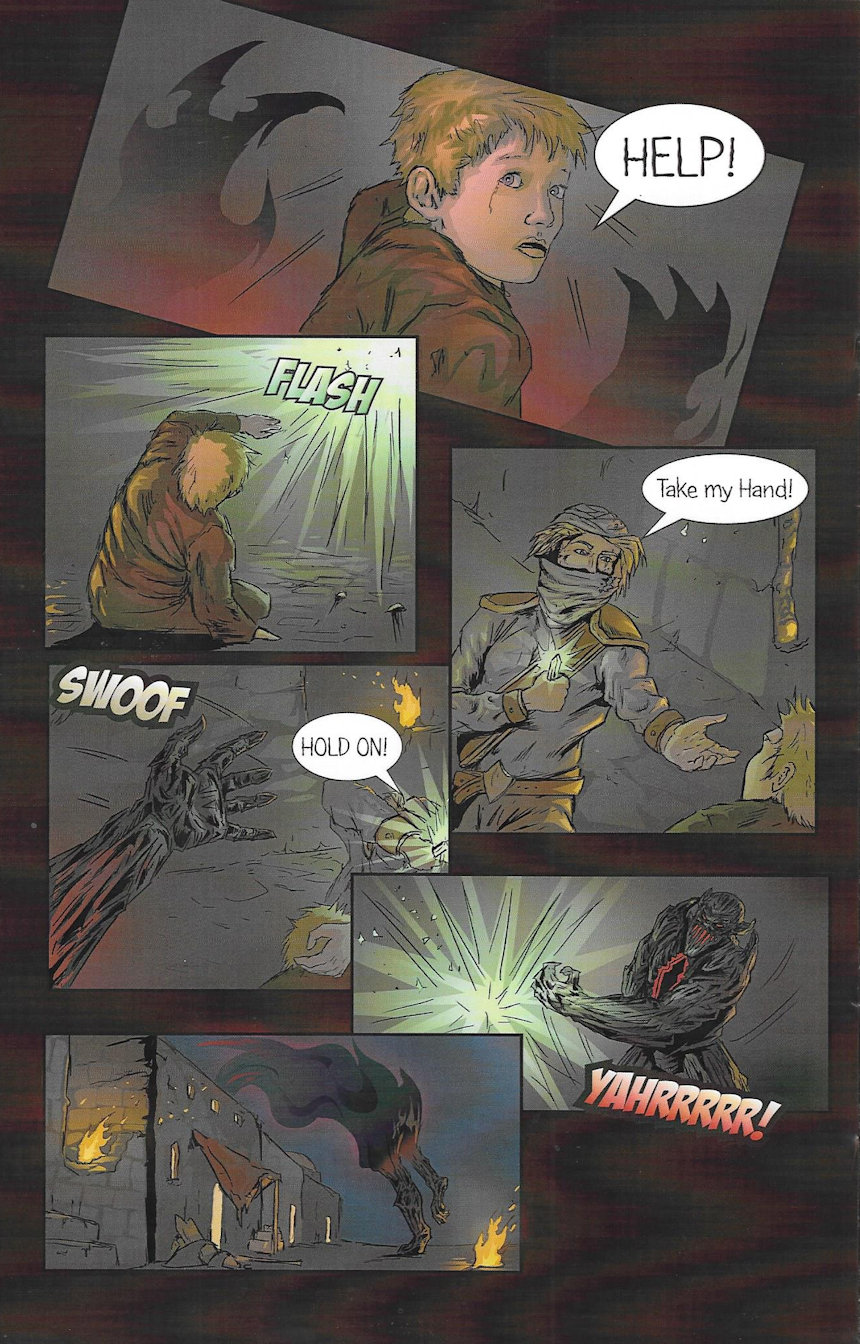 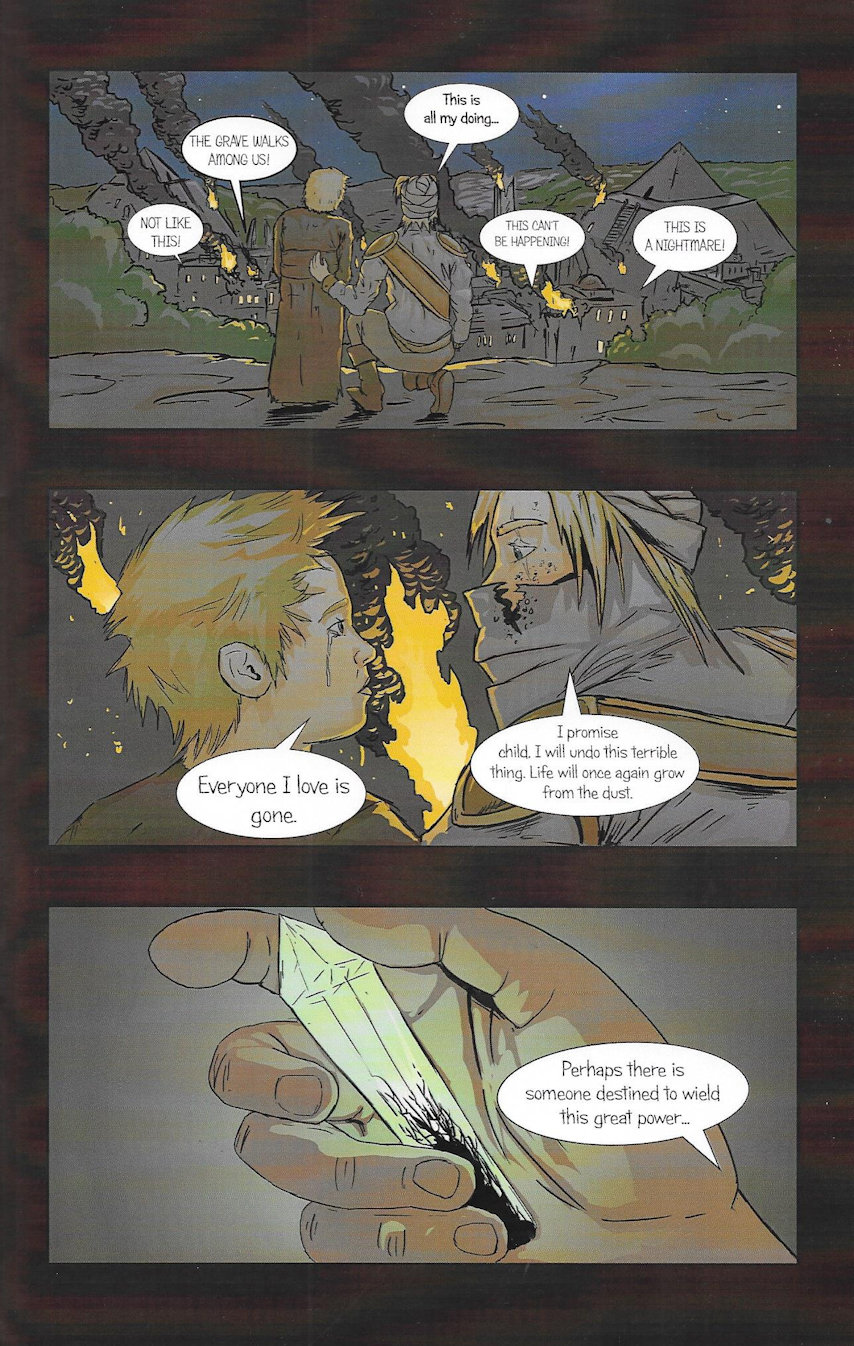 And with that we know the jail cell guy is the little boy, all grown up and schooled by the alchemist and he is offering Jimmy some portion of the Gate’s power to protect the world from it’s influence and frequent city eating. 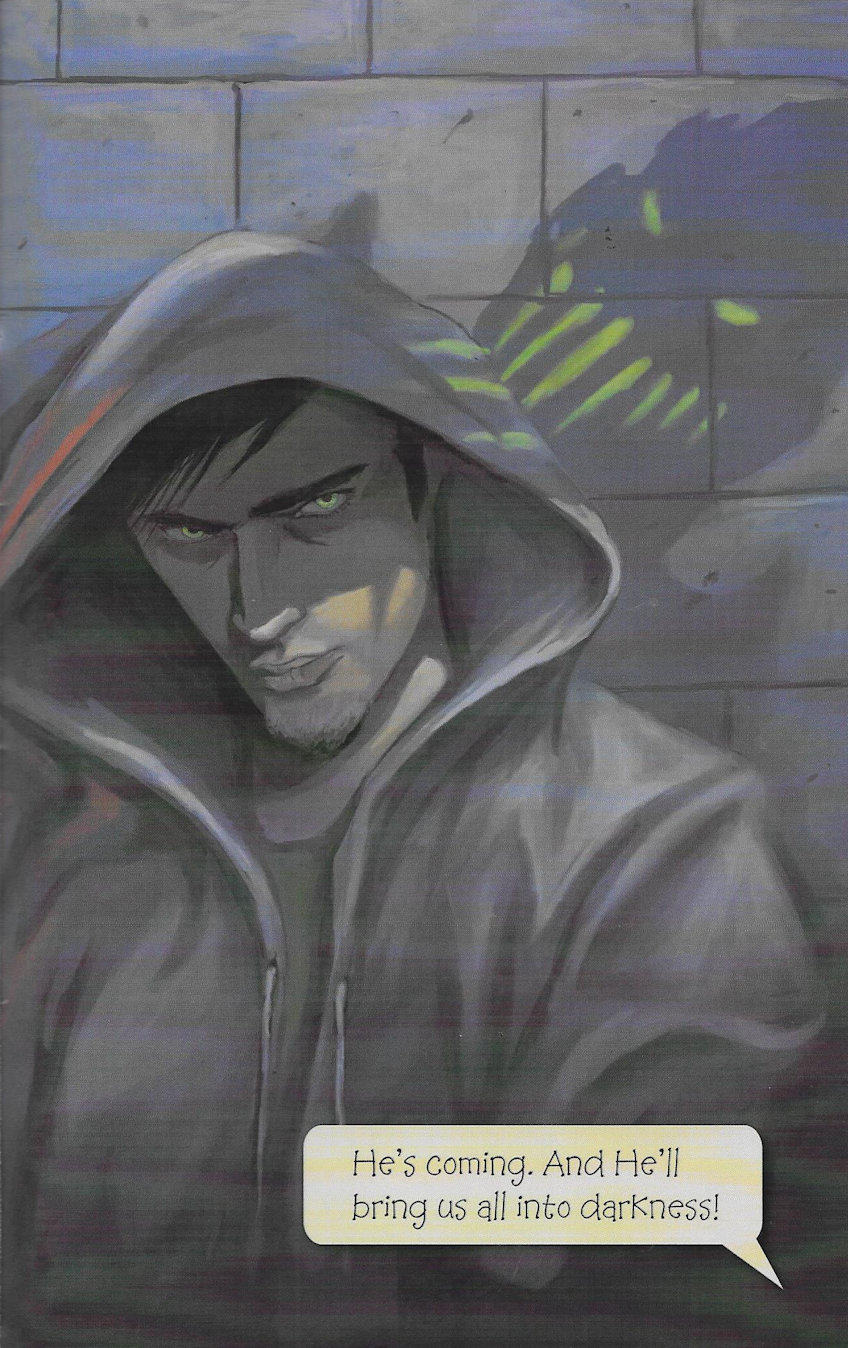 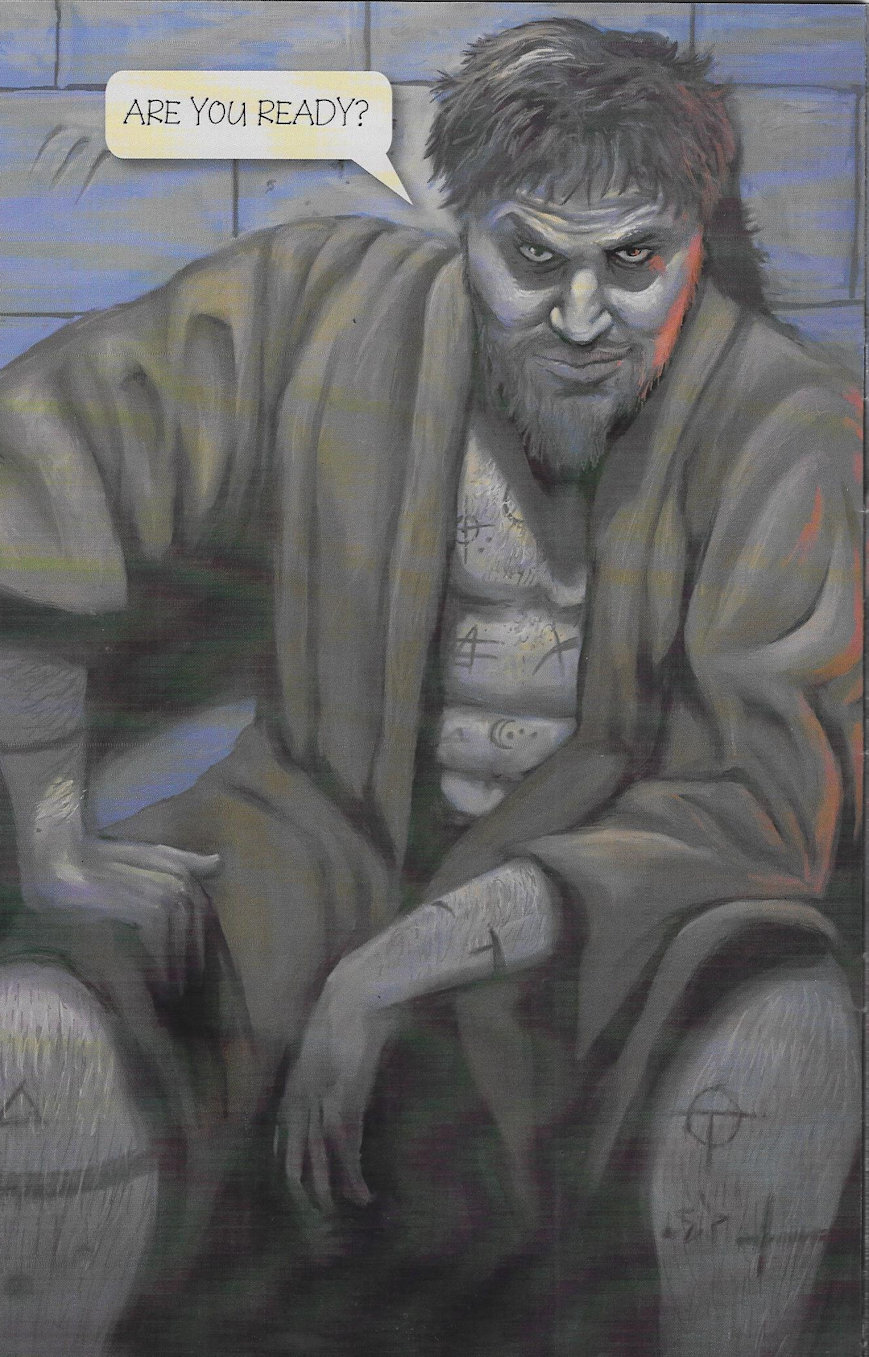 Stupid, badly done book. Not horror and I’m so sorry for throwing it in this pile, but it needed to be dealt with.

What happened in future issues? Not a clue. I don’t think there were any. And try as he might, Huckabee couldn’t get this idea off the ground. His prose novel has ZERO reviews and he won’t even allow you to read one single page of the actual book on Amazon’s “Look Inside” feature. He setup a “kickstarter” type deal on Indiegogo to raise thousands of dollars to build a The Gate suit to use in a movie of The Gate, a terrible idea if ever there was one.

And sadly, one that Huckabee never gave up on, going back to that well 8 times for funding on some portion of a The Gate movie project, a move that racked up around $1,000. Not certain why the world needs a Gate movie. We already had Spawn and The Guyver movies and neither of them made back enough to cover expenses. Quit while the genre is behind, dude.

From the looks of things he did get a The Gate suit made at some point, which looks…okay, I’m going to say impressive in the short youtube of it, but seriously: the suit is only a small part of a successful character and The Gate will never be that. It is literally like money spent on a good Halloween decoration at this point. Even the comic con attendees were like “Who is that?” because The Gate will forever be a no-name hero-villain.

And whatever it is, it isn’t horror.

Posted by SonOfCthulhu at 6:49 PM