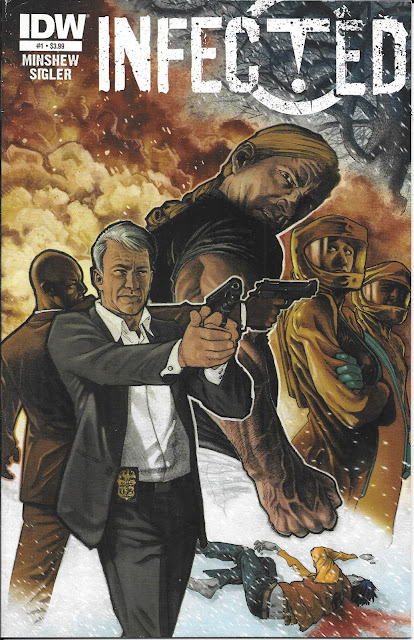 What better place to begin the Crapbox’s Halloween run up in the year where a pandemic has caused us all to abort our lives than a comic book about a pandemic that ended up being the first of an abortive series?

Infected is the first novel in writer Scott Sigler’s The Infected trilogy, a series about an alien pathogen that turns people homicidal. He put out the first book way back in 2008. Sigler’s a horror/sci-fi author who has hit the New York Times bestseller list at least once and has over a dozen novels to his name. When jumping on board for a four-issue graphic novel adaptation of his first book “Infected” in 2012, Sigler had to have grand dreams of doing each book in the trilogy as a mini-series.

Alas, that was not to be.

Seems something happened in the process of putting the first issue to bed. Something that caused delays to issue number two. Delays so bad that IDW shelved the whole project after one issue. That’s right: this is all the story we are getting about the pandemic.

Feels a bit like a natural place to begin. A book as abortive as our lives have been...so begin we shall…

The story starts with a Latina woman marching through the snow after having jumped from a train apparently. 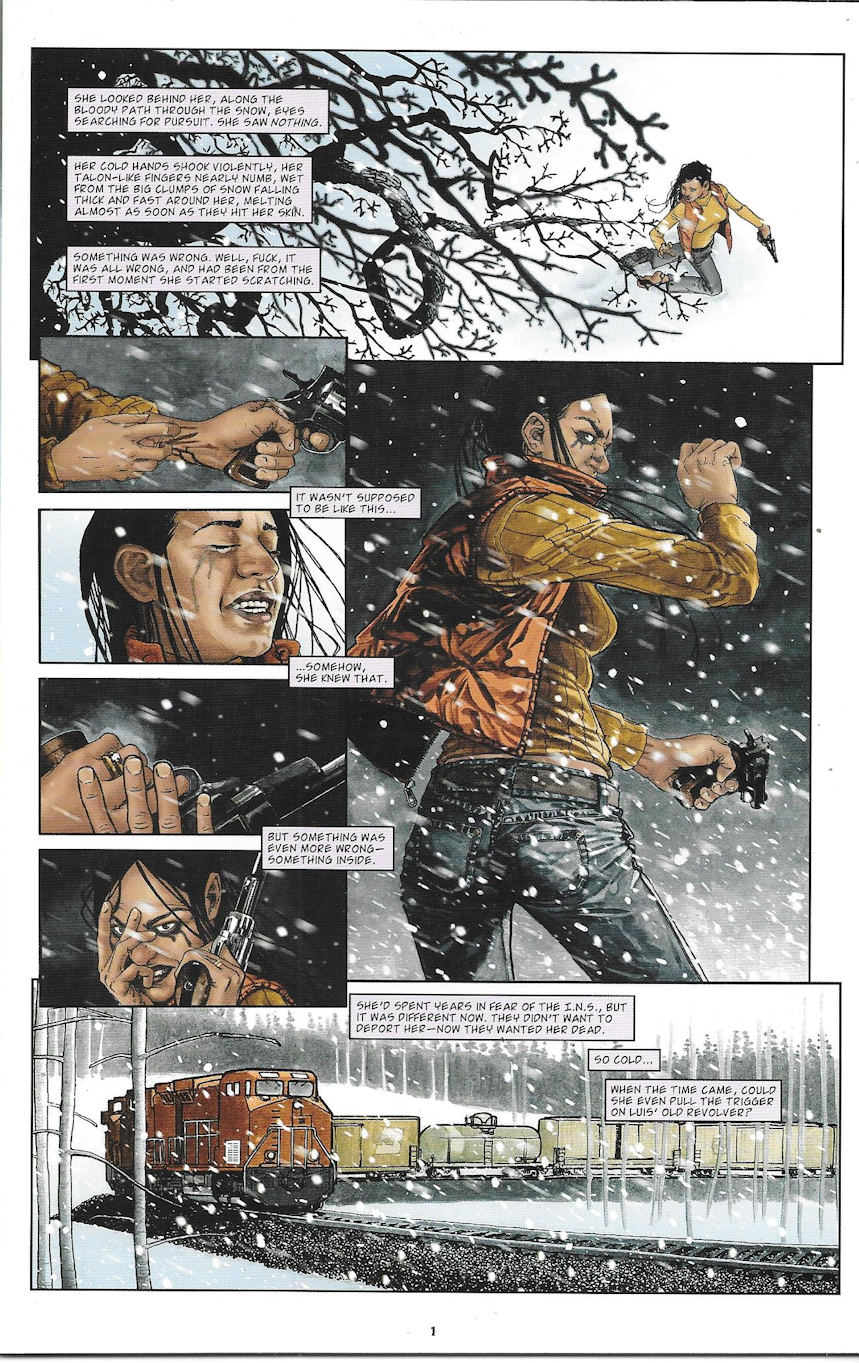 For you Trumpers out there, the woman is also an illegal alien who just happens to be harboring some weird itchy infection that we will discover is part of an alien invasion tactic to wipe out humanity. In this universe, the "Build that Wall" might not have been such a bad idea. Don’t worry about all these plot points though, that all will be made clear in the issues that would have been coming out later. Or I guess do worry, as this issue’s setup ends up being pretty hollow and confusing.

But if you worry about “Der taken our jurbs!” then you can add to that list “And infecting us with alien triangle microbs!” Holy hell! I think this book is selling the beginning of a Q-Anon theory. THAT IS SCARY! This is where those nutos are getting their ideas. 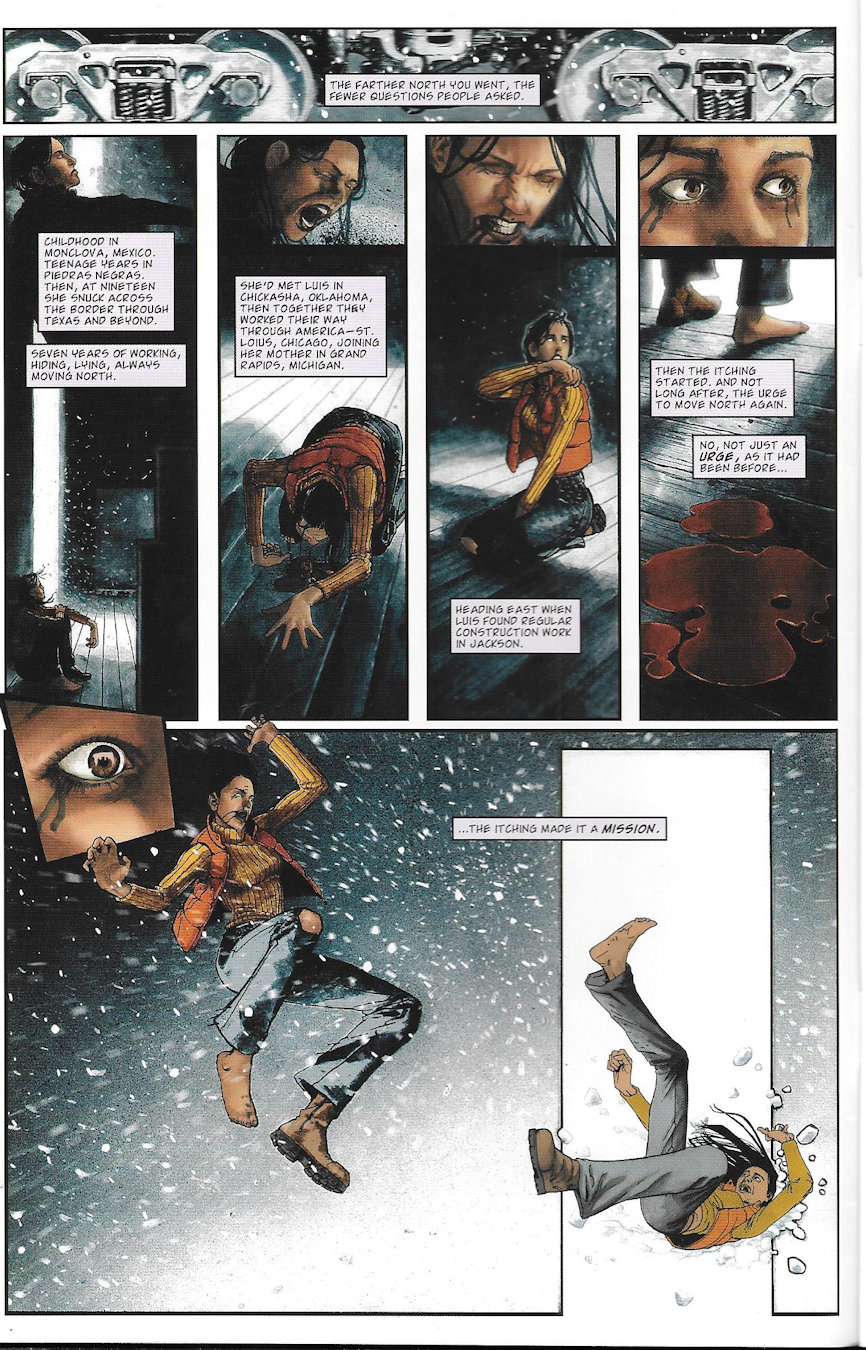 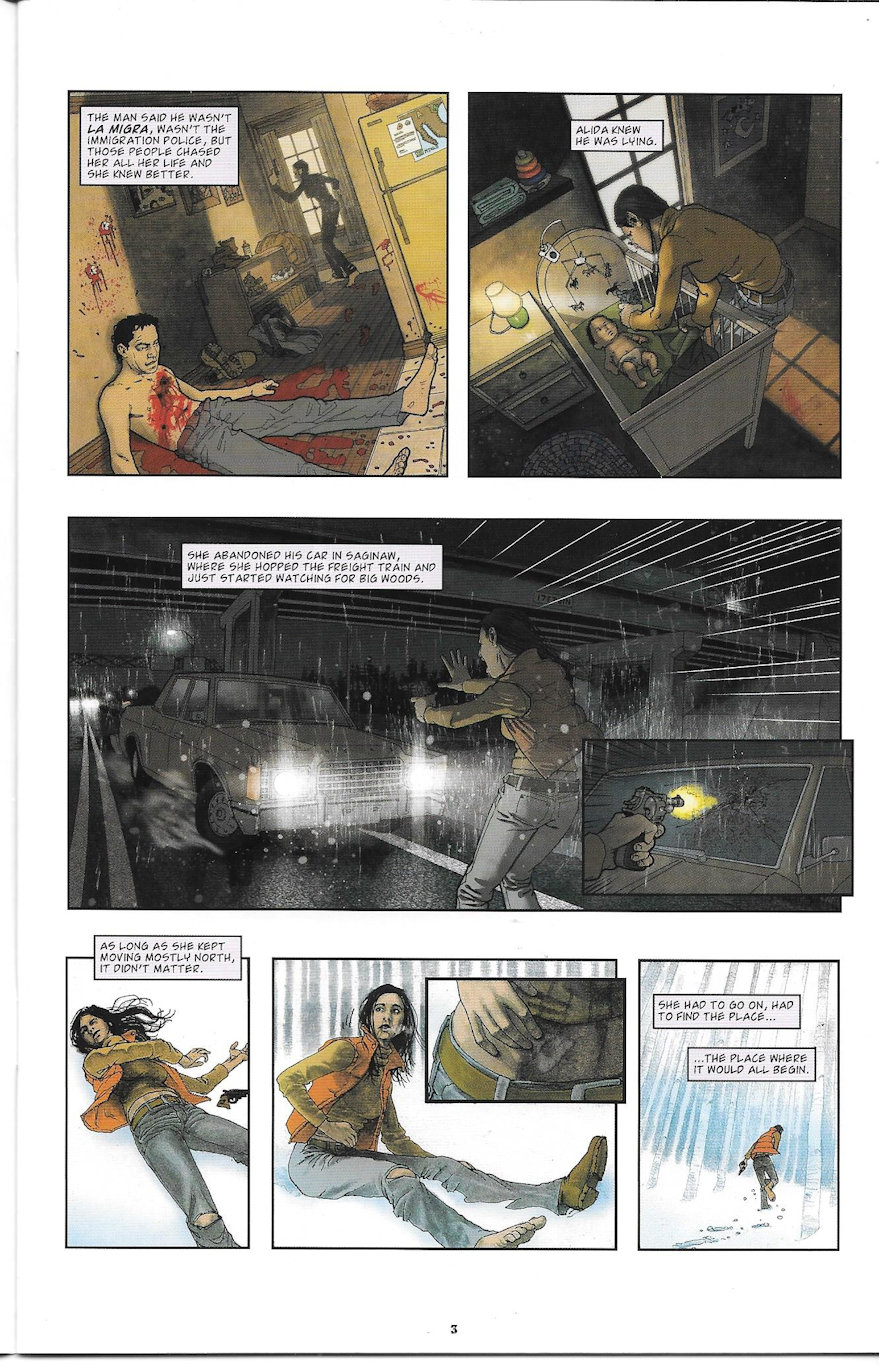 Anyway, this is the start of our story, which I am not going to lie is kind of a jumbled mess. It doesn’t appear to attach to any thing that comes after that I can figure out. This woman is driven North by the virus, which we don’t know is sentient at this point in the story (or ever will know except by reading the Amazon book summaries), so the reason she drags herself into a vacant snow-covered field and kills herself is…well…dumb. 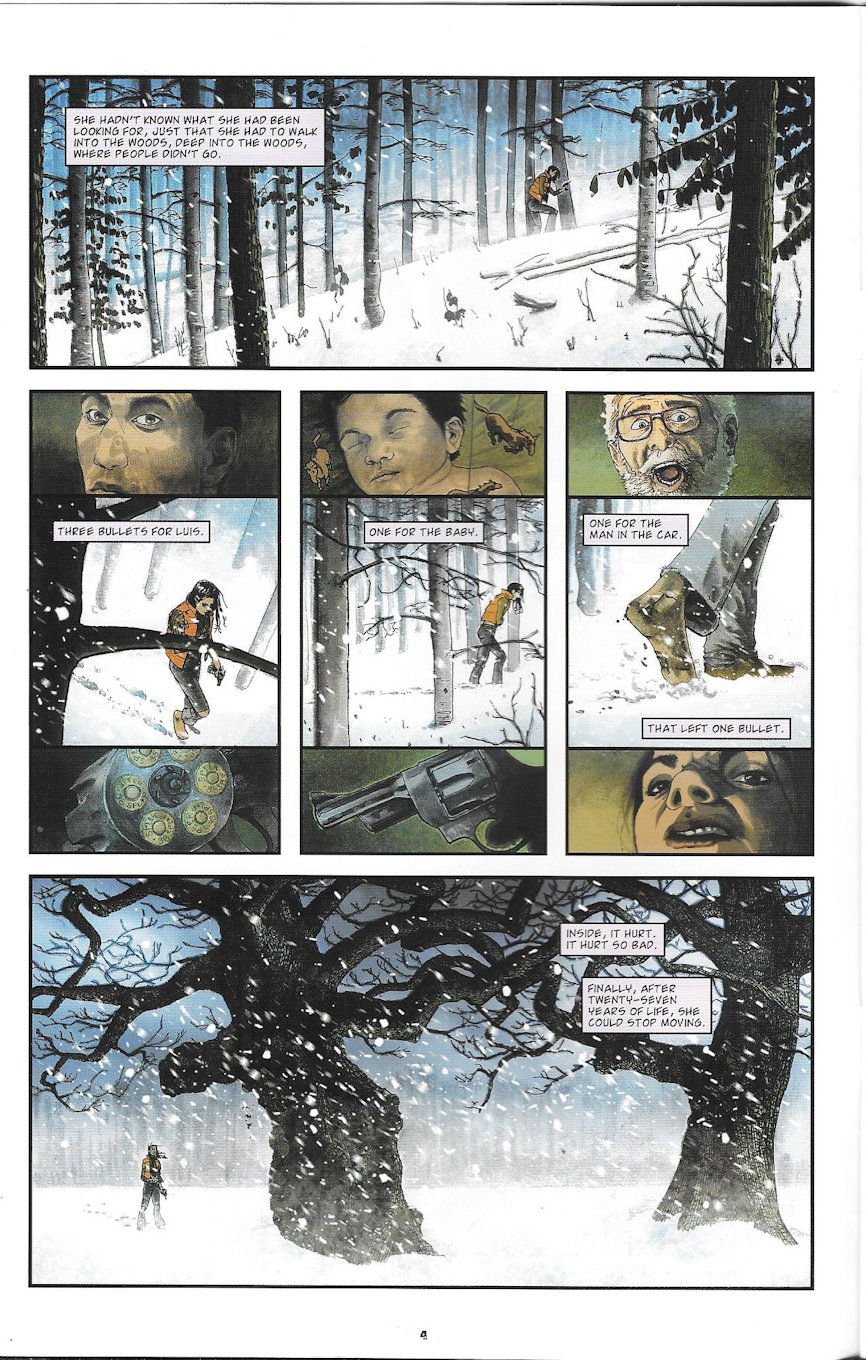 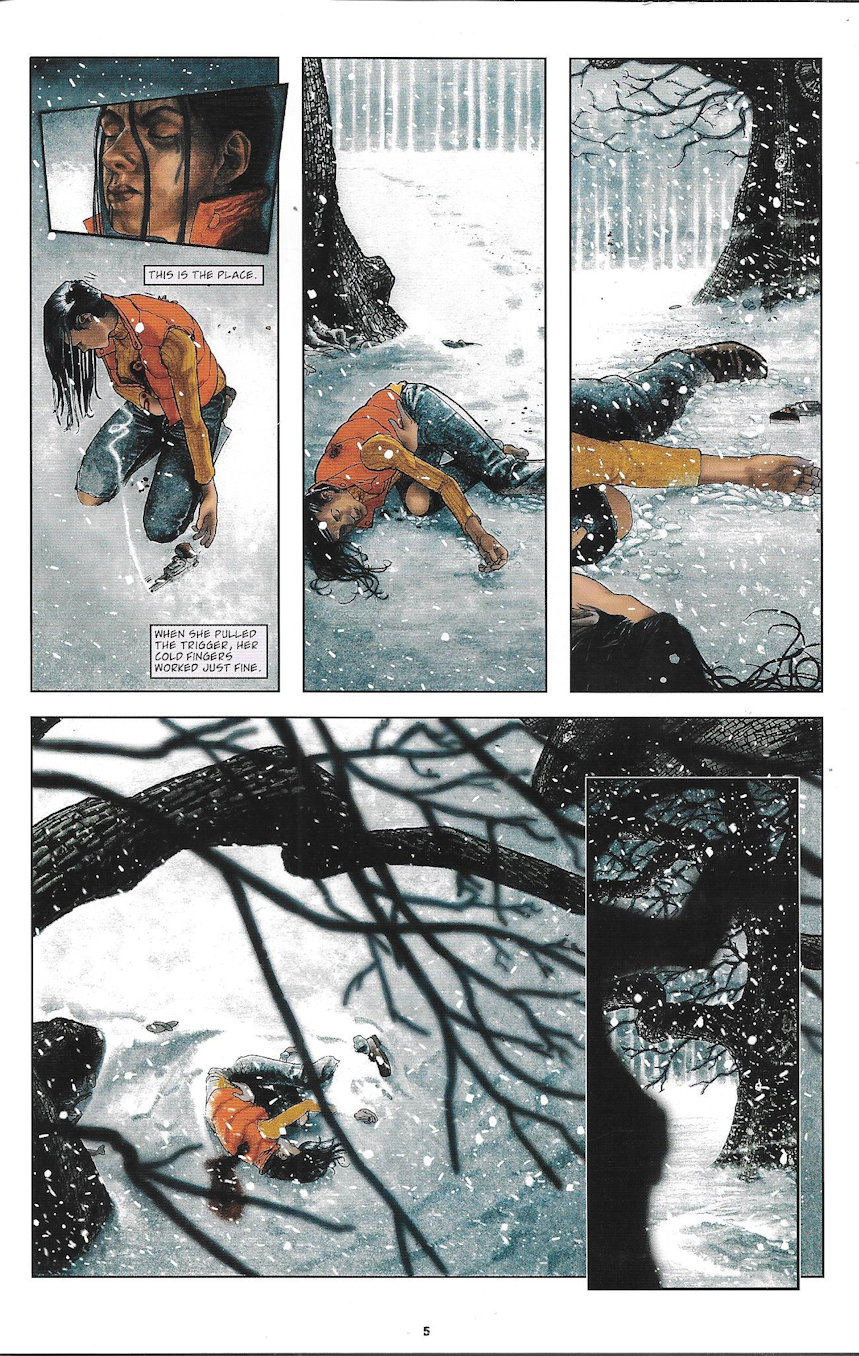 It’s a dumb opening. It robs the audience of five pages of story and for that we get neither a character we understand nor a plot that makes a great deal of sense. I’m sure it was supposed to appear mysterious and create intrigue, but truly it is a red herring to the actual story and I am not impressed.

Moving on, we DO get characters who will linger on for a bit. We start with a crazed man calling in to a radio show and going on about “the triangles made him do it”… 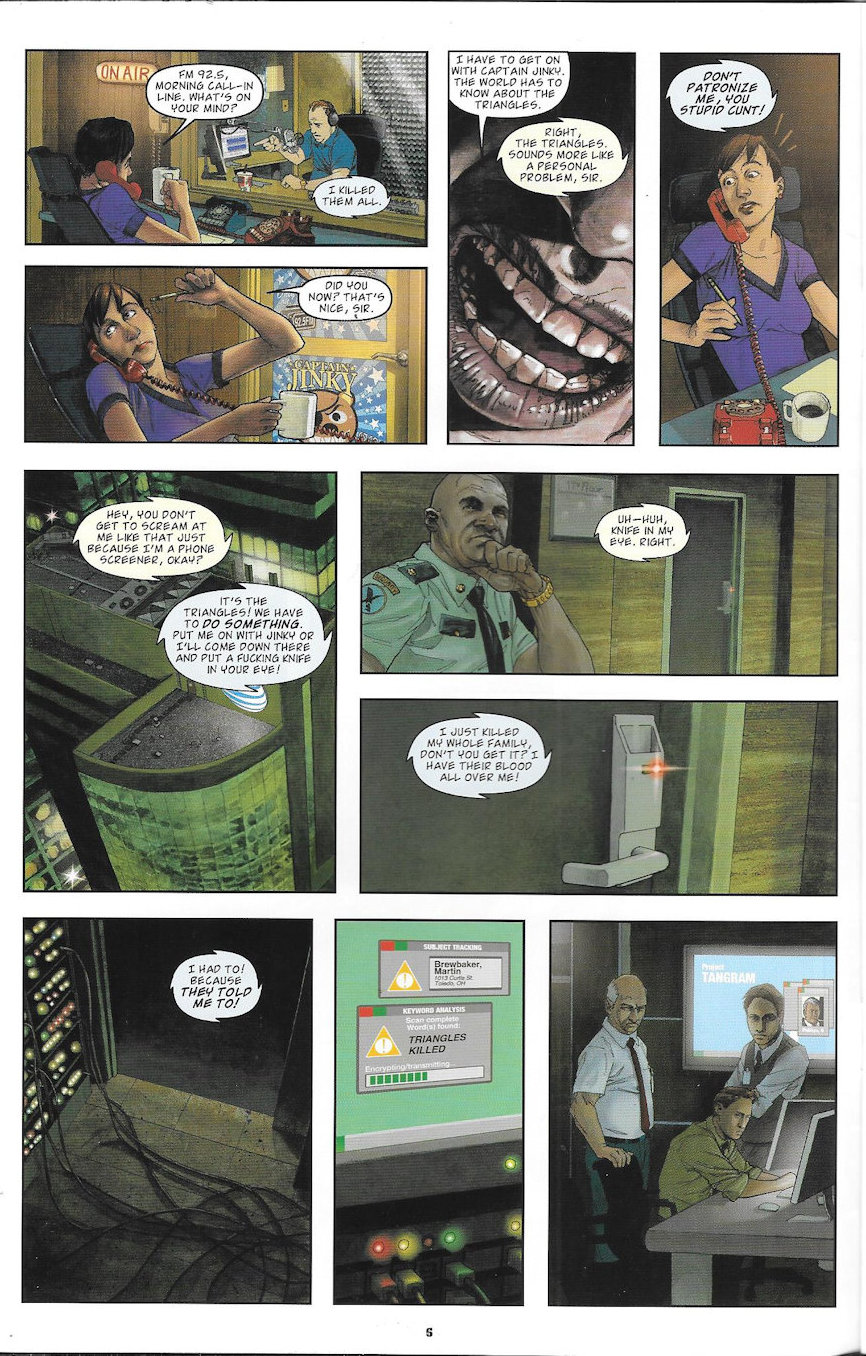 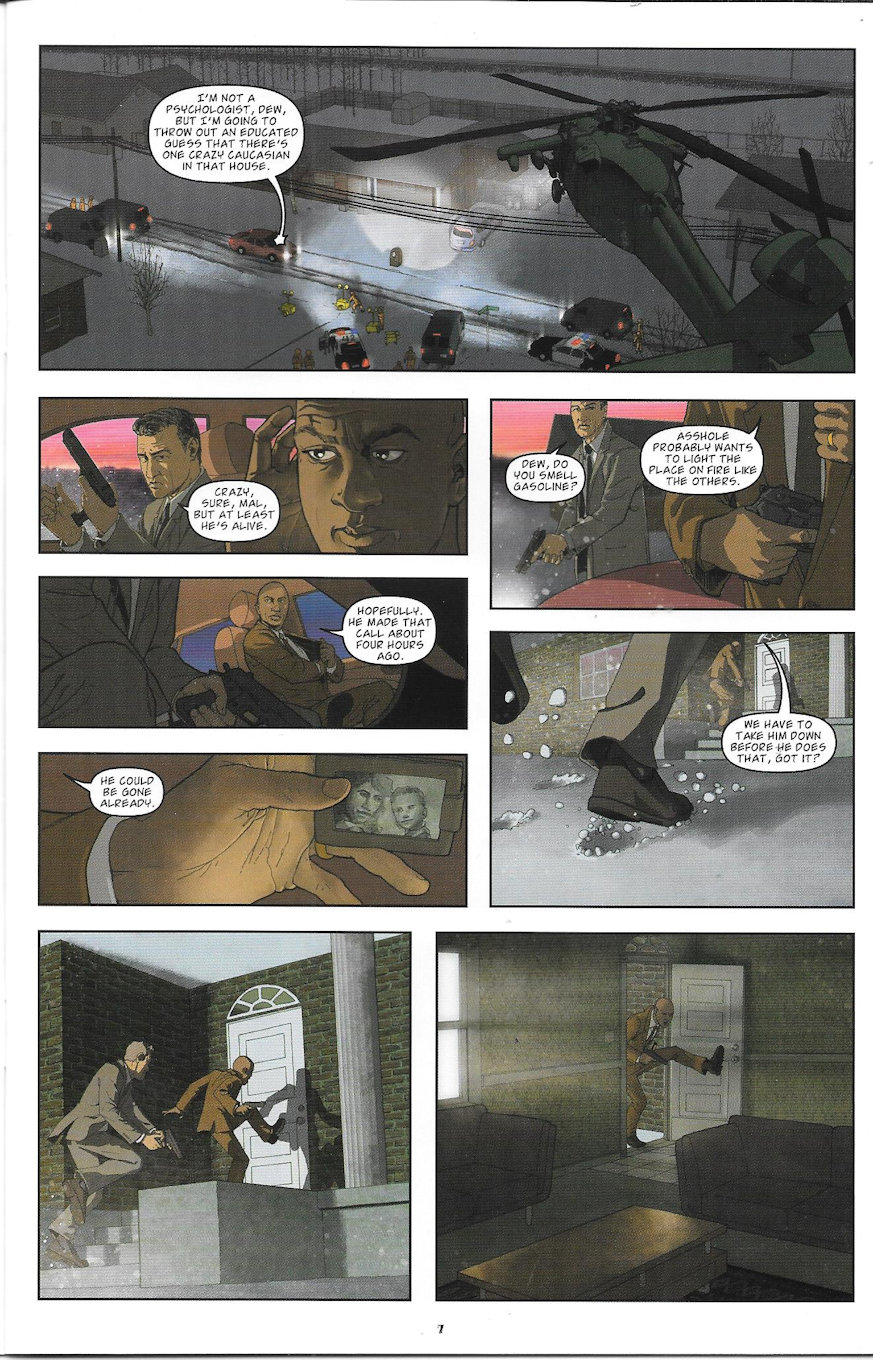 …which leads to a full scale police raid of his house since he is admitting to multiple murders. 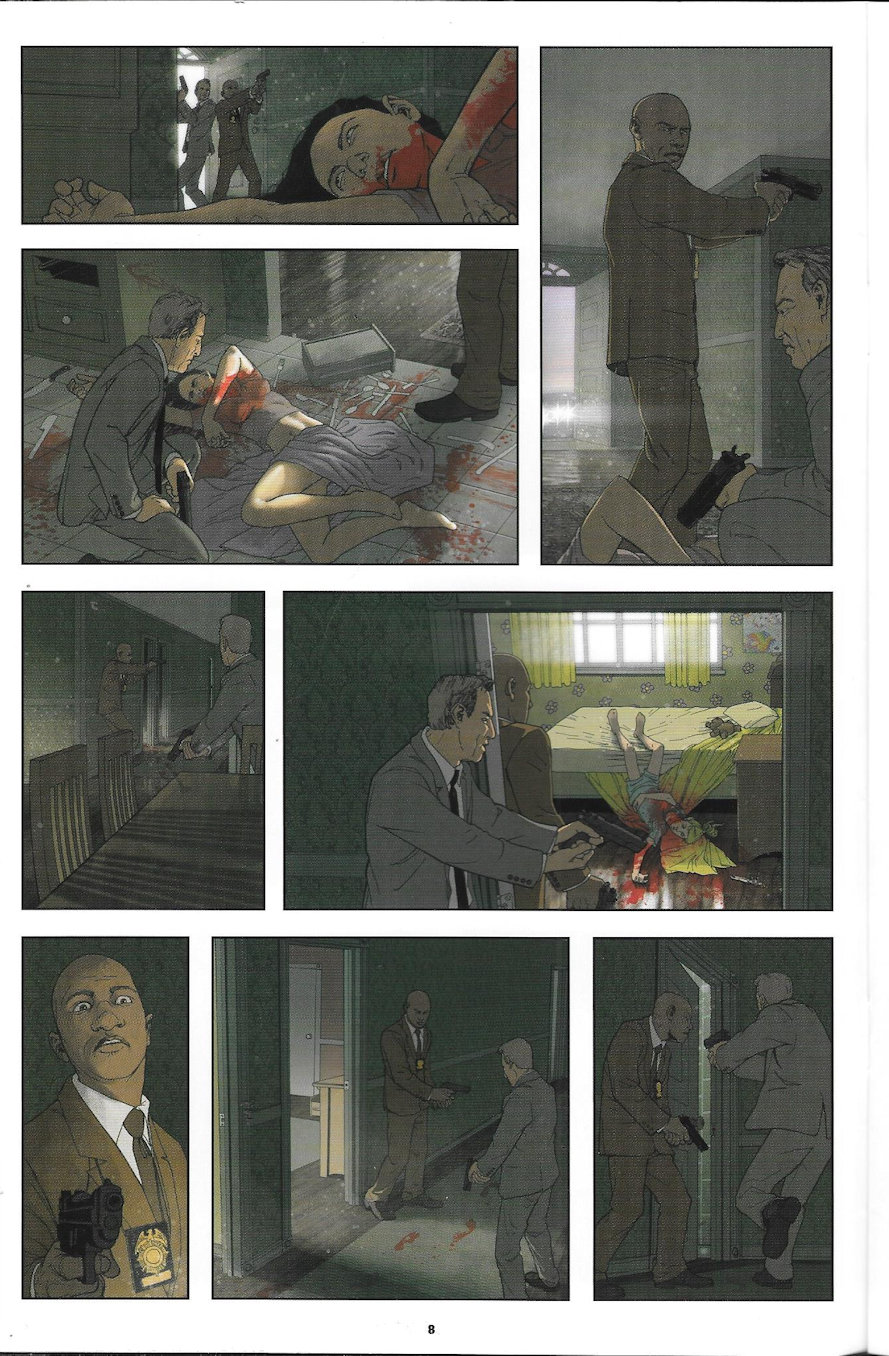 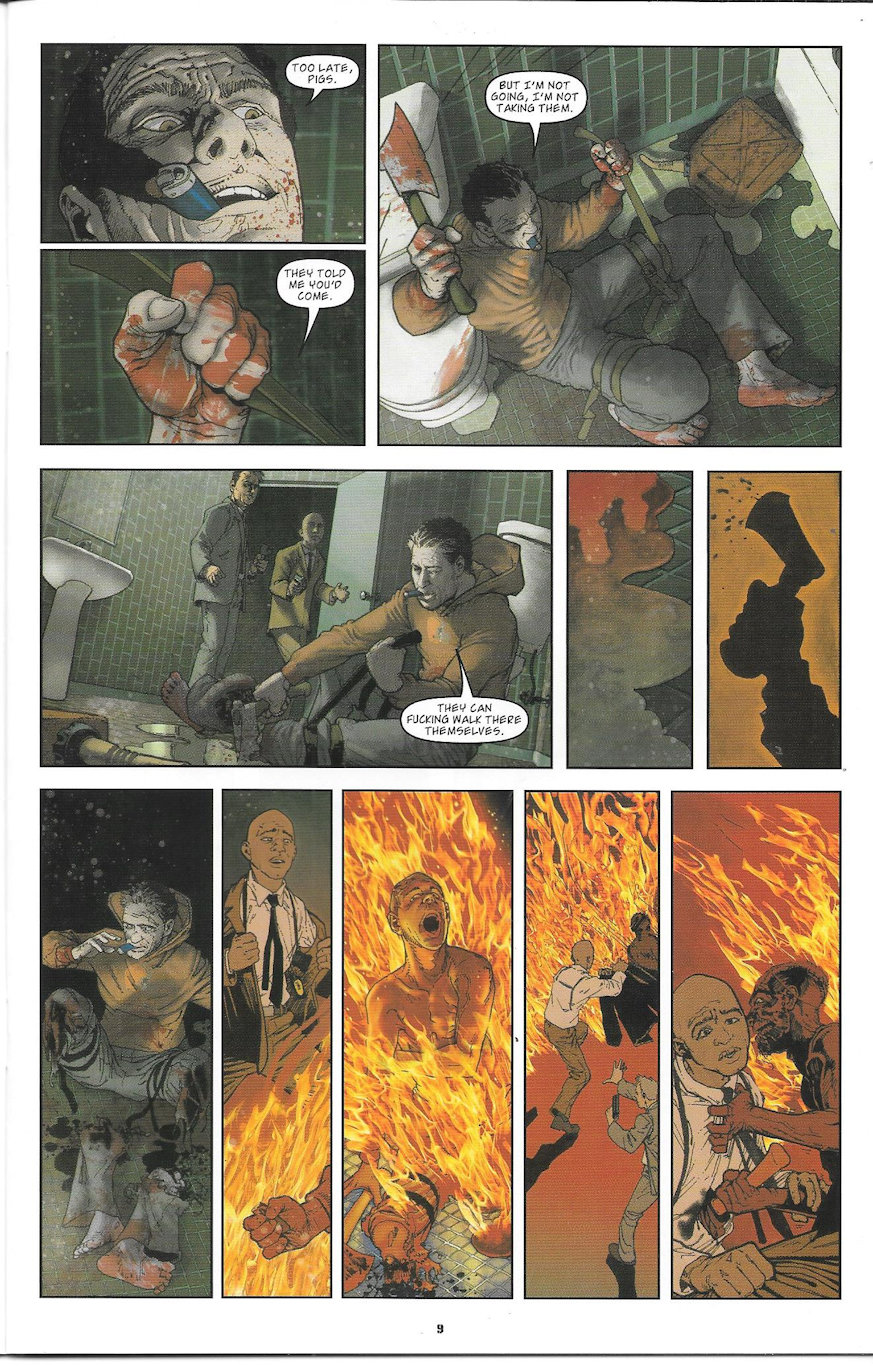 …and a live infected perpetrator cutting himself off at the ankles and about to serve himself up as the main course in a human bbq. Unfortunately, the officers are just a tad bit late in stopping either of these things from happening. 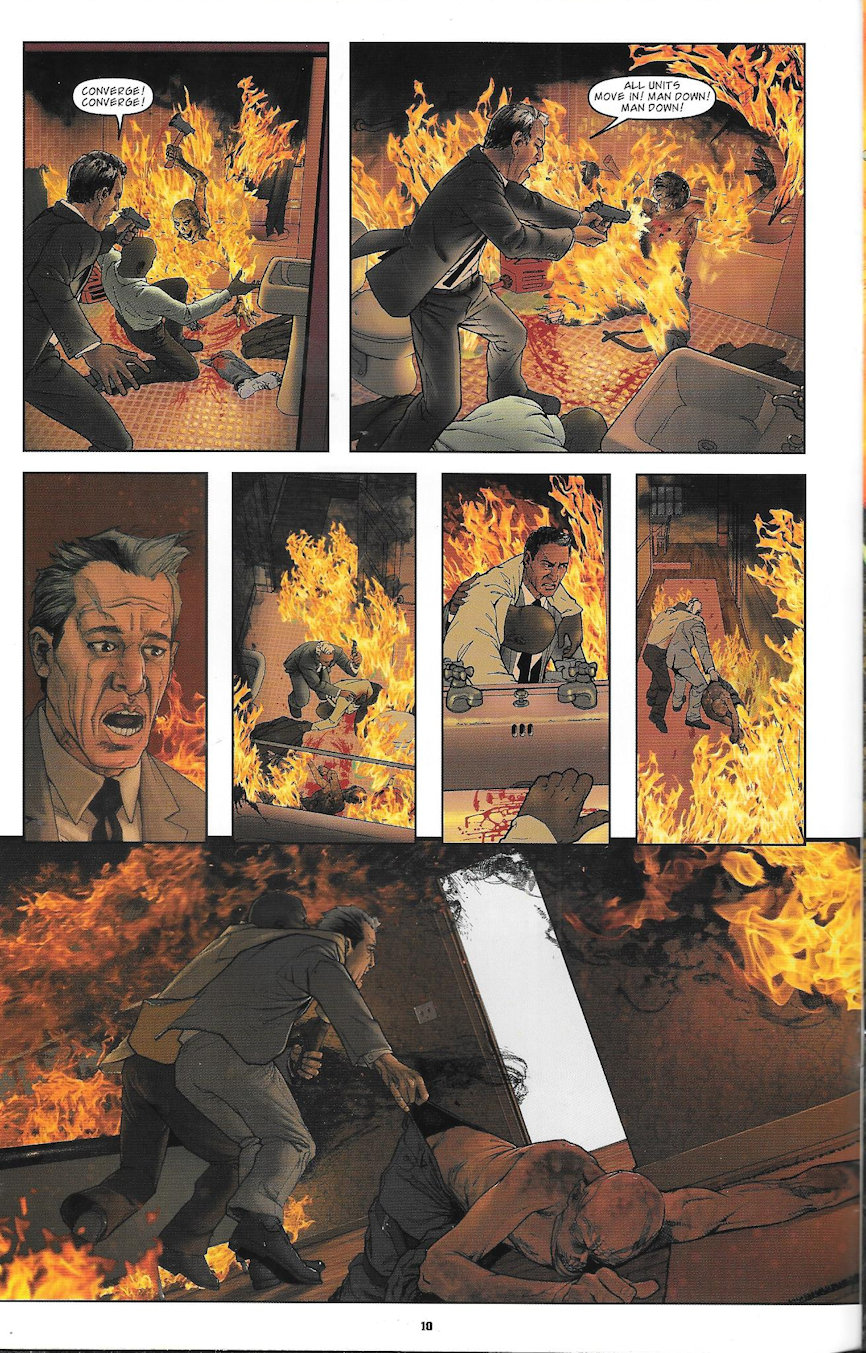 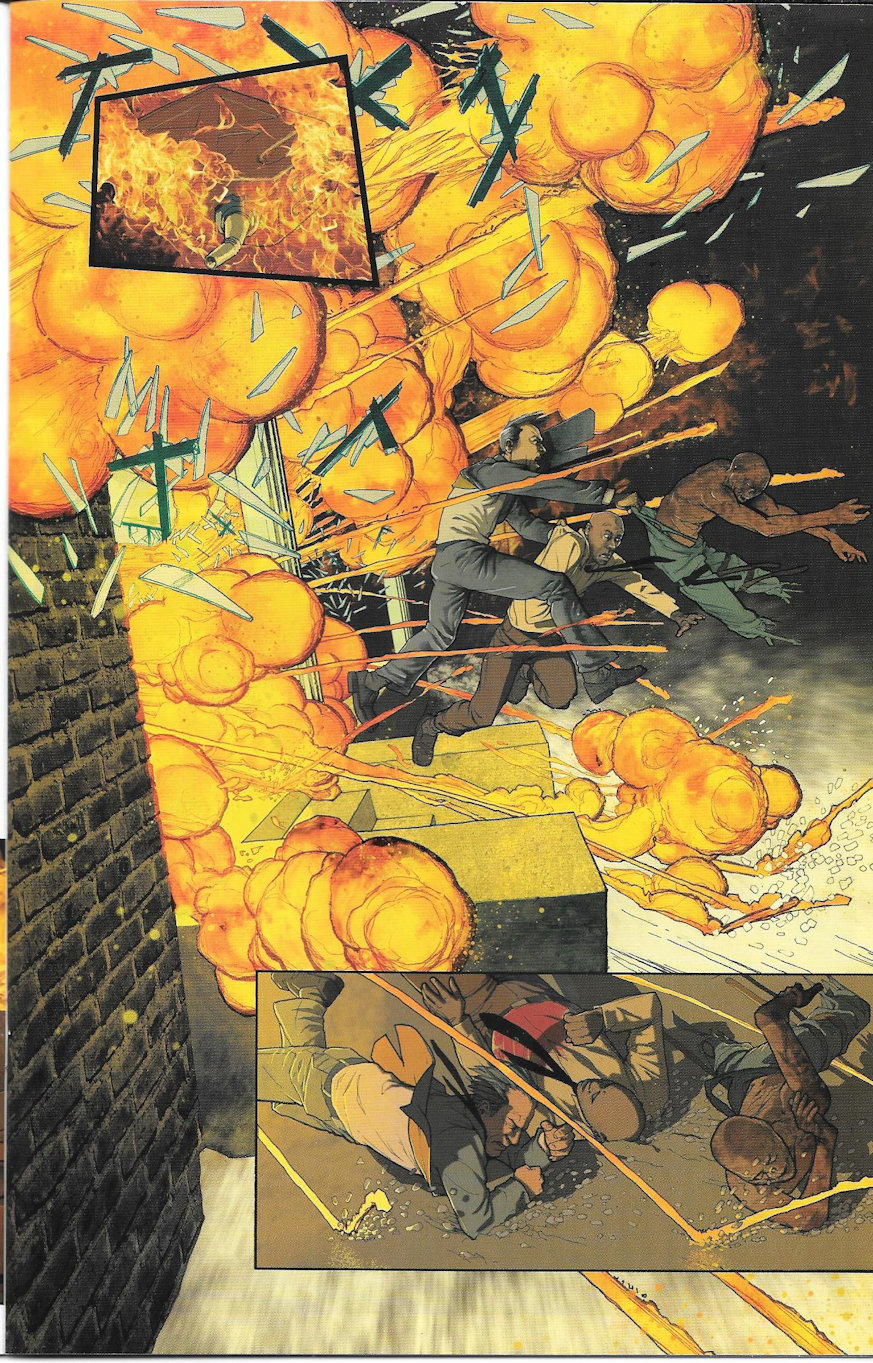 Mal gets fricasseed, but Dew Phillips is able to pull him from the burning house along with (improbably) the man who lit the fire. Yeah, not buying it either. Not unless Dew has been eating double the daily required amount of Flintstone chewables. 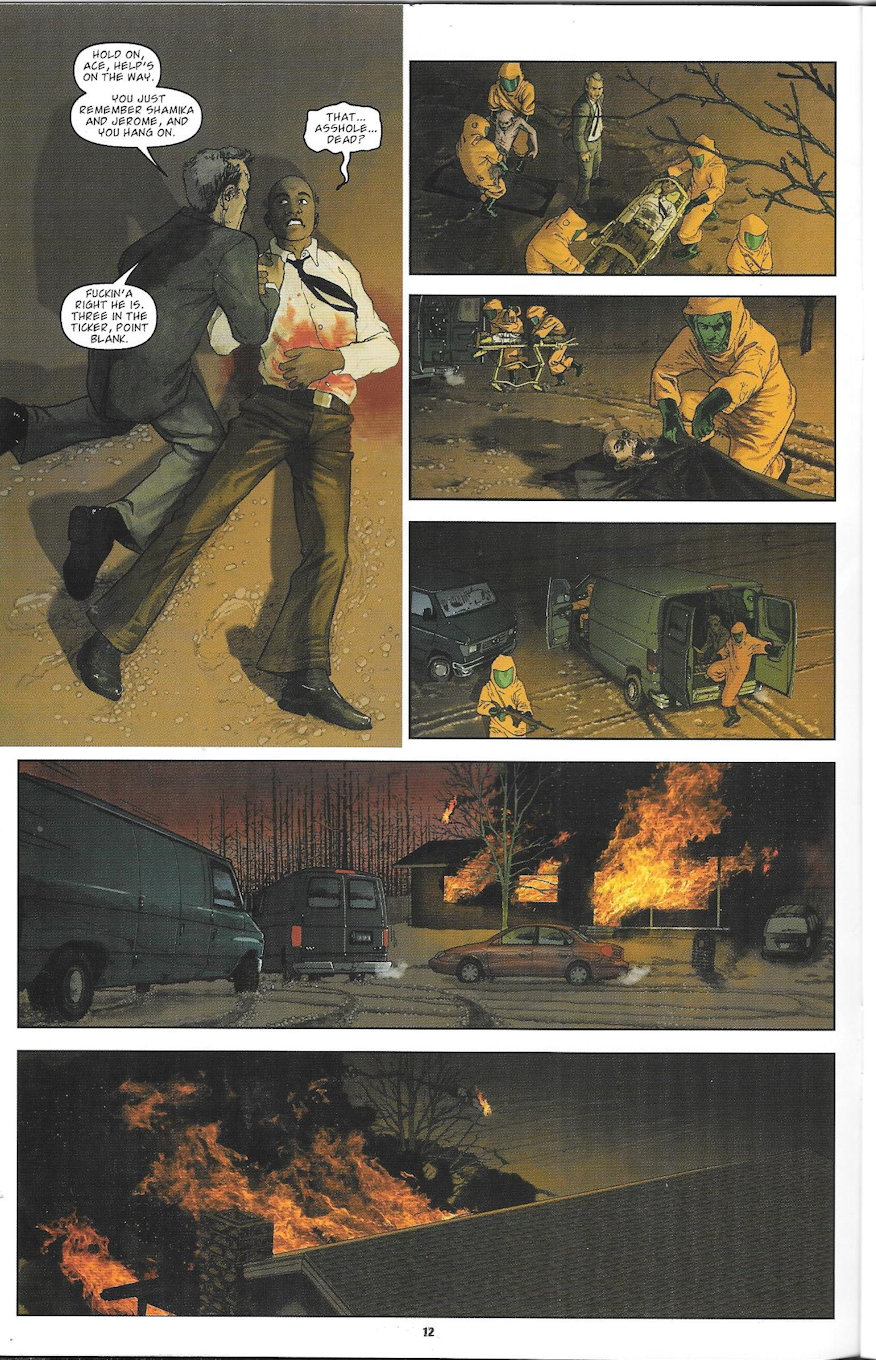 Then we transition to the guy I sense will be the prime protagonist of the series, Perry Dawsey. Dawsey is a former footballer who now appears to have contracted the virus. How? No fricken clue. 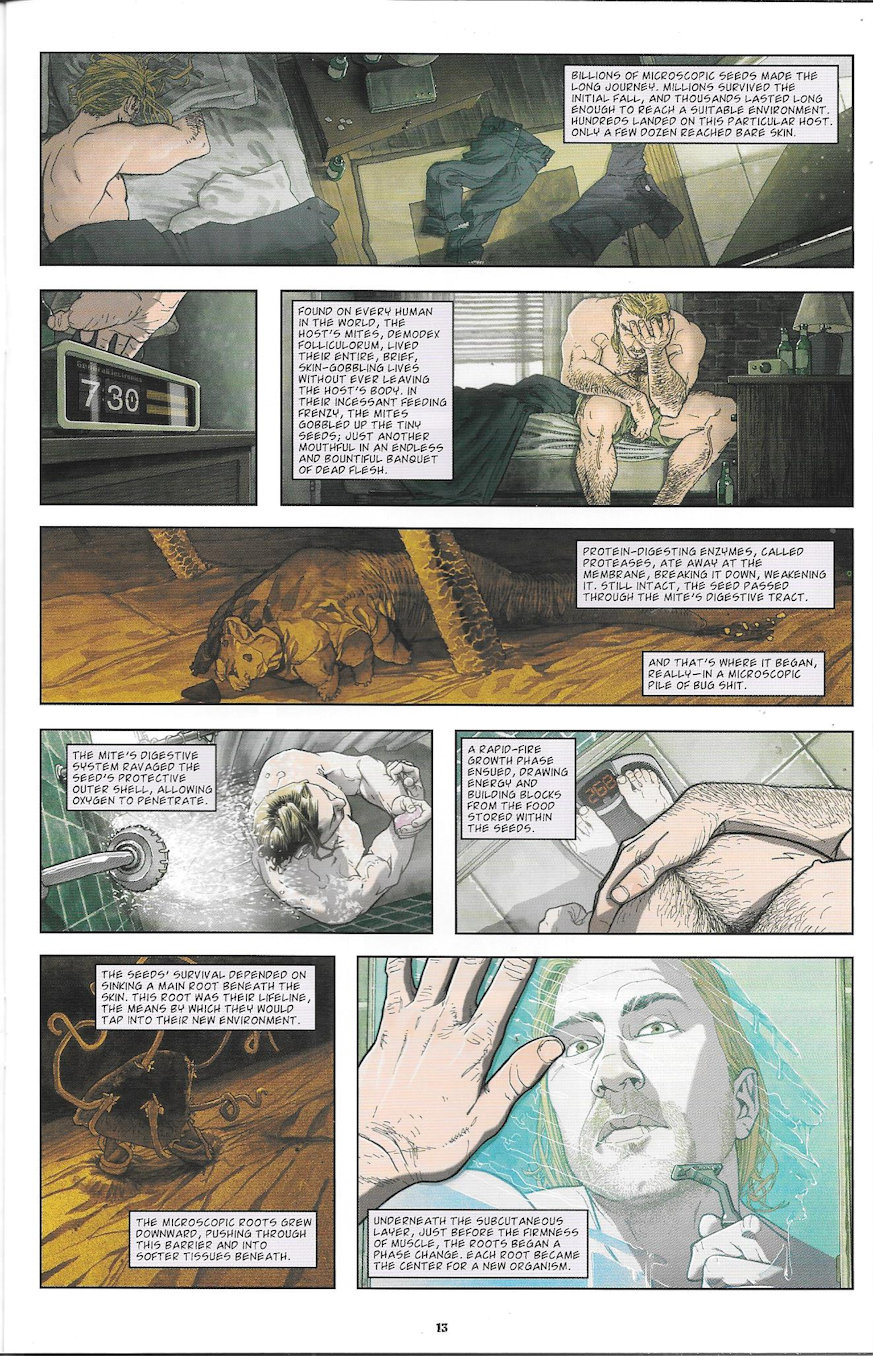 That’s where another of the book’s huge failings is, it doesn’t show a clear chain of infection. The audience is left to flounder, imagining all kinds of scenarios as to how things have played out with no confirmation. Wouldn’t it have been nicer to show how Dawsey ended up in danger? 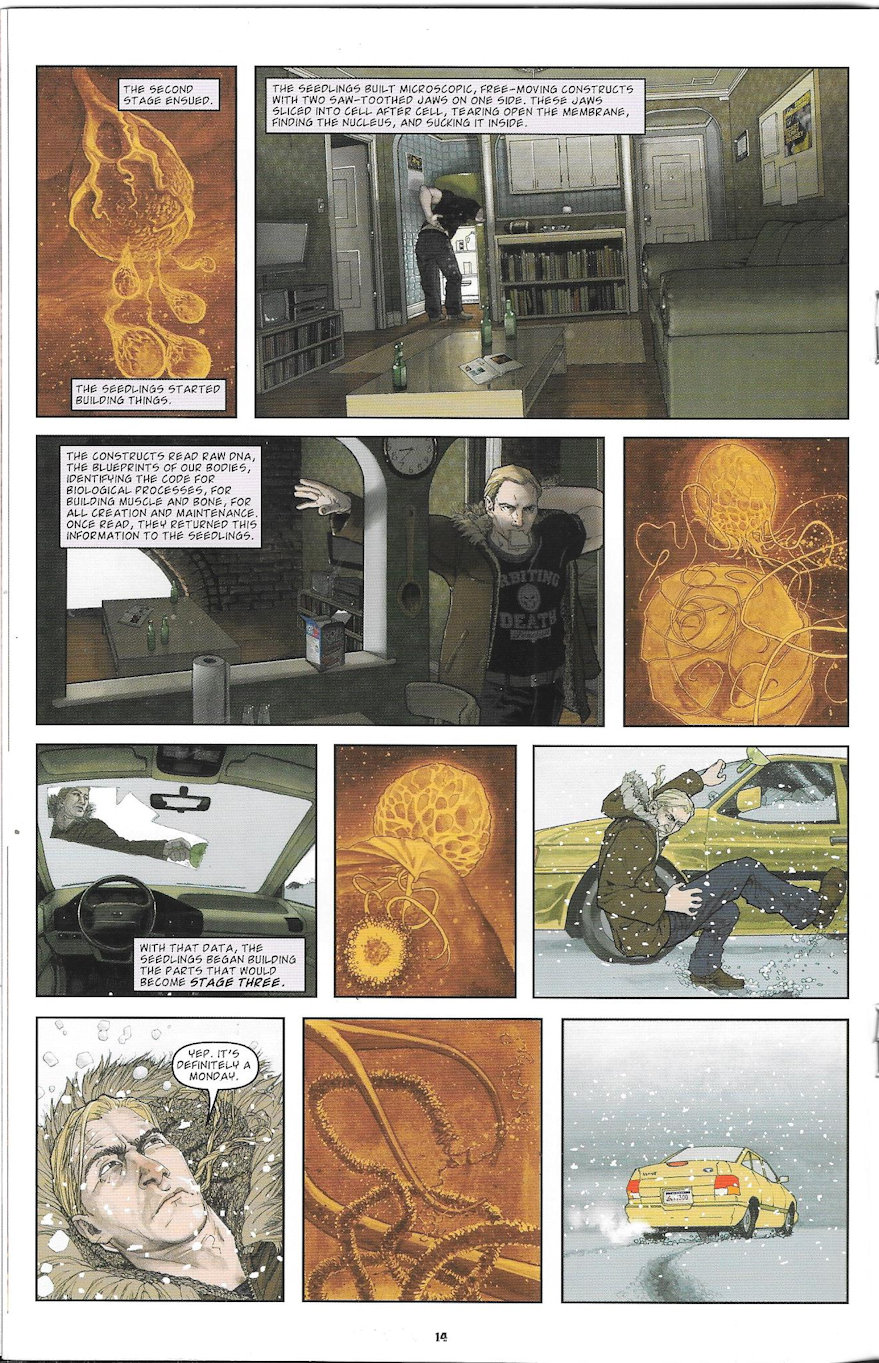 While Dawsey gets more virulent, Dew checks in with his Captain while waiting on his partner to come up for air. 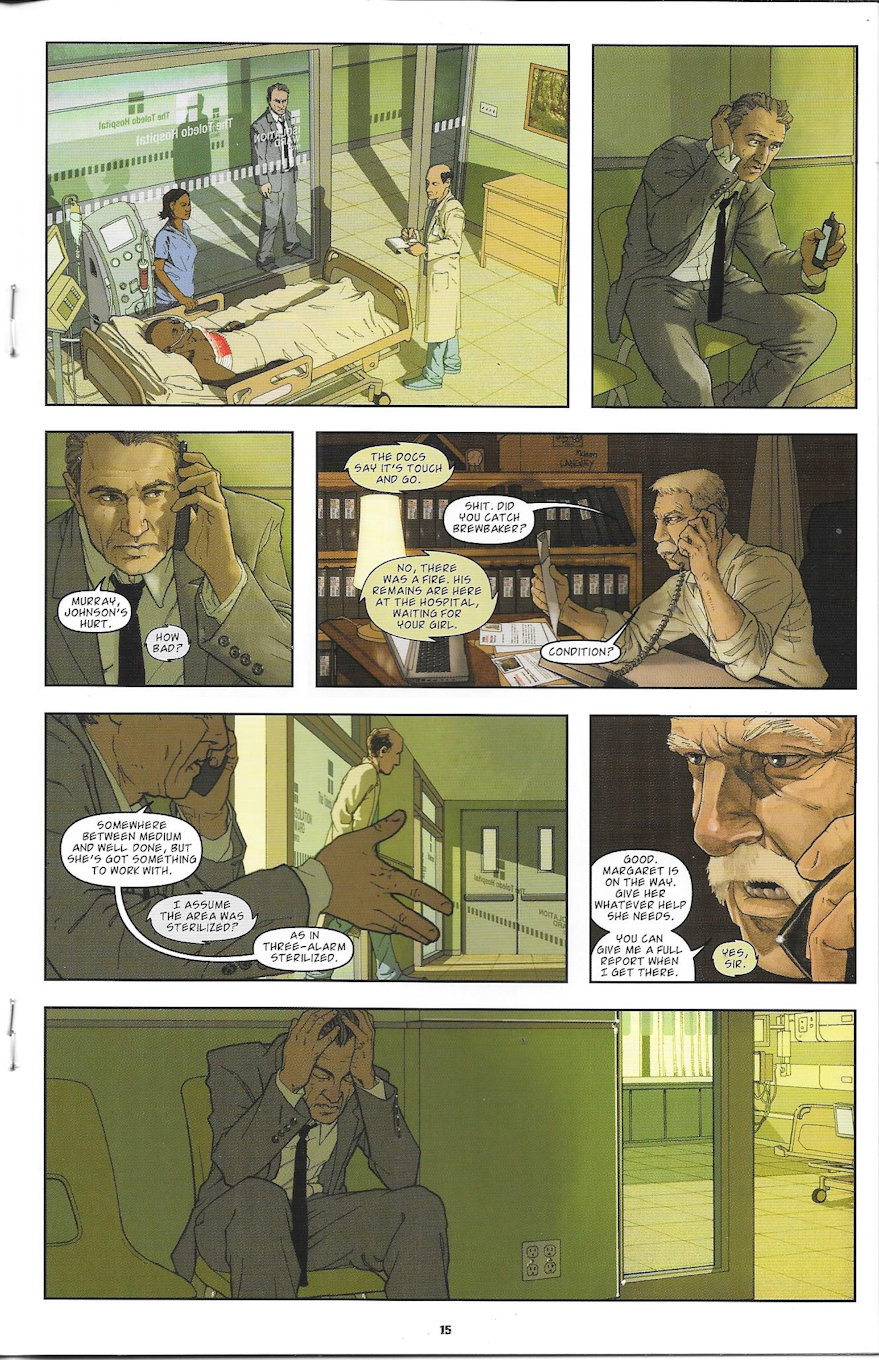 And then was have two pages of the President organizing a task force and I find myself wishing we had this kind of quick response on Covid-19, because within hours, the White House organizes a task force, has a meeting, and isolates those with potential infections. Instead of...you know...tweeting and playing two rounds of golf. 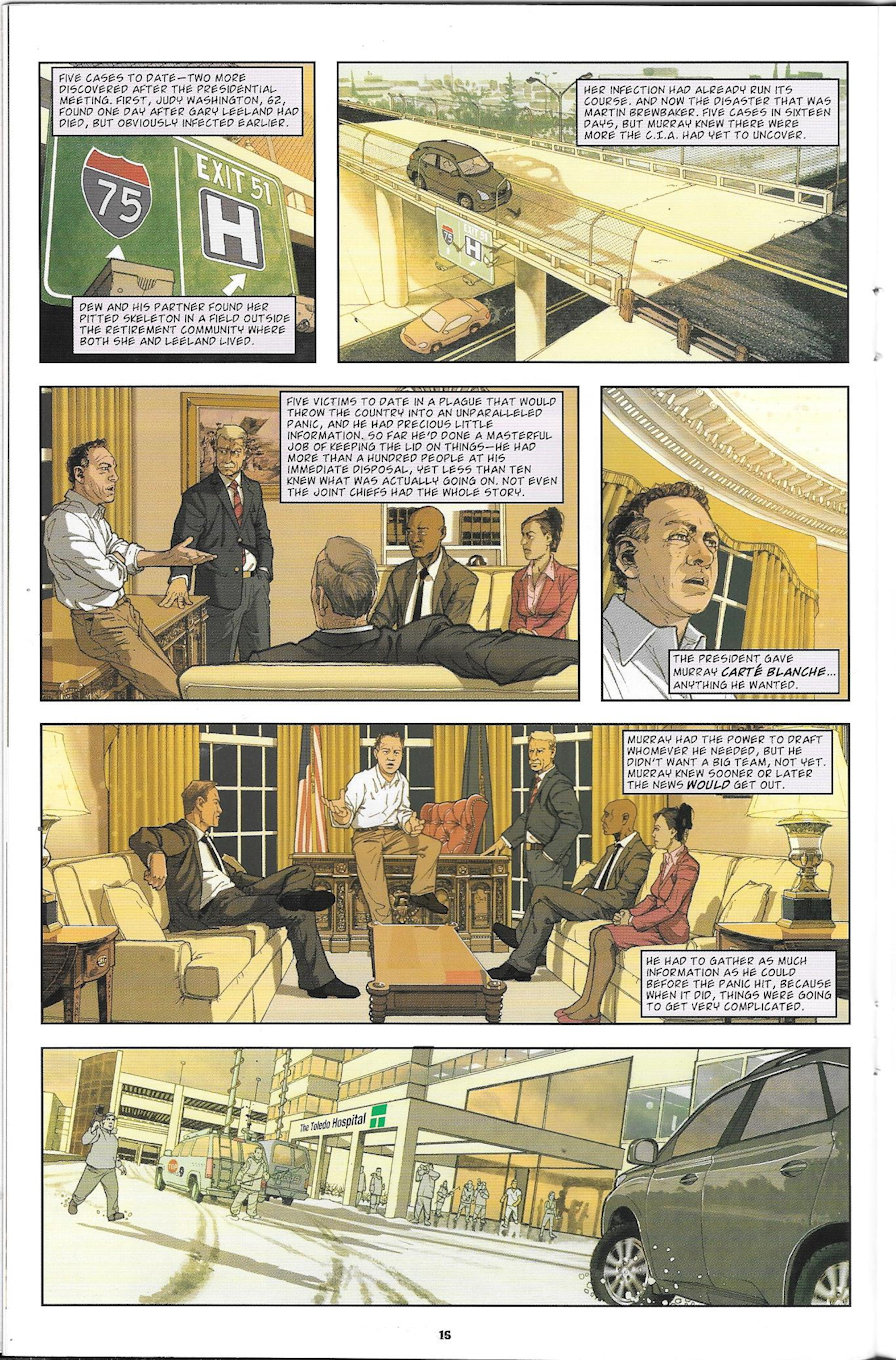 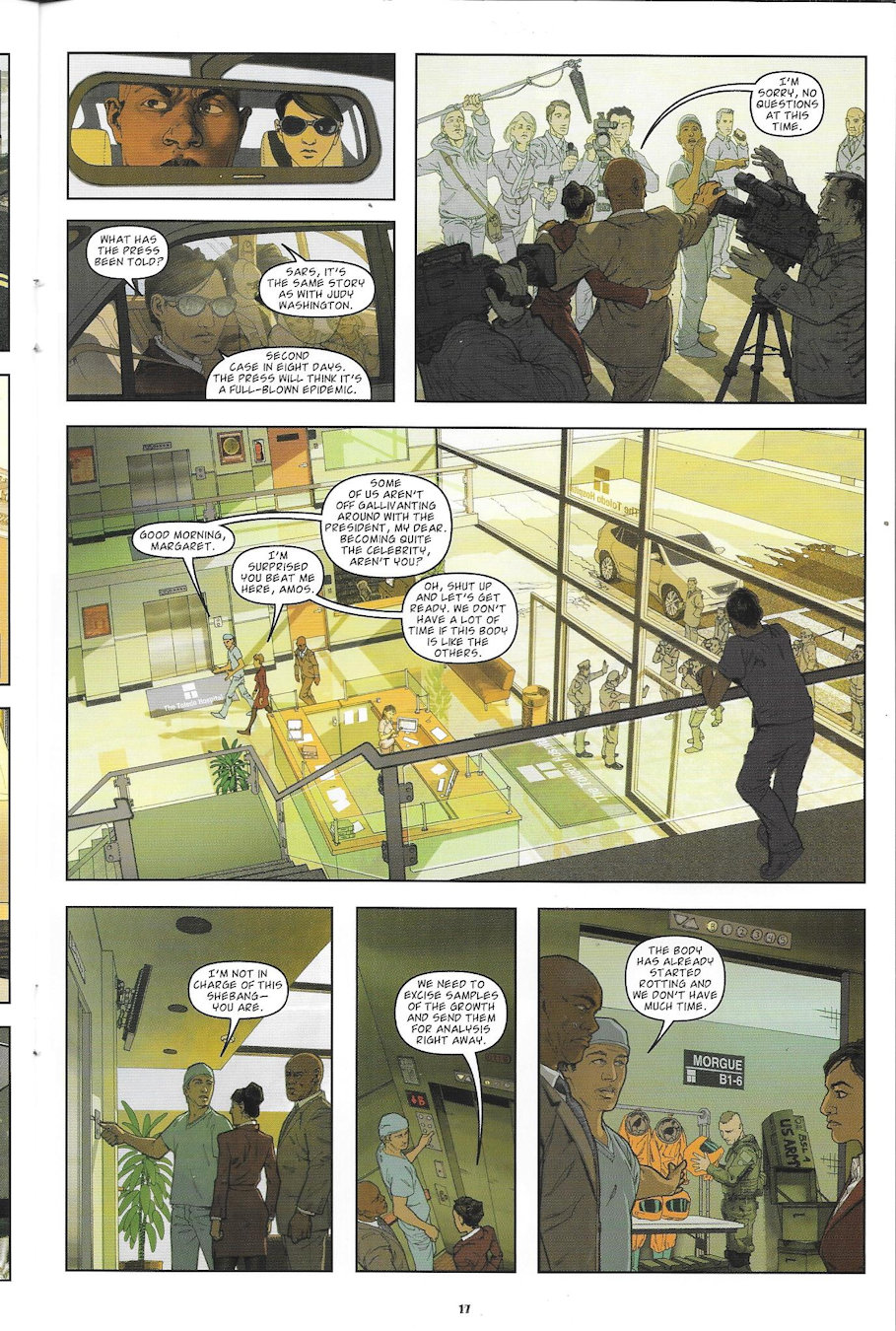 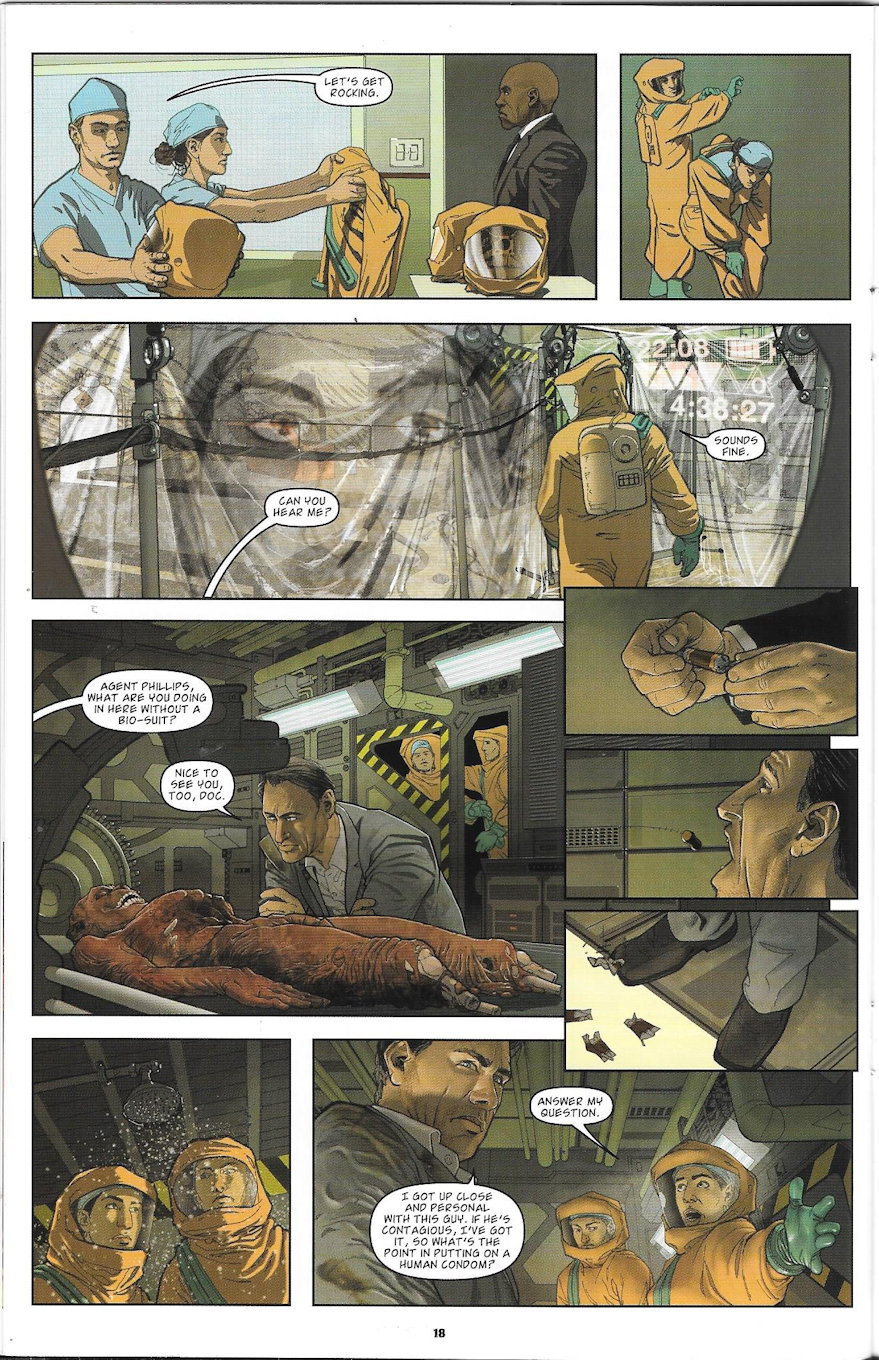 …they are surprised to find Detective Dew Phillips hanging over the body without a containment suit on.

And right here, for me, is where the story goes off the rails. I find it unlikely that a government task force facing a virulent agent of global pandemic proportions would be so blasé about securing the area around a potentially infection corpse. And even if they did, Dew would be slapped into high level quarantine so quick your mask would fly off. I lost a bunch of interest here, since the story stopped respecting the audience.

But then again...Covid-19...so maybe so. Maybe it violates Dew's rights to keep him from infecting himself further. Stupid reality. 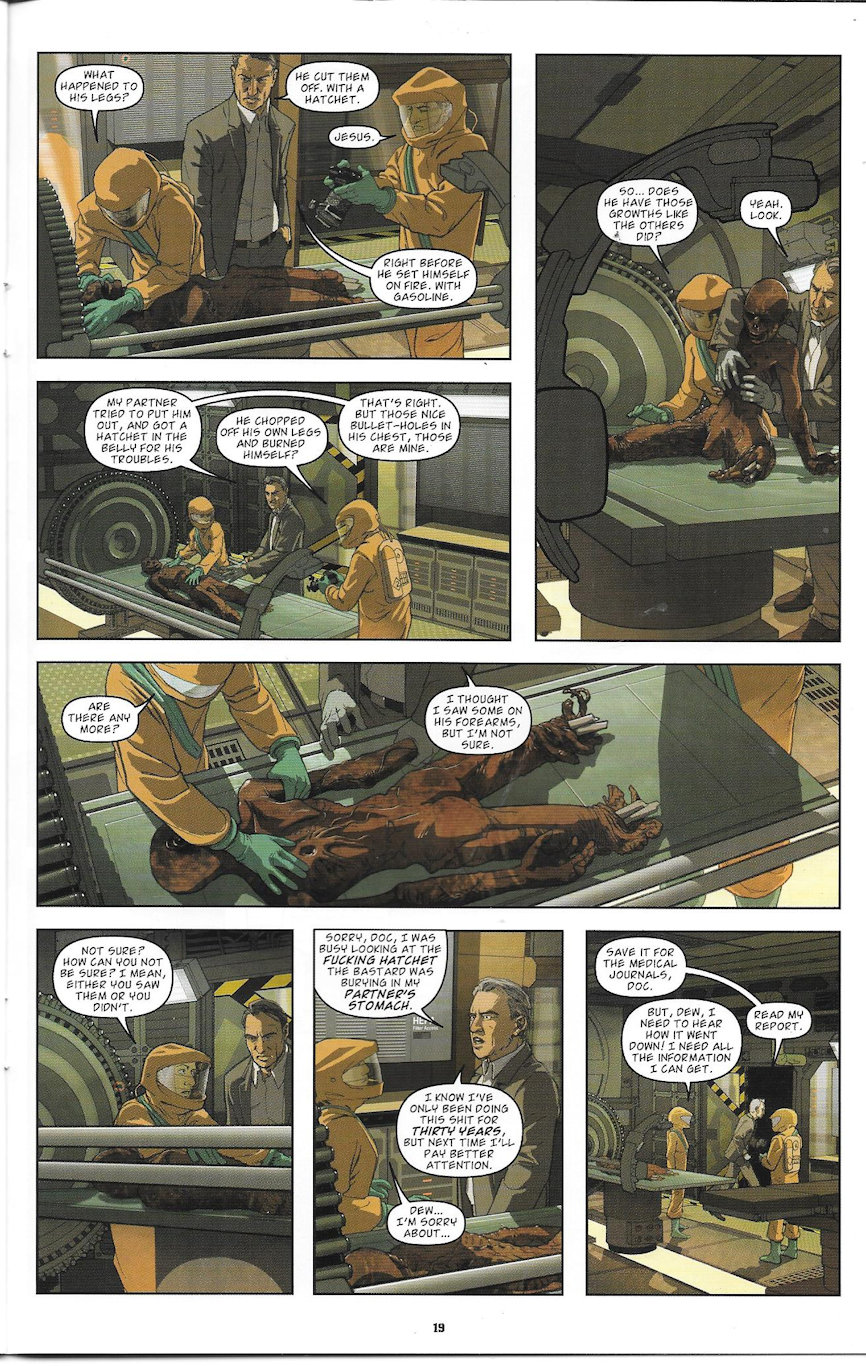 Then we head back for two pages of Dawsey realizing his symptoms are getting worse and he’s just “living his life.” No social distancing, no going in to see the doctors. Sure he thinks it’s spider bites or whatever. Not buying it. 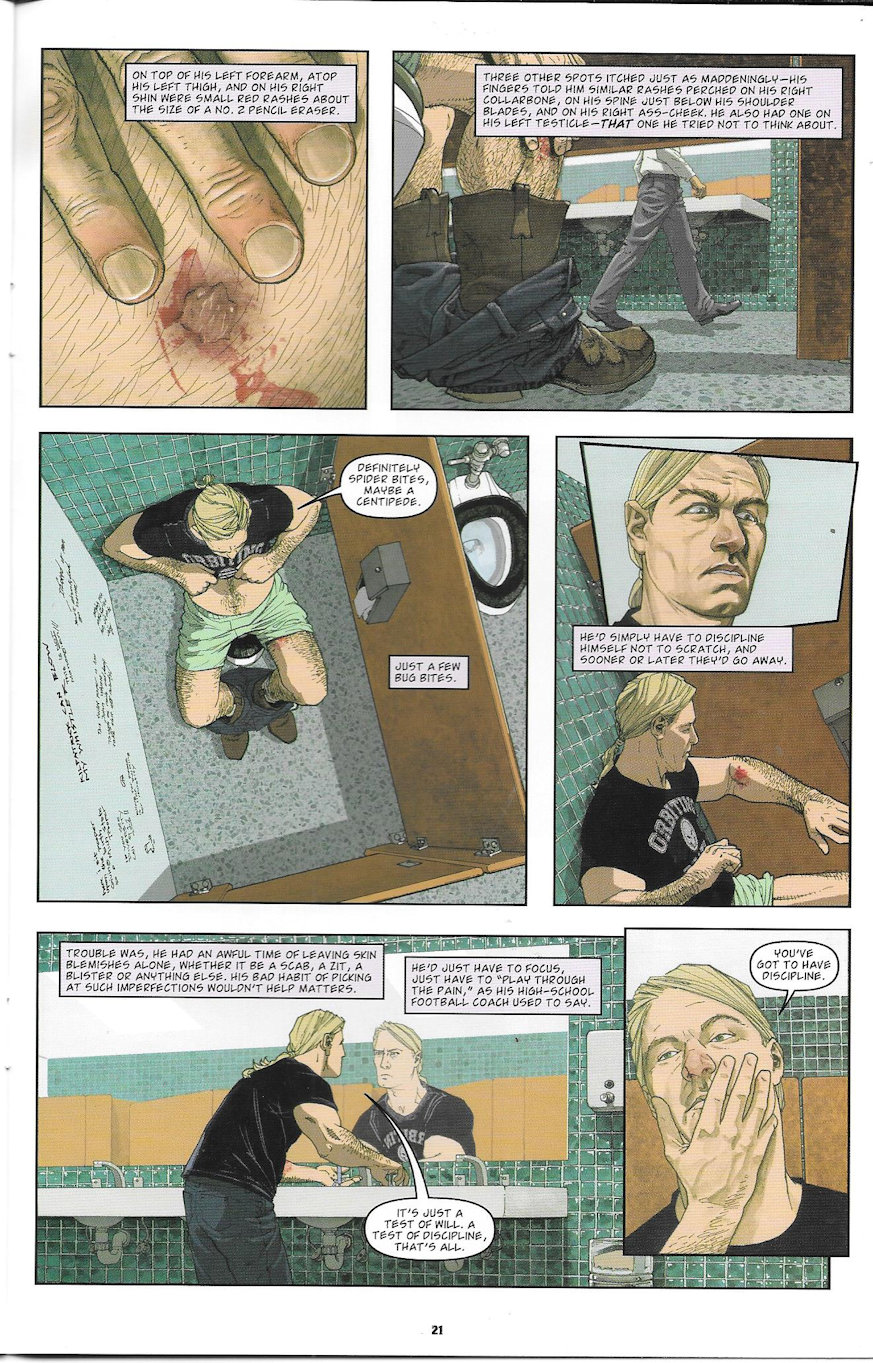 Then a page of Dew’s supervisor talking shit about him and I realize Dew is CIA, not local PD. Okay, story. If you want me not to make assumptions, yah gotta say. 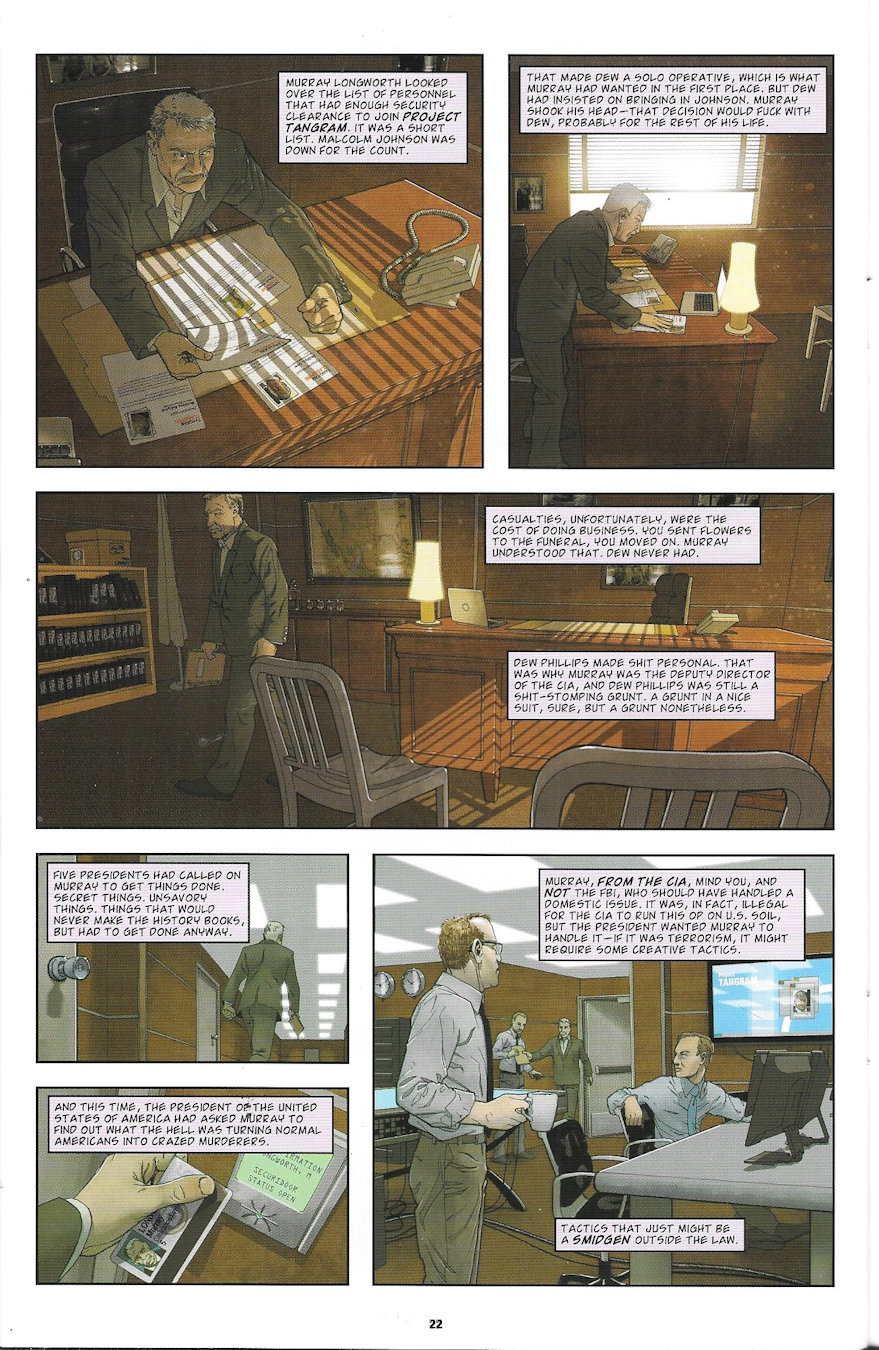 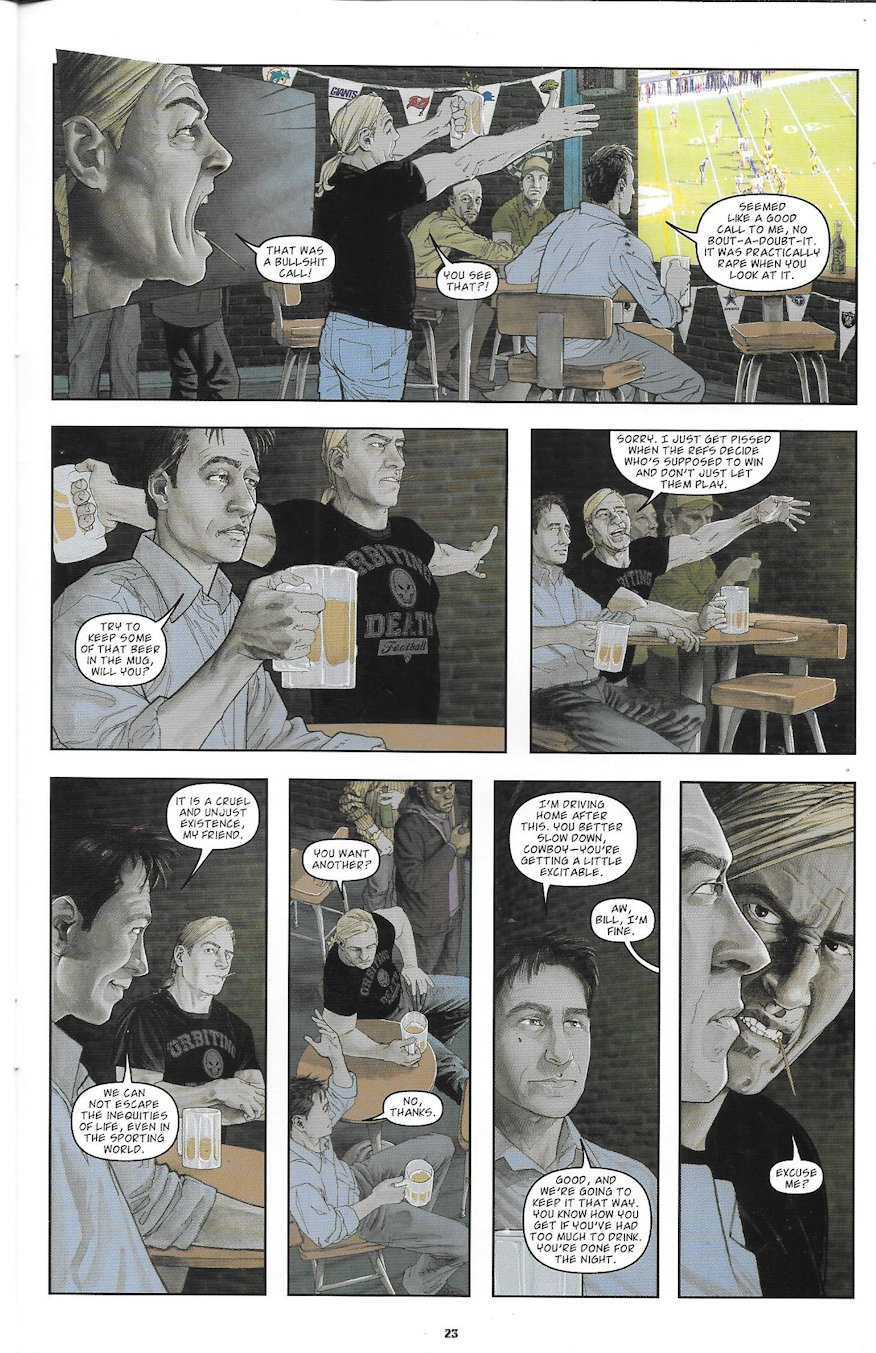 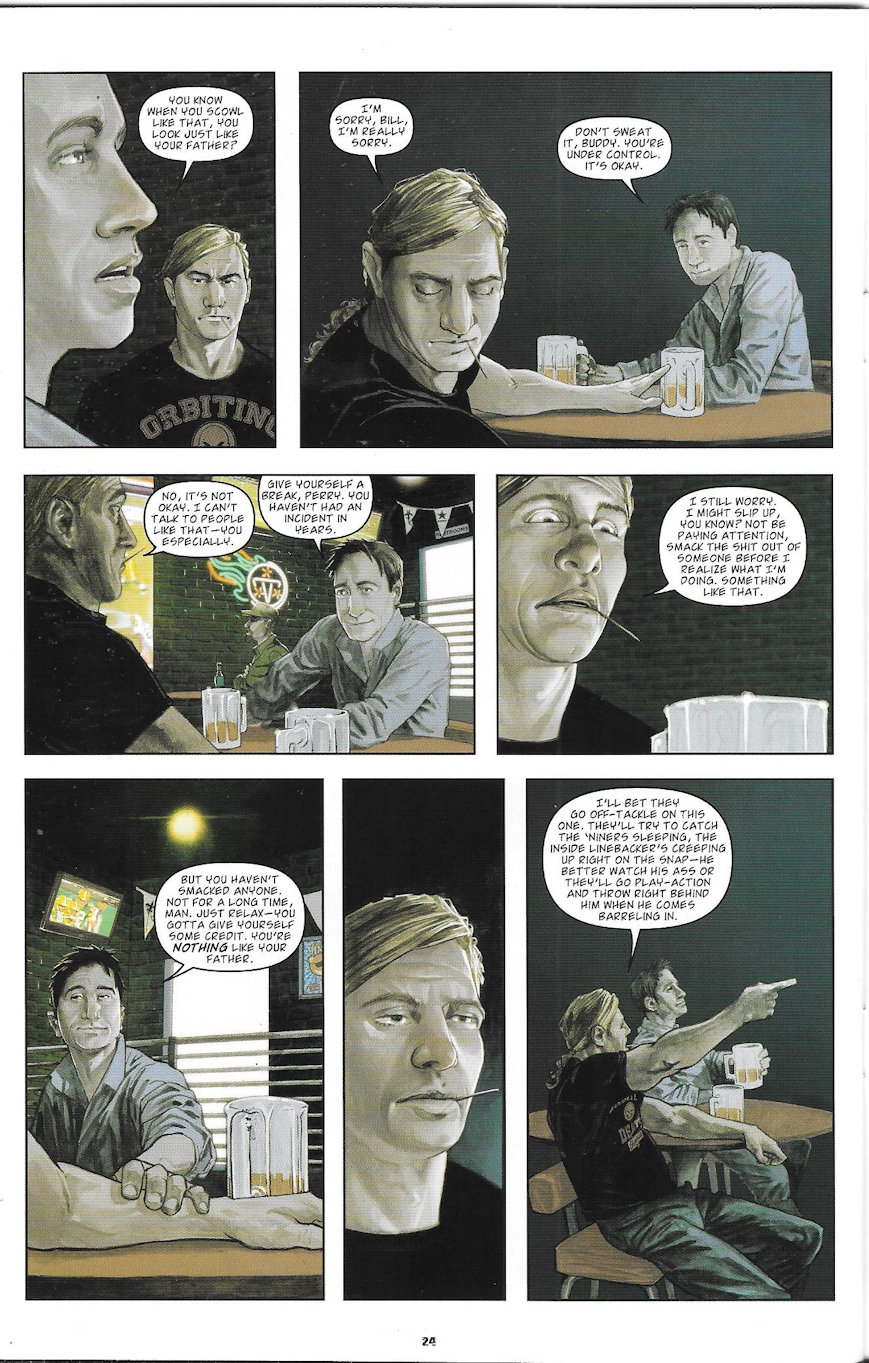 And then we get these bottom two panels of this page where….WHAT? is? Happening?... Are those our two CDC-type scientists having sex while wearing their full body containment suits? How does that even work? And WHY in Cthulhu’s name would scientists do this in a fricken HOT BOX? They are risking infection if they break containment and I don’t even know how they could do things in the suits that would BE the kind of physical contact that “O Face” implies. 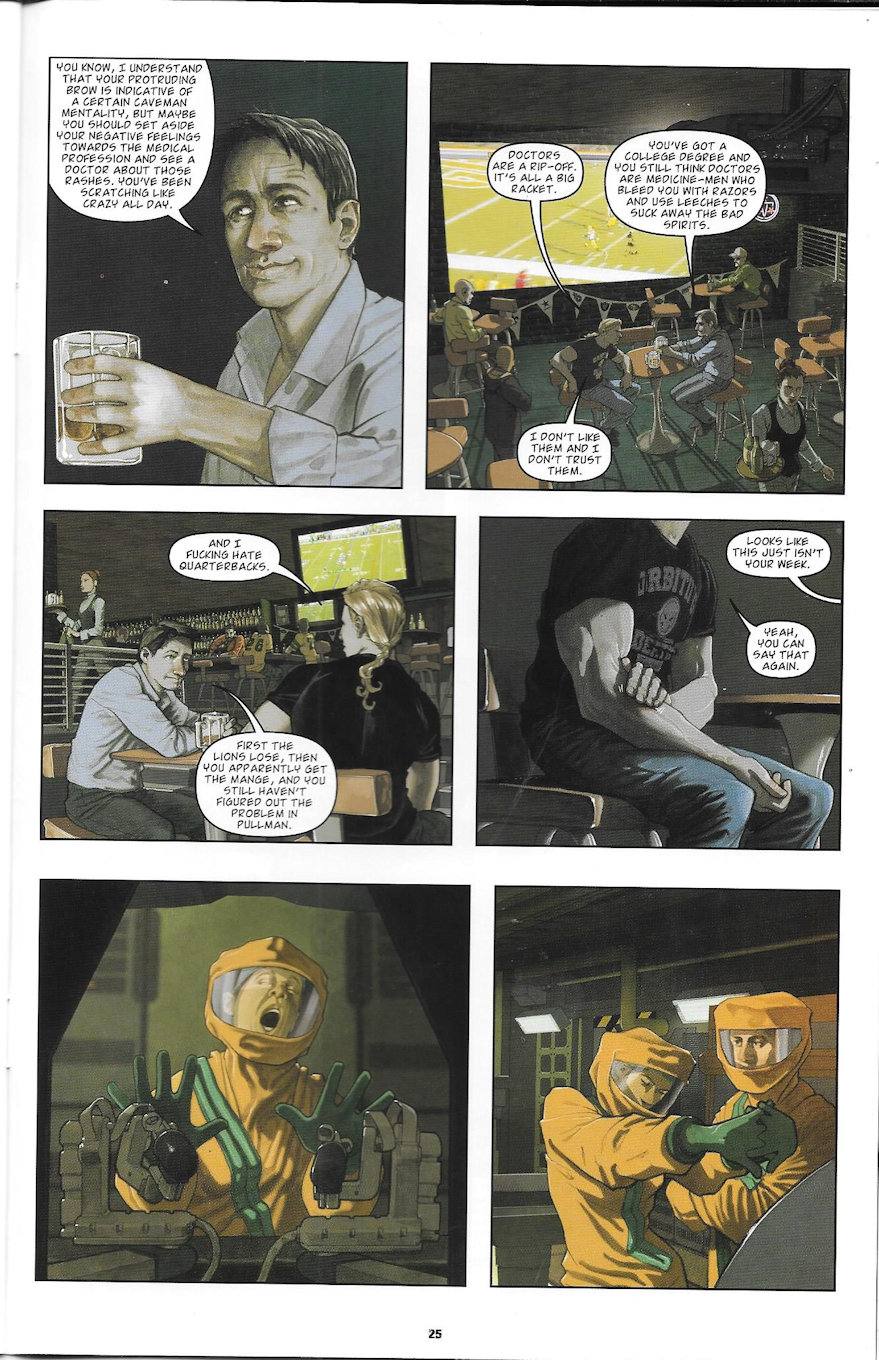 What I’m saying is the dumb book got even dumber at the end. 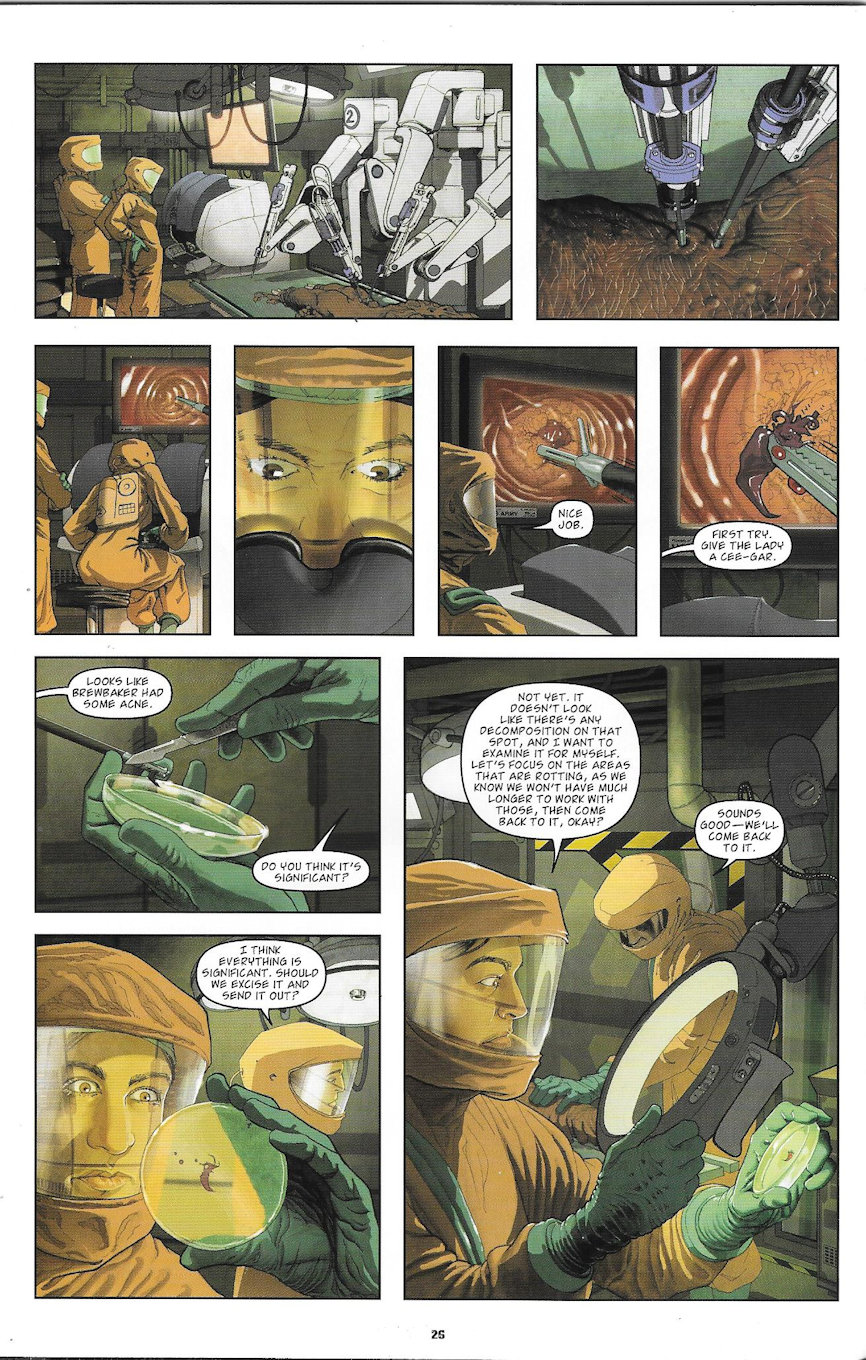 Then two pages of the scientists getting a sample and the book ends, never to get picked up again. 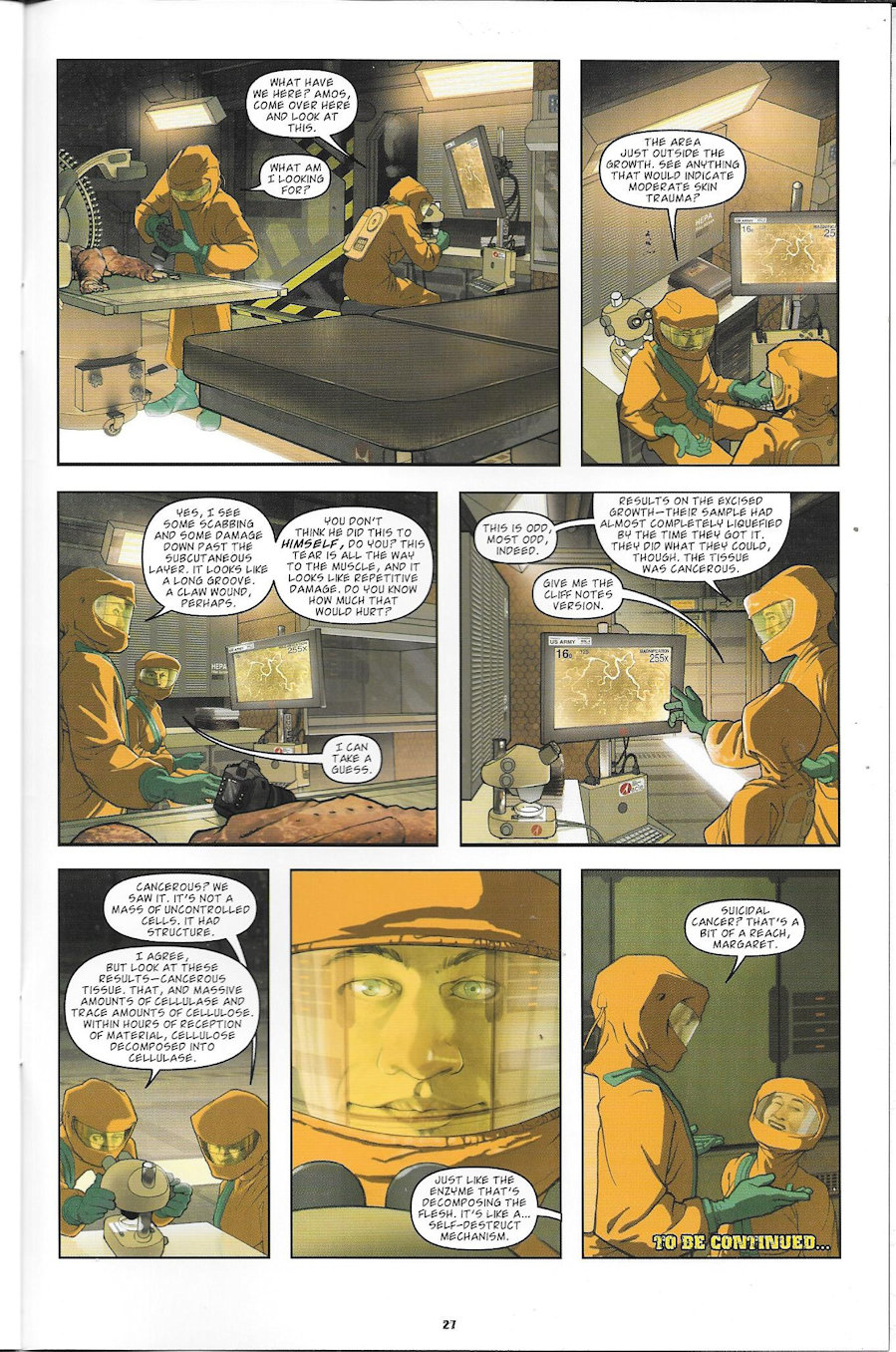 So I hated this. The book had characters acting completely out of character (scientists acting dumber than…well, me for one, by breaking quarantine and isolation procedures). In addition, the plot doesn’t have a clear thread and all the strings it is leaving don’t look to be getting tied up, ever. And that’s not from cancellation, either. They just appear to be dropping things like the cold open and never coming back around to their significance.

However, if YOU liked the story, you can pick up Sigler’s books on Amazon. They have generally good reviews although I wouldn’t find them to my taste if this book is any indication of their quality.

Posted by SonOfCthulhu at 7:52 PM