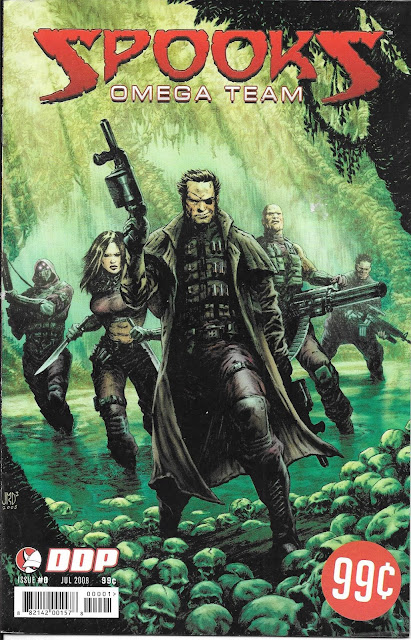 A quarter’s worth of story for only 99 cents!

Spooks Omega Team feels like something I’ve encountered before, only...it is something you look at briefly and not at any depth. Created by Ryan Schifrin with story credit being given to Larry Hama of G.I. Joe fame, Spooks Omega Team takes a squad of high-tech, ammunition-heavy elite soldiers and pits them up against supernatural horrors of world-destroying caliber. If you’re thinking G.I. Joe verses the Cthulhu Mythos, you might be pretty close.

In name, the group reminds me of what I envisioned the modern splinter rules for Call of Cthulhu called Delta Green would create, but in actuality that game world is more akin to the X-Files.

And I have to admit, the idea could provide diverting stories, if done with enough panache to get beyond my usual cynicism.

As for the creator of all this, the guy by the name of Ryan Schifrin, he has written a few horror movie scripts that ended up as cheap horror movies, the biggest being one of the ten stories in the Tales of Halloween anthology movie. (Available with Amazon Prime, but I do NOT recommend it.)

Sadly, this issue 0 is too little of anything to tell what the book might be like. Aside from a very brief look at a few two-dimensional cardboard cutouts the book walks around pretending are the main characters, the ending does ALMOST reach the cosmic horror shelf I was looking for it to land on. And with that, I should just push everyone into the story and we can sink or swim while enjoying the nice art by Adam Archer.

We begin with our cliché group of hardened ass-kickers swamp boating it into some remote part of the Amazon loaded with enough guns to end WWIII. 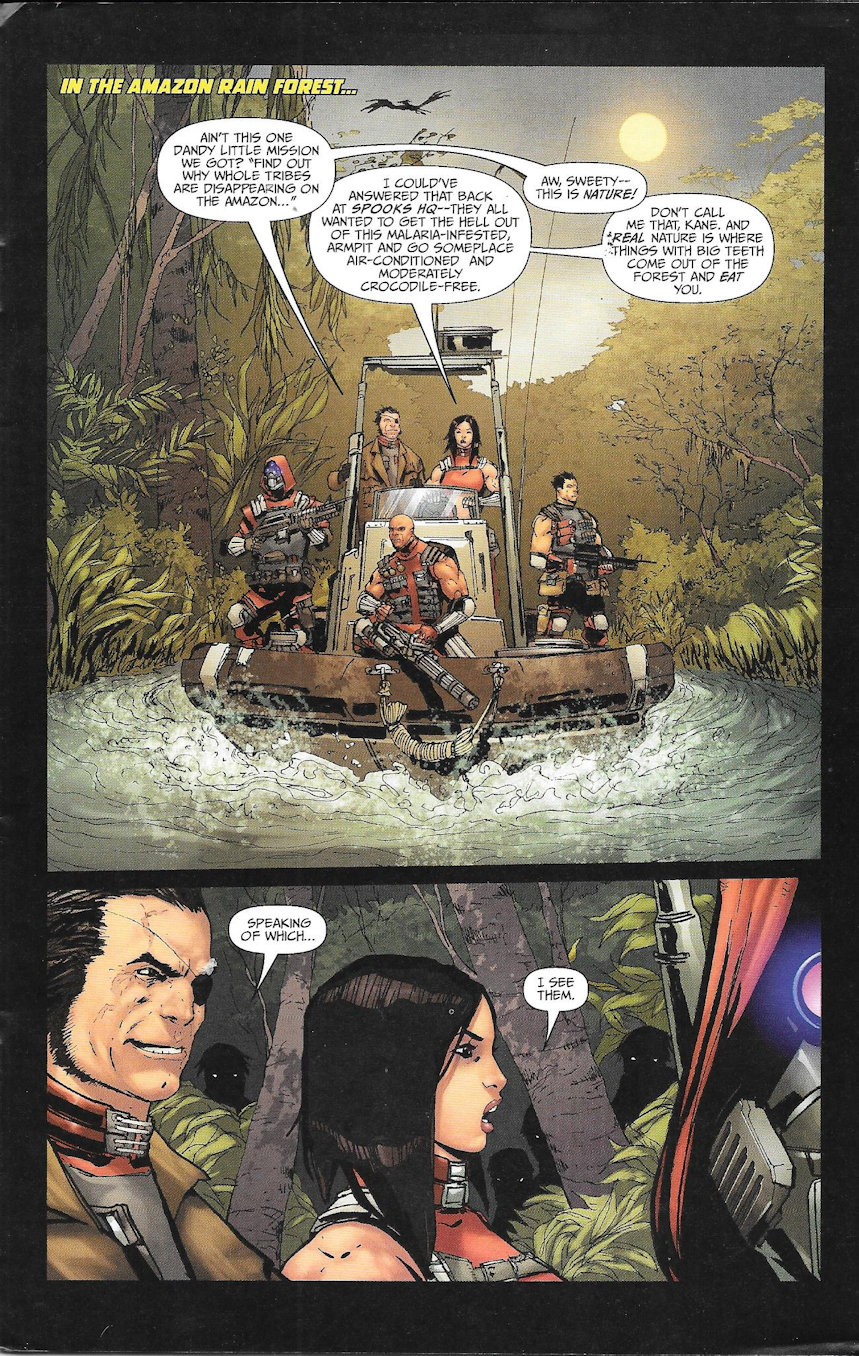 They are set upon by zombie tribesmen wielding automatic rifles, led by an evil cultist shaman. In true G.I. Joe fashion, none of the shots come near our heroes, giving them a chance to return fire. 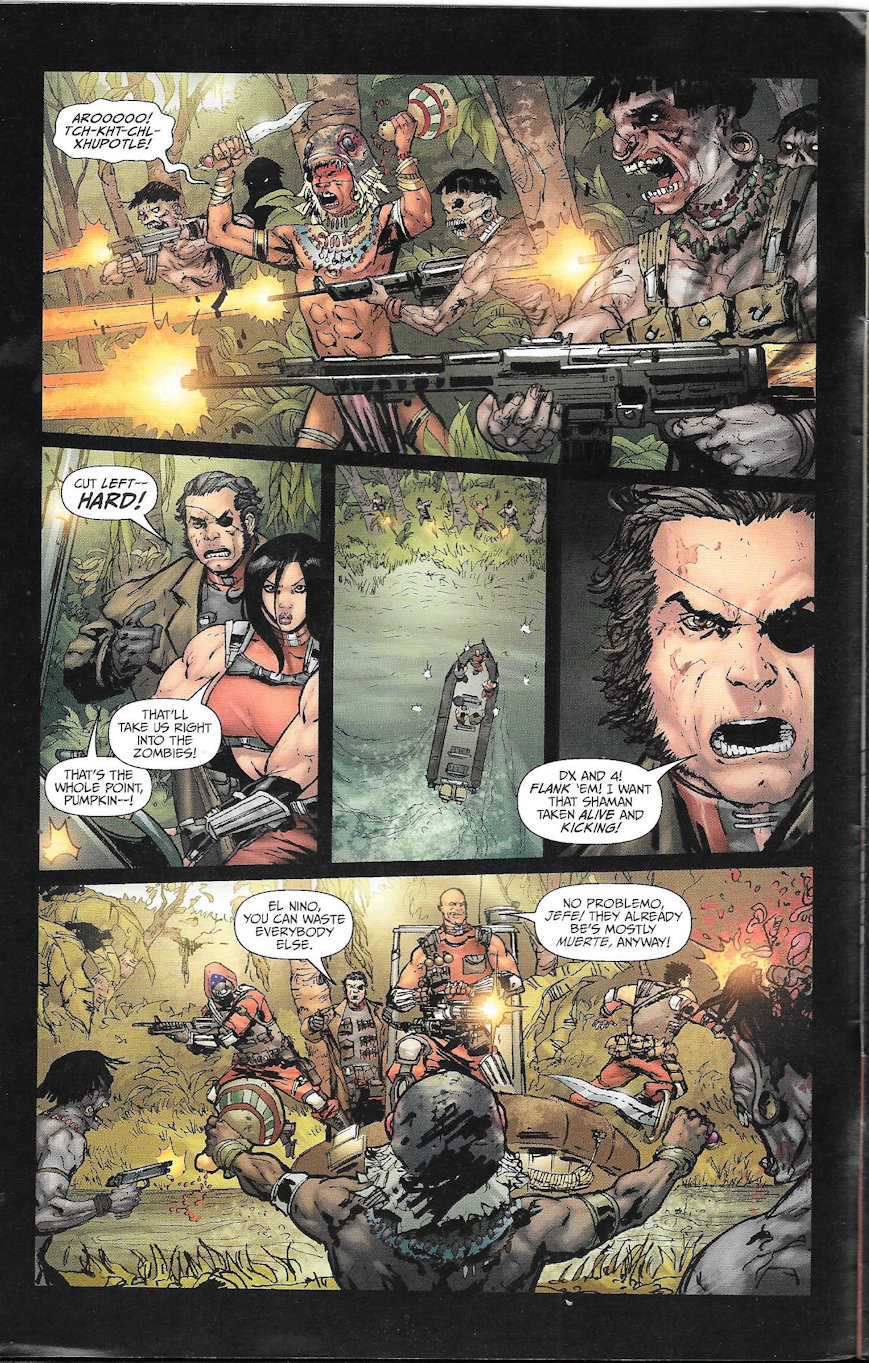 …and UNLIKE G.I. Joe, we get to see some bloody collateral damage on the zombie side of the aisle, as our patented team of super-SEALs take the shaman prisoner. 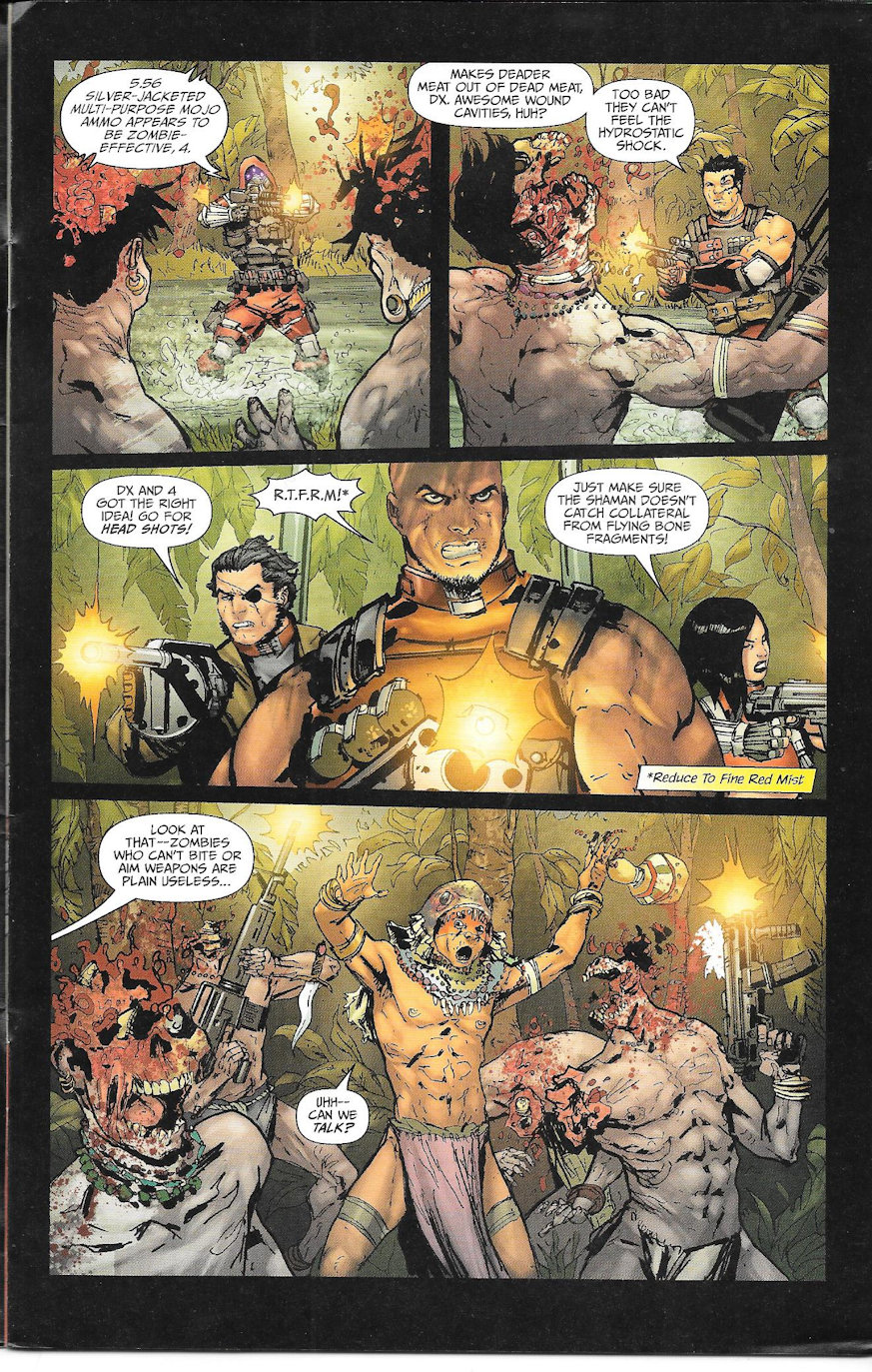 The crazed cultist leads our troop to the local discount Mayan pyramid which has a second one inside it that allowed him to raise up the dead. 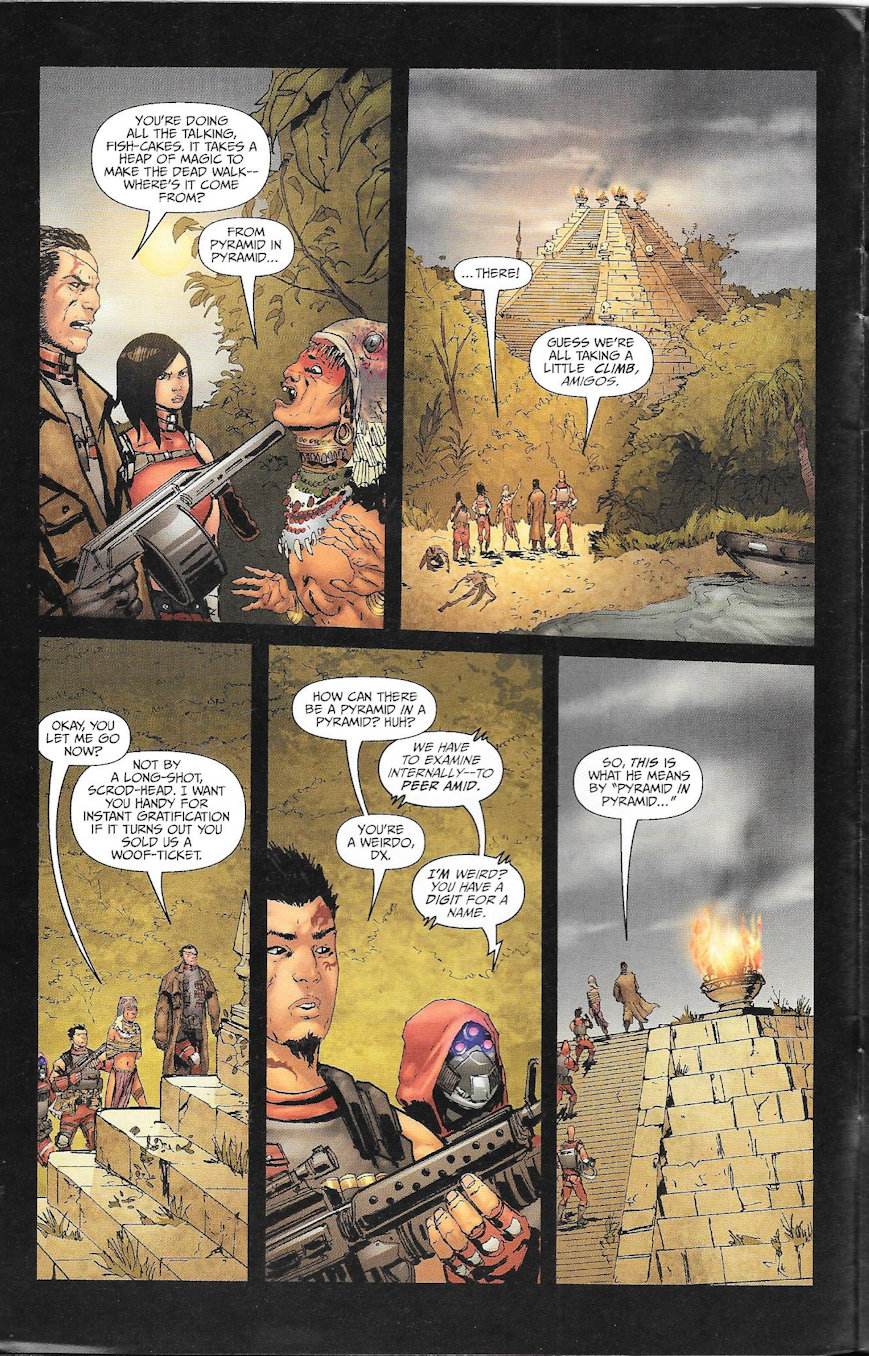 And some fine work by Mr. Archer does this little inversion trick just the right amount of freaky for me. As our shaman gets the boot by discount Nick Fury as a method of prompting him to take point, I am really regretting this book wasn’t given better characters. The art is so nice and…. 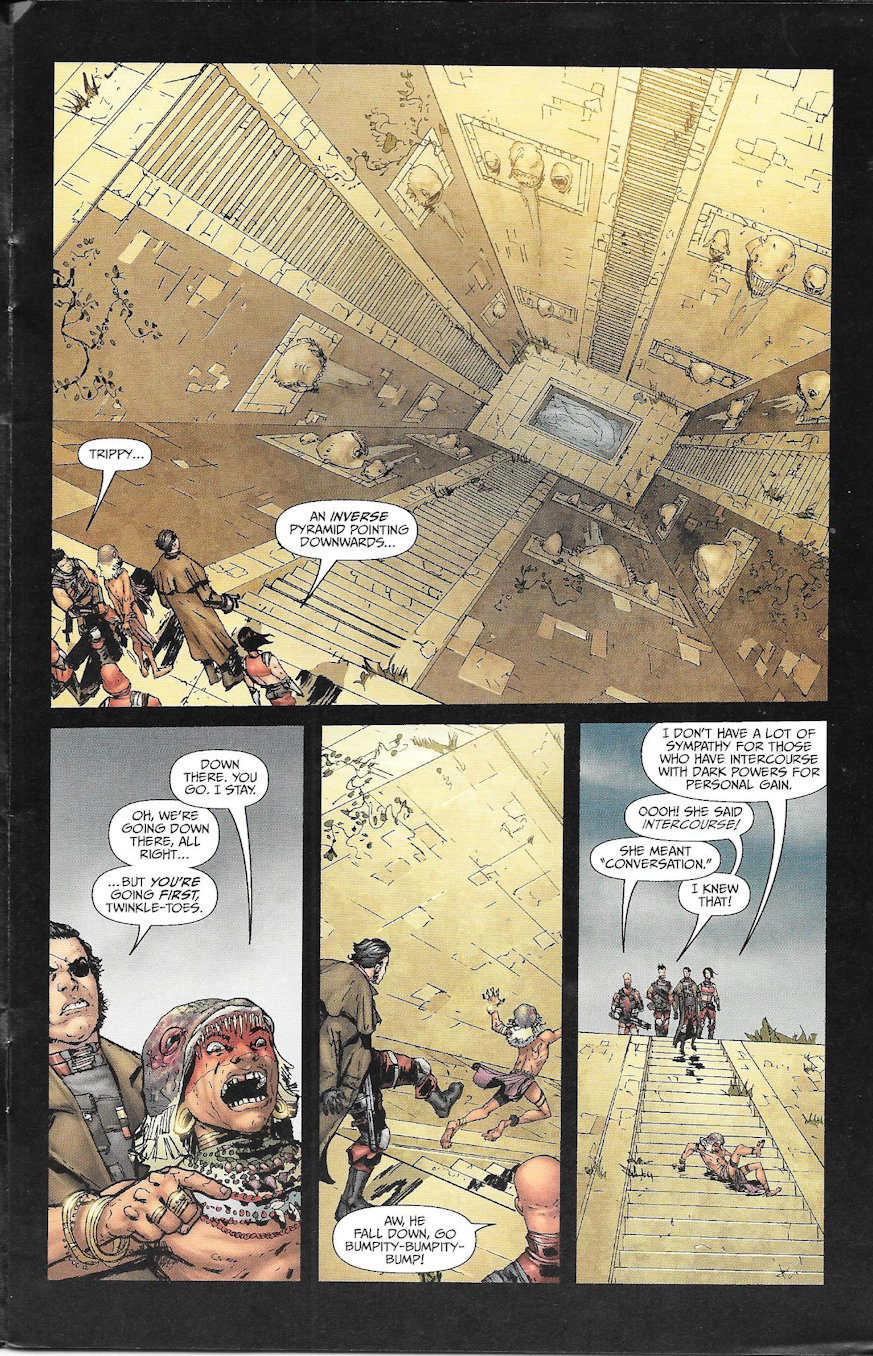 …this weird pyramid premise works for me. Not to mention the book includes… 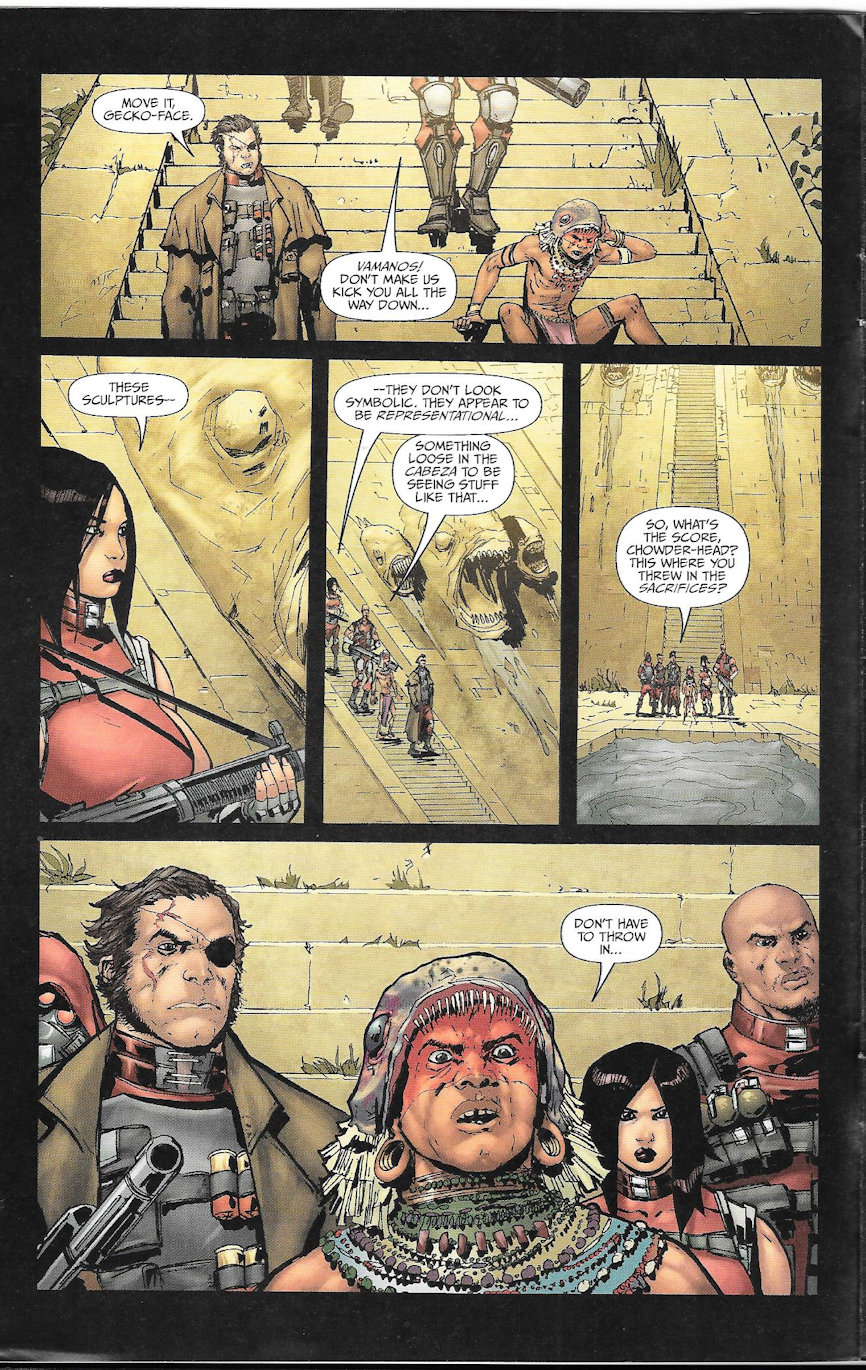 …what can only be described as a Deep One homage that yanks our shaman into the drink faster than our soldiers can lay a finger on the trigger. 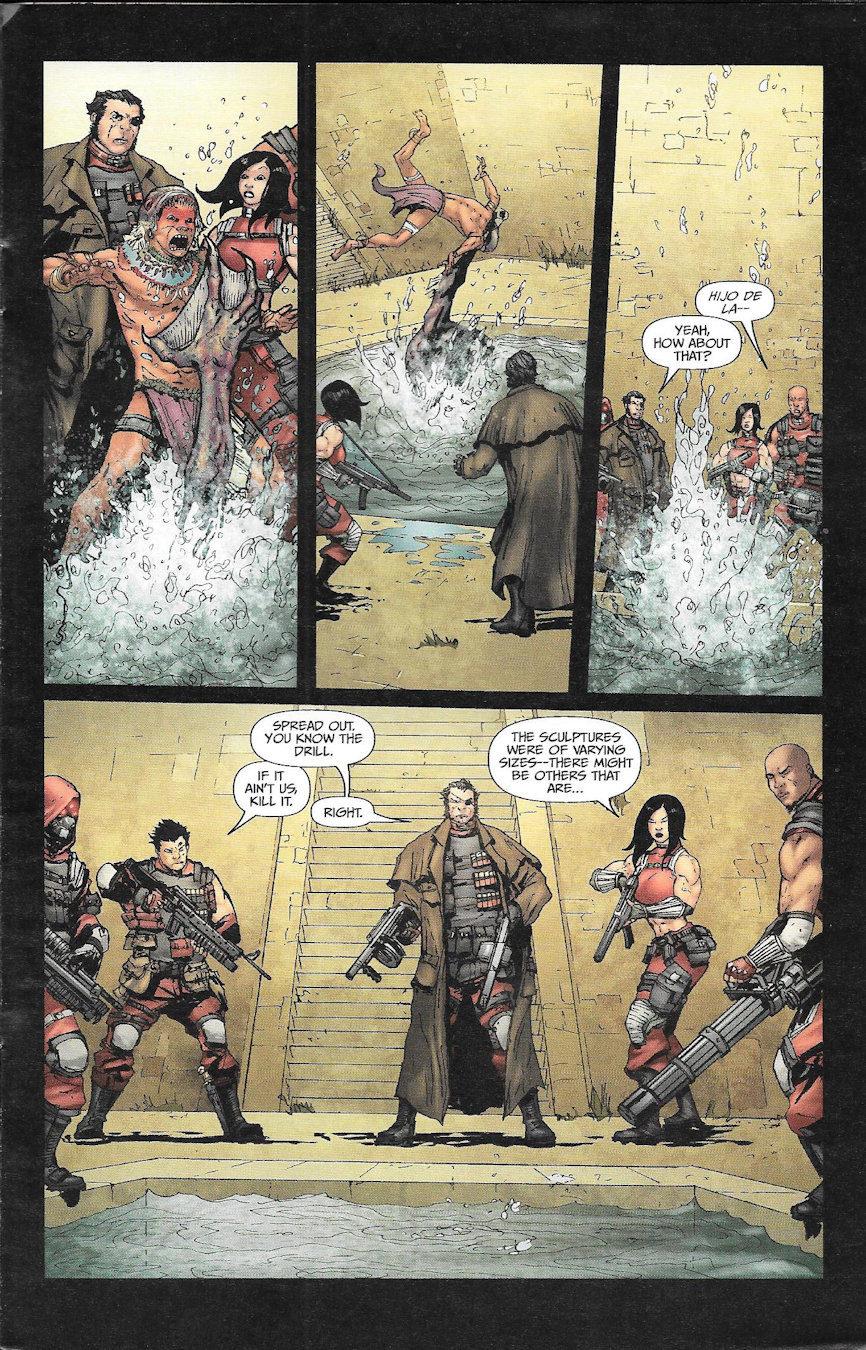 Not to mention the fact that they are not just silent Creatures from the Black Lagoon, but talk too. And asking for “sacrifices” is kinda the definition of creepy. 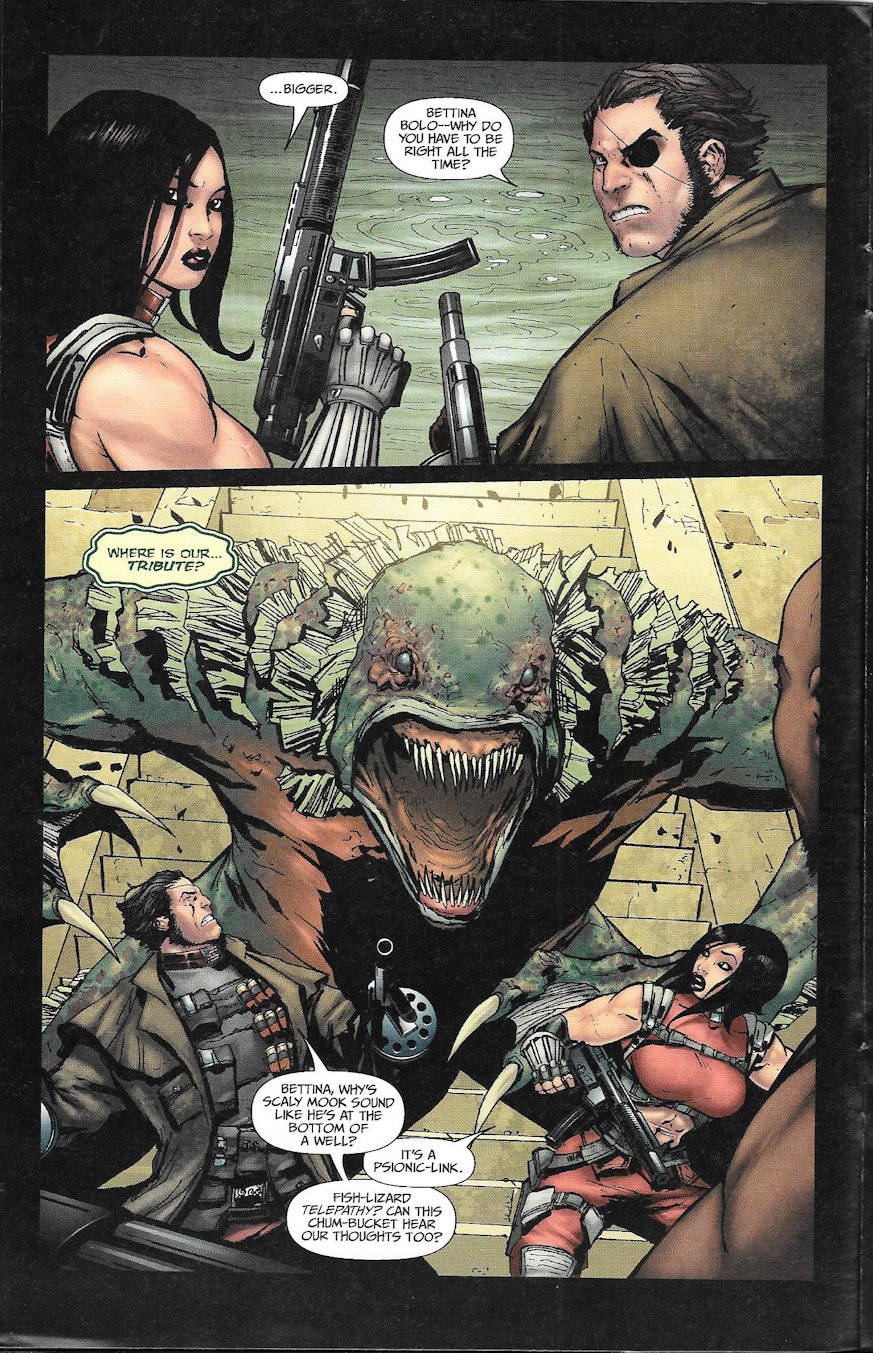 That giant-sized Deep One is fast enough to nab the commander and have him in the drink before his crew can tap a trigger. 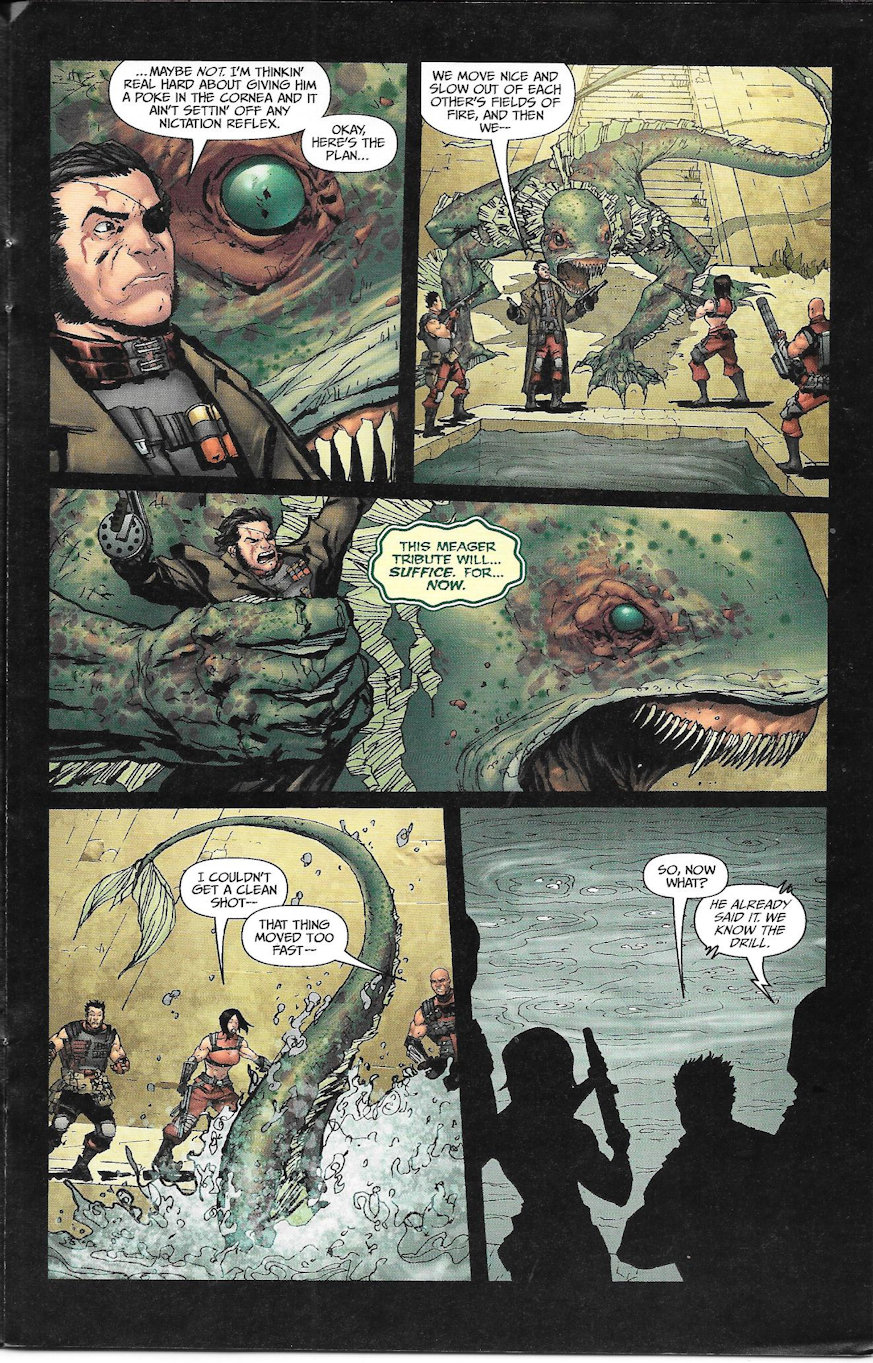 While the crew waits around up top… 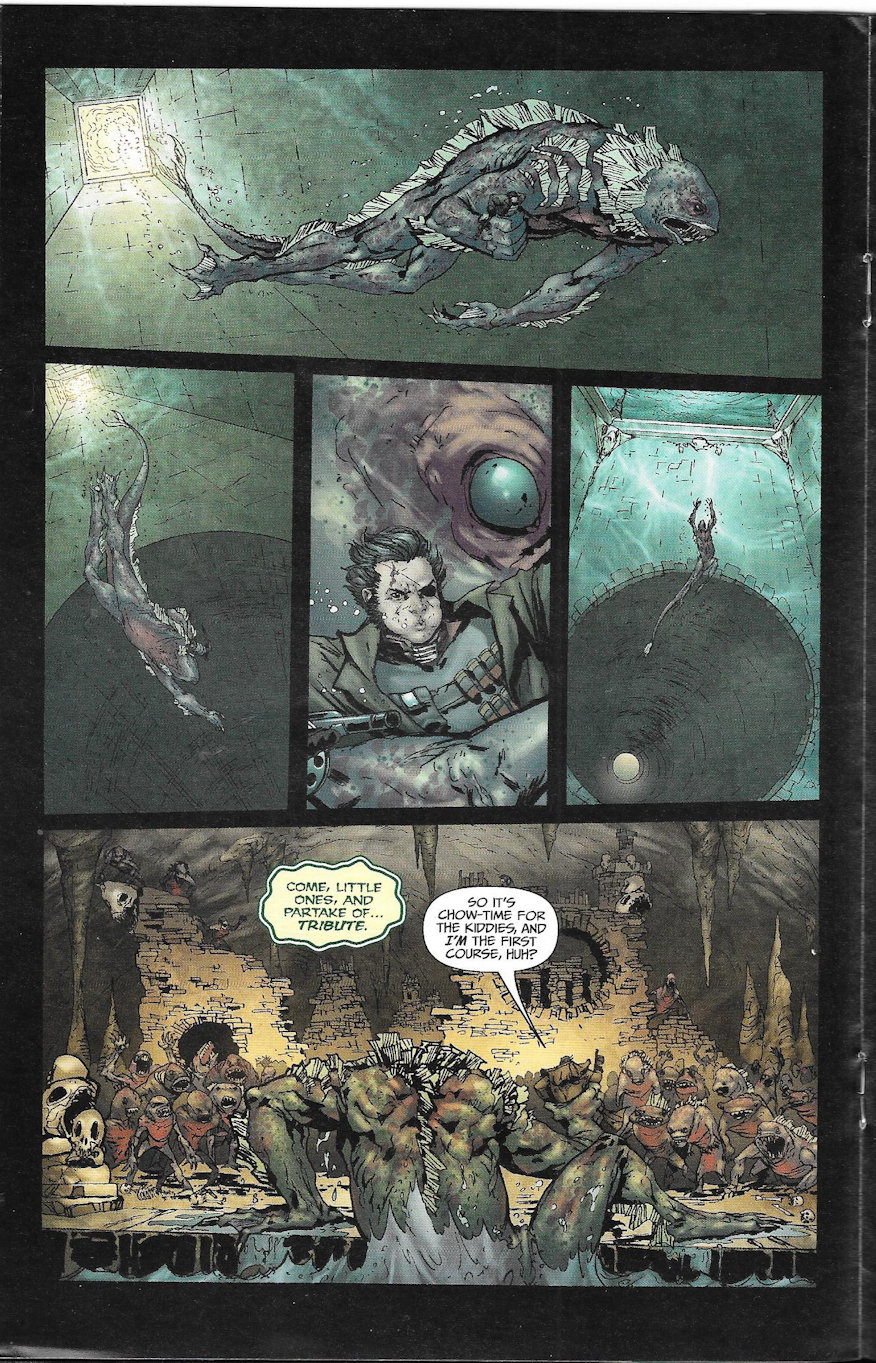 “Kane” (90’s cliché name, even) meets the brood this lizard mama has brought into the world and proceeds to shoot all of them many, many times. 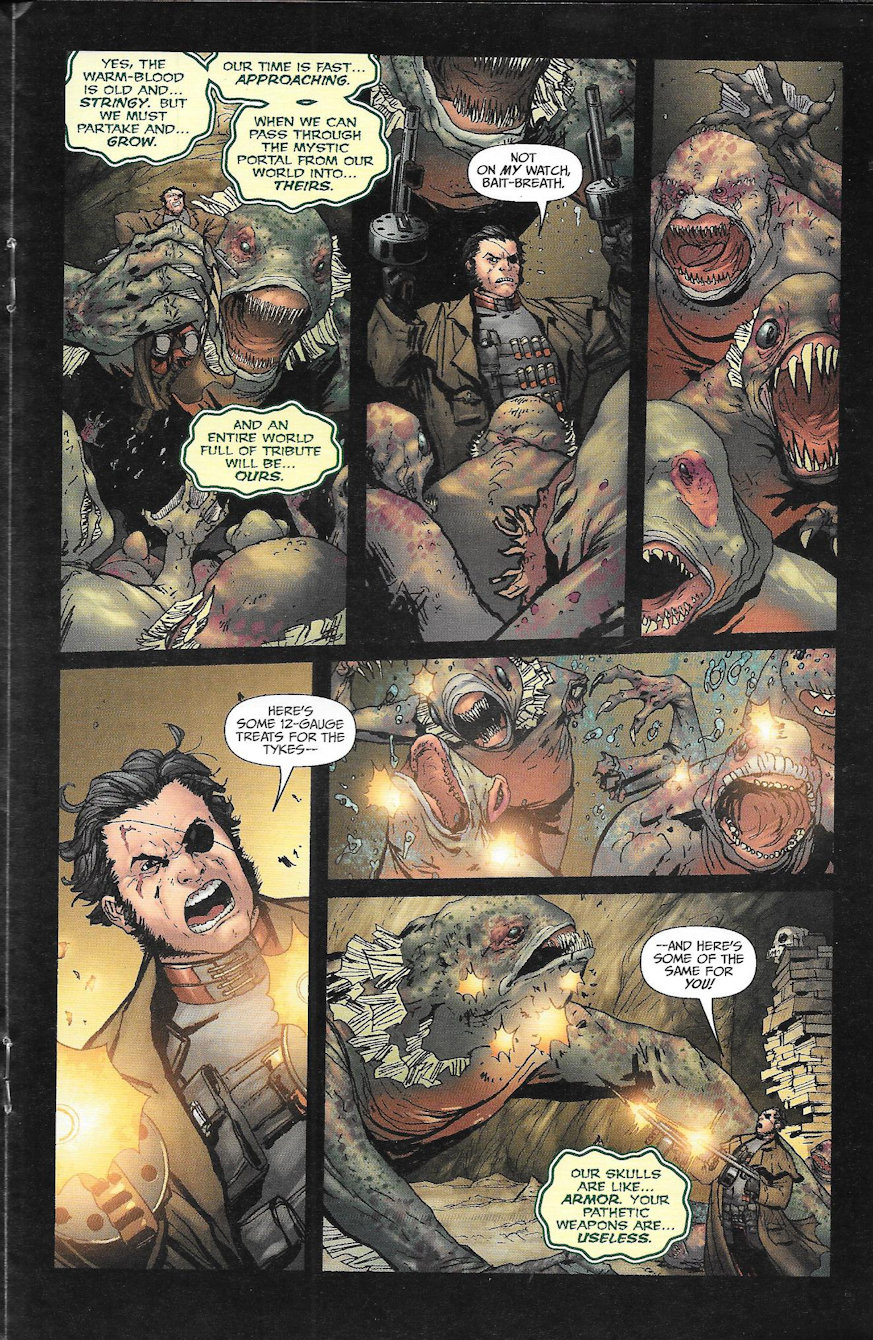 And just when things are looking a bit dicey, the rest of the Spooks Force shows up and, (bet you can’t guess what happens next!)… 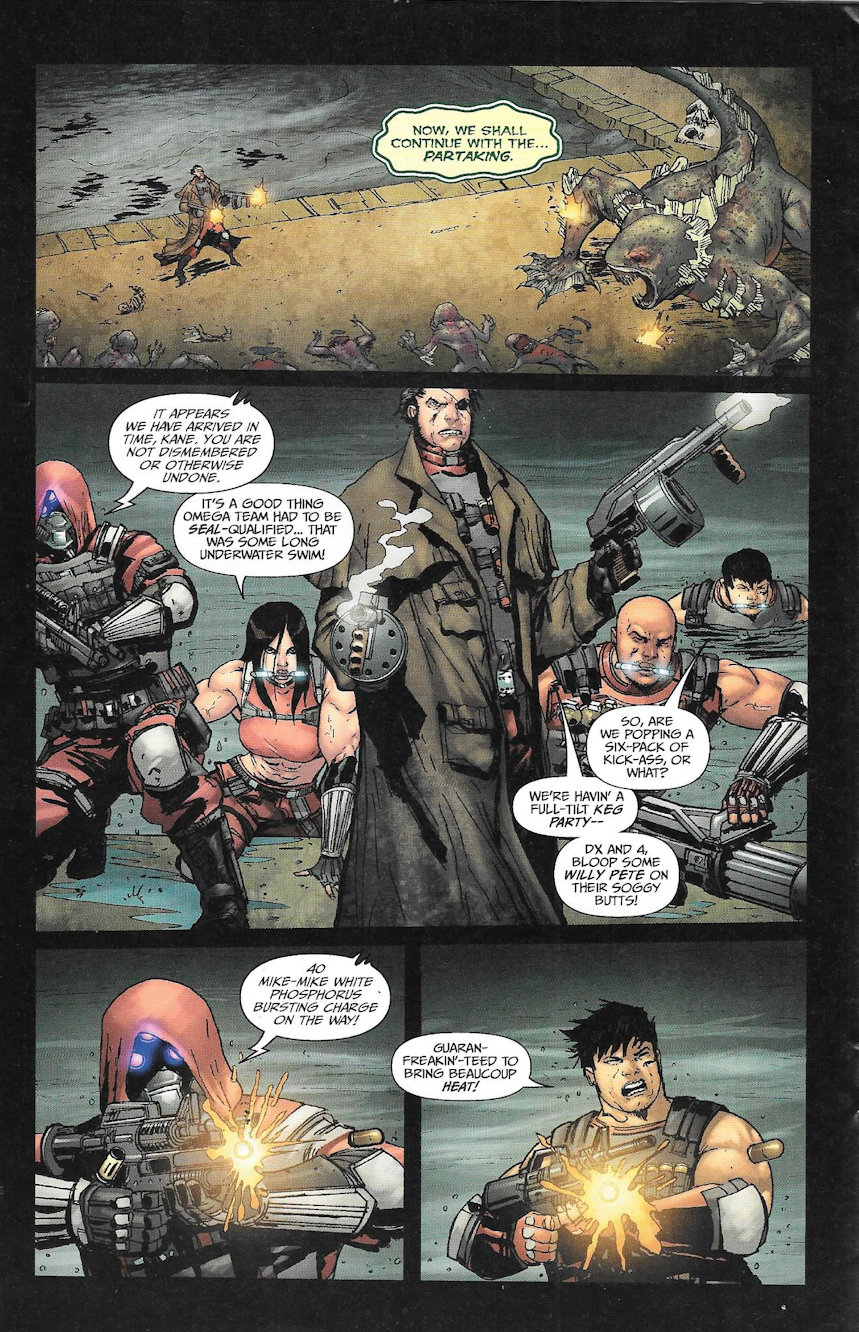 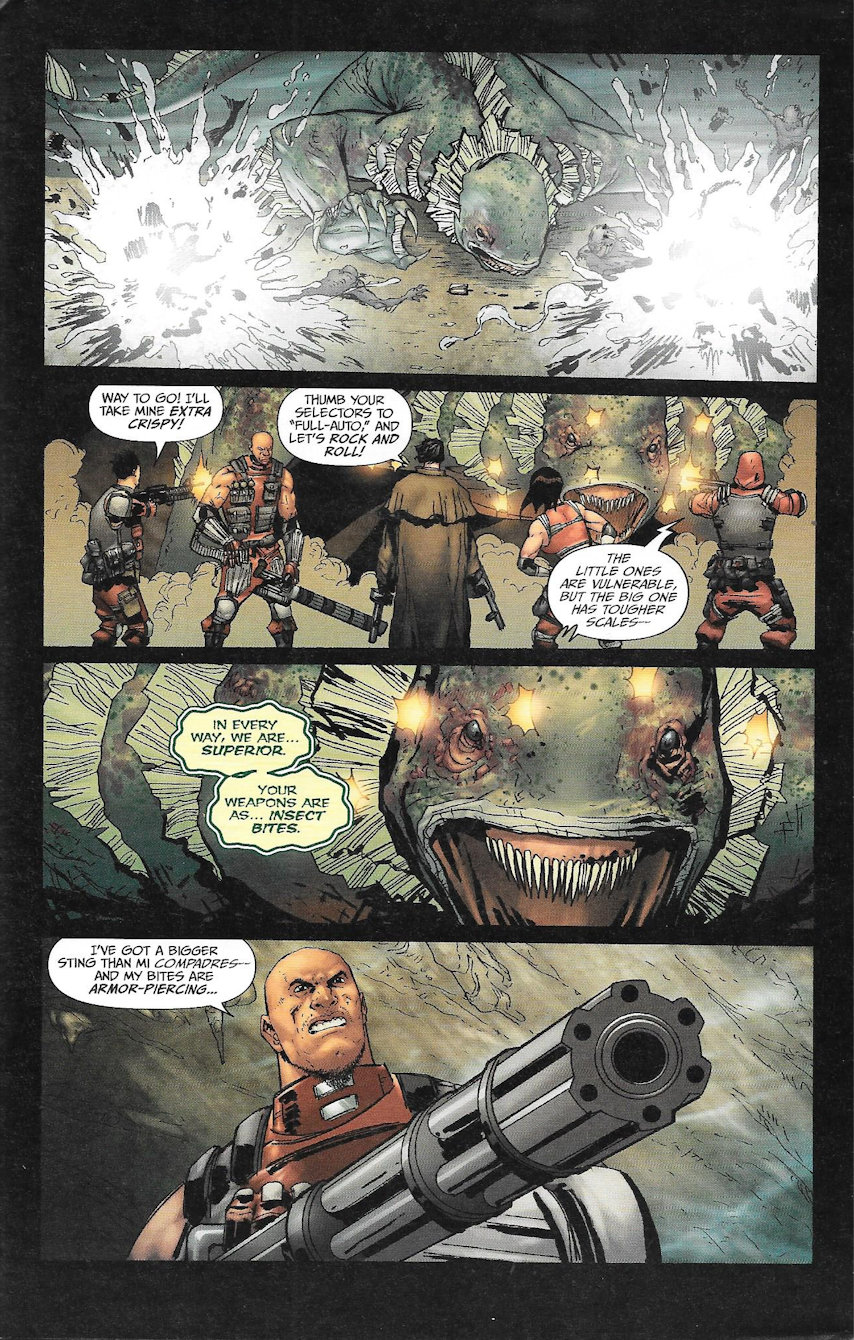 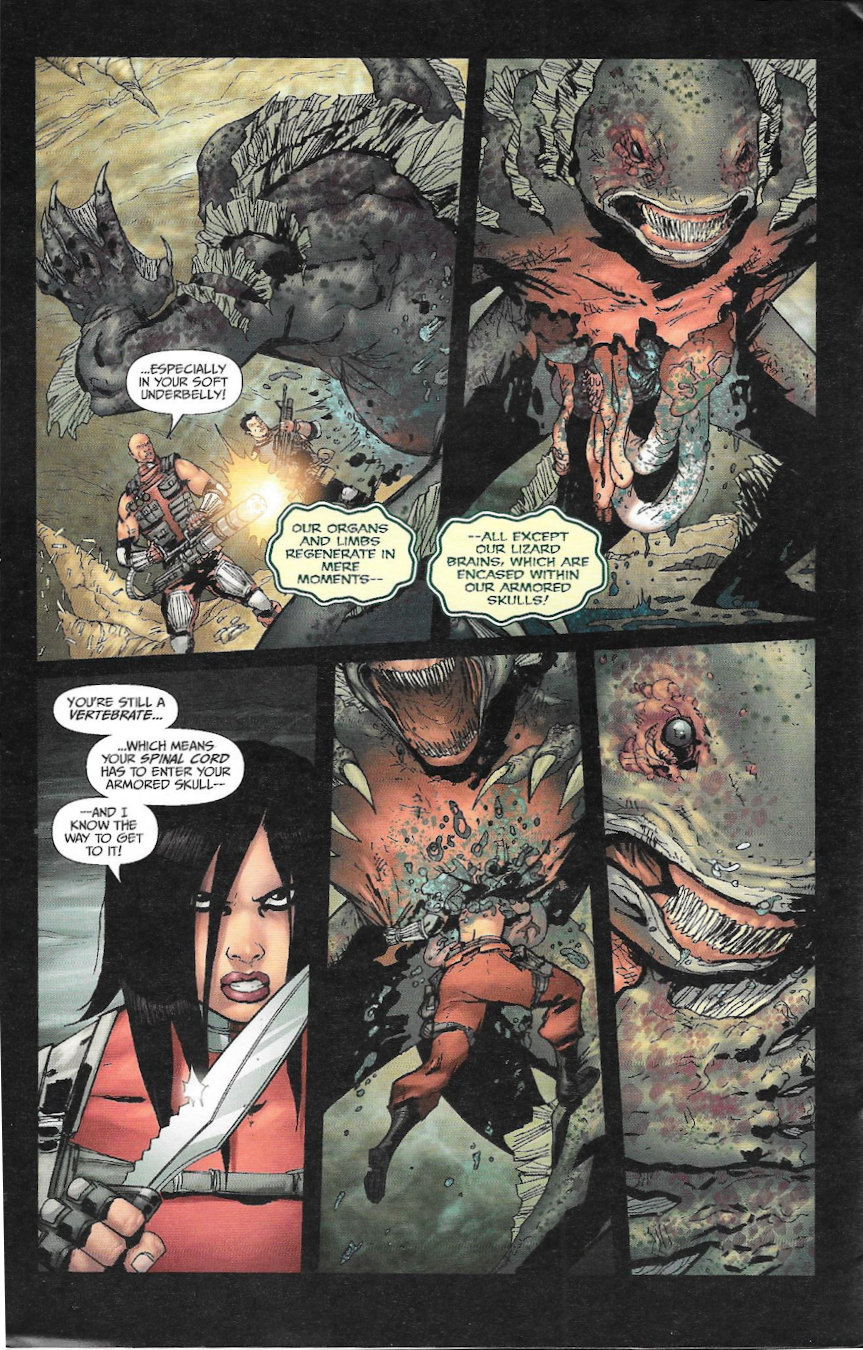 …the book brings out the chain gun, which easily eviscerates our froggy friend.

He isn’t done yet thought. We HAVE to have the team’s only female prove she is more super-solidery than her nearest male equivalent, so she dives into the wound wielding a VERY BIG KNIFE… 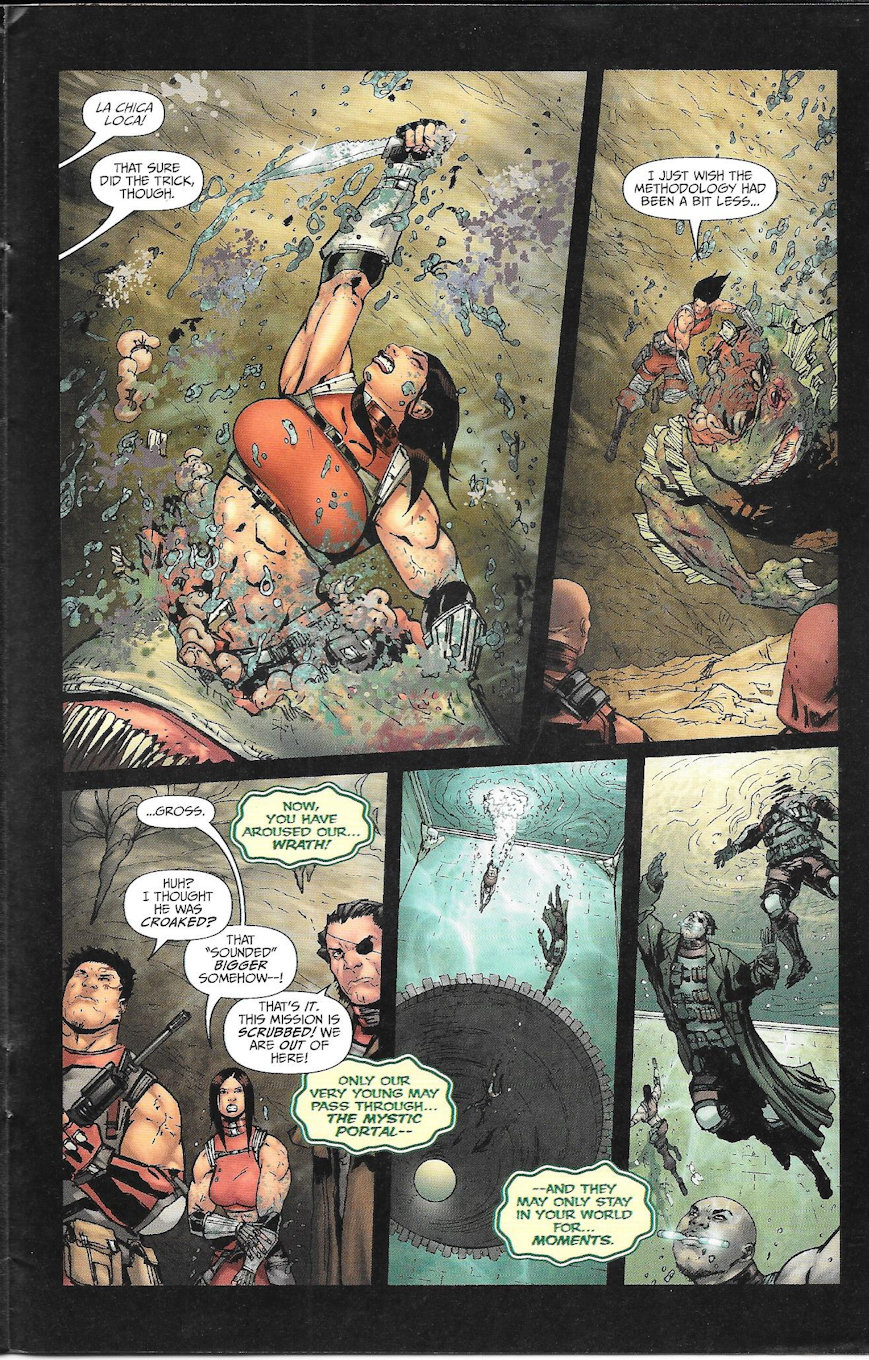 …and further guts the dying fish-man. After which the team beats feet (or fins) back to escape the pyramid… 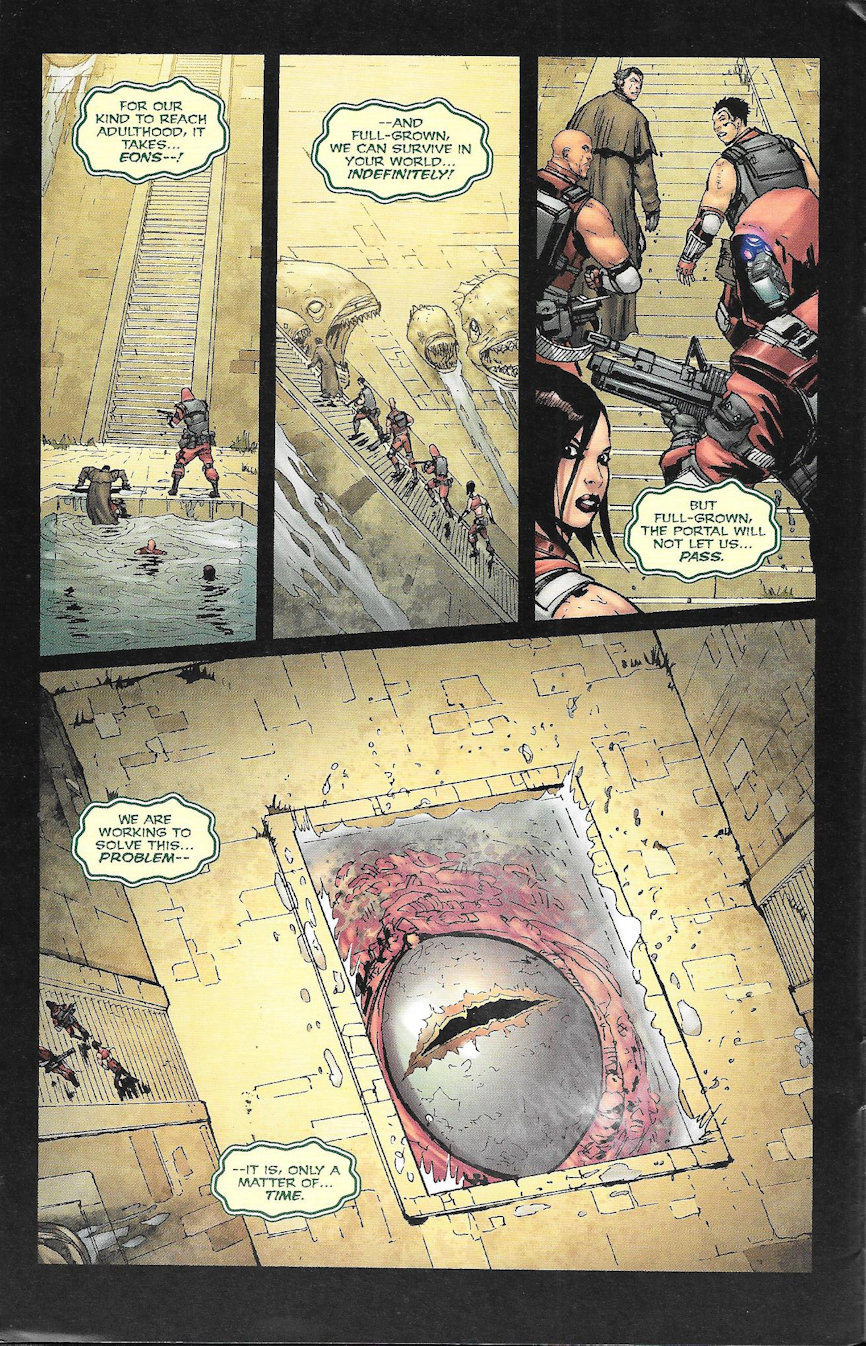 … only for the book to find a good horror note to end on. A note that works well, even if none of the characters are worth two seconds of my time.

Spooks got its four issue shot but then ghosted right after 2009. Shame, as the art was really good and I generally like Hama, just not with these characters. He needed an ongoing to come up with something worth saving from this mess. As it is, Spooks is interesting if you care for diversion, but I doubt it will stick with you for long.

Posted by SonOfCthulhu at 6:20 AM