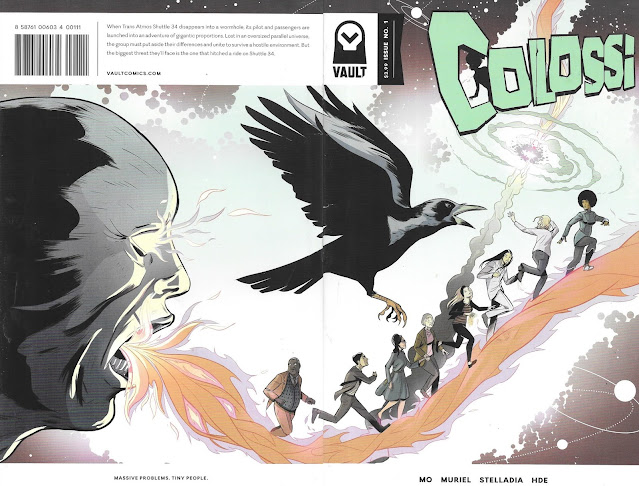 Makes me nostalgic for another iteration of the same tale

I had no idea what I was snatching up when I picked Colossi #1 out of the bargain bin. That surreal wrap-around cover hid whatever story the book might produce. I was intrigued enough to throw it in my basket...and that is a good thing.

By itself the sci-fi / horror comic isn’t really any great shake. However, writer Ricardo Mo is either riffing on or wholly fork-lifting the plot of a two-season show that was one of my favorites growing up: 1968’s Irwin Allen’s Land of the Giants.

I saw LotG in syndication on weekdays as a elementary-school boy in the late 70’s. The basic plot of that show and this book are identical. A small passenger commercial shuttle is thrown off-course by a strange atmospheric anomaly. In both instances the shuttle crash-lands. When the survivors come to, they find that they are marooned on a strange planet where the inhabitants are many times their size and not at all friendly. How will they every make it back home when they are essentially the size of dolls and every being or creature seems committed to their destruction?

Allen milked the concept of Land of the Giants for two years, helped in no small part by these wonderful John Williams opening scores (Season One) (Season Two) and an amazing production company that made the most of their huge (for the time) operating budget. For a kid, watching people smaller than us being bullied and intimidated by suspicious “giant” people rang true in a way that doesn’t translate to adults. I whole-heartedly LOVED the show. Not to mention the fact it riffed on the same vibe as Allen’s Lost in Space.

Mo takes that same exact story (Confirmed in an interview as a direct lift) and revitalizes it for this series. It got four issues from Vault comics, and given that Vault didn’t trade it, I have the feeling it didn’t have a satisfying ending. Part of that makes me wonder if the reason for no trade is sales…and another part makes me wonder if it was legal trademark issues. Shame either way. Same thing happened with the TV show. Never know if those stranded people ever got back.

But the Crapbox did happen across this issue and it brought back enough good memories of the TV program for me to pull up those Williams scores, so I’m counting this in the win column. How is the actual issue in my hands? Thought you’d never ask…

We begin without even seeing out passengers loading. Just – Bang! Zoom! Here’s the captain…. 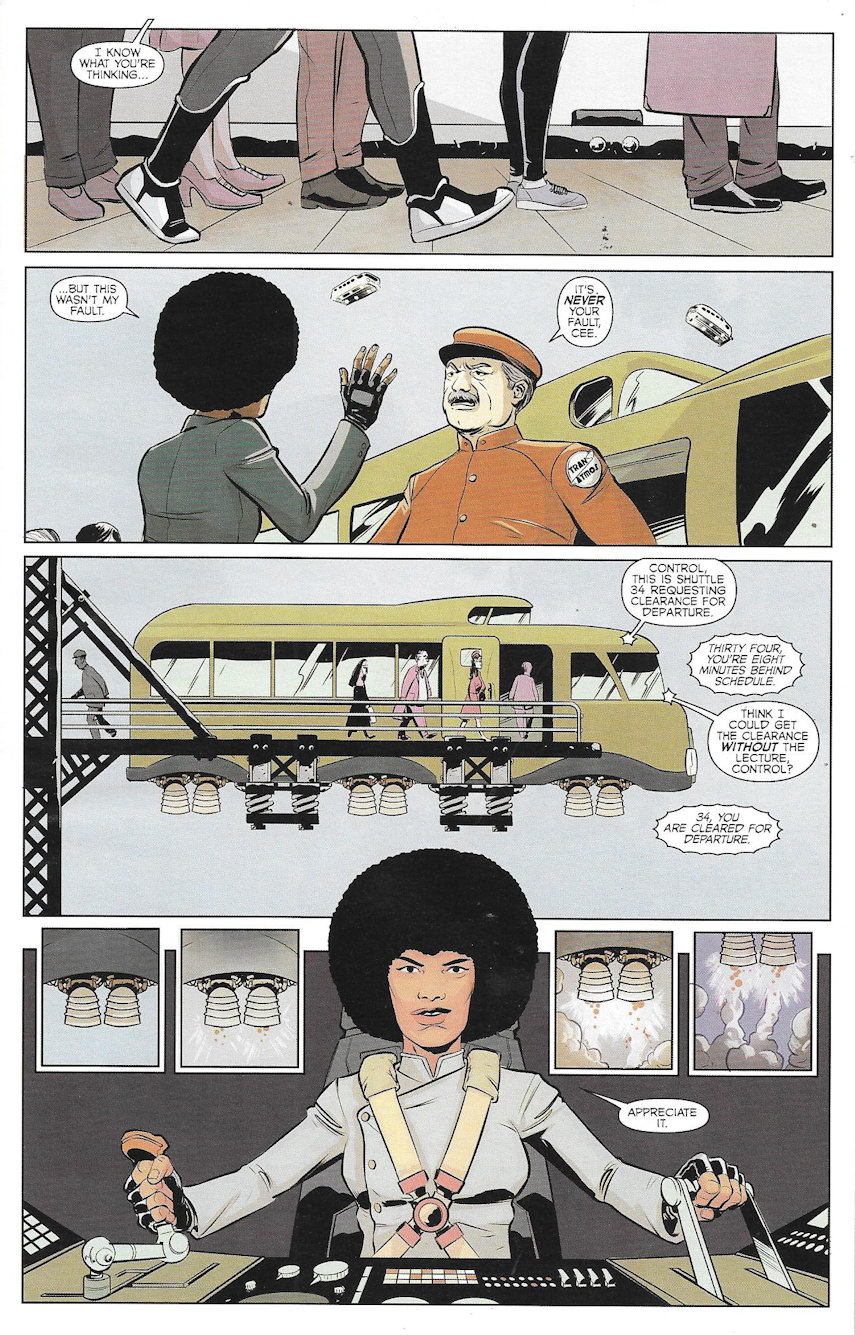 …and here’s your accident that transports them to a world of hurt. 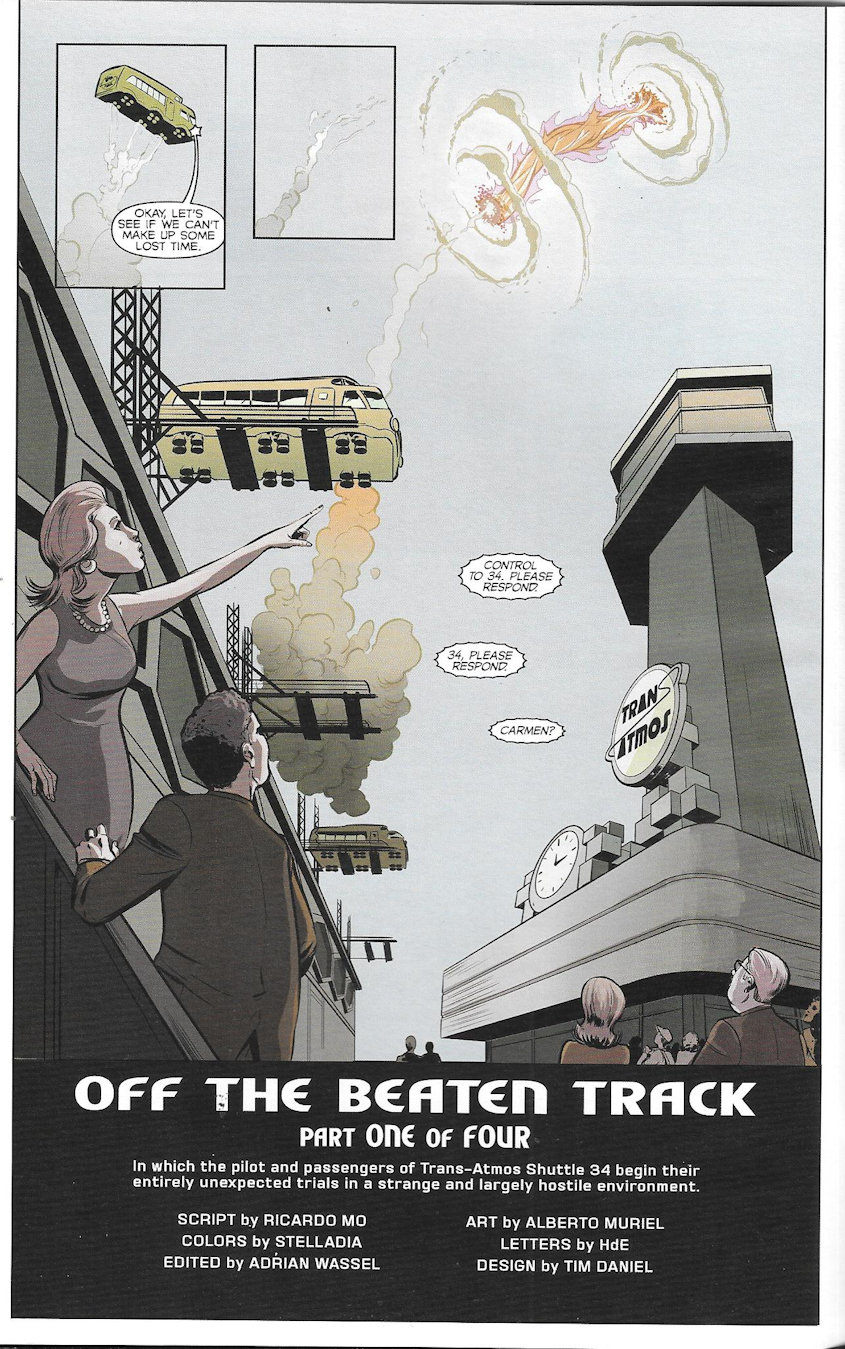 When our captain comes to the ship is dark because all the shutters have dropped. The one synthetic human on board is administering first aid and we already have a nun and another passenger going at it. 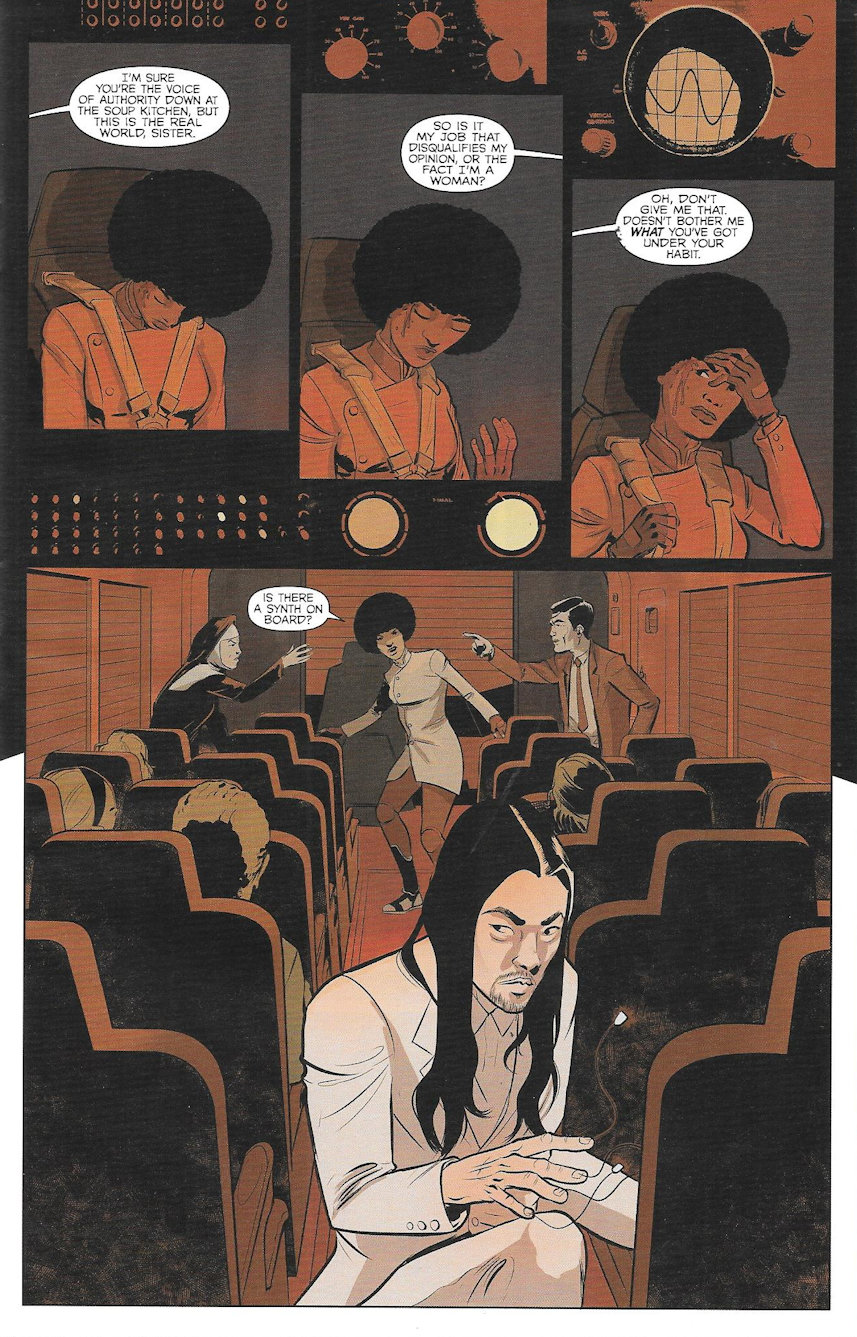 Our captain appears overly concerned about the synth’s actions and then about the condition of her passengers. Learning the boy is injured means they need to get him to a doctor fast, which entails opening the shutters. 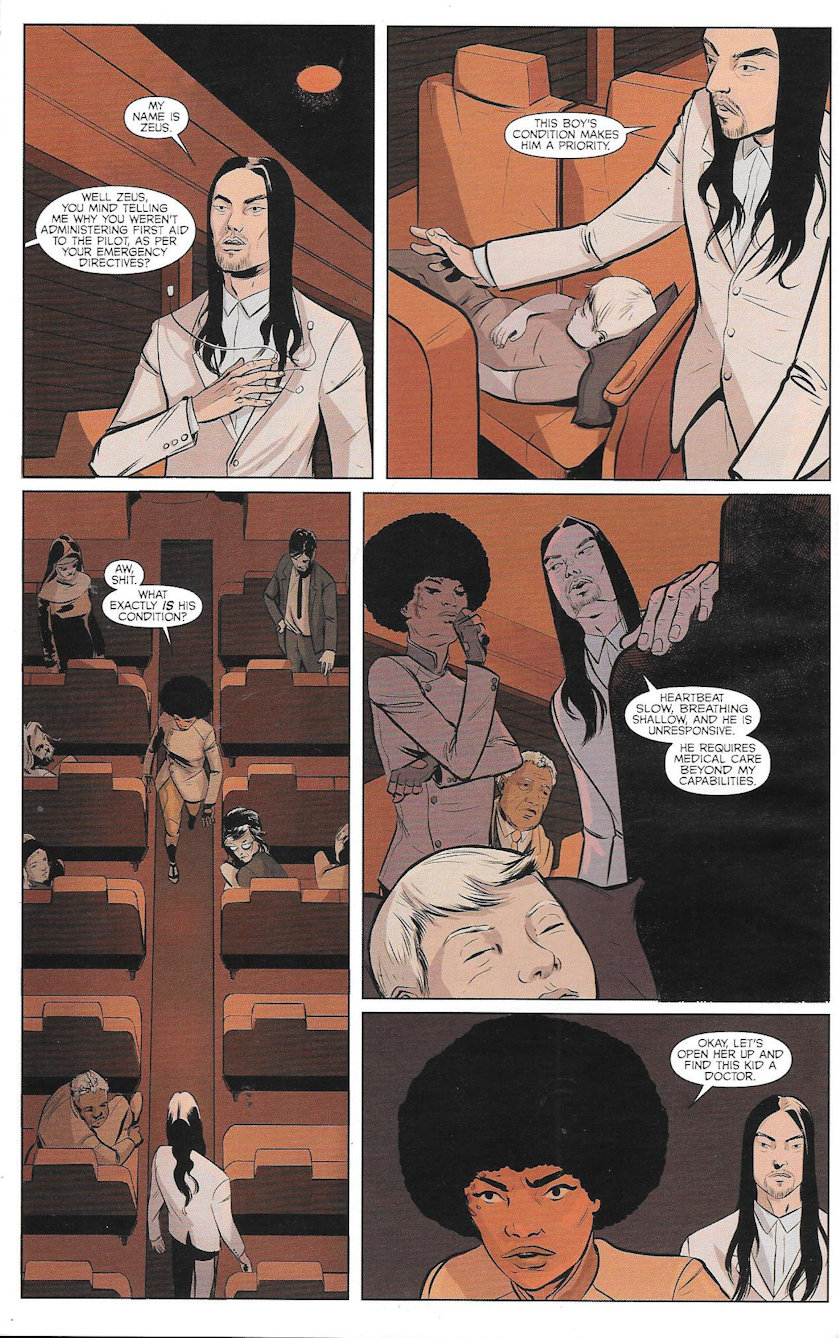 …which puts her at odds with pushy male passenger, who quickly gets shutdown by “nun-who-calls-people-assholes.” 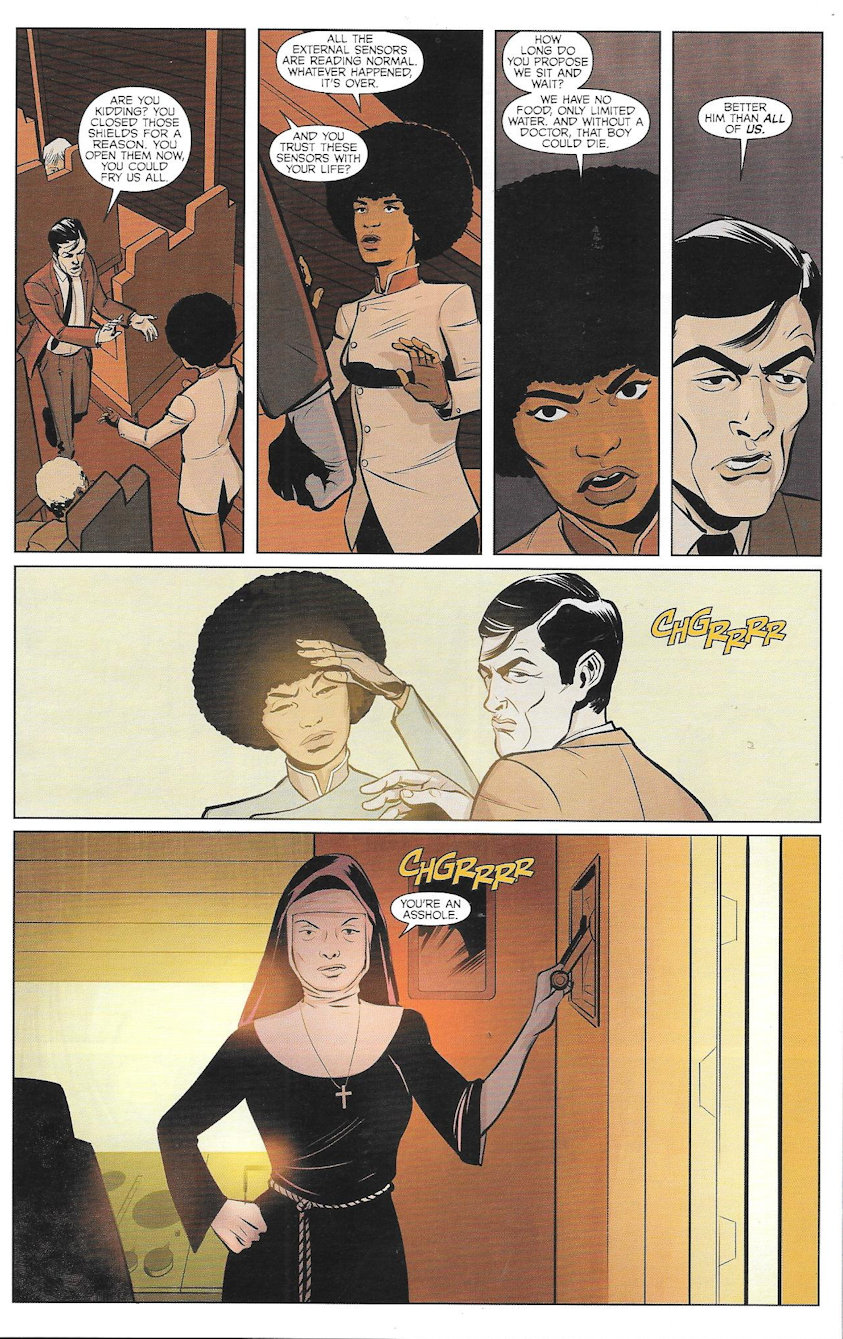 Sadly, nun-who-calls-people-assholes is killed by giant scorpion immediately afterwards. Boo hoo! She was my favorite character! 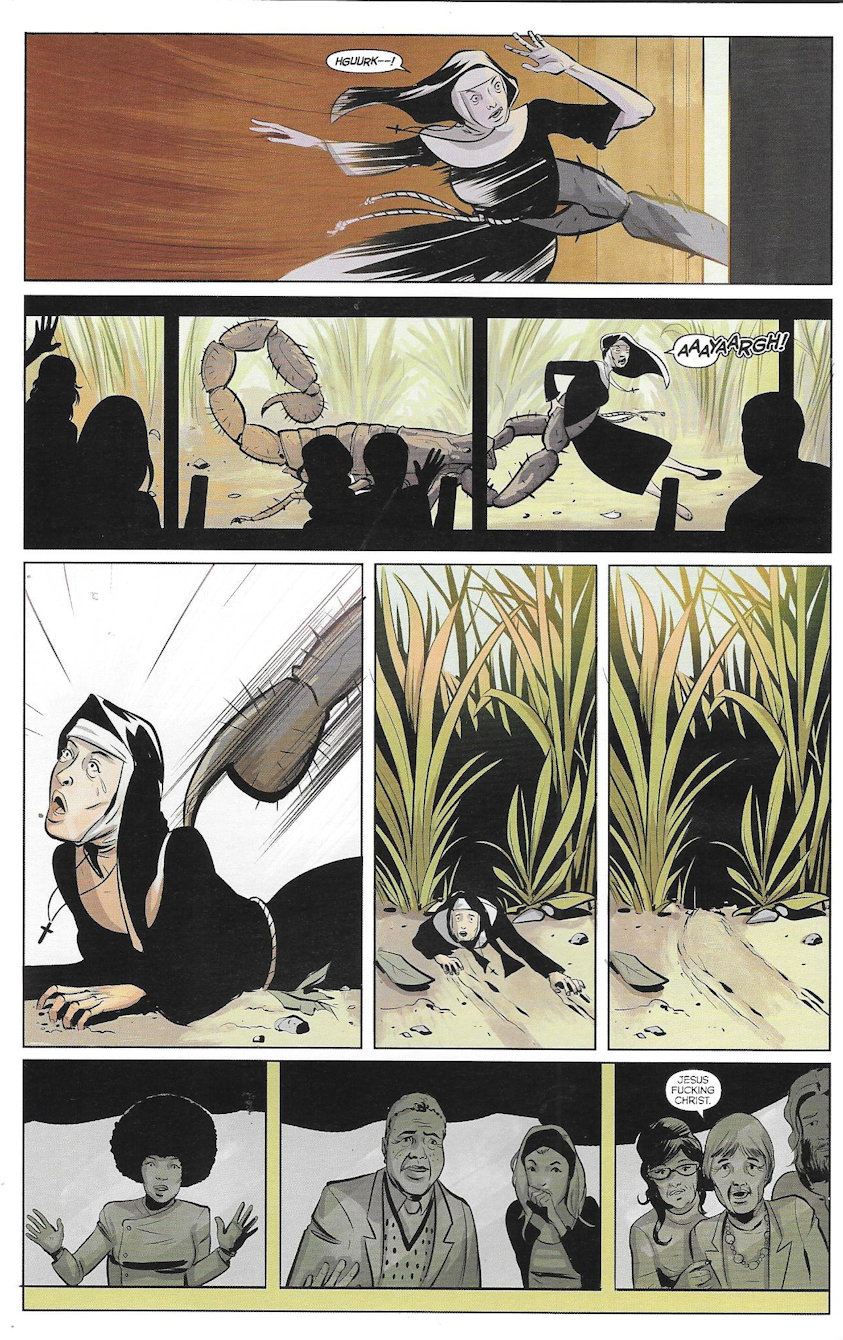 Captain is a take charge woman and she wastes no time in giving orders for people to move out. Asshole-man tries to argue the point and she bad-asses him right back down a notch. 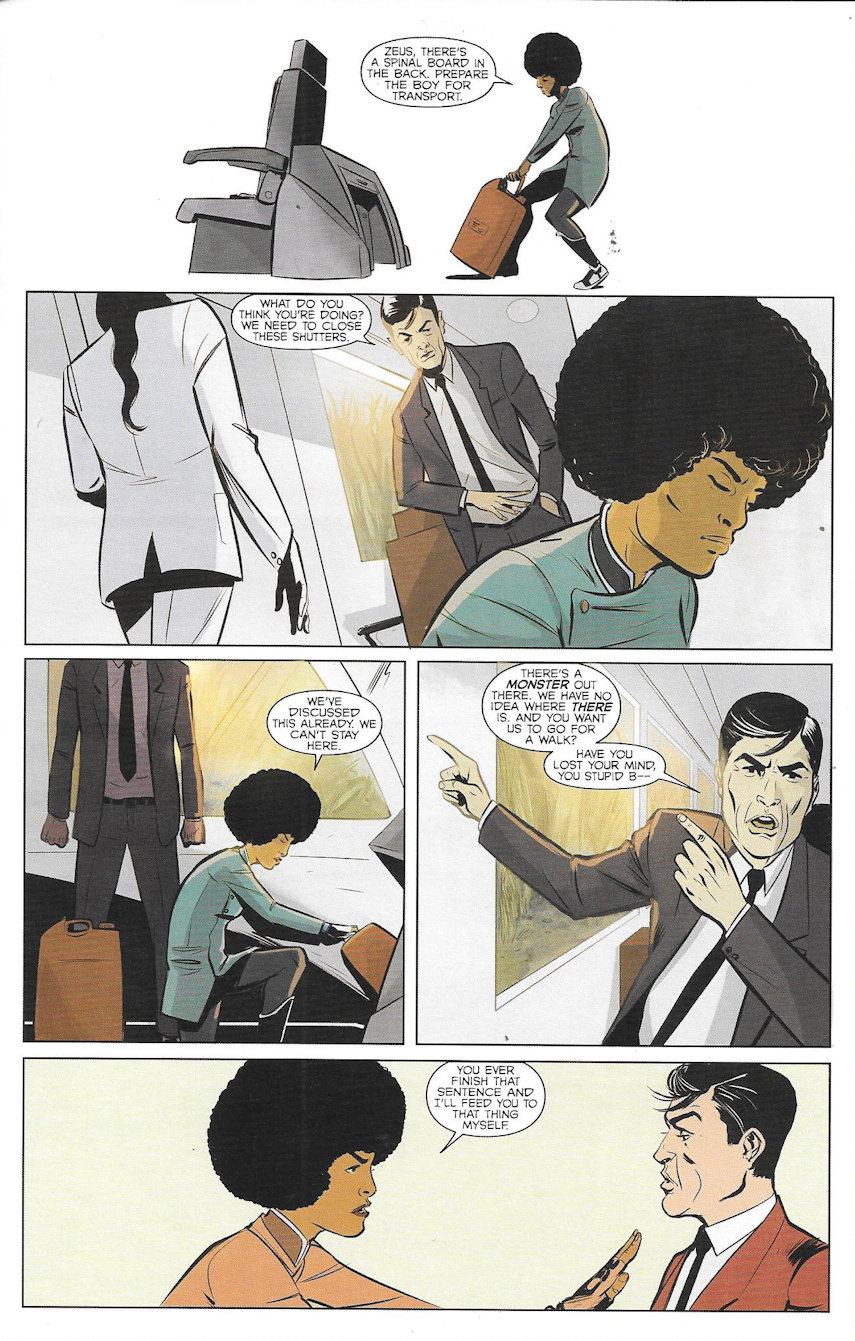 With that, they set off into the…Land of the Giants!!! Or something like that. The land of Tolerance, I would not have termed it. Mainly because that nun got eaten by a giant scorpion and shit. 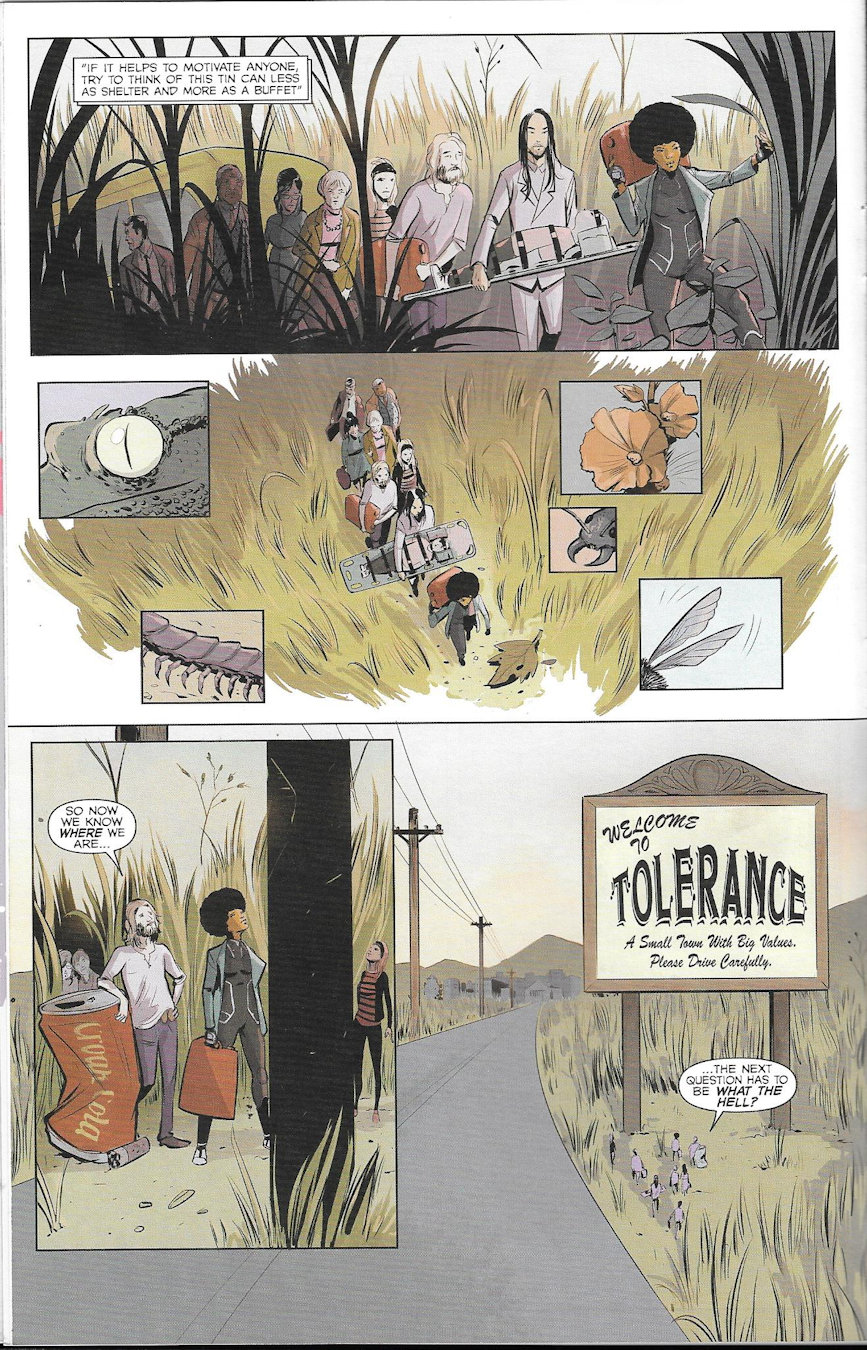 I will state that the story doesn’t try to catch a breath at all. It has a rushed quality to it that removes a lot of the awe and astonishment these characters should be feeling. Instead, they just sneak into town and start skulking around looking for ways to break into shops to get supplies. 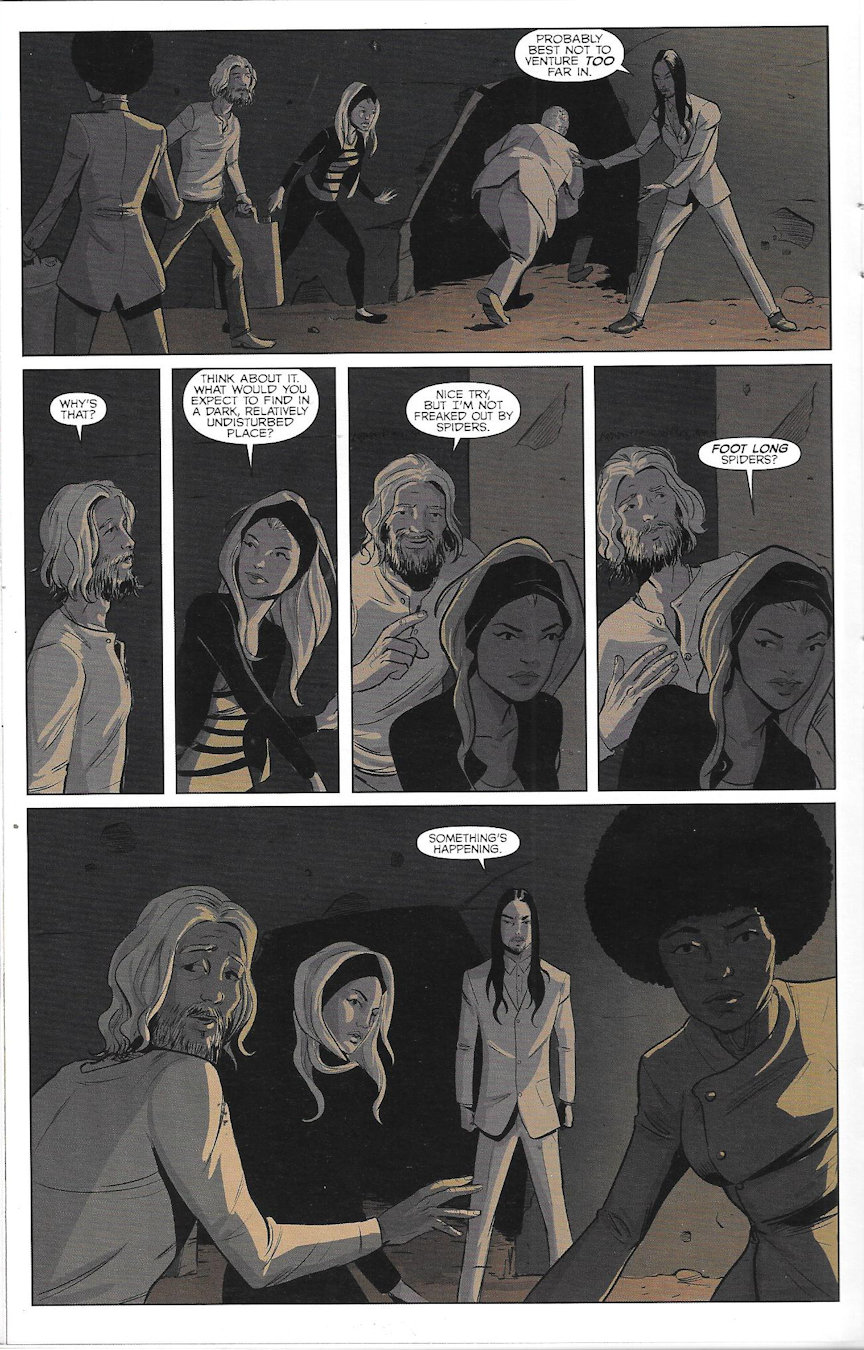 And foot-long spiders or not, the team seems awfully happy to drink cat water and eat giant-sized cat food kibbles. The water I can understand, but no one I know wants to eat kibbles. And I’m of the age where some of us start having to due to money issues.

Yet this is the best they can come up with and they are totally eating giant kibble. 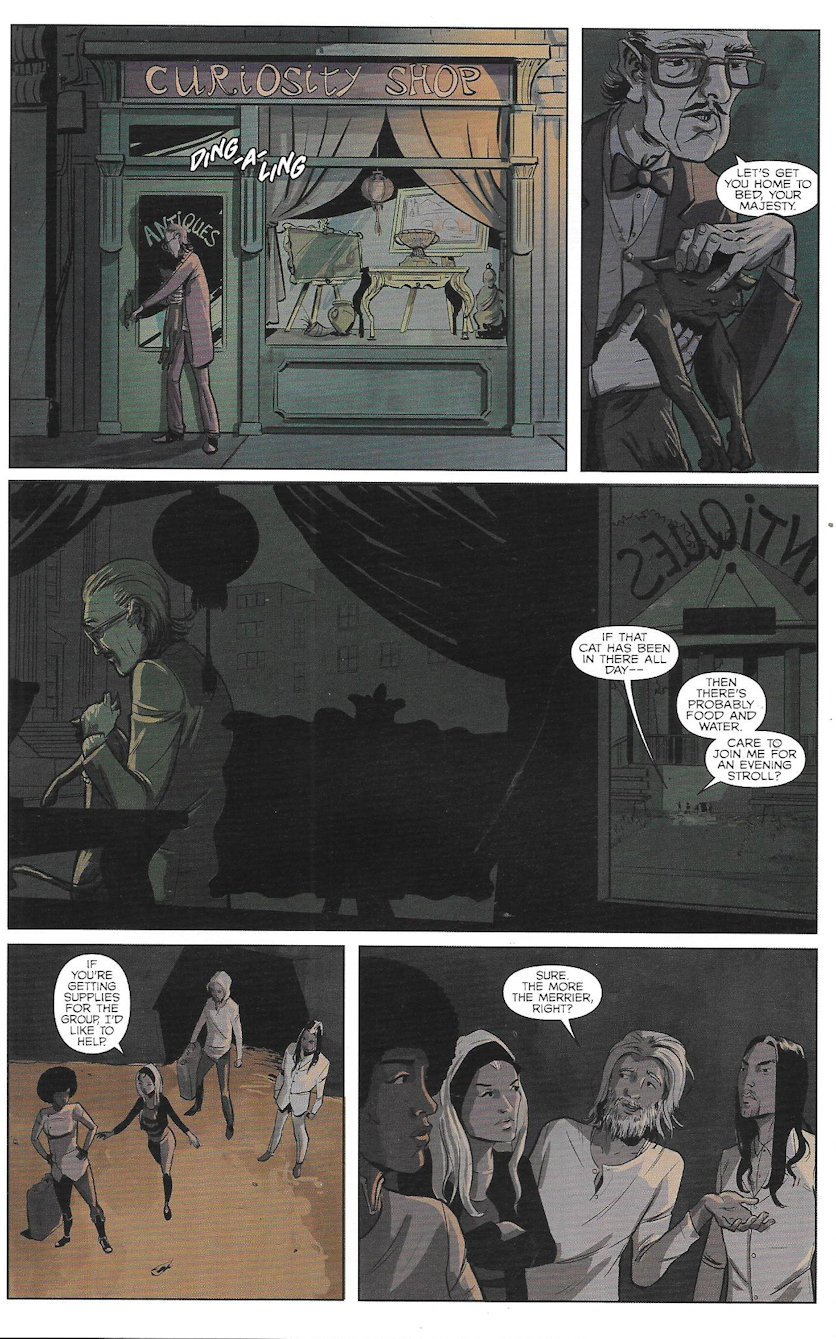 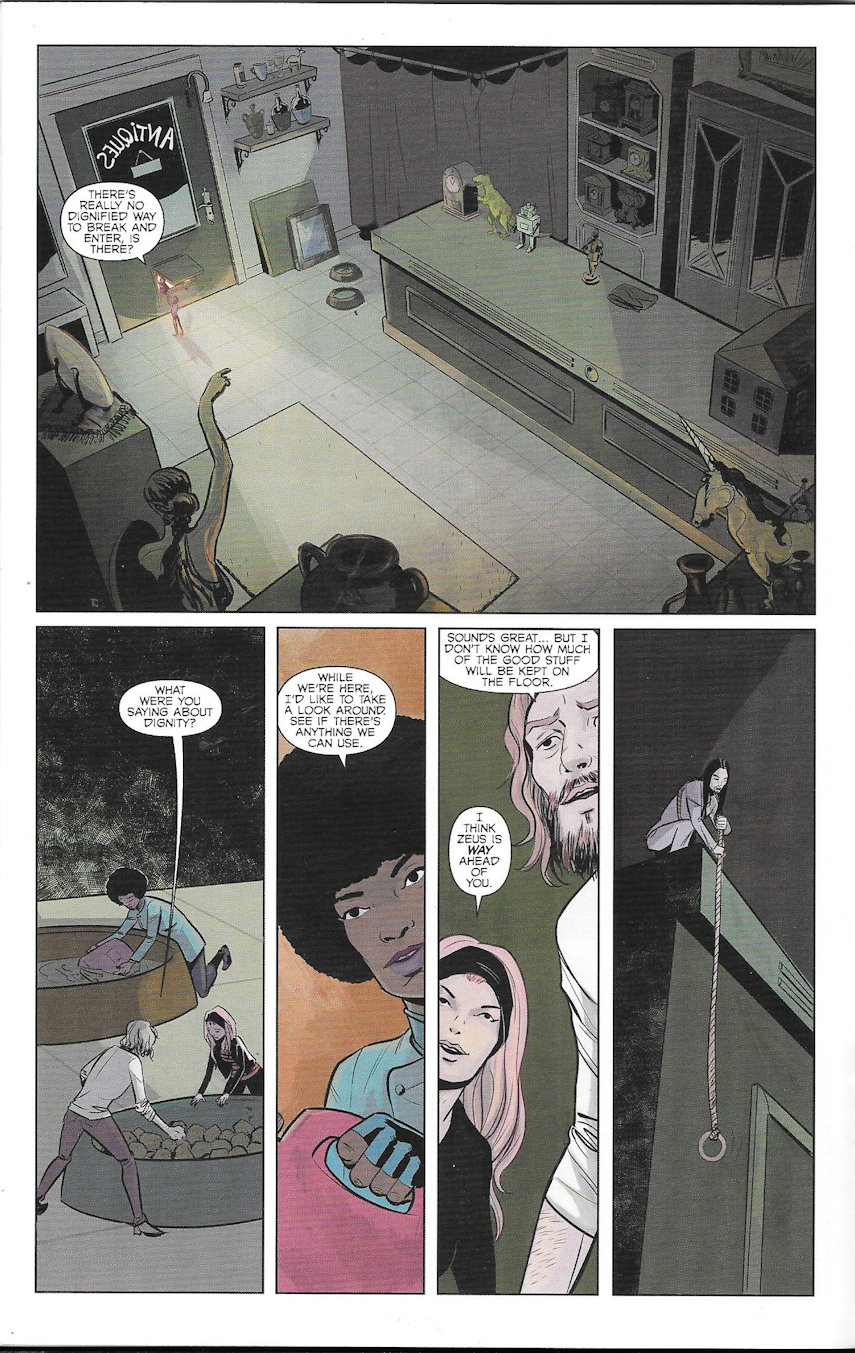 There is one good moment on the next page where the synth comes face to face with a symbolic representation of himself. 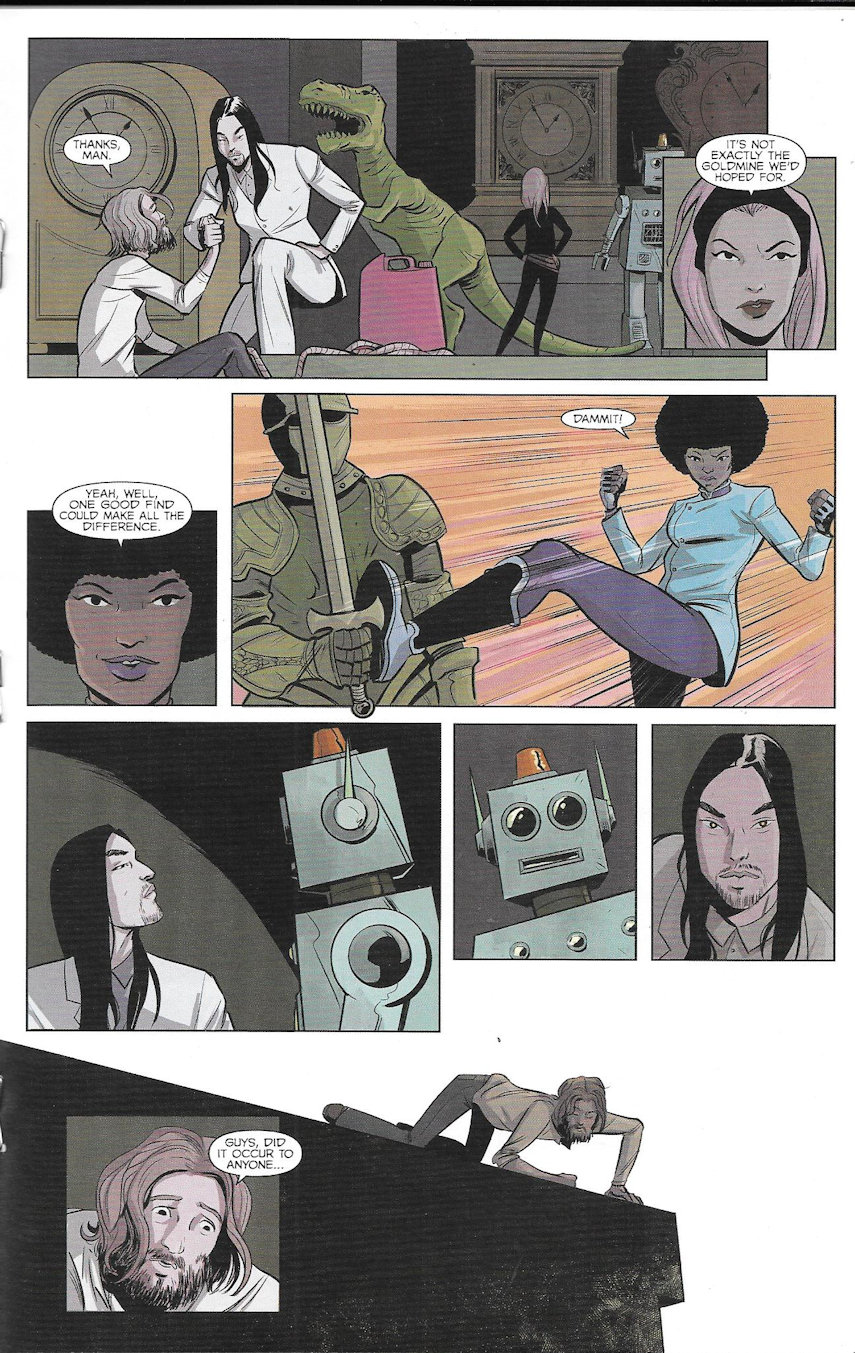 Then we get the obligatory “chased by giant animal” part of the story and no, I won’t get mad it is a cat in this instance. That was the way of the original story, too. 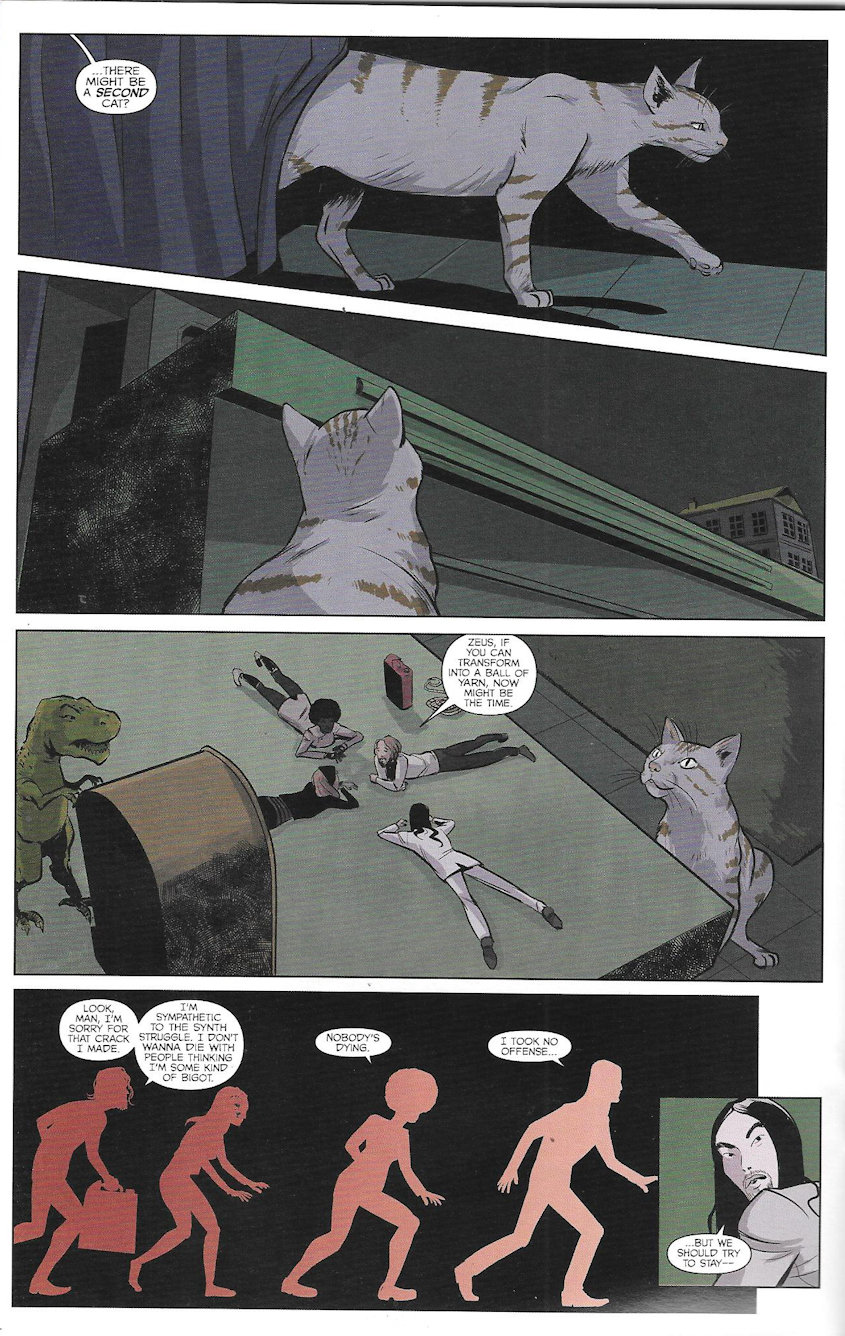 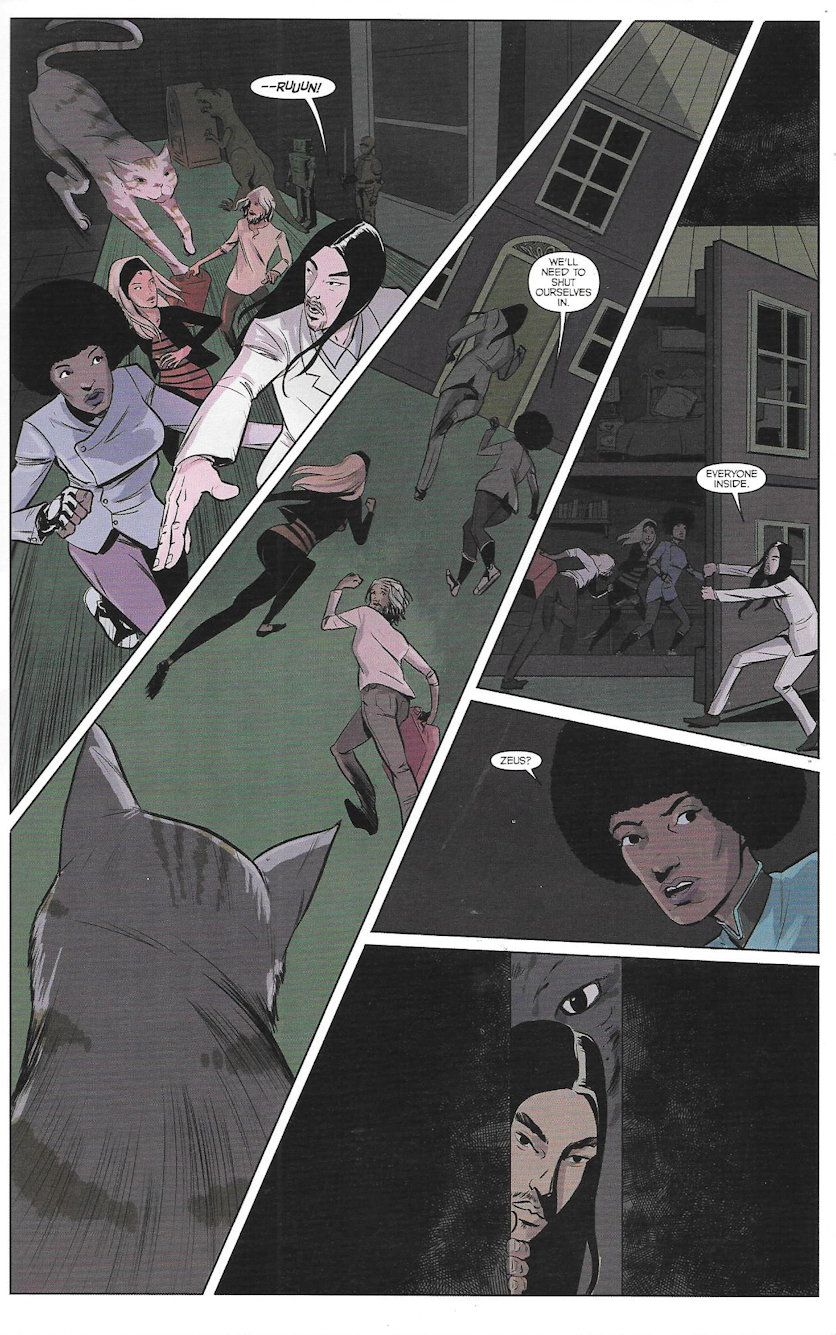 When the dollhouse undergoes a CATastrophic cat-quake, we quickly change perspectives to this kid shooting cans outside while the old man with his SECOND CAT open the shop up for the morning. While he picks the house up off the floor, our synth makes a run for it. 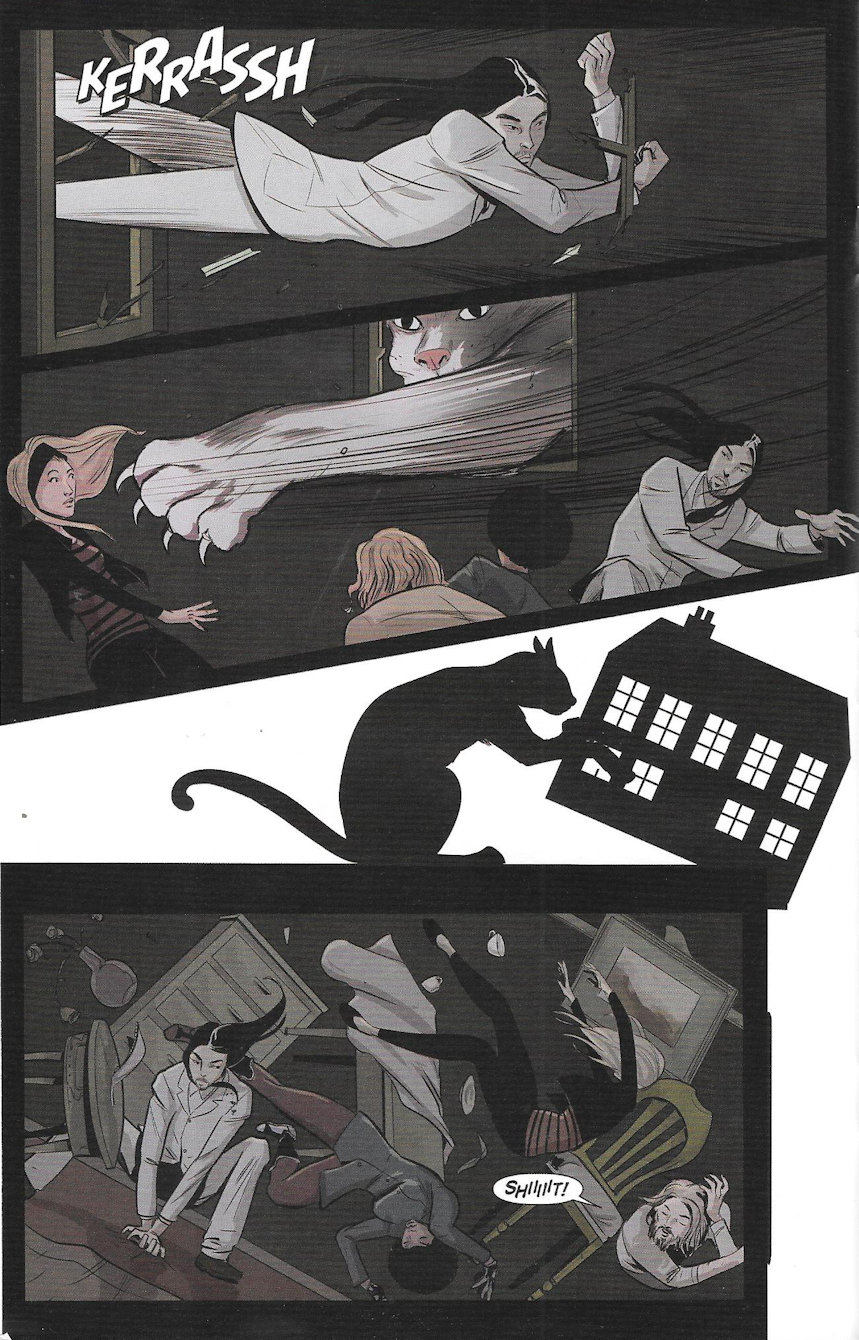 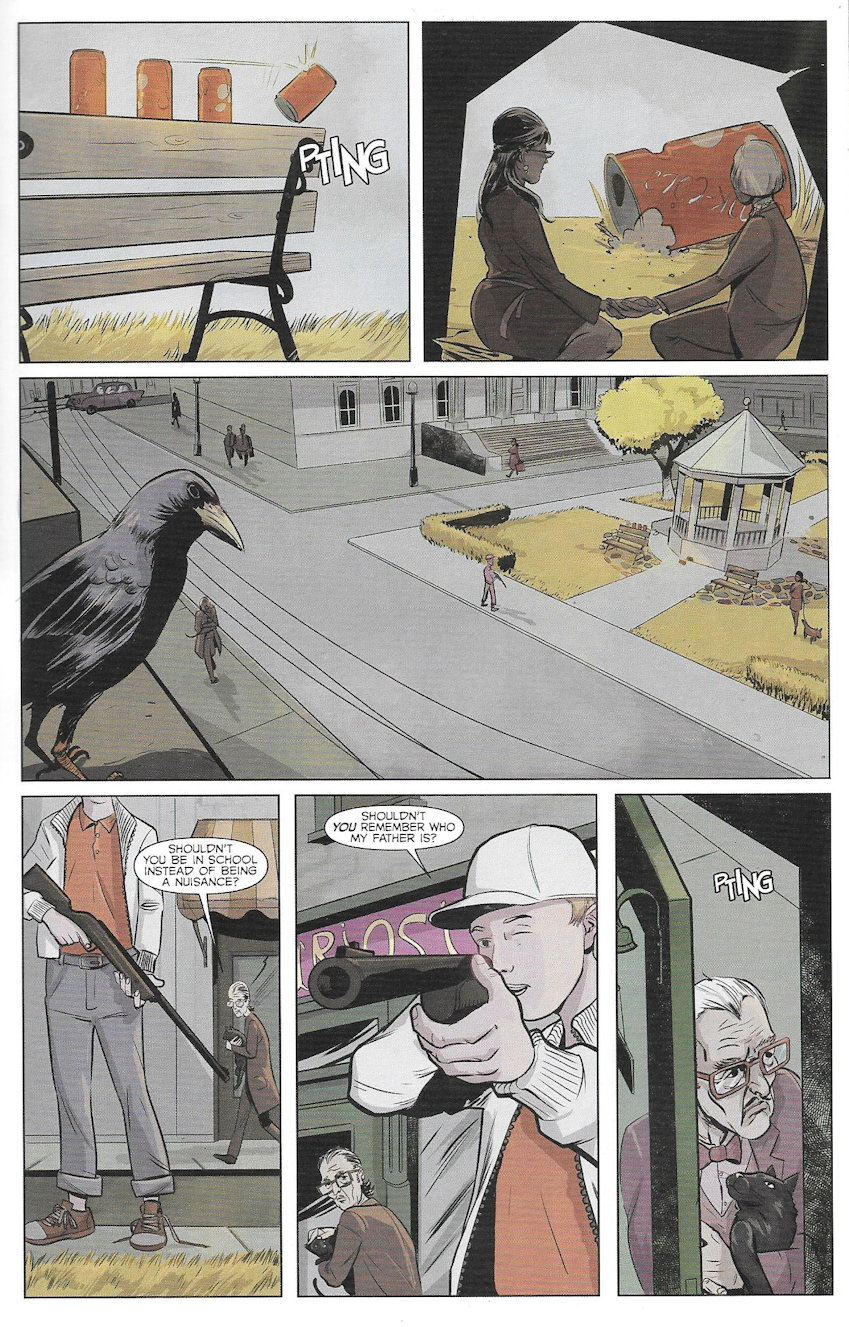 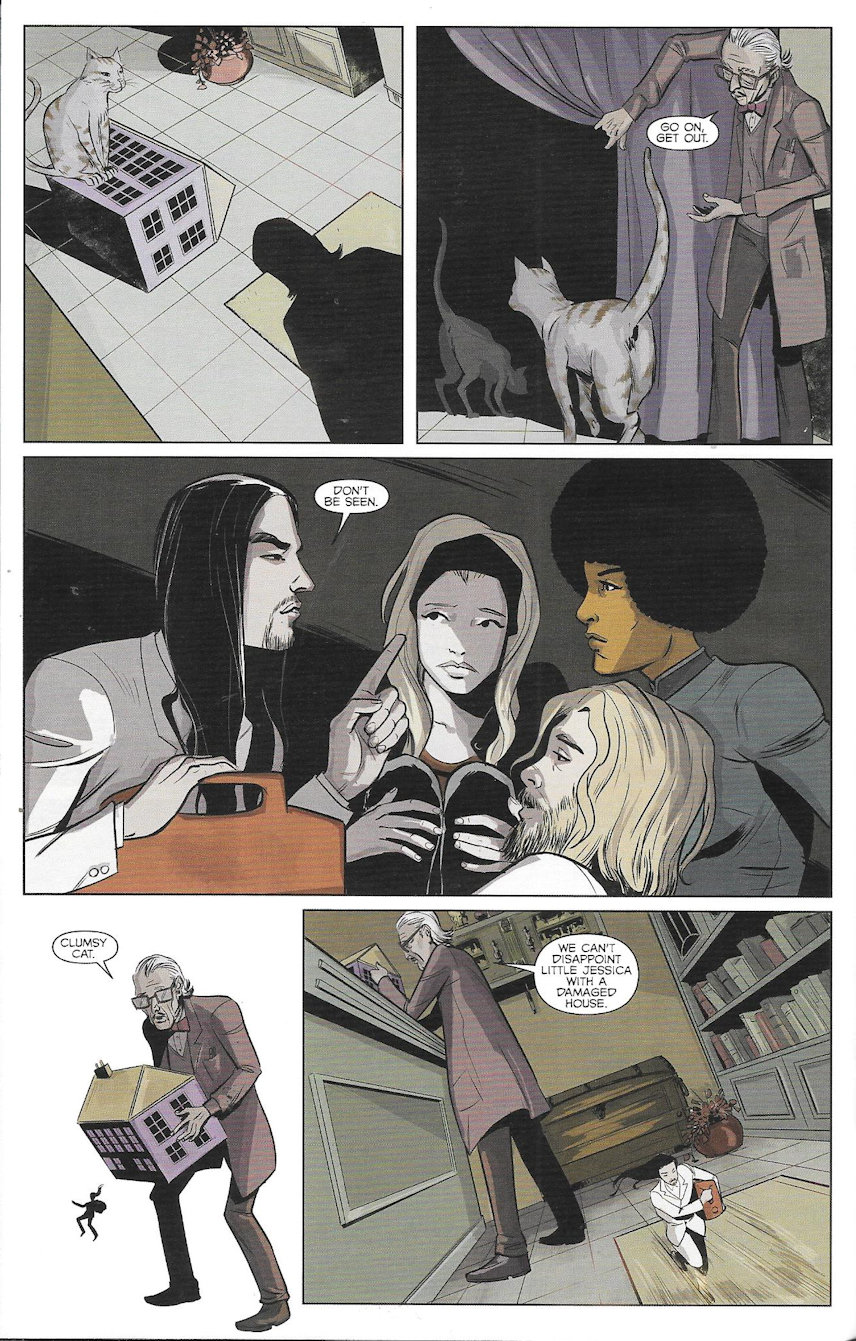 And he would have gotten away with it too, if it hadn’t been for those brighter than average crows. 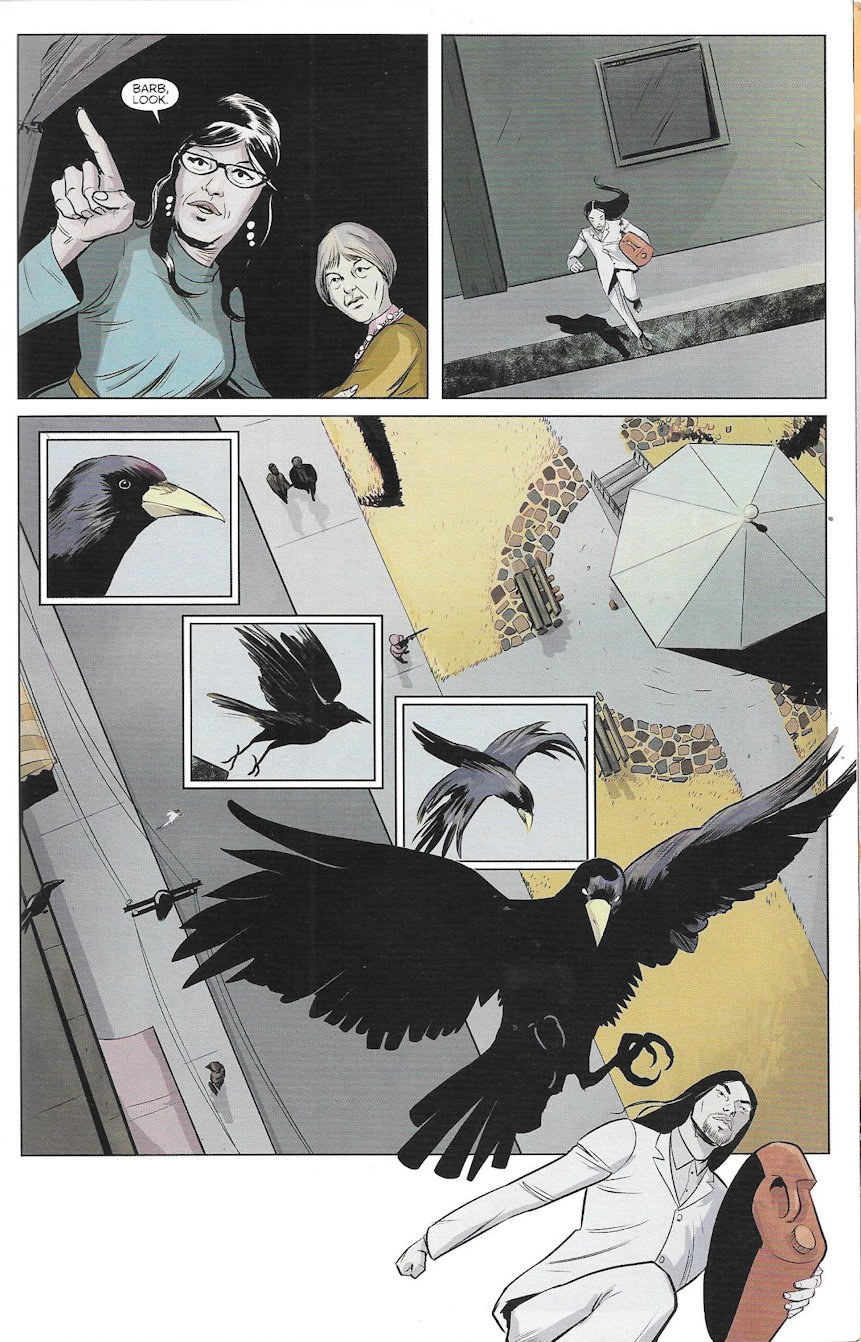 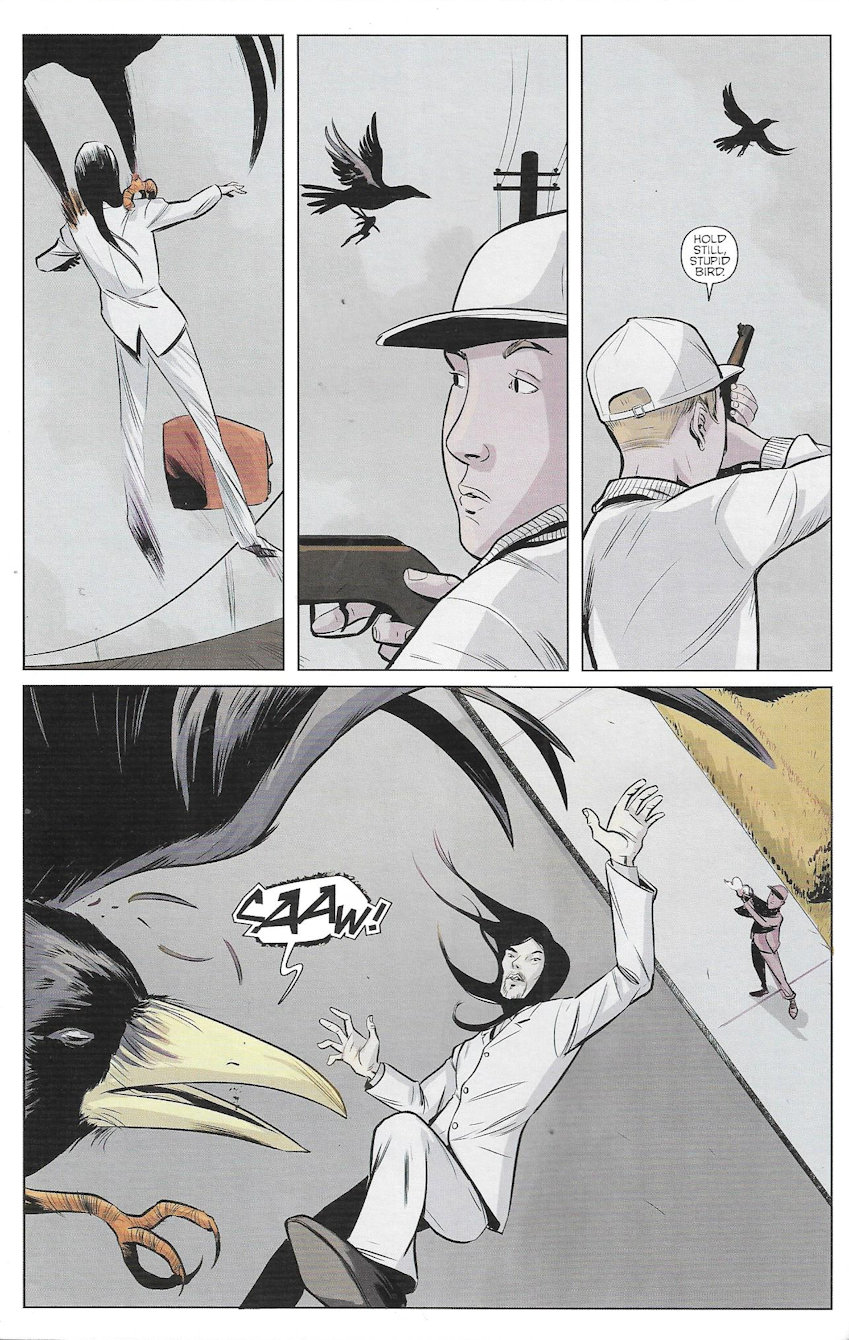 …and bingo! We have the old toy shop owner now in possession of one very broken synth… 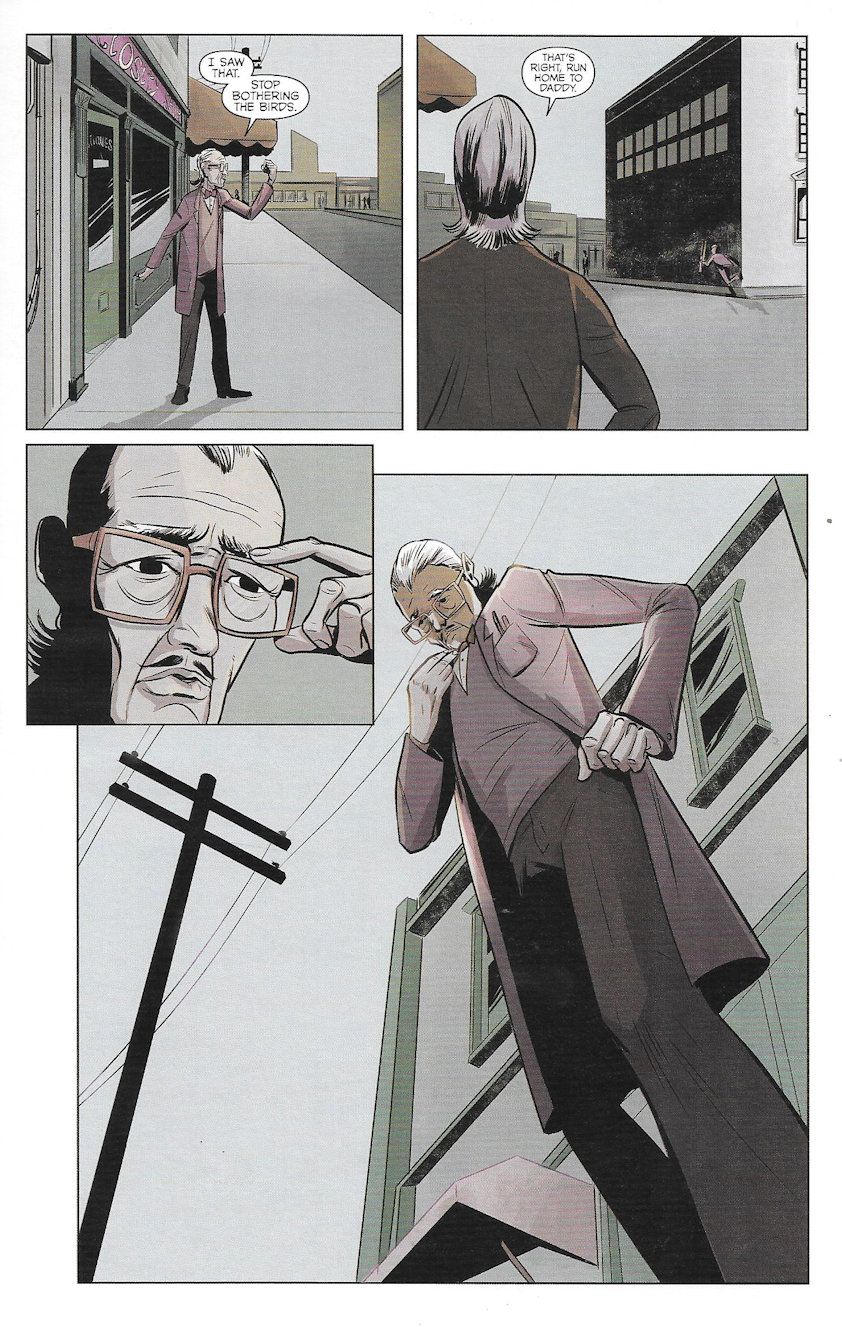 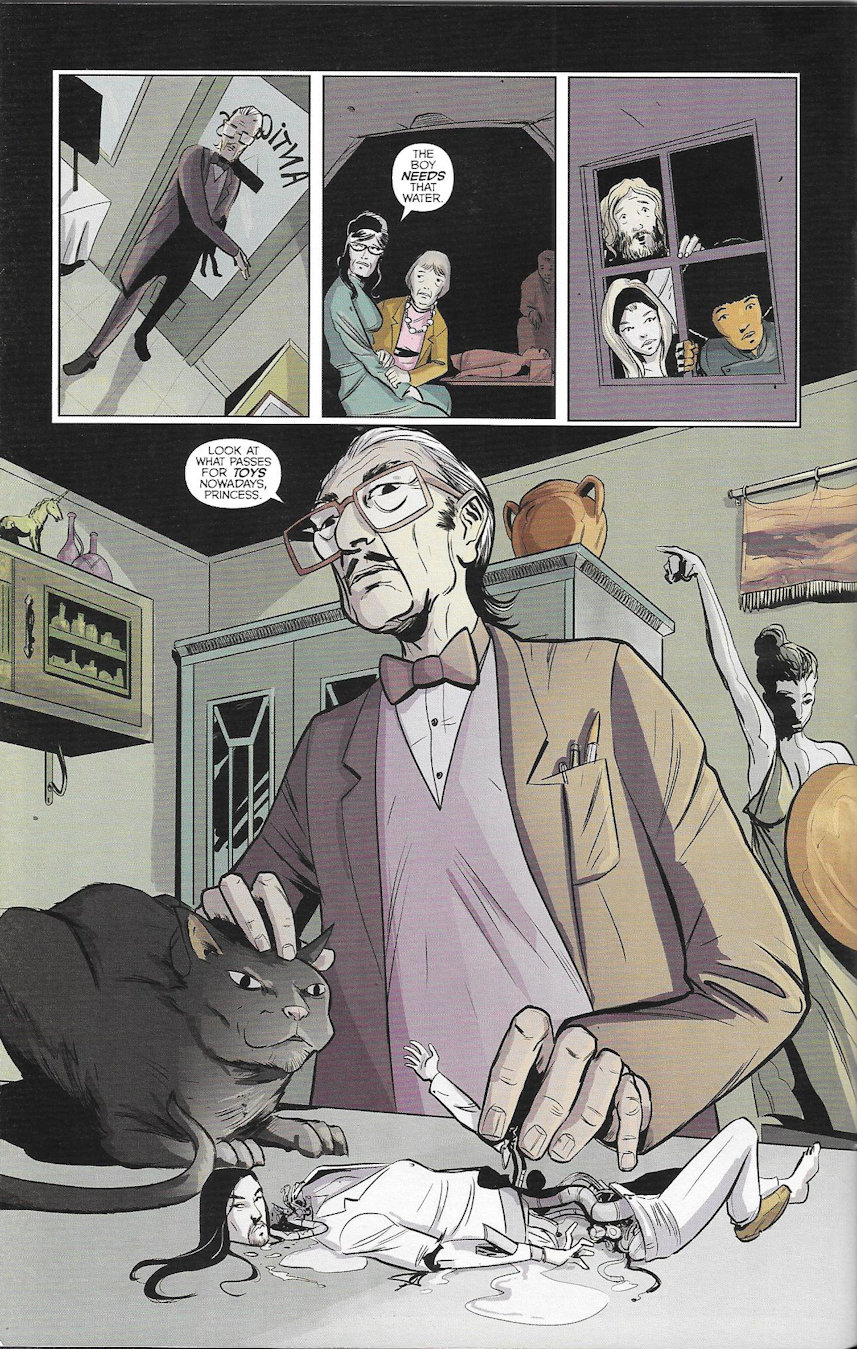 And that’s where this issue ends.

I kinda wished it would have gotten a complete ongoing run. Certainly it is derivative of Allen’s series, but I enjoyed it anyway. The art isn’t much to speak of, but it is serviceable and the story, while abbreviated beyond believe, hits enough notes to make Colossi a pick up if you enjoy this type of thing.

Posted by SonOfCthulhu at 7:23 AM