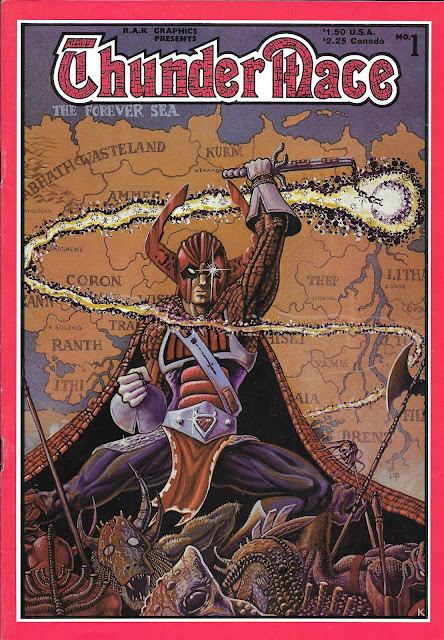 We are back from our Wakandan adventure and stepping back into the Sword and Sorcery story genre for a bit with Thundermace #1, a book that has…problems.

I picked this fella up at a half-price and had a good feeling about it. One flip through its pages showed competent, well-illustrated panels in a splashy style that I found impressive. But there was a bunch to get through, so I set it aside for a later read.

When my two-month long fantasy binge started, Thundermace came near the top of the stack of books I took out of the longbox-and-a-half that make up that portion of the Crapbox. That positioning was intentional. I had gotten my hopes up.

Because, like so many first efforts, this book lacks something so important. And it’s not a little thing, but a critical element of storytelling. The artwork is fine and even inventive in places. You can heap all that praise on Robert A. Kraus’s doorstep. Kraus has his own studio, made possible by the character in the backup feature, called Chakan, getting his own Sega video game. If you want to check out more from him, Here is a link to RAK Graphics where you can see some of his otherastonishing work.

But the story? It has a problem that ends up making the book feel like an exercise to read and not a joy. Let’s break this one down and I’ll show you.

We begin with this young lad, who following cliché is the finest and swiftest warrior of (insert town name here), carrying a mace up a mountain to a dark cave. I like some of this apart from the art. The word choice is fresh and the vocabulary isn’t limited like many first efforts. True, this seems like a bit trite and overused hero myth, not to mention the question you have to ask about the best warrior leaving in the middle of the most critical battle, but the art gives much of it a pass. Maybe it will get better. 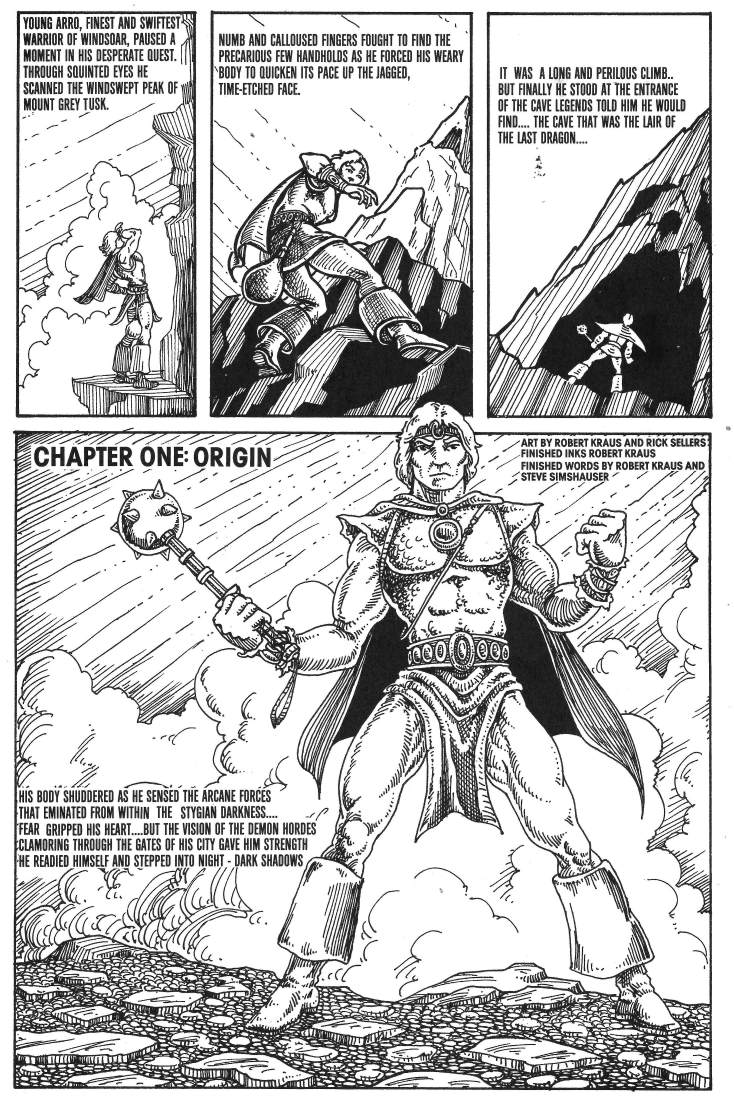 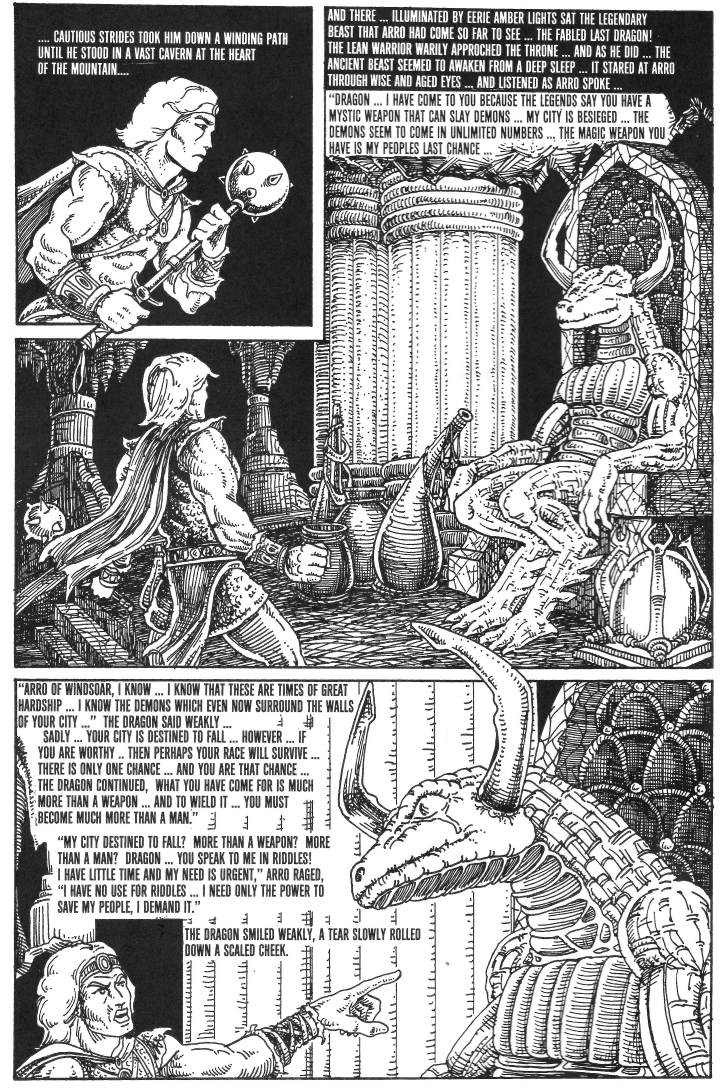 I said it through all this exposition. This hard to read, non-serif font that made me crinkle up my eyes trying to get the gist of the story and not fall asleep. 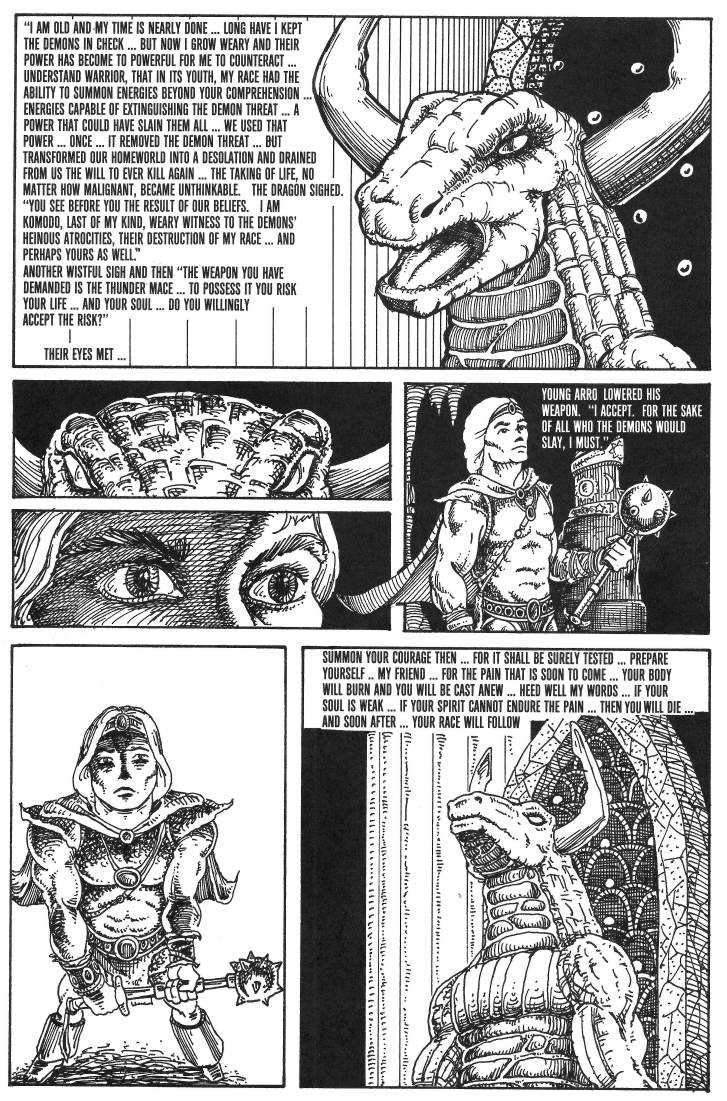 The book tends to front load the first few pages with heavy exposition and this is the first of a couple of big problems. We get in a handspan of pages the entire storyline dumped on us. There is a delicate balancing act that the writer misses here. That readers like things to unfold gradually  giving them some feeling of mystery and intrigue. 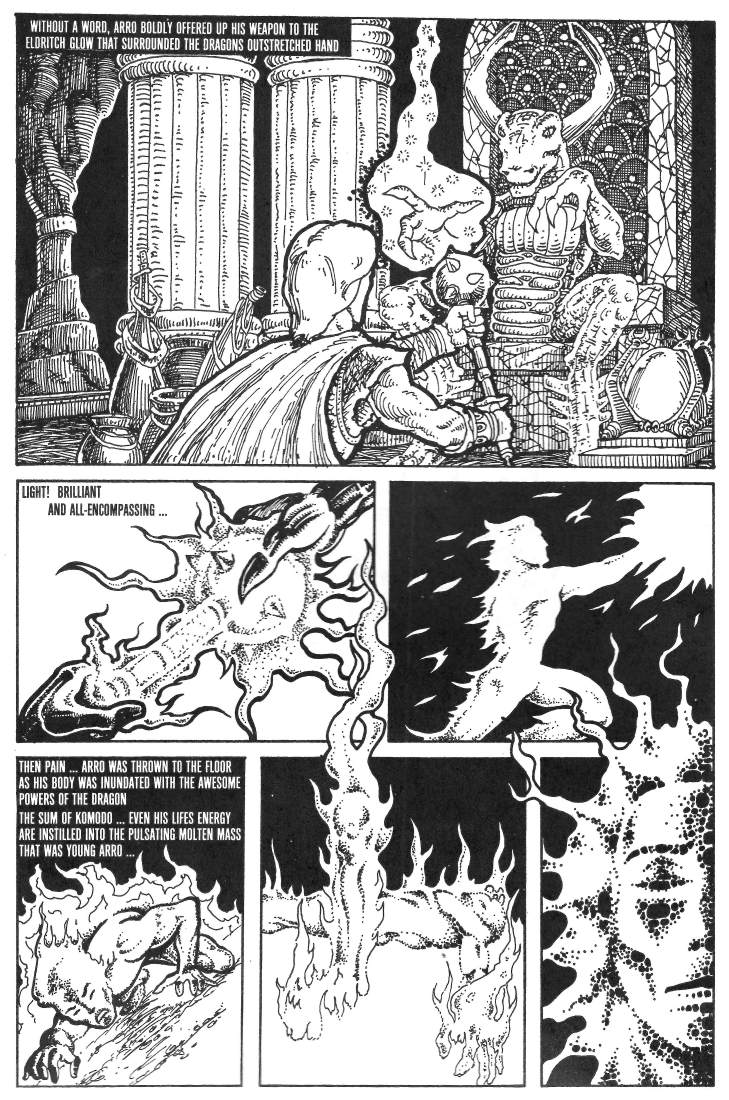 …a ham-fisted one page explanation of how they came to this planet to fight the demons but lost their ship in the process and the dragon's history of being hunted by humans. Again this is all kind of just handed to the reader as dry exposition in a very “tell not show” way. 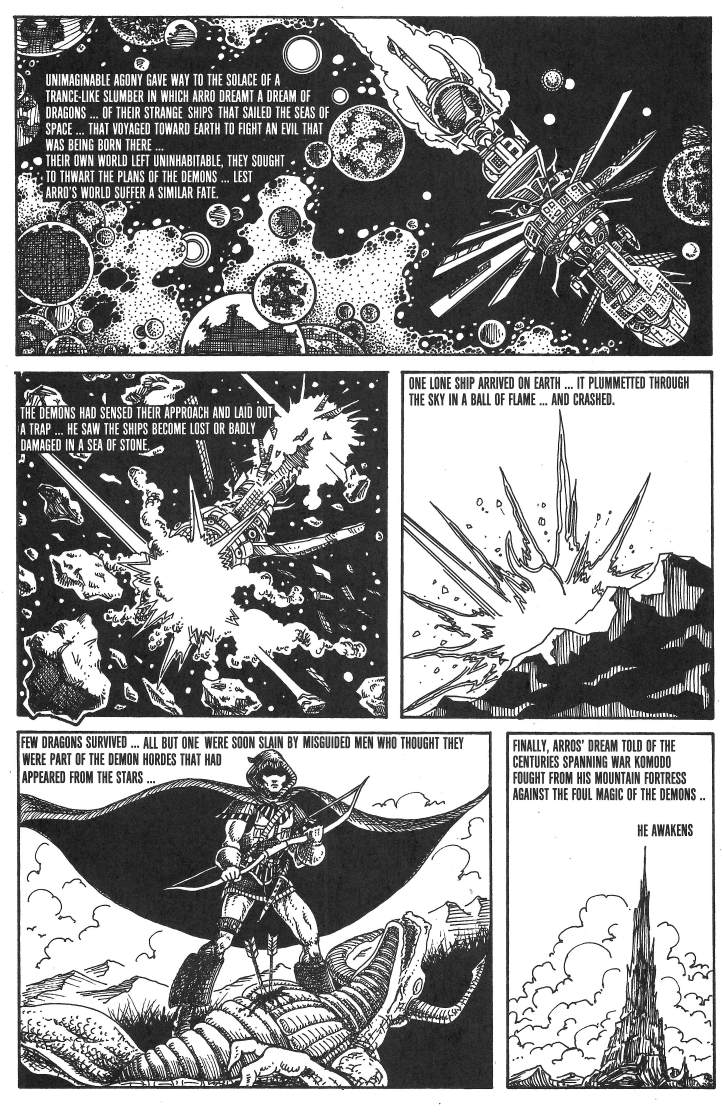 Around about this point I started having issues with the pacing of the book and made some mental notes of what it needed to make the story better. For one thing Arro doesn’t have a personality. He is pure archetype at this point. It would have been so much better to have a second character to flesh out his own with some kind of banter. Perhaps about the dragons and their history? Some of the backstory presented here could have been voiced by the second character as a rumor as to how they came to be on this planet. We could learn Arro’s quirks, his hopes, his loves, and perhaps come to invest in his quest to save his kingdom. 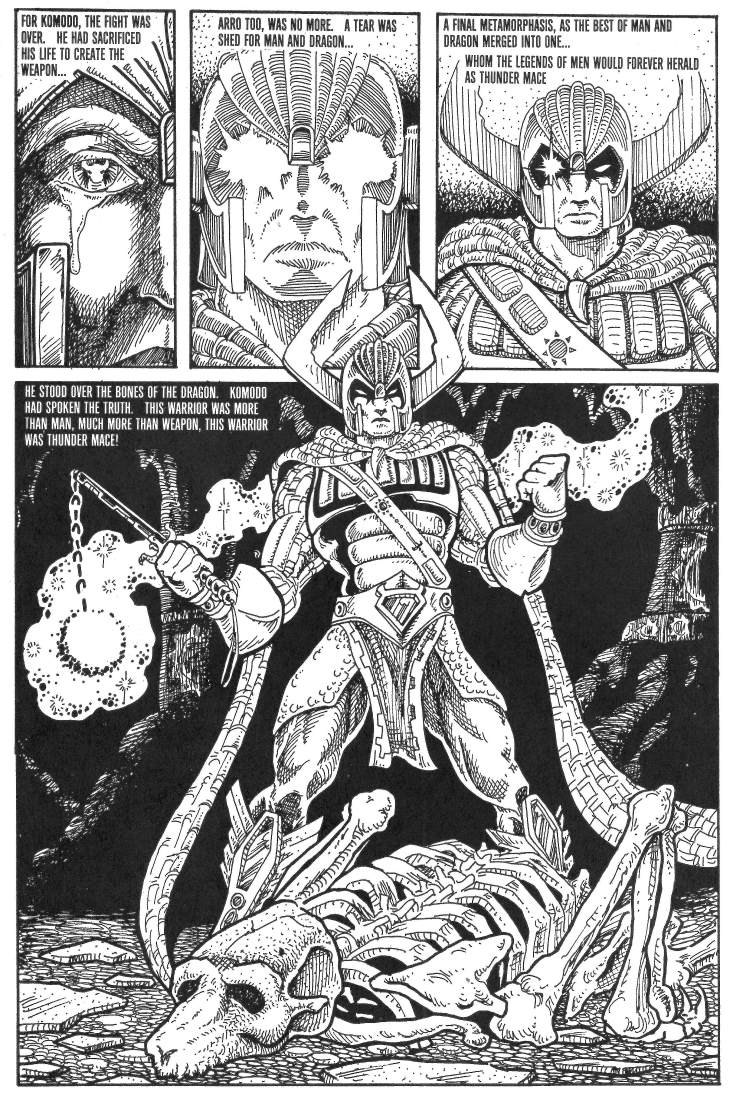 And I say all that because what happens next is that Arro is forever transformed into some dragon-human hybrid in order to fight off the demon-hordes. While the book tries to get us to care that he has sacrificed his humanity for the greater good, we just don’t. This is a failing of the writer, a failure to properly introduce the character in a way that makes us see ourselves in him, a failure to make Arro relatable. It’s a rookie mistake. I should give it a pass, but it taints everything that comes after. 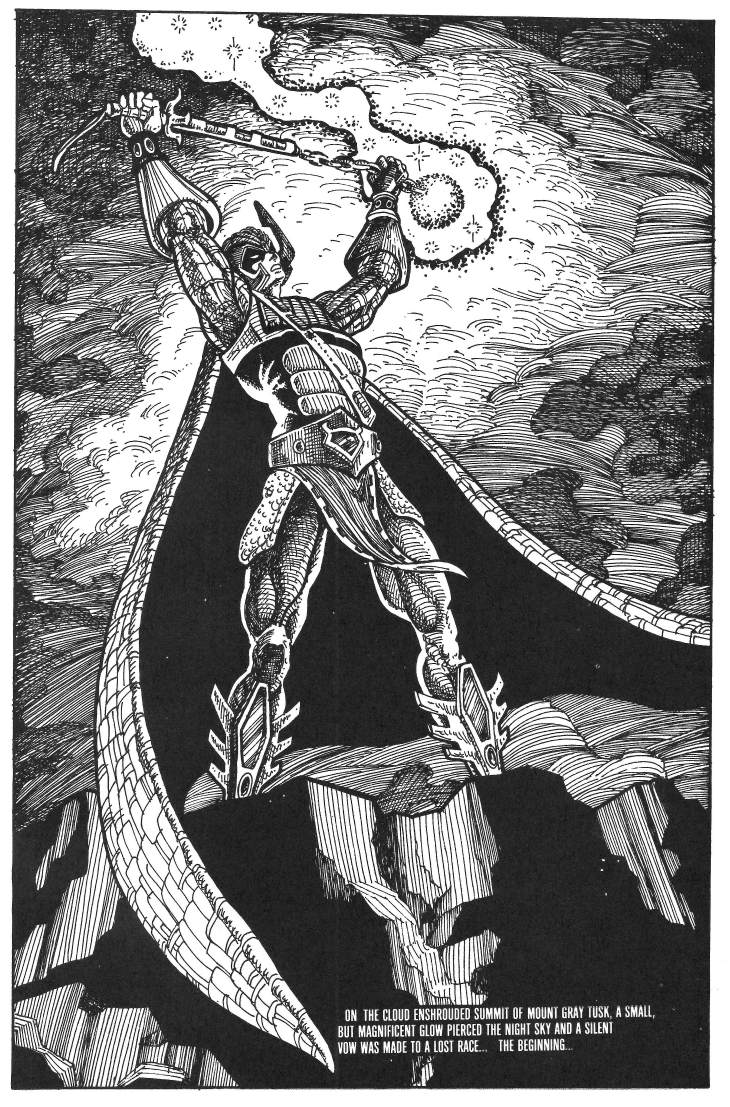 Because now we have two beautiful pin-up shots of this Thundermace guy and I could really care less about how powerful and magical he is. 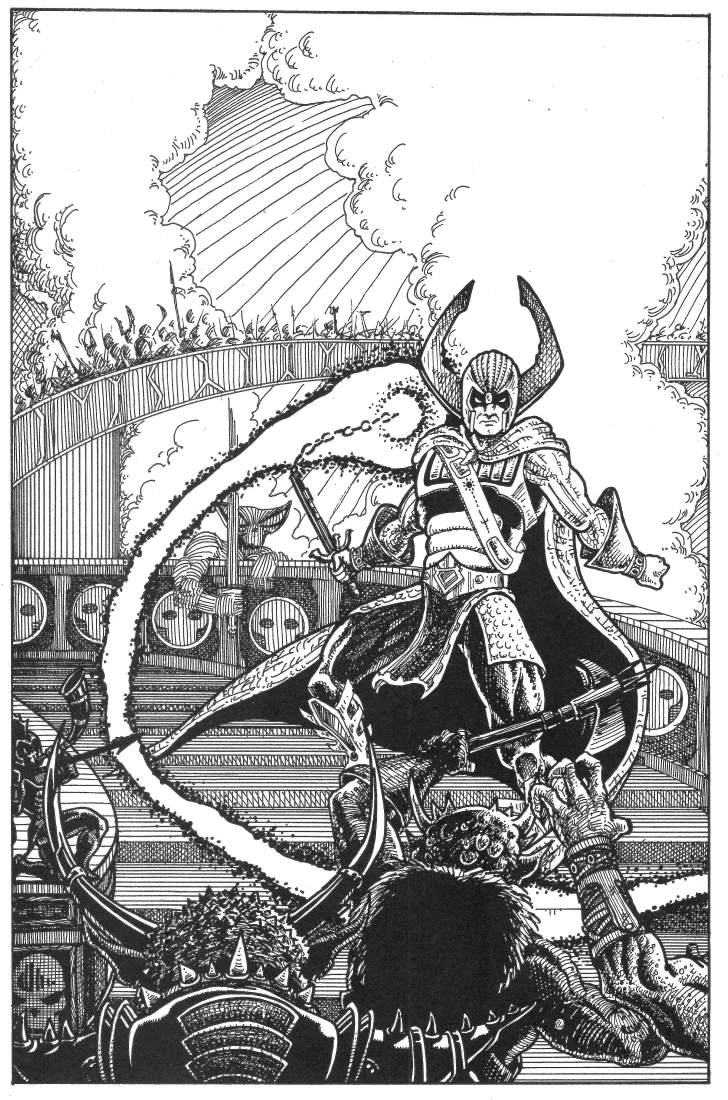 The writers try to resurrect this mess by having Thundermace rush to his city only to find it utterly destroyed. The one person he does find clinging to life… 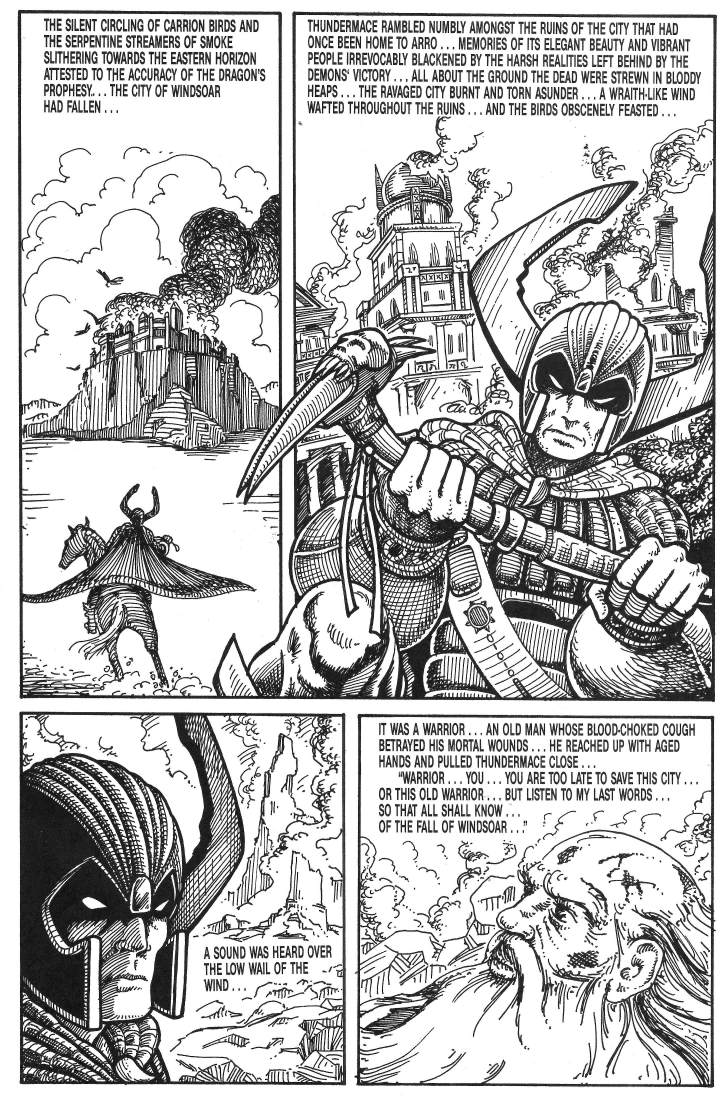 …gives him two pages of exposition so bald-faced that the artist doesn’t even depict the action in panels but just as an odd kind of storybook boarder. There is great stuff there artwise, but storywise the book isn’t cutting it. 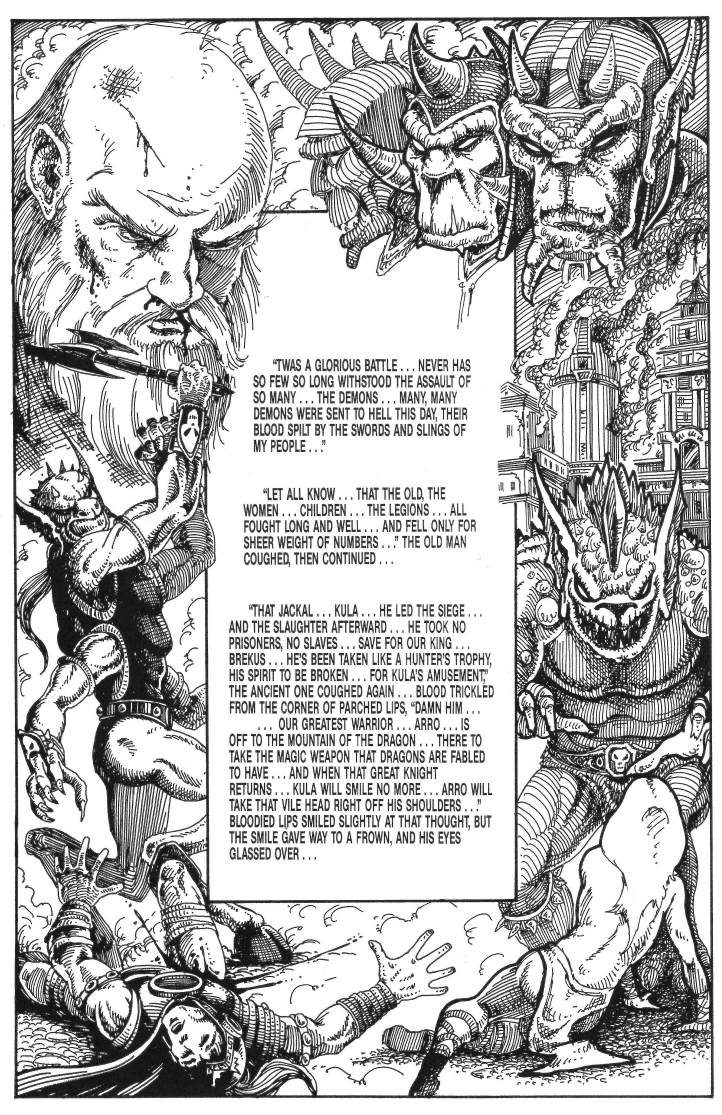 And the real test of how badly this is playing comes when we get to something that should tug the audience’s heartstrings and it falls flat. Arro’s wife was among the slaughtered, but given that I don’t care about Arro then how can I care about his plight. I have no emotional attachment to cardboard cutouts, no matter how well drawn they are. Give me a good backstory and I’ll bite. Until then…well, the pictures ARE pretty. 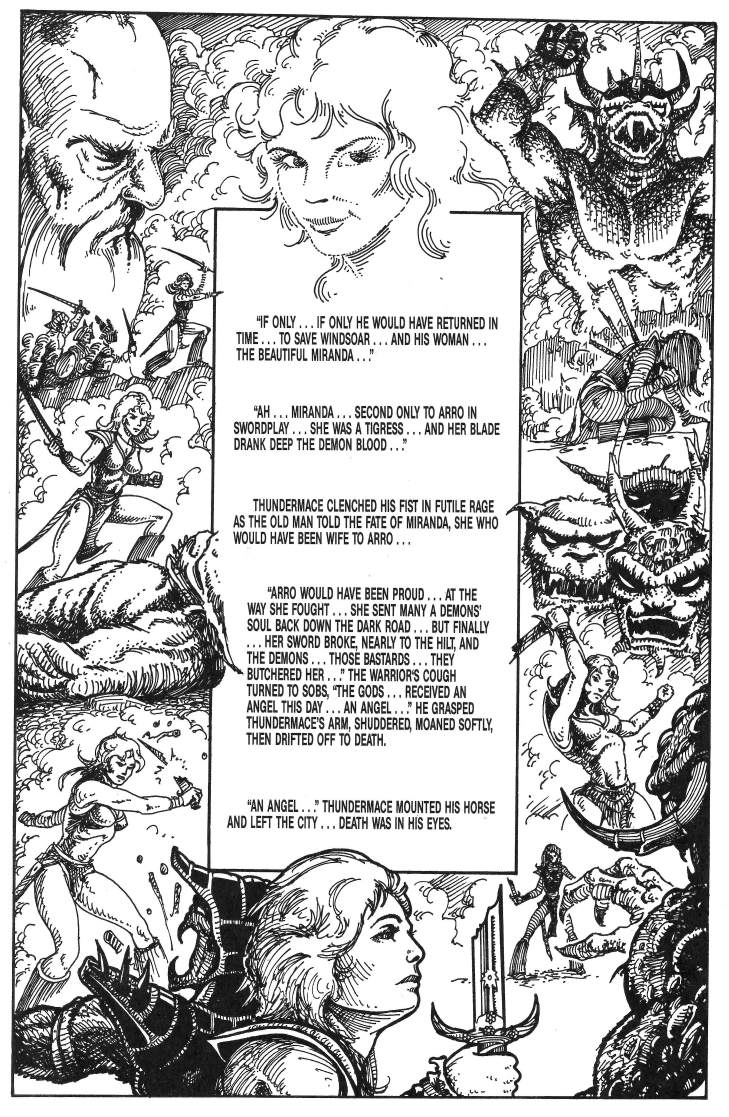 Then we have Thundermace assaulting the castle of the demon that killed his wife and destroyed his town. With no interlude showing his emotional state, I might add. But hey! Cool castle pic. 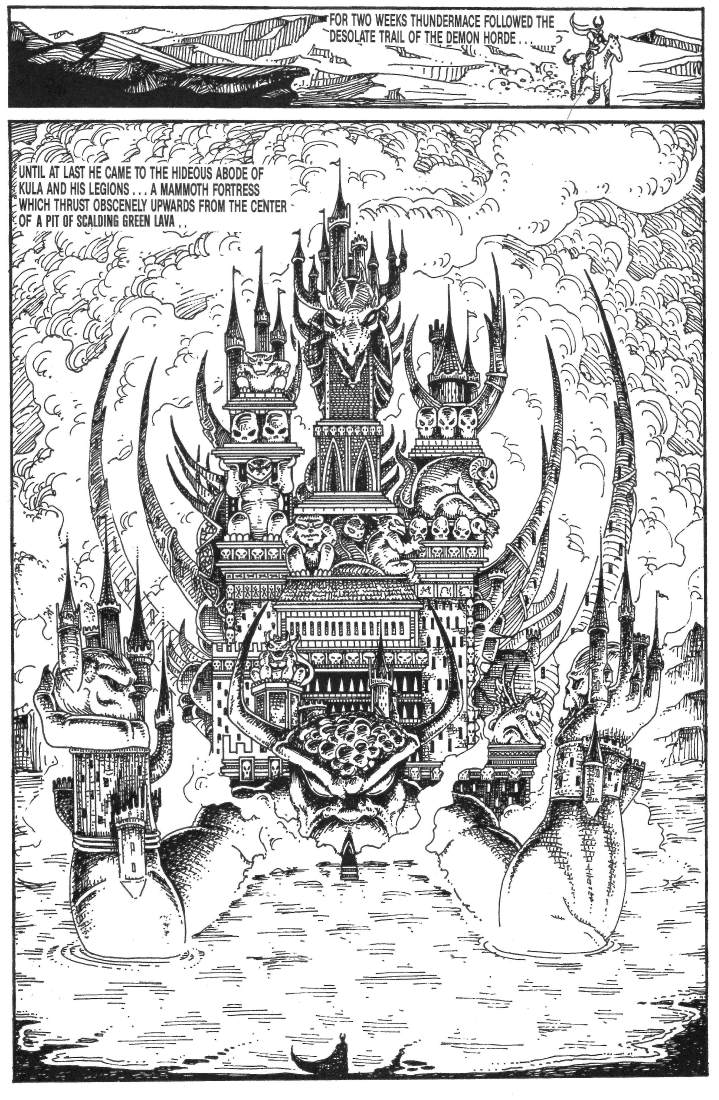 Thundermace pulls out his enchanted weapon at this point and things get WORSE. Because in a book where there is an emotional disconnect between the audience and the story the last thing we need is… 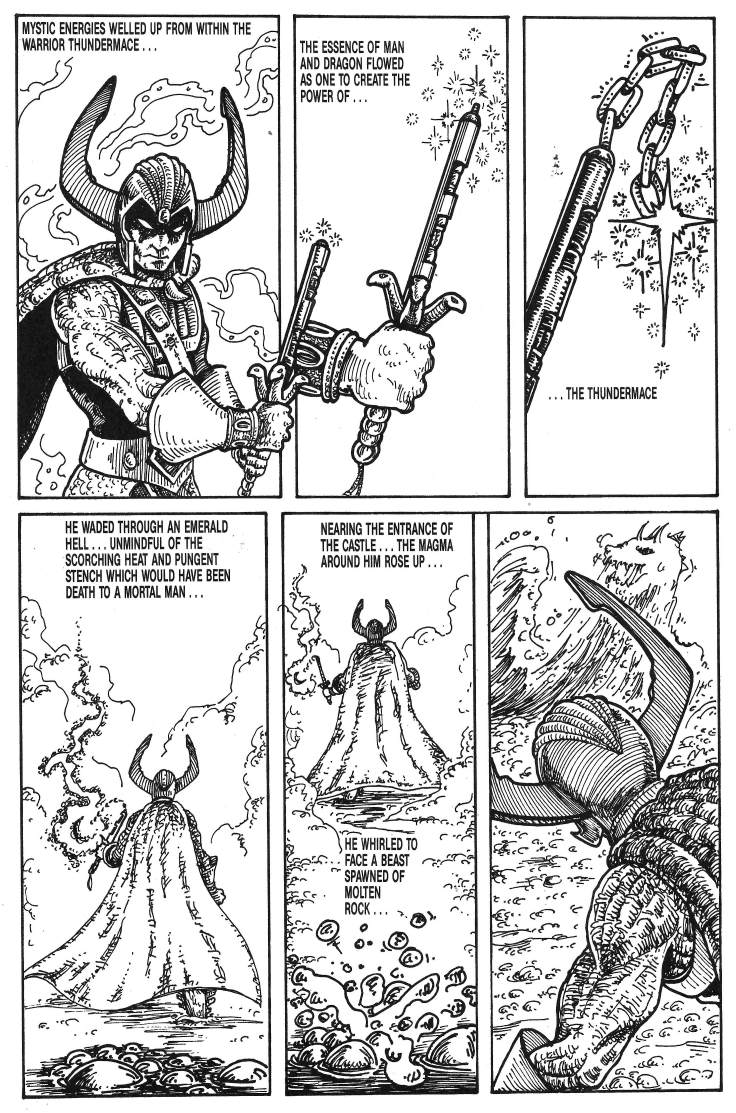 …a series of encounters where the enemy appears… 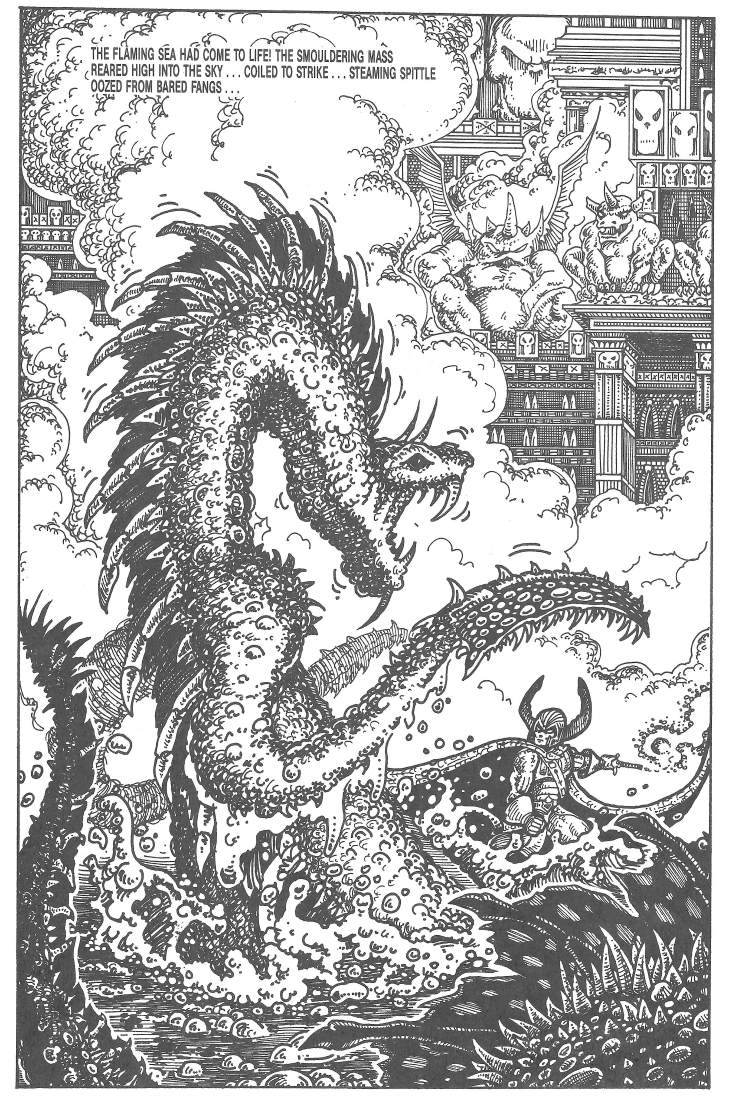 …and he kills them in one blow. Then… 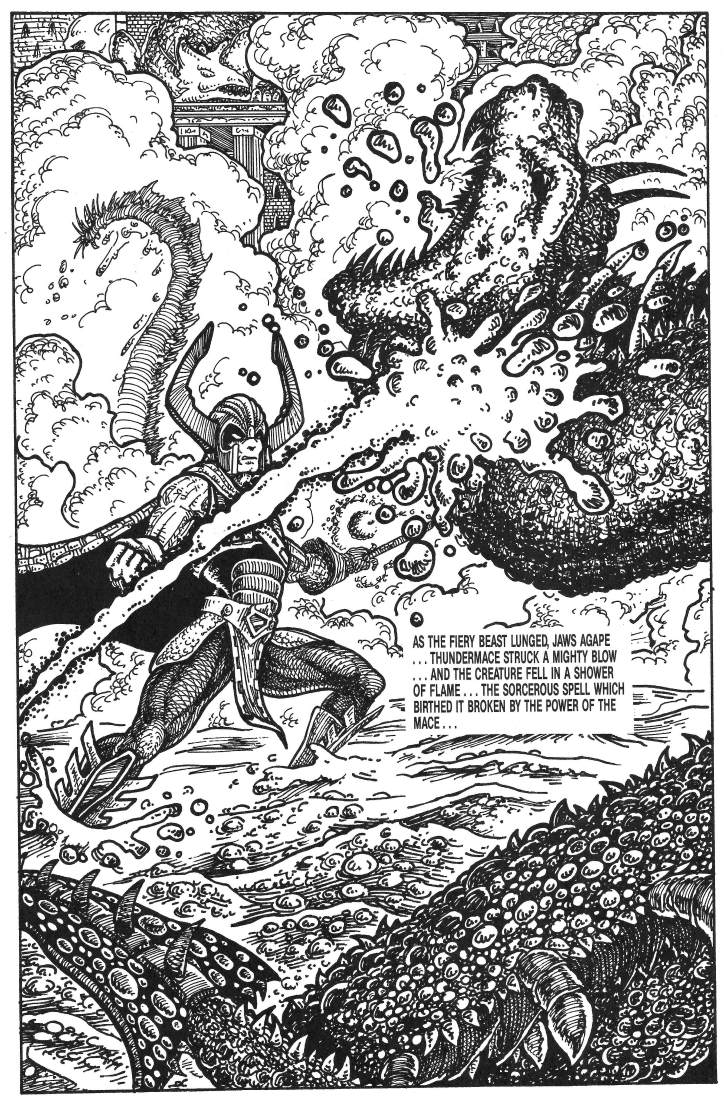 …a horde of enemies appear, and he kills them with one blow each. Next… 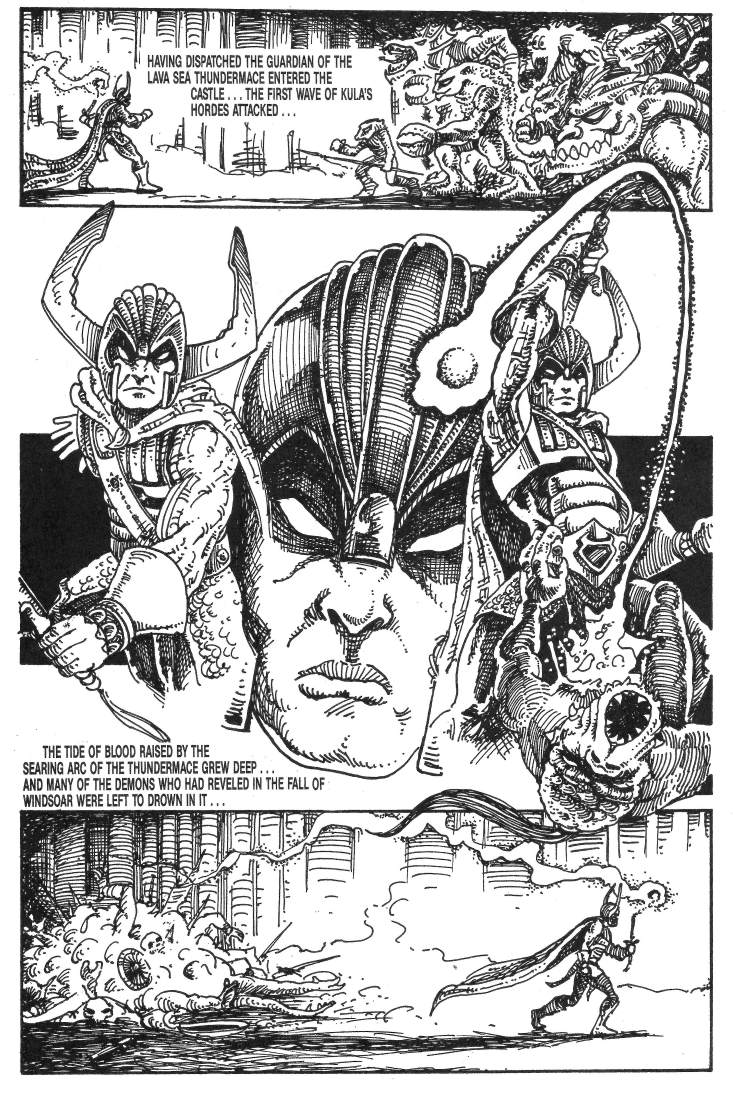 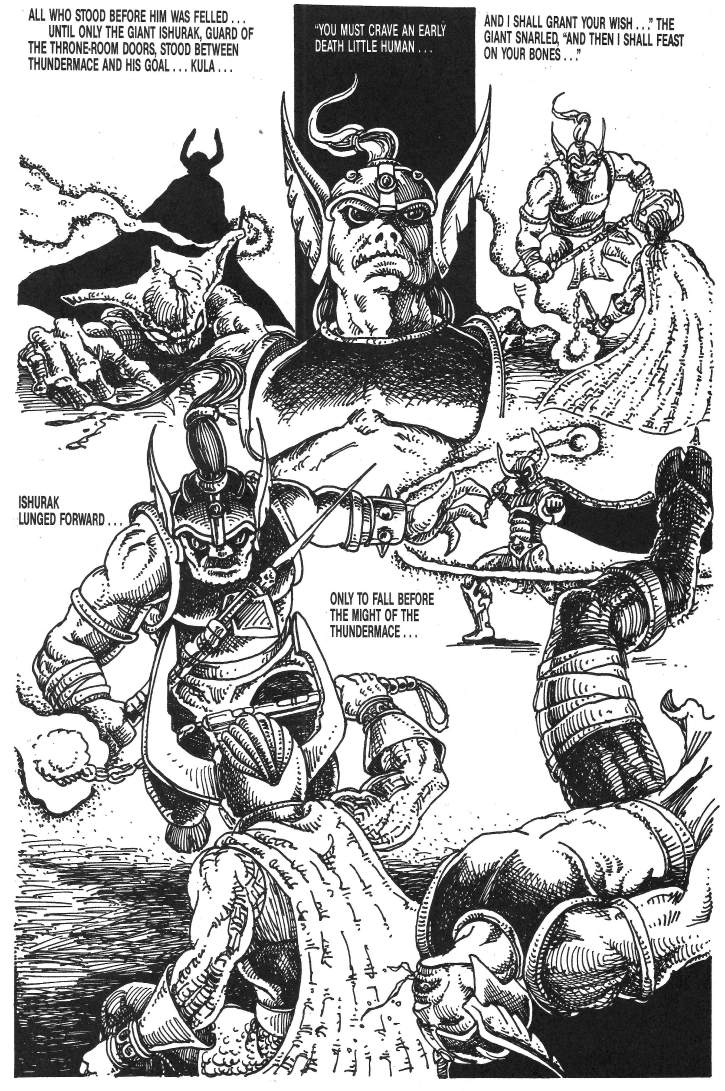 This on-a-rail, overpowered non-sense may play well with teenagers, but most of your audience realizes that if the protagonist isn’t given any challenges then we soon lose interest. Making each battle so lop-sided doesn't make us think Thundermace is the coolest character ever, it makes us bored. So much so that by the time you reach your main bad guy… 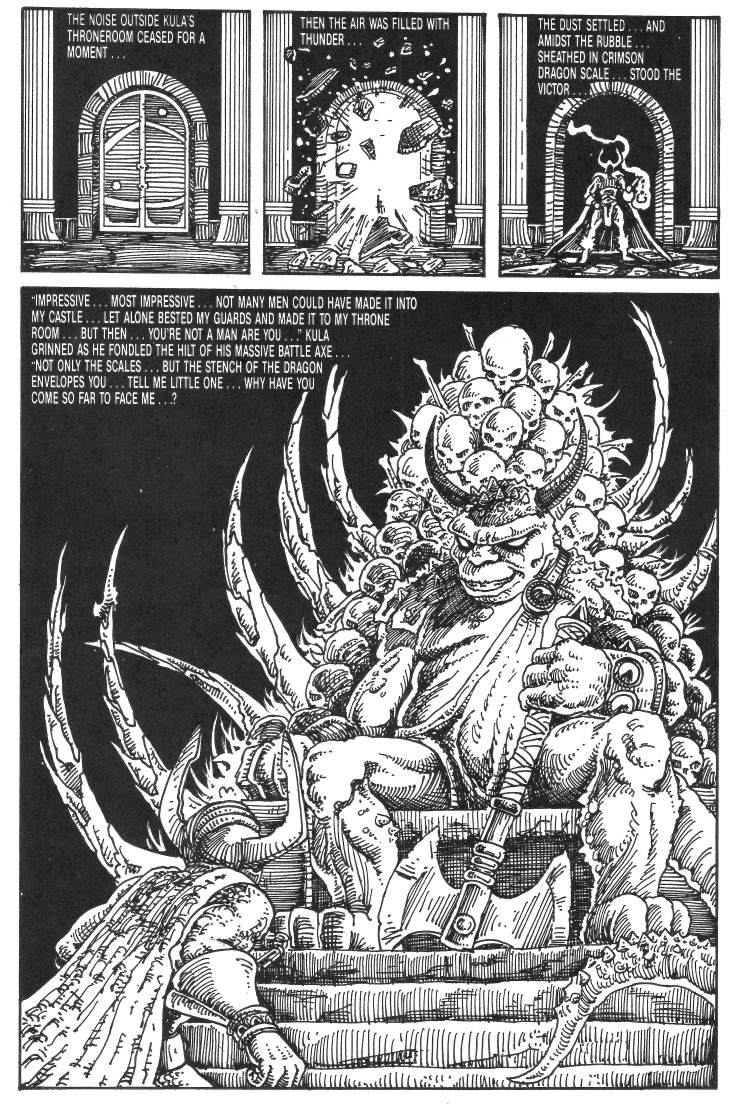 …the audience has tuned completely out. 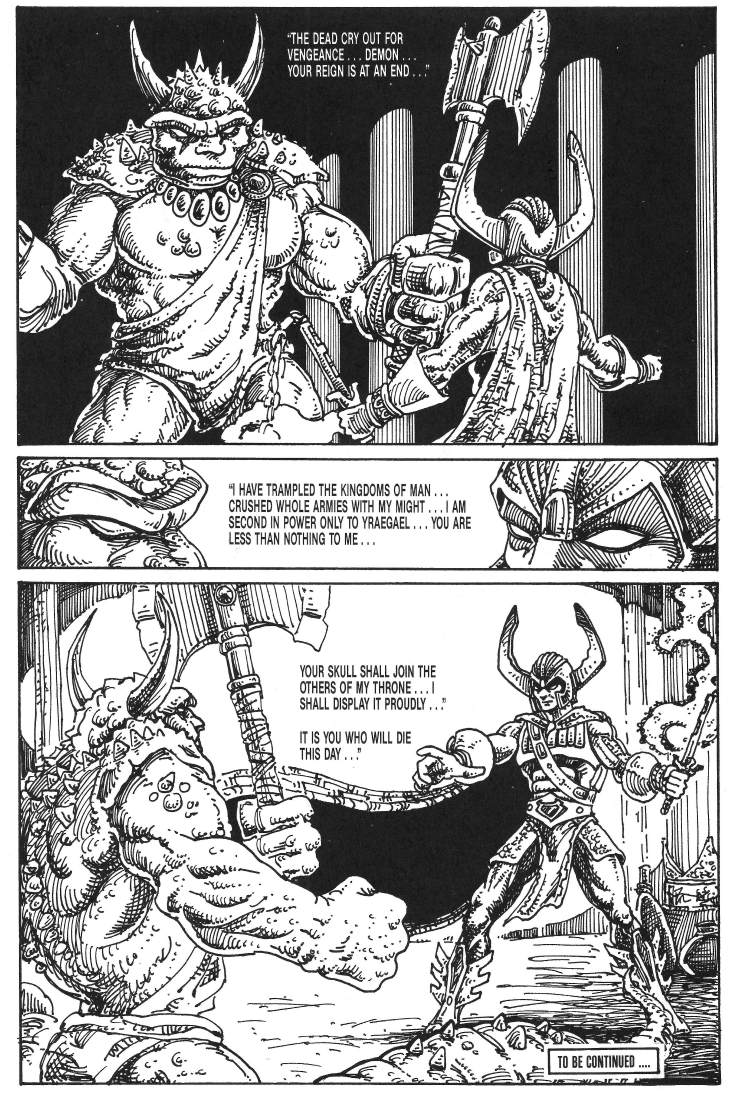 What? oh, he didn’t defeat Kula and it is continued next issue? Well, that will be a short book. One panel of Thundermace hitting the big-bad and it will be over.

This book frustrated me greatly. I love the art. Some of the boxes might be simplistic in design however the panels were easy to understand and conveyed motion and proper sequencing. The art and the mechanics of comic book form were paid proper adherence to. And I am seriously impressed by Kraus’ skill as a penciller. Just look at this pin-up and his web page to get an idea of how well he can draw. There are some brilliant pieces on display there. 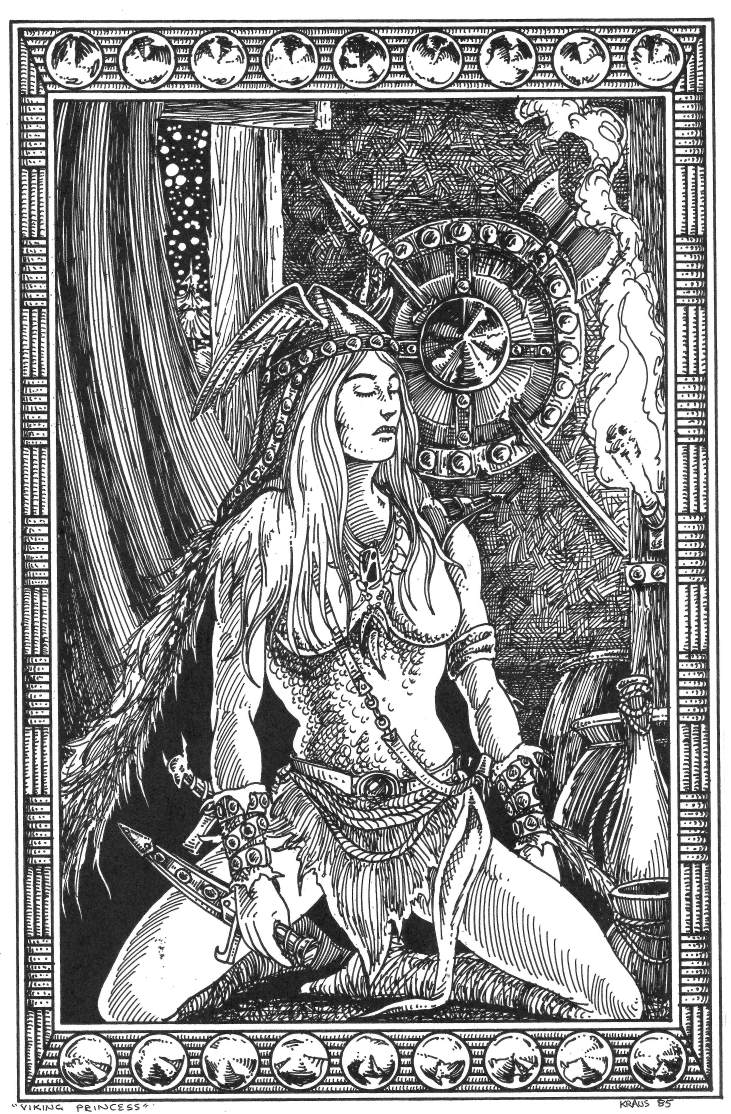 But the story needs a complete overhaul. The absence of actual emotion and personality of his central character prior to the transformation means we have nothing to grasp on to after he is granted god-level power at the price of all he loves. And while this simplistic story structure might cut it with some, I can’t invest in a story devoid of humanity and personality. Thundermace needed a different writer or a third person doing the editing that could tell them what worked and what didn’t.

Sorry, Thundermace. With me, you just struck out.
Posted by SonOfCthulhu at 2:54 AM