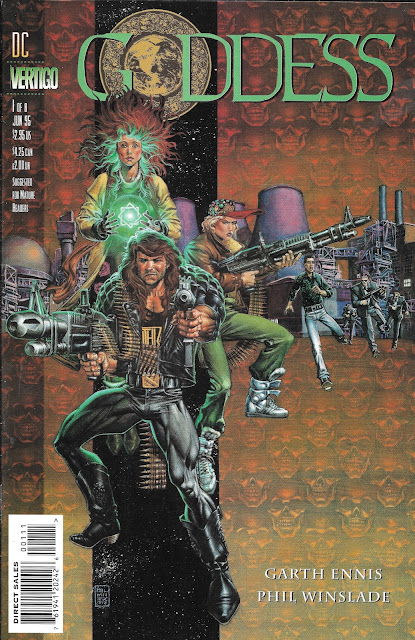 Gross and mean and funny.

We’ve spoken of Garth Ennis before. He’s the mad Irishman who created such hot sellers as Preacher, Hitman, The Boys and who had fan-favorite runs on Punisher and Hellblazer. His work consists of violent, action-packed page turners that make you feel a little dirty for loving so much.

Take his Goddess miniseries. Now, the Crapbox didn’t give me more than one issue of this modern-day fantasy story, but all the blood, gore, and black comedic characters that are an Ennis hallmark live between that one issue's covers.

We start off in an extreme dolly shot over the planet Earth. We call this Rosie’s story. 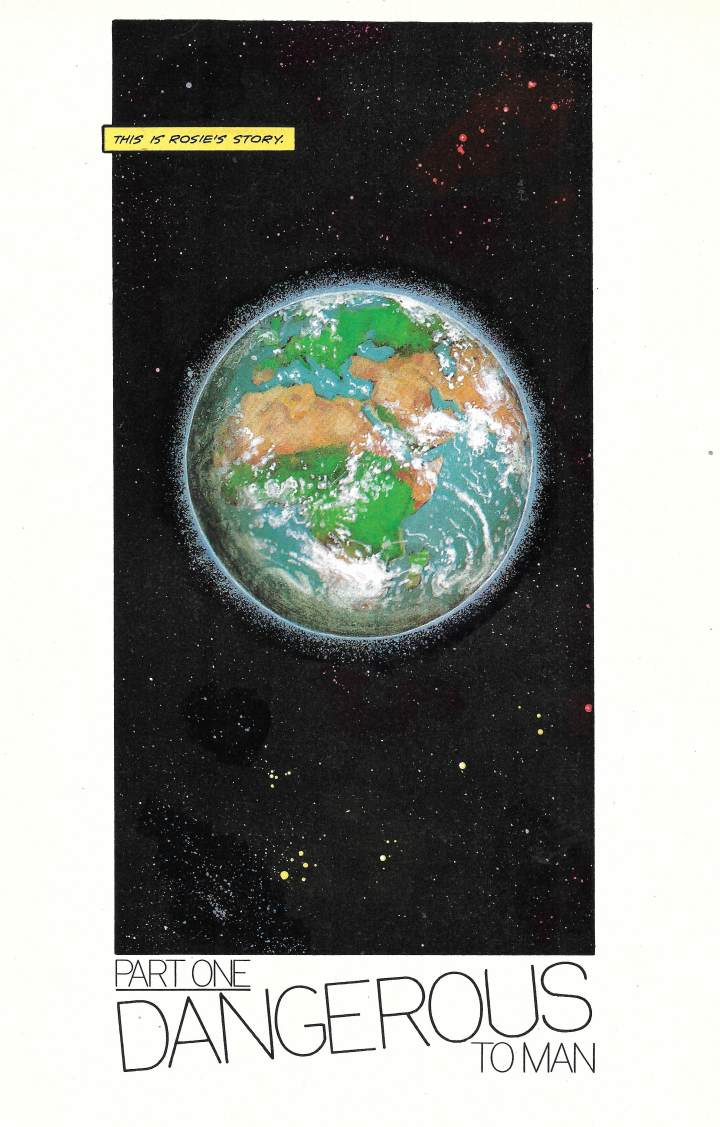 And soon enough we’ve panned down to her walking around while our unseen narrator recounts his remembrances of her, evoking her through eyes that clearly love her. 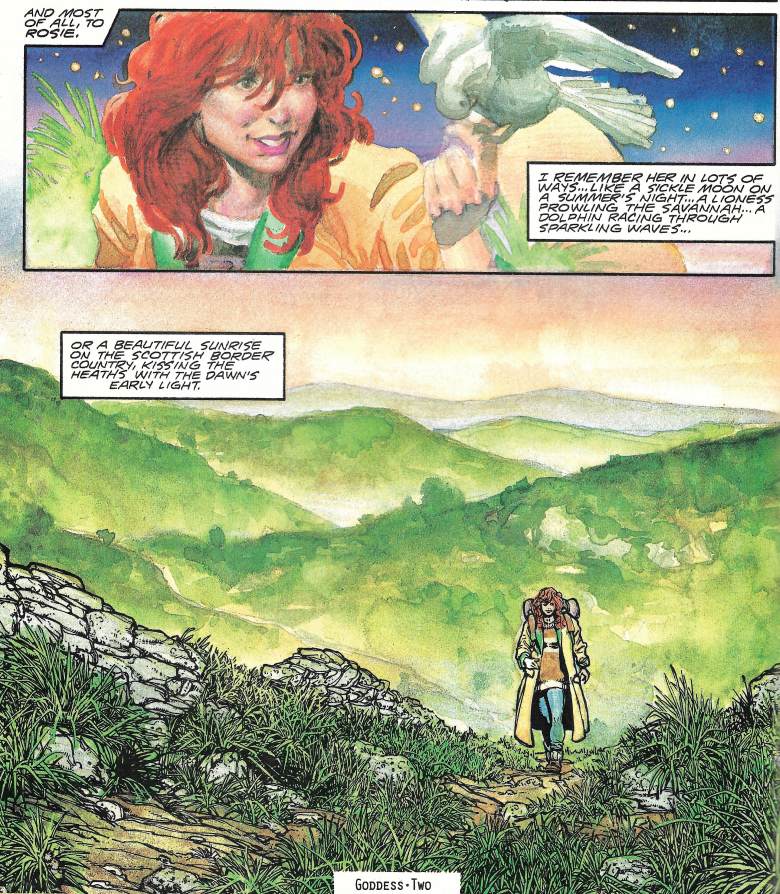 But on this particular day, things for Rosie will change dramatically. As she stoops to stroke a stray partridge, a strange feeling assails her. 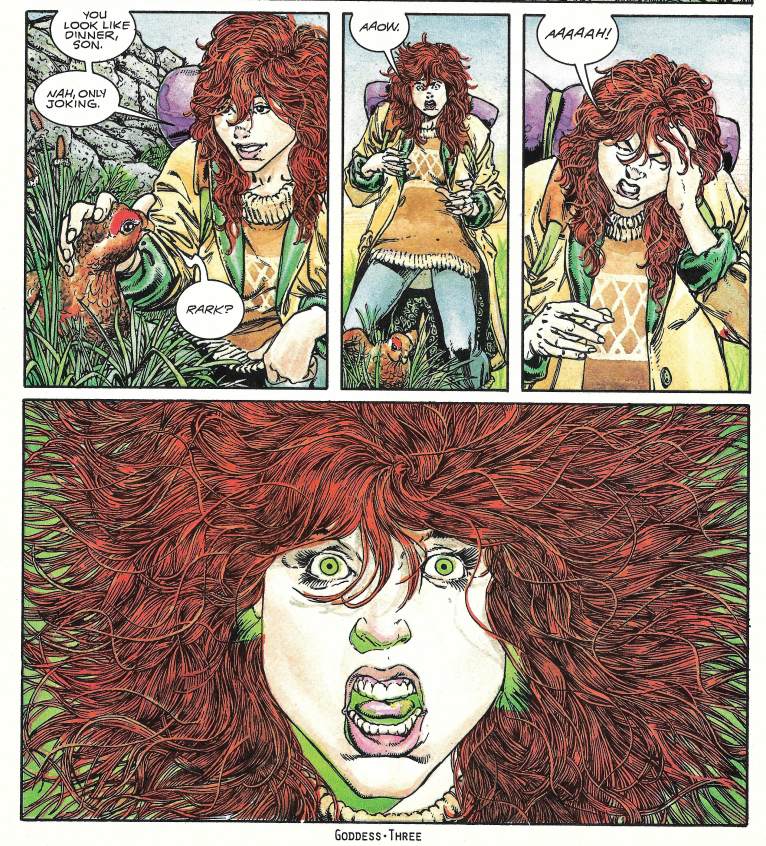 And it’s hear that Phil Winslade’s art really gets to shine. Winslade works in the same way that Steve Dillion’s does on Preacher, it puts pictures to Ennis’s story that match every stroke of his savagery and beauty in ink and pigment. 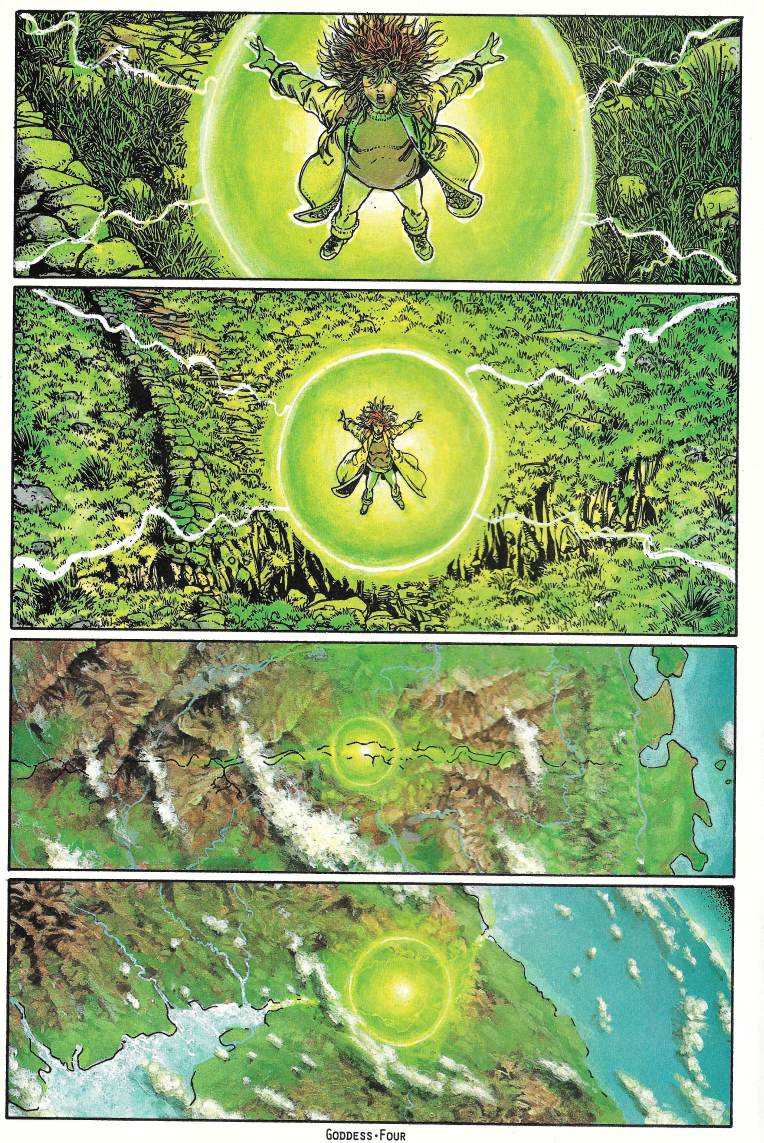 Just watch as Rosie’s spasm affects not just her… 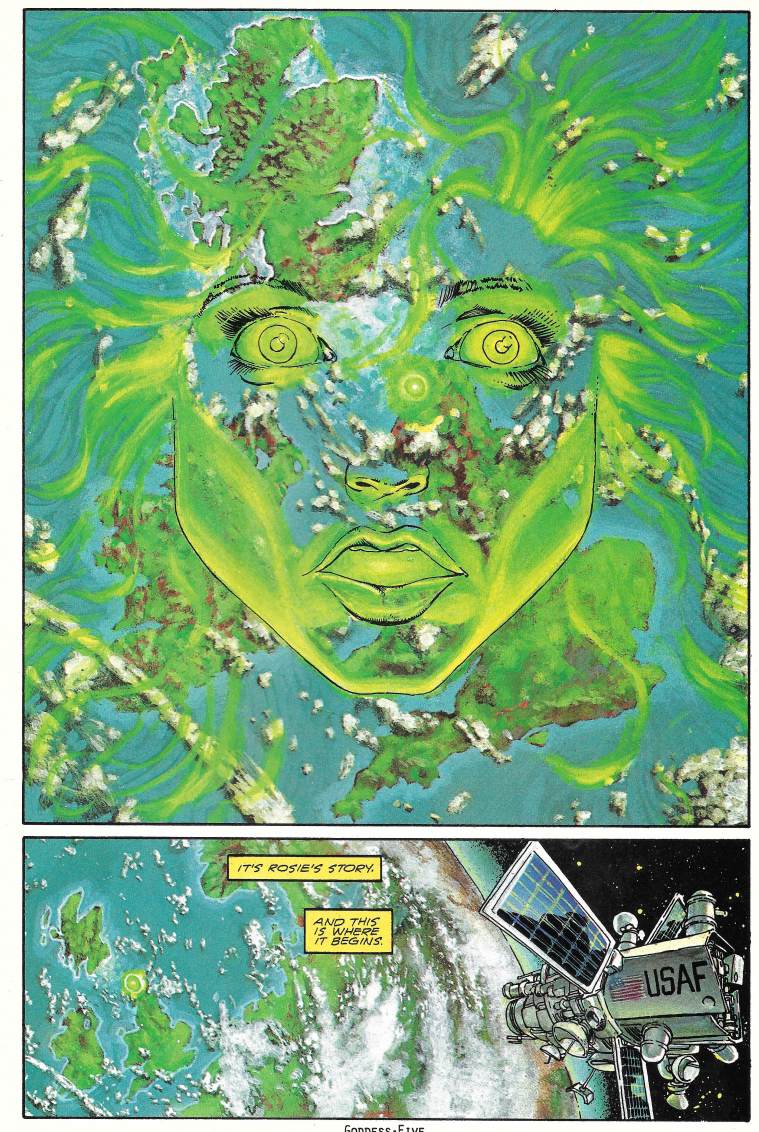 …but all of the British Isles by breaking Scotland free as its own island.

We move on to the second of our cast of four, who is also our narrator, seen here watching the British political world unravel due to Rosie’s sudden land mass shuffling. Speaking of shuffling, his live-in girlfriend appears to be shuffling out with most of the apartment. 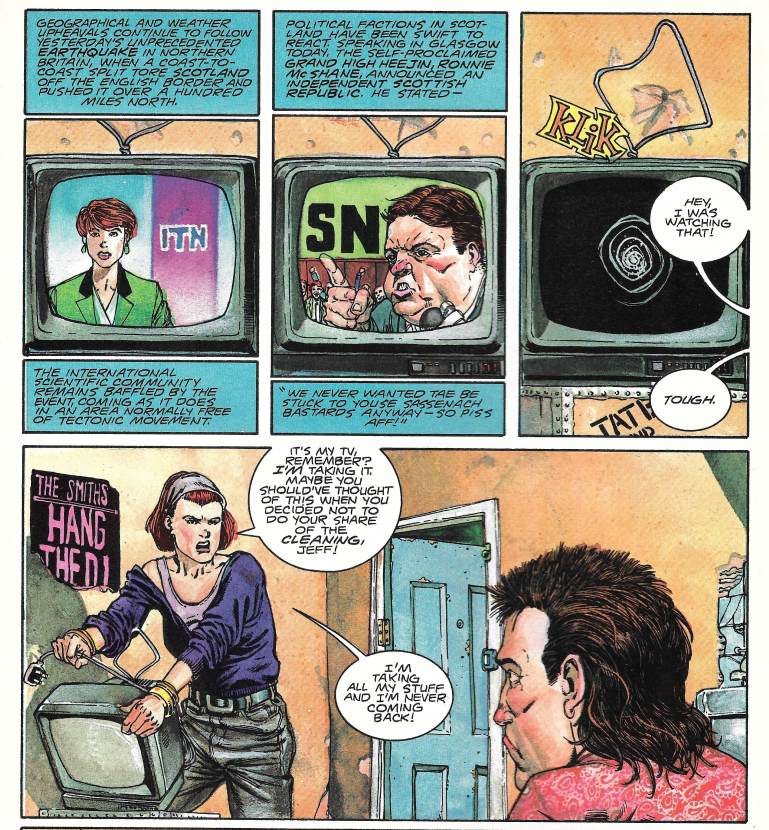 Moving on we find ourselves off the coast of Australia on the boat Nylie’s Dream, captained by the hard-to-like gent known as Mudhawk. Right at the moment he’s about to lose his charter…

…to sharks. Appears his charter is a young rock star from the band XSIV who fancies himself a sport fisherman, only the fish he is aiming for are great white sharks. 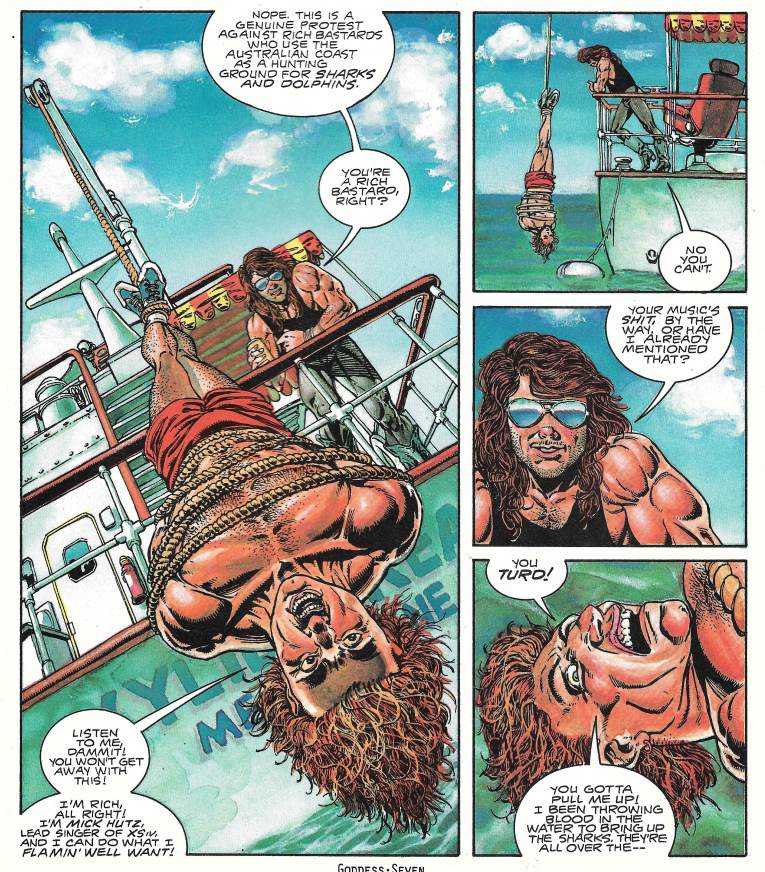 And killing sharks seems to have upset Mr. Mudhawk quite a bit.

Before you ask, yes…I looked this up. The “XSIV” band name was a kicker for me. It appears there is a whole chapter about it in the autobiography of INXS: Story to Story where Tim Farriss caught and killed a great white shark.

Apparently, this didn’t sit well with Mr. Ennis and thus we have a sequence where this darker side of humanity called Mudhawk tortures the lead guitarist of an Australian rock band… 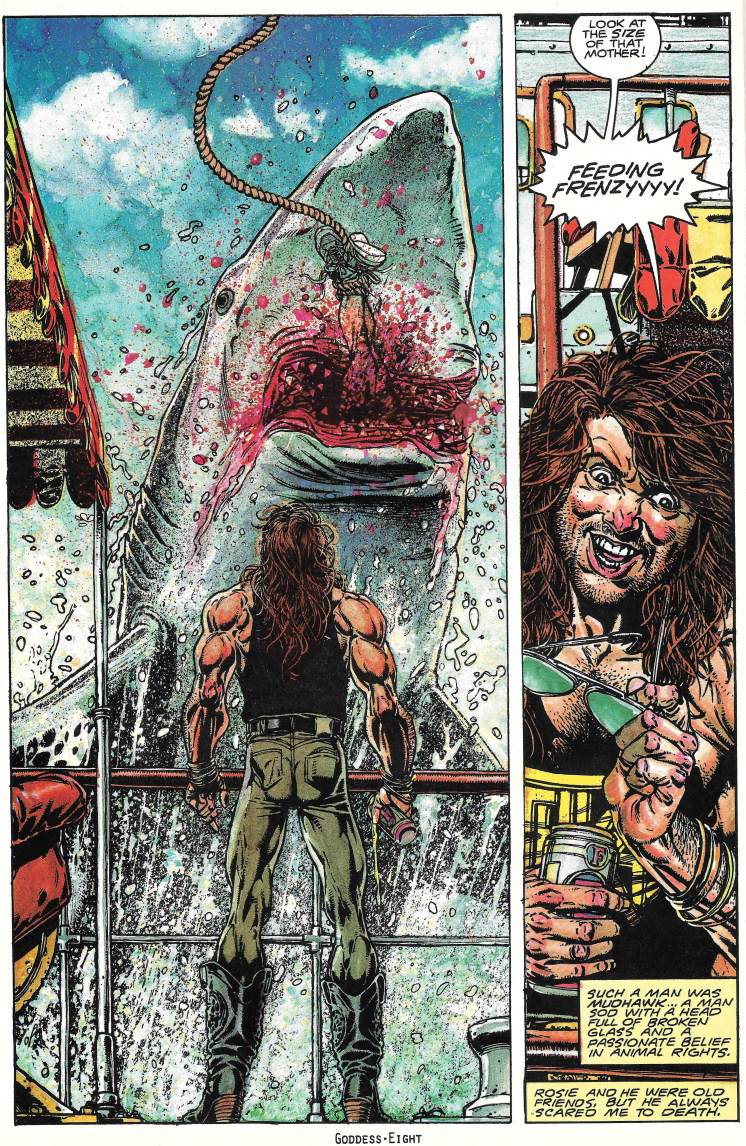 …until he is eaten by a great white shark that he had hoped to catch and kill. I’m good with it. If Farriss’s soul can live with having killed a majestic wild animal for nothing more than sport, then he can take someone putting the screws to him in print.

I also have to state that in most books Mudhawk would be the villain of our piece, but not here. In Ennis’s world our villain looks much more like this… 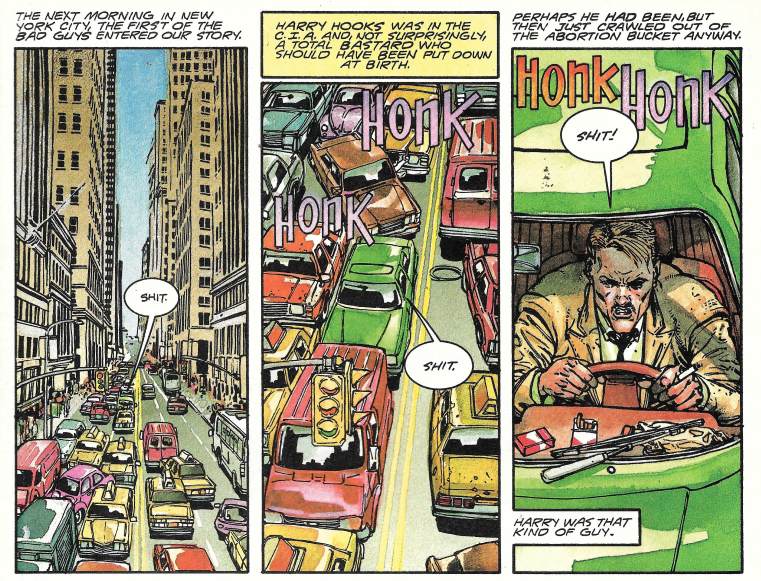 Harry Hooks is exactly the kind of dickhead that will hit a woman’s car in traffic and use his place in the CIA to justify cursing her out for his mistake, calling her a fat bitch, flipping her off and leaving the scene of the accident without providing any insurance information. 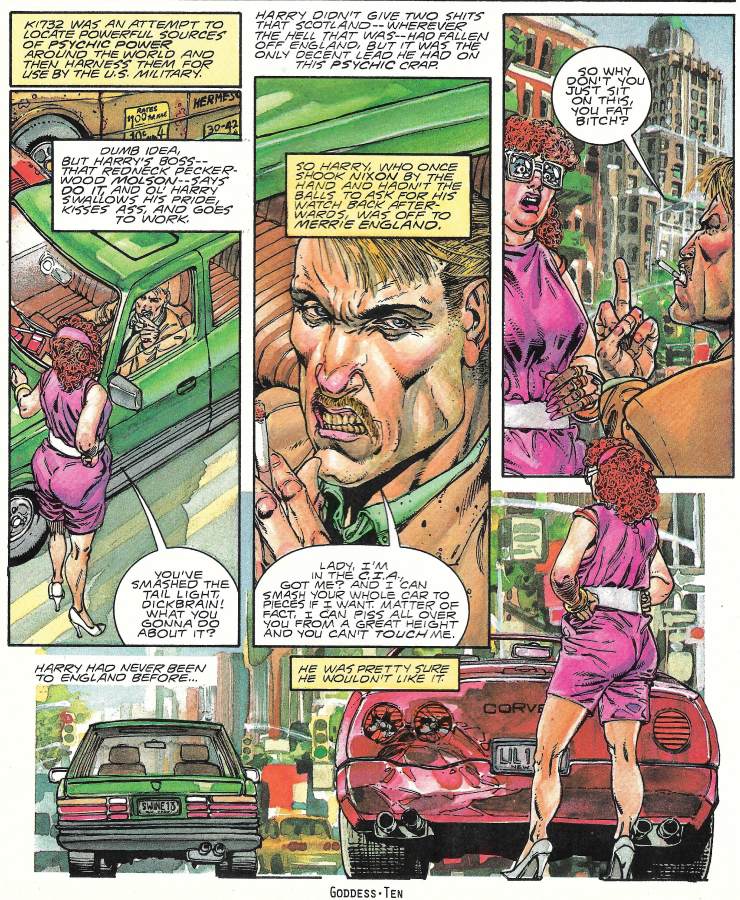 In short, our good guys may be “bad” but our bad guys are much, much worse.

We leave this jerk to head back to Rosie, in the midst of quitting her job at the local zoo when the unthinkable happens… 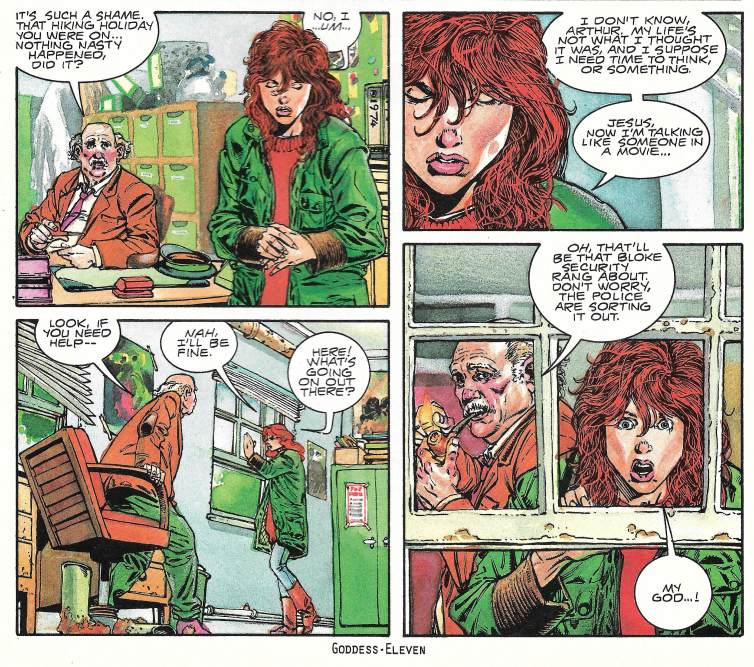 …Our narrator perches himself on a branch over the tiger enclosure in what can only be an aborted attempt at killing himself. While he sits contemplating this act, a bobbie comes along and tries to pull him in. 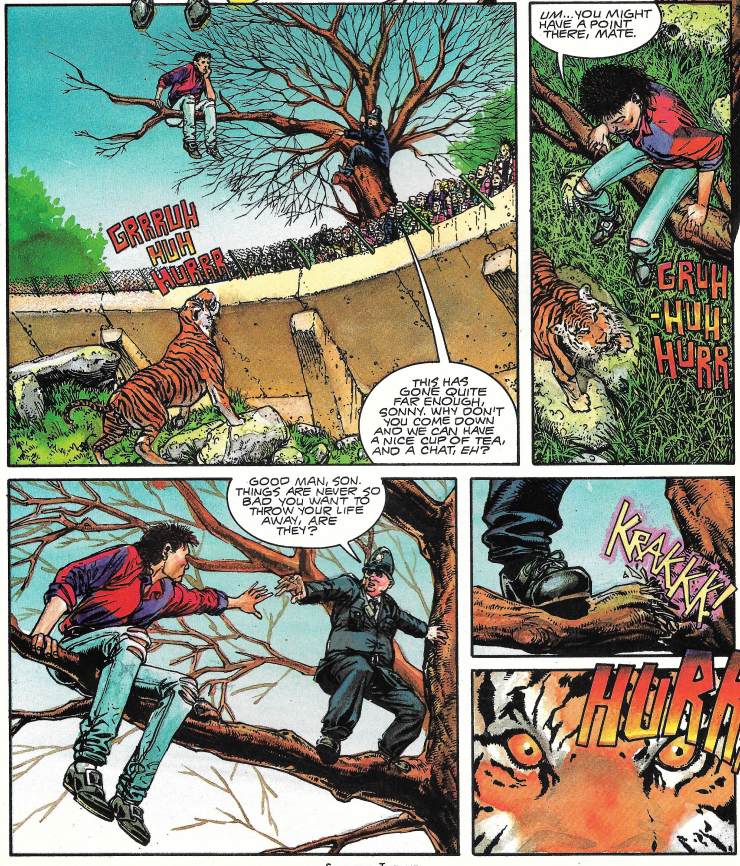 Unfortunately, the branch has other thoughts, dumping the both into the pen. Our narrator ends up the dessert that comes with the meal in this instance. 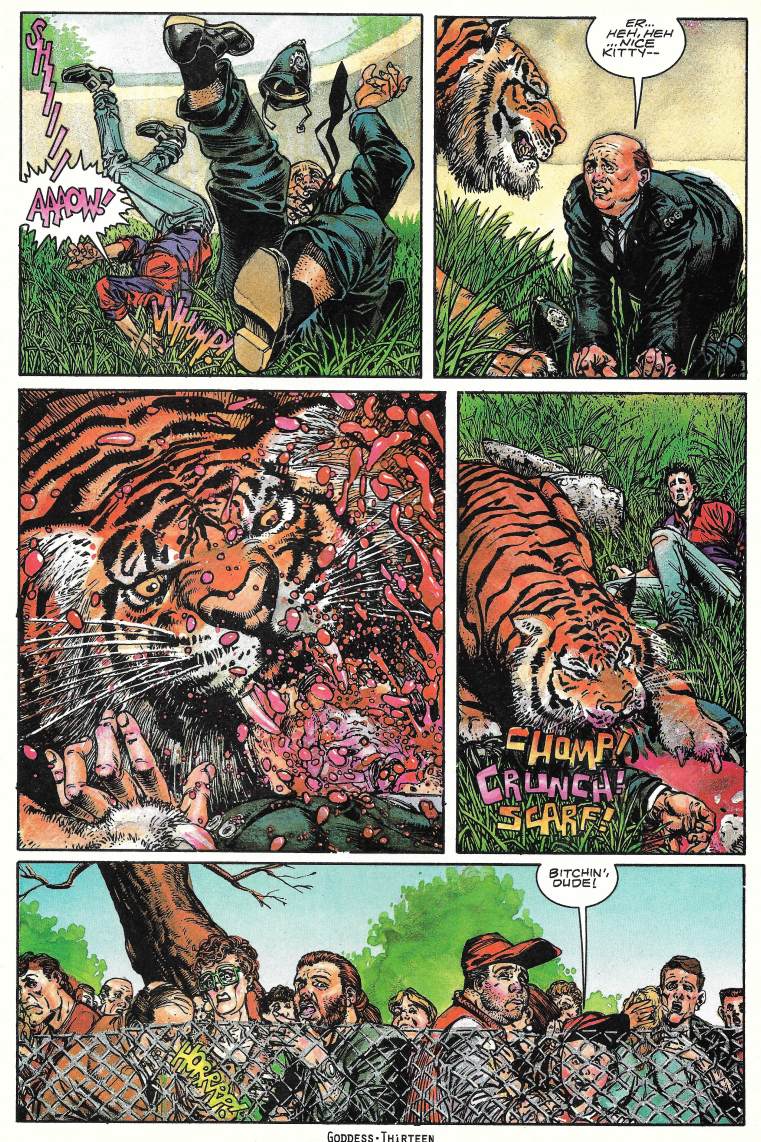 Or not, as Rosie intercedes on his behalf, her new powers manifesting to calm the savage tiger. 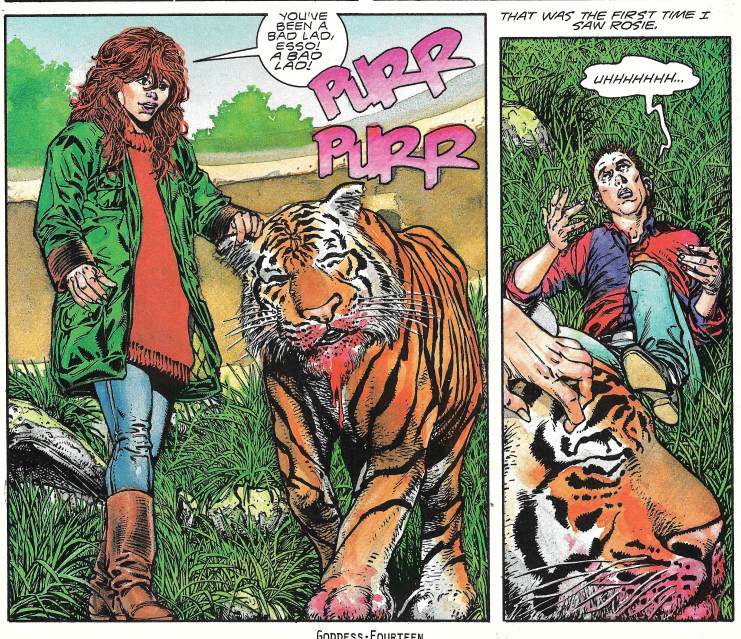 Which leads us back around to Mudhawk attempting to make it through Heathrow Airport customs with his dignity intact, but due to a random spot check, he’s pulled out of line for a cavity search… 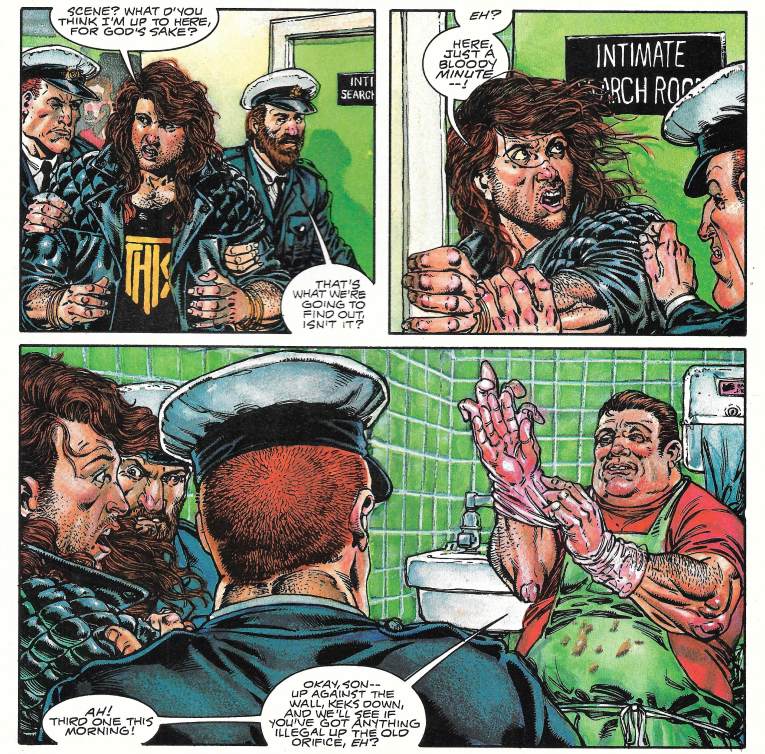 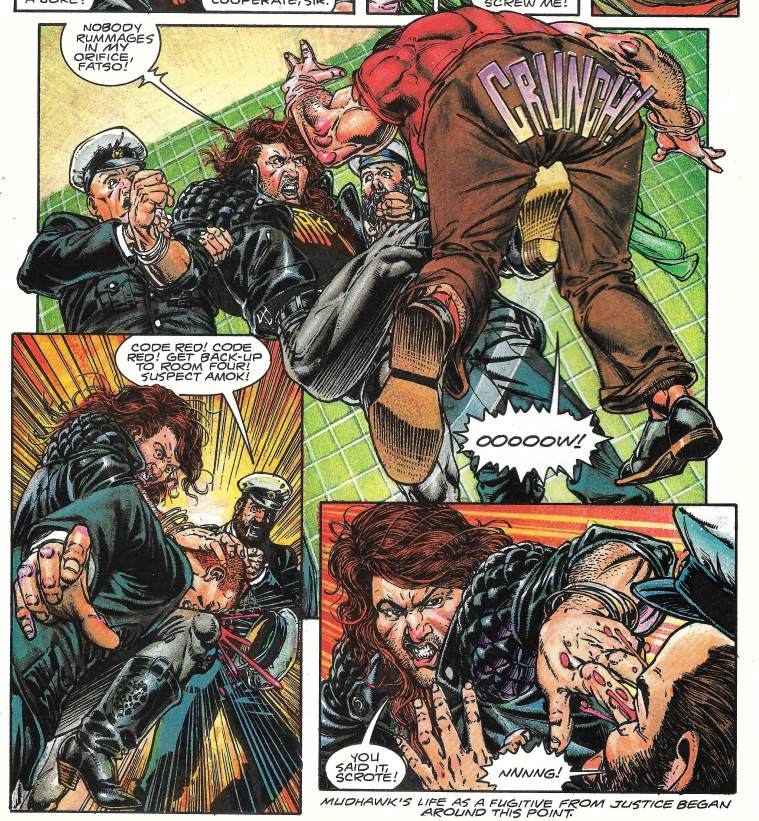 While he handles these guys pretty easily, he by no means is in the clear. As soon as he steps outside, he (and everyone on the arrivals gate) are greeted with a hail of gunfire. Ennis really likes to paint his action scenes with people who use unrestrained violence. 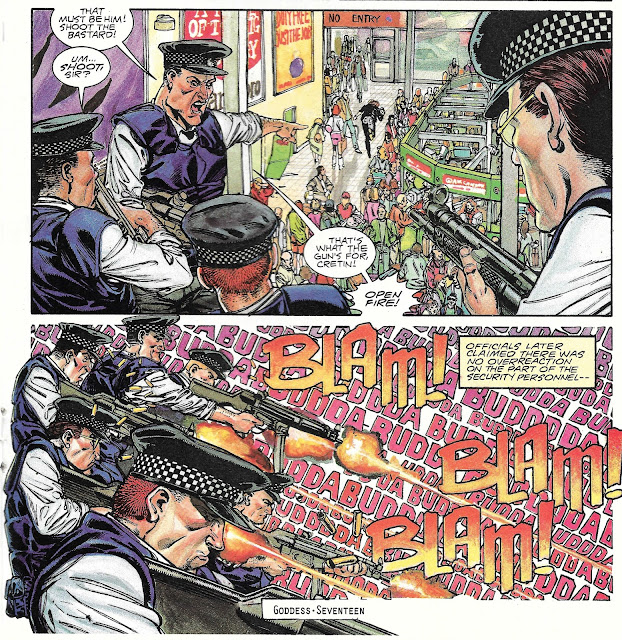 The over the top crazy violence at this point has me giving up on thinking this book has any basis in a reality I can latch on to, and so I’m just going to allow it a wide latitude and go with it. Sure it is full of gore and violence, but it is also quite a bunch of fun. 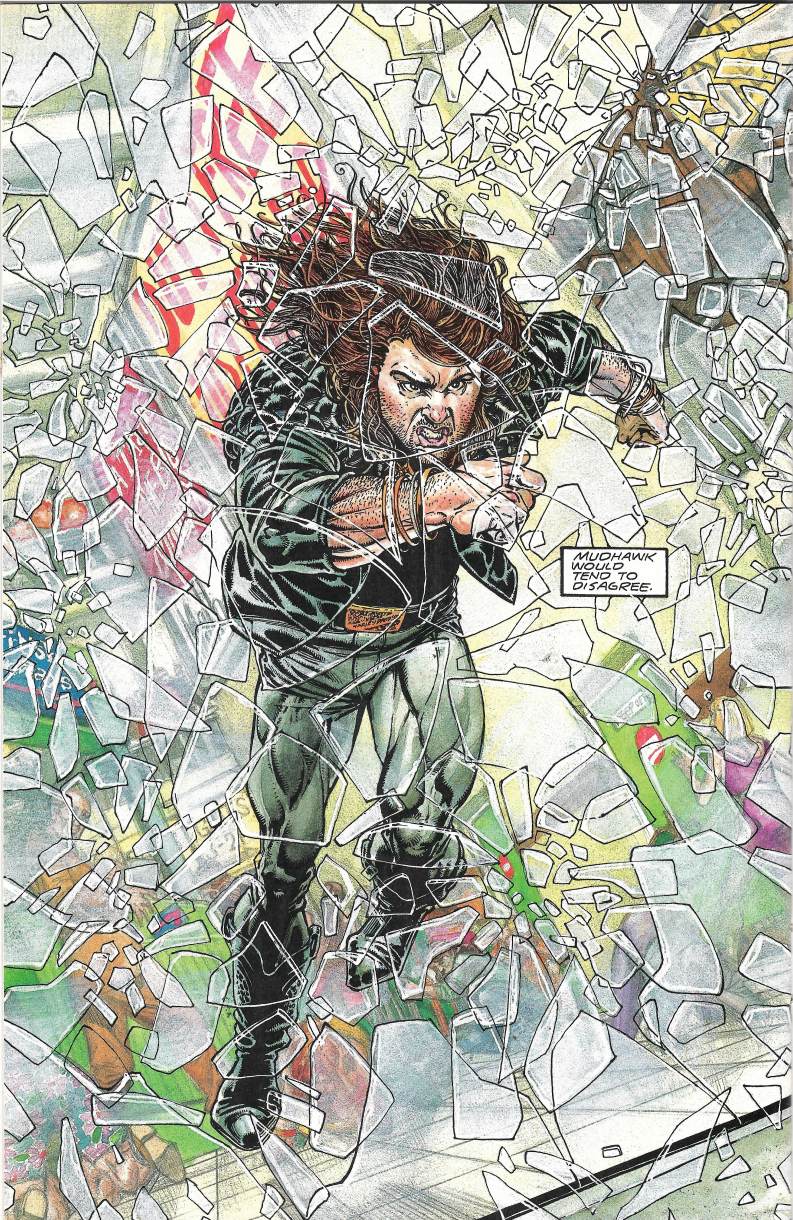 Madhawk attempts to steal a car as soon as he hits the street, and by the luck of the plot, it just happens to be that of an old girlfriend. 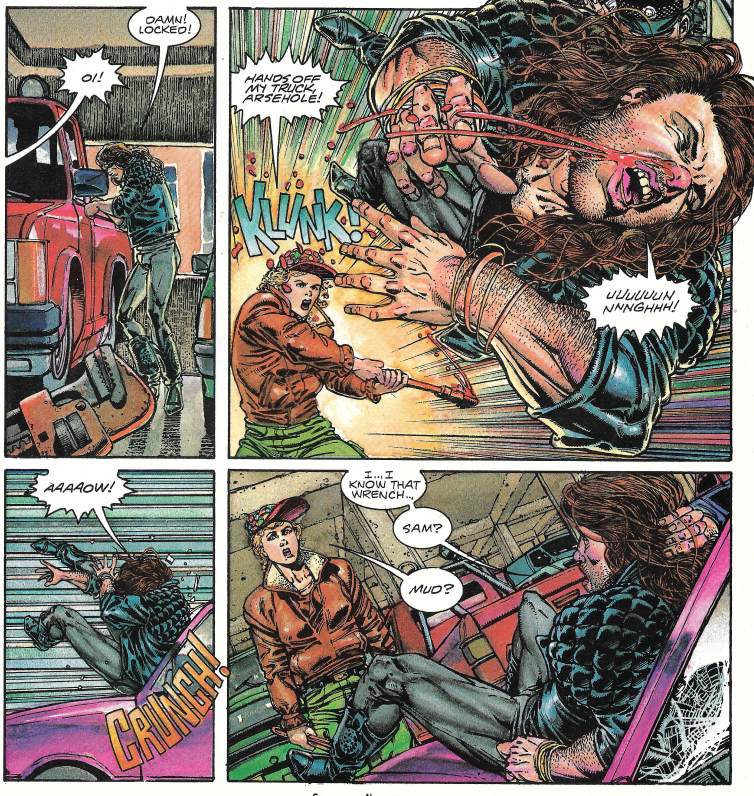 While they get reacquainted and become fugitives from justice… 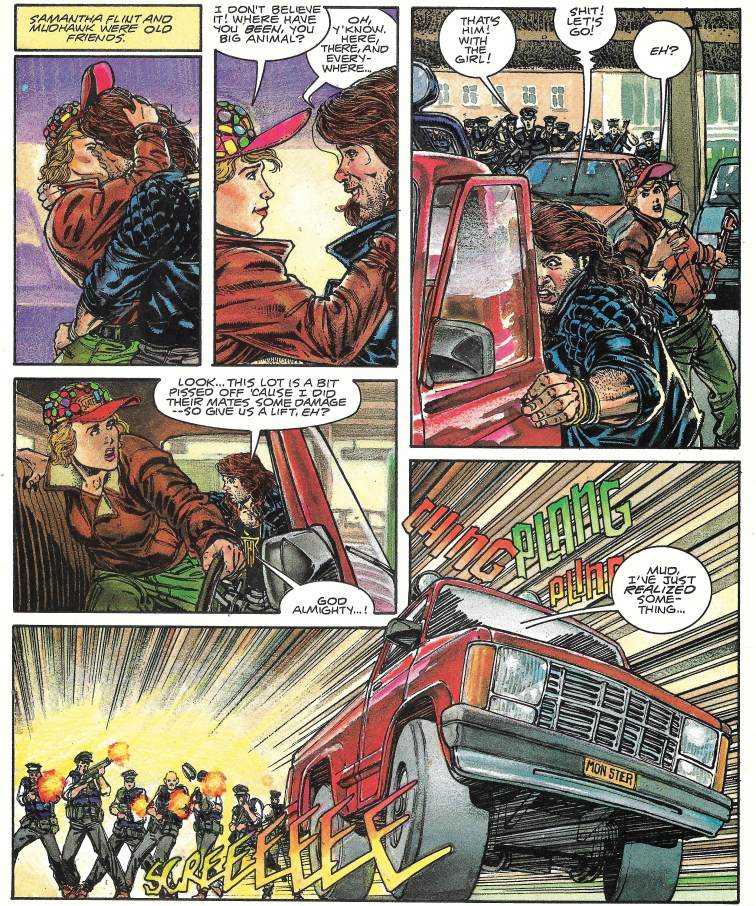 …our C.I.A. asshole arrives at London’s super-secret headquarters of X-Files things under a public toilet in a London park. He quickly makes an asshole of himself here with a joke that runs its course in a matter of two panels and then Ennis proceeds to beat to the dead carcass of for the next two pages. 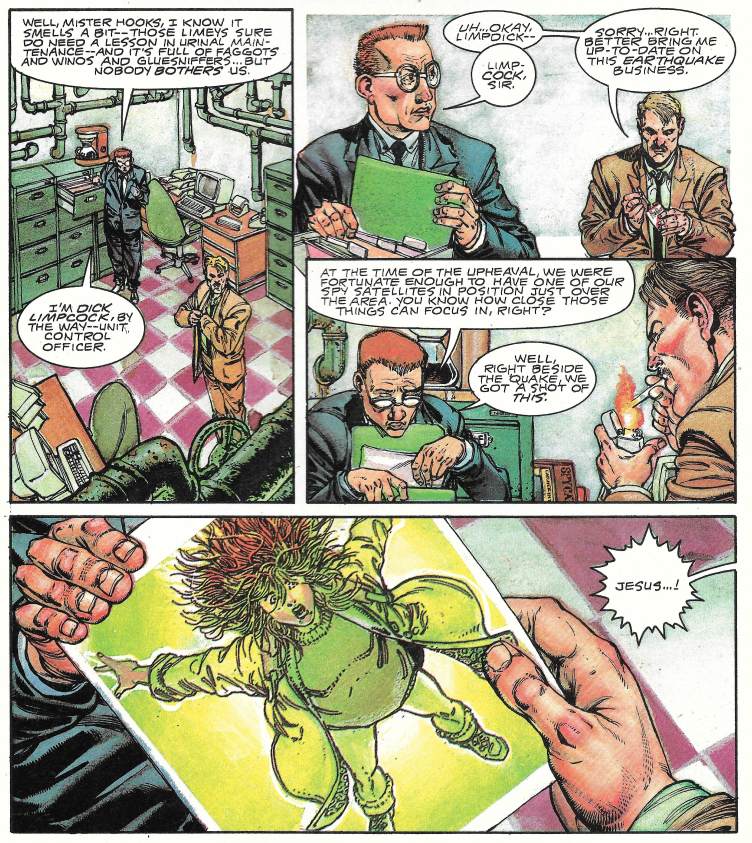 I’ll spare you more of this, as it just becomes sad and unfunny. We get to the end with both agents going to pick up Rosie.

Meanwhile, Sam and Mud are making their way to Rosie’s. Mud is thoroughly apologizing for running out on Sam because he was being sought after by the police…and also for her having to dump her truck…and for them having to steal a Chinese delivery van…and that Rosie is just a good friend. None of which I think Sam is buying. 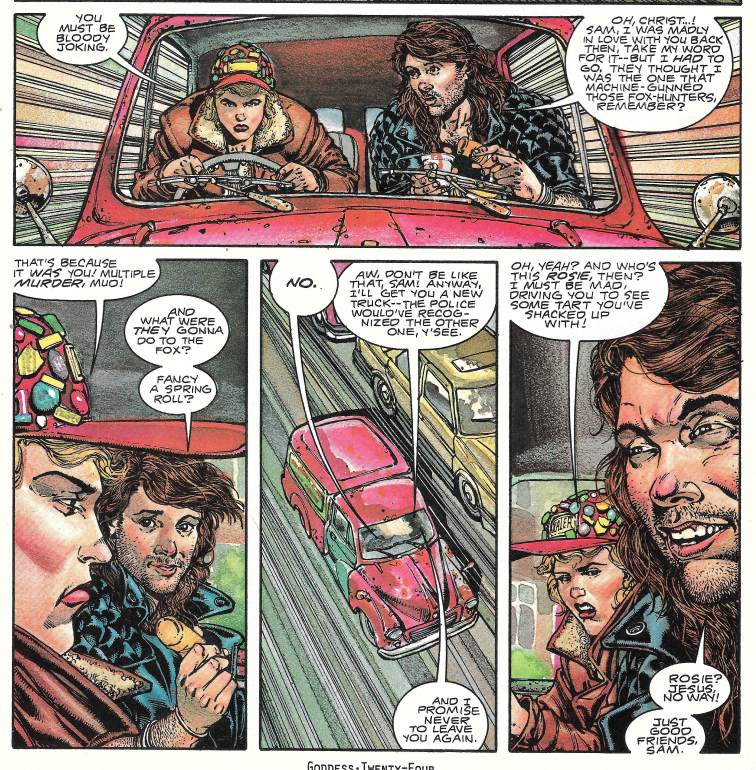 And while they wait outside for her, our narrator goes to say thanks to Rosie for saving his life… 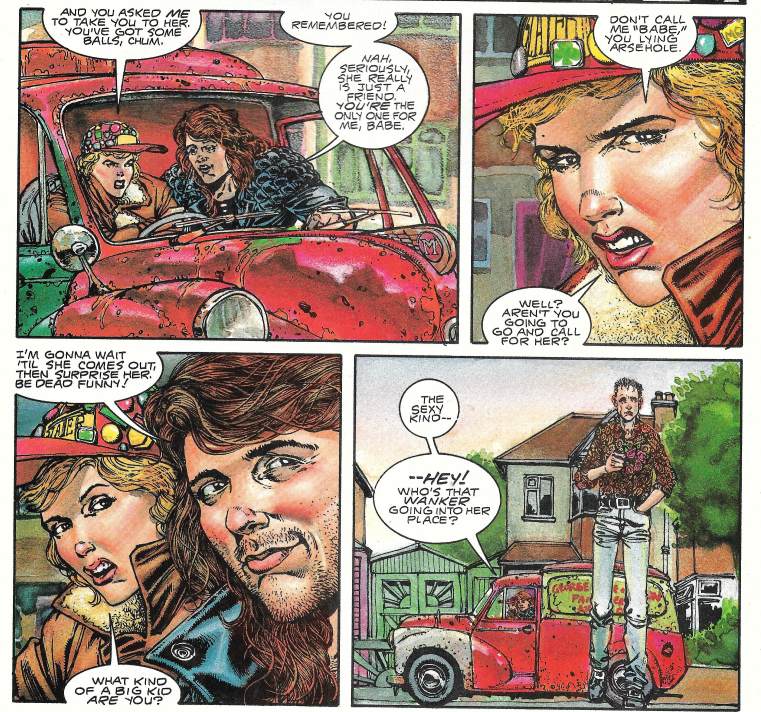 Which makes exactly the kind of event the cops are looking for to “Kidnap the Girl,” the unflattering name they use for the operation. 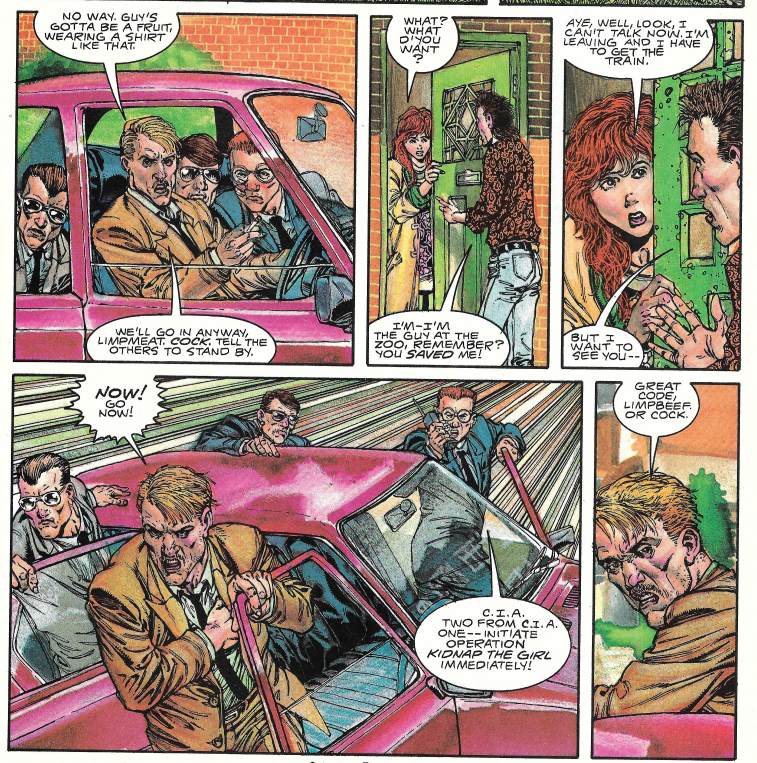 The agents grab Rosie and rough up our narrator while Mud and Sam watch. By the way: if you think a girl has goddess-like powers that would allow her to split a country in half with her mind… 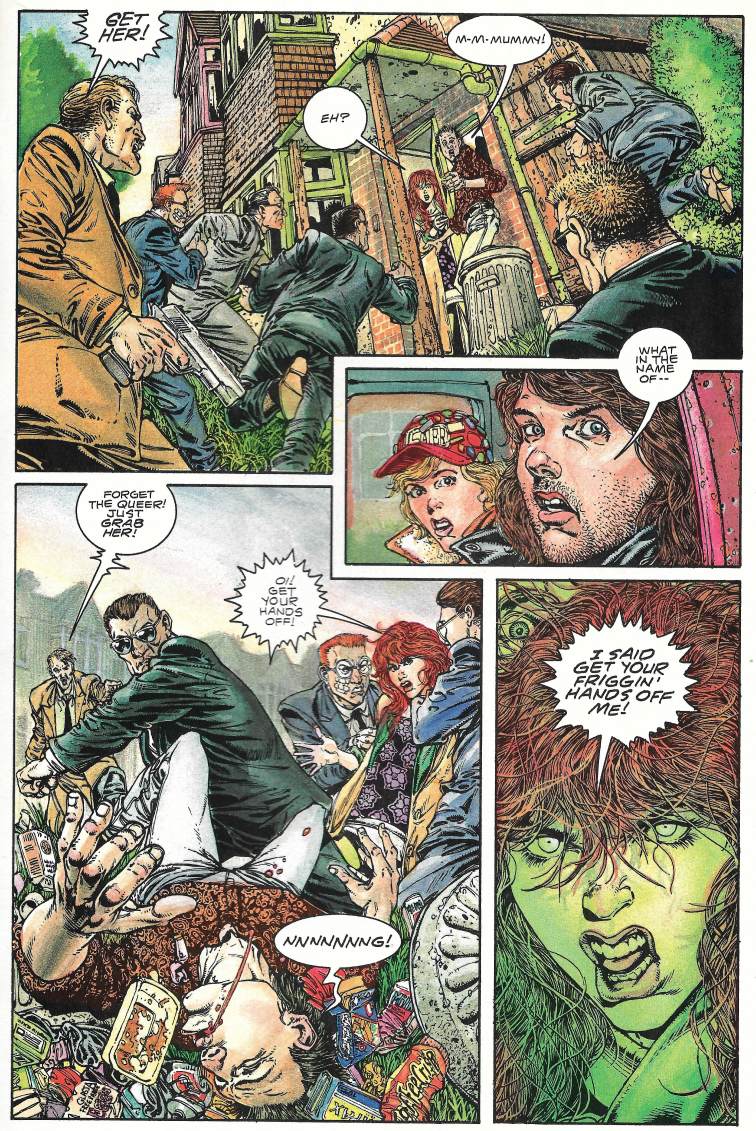 …LEAVE HER THE F*CK ALONE! (word to the wise or those that want to keep their heads intact) 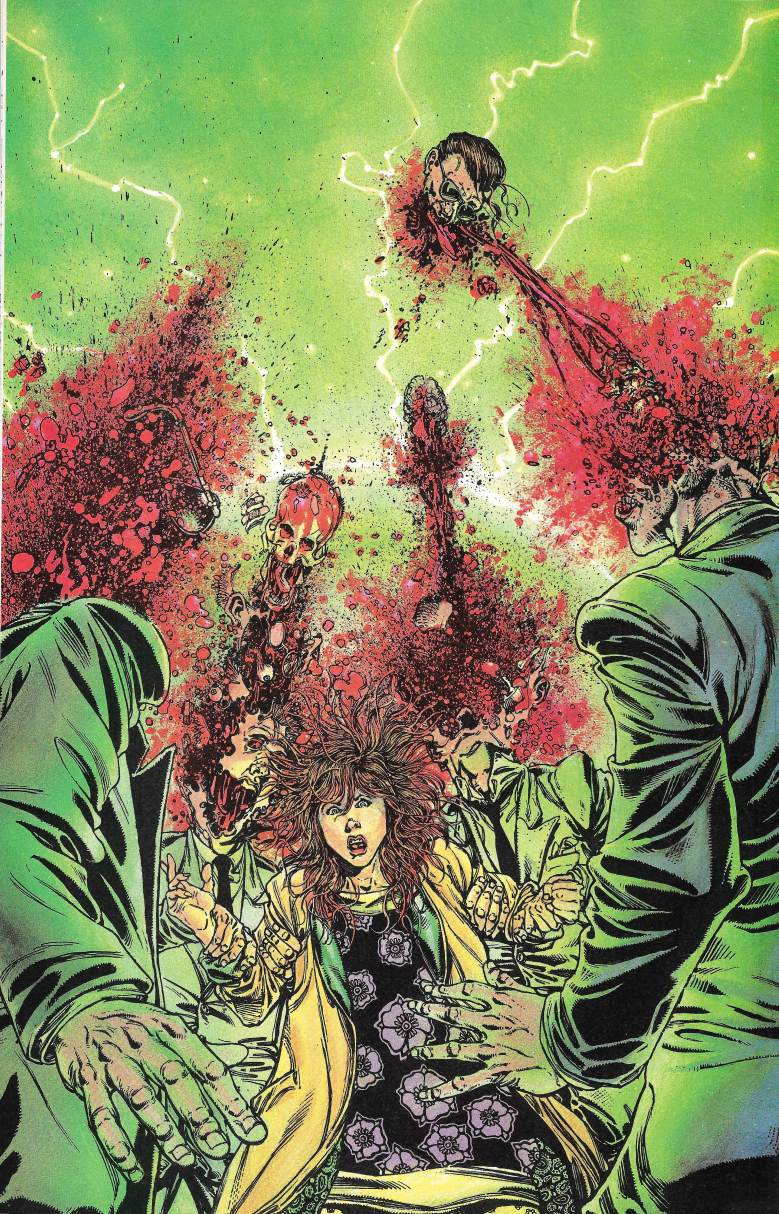 And that’s where we end, which is quite a good cliffhanger. 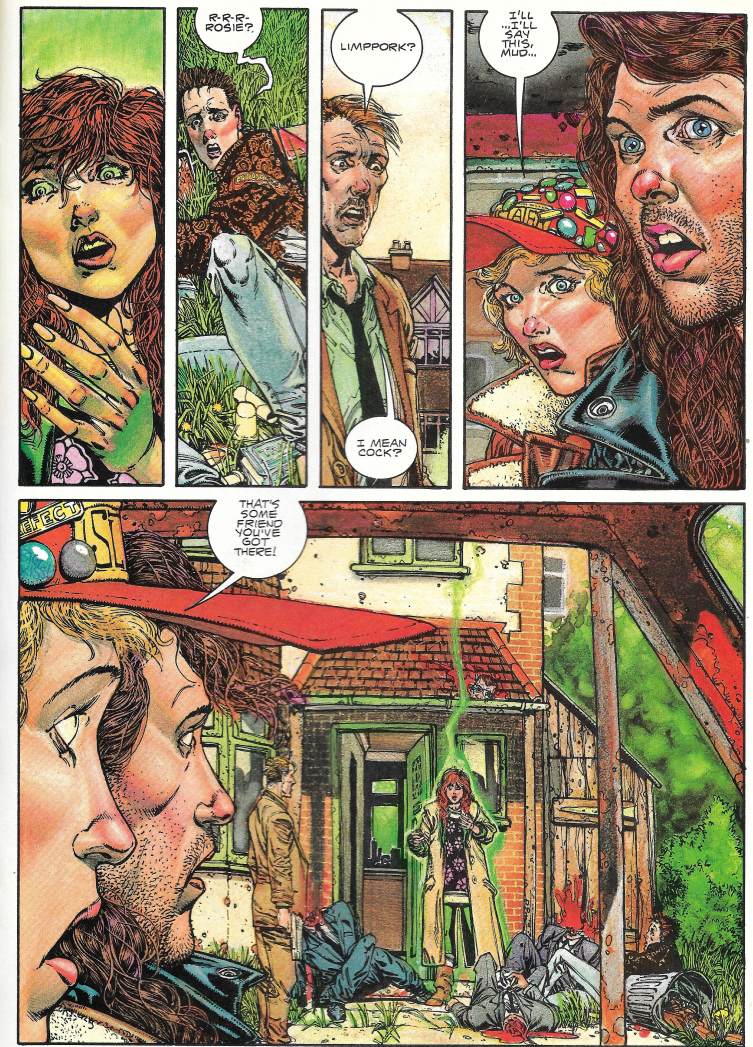 Ennis’s series went on for another seven issues and I will assume that all of them were this same level of Ennis-y goodness. Which, if that is your cuppa’, you will find yourself well satisfied.
Posted by SonOfCthulhu at 3:14 AM