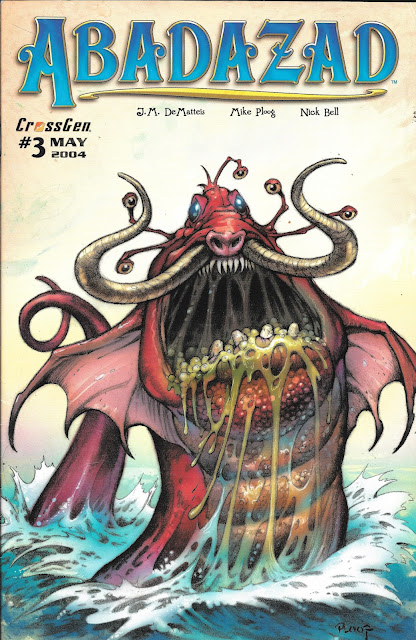 In 2003, the startup had barely turned five years old and suddenly it was having cash flow problems. The issue may have started with the two largest nationwide bookseller chains Borders and Barnes & Noble discontinued offering many CrossGen trade paperbacks. The unsold books were returned for credit / refund, wiping out cash stores. Soon the company found itself in a scandal over freelancer payments. Fans, upon hearing this news, stopped buying many of CrossGen’s titles and several of its popular creative staff, such as Gin Villa, Brandon Peterson, and Ron Marz, began to abandon the company.

All this and the value of Perot Systems stock that was backing the company’s financing took a huge hit. CrossGen’s plan had been to lose money for six years and then make it all back off movie and television deals. Now the clock started ticking.

It was the beginning of the end.

This DeMatteis/Ploog vehicle was one of the victims. Started in 2004, the series barely made it to issue number three before CrossGen shutdown, filed for bankruptcy and its assets purchased by Disney Publishing. It was also one of the few to survive this shutdown, after a fashion.

It’s almost a shame to have discovered this in the discount bins, like coming across the bones of a small child. You can see that the title might have developed a decent enough following and earned some awards had it continued on. Certainly the writing, style of storytelling, and art deserved nomination. It also had its own sort of charm that walked a line of being a children’s fantasy book and yet being a commentary on what such books derive from in the mind of their real-world author. I enjoyed this peek at Abadazad, and it greatly saddens me to hear of the comic’s untimely demise.

Yet while I mourn it, I can at least eulogize over this carcass that I have found and expose its past glories for all to exult in…

Our story so far is this: Kate and her younger brother Matt enjoyed the Abadazad series of books as kids. When Kate was nine, she took five-year-old Matt to a street fair, where the boy appeared to vanish into thin air. It’s now five years later and all hope of Matt returning is gone… or it was until Kate found a magic glowing blue portal to the very real world of Abadazad, a place where even now Matt might be held prisoner. Her journey through the realm has barely begun, as she is assaulted by the characters known as the Rocket Heads.

As Kate seeks shelter, we turn to what has become of Matt all these years, held in a blissful slumber in the clutches of the Lanky Man…

We open on page from The Edges of Abadazad… 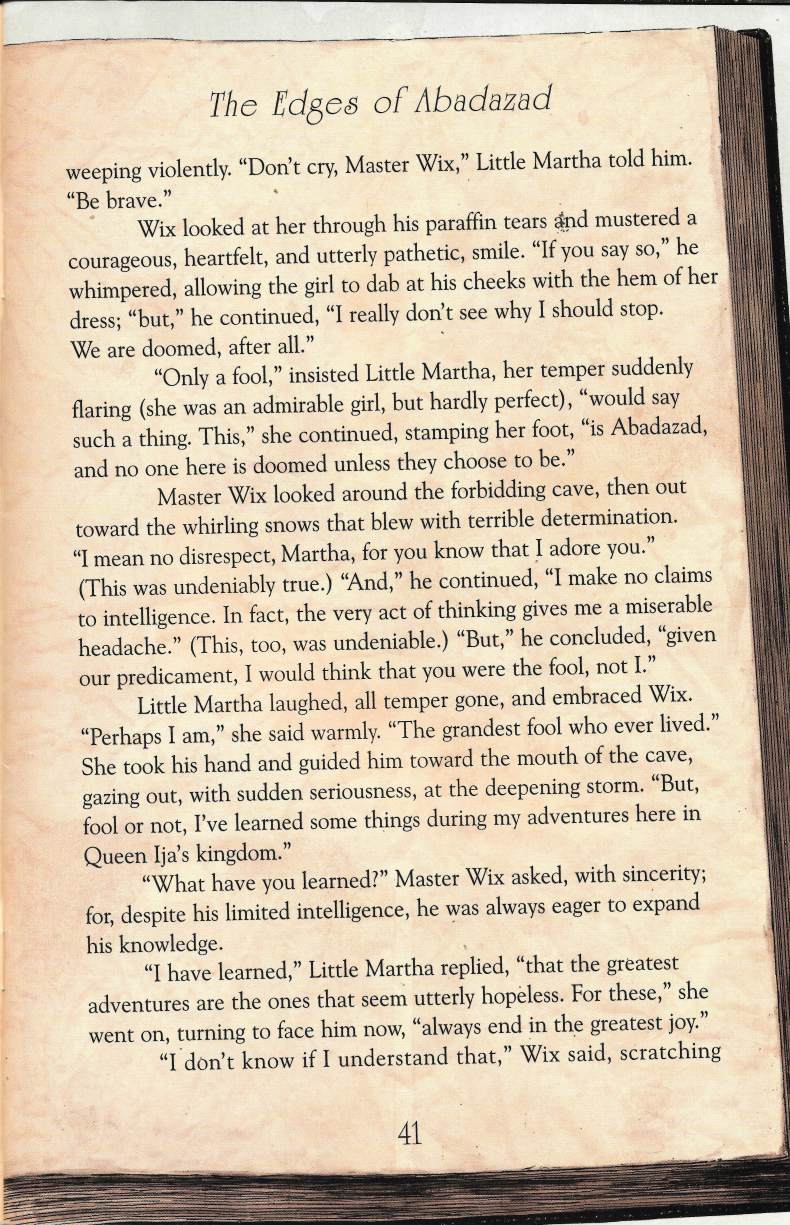 And this is part of the magic of the story: interspersed with the comic pages are these book pages from various volumes of Abadazad, forming the impression that the works were much like Frank L. Baum’s Oz Chronicles. It gives the work some real weight and flavoring that it wouldn’t have otherwise.

Then we move on to Mattie in some kind of green smokey slumber, his mind and memories of Kate reading him these stories feeding some awful machinations of the Lanky Man. 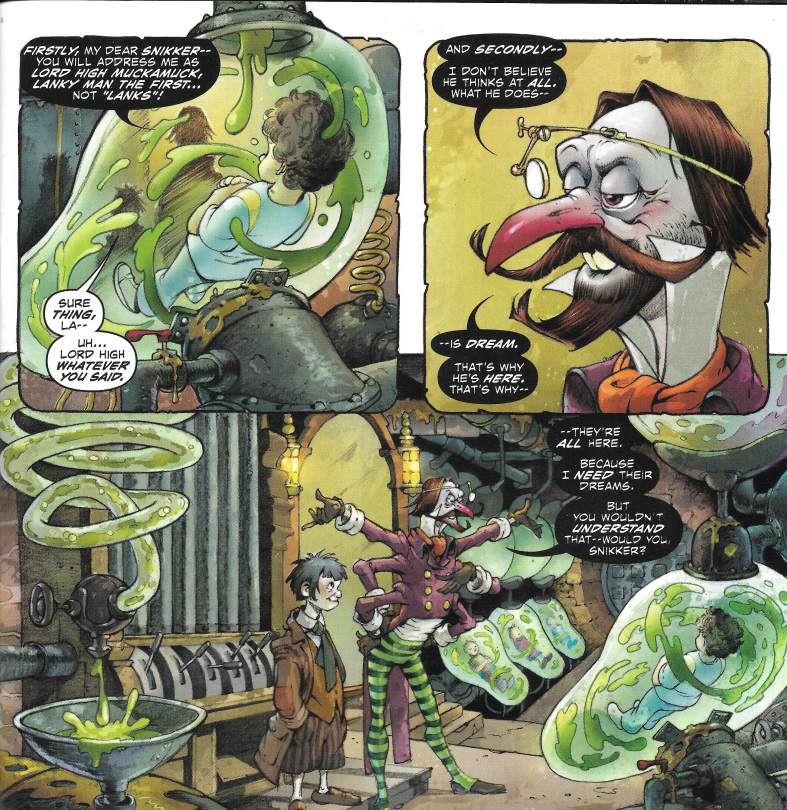 It appears Matt isn’t the only child whose dreams are being siphoned off by the Lanky man and his idiotic accomplice Snikker.

From this scene, we flip back to Lanky Mans ground troops, the Rocket Men, as the box in Kate who can only think of memories of Matt and the father they both lost long ago. 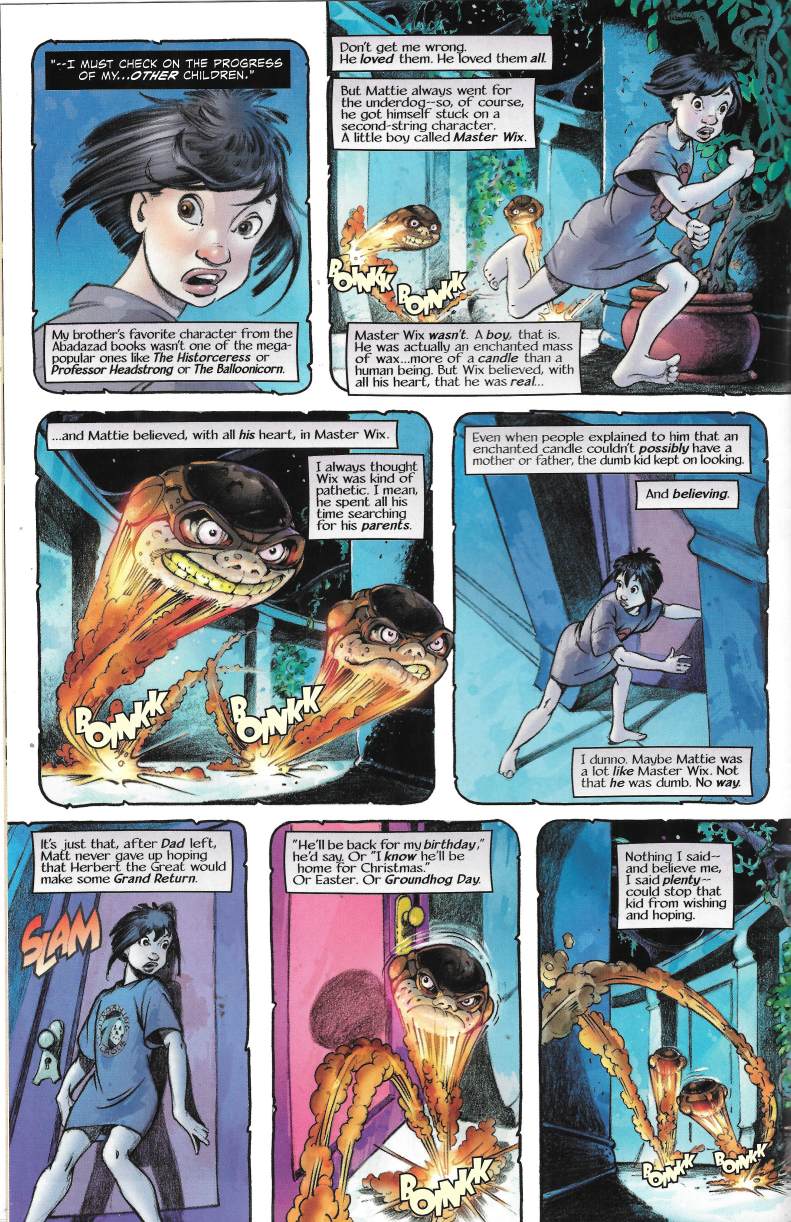 The sequence does a couple of things for me, it fills in some much-needed backstory on these characters. It prefaces the introduction of Master Wix in just a moment a bit more than the opening page of Edges of Abadazad, and it sets the tone of the art, which for me looks like Ploog is doing his best Don Bluth impression. Something in those noses, I think. Whomever it is he is aping, he is doing a good enough job that my childhood memory-bone is tickled, leading to a feeling of nostalgia.

These Rocket Heads do eventually catch up to poor Kate, but their explosion does no real damage to her other than push her around a bit. 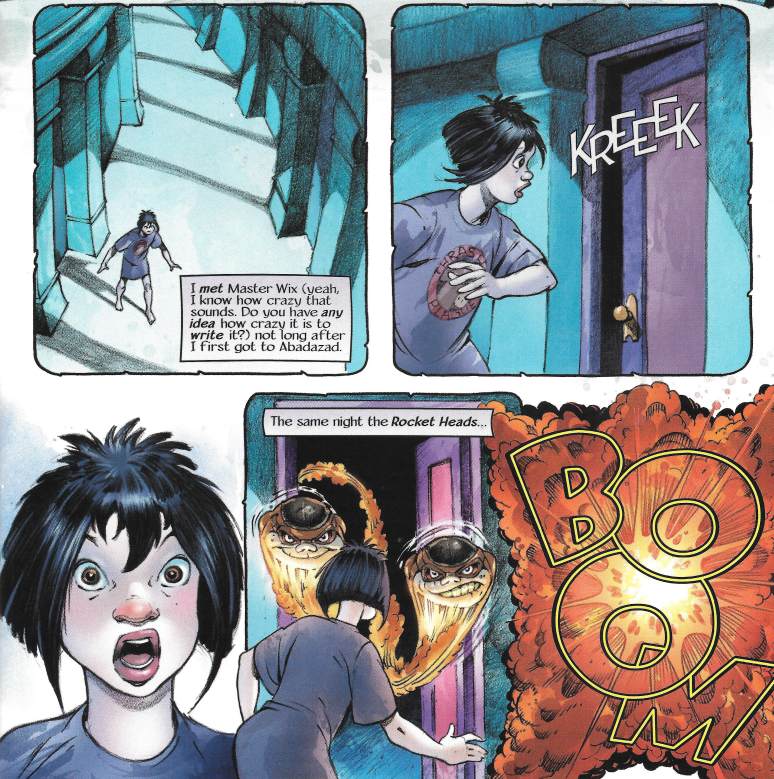 I say this even as DeMatteis is trying to use Kate’s insistence that the Rocket Heads are somehow more threatening now to legitimize them as a threat to the audience.

As Kate survives this, their attack fails miserably. 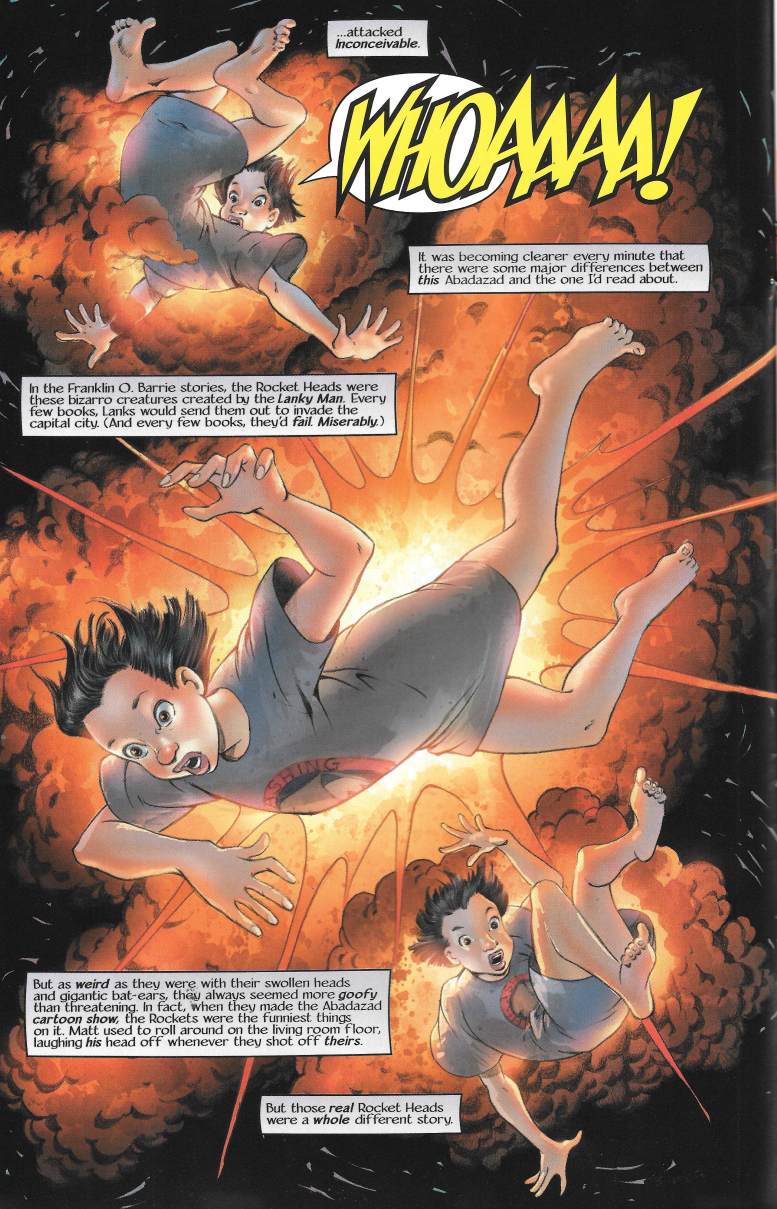 And as she does so, she wonders why the Lanky Man didn’t grab her too. As a long-time spectator of these kinds of stories, I’d gamble that it was because Mattie’s believe that the characters were real that made him desirable, a trait that Kate lacked as the older sibling. 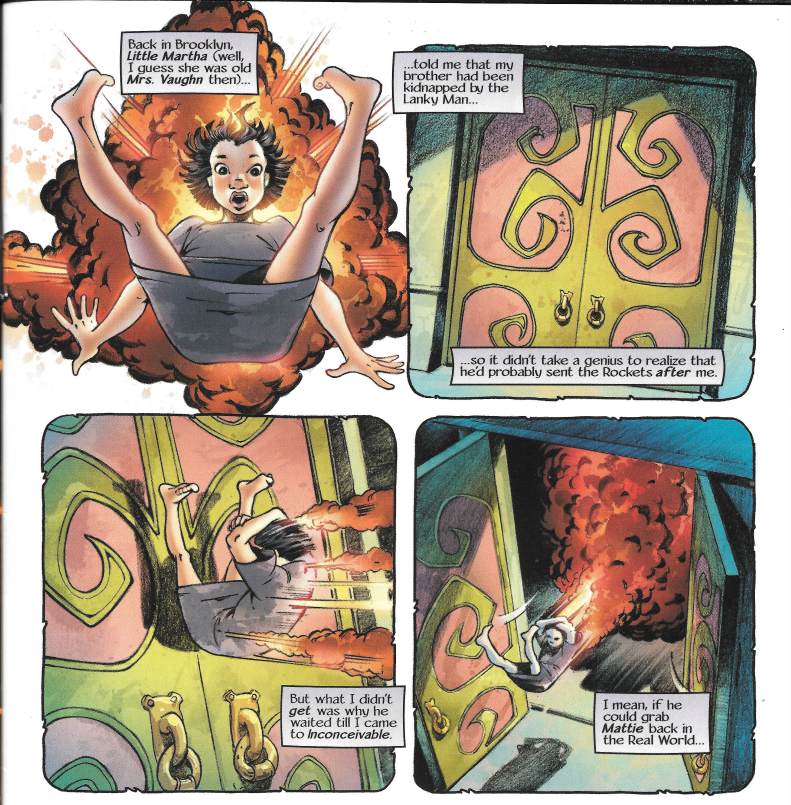 It is here, where Kate lands, that she finds her chaperon for what I think would have been the rest of the series. 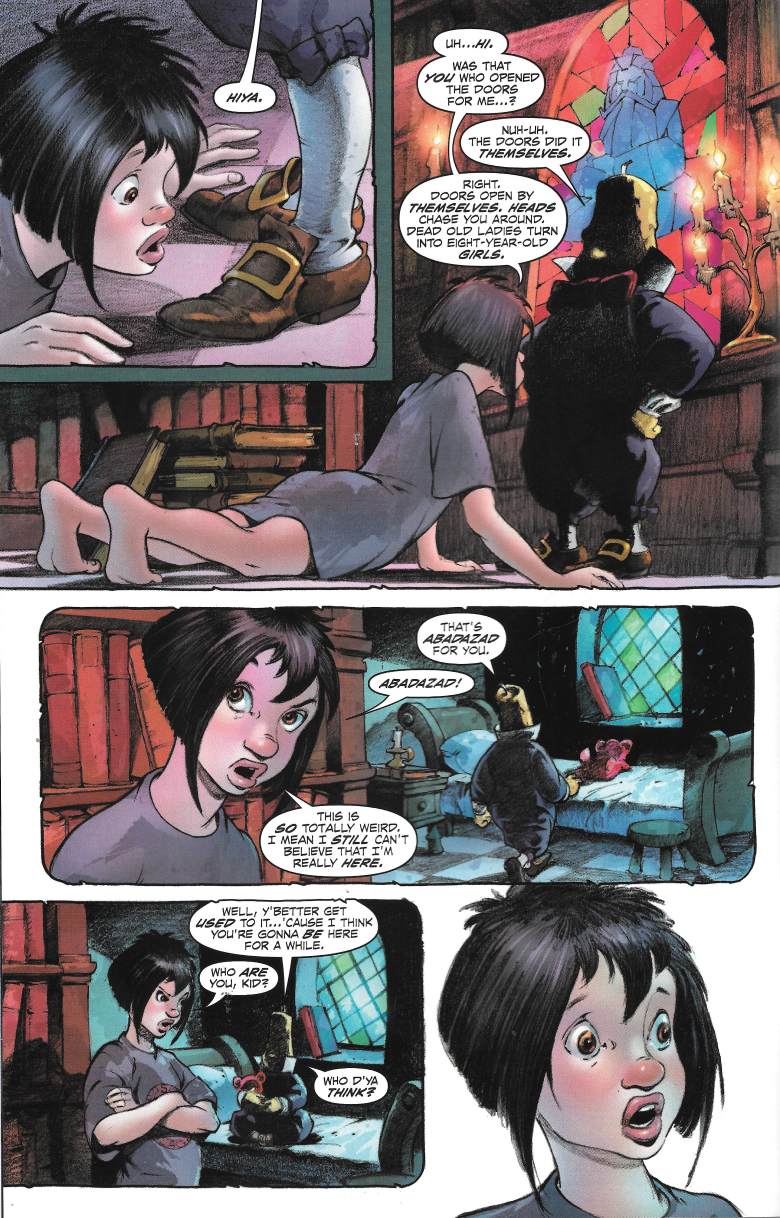 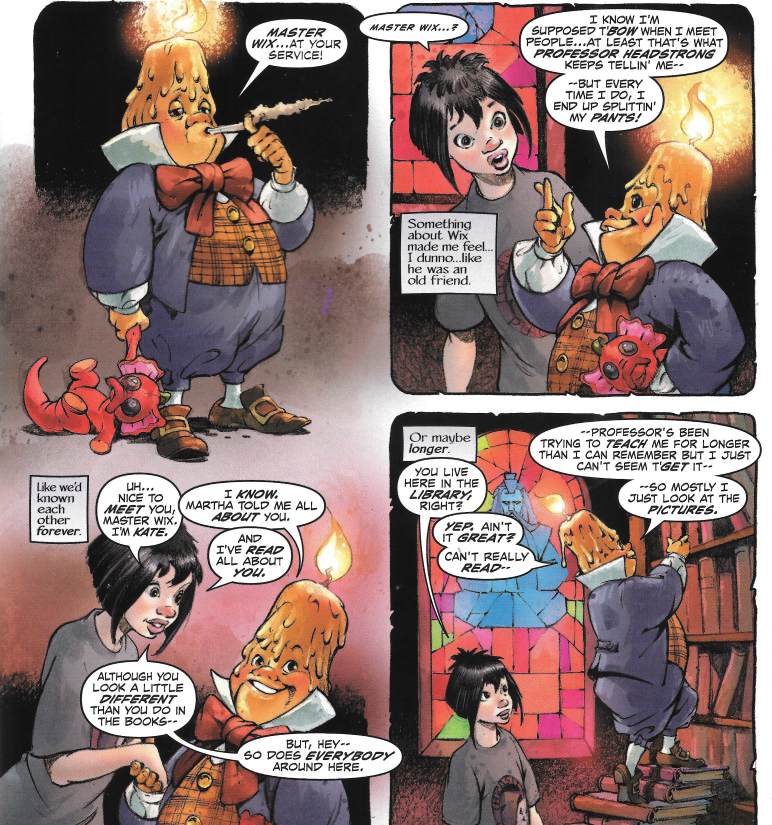 Note that Kate says Wix looks different than he does in the books, a clue that much of Abadazad is being created through the filter of the young minds that the Lanky Man has taken captive. Minds that may accentuate certain details over others leading to a very different version than is contained between the covers. While all this “mystery” is easy to figure out, the setting is well done and I appreciate the nods to Oz and other fantasy-land tropes that DeMatteis trots out.

The Rocket Heads arrive and blow both of the out the side window, with Wix going over the balcony. In hauling Wix up, Kate realizes how much like Matt this candlehead seems… 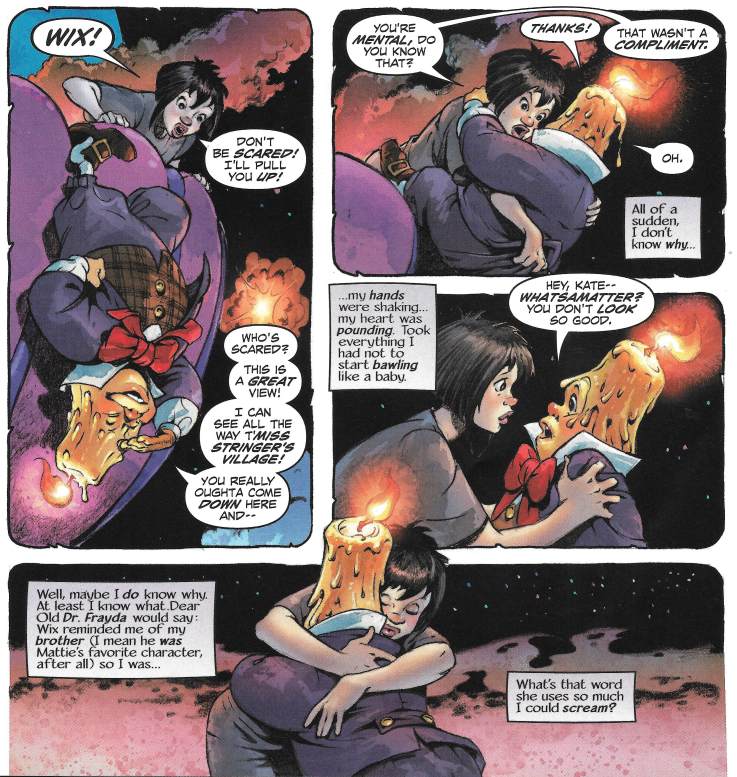 …and while the two of them bond, the Rocket Heads begin an aerial assault… 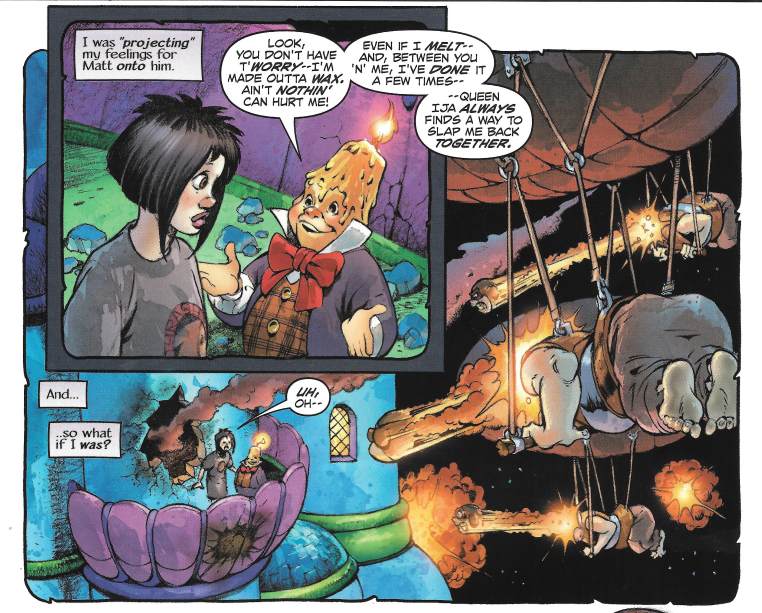 …only to turn and run at the sight of Abadazad’s version of Glenda, the good witch of the North showing up. 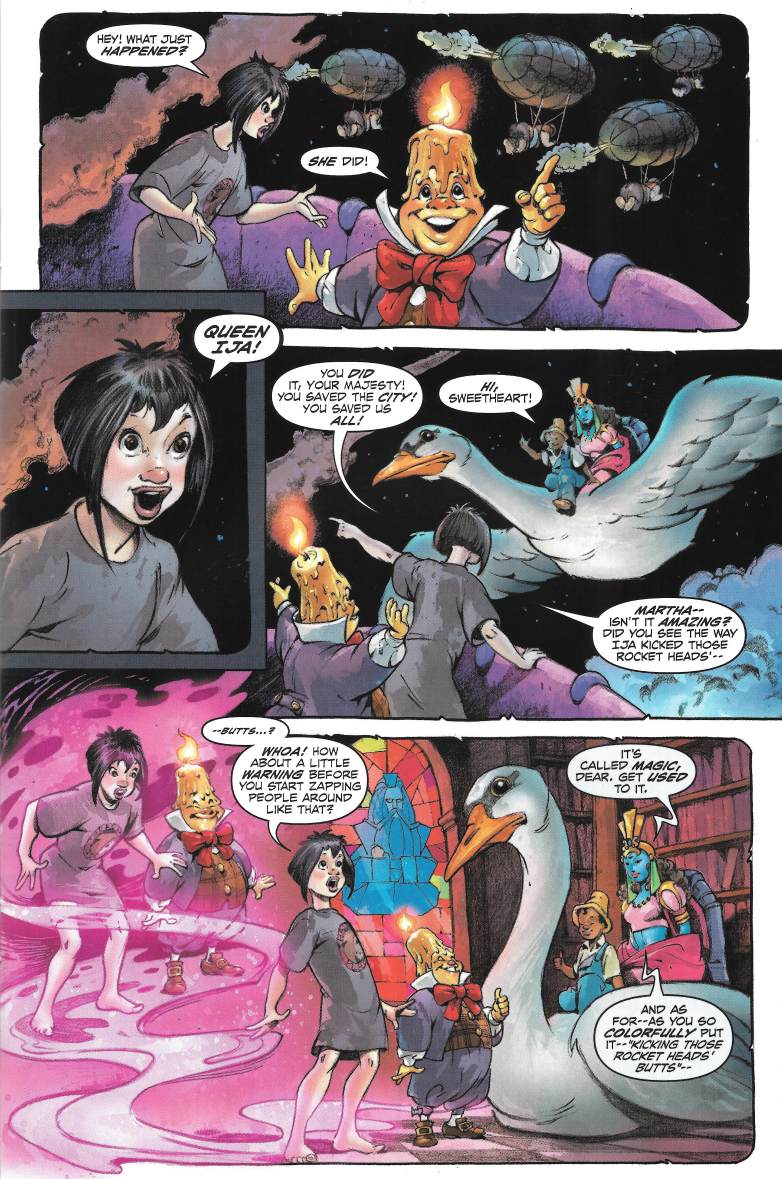 Ija explains that what turned the Rocket heads away was not her, but a belief that certain parts of Abadazad can’t be destroyed. 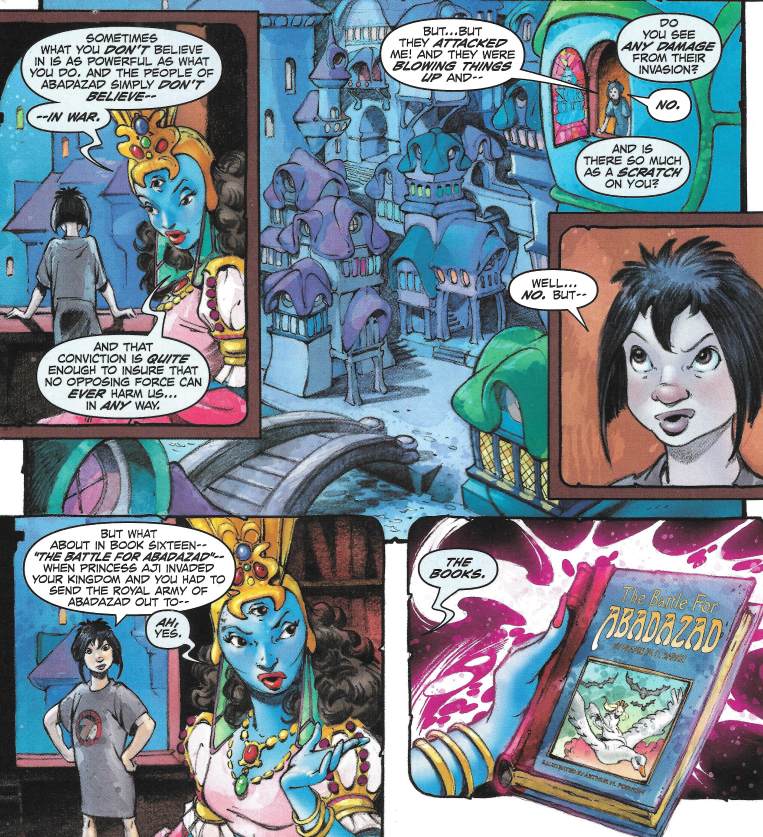 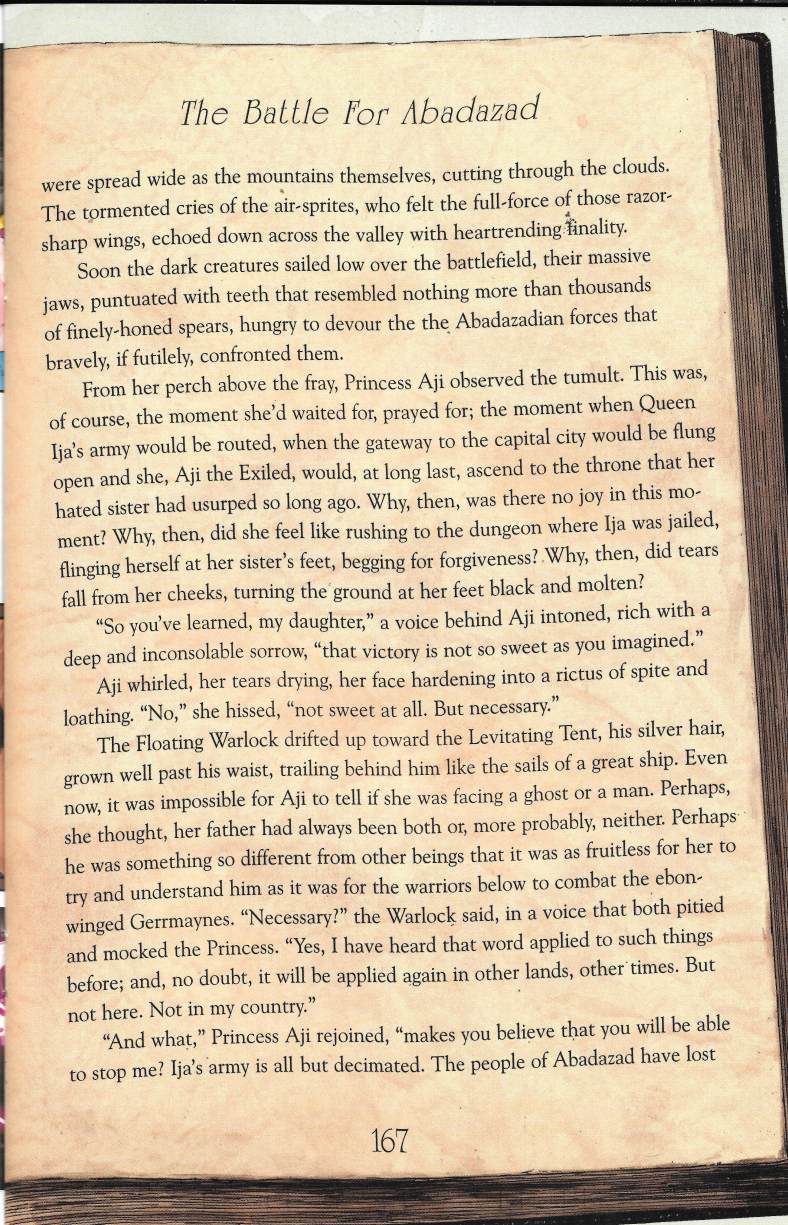 …and we get another page-long excerpt… 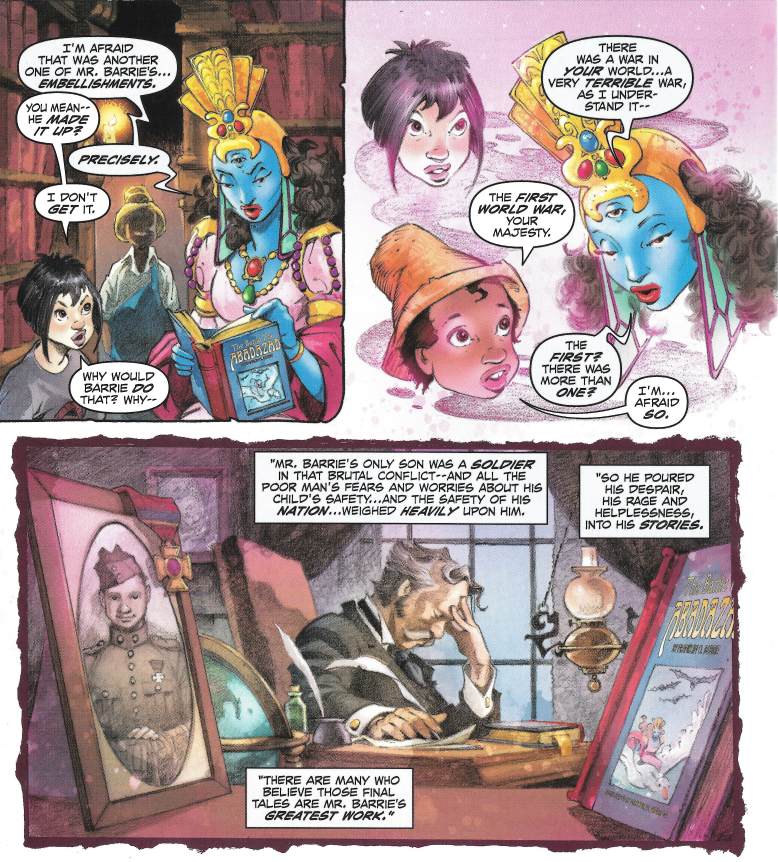 …which is too good not to include, but even broaching this topic leads us right around to the Baum of this world and how their struggles in the real world sets the tone for the fictional worlds they create. It is a neat little bit of metafictional philosophy there.

All this leaves both young ladies in tears. Kate asks Queen Ija for help, and while the monarch is willing, she cannot commit until later. Kate requires action right now and tells her so… 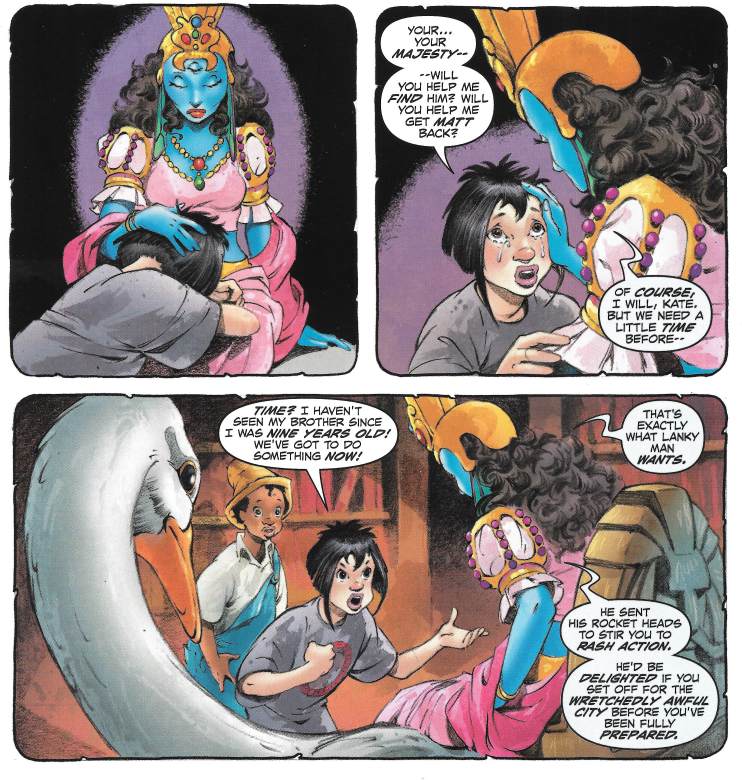 This causes Kate to storm off to take on the Lanky Man and his Awful City alone, but she is soon joined by Mister Wix. 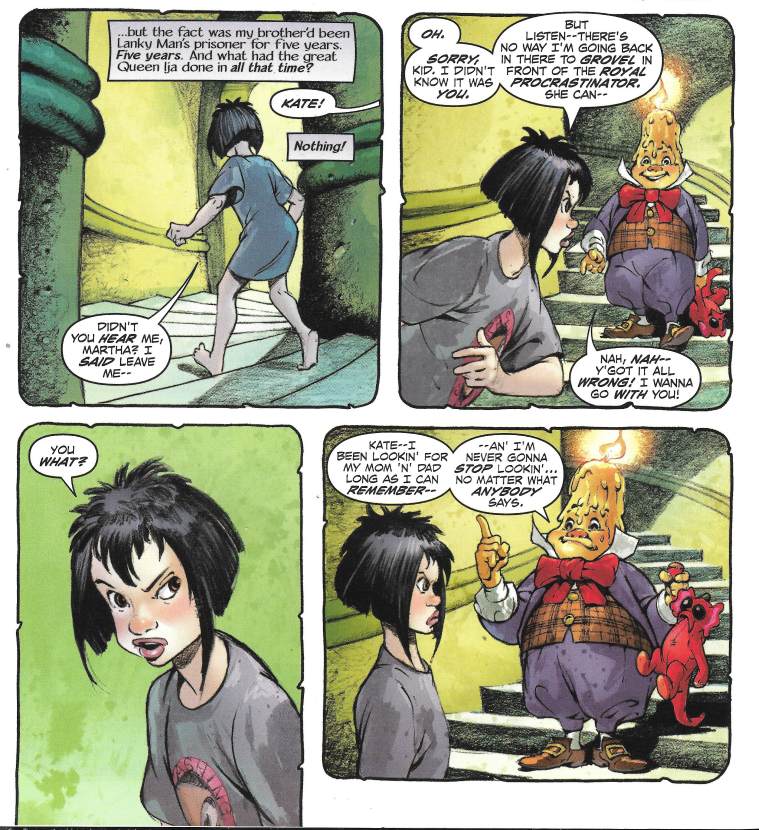 Making use of secret passageway out of the castle, the pair set off… 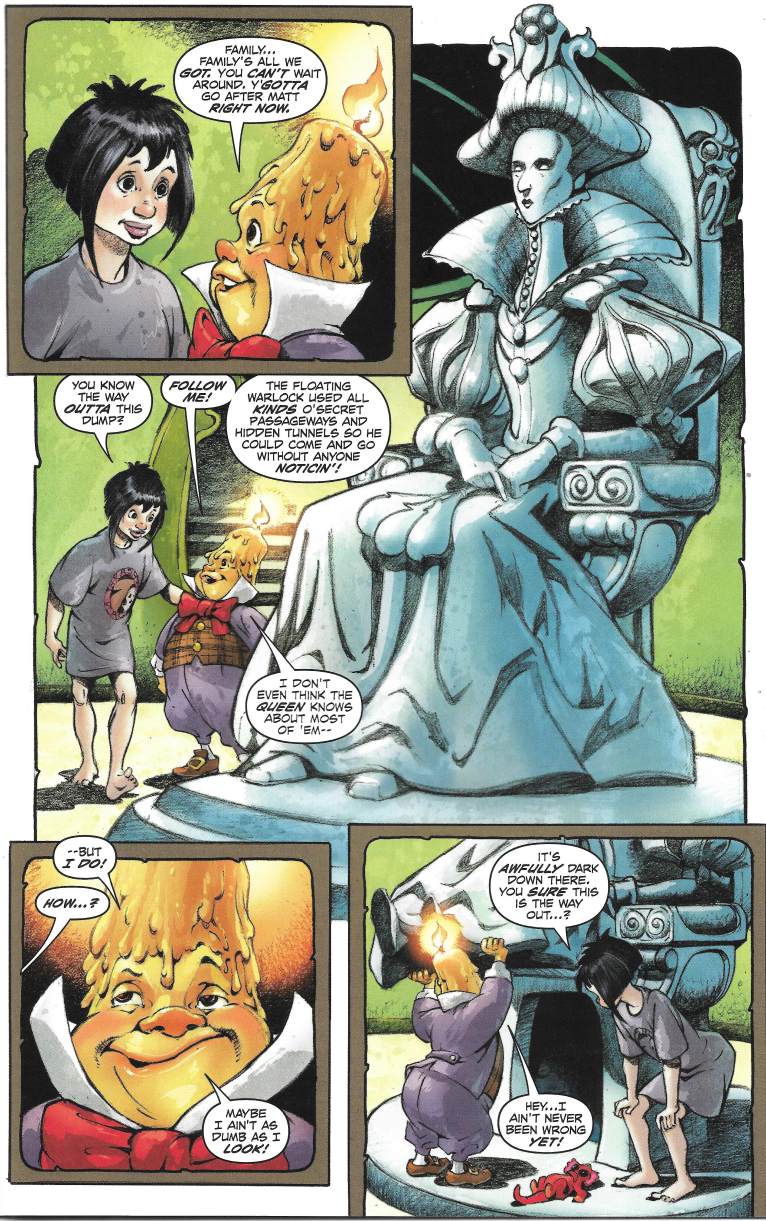 …and due to Mister Wix being a complete and utter fool, the land in a weird sewer under the castle. 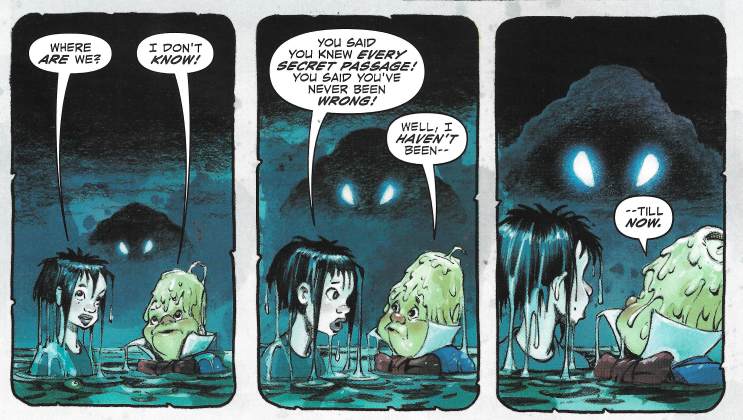 Where the pair are menaced by the creature from the cover… 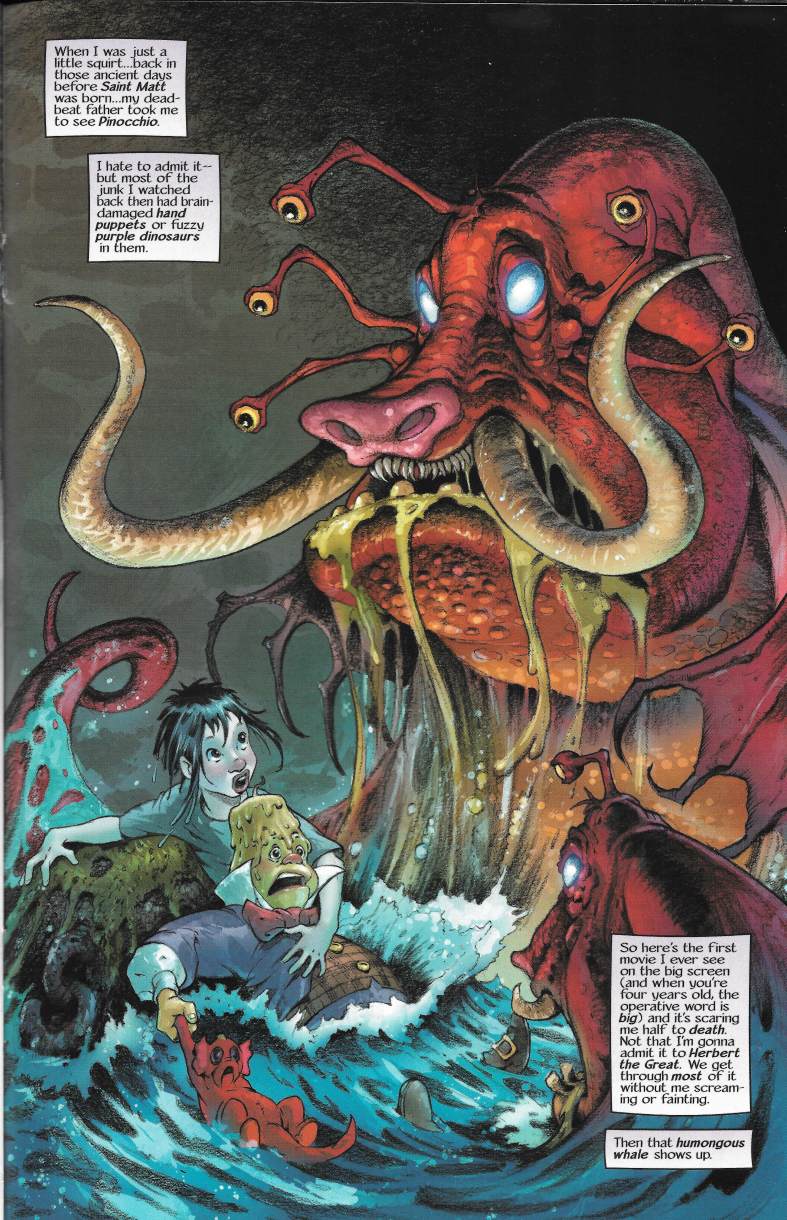 …and then promptly swallowed whole, as Mattie wakes from dreaming this nightmare. The End. 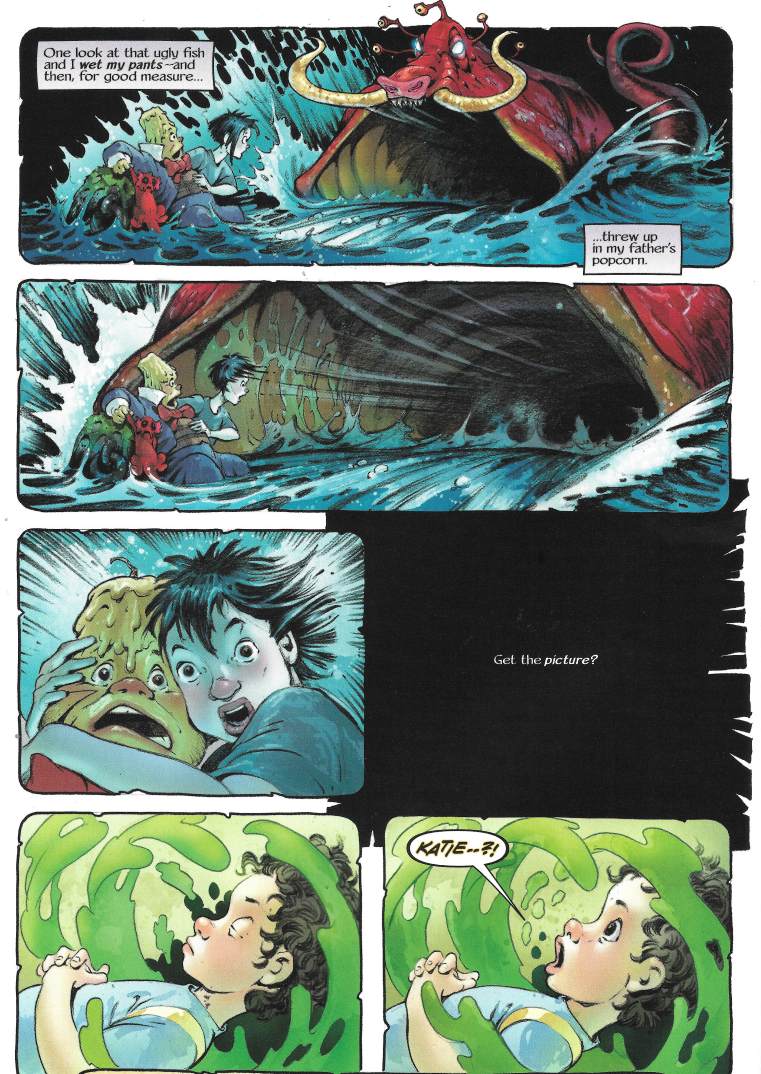 This of course was not meant to be the end, but this is where to book stopped. It would almost be darkly comedic that Kate died looking for her brother who spent an eternity in captivity dreaming of stories from his childhood.

Thankfully, Disney thought the property had more legs than that and took DeMatteis and Ploog under contract for an eight volume Abadazad book series. However, they altered the format quite a bit. These would be prose books with inset graphic novel pages in various points throughout, sort of a reverse of what we see here. Alas this series too was to have an abrupt end. The first two volumes were produced and sold internationally, the third only released in England and the fourth scheduled, but never released.

All of this makes me a bit sad. DeMatteis is a seasoned, skilled writer and you couldn’t ask for a better artist than Mike Ploog. These might have been award winners in their original format. Now we’ll never know what could have been.
Posted by SonOfCthulhu at 3:44 AM