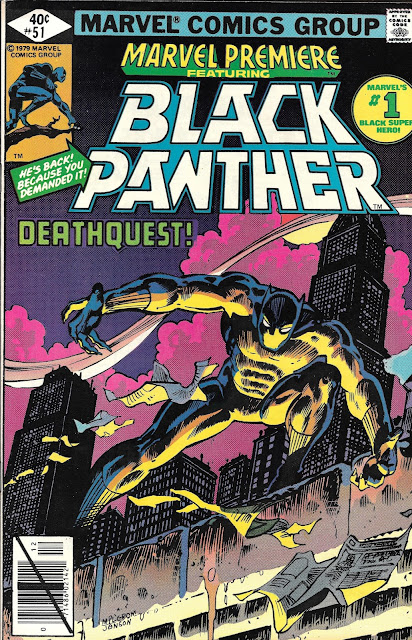 Flashbacks and a flying villain!

We’ve done the origin thing, as have the good folks over at Back to the Bins, so now we need to move forward to actual physical books that have shown up in the Crapbox. Lets see how they fair.

Charting the course of the Panther after his introduction is a rocky bumpy ride through multiple titles, including his first unsuccessful solo series. Panther hung out with the Fantastic Four for a bit after issue #53, but was sidelined for much of the time. He next showed up in Tales of Suspense when it was a split Iron Man / Captain America title in the latter’s stores for issues 97 through 99, which saw him venturing into New York City for the first time as the Panther. He joined the Avengers in issue number 52 in May of 1968 and was part of the team for a couple of years along with appearances in some Daredevil issues and Astonishing Tales where he fought Doc Doom. 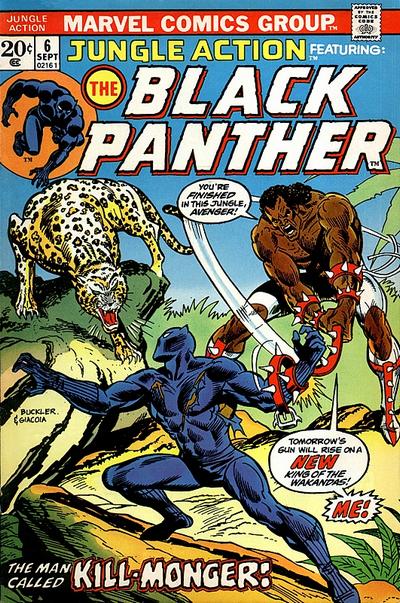 Then Panther caught a break, the lead story in Jungle Action number 5 was all him, and all of this run I see is currently trending as a hot comic. The story was just a reprint of Avengers 62, but subsequent issues featured a new multi-issue length storyline which some say was the first true graphic novel. His adventures ran through the book’s end at issue 24. “Panther’s Rage” by Don McGregor and pencillers Rich Buckler, Gil Kane and Billy Graham with inks by a young Klaus Janson and Bob McLeod was the first arc which is the Kill-Monger saga for fans of the movie. 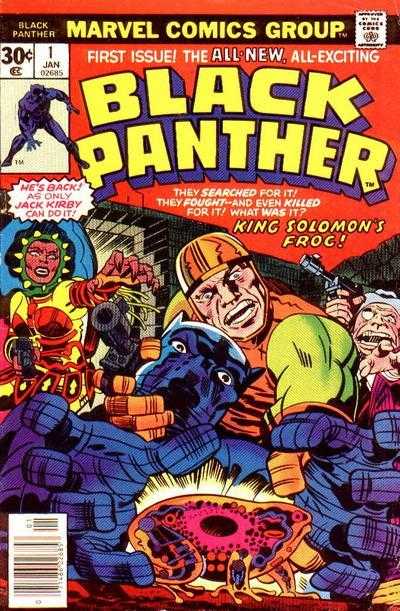 Though popular with college students, the Jungle Action’s low sales numbers ensured its cancellation, but some might have heralded this as a victory for the character. Jack Kirby had returned to Marvel after leaving DC and reconciling with Stan Lee. He was handed a new self-titled Black Panther series as one of his starting books. After twelve issues, however, Kirby wanted to move on to other projects and the book was passed on to writer Ed Hannigan and artist Jerry Bingham. The title ran for three more issues before it was cancelled. 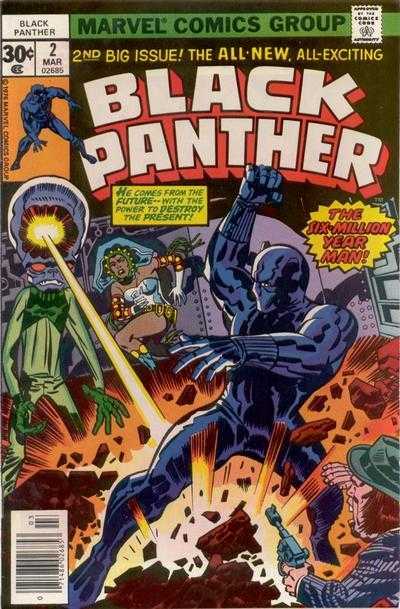 And that’s where we pick up with this issue. Hannigan and Bingham had started a new storyline right before cancellation and were allowed to complete the final three stories already written for Black Panther issues#16-18 in the pages of Marvel Premiere 51-53. This book is mostly recapping the second and final arc of Jungle Action to bring readers up to speed on where McGregor had taken the character, way less in the cosmic vein than Kirby. This storyline saw a return to the style of the more popular tales from Jungle Action.

I don’t have any of these McGregor books, but feel an urge to seek them out with all the press they’ve been given. Just a brief peek at the covers shows McGregor’s Panther fighting the Klan and trying to hold together his war torn nation from the machinations of Man-Ape.

Whereas in the Kirby books Panther fought for a magical golden frog statues and tussled with Yetis, samurais and aliens. So yeah, some parsing of this history had to occur to keep a consistent tone between the books. We’ll see how Hannigan handles that in just a bit.

For now let’s take a little peek between the pages…

We open with T’Challa arriving at the new Wakandan Embassy where some sort of upset is occurring. 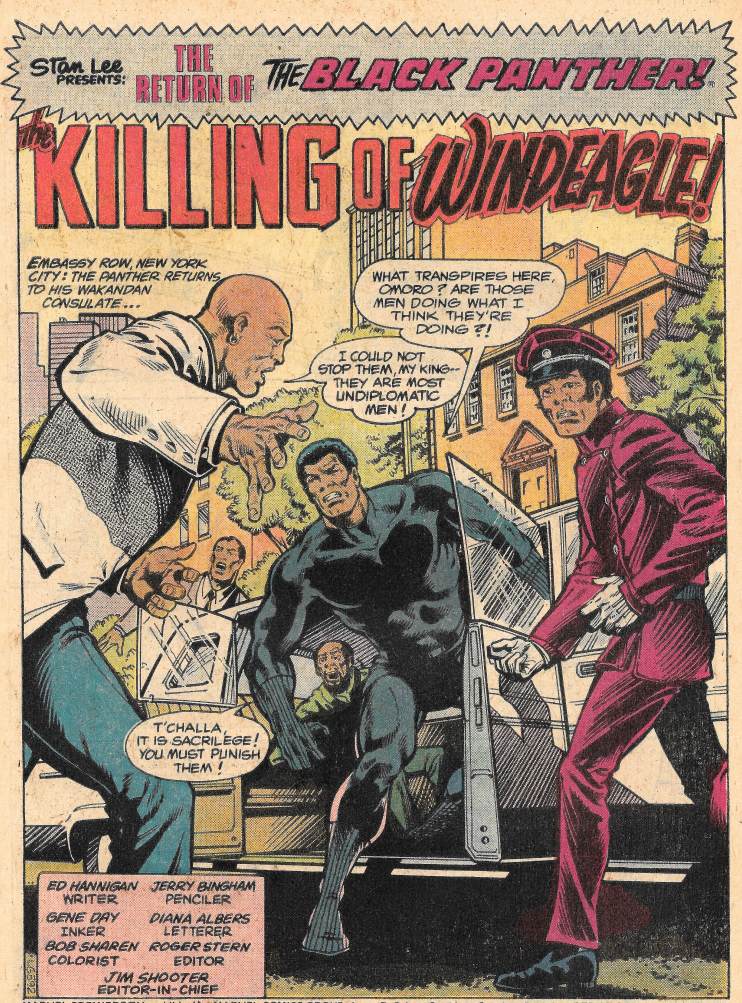 It appears the guys are not supposed to touch the Panther throne, Which is currently nearly crushing three grown movers who are trying to take it off the truck and into the embassy. T’Challa quickly signs for the delivery and sends them packing… …even though it means he’ll have to do the moving himself.

And deal with the sudden threat of Biiiiiiiiirdman! 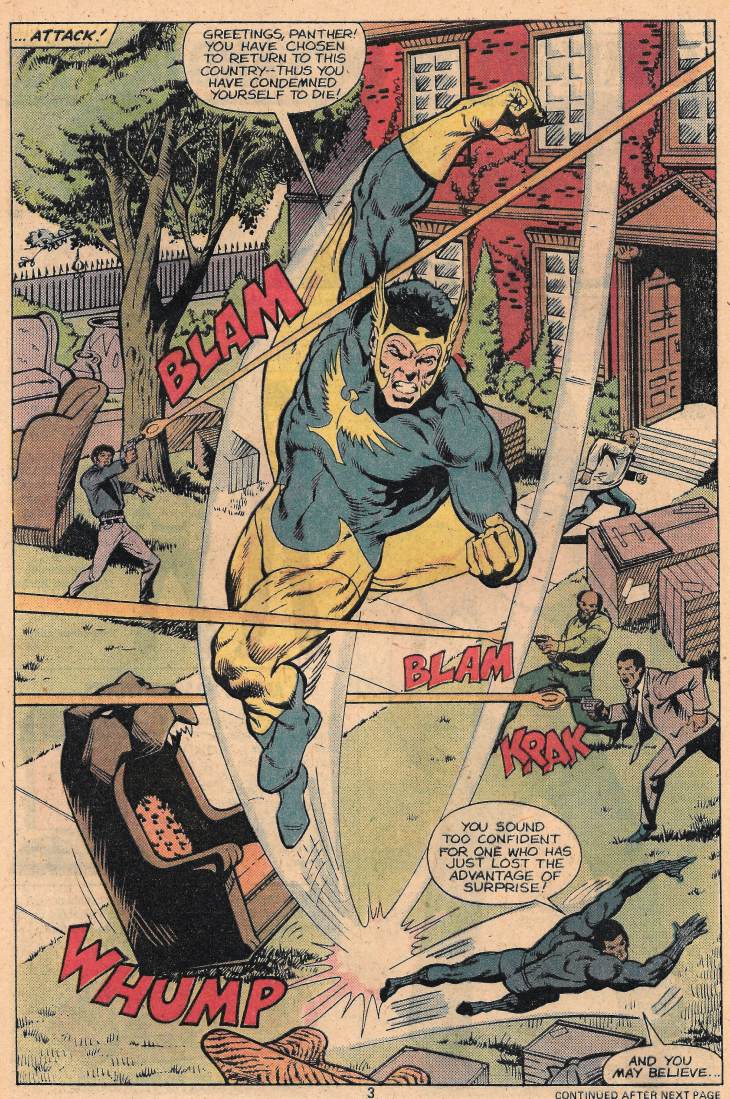 Please welcome to the stage Windeagle, who by the sound of this particular tale isn’t going to be around for very long.

He grabs the Panther by surprise, threatening to kill him… 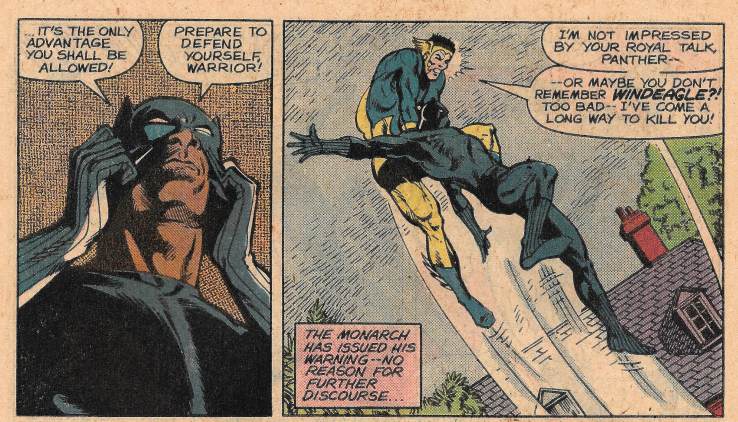 …but it is abundantly clear that he hasn’t got near the skills needed to pull anything like that off. T’Challa flings him across the front embassy lawn using Windeagle’s own body as his fulcrum. 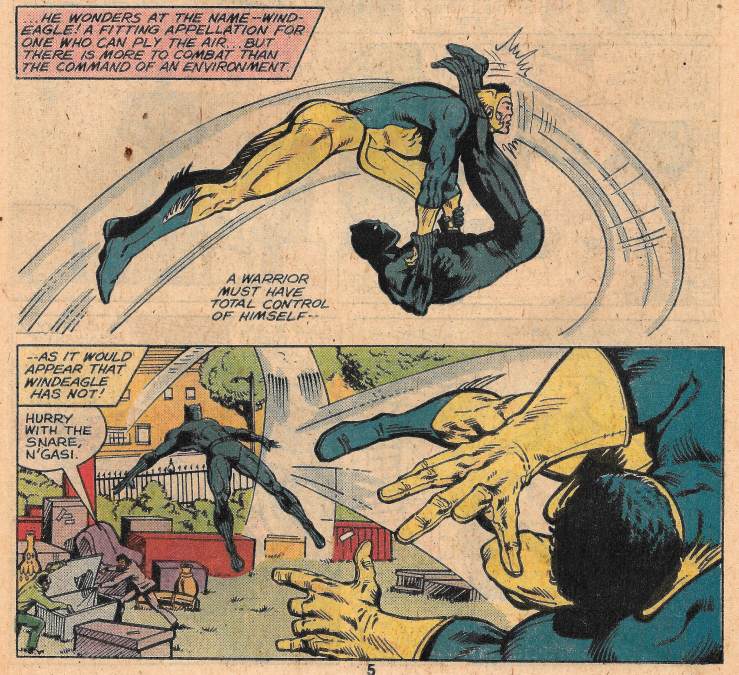 You’d think Windeagle would get the message that he’s over matched, but no. 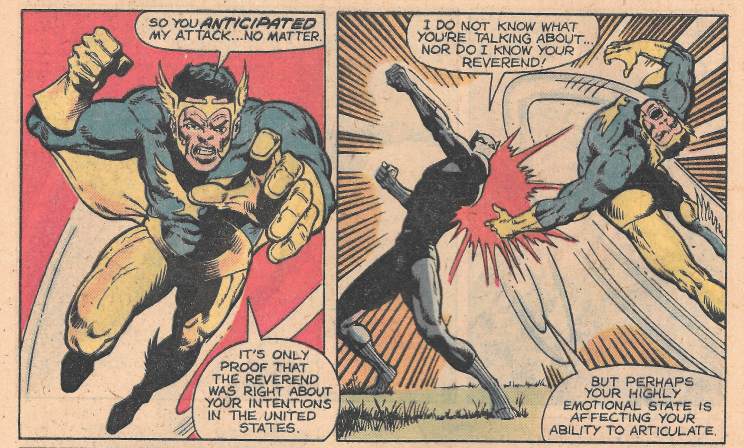 He comes back again… 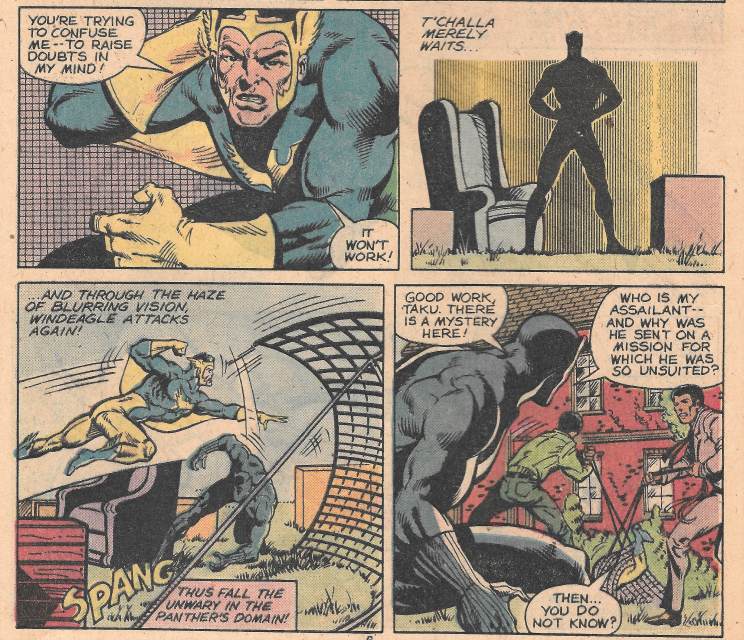 And again, until the other Wakandans have his butt trussed up in a net. Jerry Bingham proves in the first five pages that he’s got the chops to pull this off and we settle in as T’Challa tries to unravel the mystery of who this assailant is and why he wants the Panther dead.

Once inside another mystery awaits the Panther, two people who know him quite well, but whom he seems to have forgotten. 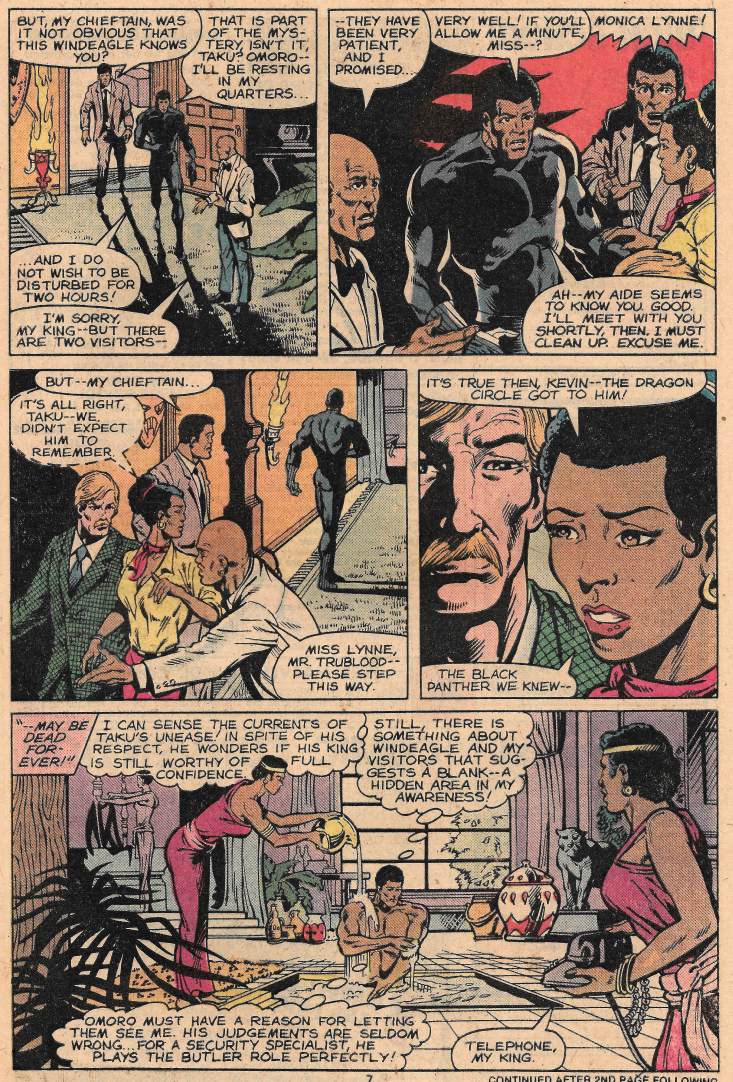 Which is VERY odd. Monica Lynne was the Panther’s first true love and a former fiancé. There is a ton of convoluted history here, not only with Monica but also with the Panther. The book spares you the Jack Kirby parts of it. Seems Kirby’s oddball things that were thrown in the mix during his twelve issues don’t meld much so meld with the more down-to-Earth tone that Hannigan wanted to set. So instead of trying to rehash it and keep those in continuity with this more grounded tale, he just says the Panther forgot them. He doesn’t remember the King Soloman’s Frogs and future telepathic version of himself that he once  met… and all the other cosmic nonsense.

I love Jack, but it’s easy to see where his stuff didn’t fit here.

Later he calls Monica to the throne room, tells her that he has forgotten her (Harsh!), and they rehash the second Jungle Action story arc which is basically Monica visiting her sister’s grave and being attacked by cultists… 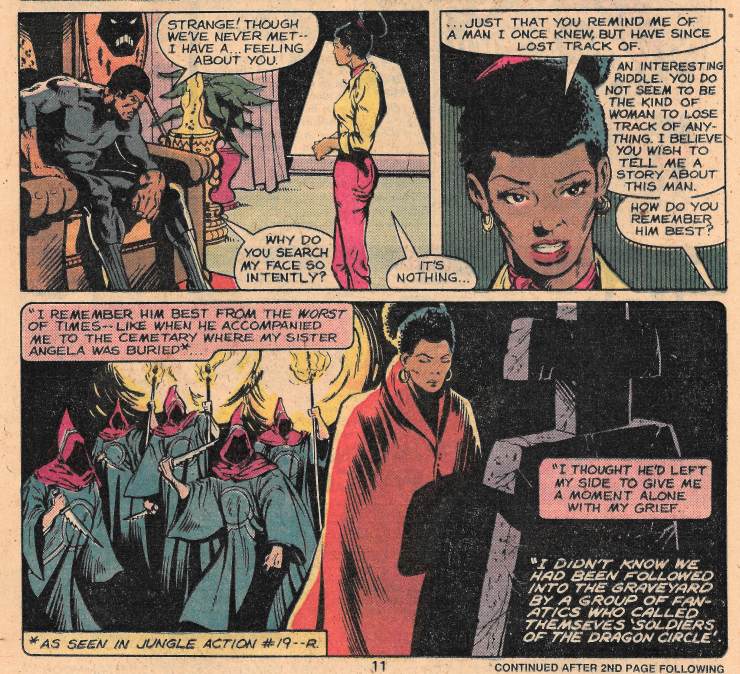 …from the Soldier of the Dragon Circle, who end up betting totally trashed by the Black Panther, but… 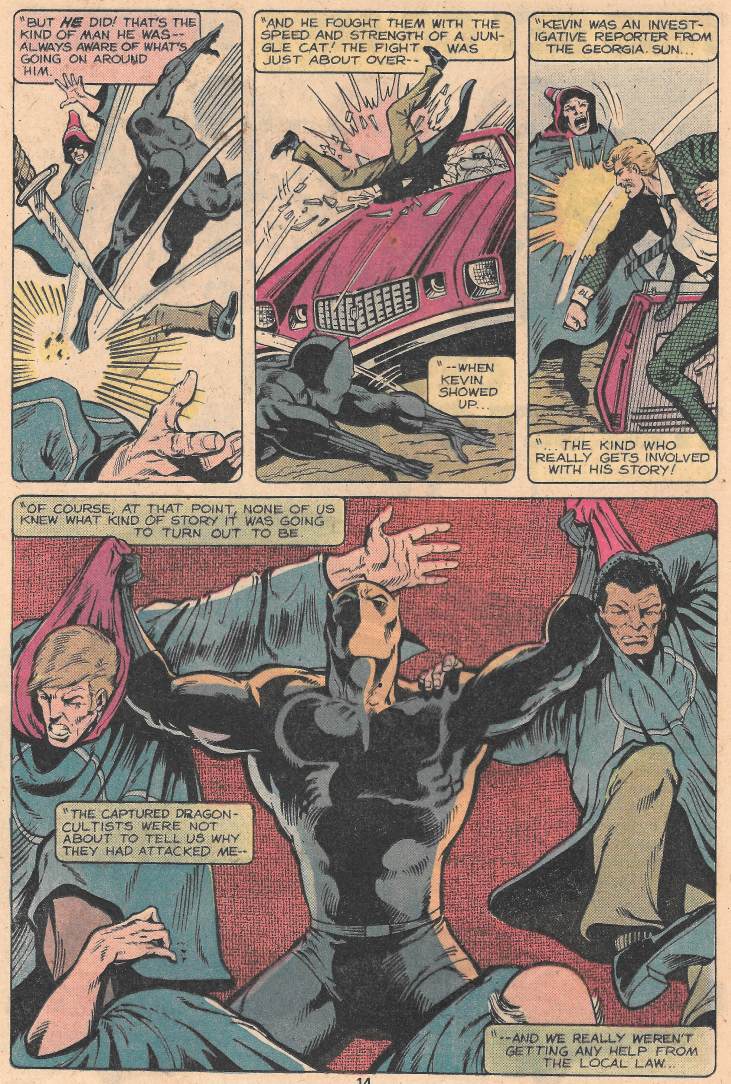 …are immediately bailed out of jail by unknown parties. Even a sympathetic Sherriff can’t help stop them. 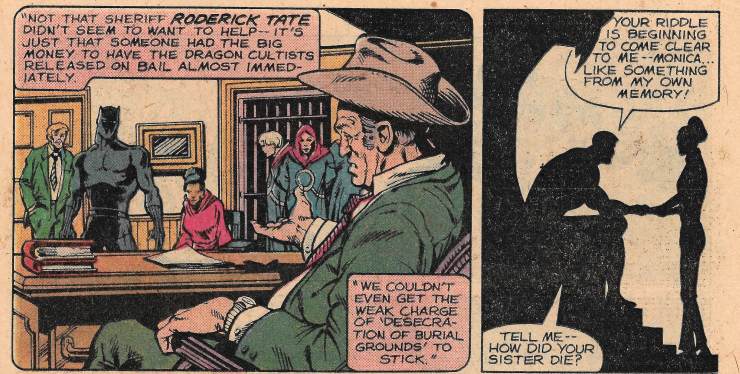 All of this leading back to the mystery surrounding the death of Monica’s sister, which appears to be a suicide with a broken clock telling the time of death even. 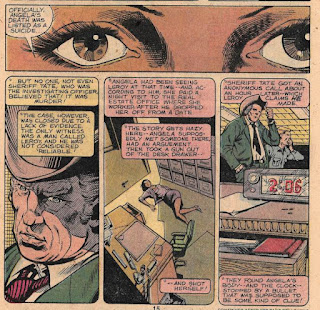 To add even more layers to this story onion, the Klan shows up the next evening, looking to settle a score with her friend Kevin over an article he had written about dirty real estate deals involving them and bingo! Black Panther verses the Klan! 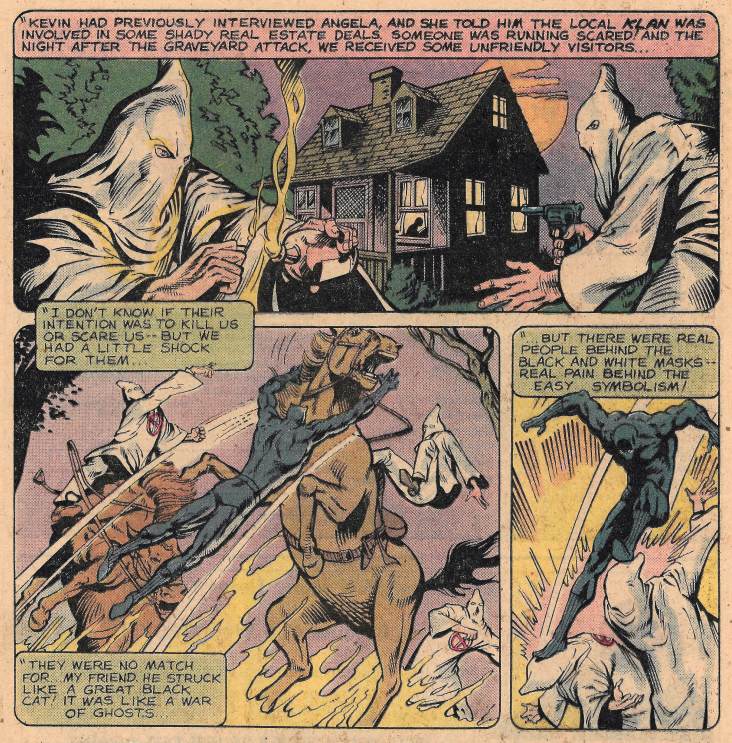 This is the issue that is wrongly attributed to Kirby in a meme that's making the rounds, but it’s all McGregor’s baby. Bingham makes it look like lots of fun. Especially…

…when the crazy cultists show up, leading to a donnybrook of epic proportions.

At this point in the flashback, Panther starts to remember, perhaps due to how badly the next bit goes… …because he is captured at gunpoint, crucified, and the cross he’s tied to set aflame only to some how escape unharmed. That seems like something you’d be unlikely to forget. 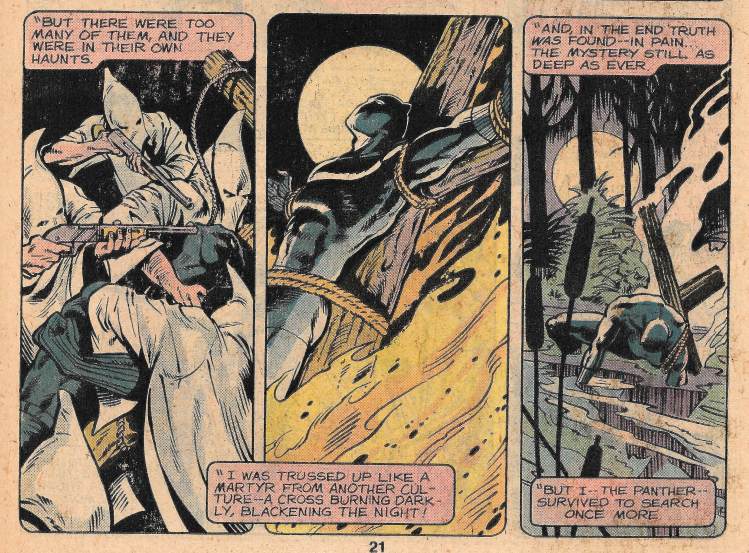 And if you thought all this flashy-mic-flashback served no purpose at all, we bring back in Windeagle, who in the past defeated the Panther… 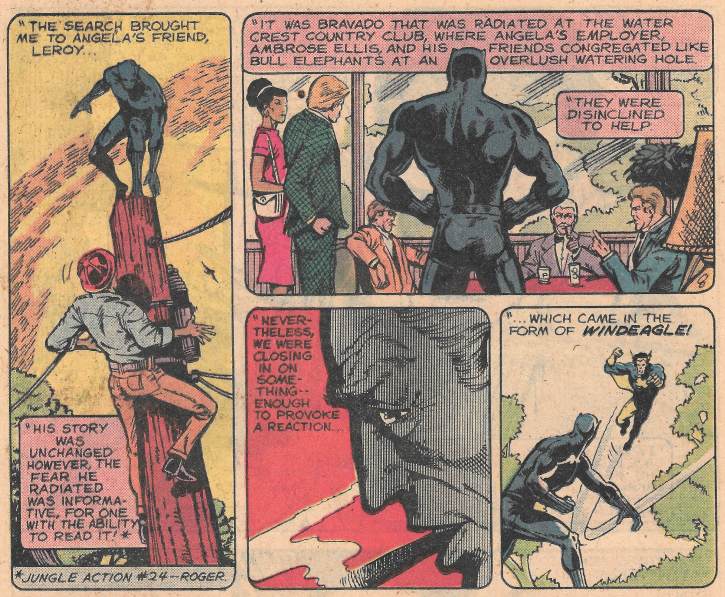 …and gets him stuck to a diabolical death trap on the side of a water-wheel. 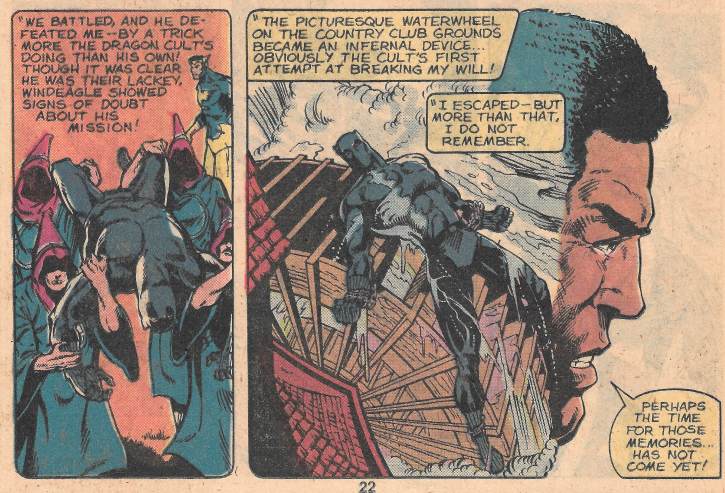 Panther escaped but the memories of all the Jack Kirby non-sense coming after this just ain’t coming back up. Which is all for the good. What isn’t for the good is that we’ve just recapped about four or five issues of Jungle Action in six pages of a twenty-page story. With all that time given to flashbacks, we have to give the loyal Panther readers something new, so we get Windeagle breaking free and gassing everyone but the Panther. 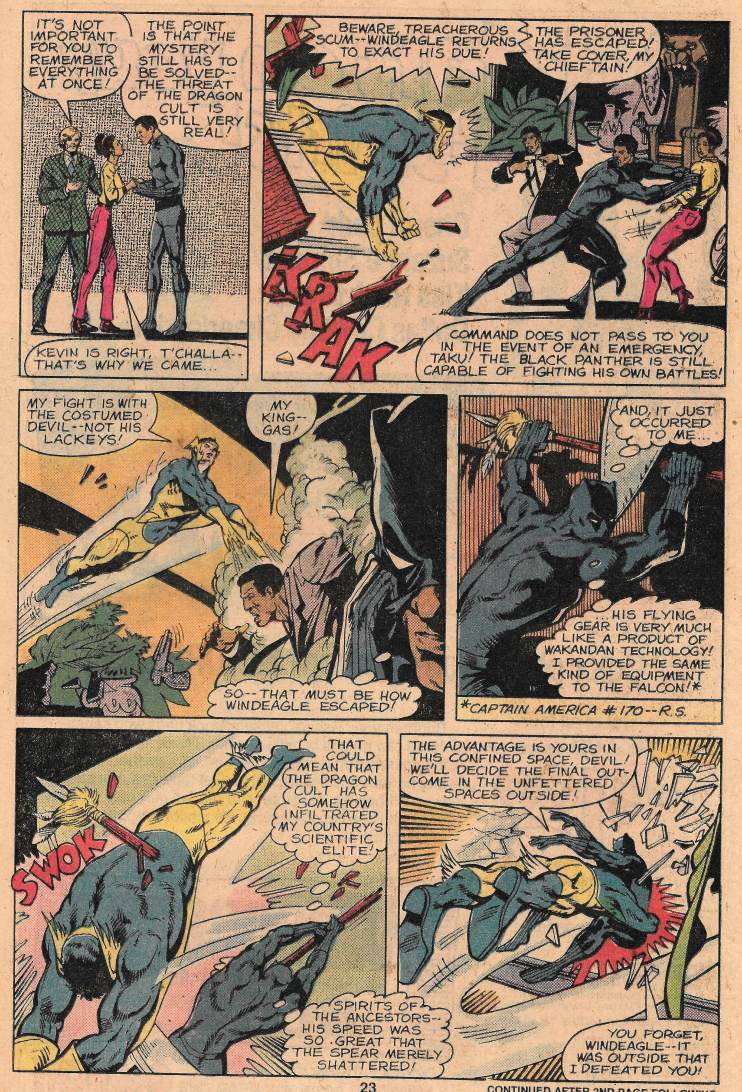 They crash through a window and once again we are fighting on the embassy’s front lawn, with panther really cleaning Windeagle’s clock on every pass. Doesn’t seem like flyboy’s heart is in it and even T’Challa notices it. 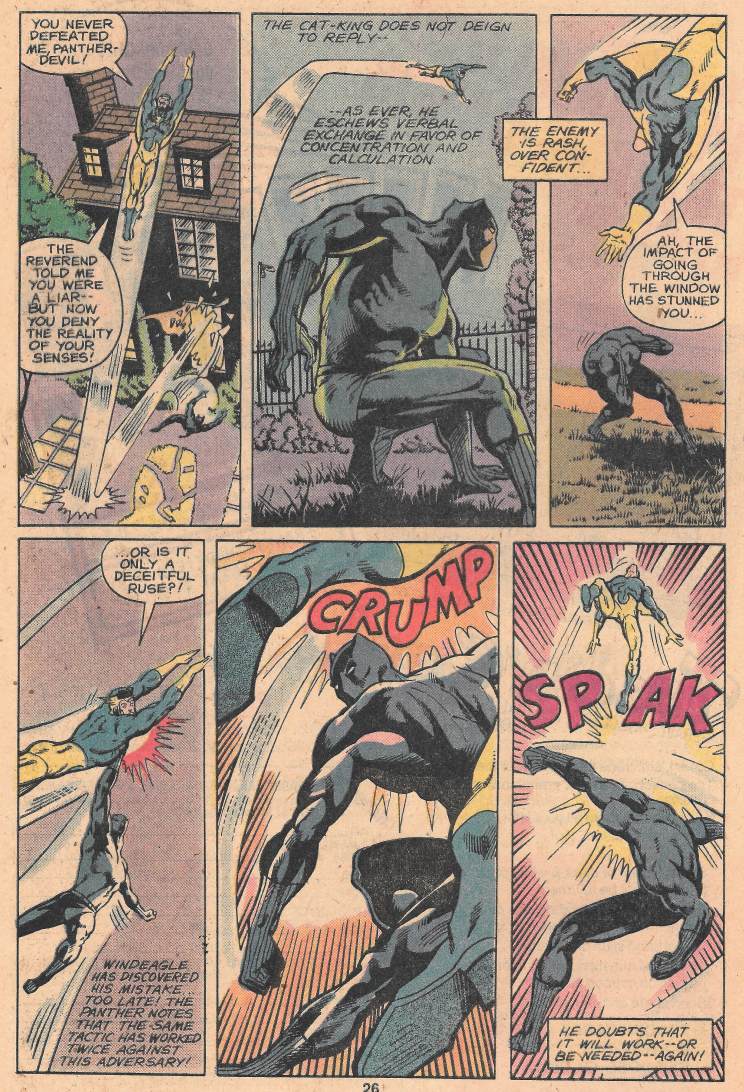 As does Windeagle’s mysterious employer, who is watching and decides to cut their losses with the floundering flyer. Here’s our story title for you. 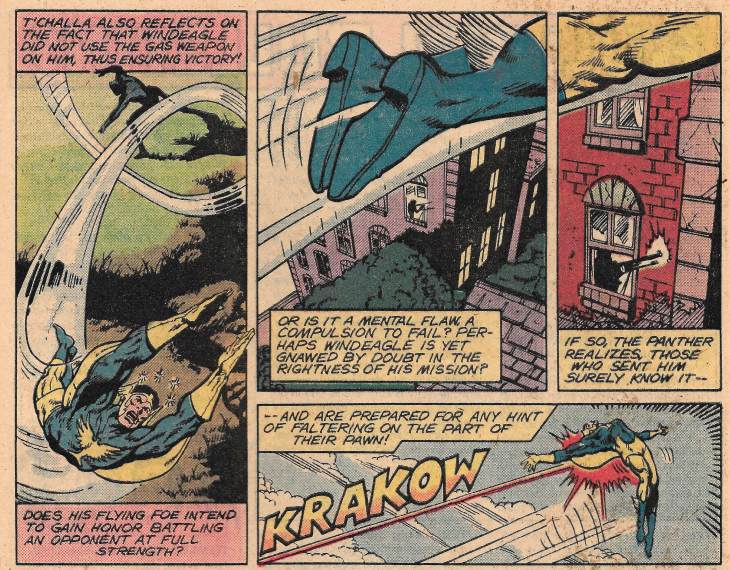 T’Challa rushes to the window of the assailant, but finds… 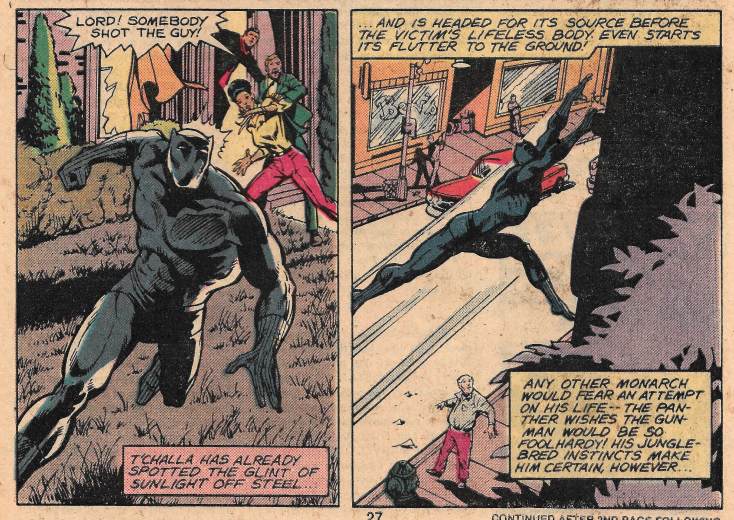 …an empty room and an abandoned gun. 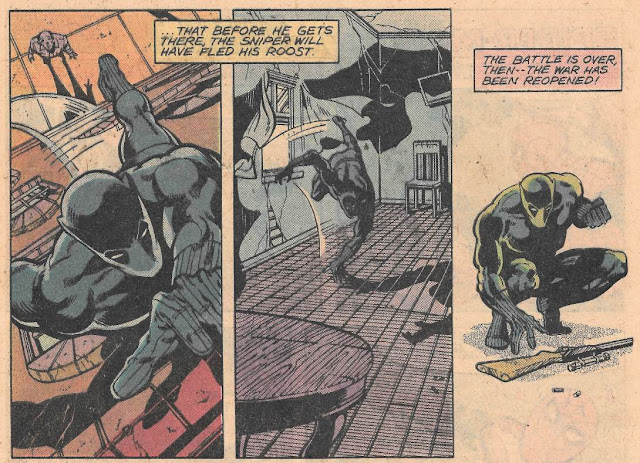 With another puzzle added to the increasing large mystery surrounding the Panther’s recent past, T’Challa retires back home. He leave’s Windeagle’s body laying dead in the street as the next issue blurb promises Even MORE flashbacks next issue. And out we fade. 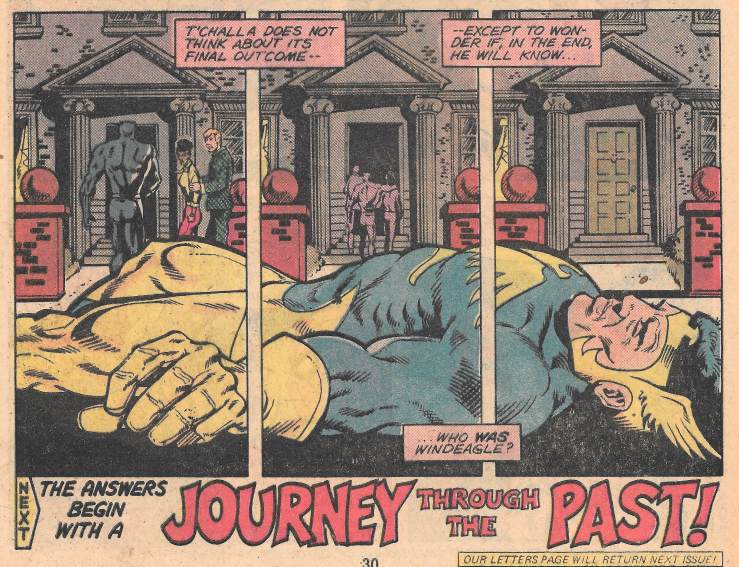 What to make of all this? It’s very hard to say. Hannigan tries to tease out a mystery of why Panther can’t remember certain facts as well as tie his arc to McGregor’s. It’s hard to state if he is trying to elevate a mediocre to one better or if this arc will turn out good in it’s own right because a majority of the book is flashbacks. You can’t really tell where the story is actually going.

Bingham’s art is a boon. He renders the Panther’s athleticism in great detail and his backgrounds are juicy with details. I love this last bit where he continues a character shot from one panel to the next with Windeagle’s body and several of the fight scenes. The book was lucky to have someone of his talent working on it.

In all, I’d need more story to figure out my level of love for it. Sadly, this is all the Crapbox spat out. It’s worth a look for the art alone and I’d definitely recommend picking them up if you’re a Panther fan.
Posted by SonOfCthulhu at 3:36 AM