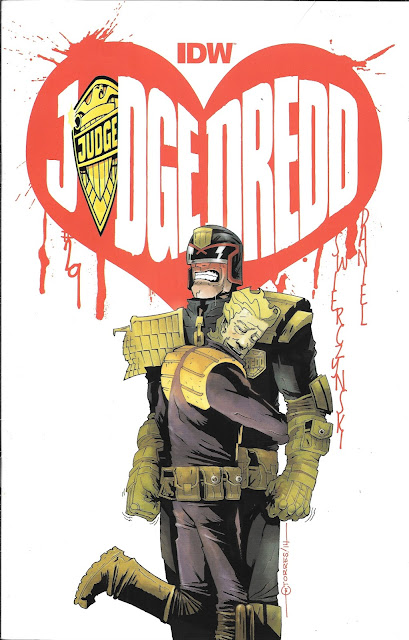 I AM the LOVE!

I’m sorry for this. There are a ton of Judge Dredd and 2000 AD comics in the Crapbox. IDW’s history with the character is so late in the day that I feel bad starting here. I won’t even go into the movie versions or DC holding the character license for a bit either.

What I will say is those beginning stories are so bizarre and filled with parody / satire that it makes it difficult to ignore all that history to start. I feel like you’ve missed something.

But this issue had a Valentines feel to it and features a sort of love interest for everyone’s favorite Mega City One officer. Although maybe not as good as I thought when pulling it from the Crapbox, since the following issue, number 30, is the last Dredd IDW published.

Let’s just see how it goes, why don’t we…

We begin with some sort of disease outbreak causing portions of the population to become “dead eyes”, or motionless mannequins. Several of them gathered outside the Server Tower complex of the Judges and then just shutdown. Someone assigned these guys in blue to keep an eye on them. Easy money, right? Since they don’t move and all. 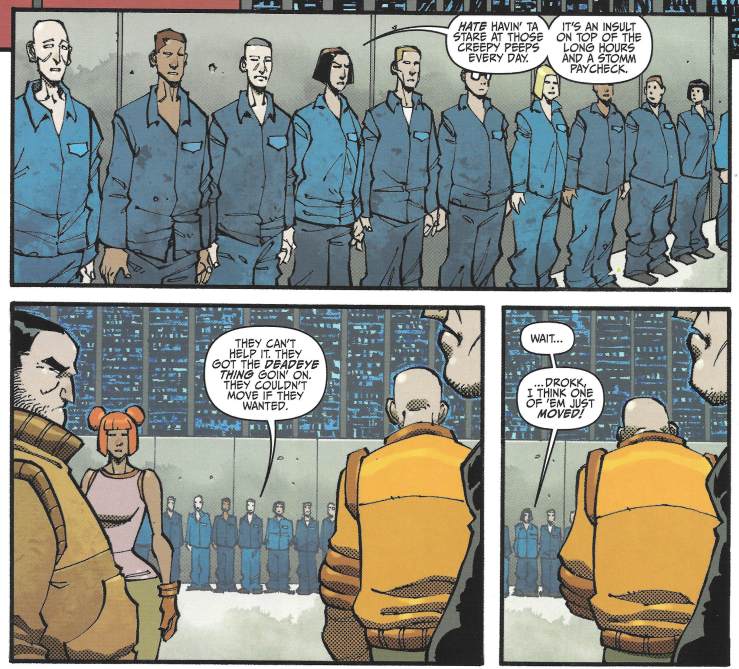 Then just as abruptly, they all start moving again and strip. 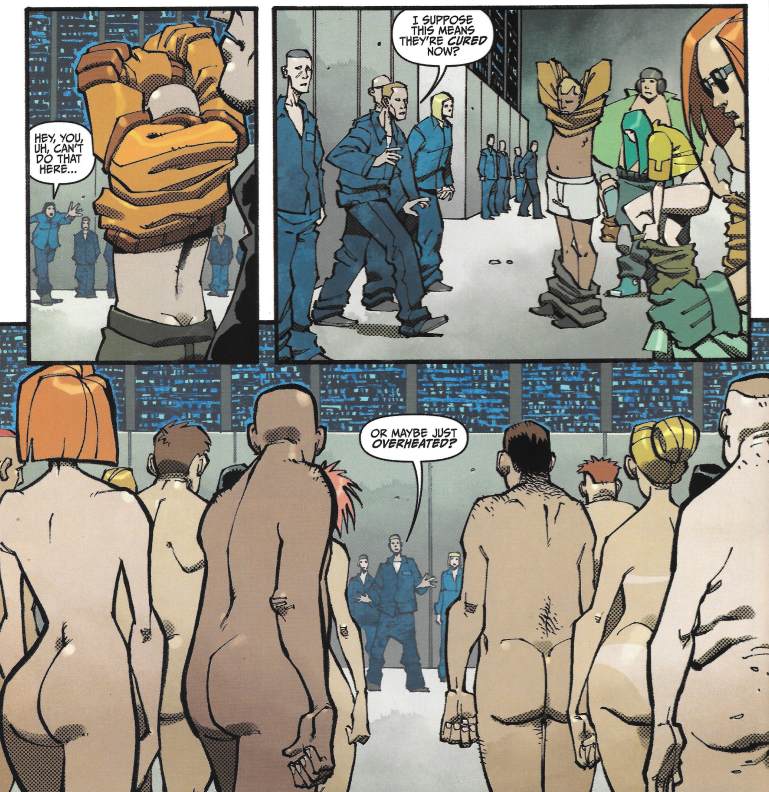 And then they peel their skin off...

Meet “G.O.D.”, ladies and gentlemen, the artificial intelligence that has just breached the computers of the Judges server complex. 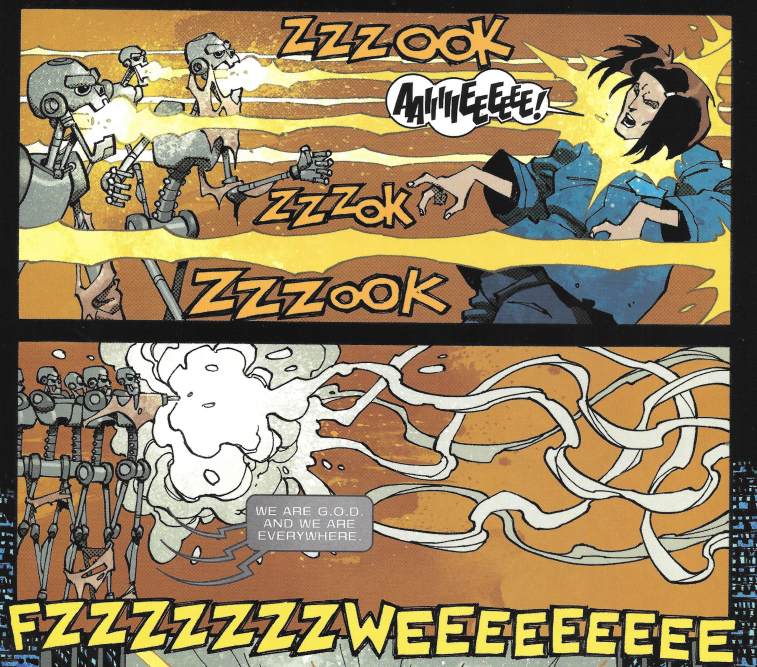 Not to worry, though. Dredd is on the case. 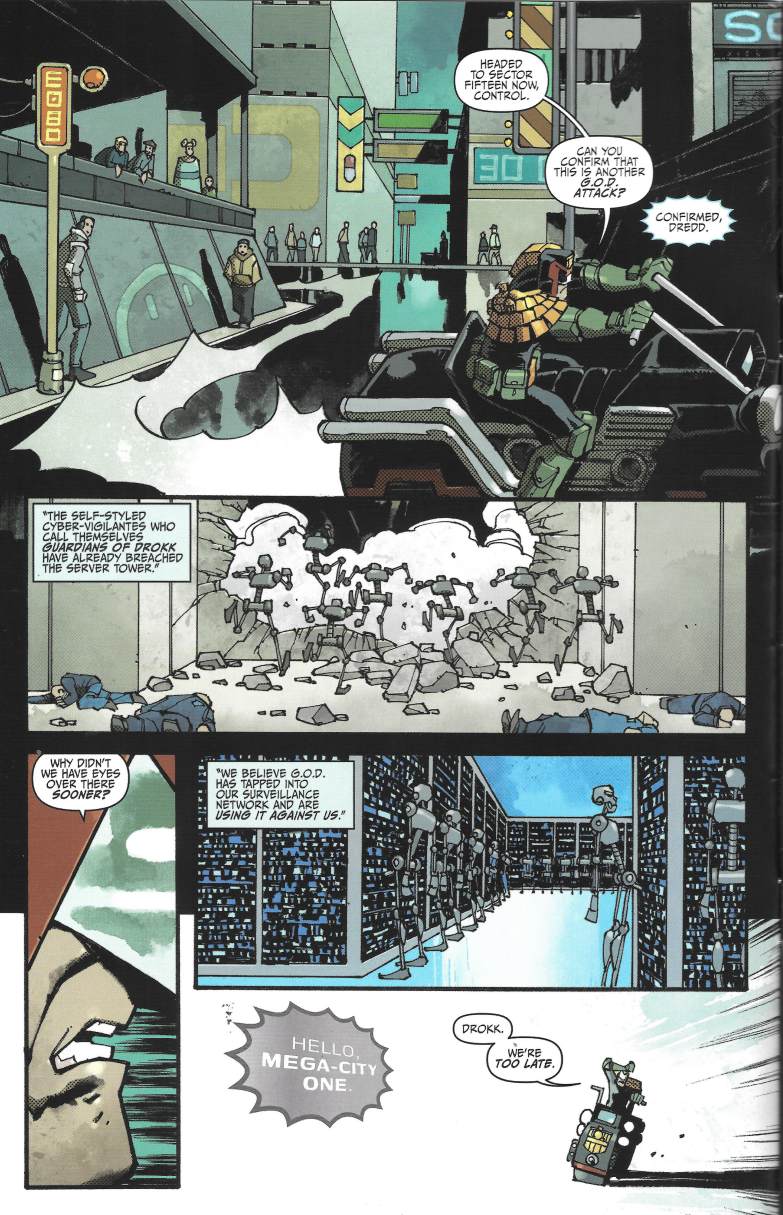 Although, I’ll admit to worrying quite a bunch as these robots plug into the servers with uncomfortably placed data ports. I mean, I don’t want to say that G.O.D. is F***ing the computers, but yeah…he kinda is. So there's your Valentine's Day nookie, for ya audience. What kind of trouble can this mean for Mega-City One? 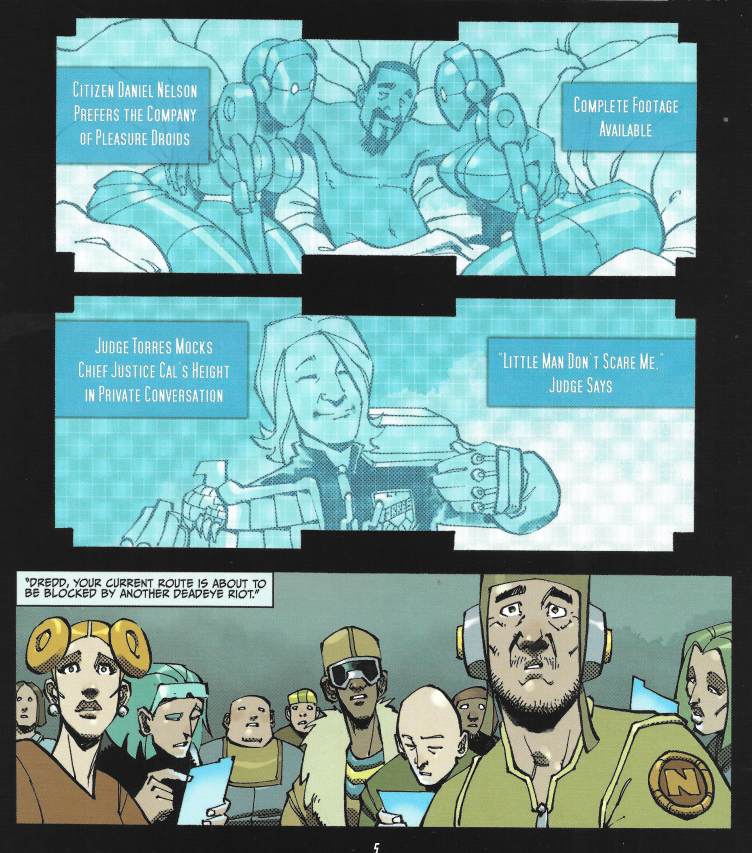 That’s not very sporting of G.O.D. You’d think an intelligence named after a deity would be more forgiving. Instead it airs everyone's dirty laundry. Dredd knows he has to stop the machines and fast, so he cuts through a riot of people who believe the Deadeyes have rights. 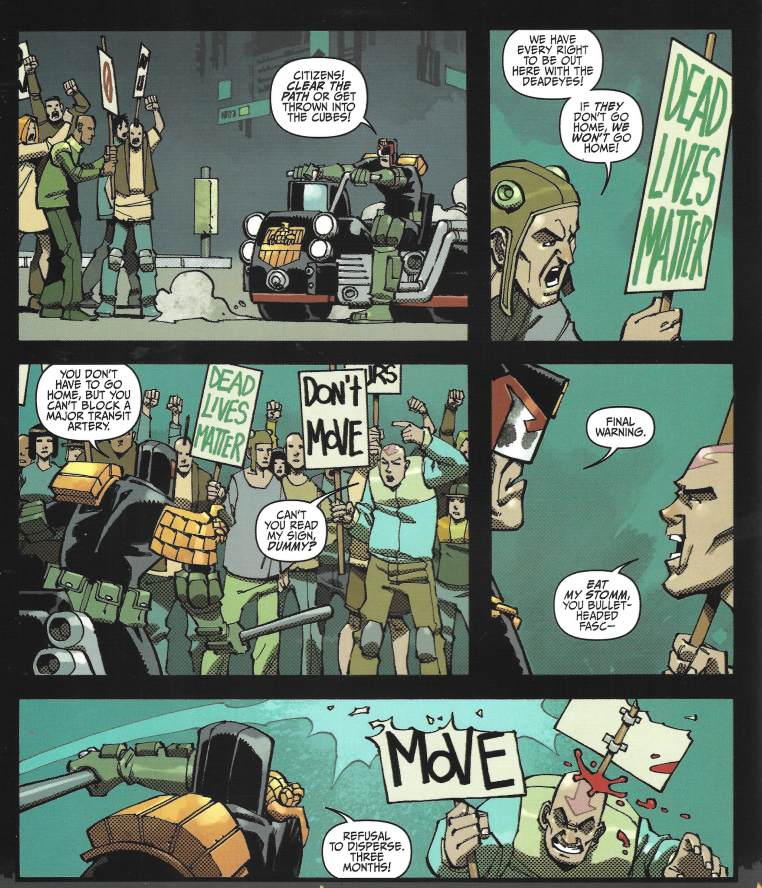 And of course Dredd handles this like Dredd. The odd thing here is the “Dead Lives Matter” slogan should piss me off, but is so ironic that I can’t really hold it against the book to be using the Black Lives Matter moniker and methods for this bit of ultra-violence. I easily see how someone could though.

I just find that "Dead Lives" pushes the envelope too far into parody to become anything I will be upset about.

And it’s not like he isn’t proved to be doing these people a favor as three street judges plow into the crowd next and injure around three dozen of them. 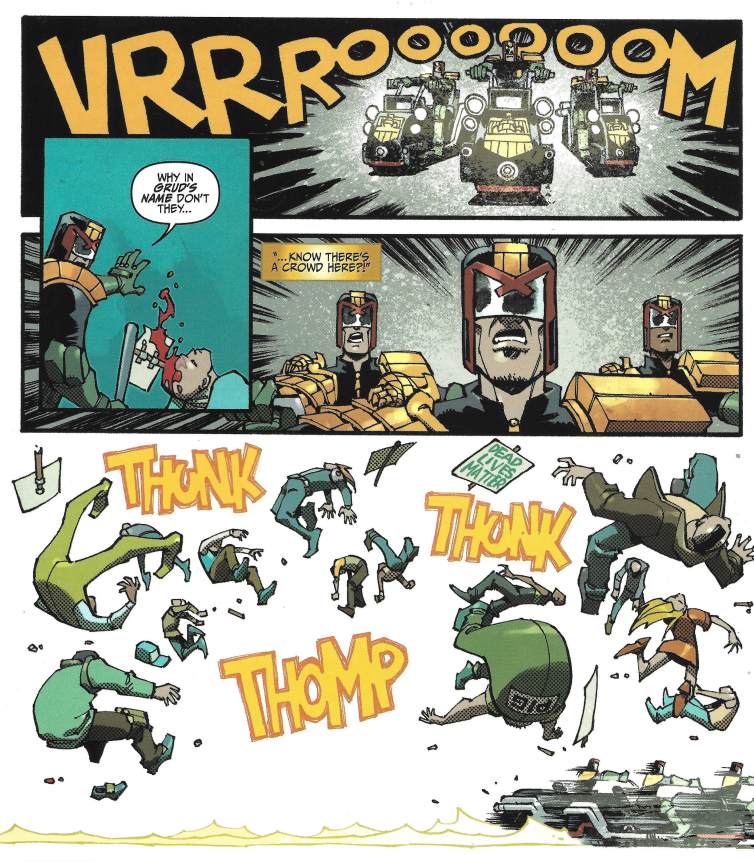 Dredd’s about to take off in pursuit of G.O.D. when a member of the Special Judicial Squad (SJS, like Internal Affairs for the Judge Dredd universe) shows up. Meet Verity everyone. She wants to question Dredd because he’s become chummy with Chief Justice. Which is a change…

…because the Chief Justice was evil and attempting to have Dredd killed. However something changed all that and it wasn’t just this matter of the Dark Judge attack that Dredd eludes to. You think Verrity buys that answer? 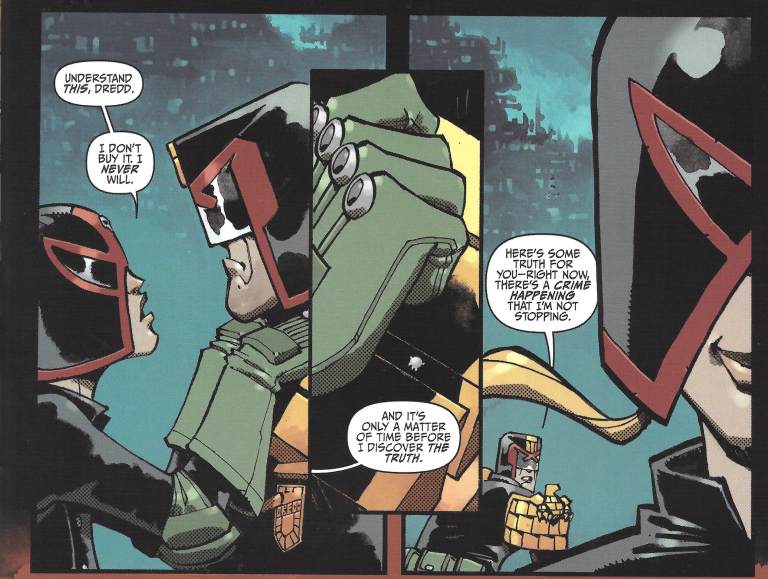 Nope and the sneakly little witch plants a bug on Dredd. Which will come in handy because the next place he goes is to the see the Chief Justice. Note the “don’t get used to it.” 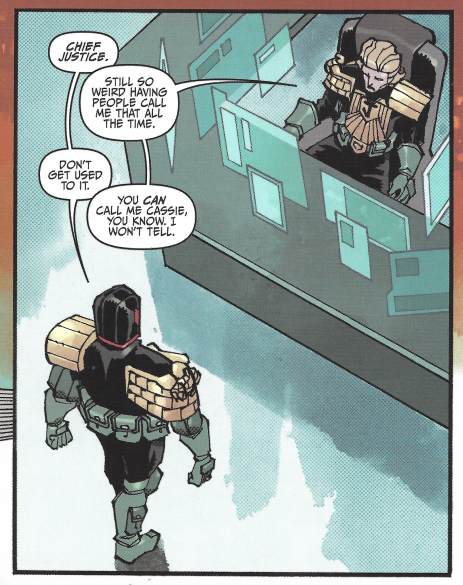 That’s because the Chief Justice has had his body stolen by Judge Anderson of the Psi Division. The Chief Justice was one bad cookie, corrupt to the core, but insulated so well that nothing could touch him. Nothing except Dredd and Anderson, apparently. Now Anderson is controlling his body and nobody but Dread is the wiser. And if they put him back in this body, he might get away with all the bad he’s done. 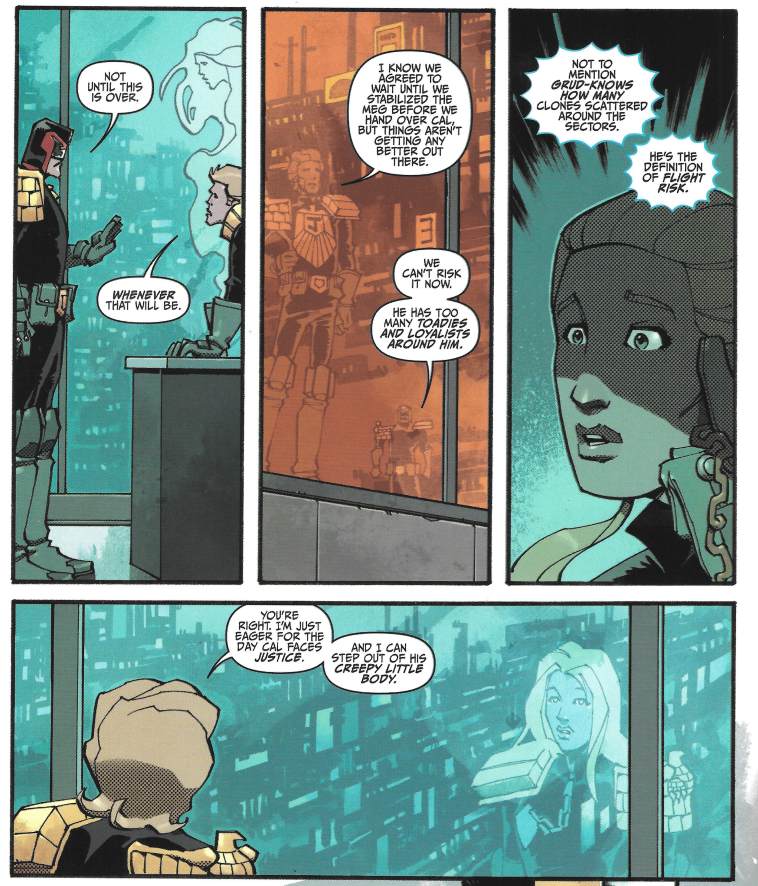 Judge Verrity gets an earful of this, but totally misunderstands. You’ll see how in a bit.

As for Anderson, she is having a clone grown of her old body which was destroyed after she hopped into prune face. She tells Dredd of her escape route out of this mess. Dredd mentions Verrity in passing. 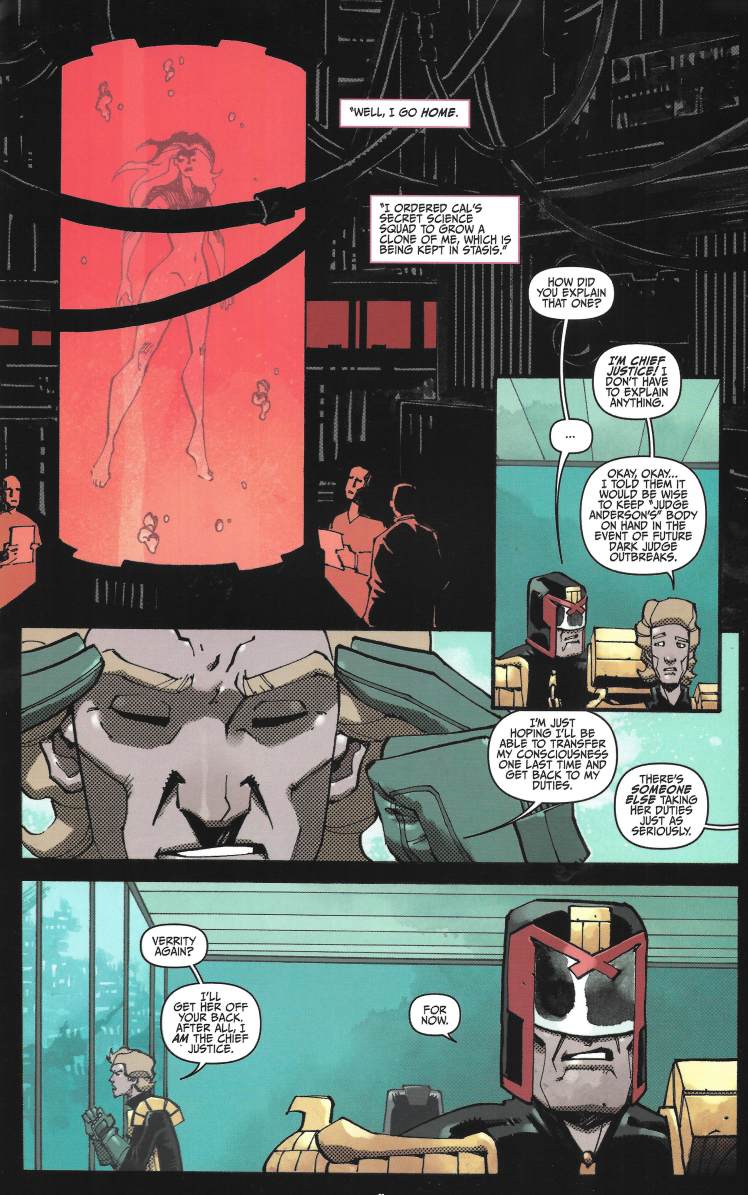 And Anderson says she’ll take care of it.

So when Verrity is called in, she expects to be killed or she will make the Chief Justice confess, but she believes him to be crazy not supplanted by another consciousness. 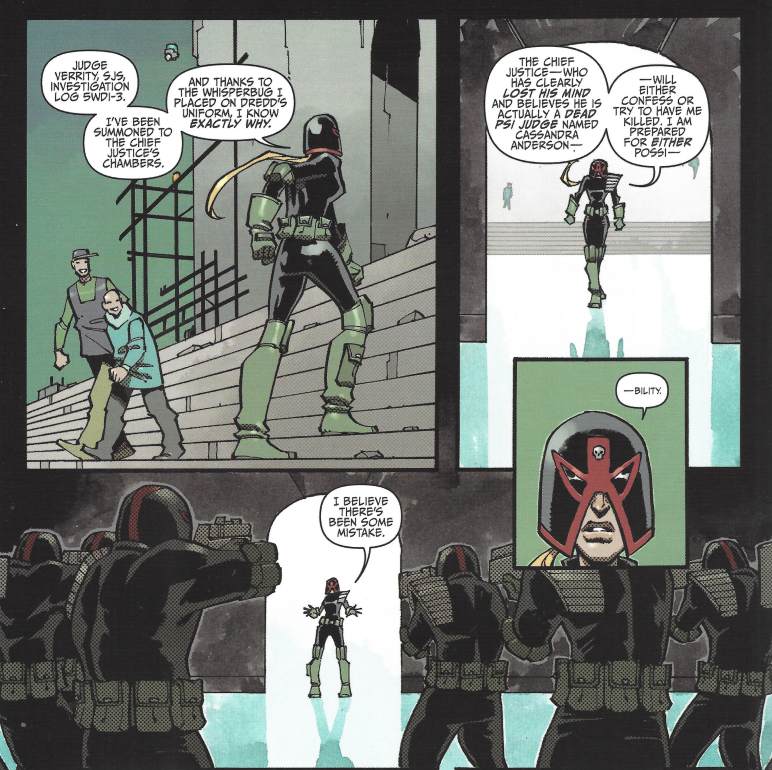 But she’s taken into custody before she can do anything.

Meanwhile G.O.D. attacks and the Deadeye riots consume Mega-City One. Anderson thinks she can use the Chief Justice to talk some sense into the populace. 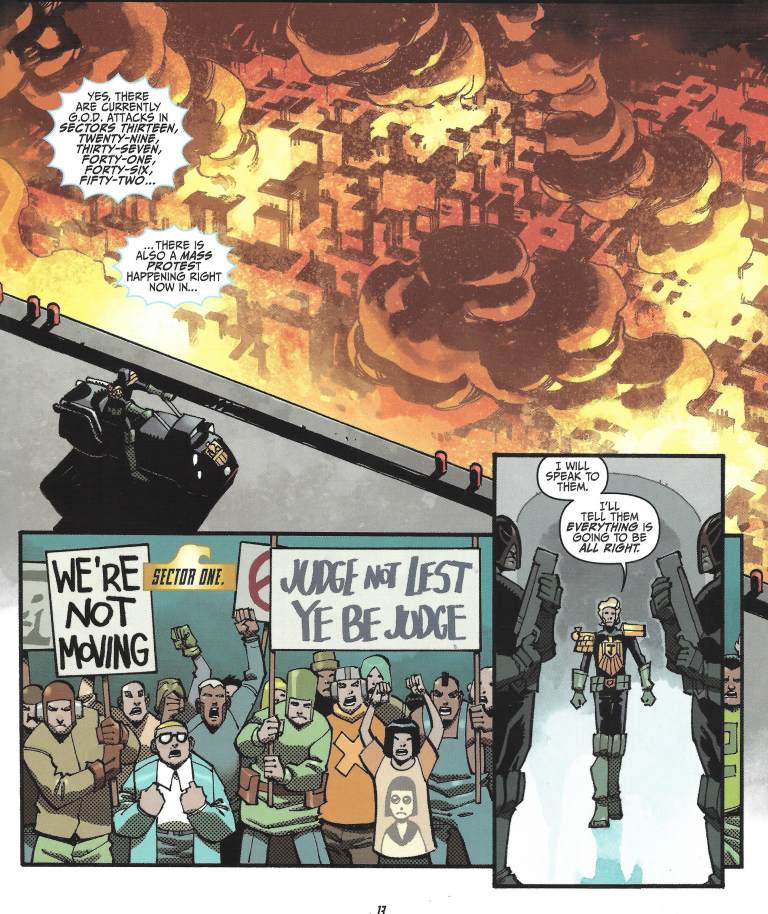 While Dredd figures out the multiple attacks are meant to draw forces away from the new Hall of Justice. 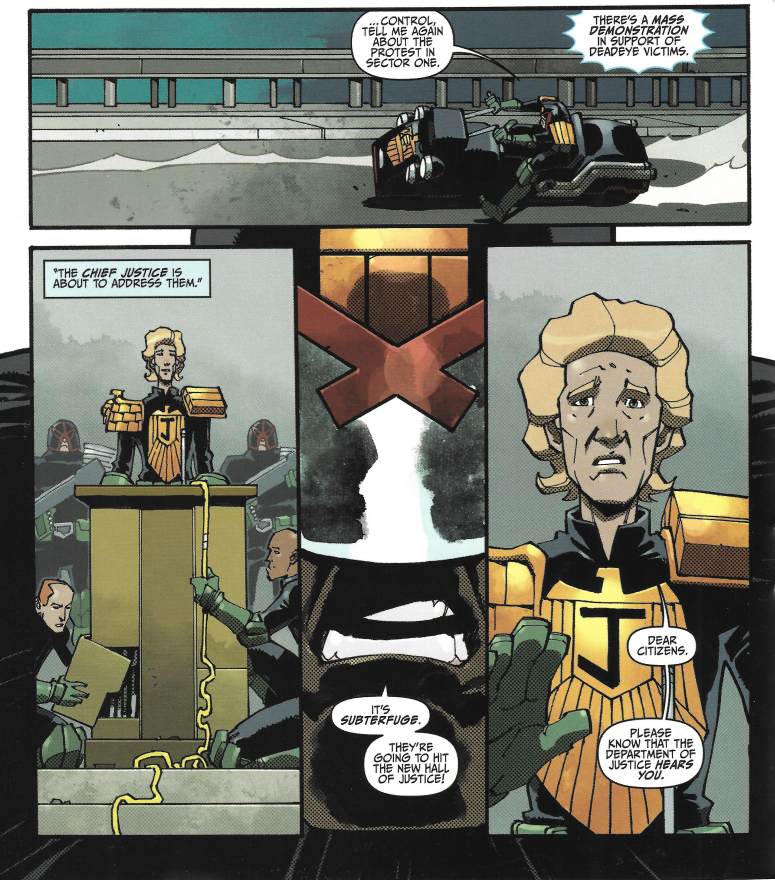 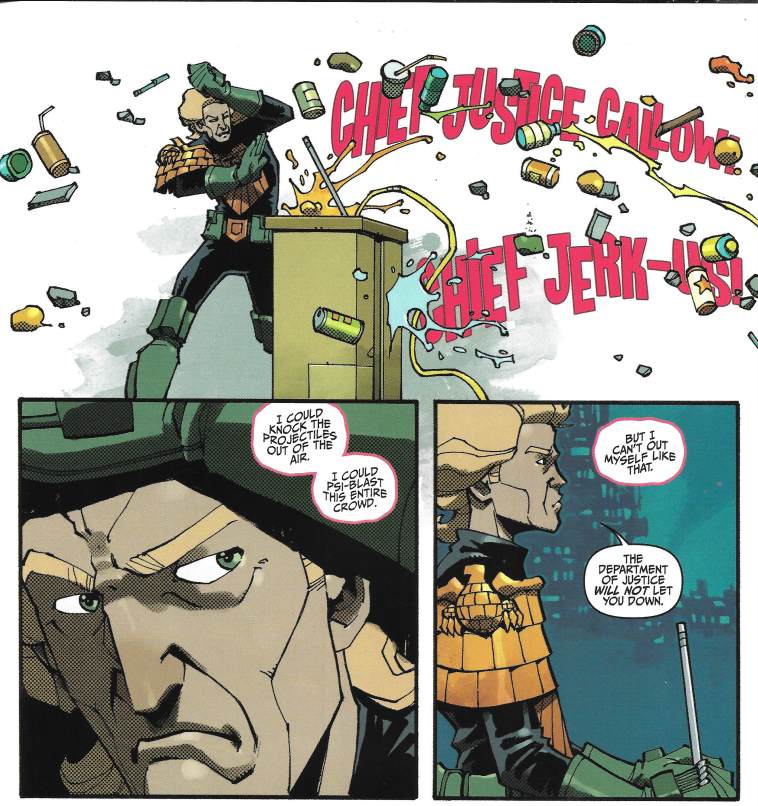 …but she soldiers on and almost wins over the crowd, until G.O.D. takes a hand… 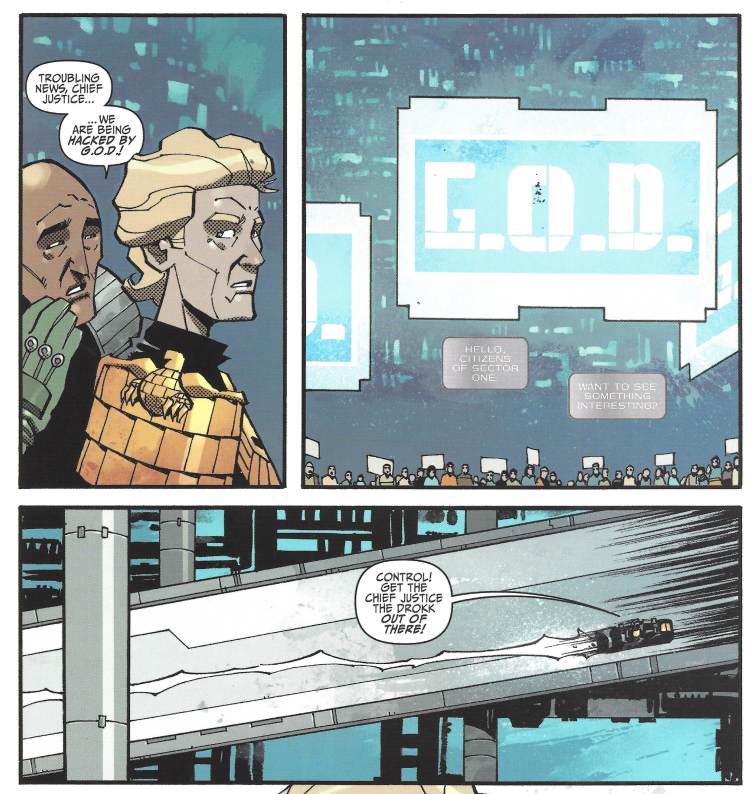 …and exposes the things the REAL Chief Justice is guilty of: killing the rest of the Council of Five to wrest control of Mega-City One for himself. 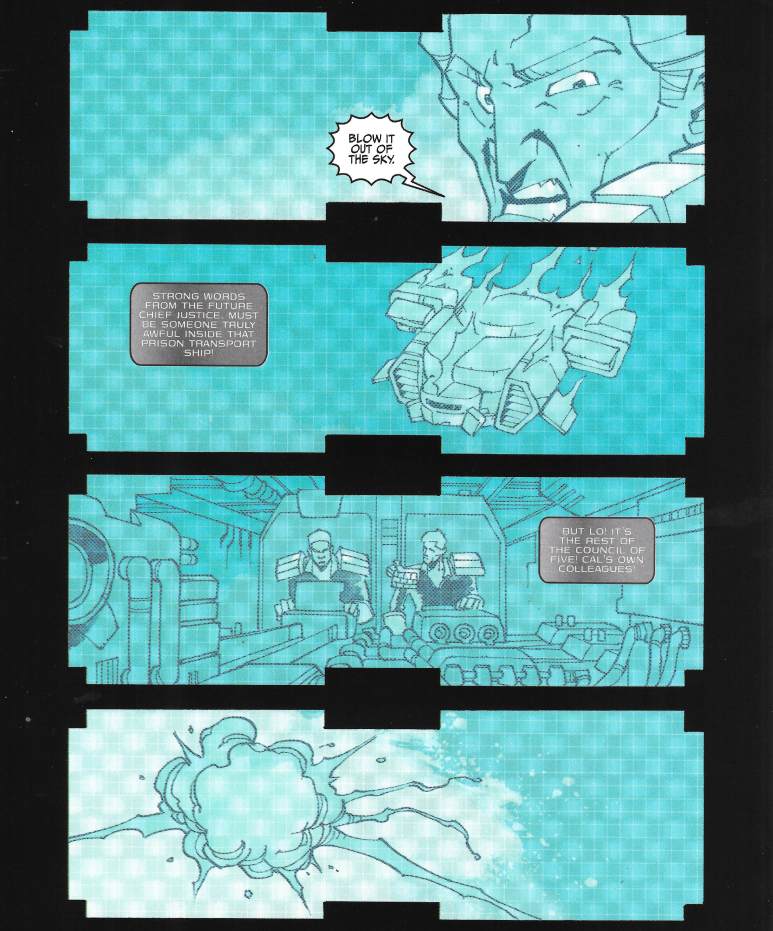 To say this irks the populace a bit is an understatement. And Dredd looks to be immobilized as well. 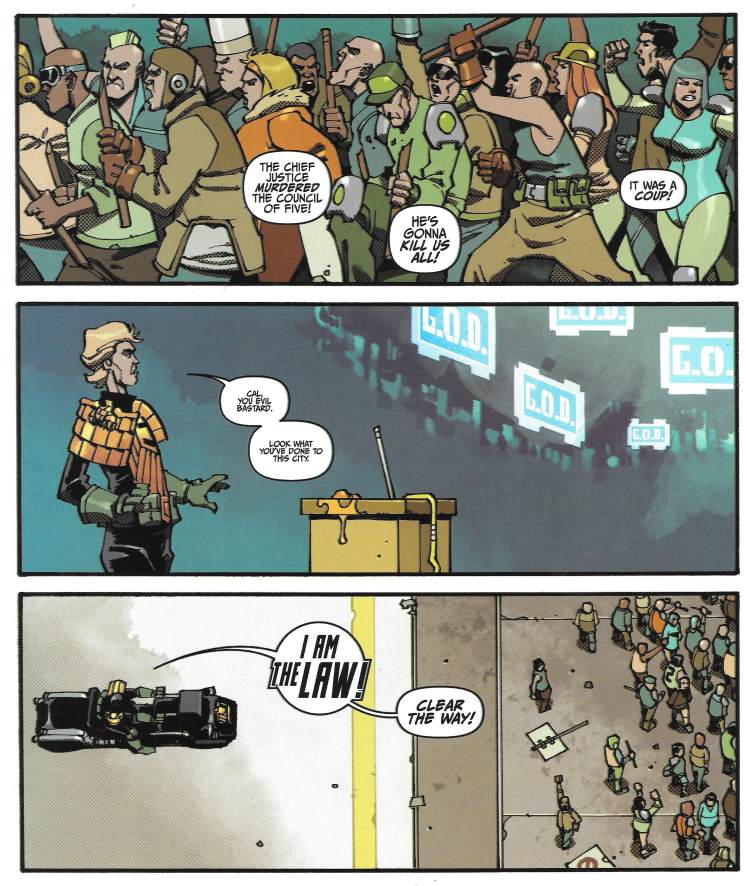 We end with Anderson in the hands of an unruly mob. 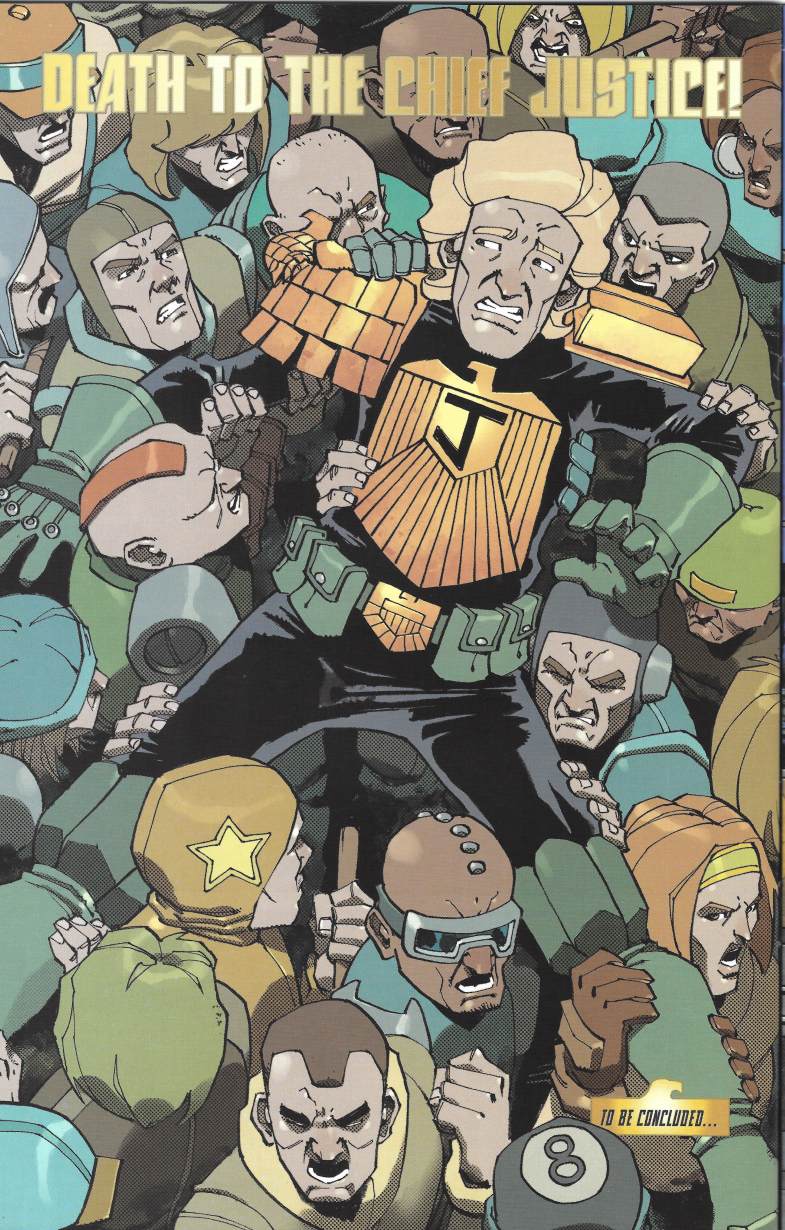 I mean this was less lovey-dovey than the cover made it seem, but…think of it like a candy from a heart shaped box of chocolates: you never know what you are going to get.*

See all you lovers tomorrow, as the Crapbox goes way back to an early issue of the good ole FF to meet one lad who has a big career on the movie screen.


* TM Bubba Gump Enterprises, Inc
Posted by SonOfCthulhu at 3:09 AM