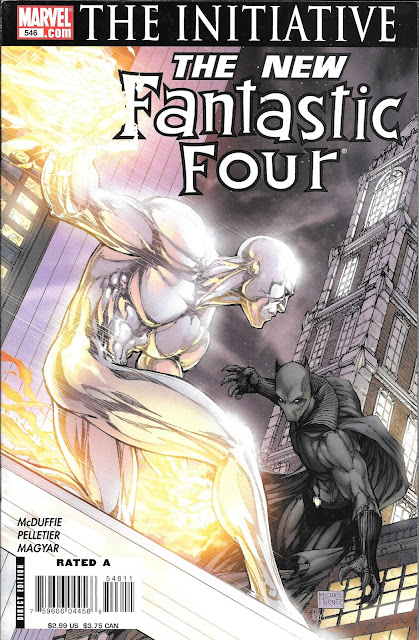 I did that “Gravity” joke in yesterday’s sub-title? Really?
I guess I toad-ally* blew it for today’s issue
*yes, I know the difference between toads and frogs

I started this whole mess off two reviews ago stating that sometimes bad ideas lead to good stories. Let’s jump right into the conclusion of this mess and see if I was right…

We begin with T’Challa and former Deathlok, Michael Collins, in foldspace a few minutes from Earth. Collins lets T’Challa know that he doesn’t like running from a fight. Panther tells him “That’s where we differ. I’m not one for LOSING a fight.” Yeah, I’m digging this as the new FF. Panther has too much Shaft style coolness to not get all “fist pumpy” right about here. 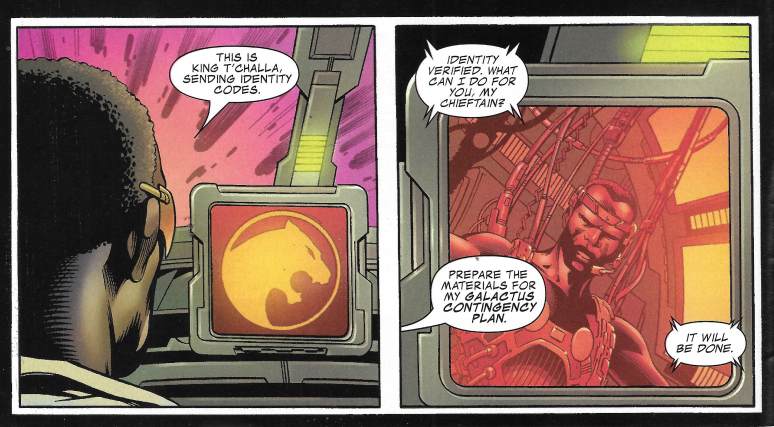 (Someone mentioned that Storm and Panther’s kids would be the Thundercats. And they’ve already got the logo under wraps)

Michael brings up that he’s left the rest of the group hanging out to dry while they get this plan set in motion. T’Challa says that is taken care of too. 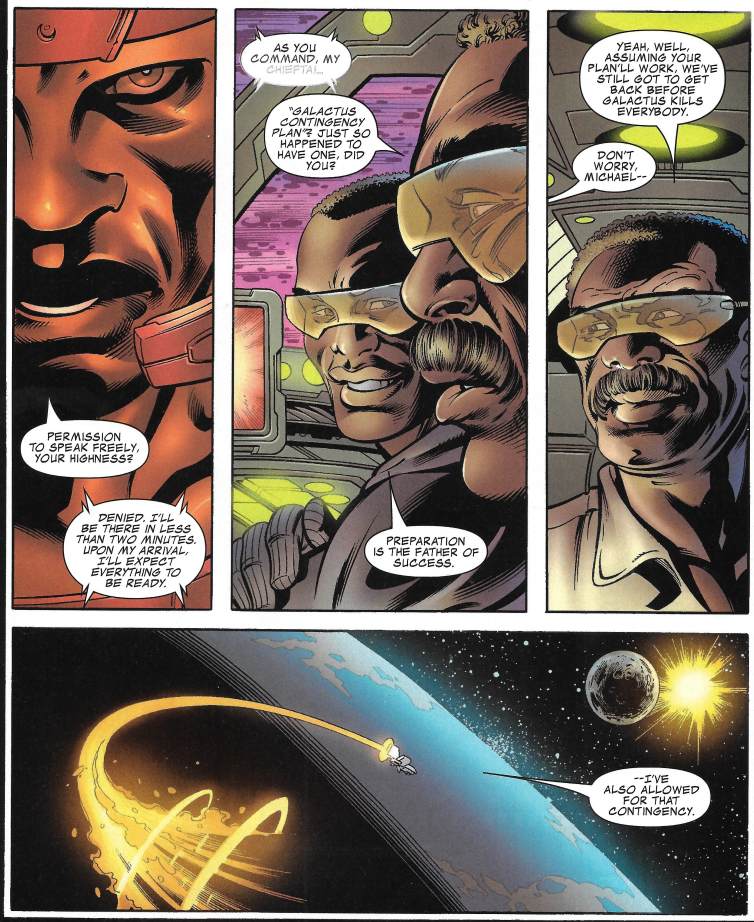 Okay, story! Don’t let me down now. I’m grinning and happy. Do your stuff. What’s up next?

Oh, that’s right! Gravity is back and he’s full to the brim of Cosmic Protector energies. He’s facing off against Stardust and Silver Surfer while the FF look on. Who wouldn’t love the book at this point? 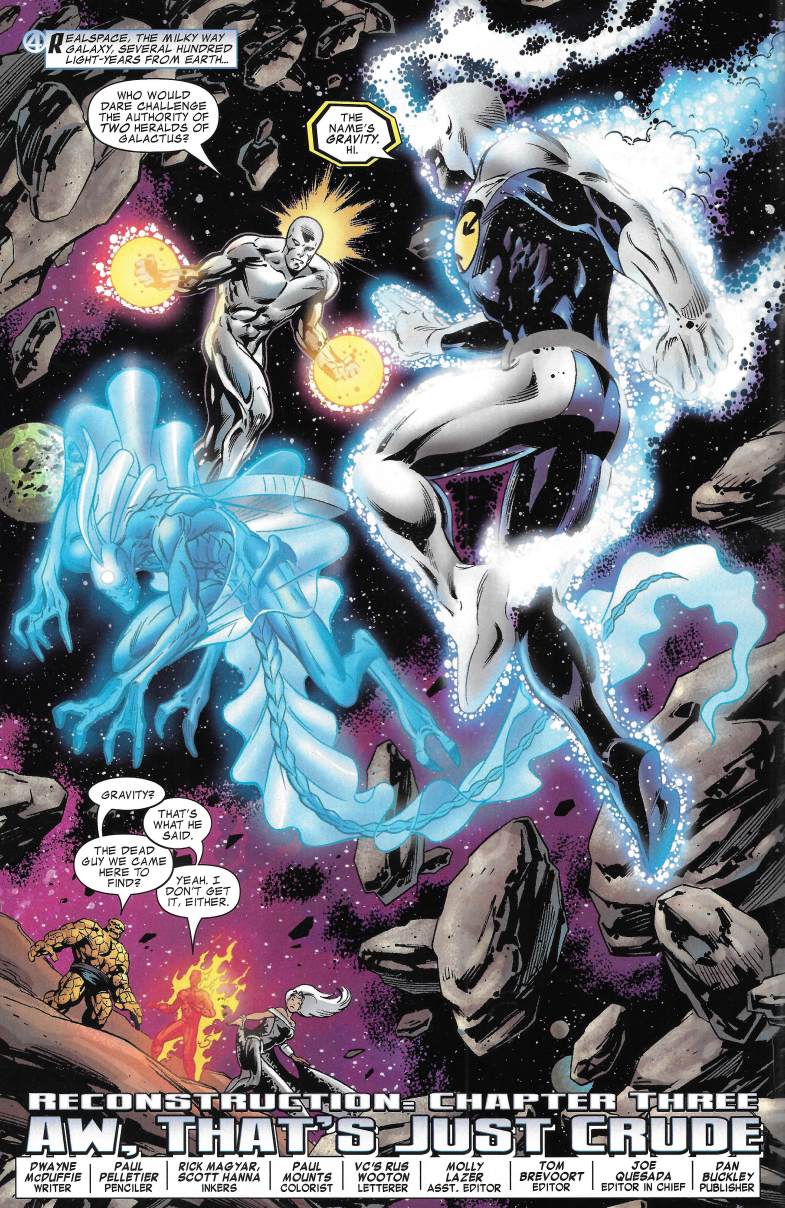 Now we get a bit of interaction before everything goes back to hitting the fan again. Surfer asks if this is the corpse,…er, guy the FF is looking for. Ororo asks if Gravity is actually Greg Willis. Greg freaks out over her knowing, then freaks out again over meeting the Thing. Johnny gets his feelings hurt and we end with our summation of the last two issues, in part. 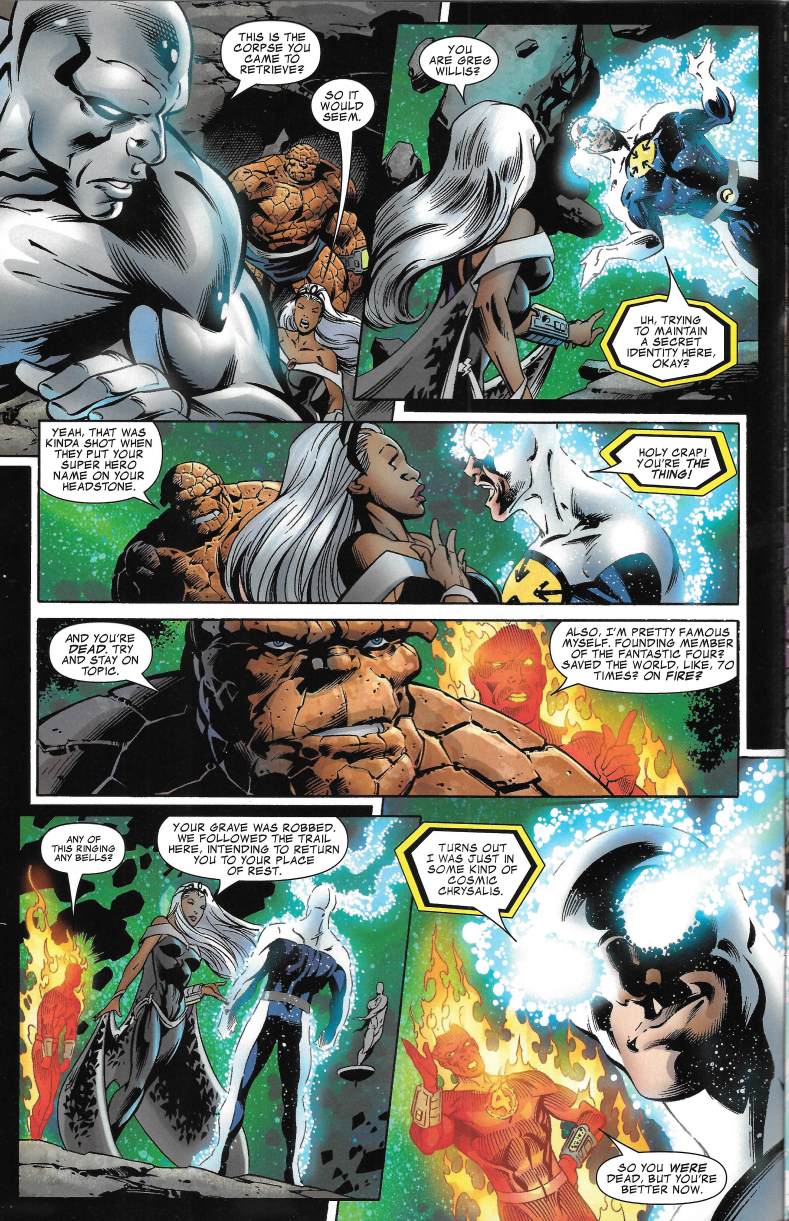 One thing McDuffie knows how to do is to create fun dialogue and to prep cues for comedic patter. I can’t like this enough, but don’t we have some smackdowns about to happen?

Yeah, this next bit confirms we do. Gravity and the 3/4ths of the FF versus Surfer, Stardust and the G-Man. 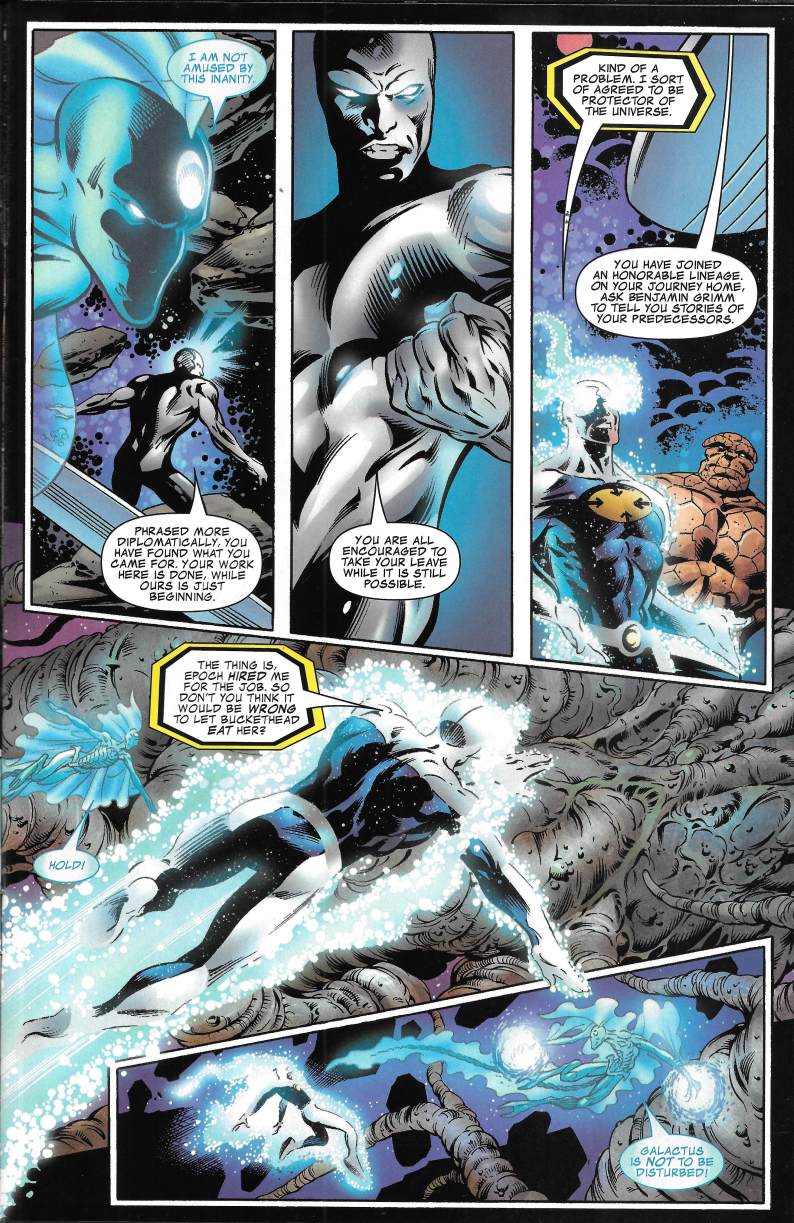 Stardust starts us off by trying to kill Gravity. Storm gives him a shocking response to that action and here we go for round two. 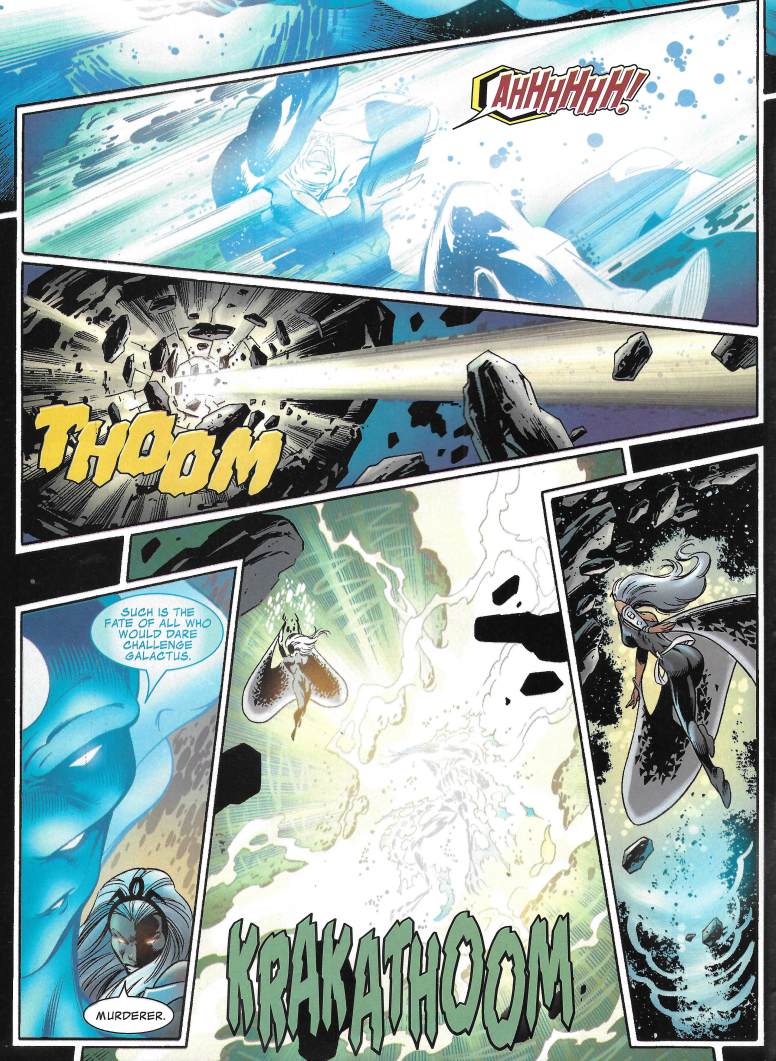 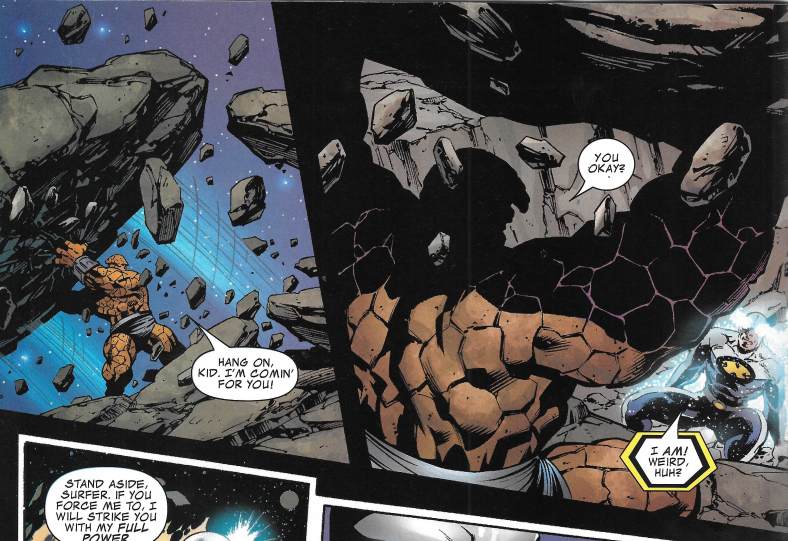 …only to find he ain’t. While Storm looks to get a bit of payback applied to her from Stardust. But enough of that, as we switch scenes to Reed and Sue walking on Titan and discussing the end to Civil War. Amazingly enough this is the exact wrong time for this. I could care less about Reed and Sue’s conversation because all it does is delay the great action setup that is going on with the current team. Here’s the resolution of three pages of chit-chat. 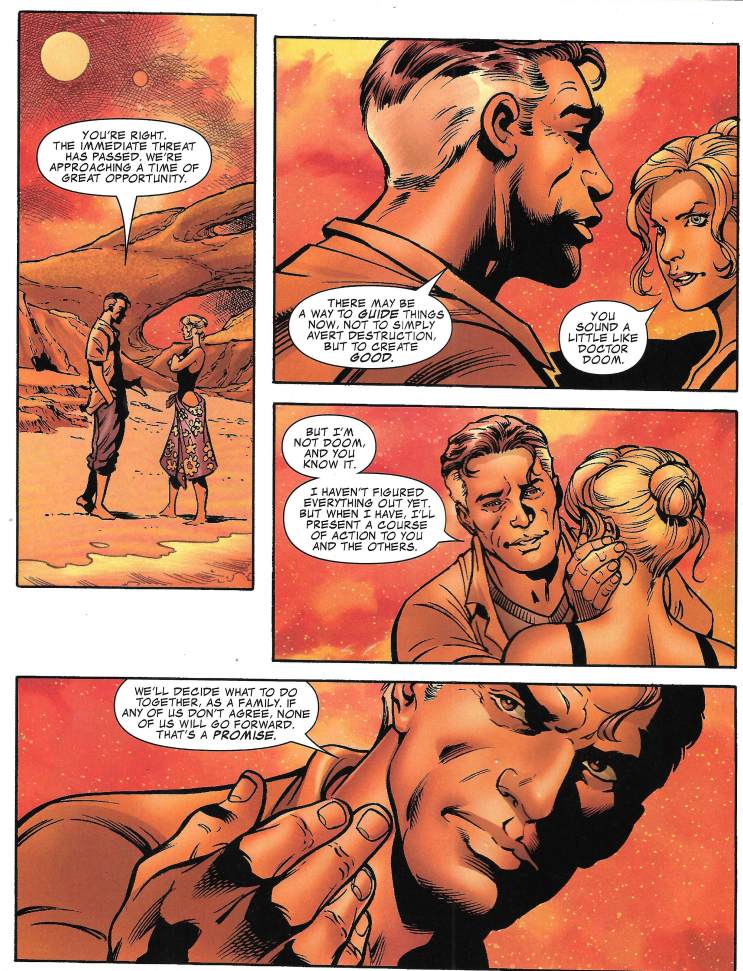 Oh, that and a image of a big space potato asteroid thing that looks a bit like Ego Mentor’s computer flashes up before the pair as a possible lead-in to next issue.

Right NOW we need to discuss “Plan G” and all the boxes of things that Panther is picking up. Even without the optimal help from an air force, shape-shifter and the Hulk, I’m intrigued by where we are going… 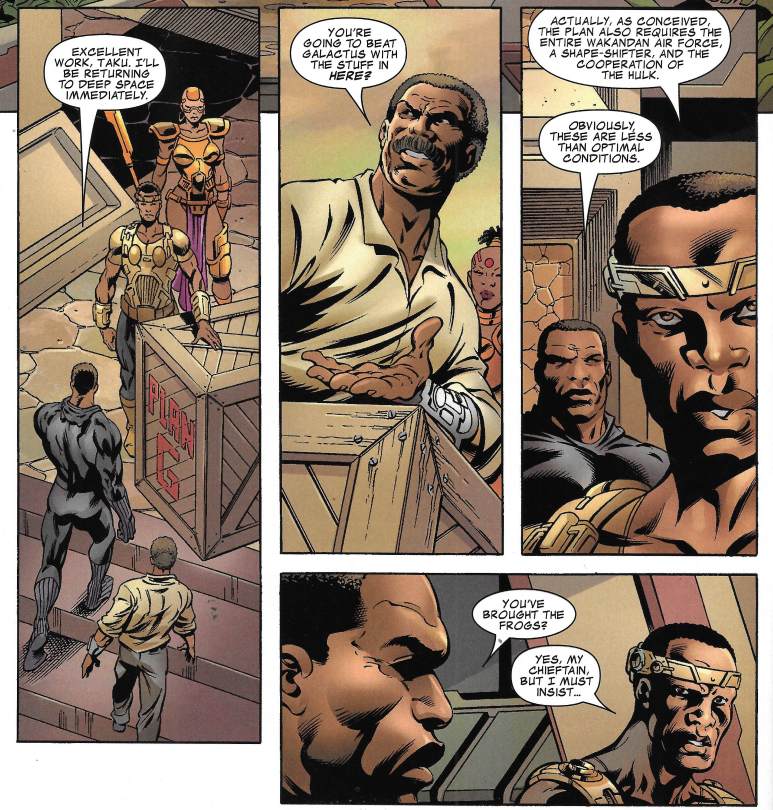 …wait! The Frogs!!!? If it’s Black Panther and frogs are mentioned, those would have to be King Solomon’s Frogs and now I KNOW we are in crazy town. Those were the starting point of Kirby’s comeback from DC and Panther’s first solo title. Also that was a nutty time for the character, so McDuffie using them…keeping them in continuity…is and odd, odd thing.

But odd as they may be, here is T’Challa’s contingency for getting back instantaneously. 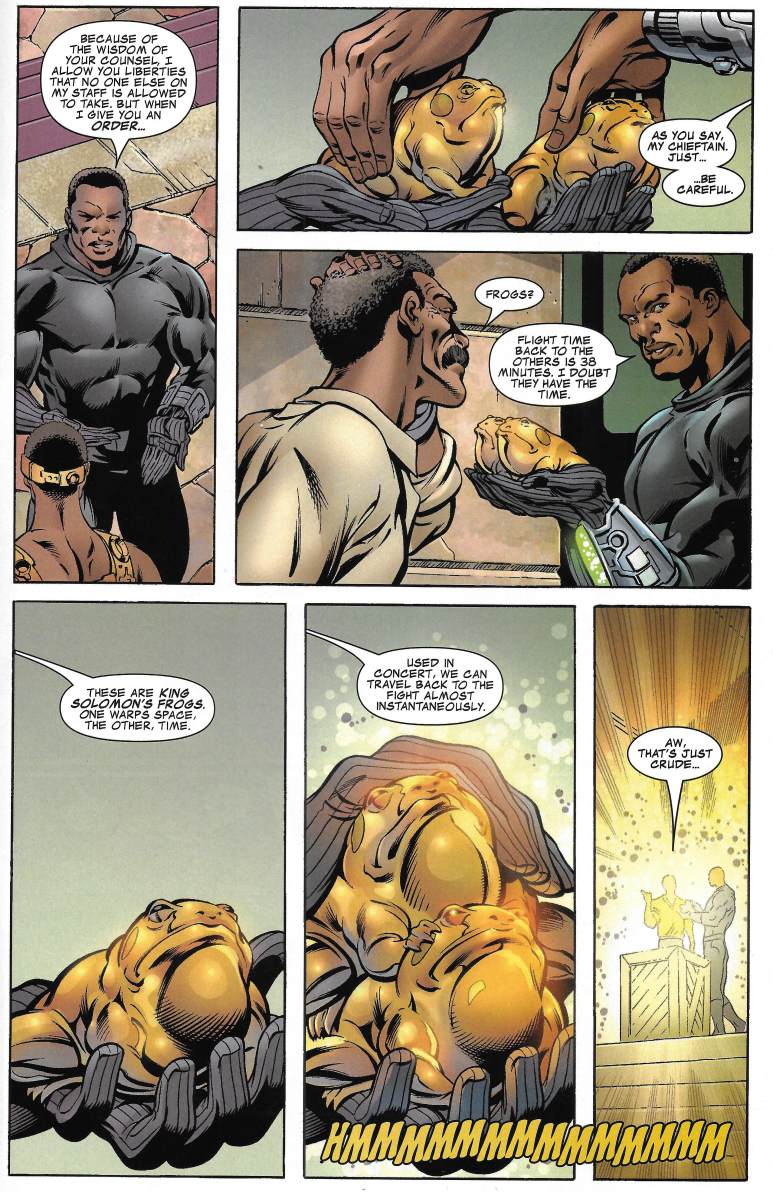 And yeah, that is kinda…eww!

But putting us back in the thick of battle by any means is a good thing. Just look at this cool boom-boom! “Protect the frogs with your life.” Bet Michael misses some of that Deathlok stuff now. Because it’s hard to be put on frog protection duty while other people get to…well, you know.

T’Challa tells Storm to have the others tackle Stardust as he takes Surfer on in something that looks a bit like suicide,… 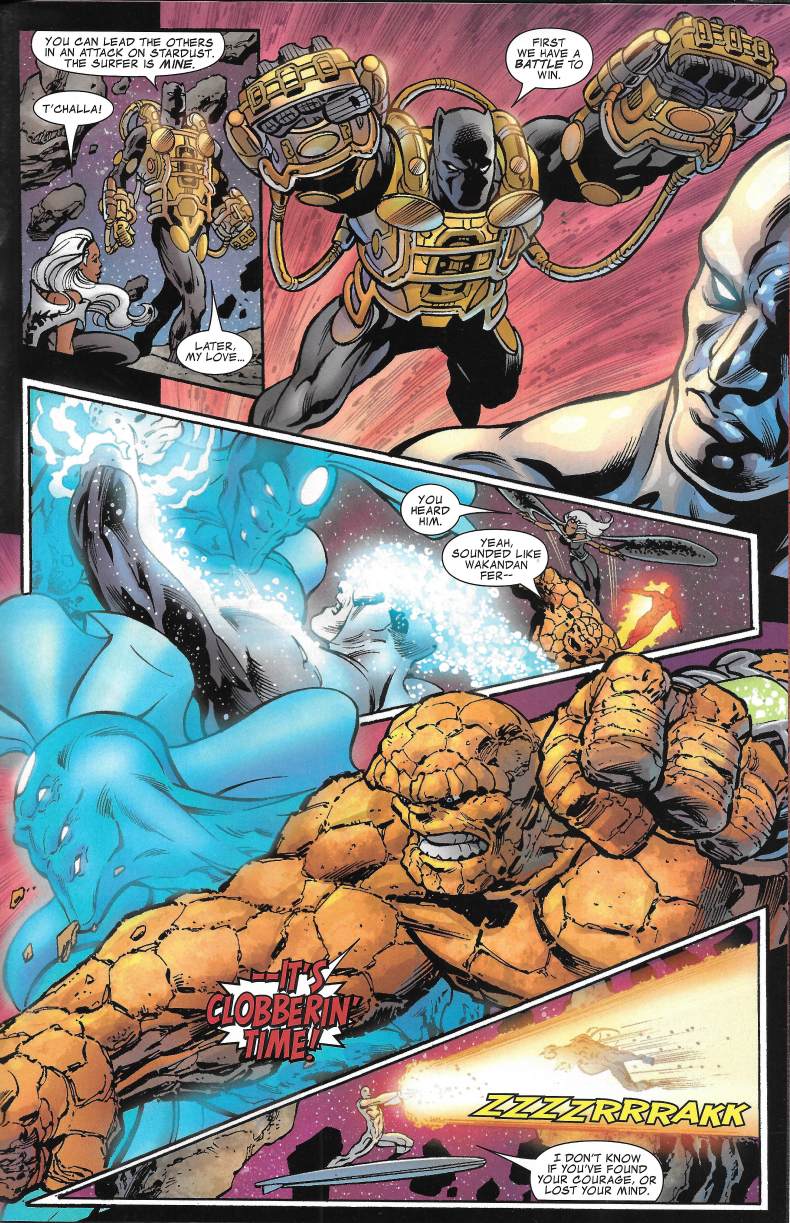 … but as Ben hollers out his trademark, we see… 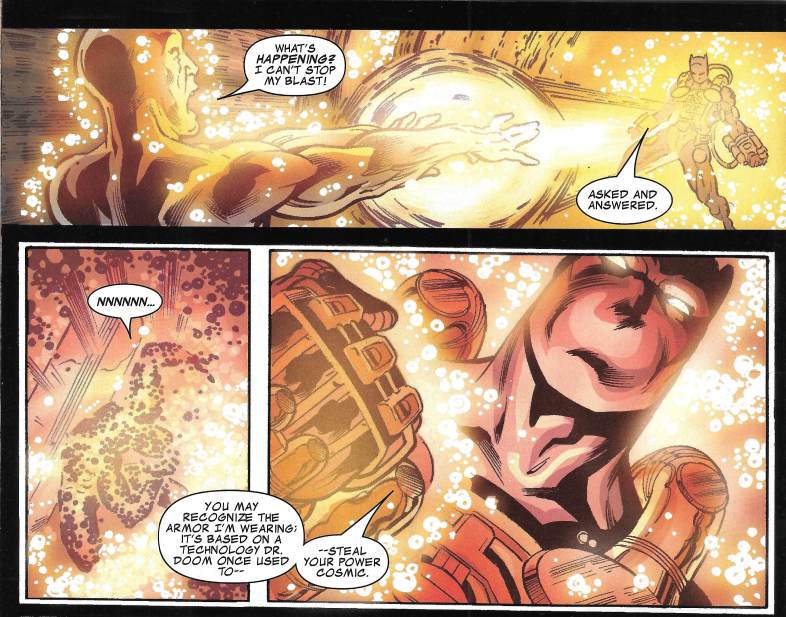 …that the Panther has used Doom’s old technology to knock Surfer down to plain-old Norrin Radd in silver facepaint. And while it would be fun to play around with all that energy, T’Challa follows the plan and hands it over to the team’s fire projector Johnny… 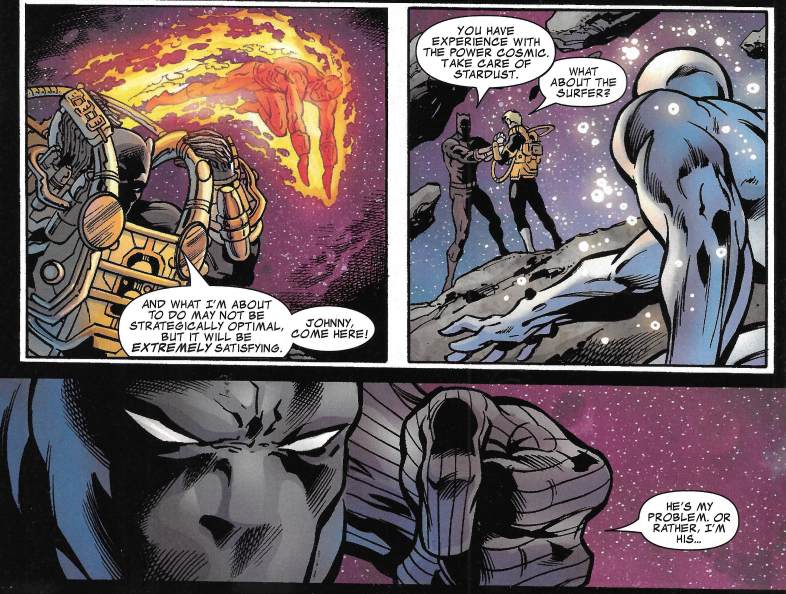 …and looks to make Surfer feel the pain like only the Panther can bring. 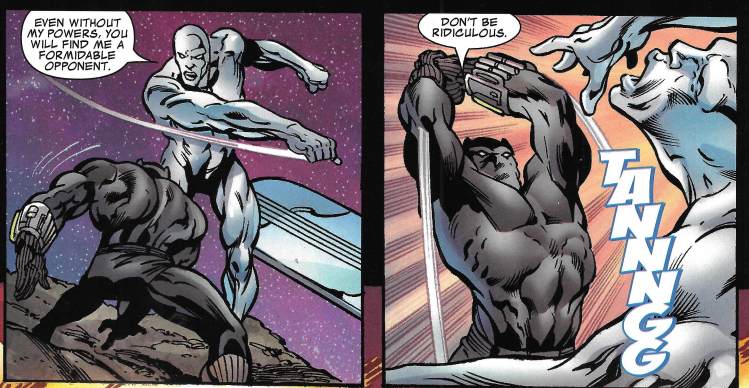 Yeah, Norrin should sit the rest of this one out.

And Johnny and Gravity take down Stardust without breaking a sweat. 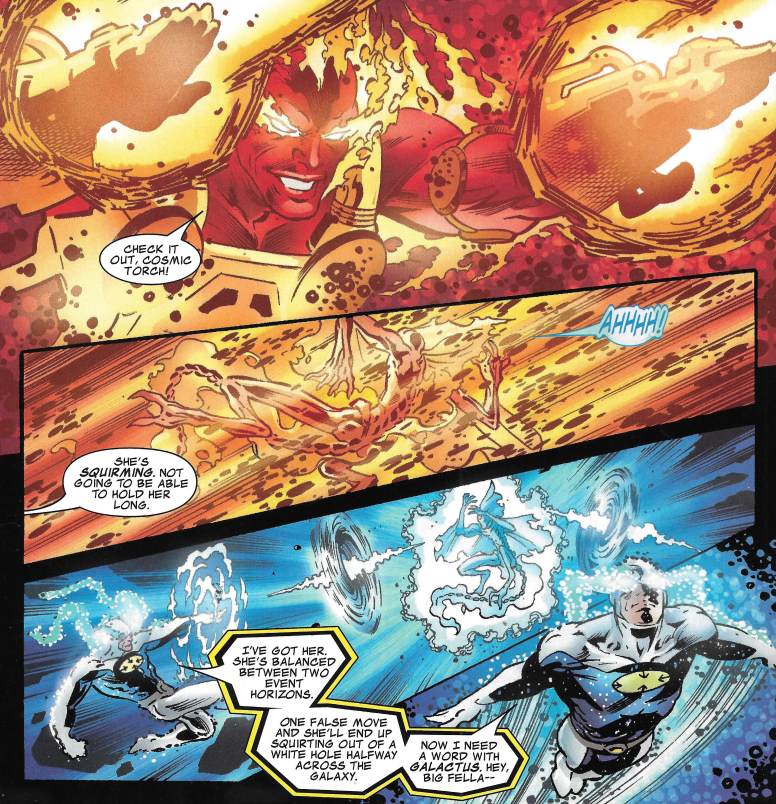 Which still leaves the G-Man, who is plenty enough for ten times the heroes you see here, so I’m cautious about Epoch’s chances of survival. 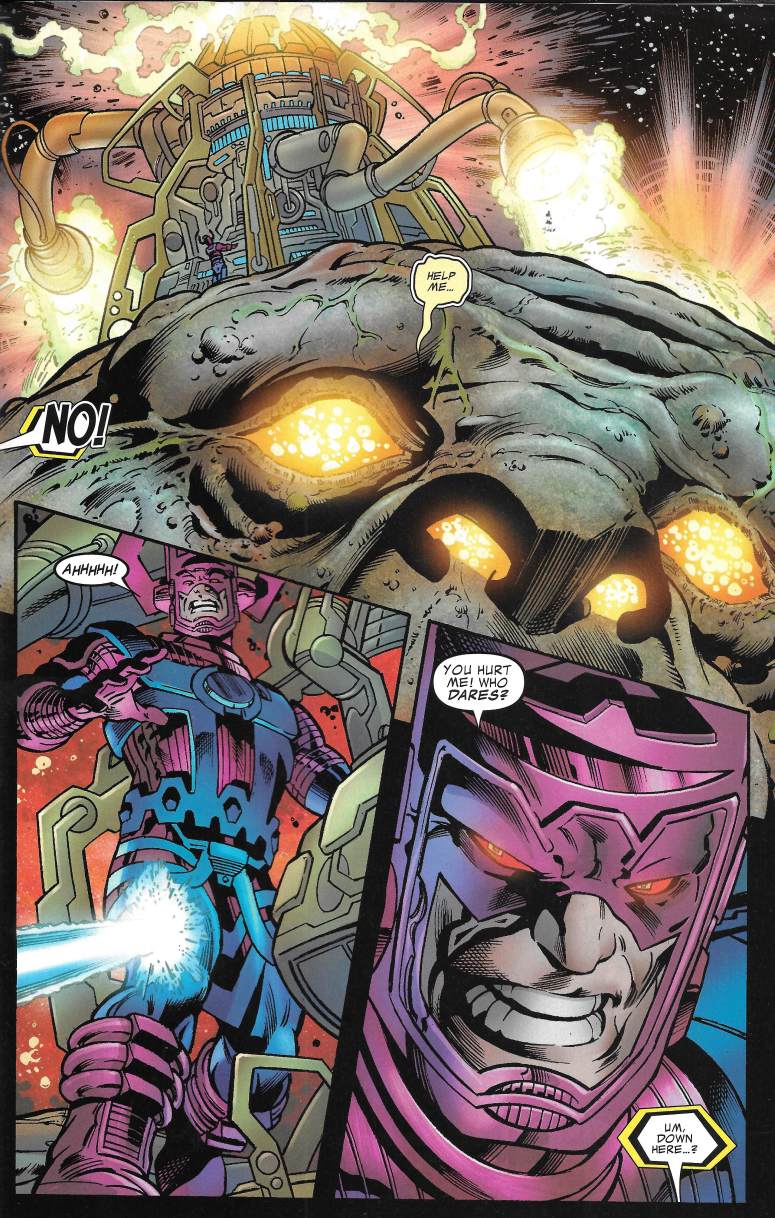 However, Gravity surprises me. Cosmically powered, he has enough strength to gain Galactus’s attention.

But even all juiced to the max, Greg is still a hero in the old school mode. Which means when he pours on the power… 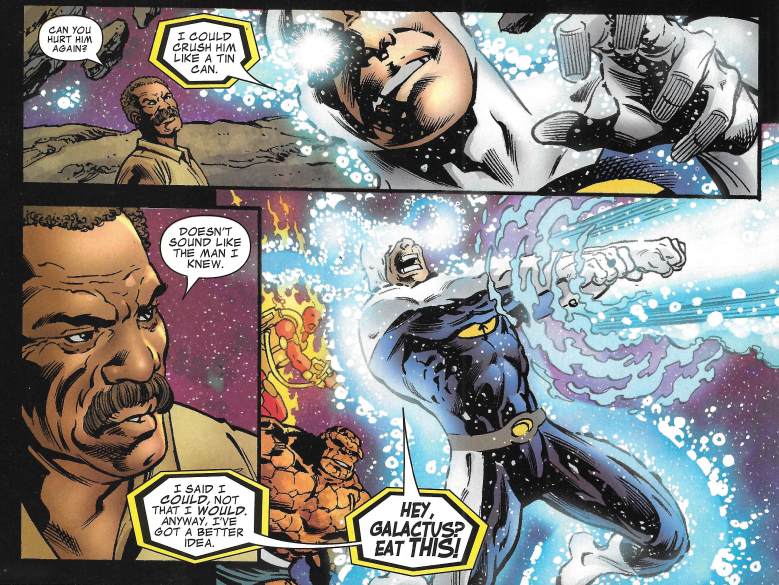 …he does it in a way that feeds the Big G, not kill him off. Wow, what a satisfying end to all this. The art, the story all of it. I’m calling it a bit early too, but what else is going to happen but… 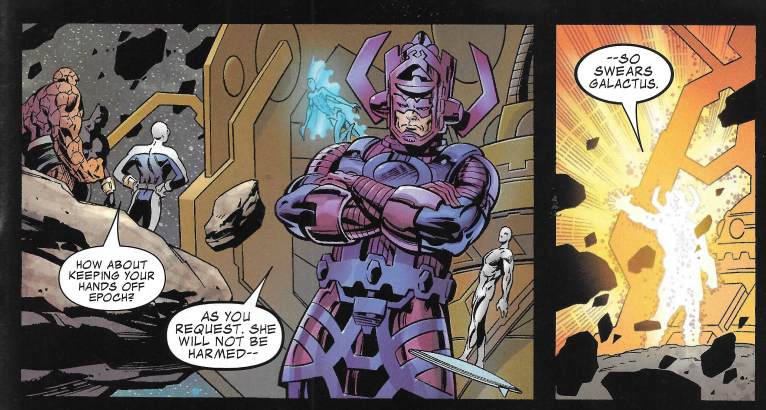 …Galactus goes on an Epoch-free diet. And Greg decides to NOT take on the mantle of Protector of the Universe. 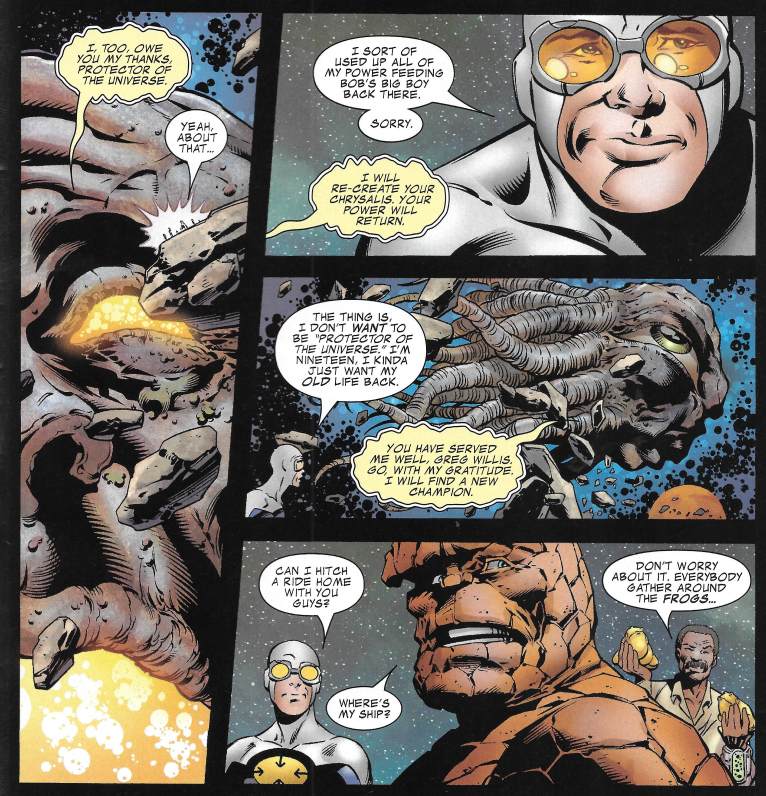 And everyone “hops” back to Earth. As Gravity departs, we get a few chuckles in and we are done with this first adventure of the new team. 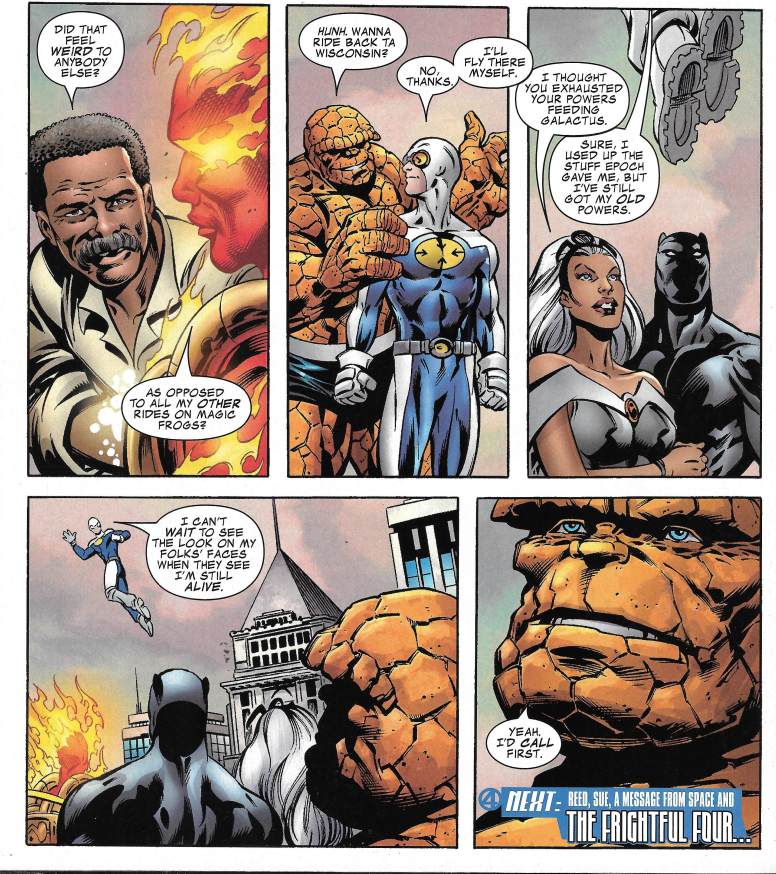 I’m sold! These changes are always temporary. Status quo always creeps back in. That’s how we know that there will be a Marvel FF book back again sometime, hopefully soon. While they last, though, there are opportunities for guys like McDuffie to have fun with it and tell good stories.

Looks like I’ll have to comb the bins for the next arc to see where he takes them next. And I’m glad that the Panther will be along to head up this ride.
Posted by SonOfCthulhu at 10:17 AM