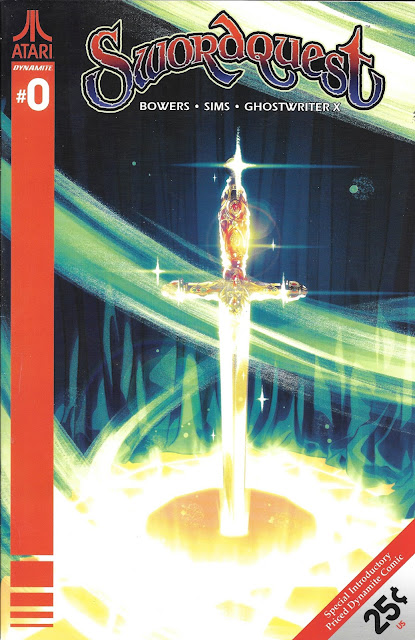 The first large-scale recession in the video game industry lasted two years. Market saturation was blamed as the cause. Revenue peaked out in 1983 at $3.2 billion dollars, which I don’t even want to think about in present value, then two years later had dipped down to a paltry $100 million. It bankrupted more than one company in the home computer/video game console market.

Analysist point to the number of systems available, citing that with so many consoles on the market, splitting the customers into smaller and smaller segments meant that there would be very few breakaway hits. And the cost of bringing the cartridges to market on so many systems were ever increasing. Retailers were allocating too much floor space for systems and as a whole the industry faced ever increasing competition from a growing home computer market with a falling price point.

Computers could do more than play games, too.

1982 saw a flood of cartridges hit the market from independent third-party software companies. When these didn’t sell, they were returned for credit to manufacturers who had neither the capital nor new product to replace them with. Prices on the consumer end dropped dramatically as stores with excess stock slashed prices and cut their losses. That business would never come back, with stores vastly reducing store shelves for games or leaving the market entirely. By mid-year 1983 the games produced became crappy low-budget affairs that felt quickly produced and rushed to market.

Atari had been dealt a fatal wound and would limp along 1984. It never even saw the unit that would supplant the popularity found by the Atari 2600, Nintendo’s Nintendo Entertainment System (NES) that brought about 1985’s market resurgence. 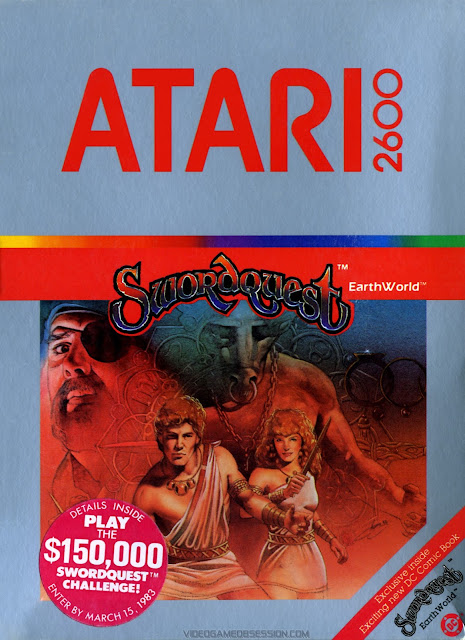 However, in 1982 things still looked great for the console gaming future. And Atari had a license to print money with the exclusive gaming rights it had to popular arcade titles / movie tie-ins being secured. Not to mention the large base of installed Atari 2600s. 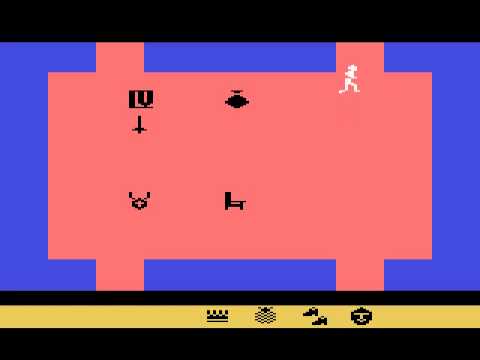 The trick was finding ways to sell titles that didn’t have an automatic legion of fans. But Atari had a grand scheme that they hoped would net them a best seller. All they had to do was hold a little contest. 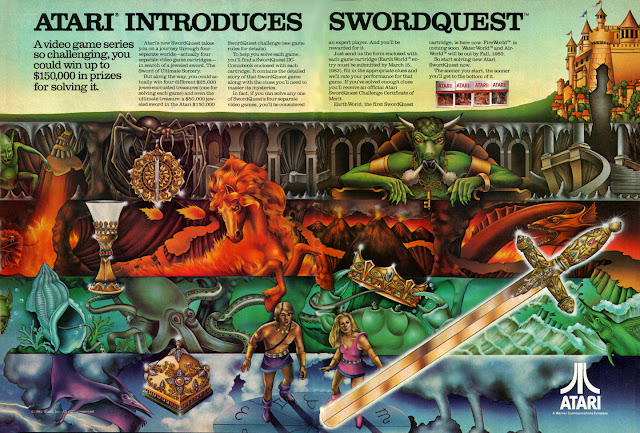 Well, not so little as it turned out. The contest was for an estimated $150,000 in prizes, doled out one at a time over a series of four games with each winner receiving an object worth $25,000. And these objects sounded incredibly choice, being gold and platinum chalices, crowns, and talismans covered in jewels. The winners of these four games would have a chance to win a fourth prize, a jewel-encrusted sword worth $50,000. 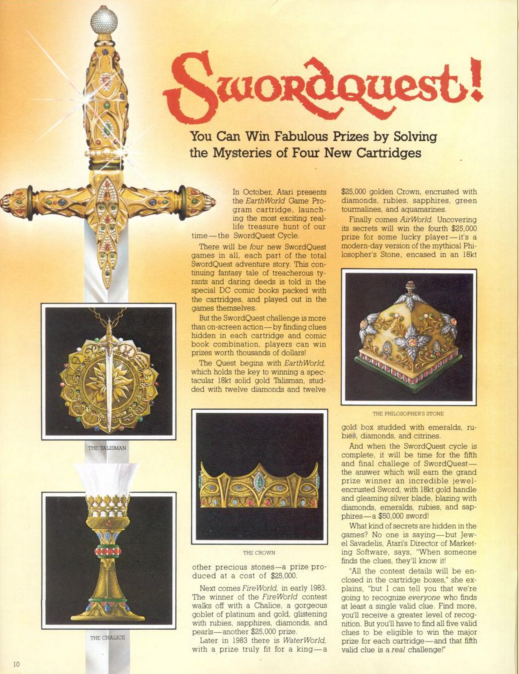 The book tells the story far better than I could, so I’m going to defer to the background page found inside. 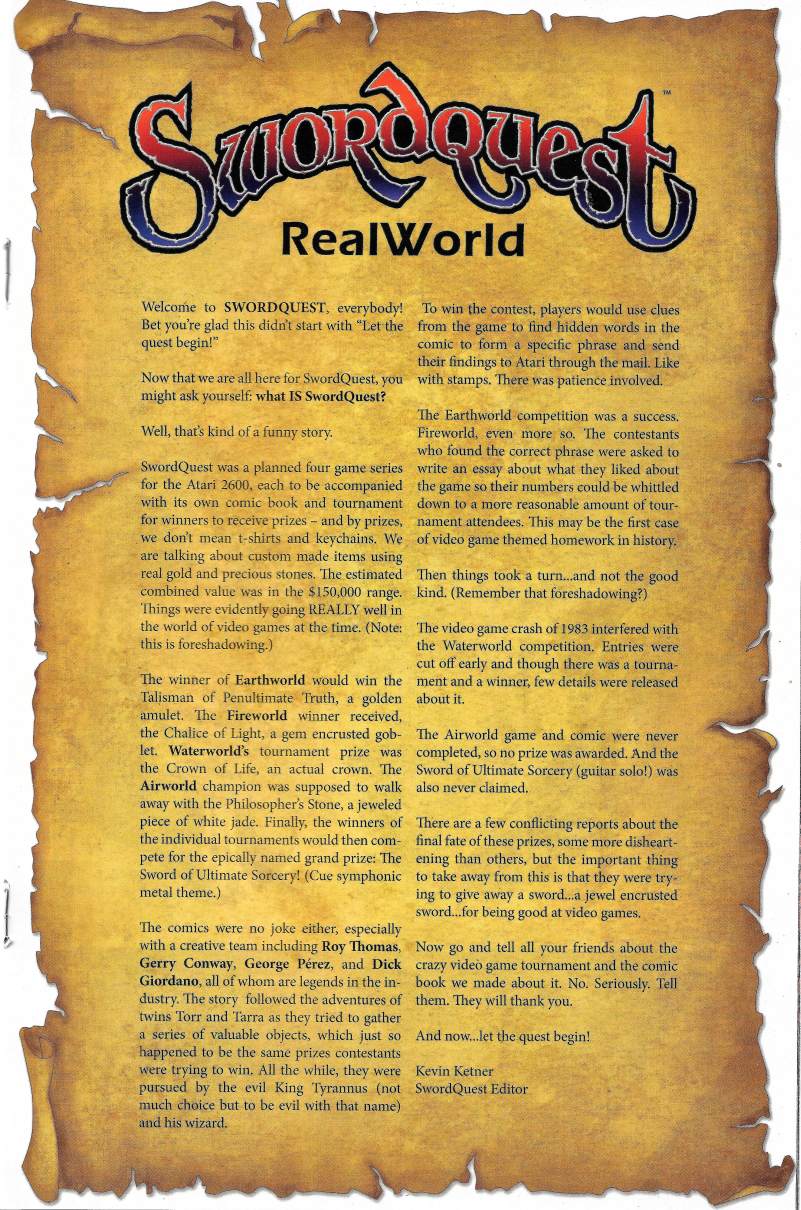 Pretty amazing tale. We have comics and videogames providing the clues to a contest where you could win actual blinged-out fantasy treasure. Sounds amazing. As you already know, I didn’t have an Atari 2600, but if it did I would have most certainly entered the contest. And those comics are available online HERE and with talents like Roy Thomas and Gerry Conway on writing, George Perez on pencils, and Dick Giordano on inks, checking them out should be a no brainer.

But this review isn’t about those books, as tempting as that might be. This review is about Dynamite publishing’s new SwordQuest limited series, which is about…well, that would be telling wouldn’t it.

We begin in the real world, our world, and before you start in thinking the art is crude/cludgy compared to Perez/Giordano and whatnot, just check that thought for a bit. The art fits the story and this isn’t a SwordQuest story. Yet also it IS a SwordQuest story. 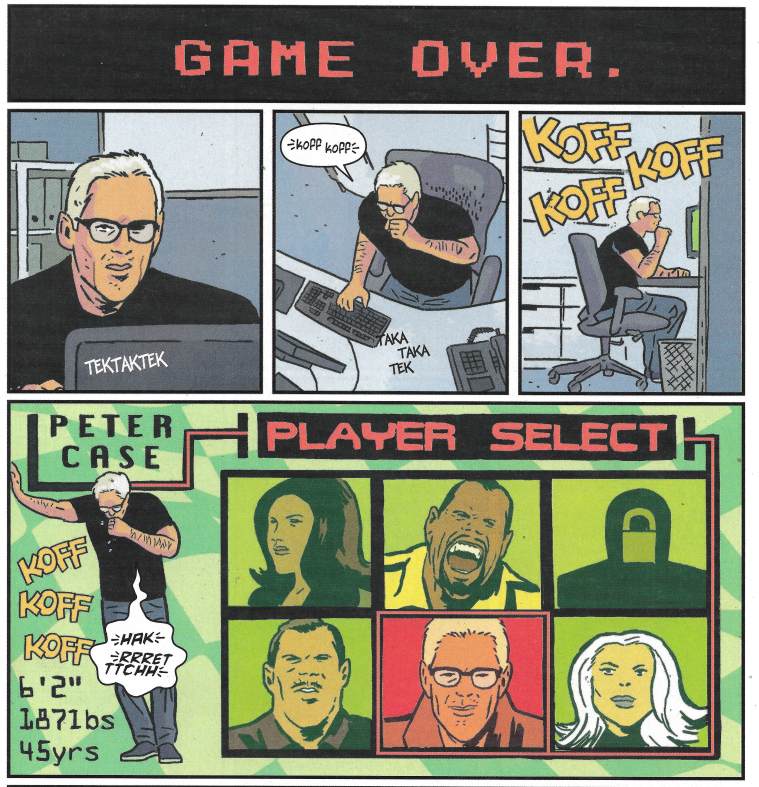 We open with Peter Case, working late when an annoying coughing fit drives him from his desk and into the company restroom. 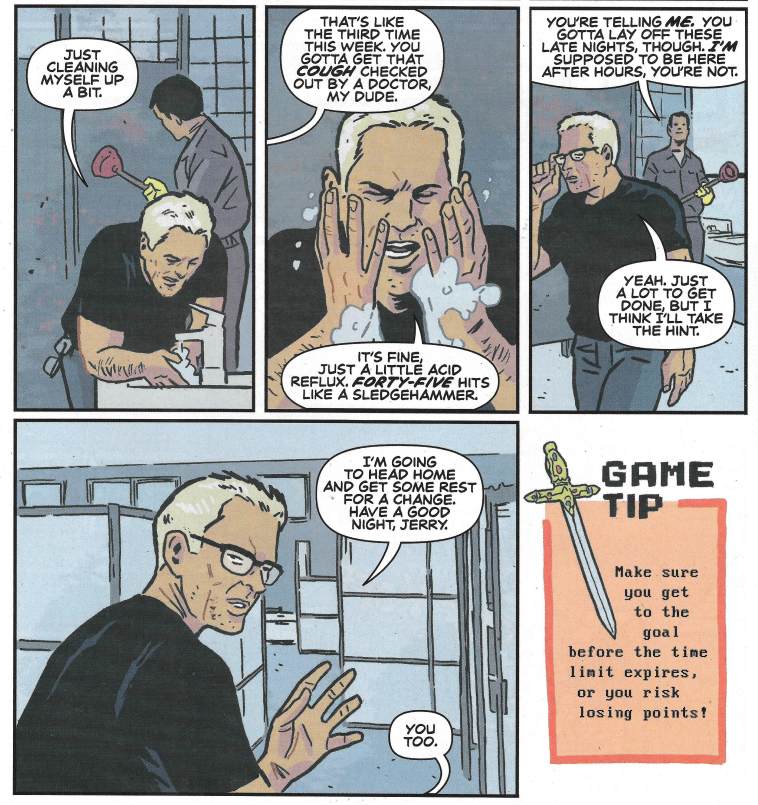 While yacking his guts out, he runs into Jerry the night janitor. From the conversation that follows, it appears Peter’s visits to pray before the porcelain god are a bit more regular than is healthy. Jerry is concerned. Peter shrugs it off as acid reflux and leaves work.

Note that game tip. It’s almost like the book is telling us something, right?

Peter’s hard night isn’t over, however. He arrives home to find his apartment building on fire and a neighbor frantic about her…bagel. 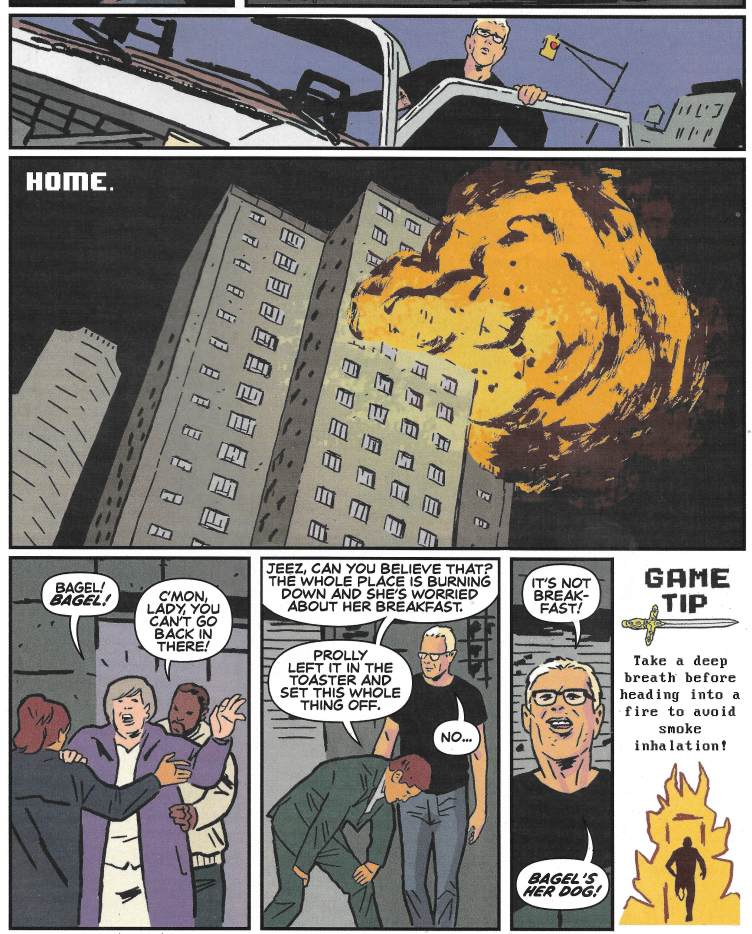 Peter’s our hero, so it is only natural that he rushes into the blaze to save his neighbor’s dog. Pity of that is that it appears he loses all of his hearts in doing so. Man could really use some ceramic pottery laying around to break if you ask me. 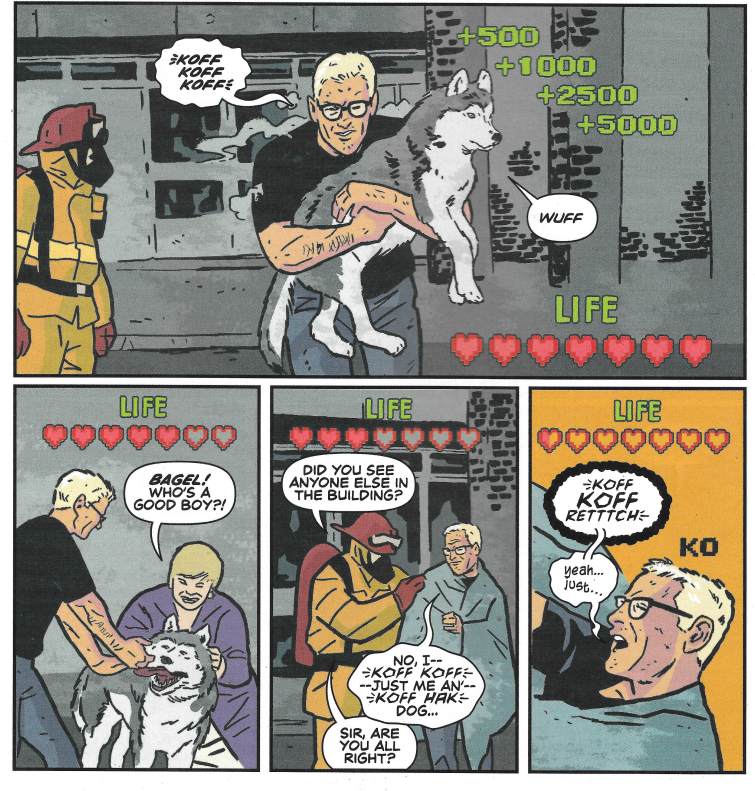 And his life only gets more complicated as he reaches the hospital, where more dire news awaits. 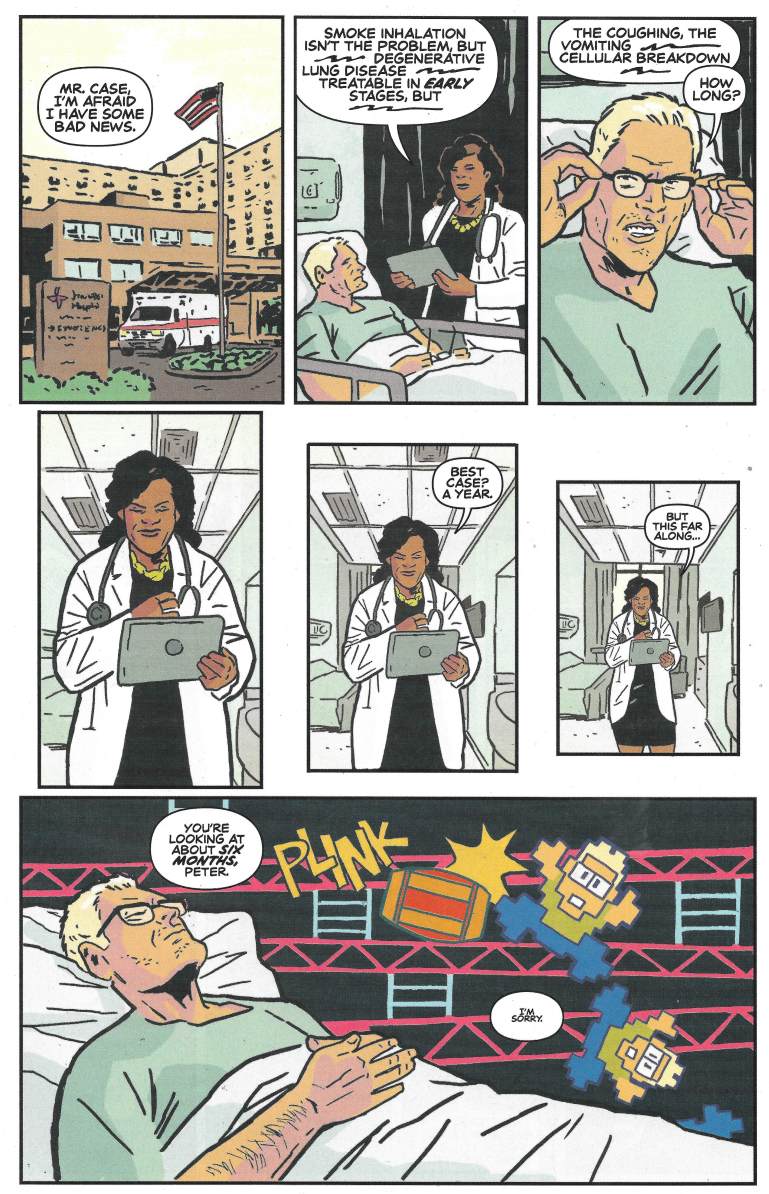 Peter is dying. And now this man with no possessions except his car and the clothes on his back has six months to live. I can’t think of a more soul crushing start to a book since Blood + Water, maybe.

He buys essentials and falls back on his Mother’s shelter. He doesn’t tell her about the doctor’s prognoses. She doesn’t know he’s dying. 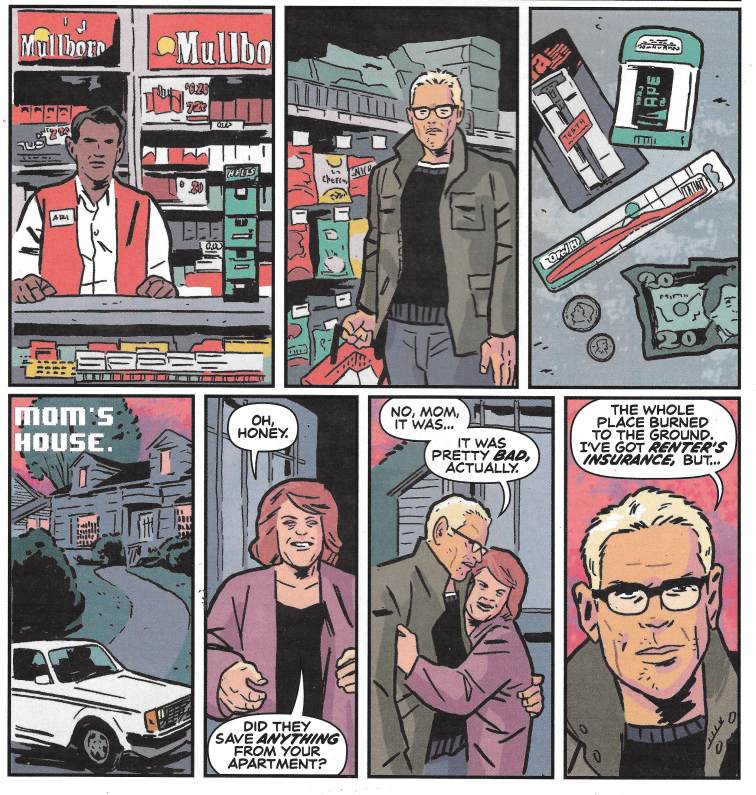 She gives Peter back his old room, which has gone through some changes… 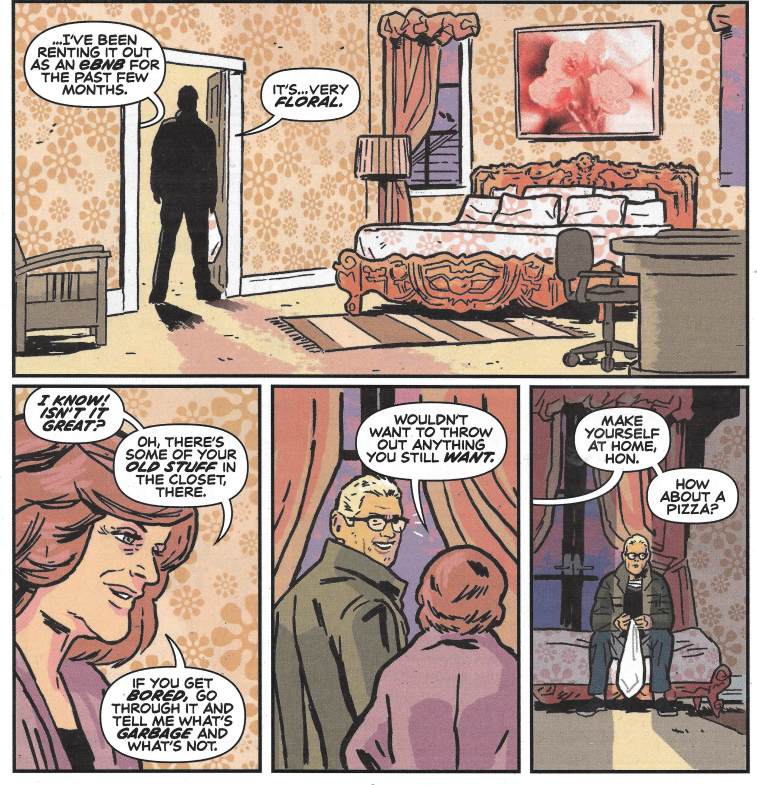 Peter checks his twitter feed and sees two old friend’s posts. Amy Perez has just gotten engaged. Alvin, her brother, wishes her well. There’s something that has happened between Peter and Alvin. Whatever it is, it prevents him from sending a friend request. 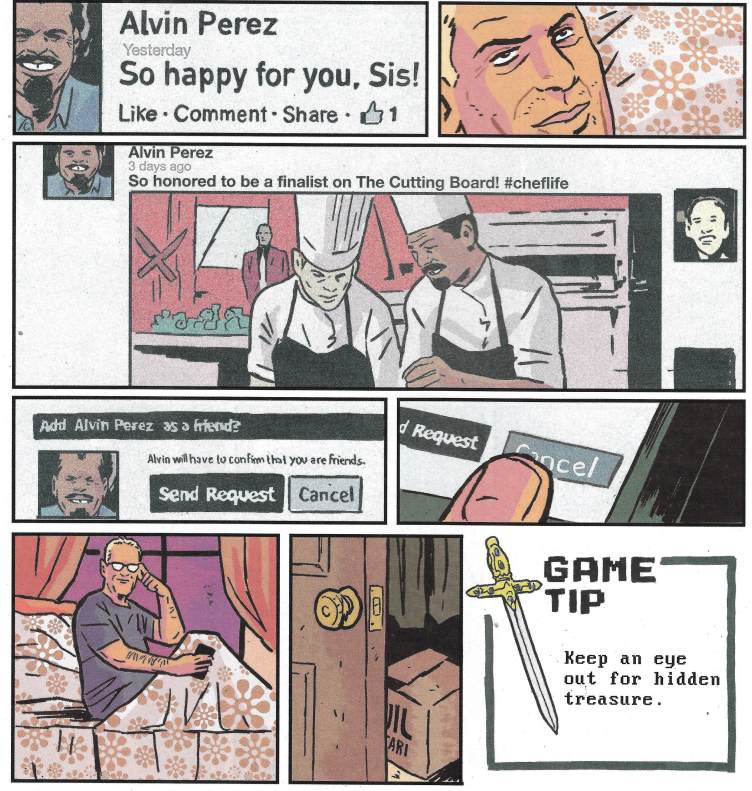 And the something special peeks out of the open closet door… 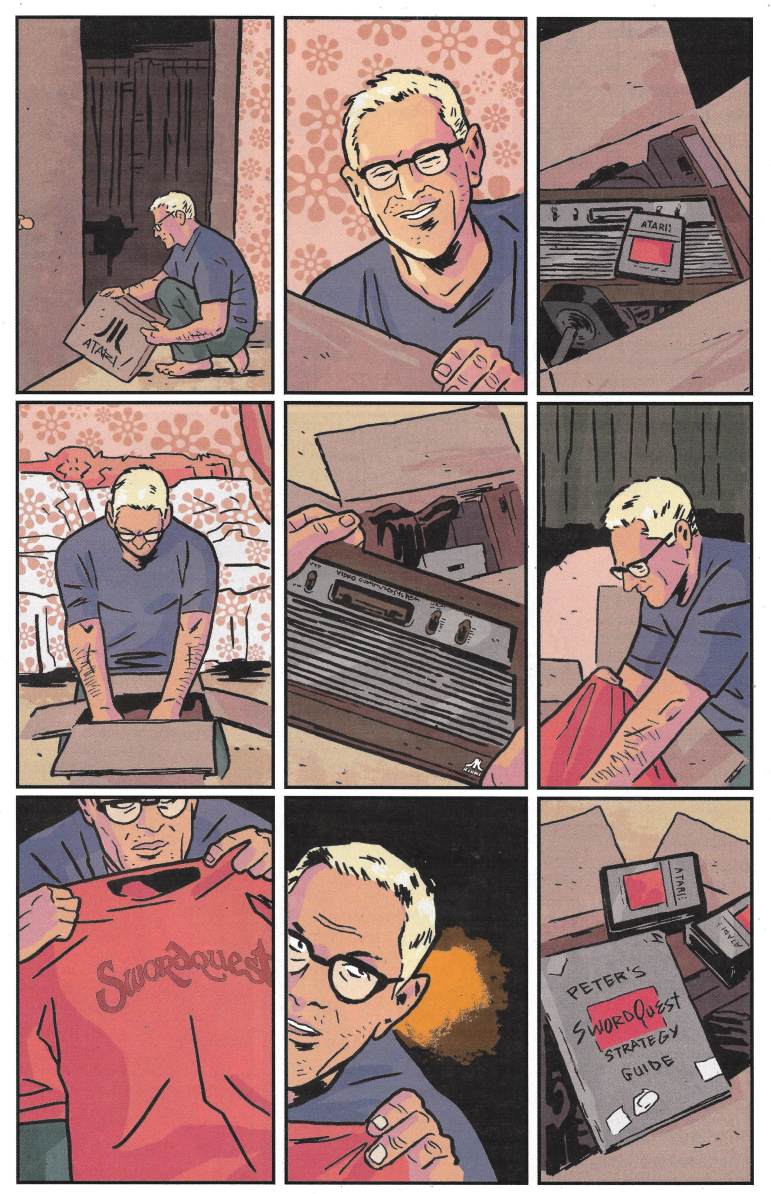 A moment that anyone of an age beyond youth can identify with, a moment of overwhelming nostalgia, a flood of memories, and a hint of the feeling of that time, while moving forward always leaves ripples that sometimes come back to you. A feeling of endless possibilities. A feeling of hope. 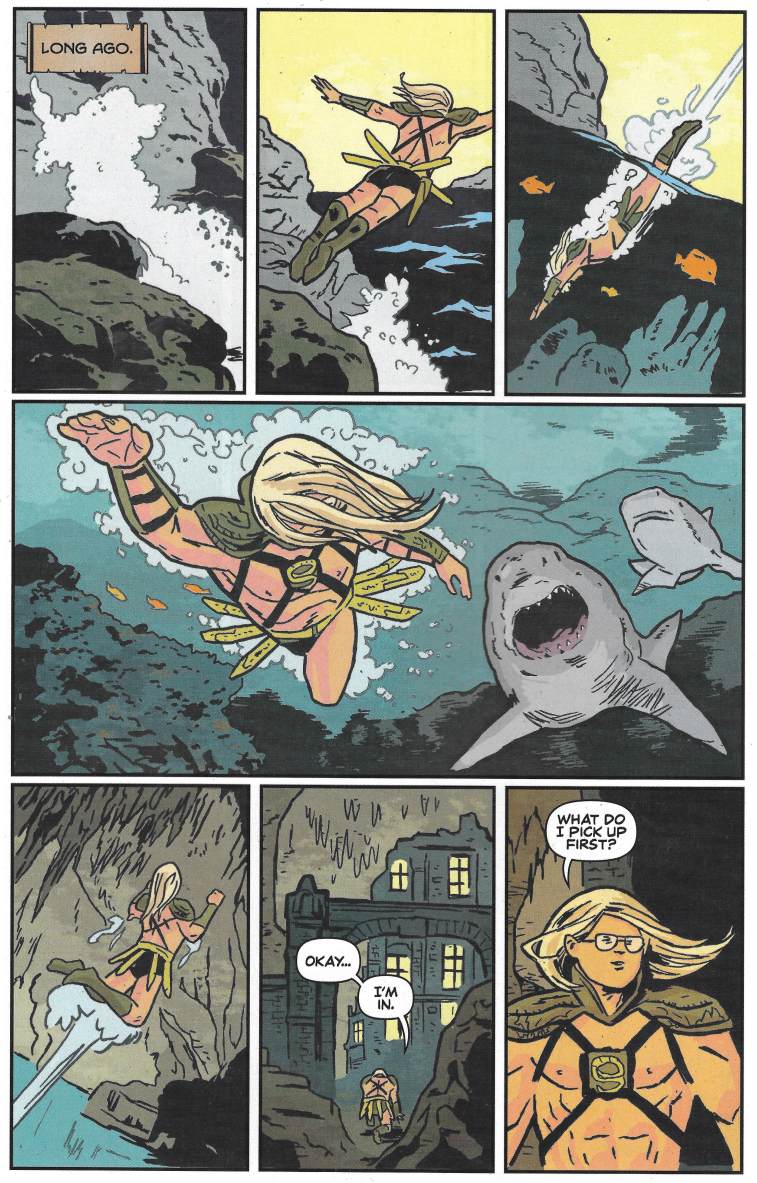 It reminds you of a time long ago when you were the hero in a grand adventure. Even if it was only on the screen of a television. 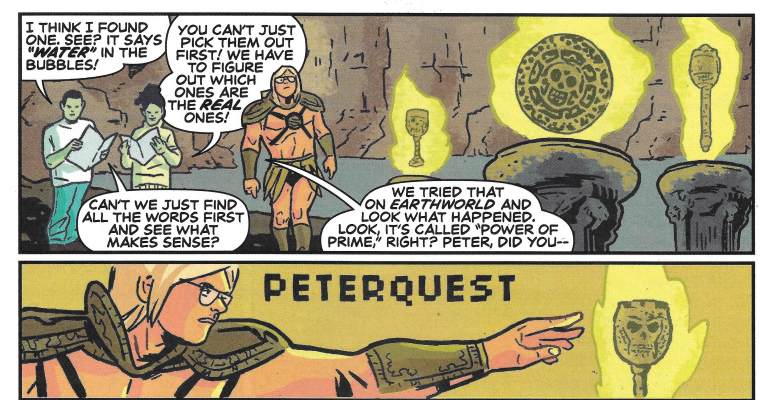 And your friends worked as your companions to solve a magical quest. Mostly, that is. 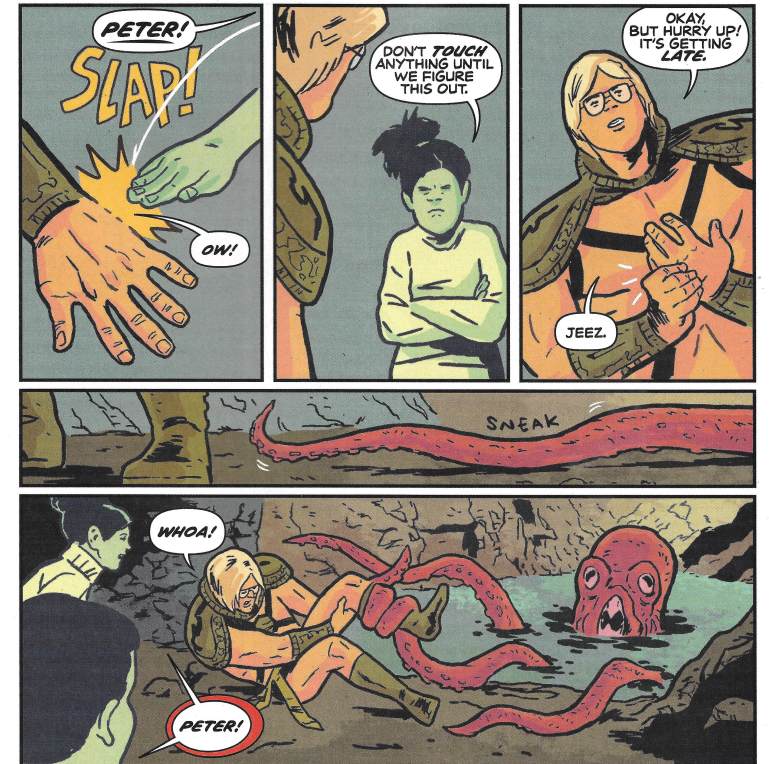 A moment when you could come together as one instead of arguing and fighting. Because fighting and arguing got you killed. 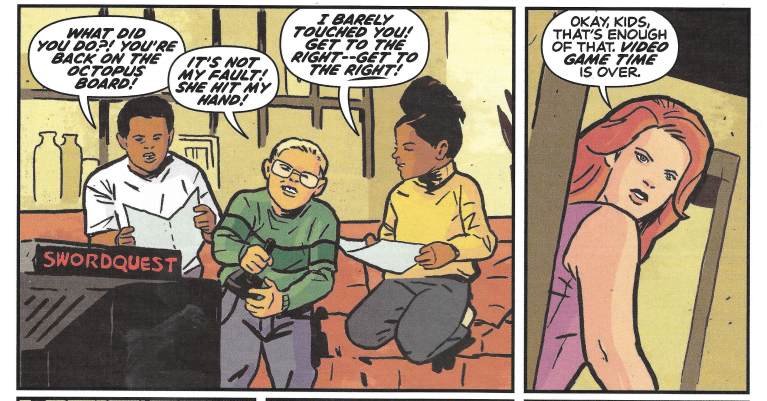 We are in a flashback to Peter’s past and here are junior Alvin and Amy all sort of working as one to complete SwordQuest: Fireworld. But being young kids means that they sometimes get on each other’s nerves. 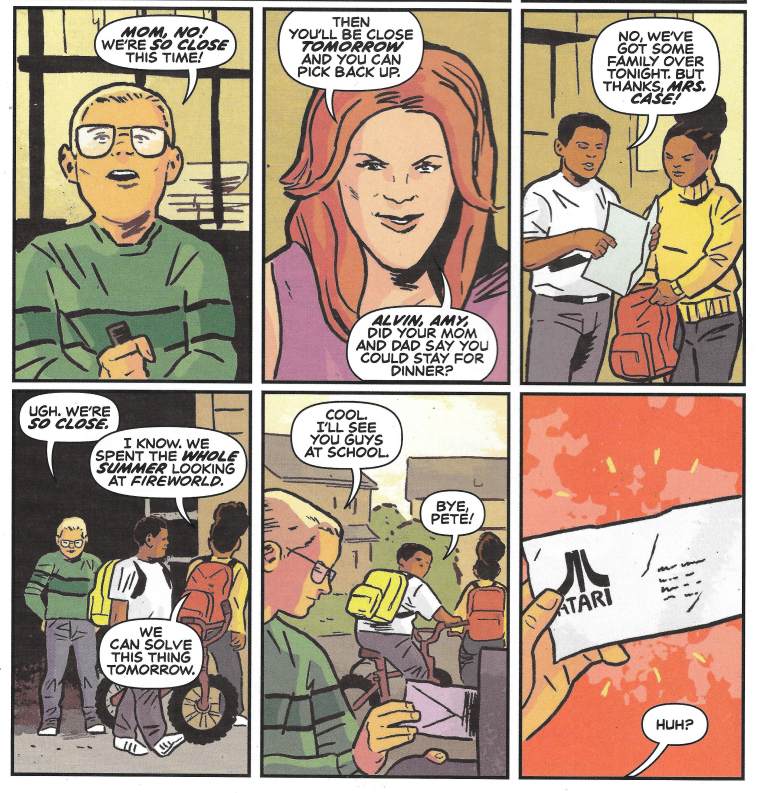 But that doesn’t mean you don’t want to stop being friends. It is indeed a simpler, less complicated time where hope and optimism of a better tomorrow are a given. A present where you are constantly handed surprises. 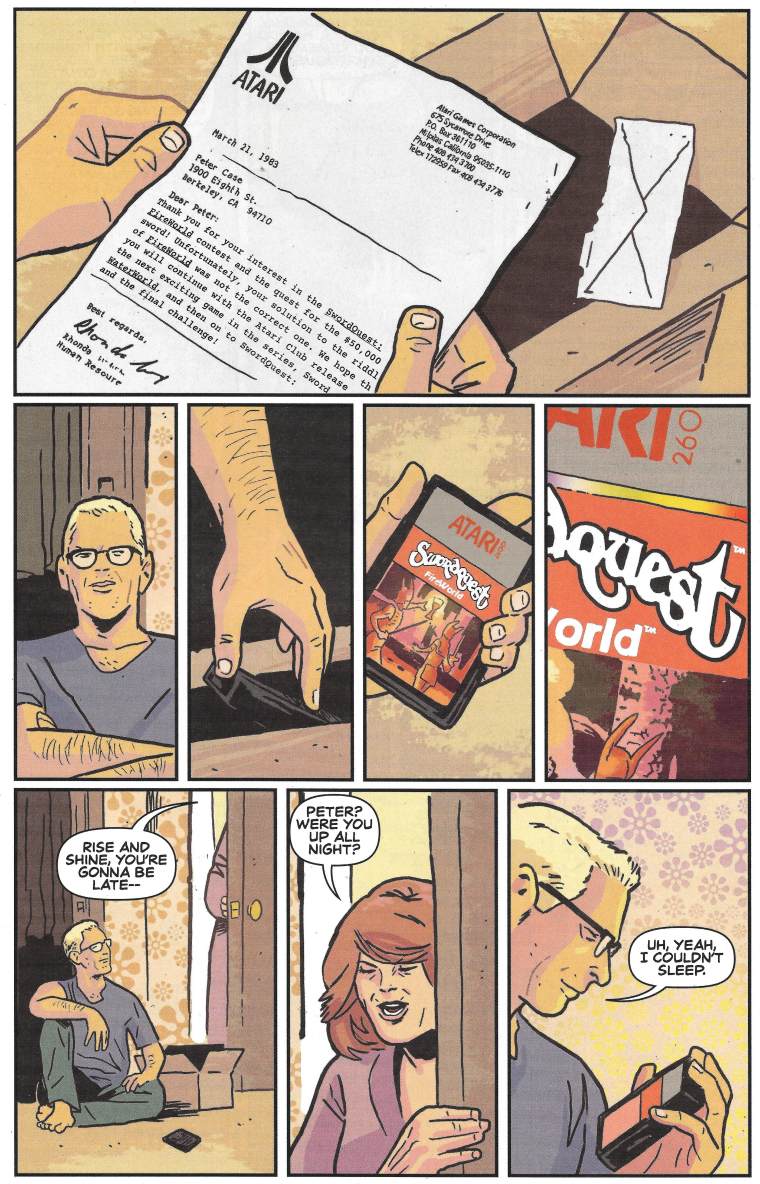 And where a setback isn’t the end of your world.

There is so much subtext in this book and I know that many stories start off with a grand beginning that they can never live up to, but SwordQuest has gotten under my skin. I have hopes for it. As much hope as Peter had as a child for winning that contest. Even if those hopes didn’t go exactly as planned. 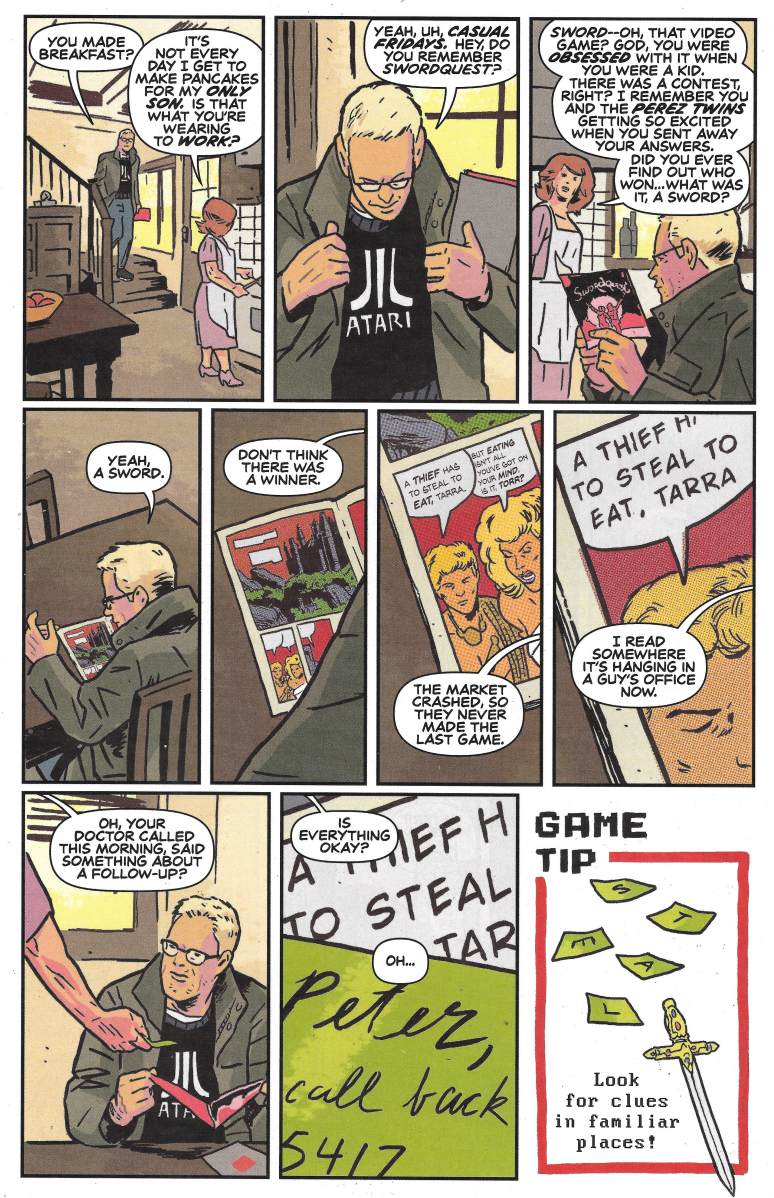 Because sometimes your quest can lead you to paths where it looks like your journey is at a final, fateful end. But that isn’t the case. It just means you may find options open to you that never would have occurred to you if you weren’t in desperate straits. 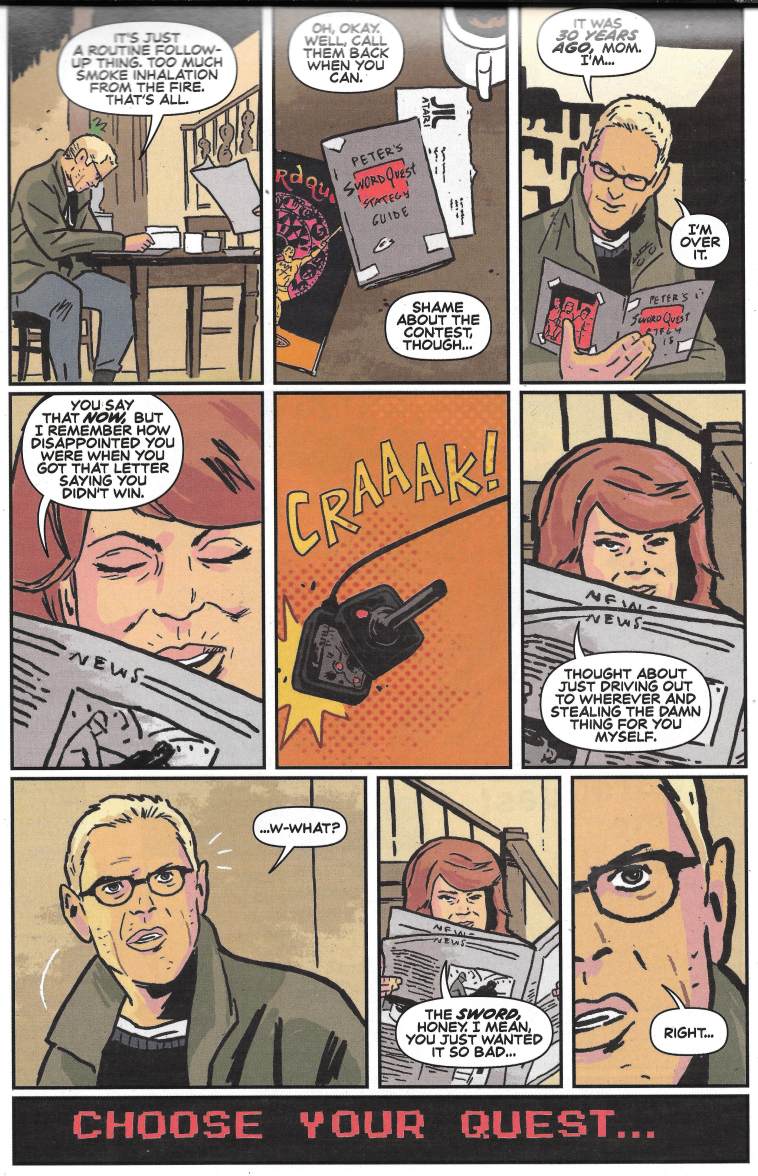 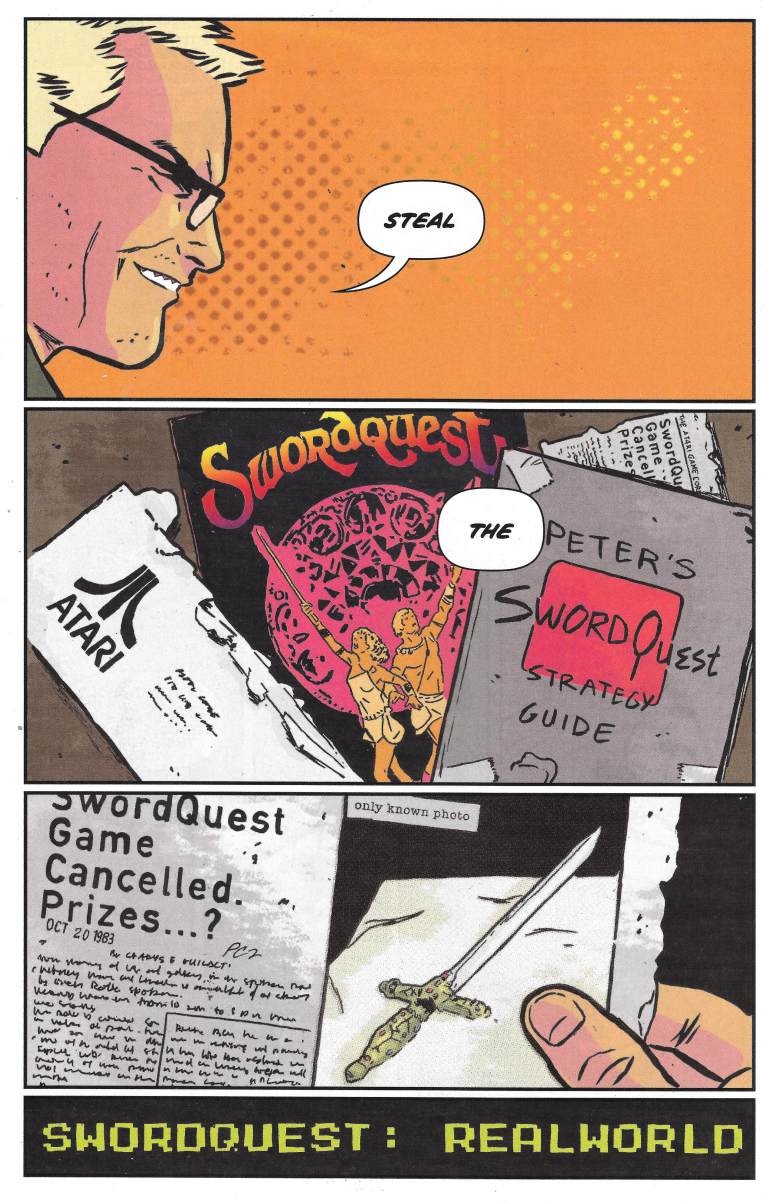 Mixing doses of nostalgia with the sobering truths that us older folks confront every day about what we have done with our lives, SwordQuest spins a tale that works for me. It has the right parts of tragedy and optimism to make me hope it is traded somewhere. I want to see if Peter reunites with his friends, conquers the trials ahead of them as a team and if he wins that sword, a symbol of living a life with a meaning.

The book hooked me. Dynamite sold for a quarter and I would have paid full price for it. Even though it is short, the book resonates with exactly the right pitch for us older fans.

I’ll do more that wish Peter a good quest, I think I’ll join him to see how it ends.
Posted by SonOfCthulhu at 7:20 AM