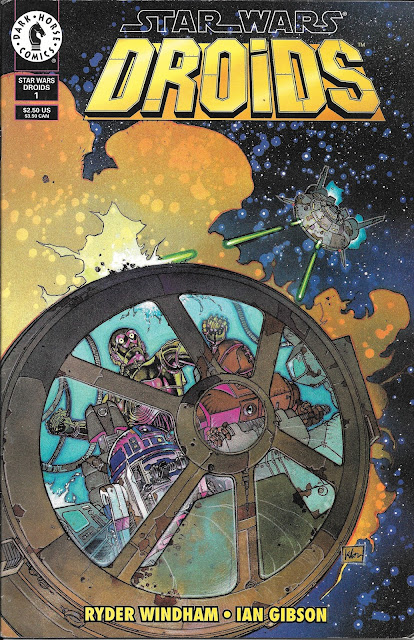 This book is a dream come true!

Everyone seems to forget that the original Star Wars had a “Jar Jar” in it.

His name was C-3PO, a British-accented protocol droid thrust into a galactic conflict. Throughout the first three movies he was shown to be cowardly, inept, a nervous worry-wart, and most of all annoying. 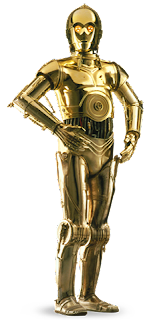 Certainly he was designed as the “straight man” to R2-D2’s funny guy. And Anthony Daniels hit exactly the right pitch with his effeminate, talkative vocal work, so it isn’t that he is not a well-rounded character. But he is so annoying that they can blow him apart with little real emotional impact. We worry about cute little Artoo, but if C-3PO gets his limbs and head lopped off, it works on a comedic level. When everyone is leaving Hoth and a door blocks C-3PO from following them, you giggle instead of feeling anxious for the character.

Because he’s so damn annoying.

That’s what it boils down to. And in its own way, that’s sort of grand. C-3PO could easily be seen as just another piece of furnishing. It would be simple for a less talented actor to turn him into something with all the emotional resonance of a walking toaster. The fact that he is so damn aggravating humanizes him, it gives us a clear gut instinct that there is more going on with him than we realize. He’s a person, not a machine. Except he’s an irritating person. 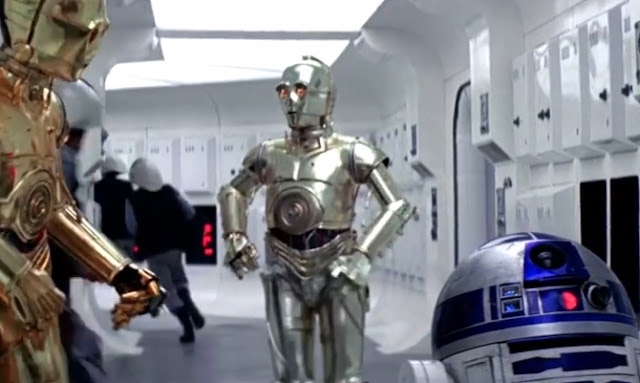 George Lucas once said in an interview that the focal point of the Star Wars universe was R2-D2 and C-3PO. That they were his protagonists throughout the stories he was creating, in the entire nine film “planned” epic they would be the only characters who were present in all of the films. That the this was really their story of how they had witnessed all these events that impacted the entire universe. This held up well in the first trilogy, but felt miserably grafted on to the Prequels.

Making Darth Vader responsible for C-3PO? What a bad decision.

As for J.J. Abrams Star Wars, he is using the characters, but they are more like cameos. Abrams has replaced the cute, smart, and spunky R2-D2 with a bowling ball robot that is also cute, smart, and spunky. As well as merchandisable. So much of the new JJ Abrams-Wars universe feels tacked on to sell new toys and BB-8 is at the head of that bunch. R2 could have played that part rolling backwards.

But diminished roles or not, the Star Wars Droids have something BB-8 can’t claim: their teamwork led to other opportunities. The pair did get an animated featureon Saturday morning cartoons that ran for thirteen episodes. The series was set between Revenge of the Sith and A New Hope and starred Daniels vocal talents.

And yes, that’s Stewart Copeland of the police singing the theme song.

This Dark Horse series follows along that same timeline, however there are bunches of zigs and zags to be navigated. First off this is the third Droids title, the first being a Marvel Star Comics title that ran bi-monthly for eight issues way back in 1986.

Dark Horse revived the series in 1994 of all years. The tales those six issues told were a continuation of Dark Horse Comics anthology Nos 17-19 that featured them. Whatever sales target that series had, it must have exceeded it because in 1995 we have this second volume from Dark Horse that would add another eight issues and two one-shot specials. Seems you can’t keep a good pair of droids down.

So let’s kick this puppy off as we find out droidnamic duo in hot pursuit of a criminal mastermind alongside a bounty hunter droid. Threepio is his usual anxious/annoying self here which means being frustrated at having to be in the thick of things as well as taking those frustrations out on Artoo. 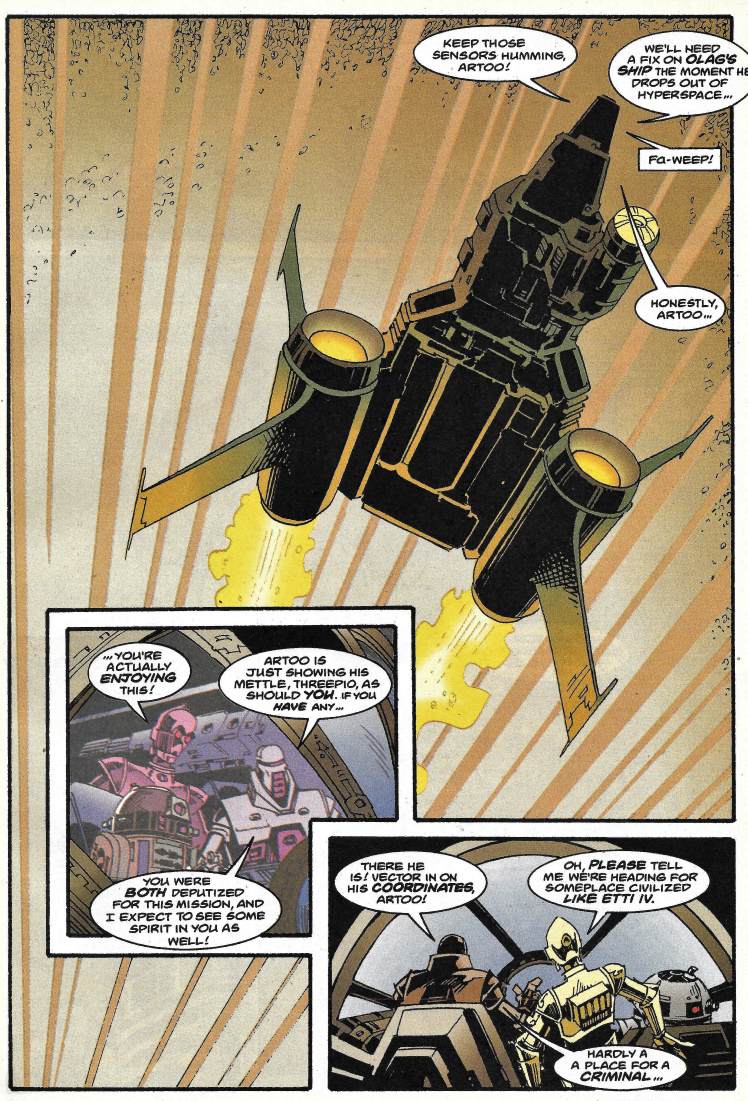 Our tough-guy droid is named Zed and he says that Artoo is just showing his mettle by being brave. And bravery is what they will need as they are headed into Nar Shaddaa in the Hutta territory, which sounds pretty rough. Sort of a Mos Eisley Cantina the size of a planet or something. 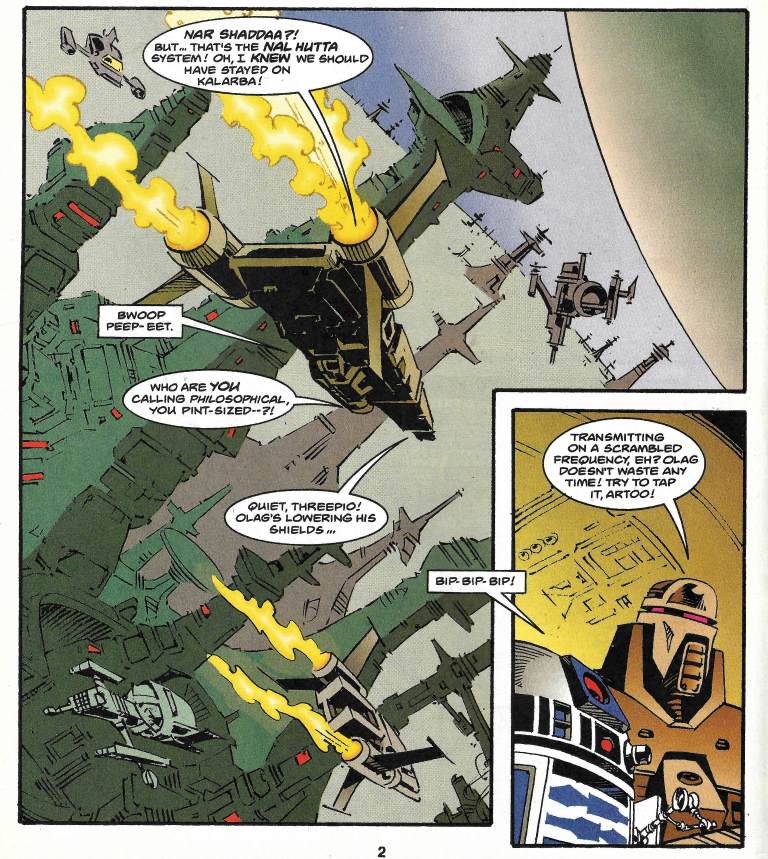 From there we shift to the pursued: Olag Greck and his Gamoran companion. He’s trying to reach a crime boss on the planet who can hide him named Movo Brattakin. It appears Olag has some dirt to use and it all stems from the word “Boonda.” We won’t find out what that word means, at least not this issue but it is clear that Olag is the type of person even fellow criminals don’t like. 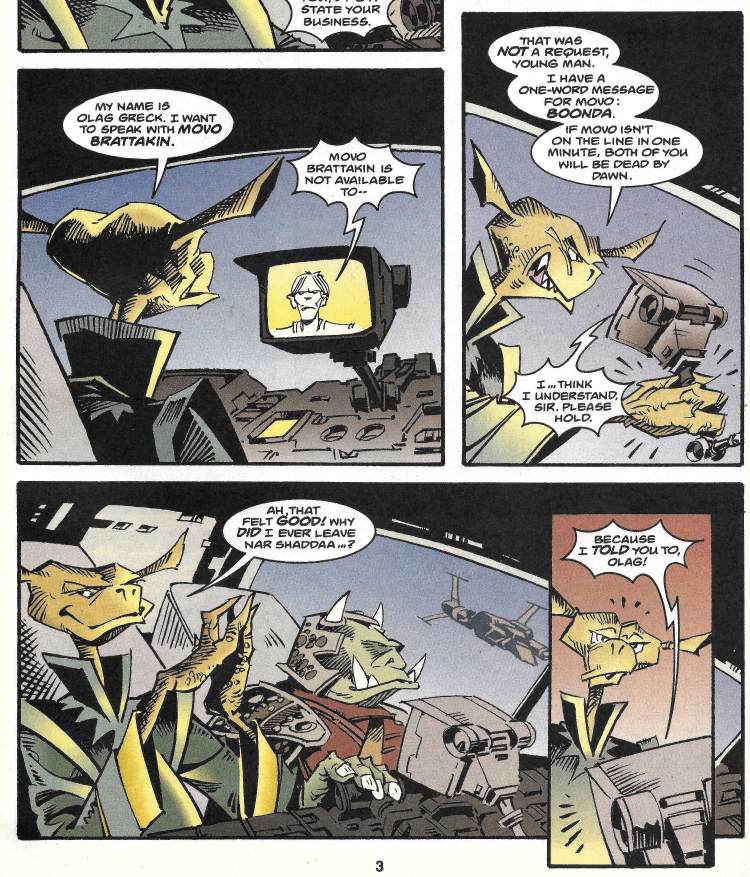 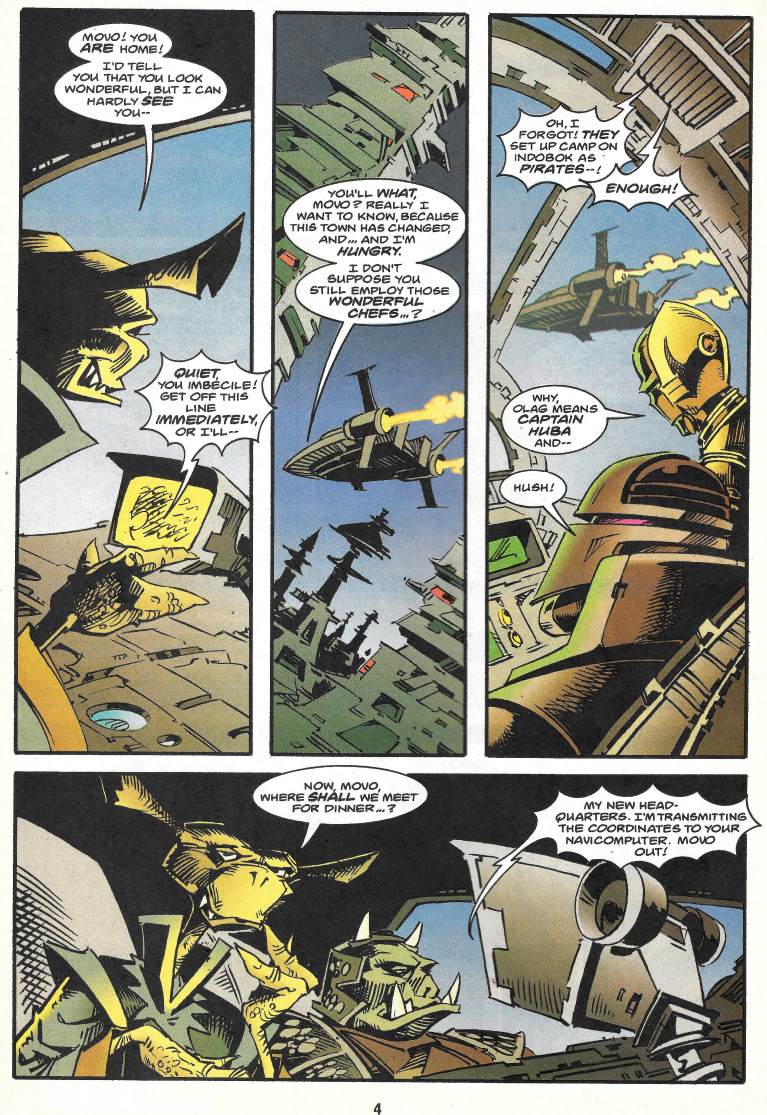 Threepio wants to “alert the authorities” now that they know where Olag is going. Zed sets him straight on how things work on Nar Shaddaa. And that's a no go on just shooting him out of the sky. He also need to capture Olag alive, so NO DISINTERGRATIONS! 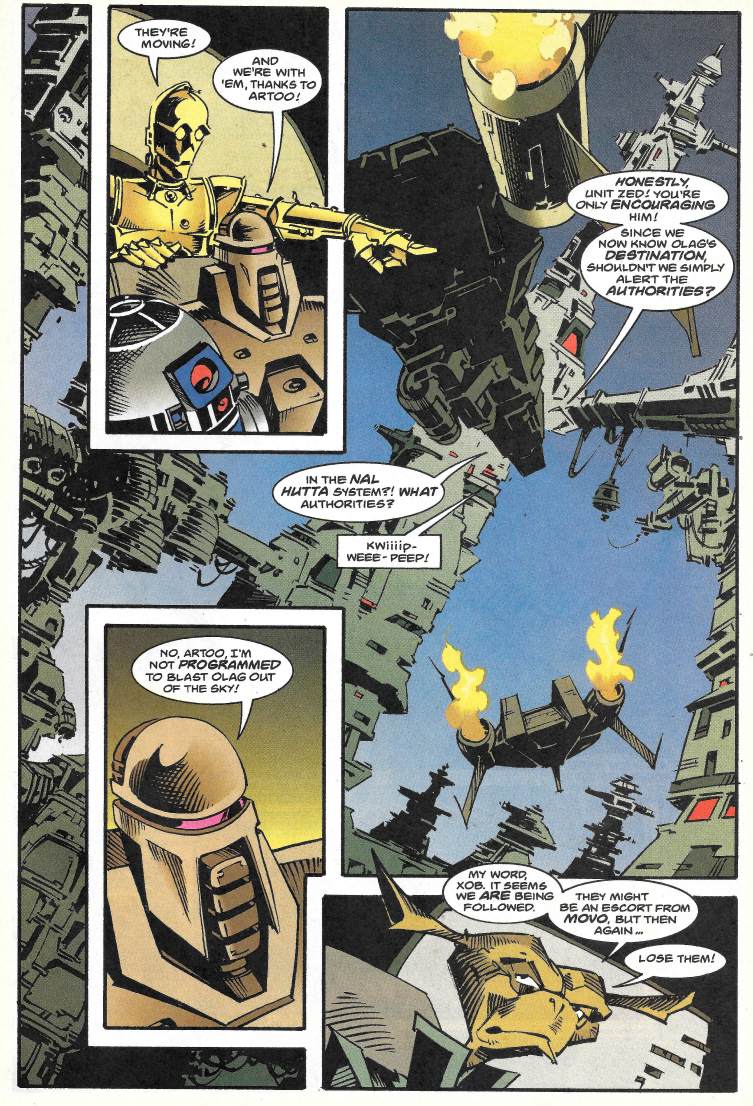 It’s right about here that Olag realizes he’s got a craft on his six and tries to lose that tail, meaning Zed has to do some fancy flying…

…ending with a few warning shots across Olag’s bow. 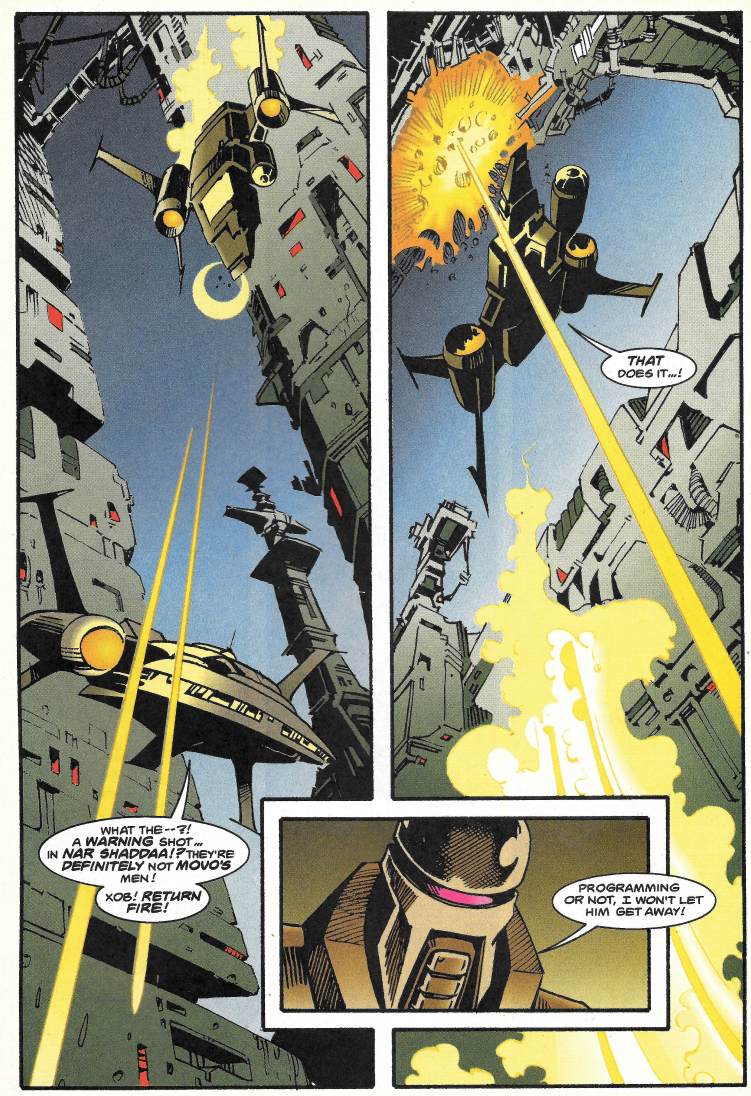 That gets under Olag’s skin, who after firing back decides to let Movo’s defenses take care of the craft behind him. Better that than leveling large parts of Nar Shaddaa trying to escape. 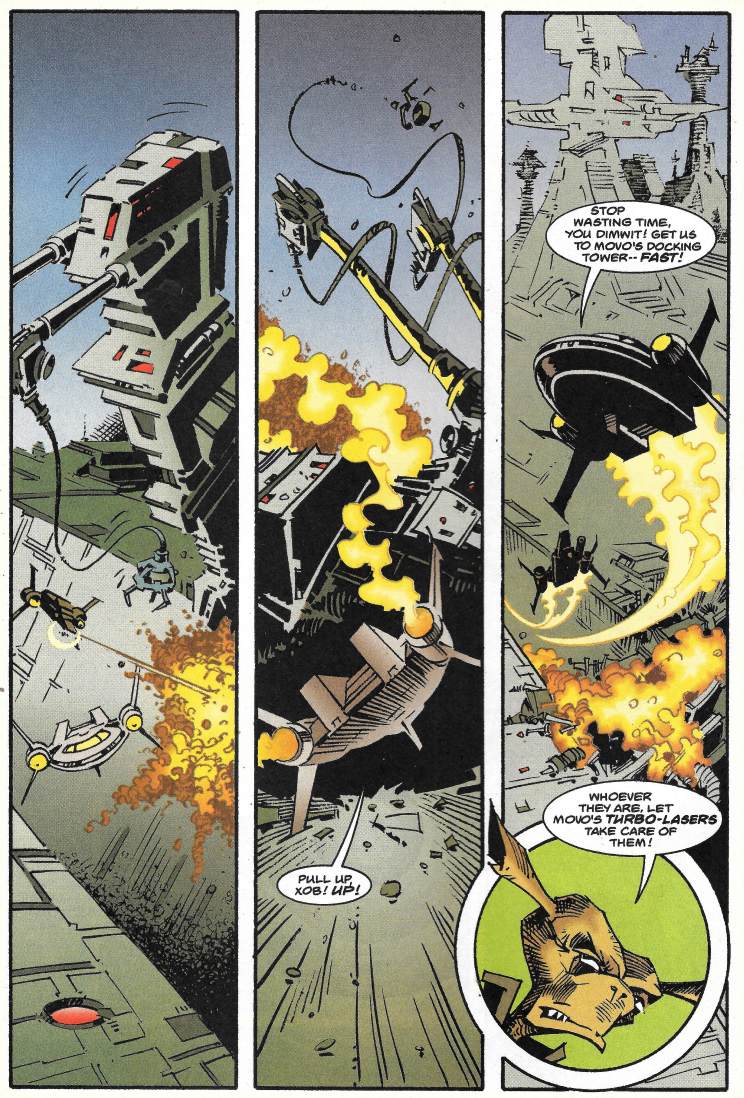 Zed’s shooting is a bit more on point. He disables their weapons and their ship, which then crashes directly into Movo’s hideout… 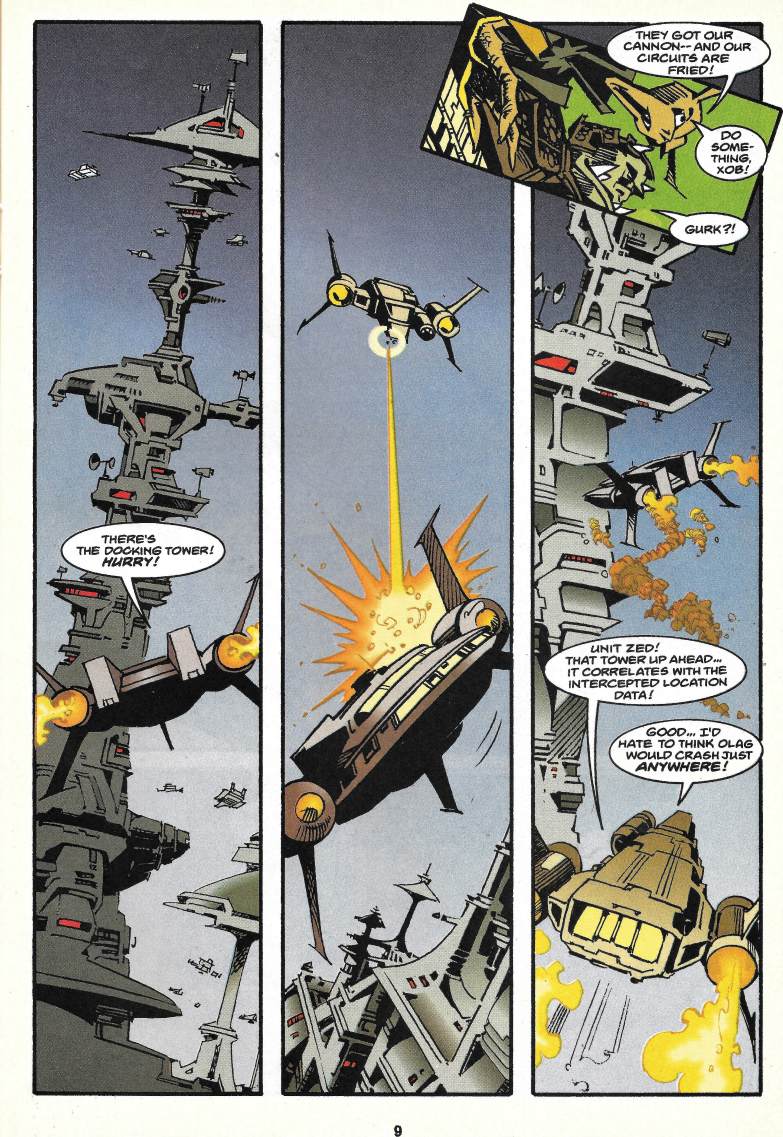 …and unfortunately, Movo himself, killing the criminal leader. 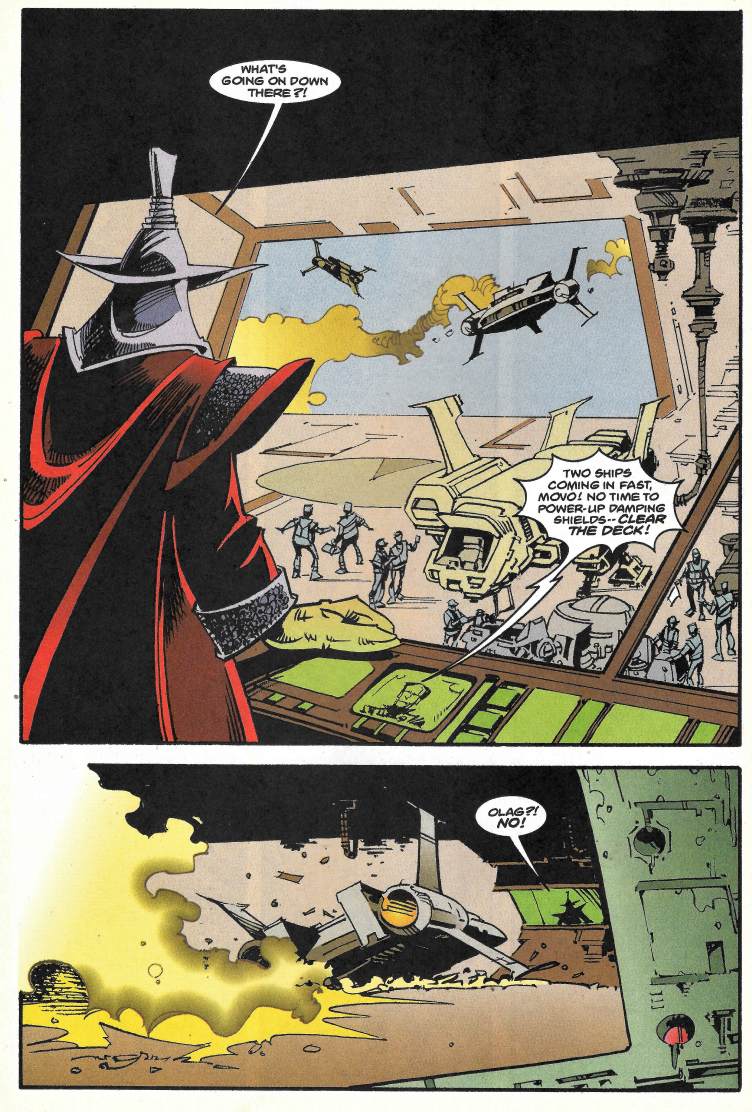 Our heroes aren’t far behind, Zed determined to take Olag in. 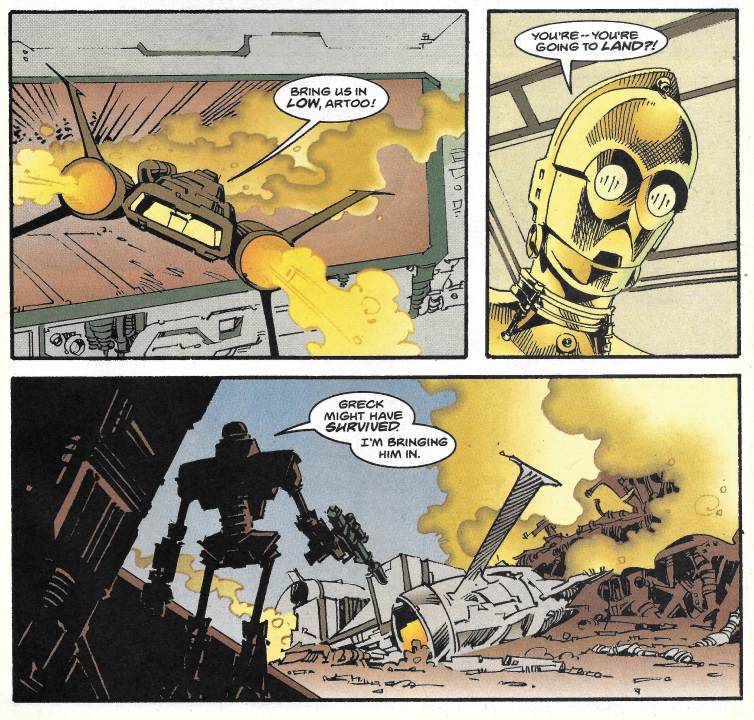 Which leads to a standoff, as Olag refuses to surrender. 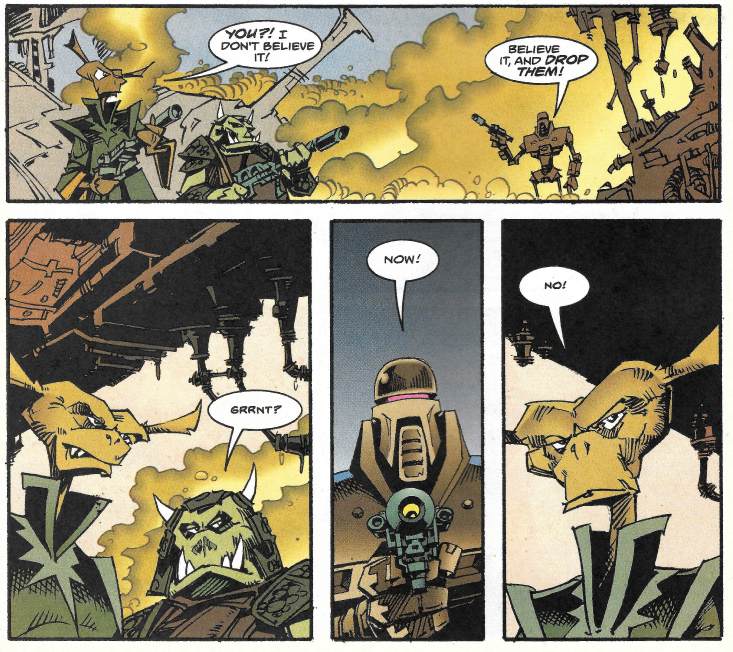 And instead his Gamorian guard opens fire, starting an all out pitched battle while Olag flees. Zed stuns the guard but is too damaged to pursue, so he turns to Treepio and Artoo to bring the criminal to justice. 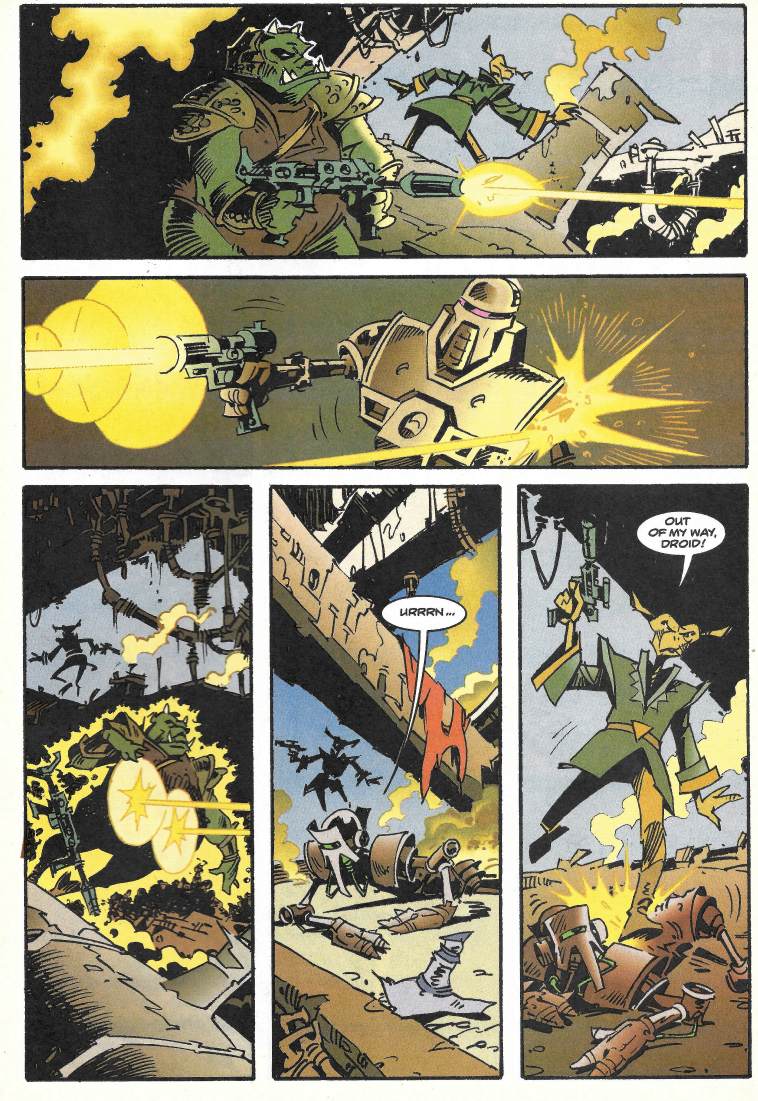 Threepio accepts this task with his usual fussy, uptight manner. Note how he holds the gun. 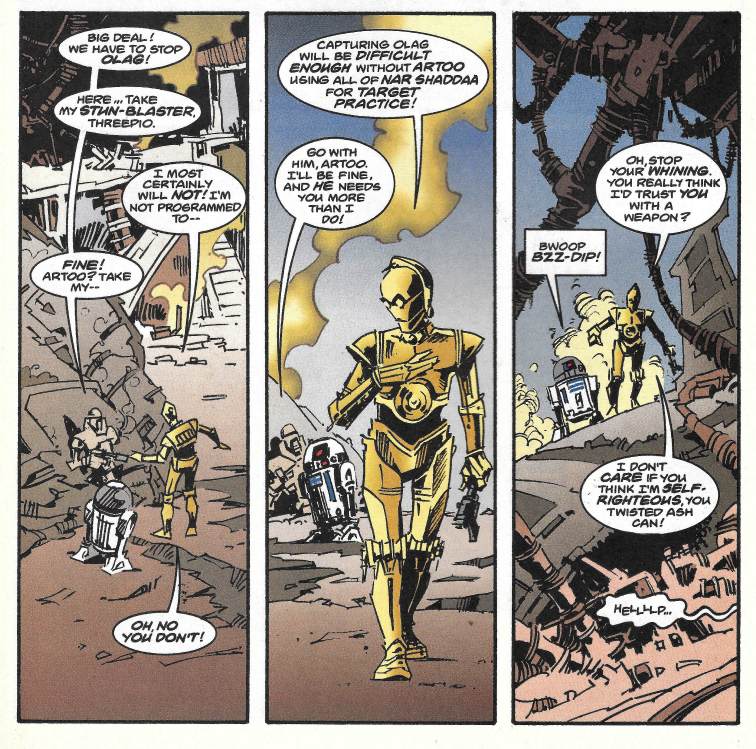 On the way they assist Movo’s personal assistant droid, who was knocked down in the scuffle. Threepio leaves the gun on the ground and after the pair has passed, the rust colored robot alerts security to their presence. 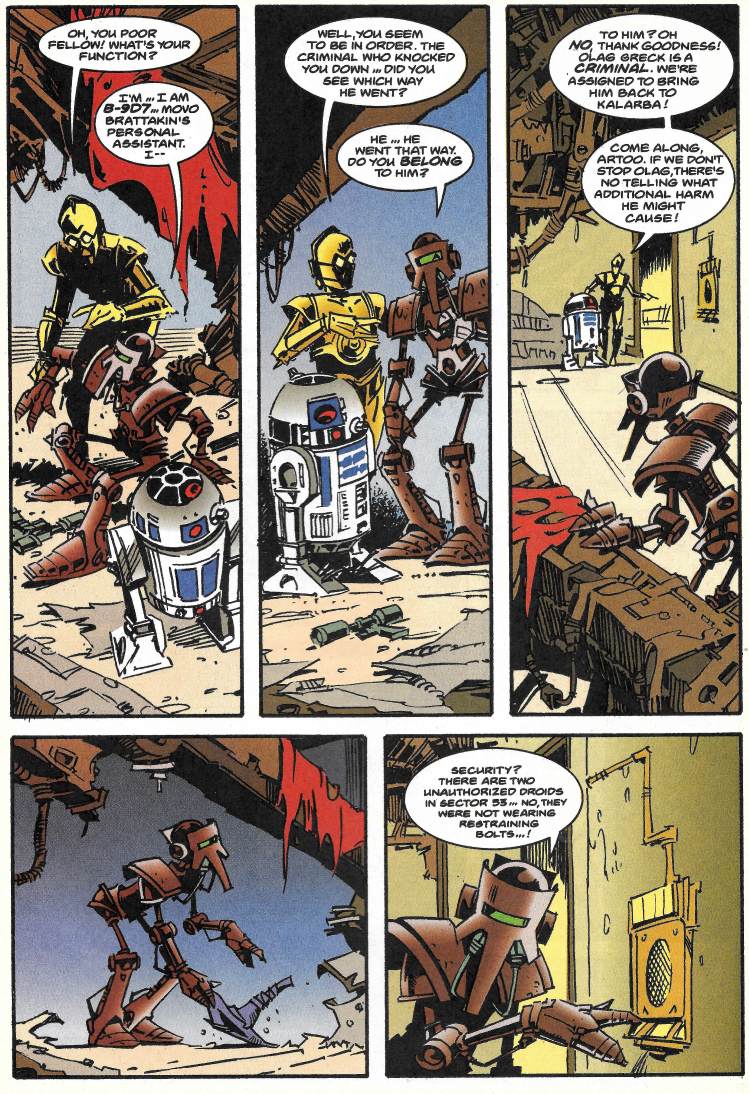 The pair find Olag, who is trying to get a big Hutt like slug creature out of his way. 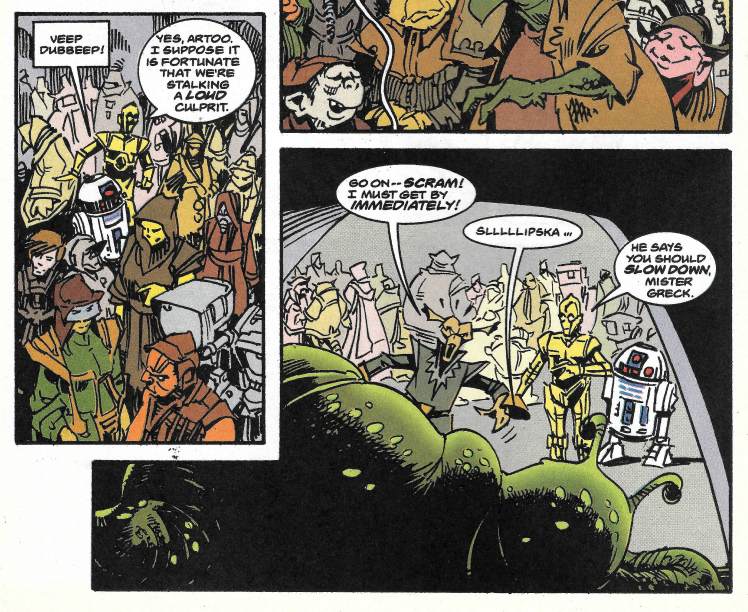 Threepio tries to approach the situation in a calm rational manner, but when Olag refuses to listen to reason, Artoo draws down on the criminal being. 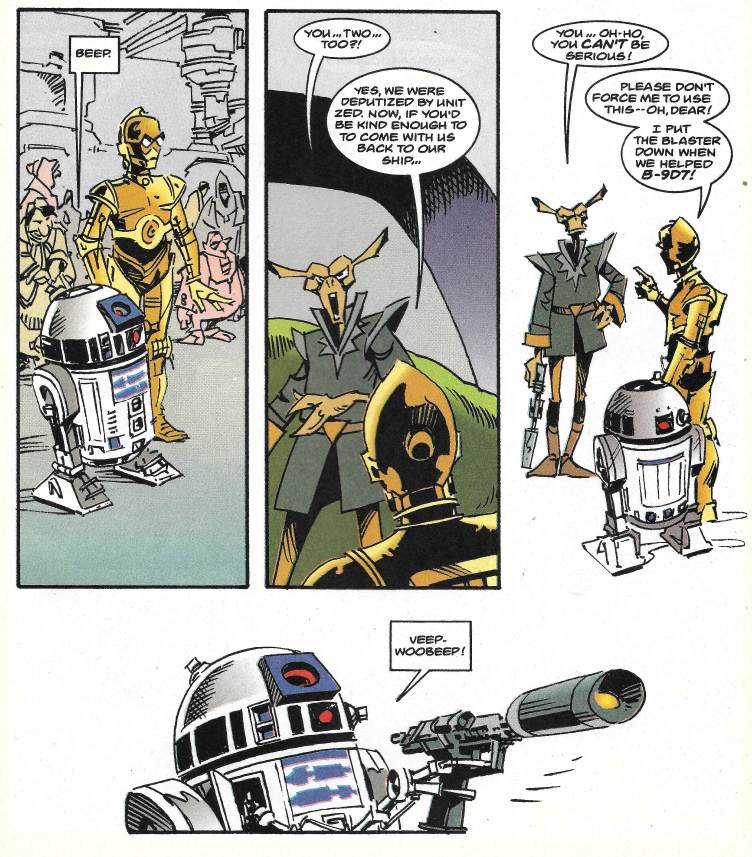 Check out that droid packing heat. Also, VEEP-WOOBEEP is droid for “Go ahead. Make my day.”

Olag won’t come quietly. At least not until he is squashed by the fainting slug monster, who had too much of all this excitement. 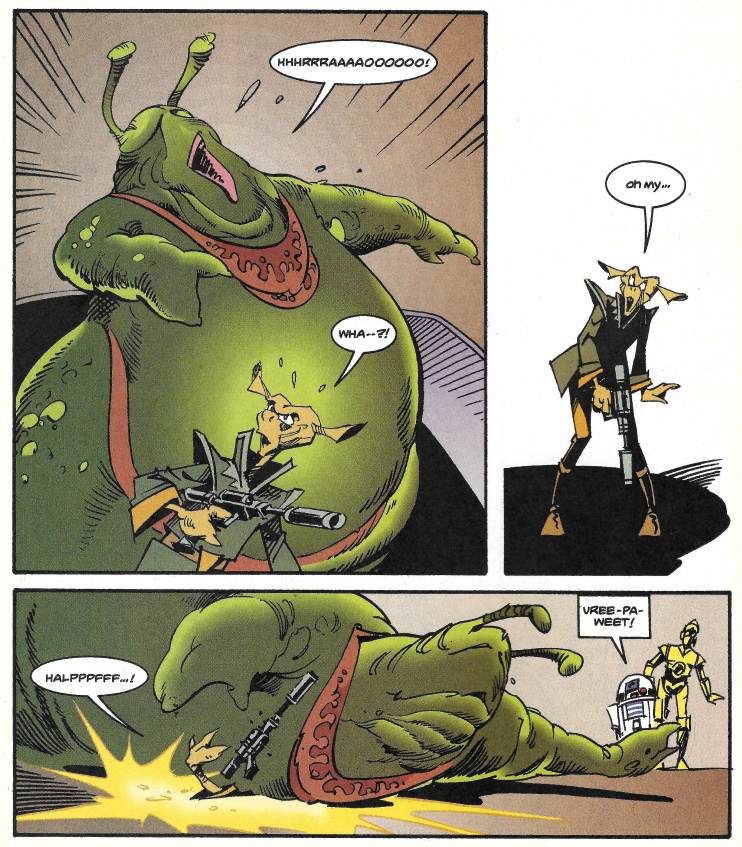 About this time Zed shows up and we think everything is just about wrapped up on this adventure. Zed takes back his gun from Artoo, they nab Olag and turn to leave… 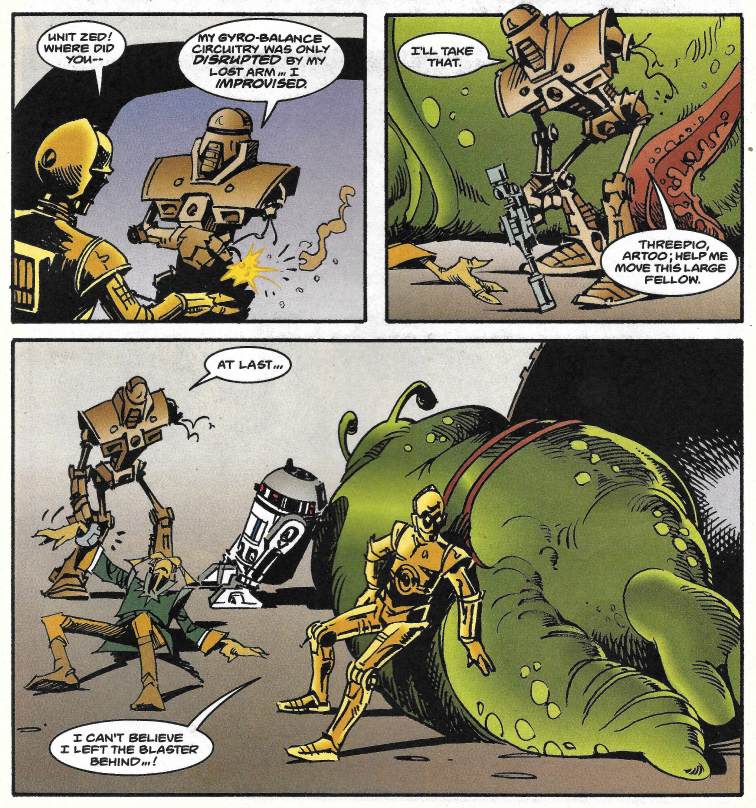 …and this is where the entire mission goes to pot. Those are the security forces that the rust-colored robot called in. They are Movo’s men and they now have a new leader. Just who that is, we don’t find out this issue. 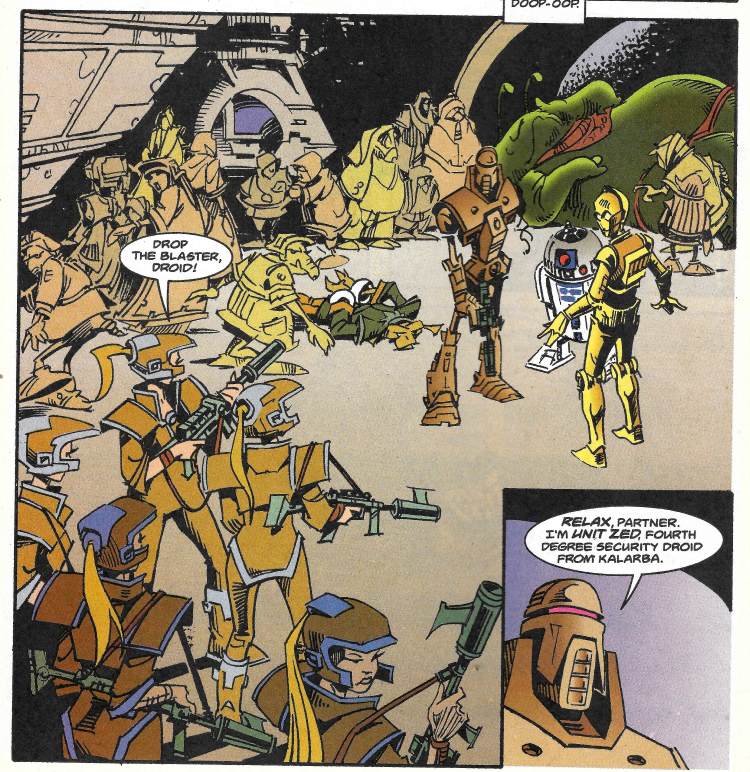 But whomever it is, they don’t recognize Zed’s authority in any of this and blast him literally in two. 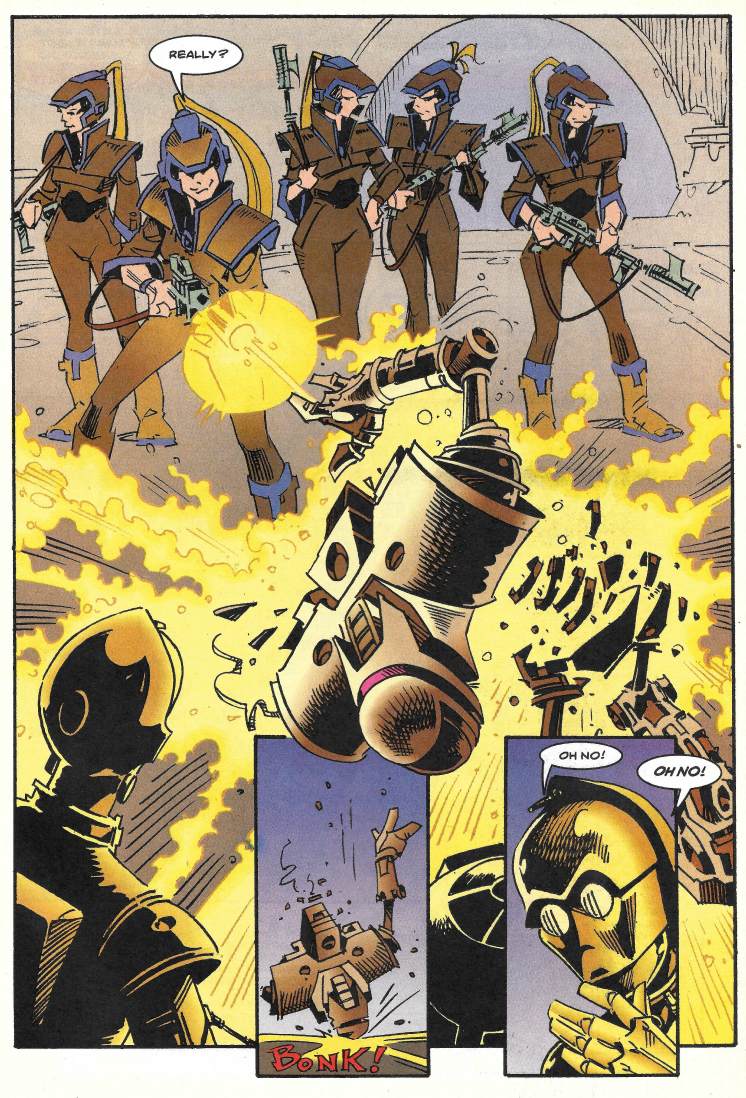 The leader of the guards is a young woman who doesn’t care about Zed’s mission or his apparent death. 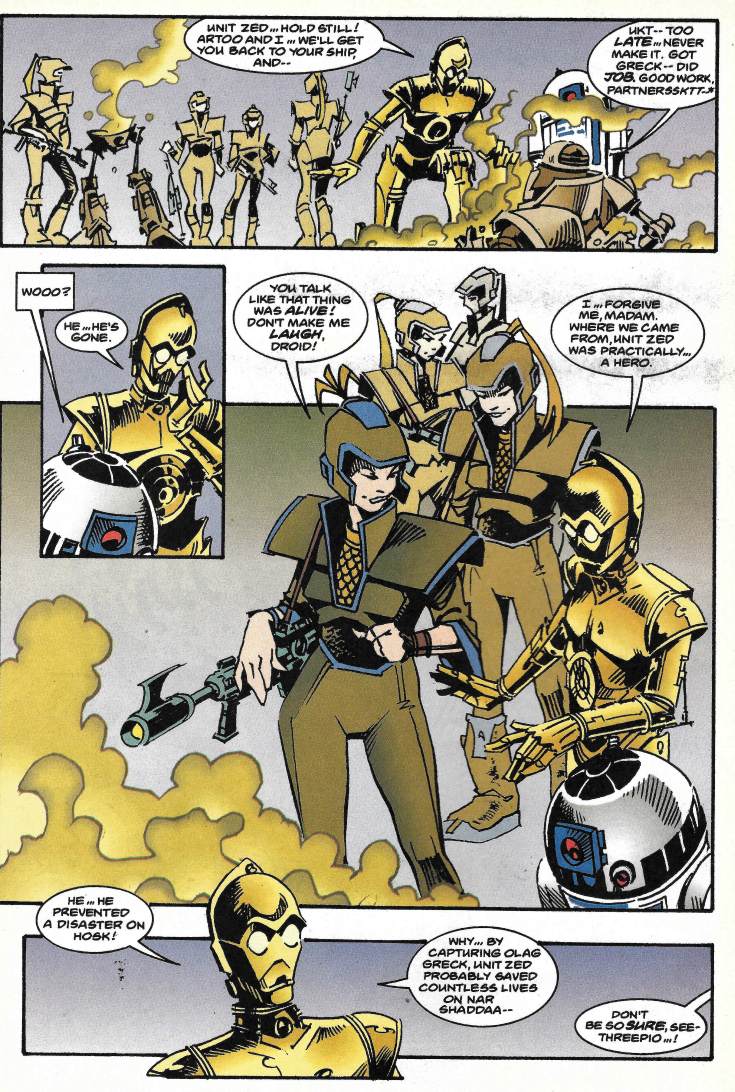 In fact, she’s an ex-companion of Olag’s and Movo’s former head of security (now that he’s dead, that is). Seems she’s without a job now that Movo’s dead. Or maybe she’s working for someone new. Can’t really tell. 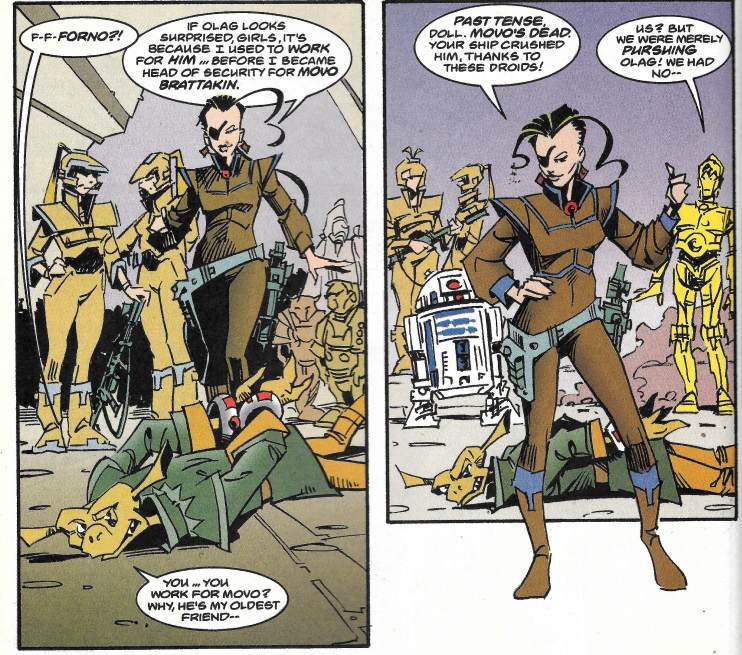 What we can tell, is that like most of the audience, she gets sick of Threepio’s effeminate chatter… 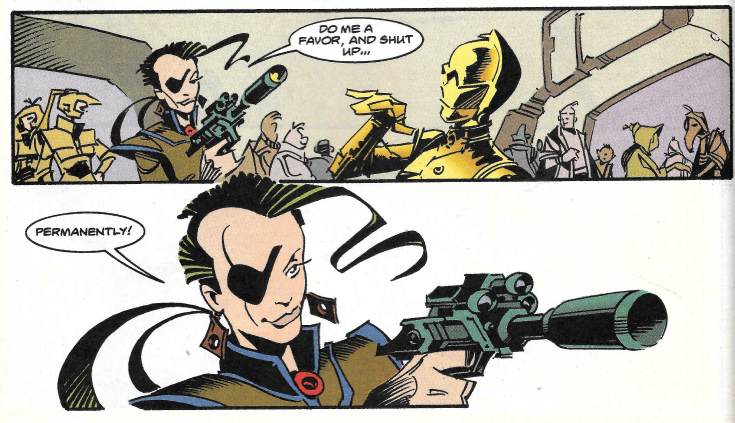 Tells him to shut up… 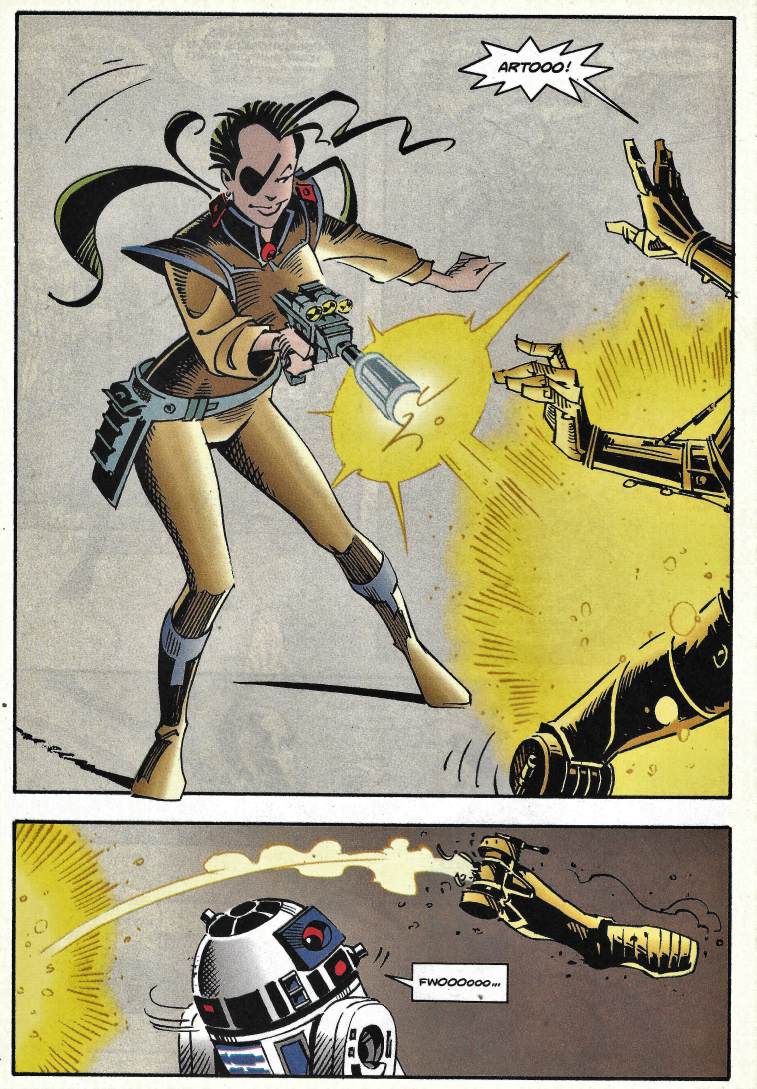 And then blasts him.

Well, that ended on a dark note.

How do I feel about this issue? My feelings are a bit mixed. The best thing about it is the art, which has a very Walt Simonson feel to it. The character layouts and panels evoke his pencils from the end of his Thor run. I am a huge fan of that style and this artist has some of the same energy.

In the good and bad category is the sparsity of the dialogue. The story is told with a great deal of brevity and while that makes it a super fast read, it doesn’t really stick with you. It’s not offensively bad, but it just seems light. For a 23 page story you get very little meat.

On the slightly negative side too is the fact that this book appears to be going for a multi-issue storyline of some depth, yet in doing so we get what feels like barely enough info on what’s going on to scratch the surface. Maybe reading the prior Droids arc in Volume One from Dark Horse would shed some light on all this? However, this story should have a bit more lead-in text so the audience can invest if that’s the case.

In the end that makes this issue fall more in the positive than the negative for me. The art really tips the scales and I found myself digging the second issue out of the Crapbox to read it too, hoping it would explain more about these characters.

So I’d say it was a buy. I mean where else can I see someone blow Threepio’s leg off with a blaster shot?
Posted by SonOfCthulhu at 1:57 AM