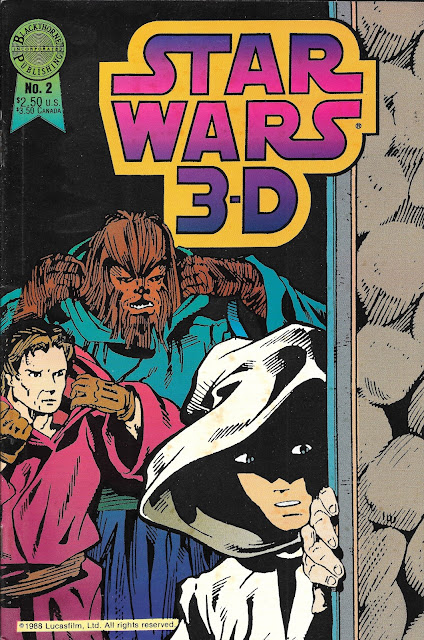 Now that everyone has seen the new Star Wars flick we can get back to the toy tie-ins...

What? One more day? Seriously?

Alright then, I’ll give you that one more day with a look back at Blackthorne Publishings’ Star Wars 3-D series, made possible by the little loophole that could that allowed Blackthorne to publish these right after Marvel’s short-lived Droids and Ewoks books at the tail-end of a decade of holding the licensing.

Blackthorne got three issues out of the 3-D title, which were later reprinted in black and white, non-3-D format by Dark Horse in their 2013 Omnibus called Star Wars: Wild Space. I’ll be color correcting them here on the blog so you see them in black and white too, given that my scanner drops out the non-repro blue used in the 3-D process. However, I will state that the 3-D isn’t that great. Either that or my glasses that came with the Journey to the Center of the Earth DVD are sucky, one or the other.

This is what an unaltered page looks like out of my scanner: 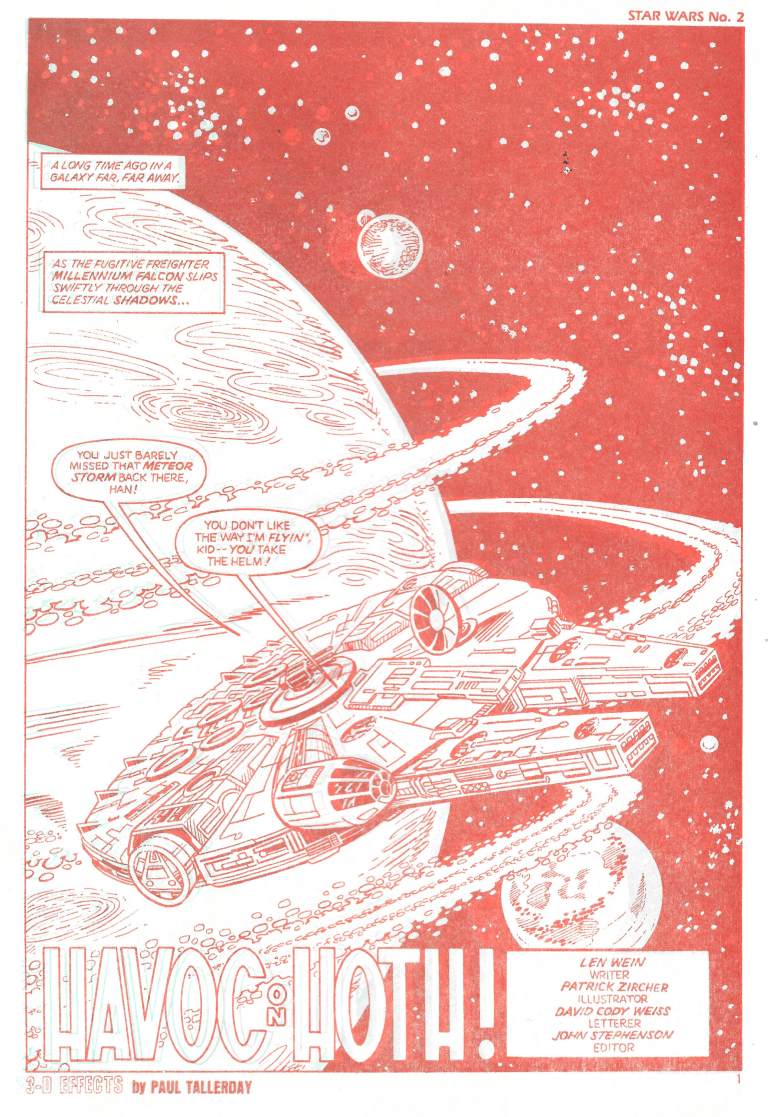 On we go with Len Wein an Patrick Zircher’s “Havok on Hoth”. This story is set between A New Hope and Empire Strikes Back, telling details we never though were important and really aren’t. Wein does a good job covering ground that Marvel had already paved into highway-sized thoroughfares over the course of nine years and 107 issues. Let’s see what he can do with it here, because Wein was a professional storyteller who could spin a good yarn when it came down to it.

Luke, Han, Chewie, and Threepio make their way back from a little jaunt in the Falcon… 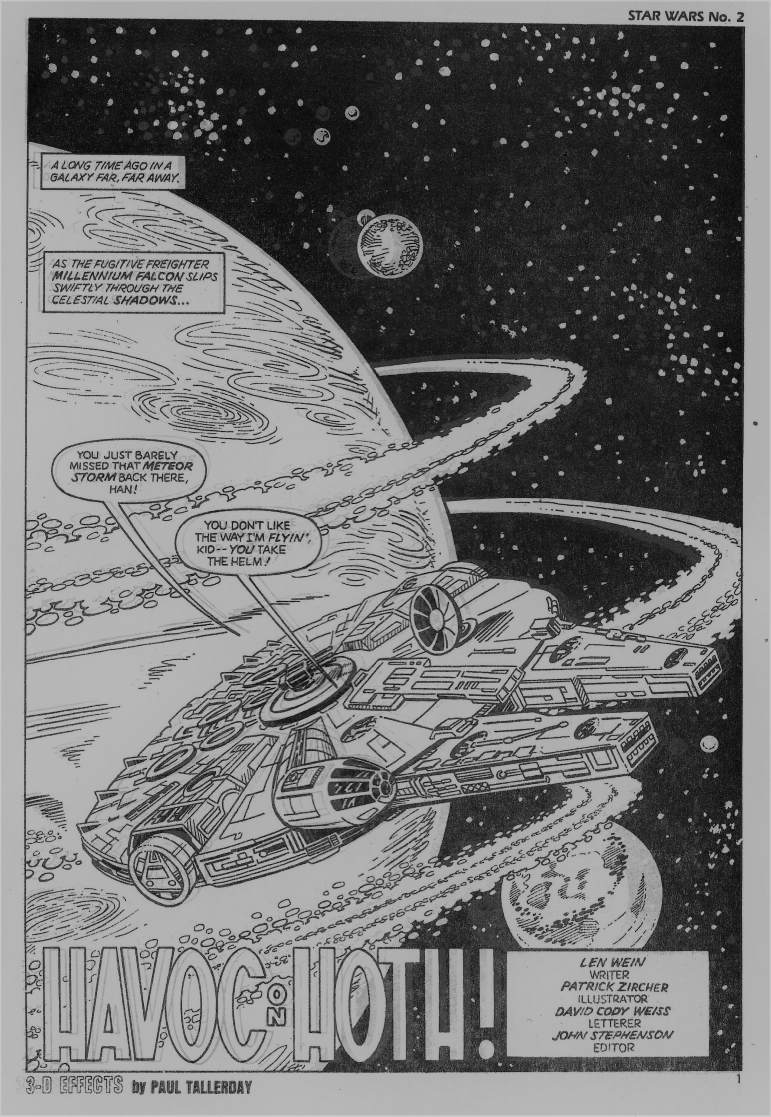 …to Tatooine (which we find out, care of the last issue block) so that Luke could be sure his late Uncle’s moisture farm passed on to someone worthy of having it. As story hook, I suppose it is somewhere to start hanging things off of A New Hope, but for me this doesn’t work so well. Luke and Han both had bigger fish to fry than a dried-up plot of land on a planet that is in Luke’s own admission off the beaten path. 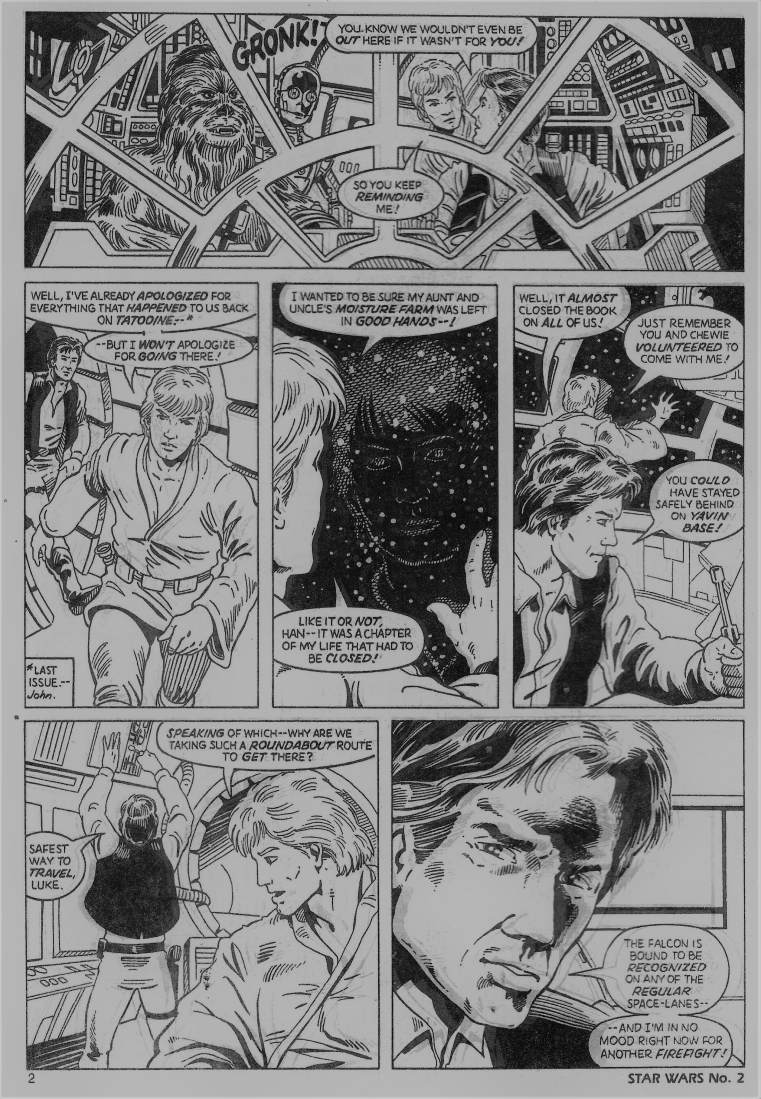 Han and Luke are headed back to Yavin base, but they receive no answer on the comms and Threepio starts bothering them… 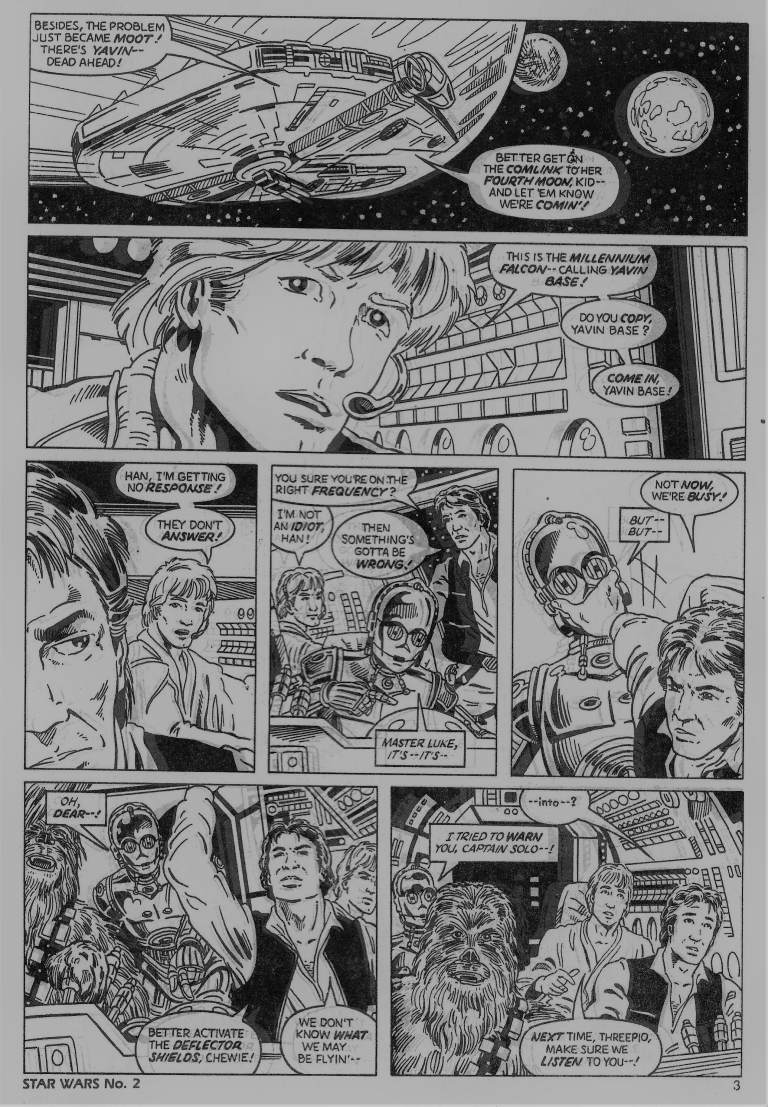 …with good reason. A sit appears there is a small army of Star Destroyers between them and Yavin’s moon. Including … an Imperial Shuttle? 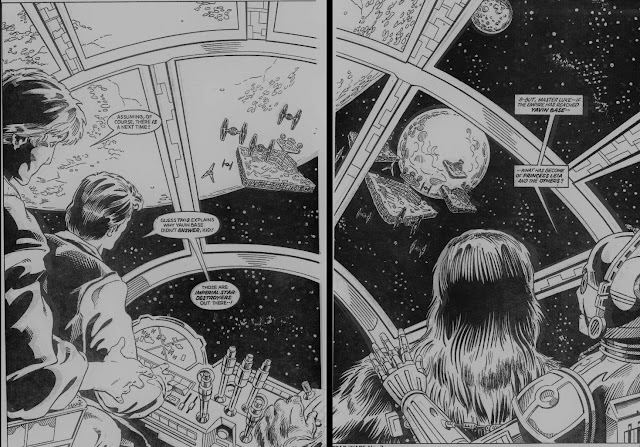 And on one of those crafts is none other than Darth Vader himself, hanging out in the best Christmas ornament ever … 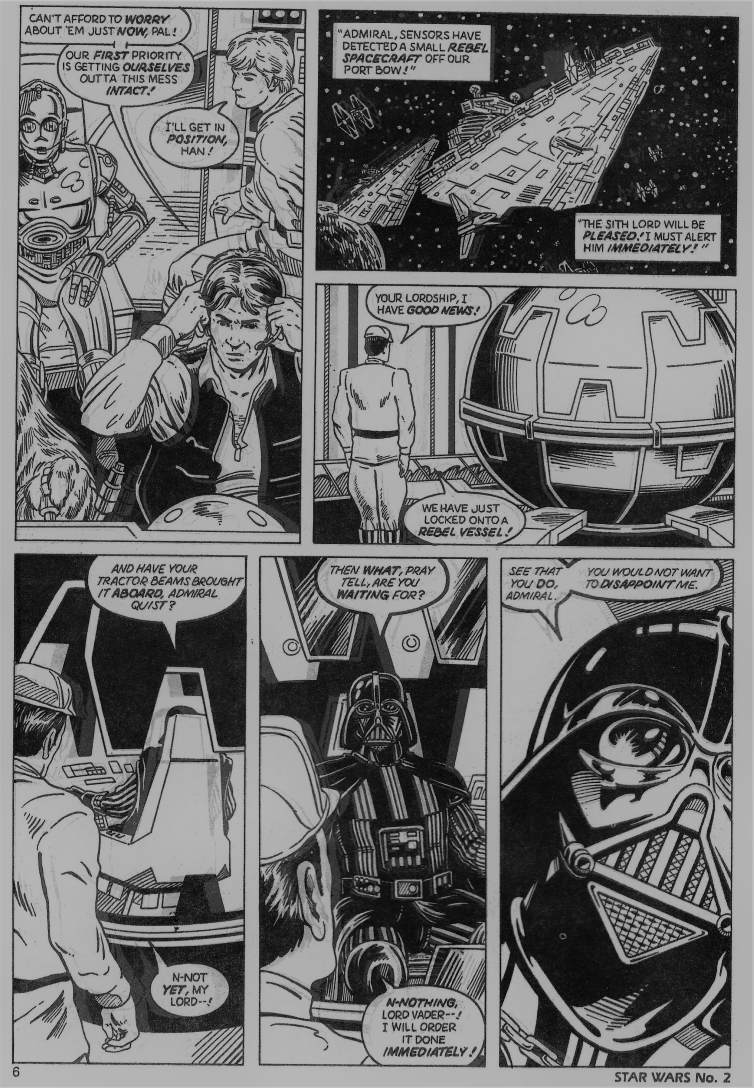 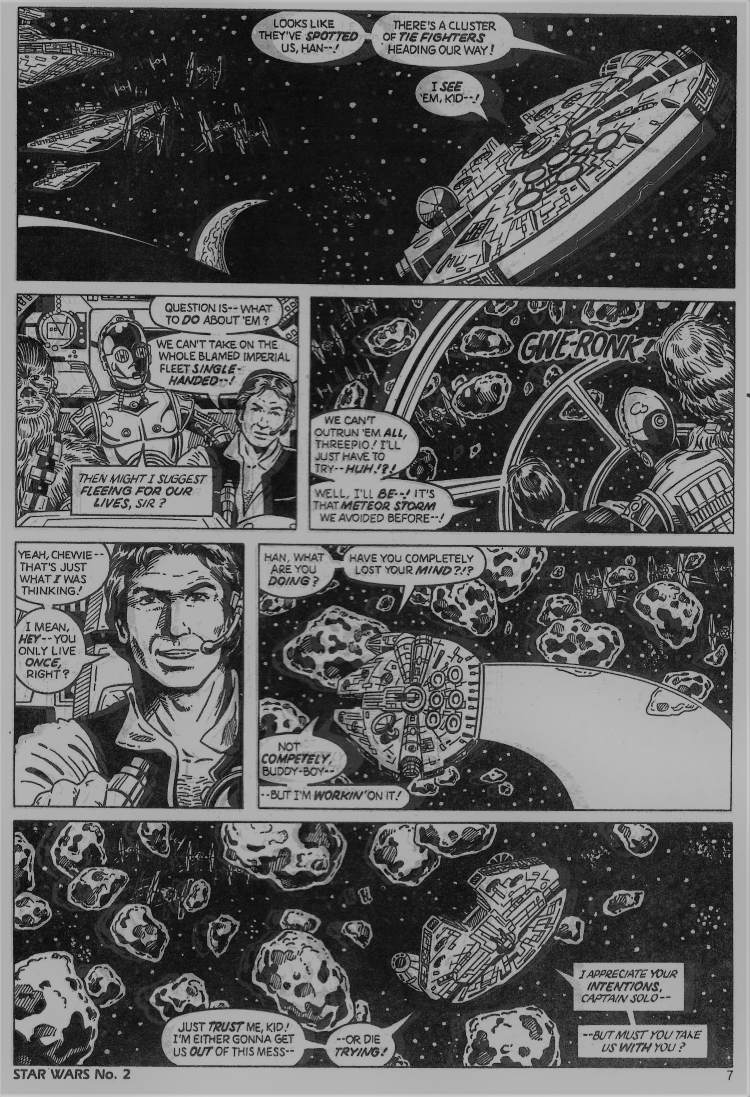 …diving into an asteroid field which he would do again in Empire Strikes back to avoid the exact same fate. There’s something very odd about seeing Han repeat something before he does it the first time. I’m not certain I like it very much. 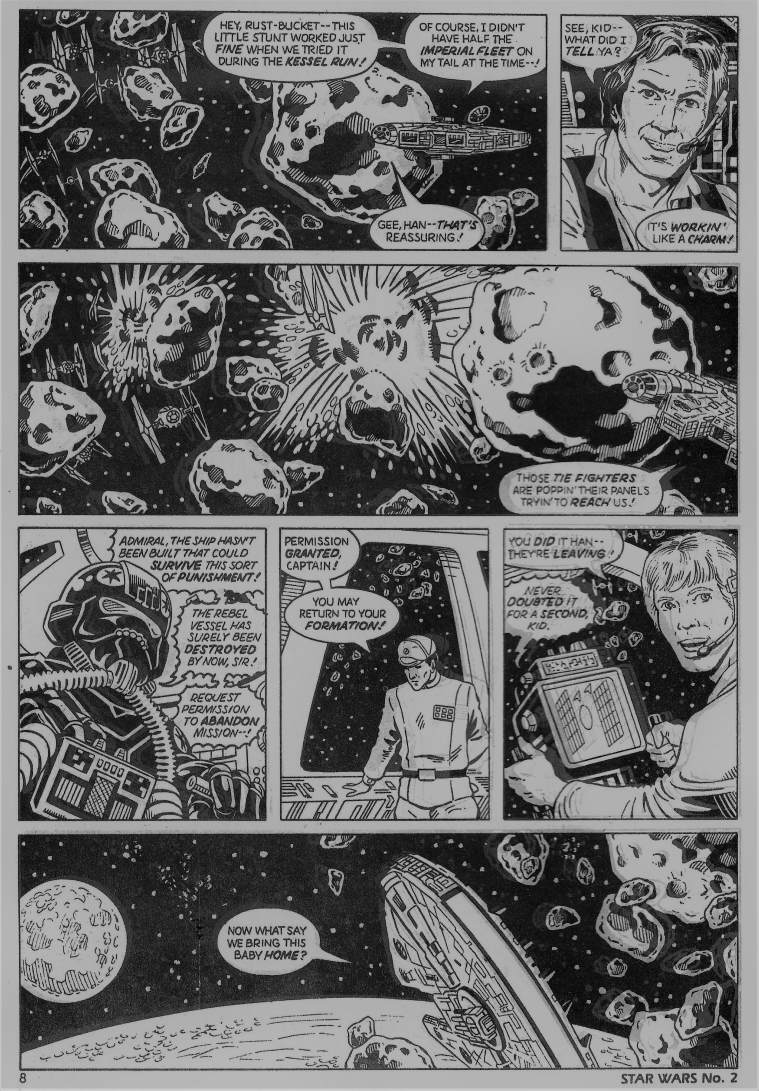 Oh, and that admiral failed Vader so… 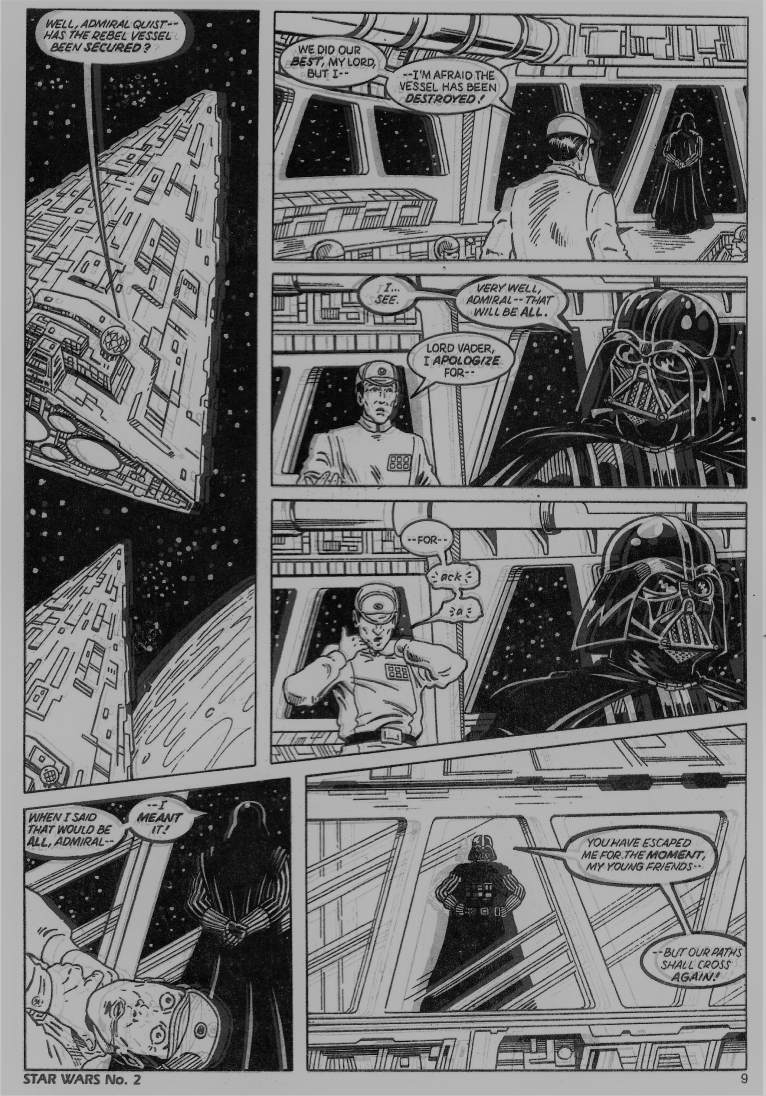 HR is going to have a field day with Vader before that next movie is through. If only they had some kind of “Force Sensitivity” training to send him through.
Luke and Han arrive to find the base empty and off they go to the secondary rendezvous point that Luke knows by memory. 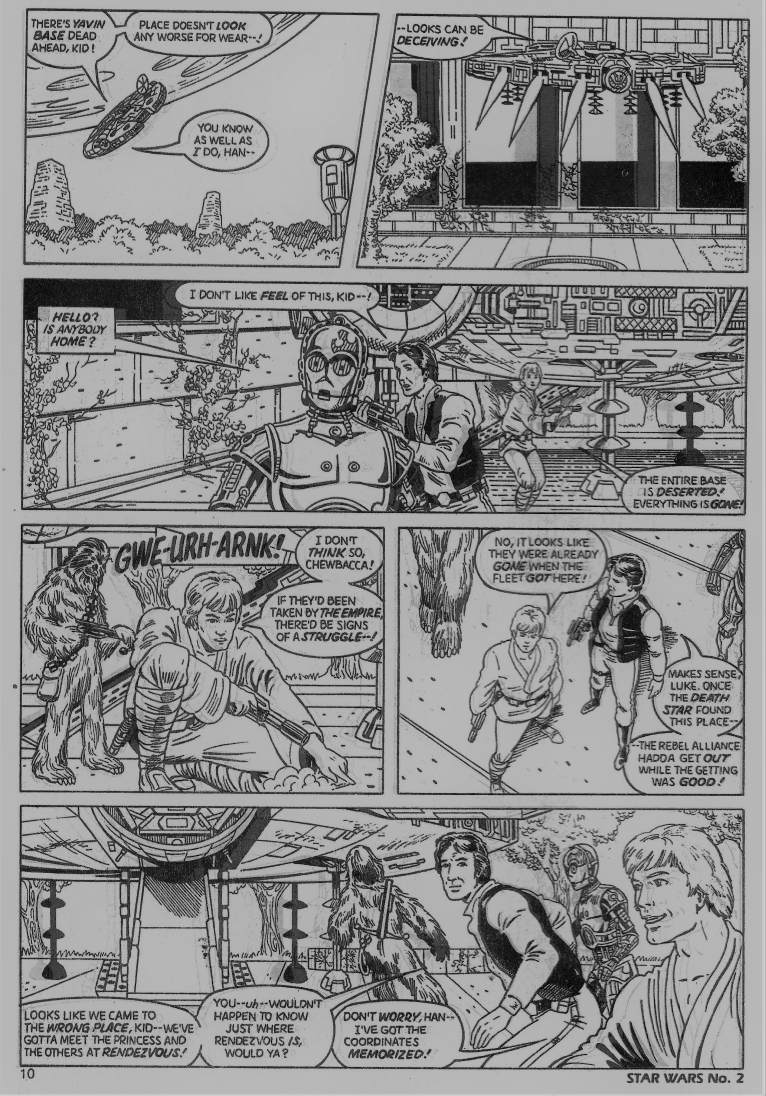 Which leads to some neat shots of the classic fleet (sigh, The Last Jedi did TOO!) and an awkward reunion of the Skywalker siblings, who didn’t know at the time were siblings, but the audience at the time the issue came out knew were siblings since the publication date was AFTER Return of the Jedi and…whoa, got dizzy there for a moment. STOP TOUCHING YOUR SISTER LIKE THAT! 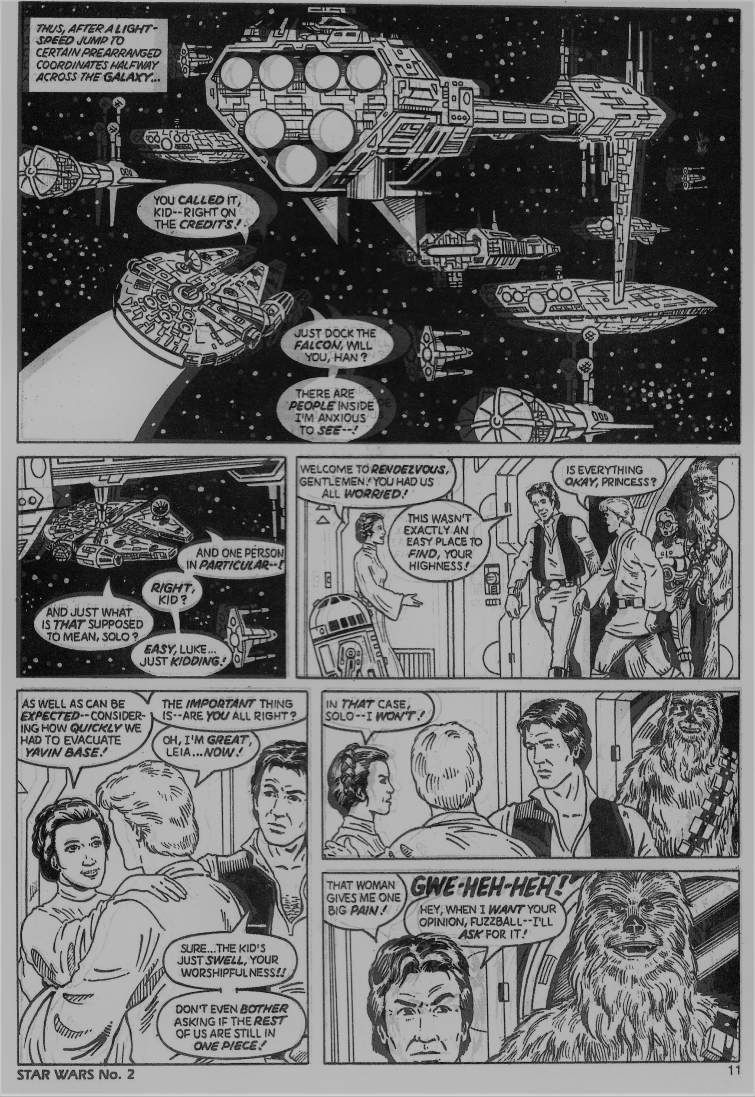 Also, I’m not sure Wookiees make that noise.

We get our droids back together, then Han and Leia share a moment of that thing they do so well, that looks like fighting but really is something completely different. 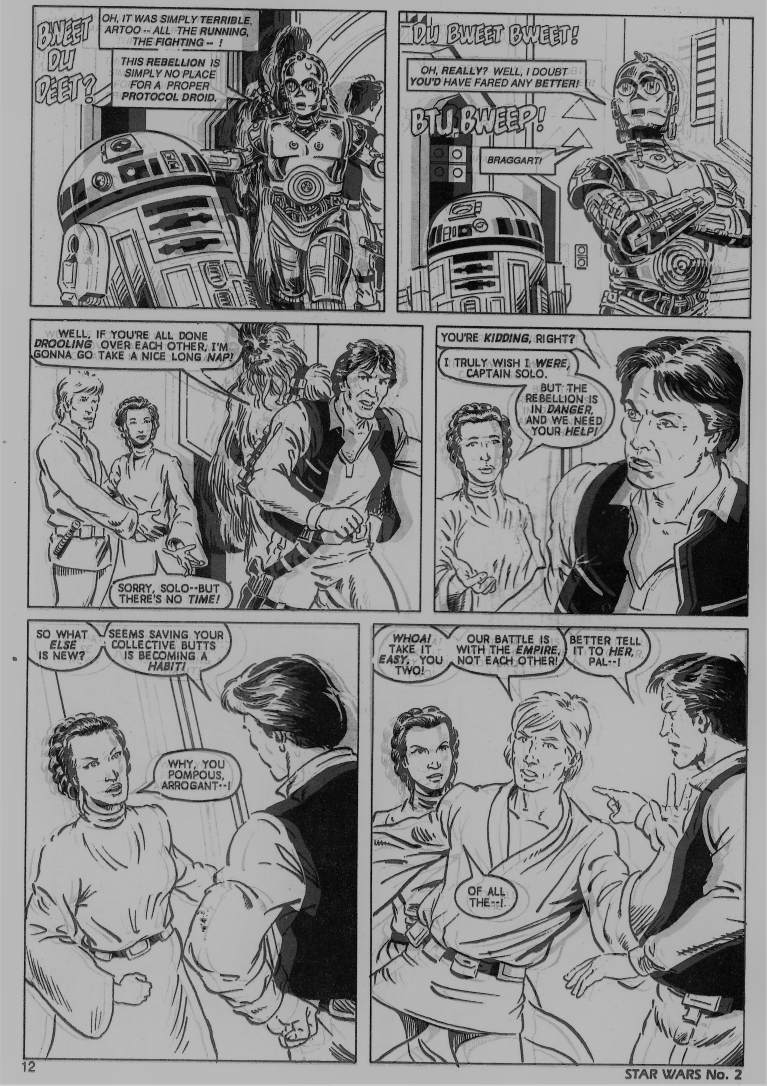 And then HAN suggests they hide out on Hoth. Not the two of them, I mean the rebellion. 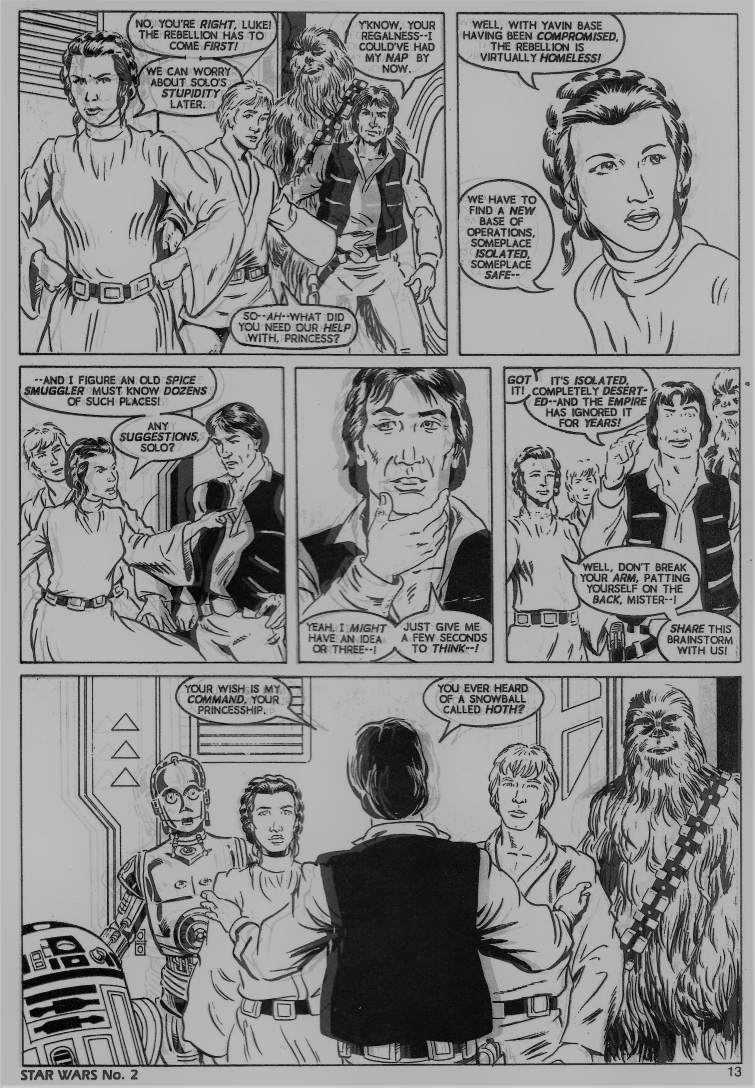 Since this is Han’s big idea, he, Luke, Chewie and the droids go to scout it out. 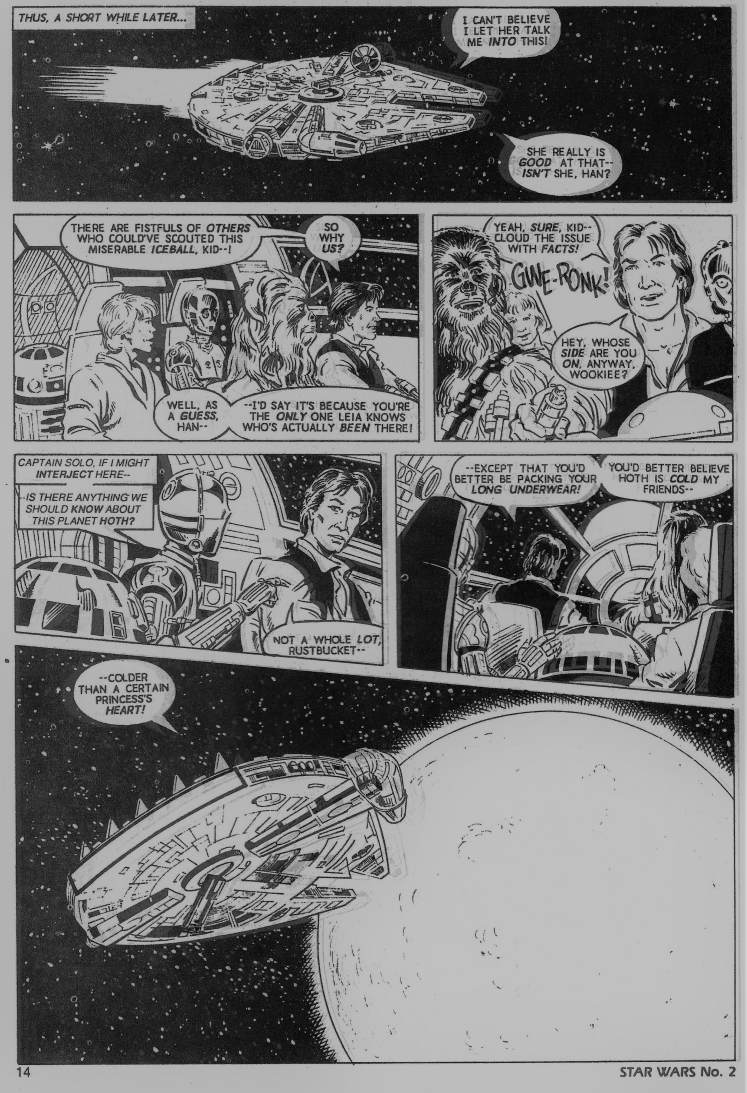 And it’s a desolate, inhabitable frozen world, for sure, except where it isn’t. Which happens to be where they’ve landed. 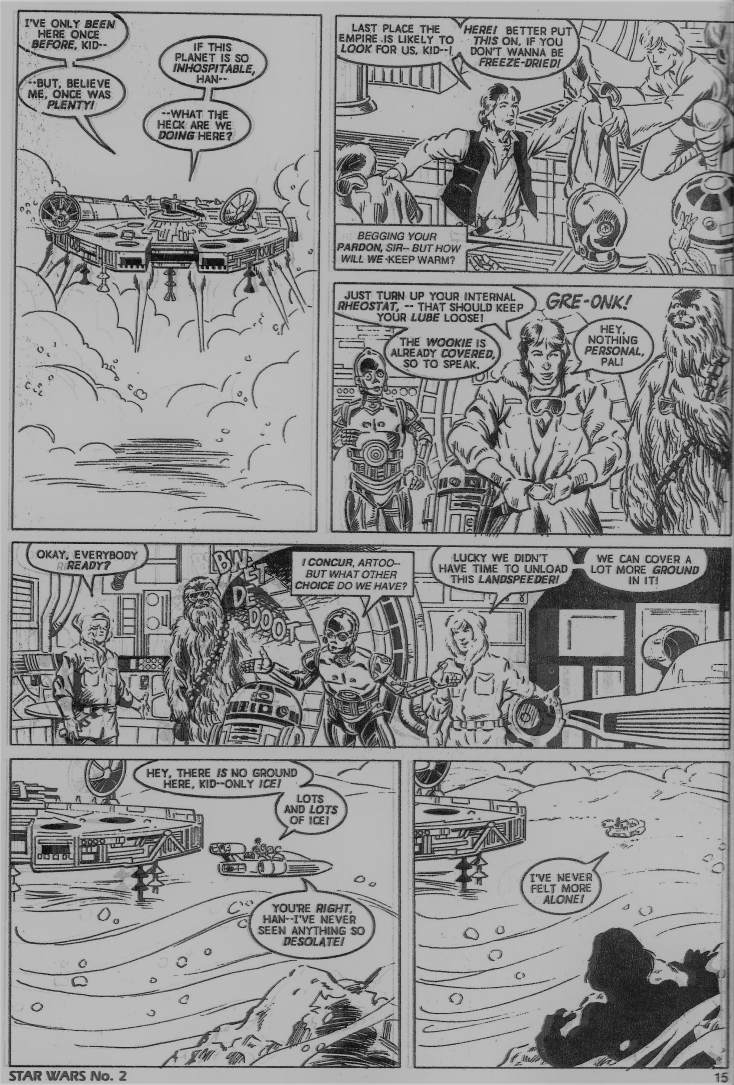 We get to see the group discover a Tauntaun pack, which I’m pretty sure couldn’t happen as my inner Star Wars geek says those weren’t native to Hoth. Wookieepedia says they were, but if so why does Han’s  die of exposure when he went looking for Luke. Thanks for making me feel like I spend way too much time ruminating about Star Wars, comic book. I’m sure the area holding that tidbit of information could have probably been used to store something waaaaay more beneficial. 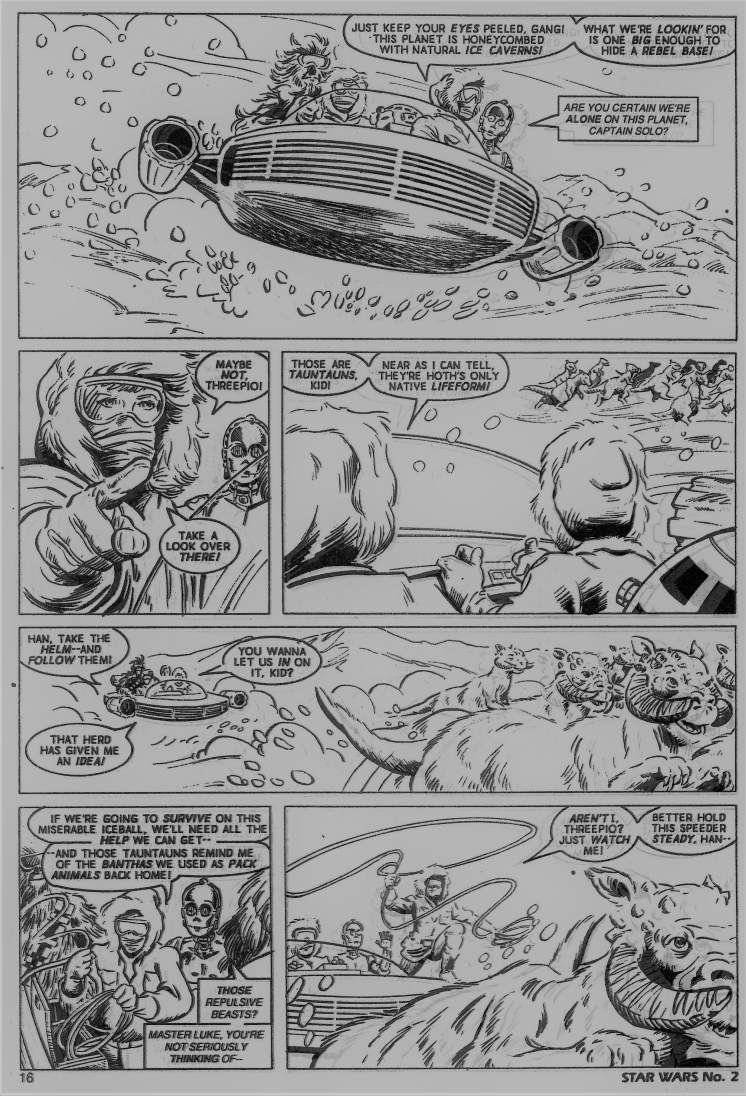 Butat least I didn’t think about them as much as this guy. And I’d dispute that itdied due to exhaustion.
Anyway, Luke tries to make like a “Space Cowboy”… 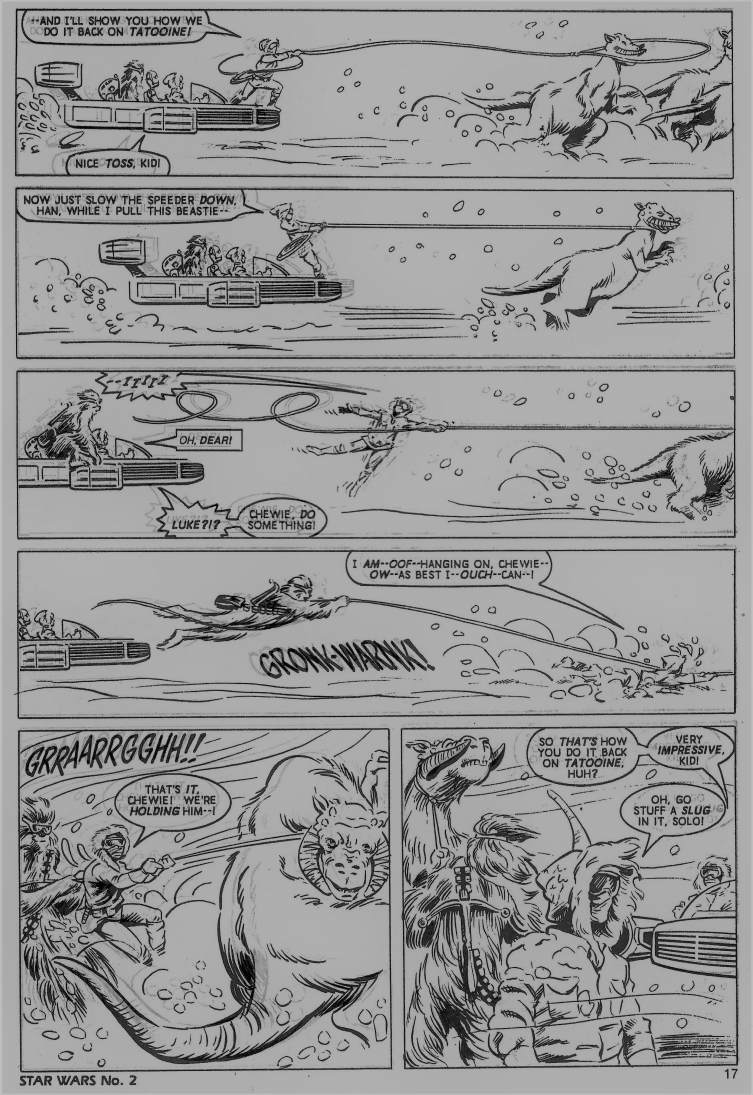 Which leads to a couple of pages of funny physical humor, enough to make me forgive the book bringing up the whole logical Tauntaun puzzle. The physical humor in that top bit is both silly and wins points with me in a story that I felt was very much “been here-done this”. 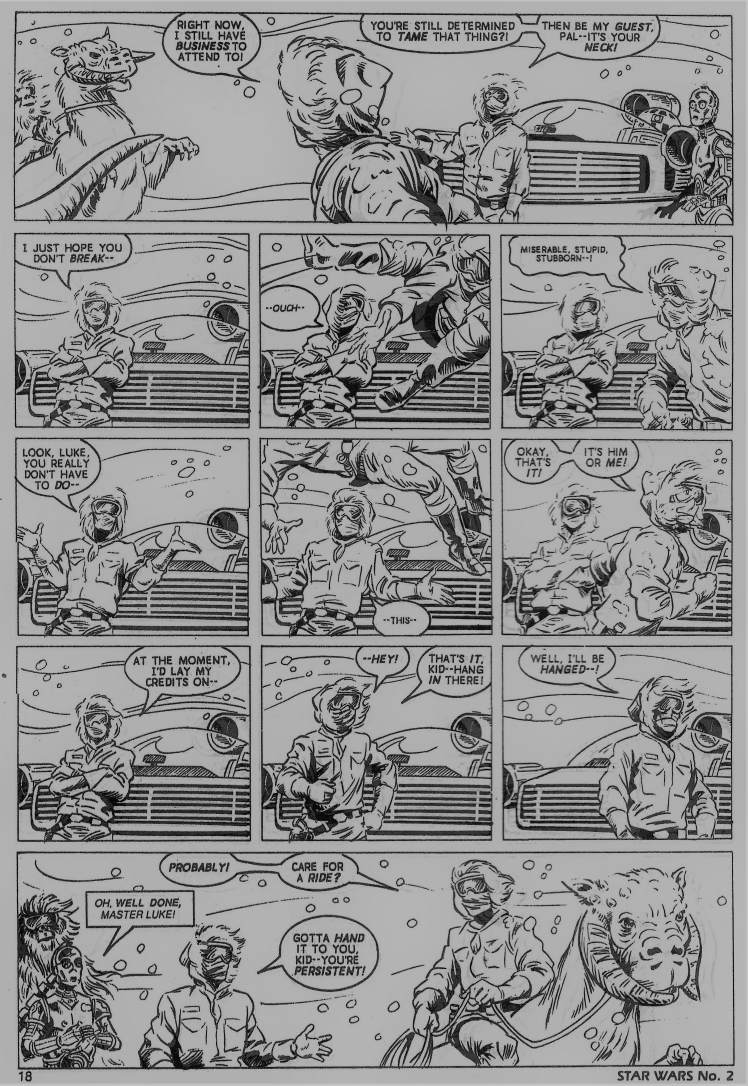 And if I thought that moment of levity lightened up the mood enough for me to give the book some points, the page that follows with Luke attempting to tame the strange furry lizard thing made ticked its score up even higher.

Then we are back to a standard adventure tale with some smugglers who have also picked Hoth as the perfect hiding place, taking pot-shots at our intrepid band. 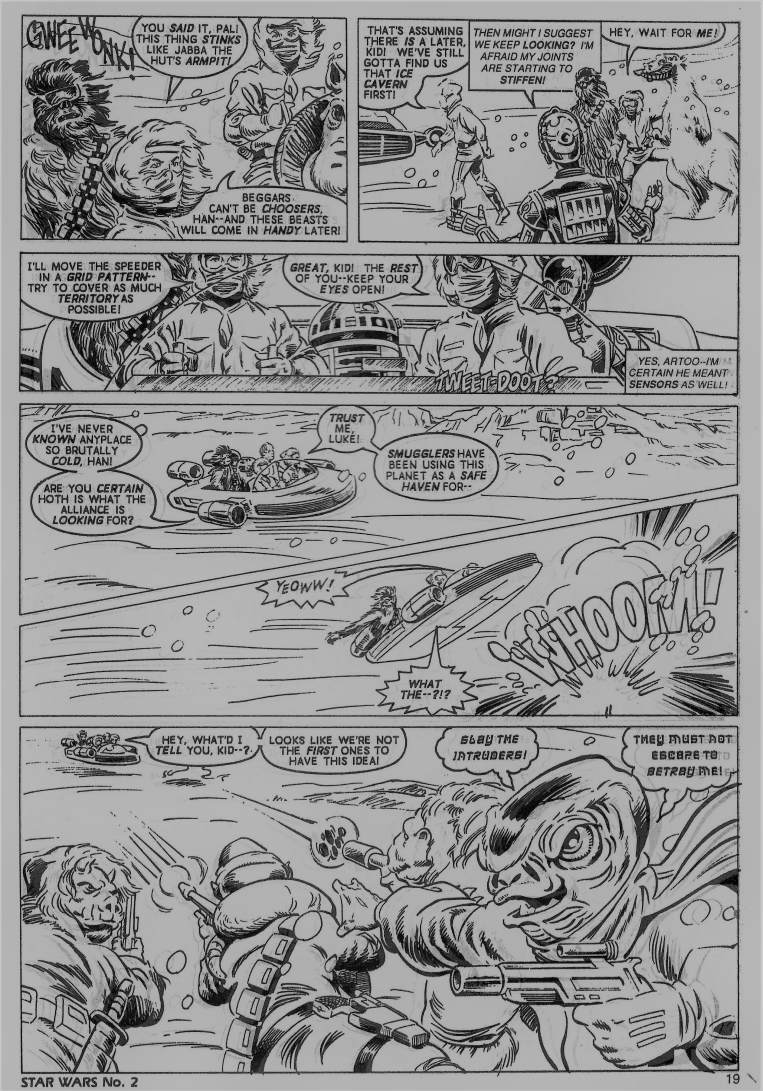 Until they realize that their target is Han Solo, still wanted by Jabba and having a huge bounty on his head. Which only increases the barrage of fire coming at them. 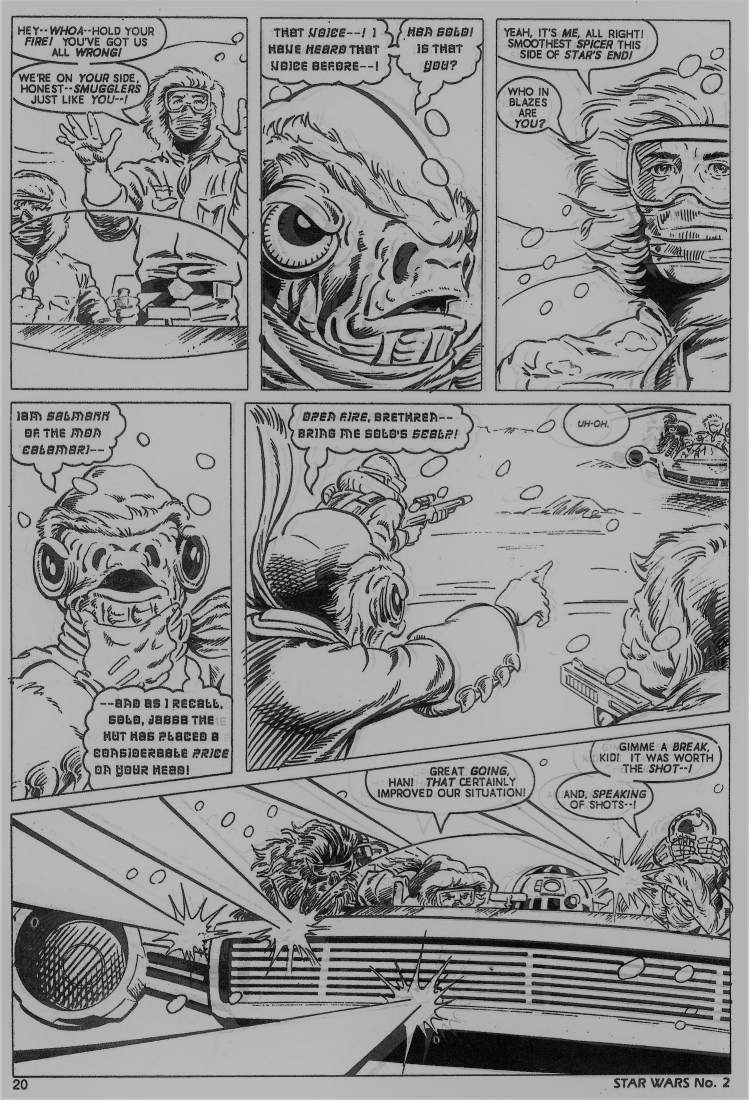 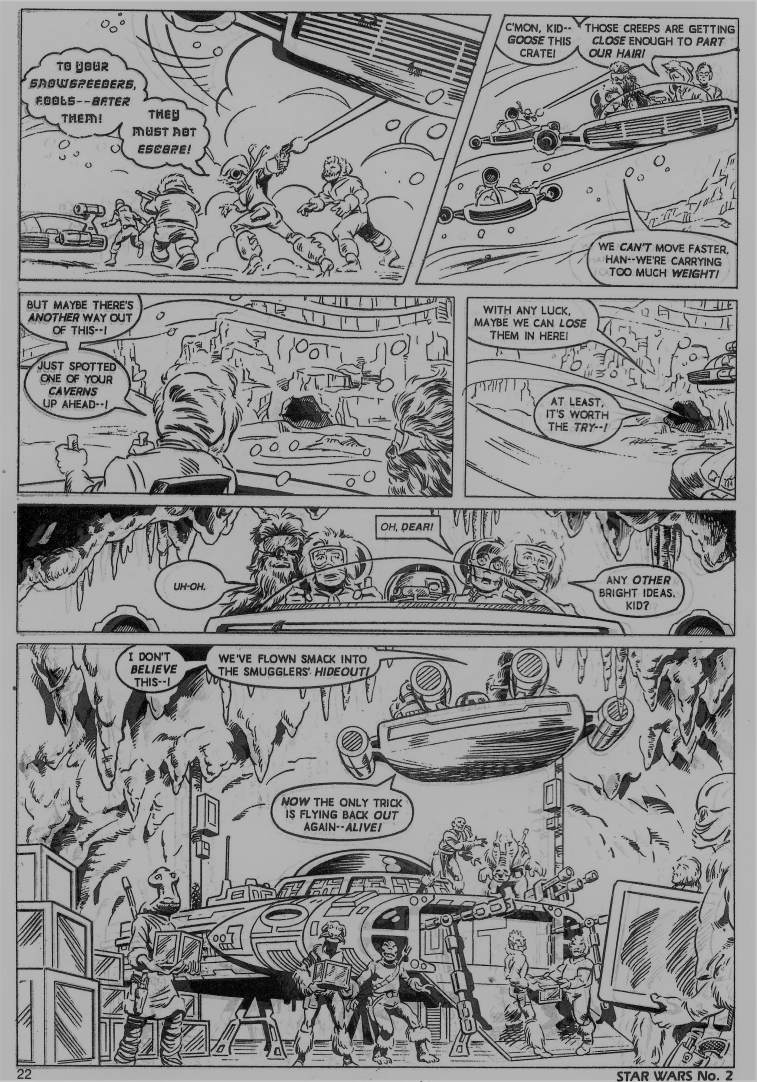 …but quickly find themselves pursued into the smuggler’s cavern / den, which I thought was exactly the type of cave they were looking for to hide the rebel base… 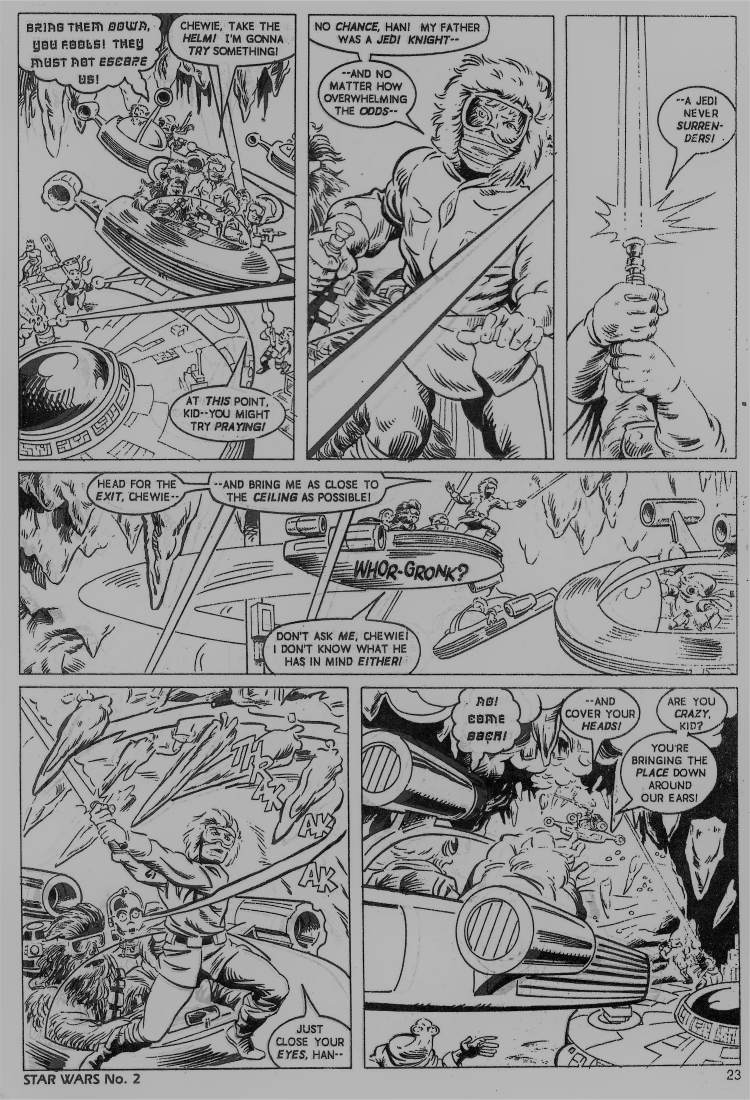 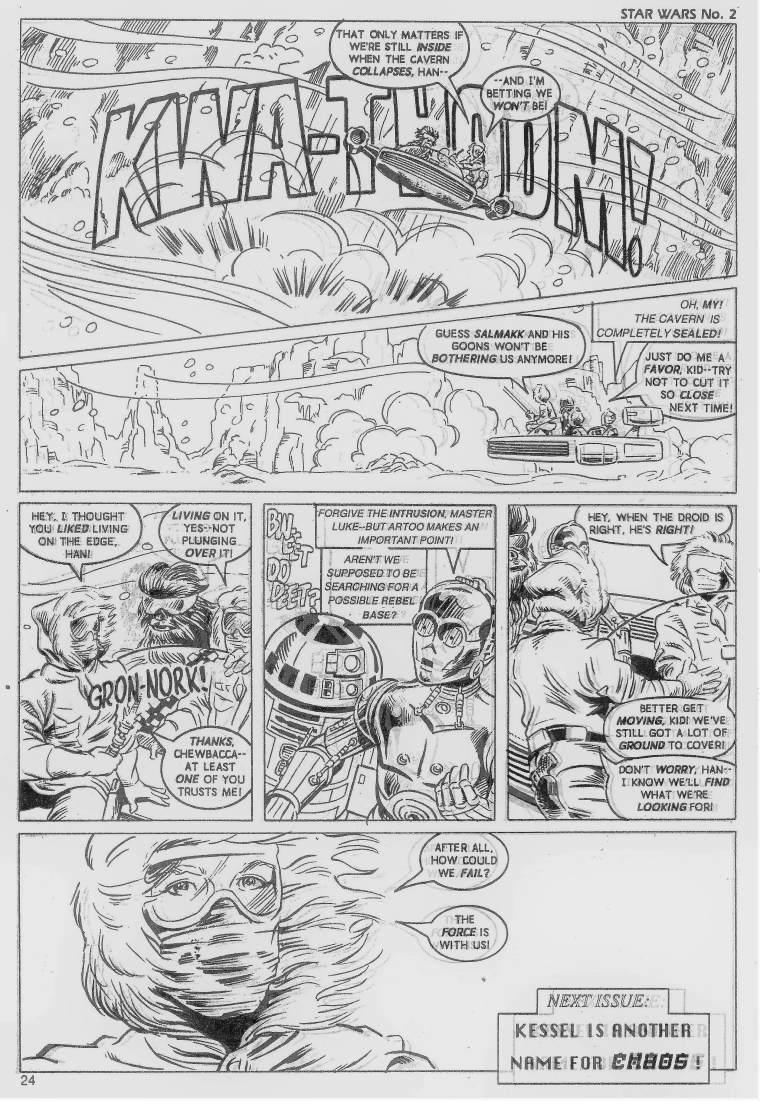 …and which they barely escape from. Or maybe it IS how the find the cave the rebellion uses, they just spend issue #3 clearing out the crushed corpses of the dead smugglers.

But it is here that we take our leave of the Star Wars universe for a time, and I can’t think of a better stepping off point as this felt like a faint tint of nostalgia that tried to fit in all the pieces to a universe I like with some mystery left in it.

While I may be leaving the Star Wars Universe, you don’t have to. The Last Jedi is worth an admission price ticket. Just remember to join us here tomorrow as we unwrap a few more toys before heading into a week of the odd and out there Christmas books.
Posted by SonOfCthulhu at 10:44 AM