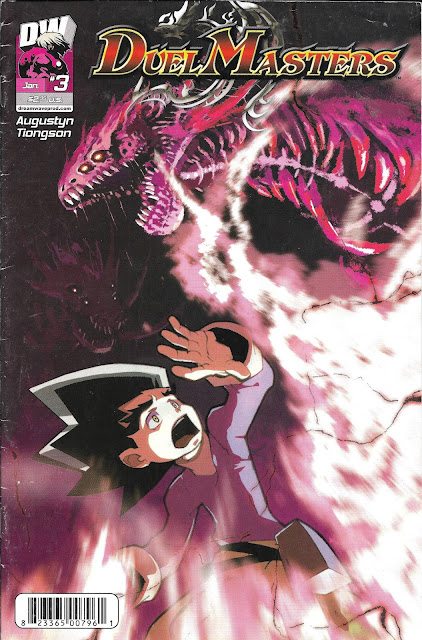 Duel Masters proved the loser in the Pokemon wars 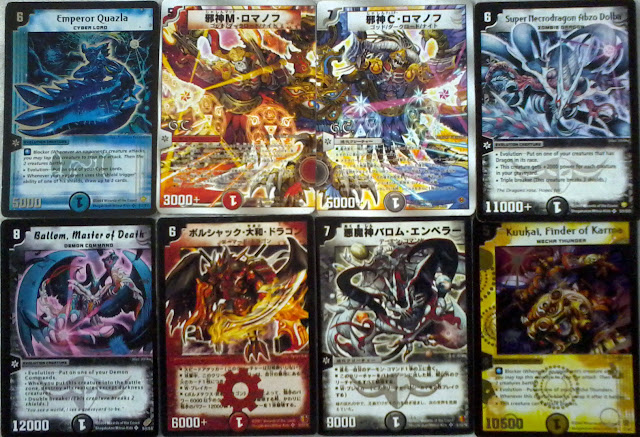 Duel Masters was originally intended to sell in Japan as an alternative trade name for the Wizards of the Coast game Magic: the Gathering. When their Japanese partners started the line off with a manga and anime to indoctrinate the core audience to the rules system they deviated from the standard Magic playing experience slightly. Thus the decision was made between WotC and their partners to create a new card game under the Duel Masters banner instead of trying to shoehorn the changes into Magic: The Gathering’s Japanese version. 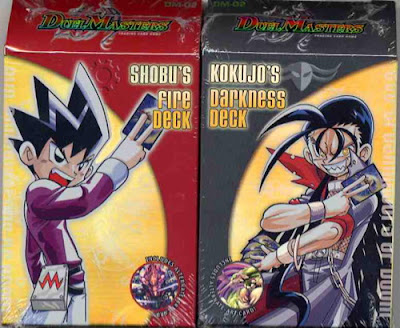 The game was still based around Magic: The Gatherings core rule set. That being one-on-one or two-on-two combat via a collectable card system. But, there were variations about mana production, blocking and power statistics that I won’t pretend to understand. 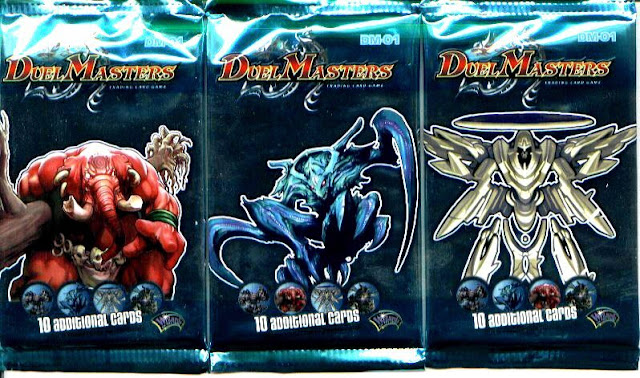 When it first came out in Japan in May of 2002 it went on to become the highest selling trading card game for over a year. Due to these strong sales, WotC brought the thing stateside in 2004…where it underperformed against already established Pokemon and Magic: The Gathering. It fumbled around for 12 quickly produced expansion packs over two years before WotC dropped the axe on it. When it resurfaced again in 2012 with a revised system that wouldn’t work with older cards it met the same fate and went down again in 2014. 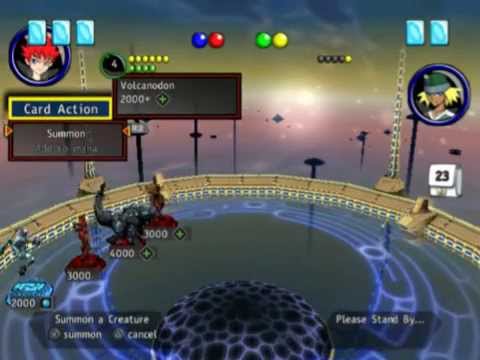 It did get three Japanese manga series lasting 17, 12 and 10 volumes respectfully. The anime got two seasons stateside and a third in Japan only. In addition, Duel Masters produced three Gameboy Advanced titles and one for the PS2. This issue is number three of Dreamwave Production’s very brief Duel Master’s comic book series, a title that was doomed to crash after eight issues. 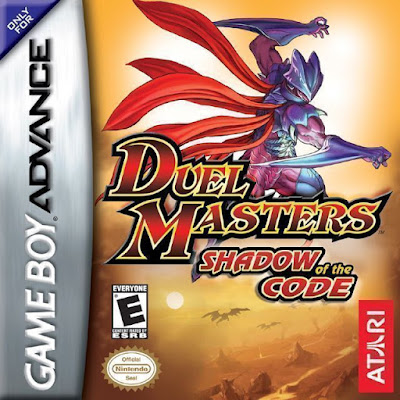 How is it? It’s a bit convoluted, to be honest and it feels like a hard to play card game with a badly translated rule book. It begins with this funky-haired kid laying on the playground in what appears to be a coma. 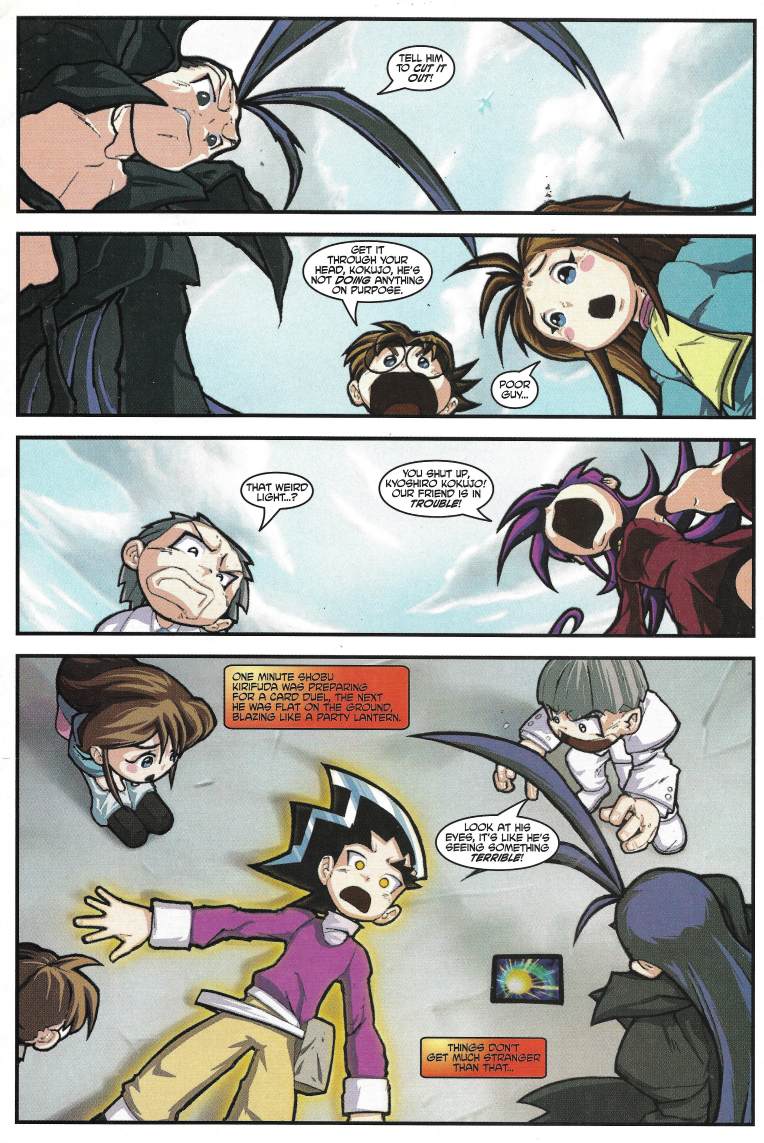 How am I kidding, all these kids have funky hair. The one in the black trench with the cockatoo doo in front and the party in the back is our series bad guy, Kokujo. He was about to play a card duel against Shobu Kirifuda, the kid currently glowing slightly and laying prone on the pavement. Shobu isn’t here right now, Mrs. Torrance, because he’s currently HERE… 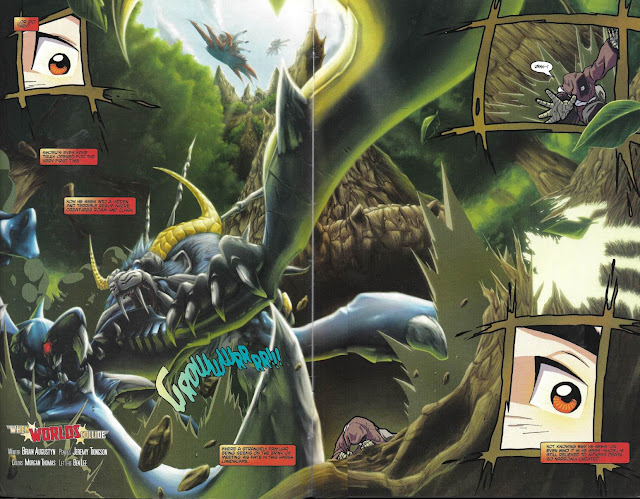 …although that badly lit two-page spread isn’t going to tell me much about those surroundings.

What is important is the dude in the purple robe with the bandaged hands. He survives this attack by this blue creature, which if I was a player of the card game, I might know the name of. But I’m not and the book is sure as shoot’n not going to give me any hints. However is seems obvious that there are two realms at play here: our world and one filled with giant monsters.

However, his trials don’t appear to be over that quickly. He’s dropped to a riverbank below where he quickly becomes pursued again. 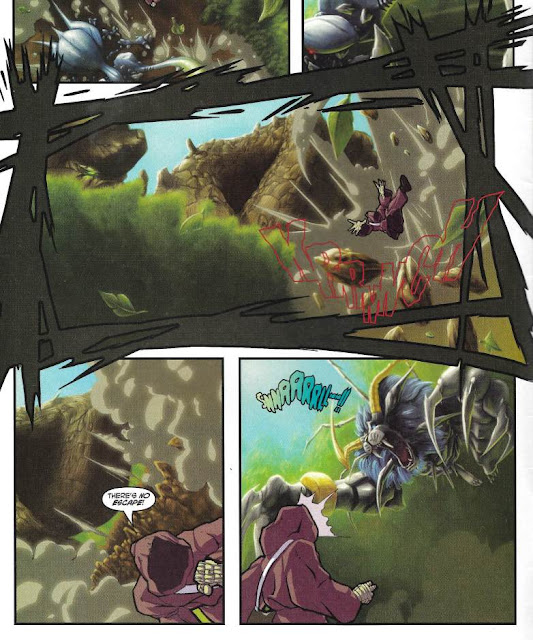 Just when you think his reprieve is temporary, a handful of red mechs show up and ZZZAKKK tall, blue, and angry. 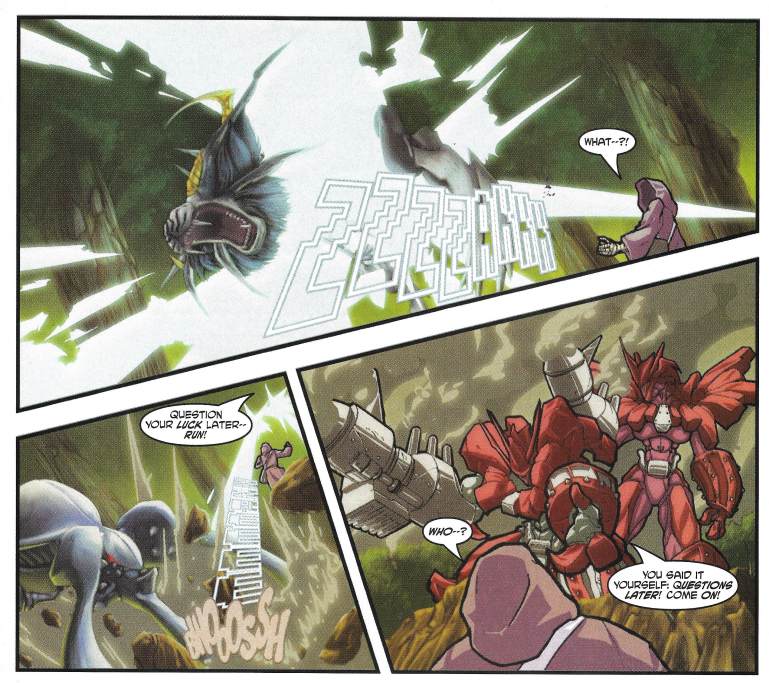 They then state that they have to get purple cloak out of there in a hurry because isn’t that always the way it happens?

As they teleport out to wheres unknown, Shobu wakes up none the worse the wear for having an acid flashback. 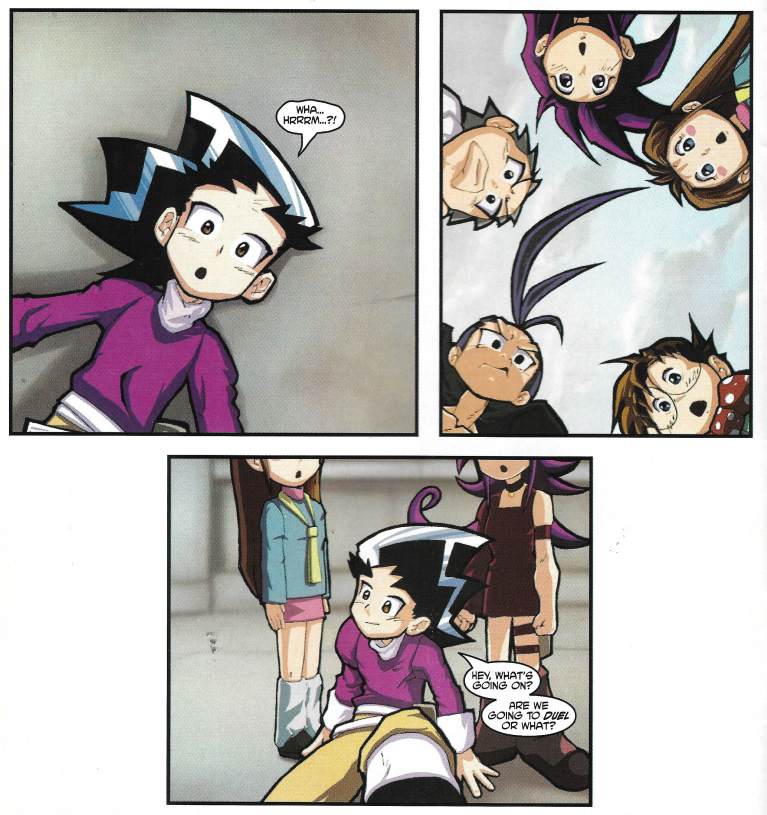 And you think a competitor would take advantage of a recently awoken coma patient who surely isn’t all there yet, but instead Kokujo uses Shobu’s faint as a reason to back out completely. 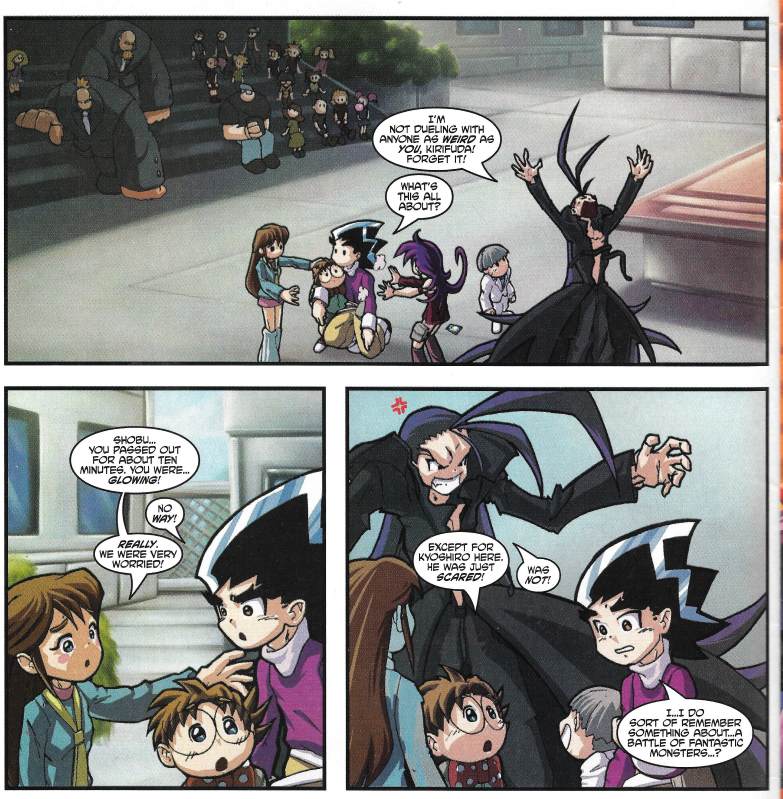 And as Kokujo storms off, the other kids gather around to hear Shobu’s fever dream of being in the world of the Duel Master’s cards. The cards were a gift from someone named Knight, who becomes a mentor of sorts to Shobu. Right now however he has a different enemy to fight. 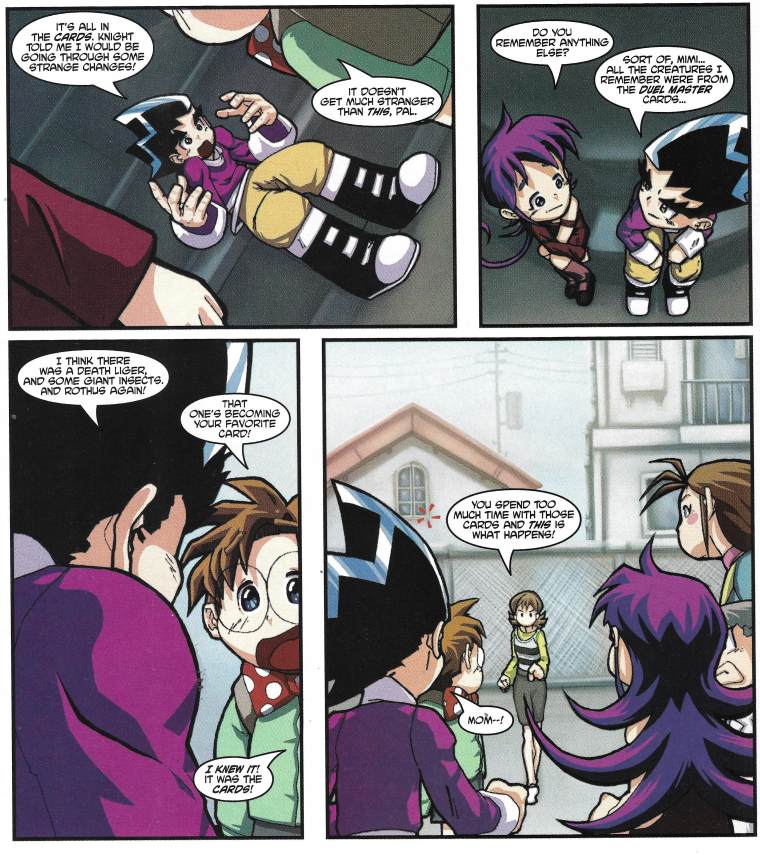 His mom strides on to the playground after having been called by Sayuki Manaka, the brown…er, PURPLE haired girl. She probably becomes a love interest later on. Right now she’s a tattletail who gets Shobu’s mom involved. And Shobu’s mom is super concerned because Shobu’s Dad disappeared under mysterious circumstances and she is very protective of her son. 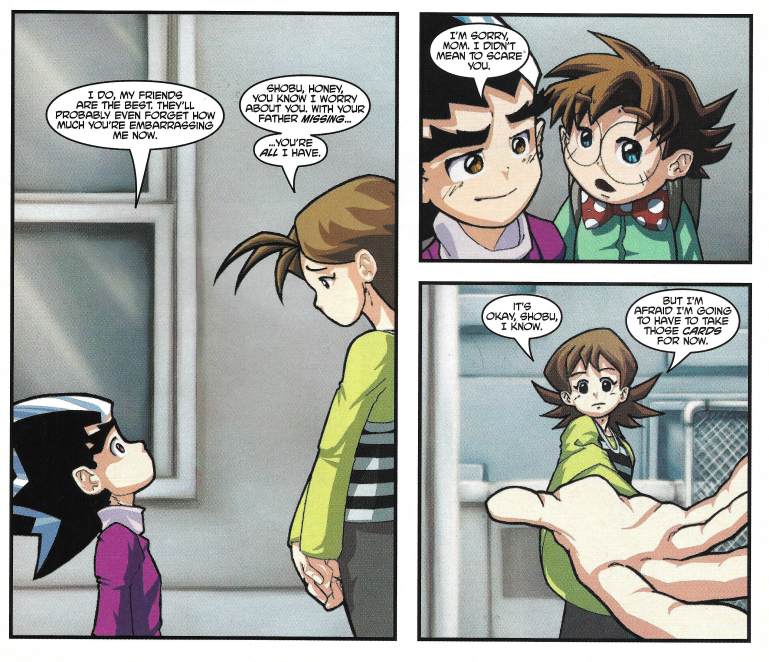 Perhaps a bit over-protective? I mean they are just harmless cards, right?

Also it just me or does everyone in the audience feel like Jasmine from Disney’s Aladdin right now?

Shobu hands over his deck under the promise that his mom not toss them. 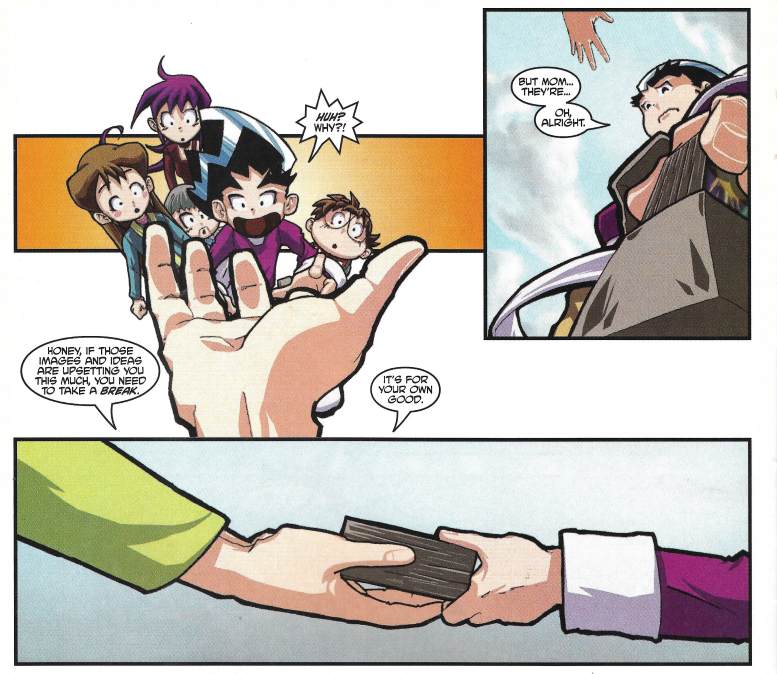 With that, the pair head home and we switch back to our mechwarrior team, now sitting around the table at a very medieval-style pub. The chit-chat about very troubling world events concerning monsters from all the other realms attacking them and barriers being sundered, while the guy they rescued sits quietly. The term him “a stranger from the Outer World” and by that I think they mean he’s from Earth. 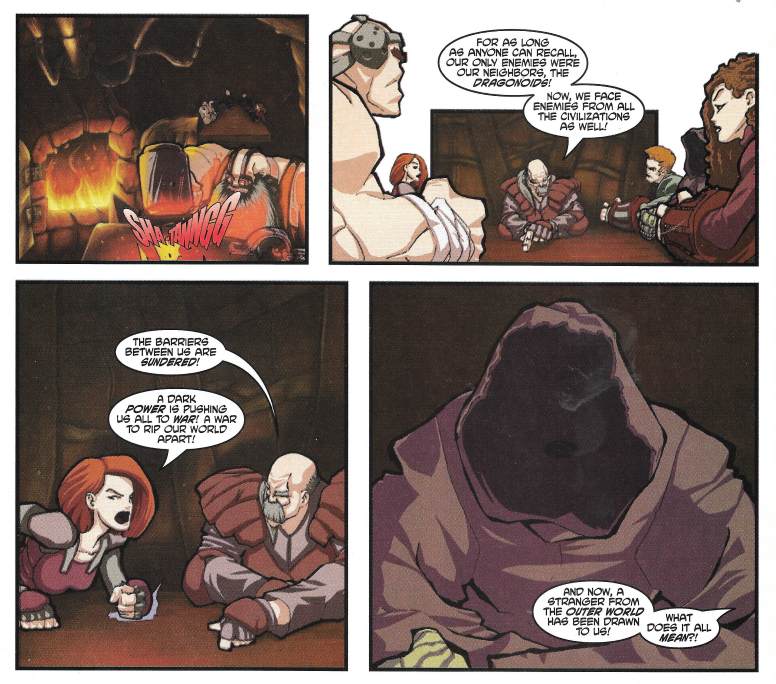 When he finally speaks up, purple-cloak bandaged-hands says he was brought there by a deck of cards, which seems about right. At least it jives with Shobu’s story, especially when it turns out… 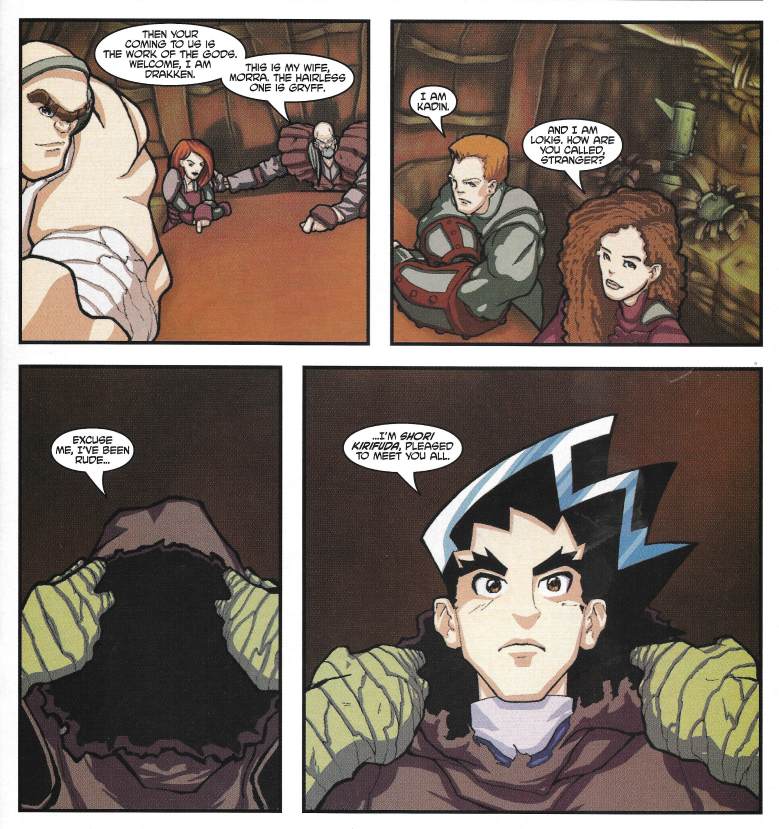 (cue dramatic music)
And as these heroes begin to plan a counter-attack, Shori remembers one person on Earth who might be able to coordinate their forces in a way that saves both. And that person is his mentor, Mr. Knight. 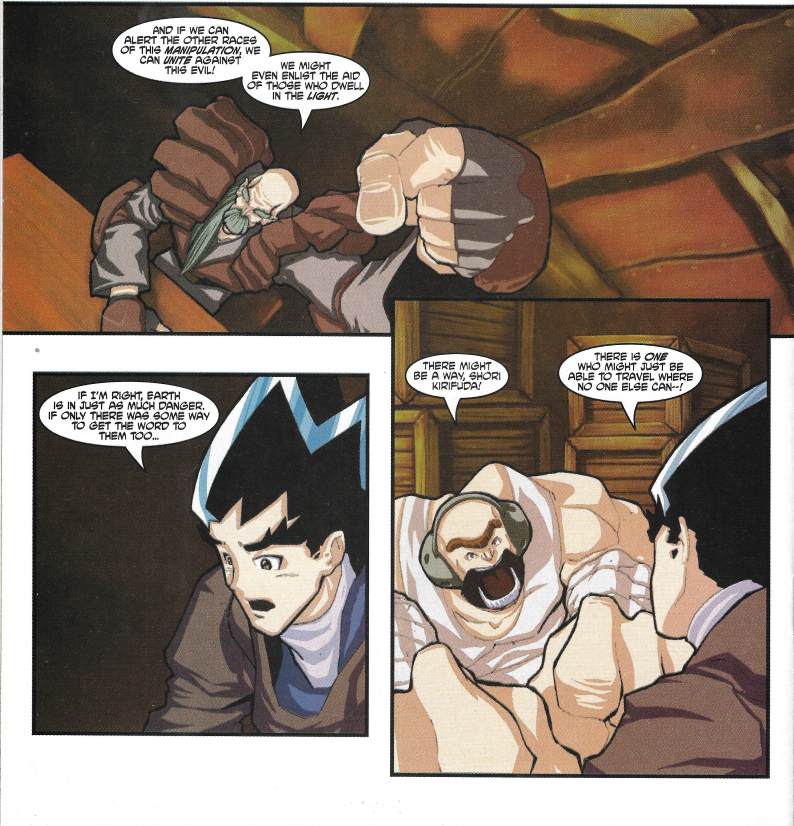 And speaking of Mr. Knight, he’s currently occupied with thoughts of training Shobu as Shori’s replacement… 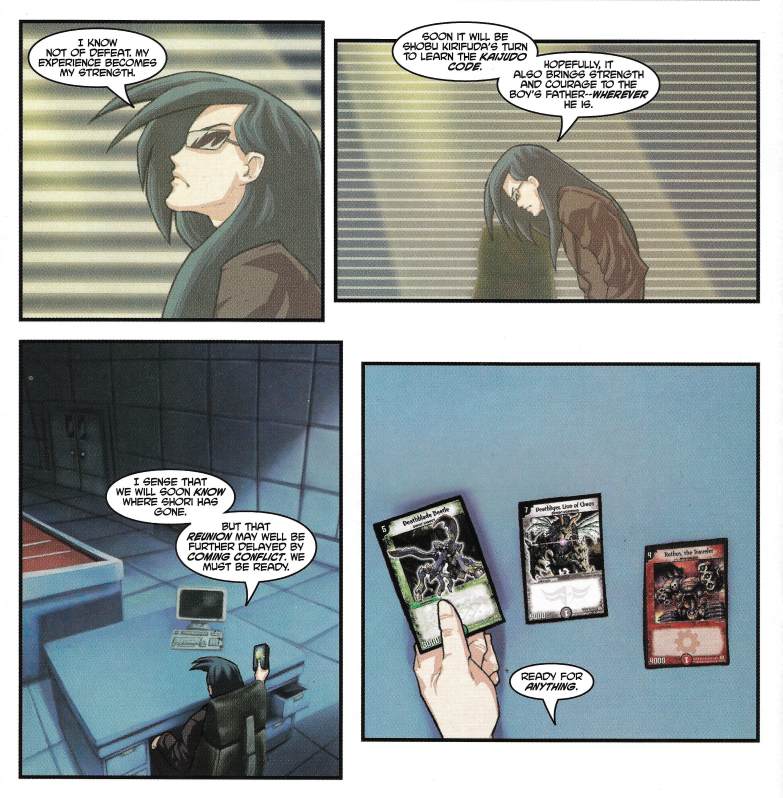 Those look like all evil dark magic cards. I guess only time will tell what Mr. Knight’s game actually is. It certainly comes as surprise when one of the kids from the playground, Mimi Tasogare shows up at his door describing what happened to Shubo that morning. 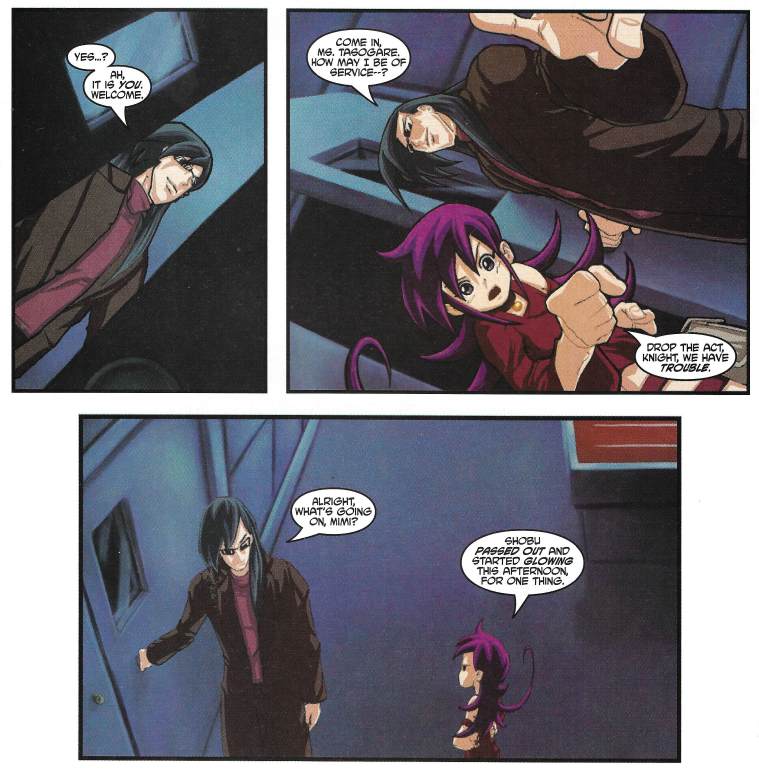 That concerns our mysterious guy who works in what looks like a padded cell, less than the fact that Shubo’s mom took his cards away. He assures Mimi that he will “handle it” and thanks her for coming. 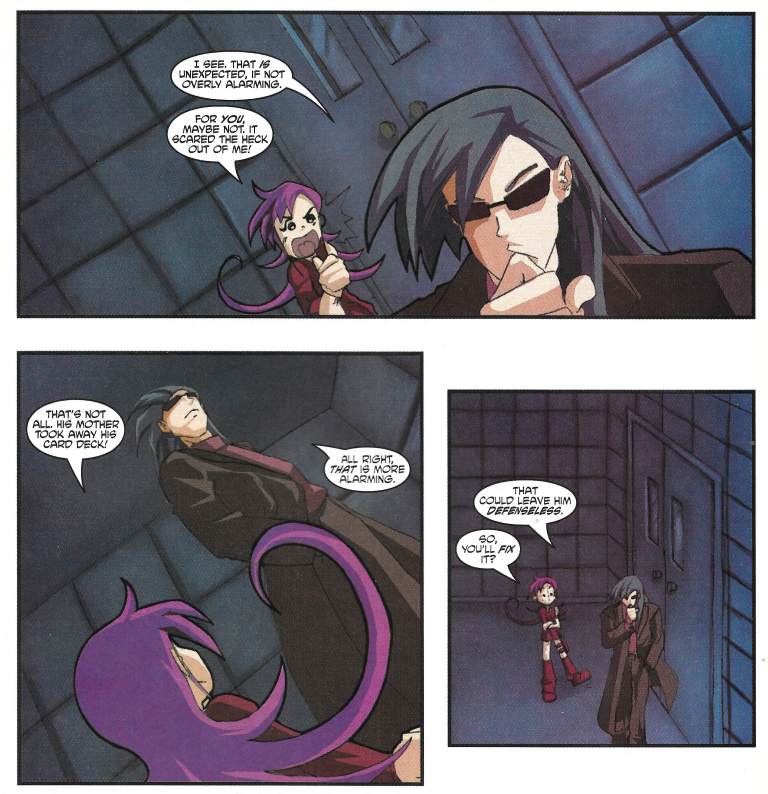 Unfortunately, things start going badly in the other world, as these overly spiky black armored bad guys appear lead by someone who looks like the worst parts of Loki and Hela combined. 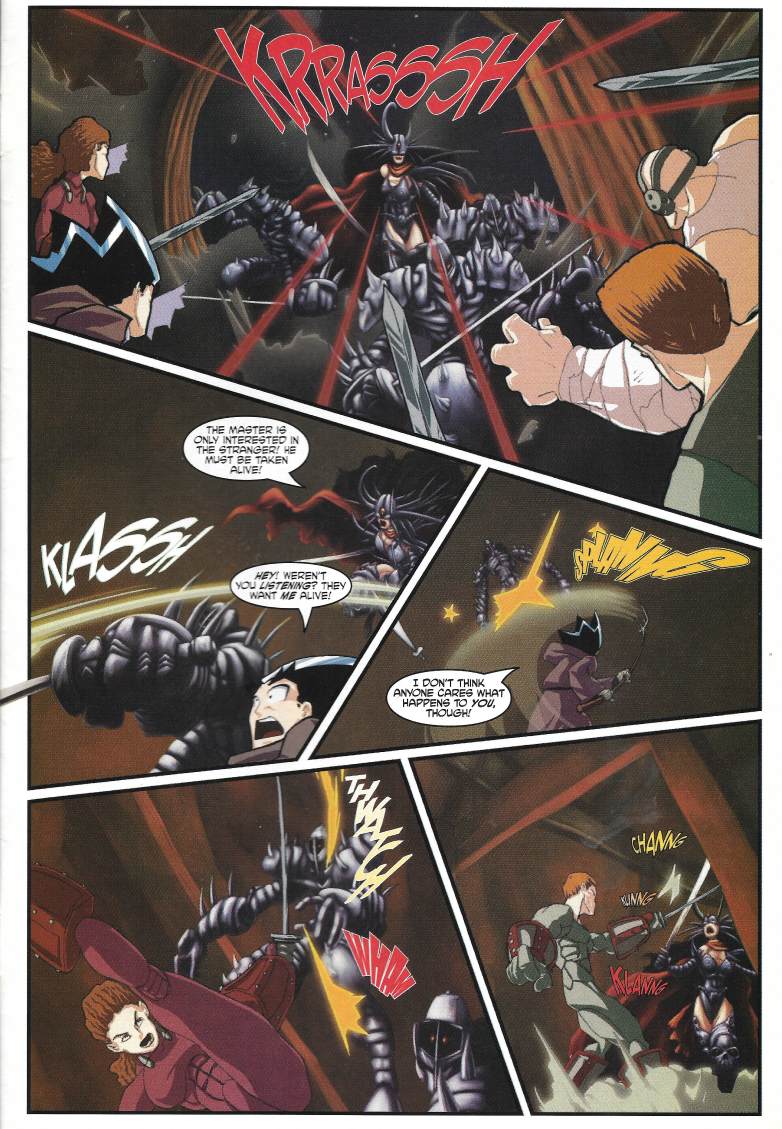 They make quick work of the good guys and threaten to kill all of the hostages if Shori won’t come peacefully. 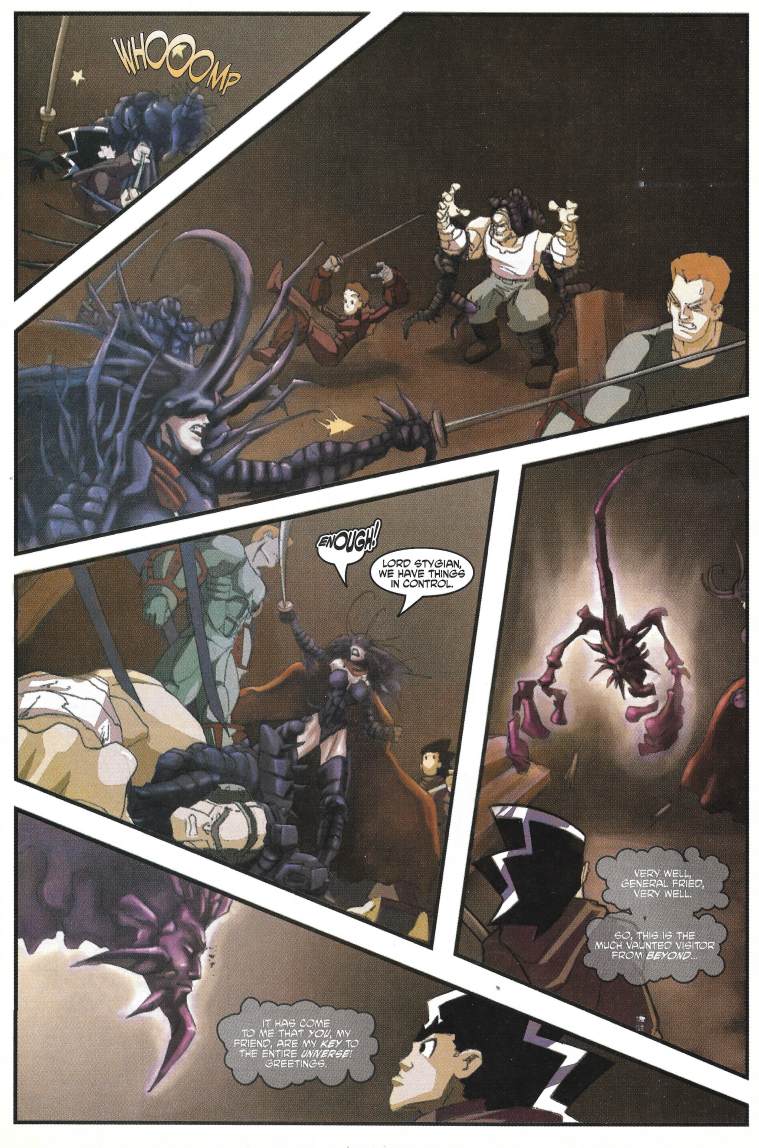 Shori relents and it appears this pink faced glowing thing really wants him as a link back to Earth. 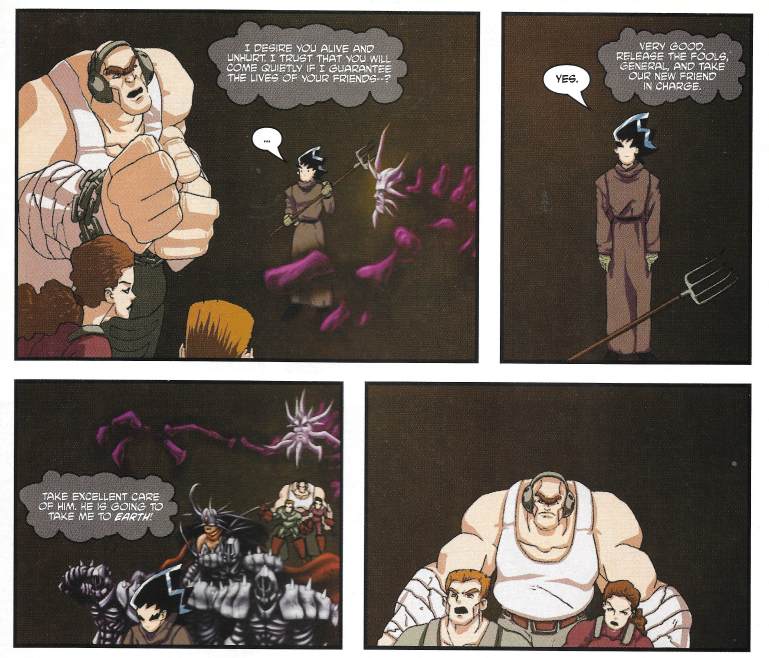 An Earth where Shobu keeps slipping in… 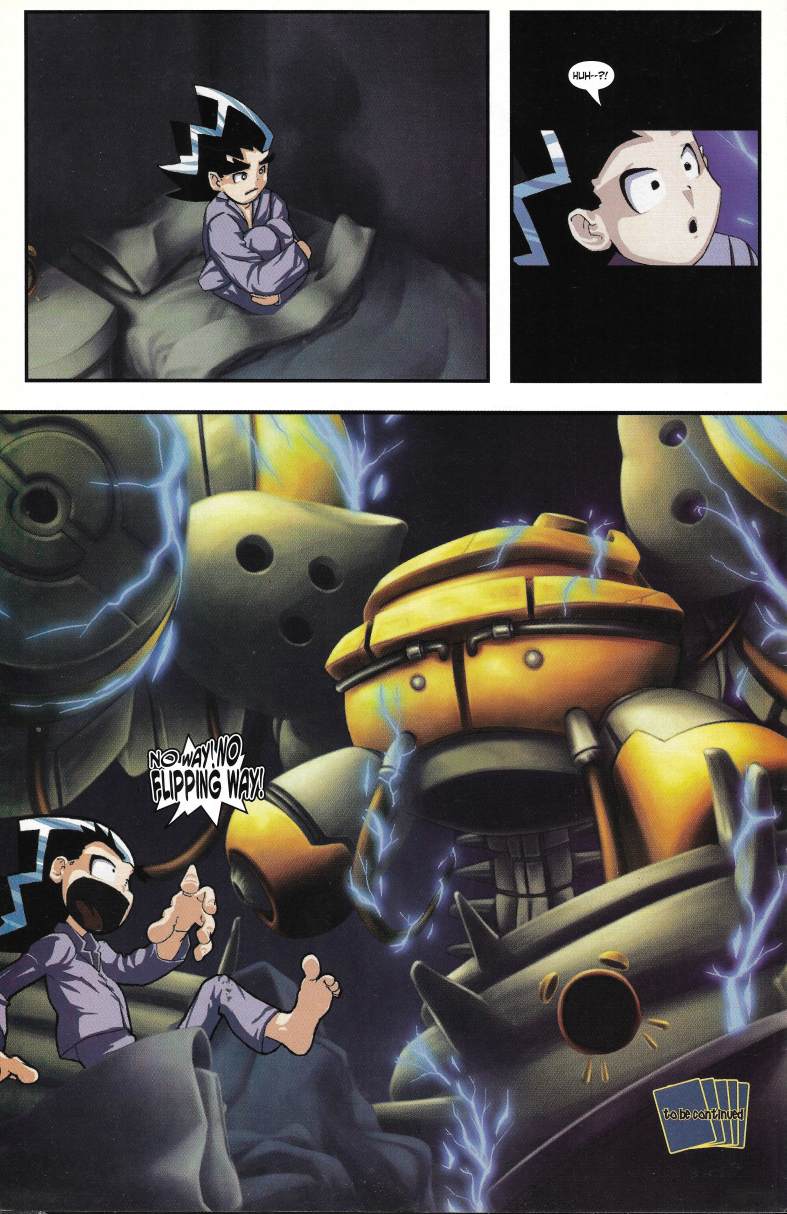 …and out of with no way to control the passages. And that’s where we end.

There’s not much here to really critique and if I did, I’d feel much like kicking a down dog. How crummy is it to be out of business within two years of starting? It doesn’t help that you are competing with your own product either. What was WotC thinking when they did this. Magic: The Gathering game looks like a mature, older person’s two player collectible card game. And while Pokemon has layers of playability, it is much more kid friendly than M:tG.

Duel Masters looks like the complexity of Magic with the character class of Pokemon. So it will be too hard for the younger enthusiasts and to cartoony for the older set.

Or maybe it just needed to be said that what works overseas doesn’t ALWAYS work over here. Sometimes common sense should step in and say “Stop”.
Posted by SonOfCthulhu at 3:09 AM