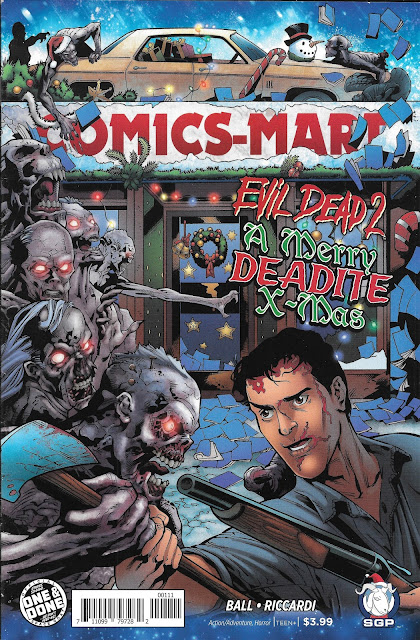 Careful last-minute shoppers, this Christmas sale is a killer deal

That’s what this one shot initially led me to. Head-scratching confusion. Long a fan of Sam Rami and Bruce Campbell’s Evil Dead films, I know quite a bit of the history of Ash William’s screen adventures. The comics books adventures, however, were a bit of a mystery to me.

And yes, I did dip my toe in Ash’s comics back in 2007 for Freddy vs. Jason vs. Ash. I mean c’mon! Who wouldn’t?. Aside from that short-lived mini-series I didn’t partake, given that much of the screen series charm revolves around Bruce Campbell’s charisma and how he portrays the lovable goof Ash Williams, who continually gets sucked into the weird-horror world of the demon-spawned deadites.

When I picked this up I had no idea how it fit into the movie continuity or the books. I do know that there were things that caused immediate questions though. Like Ash has two hands. And who this chick is he’s running around with who appears to be Annie Knowby, who should be quite a bit less…alive.

Rather than give you a dose of my confusion, I’m going to clear the decks and lay it all out for you, courtesy of this handy little page from Deadites Online.
The first book series out of the gate were created by a completely different publisher, Dark Horse Comics, which were adaptation of the movies. Dynamite picked up the Army of Darkness licensing in 2004 with a four issue mini-series entitled Ashes 2 Ashes. The company published these through Devil’s Due, who rolled out thirteen issues in six different series that allowed Ash to enter the Re-Animator universe and to face off against classic universal films monsters like Dracula, the mummy and Frankenstein’s monster.

Ash then crossed over to the Marvel Zombie universe then spun back for another unlimited series lasing 27 issues. The Army of Darkness books got crazy with tie-ins then, with Ash meeting Xena (three times), Vampirella, Hack/Slash, Danger Girl, Darkman and saving President Obama. It also went through three different soft reboots, where previous series ending were dropped in favor of the new series beginnings.

In 2015 Space Goat publishing picked up the rights to Evil Dead 2, the film that came before Army of Darkness and began publishing Ash’s adventures between the two movies. Kind of weird concept since there was no noticeable gap in Ash’s in movie timeline between the two, but hey…whatever works guys.

That’s where we start to come in and clear up a few things. The Ash in these books is a “copy” made from the hand that held the dagger that stabbed Annie at the end of Evil Dead 2. She obviously survived that (somehow) and the pair are now trying to set all the things her father’s meddling with Necronomicon have set loose. (I see here the release Cthulhu in Dark Ones Rising series prior to this comic. THAT is one I will keep my eyes out for.)

With that extra-long intro, how about we jump into the book proper. Oh! And check those feel-good Christmas spirits at the door. This book is pretty much a monster tale and the only spirit you’ll find here is an Evil Dead one. Let’s get to it!

We begin with Annie and ash wandering the chilly December streets dressed exactly as we saw them last. The world looks kinda vacant, but I’m not sure if that’s artistic license or if something is up. Here also Ash tries to exposition us into WHERE we are in this universe, which he gets pretty close to doing. 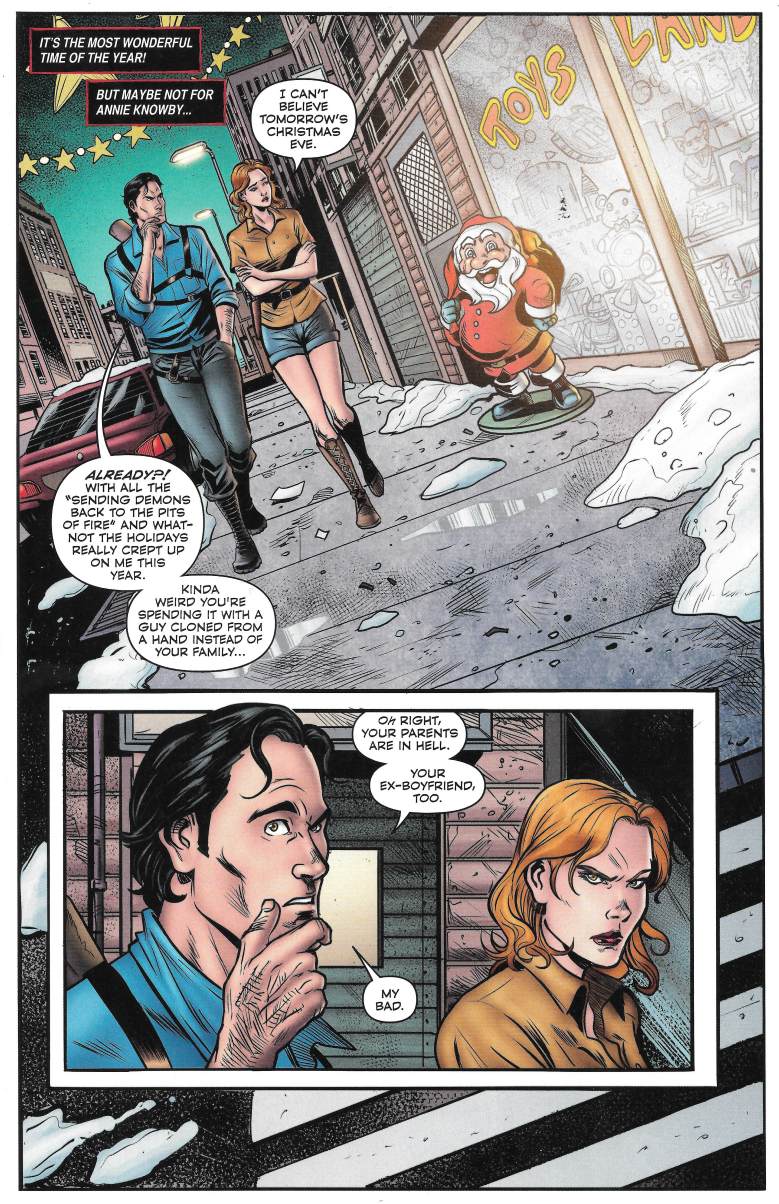 He hurts Annie’s feelings and she stomps back to their hotel leaving him on the sidewalk. It’s important to note that right out of the gate we have to give a character on the page the emotional resonance that Bruce Campbell brings to the role of Ash Williams. That isn’t an easy thing. Campbell has a charm and wit to make Ash’s late-series insensitive, macho-man idiot someone endearing in his obnoxiousness. 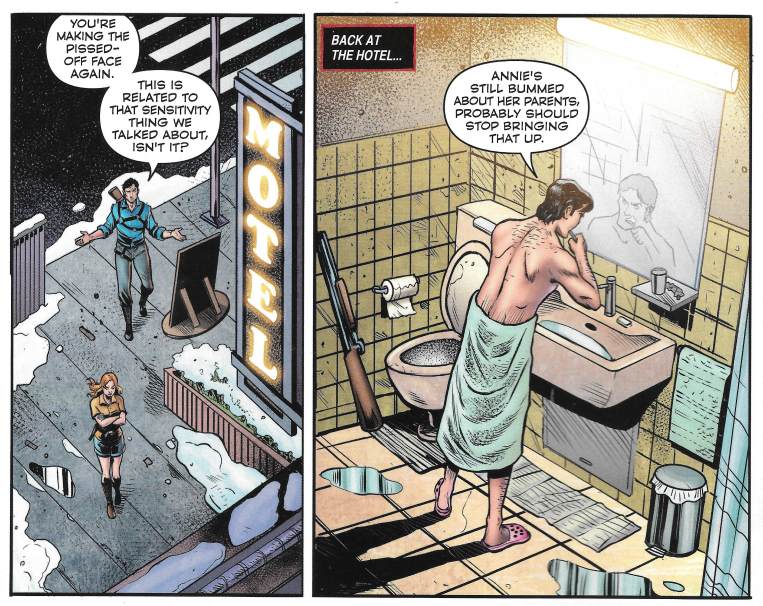 The book does a fair job at it, enough that I let down my guard and start to check my reservations at the door. This is an Ash I can see Campbell portraying.

As I settle in, something appears to Ash during his bathroom activities… 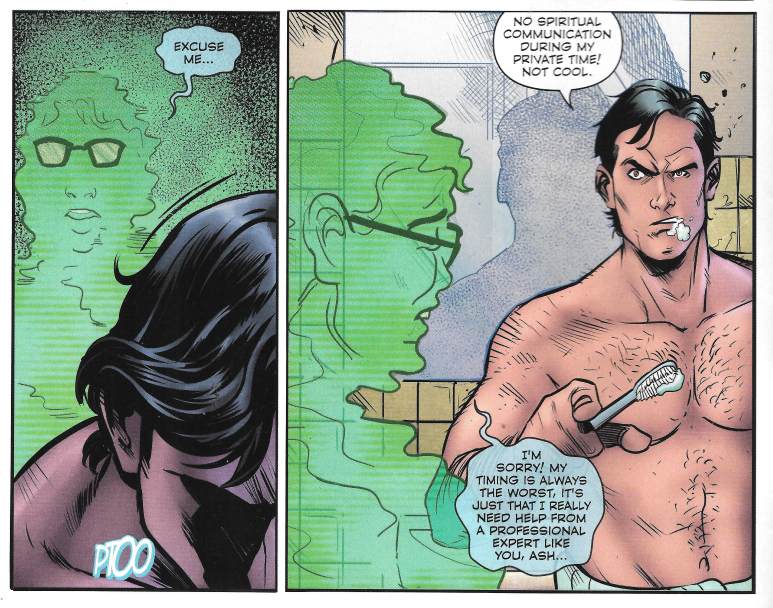 Meet Robbie Dawes everyone. He worked at the year-round Christmas theme part outside of town and because of his screwup, released a Deadite menace. He’s sought out Ash to help, which elicits Ash’s typical response. 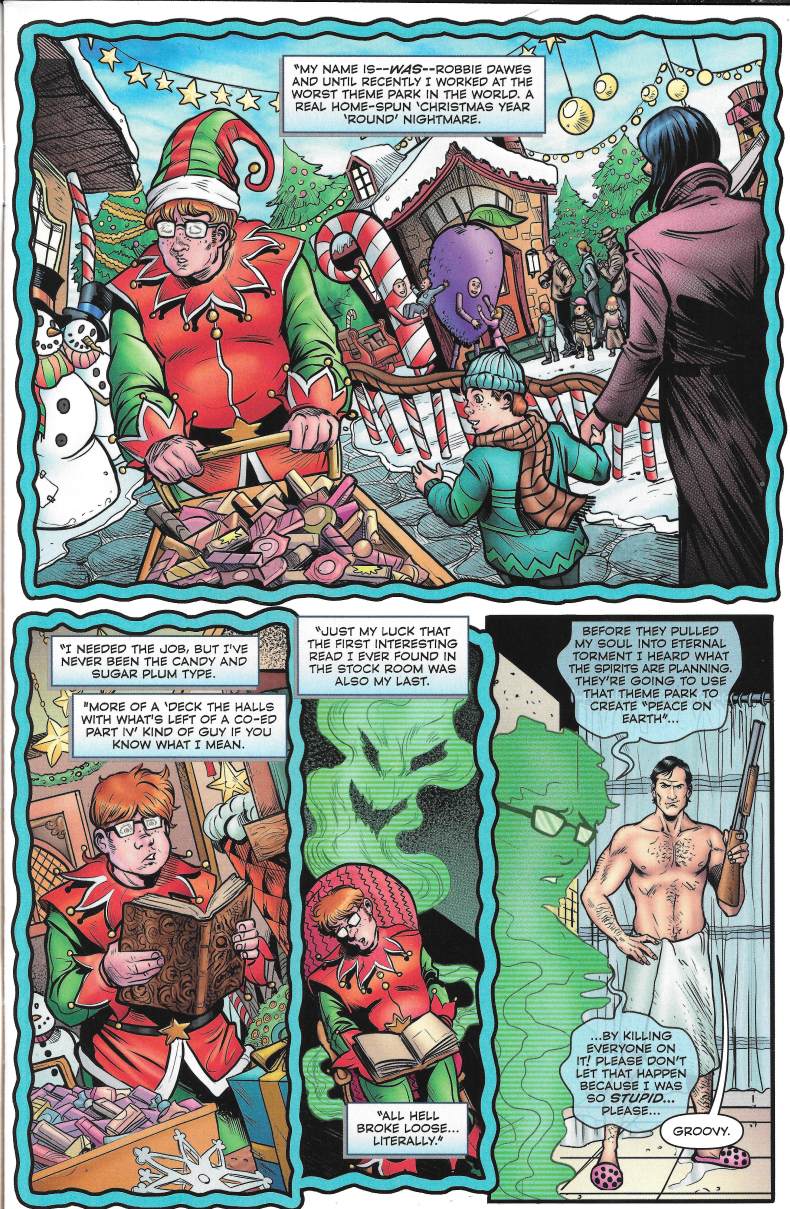 It is interesting to note that I’ve always seen Ash’s bravado as a symptom of his having endured so many horrors. I view it as a coping mechanism that he has reverted to in order to survive. He certainly wasn’t that brash and ballsy in the first Evil Dead movie, but the madness and the monsters have taken their toll on him mentally leaving only a shell that has to keep emotional distance to survive. 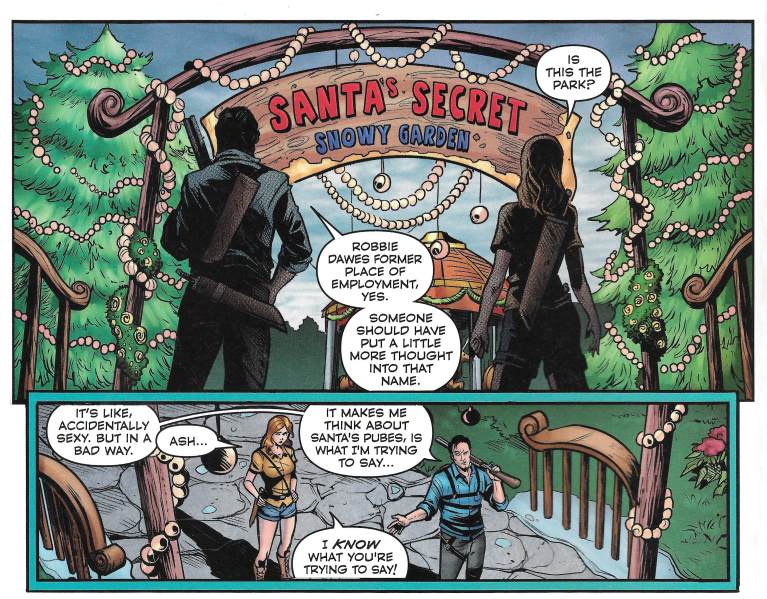 Or reducing him to a teenage boy. Whichever. 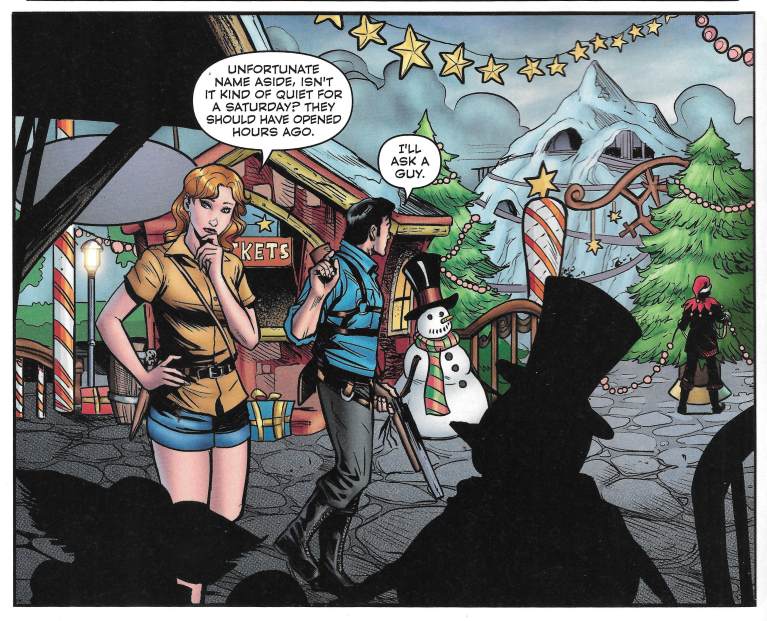 I like the gruff exterior the writer is using for Ashe’s dialogue choices. It works for me, especially given that this is going to be where the crazy part starts. And Ash knows that. 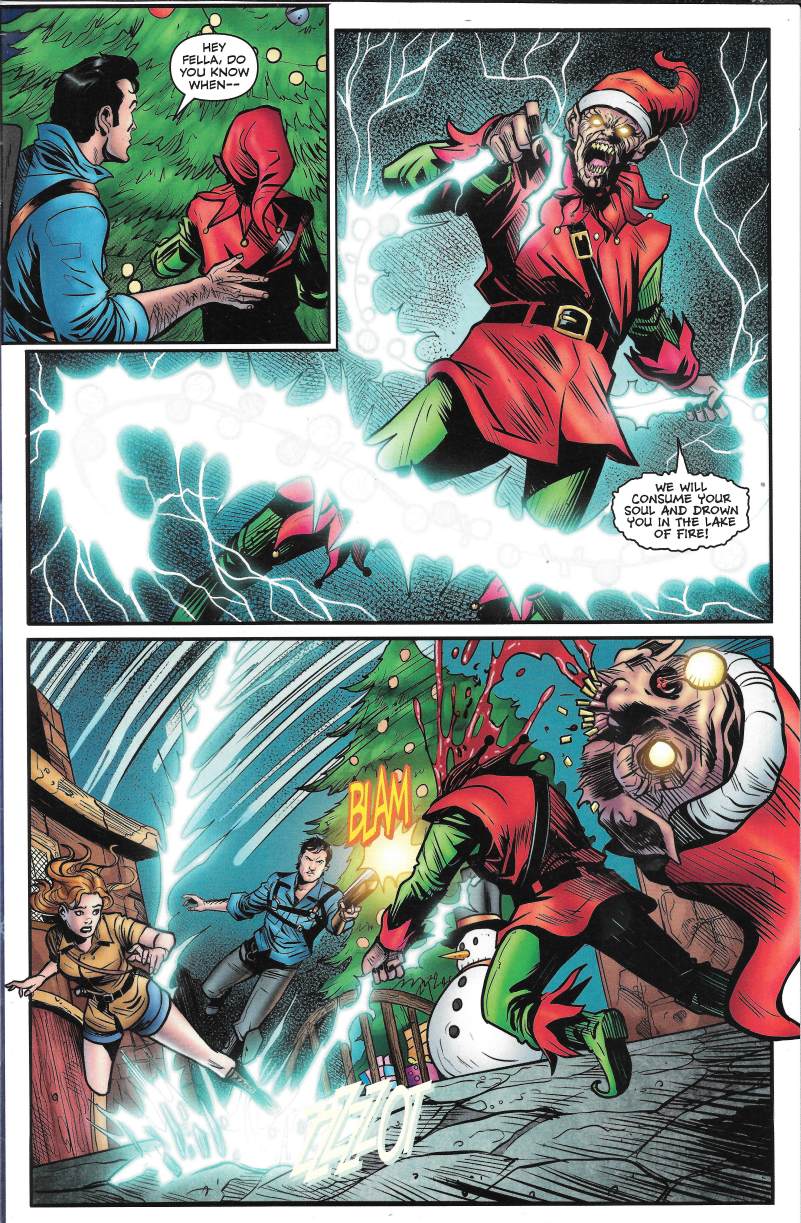 Right on schedule. Our elfin deadite gets a shotgun haircut and our pair are now certain they came to the right place. Annie hears a child’s cry coming from a nearby ride, so she rushes over only to find… 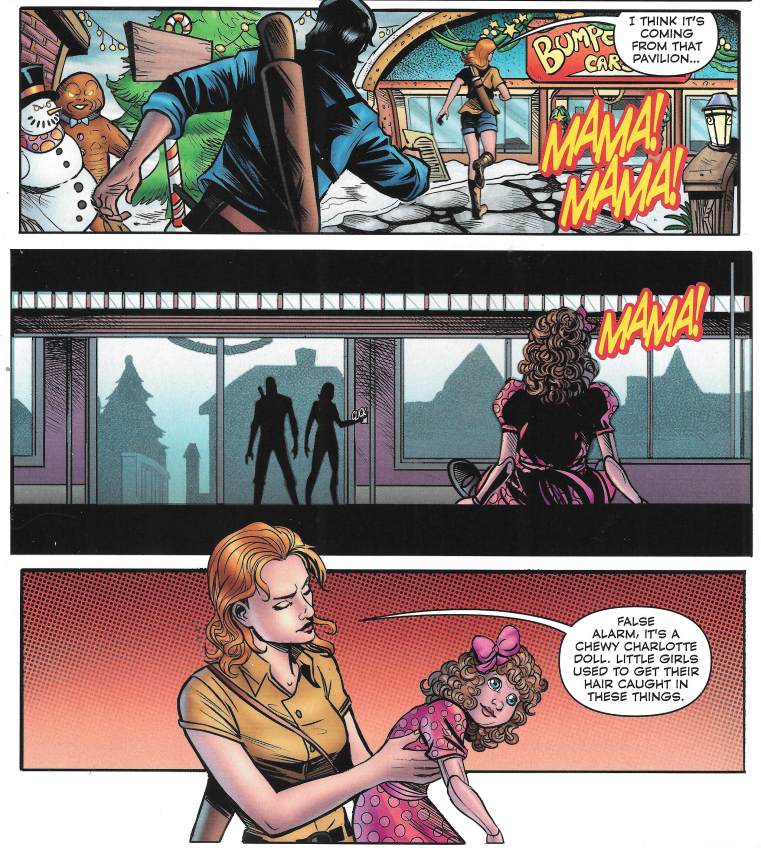 …a deadite trap, as both the doll and some crazy human-sized gingerbread men appear possessed. And those gingerbread men are about to play a Mad Max version of bumper cars with Ash and Annie. 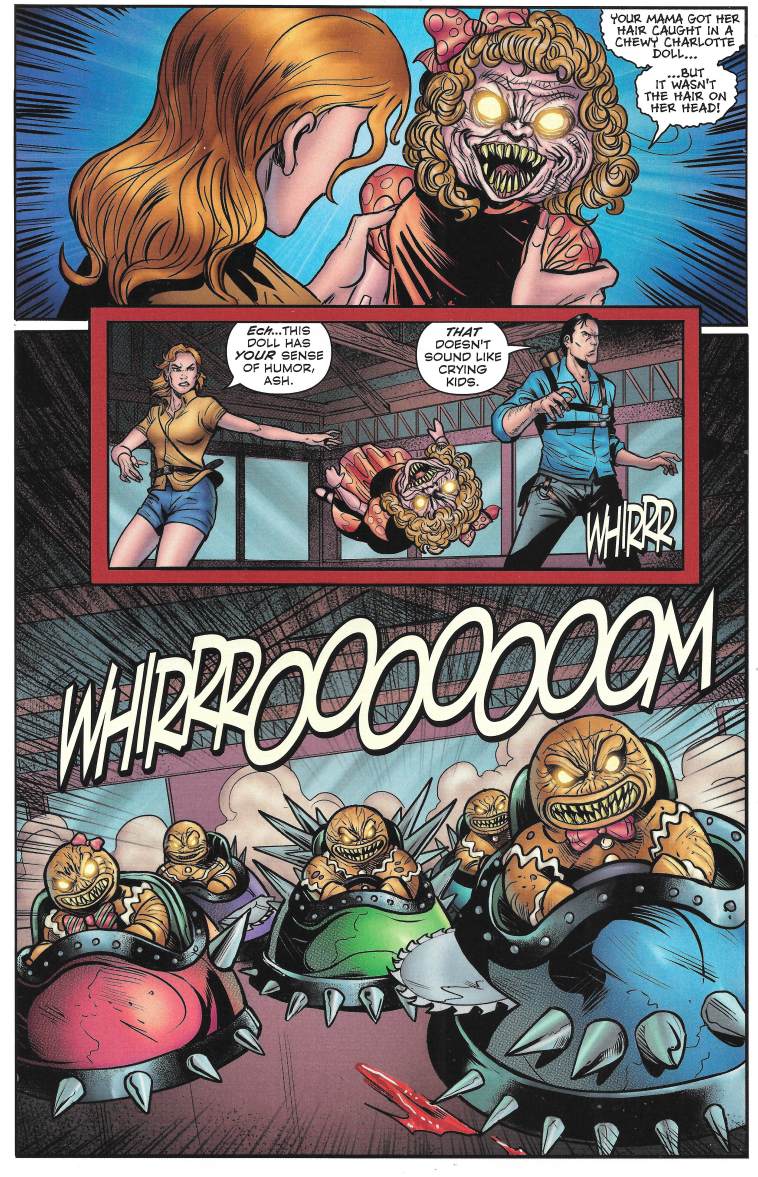 After a few dodges, the couple are cornered and in trouble when help unexpectedly arrives… 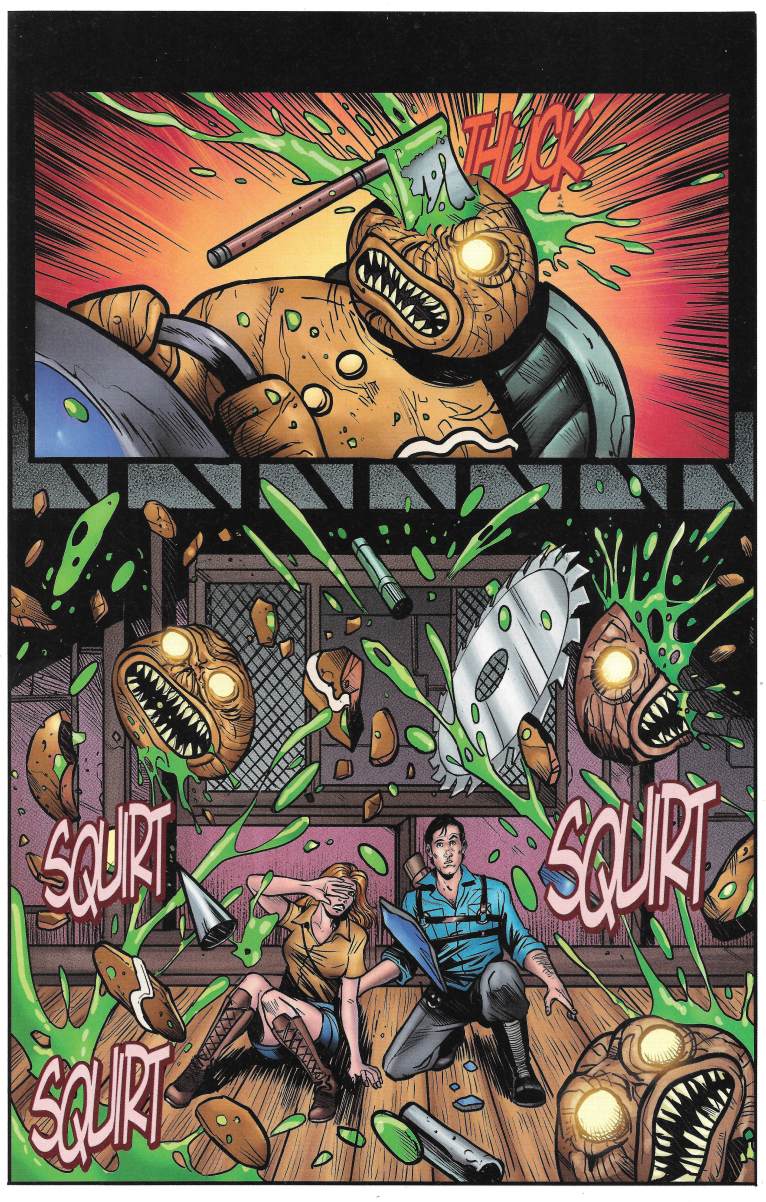 …to save them. But it isn’t coming from whom you’d expect. 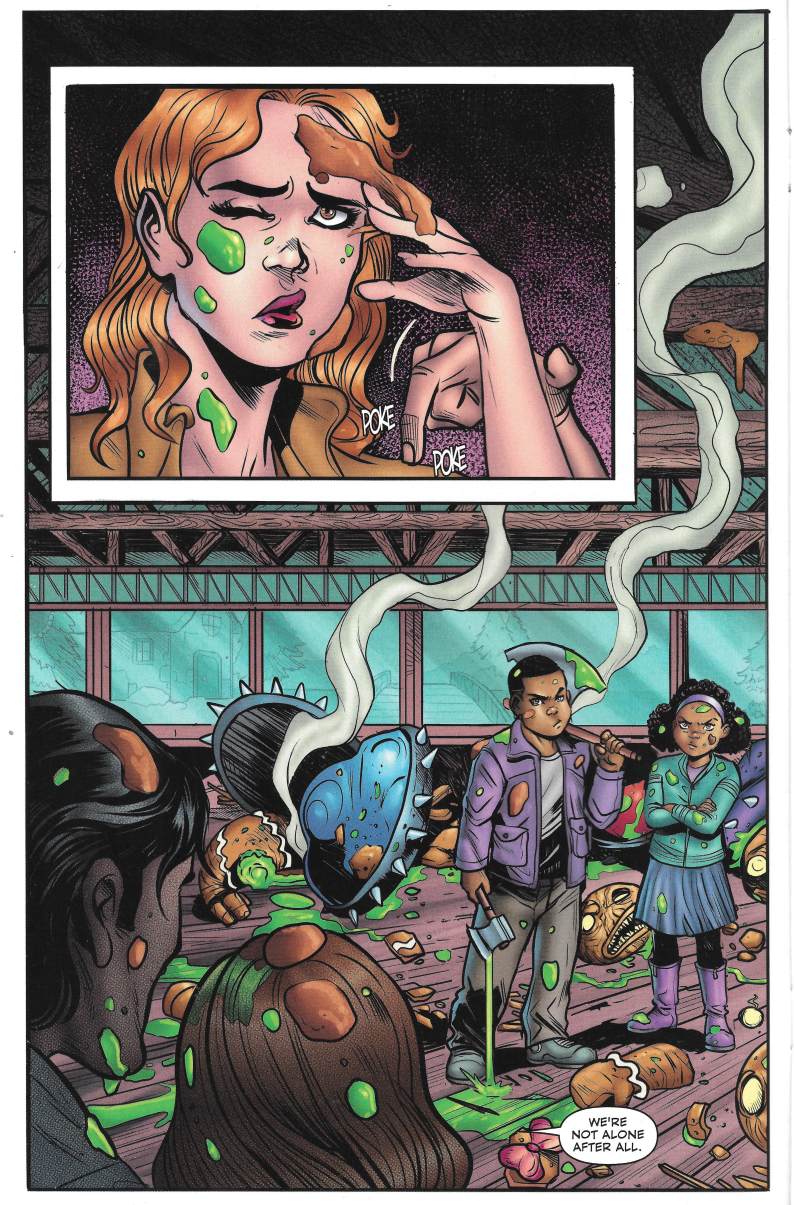 This is David and Colette, abandoned here by their Uncle Charlie. Annie trusts them instantly but Ash takes a little convincing. 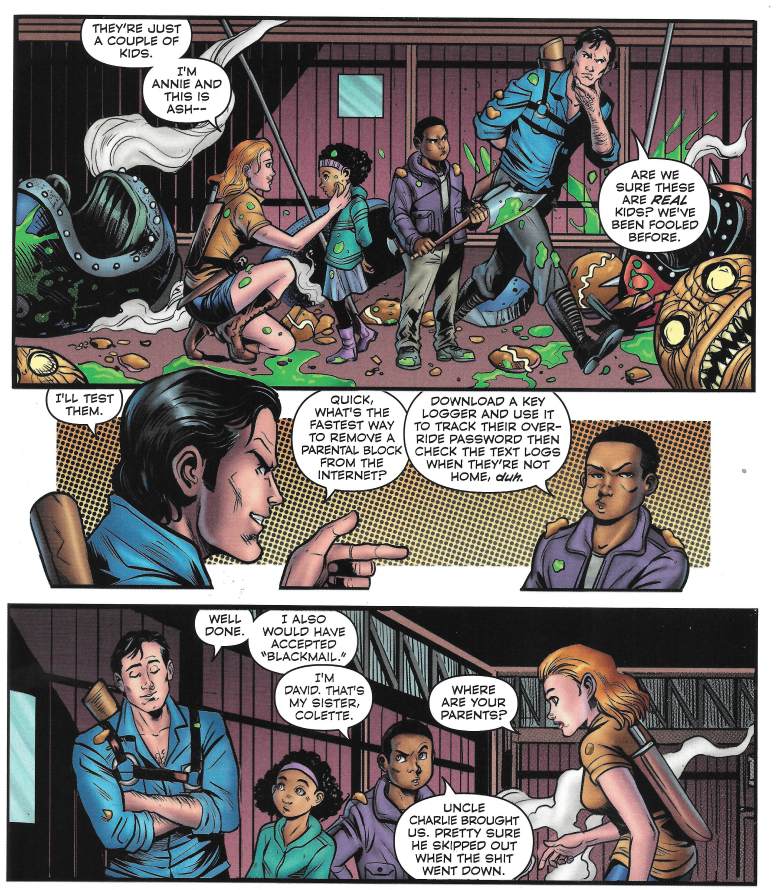 The kids’ presence turns this from cleaning up Robbie Dawes mistake to a rescue mission and the nearest path out of the park leads through a food court. 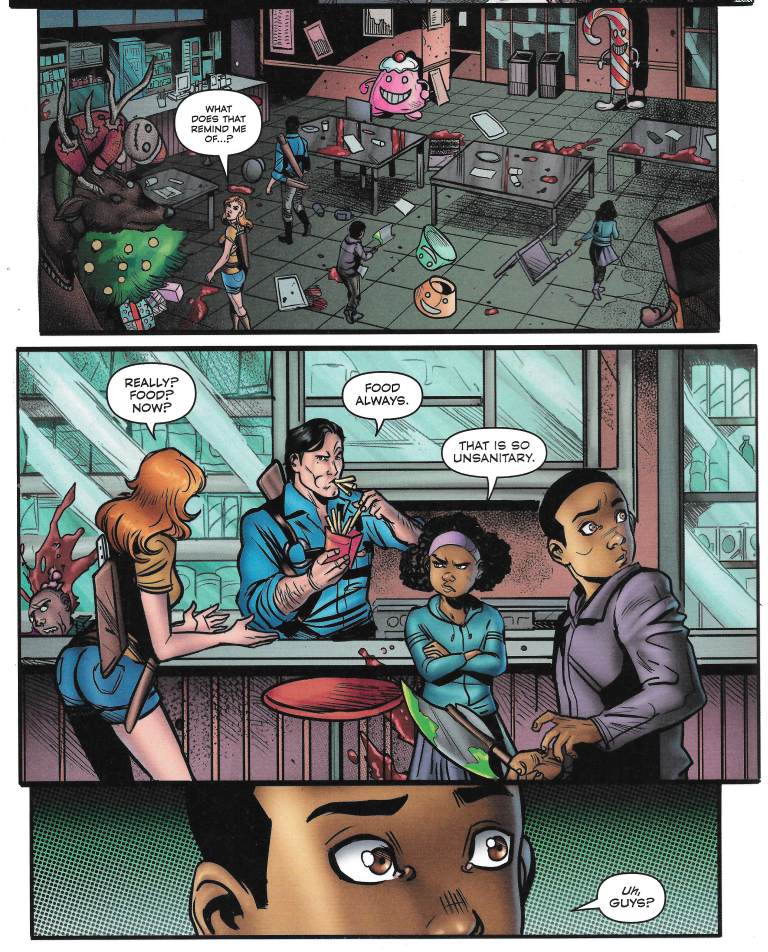 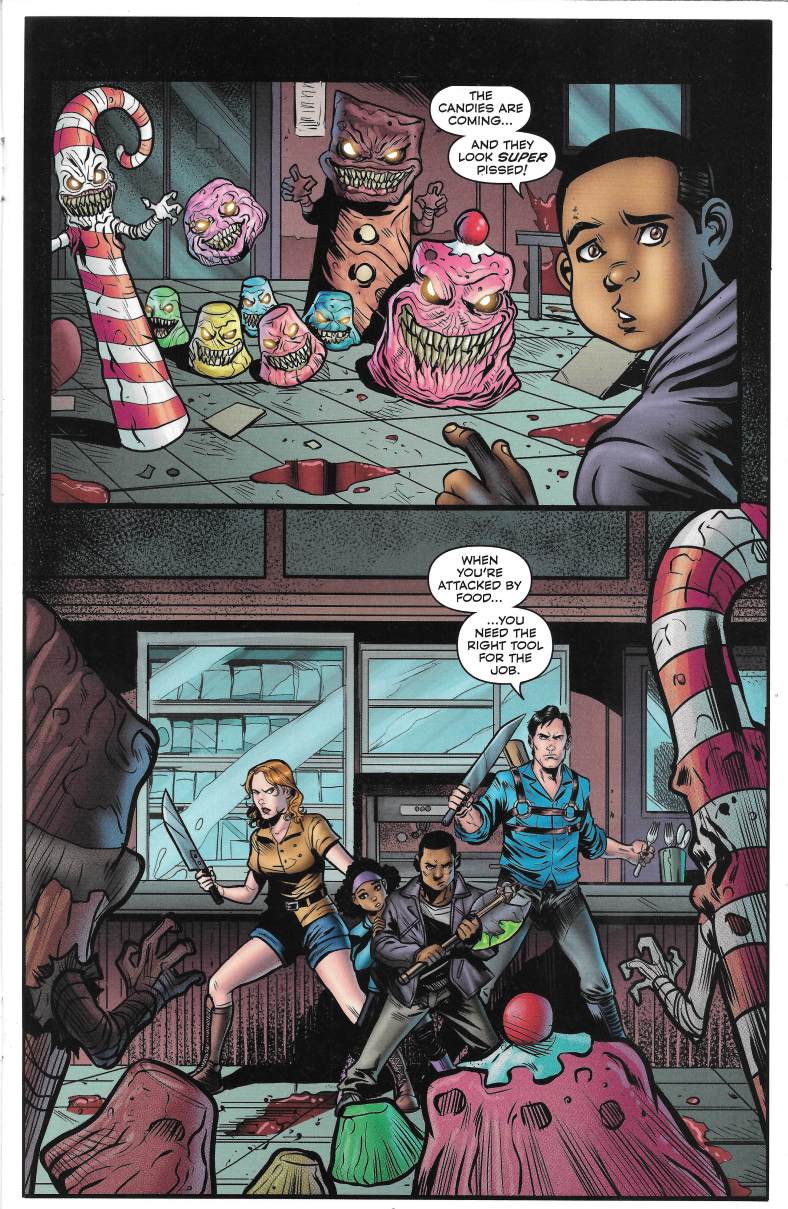 Leading to lots of demon-fighting fun… 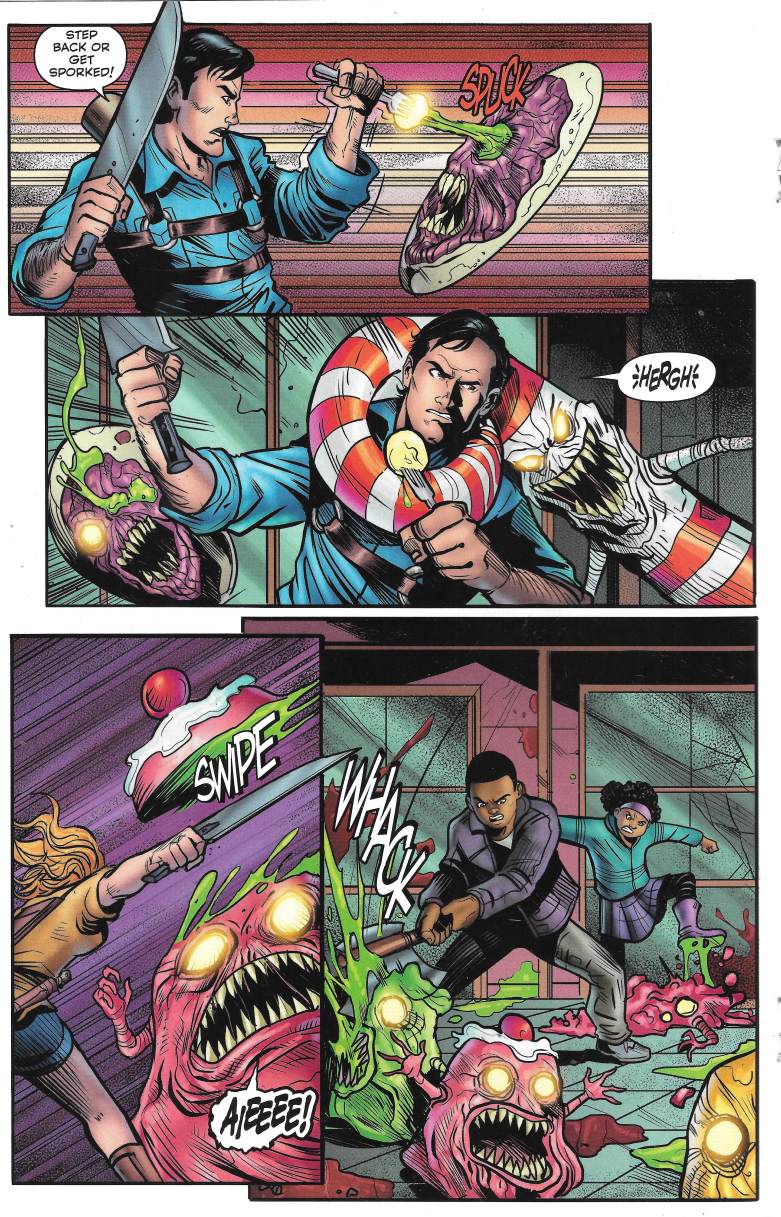 …ending with Ash getting attacked by a killer Christmas tree. A tree that sounds a bit…familiar? 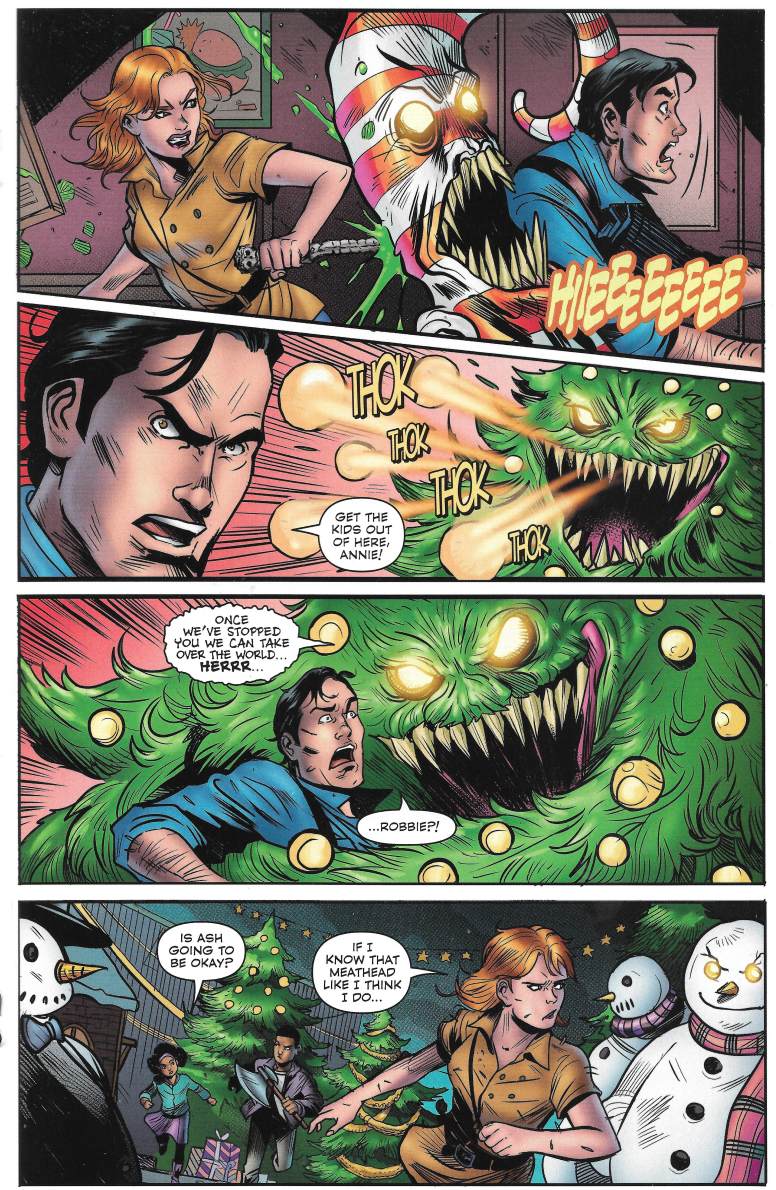 Ash does get free, off-camera. He makes it back to Annie to explain that Robbie set them up, knowing the park would be a death trap with himself leading the pack of possessed park attractions. 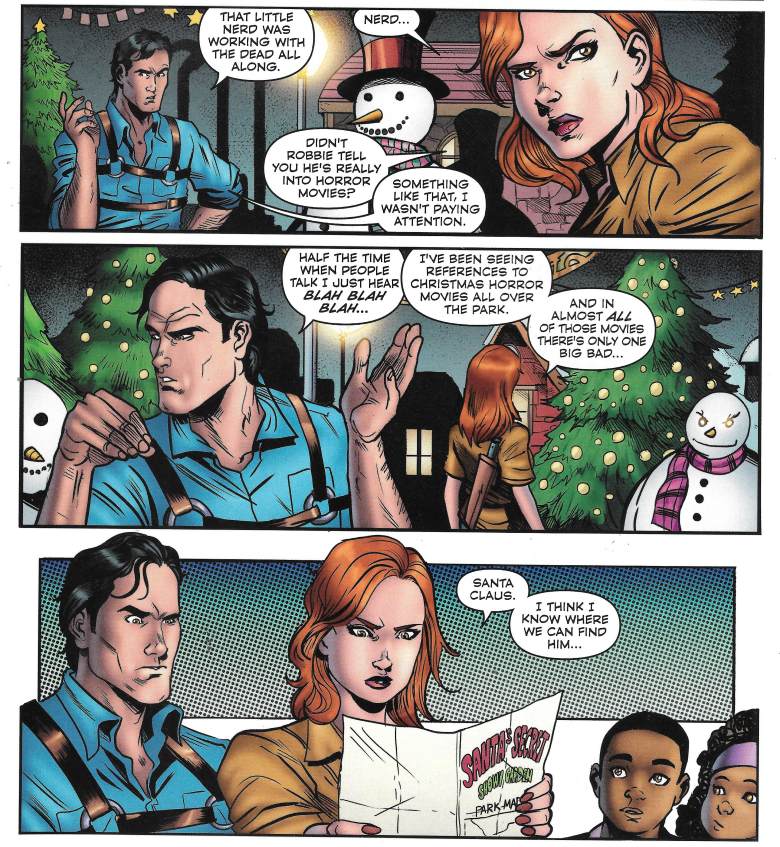 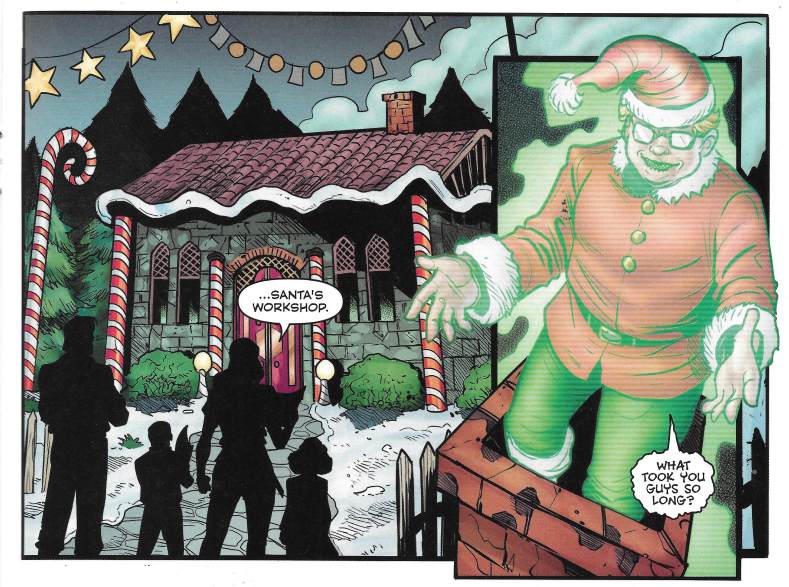 Robbie has some final boss minions to take on first, of course… 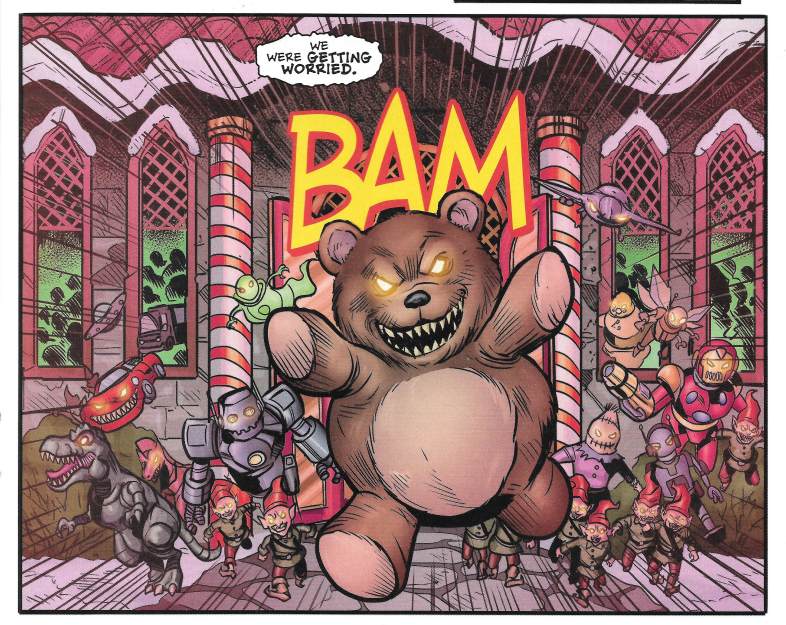 ..but nothing our intrepid four-some can’t handle. 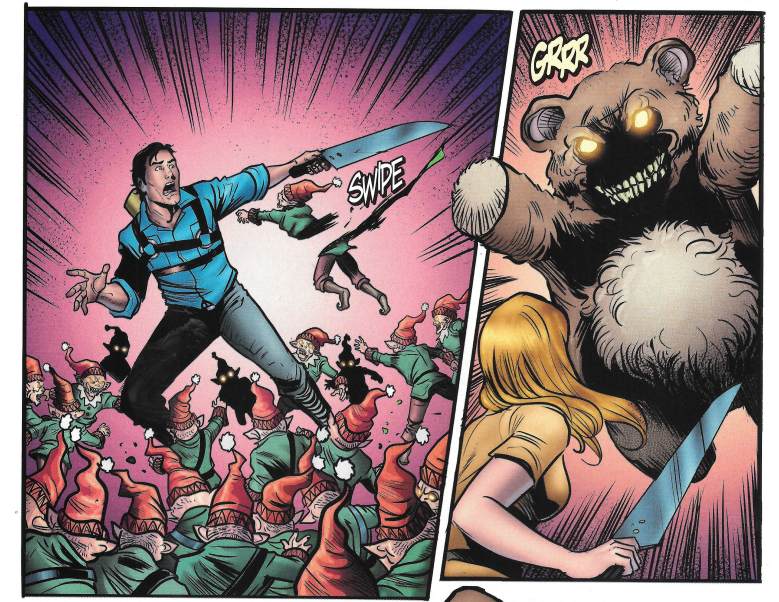 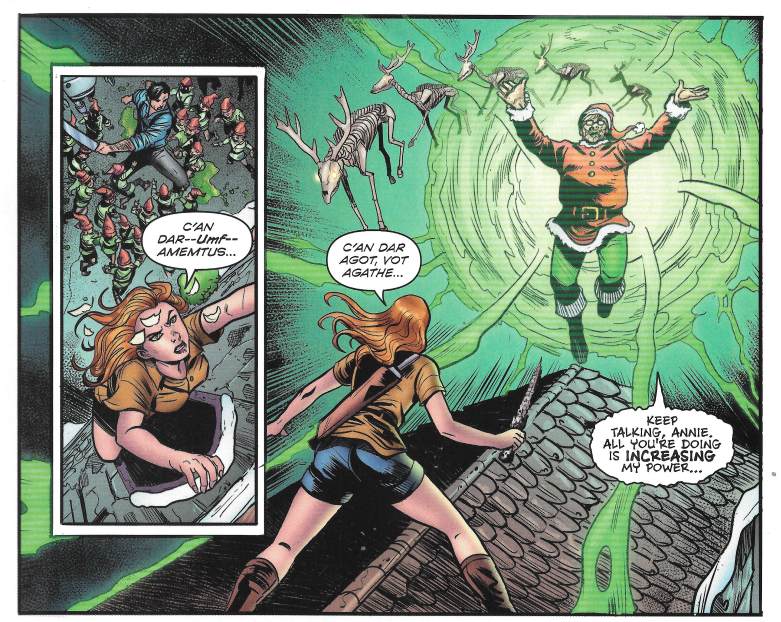 …Annie jumps “up on the rooftop, click-click-click… 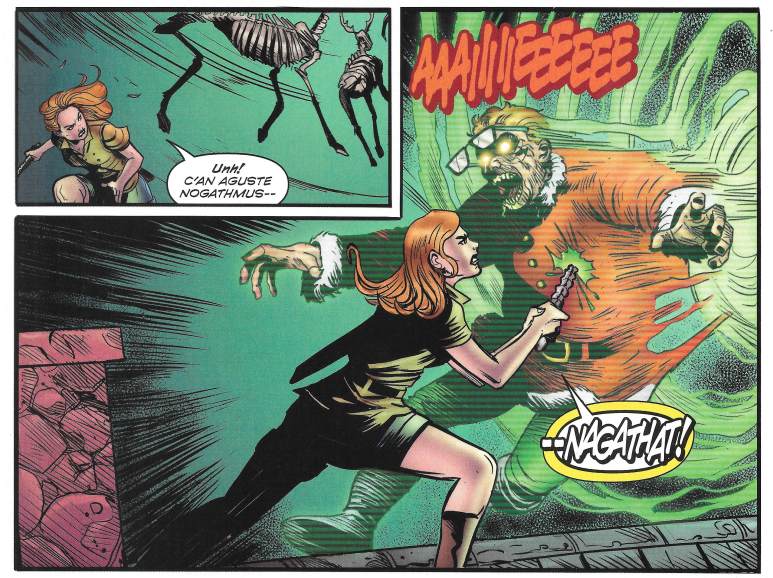 …and stabs a Kandarian dagger through Good Saint Nick”. 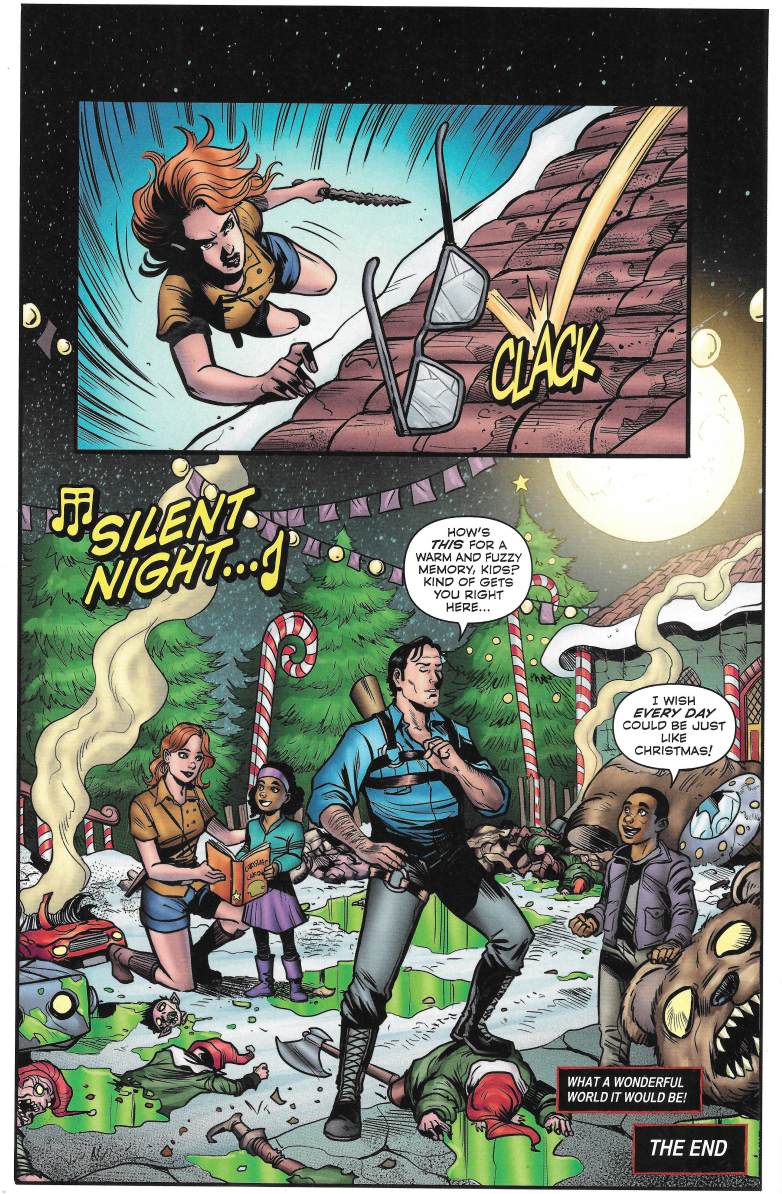 And with the clatter of glasses on clay shingles followed by Silent Night, the adventure…and the book…is over.

The Evil Dead universe of comics looks to be a fun one to visit, even if it is disjointed by several versions and publishing companies. As long as Ash is Ash, all is good with me, even if he kills off Santa Claus.
Posted by SonOfCthulhu at 5:34 AM