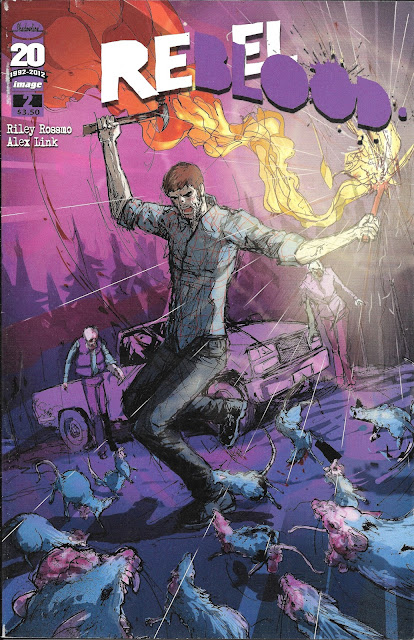 Slow burn that might get better. Horrible title logo though.

Even after a read through of number 2 in this four issue series from 2012’s Image Shadowline comics, I still don’t have a clue what the actual story is really about. There’s some hints of zombie infection yet not outright moan and groaners. Mixed in are some odd animal-human hybrids of terrifying proportions. In whole, it appears to be a survival tale and I like where it might to be going.

Sadly issue two takes off a little slow and the art won’t be to everyone’s taste. Also, that logo sucks to high heaven. Sure we know what it says, but it is so terrible. Just put the words up there, no crazy angles and reusing letters like some 3-D scrabble board. It just looks awful and hard to read.

The interior art fairs better, but has an unfinished or unpolished look to it. Be warned, this tale is grisly and might disgust those with gentler constitutions. We begin with Chuck, who is armed, confronting three ghouls in a home. 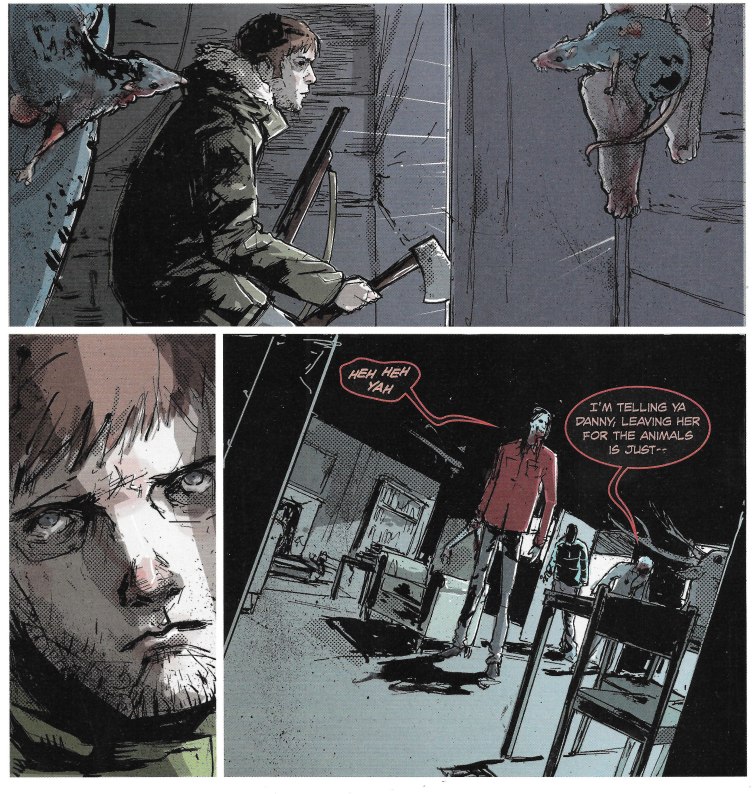 Being plopped down in the middle of the action means we have to suss some things out for ourselves. Let’s start with the…uh,...”fellas” Chuck is about to run afoul of. 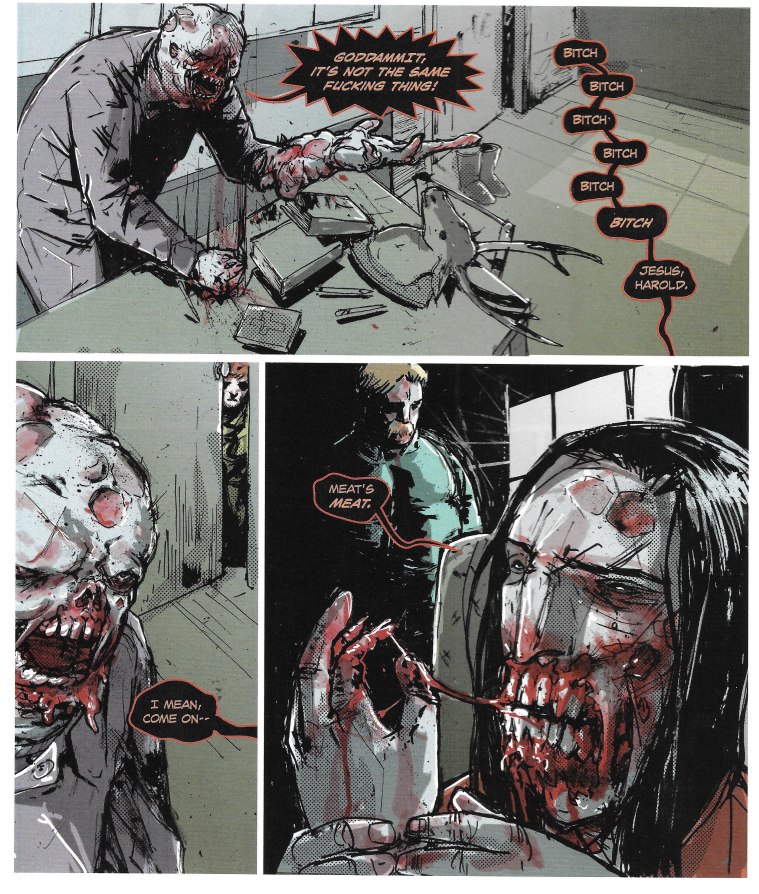 Harold, Danny, and Bill appear to be zombies, although they happen to be the worst kind. The thinking kind. They argue a bit about a woman they recently killed and left in the woods. Harold seems to think they disrespected her. That’s a bit twisted, in that maybe some of these ghouls show remorse at their actions.

Chuck bursts in at this point and holds the three at gunpoint. Appears he’s familiar with them, which leans to the assumption that these guys used to be human, but have turned recently. There is also a dash of irony in their macabre statements. 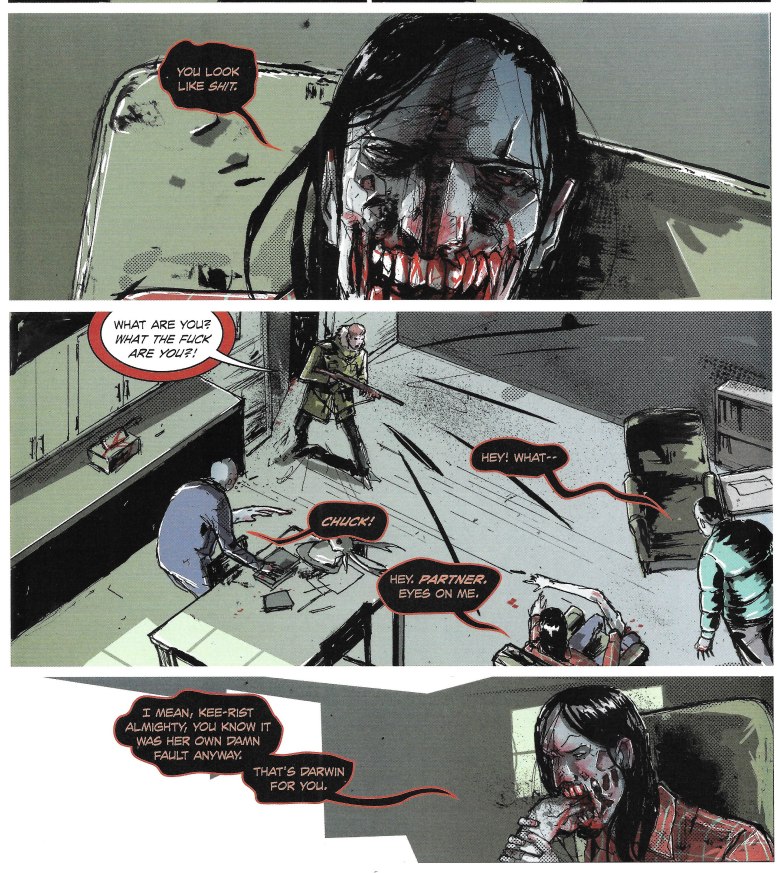 Danny, the zombie in the red shirt, is clearly the leader. He claims he is “unarmed” and then makes a joke about holding the arm of a corpse before chowing down on a finger. 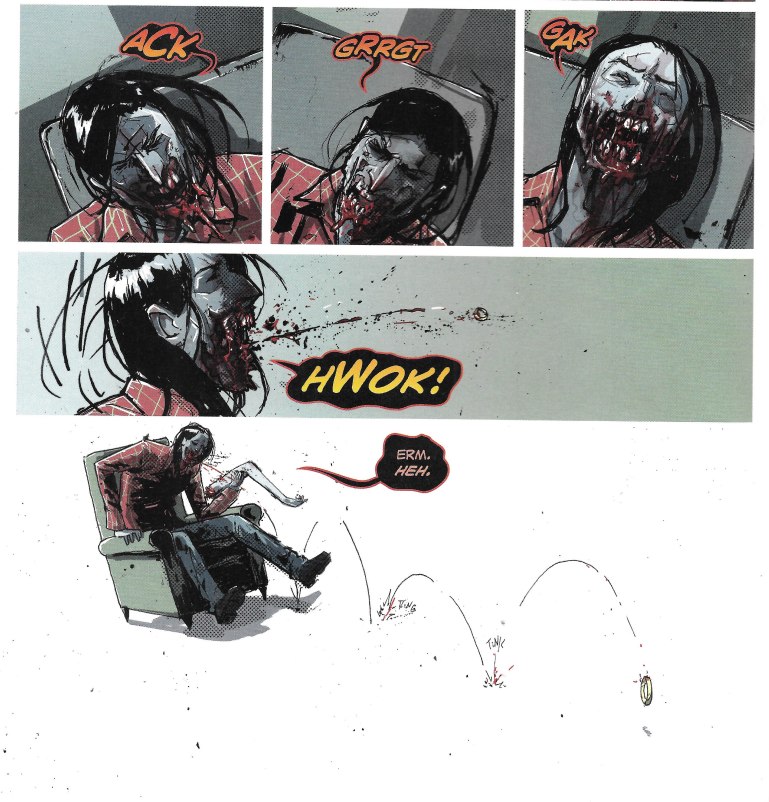 That little distraction with the ring is enough for the trio to get the jump on Chuck. 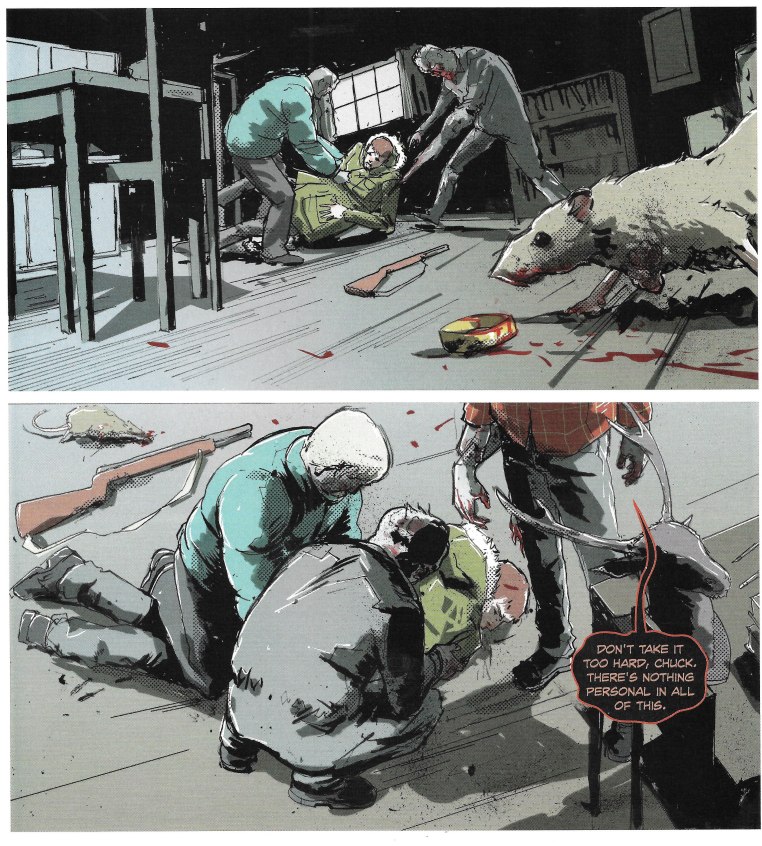 Sadly, it appears he’s going to be on the menu later. 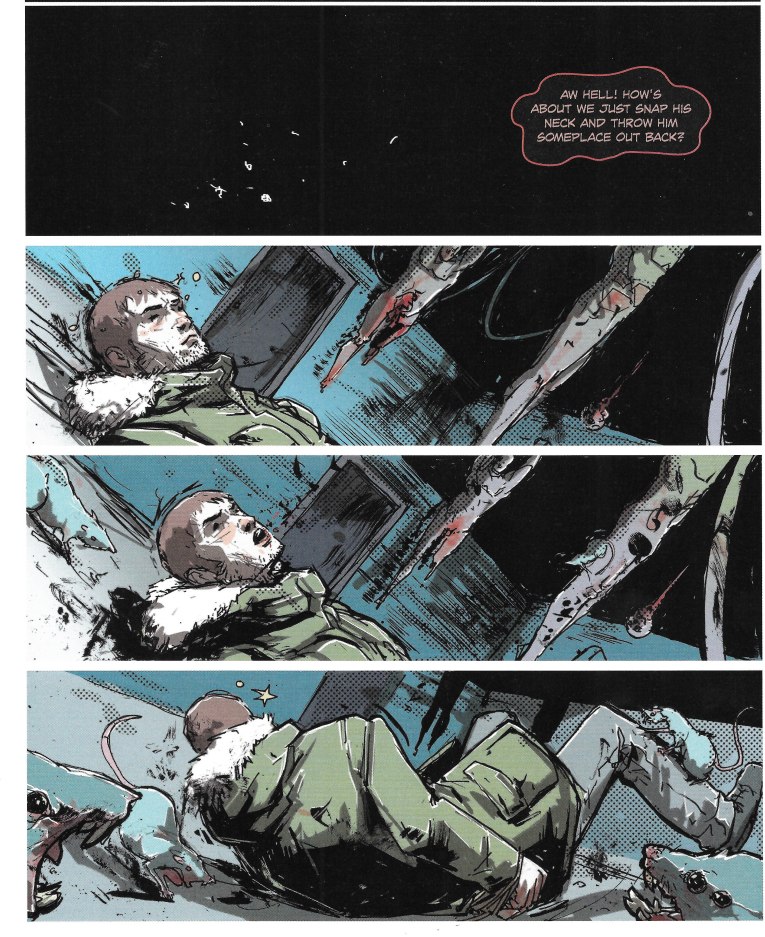 He awakens in the meat locker of the damned, with body parts of other people hanging from the ceiling and infected zombie rats running all over the floor. 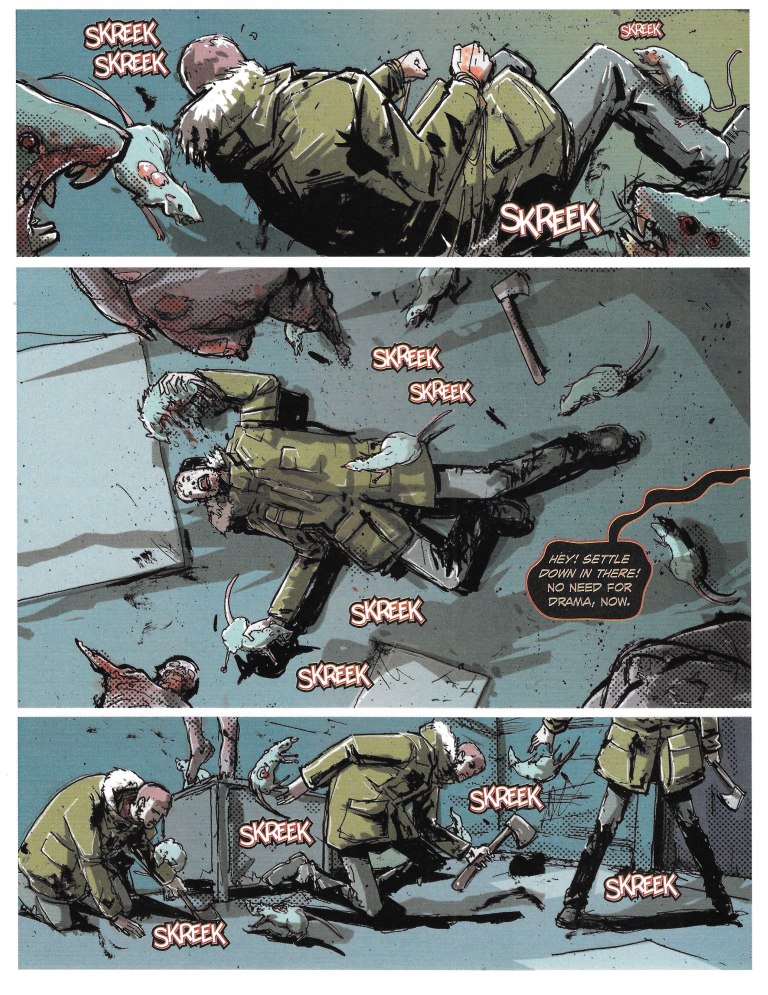 I don’t know of much scarier that having to defend yourself against infected zombie rat bites. Chuck perseveres, however, and makes it to his feet clutching an axe. 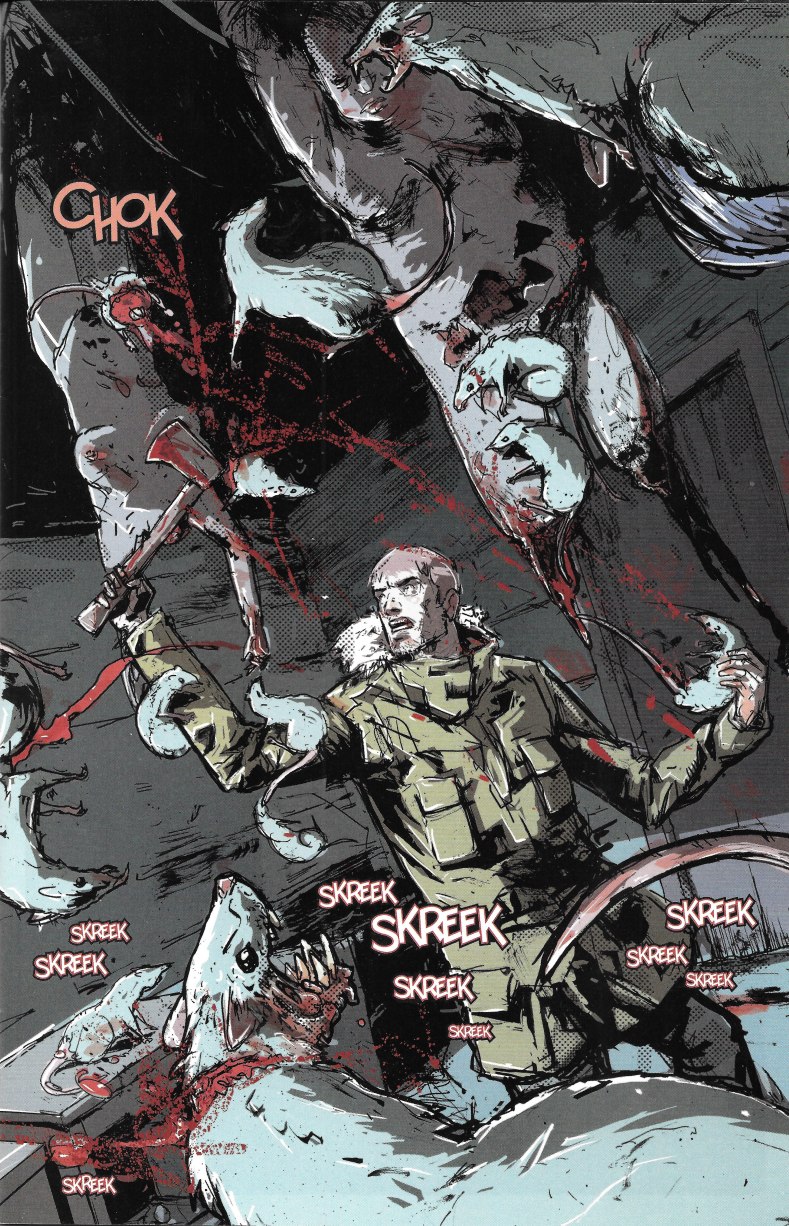 Which leads to a one-panel all out rat battle. I’ve ALWAYS thought it odd that zombie movies never included infected creatures. I believe because it stacks the deck so far against humans that you just have to give up and shoot yourself. If every animal in the food chain can get infected, you are going to become a vegan very quickly. Not to mention trying to kill millions of rats, bats, cats, dogs, wolves, etc…that would think nothing of giving you an infectious little nip. I mean, that would be check out time.

But not here. Here, Chuck fights on. He makes so much noise that Danny sends Harold in with a rifle to take care of him.

Thankfully, Harold lets Chuck get in close enough to take him out with the axe. Also I have no clue what is up with Harold’s hand, but many of the creatures in this look all mutated so I’m gonna go with that as an excuse. 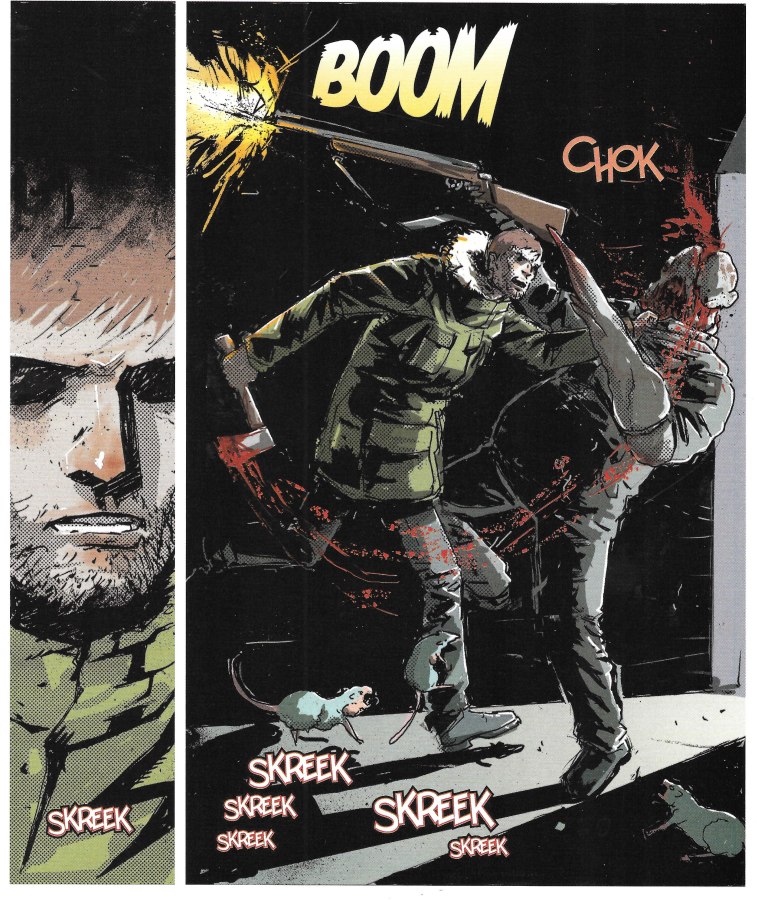 Armed with both a shotgun and the hand axe, Chuck takes on the remaining two zombie-hillbillies. He downs Bill with a chop to the midsection. 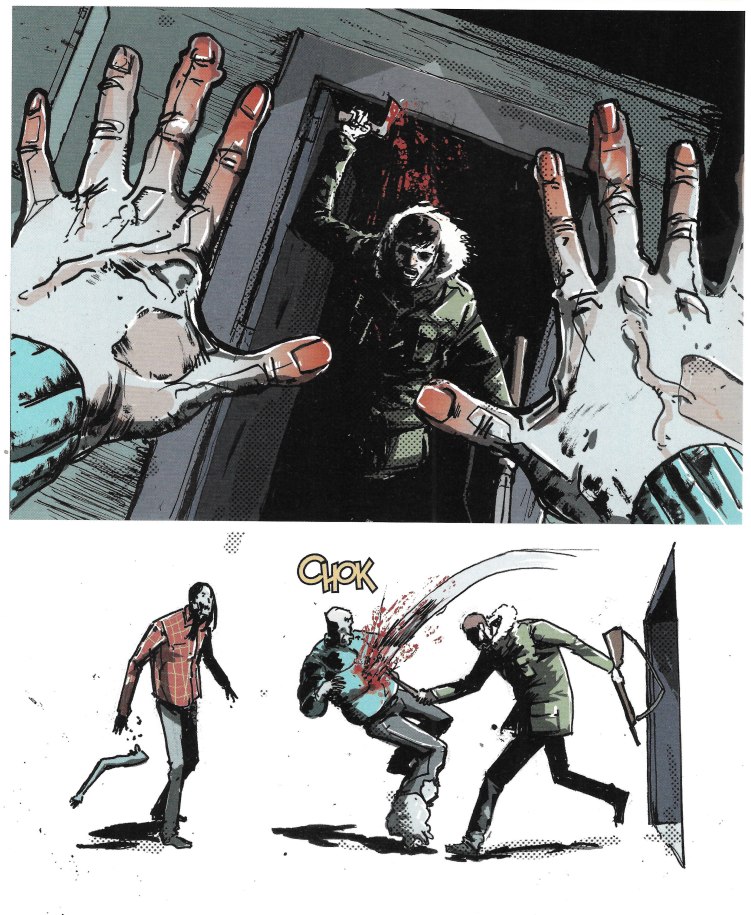 That leaves only Danny to face off with. But Danny brings up the sobering thought that the deck is really stacked against Chuck. 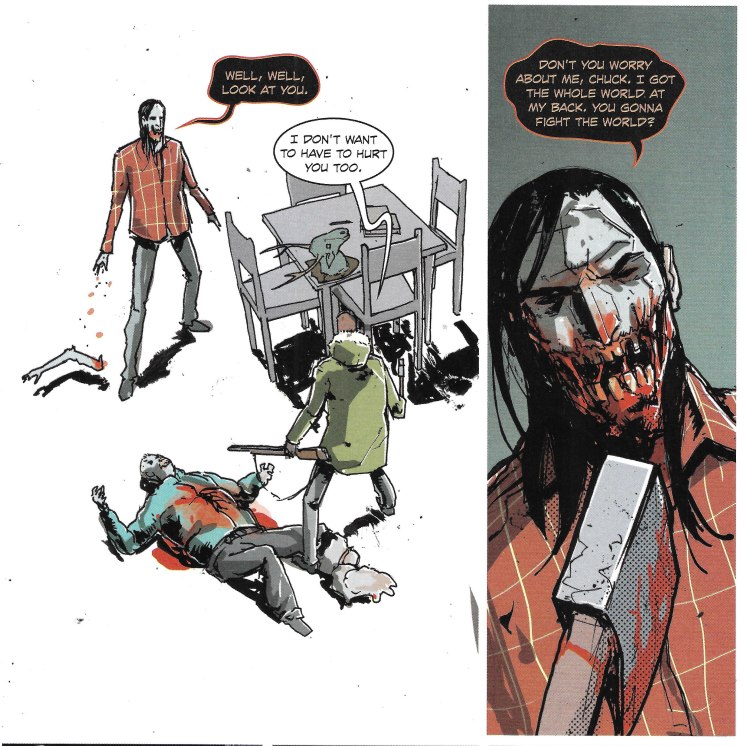 Chuck ends him with a quick hatchet to the head. Not that one less zombie makes his fate any less bleak. He grabs a truck and high-tails it out of there, getting a CB Radio call from a guy named Red. Red asks if Chuck is okay. 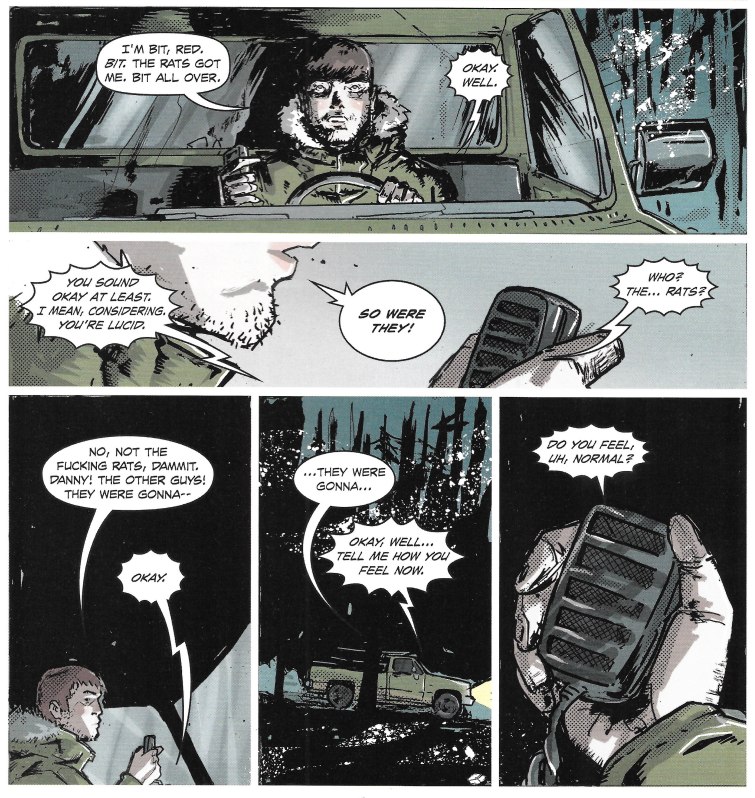 Clearly there is no way to feel normal when the entire world is in the crapper. 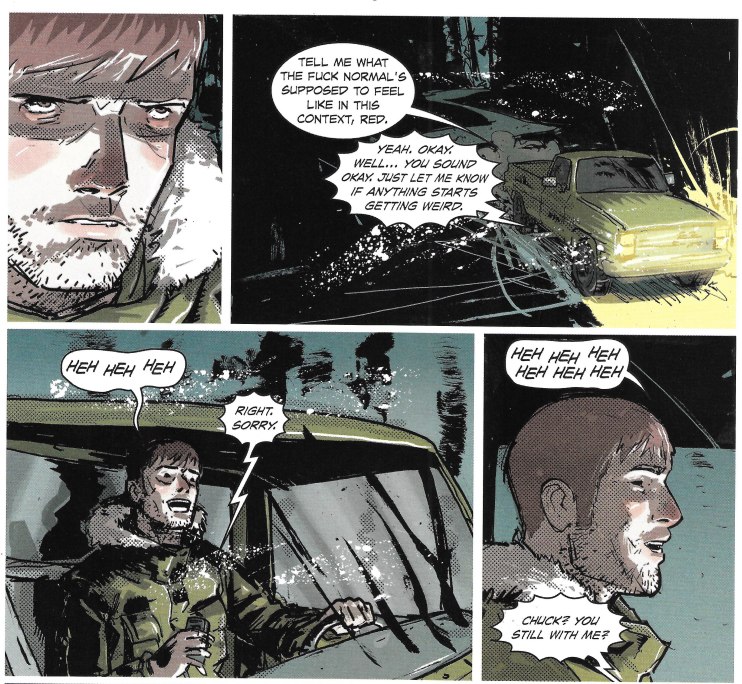 I am unsure about Chuck all of a sudden. Danny seemed to have that same weird laughter and I’m not sure if this is Chuck losing up a little or if he’s starting to turn.

And speaking of turning, it’s now that Chuck’s thoughts turn to remembering his family before things got so crazy. He remembers reading his kids The Fellowship of the Ring while his wife did laundry. It’s sweet and it fits as a good change of pace to examine what Chuck has really lost in this madness. 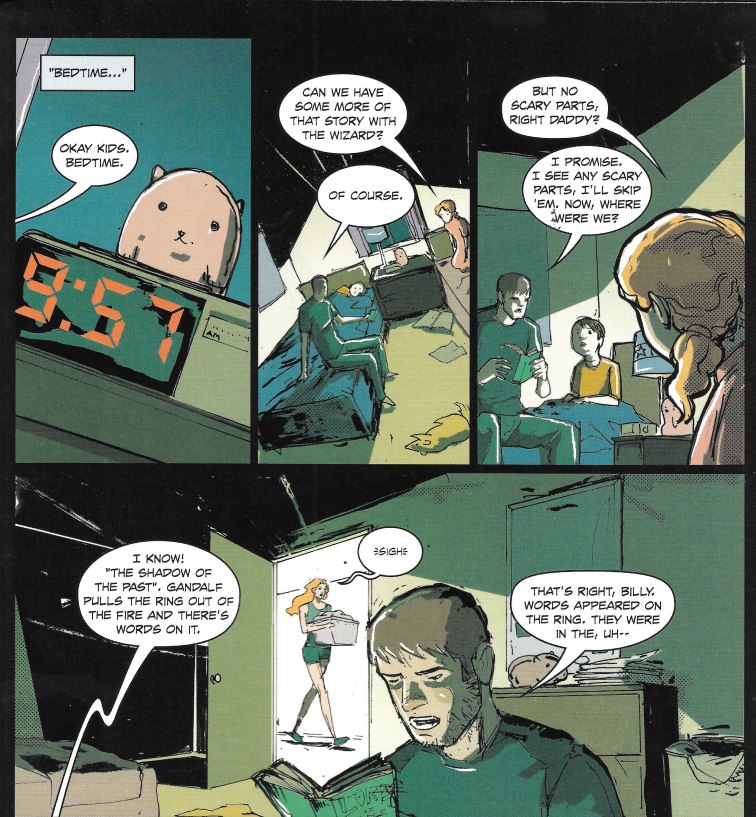 And as Chuck heads to bed beside his wife… 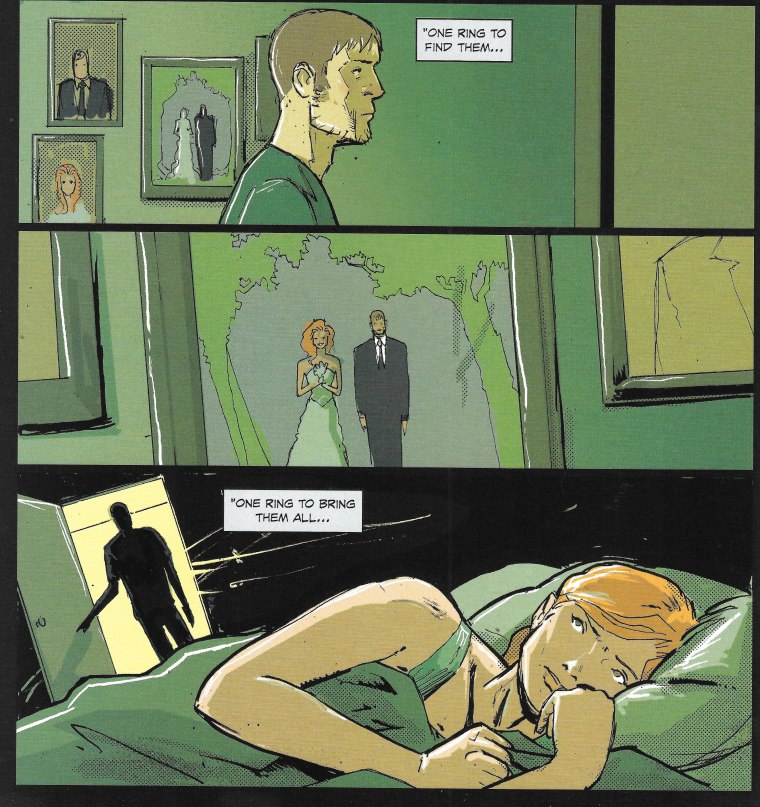 …his daydream becomes a reflection of the nightmare he currently inhabits. 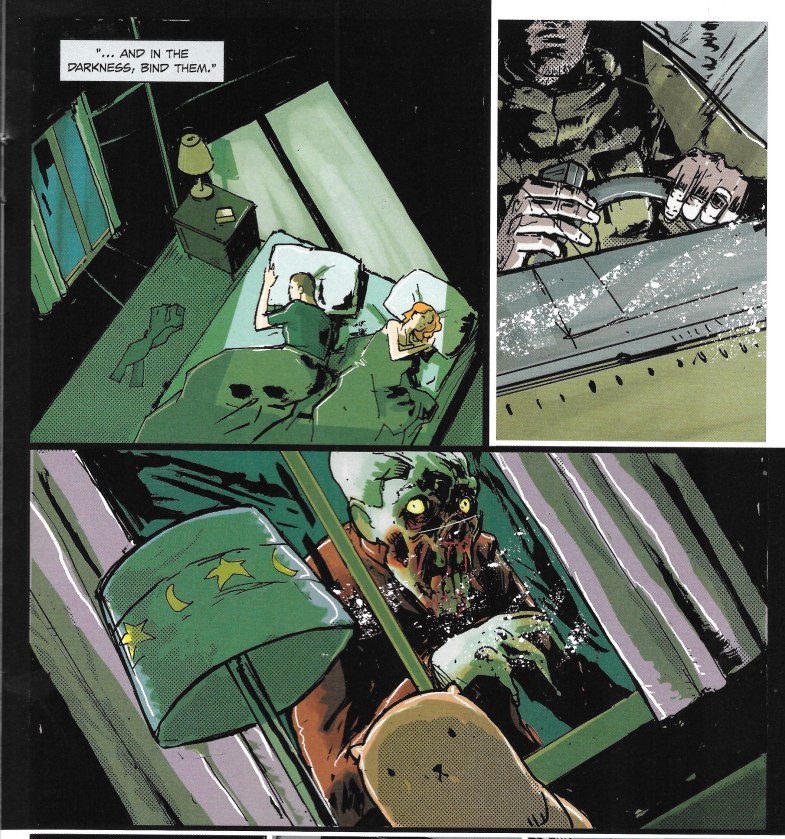 Chuck turns on a radio preacher to escape his thoughts, while coming upon a driver stranded on the side of the road. Unfortunately, this driver appears to be a pregnant female already infected. 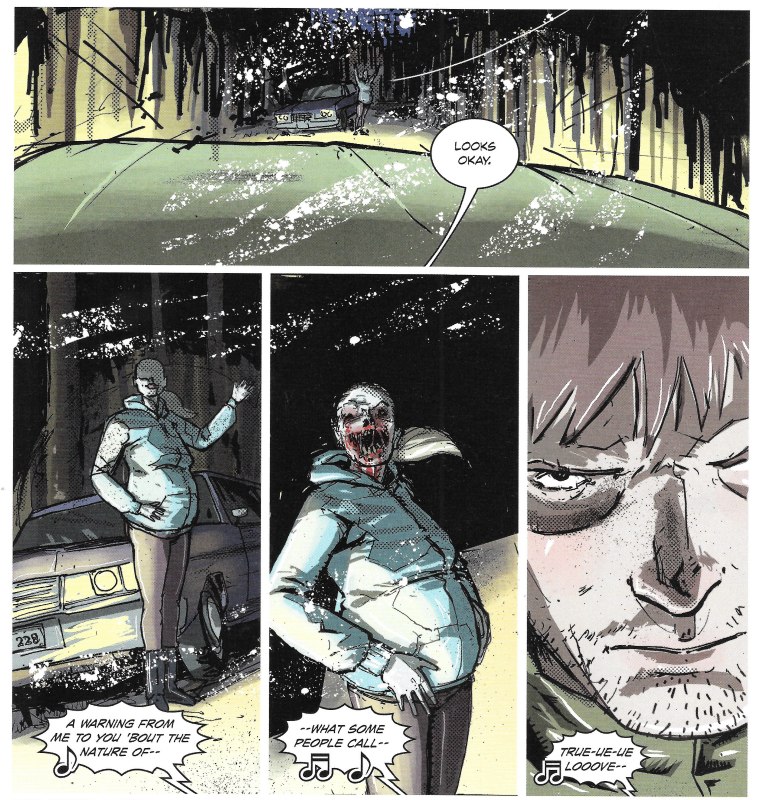 Chuck tries to run her down, but she moves too fast and breaks through his front windshield to get at his juicy bits. Chuck loses control of the car, which strikes the other car and becomes airborne… 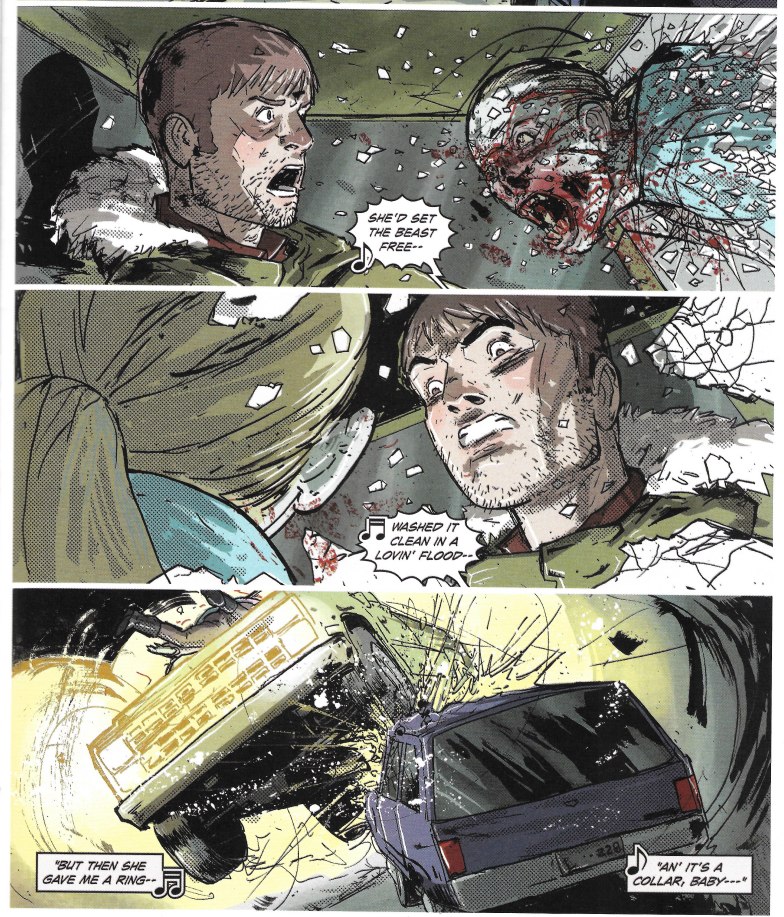 …rolls over and comes to rest upside down. Appears that the wreck is the least of Chuck’s worries as something…strange in coming for him. Strange and definitely infected. 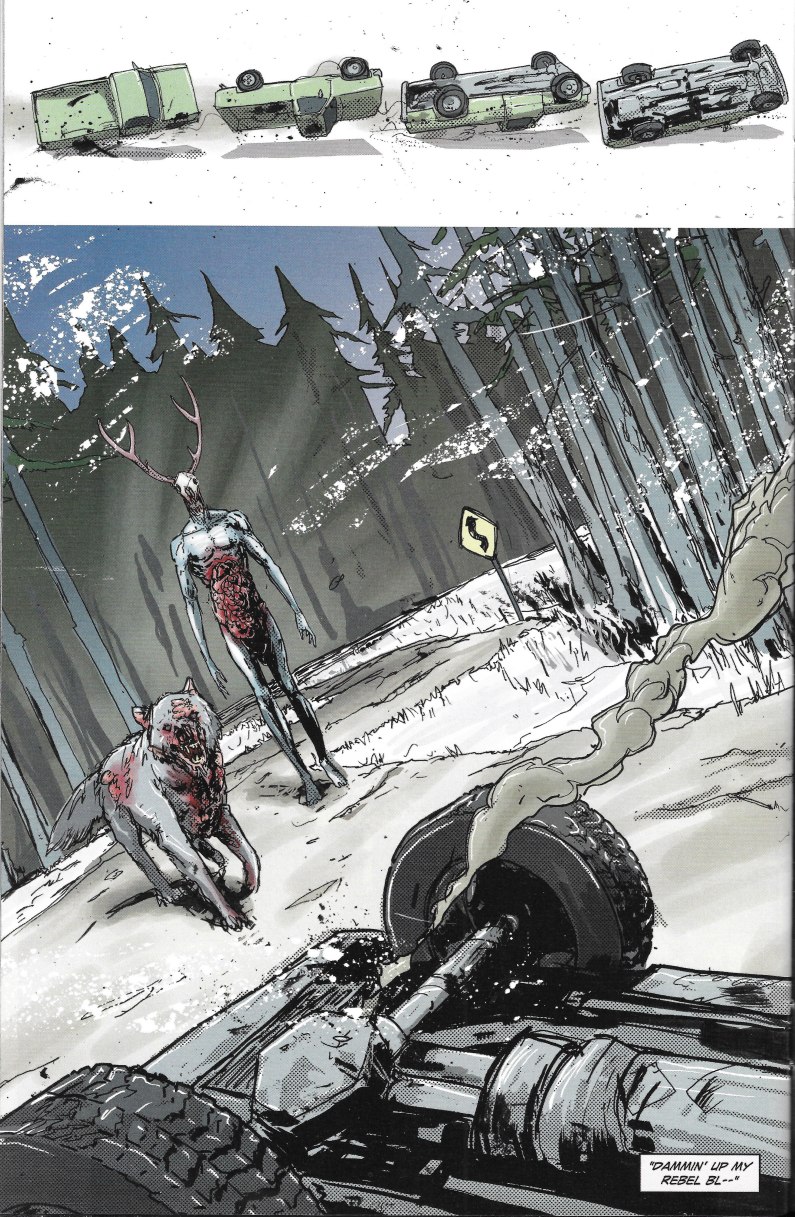 In all this isn’t a bad issue. The art has moments that work in the context of the story and setting. The plot does a good job of providing us with lots to worry about for Chuck and the world he inhabits. I’m really intrigued with the creature on that final panel. Is that a personification of nature coming to cleanse man and animals from the planet? Is it an escaped laboratory creature? Is it a god?

If I see issues 1, 4, or definitely 3, I will pick them up, just to find out more of the story. They really should do something about that logo though.
Posted by SonOfCthulhu at 3:50 AM