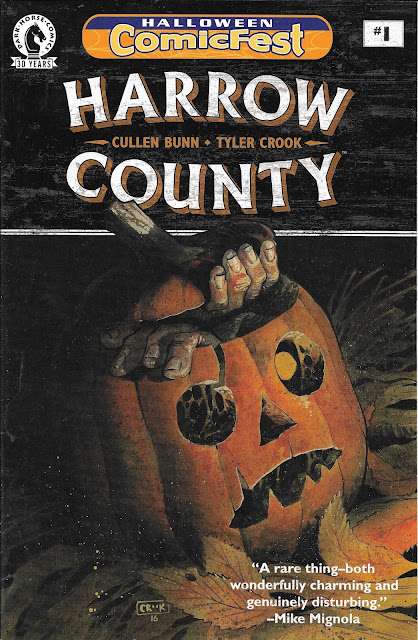 “Delightfully terrifying” horror from the farmland

I ran across Harrow County last year on Halloween-Freebie Day at my local comic shop. The cover made me curious enough to use one of my two free pulls on it. Then life intervened and I wasn’t able to touch it until last month as I was going through a stack of unread horror books.

Once in hand, I didn’t know what to make of it. The story starts as such a slow burn. It deals heavy on atmosphere and setting, with very little real gotcha moments until the very tail end. There is something about the art that reminds me of a painted version of Tintin. Not all over, but certain character stances or action poses. However, this book is no Tintin.

It’s an old fashioned spooky story. And a damn good start to one, at that.

It all begins with the words “The folk of Harrow County put the witch to death…but the witch did not die easy.” 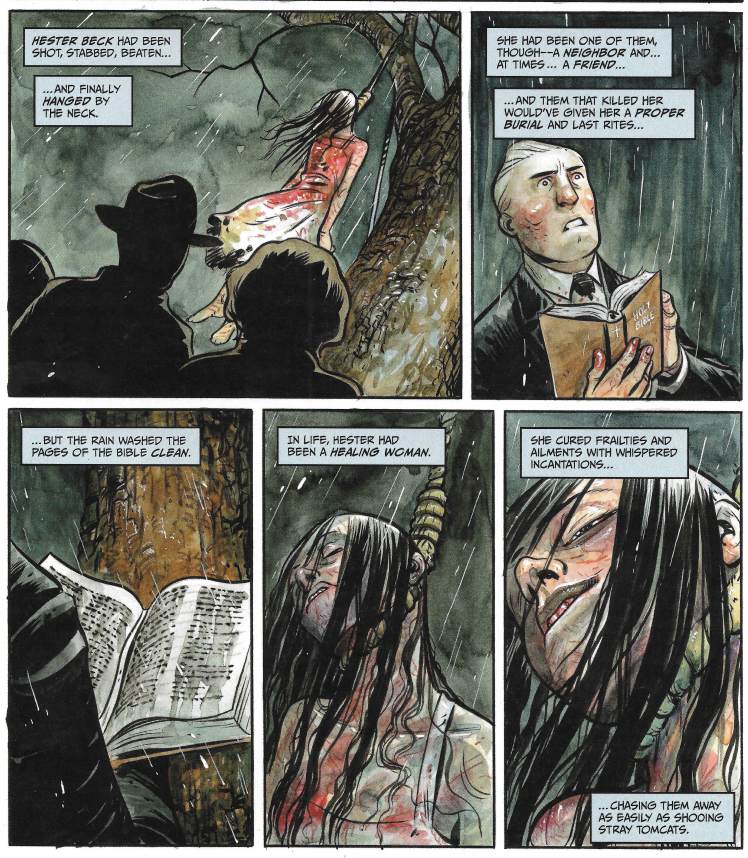 Beck’s death occurs in years past and the tree from which she is hung will become a focal point for most of the story. The townfolk who hung her did so because she was doing all the standard witch things. She would heal a few people and then... 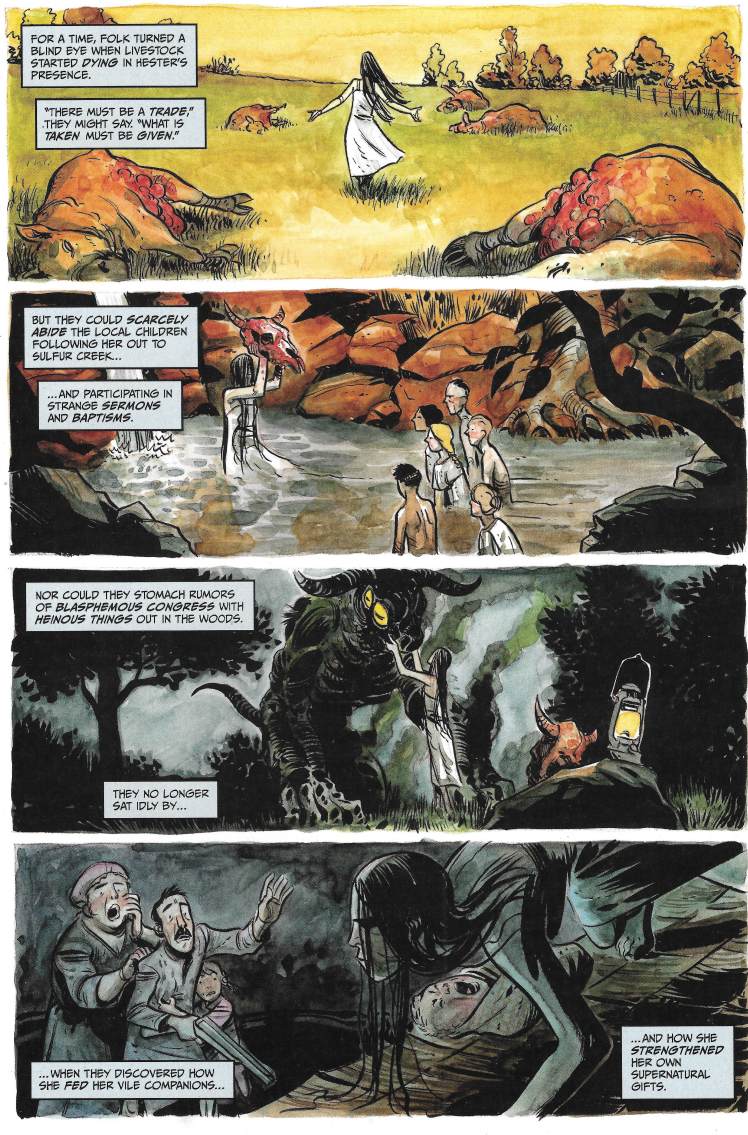 Like petty much everyone, everywhere, they drew the line at feeding babies to devils. I’d say Beck had it coming to her. And since witches can heal others, after hanging her they didn’t take any chances. They poured gasoline on the body and set it alight… 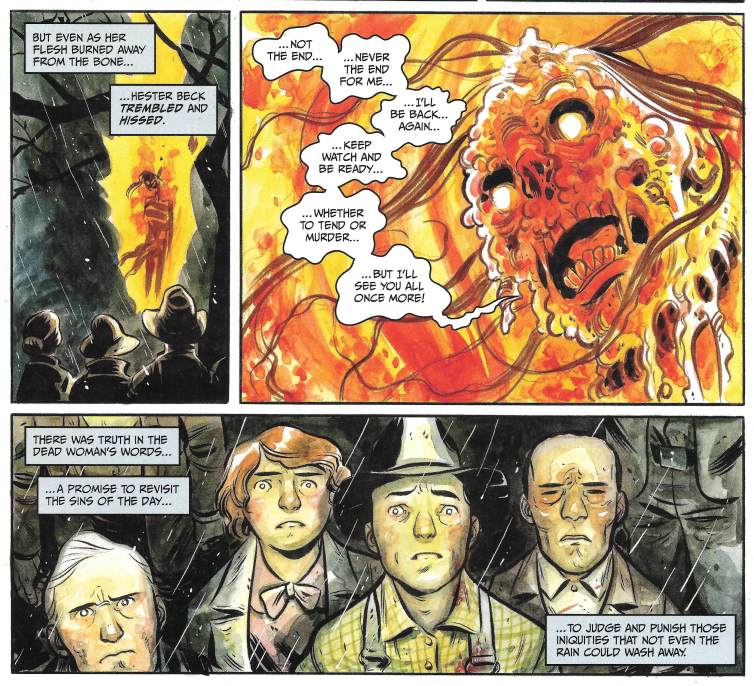 …That can’t be good!

That shifts us to present-day Harrow County, a not so changed place, and Emmy, the daughter of one of farmers in that crowd. He’s raising Emmy alone, and she’s a good daughter. However, of late she’s been having odd dreams. Dreams about that tree in her front yard… 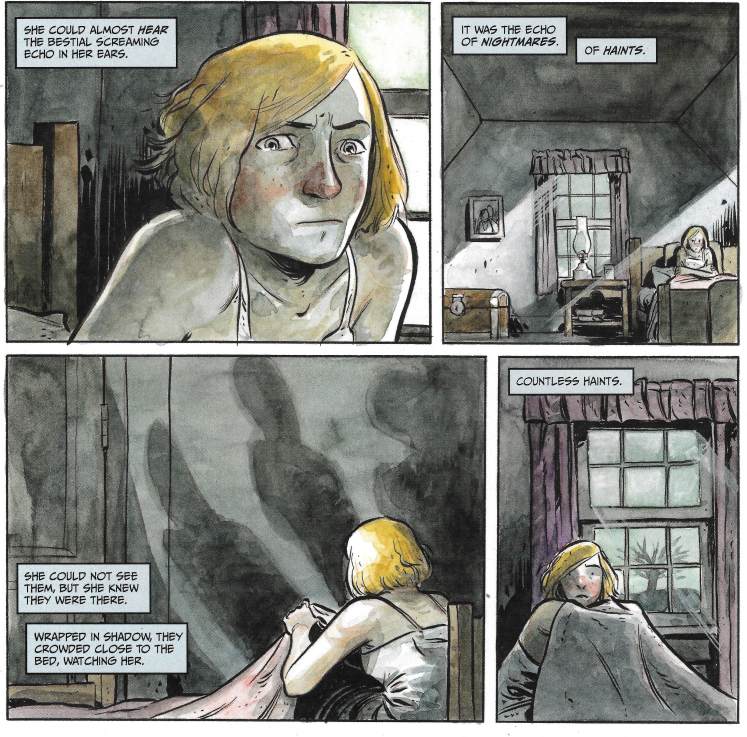 …about that tree and the ghosts and “haints” that visit it nightly. A genuine “spooky old tree.” 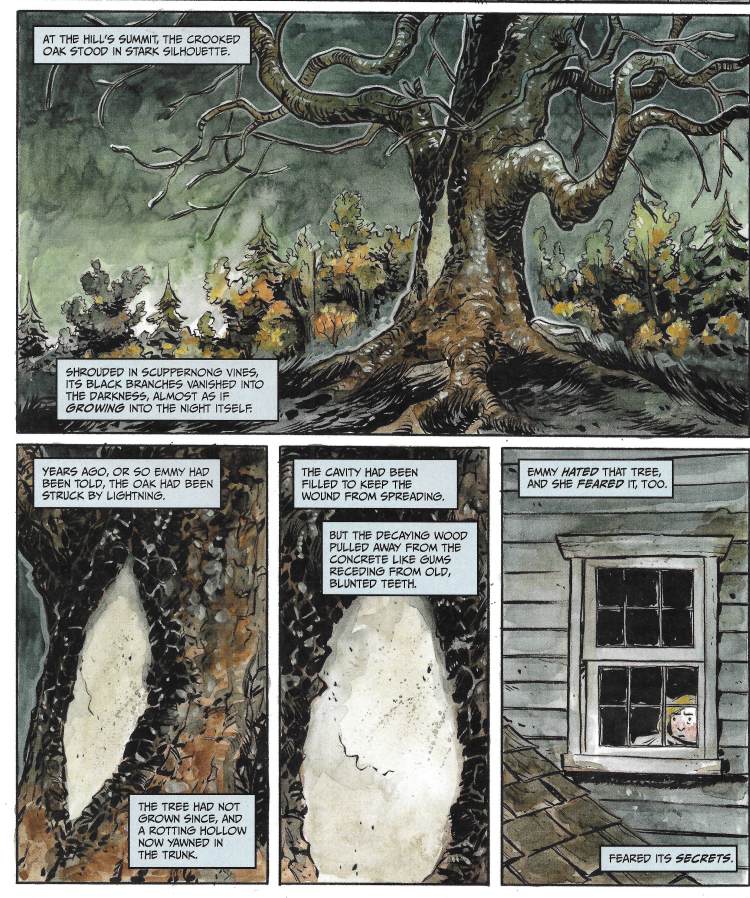 A tree with a vagina. Okay, that was unfair. In her dreams, it is more like a mouth. A living mouth with teeth and everything. A horrible, moving, speaking mouth. 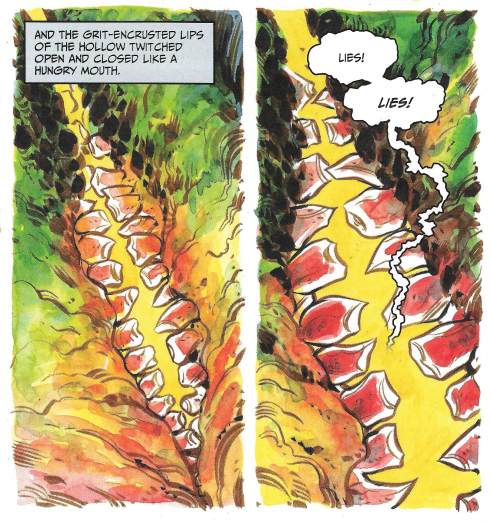 Emmy is going to need therapy. Heck, I might need therapy too. That is sure nightmare fuel. 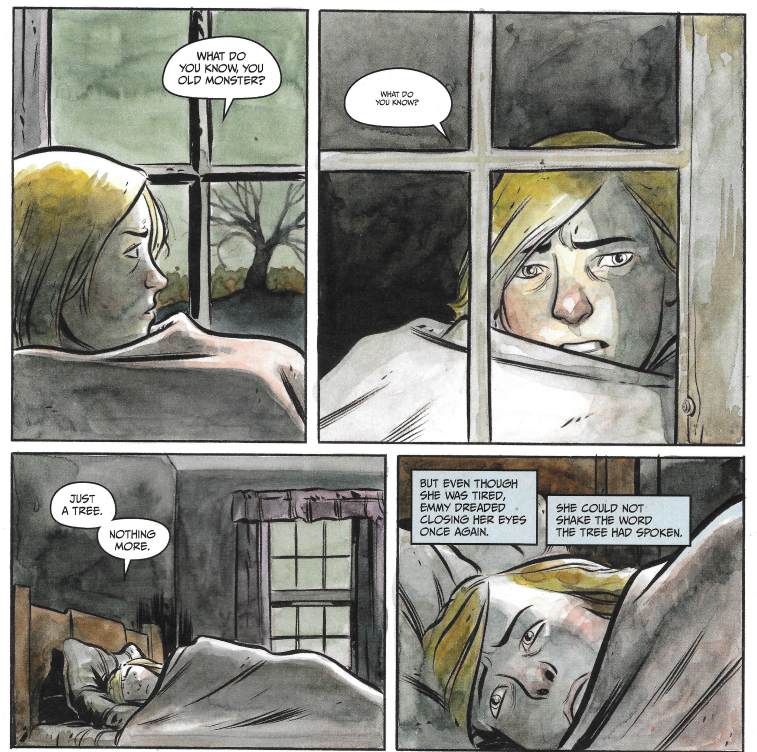 Yet Emmy sleeps with it every night…and awakes every morning to help her father with the farm chores. 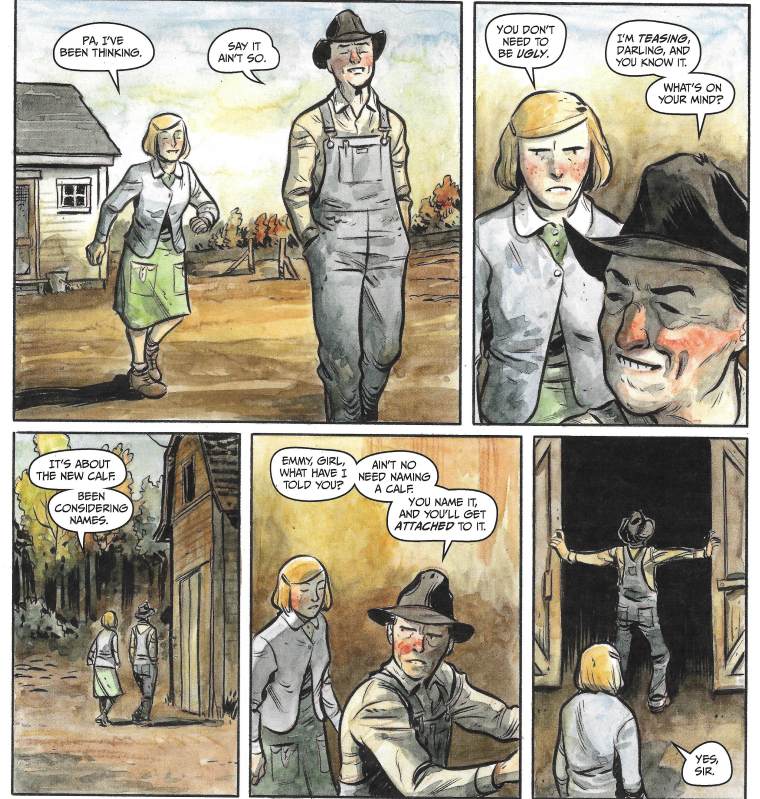 This feels about right for all the farm folk I have as kin. They’d always say the same: “Don’t name your food.” And on a working farm, animals are livestock first, friendly critters second.

Note Emmy’s pose in the top left-hand panel. See what I mean about Tintin? Maybe it is just me, but the resemblance in posture, pose, attitude or limbs gives me that callback. I’ll point out the one other time that it seems very surface. I like it, but it haunts me with feelings that there is a wholesome adventure here, but something darker lurks underneath that veneer.

Speaking of that darkness, we get a look at it right now. The cow gave birth last night. One calf survived, but looks in poor shape the other… 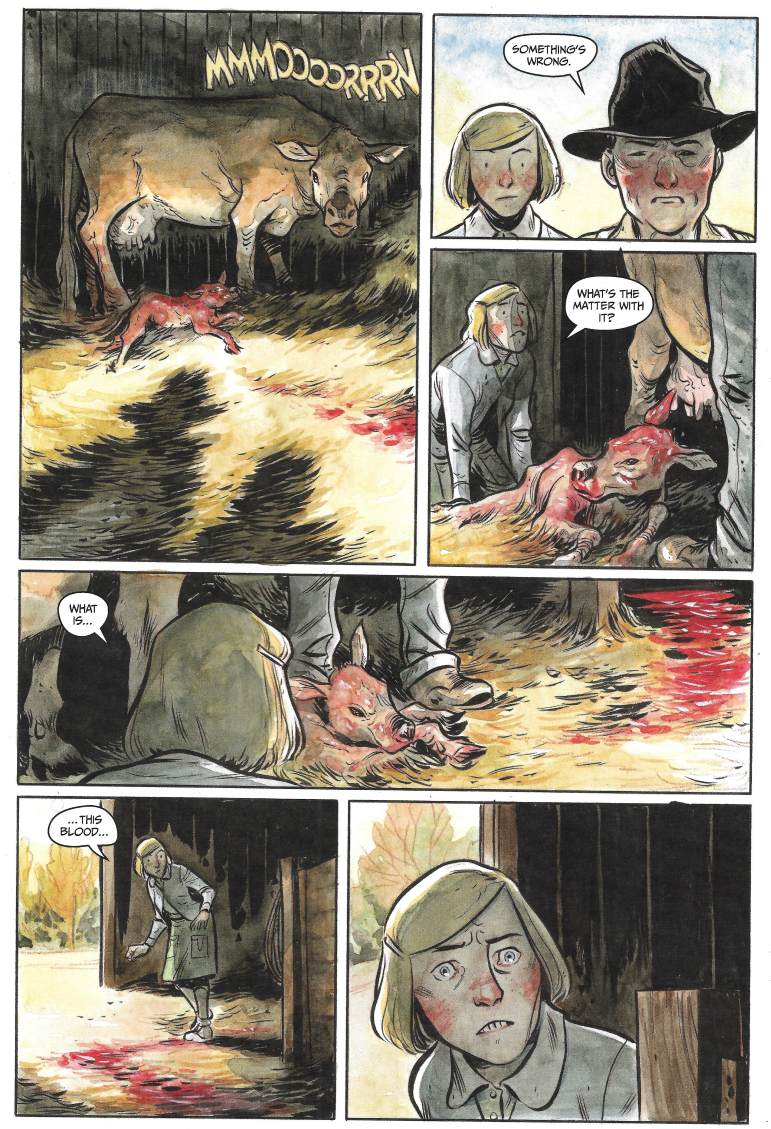 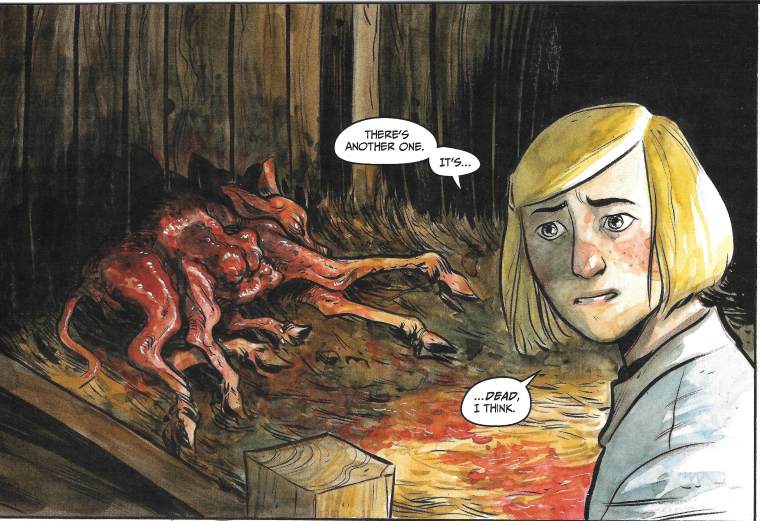 Okay, satisified? It had six legs and its organs on the outside. Happy now that you got to see that?

Emmy’s dad thinks the other calf, with its odd, mutant face, is doomed to a similar short life. He goes to get his rifle to end its misery. Emmy comforts it and becomes attached. 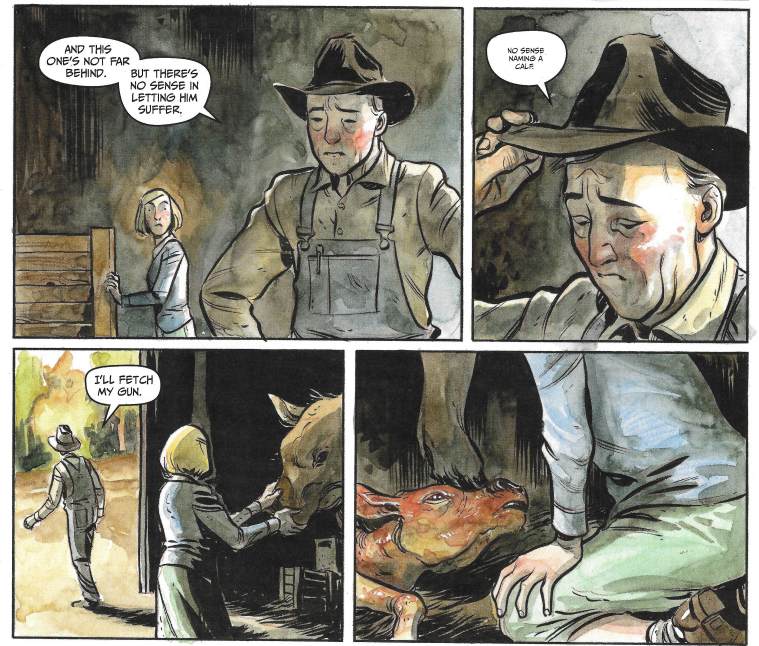 So much so, that by the time her father approaches bearing a loaded shotgun and Tintin eyes… …that she has the calf named and standing in the barnyard. 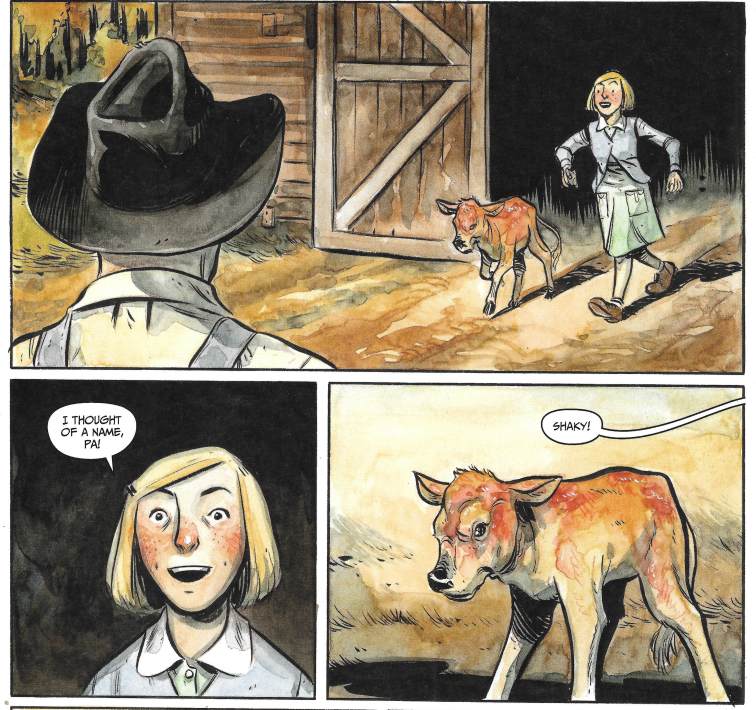 I find much to be disquieted about in these panels, and I’ve narrowed it down to the fall color pallet mingled with the impression of blood. Everywhere there is red or a warmer tone, which typically would mean life, I get the feeling we are looking at blood soaked ground or a blood smeared face. It is haunting and effective, a reminder that the world in this book isn’t kind to children or small things. Something we’d be wise to remember.

The book makes me uneasy, is what I’m trying to say.

The father buries the mutant calf and we get some history by way of his daughter’s inquiries. 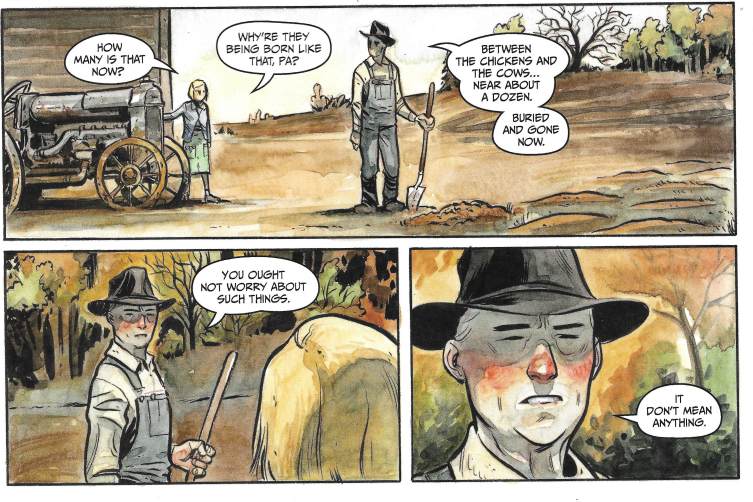 Apparently, they’ve got radium in their well water or something, as a dozen mutant animals is a bit on the high side. Either that or they are cursed. By like a witch or something. Like the one that the dad help kill. In the tree on their property. You know, put like that, it all makes a terrible kind of sense.

The crows in the trees take off, announcing the arrival of one of Emmy’s few friends: Bernice and her father Riah. Riah runs a dry and canned goods store from the back of his wagon... 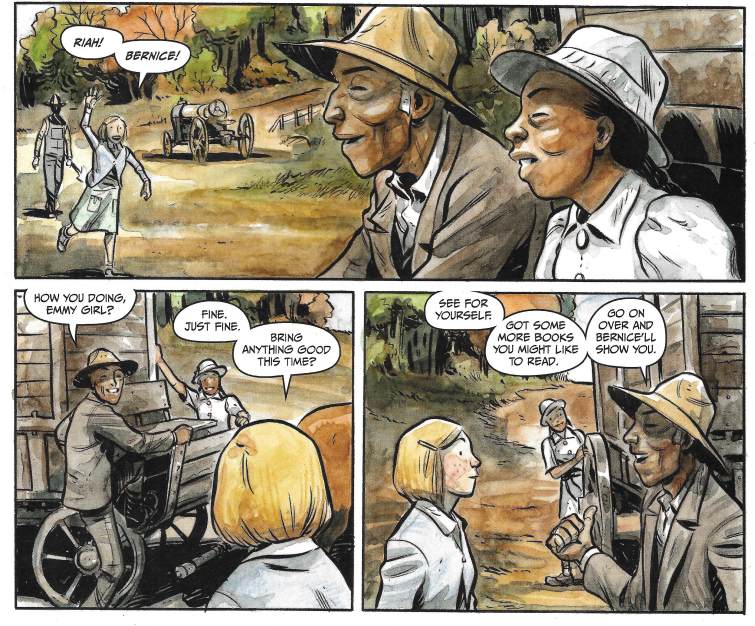 Bernice leads the audience to the fact that Emmy is on the cusp of her eighteenth birthday. There a bunch of portent to that age, and it isn’t just growing up and moving away. There is the feeling that Emmy’s getting older ties into all this strangeness, somehow. 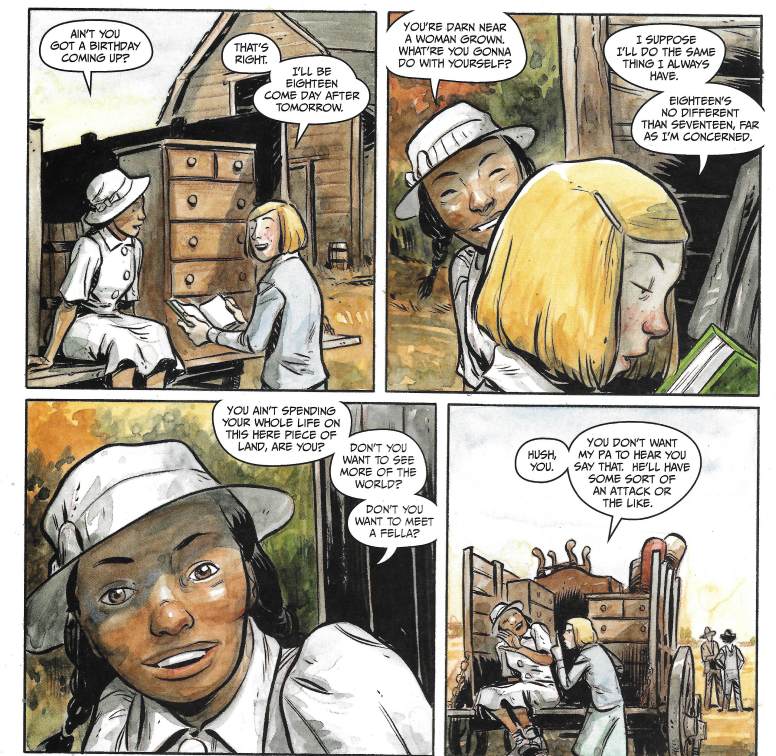 While the girls run off to see the new calf, the men-folk discuss matters concerning their fear of the curse that hovers over all of them that burned Beck and the need to be vigilant for signs of her return. 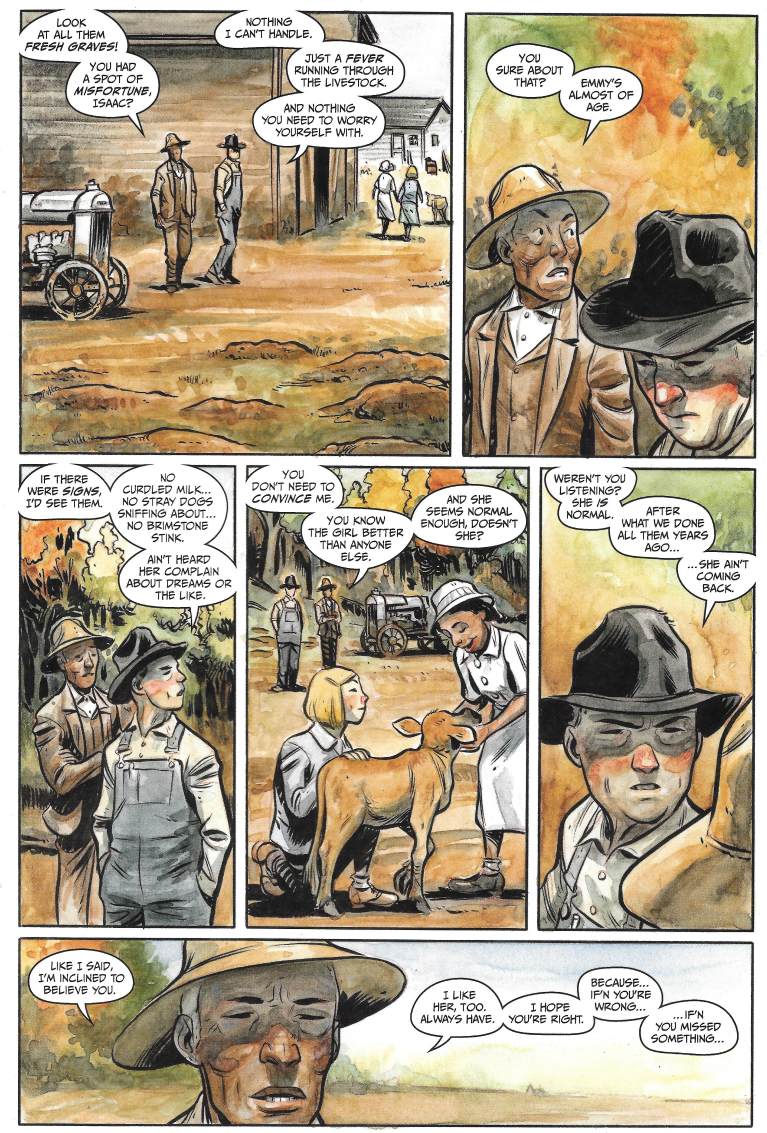 Signs that Emmy’s father is clearly ignoring out of love for his daughter. This story took a very complicated turn, all of a sudden. What one-minute looks to be a character-driven period-piece… 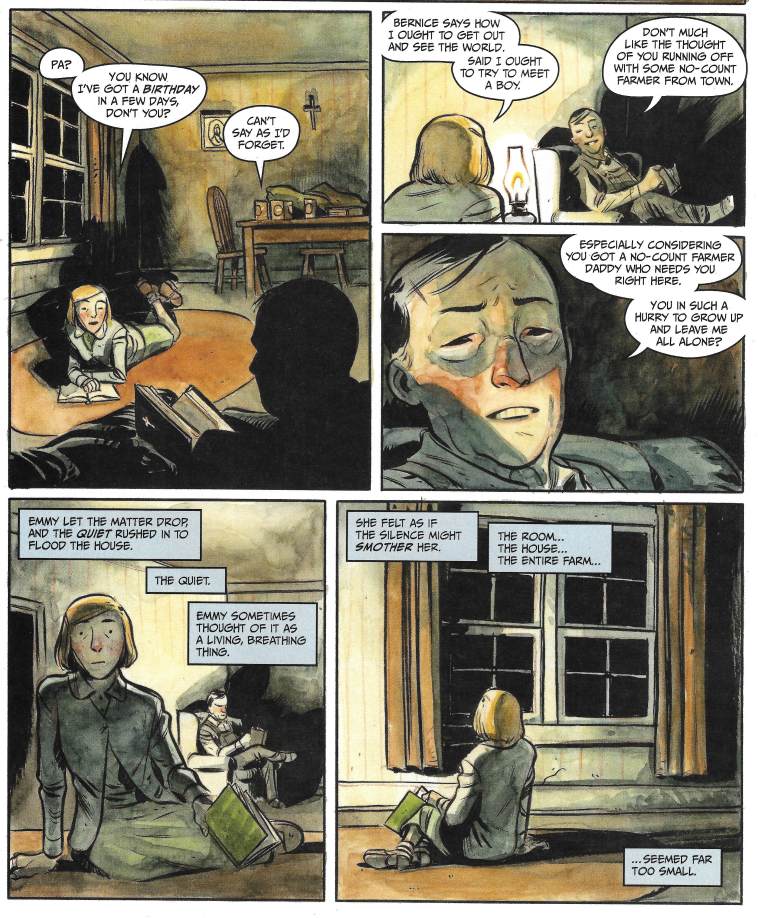 …at others appears to be the beginning of a very dark horror story of a witch’s vengeance waiting in the wings. This juxtaposition works in the best way possible as we end up with many opportunities to step inside a character and feel the breath in their body, such as Emmy as she goes on a walk through the Autumn woods… 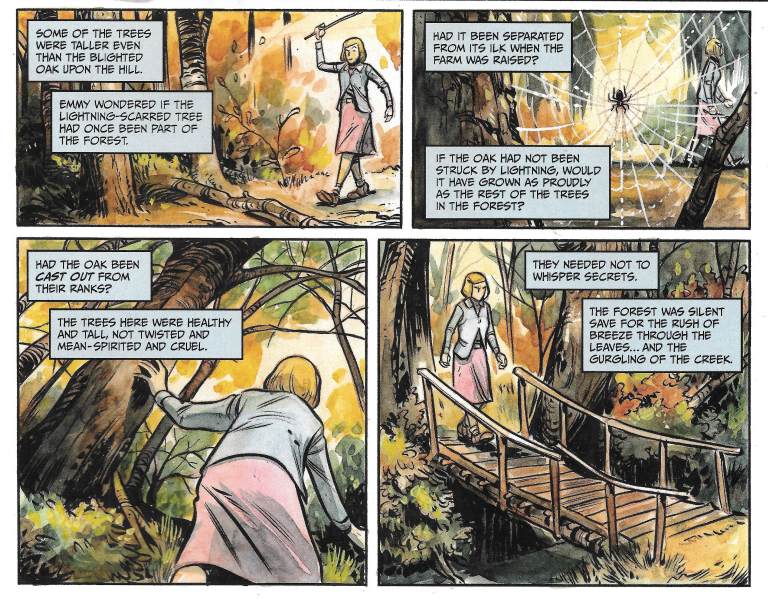 …meet up with something only slightly out of the ordinary… 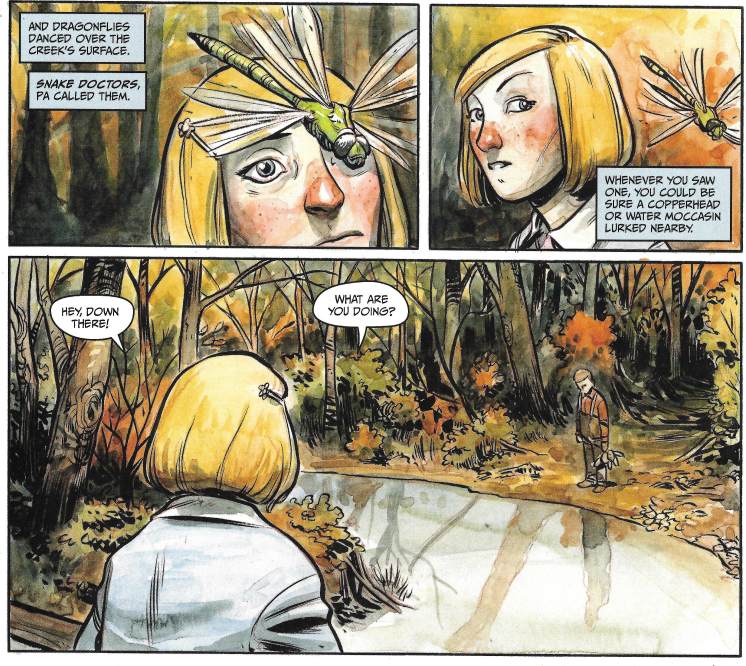 …only to have it become a mystery begging to be solved. Also note the bottom-left character pose here. 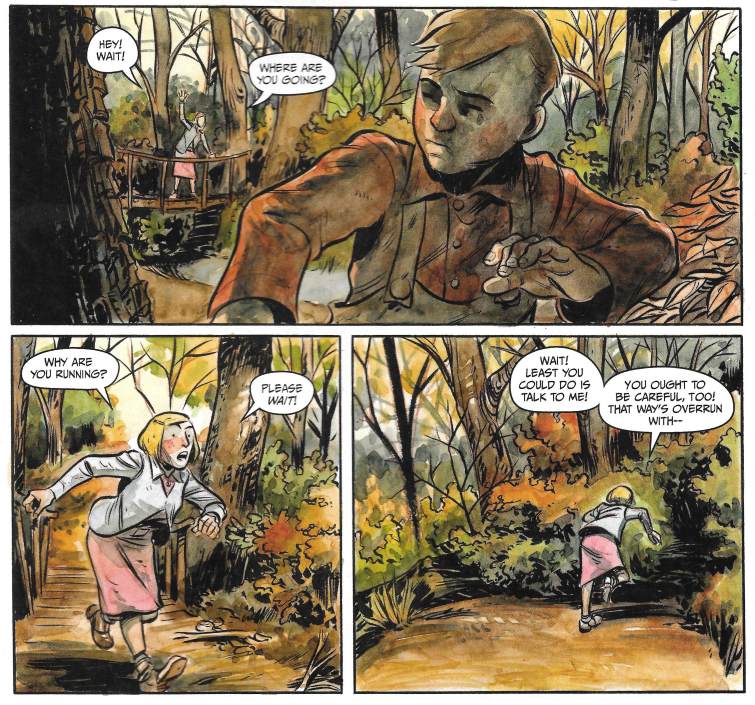 Yeah, that feels very Tintin to me. As for the disappearing boy… 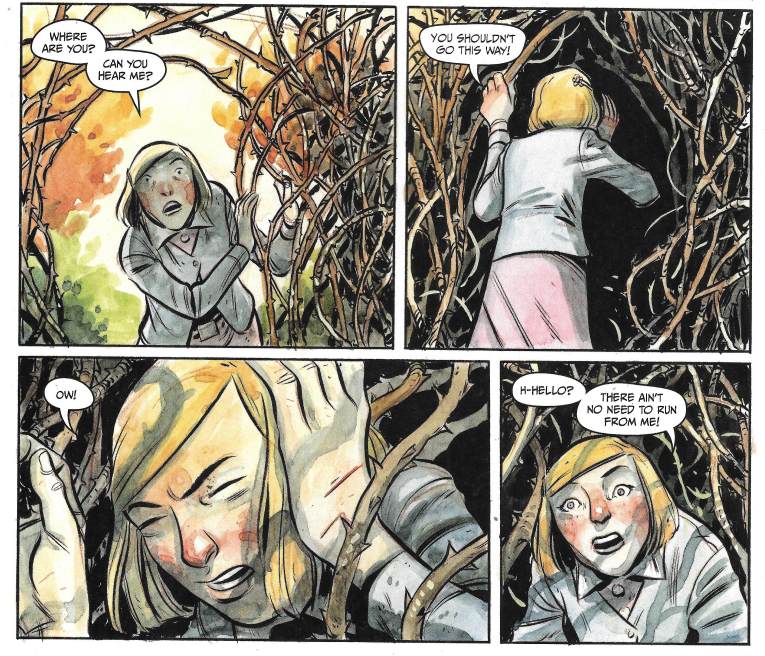 He’s ran into this thorny bramble. Emmy tries to follow and gains a few scratches for her trouble. 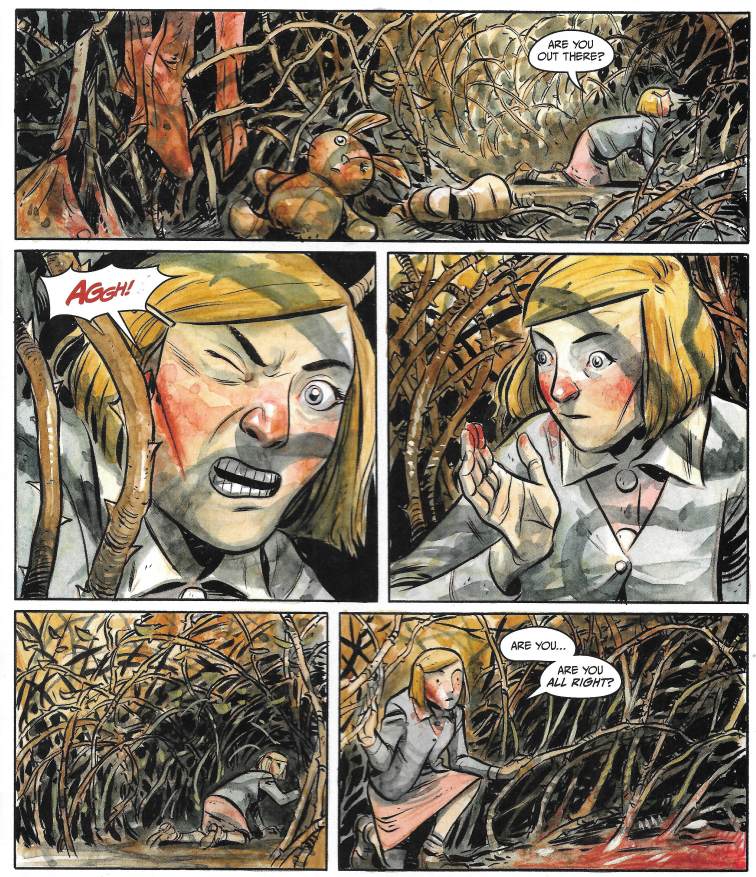 But that isn’t the worst of it. No, the strange unreality of this unknown youth only grows the further into the stickers she goes. His shed clothes and playthings are missed by Emmy. And by the time she has been badly scrapped, it appears he has been too, only moreso.
This is where the book turns the tables on us and gives a payoff that makes you want to know the rest of the tale. For the boy has shed more than clothes… 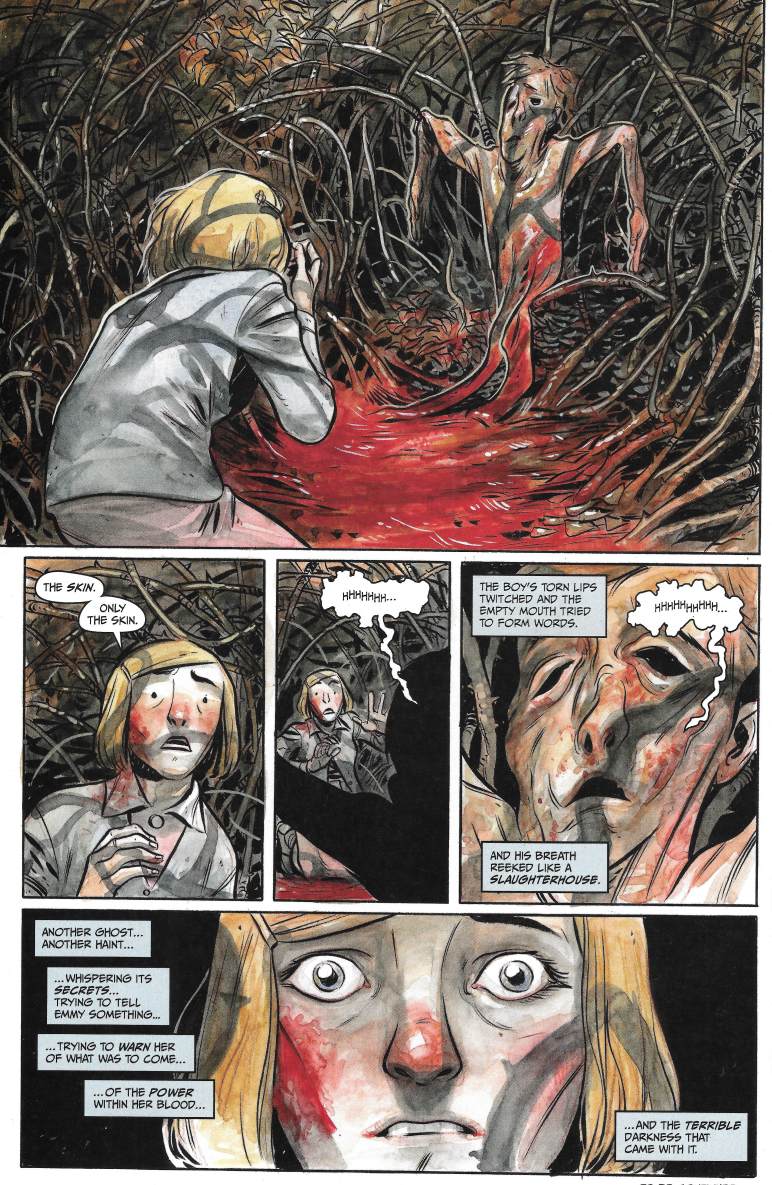 …and Emmy appears to feel a new power rising within her. What this means for her and her father, only the next issues would tell.

What a slow burn, hun? Great payoff though. And the back even has a one page “tale of the county” that reads like a good ghost story. 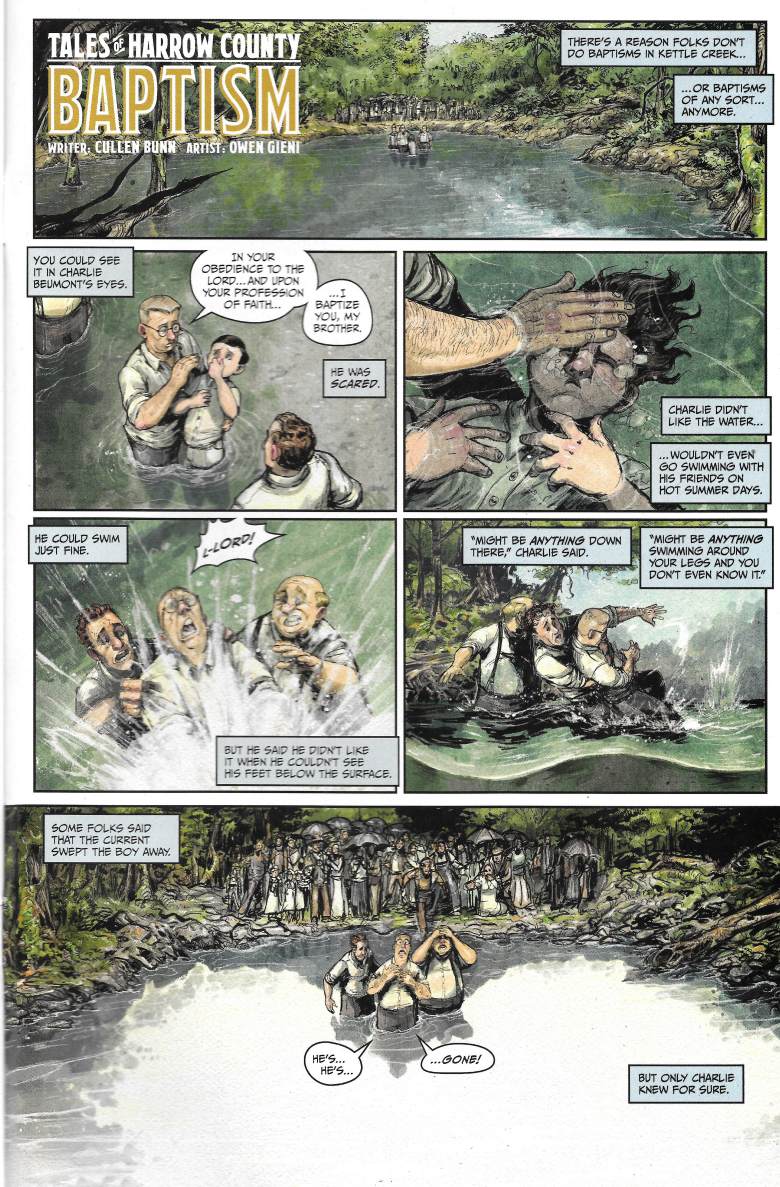 I like this one a bunch, and it is now on my radar to watch for the trades as they come down the pipe. It snuck up on me and I’ll admit to not expecting to like it as much as I did. The muted fall colors might have much to do with that. They don't really "thrill." But for a sleepy little story, this one sure left me with a case of the chills.
Posted by SonOfCthulhu at 4:56 AM