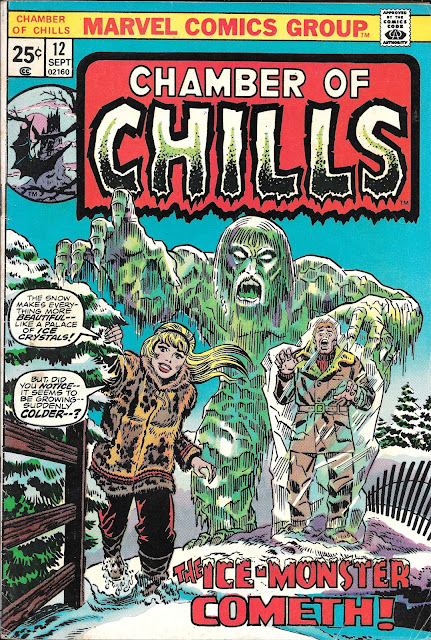 Netflix and Chamber of Chills?

Monster Menace wasn’t the first time that merry ol’ Marvel took a trip in the way-back machine to pull content from their Atlas days and sell it to a modern audience. One example of that would be the Chamber of Chills title, a title glommed off of an even older, short-lived Harvey comics book from the early 1950’s.

Marvel released it along with Supernatural Thrillers, Worlds Unknown, and a Thor-less Journey into Mystery under the auspices of Editor-in-Chief Roy Thomas in 1972 as a bi-monthly. The books were created in an effort to form a line of science fiction and horror anthologies. They had tried the same thing earlier that decade with Chamber of Darkness and Tower of Shadows books. It was slow going.

The first four issues were new material, but I suppose that got too expensive, so they switched to filling half the book with reprints and by issue seven, it was all silver-age material with nary a new story in sight.

Not that I mind, as these are new stories to me and it’s not likely the Crapbox will yield many/any Atlas era books. Ever.

But it did get this CoC issue, so let’s peek inside, shall we?

Deserved fate horror didn’t get any better than in the fifties, I’ll tell ya. We begin with this lonely traveler to the cold, isolated village of Wintersville, a place where no one is friendly. Seems all the locals are afraid of something known as the Ice Monster, a beast that…well, no one will talk much about. Not only that, but they won’t let a person in at night for fear of the Ice Monster getting them. 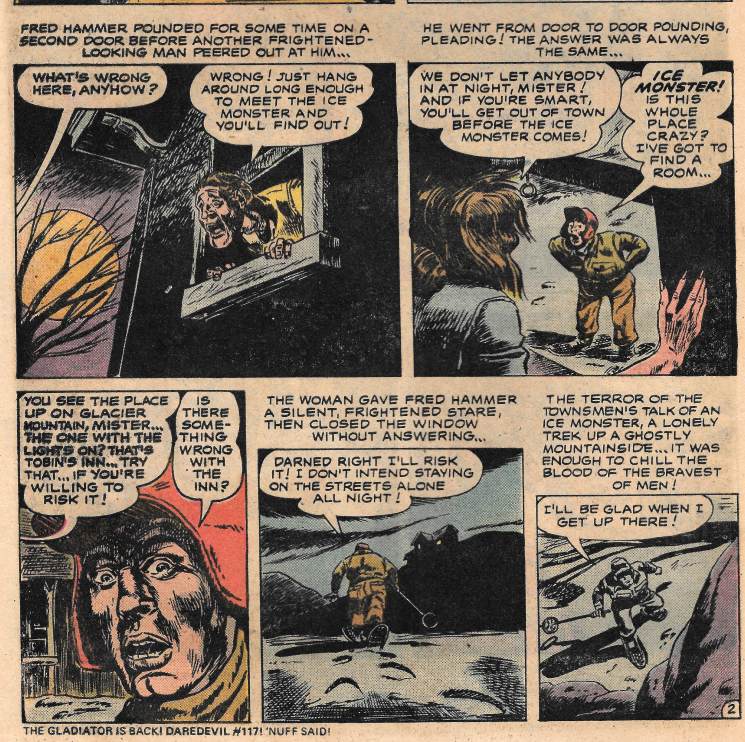 Sheesh! What this town really needs to be attacked by is the NICE Monster. Way to be friendly and kind, people – NOT!

So poor Fred Hammer strikes out for Tobin’s Inn, perhaps the only place that will give him lodging for the night. Surely nothing sinister will happen there?

Once there, he’ll meet Lucille and Jeffrey Tobin, husband-and-wife proprietors of the Inn, who will welcome him to their establishment. He’ll learn Jeffrey doesn’t like mention of the Ice Monster, especially after what the town people say about Jeffrey… 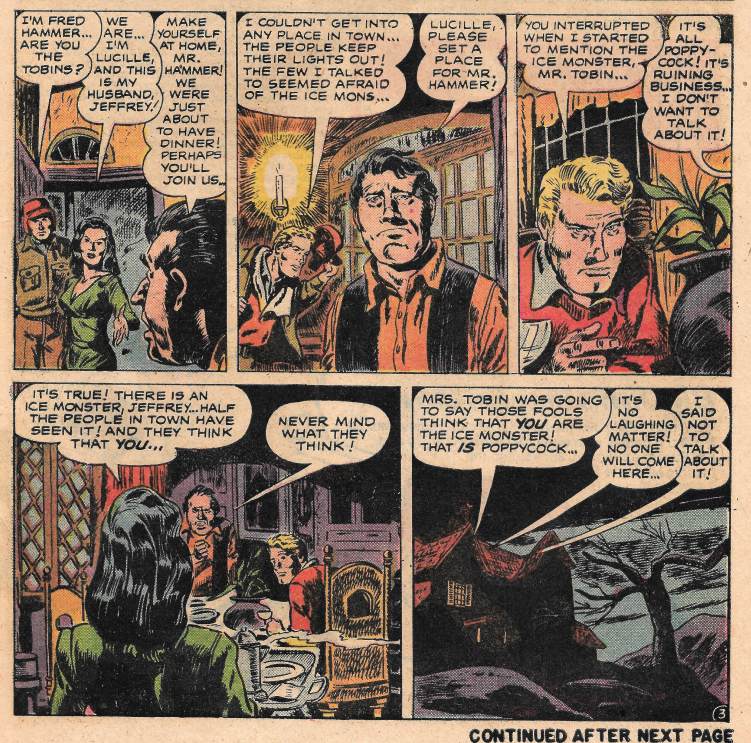 …because they totally think HE is the Ice Monster. I’m sure this will all end well.

Ice Monster or not, Jeffrey is chilly in one aspect for sure…taking care of his wife. First chance she gets she THROWS herself on Fred and vows that she loves him, that it was love at first sight, and that they’ve got to KILL her husband to get him out of the way. 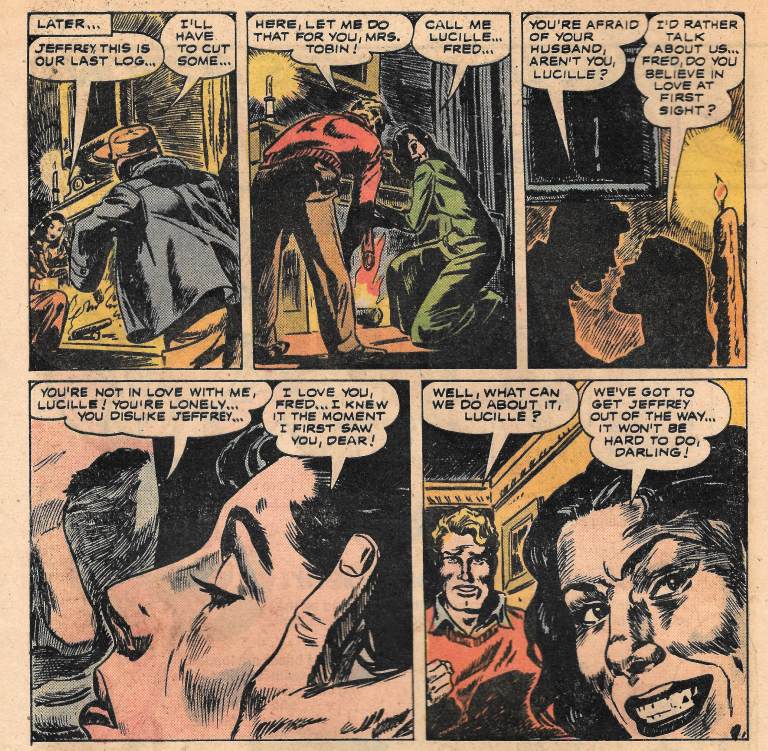 LADY, I JUST MET YOU!

Fred is a bit more gullible than that. Or more willing to kill someone just for a chance to sleep with a beautiful woman. At least I assume she’s beautiful. Hard to tell when the inker is drawing a million lines all over her face.

Anyway, a plan to kill Jeffery is hatched…

…and carried out. And Jeffery looks pretty flat under all the rubble, so he’s probably dead. But I’ve now got suspicions that Lucille is the Ice Monster now. Just look at that wicked smile. She’s up to something… 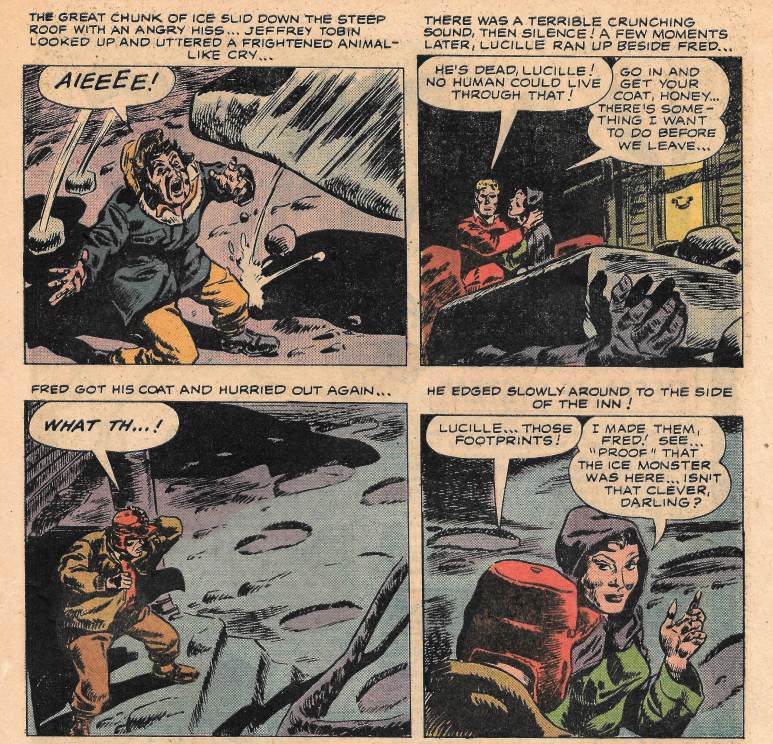 And she laughs “like a manic,” which is what the definition of maniacally is, and has Fred drive her to Wintersville to tell the police their version of what happened to Jeffrey. 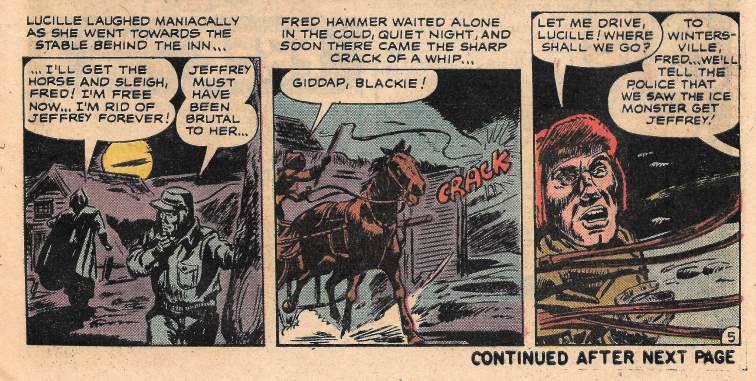 And she professes her love for Fred again, but this time he’s a bit slower to respond. They end up not in Wintersville, but in a cave. And if you were worried about Fred biting it all this time… 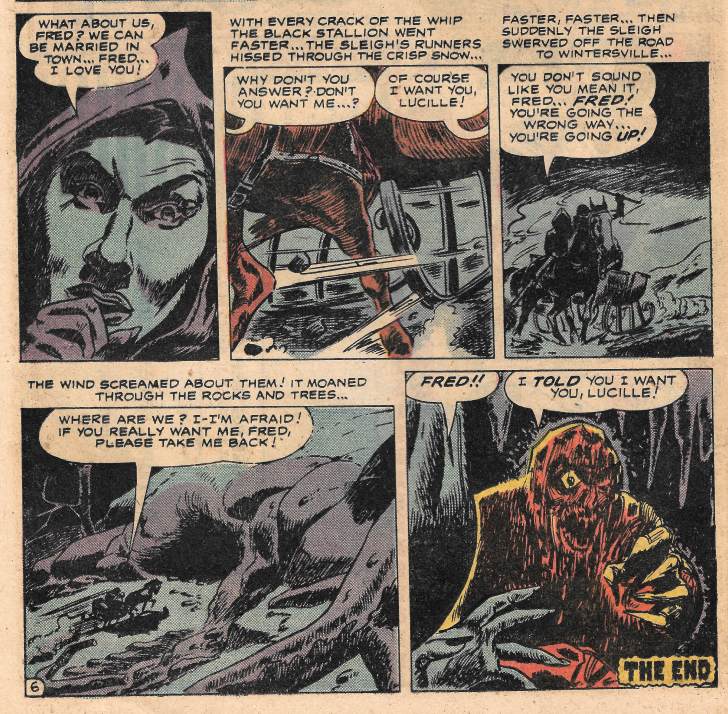 …your worries were seriously misplaced. Fred is the Ice Monster. And that’s why you always turn people away for the night.

Have to admit that this one had me guessing until the very end. Nice little story they have there, the only weak link being certain panels of Colon’s art. And I’m not even certain it is all him and not just a heavy-handed inker that is at fault.

Where to next, “Chills”?

Okay, so seriously. This one is about an artisan who builds intricate clockworks called “Weather Houses”. They depict an old woman chasing a robber. 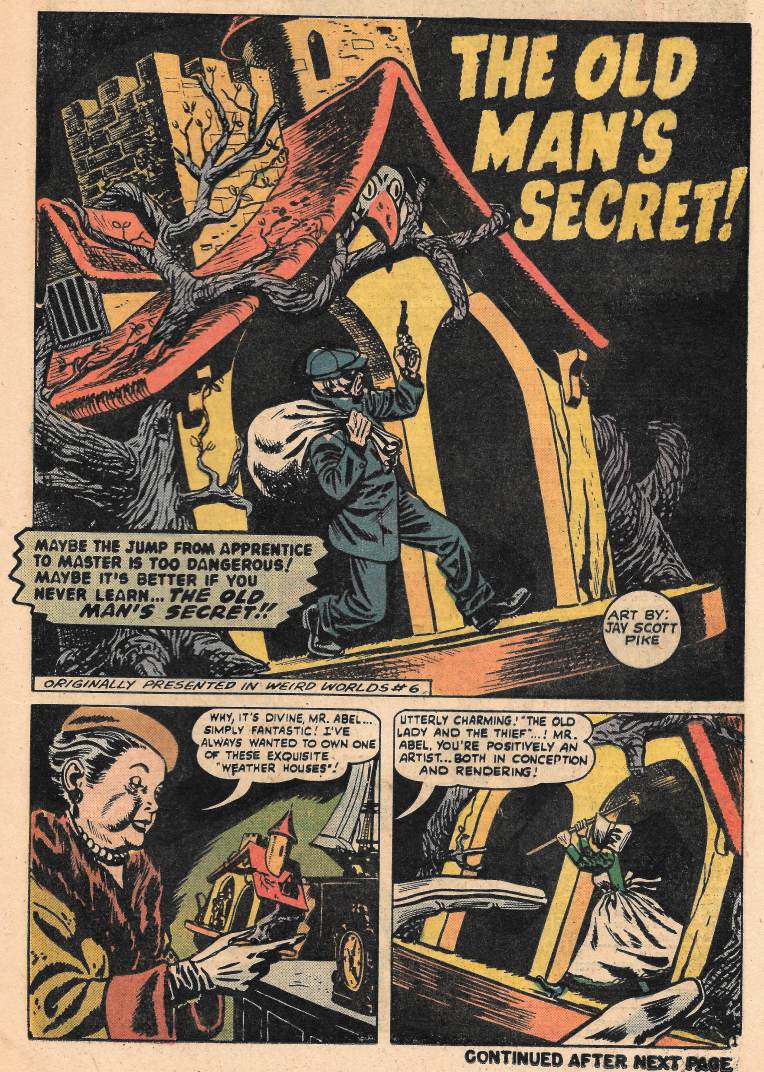 They work like…aww, I’ll just let the lady tell it…

However, the faces of the figures on this one are too grotesque for the patron, and she passes on it. All of this information is overheard by this fool, Jacob Able’s cleaning boy and apprentice. He is greedy, stupid, with too much ambition, and immoral. Let’s see where that leads him, eh? 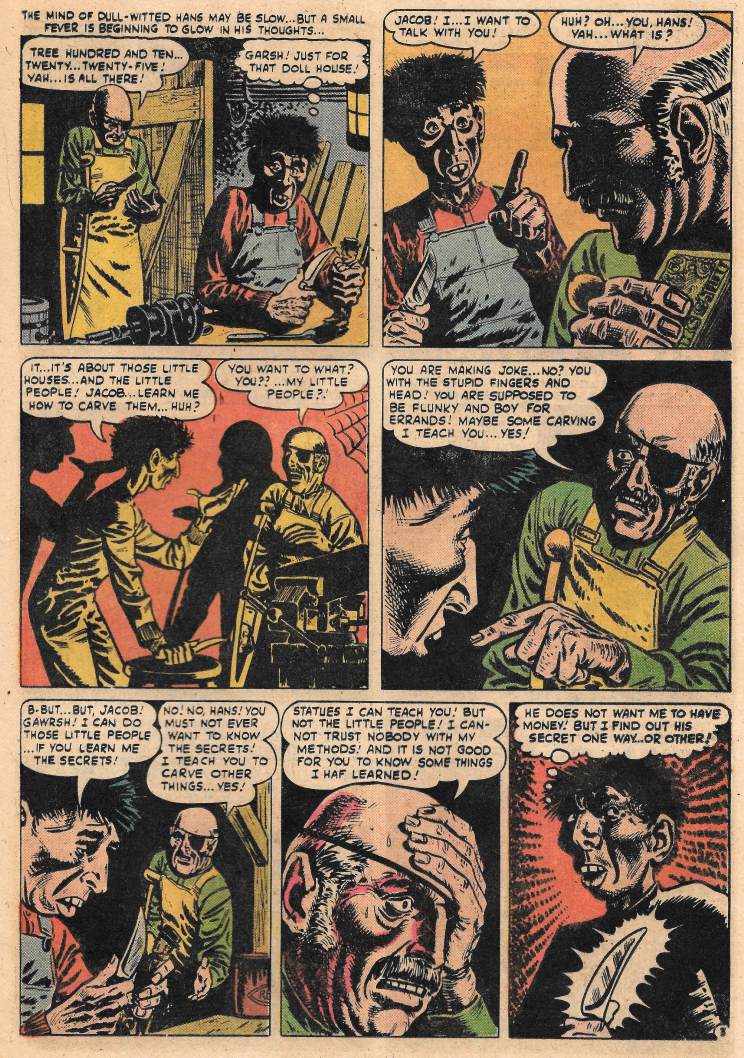 That flashing blade looks to me like it leads to murder. But how will that help him get what he wants? Maybe he’s brighter than he looks and has a PLAN? 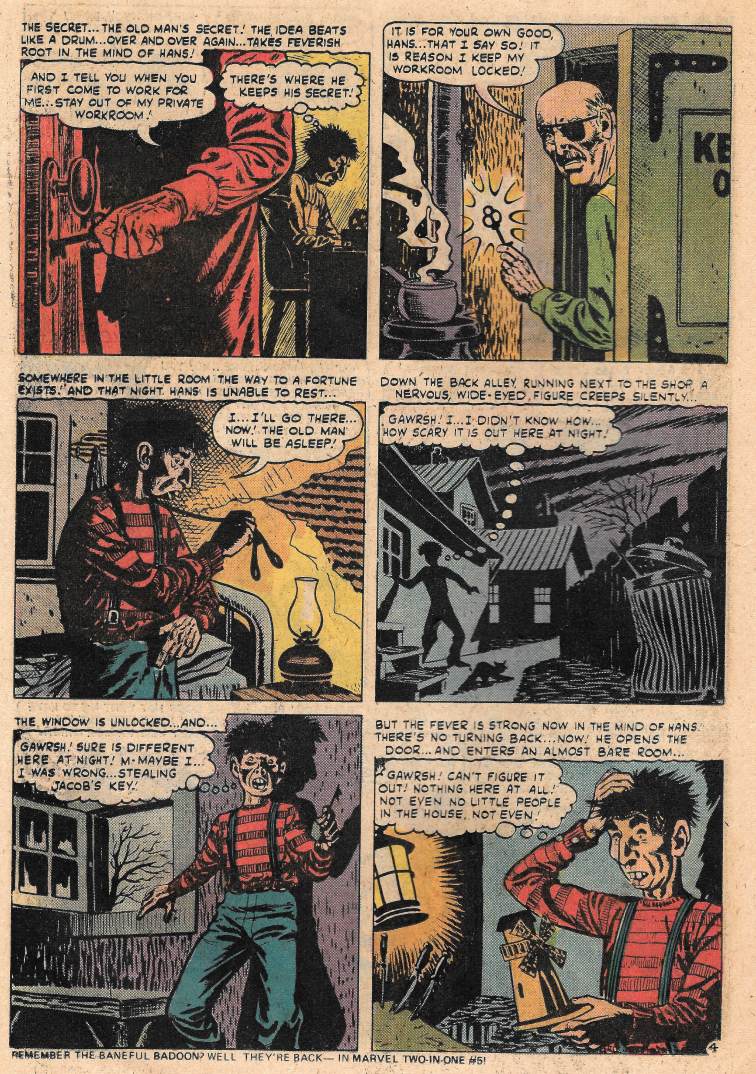 That’s pretty good. You go right ahead: break in and steal his secrets, human-Goofy. But Gawrsh, I don’t think you are smart enough to understand what you even find.

And when the shopkeeper catches you…you might just learn something about how those Weather Houses are made in a manner you didn’t expect. 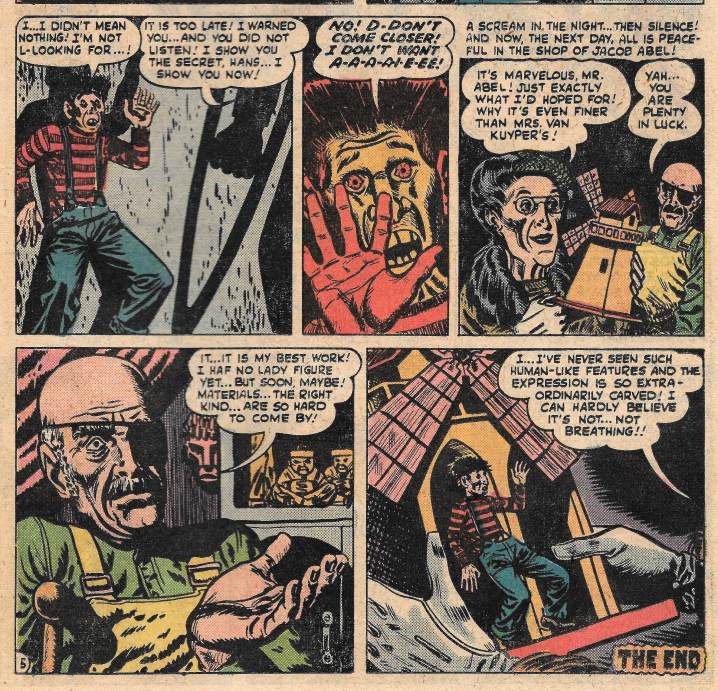 Nice twist yet again. I’m kind of starting to warm to “Chills.” What else you got?

We begin this tale with this greedy asshole named Casper Green. I’m giving you a full page scan here because I have to show someone that weird graphic at the top with all the character heads with Nixon jowls. So. Very. Odd! 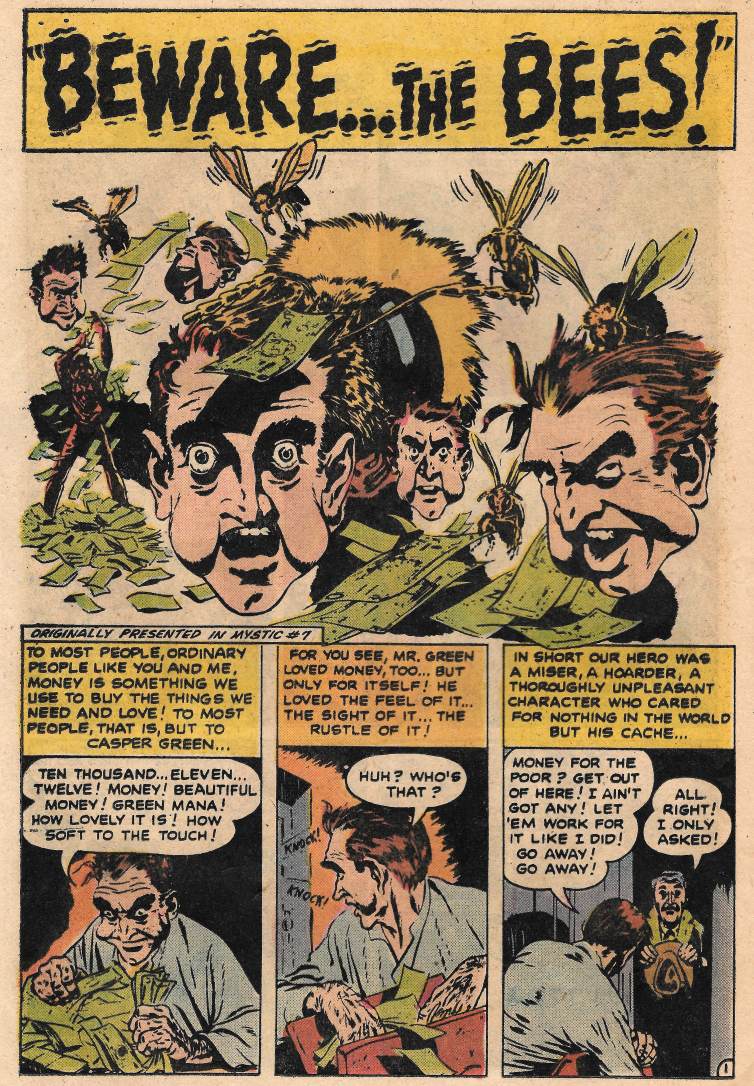 Anyway, Casper Green is a greedy jerk who wouldn’t give his mother a quarter to help pay for her life support. We can tell already that we are going to root for something awful to happen to good old moneybags.

His loan sharking allows him to strip this poor young woman’s means of making a living, because he is a total prick. 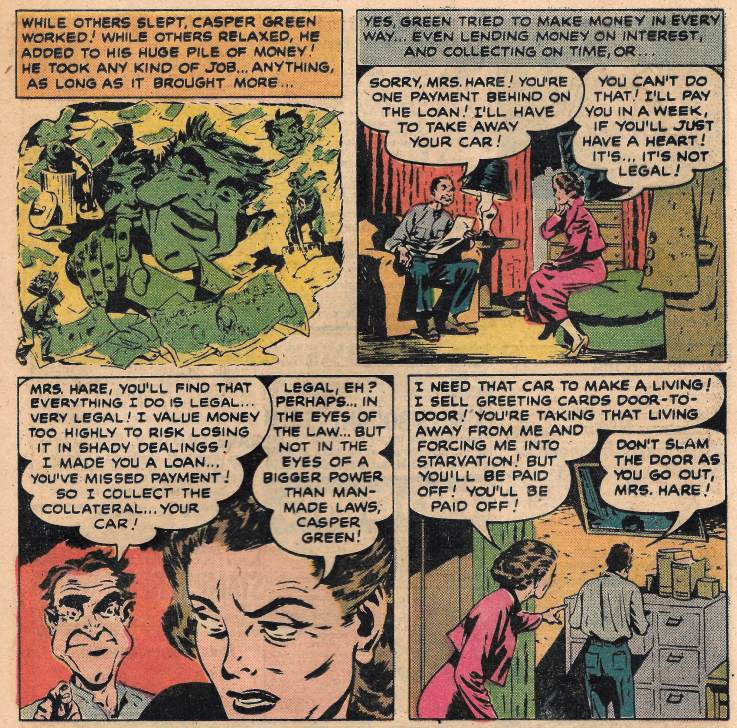 And using said car allows Casper to find a job out in the boonies where he can earn a hundred dollars a week doing some kind of work on bees. Experiments and such with the kindly Dr. Silvana there. Sure. Easy money. 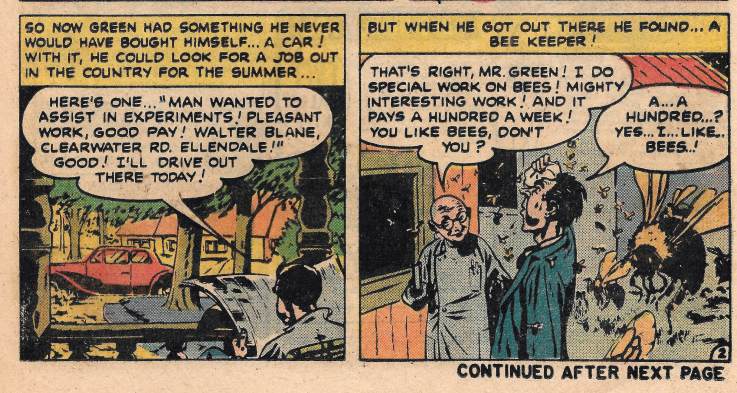 All was going fine until one-day Casper did the wrong thing and started a chain of events that ended with him getting stung by the bees. This put his job in jeopardy and we know how much money means to Casper… 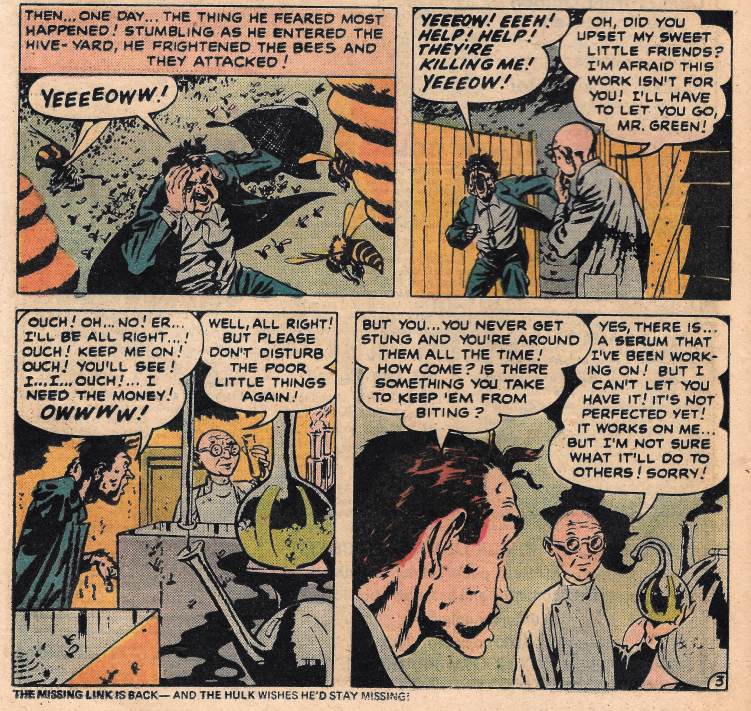 …so he stole some of the experimental serum for himself, and surprisingly it worked like a charm. And here I thought he would bee sorry for taking it…(I've held off using that joke until this far into the review. That's pretty good for me, don't you agree?) 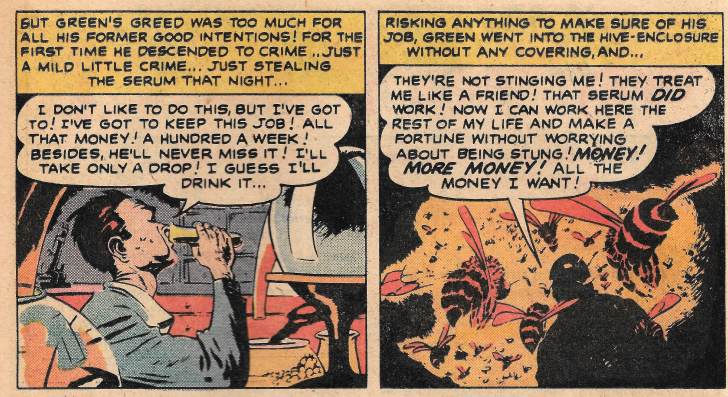 …maybe he will when he gets home. Except Mrs. Hare has this reaction to his dressing her down.

For you see, that serum really wasn’t ready for Casper. 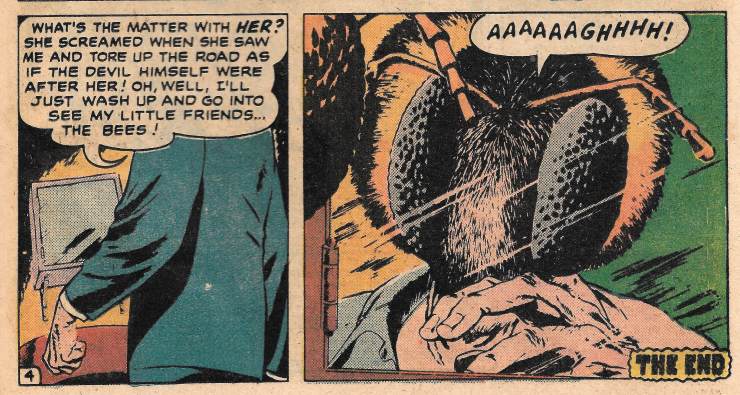 That was a bit of silliness, but still doing good. Now on to our last reprint.

As soon as I saw this story’s title I was reminded of “The Rocking-Horse Winner” for some strange reason.

Not to worry, there are no sexual or Oedipal overtones to this horror short. They do both share a dash of the supernatural and some tension between a boy and his male father figure, nasty Uncle Jonas.

Here’s Teddy ramming the handle of a broomstick under a blanket and playing like it’s a train. 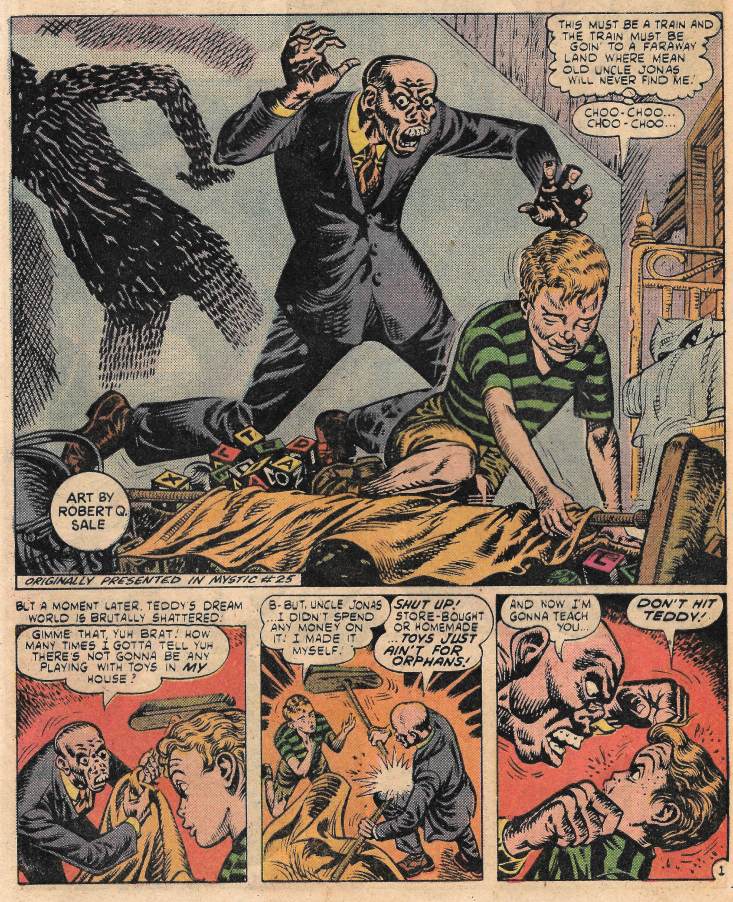 I take back what I said about there not being any sexual overtones in this story. How many overtones depends on the amount of broom-pole-going-into-things we have. Anyway, after breaking the broomstick (Jonas? You know that you are the person who paid for that broom, right?), Uncle Jonas’ abuse is interrupted by the downstairs neighbor. Jonas threatens him so the man reluctantly leaves. 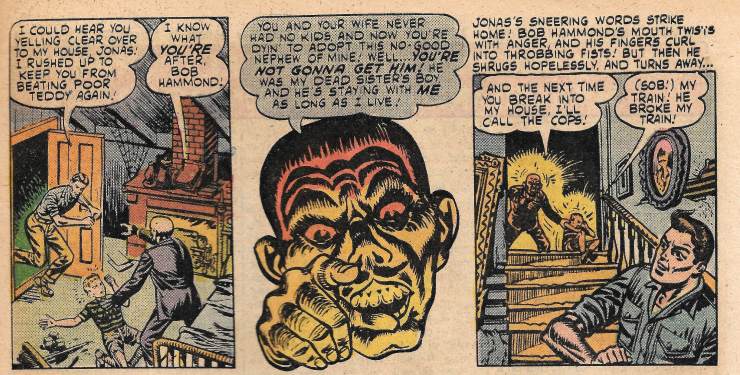 And Jonas takes up where he left off. I feel the protagonists of both this story and The Rocking-Horse Winner might end up in the same state after seeing all this.

At least I did until Teddy starts hearing his name called from outside his window. Then I start thinking of that scene in Salem’s Lot with the boy at the window…(shivers)… 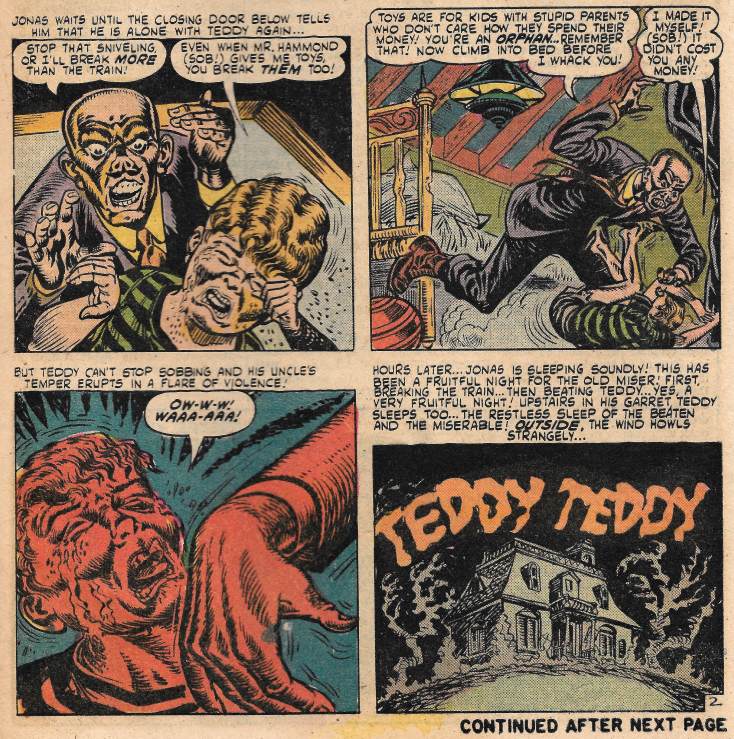 …but no, it is some weird ghostly version of Santa, who leaves Teddy his heart’s desire. His own toy train. 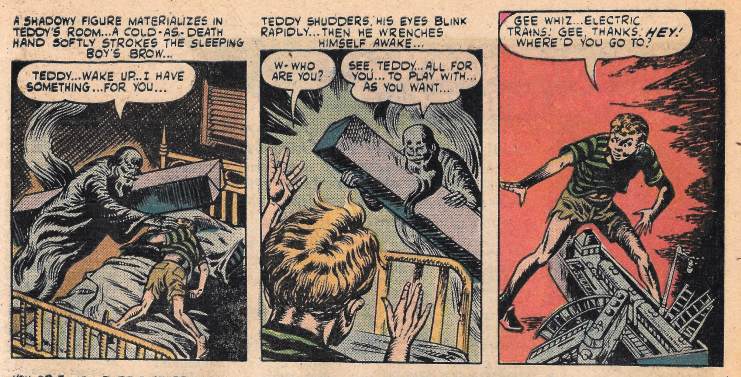 And possibly some LSD, as Teddy soon believes he is shrinking down to the size of the model railroad set. 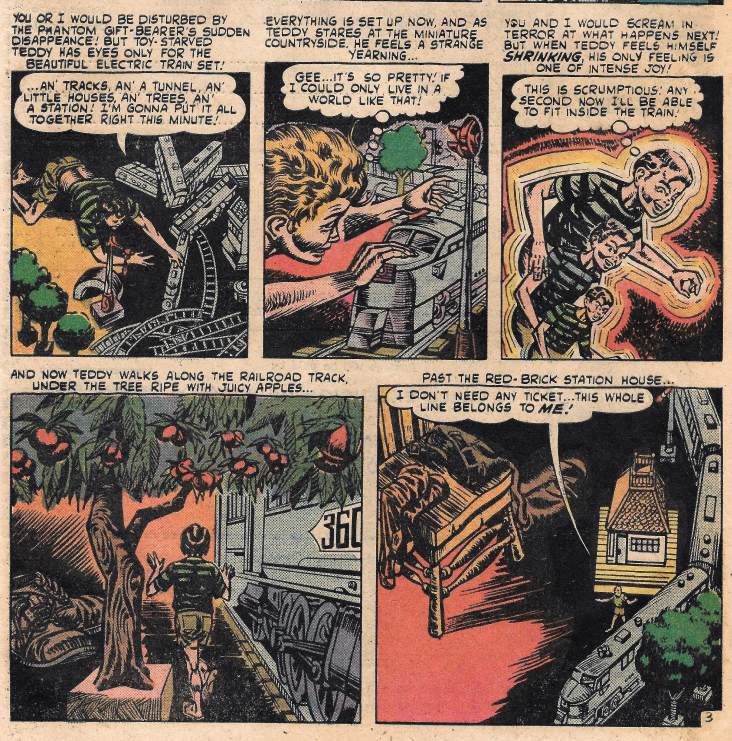 All that mirth sets off Uncle Jonas’ happiness radar, so he bursts in and finds the toy. Enraged he attempts to smash it… 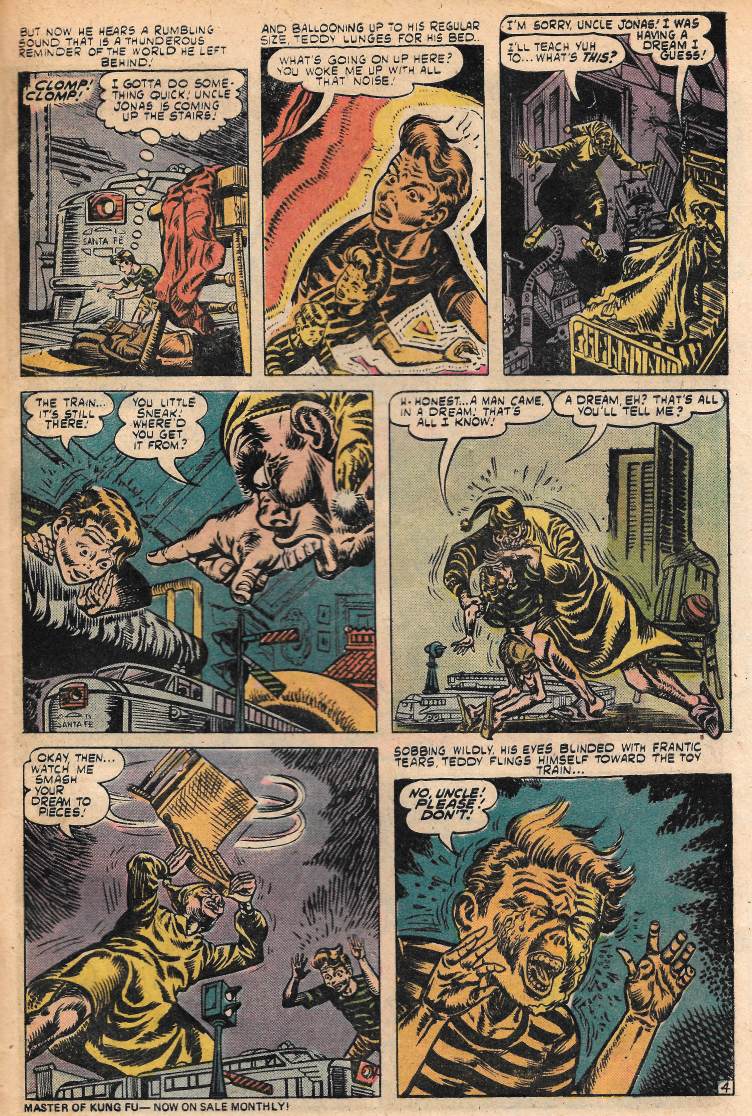 …But Teddy shrinks down and RUNS HIS BITCH-ASS OVER! 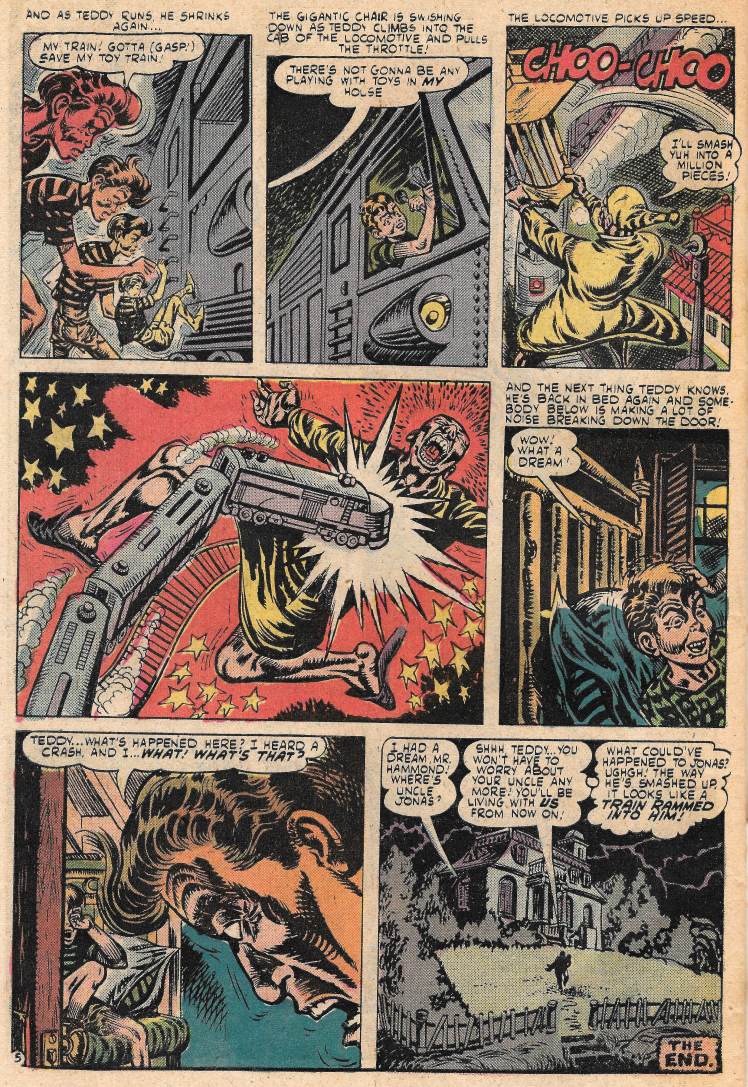 And Teddy and the downstairs neighbors live happily ever after. Their brooms a bit less so.

Chamber of Chills got permanently defrosted with issue number 25 in 1976. Tracking down those first seven issues sounds like it might be fun for someone. They looked to have some good new material in them.

And if you see one of these in the discount bin and are in the mood for old school storytelling, you could do worse than to pick it up. Just remember to dress warmly and handle the issue while wearing your Winter mittens.
Posted by SonOfCthulhu at 3:34 AM