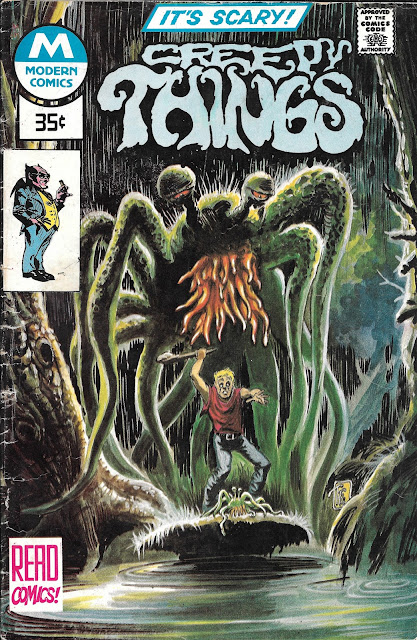 The closer it got to the 80’s, the worse things looked for Charlton comics. Taking a page from Gold Key Comics it decided to reprint a bunch of its old titles in bagged sets sold in department stores. Gold Key was reprinting Whitman Comics. Charlton decided to milk their back catalogue by issuing these under the Modern Comics emblem so as not to sully their main brand name.

This method of padding the bottom line with stock stories didn’t work out well enough to save Charlton, but it did give new readers a chance to be exposed to their older stories. I was one of those readers and this is the very book I owned.

“The Greatest Treasure”
Writer – Joe Gill
Artist – Nieto
We are back with another book 2/3's full of Joe Gill tales, perhaps comic’s most prolific writer. Definitely Charlton’s most prolific, as it appears he wrote their entire catalogue.

We begin this tale with a guy doing something immoral to attain fame and fortune, thus telling us we will be reading a Deserved fate tale. 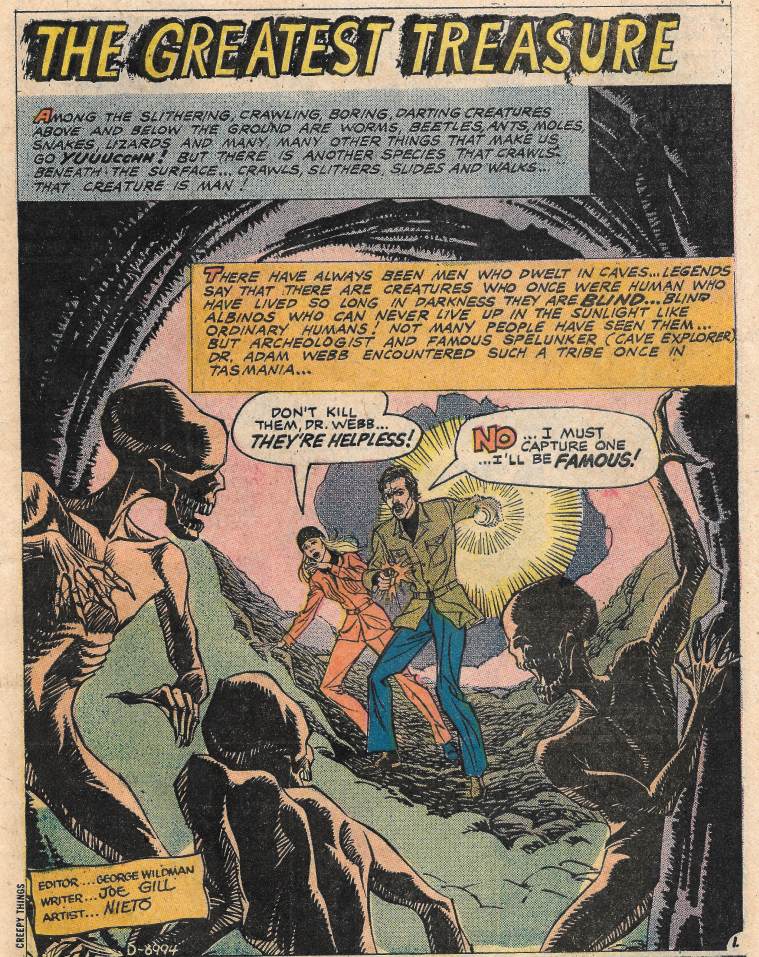 Meet Dr. Webb, everyone. He is quite possibly the worst “explorer” ever, seeking only self-aggrandization. I have no clue exactly the world he inhabits, but it is a fairly odd place. First off let’s show a bit more of it. 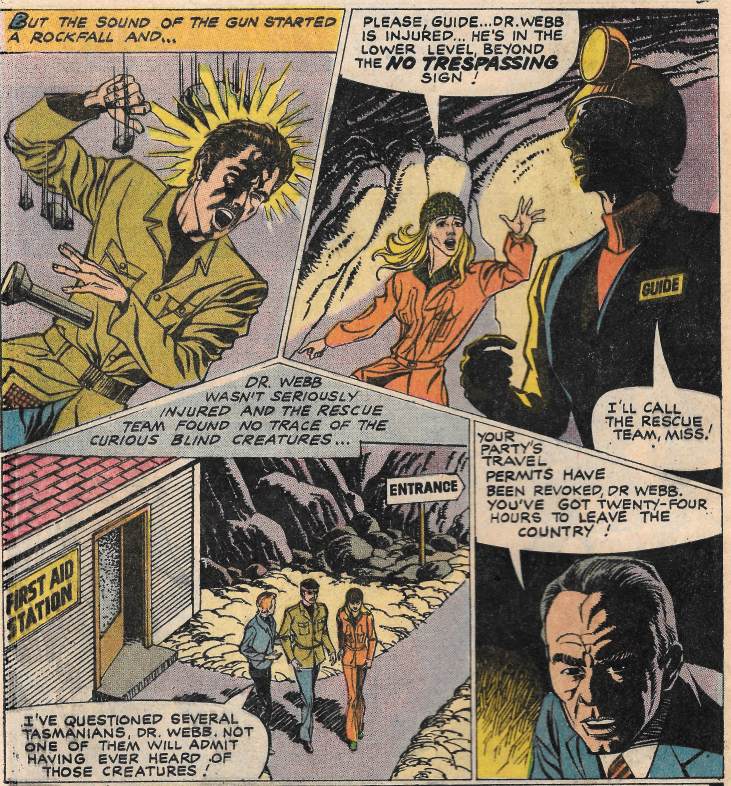 Near as I can put together, this is occurring in a tourist attraction. I say that because there are not typically guides running around every cave wearing cute little badges. And the left shot after the events in the cave occurred have a big “Entrance” sign with an arrow right next to what looks like a first aid station on concrete paths. It screams amusement park at every turn. So that begs the question: Why did Dr. Webb think that “blind creatures” living in caves IN A TOURIST ATTRACTION would in any way be a big find? Surely people see them every single day?

I don’t really know or understand it, but the results are enough for him and his cute blonde companion to get thrown out of the country.

Which is fine for him, because he’ll just head to South America next, bringing the girl and her boyfriend along for the ride. They didn’t want to go, mind you, but somehow they were going to get their funding cut if they didn’t tag along with the “good” doctor. 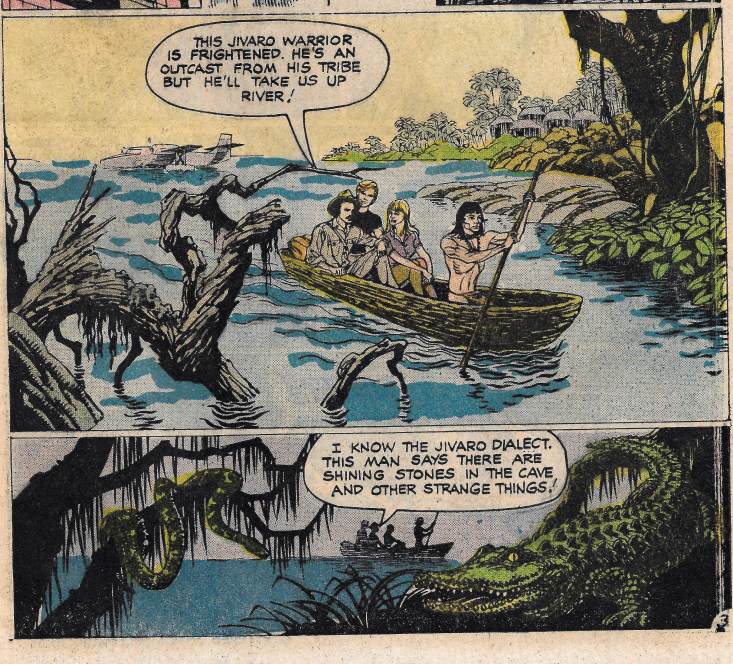 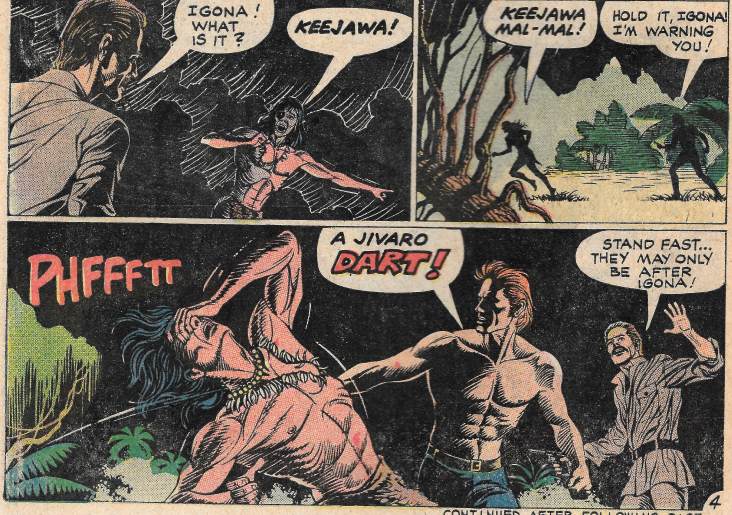 Yeah, well who didn’t see that coming? No one. However, what happens next in the story IS fairly unexpected. 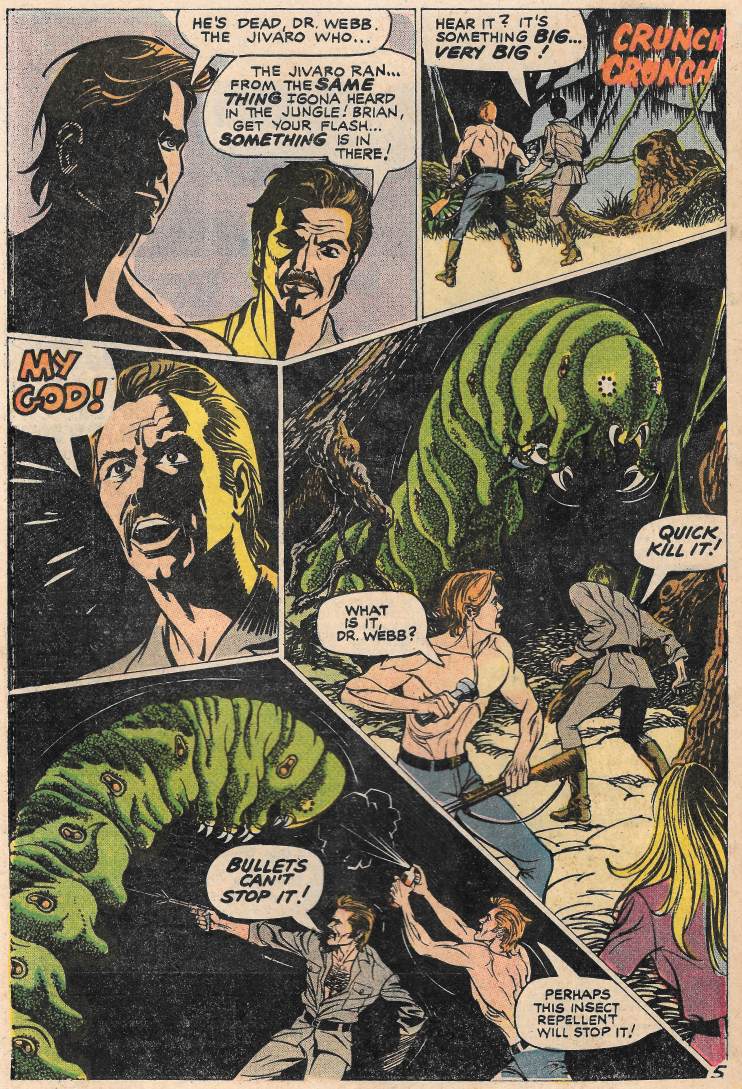 I did not see a giant caterpillar attack coming. It’s getting all “Alice Through the Looking Glass” in here. Also, notice that bullets CAN’T stop it… …but a can of Deep Woods OFF! and it high-tails it out of there.

Unperturbed by his lack of guide, Dr. Webb insists they continue on. And untroubled by the crazy, idiotic crap happening around him, Brian and Heather are still fine with following him.

The trio find an emerald buried in the cave wall at head height and discover traces of fresh vegetation, almost as if the emerald was planted there. Dr. Webb seems to think it was the same tribe that killed their guide, but screw it – let’s go deeper into the caves they appear to be leading us into… 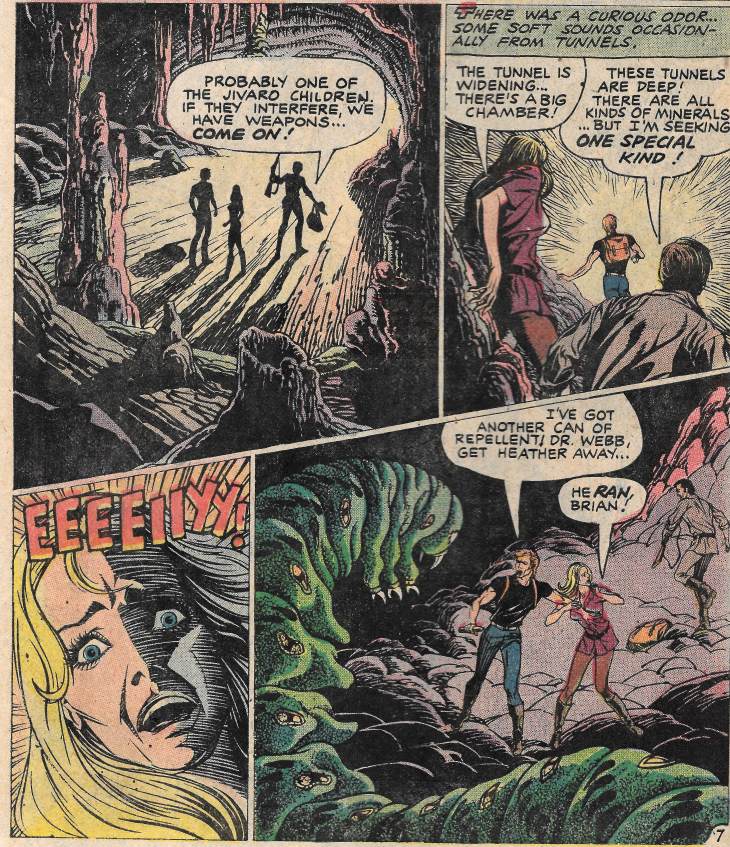 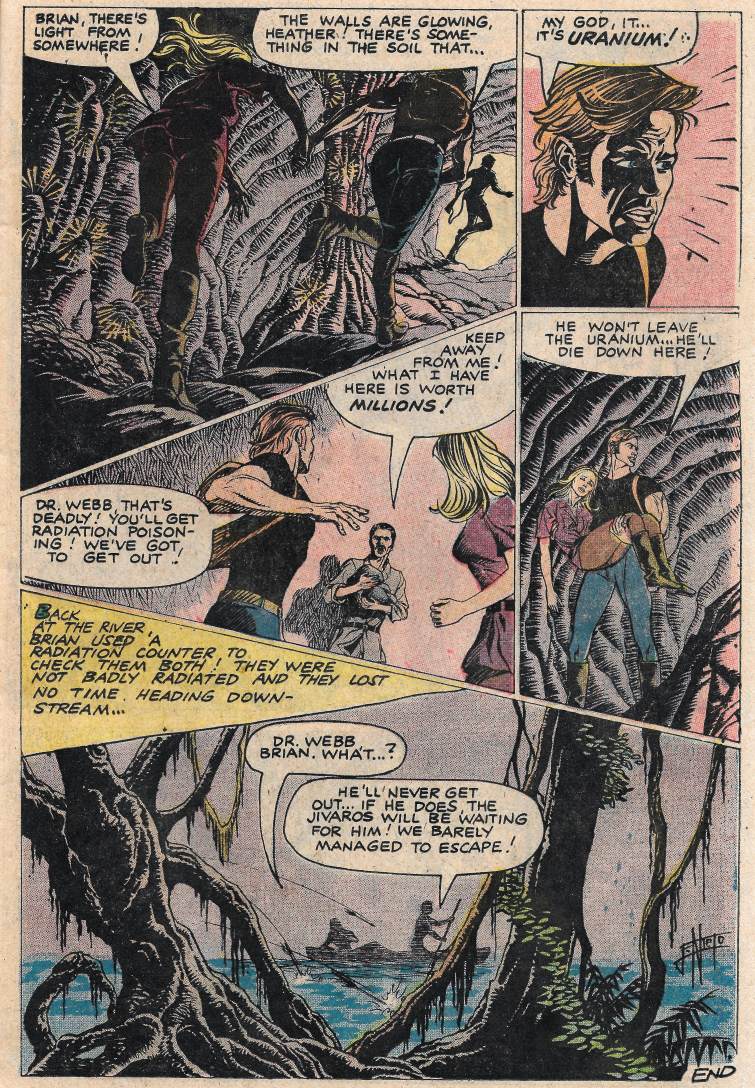 …Wait! What? Let me get this straight…the doctor sent them back thinking a cave full of radioactive poison made him somehow rich? Instead of trying to get out and stake a claim to it, he hung out in the cave of million X-rays? What an odd wrap-up. Almost like someone ran out of story pages as they neared deadline…

This was just too bizarre to really enjoy as a horror story. Too many weird goings-on and things you must suspend your disbelief of to make it through the story.

On to our next tale, though. 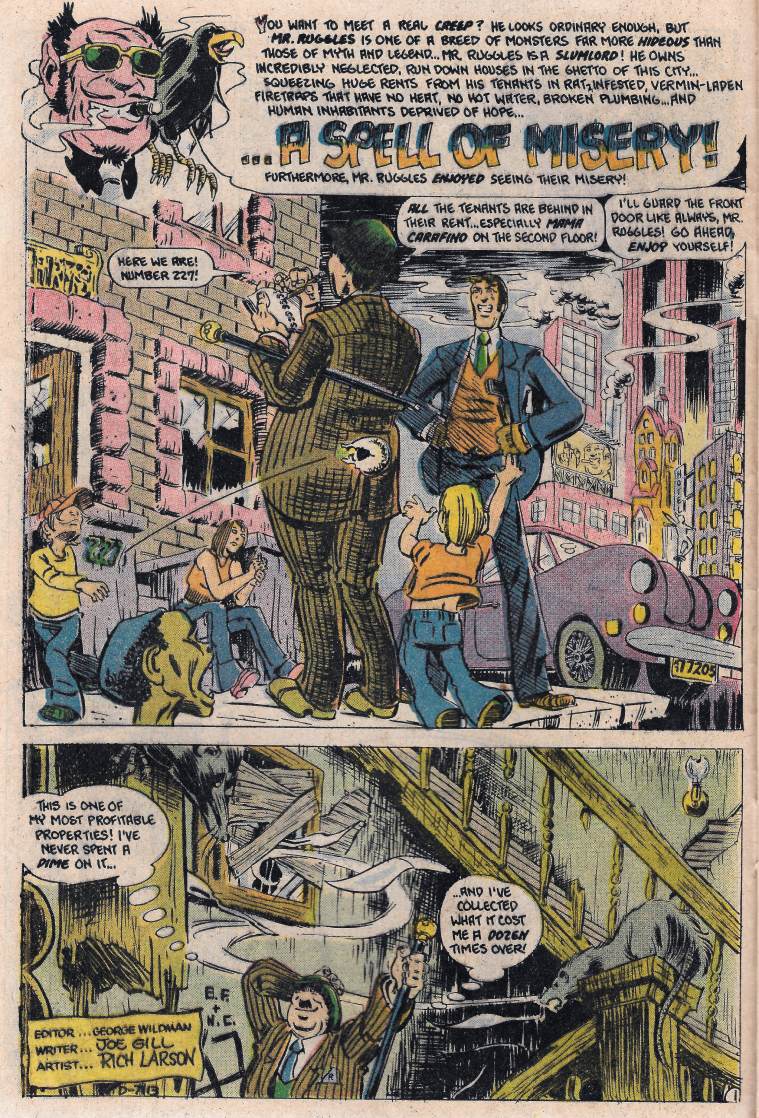 I could have sworn these pages were done by Joe Stanton, but second glance proves the name on the box reads Rich Larson. Maybe you’ll feel differently, but I think the art styles are very similar. Get ready for another tale of jerk getting his just reward, this time a horrible, greedy landlord. 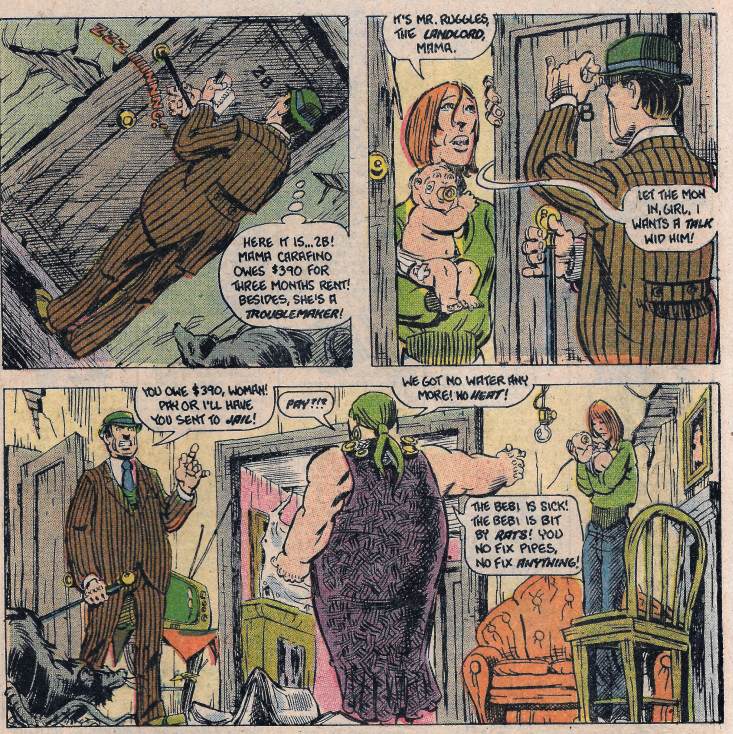 A landlord that runs afoul of a voodoo gypsy priestess, Mama Carafino. She is one of his boarders who suffers under the improper care he takes of his property. Because of that, she is withholding her rent payments from him. 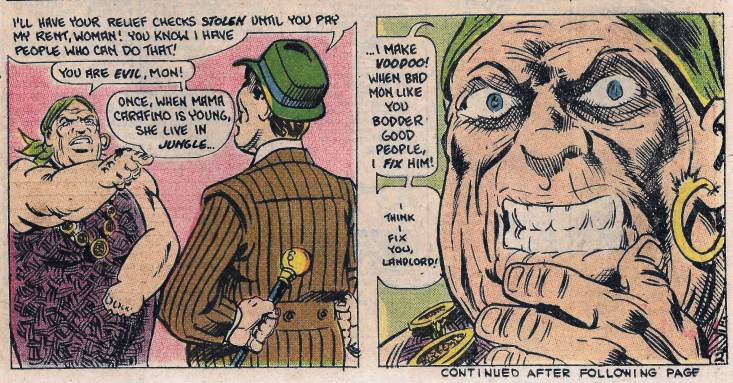 And when he threatens her, she’s ready to do more than that. I guess he shou’na bodder good people like her if he did didn’t want a little voodoo curse. 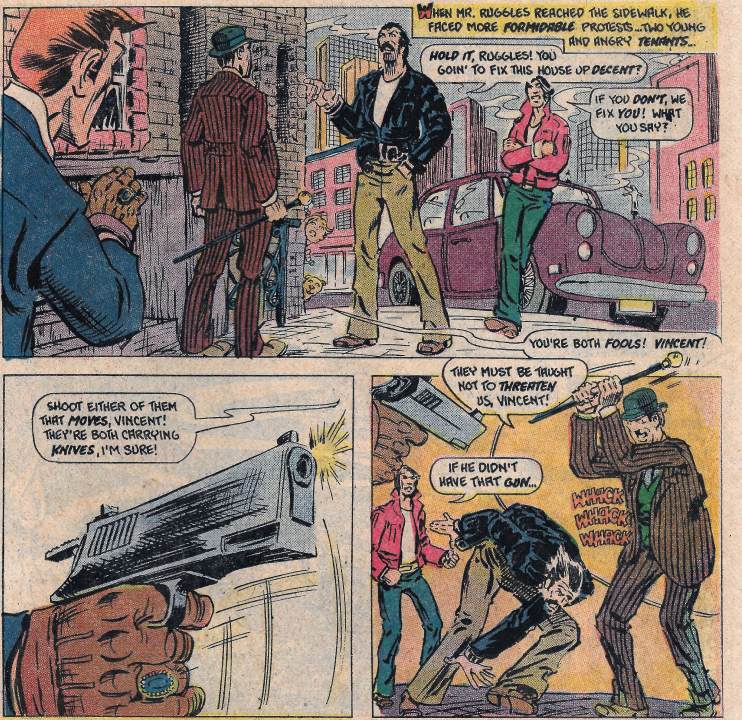 But first, our slumlord must make it past these two violent thugs, who threaten him with bodily harm if he doesn’t fix up the apartments. Unfortunately for them, Mr. Ruggles’ bodyguard is armed and Ruggles himself swings a mean cane.

Upstairs Mama Carafino comes to a fateful decision. A decision to pick back up her voodoo craft to take care of Mr. Ruggles once and for all. 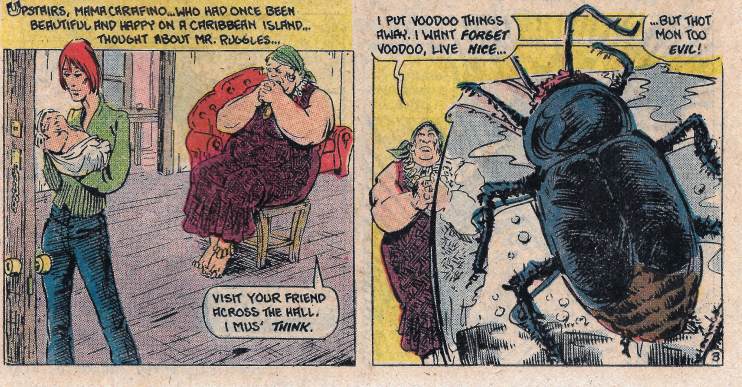 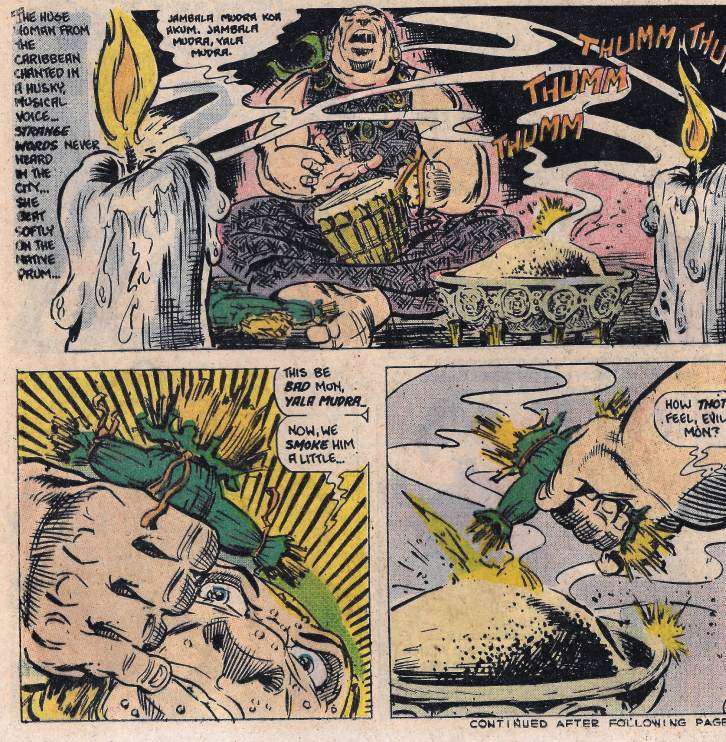 …then gives him a pounding headache… 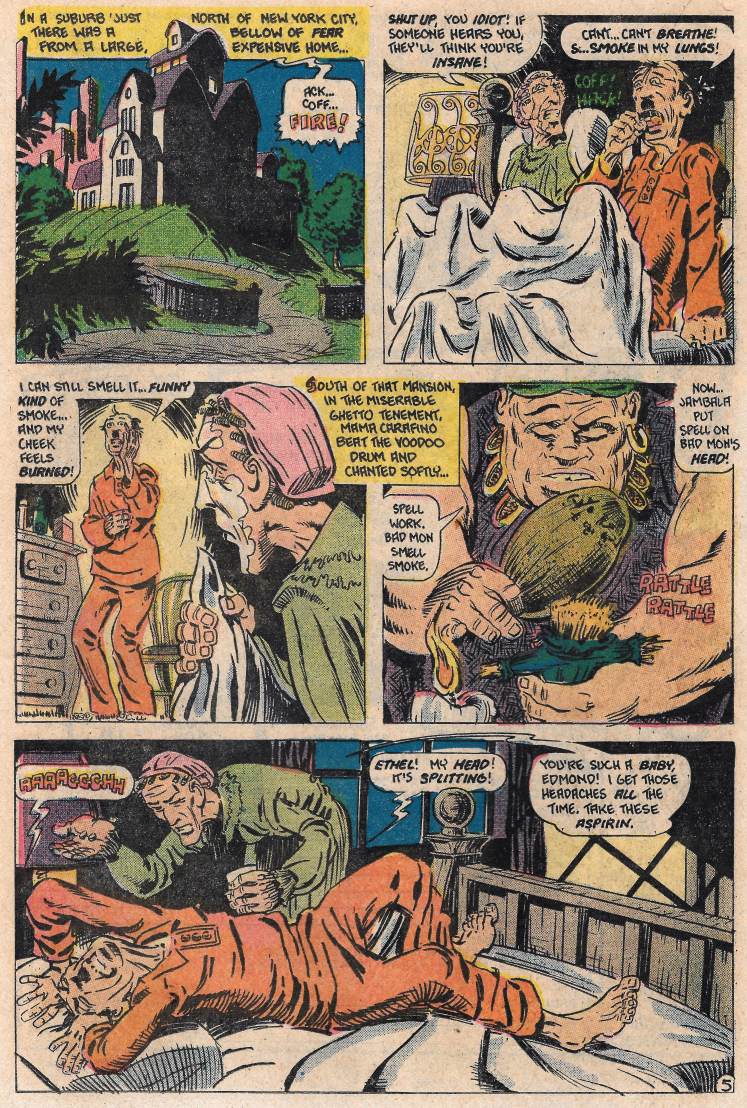 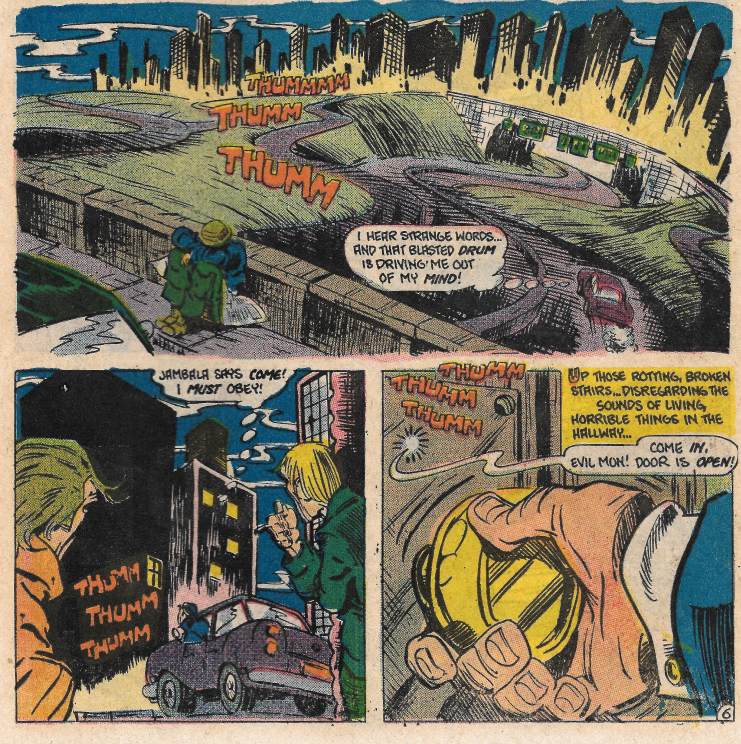 Once he arrives there, she shinks him down to the size of a bug, making him easy prey for a local rat. A rat that is only in the building because he hasn’t put in traps or paid to have them exterminated. 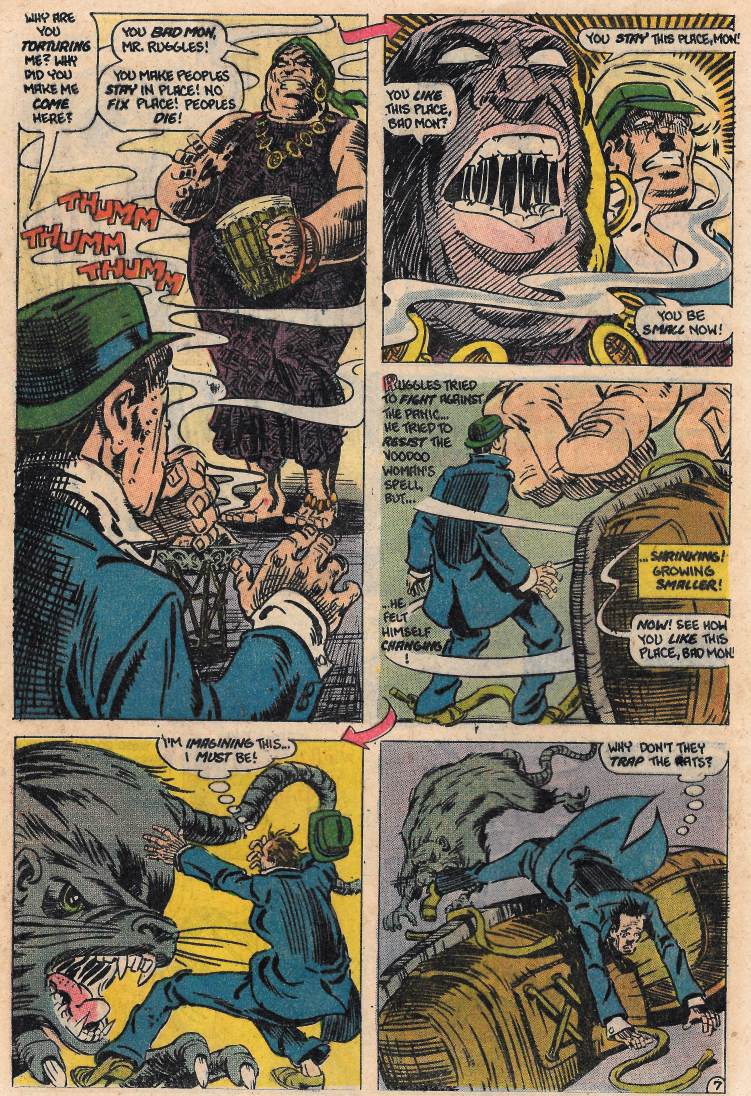 After avoiding the rat, Ruggles is menaced by a cockroach before being plucked up by Mama Carafino by the scruff of his collar. She lectures him on all the bad things he’s done. 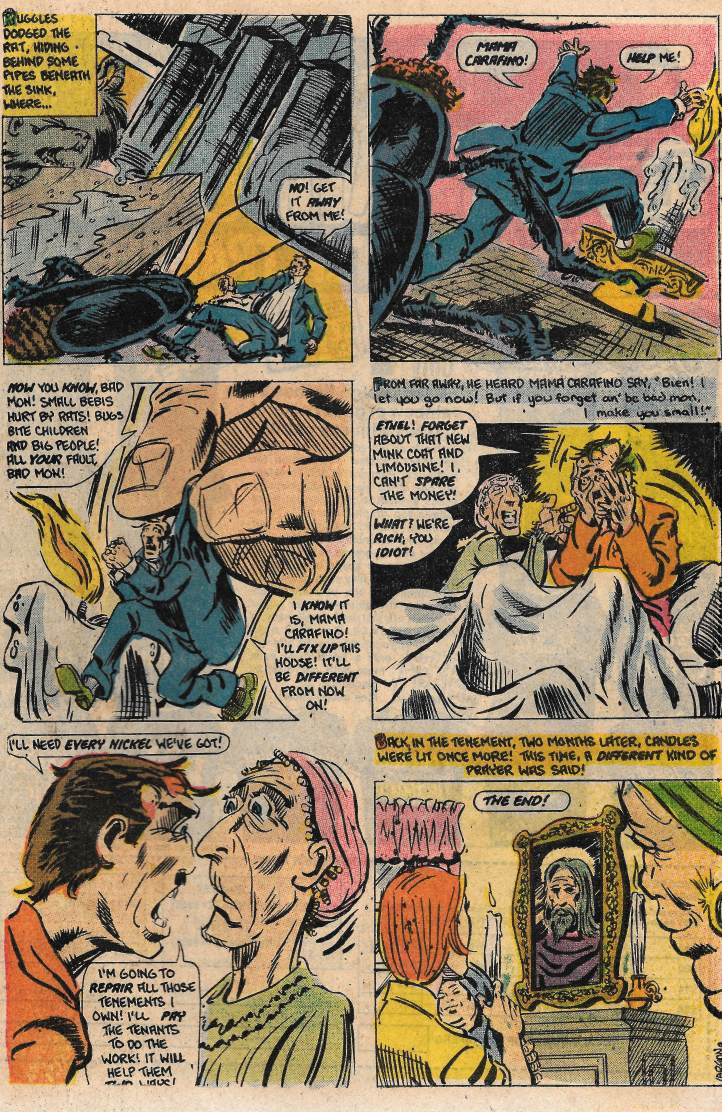 Even though Ruggles wakes up in his own bed, it appears he’s a changed man afterwards as we learn that he does clean up both his act and his tenements.

This was a decent story. The cartoony, Staton-like vibe of the art thrilled me, making me wonder if, between Staton and Ditko, Charlton had a “house style” for their books. Pete Morisi’s work aside, I could almost start to believe it.

Only thing I didn’t like was the awkward denouement with the picture in the last panel. It again feels rushed and makes it seem like they don’t want to infer that Mama Carafino’s working miracles would turn everyone to worshipping voodoo. Which it probably would.

Now let’s get a little dirty, shall we? 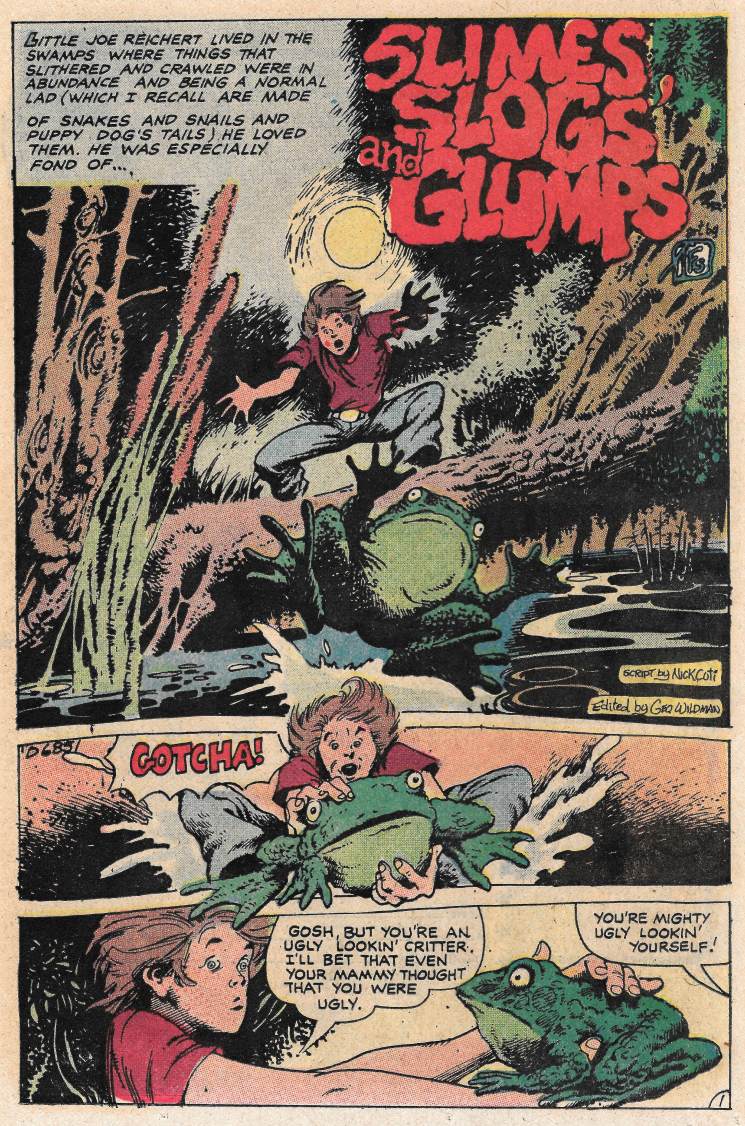 Our only non-Gill story in this comic follows little Joe Reichert as he explores the depths of the swamps near his home in the story alluded to by the issues cover. And while he’s out catching wart-covered toads one day, he meets a new friend. 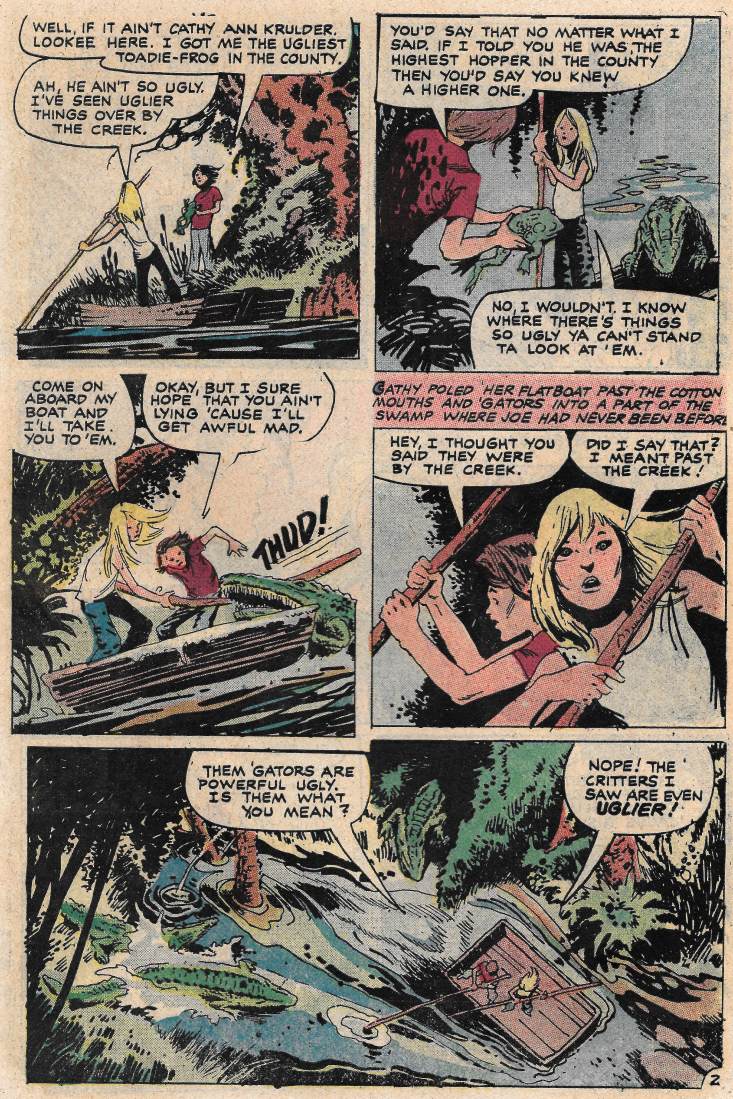 Cathy Ann Krulder and Joe engage in some really fun dialect-heavy story building. Note that Cathy appears more swap spirit than person in some ways, not afraid of its creatures and knowledgeable about its rules. I liked this story setup so much because I had NO idea what I was supposed to be afraid of: Cathy, the swamp creatures, or Joe’s desire to get the better of her. Who was going to end up the victim in this tale?

Cathy takes Joe DEEP into the everglades, to areas he’s never seen before and introduces him to all kinds of weird and terrifying grotesque little reptiles. 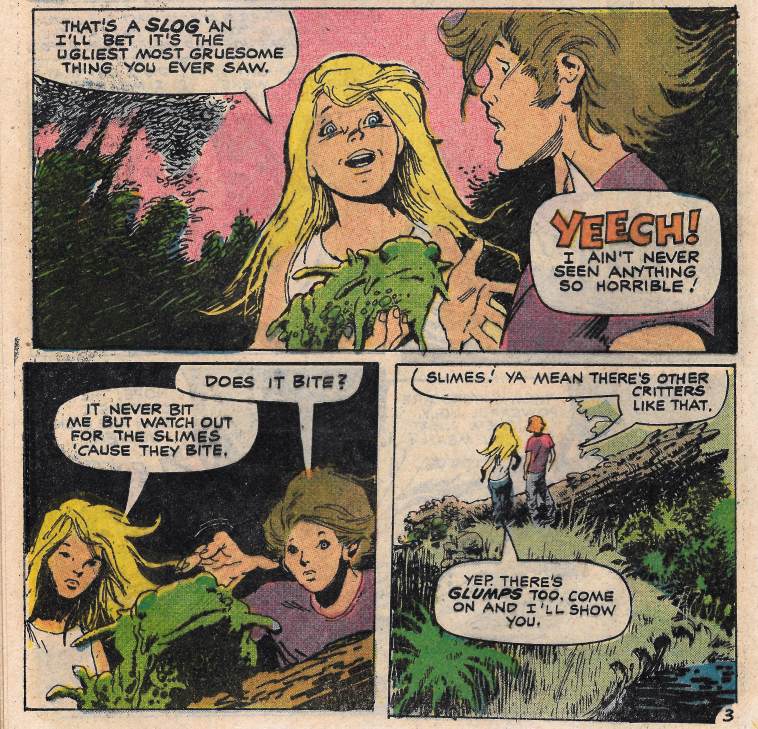 We meet back up hours later with Joe, coming home from his swap excursions ALONE. Or at least “mostly” alone. And yes, I’m wondering what happen to Cathy and the story is misdirecting me all over the place. 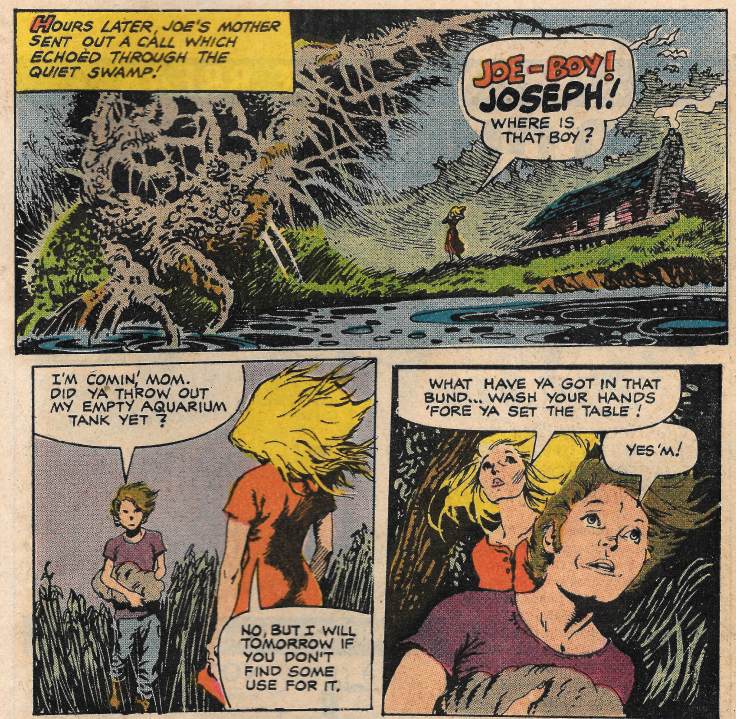 Whatever Joe has in that sack will have to wait as we go to the dinner table with his rough-to-the-point-of-abusive father. 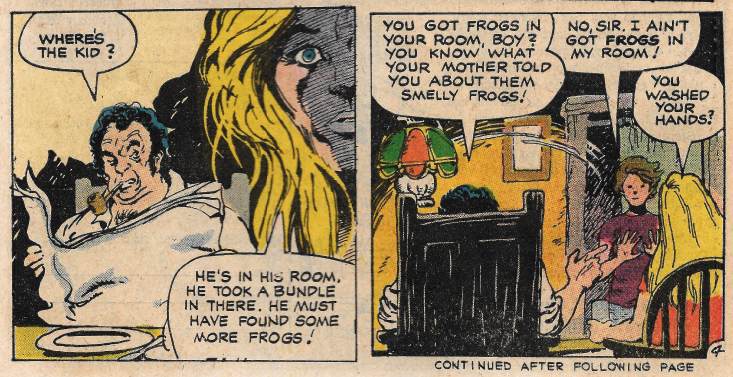 Joe eats dinner and heads to bed, not heeding the strange cries of the weird creatures he brought back from the wilds of the swamp.

His parents aren’t deep sleepers like the young lad is and they find that the thing in his room calling out into the night as if it wants something to come find it. The revulsion of finding them in Joe’s room is plain to see. 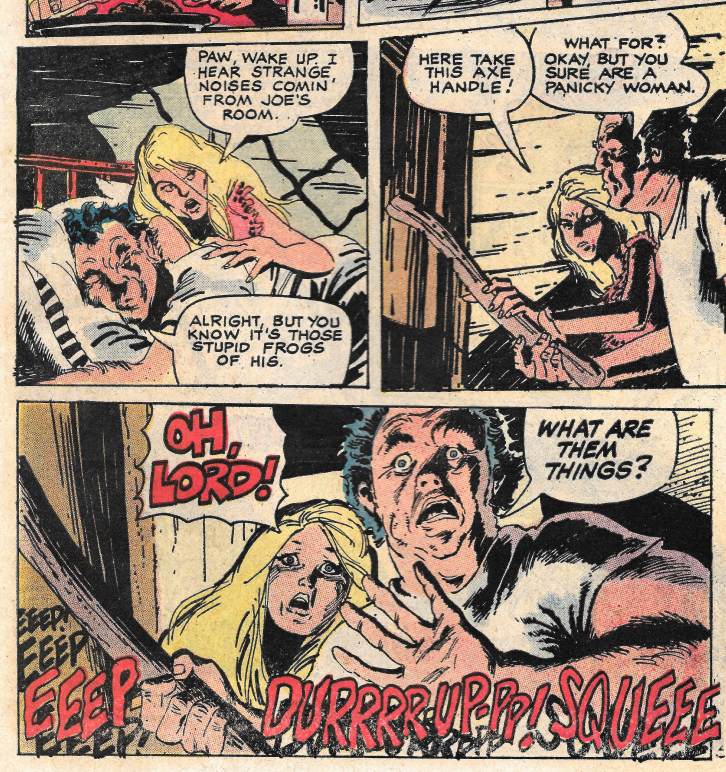 And whatever that thing is; be it slime, slog or glump, Joe’s Father has just one way of taking care of it. 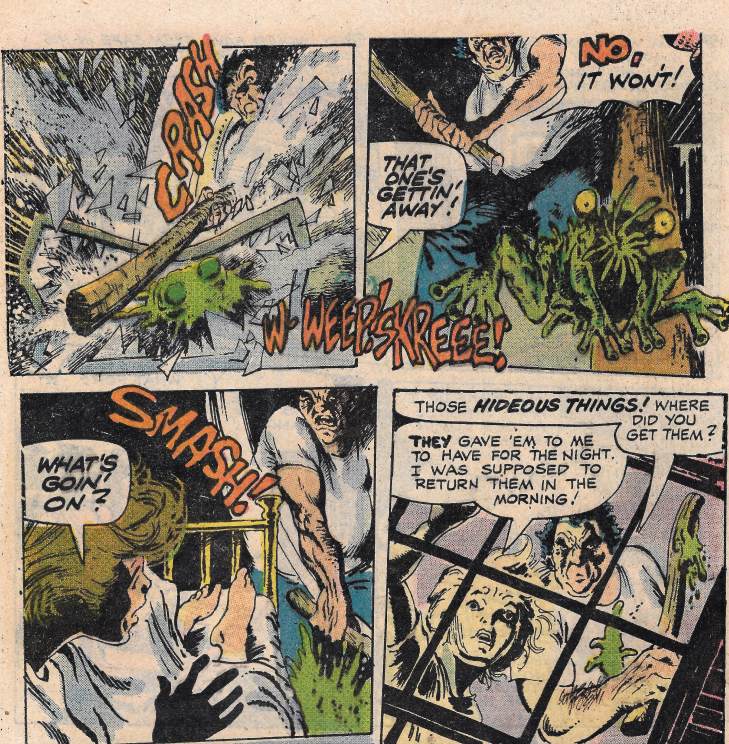 Which ends up being a VERY bad thing, because Cathy worked out a deal where Joe could have that little critter for the night…but needed to bring it back in the morning… 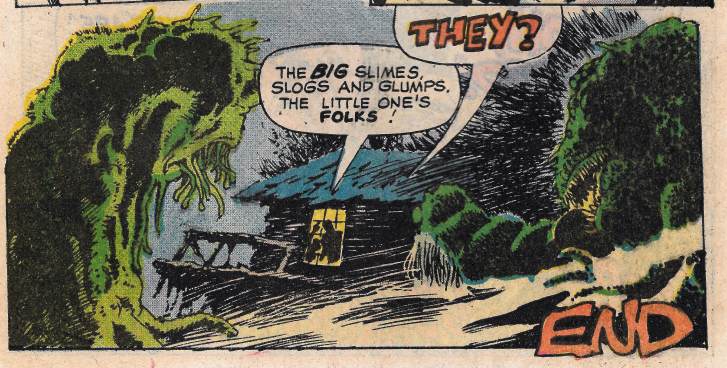 …to its much, much larger parents.

Having this as kid meant I re-read that last story many, many times and possibly overthought it as much as one could. Was Cathy a swamp spirit who could work deals with its strange creatures or was she just a simple child? Did she know Joe’s parents would do something to harm the little repulsive thing she sent home with him and expect him to face the wrath of the swamp “things”? What happened to her after we left the two children? Did Joe do anything to her or is she safe at her house for the evening? Did Joe or his family survive?

A lot of open ended questions and no ready answers. Those are the kinds of things that make the best horror stories. Because nothing is scarier than waking up your own imagination.

That’s it for Creepy Things. Until tomorrow, don’t take home any noxious-looking reptiles and I’ll see you in the morning.
Posted by SonOfCthulhu at 3:50 AM