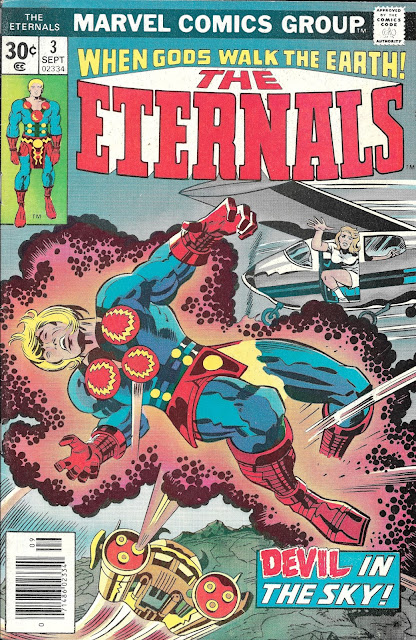 When Jack ran out of steam

In Jack’s career arc, The Eternals are some of his last original comic work and some of his weakest. Borrowing from the Chariots of the Gods subtext and themes he wasn’t allowed to complete while at DC, Kirby crafted a tale of immortals living among us on Earth. These “Eternals” served the will of uncommunicative and unfathomable spacegods, who showed up at various points in intelligent species development and watched them for years. At the end of this time, they would judge that species as to whether it would be allowed to continue its progress or be destroyed.

They were kind of a cosmic buzzkill.

The spacegods were called Celestials, and in a rip from 2001 (which Kirby was also playing around with at Marvel), they visited pre-humanity and helped things along. They also developed two off-shoot races, the Eternals and the Deviants. The Eternals were to be man’s protectors. The Deviants, meanwhile, rebelled and were cast down into a city under the sea. These repulsive little monsters hoped to eliminate both mankind and the Eternals so that the “Dreaming Celestial” will grant them the Earth.

There is a ton of nonsense in the Eternal lore and the book itself shows all the weaknesses of Kirby’s writing style. Sadly, by this time, it appears that no editor could rein him in, nor did any try. Having him in the Marvel stable was good PR and having him not create books for their competitor even better. One only has to look at the longevity of his Forth World villain Darkseid to realize that Kirby working at his best could produce characters that would last for generations.

Just that it seemed the Eternals, Devil Dinosaur and Moon Boy, and Machine Man, weren’t the best examples of those iconic characters, exactly.

And you get that coming from a Machine Man fan, as you’ll see later.

As for story, this issue is kind of lame. Very little conflict goes on, lots of exposition, and some sexism/misogyny occurs, which means I can’t rightly recommend this issue based on story content. It does contain a bunch of Kirby-tech art, groovy nonsensical Kirby cosmic character design, and the first appearance of an Eternal that would go on to become an Avenger. Sort of the first appearance, anyway. I’ll explain as we go.

But first we have Arishem, leader of the Fourth Host discussing what must happen now that the Celestials have sent one of their own to Earth with these three individuals. They are from left to right: Archaeologist Dr. Daniel Damian, his daughter Margo Damian, and Ikaris, using his illusion power to appear human. 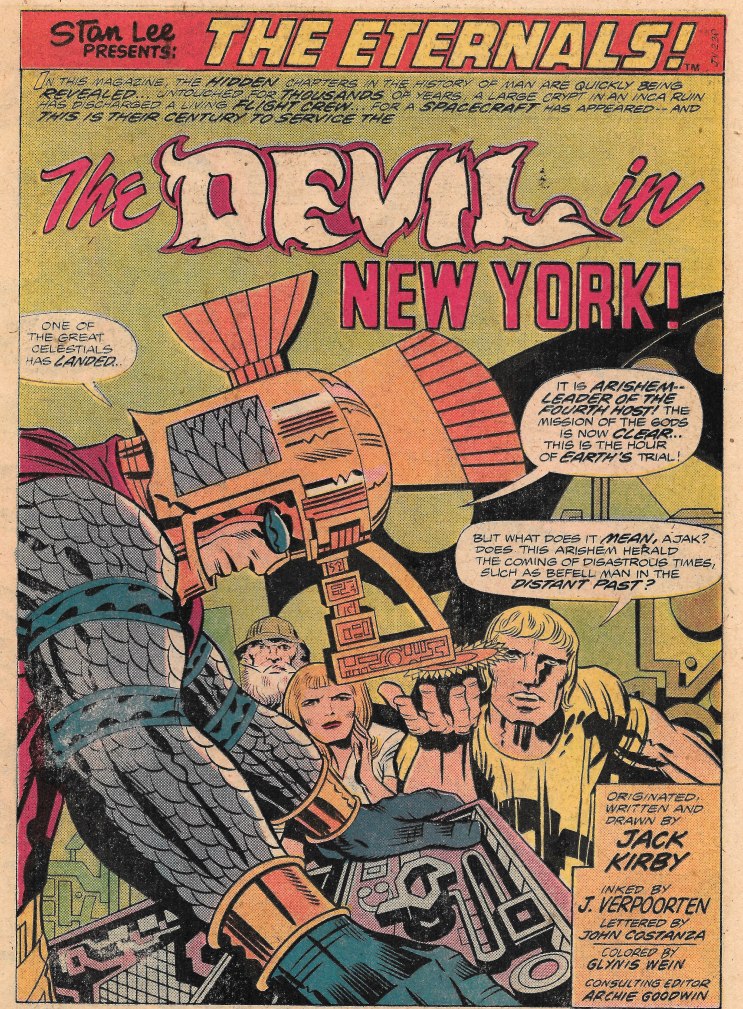 And to what do we owe their shocked expressions? Why a giant spacegod Celestial arriving on Earth done up in two-page splash, that’s what. 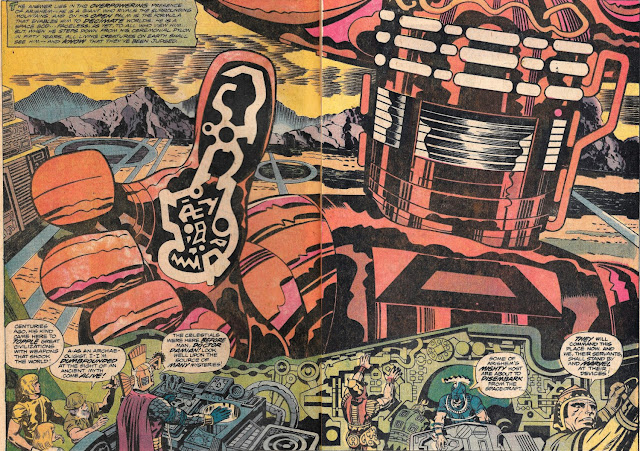 Fantastic! Note the similarity with the Kamandi #14 that happened into the Crapbox last? We go from a one-page lead-in to a two-page splash in an attempt to build wonder and amazement. I’ll admit that based on this opening, I had high hopes for this, even with the expository outburst from Dr. Damian about being an “archaeologist” and the tech to the far right explaining what will happen to no one in particular.

Just look at that spacegod though. I love the bucket head look that Kirby would throw on his better machine and space entities. Galactus, the Destroyer, and all the Celestials have that “I’m so cool, I can pull of wearing a pail for a helmet” thing going on. I’m totally down with it. You go, Kirby! Put buckets on the heads of everyone!

Sadly, here is where we get into the much less interesting and much less understandable human-Eternal dialogue and actions. Dialogue was always Jack’s weakness. He could draw and he could plot, but when it came to writing human interactions that seemed believable... 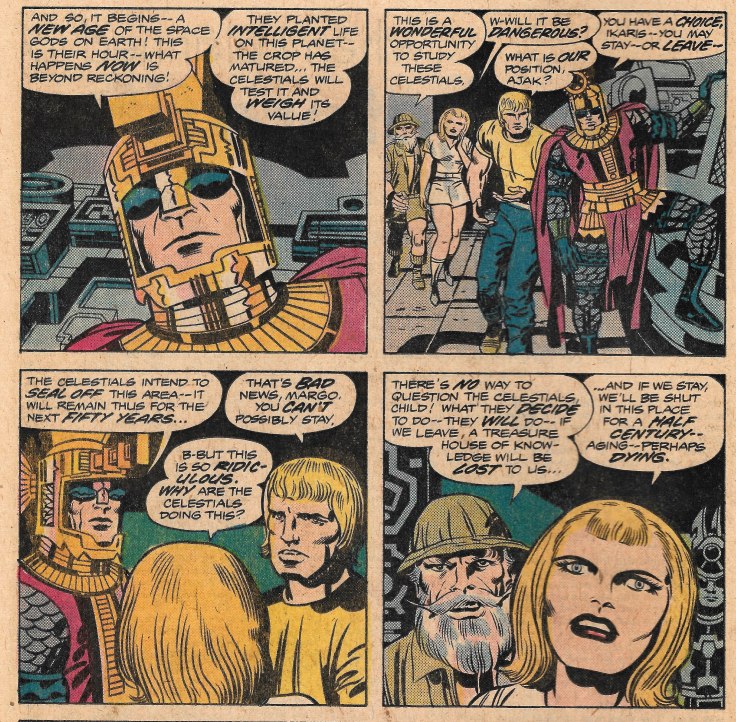 Jack’s characters are a bit “wooden” and prone to explaining things to the audience. What Lee would pull off with a bit more style, Jack has moments where you KNOW you are reading a serialized story by the very nature of the exposition and soap-operatics of the characters.

It doesn’t help matters that many times the characters will be saying these things while Jack has positioned them to look directly into the camera, as Margo does here. These awkwardly worded bits of dialogue can take you out of the story, even if just for a bit. That lessens the impact for all involved. It is this piece more than any other that made me treasure the Lee-Kirby tales. Sure the story might have been more Kirby’s than Lee’s in some/many cases, but the polish to the dialogue definitely added something. In the end I value the work they jointly produced no matter who did the lion’s share of the work and credit them both with equal rights to that praise.

So, anyway, the Celestials are about to wall off the hidden valley for a period of fifty years while they pass judgement on humanity. Anyone who stays in the valley will be locked in for fifty years, but will have a view of the Celestials as they weigh the fate of mankind. And the crew has only moments to decide whether or not to leave. Dr. Damian has decided to stay. 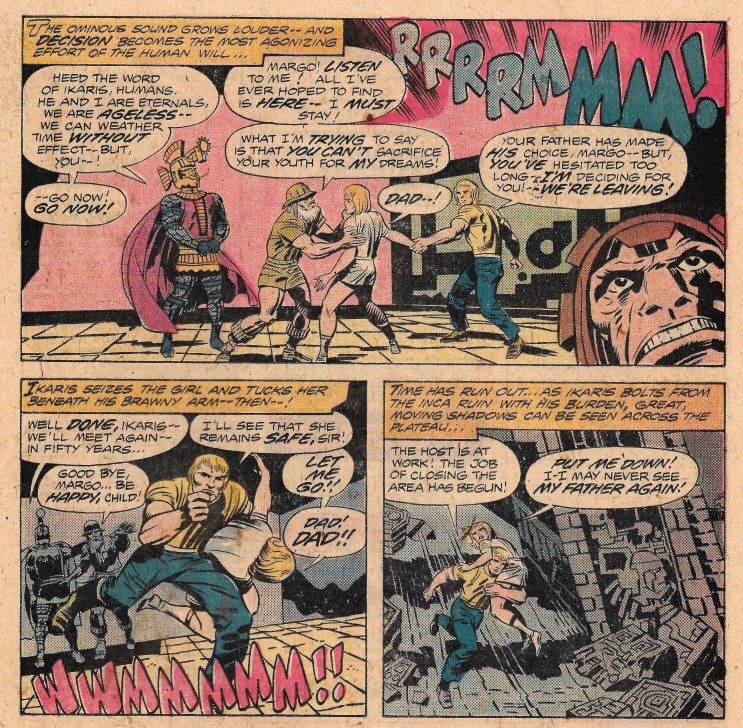 When Margo hesitates, Ikaris does what any red-bloodied male would do back in the 1970’s: Throw that broad over his shoulder like a sack of potatoes and make the decision for her. 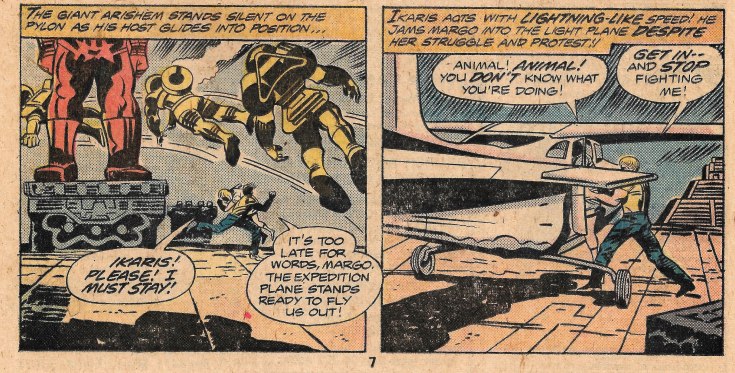 Margo seems like she wants to stay though, but Asshole-karis isn’t allowing her the freedom to make that choice. 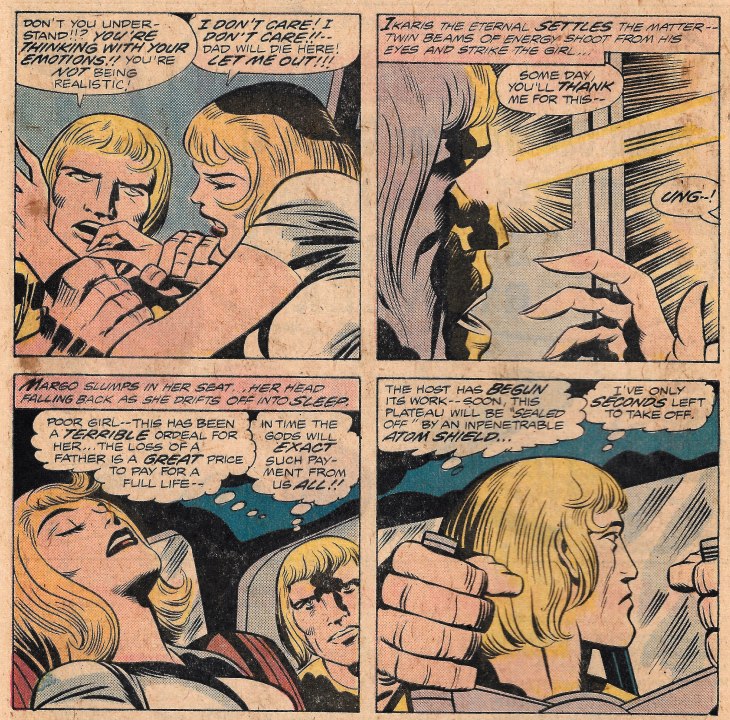 Is that assault? I’m pretty sure that’s assault.

Ikaris gives the area one last look over as he pilots the single engine plane away. 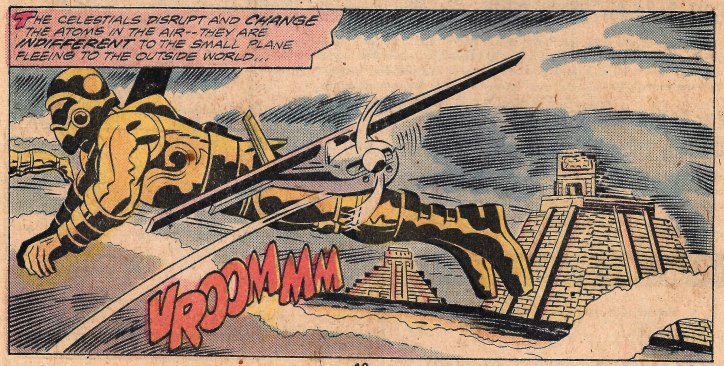 As for my favorite Deviant (and yes, I hear how that sounds), why he’s all trussed up at the moment. Living up to his name, as it were. Everybody, meet Kro. Kro was the main bad guy behind the 1980’s revival of The Eternals that I picked up when I was in college and his character came off as master manipulator there. Sort of a bald Cersei Lannister. 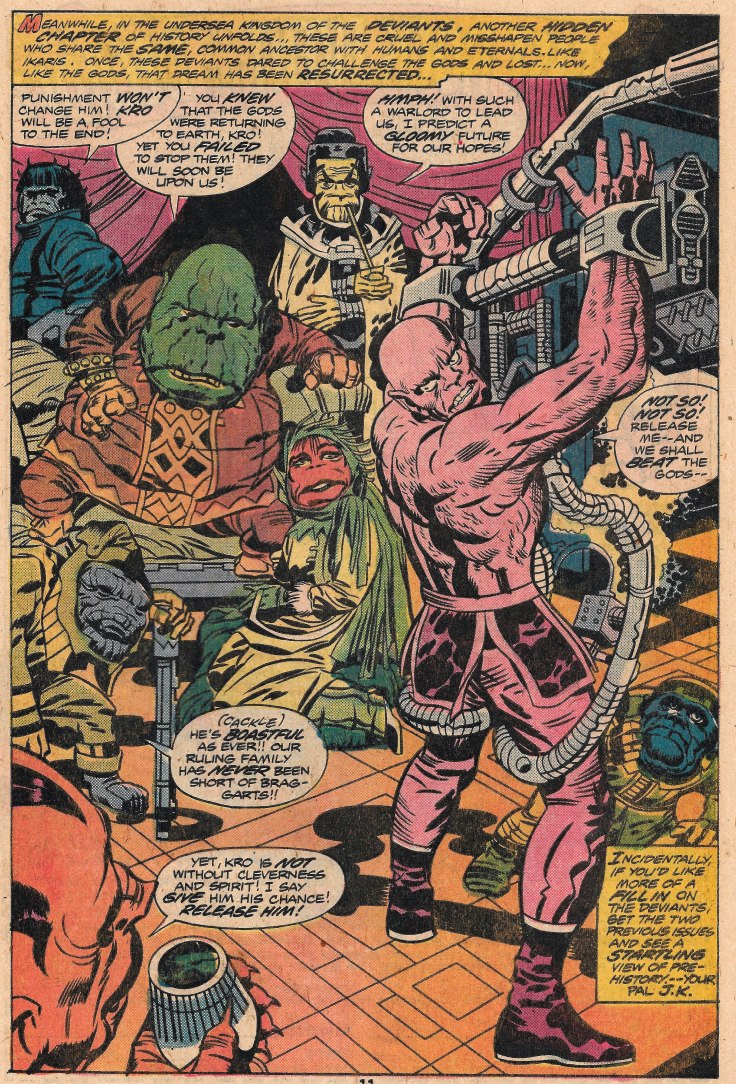 Bumping into him here isn’t a surprise, nor is it really a surprise to find him being disciplined by Toad, the current ruler of the Deviants. Kro is always someone who has to be plotting against the Eternals while also fighting his way up the power structure within Deviant society. It makes for good drama that way.

Whatever Kro’s done, Toad feels he has extracted his pound of flesh and releases the schemer. 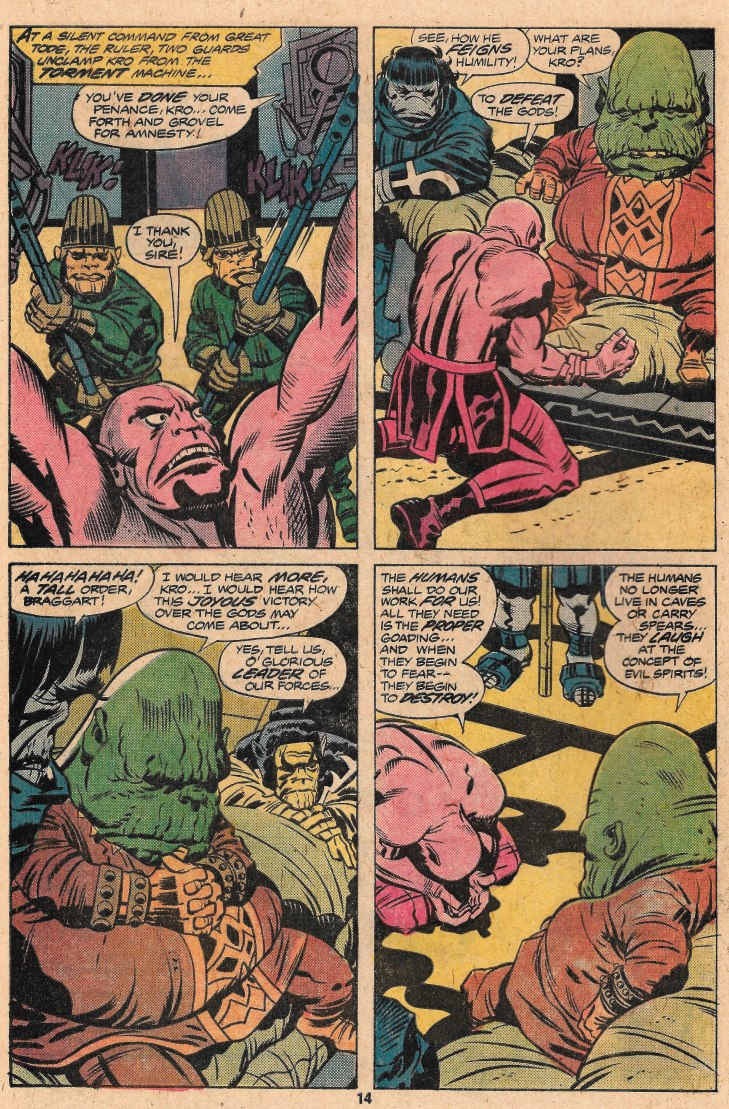 I love all the panels with the Deviants. Kirby really gets to let loose on character design. In fact, I’d go so far as to state that the book really hinges not on the heroes but on the depictions of the Celestial-tech and the Deviants themselves. They are rendered with more care than anything else here, almost to the point of making the other sequences boring.

Anyway, back to the story. Kro begs to be allowed to take on the Eternals once more. His plan? To scare the humans into attacking the Eternals by showing up looking like the Devil. Not sure that should work, but okay…let’s just go with it. 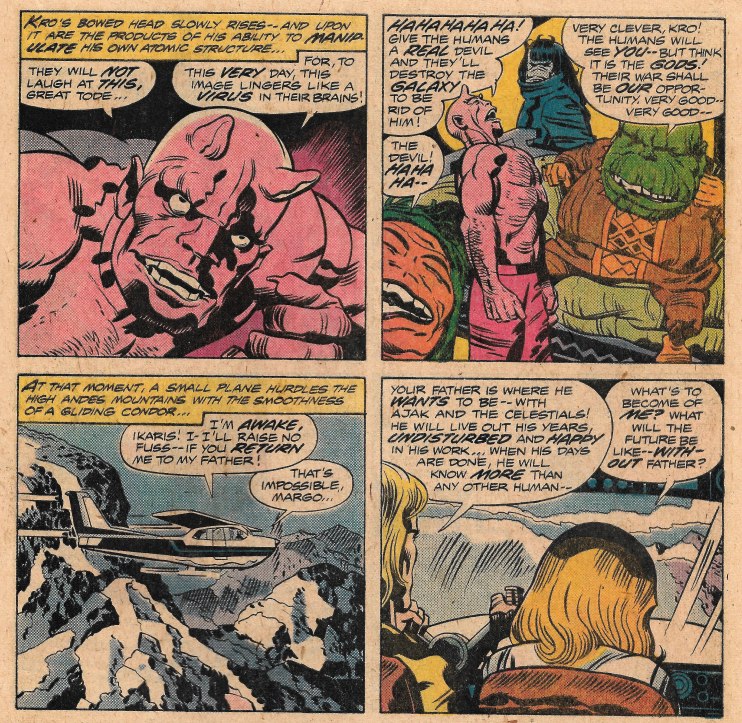 Meanwhile, Margo has awoken and she is distraught because she will never see her father again. Way to go, Ikaris. 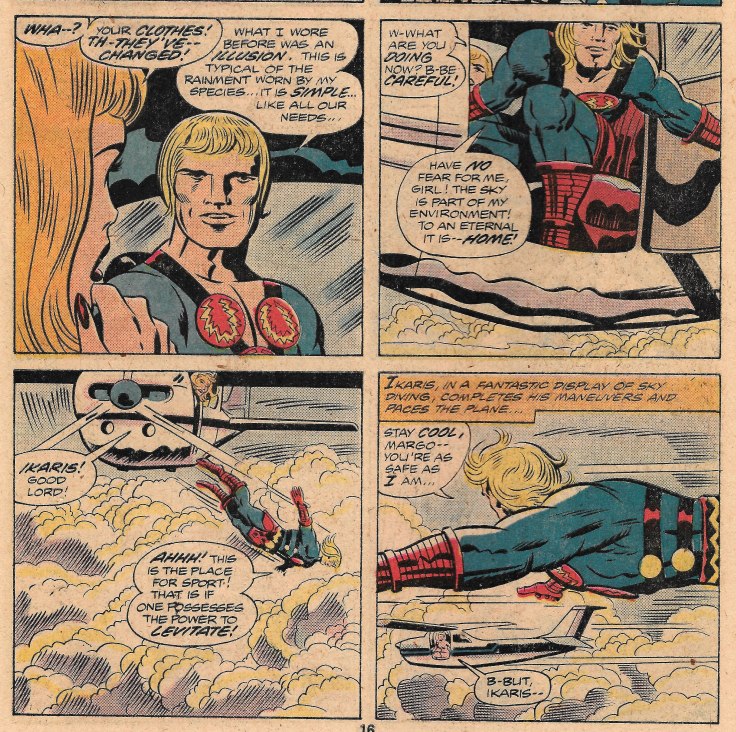 …but is apparently still controlling it through is levitating power. Or something. Kirby makes the Eternals almost too powerful when he does stuff like this, which lessens the feeling of danger when they are attacked. 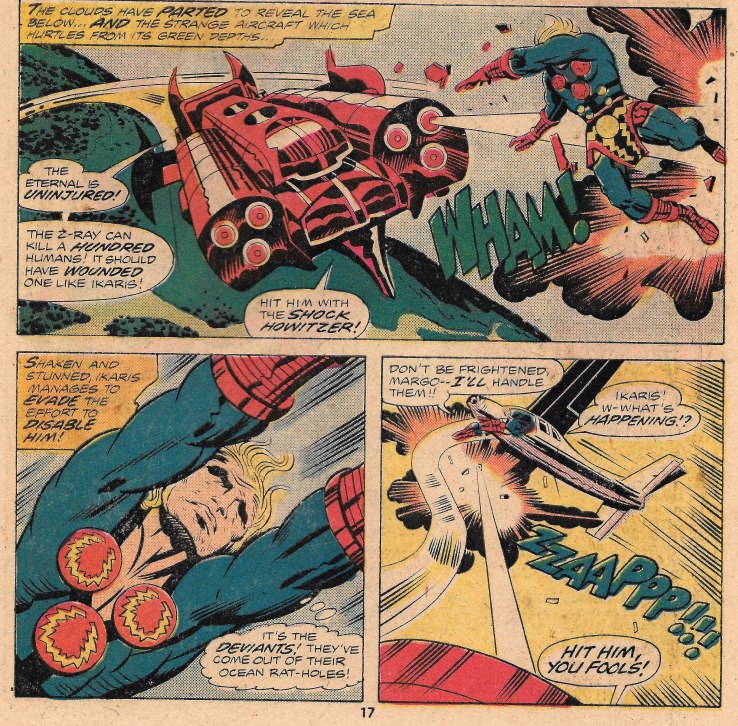 And speaking of being attacked, Kro and his Deviant hordes arrive at just that moment and attempt to shoot Ikaris out of the sky. Ikaris dives back into the prop plane in a series of panels that make it look like the plane has been damaged.

It hasn’t though. And before the Deviants can blast them out of the sky… 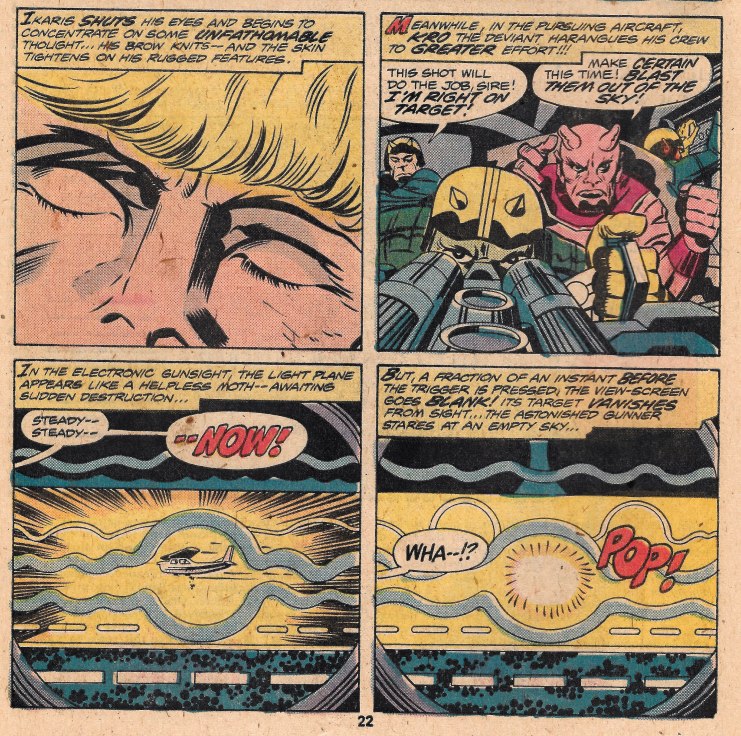 …Ikaris uses his illusion power to cloak the plane’s very existence from the Deviant sensors.

Kro has little choice then but to continue on his mission, abandoning hope of killing Ikaris. However, by firing on the Eternal he has unknowingly called attention to himself and his mission. Ikaris now follows the Deviant as they head for New York. 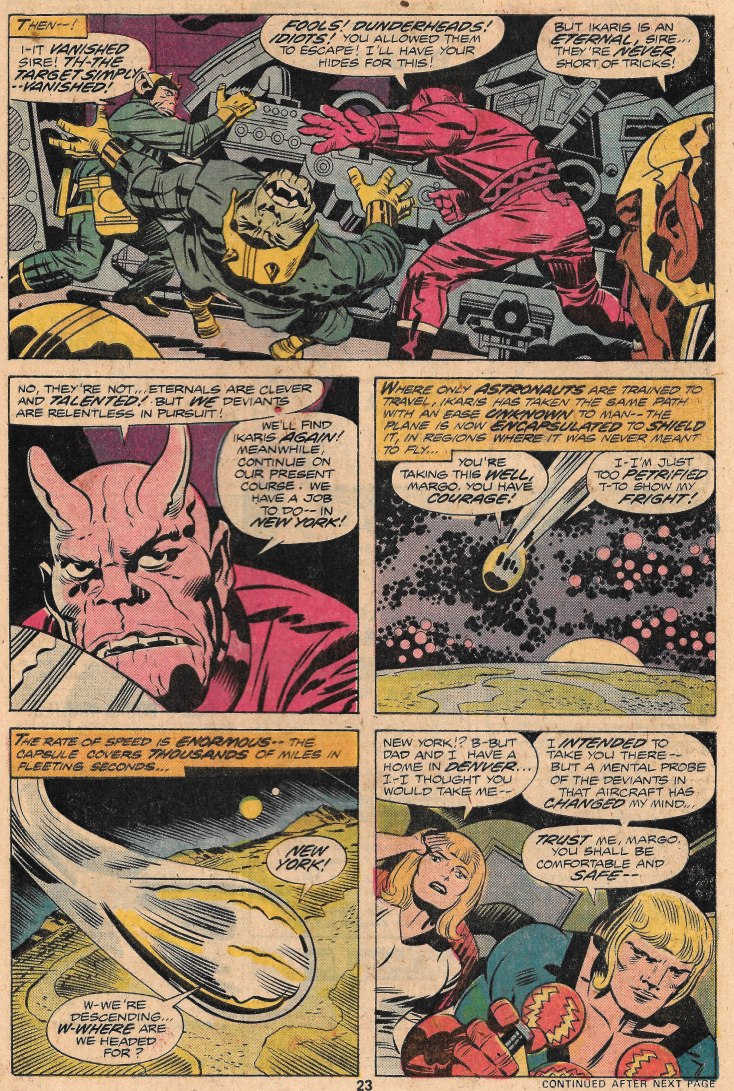 Once there, Ikaris deposits Margo in the apartment of an old friend and fellow Eternal. 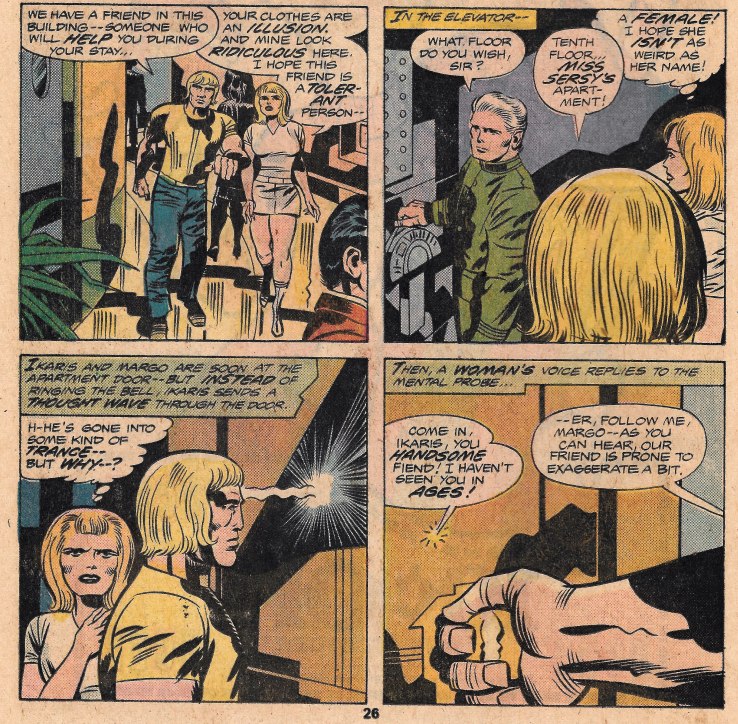 A woman who I’m VERY familiar with and at the same time not. 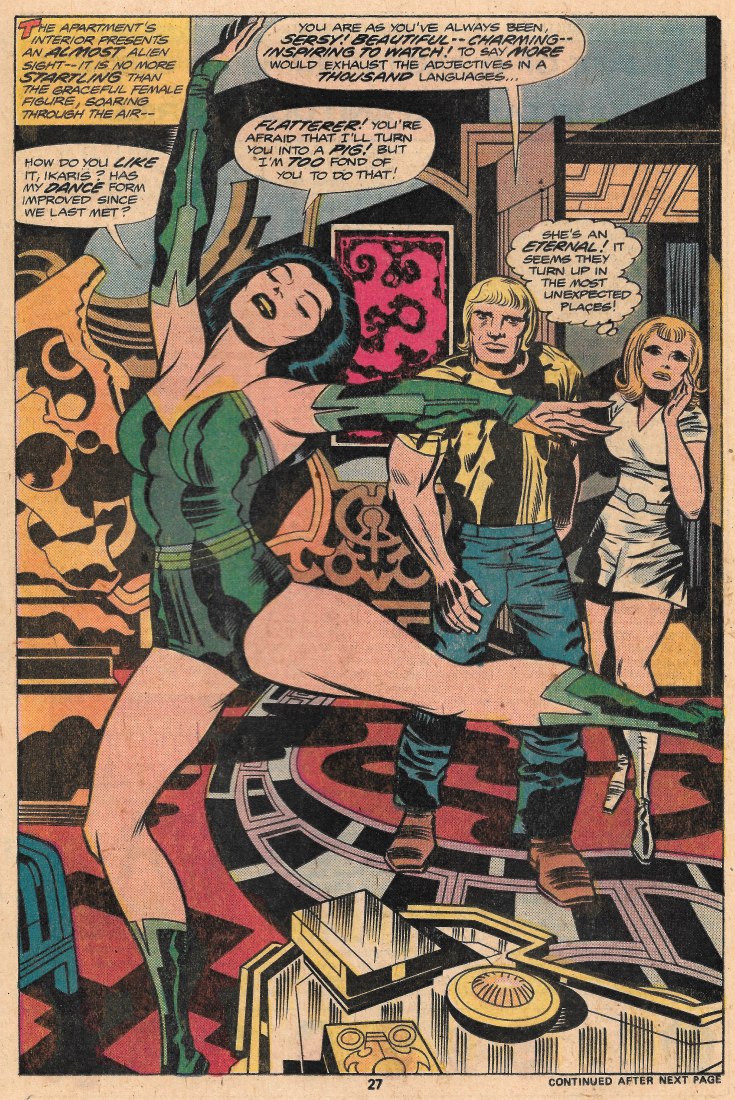 Yes! This is the first appearance of Sersi, who would end up joining the Avengers for a short time during the late 80’s. All this would occur after the Eternals series was cancelled before Kirby could wrap up this saga of the spacegods and it had to be finished by making it part of a Thor storyline, thus bringing the Eternals into the Marvel 616 universe proper. As the story stands here, there is no mention of any Marvel heroes and this wasn’t in continuity.

But that’s not the way her name is spelled. I mean, it is for this issue but afterwards someone changed it from “y” to “i”.

Also I’m kind of stunned that the Crapbox spit out the first appearance of ANY character. Aside from Ravage 2099, that is. 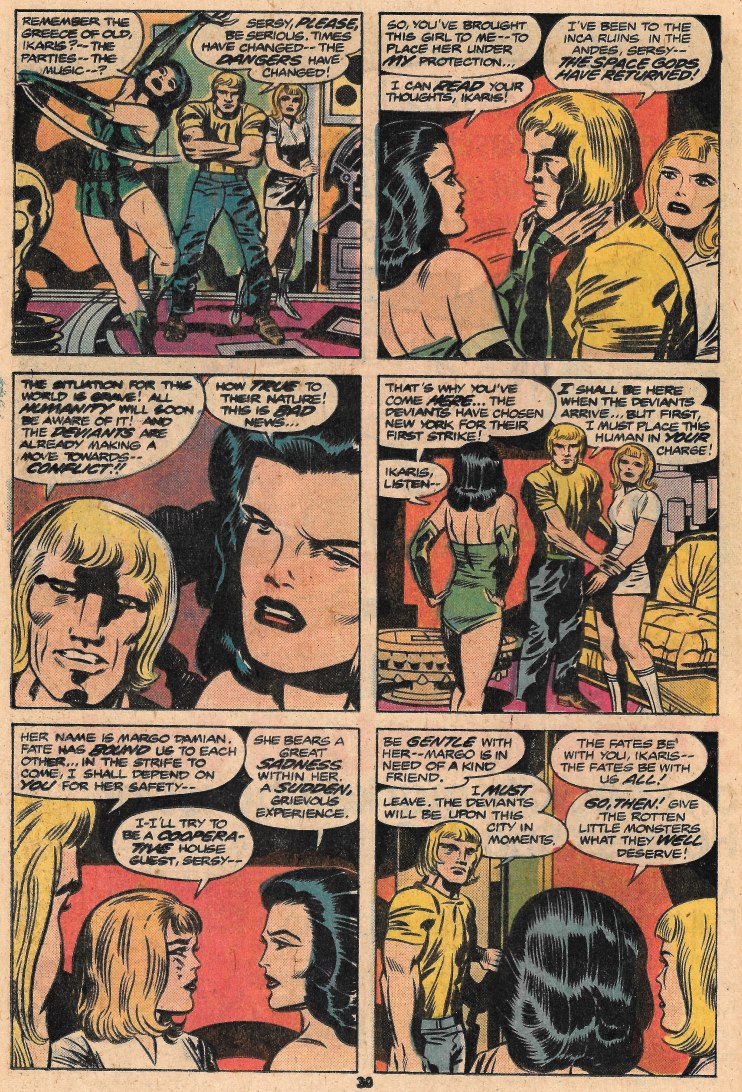 Sersi…er, *ahem*…SERSY’s hard partying personality doesn’t show in these seven panels, and that’s all we get of her as Ikaris drops Margo and runs off to fight Kro, who even now is wreaking havoc in the streets. 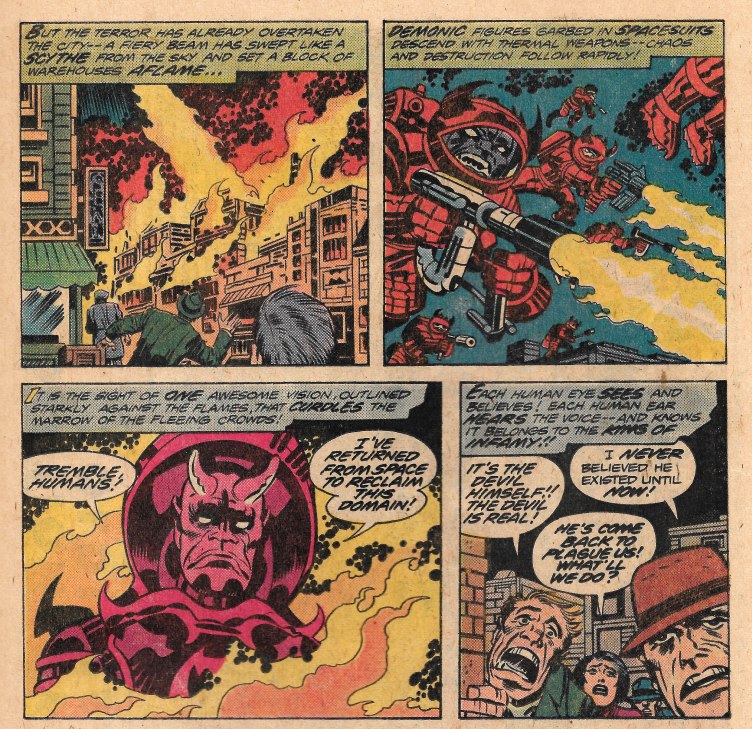 And that’s where the issue ends. Right there.

I suppose that’s a cliffhanger toward the end but there is definitely a feeling that this issue didn’t get planned out very well. The story meanders around before concluding on this bit instead of building toward it. If anything, Kirby’s stories needed a good editor, someone seasoned enough to tighten the arcs up so they maintained the audiences’ undivided attention. But all too often Kirby has the reins and was allowed to tell these stories his way.

It isn’t to say they are bad stories, just that they tend to be a bit wordy and don’t get to the point soon enough. The stories don’t arc well and include questionable scenes that an editor might cut. Take the pages of Ikaris and Margo flying in the plane. Not much character development happens there. Sure, we learn a bit more about Ikaris’ power, but it comes at the expense of two pages of panels. And they are kind of boring panels.

This was something that McFarlane did in his version of Spider-Man, too. Given the freedom to draw anything he wanted, for parts of the book he would draw things that did little to advance the plot, build good character moments or properly address pacing issues. And he did it because he wanted to draw those pages a certain way. He let the art dictate the story, which typically ends up causing the story to suffer a bit. Kirby’s sin in this is MUCH less, but is still apparent when you reach the last page and feel that the conflicts presented in the book are resolved too quickly or have their emotional impact severely muted.

Still there is a bunch of things here to love. Kirby’s pencils are always amazing and as I pointed out about the Deviants and Celestials, he’s drawing things that are fun to spend minutes drooling over. The book just needs to fix its pacing problems.
Posted by SonOfCthulhu at 3:33 AM