Brave and the Bold: Batman and the Guardians of the Universe #173 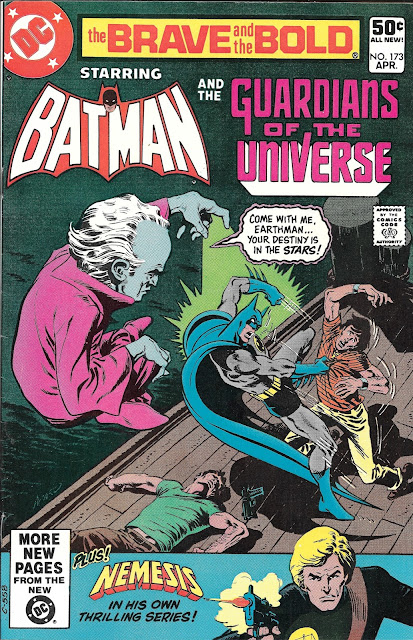 Here’s something you don’t see everyday

I always enjoyed the superhero team-up books. I recall bunches of love for the Brave and the Bold title. Without this humble little title, we wouldn’t have the Justice League today.

What began as an anthology-adventure book in 1955, The Brave and The Bold series didn’t really look like the Batman team-up book I would recall from my youth until four years later. Issue number 50 saw it become a team up book and issue number 59 turned it into a Batman specific team up book.

Prior to that, the title had hosted Strange Sports stories, birthed the Justice League and the original version of the Suicide Squad and featured adventure tales starring the Silent Knight (holy knight? All is calm, all is bright?), the Viking Prince, the Golden Gladiator and Robin Hood. Sounds like it was a hard working book.

It was the first book to feature Neal Adam’s version of Batman, leading to Adam’s defining a Batman style that would last for a generation of readers. I missed that era by just a bit, coming to the title right around here: 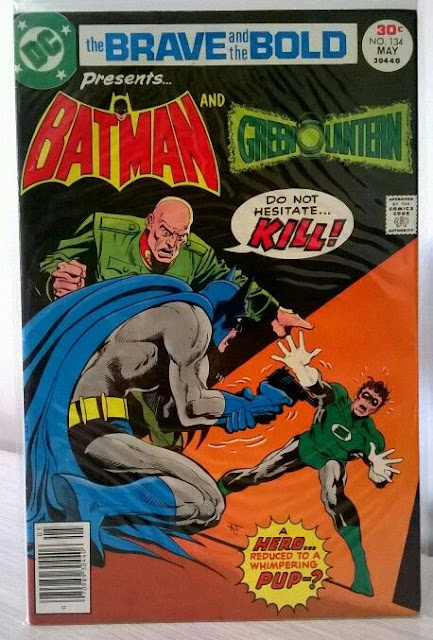 That was my first B&B book and I loved it. Green Lantern and Batman acting like spies to challenge a set of communist mind control conditioning experiments. It was heady with GL giving up his ring and defecting, Batman going in to rescue (or terminate) him, Bats getting caught, drugged and dropped into an isolation tank to break him. This was the book where I first heard the name “Joe Chill” and it was the first book that made me look at heroes as people. I loved it and read it to pieces. Literally, as I don’t have the issue anymore.

So when perusing Half-Price books and I came across this issue featuring Hal’s bosses, the pint-sized powerhouses known as the Guardians of the Universe, I had no choice but to snatch it up. The art here is Aparo and the story is Conway, which means you can snuggle in for a good tale. The only bad part is that this is a two-parter and sadly the Crapbox only has part one.

But what a part one it is. We begin with a silent introduction as one of our Oans appears on Earth and clothes himself like a native. 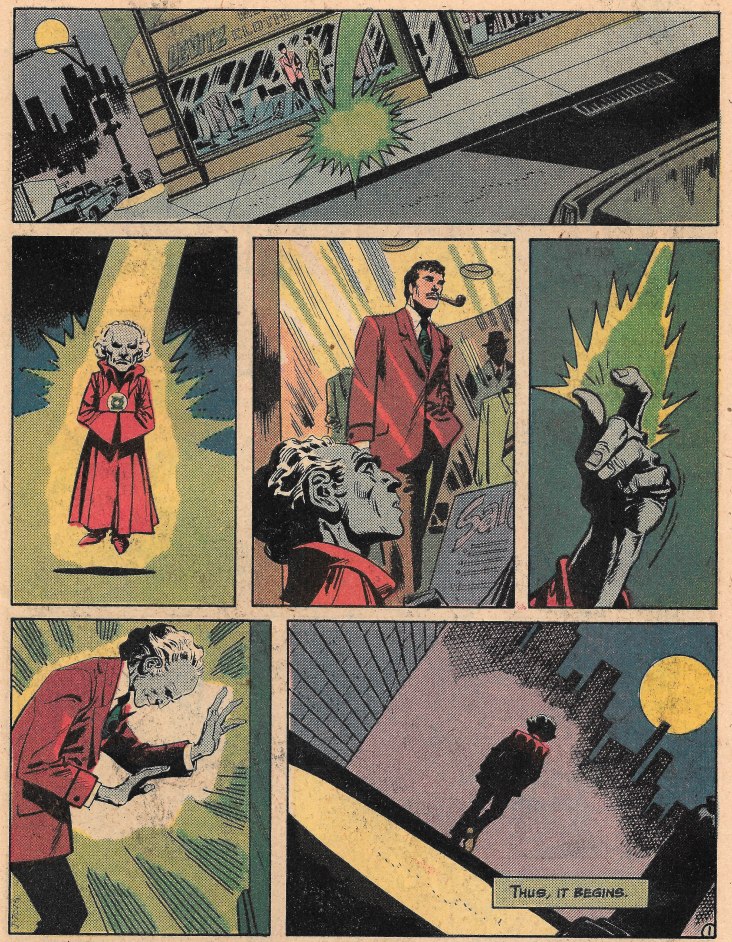 With unerring purpose, our little blue alien in Mens’ Warehouse knock-offs heads straight for the Wayne foundation (love him shading his eyes to look through the glass) where… 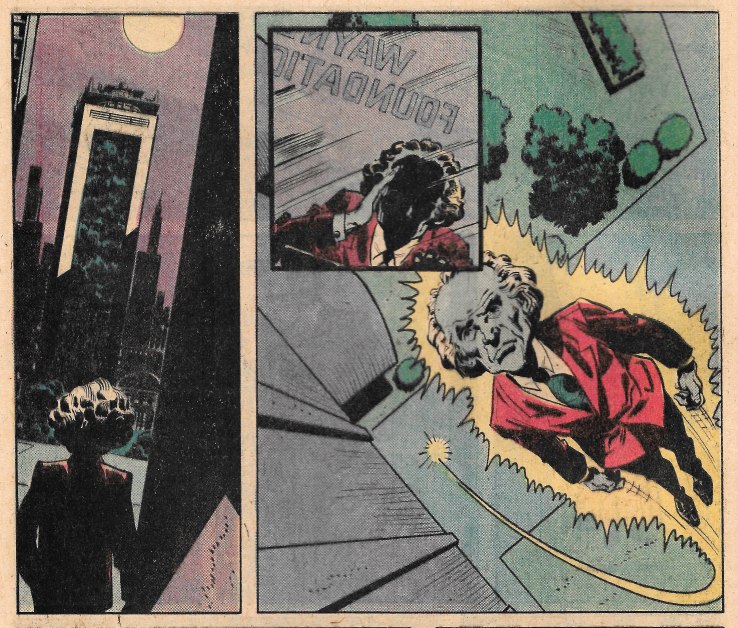 …he catches Bruce as he leaves for his nightly business as Batman. He introduces his presence with this ominous statement. 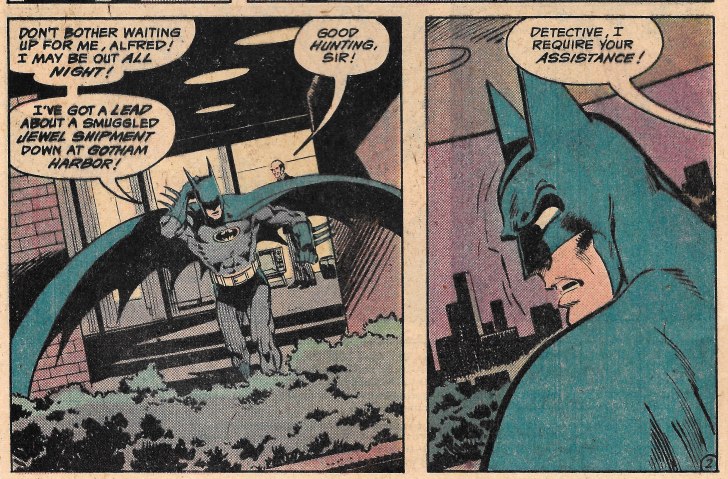 Appears the Guardians of the Universe, those wise little Oans who just love primary color-based powers, have an imposter in their ranks. This sounds VERY interesting and we have guys with the chops at the helm. Hang on kids, the ride is about to get interesting. 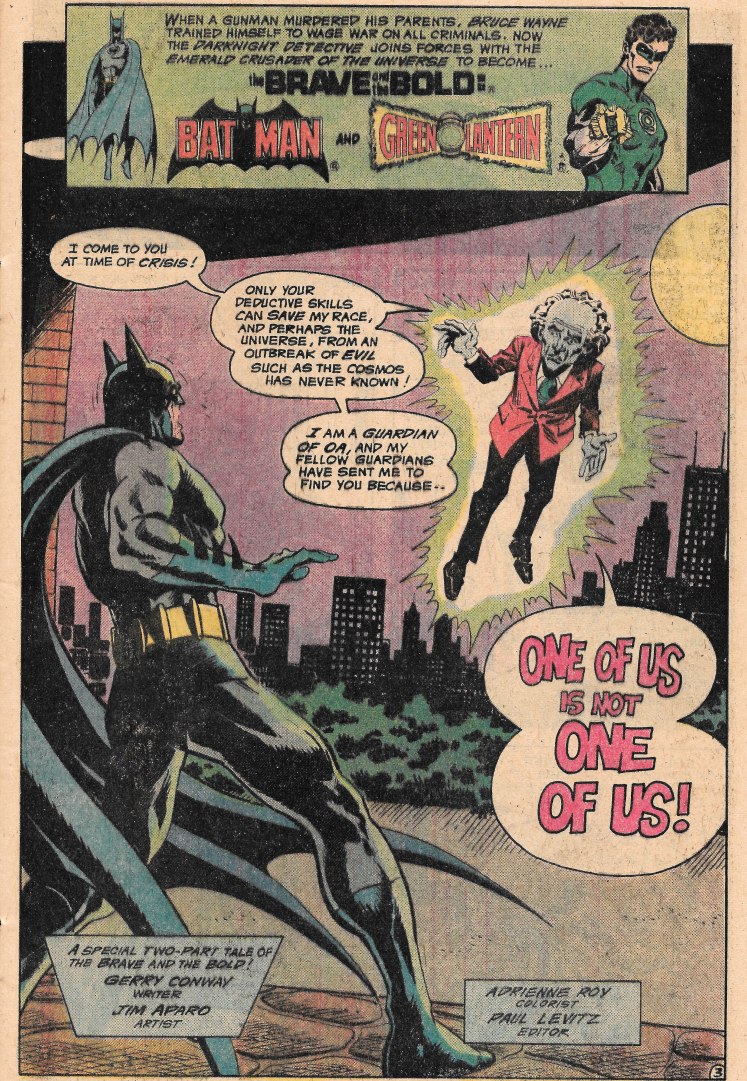 Being the world’s greatest detective, Batman takes the well-dressed bobble-head in and they converse at length about the case. Batman asks how he can be sure there is an imposter in their group. Which leads down this rabbit-trail. 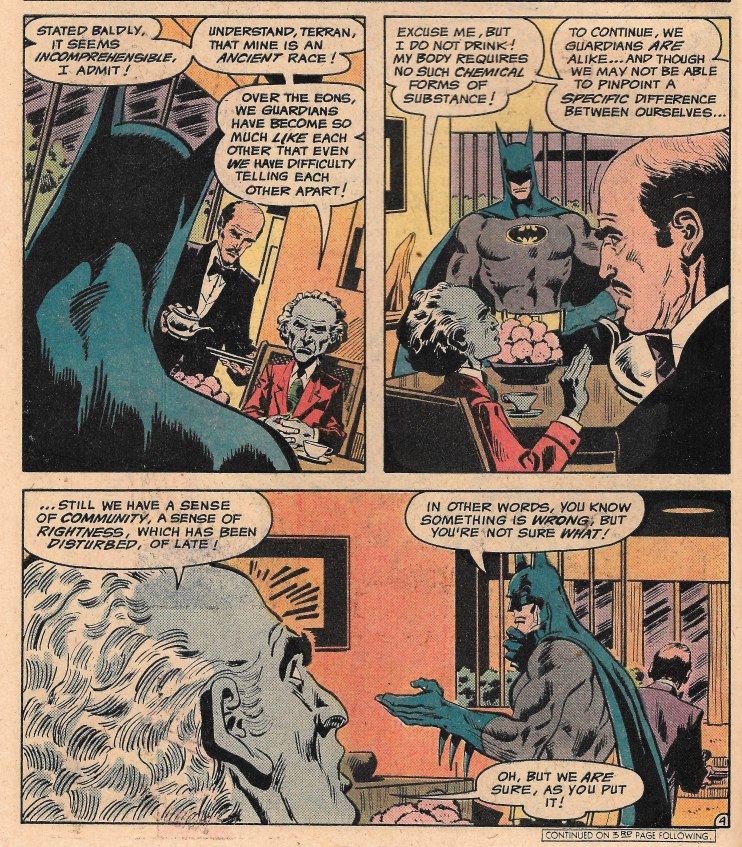 So next, Batman asks why him and not some of the Guardian’s hundreds of Green Lanterns? I mean, they may not be detectives, but they are amazingly effective at doing odd jobs like this. 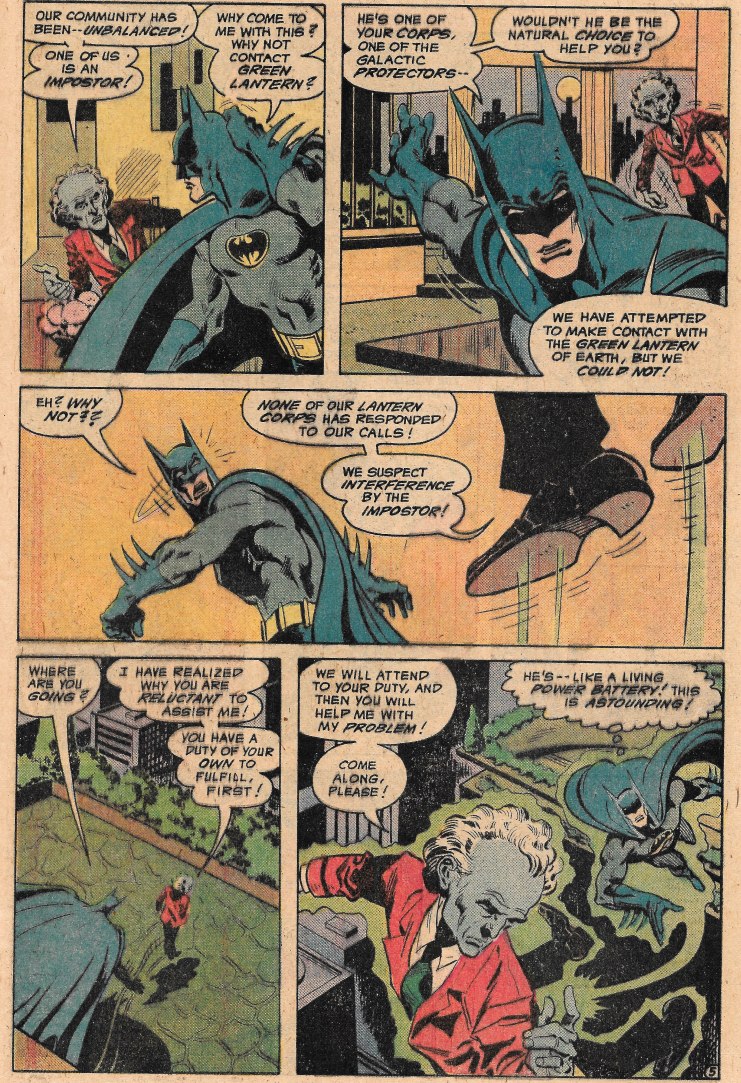 And with that, Batman finds himself drug along much like a child’s pull toy on the end of string. Our team-up looks to be getting off to a very strange start. And that start has Batman directing the Guardian to a ship in the middle of the bay. 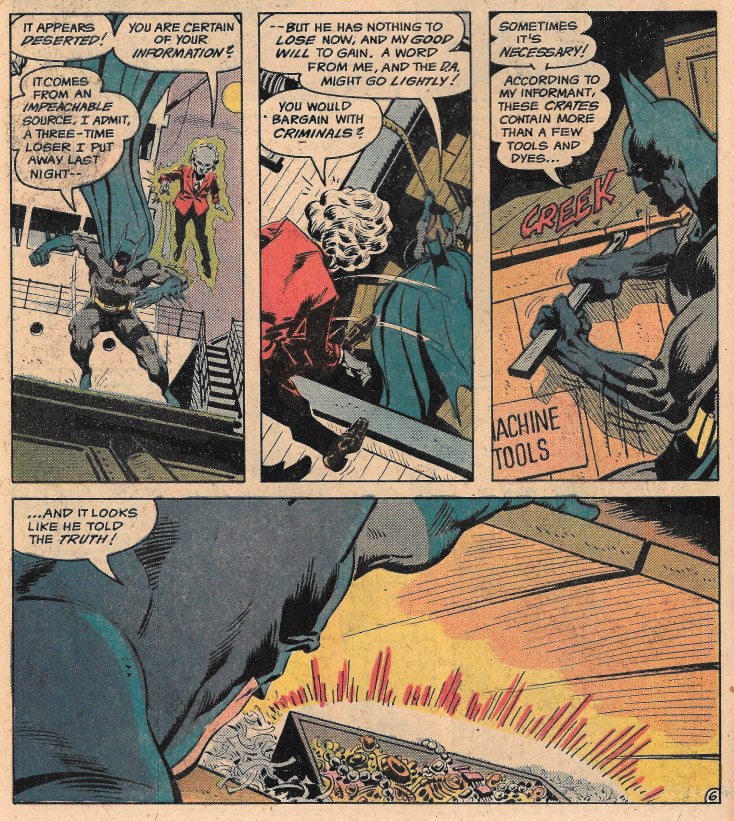 As the pair go about uncovering evidence of criminal activities, Batman explains how he came across the information that lead them here: an informant who was also a criminal ratted them out to Batman for a bit of leniency with his prosecution. This suggestion appears to be a novel one to the Guardian, in that they tend to administer justice with no favoritism for assistance granted.

It’s right about this point that I thought I nailed down the narrative arc this story was going for and I mourned the fact I didn’t have part two even more to see if I was proven right. My suspicion was that this first part of the tale would be the Guardian being a straight man to Batman while picking up tactics he used on Earth to fight crime. Then in our second half of the story, the Guardian would be given opportunities to use those very same tactics to expose the imposter Oan. Such as striking a deal with a criminal perhaps being one of those tactics. This seemed like a fun story structure beyond just the oddball comedy of the pairing of the two of them that I am frustrated I don’t get to find out.

Anyway, back to the present. No one challenged the duo and you’d suspect a criminal or two to be lurking about with that much loot around… 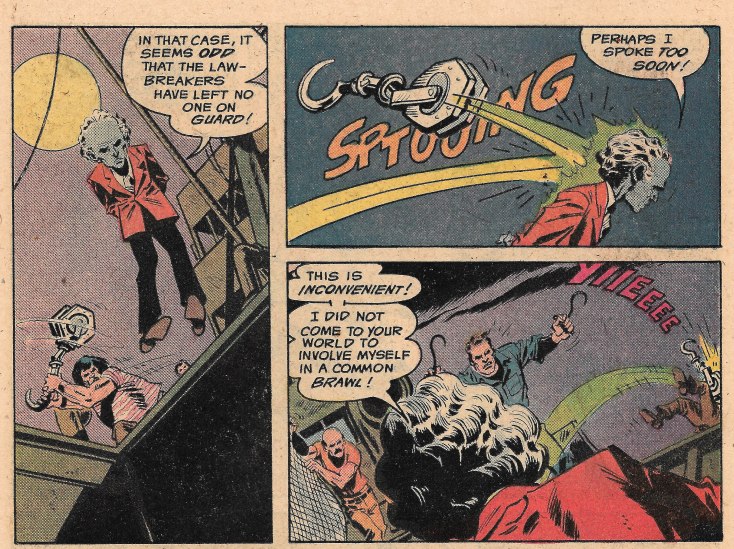 Okay, have to officially love that…that criminal taken out by his thrown shipping hook. I suspect this will be a short-lived scuffle. 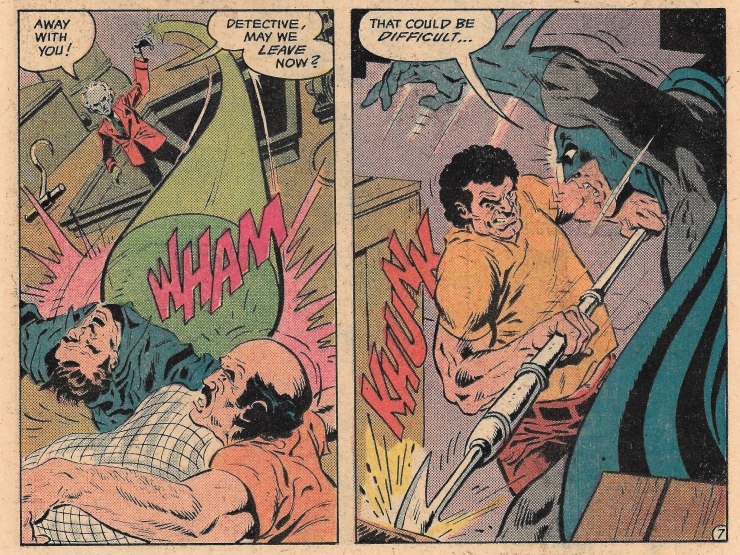 And while it might be for the Guardian, Batman is having his own difficulties. 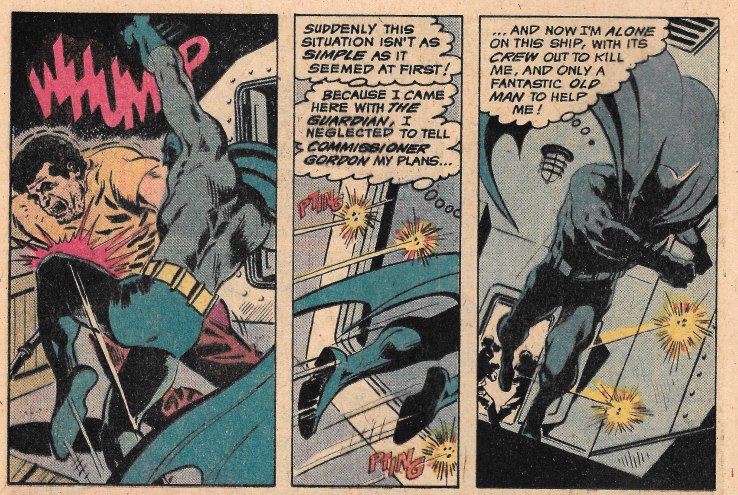 And those difficulties are wielding pistols while driving Batman further into the bowels of the ship. 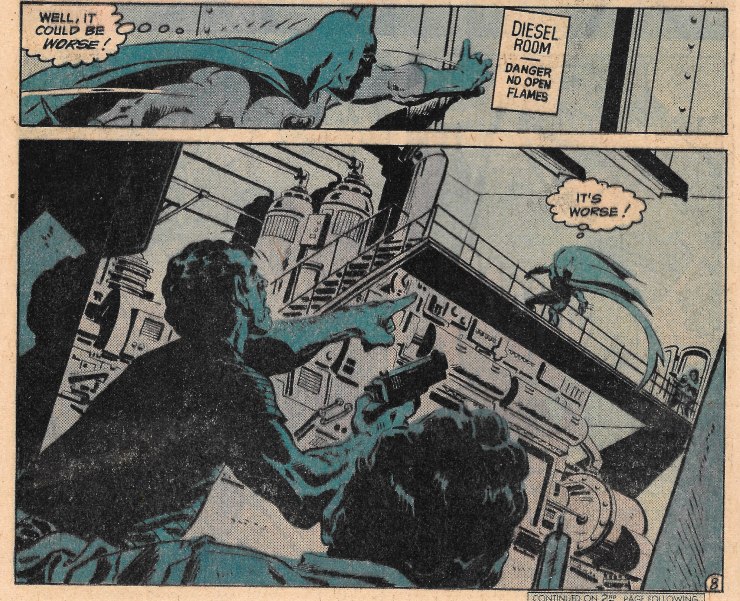 Until we have Batman cornered in the Engine room and spouting one-liners like he’s in a buddy cop movie from the 80’s. So far though I dig the book’s vibe. It is offbeat and strange but they have me intrigued. And they constantly surprise me, like when the bullets set the ship aflame. 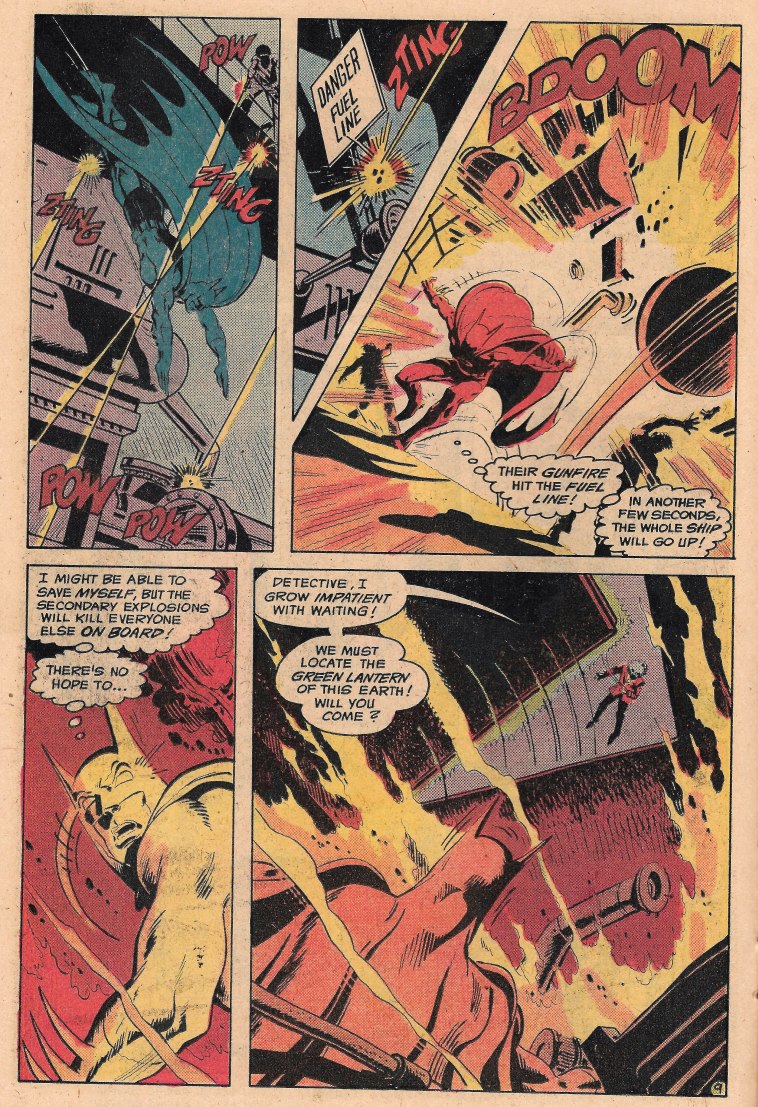 The fire is child’s play for a Guardian, however, and soon enough they have the criminals incarcerated. Look at Jim Gordon scratching his head at the image of Batman dangling beneath the floating blue Guardian. 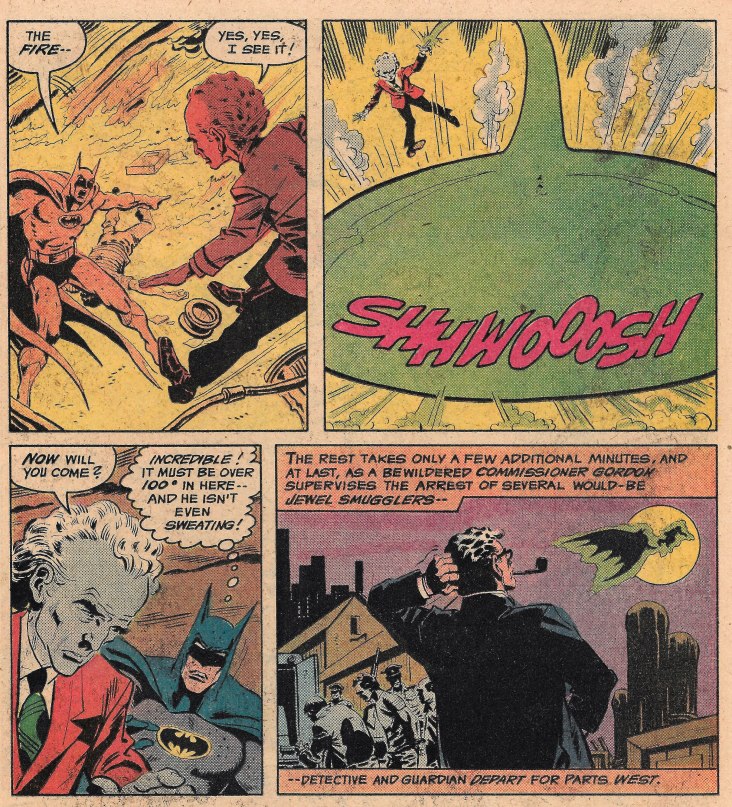 It’s here that the duo head to Ferris Aircraft to pick up Hal Jordon, also known as Green Lantern. After the Guardian almost causes Hal to crash, upsetting Batman, they approach his grounded plane. The Guardian explains that he put Hal in no real danger as his ring would have protected him. Carol Ferris and Tom Kalmaku are on hand as Hal goes off on the pair. 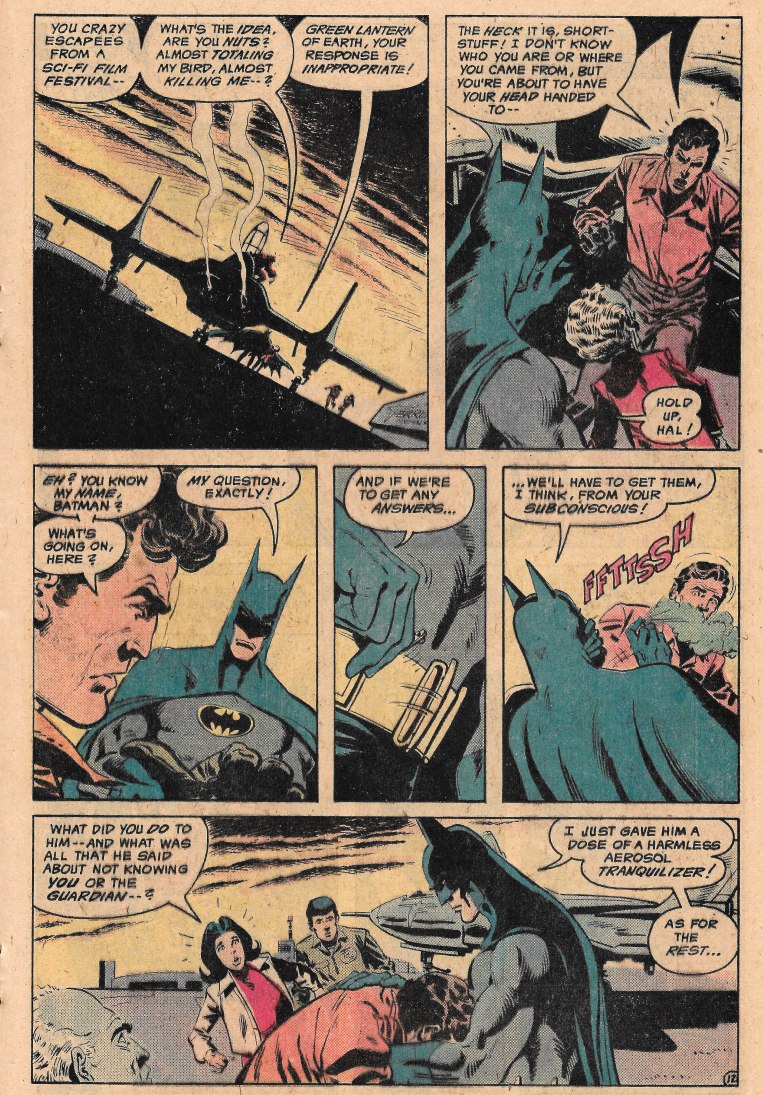 But the odder issue is that Hal has no idea that he is Green Lantern. So Batman does his Batman thing and knocks him out faster than Bill Cosby offering a drink to woman half his age.
They take Hal to a back office at Ferris and attempt to use “Bat-hypnosis on him… 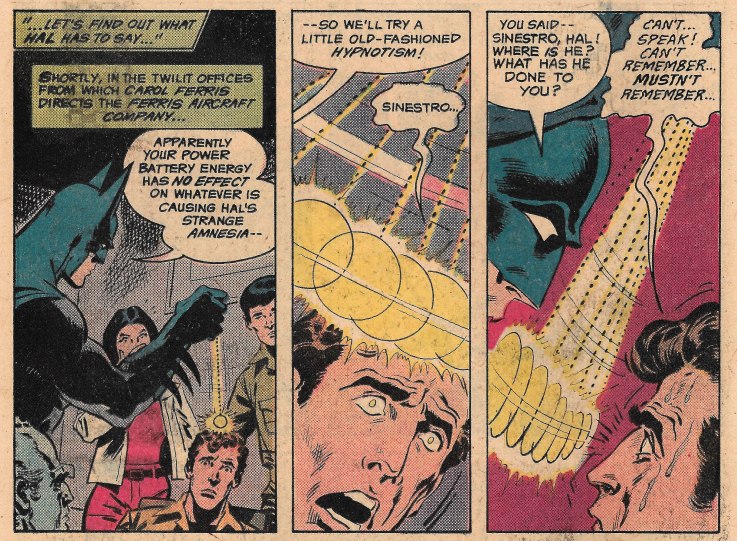 …and when that doesn’t work, they force Hal to charge his ring. 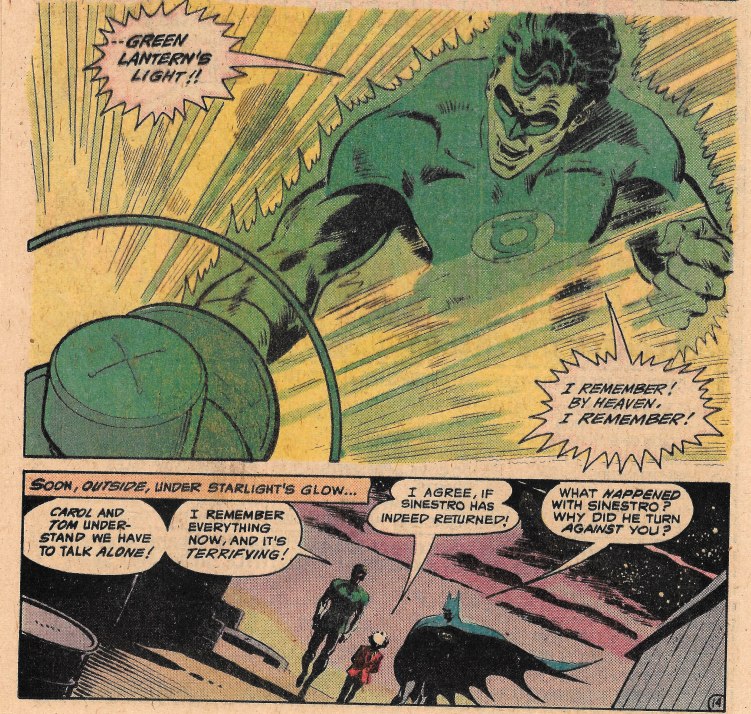 As always, that does the trick. Seems like Sinestro is involved in something terrifying that has Hal very upset. He relays this as well as Sinestro’s origin, presented here in the spirit of complete disclosure. 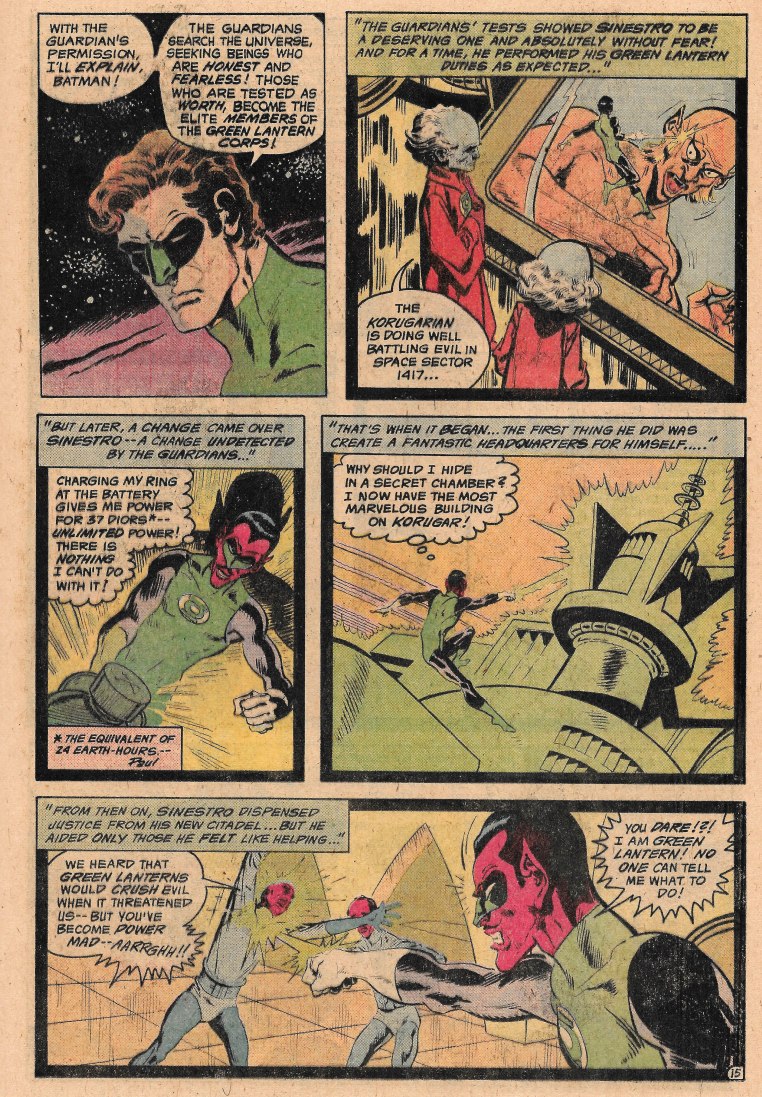 Neat to know that Sinestro set himself up as a little tin dictator of his planet after getting his powers. I knew he turned evil, but always assumed it was a more subtle manner than this, given how he surly would be found out for lording it over his fellow Korugarians. 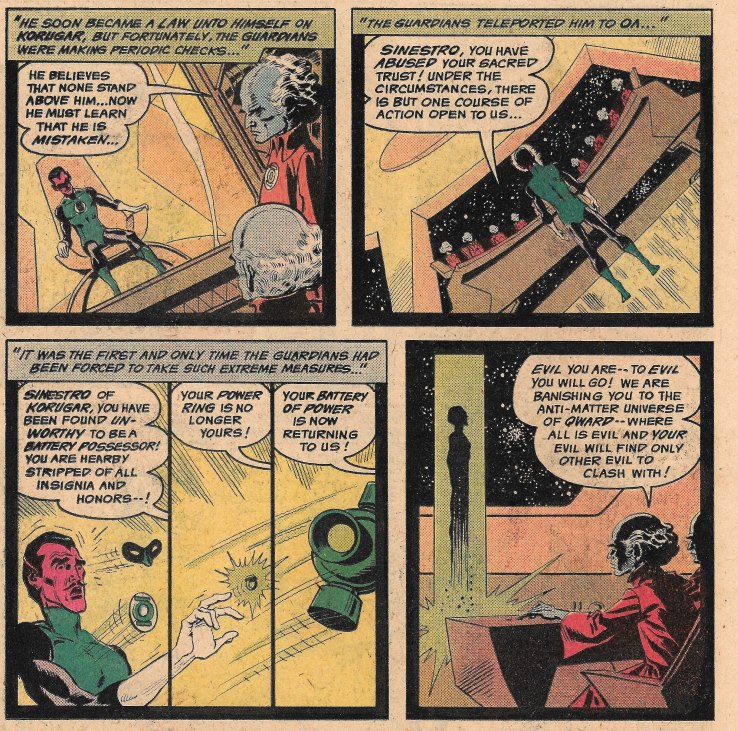 Which, of course, he was. What followed was the Guardians stripping him of his powers and his exile. So to bring us back to our current tale, Sinestro is posing as one of the Guardians for some nefarious purpose. 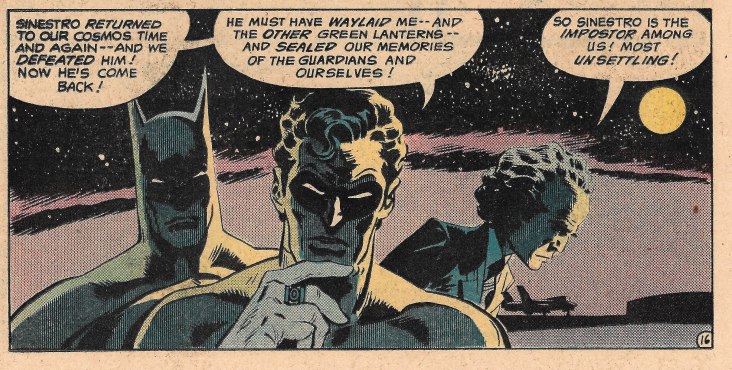 As the three heroes ponder, Batman becomes crucial to finding out which of the Guardians has been replaced. So off they trio go, on to a part II that I don’t have. Sadly, GL makes the Guardian get rid of his smart looking threads. I had hopes we’d be able to tell him apart from the other Guardians we might encounter. 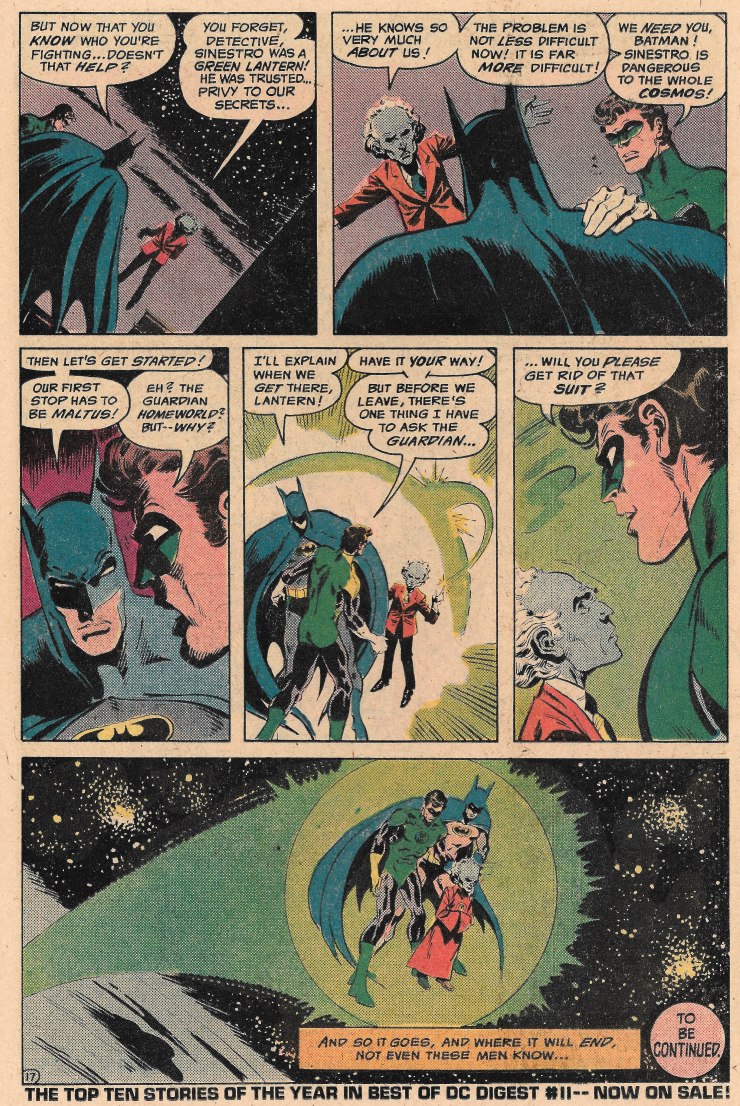 A pleasant start to this tale which holds promise of a great wrap-up in the following issue. Aparo’s art is on point as always while Conway serves up lots of great interaction and story. Now I guess I have to head back to the bins to find part II at some point.
Posted by SonOfCthulhu at 4:07 AM