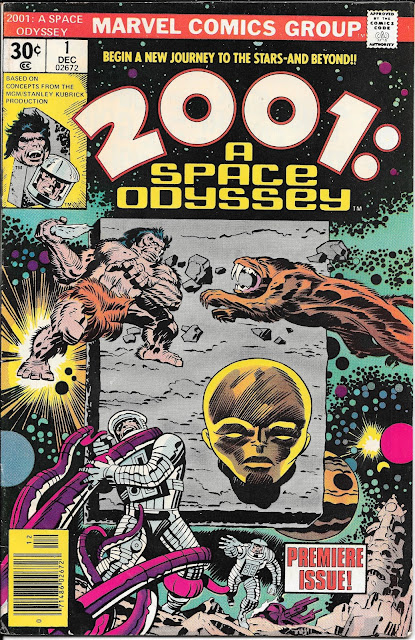 Jack Kirby holds a funhouse mirror up to a Kubrick classic

With the opening of Star Wars: Rogue One, I thought it only fitting to look back at one of the classic sci-fi movies that paved the way for its existence. 1968's 2001: A Space Odyssey, Stanley Kubrick's adaptation of Arthur C. Clarke's short story "The Sentinel," will go down in history as one of the most elaborate science fiction movies ever made. It is a marvel of cinematography and special effects. 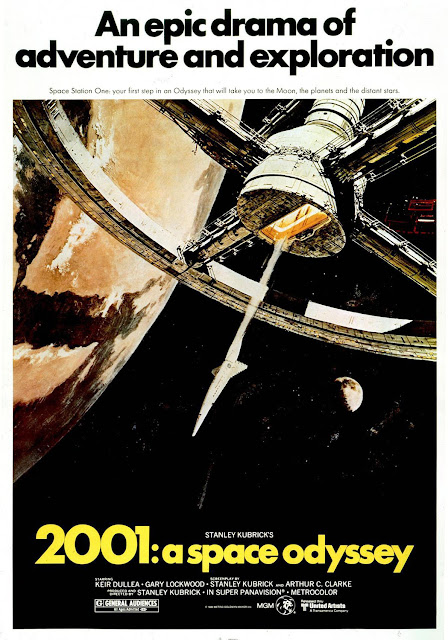 And many of you hate it.

It is ambiguous, slow, breaks standard narrative conventions, contains no one central protagonist, and relies on the audience to figure out the ending. I don't blame you if it isn't your bag.

But it totally is mine. I loved it the moment I first saw it. Sears in Hulen Mall. It must have been around 1980 and that would have made me just about high school age. Those still new VCR recorders were being demoed and Sears put in a tape of 2001 and had it playing. My parents went shopping in the mall and left me to my own devices. And I sat there and watched it. All the way through. And then still sat when they started it back up again. There was no sound, but the visuals were mesmerizing. I was transfixed.

I still am to this day. The fact that the ending is largely unintelligible does not dissuade me from recommending it. There are just too many thought-provoking ideas crammed into the movie as well as pictures too astonishingly beautiful to ignore. In the end, I judge it to be a perfect movie with flaws, a contradiction as powerful as the images it conveys.

One of my favorite podcasts reviewed it HERE, and the guys and gal at LSG had some interesting takes on the film.

In 1976, Marvel released an adaptation of the movie in its oversized tabloid "Marvel Treasury Edition" series that signaled Jack Kirby's return to them from his stint at DC. The book varied a bit from the film as Kirby pulled in notes from the Arthur C Clarke novel and from an earlier draft of the script.

But it was in no way as odd as Kirby's ten issue, ongoing series follow-up to the movie. Kirby created a similar but different take on the original material and then went way beyond it. The last three issues introduced the character Machine Man or X-51 to the Marvel Universe. The sentient robot became 2001's protagonist and provided a springboard for his short-lived unlimited series that Kirby would also pen.

This issue that I hold in my hand takes place way before all that and it ends up being something I'd call "Just Imagine" if Jack Kirby had wrote the screenplay for 2001. It is kind of awesome in its own regard, weird and quirky and very off the beats that the film creates. However, in some regards, "not off those beats" as well. Let's have a look, shall we?

We begin as the movie begins, in pre-history, with one of the proto humans, this one called Beast-Killer. 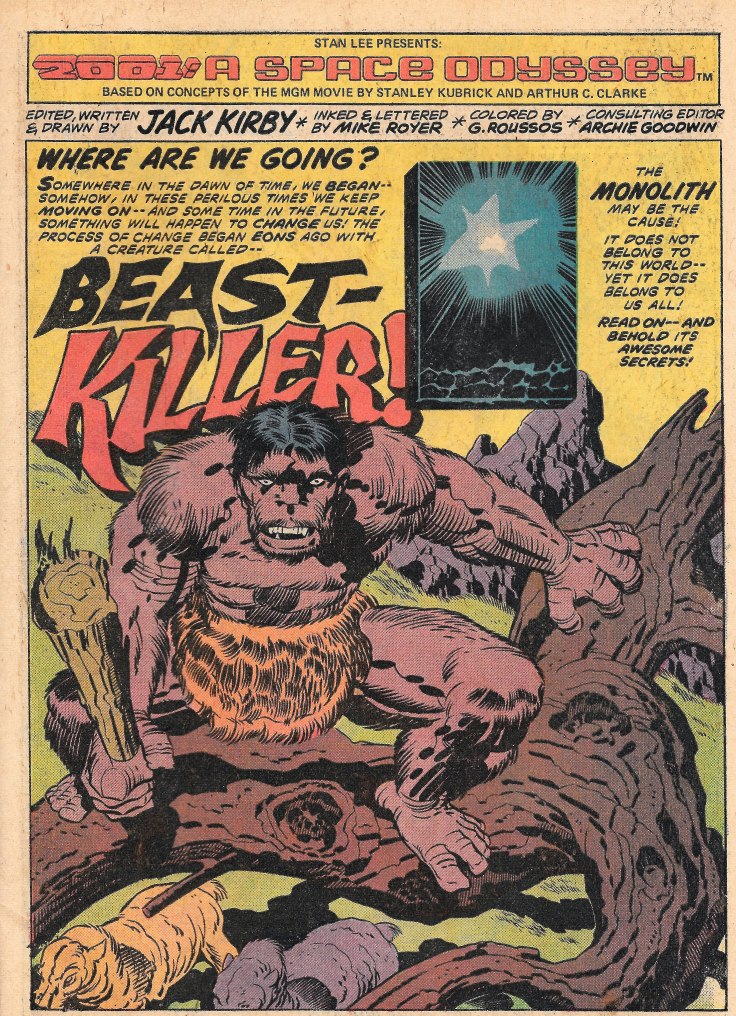 Beast-Killer hangs out in what would be present-day New Orleans, and why that is important only Kirby would know. Beast-Killer has to be the most educated and erudite caveman I've ever encountered and that includes Brandon Fraser's Encino Man.
The Kirby art in this is just astonishing. He was a unique talent. 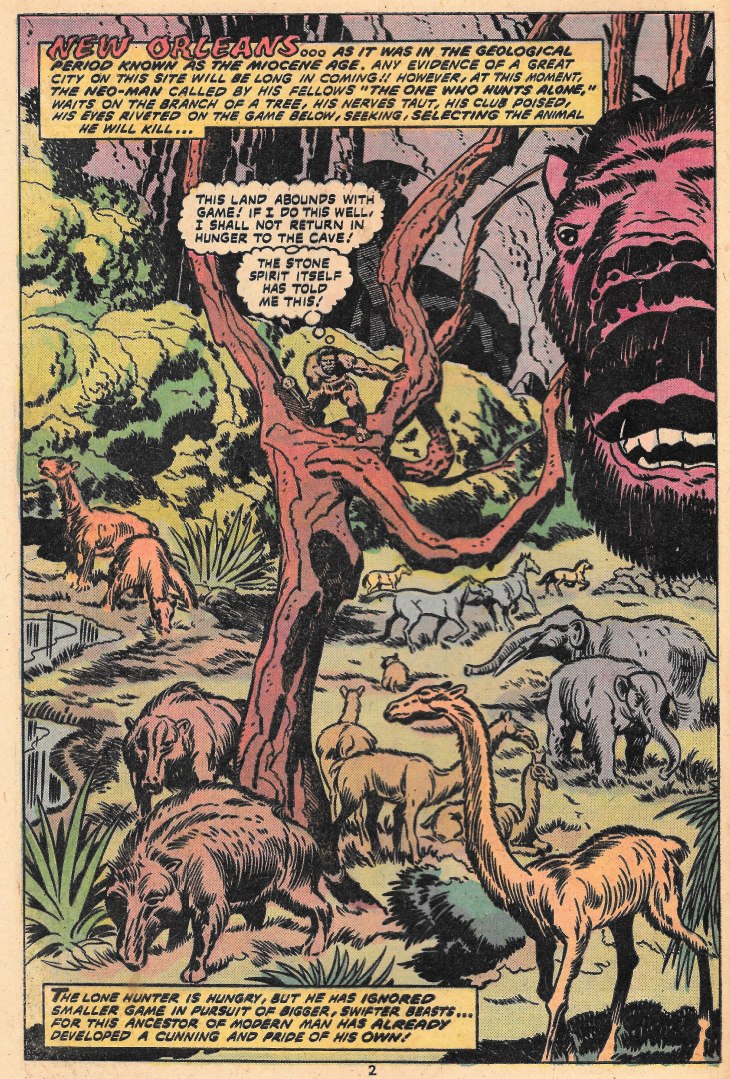 Anyway, Beast-Killer does what his name implies and using the power of the voice of the "Stone Spirit", i.e. The Monolith, he learns to attack swift game from the trees. The only issue I have with Kirby's writing at this point is that everything is an excited exclamation. Nothing is simply said and for a reader that does make a difference. Shouting every line doesn't get your point across, it just makes things very noisy. 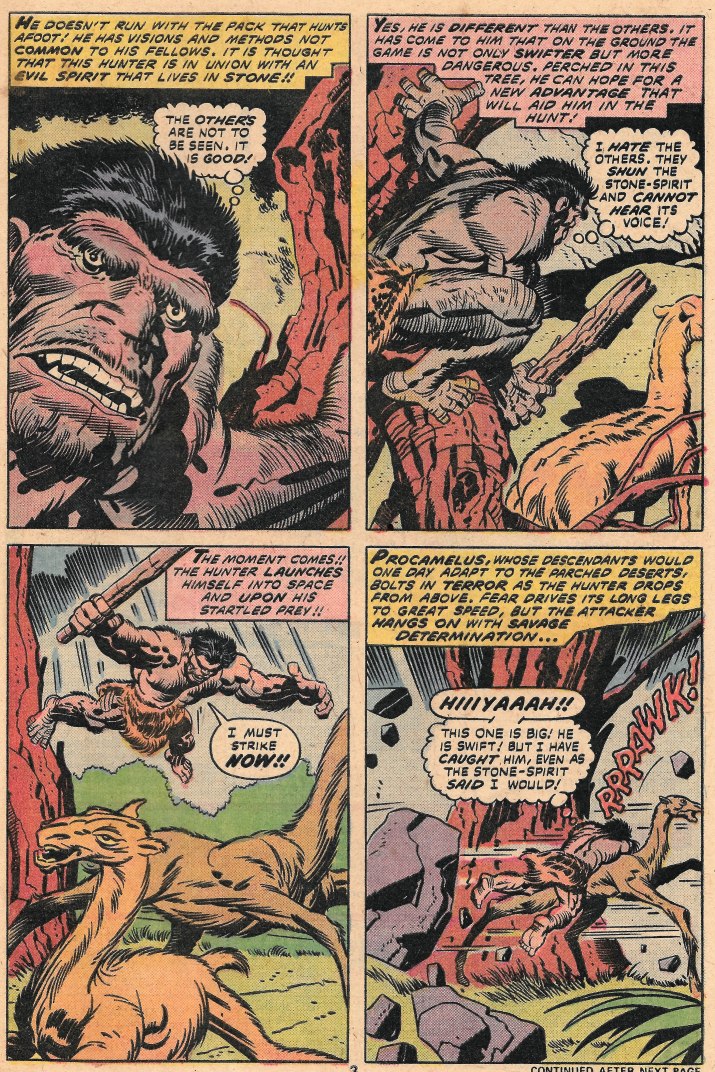 We see this even more as Beast-Killer is attacked by others from his tribe and every spoken statement is delivered with the same degree of amplified shouting. Kirby can do dialogue, but he needs an editor willing to step in and apply some restraint. That isn't happening here. The result is a very childish narration. 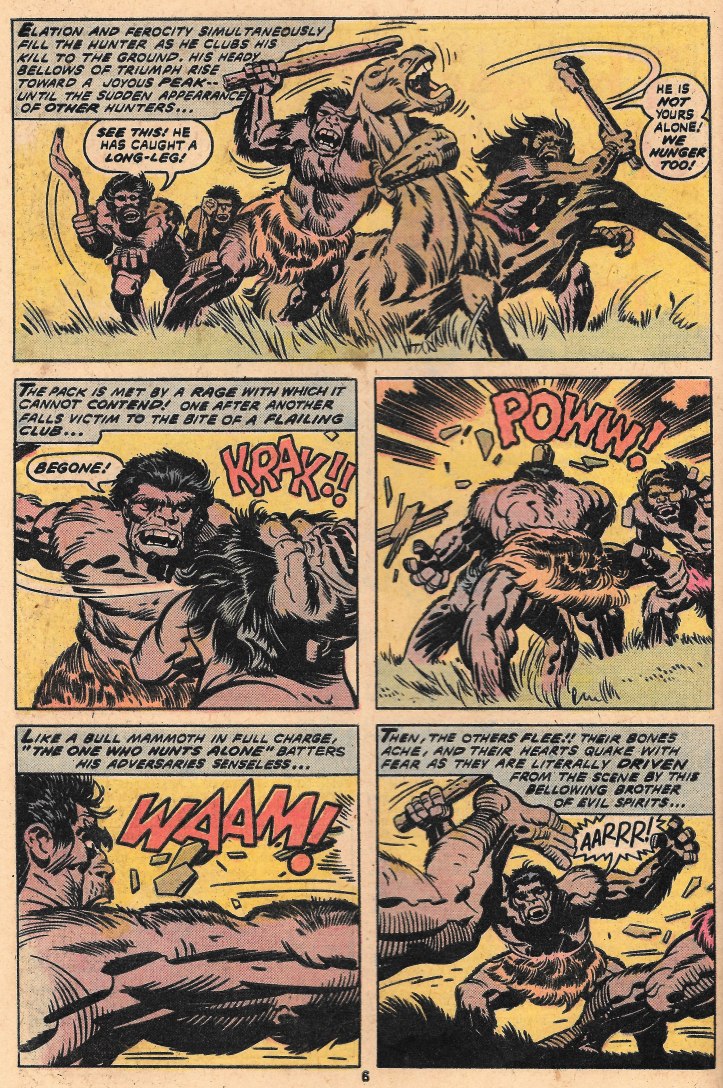 The story moves forward a pace, and note how it parallels the 2001 movie – we begin with a single ape-guy that has touched the Monolith besting other beast-guys that haven't. The difference here is the free reign that Kirby had to crib the story any way he wanted to. It is damn interesting in this character he's created that we feel he has a long term investment in showing his struggles and fate, but it gets way better when we get out into space. 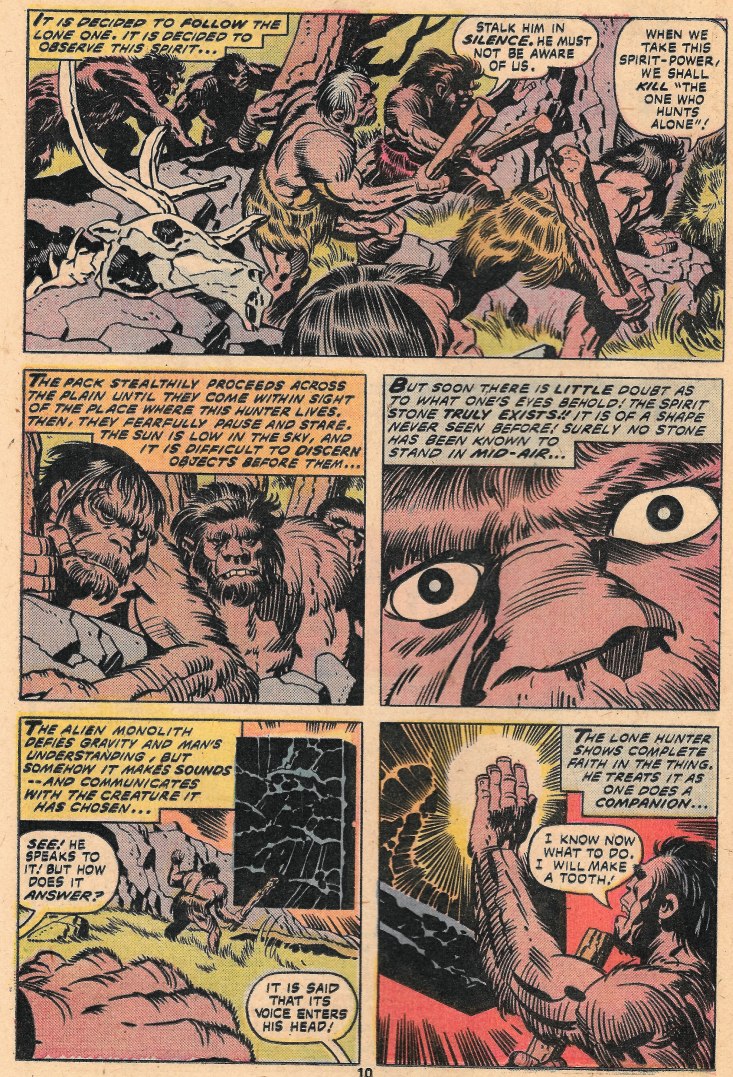 We get the Monolith finally to make an appearance as Beast-Killer his shadowed by his fellow monkey-men. 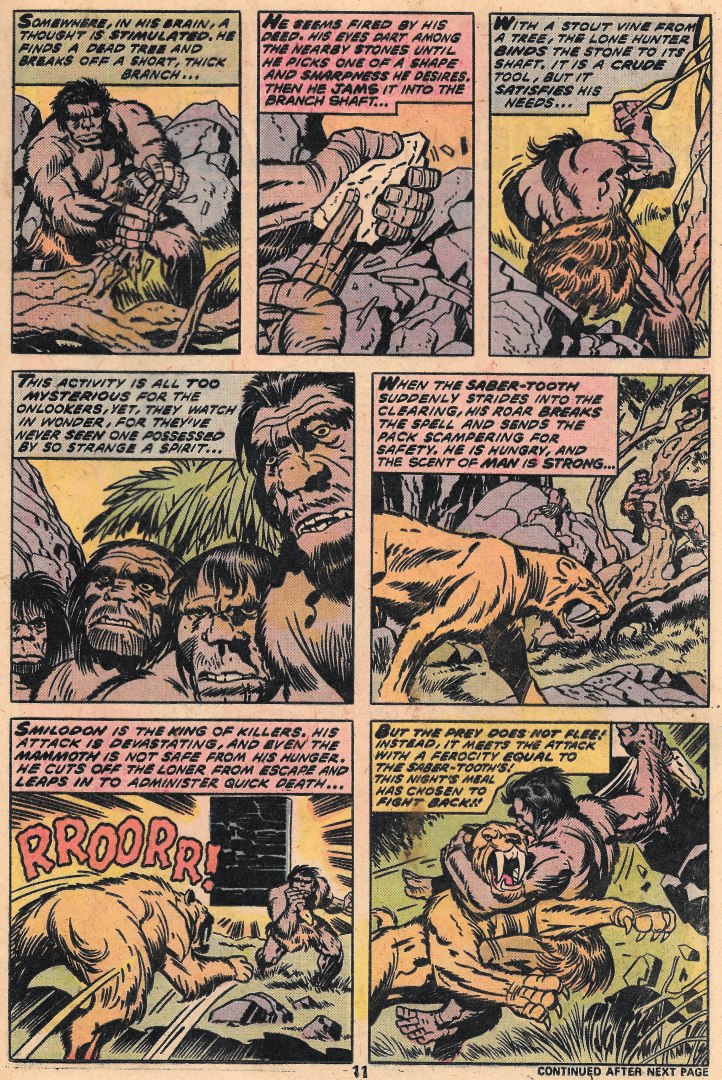 Then we get Beast-Killer to go the movie one better as the Monolith makes him smart enough to craft a crude spear. My only gripe with all this is that the Monolith is treated as little more than a object in these parts. In the movie it is a bizarre entity with its own desires and plans that is clearly more than it seems. It is given such prominence that the movie makes it seem like a character in the story with its own personality. And it has a plan for us. I had hoped we would get that same power here, but Kirby appears to be using it the same as a Mother Box in his New Gods books…a simple tool that you use, not as an alien person with their own objectives.

Beast-Killer does in a sabertooth tiger with his newfound spear skills. Kirby almost lets the Monolith have a moment, but is too focused on his Beast-Killer character to do that. So now we have an extended piece about how to make better spears… 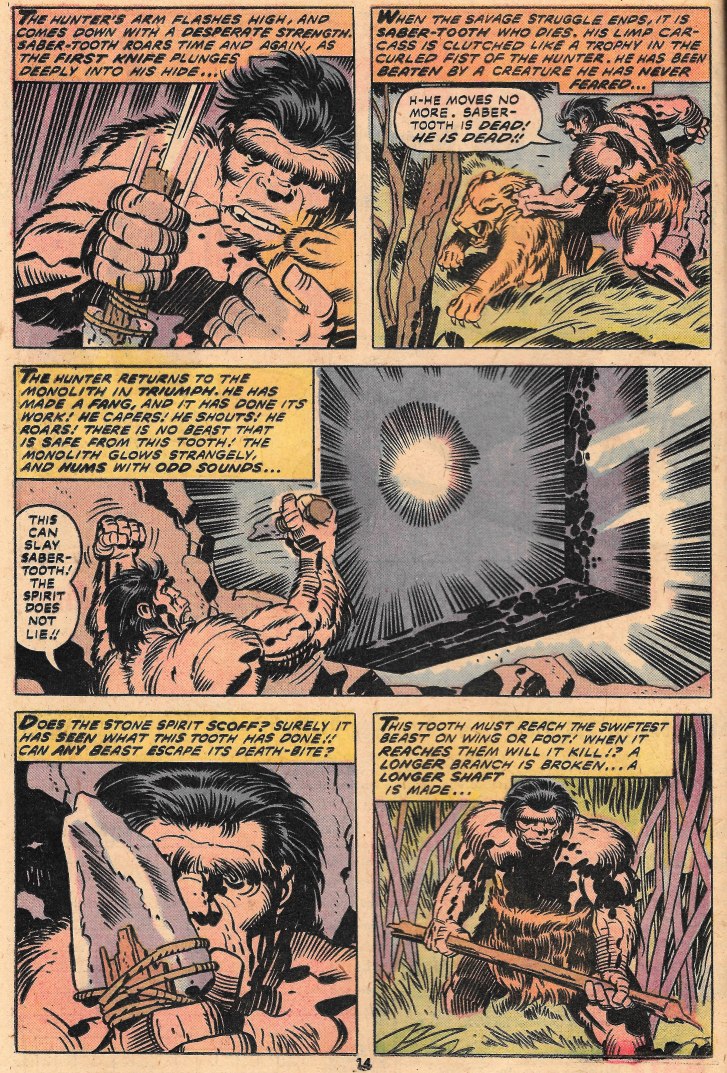 And then we get into a really neat transition that mirrors the "bone toss" scene from the movie. I kind of dig this move from Earth to space, even if the space stuff is really crazy. I believe Beast-Killer's saga continued on in later issues. But now we move to Woodrow Decker, astronaut, our stand-in for Dave Bowman. 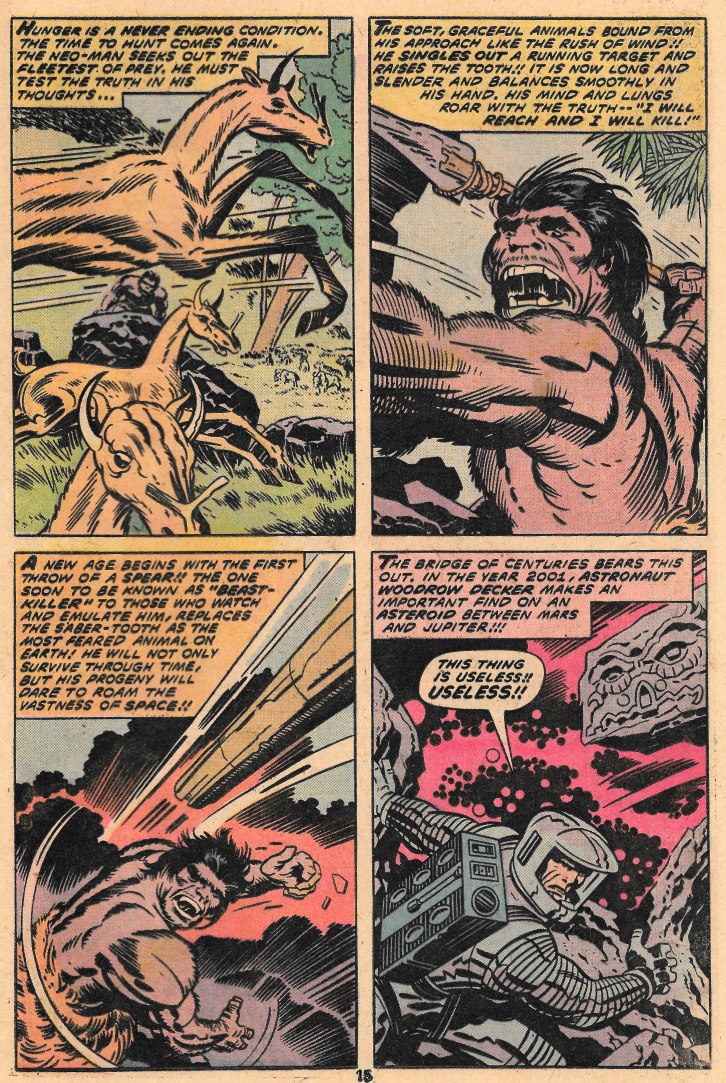 Decker and his companion Mason are stranded on a world with ancient ruins where their space probe crashed. Here again is lots of yelling, especially by Decker who appears to be an out of control hot-head. The art is great, but there is something noticeably absent. Shouldn't take you a second or two to figure out what that is. 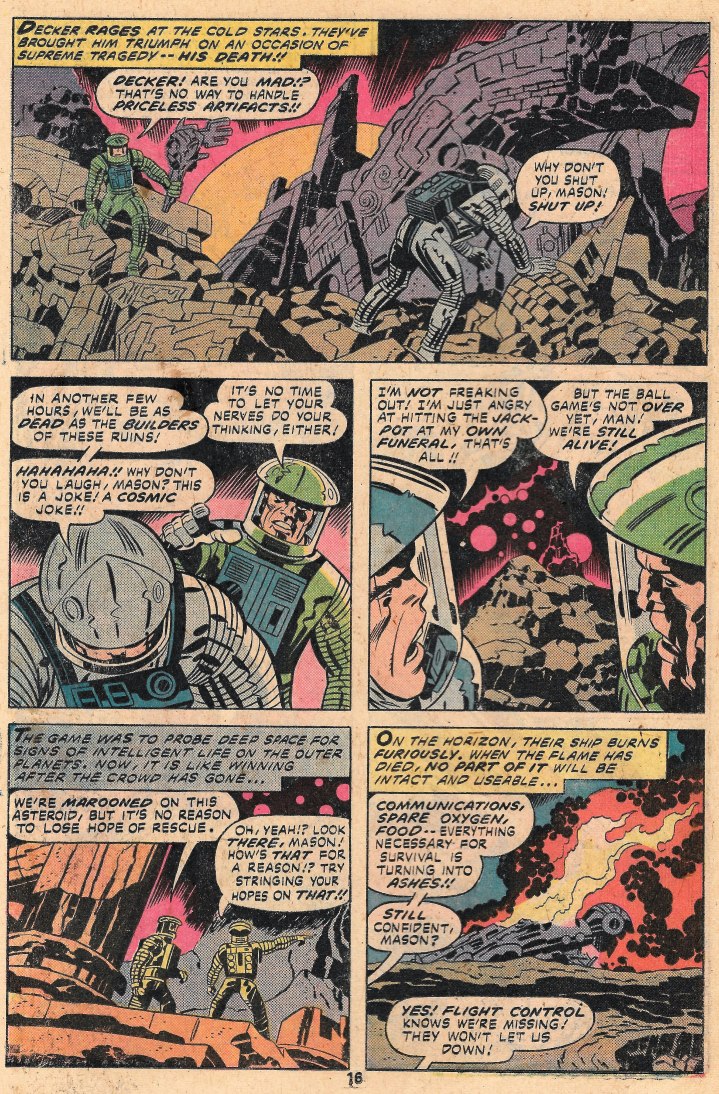 Because of the crash the ship, there is no Hal stand-in for this part. I know Kirby is trying to take the same story and shine it up a new way, but Hal is so integral to 2001 that his exclusion (or barring that,  the inclusion of a stand-in for him) is a glaring mistake.

Even when you do get giant magenta space-octopus monsters. 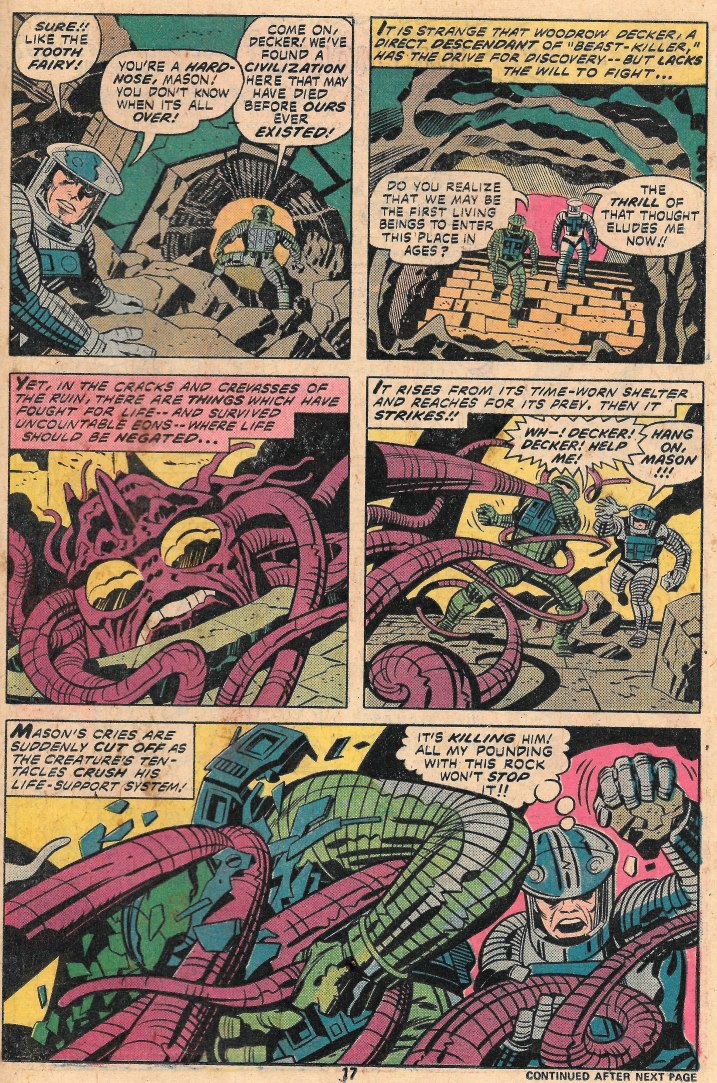 Sorry Jack, as fun as that looks you still need a psychopathic all-powerful computer or it just isn't going to thrill the audience. Anyway Decker comes off as even more of a jerk here as the level headed Mason gets grabbed … 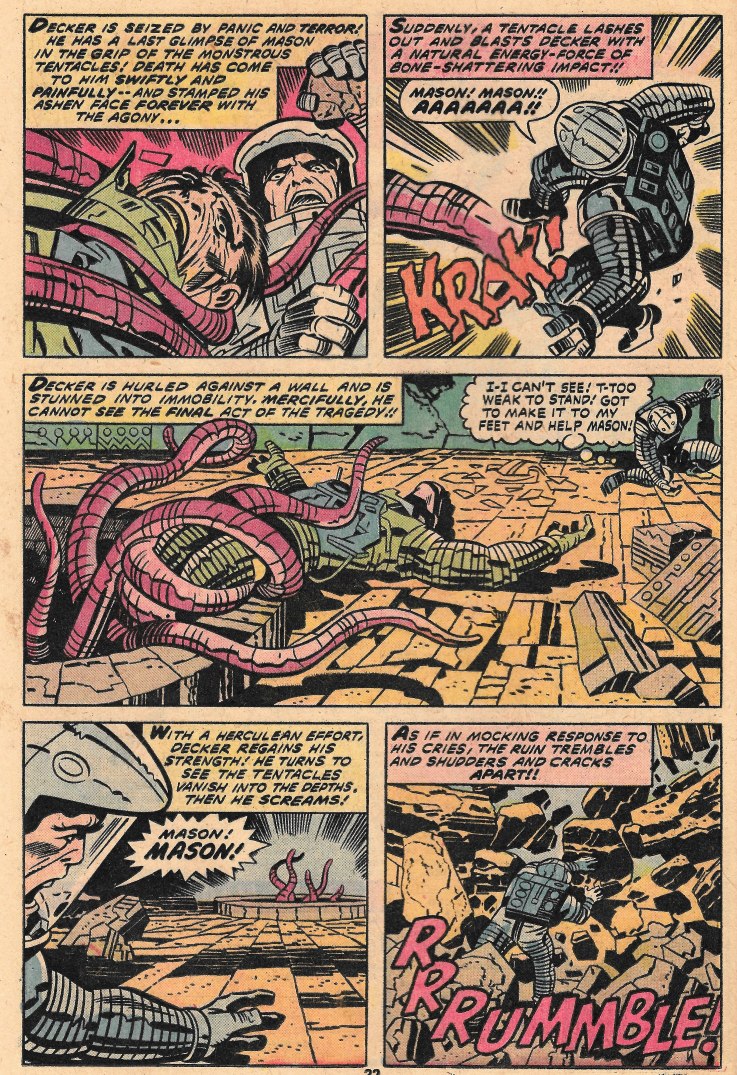 … and killed. Kirby outdoes himself on that death scene and the monster dragging Mason's body away. Very creepy. Love his art so much. 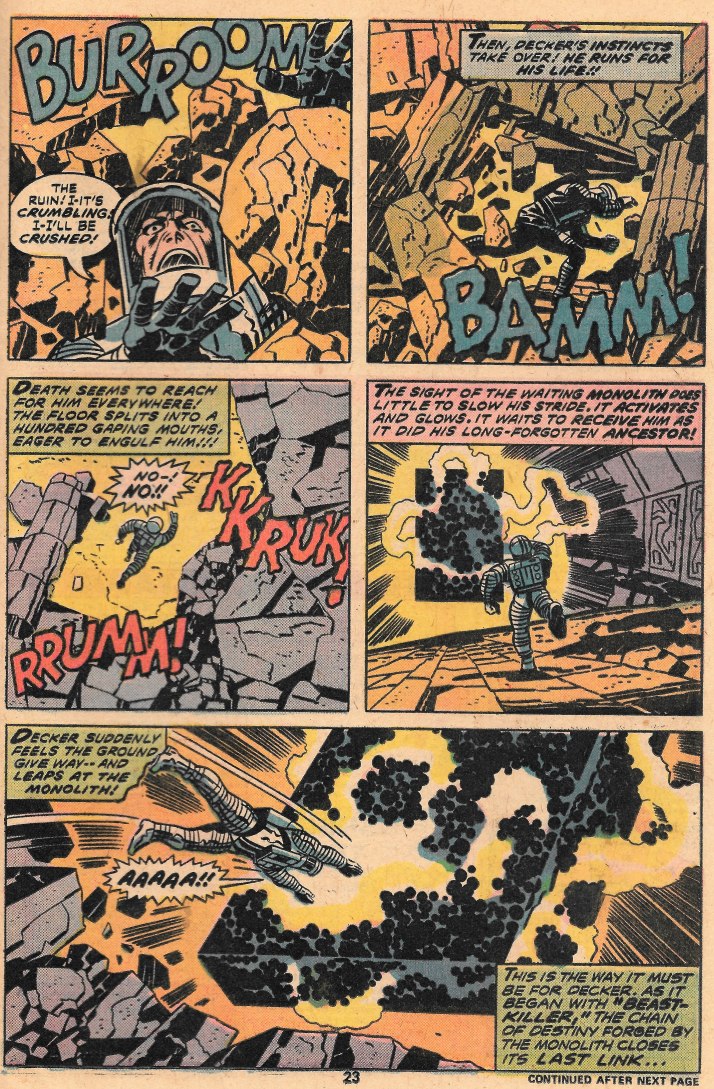 Decker's entire world falls apart at that moment, figuratively and literally. He's forced to jump in to the hovering Monolith, which now glows with Kriby crackle and power smoke. 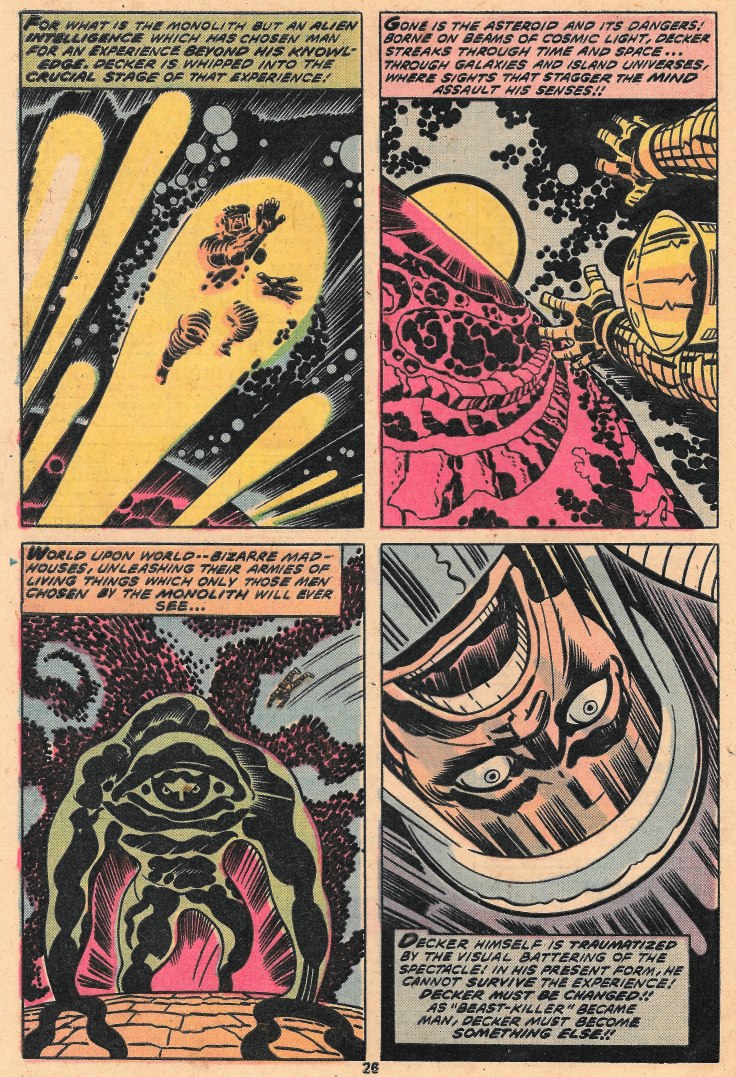 We get a taste of a Kirby interpretation of the Star Gate scene, which you have to admit is all kinds of awesome. And then… 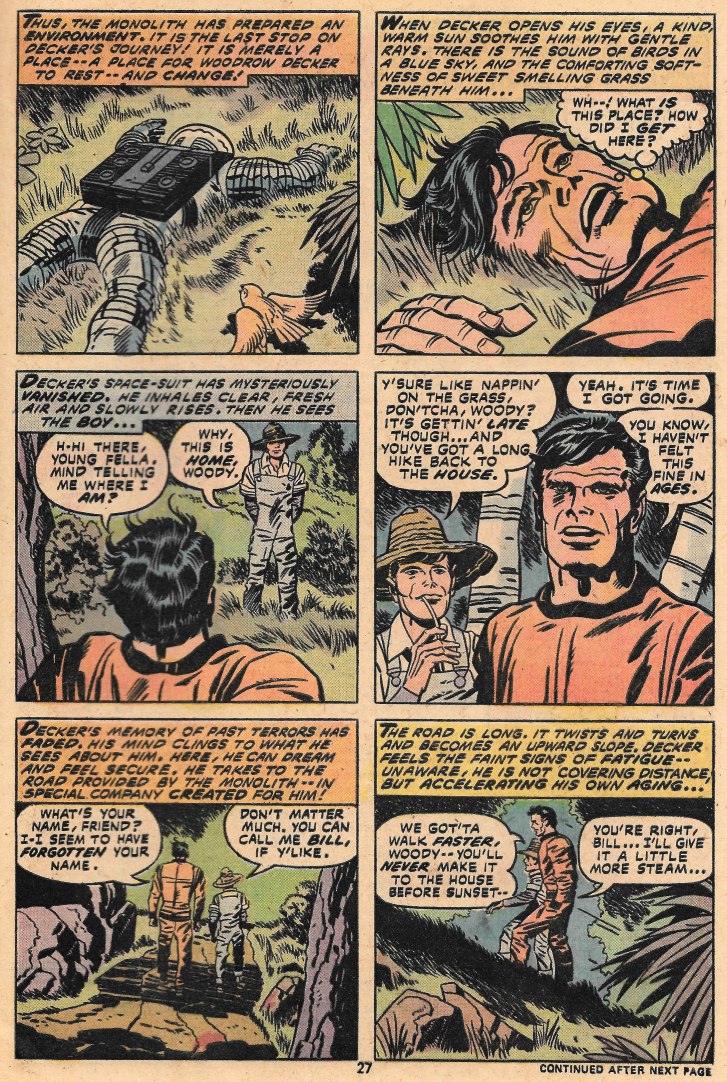 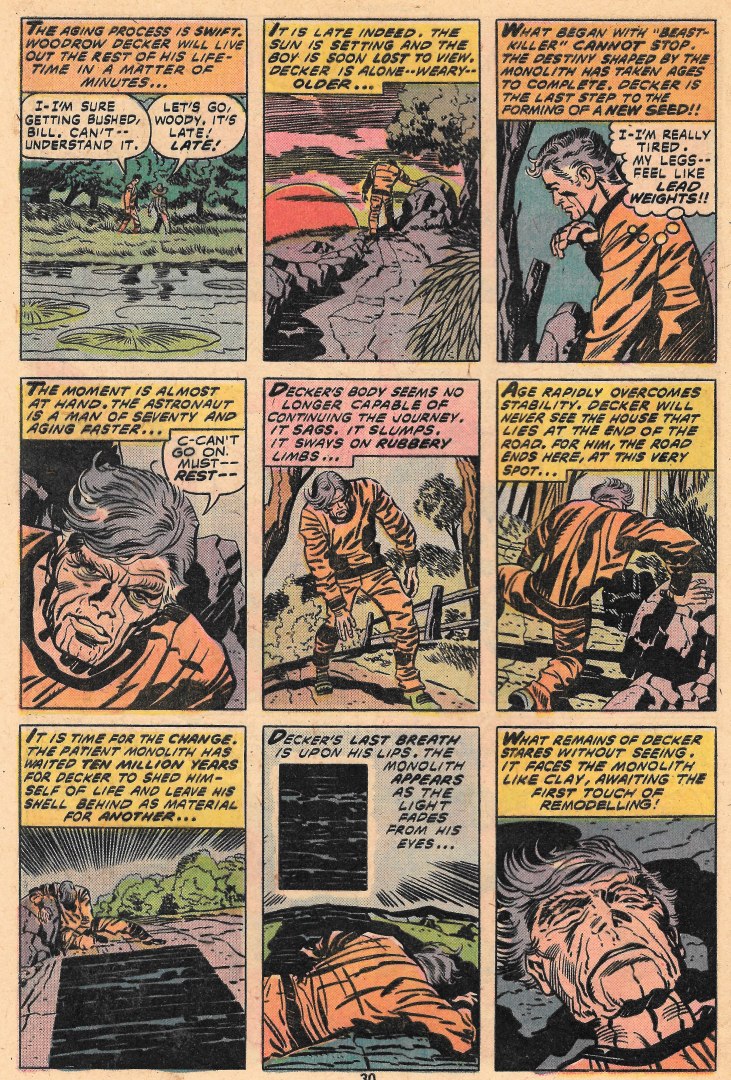 This is Jack's take on the ending of the movie and for some reason it works for me. It's no more odd than the Monolith putting Bowman into some kind of 18th century styled hotel and then feeding him until he ages and dies. And it at least makes getting to the Monolith an actual destination, as if man is striving to attain the things that would better himself. 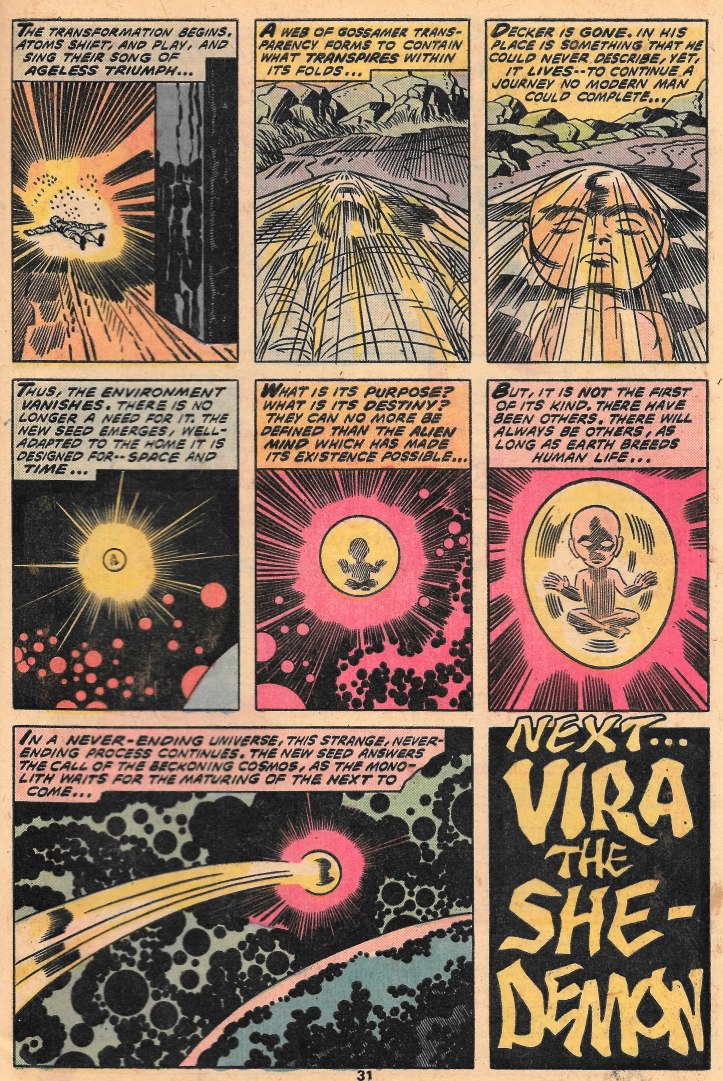 And of course we end with the Star Child flying off, Kirby's "new seed", off to do lord knows what. I have to state that I'm more than slightly curious what Kirby had him do. The entire issue is an off-beat retelling of the movie, what's missing are the things BEYOND the movie. Issue #2 must have gotten to those as well as something called Vira the She-Demon, a mate for Beast-Killer if I had to fathom a guess.

I hope everyone has a great time at Rogue One! I'll see you there.