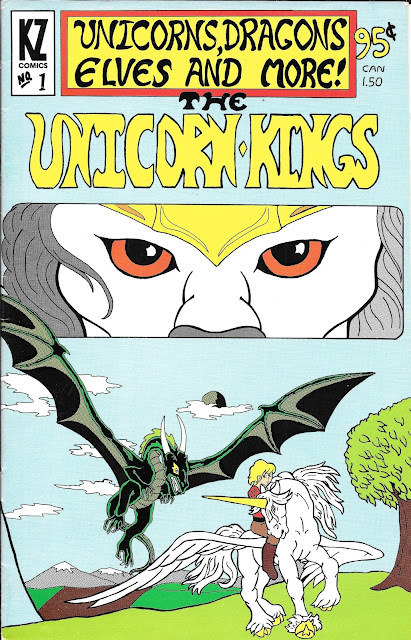 You know it when you come across them: Books written by authors and illustrators who are below a certain age. I'm not sure what exactly it is that makes them stand out, but there is something so earnest in what they try to create that you can just tell. Youthful idealism. Juvenile transitions. Hewing to a certain artistic naiveté. I don't know, but when I come across them I feel an affinity for them on a very personal level.

I mean who among us didn't toy with the idea of creating a comic as a kid? Or a book? Or something much more complex than we gave it credit for, yet still we made the effort?

We go in with all the exuberance of a four-year old, someone fresh and full of burning desire. And then the world takes a big dump on us so many times that we develop a more cynical outlook and battle-hardened skin of steel plate.

It is the way of things.

So it is at risk of sounding callous and heartless that I review The Unicorn Kings #1 from KZ Comics.

KZ Comics was a small Cleveland-based publisher with very few titles in print. They existed for that brief span of time when comics underwent a black and white renaissance. Initially created by Tom Zjaba and Dave Karolczyk, who were the "Z" and the "K" of KZ Comics, the company was lead by one man. Zjaba found himself the major creative force when Karolczyk stepped out before the company got off the ground. Undeterred, Zjaba continued, churning out an attempt at a Cerebus knock-off vanity project called Colt with the help of a local artist. We will get to that book later.

KC Comics lasted from June of 1985 until December of 1986, producing only six comic books before losing their distributors to bankruptcy from the glut of books being produced at that time. In 2006, Tom Zjaba took to the internet and recounted all of this on a web page dedicated to KC Comics. He since let the ownership of the domain lapse and it slid off into the ether, now only available through the Wayback Machine.

It makes for interesting reading. The Colt book and Crossed Swords book were both very weird tales.

He had another title in his stable too, a book titled The Unicorn Kings. Zjaba enlisted a young lady by the name of Holly Zewalk to expand her short unicorn story into a book-length, all-ages comic. Zewalk was writer, artist and letterer on the book, of which only one issue was published. This is the book we are going to be reviewing today.

You can tell by the cover that Zewalk has a cartoonish penciling style that makes the pages look much like a coloring book. I'm not fond of her human or elvish characters but I'll give her some props on panels showing her mythic beasts.

I'm in full agreement if you say the panels that I will show here are amateurish, however we have to cut her QUITE a bit of slack as she was drawing this book as a freshman in HIGH SCHOOL. Yeah, that means she was all of fifteen to sixteen years old. Hard to really tear into art from someone who hadn't been to senior prom yet.

I've spoken with Miss Zewalk and even she admits that "I could have done some of it better. It was a big learning curve for me." She had no formal training at the time and no one to really mentor her. 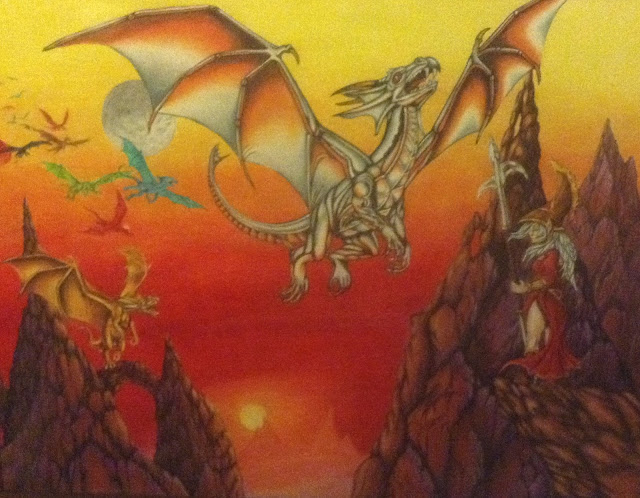 It is notable that Zewalk went on to complete five years at Cleveland's Institute of Art and earned her Bachelors, so likely what she says is true. Her current art and sculpting work can be found HERE.

The interiors are a bit worse than the cover, with this first panel showing some odd proportions and a sun that looks like it came out of a grade school coloring book. Zewalk wanted this story to be an all ages fairy tale so some of this stylizing is understandable. 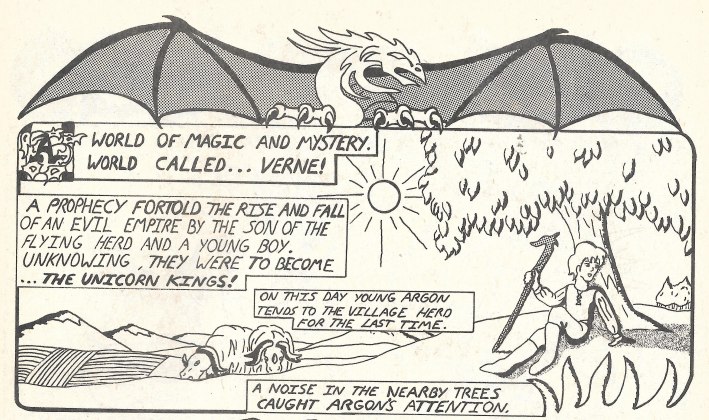 What isn't understandable is that dragon above the first panel, and let me explain why. Every page that Zewalk drew for this short comic had a header and a footer image. The effect I suppose was to give the reader the impression they were reading an old style storybook for children, one with limited art panels but boarder art in the margins of each page. In general she achieves this feeling.

However Holly (if I can call her Holly) didn't draw just ONE header and footer to adorn the pages of the book. No. She drew unique headers and footers for EVERY SINGLE PAGE. This is a massive amount of work when you think about it. You get a breadth of the style she is trying to accomplish with it and have to give props to her.

Even when the pictures totally distract you from the story at hand. Like one page that we will get to has the hero interacting with some characters and the bottom footer image is of some wolves howling at the moon. My natural inclination was to think "oh shit! Wolves are going to attack them!" but instead it had nothing to do with the story in progress.

A more seasoned professional would have axed the idea after trying it for a page or two, but Ms. Zewalk was far too young to see the interruption of the narrative flow these would create and also waaay more dedicated to telling her story her way than any older artist would have been. So there they sit. On every page.

I will honestly admit to liking those header/footer image more than the ongoing story. It showcases her style and provides a unique texture to the underlying narrative she is attempting to create.

They work, even if much of her story doesn't due to the predictable tropes being used.

As you can tell from the image above, we begin with a very ham-fisted storybook opening that is high on tell and low on show. The children's fairy tale model is being used and I can't fault some of it. We get introduced to our heroes Argon… 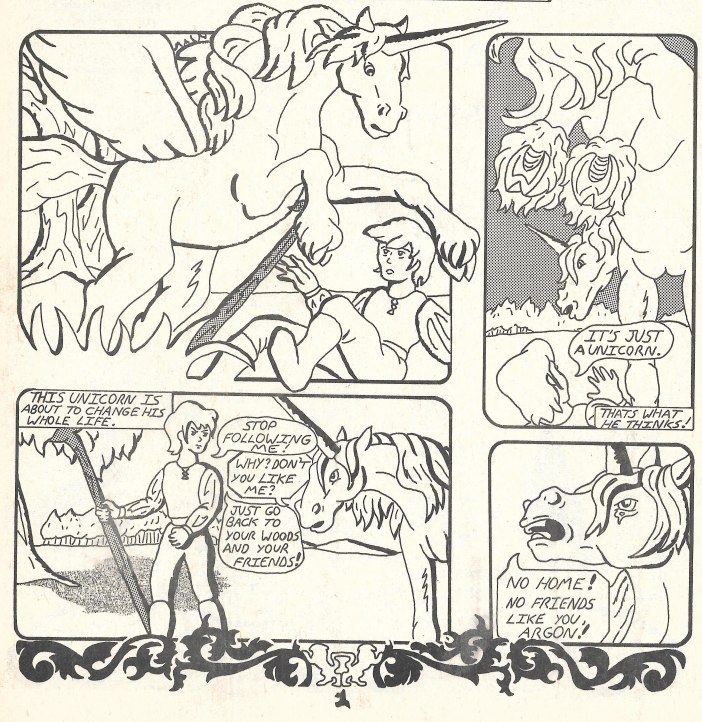 And his odd-talking Unicorn companion. The exposition becomes a bit grating as it insists degrees of gravity not introduced. Again, this is a "telling the audience" instead of "showing the audience" problem. I get that Zewalk is attempting a fair degree of foreshadowing here, it just doesn't work for me.

That little stylized footer does though. Someone could easily turn that into an arm tat. 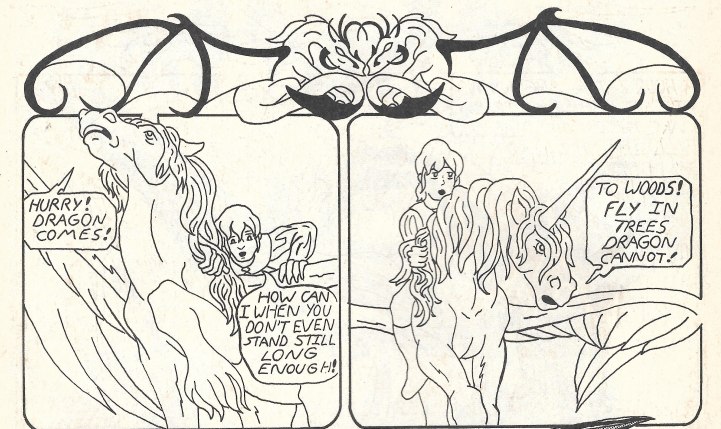 Suddenly the unicorn claims a dragon is coming and Argon jumps on his/her back to flee. That unicorn "Yoda speak" starts to trickle in and I begin to get annoyed with it and then realize the top of this is two dragons butting heads and think of the effort it took to include them for this page and this page alone and…what was I saying again?

I mean there is just a Titanic-filled boatload of effort going into this thing by some young girl who is possibly trying to pass Algebra II at the same time as drawing all this and I can't muster my usual sense of biting sarcastic wit.

There, Unicorn Kings! You've defeated SoC and his ability to tear into a book for its readily apparent deficiencies. Curse you and your serious and sincere attempt at creating something different and new. No, I'm not saying the book is "good". I'm stating that the book tries its damnest and I can't fault that.

I'll try to make the rest of this painless and quick. Next the pair meets a telepathic talking bird… 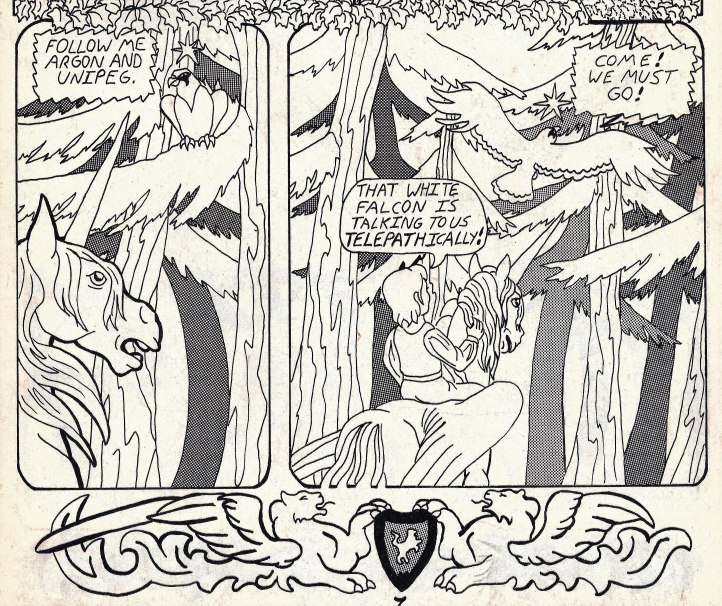 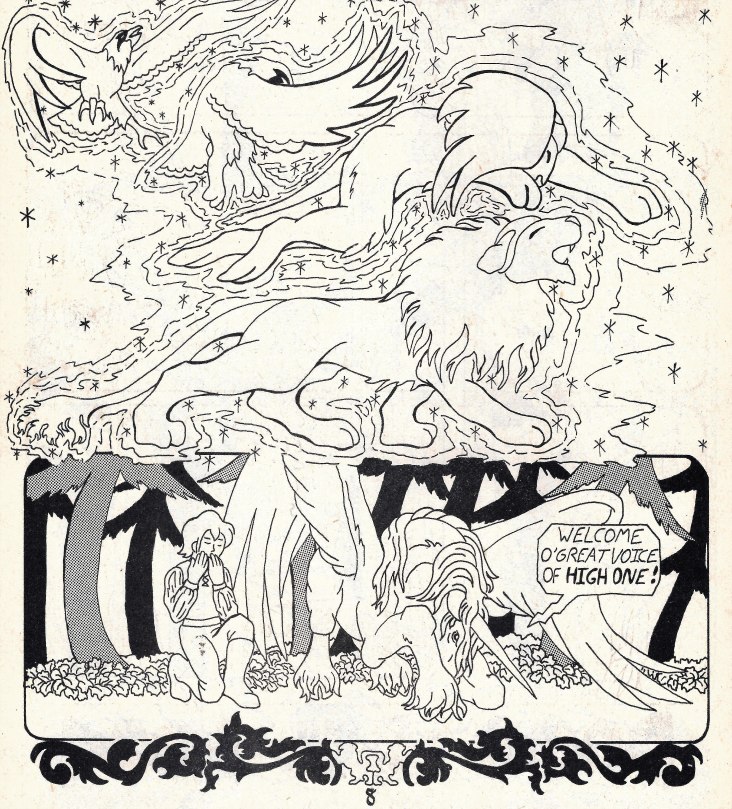 …who then proceeds to dole out generic prophecy of defeating great evil afflicting the land (I agree with the dragon, can I sleep through this part? ooo! Neat crystal ball!)… 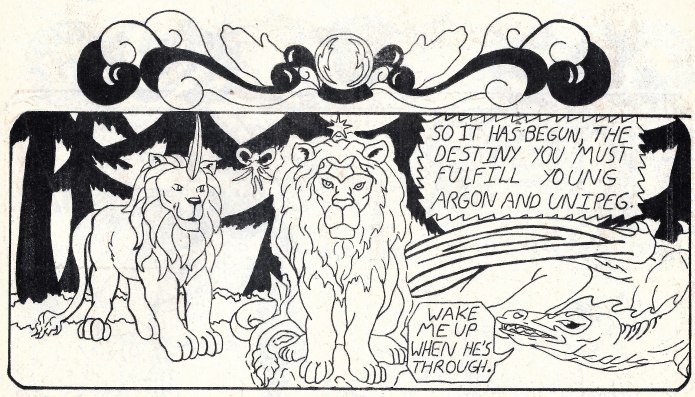 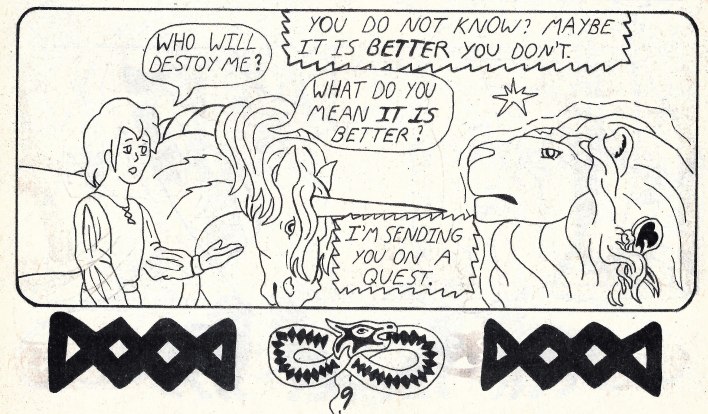 …then forces several companions on them, (there's those wolves I was speaking of)…. 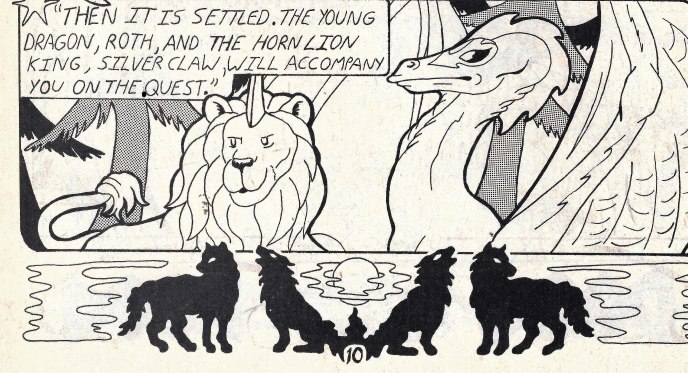 And off they set. We get introduced to the evil queen of the piece and everything starts to fall into place. It is cliché in the extreme, but given the stated task of making this a book for kids, simple plotlines do tend to work best. 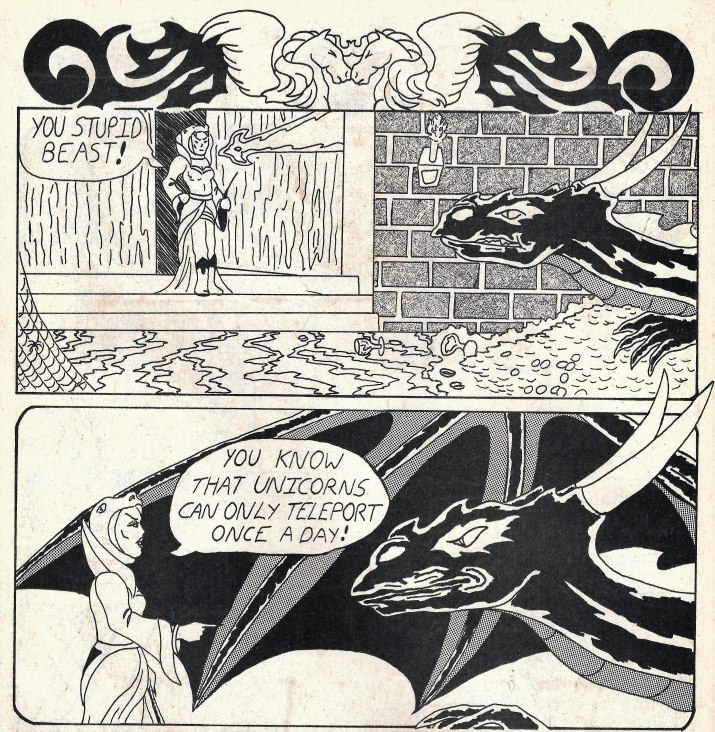 There is some slapstick humor thrown in that is silly but would probably make a small child laugh. (I DO like the face on the guard though) 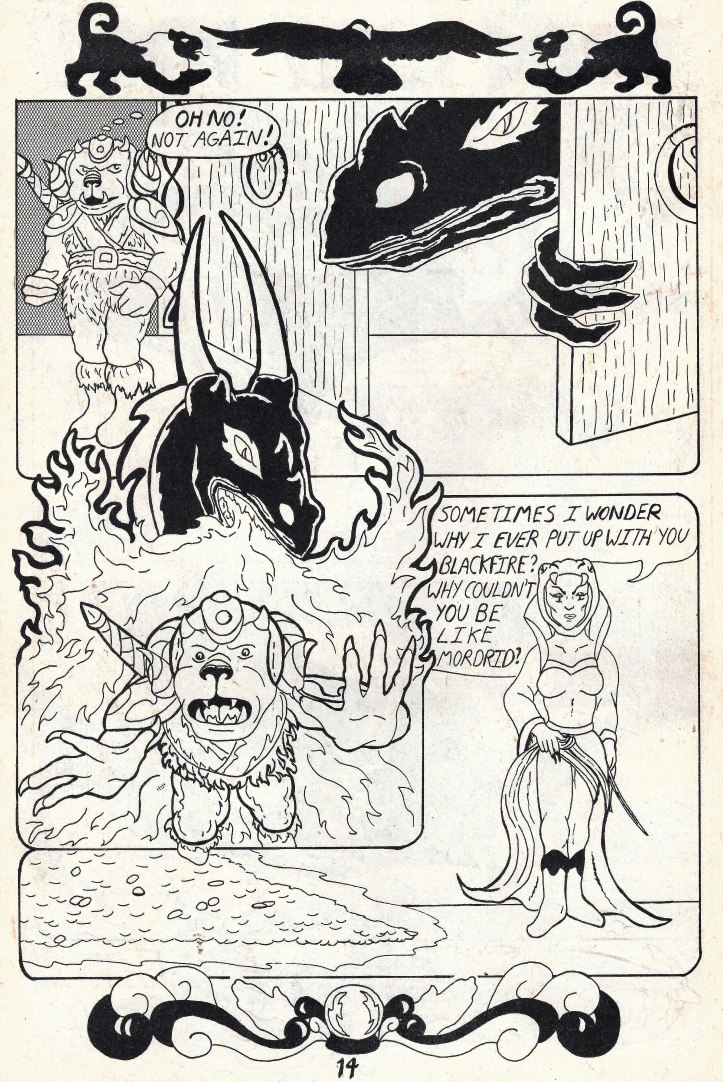 And we end on a cliffhanger that actually takes place on a cliff. 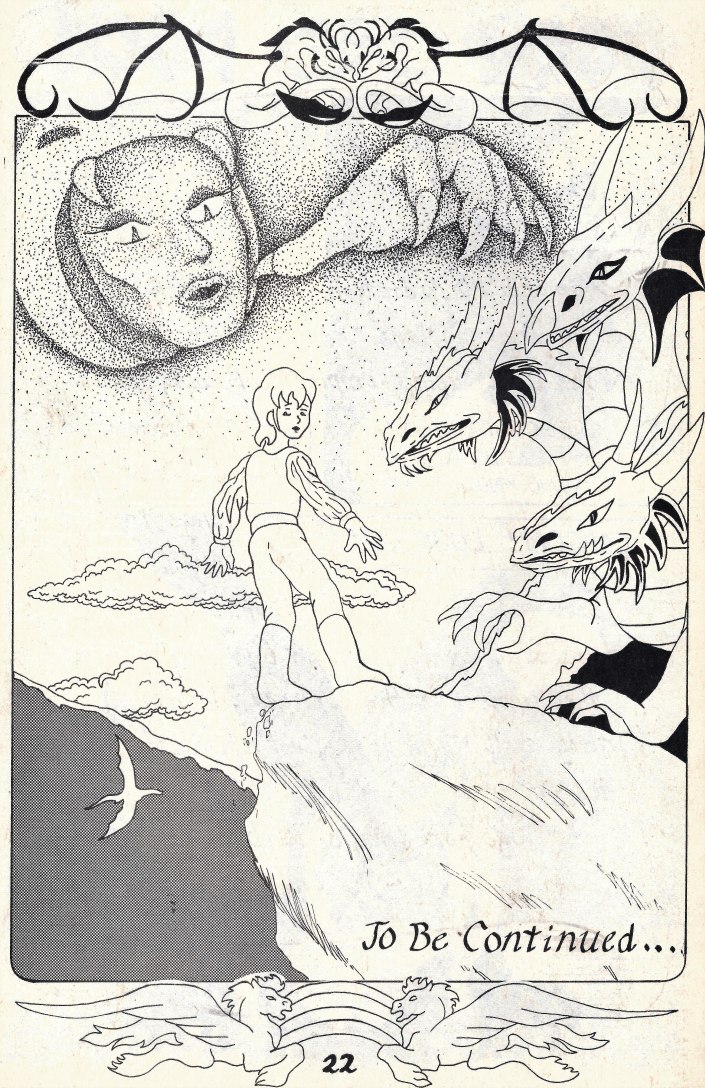 In summary, how do you approach a work like this? Do I lambast it because it isn't Elfquest reborn? Or applaud it because you have to encourage the next generation of artists and storytellers since only by practicing your craft will you ever learn to perfect it?

I know that were this my teenage daughter doing her darnest to put out a thing I would support her a million percent, rough edges and all. Because art (and writing, for that matter) doesn't get better without persistence. And people don't usually rise to the challenge of that work without a bit of encouragement.

Well done, Holly. Well done.
Posted by SonOfCthulhu at 6:02 AM