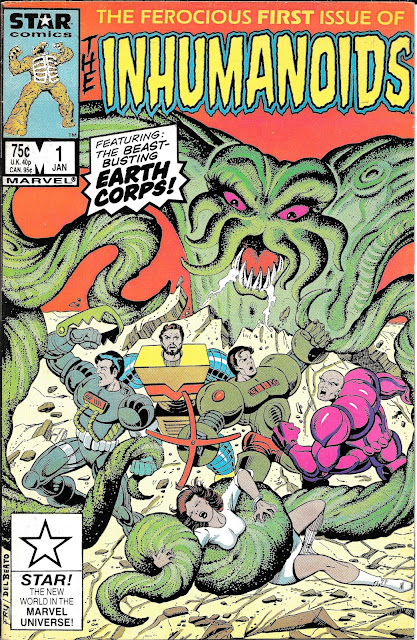 Hasbro believed they had the masterplan when it came to creating successful action figure lines.

And it is easy to see why. In the mid-80's, Hasbro had two huge successes with the revitalized G.I. Joe and the just-launched Transformers product lines. Figuring that the secret formula was action figure + animated tv show + comic book = sales revenue, Hasbro applied it to the newcomer C.O.P.S., M.A.S.K. and The Inhumanoids franchises. The results were not what they expected. With the Inhumanoids in particular. 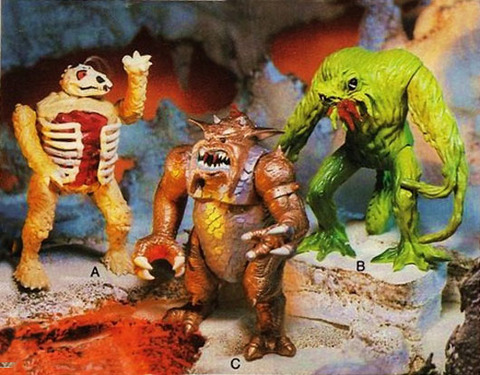 Unfortunately sales of this line appear to have been so bad that it never made it to a second season. The concept was good-guy Earth Corps scientists faced off against evil, giant creatures from a subterranean world. It was the oversized monsters that everyone craved from this with the rest of the action figures falling into the mostly forgettable category.

The TV show got 13 episodes, although the first five were all one show sliced up into seven minute shorts. So really only nine episodes. The comic book fared MUCH worse. Slated to recap the first handful of seven-minute episodes that introduced the Inhumanoids and the Earth Corps that opposed them, the comic book series made it to issue number four before being cancelled, leaving the fifth episode off. That final seven minute episode was crucial, as one of the main cast was turned into a zombie-like being. The comic ended with this sequence. Pity poor kids who read that issue and then never saw another. Nightmares for sure.

Are there some rabid Inhumanoids fans out there? Of course, and for a look at their collections go Here or Here!

Yuck, although I can honestly state I've seen toys that freak me out worse (*glances back to the Sectaurs).

And I can't think of a more bizzaro storyline than the one episode where the Statue of Liberty is revealed to be an Inhumanoid in hiding, albeit a benevolent one. 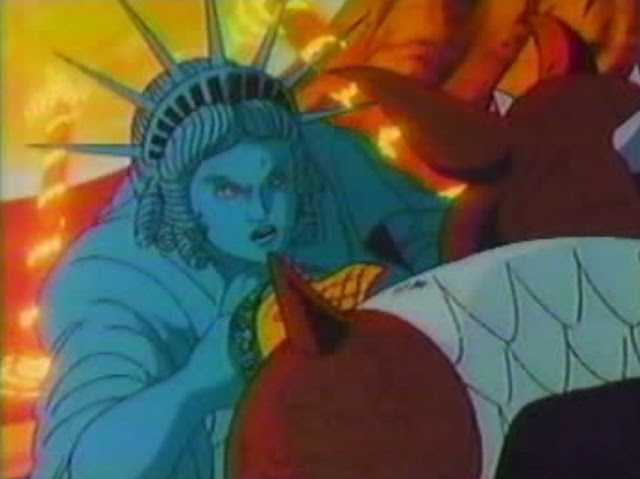 But you might be asking how does the comic of this failed attempt actually come across? That's the right question to ask, of course. We begin with Jim Salicrup adapting his little heart out. Here in Big Sur National Forest, it appears that someone has uncovered a big glob of prehistoric snot containing some kind of fossilized creature. 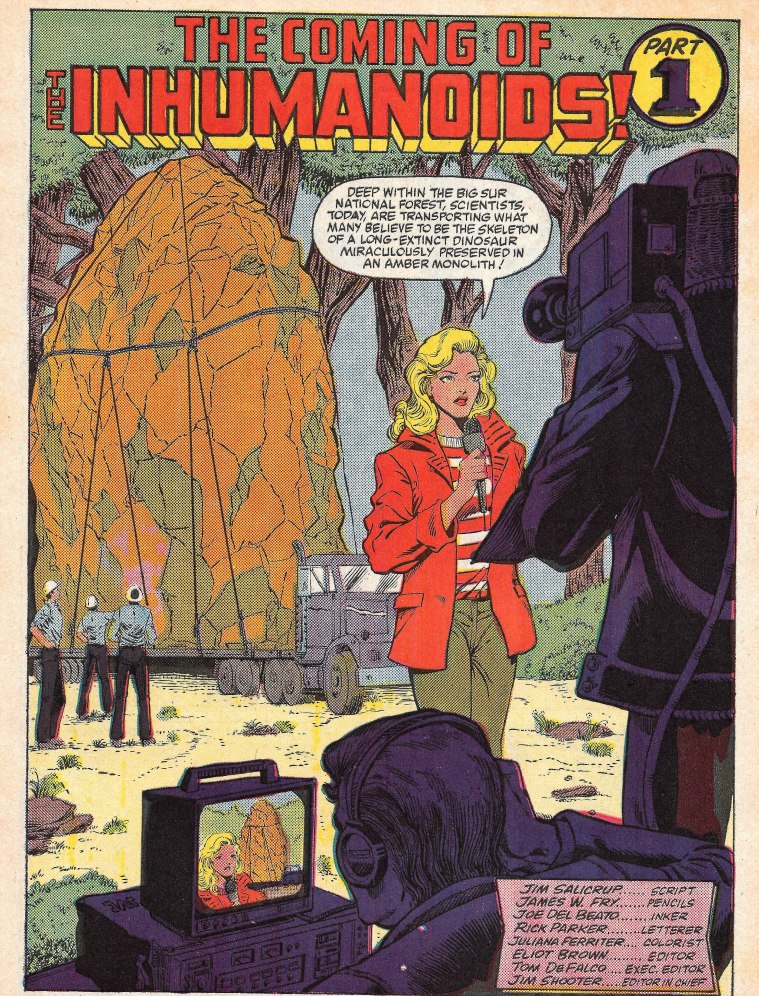 Getting it out of the forest is a chore, as the local flora keep dropping trees on the workers. 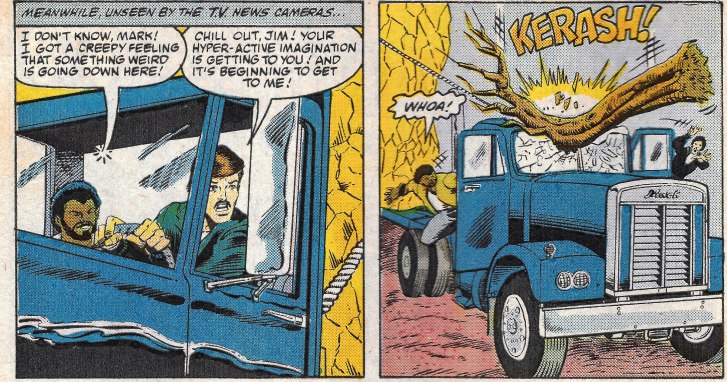 And if that isn't enough, the trees start making odd ghostly sounds. 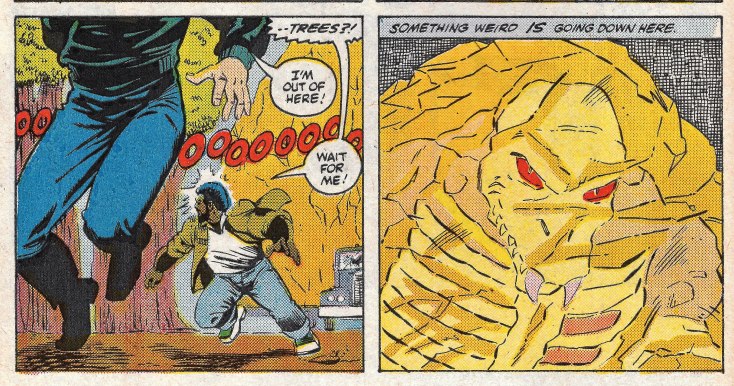 Which brings in the lead character of our team of Earth Corps scientists to investigate. 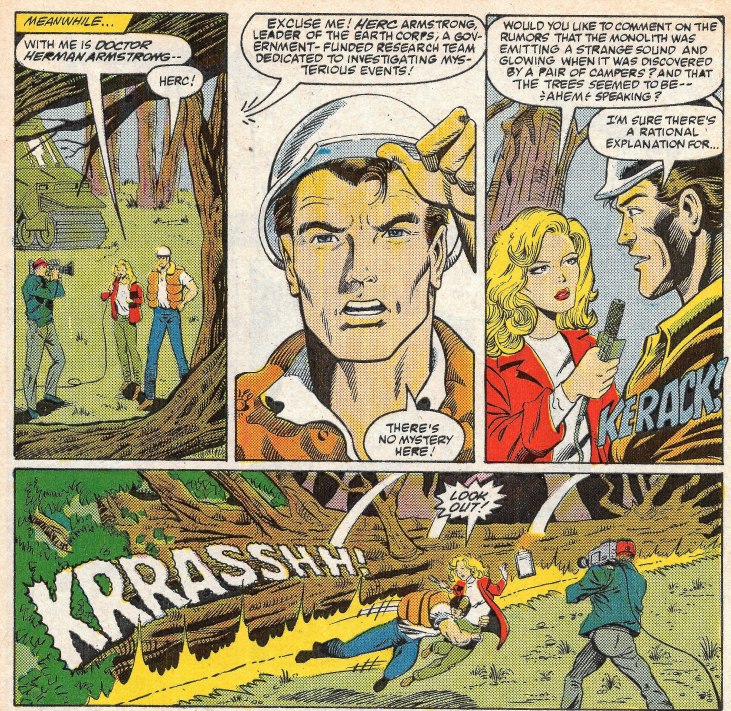 See what I mean about the forest actively working against the people trying to remove the giant booger? Maybe take that as a sign and put that crap back, guys. Whatever could it be causing this? Well the name on the box doesn't say "Inhumanoids" and not mean it. Appears the thing in the amber is evil and there are good forest Inhumanoids working to keep it from leaving. Of course, THAT isn't explained this issue. We just get this one goofy panel of a tree with a face.

Reading this issue before the plot synopsis from Wiki leads to a lotta WTF. Salicrup could have given us a bit more info via dialog box of what exactly we are looking at here. Nope though, we just get a single shot of Treebeard there with no explanation nor even voice over conjecture.


What we get instead is we move on to this power-mad industrialist who is commanding his loyal workers to "drill baby, drill" like he is the 80's version of Sarah Palin. His workers do, which of course ends in a giant cave in and the release of this creature, a sort of plant thing called Tendril that is supposed to evoke Cthulhu-ish comparisons. 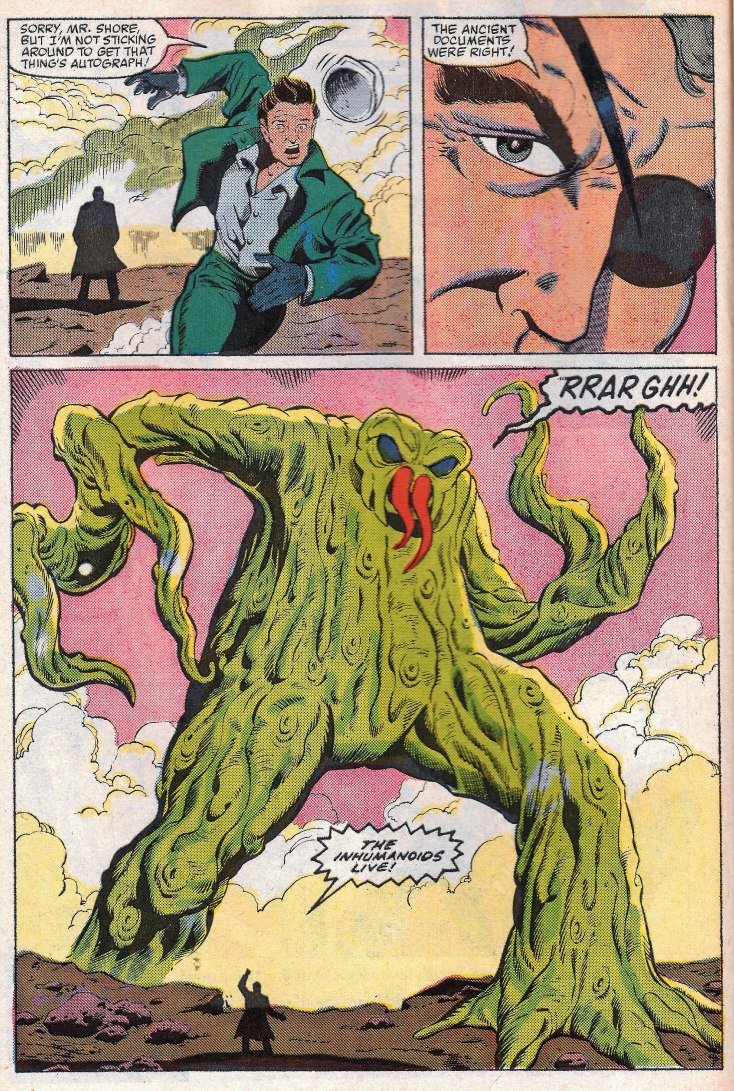 You might ask where are our heroes during all this? Why they are having a big party hosted by Sandra Shore for the Shore Museum to show off their giant snot wad. A party which dear old SoC here can't figure out the dress code. I mean take a look at Herc here in his resplendent tux. 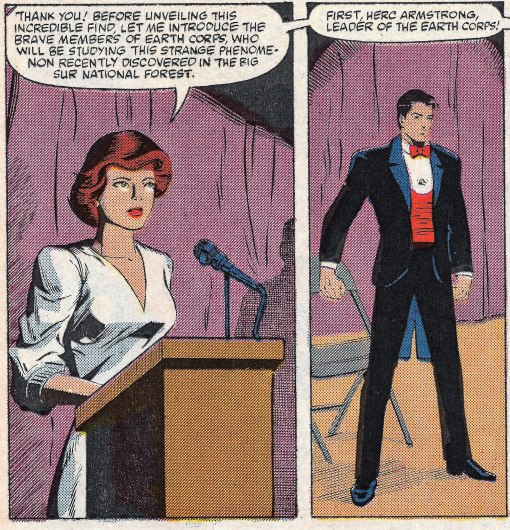 …which I will admit seems a little odd due to the red cummerbund and bow tie. Unless after the unveiling he's doing a magic act or something. However, I am really giving it the old "Spock eyebrow" when the next few people are introduced.

Okay, who did not notify Doctor Bright that this was a formal party? Or is it a semi-formal affair and Herc just loves to wear a tux? That can't be so, as we introduce the rest of Earth Corps including Eddie Augutter, looking totally causal in his no collar pullover and dinner jacket (very "Miami Vice" Eddie); and Jonathan M. Slattery, who picked up this little number from the circus trailer the clowns use. 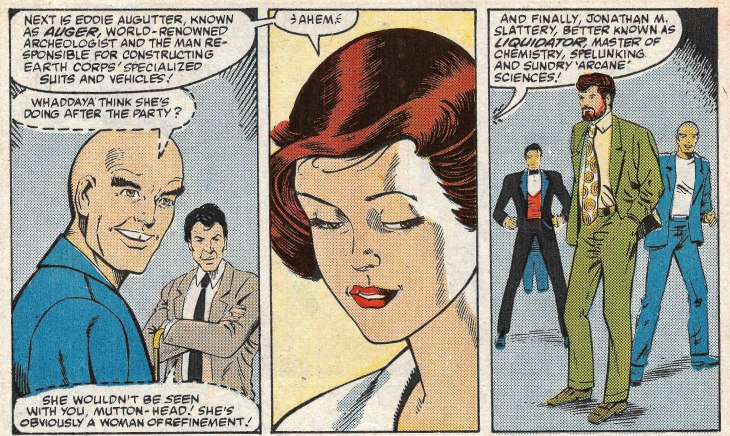 Since Sandra needs SOMETHING to distract the audience from the garish fashion disaster in the makings, she pulls the cord on the goo-ball, getting a bit more of a distraction than she bargained for. The yellow sludge is melting away, revealing this horrible monster thing called D'compose. 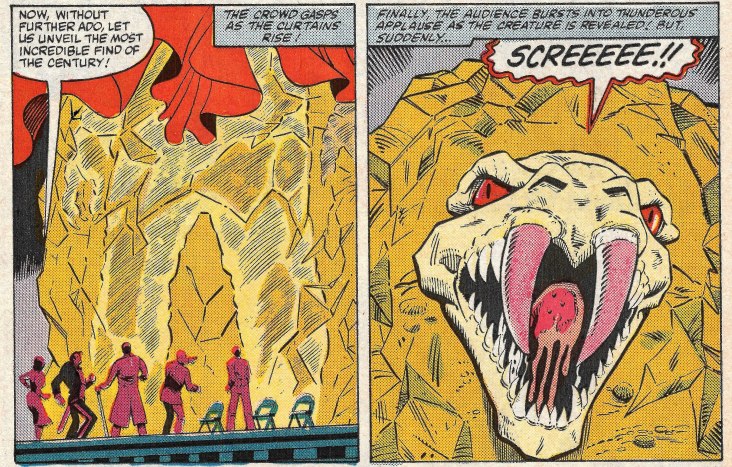 But if you think THAT is horrible, you haven't seen anything yet. LOOK at THIS!:

LOOK At this bunch of fashion fax pas! Two people wearing turtle-necks to a semi-formal event? A guy with his sweater tied around his neck like some college bo-hunk from a 70's Disney flick? A bun-headed librarian coming straight to the event from work? Some dude in a winter sweater and scarf ensemble?

And it only gets worse. I mean, semi-formal means NO pantsuits allowed, lady with the go-go chex neck scarf. And dude, where is your tie? Also RED is not a color formal tuxes come in. This book is so horrifying and we haven't even gotten to the gross out monster fight. I mean, seriously! WHO DRESSES YOU PEOPLE!


Well, whomever we have to blame will just have to wait as Tendril arrives to attack the guests at the party and cause a bit of mayhem. I'm all for throwing him those guys without collared shirts, if you hear what I'm saying. 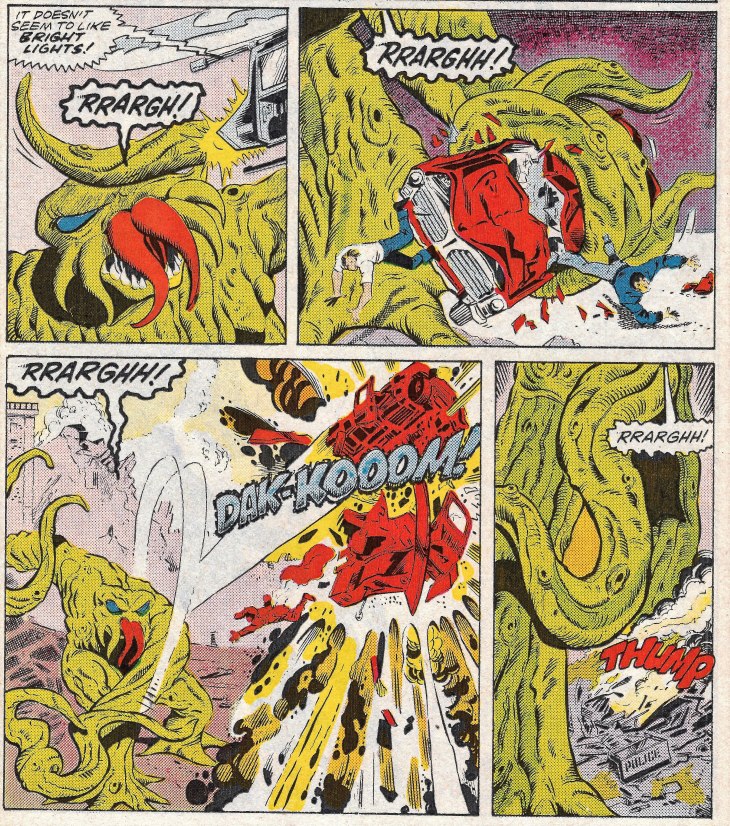 All of this has Herc and crew in a tizzy, so they rush off to get dressed in their official Earth Corp battle…er, SCIENTIFIC suits. They are these suits that they totally needed the government to fund that lets them do the same things as earthmoving equipment or missile launchers or toxic acid sprayers while still looking stylish. Basically they are a government pork barrel project that in no way should have been funded. But there you go: guys dressing in cosplay armor that really works is something worthy of taxable appropriations. 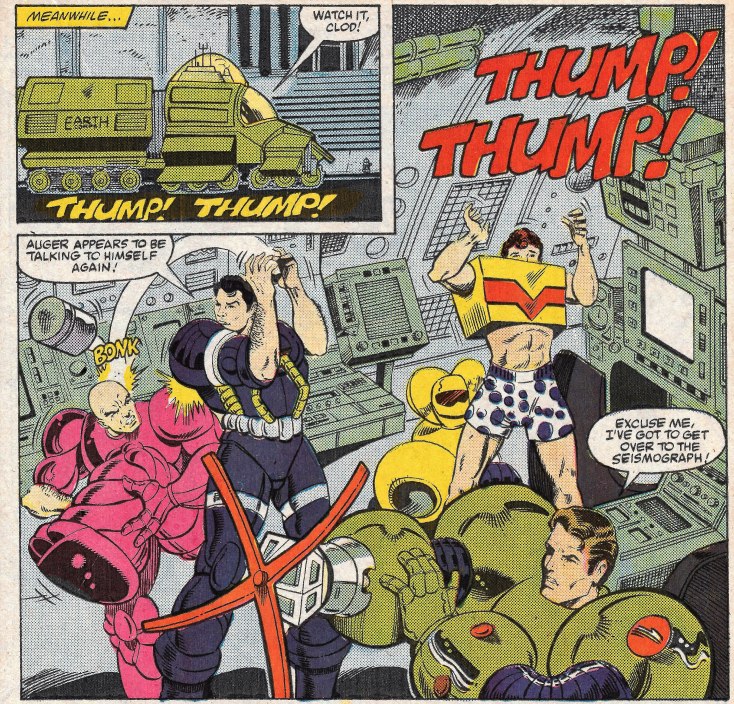 "Has anyone seen my eyeliner?"


Tendril is meanwhile having a blast destroying San Fran, and who could honestly blame him. Stupid cable-cars! 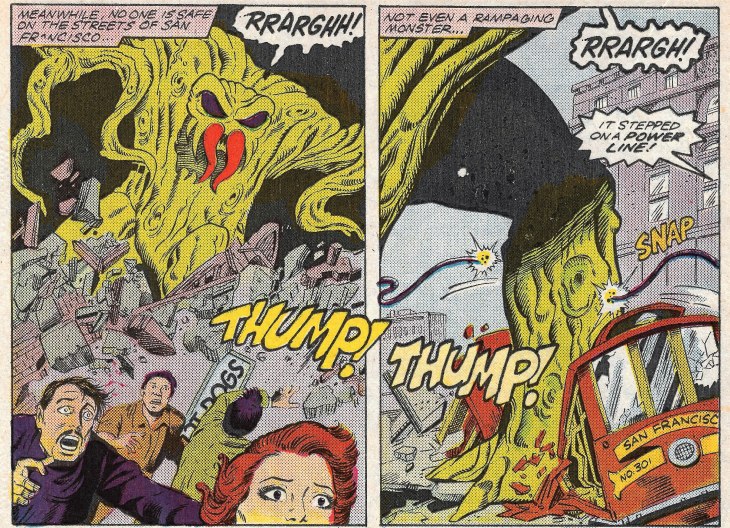 Once suited up, the guys spring into action. And by that I mean they pay no attention to what their leader Herc might have to say, but just decide to randomly do things. This doesn't work out so well. 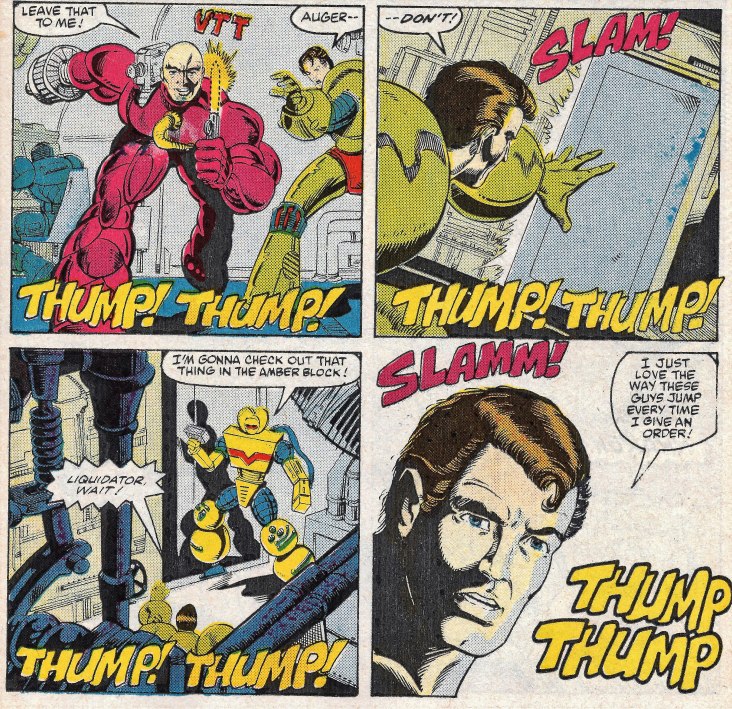 I love this exchange as the police are trying to stop Tendril. 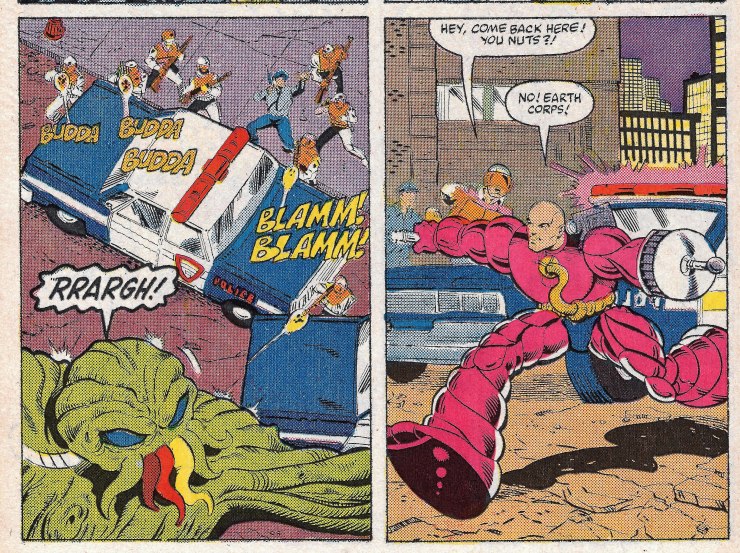 
"No! National Oceanic and Atmospheric Administration!"


I mean how else is a liberal arts major supposed to feel empowered in our society?


This is where we get our action part of the book, which is a couple of pages of stuff like this: 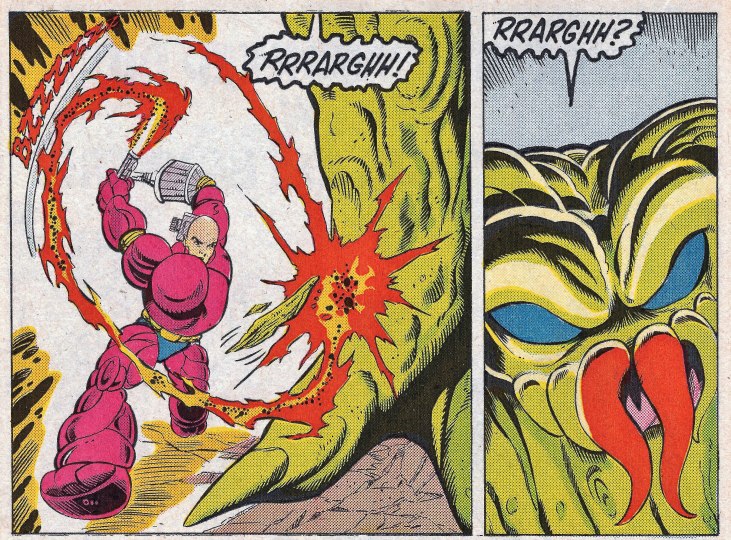 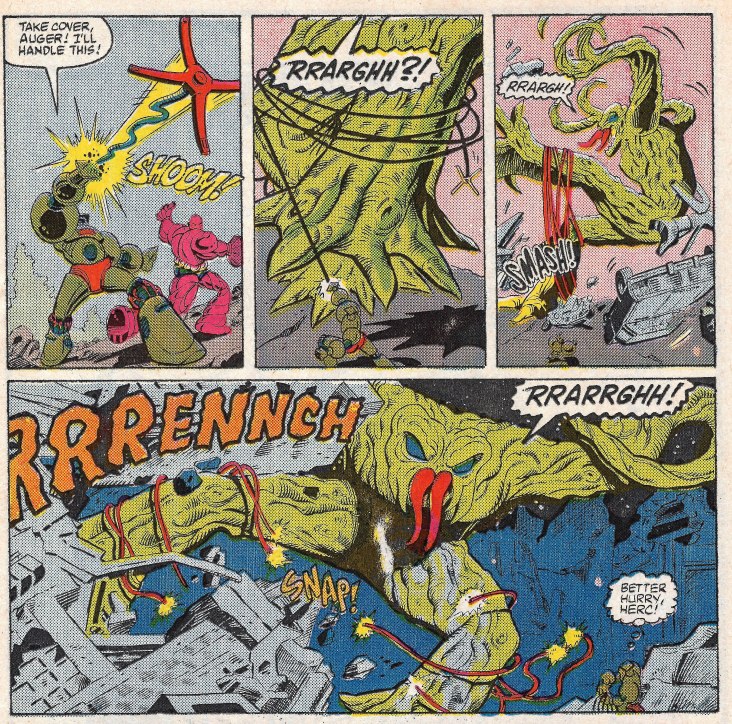 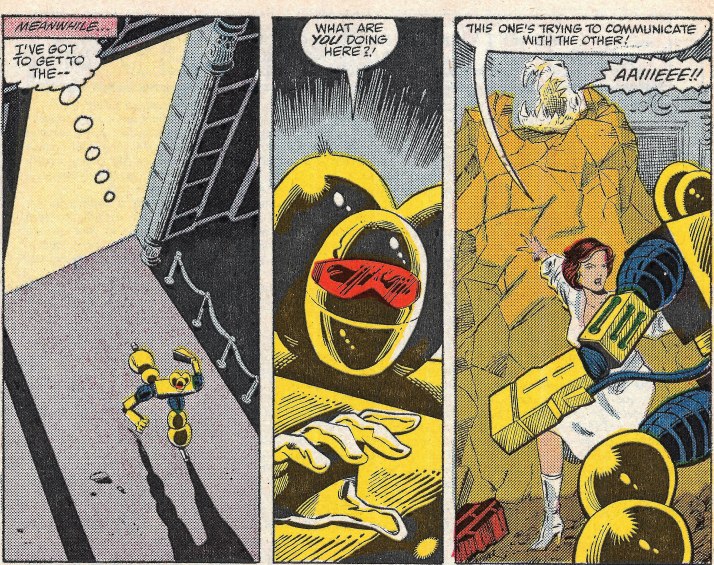 Whichever one that is, he saves her from a cave in as the two creatures start to REALLY converse. Sandra has been saved from being crushed by rocks one time at this point and in her mind that is one time too many. She wants to beat feet and says so. 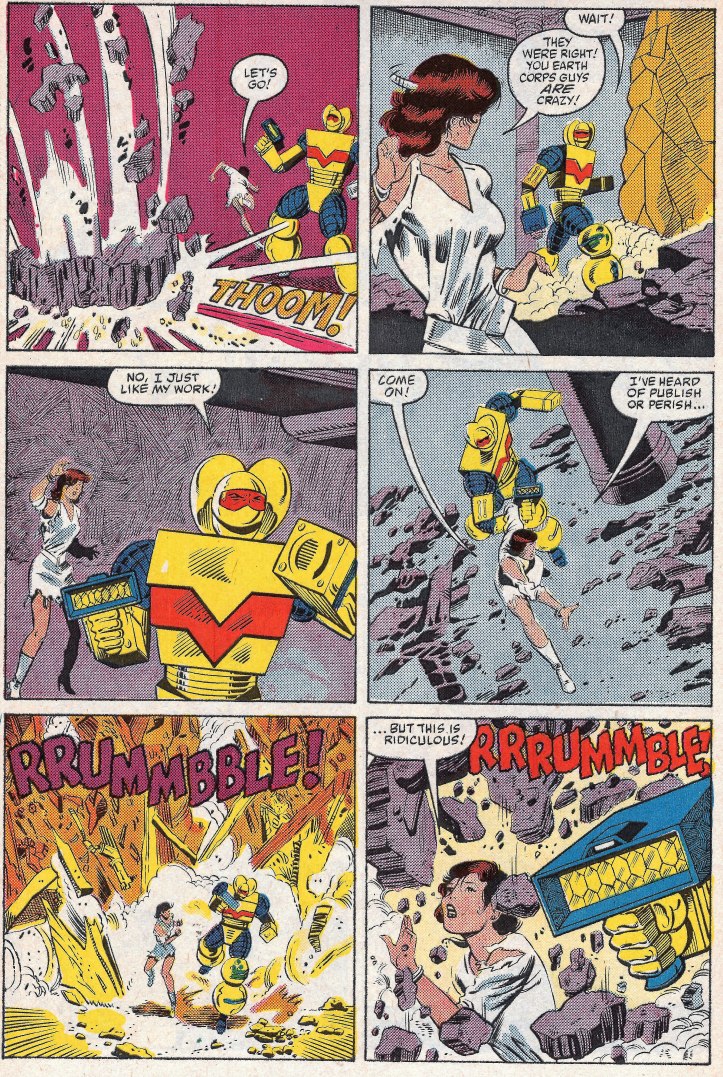 That is probably the warmest this book ever gets for me, up there in that second panel. It feels genuine where everything else feels like bad 70's TV show action drama. Anyway, Tendril gets his friend D'Compose out. 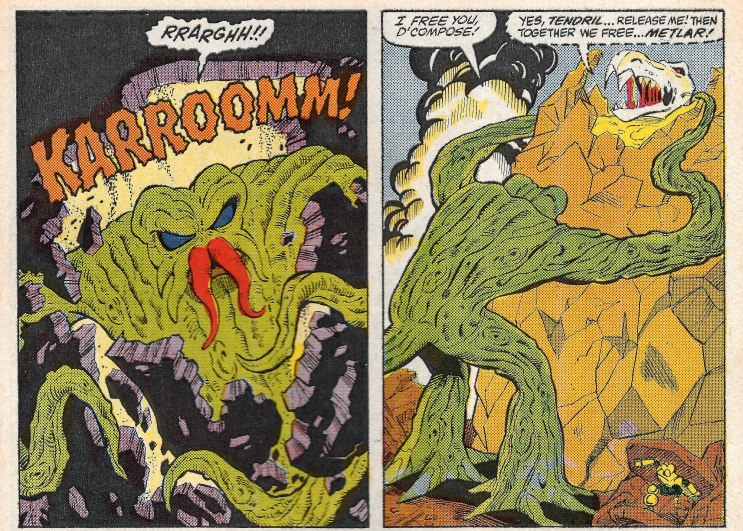 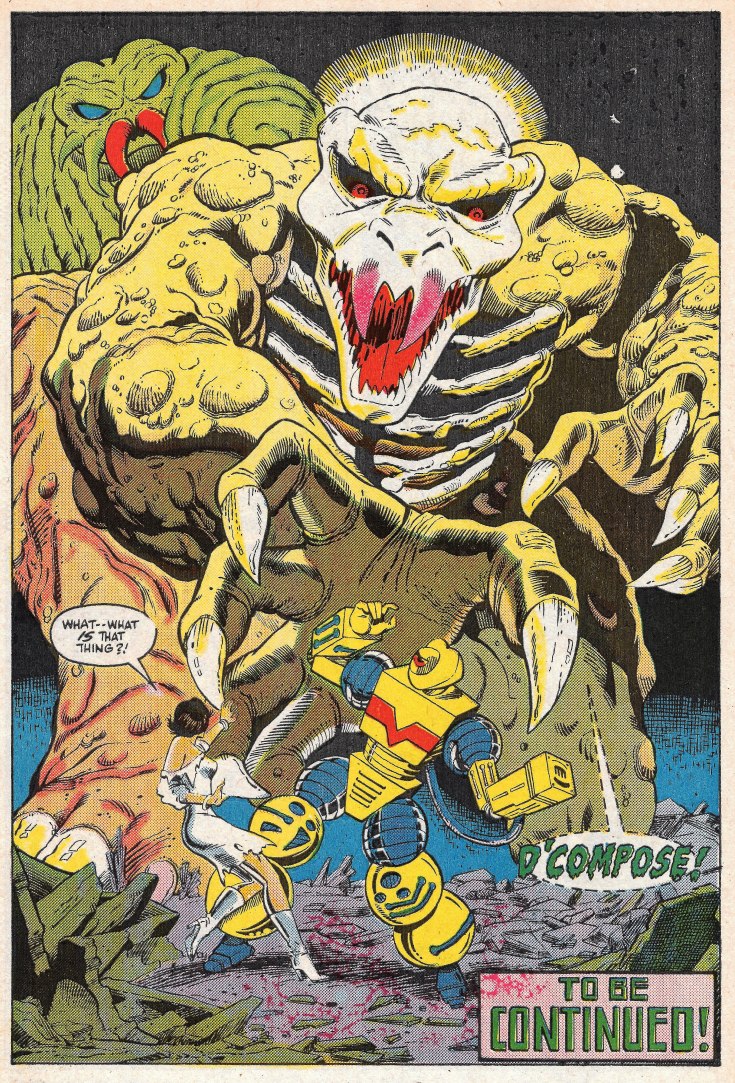 The story could use a lot of Mantlo, is where I'll go with this. It just doesn't stray enough from the animated TV show to give any life to the heroes. The villains are likewise one note. About the only thing decent is the art from Fry and Del Beato being up to 80's standards.


I wouldn't recommend these to any but the die-hard fan. Doing otherwise would be … inhuman.
Posted by SonOfCthulhu at 2:06 AM