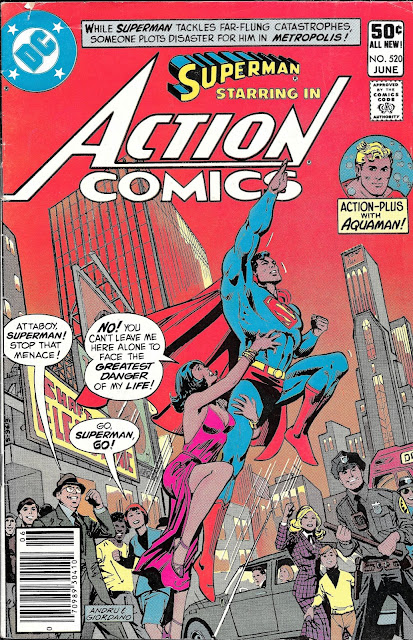 I think this probably happens to every attractive woman once.

If you ladies that read the crapbox,…all five of you, have ever had sexual "interactions" with a guy and then wondered why afterwards, you've been introduced to The Game. The Game is either a subtle form of intense coercion or a horrible gaslighting of a potential female victim, depending on how you look at it.

While the term "The Game" came about decades ago, it wasn't until recently that someone codified the rules of said Game into an easily digestible format. That person being author Neil Strauss and the book being "The Game: Penetrating the Secret Society of Pickup Artists." It was a sobering look at a hidden culture of scammers whose one goal was to score with a woman: said score being anything from a telephone number, a one night stand, or a trophy relationship that typically falls apart later.

The techniques Strauss both observed and used included sinister techniques such as discreetly undermining a woman's self-esteem by paying her a backhanded compliment, a maneuver known as "The Neg." The idea of treating women as objects to be won over by psychological manipulation instead of honest attempts at communication sounds misogynistic to me. I find the whole thing repugnant.

But then again, I'm just barely out there in this world of dating after my recent divorce. I may find that everything is The Game and I'm the only one not playing.

Whatever the outcome for me or Neil Strauss, what I CAN talk about is Lois Lane's introduction to game playing in this little tale from Action Comics # 520. 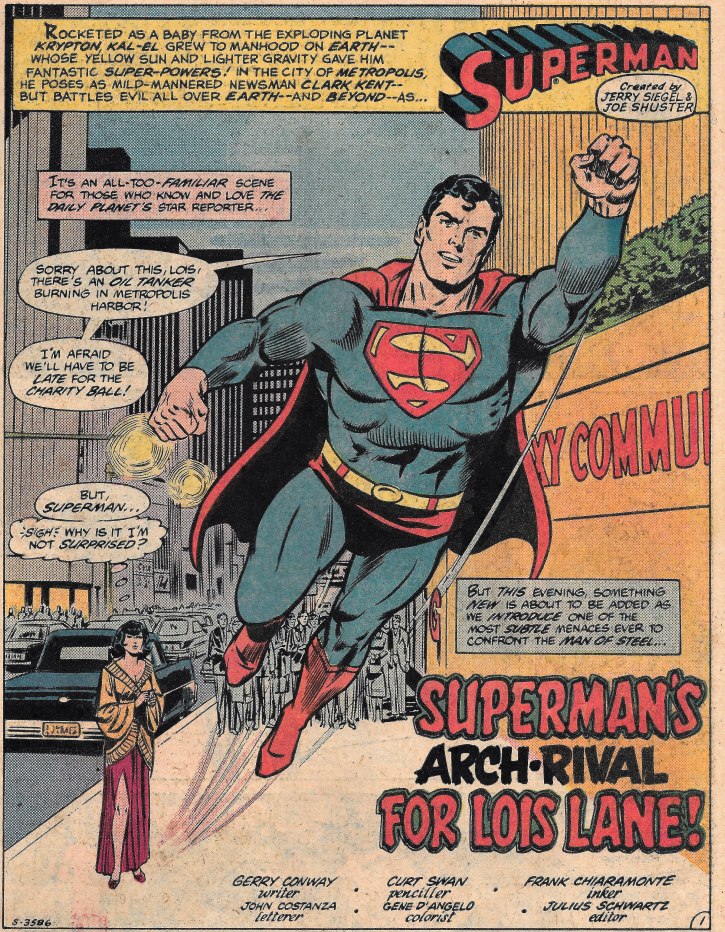 We begin with Superman being called away to stop a burning oil tanker in Metropolis harbor from exploding. Unfortunately this is occurring (as probably most disasters do for the man of steel) at the worst possible moment: right before the couple was to leave to attend a charity ball. Superman apologizes and flies off while Lois stews a bit. 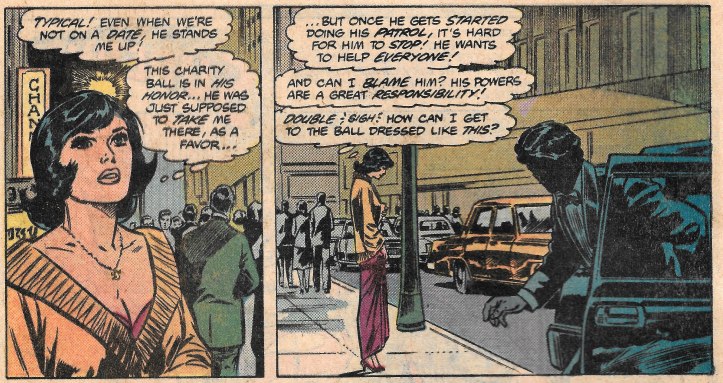 Is there a little bitterness in her tone? Maaaaaybe. And let that be lesson number one to all those guys out there in a relationship: always take care of your woman. Because if you don't… 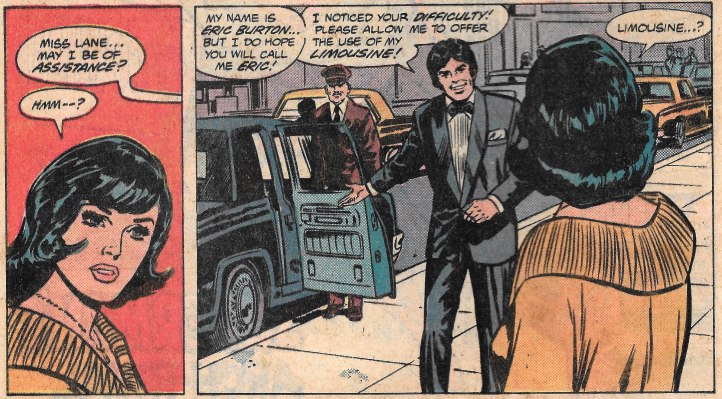 There is always another guy waiting to swoop in and take care of her for you. I give you Eric Burton, game player extraordinaire. He is a suave and capable guy with lots going for him and at the moment he appears to have his sights set on one thing and one thing only:

He begins by being a sweet, charitable guy who just happens by at the right moment to save Lois from the jam she's in. He's going to same charity ball that she and Superman are scheduled to attend.

So what does he do? First he offers her a ride… 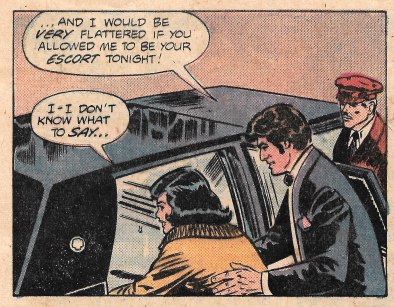 …then he makes sure they are on a comfortable, familiar basis of interaction… 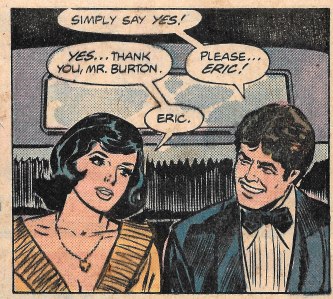 …and then he aligns her goals with his own.

Yeah, I kinda hate the guy already. That's Superman's girlfriend you're hitting on there, mack. You better step off before he steps you off! Plus there's something about this guy that just oozes manipulative sleaze. 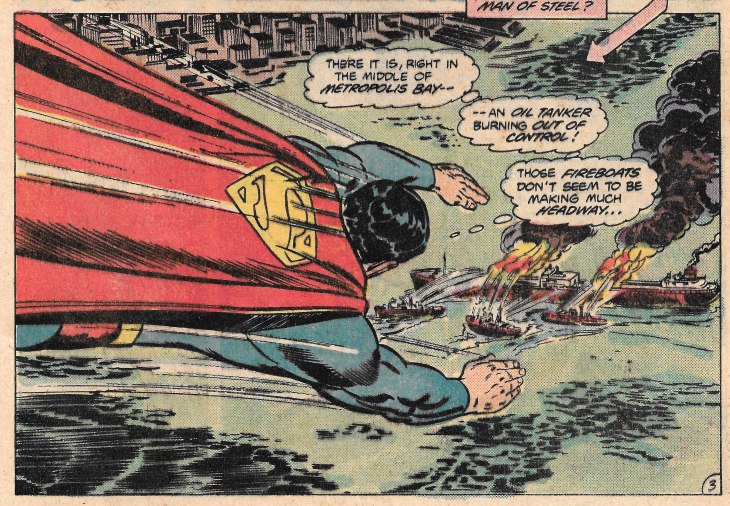 Meanwhile, Supes is rushing to save the blazing oil tanker. Note he states he heard about the fire from a radio station broadcast. More on that in just a bit. 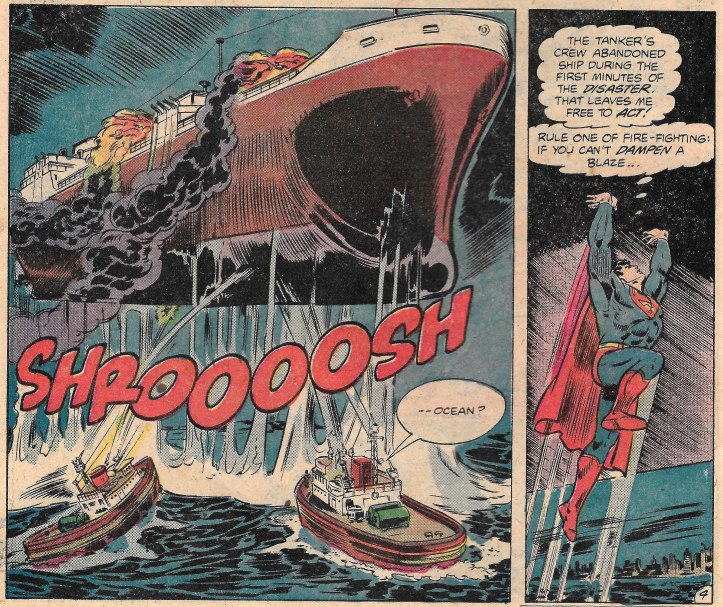 But first a dash of super-strength, flight and the careful application of an environment with no oxygen…

…puts out the blaze completely.

However when he returns to pick up Lois, he finds she's left without him. Poor Supes! If only he knew what she was up to while he's been out saving the world. And note again, he's thankful that he heard about the blaze from that radio broadcast. 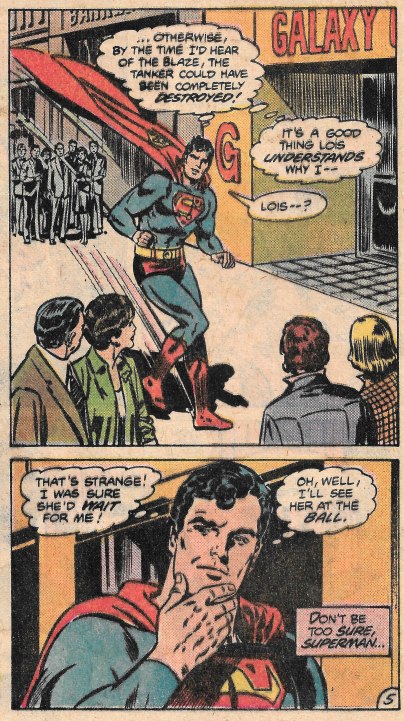 And in the meantime, Lois is two-timing it with this totally crushable Eric Burton. He even dances like a pro. (*sticks finger down throat and gags self*). Sorry but to me this guy seems too good to be true. I'm telling you people now, don't doubt my powers of precognition. 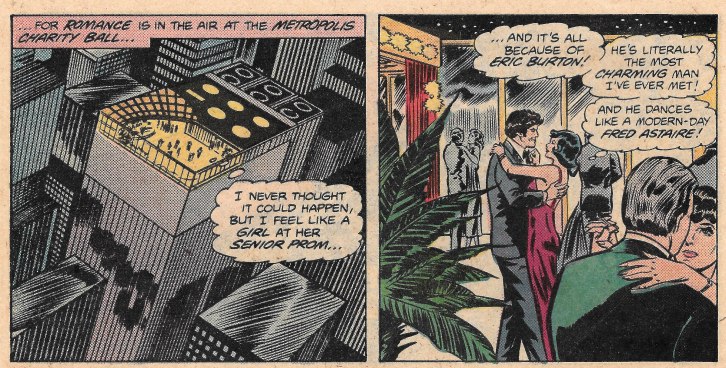 She's even got the old busy-bodies noticing. Hey! Blue Hairs! Mind your own bee's-wax! 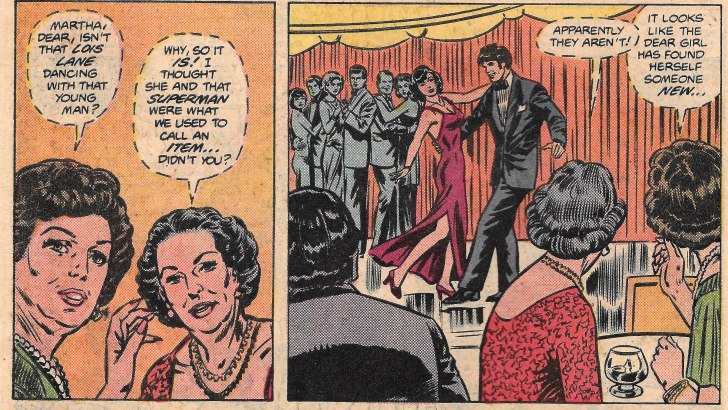 Eric now subtly tries to get Lois drunk (so he can take advantage of her) but she's having none of it.

And while Eric gets drinks, Lois has a brief chat with Perry about her prospective suitor. 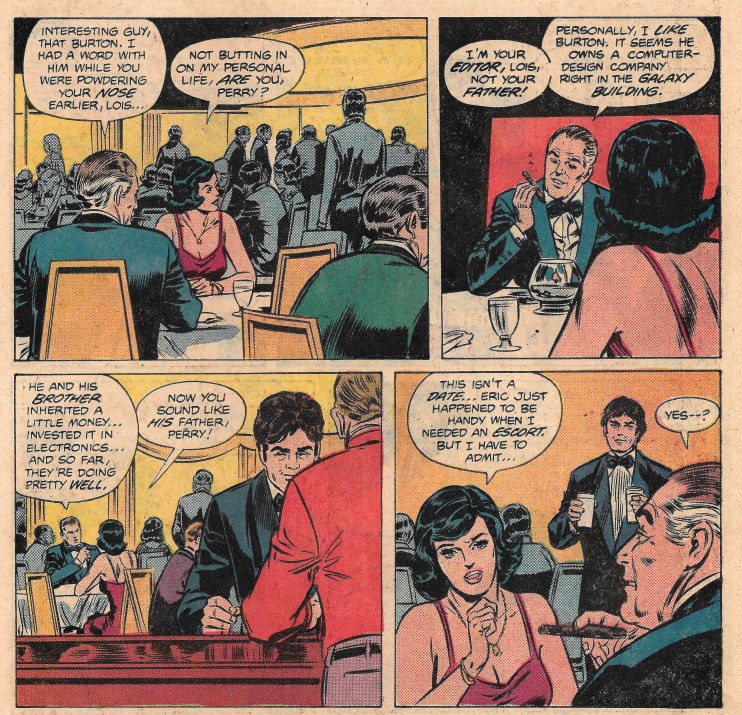 Perry gives the guy high marks, noting that he owns a software development company. Lois appears to almost drop a hint that she is interested, which let's be clear, makes her possibly the most fickle female I've met. Superman has been away for a period of an hour during ONE disaster and she suddenly is falling for another man? I mean if you don't want to be Superman's girlfriend fine, but at least make the decision after weeks of thought and not on the basis of there suddenly being another guy in the picture. 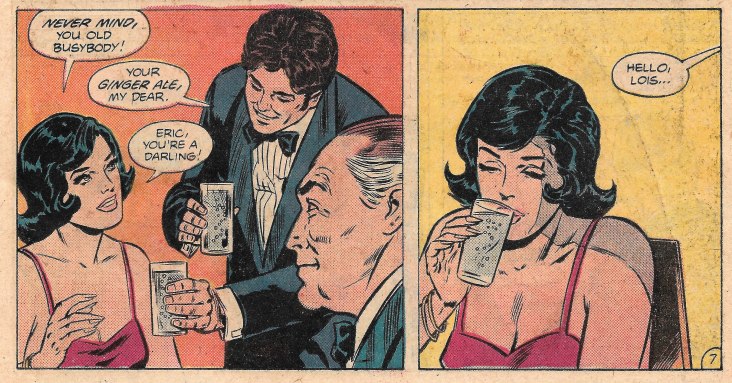 Eric shows back up though and whatever revelation Lois had in mind is cut short. As is her actually taking a sip of that drink. 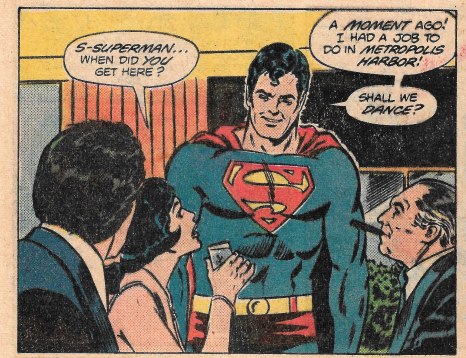 So now what do you do Lois? 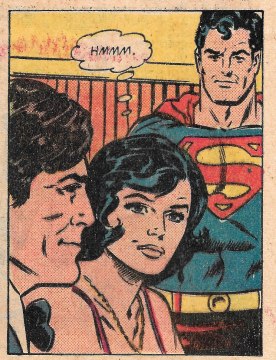 and acts a complete and entire bitch.

The man just saved lives and property damage, BUT it was more important to get you to the charity gala on time. And because of this slight, you are going to make him pay by brushing him off for some dark-haired Don Juan in a dinner jacket? That's pretty self-centered, if you ask me.

Superman gets some good advice from Perry, who thinks Lois is just toying with Superman's affections a little. But before the man of steel can implement any attempt at swooping in on Eric's dance... 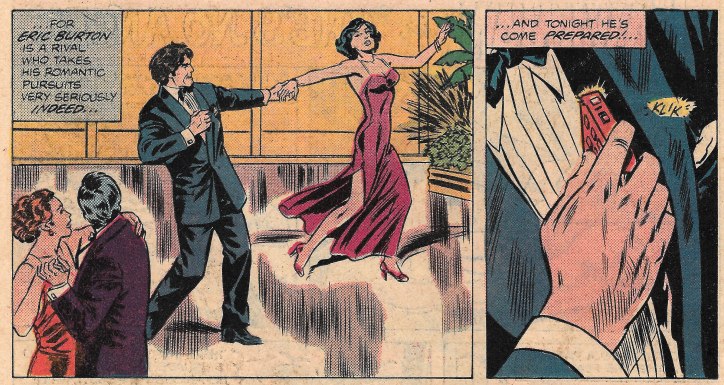 Eric implements a device of his own. A secret scheme that will make this game a difficult one for the Superman. At the touch of a button… 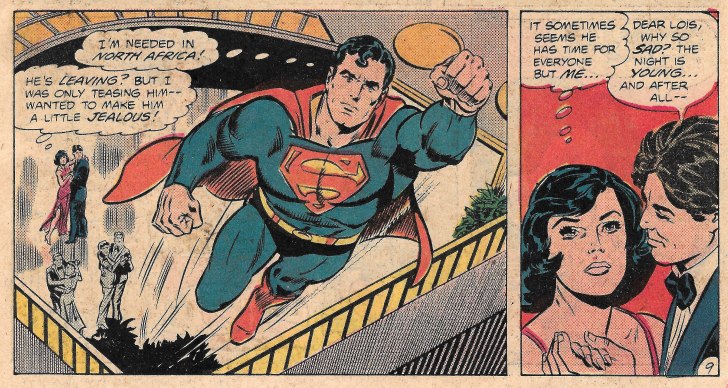 …causing Superman to rush to the rescue and leaving Lois to question both her motives and Superman's commitment to their relationship.

So much so that she falls into Eric's arms at such a rapid pace that I find myself questioning the validity of this tale. Sure Superman would be a tough man to date, always rushing off saving people, but that, for lack of a better term, is his JOB. He has Responsibilities. And in meeting those responsibilities, he sometimes isn't there when he would really like to be.

Lois seems pretty shallow here. Superman has saved her every single time she's been in trouble, yet here she is casting him aside for the first oily bo-hunk that crawls out of the woodwork. Not very classy, Ms. Lane.

Also of note is whatever Eric used to hook into that broadcast transmission, also appears to have made the radio it was broadcast FROM appear. I'm gonna go with one Eric's employees was also at the party and they brought the boom-box sized radio. Stuffed in the coat sleeve of their tuxedo shirt. Or underneath their cocktail dress. Or something. (this is never explained in the book, btw)

Meanwhile Supes faces the mother of all sandstorms, something that has me wondering if Eric somehow created it. 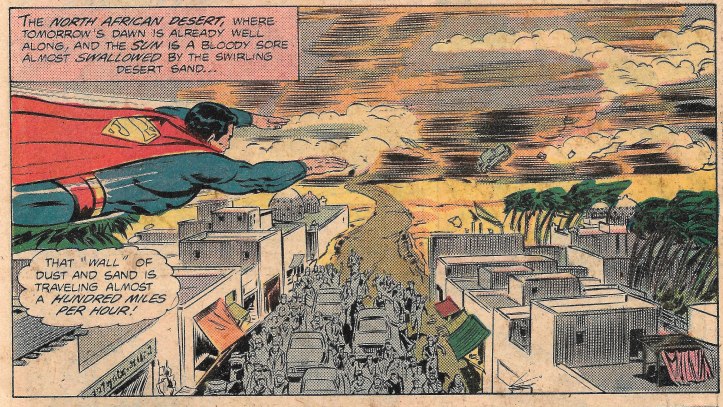 Whatever the cause, it takes all of Superman's effort to stop it.

I never called Supes "Action Ace". Never. Not once.

And then the book does something VERY unexpected: it takes a very realistic approach to what thought processes Superman has to go through in balancing his personal and superhero life. It is frank and sobering to hear that even though he is Super he is also very much a Man. And that part of him needs to be considered as well. I'm shocked to see this question framed in the story in such a manner as to have a sort of resonance. 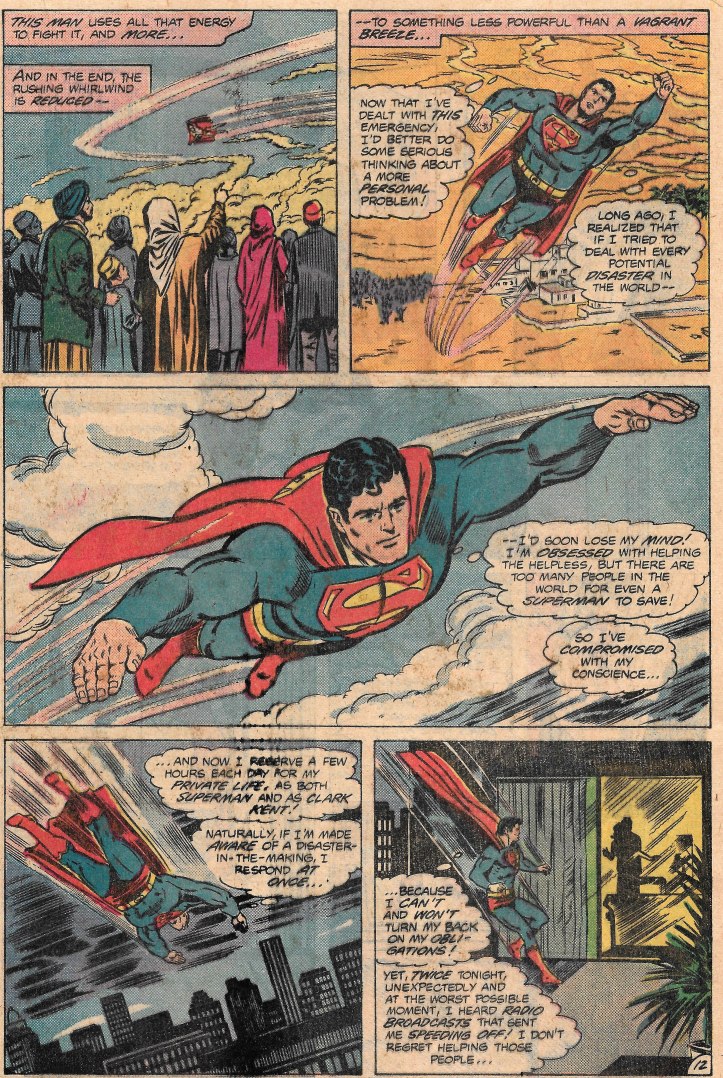 Who among us doesn't have to juggle personal and professional obligations to the detriment of our romantic entanglements? Even true soulmates sometimes have to deal with years of longing and separation as situations to be together do not always present themselves. Good job, Gerry Conway. This was worth the price of admission.

Next Superman does something awfully creepy though. It is taking liberties if he just walked into her apartment. I mean, already he can see through her apartment walls anytime he wishes, but just strolling in anytime he wishes is unacceptable no matter who the person is. Including Superman. 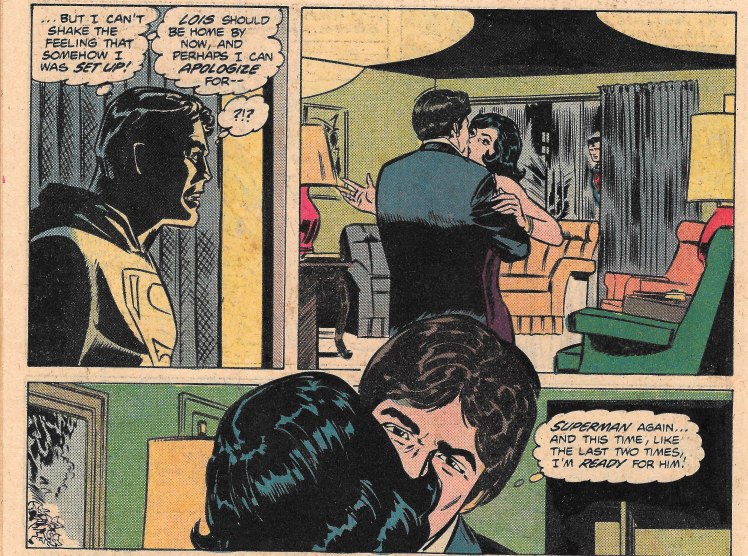 Because Superman is caught peeping by Eric, the crafty cuddler uses his device again… 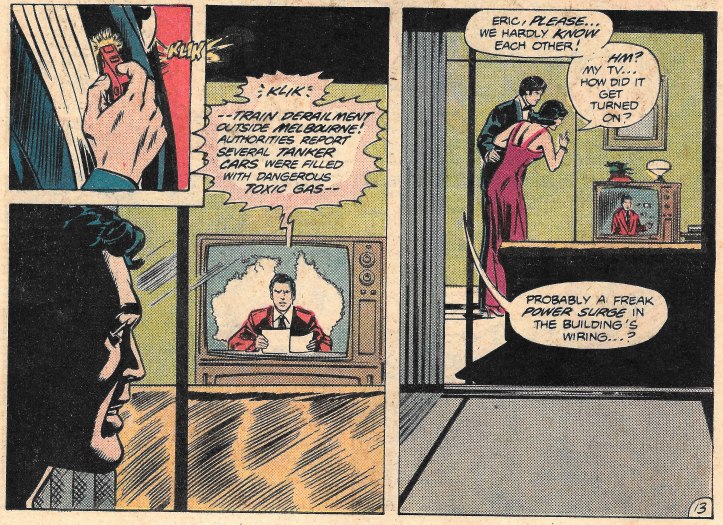 And the TV pops on to the worst disaster it can find, forcing the man of steel's hand yet again. Which is probably for the best given that if he HAD walked in on them like this, Lois could have legitimately said pretty much anything she wanted in the way of dressing him down for eavesdropping.

Lois is a bit freaked out by the TV coming on all on its own. Seems like they didn't have remote controls back then. Perhaps Eric is the person who invents them in the DC universe. Who knows?

What we do know is that Erick is shown as a creep in the way that all villains are shown as creeps: by taking on traits or habits that are socially looked down upon.

And being a klutz… 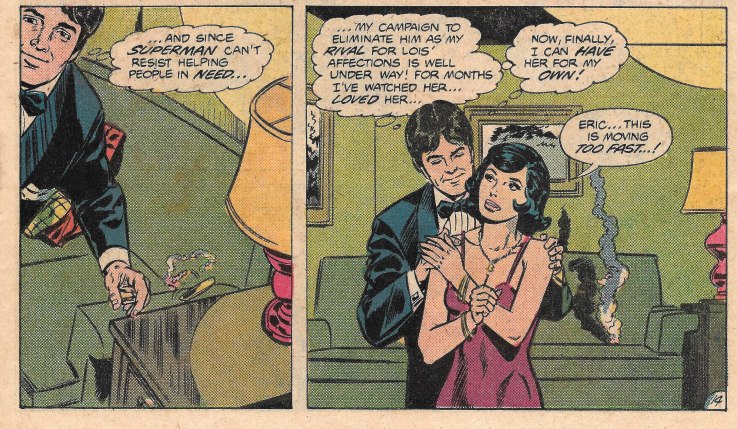 And pretty much being so self absorbed that he is oblivious to everything going on around him.

Seriously, if you read his thought bubbles, he's kind of a conniving snake and an overly obsessive asshole, but not really a completely irredeemable one. At least not yet. 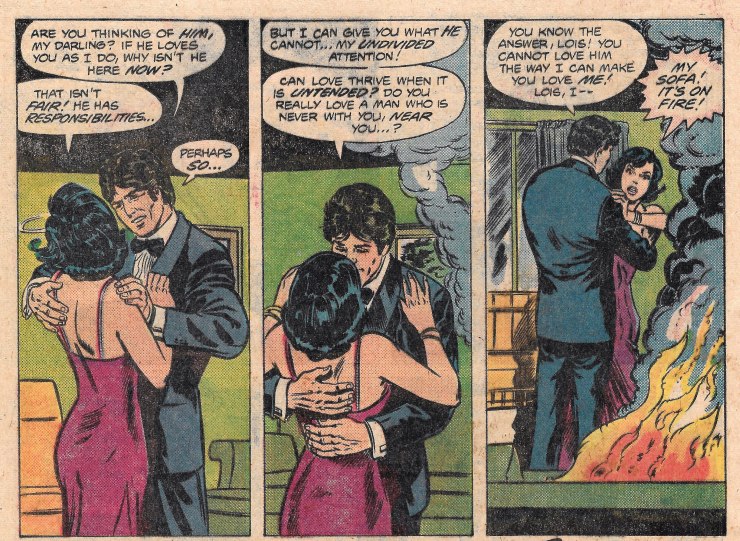 Suave guy! I've never tried the dating technique of catching a girl's apartment on fire…oh, wait. There was that one time… 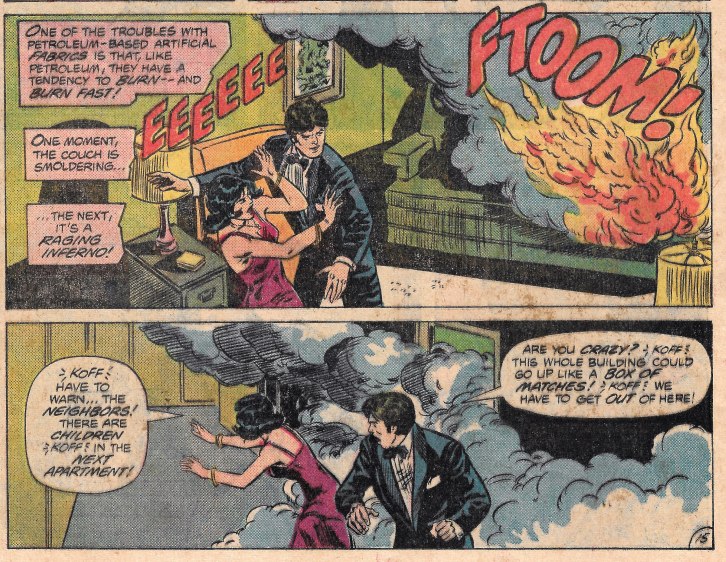 At least I acquitted myself better than this guy, who quickly goes from debonair lady's man to self-centered jerk. 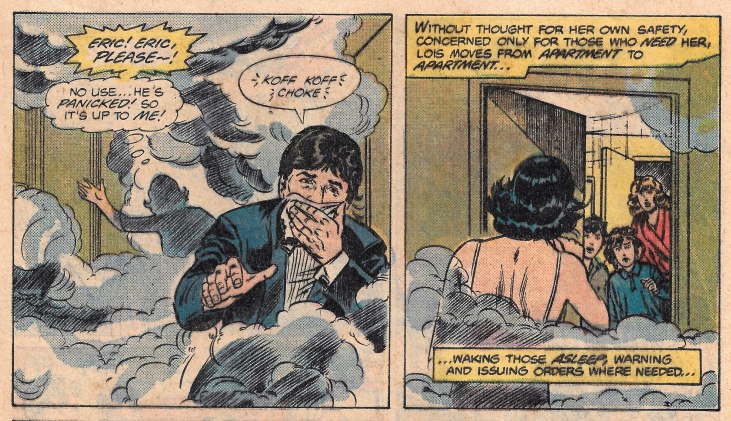 While he's cowering in fear and looking for an exit, Lois is doing the human thing, the caring about people thing, the Totally Superman's Better Half thing… 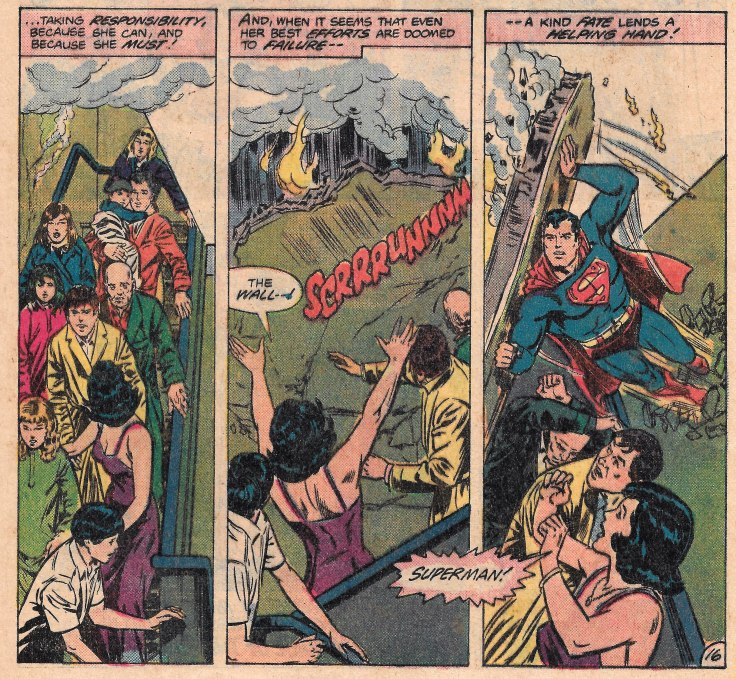 …suddenly she and everyone she is saving is about to be killed by falling debris...and Lois should feel a bit lucky that Superman doesn't hold a grudge. If he had decided to NOT check back in on her…Let's just say she'd be just plain flat instead of being flattered.

But it all works out in the end. Eric is humbled and humiliated, having to have been saved from his own misguided machinations. 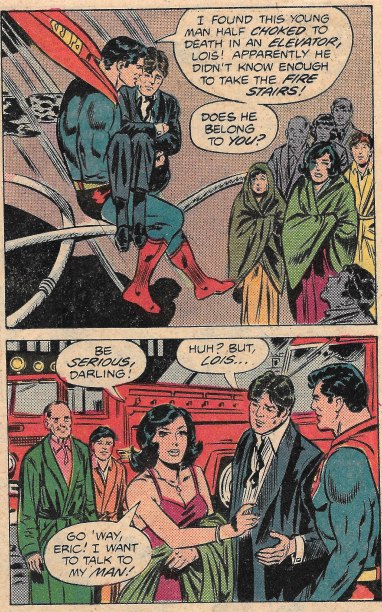 Lois realizes that not just anyone can replace the man in her life. And Superman gets a kiss. 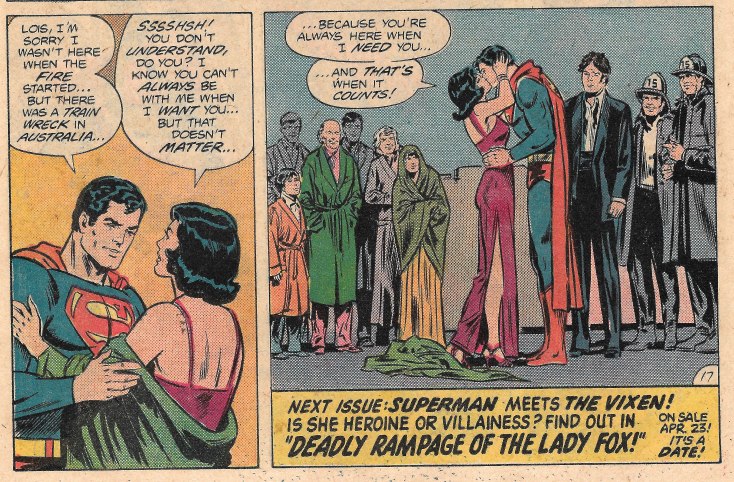 Note: Lois and all these people now have no homes since their apartments were burned to a crisp.

Posted by SonOfCthulhu at 2:23 AM