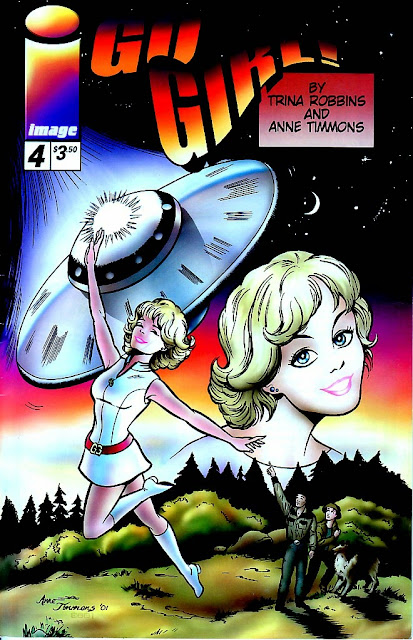 Go Girl! was published in 2000 and lasted a scant five issues under the Image banner. Before it faded from view, it caught the attention of Dark Horse who republished all the stories in one trade in 2002. The trade was so successful that two other trades of unreleased work were produced; Go Girl! The Time Team in 2004 and Go Girl! Robots Gone Wild in 2006.

Go Girl! is the fruit of artist Anne Timmons and writer Trina Robbins. Trina is something of a comic book legend. Her nine non-fiction books have documented the women’s movement in comics as well as how women are presented in comics. In books like From Girls to Grrrls, which covers the early inclusion of female comics in the male dominated comic book industry, she shows both her encyclopedic knowledge of the business as well as her own personal opinions of it. And comics is an industry Trina ought to know well. She has been an active part of it since before I was born (well, maybe just by a little bit). She edited the first ever all woman comic book titled It Ain’t Me Babe in 1970. Trina has involved herself in promoting a decidedly female presence in comic book industry and is herself a skilled artist and writer. Heck, here’s a fact that even Wertham should be impressed with: Trina designed the original Vampirella costume for Forrest Ackerman and Jim Warren. HERE’s a link to her site.

So what do I make of Go Girl!? The book is an odd blend of kitschy old-school storytelling in a modern setting, a strange combination that makes certain scenes unintentionally funny. Our tale follows Lindsay Goldman, the daughter of the original 1970’s superheroine Go-Go Girl. Lindsay inherited the power of flight from dear old Mom and now she fights evil as Go Girl. That’s almost right. Take out the “fights evil” part and replace it with “is present when mysteries solve themselves” and you might get a more accurate picture. We start this tale called “Summer fun, some’re not” with Lindsey and Mom going away to a dude ranch. Lindsay takes time to say goodbye to her friend, Haseena. 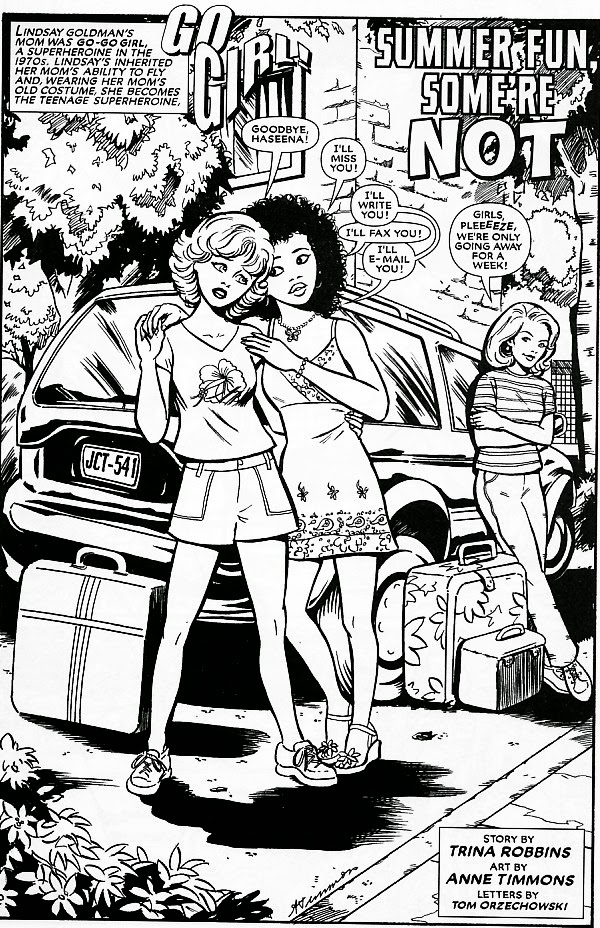 Neither Lindsay or Haseena are lesbians, but this panel makes them appear more clingy than week-old lovebirds. Then the next page makes an unintentional poke at Lindsay’s powers. 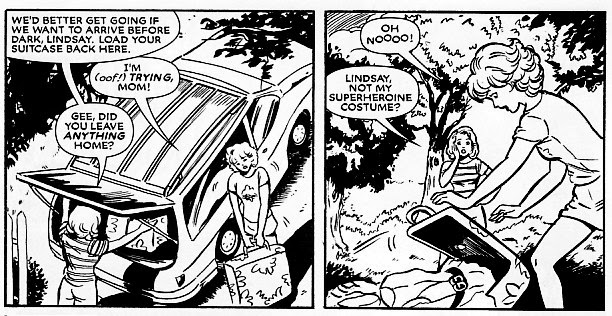 So wait, she can fly but she’s not super-strong or anything? Heck she doesn’t even appear to have the strength of a normal 15 year-old. Most girls that age CAN carry a suitcase without breaking it open every five steps.

Notice that the art has an almost genuine golden age feel to it. It’s like a comic book “Leave It To Beaver” with modern references. 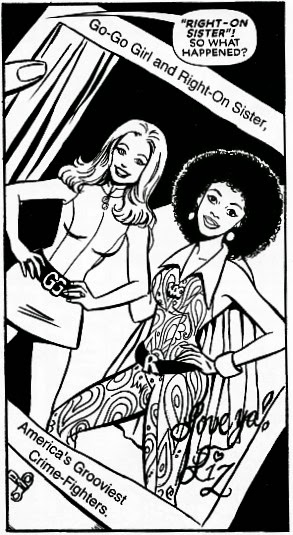 Lindsay’s Mom fills the young Go Girl in on why they are headed out to the dude ranch. It seems that it’s run by an friend of hers from her superheroing days, Liz a/k/a Right-On Sister. Liz and Go-Go Girl haven’t seen each other since before Lindsay was born. Her Mom split up the team to get married. Liz is also hiding something from our Mother-Daughter pair, but more on that later. First meet Liz. 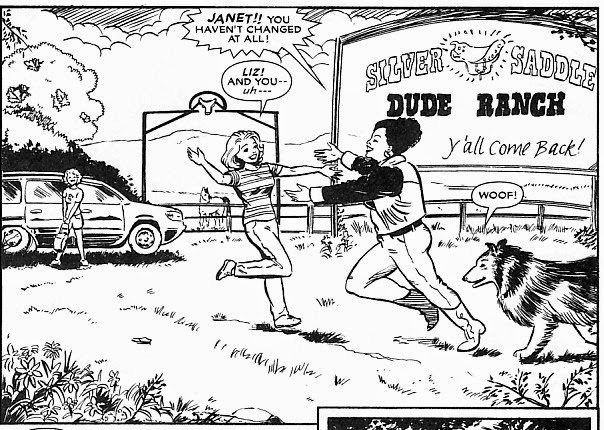 WOAH! She’s Oprahed out! That’s not what she’s hiding by the way, it’s just an observation. Liz blames her weight gain on her cooking because she “just loves her own baking.” After this next panel, I’m inclined to agree.

Note that’s suppose to be a pecan pie. With what appears to be a flakey crust on top. Who the heck makes a pecan pie like that? And you don't usually a la mode pecan pie. I think anybody could gain a few pounds eating Liz’s baking if her recipes call for adding extra carbohydrates to already fattening desserts. As we’ll see, all these desserts are just a way to beef up her guests so she can snack on them as well. Ree-hee-hee! 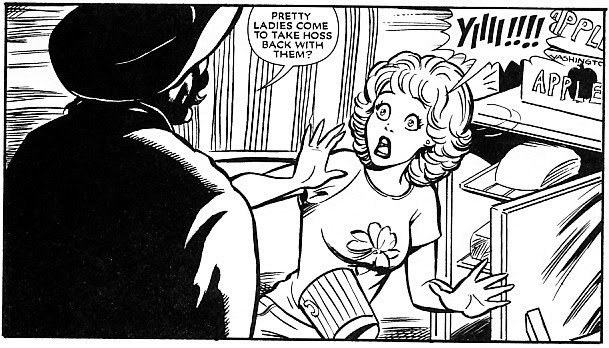 Not only has Liz developed a taste for human flesh, she also has an evil henchman a’la Manos, the Hand of Fate. Here he is trying to sneak up on Go Girl as she gets ice cream for her pie. Of course he is foiled by her skilled ninja training. 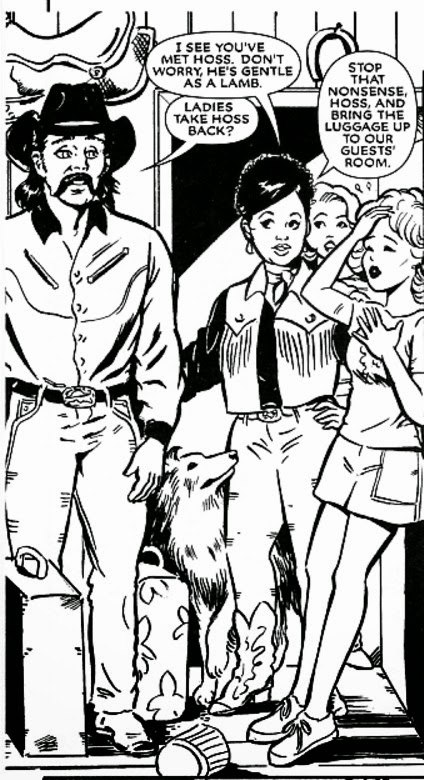 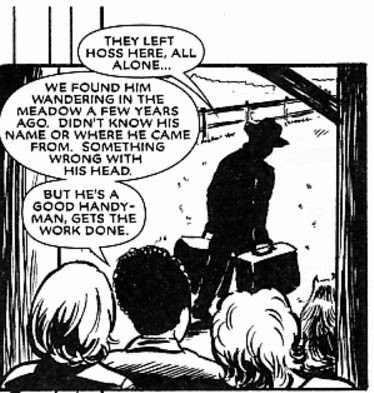 Hoss “gets the work done”. I’m sure he does, Liz. I’m sure he does. How far do we have to look before we find that secret room where you hide the leather ass-less chaps you make him wear when guests aren’t around? Enough of my baseless accusations and back to Liz feeding the pair enough pie to keep them from getting airborne for weeks. 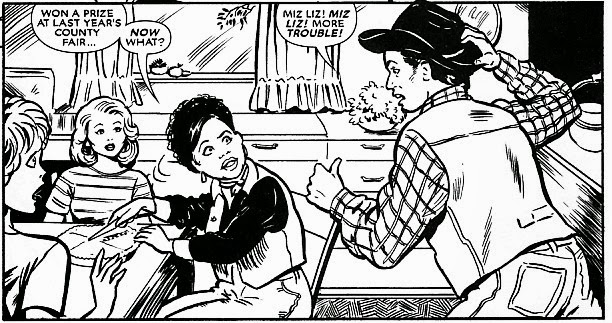 The ranch hand explains that three more head of cattle have gone missing overnight. And not only that, but their bodies are missing along with their heads. *pauses for effect* It’s at this point that Liz comes clean to Lindsay and her Mom. 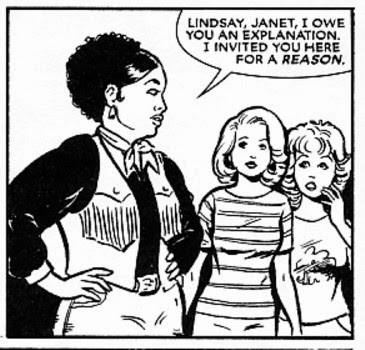 That’s right, she’s fattening you up with pie to replace those three cows she just lost. Ok, so really she wants your help in finding her cows. Or at least that’s what she’s telling you…

That night, Lindsay decides to take a brief fly around the farm. Any young farm boys out on a clear night like this would get some excellent upskirt views of Lindsay’s flyover. Maybe a miniskirt isn’t the best outfit to go flying in? 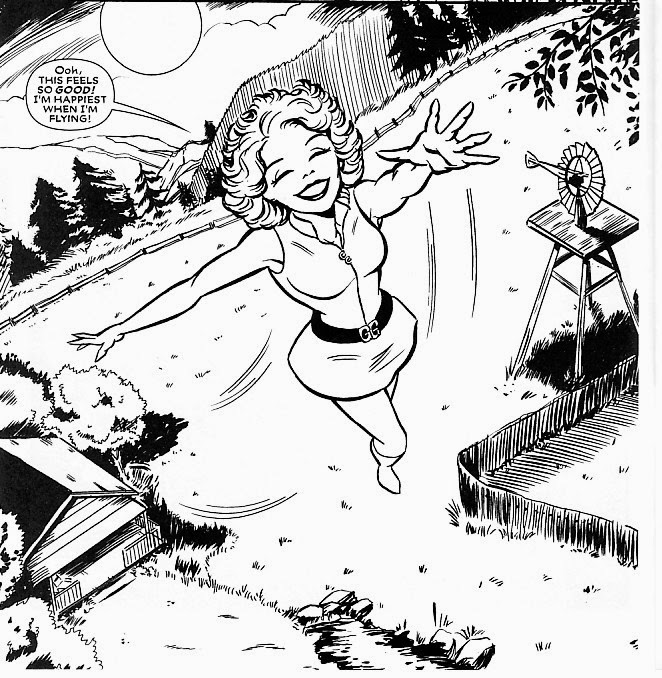 The only person who would see her bloomers is Hoss, who is out for his nightly bit of craziness. 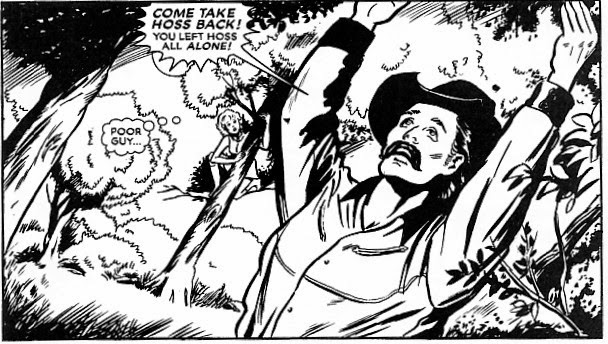 He seriously does not like having sex with Liz. The next day is a day of discovery for Lindsay and her Mom. Lindsay finds a strange radio and evidence of tire tracks leading away from the spot where the cattle graze. Lindsay’s mom makes a discovery too.

Hansel and Gretal warning bells should be going off by now. It would be funny if Liz didn’t seem to be force feeding her Mom subliminal messages every time we see them together. Like she does here: 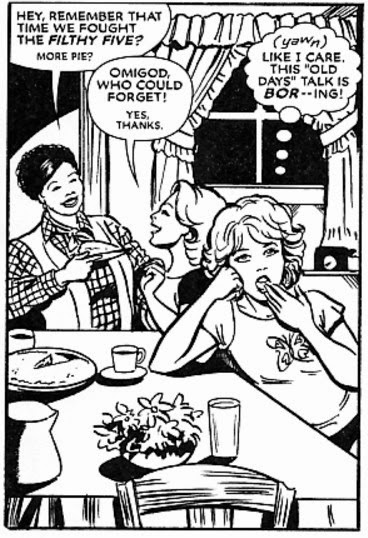 How long till she lights the oven and pushes Lindsay’s Mom in? Days? Hours? Lindsay decides she doesn’t care to watch her Mom make a pig of herself, takes that crazy radio she found and goes flying. The radio doesn’t work, but she soon has fun racing Shep, Liz’s collie.

That’s when it happens. Lindsay runs into the cattle rustlers who are stealing Liz’s cows. Lindsay rushes in to take care of the dastardly villains. 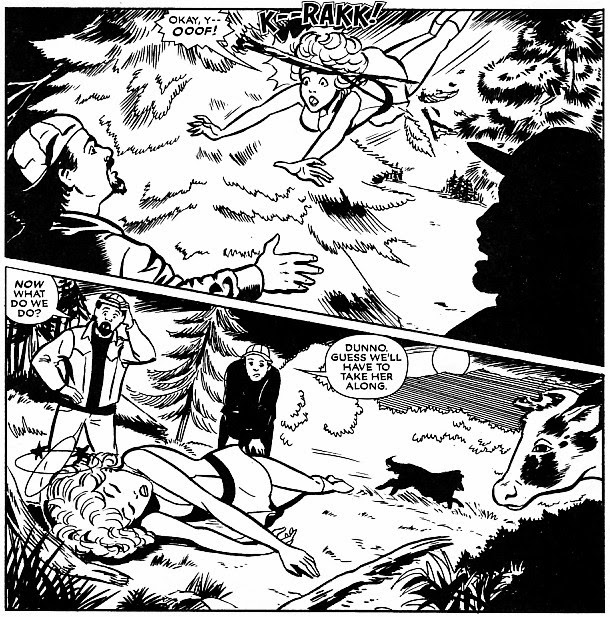 And cold-cocks herself on a low hanging branch. Knocks her butt flat out, too. I’m betting she’s not quite ready for a rogues galley of super powered criminals all gunning for her. I’m not sure if she’s ready to walk around without adult supervision, if you want to know the truth. Note that the dog runs for help. 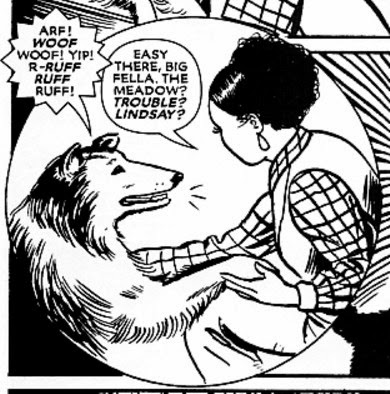 “What? Timmy’s fallen down the well? Again? That’s the third time this week.” This is a scene lifted directly from the Lassie TV show. I have no clue what Right On Sister’s powers are, but talking with animals seems a stretch. Oh, and right before Shep burst in what was Lindsay’s Mom doing? Still eating pie. I’m beginning to wonder if the pie isn’t laced with some kind of addictive substance. Next she makes a startling discovery. 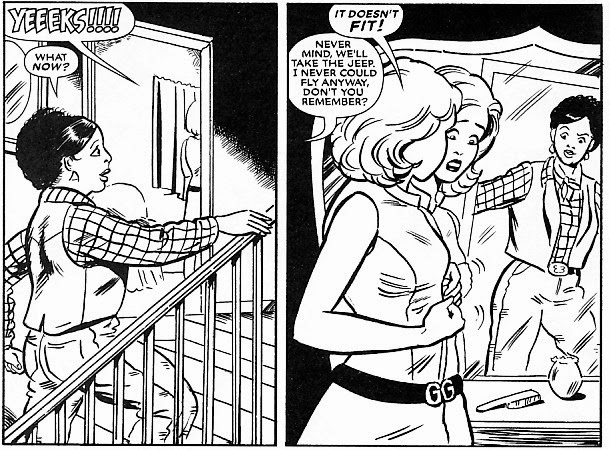 Fatty, fatty, fat, fat! Sorry, I couldn’t resist. So they take Liz’s jeep right after Liz picks up her shotgun. It’s for the best, since I don’t think Lindsay’s Mom could get airborne with all that extra weight she’s packing.

Meanwhile the cattle rustlers are still trying to figure out what to do with Go Girl. These guys stand around saying “What do we do now?” until Liz shows up and draws down on them. But wait! The cattle rustlers say they didn’t steal all the missing cows. So what happened to them? 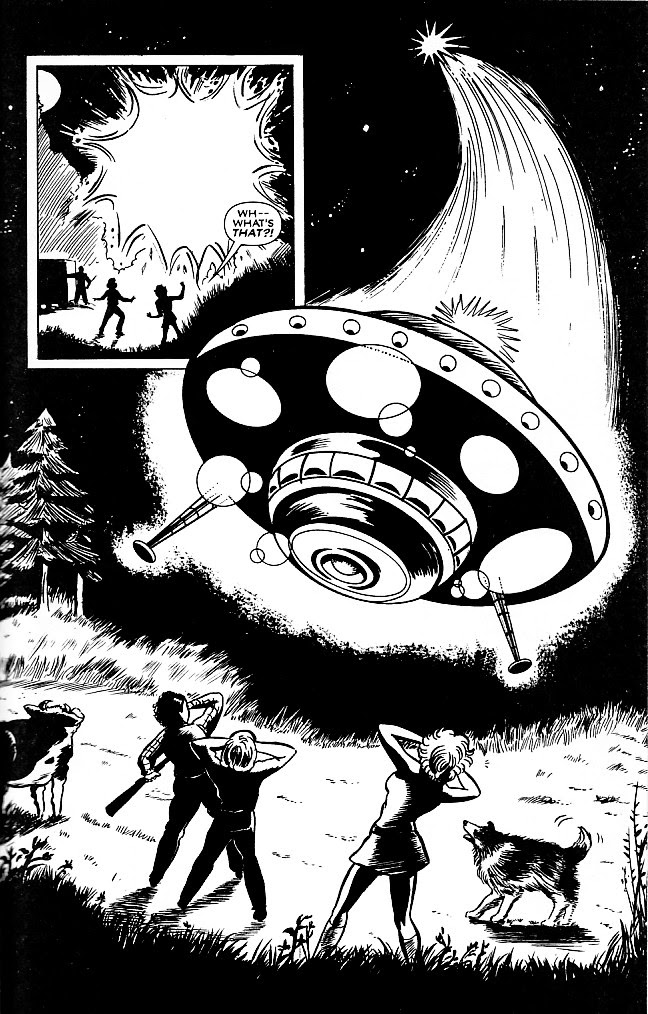 Oh, yeah. Those space aliens. Wait a minute! What?

I’m not saying this plot development comes from totally out of left field, but it really, really does. I mean, we all saw the flying saucer on the cover, but who believes that covers ever show what goes on in a story. Anyway the aliens show up and start taking some of the cows.

It’s at this point that Go Girl does something useful for the first time in the whole issue. She uses the strange radio to communicate with the aliens and learns why they are taking the cattle.

So they traded aliens shaped as cows for real cows except they didn’t trade the correct number and/or some of the alien cows might have been cattle rustled. Confusing and not exactly the way I’d think an advanced race from the stars would go about learning our customs, but whatever. It’s about this point that I start to wonder if Liz or Lindsay’s Mom had any milk to go with their pies. 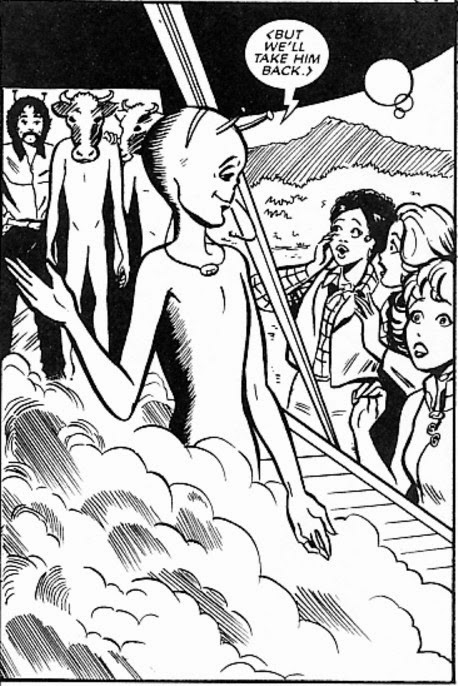 Oh, and Hoss was an alien. Notice the look on Liz’s face when she realizes she’s been sleeping with an alien all this time. I wonder if she’s worried about having a mixed race baby?

All’s well that ends well. Liz gets her cows back but loses her “handyman”. Lindsay and her Mom head back to the city with the gift of a pecan pie, which is way more credit than they deserve. The smugglers are never seen again, so we assume that Liz ate them or baked them up into that pie she gave Lindsay’s Mom. 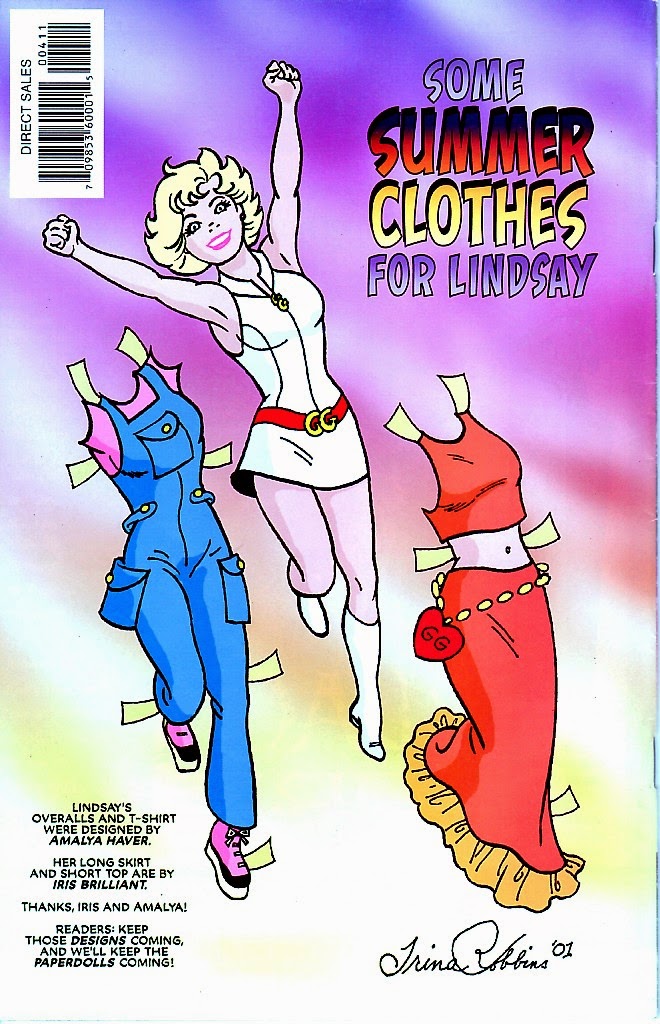