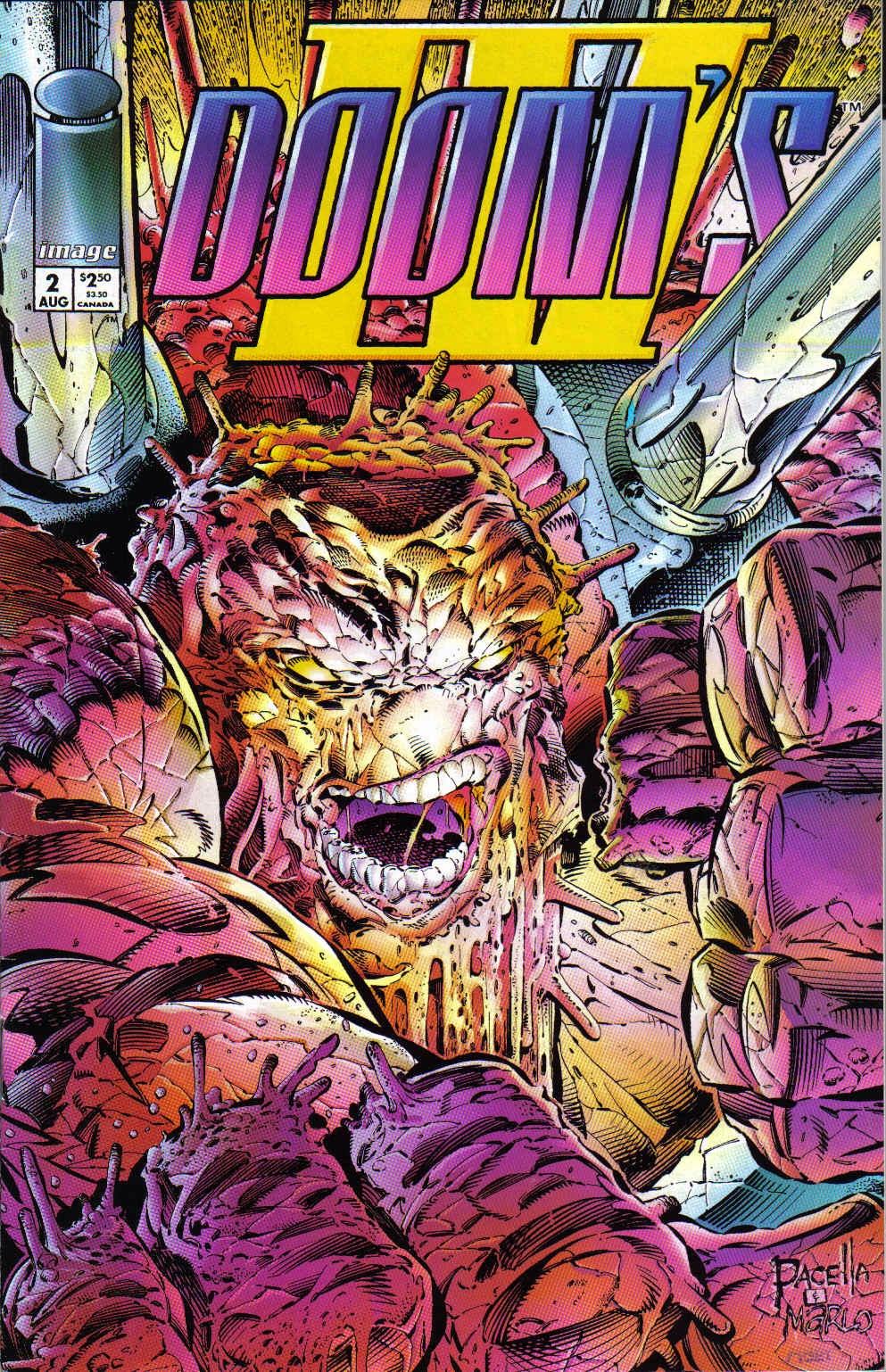 Doom’s IV was a team book created and written by Rob Liefeld, so it shouldn’t surprise anyone that it only lasted four issues. Liefeld was like the industry’s ADD child back in the '90s. He would start a series and then get distracted by something shiny before a month had gone by. Thus a bunch of Image books are credited to him, just not many of them actually end up going anywhere. The bad news to all of this is that Doom’s IV actually did last four issues and I now own one of them.

The title of this book refers to three refugees from the Doom's Corporation and a very Cable-lite guy from the future. They joined together to fight the evil head of Doom’s Corp, Syber-Idol. Yes, it sounds like “cyber”, meaning computer so that makes him a cool villain. Also he won a televised talent contest hosted by Ryan Seacrest.
So who are these four renegades against big business? 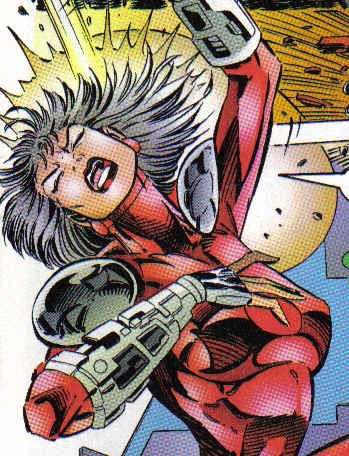 First up is Burn. Bet you can’t guess what her power is. *coff*humantorchripoff*coff* 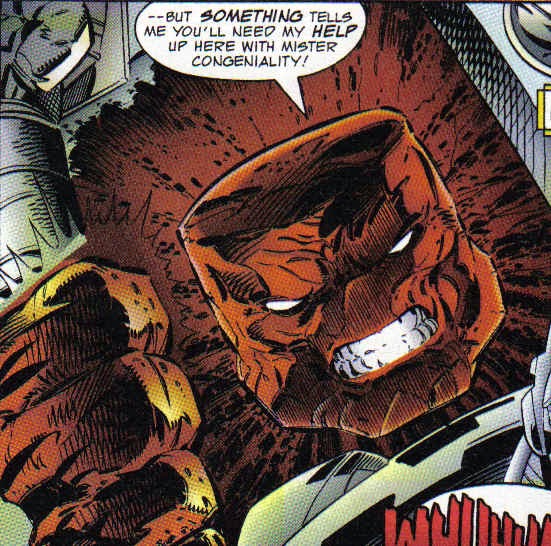 Next up we have Brick. Brick looks like a red version of the original Thing. He’s the group’s strongman. But wait, he has other powers! He can make himself as hard as rock or as soft as sand. So he’s like "the Thing that isn’t glued together real well." So far I’m seeing some similarities to another, better written foursome. Quick do something completely different! 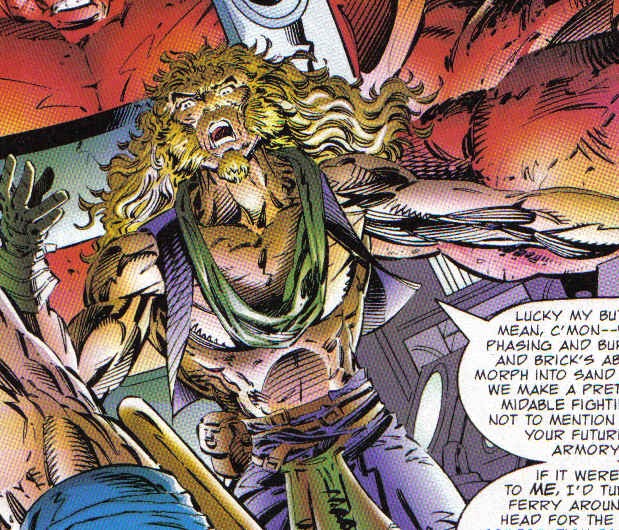 Third in line is this fellow. Slyder shares Wolverine’s hair stylist and his kick-their-butt attitude. His powers are control of computer systems and the ability to phase through objects. Apache Chief called him and he wants his outfit back when the series is done. 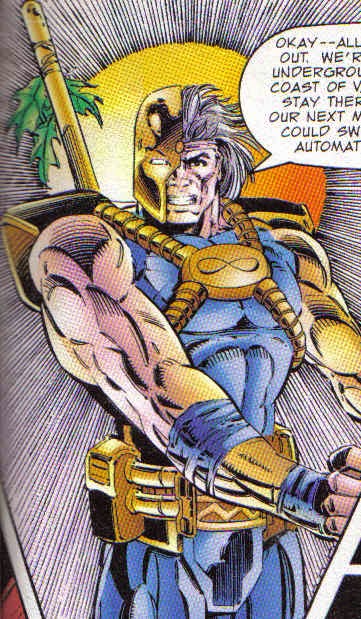 Then there’s Grimm, who only has one eye, which in Liefeld terms means that he’s from the future and has the super-power of owning a lot of futuristic weapons. What’s up with Liefeld’s future? Why has everyone from there lost an eye? Is it just full of sharp objects that stick out at head level? 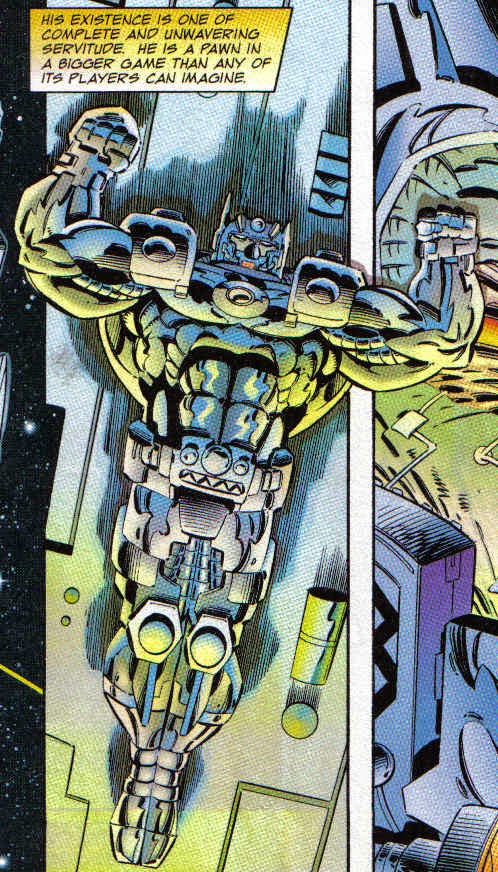 They are currently fighting against Mech-Max, a cyborg pawn of Syber-Idol. I really like Mech-Max’s design, especially how his crotch has a goofy clown face on it. 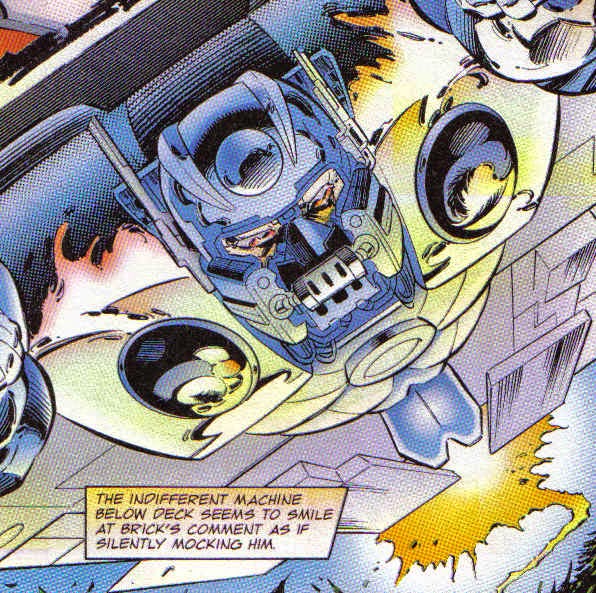 Mech-Max has amazing phenomenal powers. Like the power to smile even when his mouth is completely obscured.

Seriously, I’ve seen gangsta rappers with less grill than Mech-Max is fronting here. What other powers could he have? 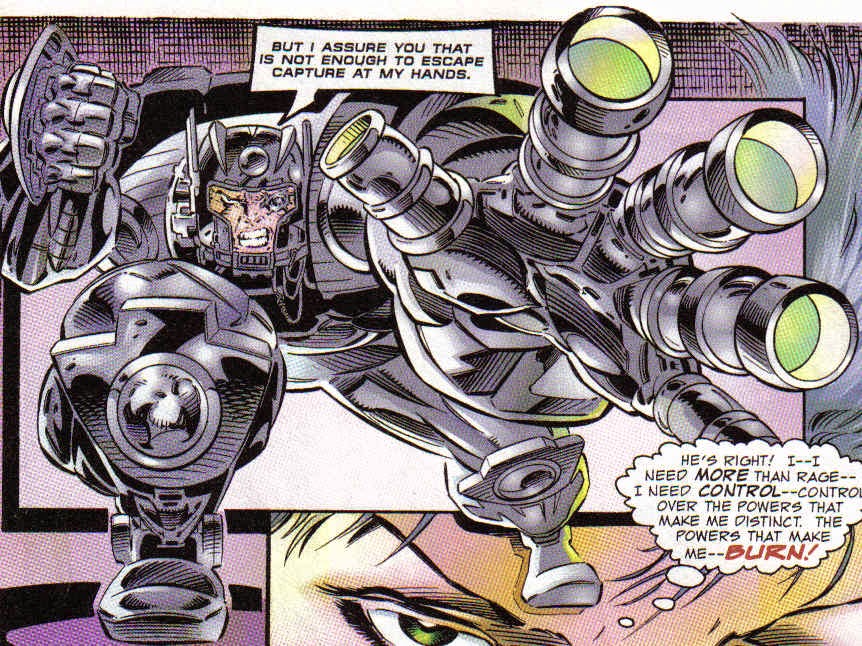 The power to squeeze his body into tiny panels. I call this look the “retard-o-Kirby” since it ends up looking like a Jack Kirby pose but drawn so badly it looks retarded. Oh, the other power that Mech-Max has is to make Doom’s IV’s powers go all haywire. Also, he turns into an exact duplicate of Syber-Idol so he can emote and stuff.

Take a close look at Syber-Idol. Bet if this series went on beyond four issues, we would have found out he was from the future.

Anyway, Mech-Max attacks the foursome while they are flying Grimm’s spaceplane to their new hideout. He bursts through the floor of the plane and suddenly It’s Clobberin’ Ti*…sorry, wrong book. The team fights him but suddenly he makes Brick, Burn and Slyder’s powers go haywire. That leaves only Grimm to take him on with his awesome weapons from the future. 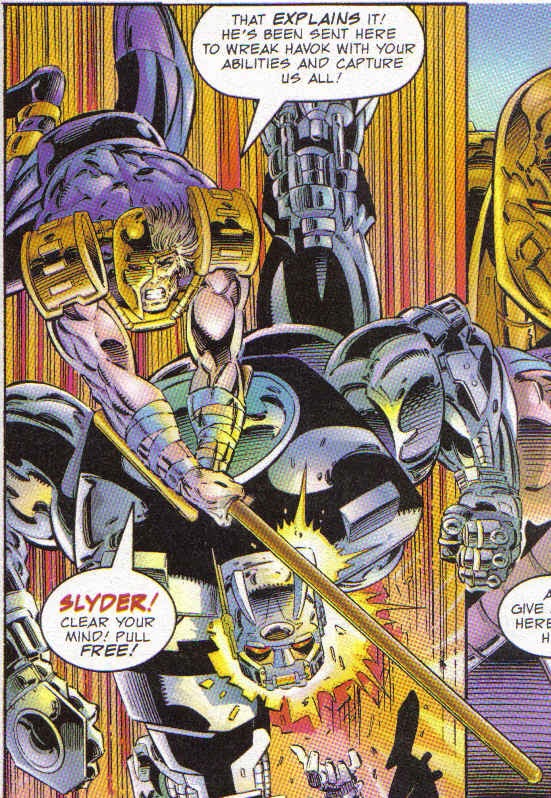 A stick? His future weapon is a freakin' stick? It’s not even got an eye-gougingly sharp point on it. Needless to say, the battle doesn’t go well for Doom’s IV and their spaceplane crashes killing all aboard. 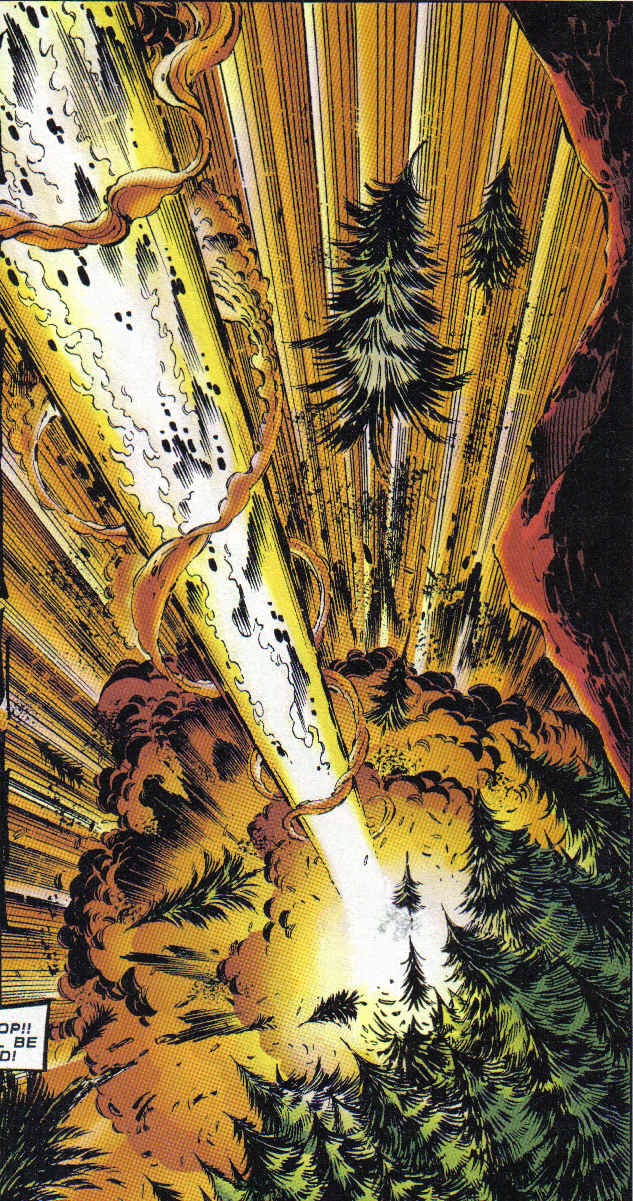 That’s what I’m choosing to believe. And the two issues that came after this were filled with nice, clean, blank white pages…
Posted by SonOfCthulhu at 4:13 AM