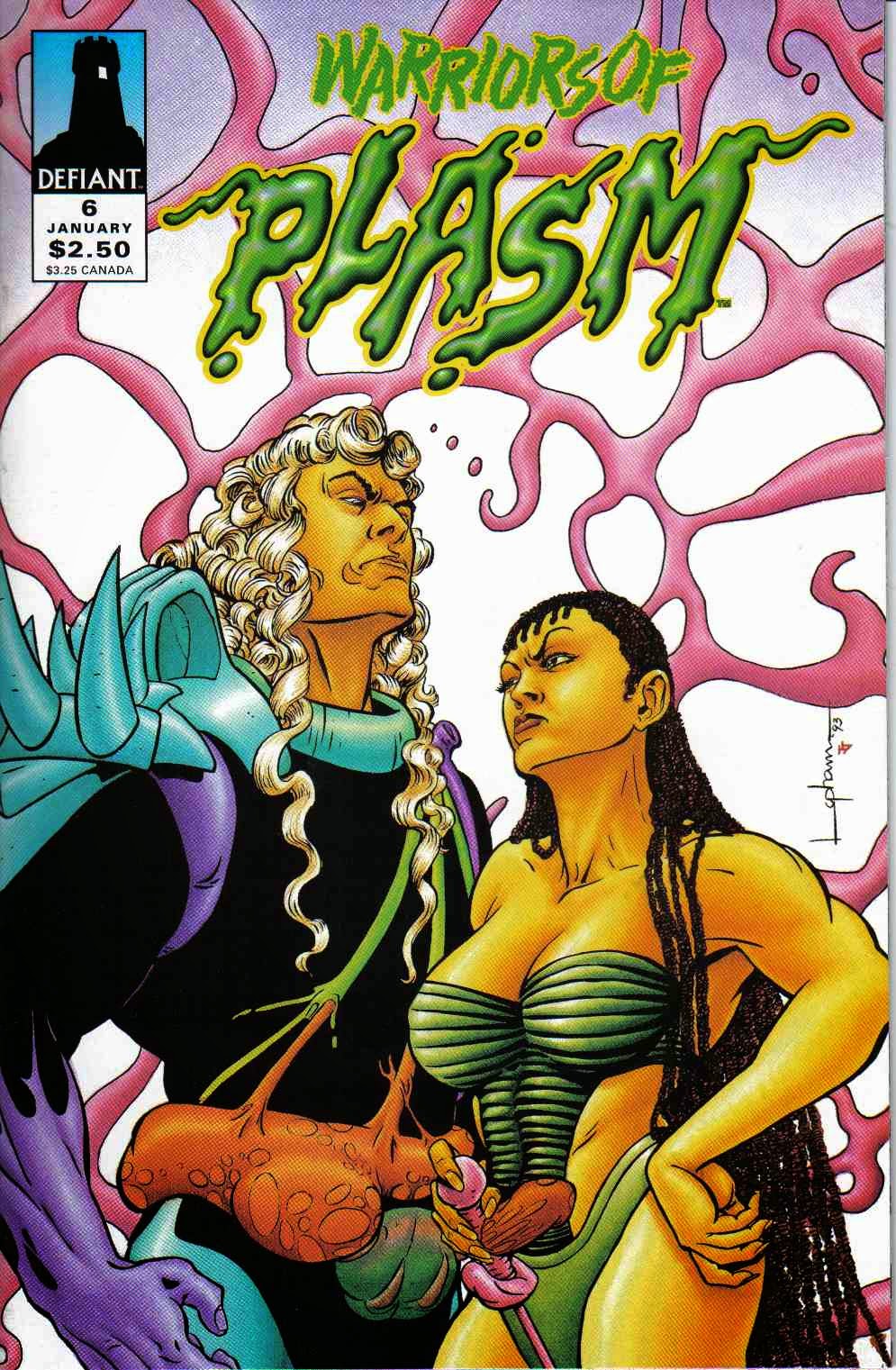 I could spend all day making fun of the cover alone. Was the colorist for this cover on loan from Barbie comics? What’s everyone smelling? And why is that dude wearing a bladder around his waist like one of those lap-purses?

Warriors of Plasm was a creation of the head of Defiant publishing and Ex-Mavel Editor-in-chief Jim Shooter. Back when he wrote Starbrand, I thought hightly of Mr. Shooter, counting him a pretty savvy writer. Seems I may need to reread those old issues in light of WoP#6. Art duties are by Stray Bullet’s David Lapham. I guess he got better or something, because nowhere in this slime-fest do we see evidence of his greatness-to-come.

“Plasm” was the series name when first published, but the name changed when Marvel sued Defiant. Marvel’s suit claimed that they had a similarly titled project and that Shooter knew about its upcoming release. Defiant changed the name but fought a lengthy court battle with Marvel that ended up bankrupting Defiant. Marvel ended up never releasing its “Plasm” title.

This unique story begins with a living world out in space. No, not Ego, we are talking about a different planet. No, not Mongo, either. This is a wholly original concept. This living planet has to eat to survive. What does it eat, you may ask? Why other planets, of course. And lately it has set its sights on Earth.

Also the planet is inhabited by plasmoids, which look just like humans except for skin color. The plasmoids use parts of the planet as guns, buildings, lap bags, space-ships, etc. and generally spend a bunch of time surrounded by stuff that looks like the inside of your small intestine. Some of the plasmoids don’t like who is ruling their planet, so they capture some Earthlings and give them superpowers to fight for their right to rule the “Org of Plasm”. In this issue some of these fighters have returned to Earth to fight the bad plasmoids there. 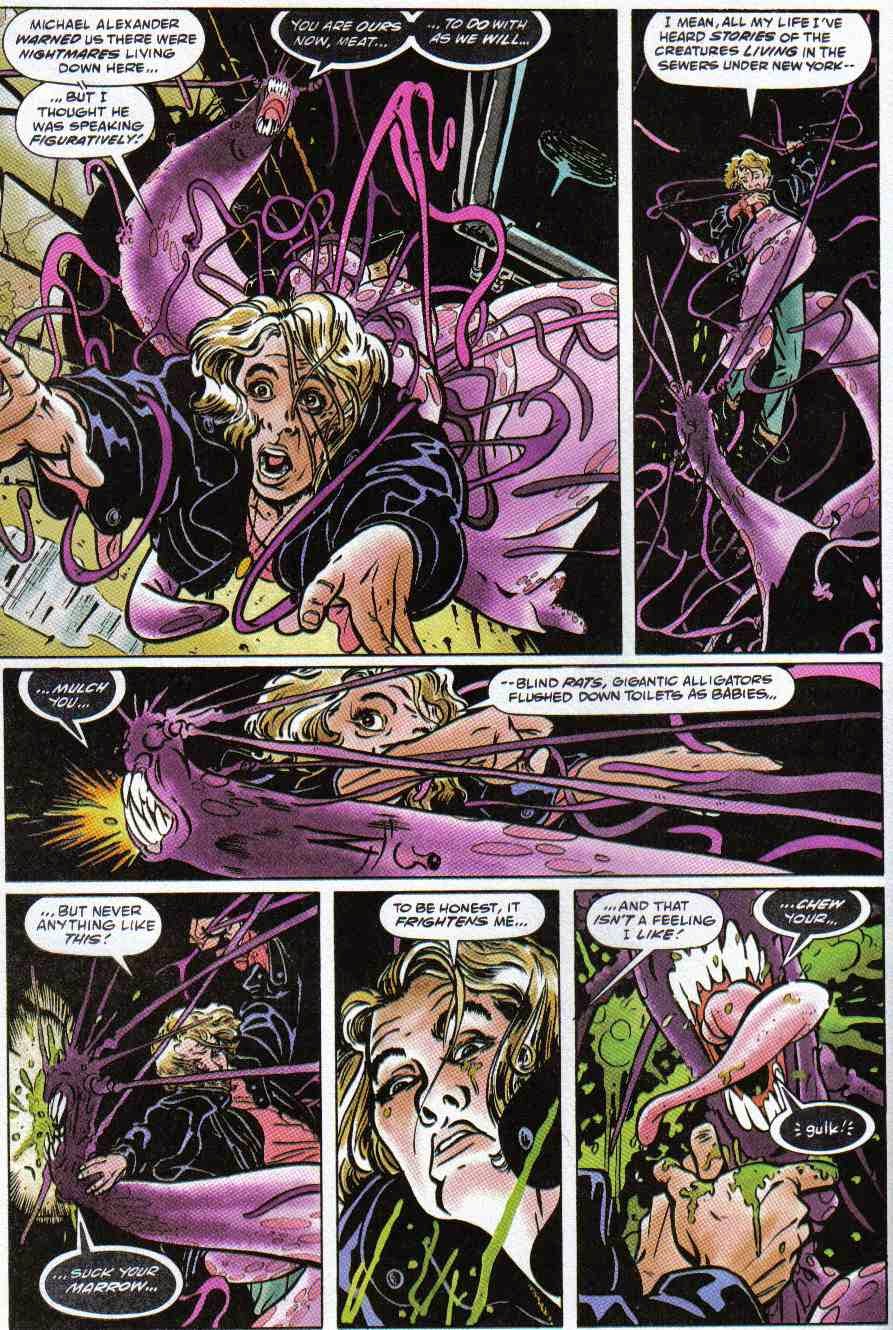 I love this fight scene. Mainly because this is one of the superpowered Earthlings. Her superpower: Super Exposition! Honestly, she talks too much. And wouldn’t you keep your mouth closed for fear of getting some of that goo monster in it on accident?

I feel the same way lady and I’m only on page 3 of the comic!

So she failes to get eaten by a sewer monster and we turn to the “Org of Plasm” – which now that I think about it sounds similar to “orgasm”. Hmmm. Anyway, this is the rebel leader who has taken over the planet. Clearly he’s having some problems as ruler. 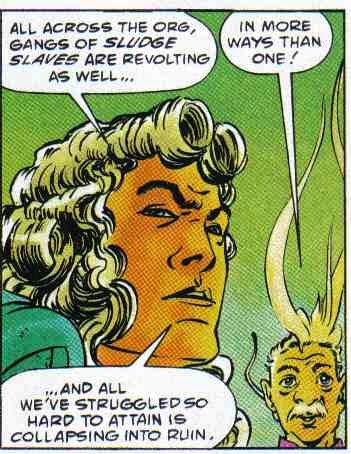 BA-DUM-BUMP! Remember, flame head is here at the comedy palace all week, folks!

This chick is hot. I have no idea what “twistrip you slowly and feed your nodes to the mulchers” means but I am definitely attuned to the fact that she’s noticed my “pusillanimous puspump”.

Too much setup for next issue happens in the middle of the book. One superhero guy overcomes his fear of dark sewers and another guy lets out a fairy prisoner he’s suppose to be guarding. I blacked out somewhere in there due to the nasty drawings of pus and the tendency for each character to speak every feeling they are thinking like an 80's X-Men comic. But I awoke in time for the ending. 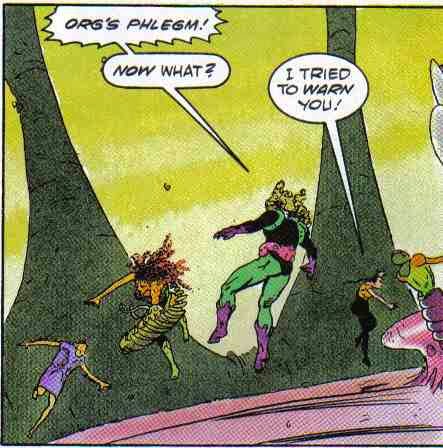 Someone spit on the leader so hard, he is catapulted four feet off the ground.

No that’s not it. Someone is banging into their planet. What? 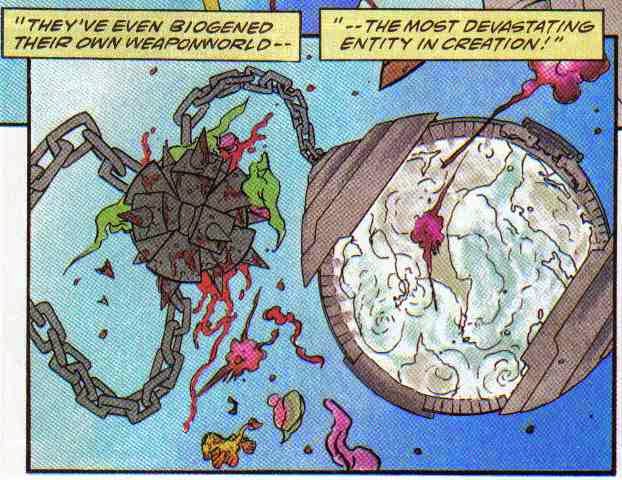 Yes, the pain, the pain! I saw this exact same scenario not more than a week ago on Invader Zim. It was called “Battle of the Planets” and Dib and Zim were using Marz and Venus like bumper cars trying to kill each other. In Zim it was comedic, here it’s just idiotic. If this was what was coming next issue, it makes me glad it was cancelled.
Posted by SonOfCthulhu at 6:40 PM