Sable: Return of the Hunter #5 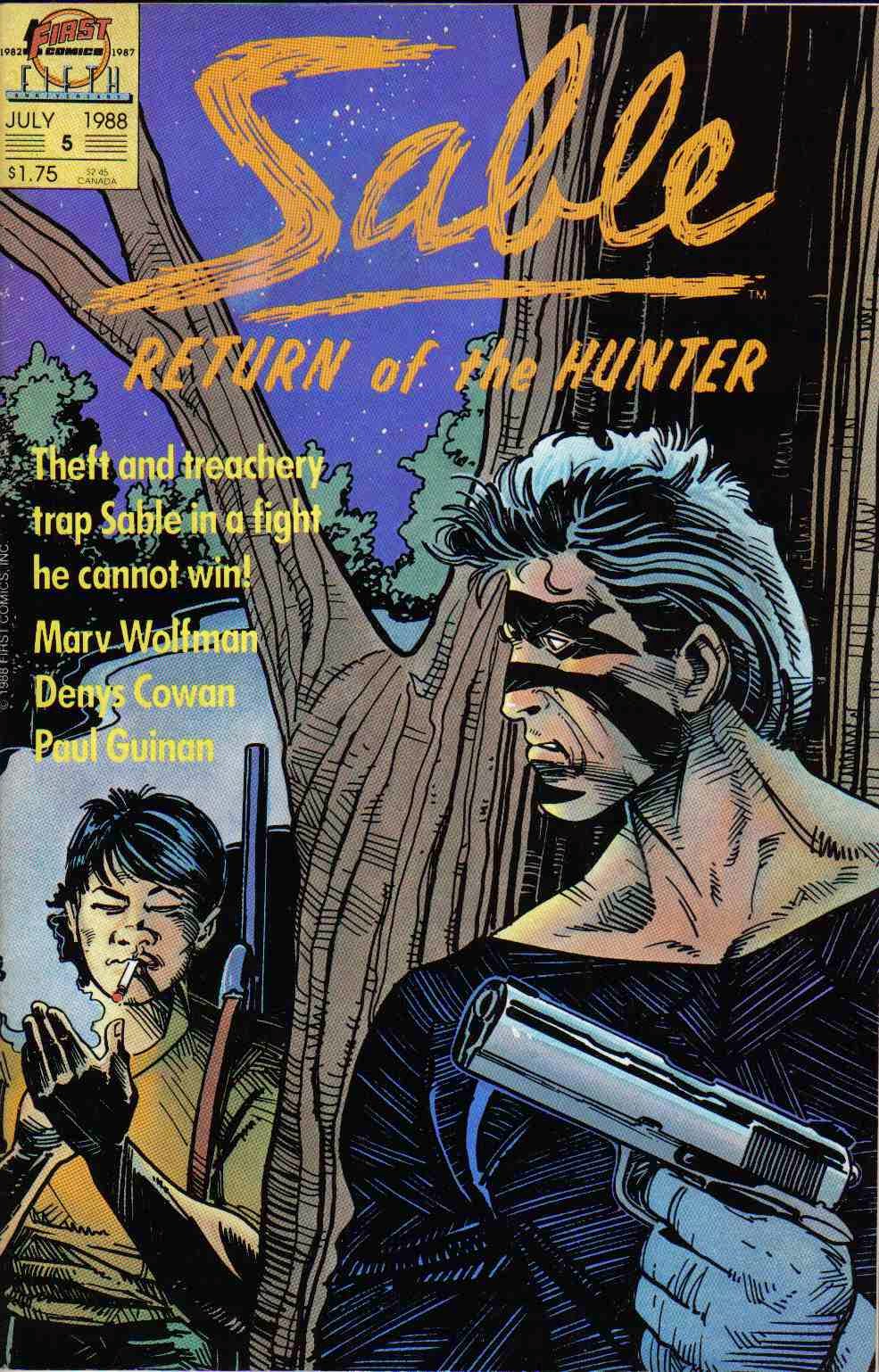 Actually, Theft and treachery trap Sable in a fight he cannot LOSE!

In 1983, Mike Grell created a mercenary character with a softer side in “Jon Sable, Freelance”. The series was a success for First Comics and with Grell at the helm, went on for over 50 issues. Sable was a creator-owned concept and in 1988 Grell agreed to a new series of Sable books without him on art or writing chores. Thus began “Sable: Return of the Hunter”. The series was made to capitalize on Sable the TV show and ended shortly after it was pulled by the network. Still it had a good run, lasting over two years.

Issue five was helmed by ex-Marvelite Marv Wolfman, with pencils done by a future Batman artist Denys Cowan. In it, we pick up Sable’s ongoing story as a freelance do-gooder and children’s book author. Sable recently was bested by another mercenary named Penelope in taking down an old enemy. In the ensuing melee, his current girlfriend and illustrator of his children’s books, Myke Blackmon, was shot and injured. We open on a money drop with someone who’s very guilt-ridden over something. 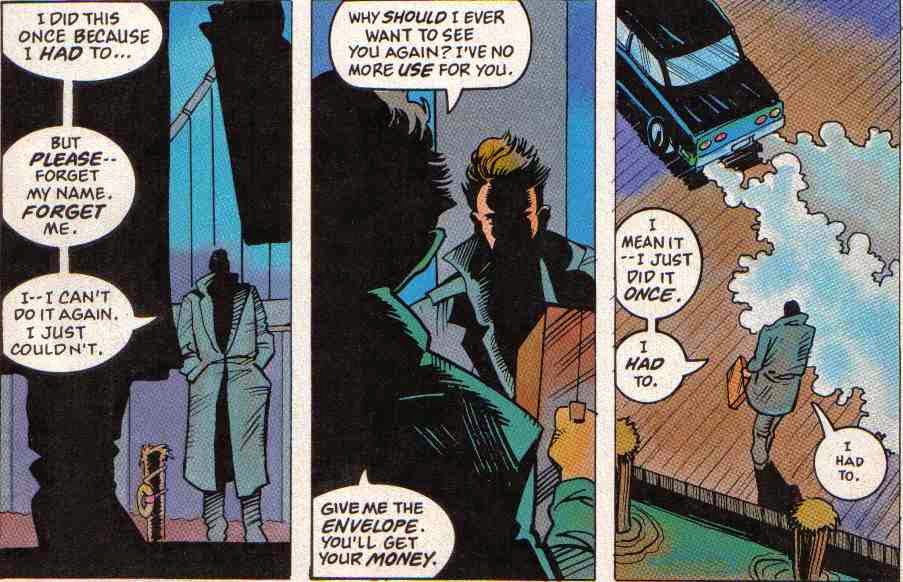 Meanwhile Sable is helping Myke recuperate, when he receives a call for a freelance job. It’s for a money-drop with supposedly no danger involved. If Sable won’t take it, his agent drops the hint that Penelope would. Myke is dead-set against Sable going out for this type of dangerous work. 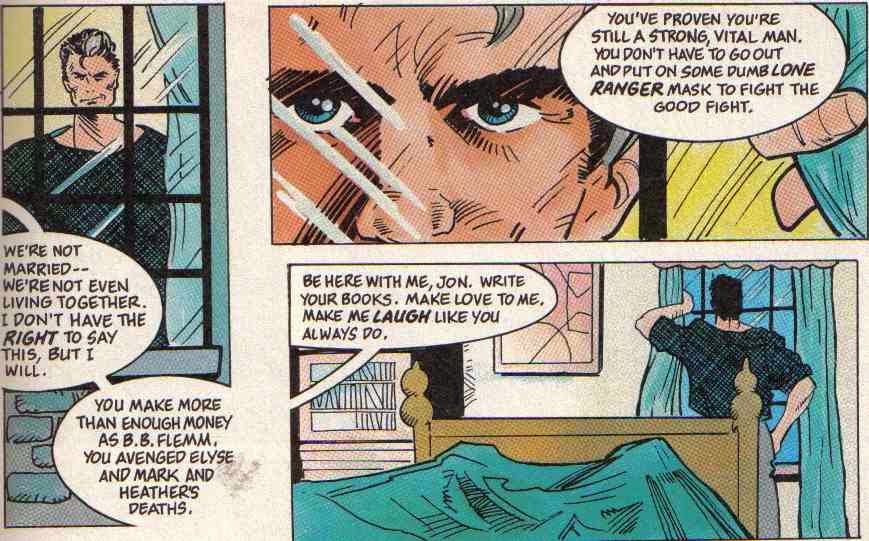 And of course he says yes, stays there and makes hot monkey sex to the woman he loves instead of rushing off into danger for money he doesn’t need, his vengeance over losing his wife and daughter years ago put to rest cause he took care of their killers in the first series. So that’s the end of this story. Because that’s what I’d do.

…but I guess I’m not a macho guy out to prove something and possibly get killed while losing the woman I love in the process. Silly me.

Sable decides to take the job, which is dropping 2.5 million off in exchange for a stolen computer chip. His employer is the company who made the chip, but it was stolen by the Tong gang. The drop goes easy, but the chip he receives is a fake. Sable says hasta because going after the Tongs wasn’t part of the deal. Then this fella approaches him before he leaves.

Seems the guy was hard up for some dialysis that his insurance won’t cover. He stole the chip for the Tongs but didn’t see any of the money from it. Now he just wants the chip back to restore his honor. Sable agrees and has a friend look up the Tong’s address.

In the dead of night, Sable sneaks over the wall, dodges a security camera and knocks out two guards. Then he meets a pretty big obstacle. 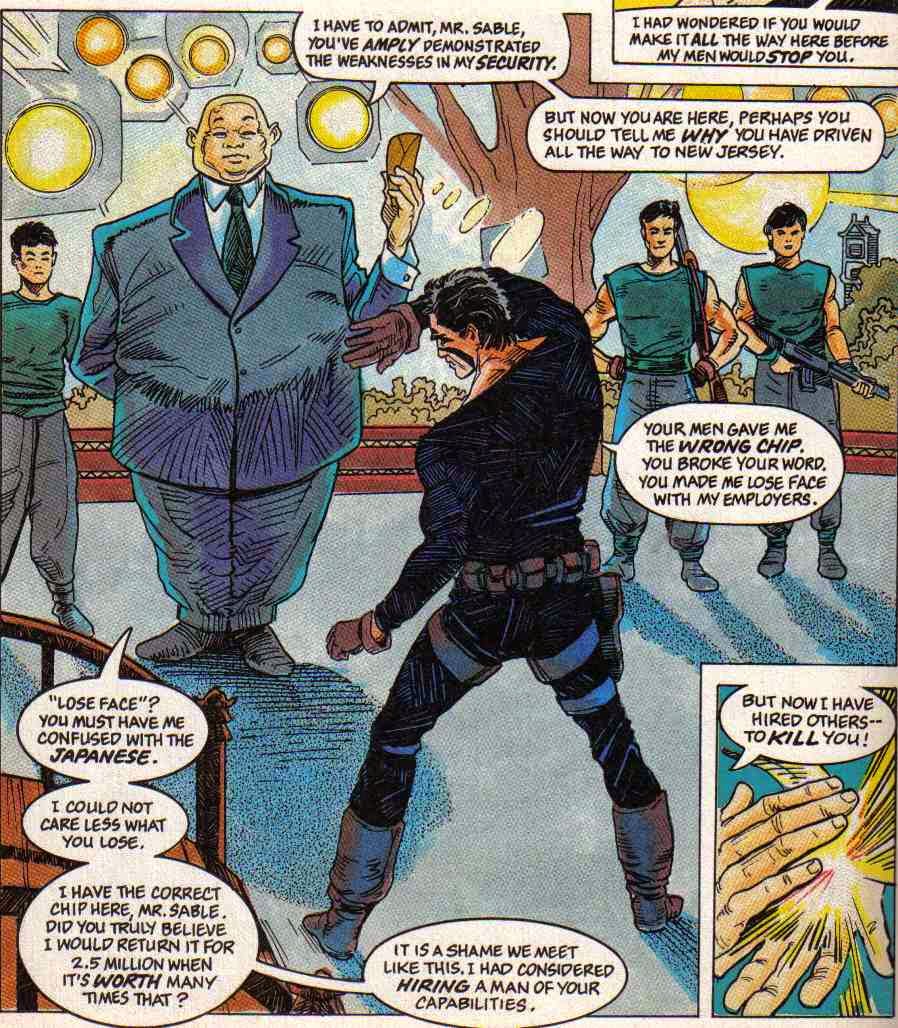 The big guy says to kill him and there are two guys right there with guns. I guess it’s all over for Sable because the obvious thing to do here is… 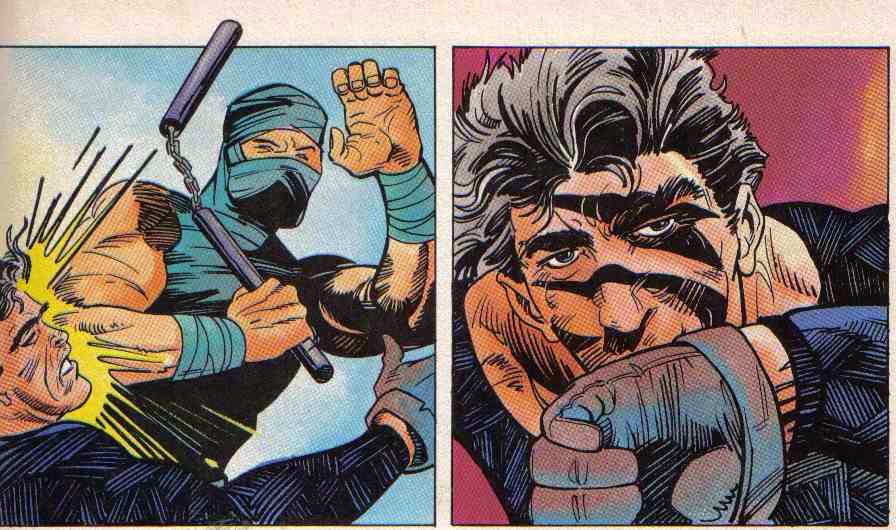 …hit him with nunchuks? 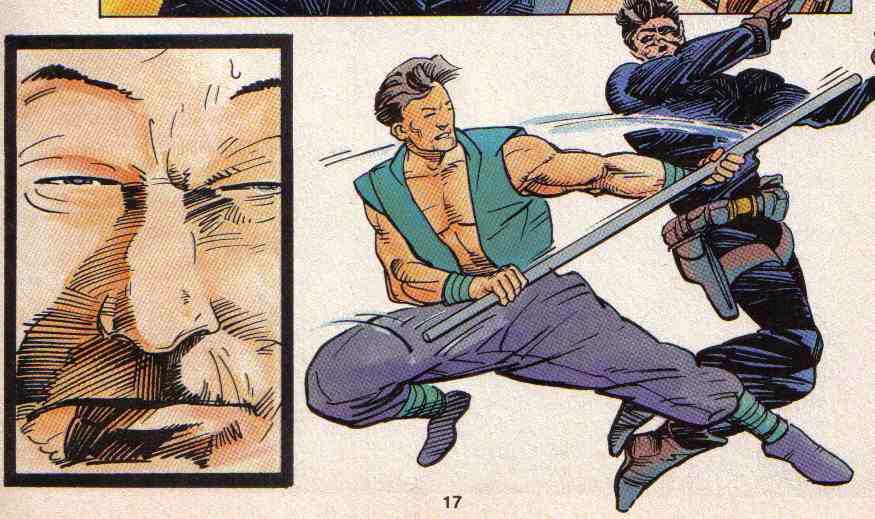 And then beat him with a bo staff? Are we trying to kill him or bruise him? Oh, the villain is monologuing. So this is just a warm up until he says kill him and really means it.

Hey, they are using sharp objects now! Still they had guns just a minute ago.

… their feet to stomp on him? WTF? Now baldy has to be getting a bit peeved with his workforce at this point. They had rifles trained on Sable not four pages ago. And now we get them trying to riverdance him to death? 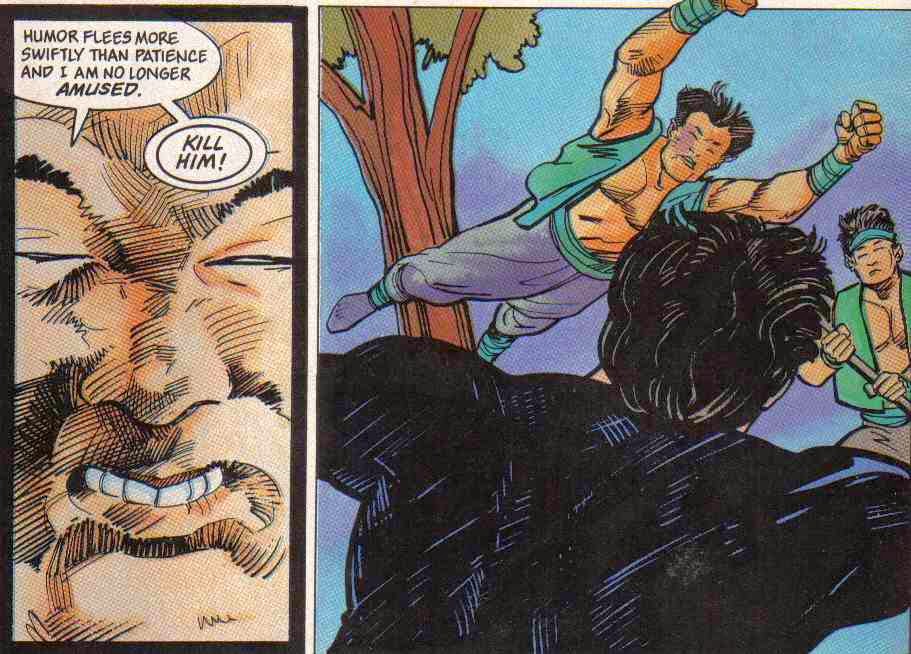 Boss: “Kill him”. Henchman as he jumps at Sable: “Weeeee”. You know you guys are giving him a chance to do something to get out of this, right?

And suddenly, the henchmen all have Uzis. Uzis that they could have used 9 pages ago on Sable. And there are like six of them. Any one of whom could have killed him when chrome dome got “fatigued”. If I were egg head, as soon as this was over, I’d  take one of those Uzis and show these numbskulls how it works. By making all of them into Swiss cheese.

So Sable cuts a deal and gets back both the chip and the money. The chip goes back to the company and the money goes to the dialysis dude. Oh and when he gets back home, Myke has left him. I’m not sure who’s dumber, Sable or the henchmen.
Posted by SonOfCthulhu at 4:59 PM