Of Myths and Men had a two issue run at Blackthorne publishing, before being tossed on the scrap heap. One look at the cover and you’ll see that they are obviously trying to grab some readers by knocking off Robert Lynn Asprin’s popular MythAdventure series right down to the artist copying Phil Foglio’s distinctive style of drawing. The book came out at the right time to be picked up by the easily misdirected too, as the MythAdventures books were serialized in the mid-80’s by WaRP Graphics and traded a few years later. This book’s debut was 1987. What kind of a company would stoop to publishing a book like this one?

Blackthorne Publishing came about after the breakup of Pacific Comics. The brainchild of Bill and Steve Schanes, Blackthorne was named after the street Steve lived on. It originally published cost effective comic reprints of things like Dick Tracy and Sheena, Queen of the Jungle. Many of these titles were over a quarter of a century old and in the public domain when Blackthorne put them out. The money garnered from these titles allowed the small publishing shop to branch out into 3D titles and original series. Legal loopholes allowed them to put out 3D titles for properties held by Marvel, like a successful Star Wars 3D series, by creating a new product category that the licensing contracts didn’t cover. The creator-driven black and white comics were a very mixed bag, but mostly low quality rip-offs of current trends. An example would be TMNT clone Pre-Teen Dirty Jean Kung Fu Kangaroos. Or this issue of Of Myths and Men.

The book is broken up into three stories. There are no ads to detract from them which is unfortunate. Art like this needs as much distraction and diversion as you can get. All three stories are drawn and written by Timothy J. Tobolski. The first is a superhero story with five characters who each gain the power of one element or plant control. The second is a occult superhero story. And the third is…well, it’s hard to describe what the third is. I’m sure it’s meant to be a superhero parody, but the plot is completely missing, the art so poor none of the characters are distinct from one another and they keep changing into outfits of better known heroes so they lose whatever individuality they might have started out with anyway. In short: the third story is a mess. A gawd-awful, “why am I still reading this?”, “wait, start back over at the beginning and maybe it’ll make sense this time”, “I’ve read it four times now and it still makes no sense” M E S S!

Let’s start with story number one and work our way to the chaos. The five person superhero story is called “Power in Numbers”. This is the setup for our heroes and stories to come. I’m giving away the mystery right now, the fifth hero’s power is plant control. Note that none of these guys have actual names and if you blink you’ll miss their superhero handles. 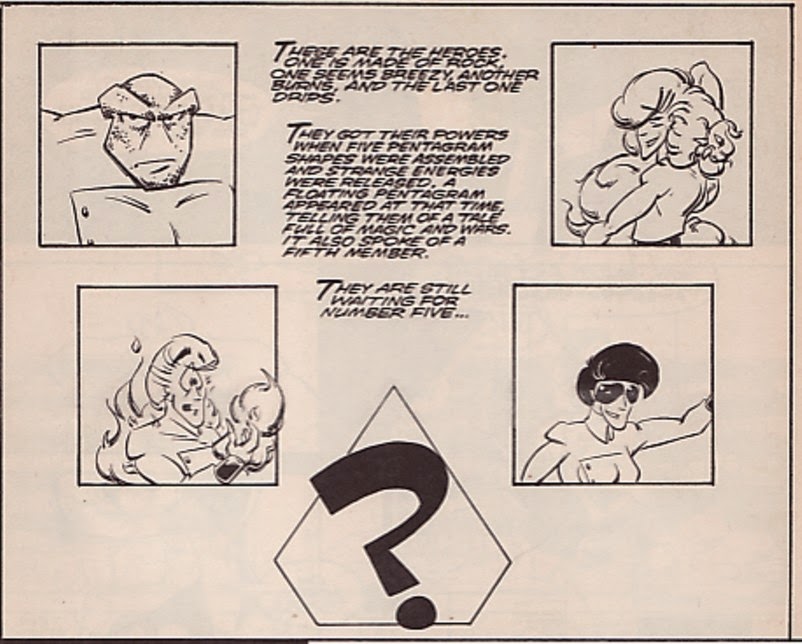 Nor do they have really defined sexes. I can’t tell how many are girls and how many are guys. They all have metrosexual hairstyles and their torso’s are so ill-defined that what I’m mistaking for pecks in one picture looks suspiciously like breasts in another. Without names and with ambiguous sexual characteristics, we have nothing but dialogue to flesh out the characters. And dialogue in this book appears to have been written by a middle-schooler. I love the way he introduces the villains. 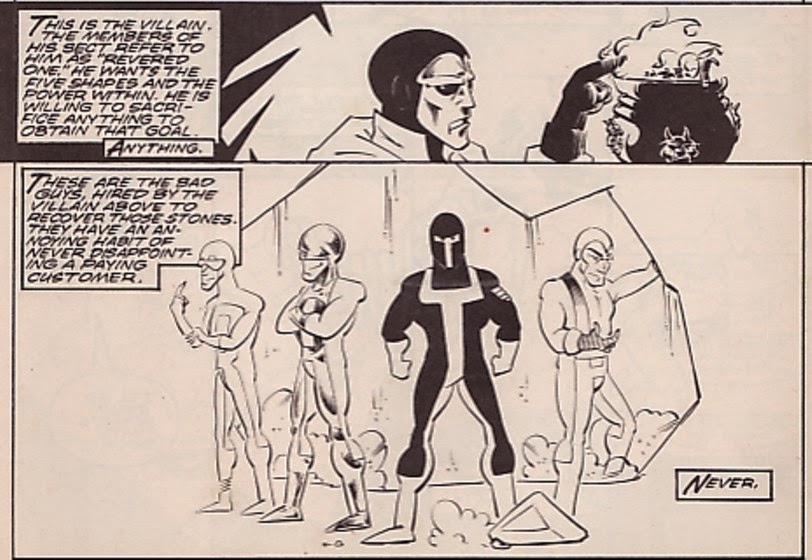 The “Revered One” will even give up his 1978 Scooby Doo lunch pail with matching thermos for those powers. He’s that committed. The writer has a horrible habit of repeating himself at this point. Horrible. I don’t think that could ever get annoying. Ever! Horrible! Aaaah, it’s contagious.

Super hero conflict goes something like this: lame villain tries one trick on super hero. Super hero deflects attack and incapacitates villain. No back and forth and barely a hint of dialogue, none of it as witty as the writer thinks it is. Here’s a sample: 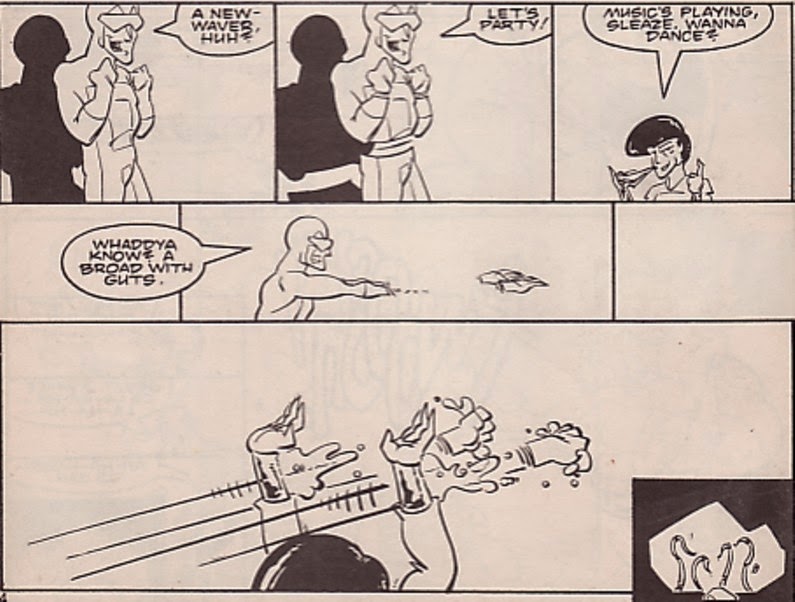 “…a broad with guts” must mean that “Drip” is a she. That dialogue sure is snazzy too. I really like the villain’s power though. Projectile hands are really useful. Like when you need a beer but are too lazy to get off the couch. Just shoot one into the kitchen to bring back the brewski. Niiice! In this situation, however, the hand thing doesn’t work so well.

And if the bitch-slapping they are getting here wasn’t bad enough, the fifth member shows up riding a giant vine and wraps them all up. Again not sure if it’s a man or woman, but he/she pats the big rocky guy and calls him “my love”. These characters are so crudely drawn that even Pat Robertson couldn’t figure out if that panel shows gay love or not. I’m kinda wondering if the artist/creator didn’t draw them that way on purpose because he hadn’t decided himself what sex to make them.

The heroes smash the loser villains who “never disappoint a paying customer. Never.” through the roof and proceed to begin talking to themselves. I can only assume that’s what they are doing since no combination of the text bubbles will make a coherent conversation. 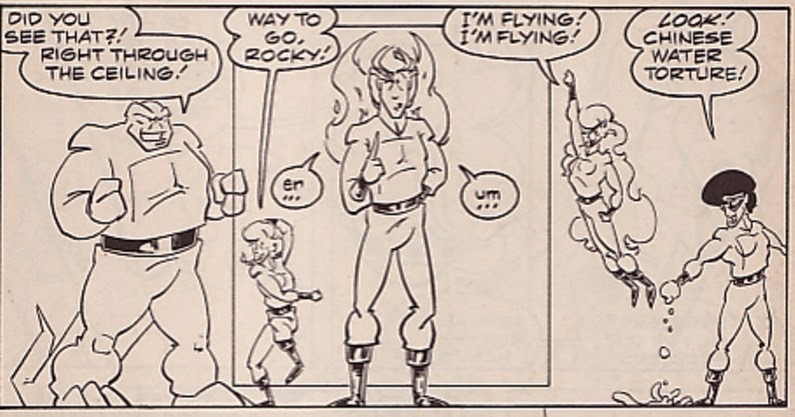 See what passes for dialogue in this book. Wait, it gets worse in the other stories. However, to wrap this one up we end with the heroes being zapped away. Not for good, I’m afraid. They appear to be crossing over next issue with Kelly Darklighter, the star of our second story. Kelly is sort of a low-rent Dr Strange. How is Kelly’s story you might ask? It’s even less entertaining. Kelly is called by his faithful pet/associate Stonehenge (and by called I mean called via telephone) to check out a magician who appeared in an alley. The magician appears addled and cast a few spells at Kelly. Kelly pulls out test tubes and uncorks them to counter the spells and to cast one of his own. The magician breaks free and then summons “the fury of the elements unleashed” which leads to the five heroes from our first story appearing. Out of the three stories this was possibly the easiest to follow. Not enjoyable, mind you, but straightforward enough for one to come away knowing what happened. Not so with story number three.

Story number three starts out with a Superman origin homage with the twist being that Krypton is actually a bee hive about to be fumigated and the baby bee shot from it lands near some ants. It looks like a fairly easy to follow parody beginning and I’ll admit that it had me anticipating an enjoyable tale. Then what appears to be five other stories intersected it and blow those thoughts all to hell. Here’s the title page to this mess. 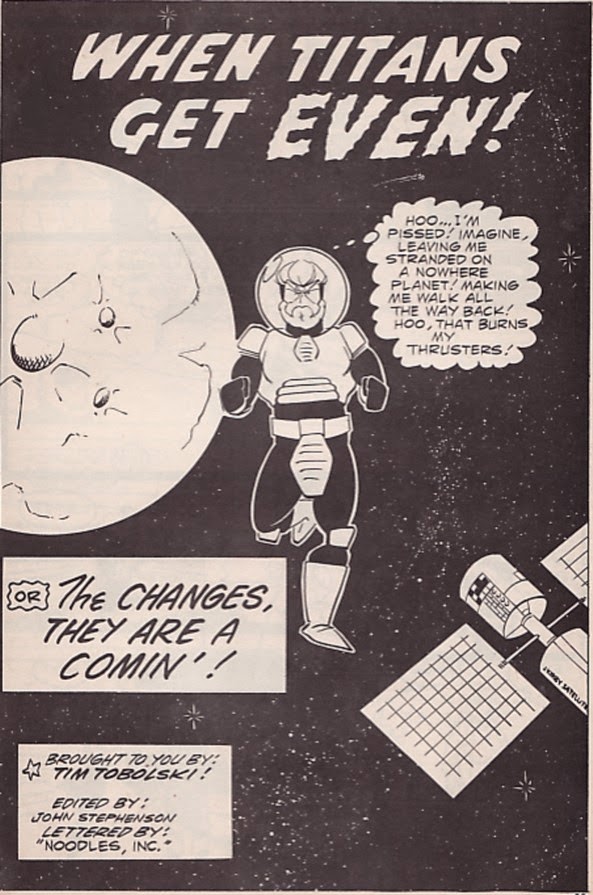 See this guy. I have no idea who he is. Nor will I after I’ve read the entire 12 page story. I guess his name is Teeja, as a few of the other characters mention that name in an offhand way. Appears he’s ultra powerful and can grant wishes or something. Well you have four other superhero guys in the story who Teeja decides need to be taught a lesson. So he turns them into random characters from other comic books. Sounds like an ok story idea, right.

Let me show you why it’s not. 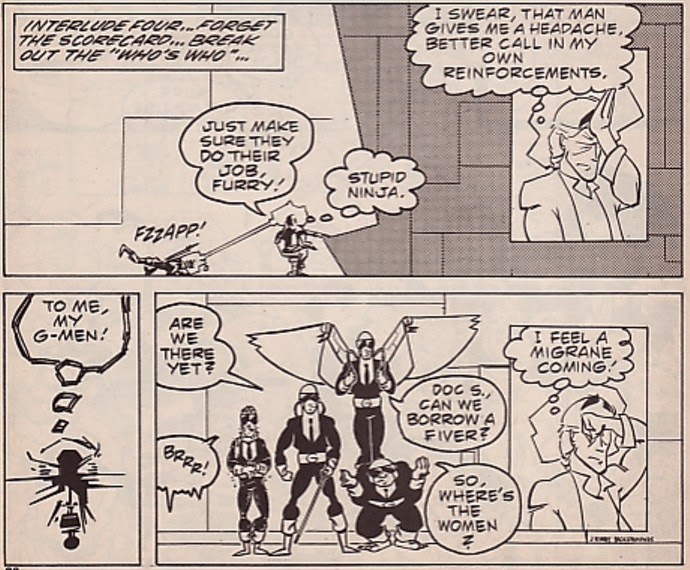 Combine the lackluster art, the clichéd dialogue and the inability of any reader to distinguish one character from another and you end up not knowing who is who. Think about it this way: imagine reading a Marvel mutant book, but instead of drawing Cyclops, Rogue, Storm etc. the same way each panel, the artist decided to completely change their outfits every page. Not just that, the writer decides to change their powers every two pages too. And then imagine that none of the characters actually address one another by name or superhero handle, they just shout things out to the room in general, adding to the confusion. To top all this off, break both the artist’s hands, so he has to draw with his feet or mouth and fire the colorist. Ta-Daa. You now have the Of Myths and Men experience.

I’ve read this story about five times now, and I have no clue what happens. The characters get wishes, then they change outfits a half dozen times, then one of them called The Bulk tries to swat our superfly with a flyswatter only to get flipped, then they let the fly join them as they form a detective agency. I’ve never read a comic before where I don’t remember even one of the character’s names in it. Hell, I think one of the names is even printed on the cover. When this came out, audiences thought it was completely forgettable too. OMAM lasted a scant 2 issues and then became the stuff of legends. Really confusing unmemorable legends.
Posted by SonOfCthulhu at 8:38 PM