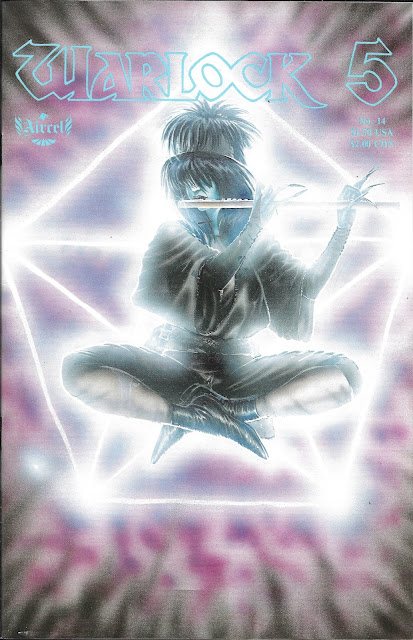 …and we are staggered by a sudden change in direction…

It had been two months since Warlock 5 issue number 13 had arrived in my pull box when issue 14 appeared to my overjoyed surprise. I mentioned in part 1 of this retrospective that Warlock 5 had a rocky publication history, so one month gaps were not altogether uncommon occurrences. At first Warlock 5 had a great track record for showing up every month with oodles of good content. But as the title moved on past issue number 7, occasionally a month would go by when I didn’t see a book from them.

Oh, I worried I’d missed an issue, of course. A empty slot in your pull stack doesn’t necessarily mean a spotty publication history, it could mean your LCS hasn’t ordered enough to meet demand or that their order got shorted and some pull lists couldn’t be filled. And Warlock 5 had grown in popularity quite a bit. I recall the current issues lasted until the day after comics dropped when it was up on the shelf and the back-issue stack was non-existent.

So, it was with a large sigh of relief that I saw book 14 was in. A lot of things were brewing in the prior two issues and I was excited to see where the story went from here. Issue 12 saw a battle that left Argon little more than a talking head. He was being carried around by an early 20’s burn-out whom he was promising a lot of things to in exchange for getting him back to his warehouse repair shop. Savastar had stolen (or attempted to steal) Tanith’s part of the grid. Doomidor and Zania appeared close to sealing  alliance against the others on the grid. And in issue 13, we saw a long-form dream of Savastar created by Tanith’s magic where the dragon contemplated how interconnected the five warlock all were and the Armageddon that would come if they didn’t stop fighting and learn to work together.

Things were coming to a head, in a way that almost felt like the saga could wrap up soon. Thematically, there were lots of clues in place that these five would need to put aside differences if any of them were to survive. I rushed home with my copy in hand.

And placed it in the LAST position on my reading pile. I saved the good books for reading last because, after waiting a week for new books, at first ANY comic seems good. Pull titles I was close to dropping would be devoured first when I got home, anything that would sate the beast hungry for new stories. Just when they started to taste a bit stale, I’d hit books that I really wanted to savor, and I would get excited to finish the stack. Reading books in the other order (best-to-worst) seemed counter-productive to me, as a really good, thought-provoking work (say Watchmen caliber) or something immensely enjoyable (like an early era Giffen Justice League) would make everything that came after it seem more of a letdown. Better to start with the lame and read on in ascending quality.

When I finally made it to the bottom of the stack I rushed through issue 14 to find out where things stood.

And then, in shock, I re-read it once more.

For starters I could tell the art wasn’t up to Beauvais’ amazing pencils and use of negative space. And the story was…You know, you just need to experience it… 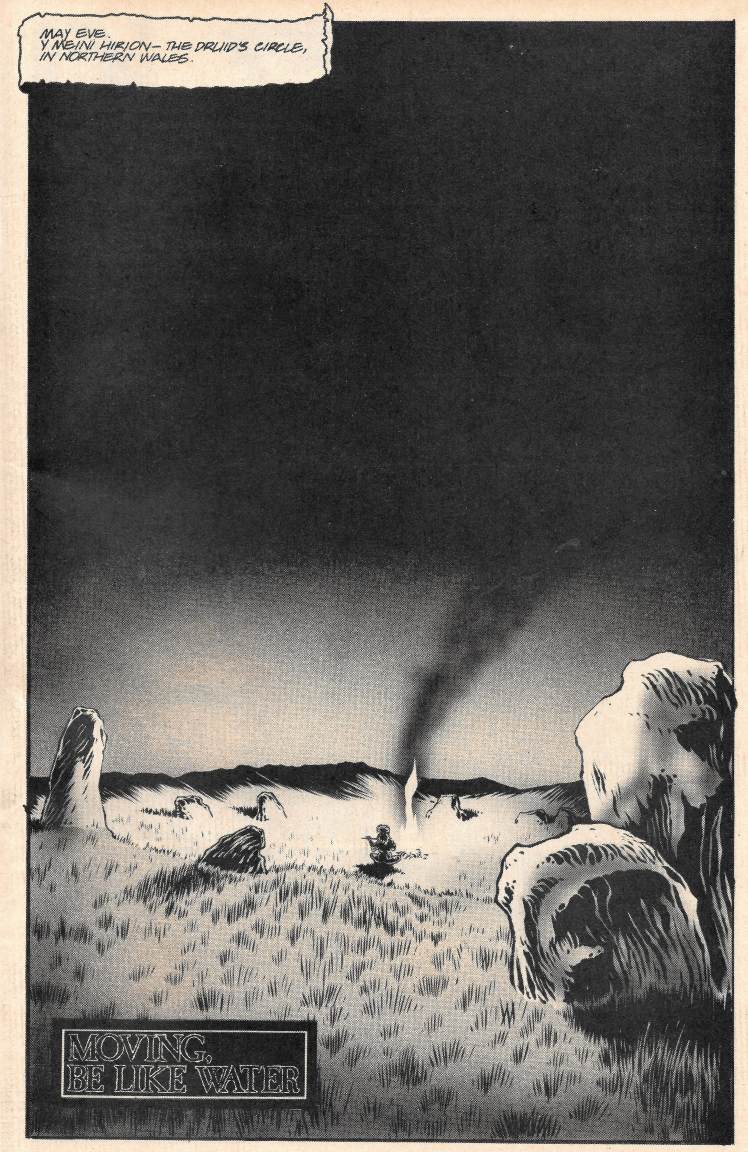 That cover tries hard to cover up what’s going on inside, but page one shows a remarkable lack of detail and half the page is black. Pat McEown and Barry Blair are trying their best to ape Beauvais and failing miserably.

You can really tell on page two because the new central character is the Celtic druid chick who looks pretty much like models on every other Barry Blair/Aircel book: a diminutive, pre-pubescent elfin waif (a motif that Blair would get rightfully panned for later on when these turned to erotica right before his early passing from a brain aneurysm.) 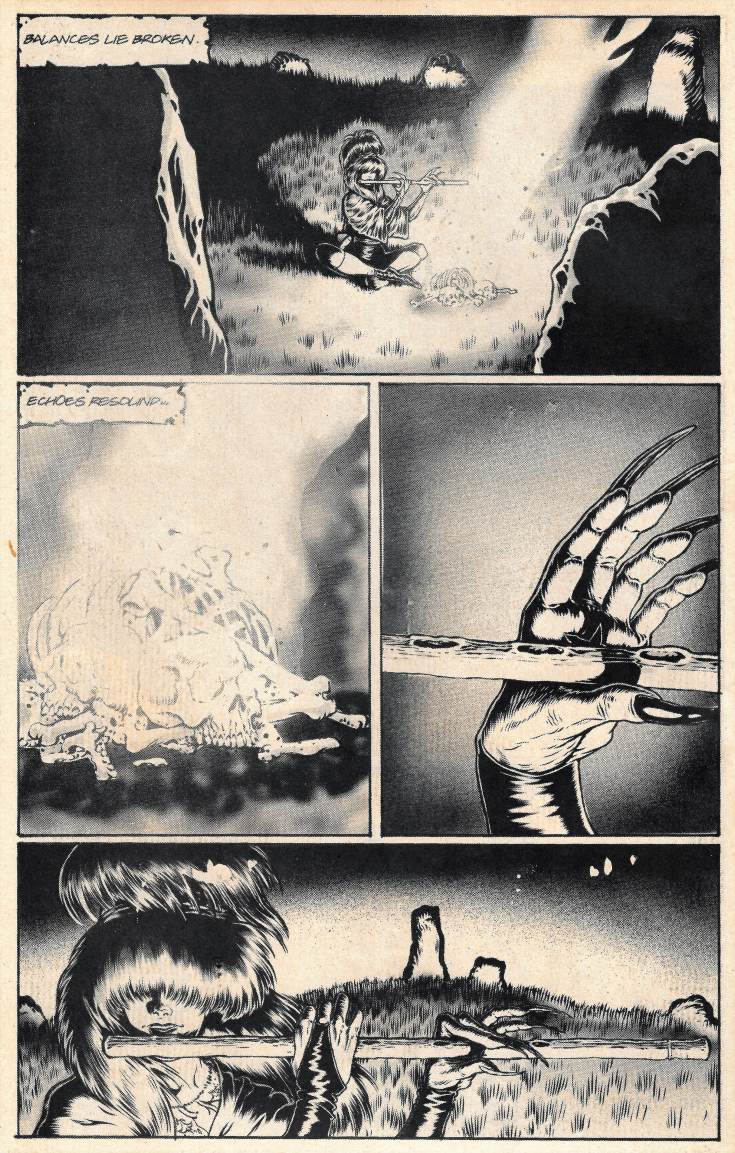 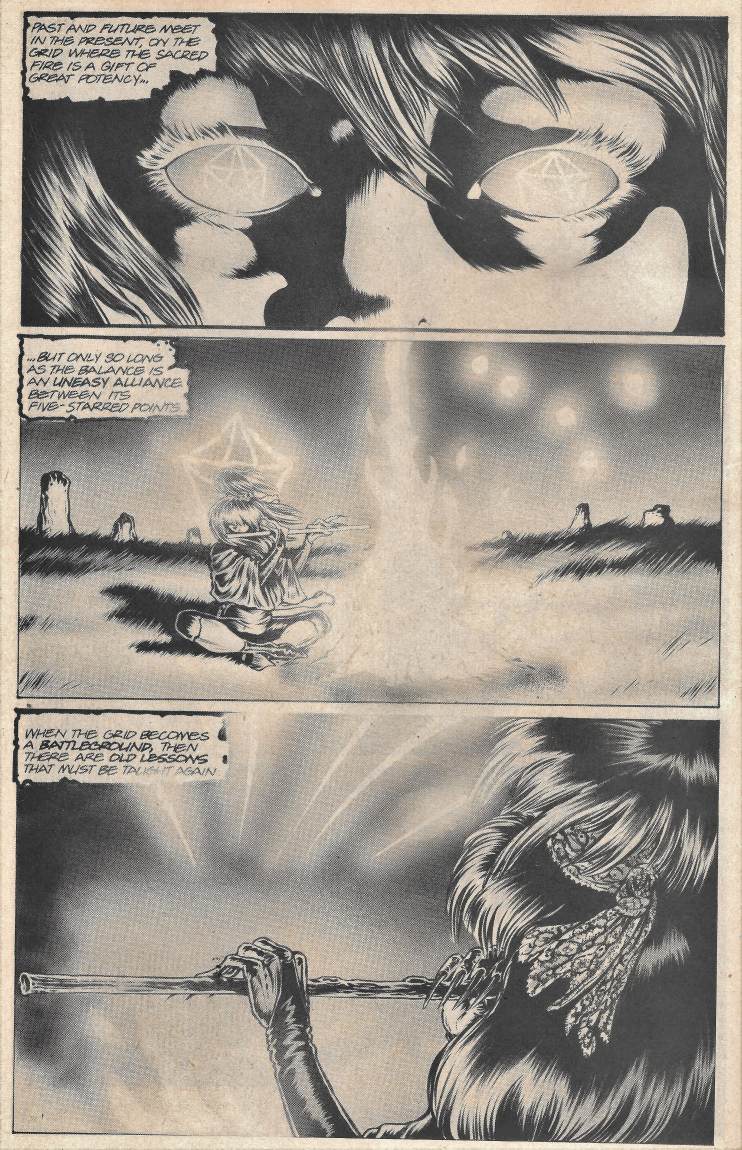 …there’s writing on these pages.

NARRATION! That’s not Warlock 5’s style. With Beauvais’ visuals who needed to actually narrate anything? And Derry would use his character’s voices to feed in clever bits of hint dropping that weren’t exposition exactly but served to move the plot along while at the same time conveying emotion and personality. You know: “writing”.

But never this cludgy, ham-fisted soliloquying about how many points a pentacle has and how those are triangles and trying to drag deep meaning from a fucking geometric shape and who is writing this SHIT AND WHO THE FUCK IS THIS BITCH AND WHY DOES THE ART NOW SUCK AND WHAT IN GOD’S NAME HAVE YOU DONE WITH MY WARLOCK 5?!!!!

Finally a semblance of normalcy returns. We see Tanith’s house. Looks a little washed out and her in bed with…what…no that CAN’T be Tanith! 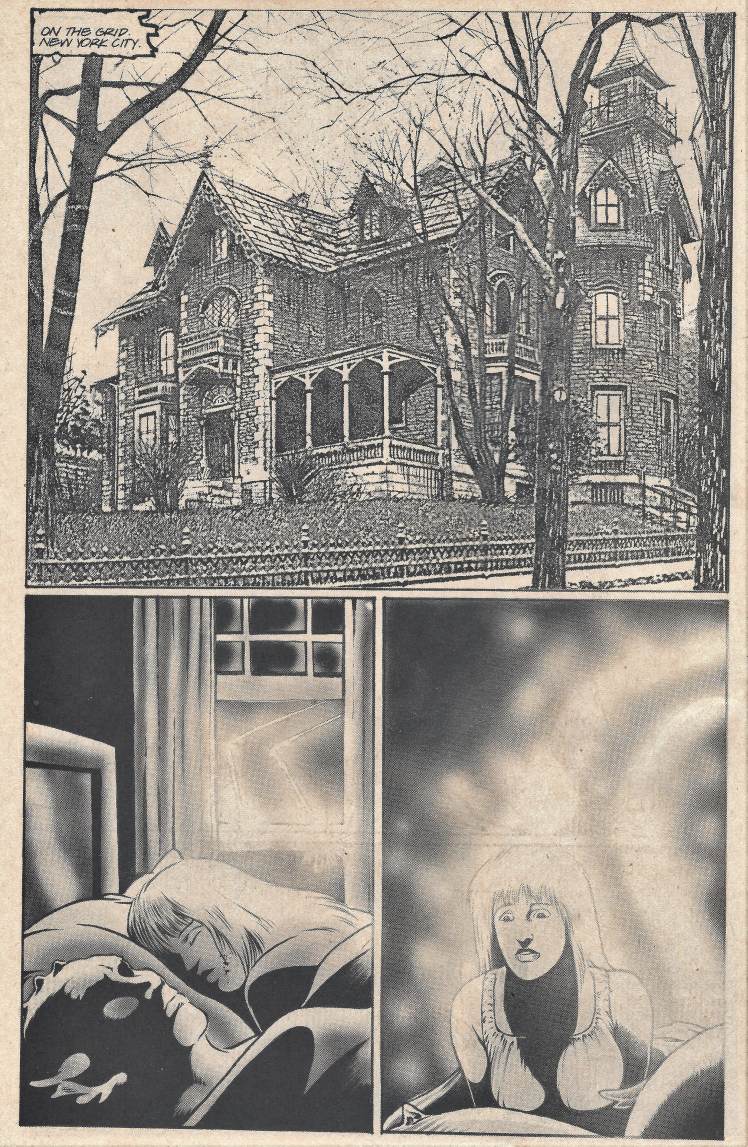 NONONONONONONONO! THAT is not Tanith! W. T. ACTUAL F! is up with the shading in the first panel? She looks like Chewbacca. And even when you aren’t showing her like that, you’ve turned her from a sexy, well-proportioned woman to some weirdly buxom, full-figured escapee from a teen slasher flick. Not to mention the fact that you can’t keep her shape consistent from panel to panel. 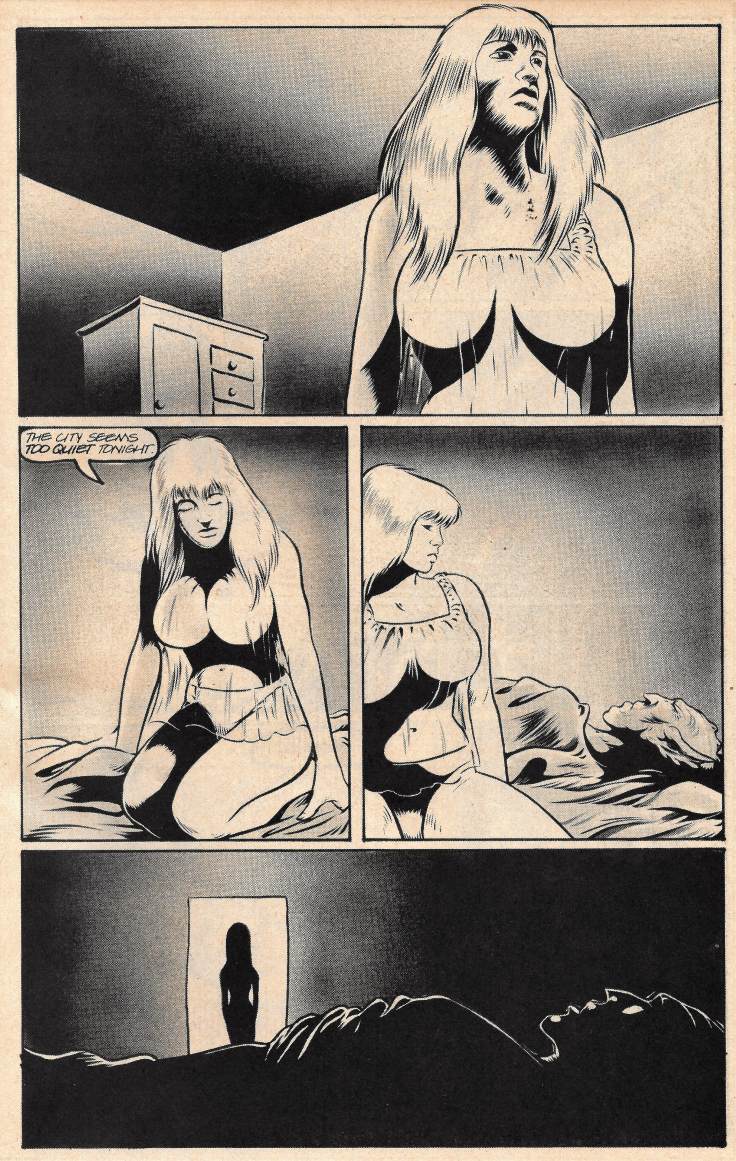 There are moments when I stopped reading this and went back to the cover, dug out my old books to see if someone had pulled one over on me. Oh, they had, alright! Just not like I suspected.

Tanith, looking as close as she ever will to her “old” self of one issue ago, sees the druid chick in the mirror… 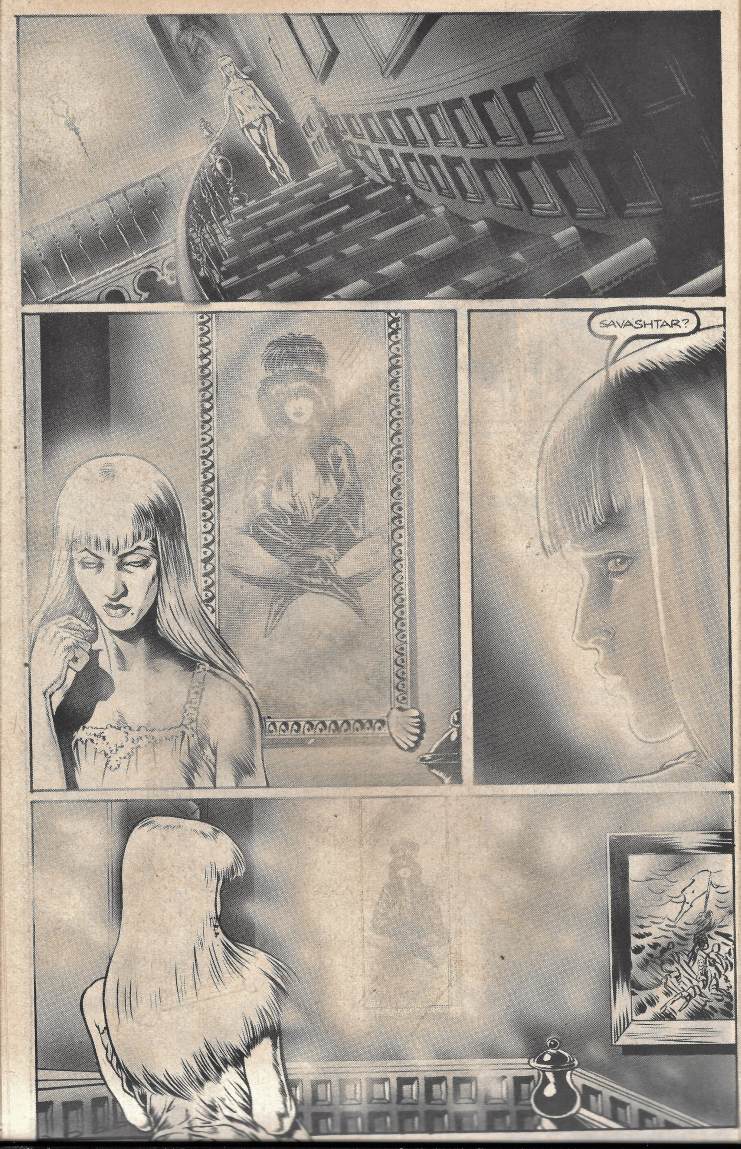 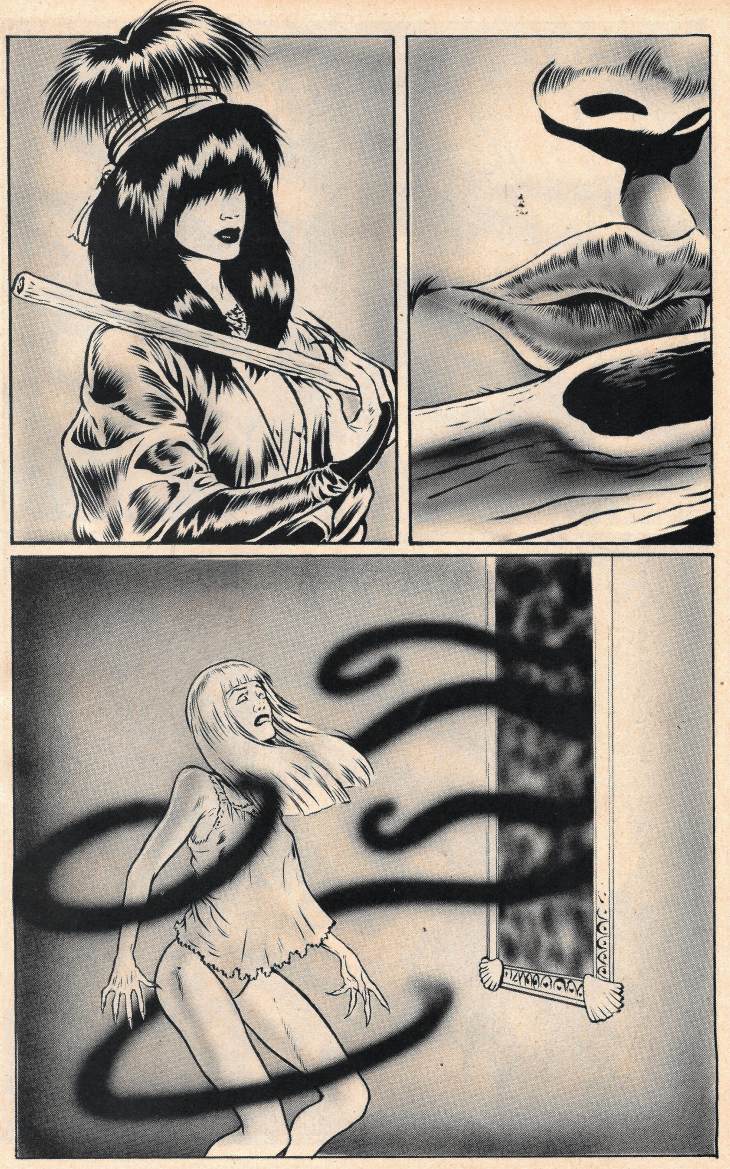 …and continues on for a FULL PAGE for no goddamn reason… 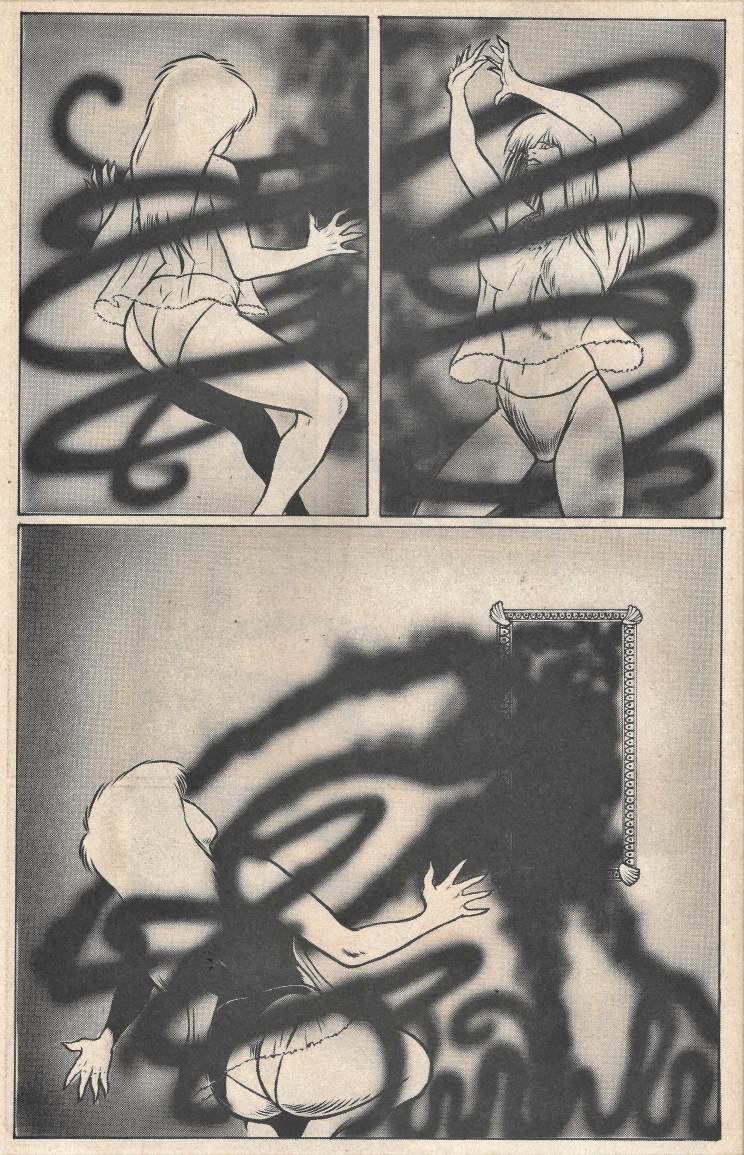 …before vanishing after Tanith says some weird shit about other people driving her to fight and there being strength in peace. She’s then broken free of her reverie by a call from the bedroom FROM… 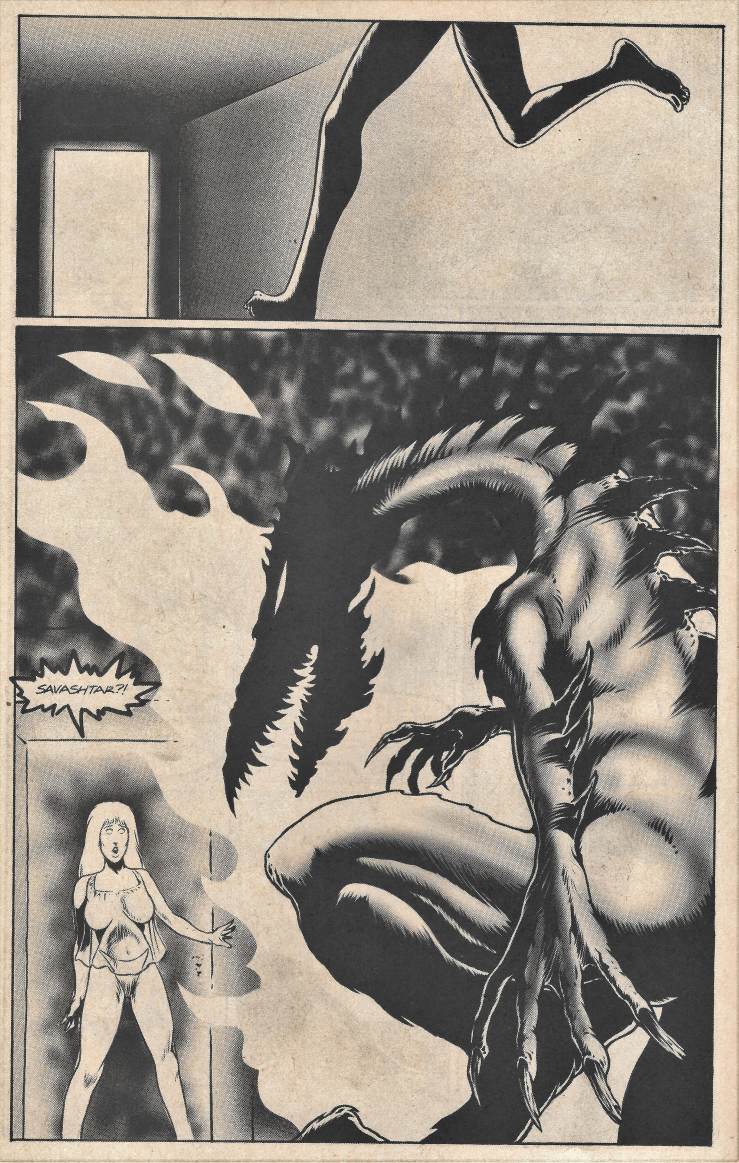 …this laughable attempt at drawing Savashtar. Look at that poorly proportioned arm and terrible weird head to body ratio. Note that the walls in this hallway are empty. That’s the problem with a bunch of this, the details in both plot, story, characters, backgrounds, and emotional conflicts are missing. Everything that made the book special is gone. I paid $1.70 for this one back in the day. X-Men barely cost a buck and I paid seventy cents more for this child’s attempt at art and story. I mean look at this: 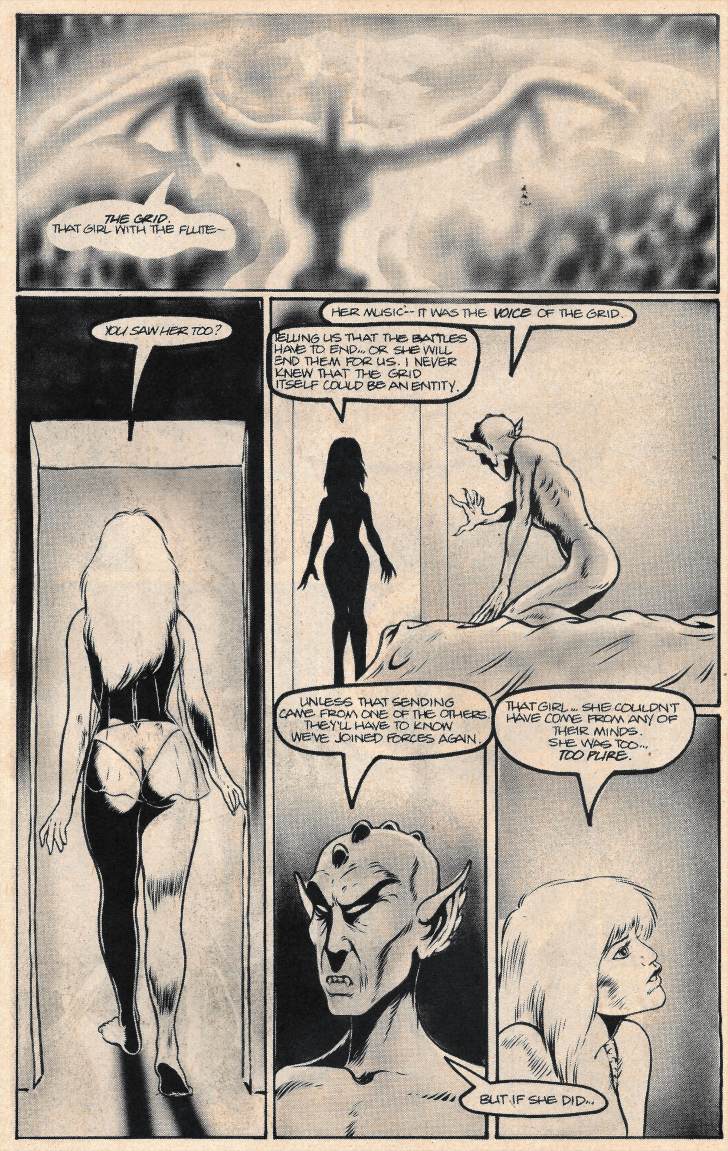 They turned the humanoid Savashtar from this imposingly tall figure, like a grim and enigmatic Leonard Nimoy-type, to this trollish pipsqueak with the face of a bad fantasy goblin mask. They ruined him. Totally. 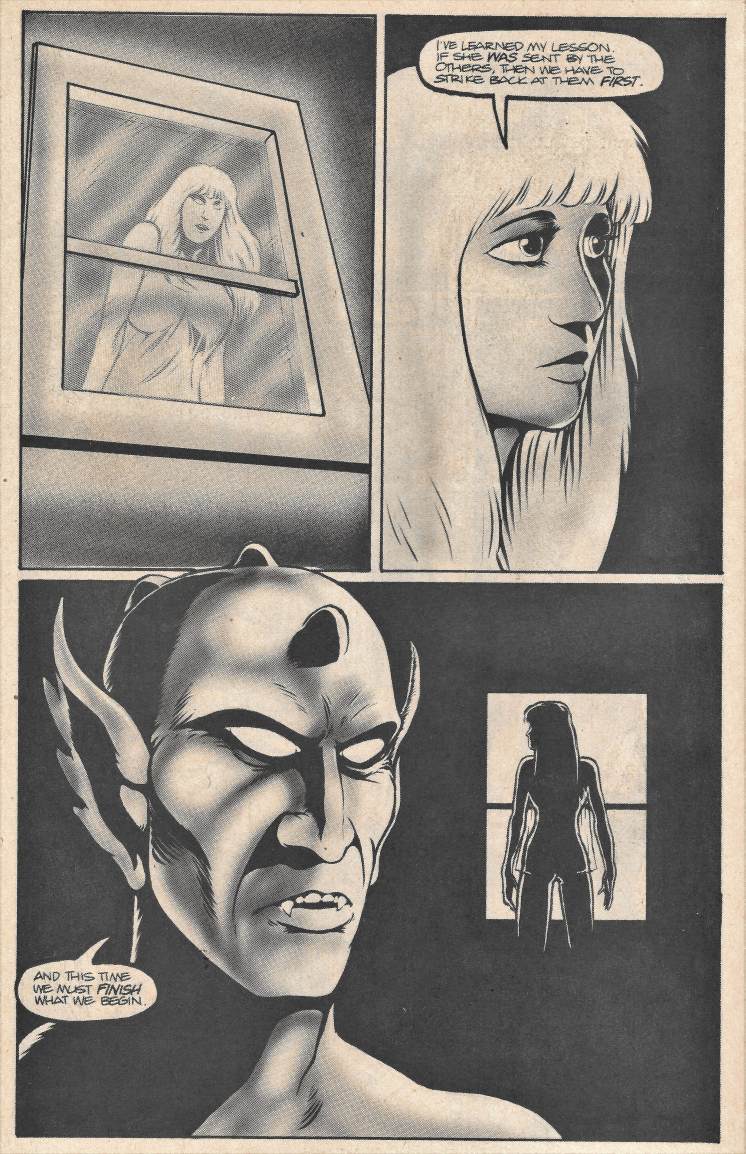 Not to mention that by displaying him so causally they destroyed all of the mystery that Beauvais developed by showing him in a trench coat and hat or partially covered all the time. The faces and empty backdrops are again rudimentary and simplistic.

And the story is one note as well. Magical druid flutist who we have never seen before but has some kind of power over the grid visits each of the warlocks and antagonizes them in some way. First Tanith and Savashtar… 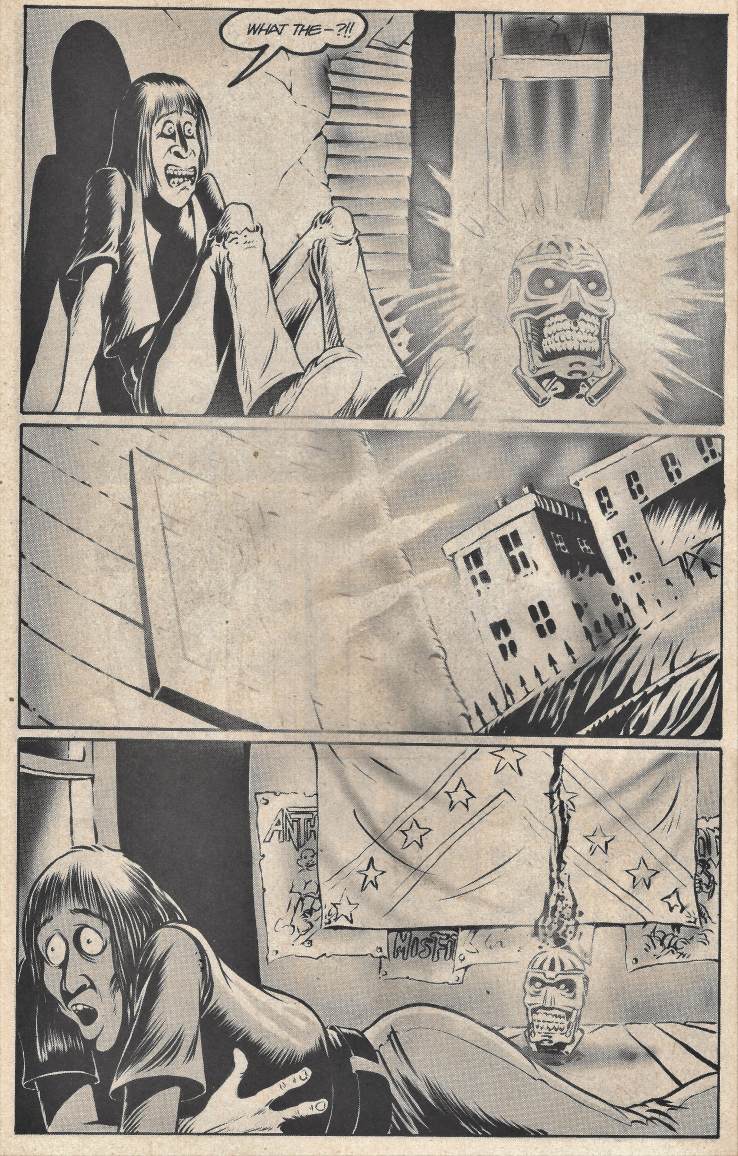 ..then the head of Argon with his new stoner drop-out friend, which is interpreted by the machine intelligence as some kind of attack… 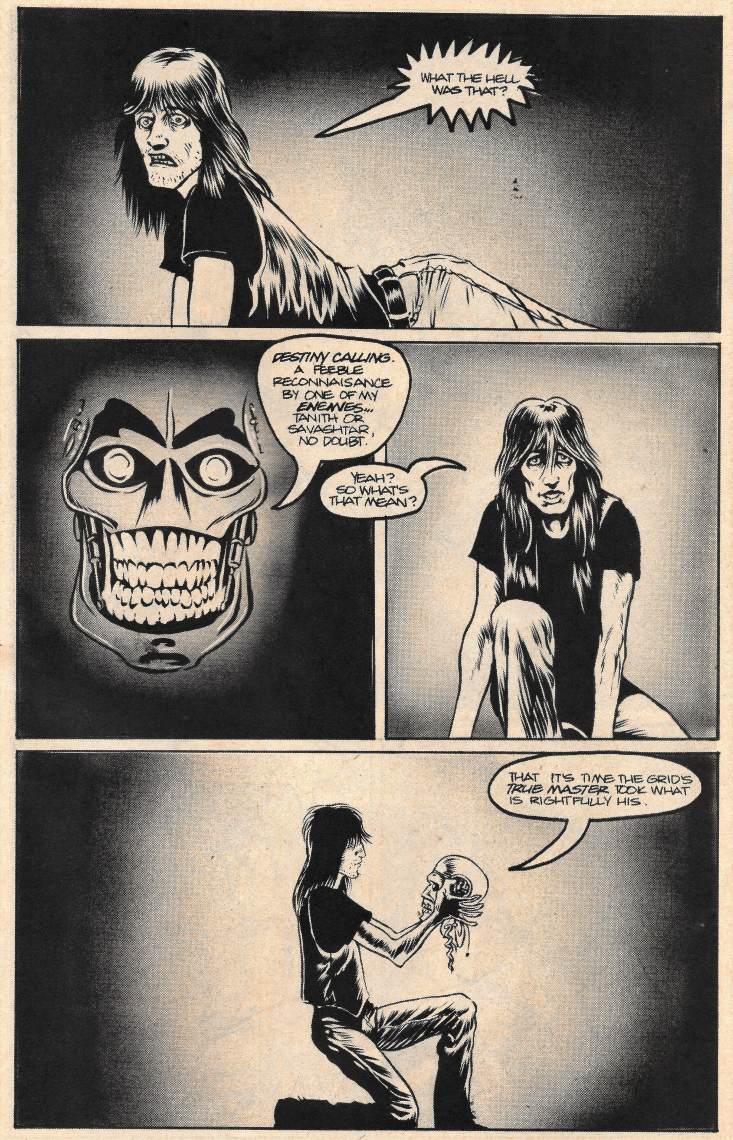 …and finally, Zania and Doomidor, who are having a pow-wow at the moment… 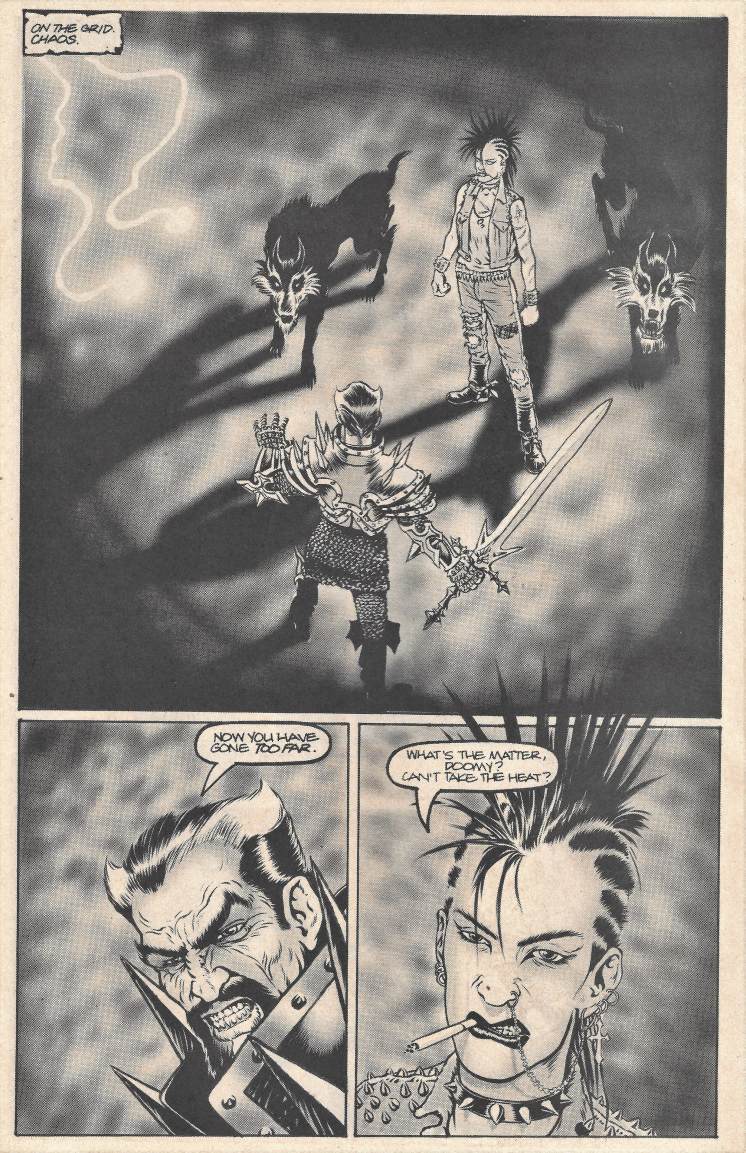 …and not really a friendly nor well-drawn meeting ... 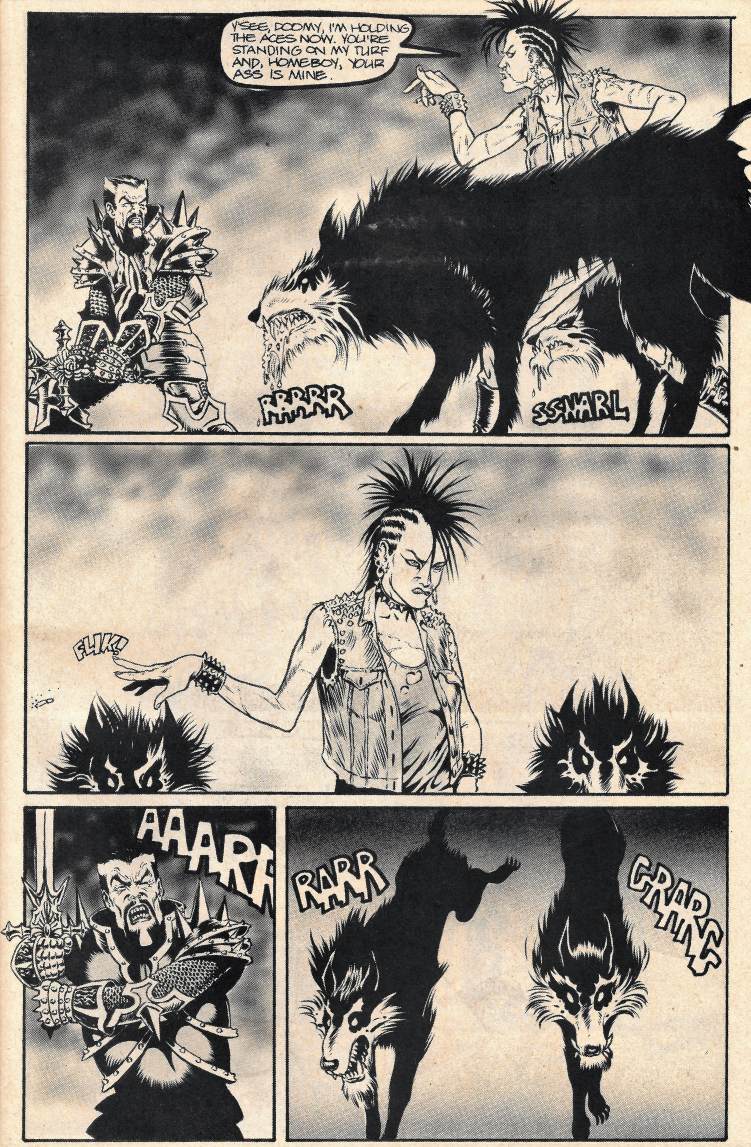 …but one that the strange chick interrupts. 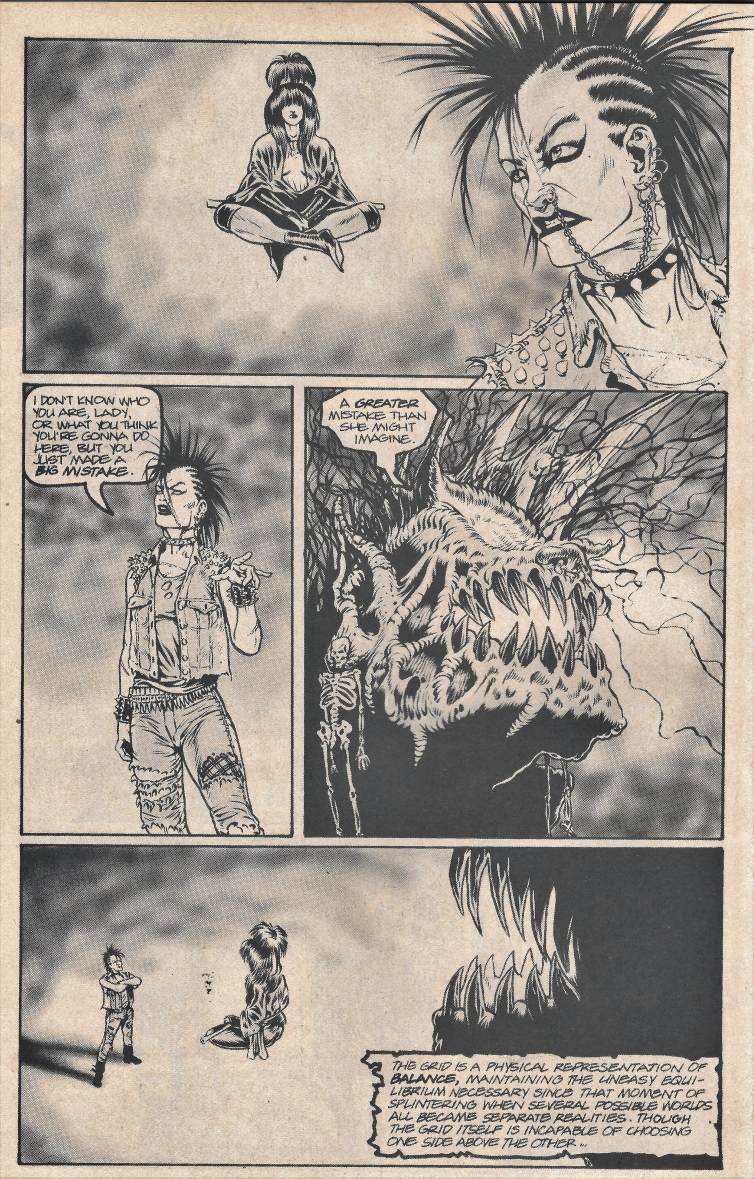 We get several names for the floating flutist, not that we care… 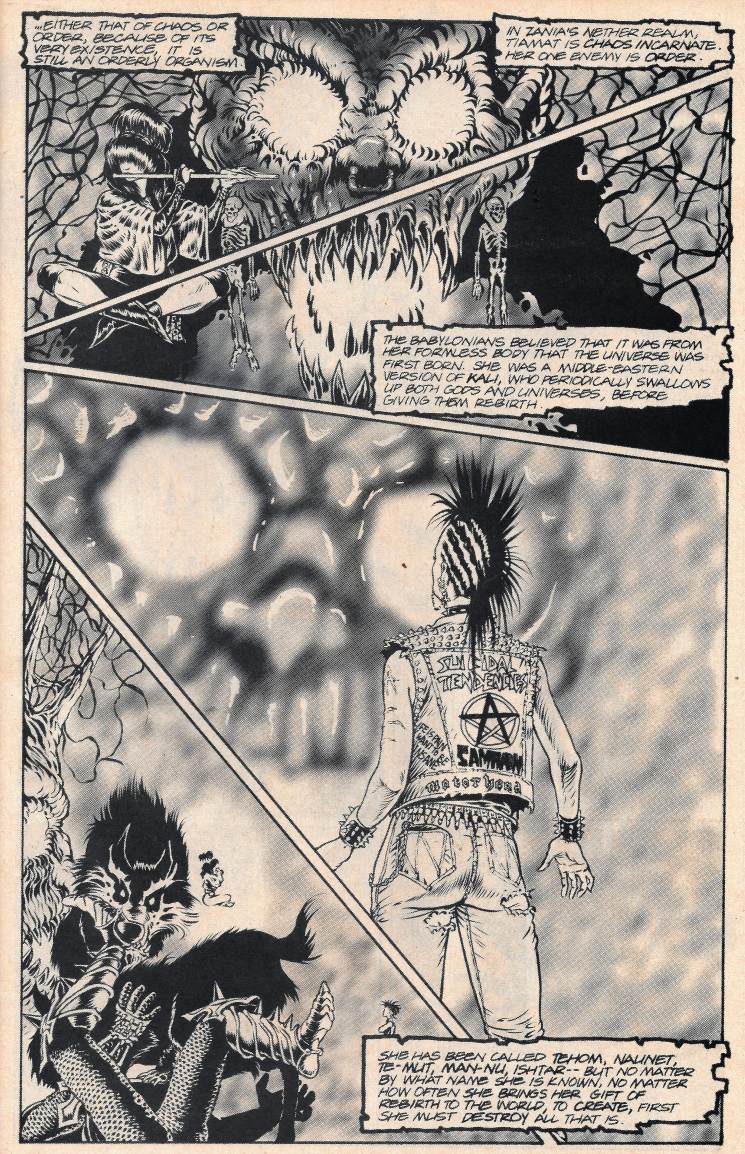 …then Zania and Doomidor seal a pact to go against Savashtar, Argon, and Tanith, which I kinda feel is the exact opposite of what the druid chick is wanting. 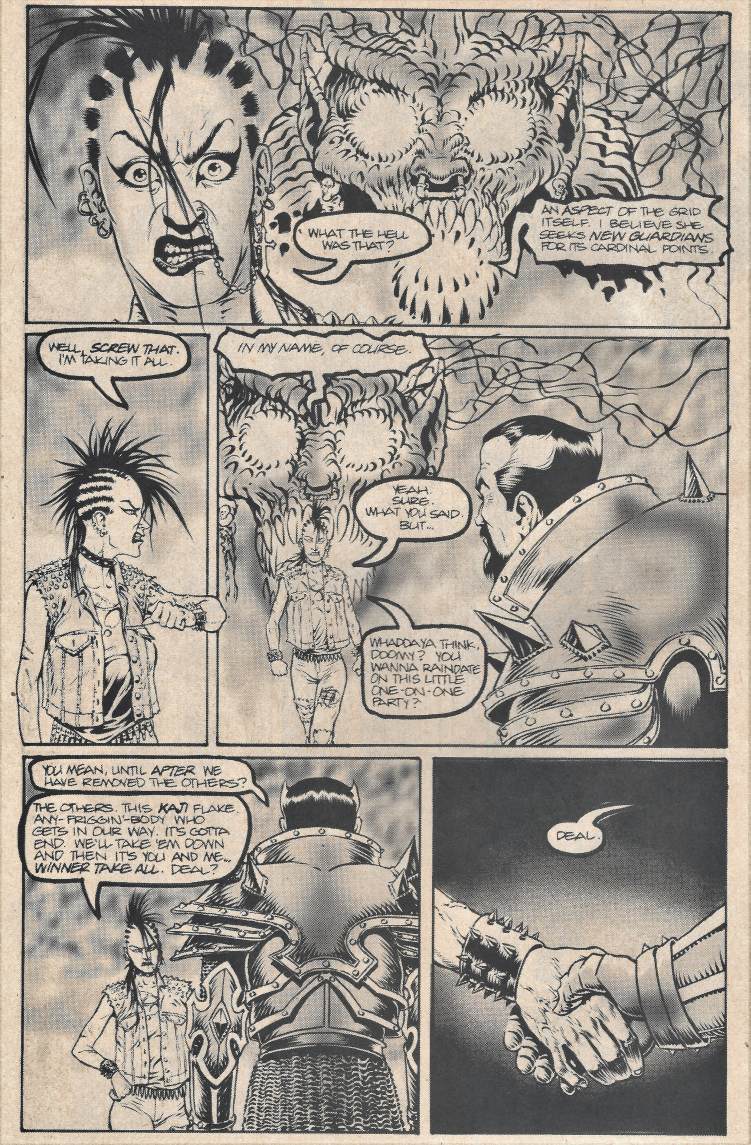 All of which at least has something to do with the storyline we’ve been reading. Then out of the blue the last page is about these cops escorting this priest with the weirdest hair ever that has no connection to ANYTHING… 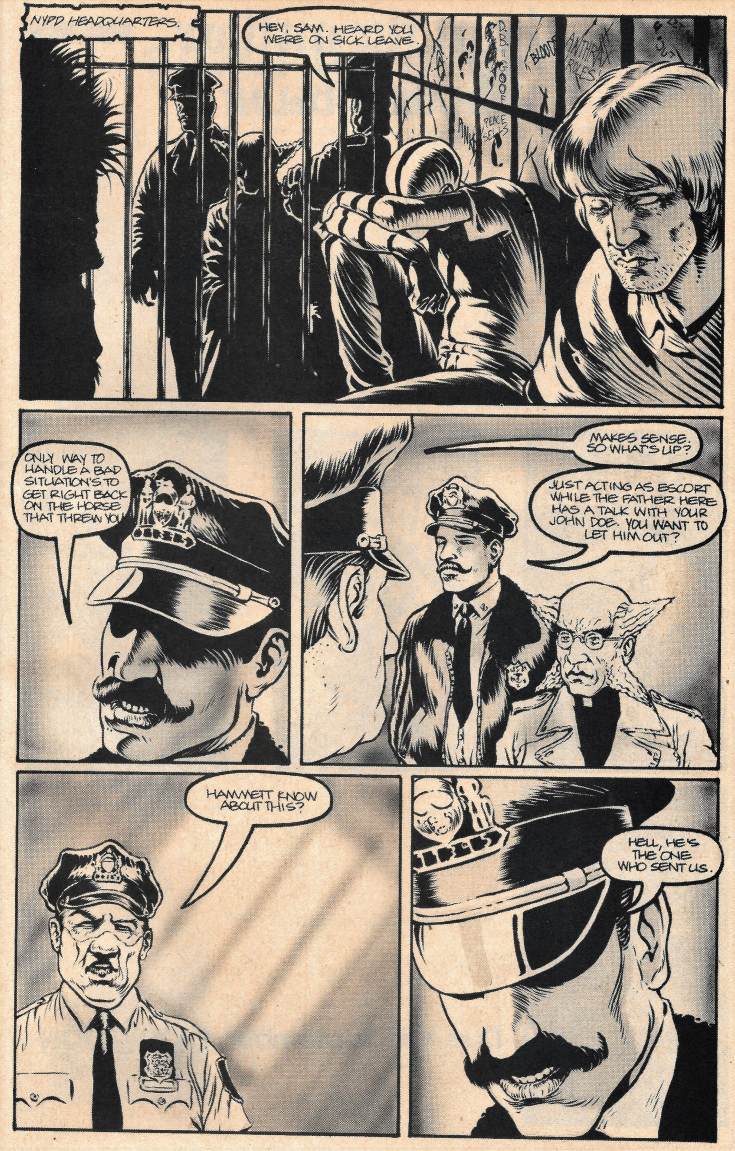 ...and then it abruptly ends.

What happened? Saving that for Part III.

The two pages that follow show us who’s to blame, though. Our writer is Charles de Lint, a novelist who has written a bunch of magical urban fantasy series that are rooted in permutations of historical myth. He seems like a solid enough choice for writing a fantasy book, but Warlock 5 isn’t something you come into and make your own. Warlock 5 HAD a voice in Derry and the person putting on his shoes needed to adapt their style to his, not the other way around. In my opinion, de Lint was too “big” a name to put in the driver’s seat of this book, but in my next installment I’ll explain why I think that happened. 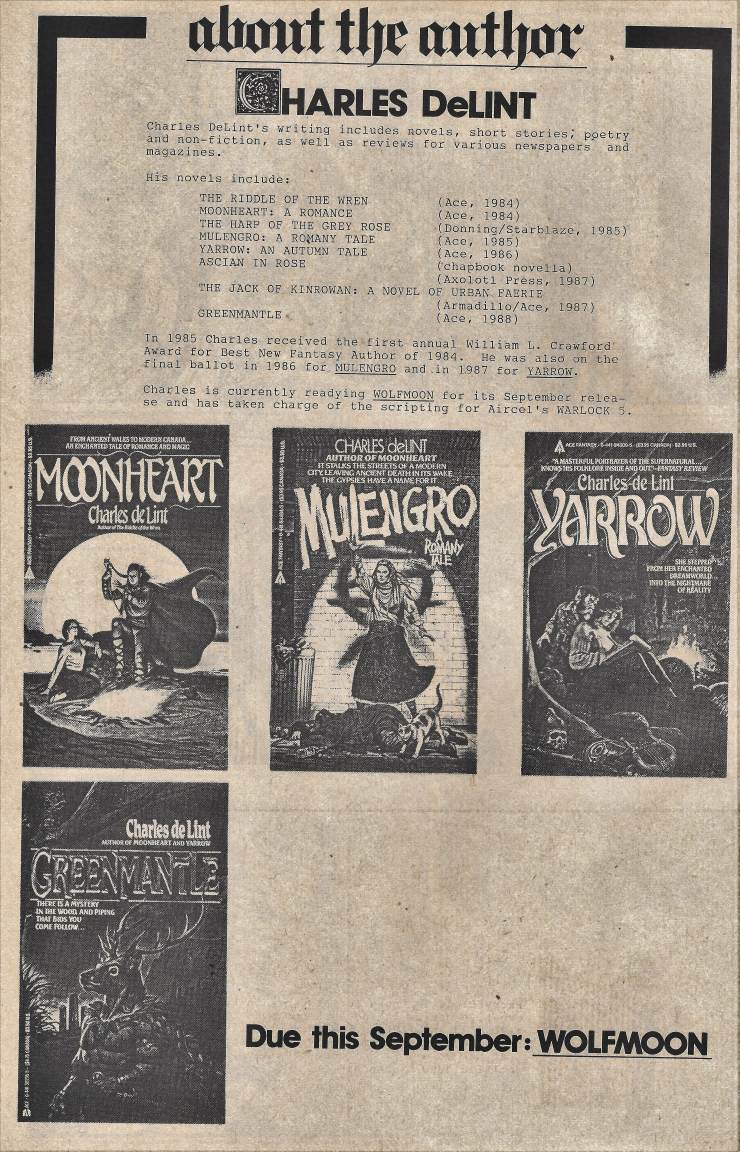 Out of the artists, I’ve seen work by McEown and Blair floating around in the Crapbox in books like Elflord and Samurai. It is all over-priced, subpart art that is both uninspired and dull. There is little detail or backgrounds to their standard panels and the layouts in this book show how characters doing absolutely nothing can eat up gobs and gobs of page count. Neither had the nack as visual storytellers. 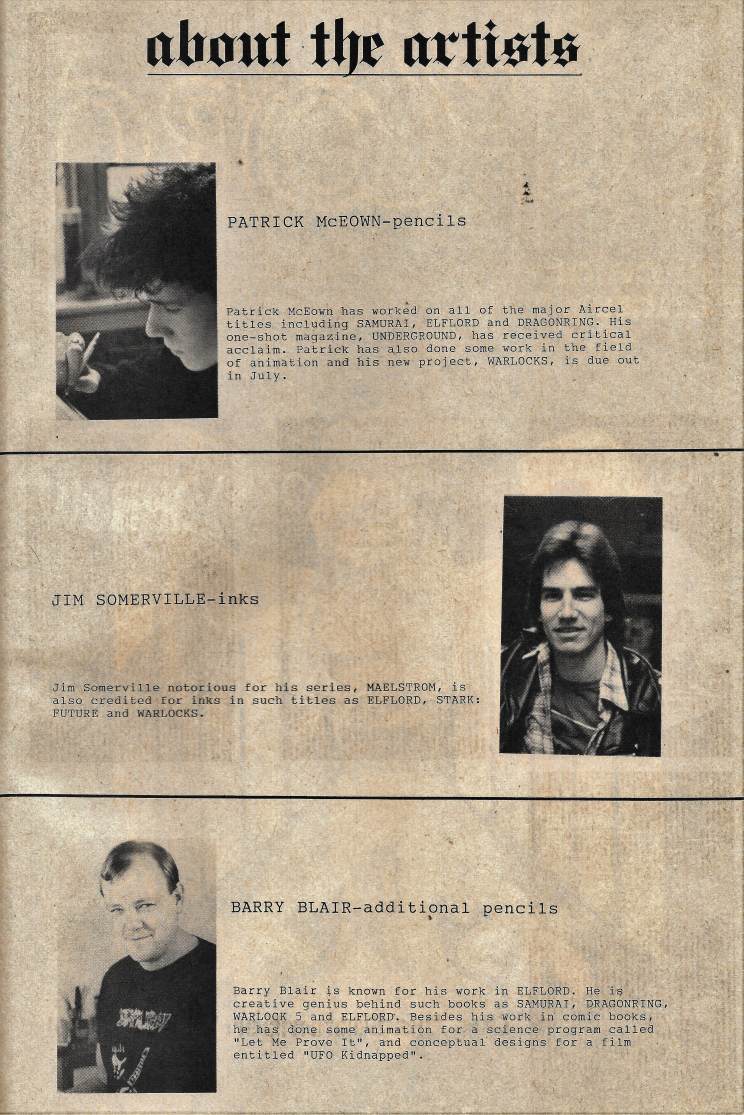 I bought this new. I bought it and didn’t know what to make of it, as I sat there with this being my last read of the week and it ending on such a bad note…

In the next part of this I will offer some thoughts on what Aircel says went on, what I speculate went on, and my upset musing on issue 15, the last full price copy of Warlock 5 I would ever buy and one that the Crapbox also saw fit to deliver to me.
Posted by SonOfCthulhu at 3:04 AM