Earthlore: the Reign of the Dragonlord #1


Fantasy February and Magical March!
Earthlore: the Reign of the Dragonlord #1 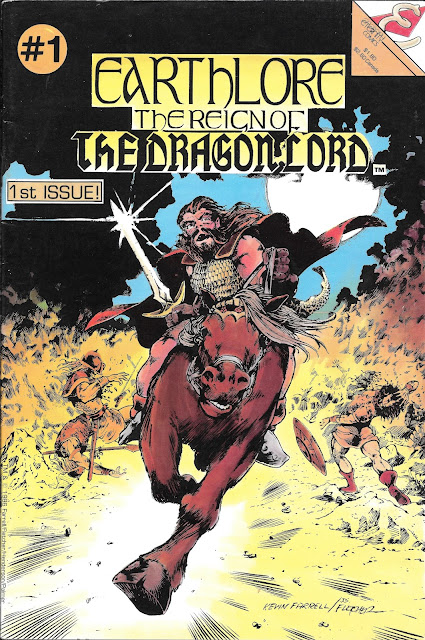 Eternity comics started in 1986, financed by Scott Mitchell Rosenberg. Rosenberg jumped into the comics market at the age of 13 by starting a mail order comics company. By the time he had graduated college, he ran the Commerce, California-based comics distributor Sunrise Distribution, back when there was more than just Diamond sending comics around the States. Using income from his distributing, Rosenberg founded Malibu Comics and financed several publishing ventures, including Eternity. And while Rosenberg saw fit to discontinue many of the other ventures, Eternity he kept around for a while.

As a company, Eternity didn’t have a good track record. Out of its first five titles all but one was cancelled after issue number 2. Sadly, the Reign of the Dragonlord wasn’t that book. That book was Ninja and it got a whopping 14 issues. Reign got two.

Which saddens me because I think it deserved more. After a bit of a fumbled opening, the art becomes clear and clean. The story focuses on three characters and does a good bit on developing them into people you want to know more about. The book talks a lot about the adversaries the heroes will face and even if we don’t get to any of that conflict, the threat they imply, and the mystery created around them would be enough to bring people back. So what kept people away?

Cover price could have been one thing. A buck-eighty was a steep hill to climb for us used to seventy-five cents or at most one dollar for full color from the majors around then. Likewise, whoever decided to tack the Earthlore masthead to the book didn’t do it any favors. Earthlore is the magical realm the book takes place in, and Eternity had another series started in that setting a month earlier. Titled simply Earthlore, it featured a politician from the far-future who is stranded in the magical past and looks to feature the thing that Enchanted Worlds really wanted to capture: swords, socerery, and laserguns. But the covers of the two books and their stories couldn’t have been more different. Reign of the Dragonlord stays in the fantasy milieu with out any of that cross-genre nonsense.

Eternity was known for making mistakes, though. They possibly had more legal squabbles per year than any modern comic book company. From contractual problems with artists and writers, to licensing issues centered around their The Uncensored Mouse (reprinted 1930’s Mickey Mouse comics, which brought down the wrath of Disney upon them), and the ever popular Captain Harlock book which licensing rights they bought from someone who didn’t own them. Eternity lived a very challenging life. If it haden’t been for the strength and sales of the Robotech license and Ben Dunn’s Ninja High School, they might have vanished much earlier.

But here we have one of their first books, before any of these troubles and taken on its own, it’s a great start to a series. Let’s jump right in and take a peek…

I started this one off not loving it. Our first page was this full-page text introduction to the story. I’m not a big fan of these. Outside of a Star Wars crawl, very few stories begin well from an info dump by the author. 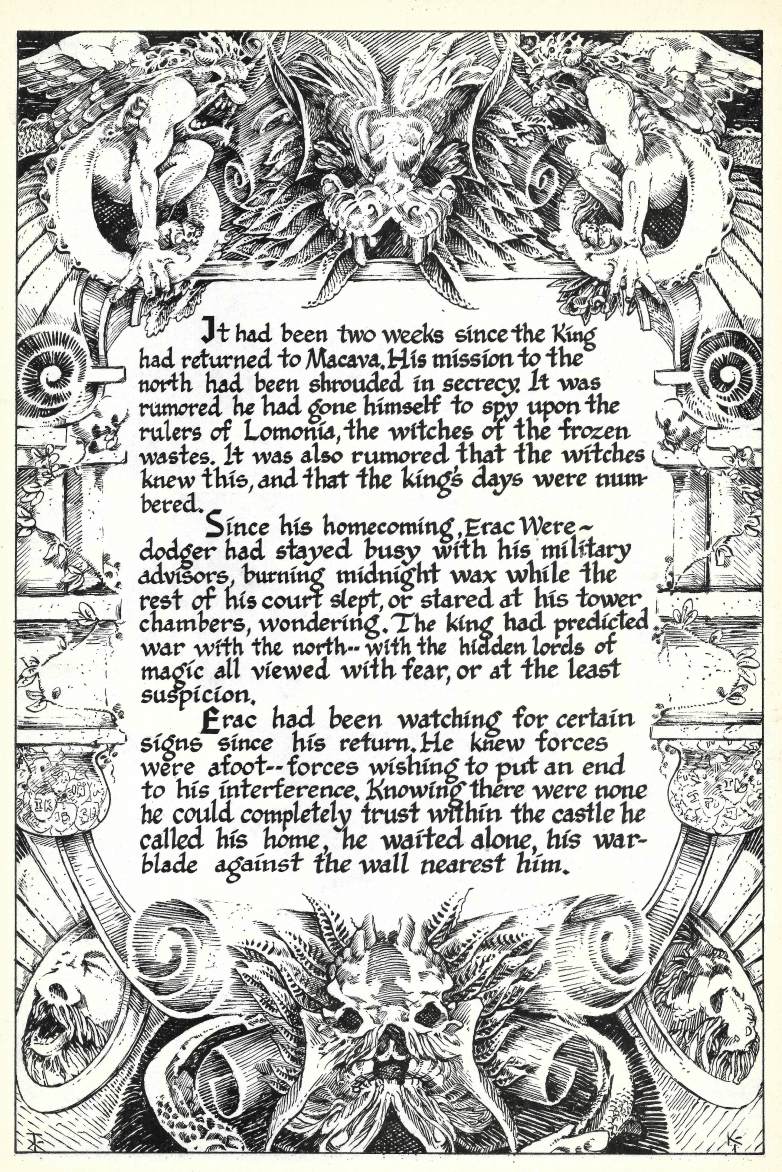 To sum up, King Erac Weredodger is worried that the witches of frozen Lomonia are plotting to have him killed, so he plans a trap for the assassin. The next two pages are the assassination attempt and its outcome. I’m going to let these pages stand without commentary. Study them and get back to me. 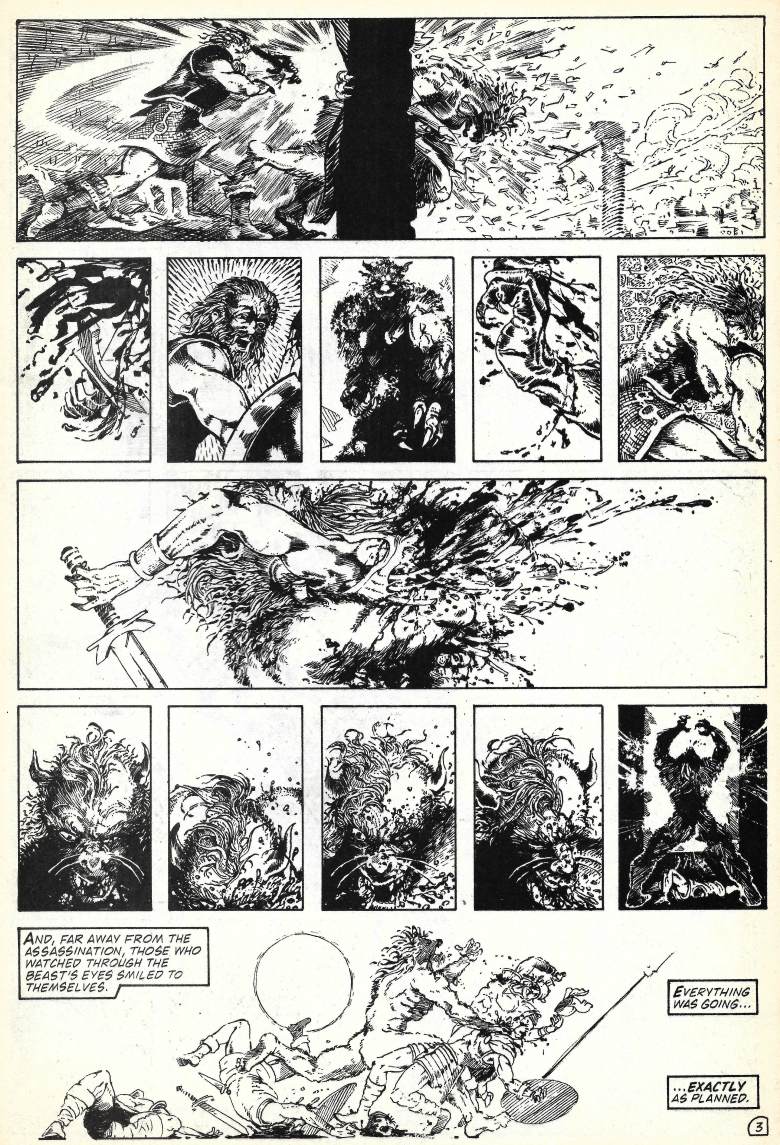 Okay, so I thought I was going to have lots of trouble after this opening. No, I can’t tell what the hell was supposed to have happened up there. I get that the king is sitting behind a curtain with a mound of pillows shaped like a body in his bed, a werewolf or gnoll assassin approaches his bedside to kill the king and then… and then… a miracle occurs ….and the king is dead at the hands of the creature. No, those tiny little fight boxes don’t do the action justice, nor make it understandable.

I though this book would take forever to read and understand at this point. But then… 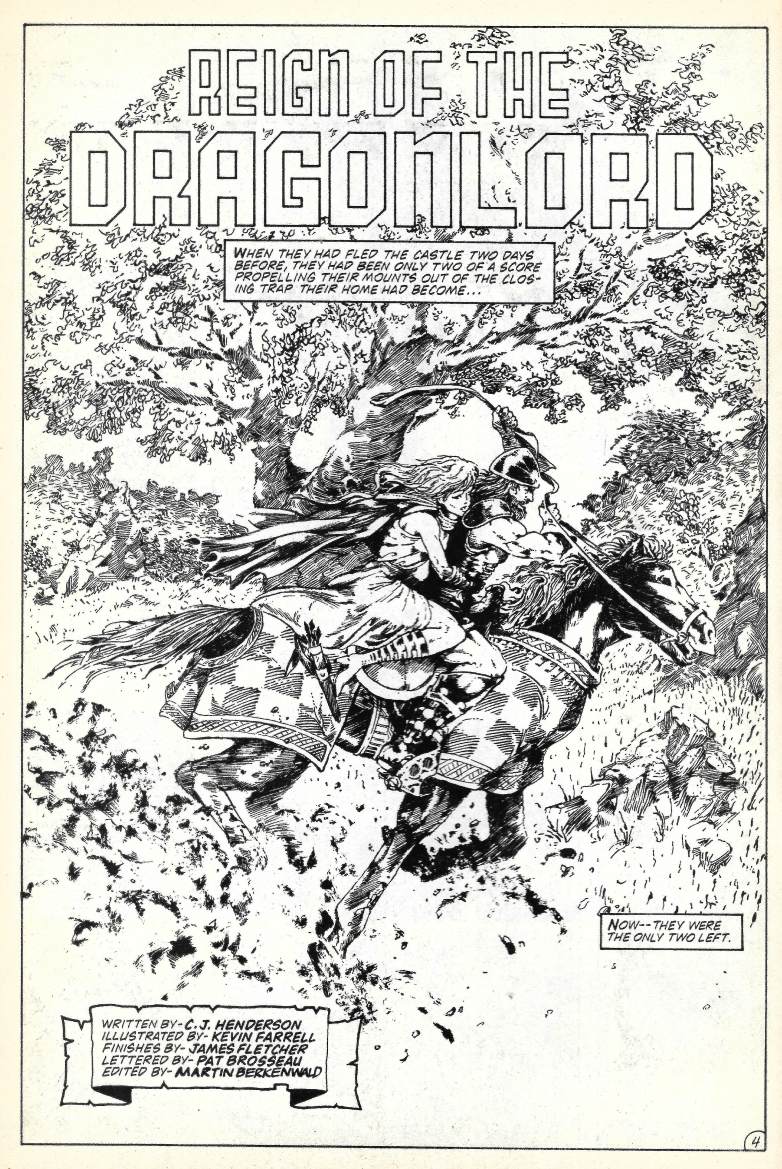 We move on to this knight fleeing with the king’s daughter and the heir to the throne. And I’m honestly impressed. So maybe if the illustrators keep themselves creating panels larger than 10 mm we will all be okay?

I mean this next bit where the princess is tossed from her horse by the knight who gives his life for her attacking a magic-tentacle-cloud is pretty clear, right? 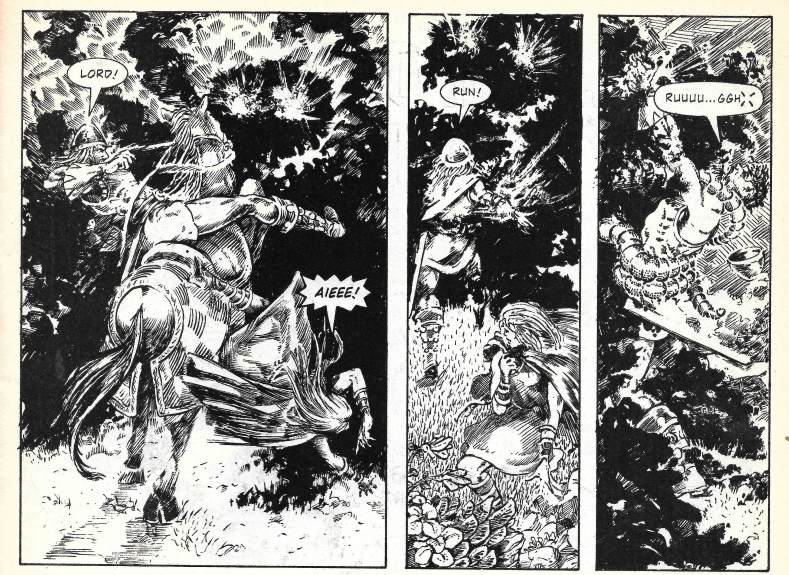 As is the part where the cloud eats her horse and pursues her through the forest. When she calls out to the rider for aid, I settled into thinking the worst was behind me… 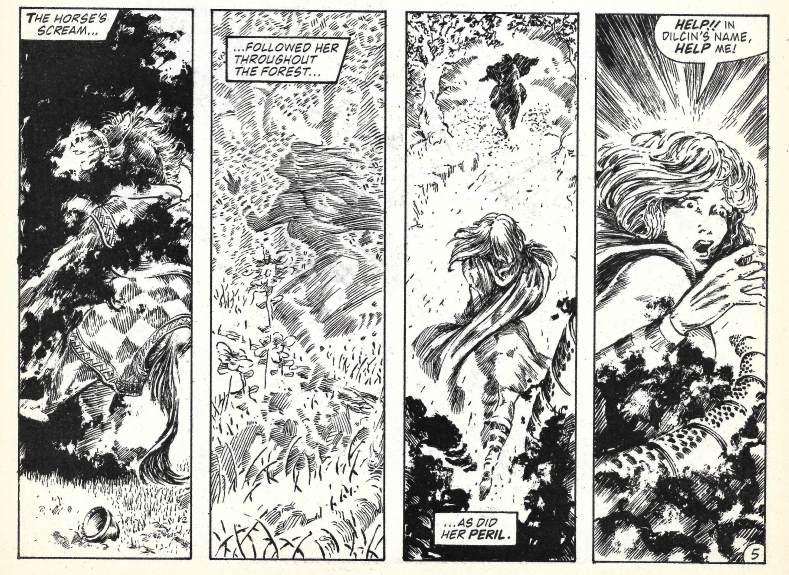 …and I was right. This is the Dragonlord of the title, but more on him in a moment. First, we need to resolve this conflict and the last bit of action the book sees. If there was anything else that might have killed this series it was lack of fight scenes. The fantasy here was a bit on the epic side and while I applaud the book's world-building pace, I’m not certain everyone would.

And the conflict we are in right now is resolved by building a fire, chasing off the cloud-creature, … 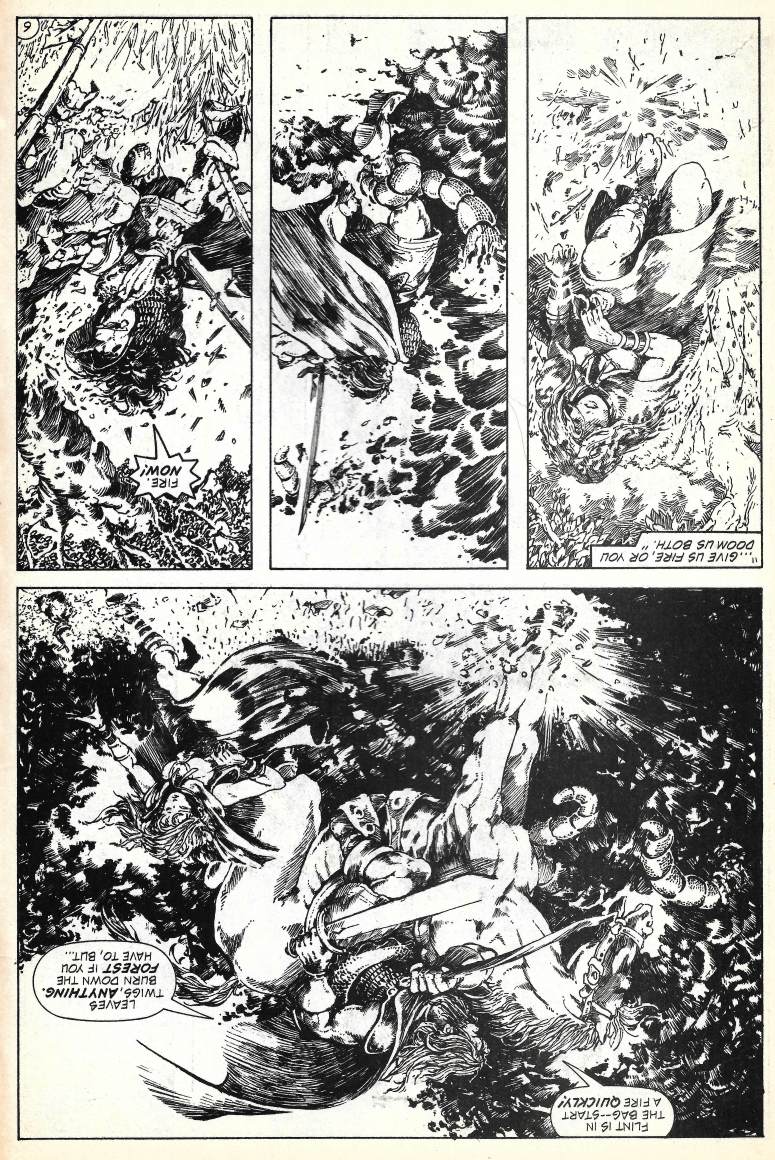 …and then the conflict becomes putting out said fire before the entire forest goes up. 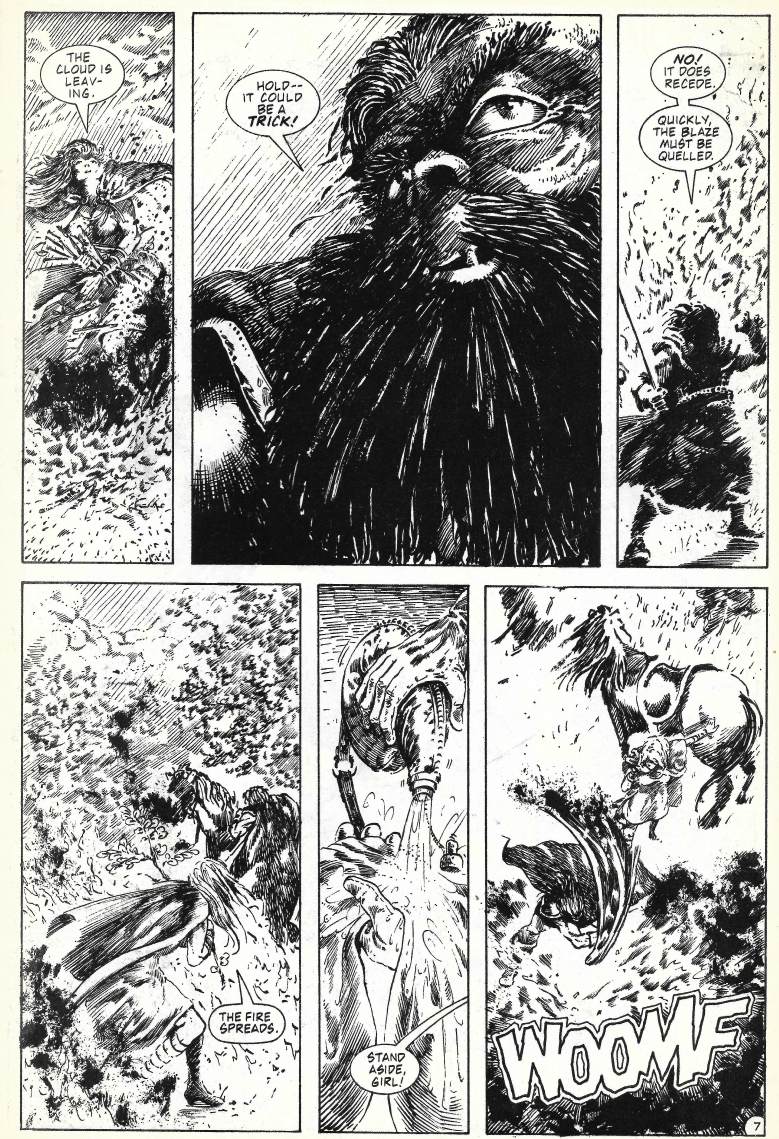 When all this is resolved, we end up discovering this is the girl’s uncle Lanhar, a half-human/half-lizard man who also will have a claim to his brother’s throne. More on that in a bit, right now let’s just discover who these characters are. They obviously care for each other in a familial way. 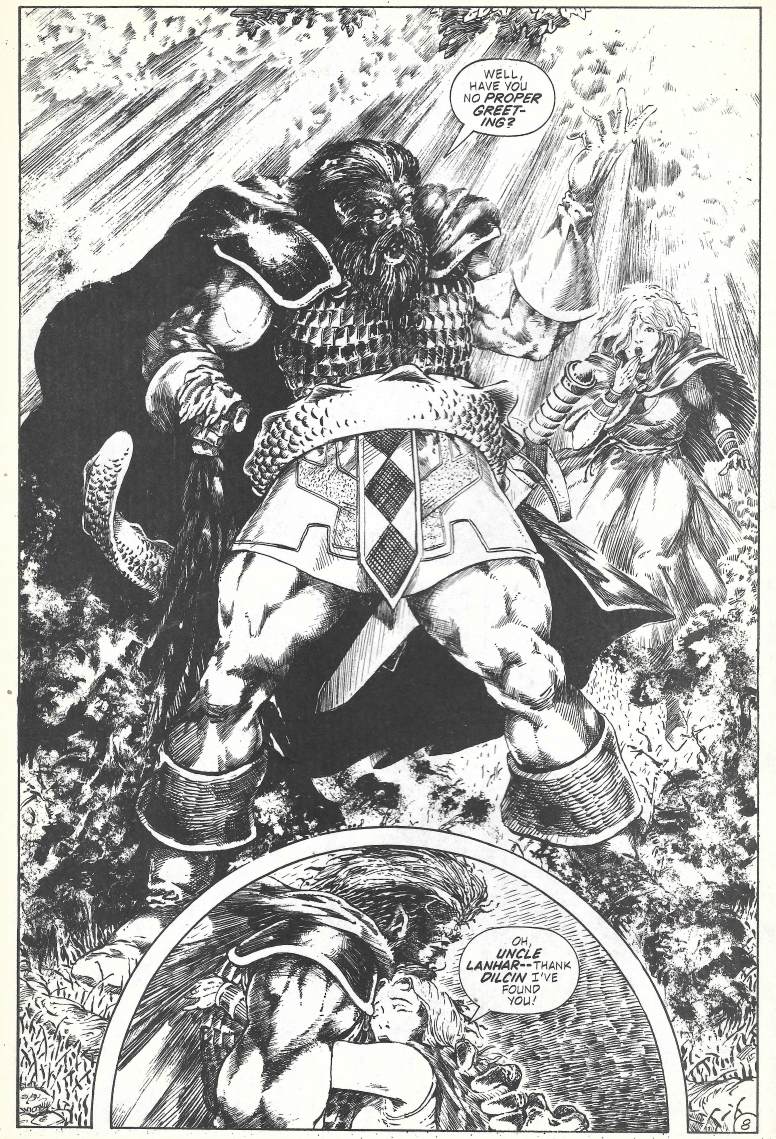 And Lanhar lives a life of pastoral solitude remote enough to be removed from any court intrigues, but still in the loop when things go wrong. There’s a ton of world-building from here on in. Names of countries, peoples and places that sadly will never be expanded on as the series got the can after next issue. But the promise of all this is exciting. In fact, if any Dungeon Masters picked up a few of these off-beat, cancelled fantasy comics from the 1980’s they would have little problem cobbling together a top-notch campaign from a few of them. 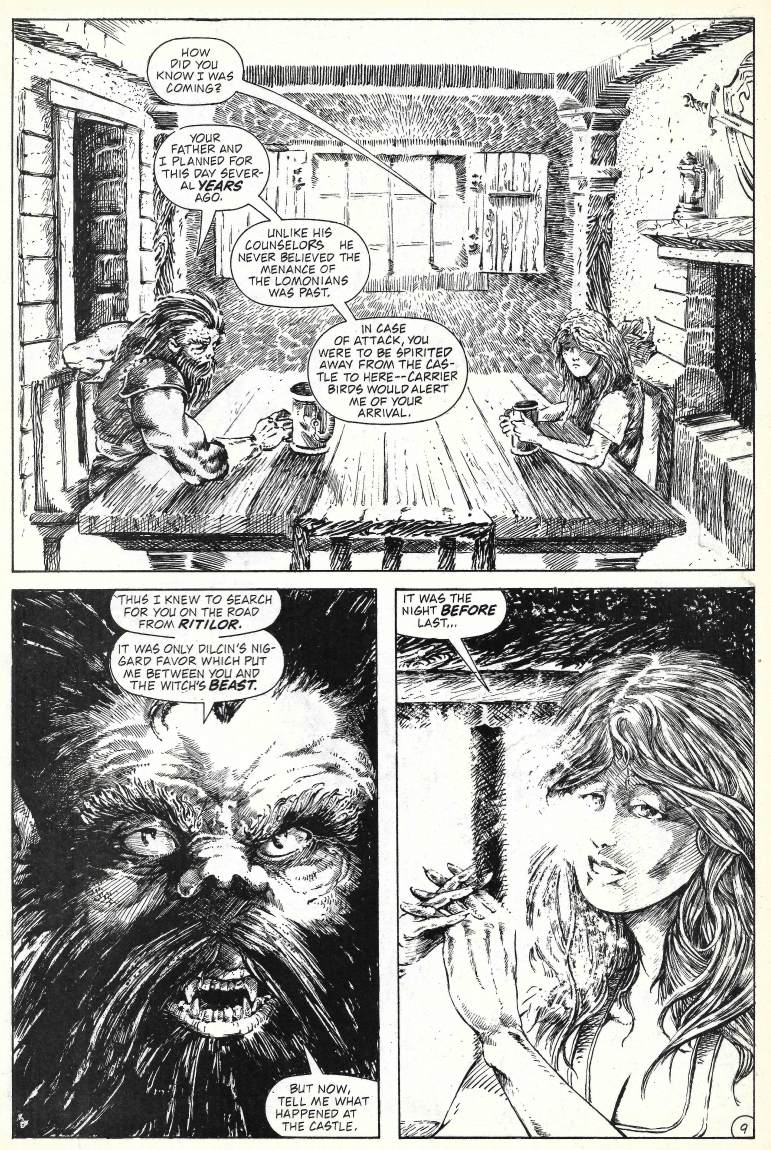 Our princess tells us of her escape from the castle by way of telling her uncle, which fills in more backstory and gives us her name: Elizia. It also shows that her uncle has no wish to take the throne of Macava, the country they inhabit. 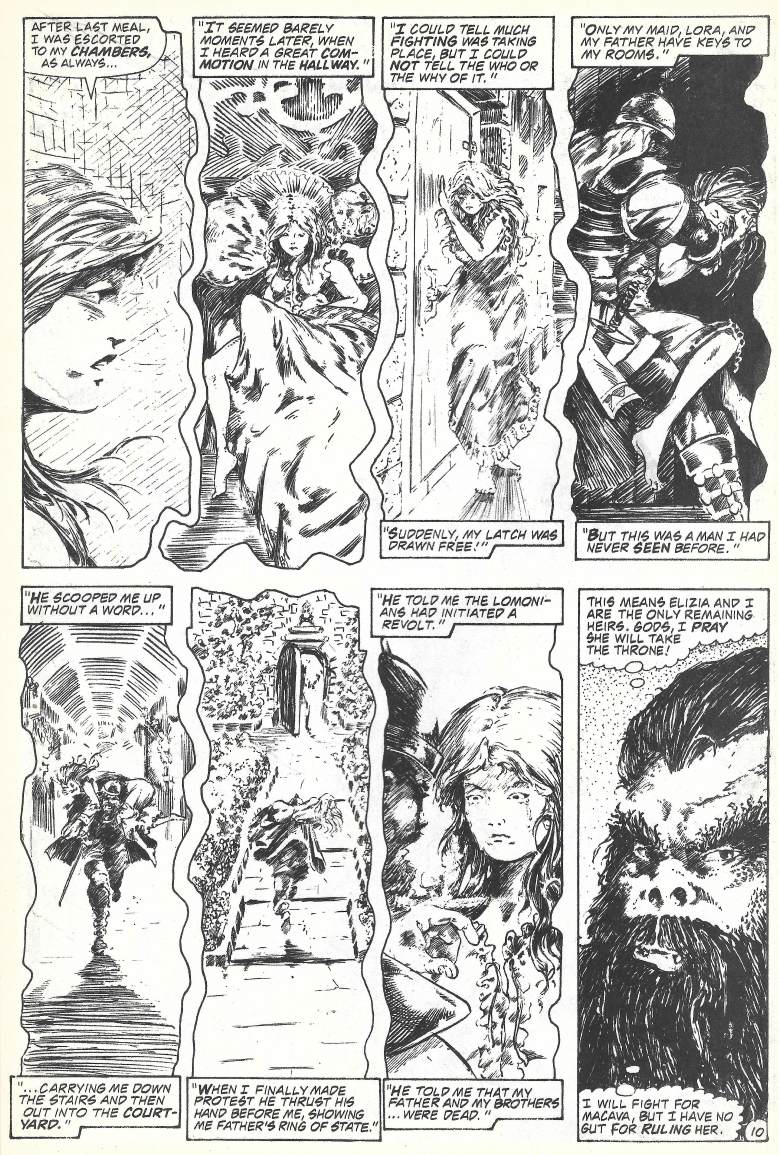 Then he sends her off to bed and grabs a last draught from his cask, lamenting that he will not be able to brew more this year, as it will undoubtedly be spent on the battlefield. The language here could be corny if not given the proper preamble, but Henderson finds a way to insert enough personal moments that the weight of the words feels real and not scripted. I admit to enjoying the dialogue far more than I expected and that makes the premature end to Reign very bittersweet. Glad I found it, but sad it didn’t last longer. 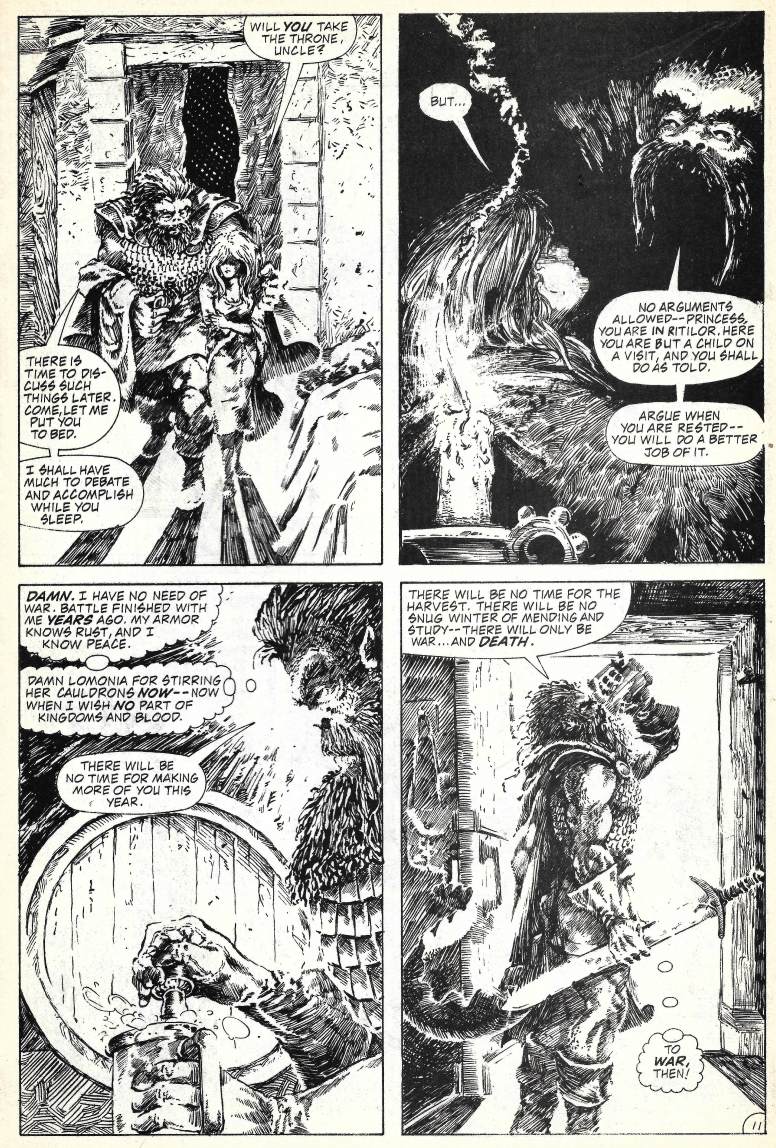 The next morning, Lenhar leaves early to tend to farm duties, perhaps even duties that include buttoning it up until he can return. This leaves Elizia to awaken to a very special guest. 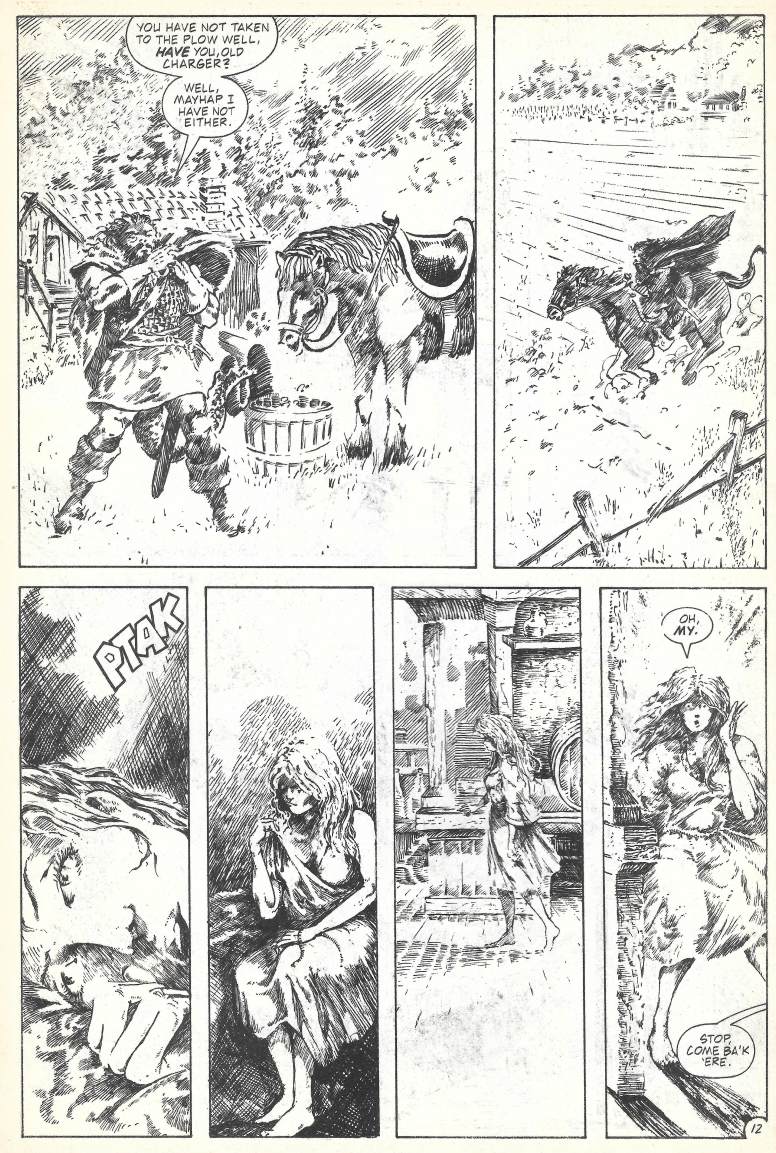 Badger! Badger? We don’t need no stinking BADGER! Except, obviously we DO and this is one of the more fun interactions in the book. 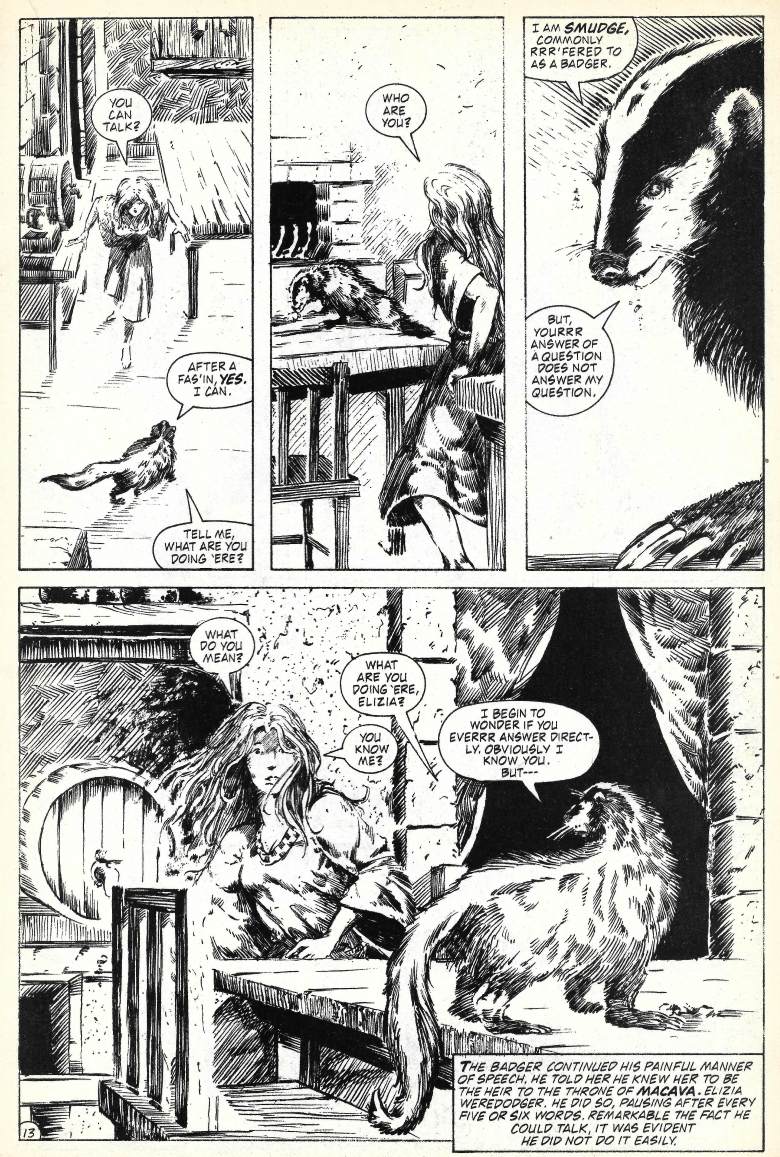 Yes, the badger is someone Elizia knows who has been transformed into an animal. “Why?” is the real question. 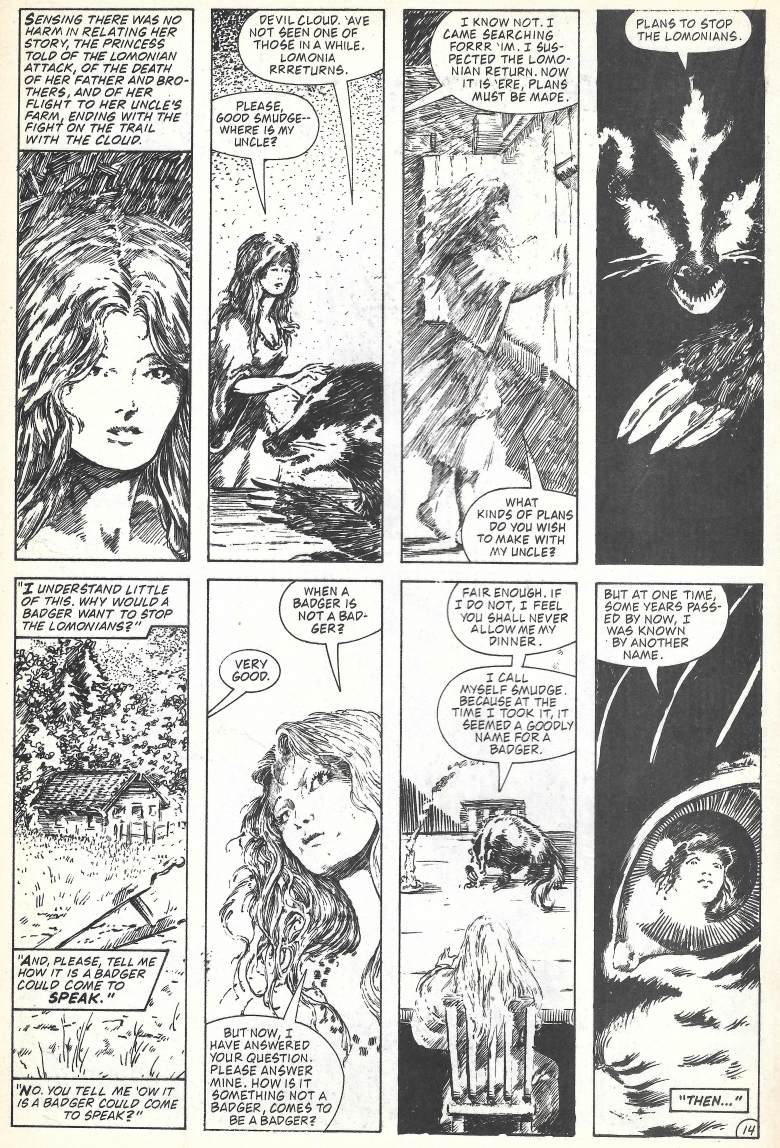 But we get the who answered first. A court sage and adventurer-friend of her father’s named Render. Render is a cool concept for a character. I’m not sure if he will be more than just a councilor to Elizia in this book or an eventual love interest. The age difference is dramatic in the flashbacks here, but the girl almost harbors a doting affection in these too. Might be my perception of all this is off, but I can’t tell what they are setting up. I DO like the character, especially… 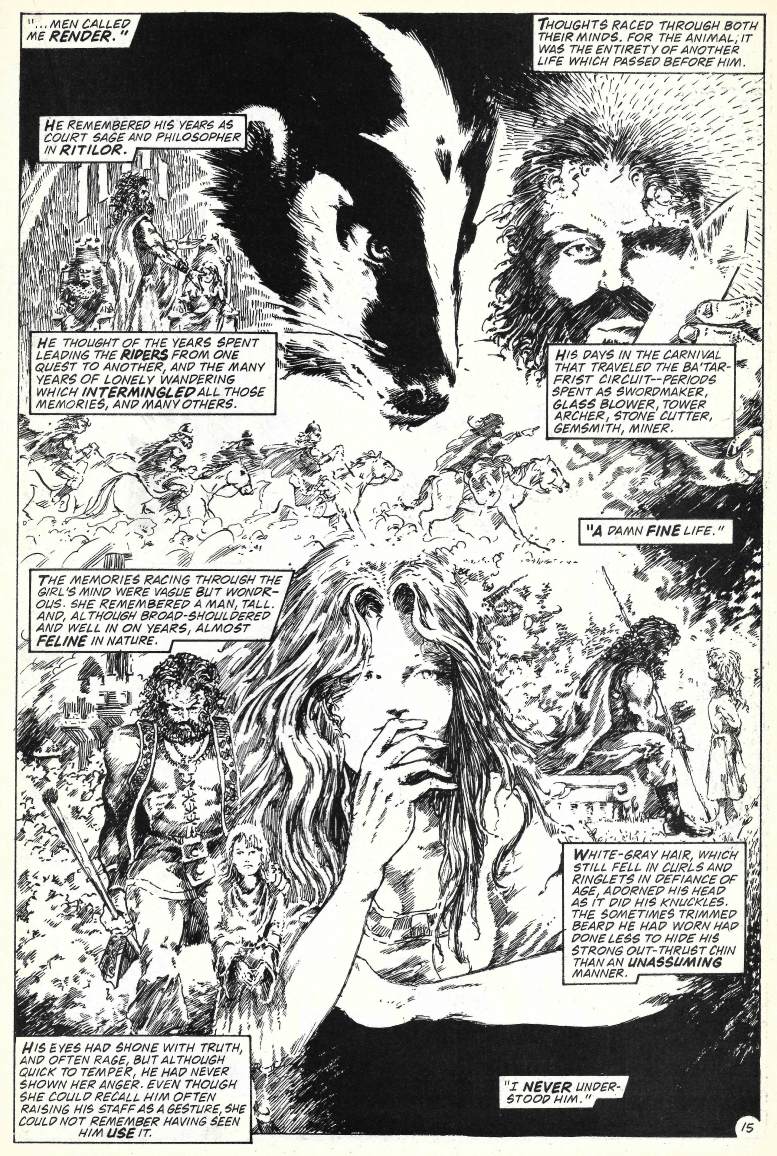 …after this line of explanation for his current state comes out. 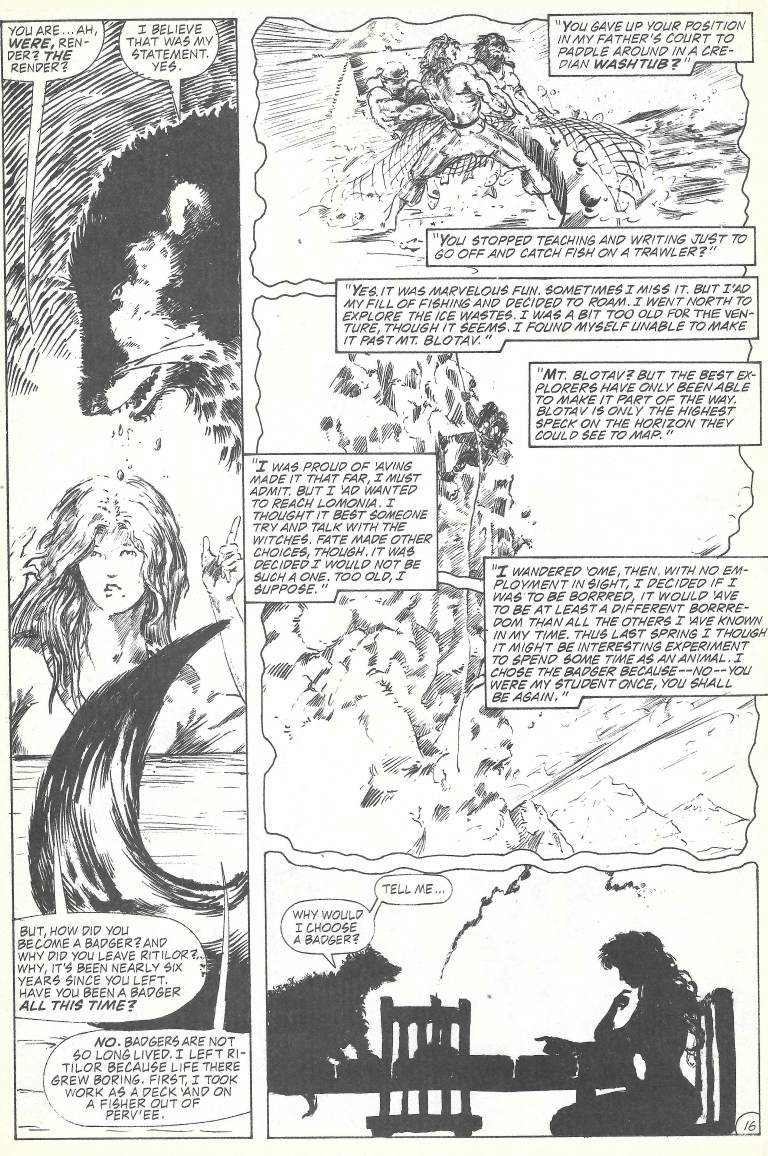 And all of it teased out of Elizia after a brief update on where he’s been since leaving her father’s employ. 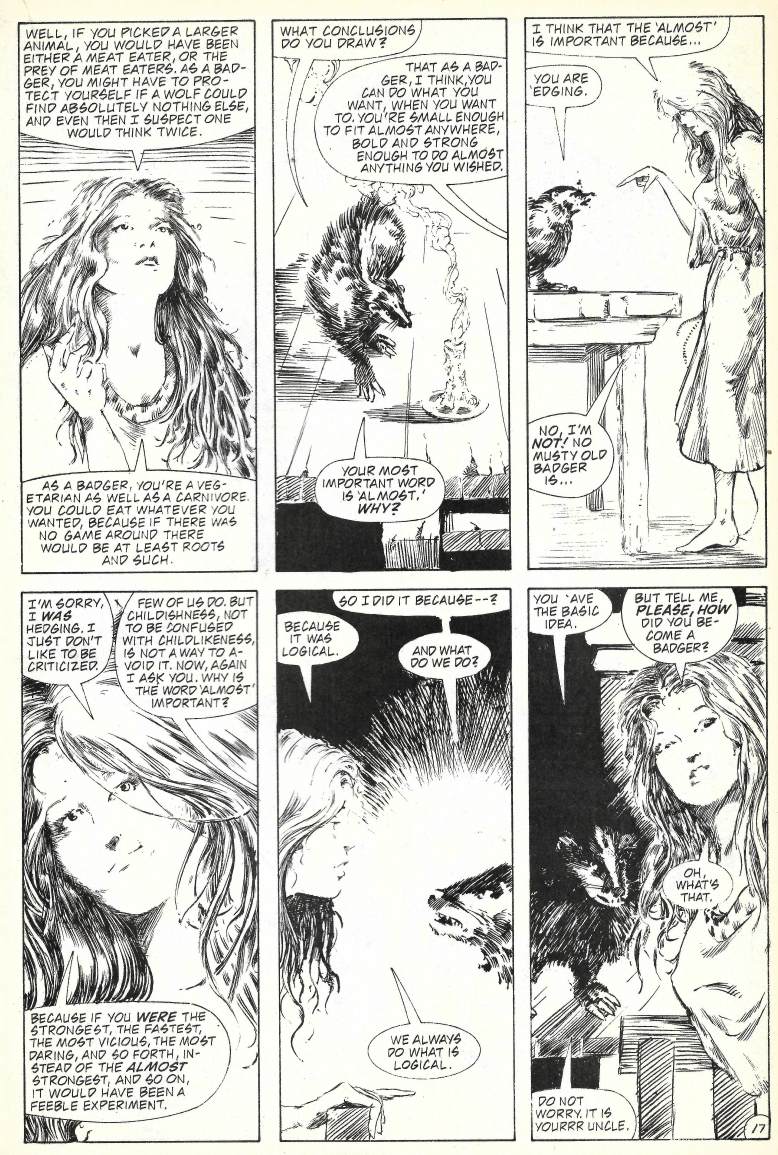 At this her uncle Lenhar arrives and we delve back into his origin story next, after pouring everyone a beer, that is. 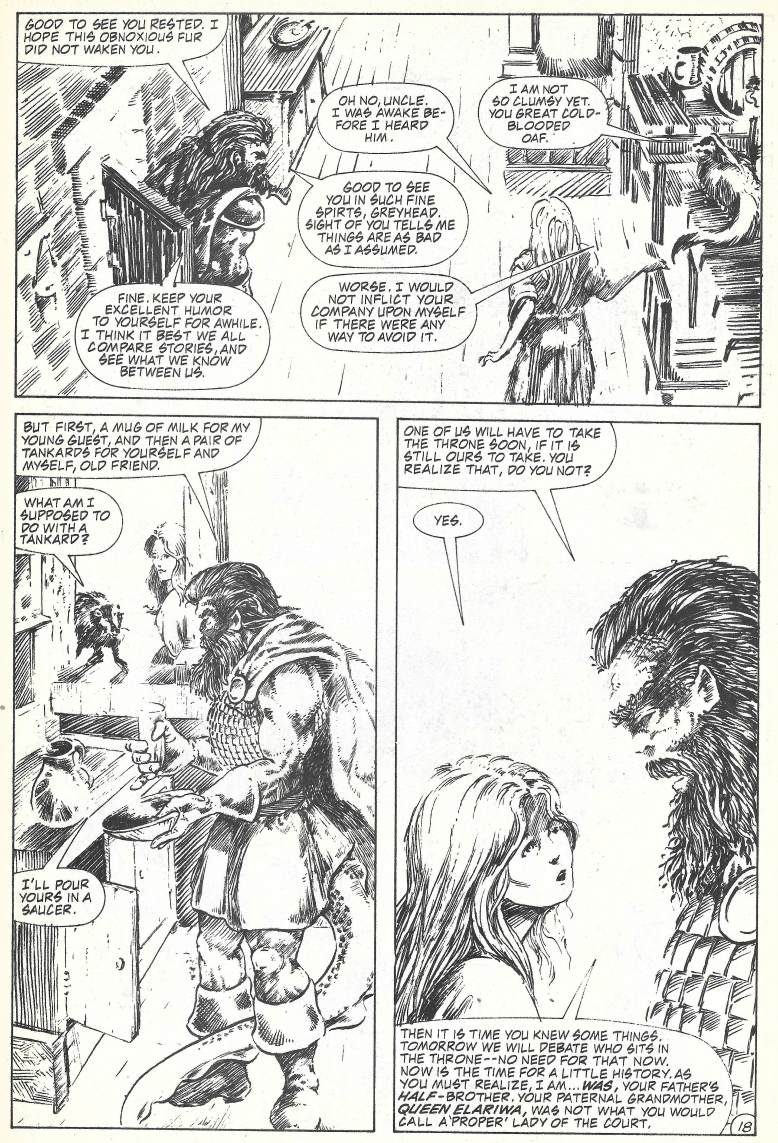 We begin the tale speaking of Elizia’s grandparents, who were wed out of obligation. Her grandfather spending his time attending to affairs of the kingdom of Macava and her grandmother just having affairs. In a twist that I did not quite see coming, Elizia’s grandma slept with a lizard-man just to see how it felt and she got pregnant. The lizard guy being a diplomat. Note that Render/Smudge slips out at this point and I THINK this is a subtle tip off that Render had feelings for the old Queen as well, which would make him waaaay too old for Elizia, so strike all my thoughts on that above. 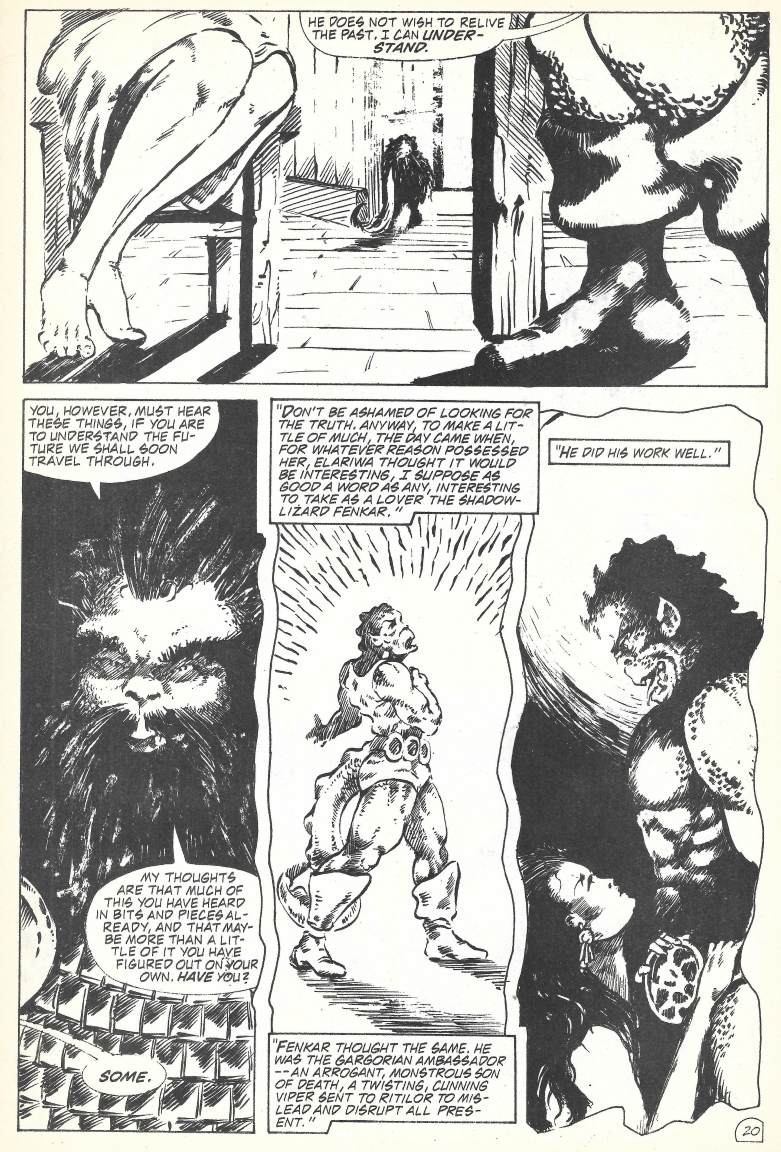 And after discovering she was pregnant, she threw herself from the castle wall while in labor to spare herself the embarrassment. She died, but Lenhar lived. He wasn’t exactly accepted at court, but the king would not see him abandoned. So…half-lizardman heir. Cool. And you thought your fantasy was the soul of diversity. Look at how far out we 80’s kids were willing to embrace things. 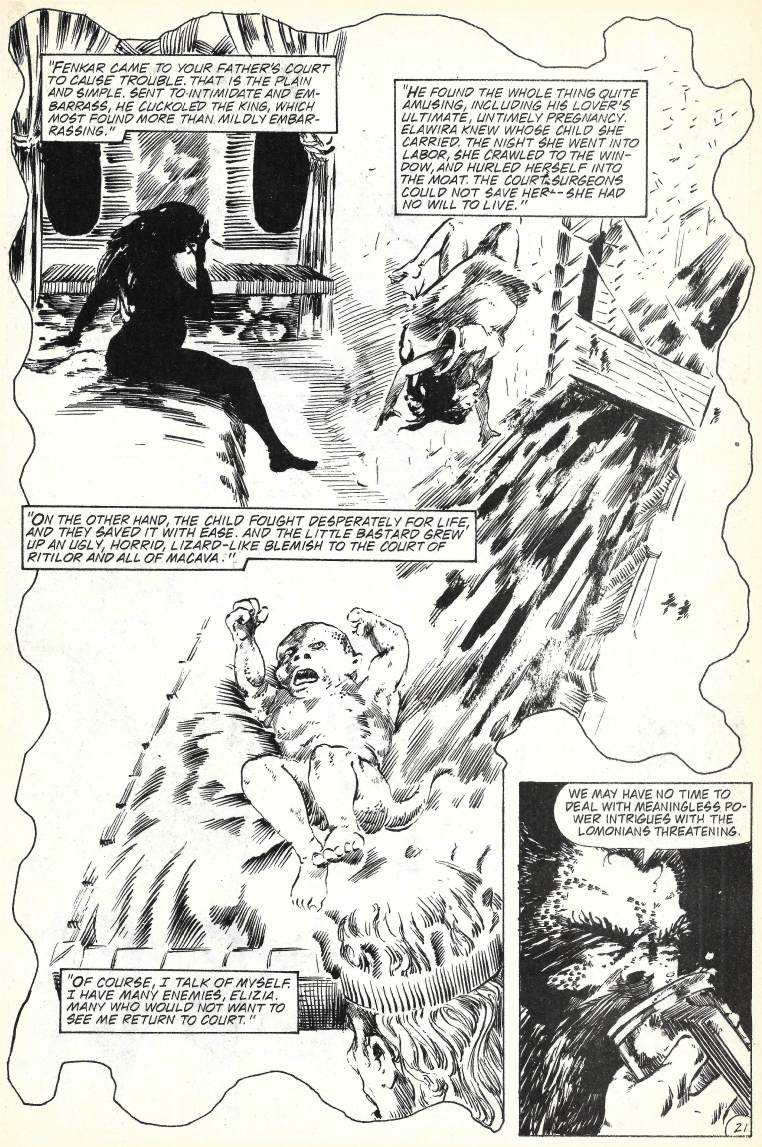 Then we get a page of the characters laying out where the rubber hits the road as far as the political upheavals and rivals they will soon be facing, ending with them deciding to shutdown Lenhar’s farm that day and decide their strategy the next morning. 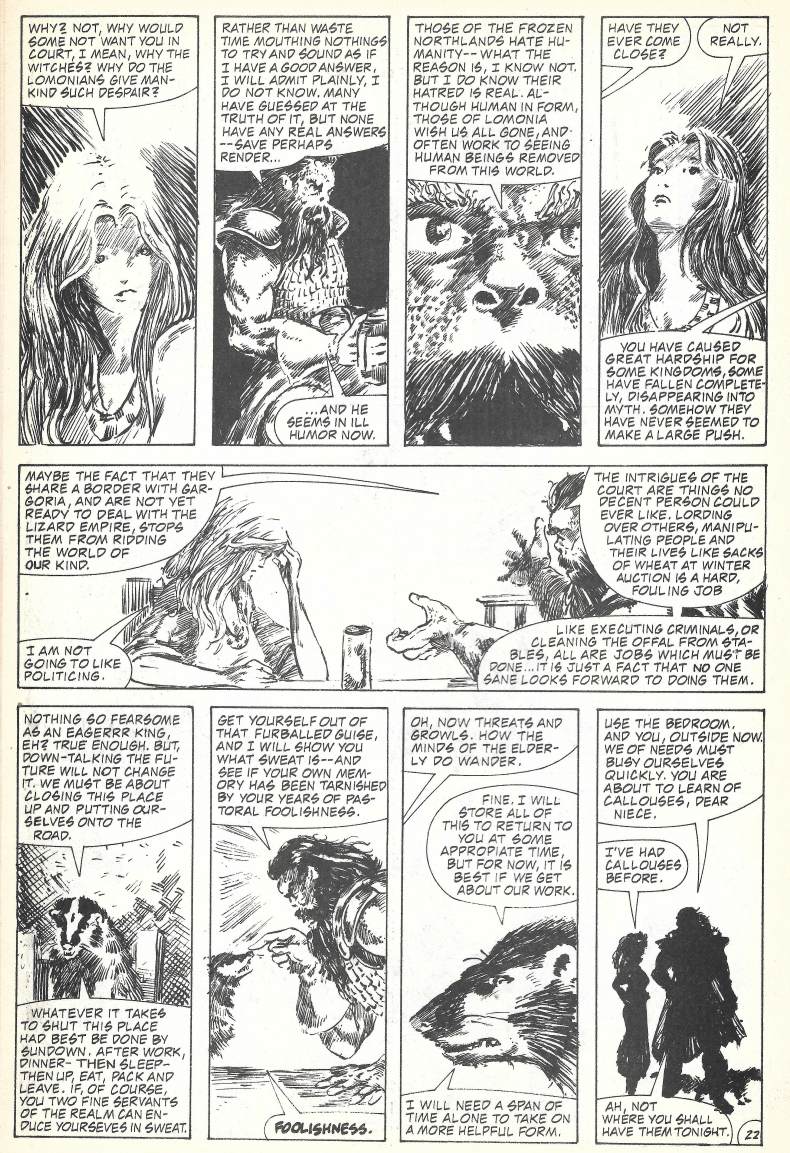 As evening draws close, Render has returned to human form and the trio share a meal… 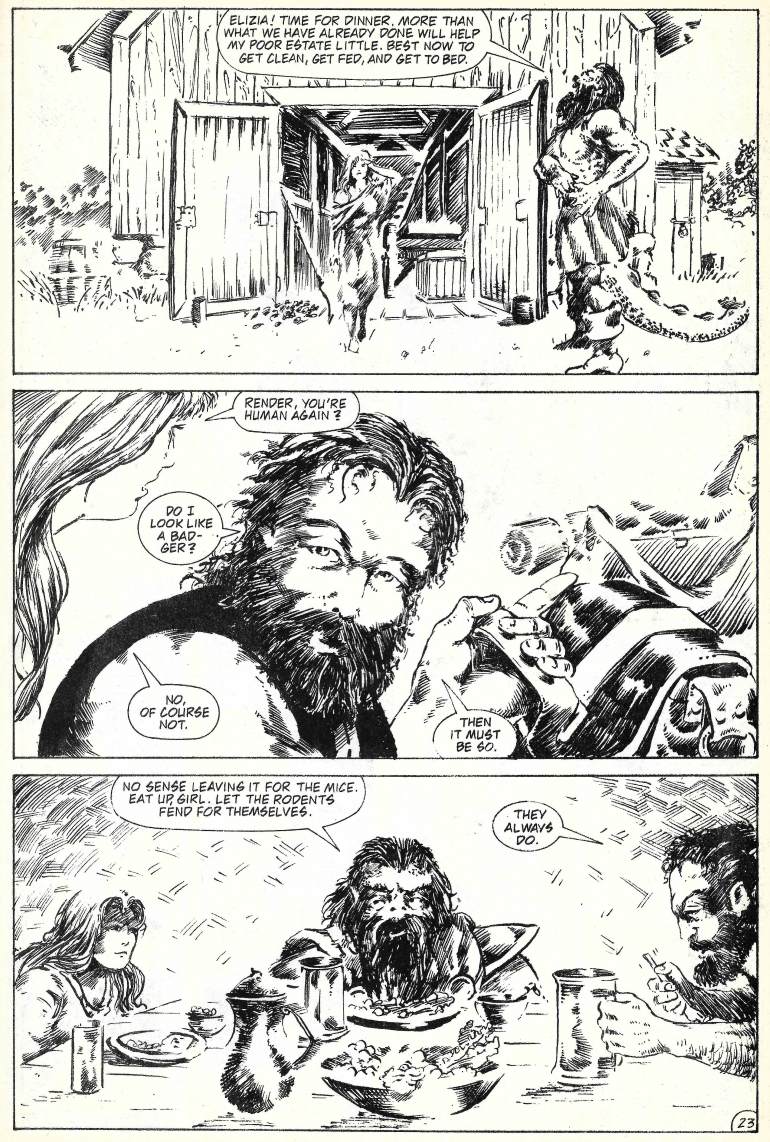 …and get to bed, the plans of what to do about Lomonians and the throne awaiting them next issue. 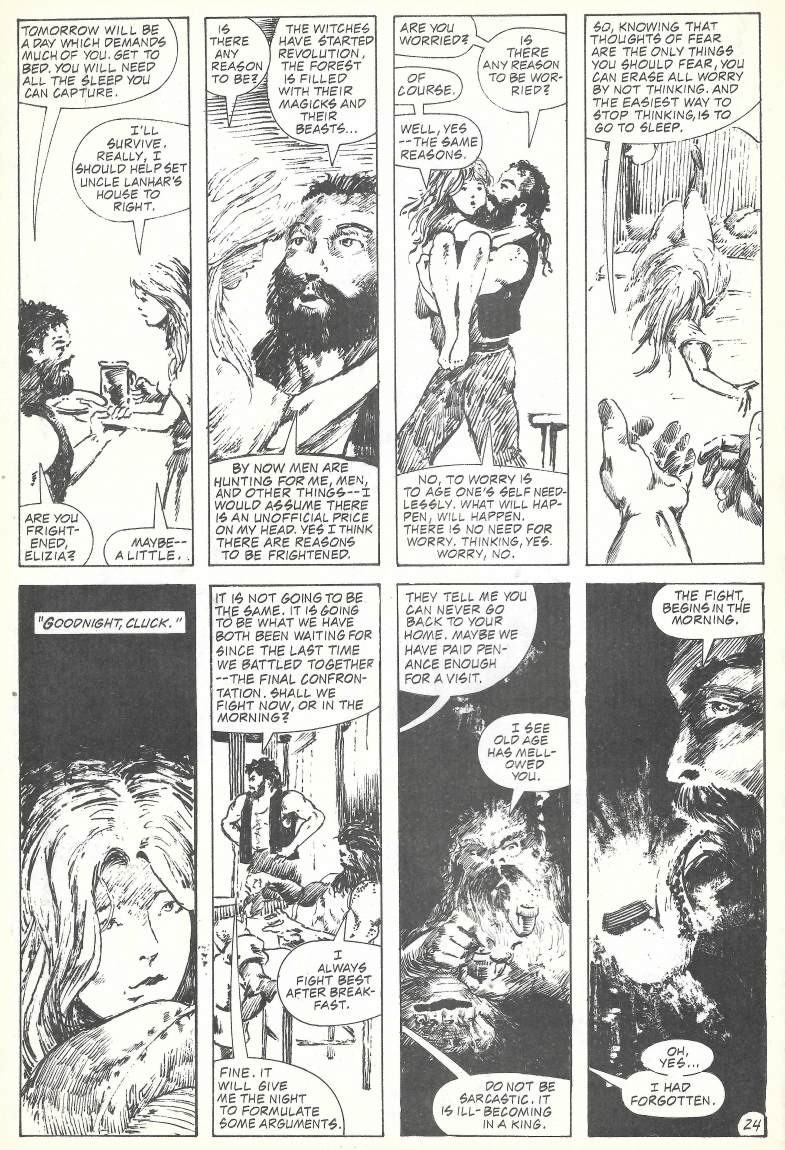 We’ve got three really well-defined characters started here and tons upon tons of world-building. What the book lacks is conflict. And I can tell from what sold in the late 80’s (like the Marvel Conan book and First’s Elric adaptations) that audiences of that time were more visceral in their desires for fantasy comic action. I would have been happy to have this book in my pull box, though. Better a slow-moving, thoughtful fantasy than a book with a fraction of the words and no brains or heart.

Sadly, this book didn’t make it.
Posted by SonOfCthulhu at 8:49 AM