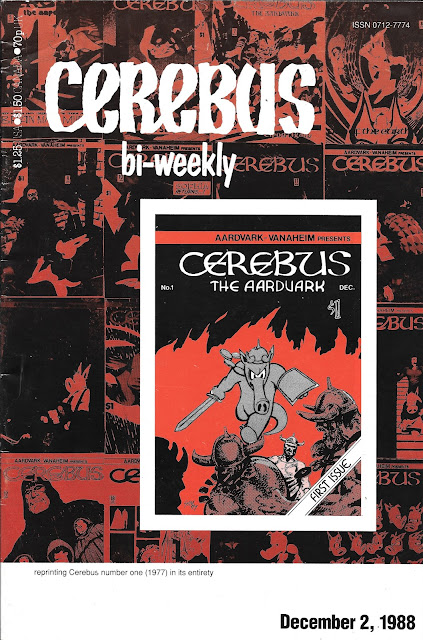 There is nothing more epic in scope than Cerebus. Dave Sim’s masterpiece comic series that forms one long story is that grand. Possibly the longest any creator has written a single character, Sim announced when the book was barely in double digits that he would write 156 issues of Cerebus. He later upped that to 300 issues and would chronicle the main character all the way to his eventual demise in over 6000 pages of art and story.

Sim filled those pages too. Cerebus began as a simple parody book, a “funny animal” lead walking through a story that blatantly stole content from Robert E. Howard’s Conan stories. Each main character had a tone that took itself seriously too, though. After a while the parody parts of the stories started to fade into random brief interludes and the real majesty of Cerebus began to unfold.

I say all of this without having read the storyline to conclusion, because over the course of 27 years Sim did indeed make it to 300 issues. I, however, have only made it through the first five “phone books,” those being the “agreed upon” most important volumes. Beyond those there are few plotlines that are great comic works and several that involve very divisive ideas on sex, gender, theism and metaphysics.

The books are heavy in more than just page count and weight.

So I have saved the latter pieces for a time when I digest them in solitude and absorb the good in them. Perhaps that time is now? Who can rightly say?

What I can do is ENCOURAGE all of you to buy the first four volumes. No matter who you are, they are essential reading.

What are they exactly? The books follow a strange little character called Cerebus. Cerebus is an anthropomorphized aardvark whose personality comes directly from those Conan books I mentioned. He speaks in third person, has a brash, cocky demeanor and seeks to rule his own kingdom one day. The first volume is littered with parodies of standard fantasy adventure tales such as this one and the style is part realistic and part counter cliché.

The volumes that follow this first tome shift the book’s tone as Cerebus works his way to power by trying to get himself democratically elected and after failing that, to gain a kingdom through religion. There are asides by characters who resemble Red Sonja, Groucho Marx and a re-occurring character who continually takes on personifications of current Marvel heroes such as Punisher, Captain American and Wolverine. Filled with tragedy and comedy, the books serve up an emotional rollercoaster that will make you laugh uproariously one moment and have your heart breaking the next.

Be careful with it. It is dynamite.

But this issue recounts Cerebus’s first outing, coming along as Sim started reprinting issues to meet demand in 1988, ten years after he started the book. In it, we see the cruder style he used for drawing Cerebus and the other inhabitants of the pages. Also this issue comes without Gerhard’s assist on backgrounds, which started in issue 65, an art addition that added tremendous amounts of depths to Sim’s illustrations.

But here it sits in the Crapbox, so we should give it a flip through and see what you think.

We begin with Cerebus riding past these two men on his way to visit the town’s local tavern. Sim saves his effort trying to give Cerebus a consistent look at this point, setting for the raw emotion of drawing the character. As a result, Cerebus looks positively goofy, and not in a good way. 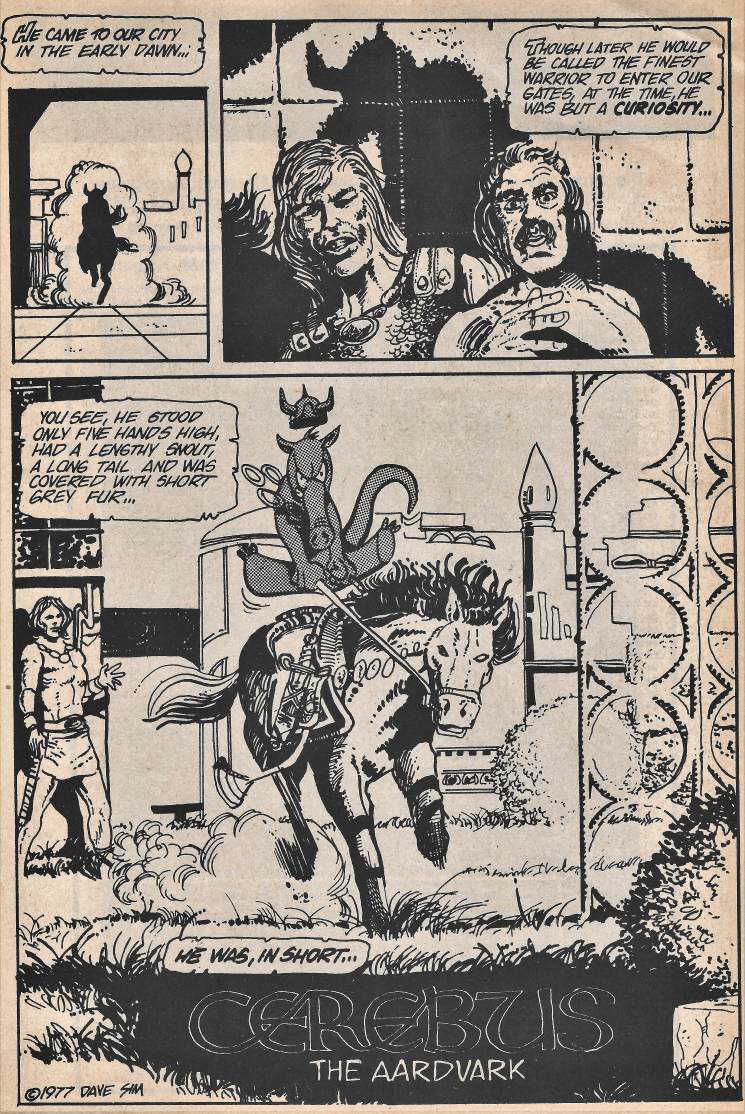 And just as you start to dismiss the character and the book for its crude art style, Sim does this bit with the bar patron picking a fight with Cerebus only to lose his hand. While not adept at figures at this point, there are lots of good art cues here, like the bars in the tavern making it look as rough as a prison. And the low angle used by Cerebus as he walks in, as if he looks down on the mortal bar customers. As for the tough and surly barkeep, who doesn’t care for Aardvarks, watch that body language give way to… 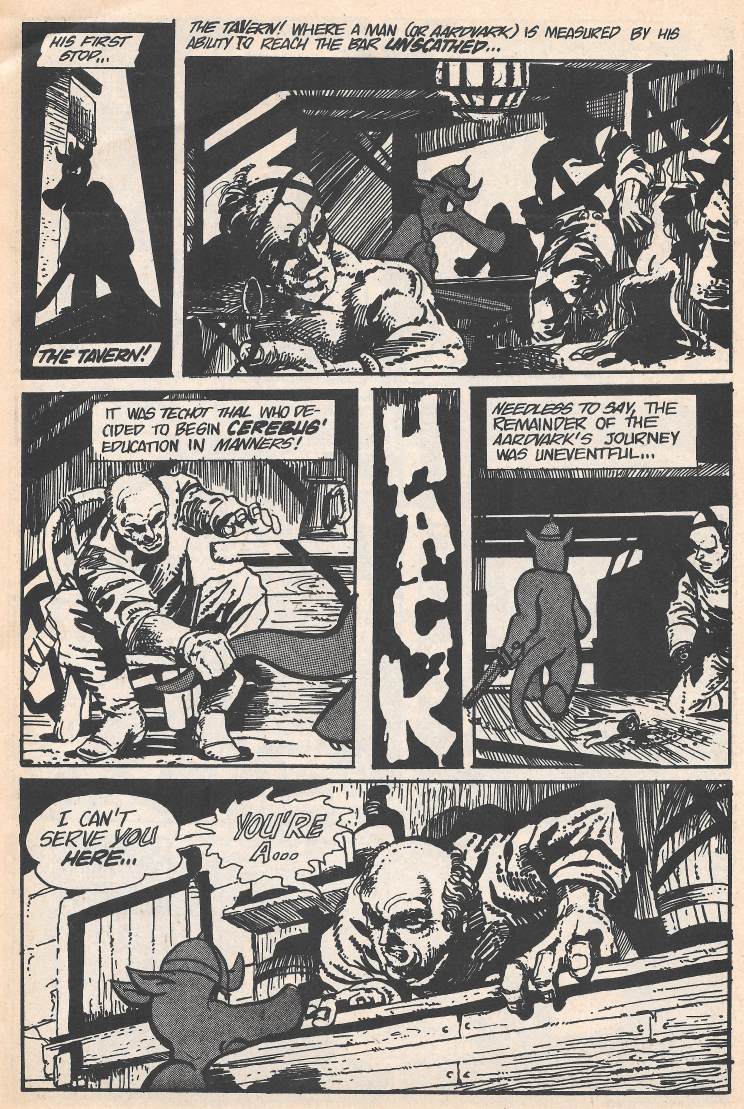 …fear found only at the point of a drawn sword. 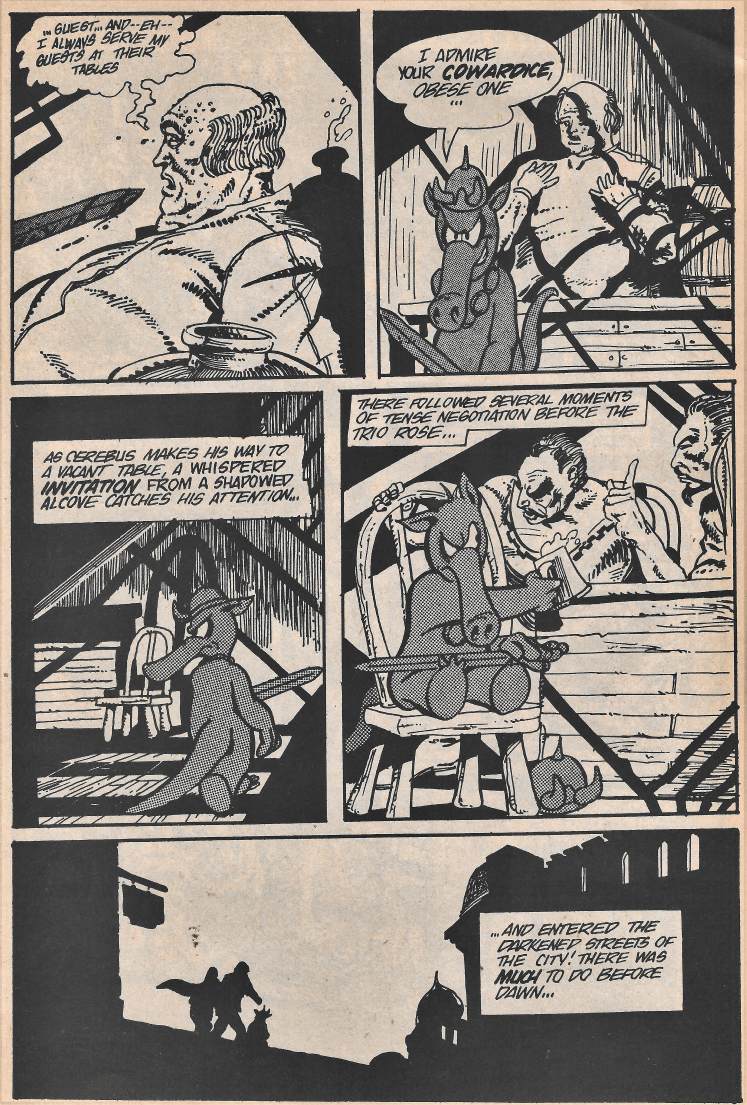 Cerebus stalks that bar, with Sim giving him eyes reminiscent of the monster from those old Bugs Bunny cartoons. To further alienate him from his surroundings, Cerebus is the only creature that is shaded in this odd half-tone manner. In essence, he is different in much the same way that Conan is different. He has a destiny we are supposed to care about, which explains why Sim rendered him so uniquely out of the world he inhabits.

In the story, Cerebus obtains a job in typical Conan fashion: from two ruffians whose morals and the work they would pay for both highly questionable.

Next page the pair and the Earth-pig stand outside a wizard’s tower. The pair are explaining that they want Cerebus’s help breaking into the tower and stealing the mystical, magical Flame Jewel. They want to do it stealthy but Cerebus runs out of the hiding spot. Note that Cerebus shows a lack of foresight that is his trademark here, a trait that will cost him a kingdom, the love of his life, and all the things that will eventually matter to him. In these panels he just comes off as headstrong and foolhardy, but this characteristic will eventually define him and defeat him. 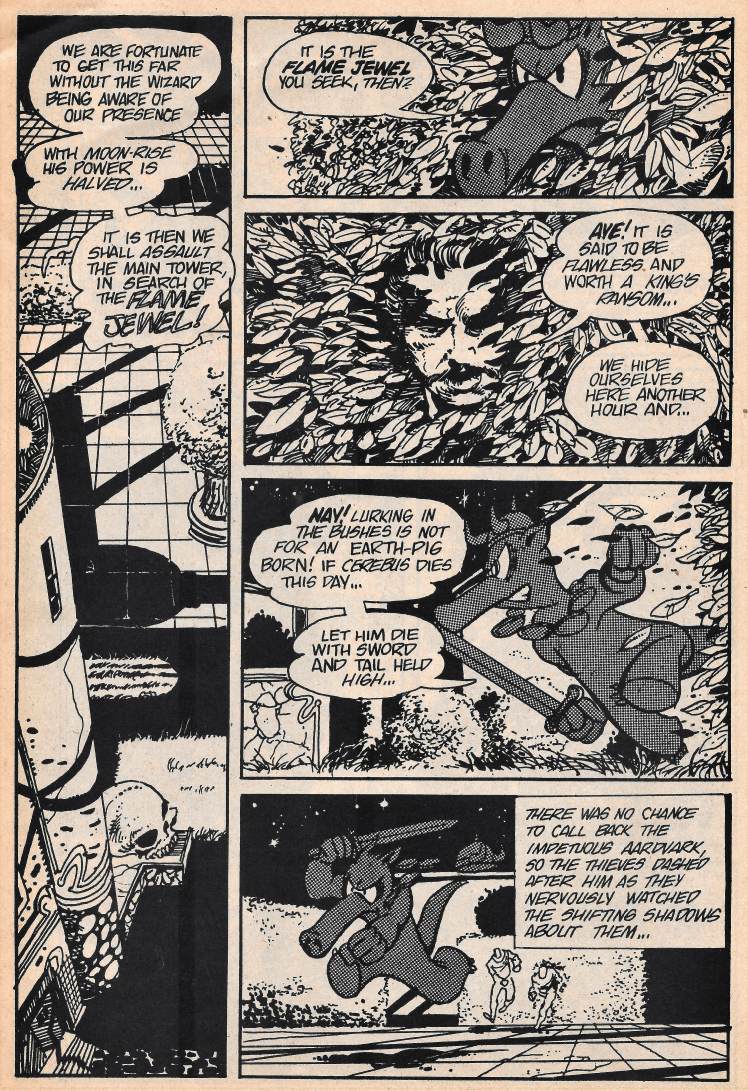 Inside the sanctuary, an older wizard notices their approach with no more interest than he would at the aggravation of kids on his lawn. We should sympathize with him a little, he’s minding his own business when thieves burst into his home looking to kill him and take his property. Like all wizards in these stories, however, our victim is more than happy to murder our principal character and his cohorts in return for mere trespass and the cards most definitely are stacked on his side of the table. He could have killed Cerebus here, but he is shown not in typical cackling evil fashion as one would from a Howard tale, but like a person starting to lose their edge. At every turn he acts like he’s forgotten how to do something properly. 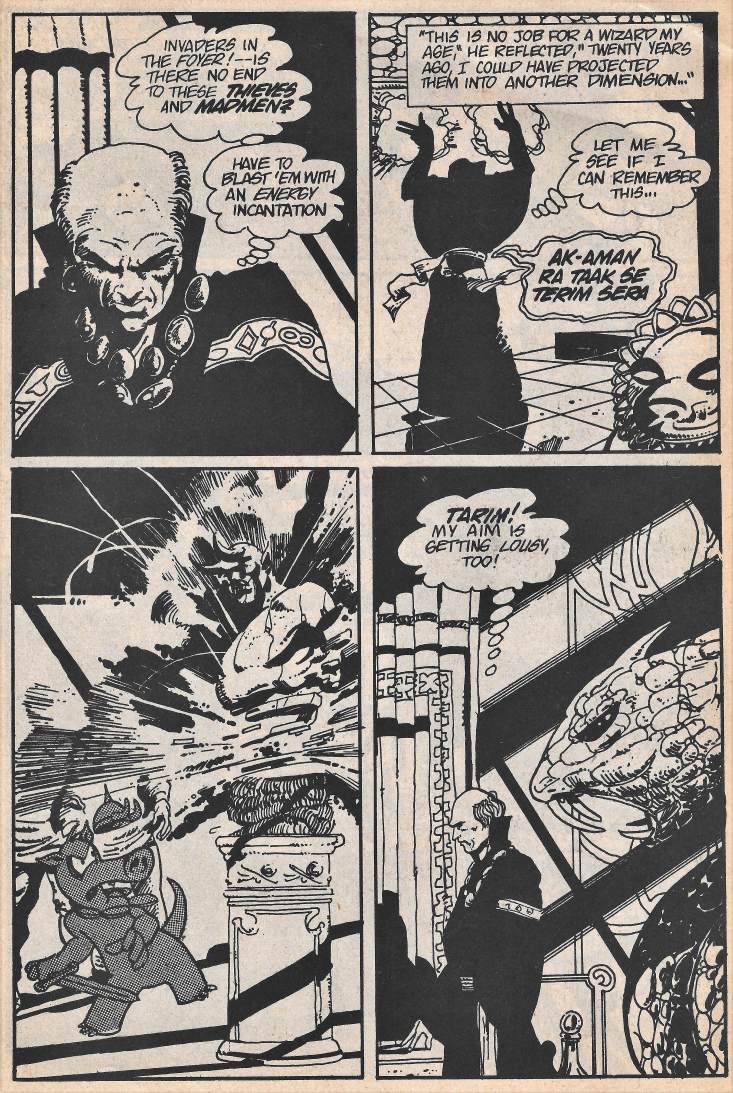 As they probe deeper into the wizard’s sanctuary, they come across scattered skeletons of past explorers, which Cerebus dismisses… 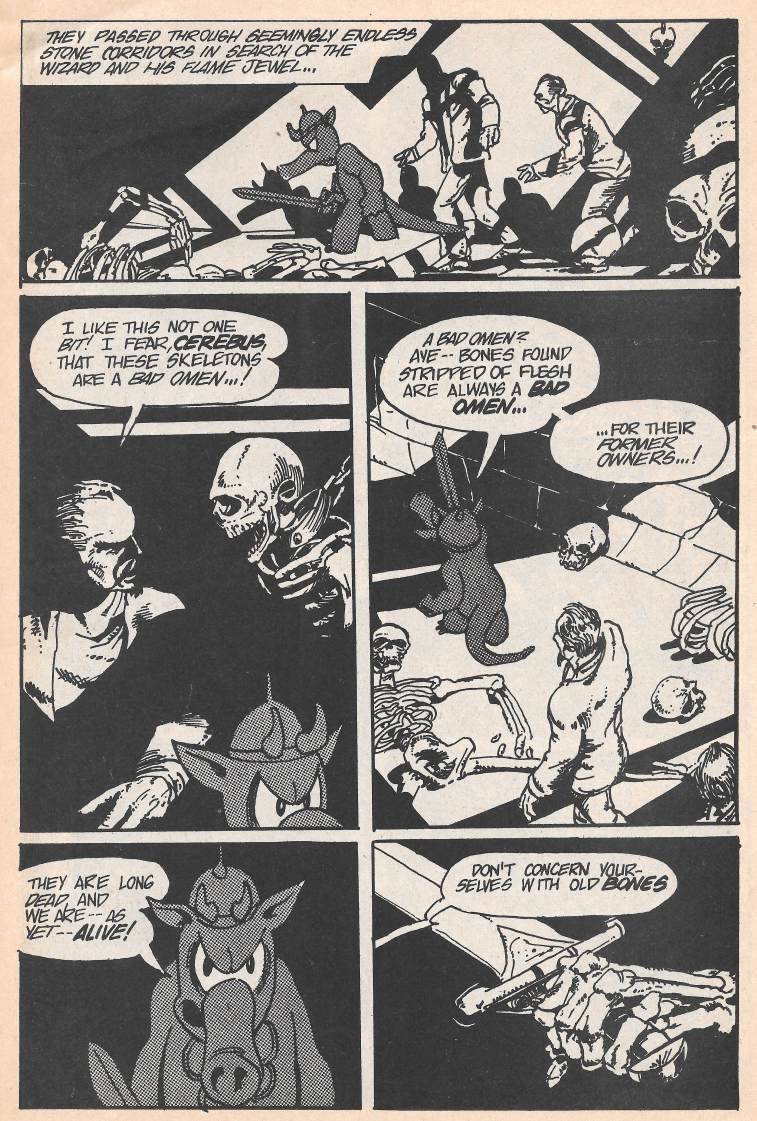 …until his more cowardly companion’s worries come true and the skeletons come alive and menace him with their flashing blades. Sim gets closest to his eventual Cerebus design on this page in the bottom panel on the left. 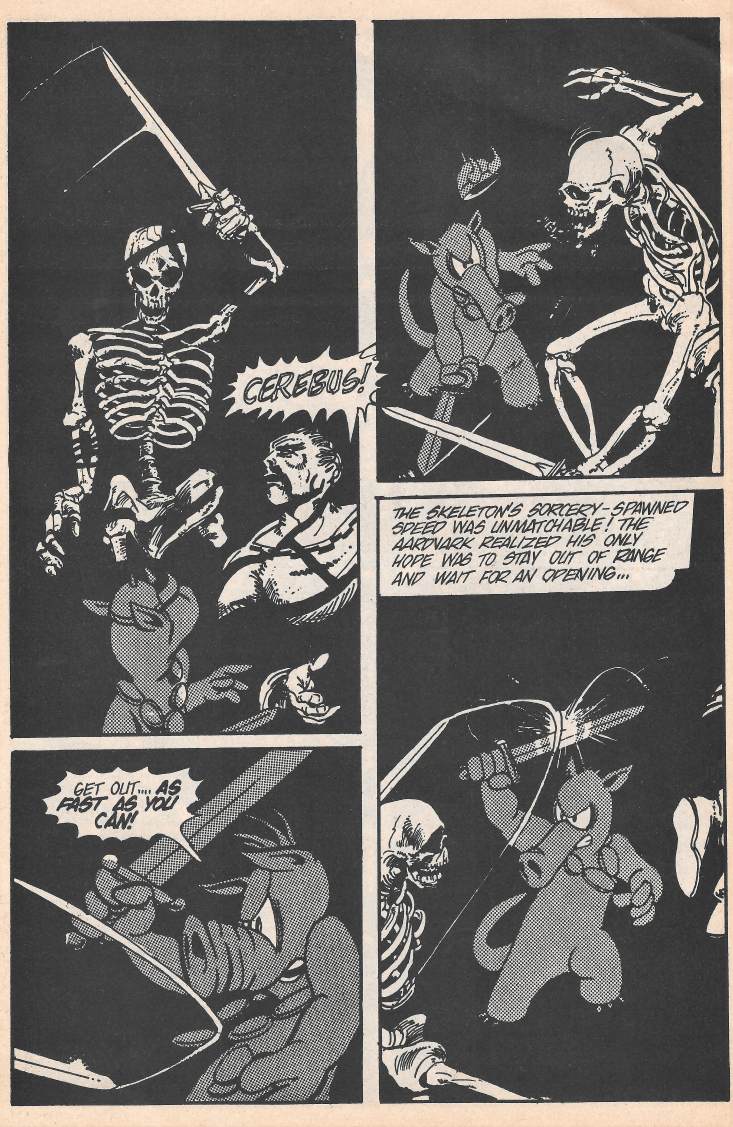 Also, as if calling out for Gerhard’s backgrounds, Cerebus begins ascending a staircase that Sim doesn’t fill-in. Odd how that something that was a design decision back then looks like an unfinished page to us that have read the comic for so long. 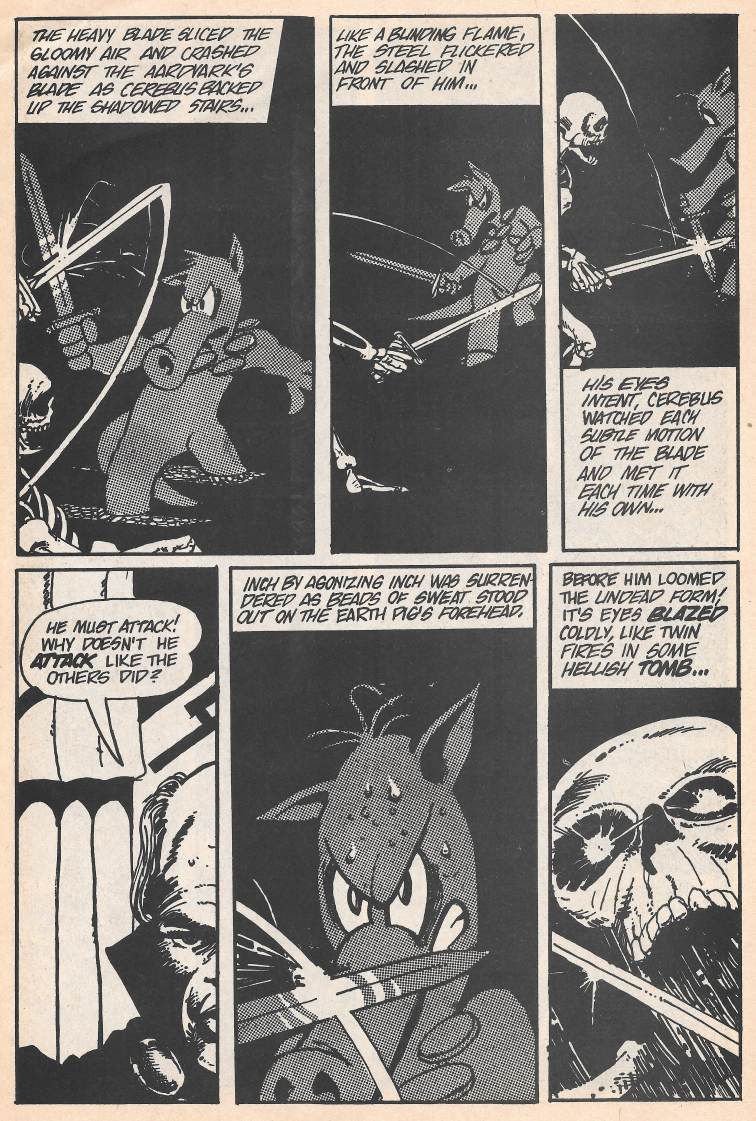 Anyway, Cerebus is breaking a sweat trying to defeat the wizard’s trap… 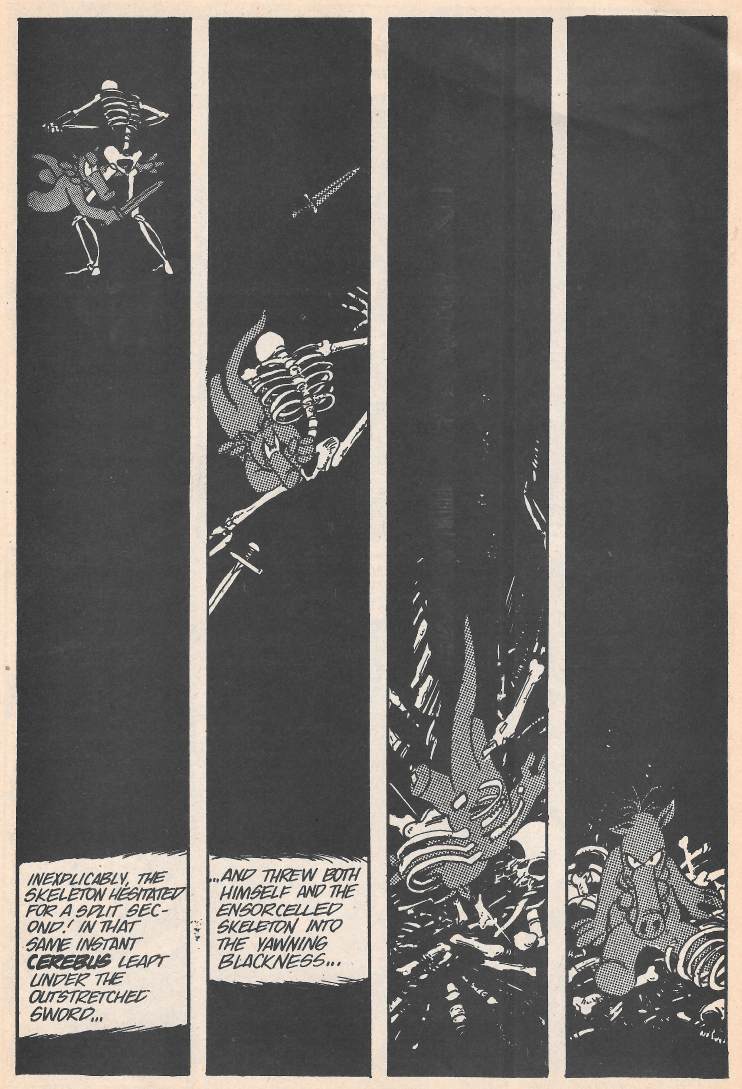 …which he ultimately succeeds in doing by taking a tumble in another backgroundless scene. The message here is that Cerebus is not only headstrong and foolhardy, but also that he is unbelievably hard to kill. 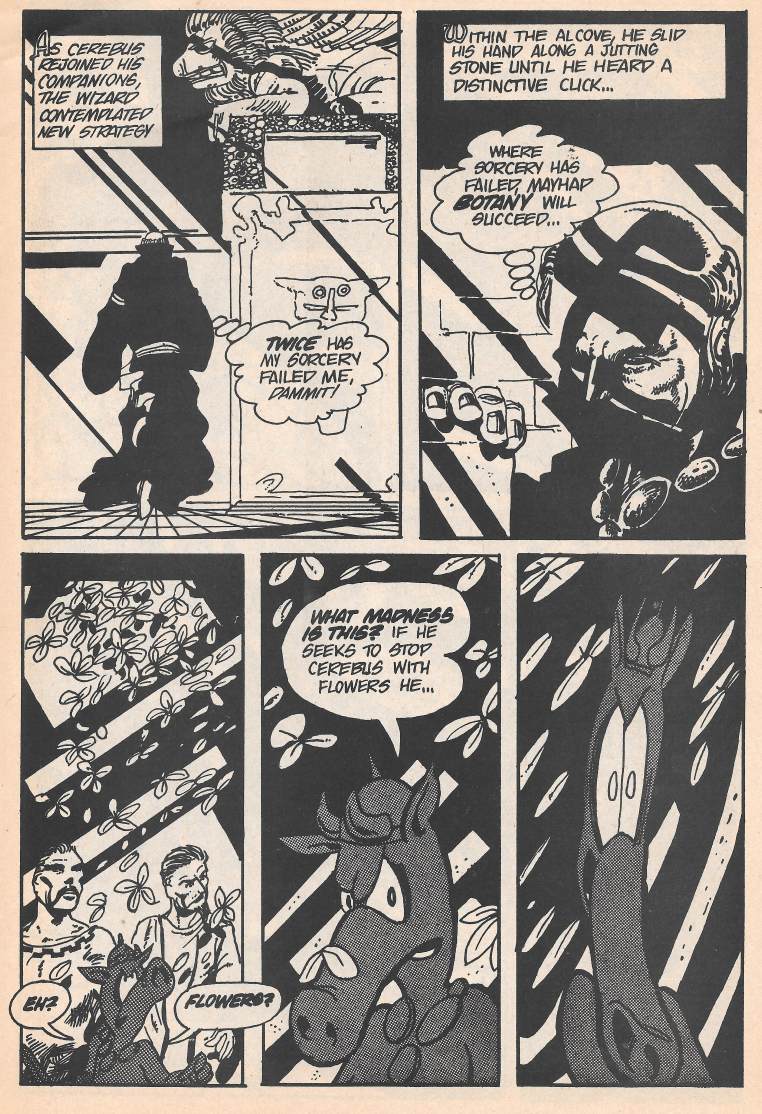 …as Sim uses the mental fog created by the potent drug to bend and distort his figures as a way of expressing their discomfort. I don’t like these panels, not only for their amateurish bent, but also because they are too easily mistaken for poor art. If you hand someone issue one of Cerebus and they pop open to this page, their reaction when you tell them of how it has some of the most amazing art to ever grace a black and white comic will be to laugh in your face. The evolution of the book in the beginning was something that ramped up VERY quickly. My only thought was that Sim was behind the scenes working his butt off to refine his style the only way an artist can: practicing until your fingers bleed. It is a real honor to have his later work develop into the amazing graphics and a sign that even the worst that the Crapbox has to offer has potential to develop into something great if the artist is willing to sacrifice to make it there.

Well, maybe not the WORST in the Crapbox, but you take my meaning… 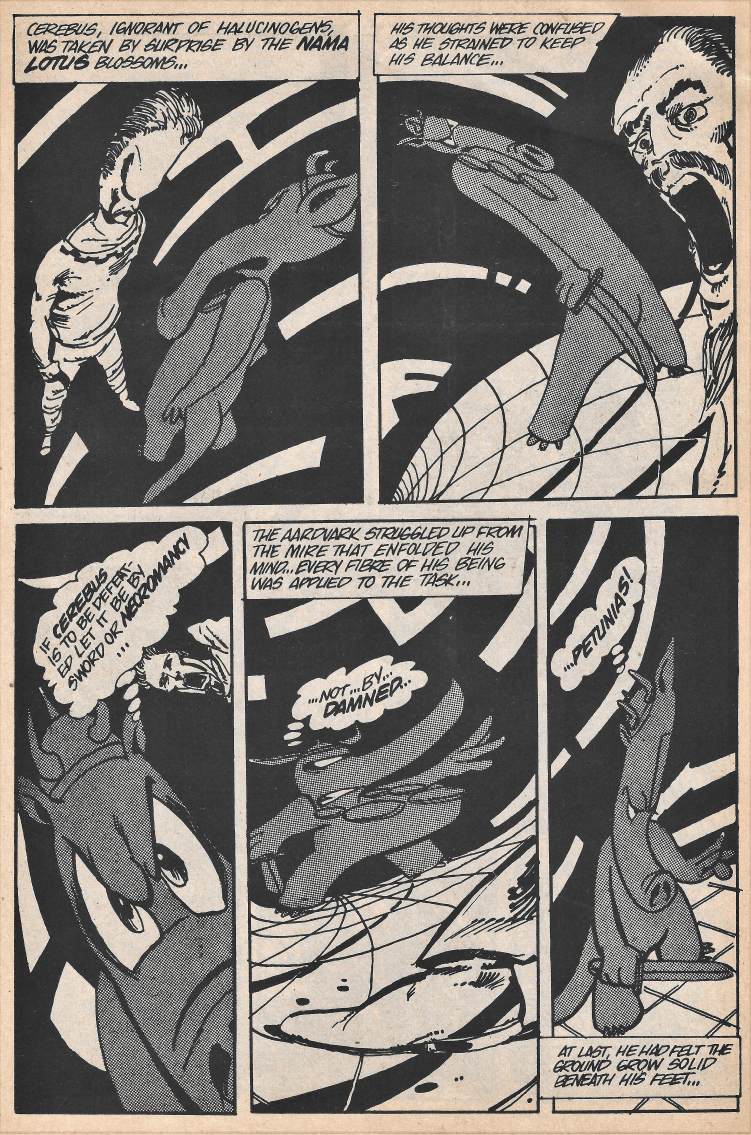 Storywise, the characters make it past the drugged hallway and while his companions are willing to quit, Cerebus isn’t. Sim uses a stationary background while showing progressing figures in the foreground to neat affect here, giving them the impression of advancing toward the prize even as the criminals contemplate backing out. 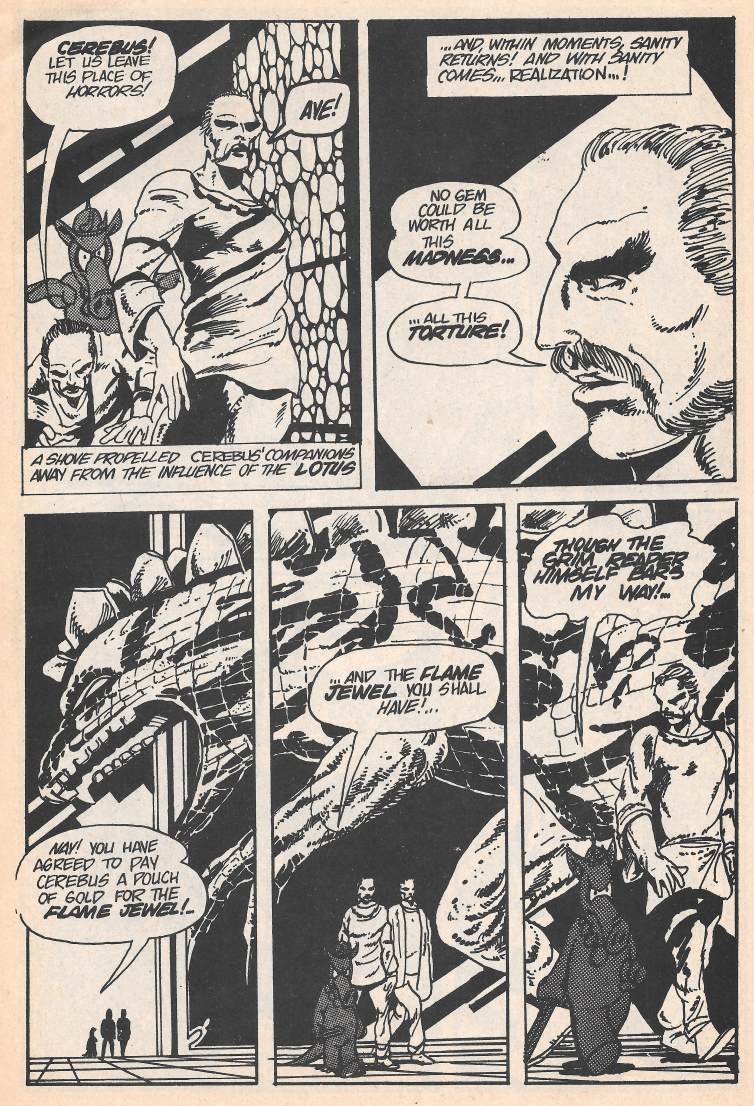 It’s at this point that Cerebus uses his head, something that Conan would always do by some manner of instinct, and determines that they have been walking in circles fighting illusions. As he makes this astute assumption, the wizard finds them… 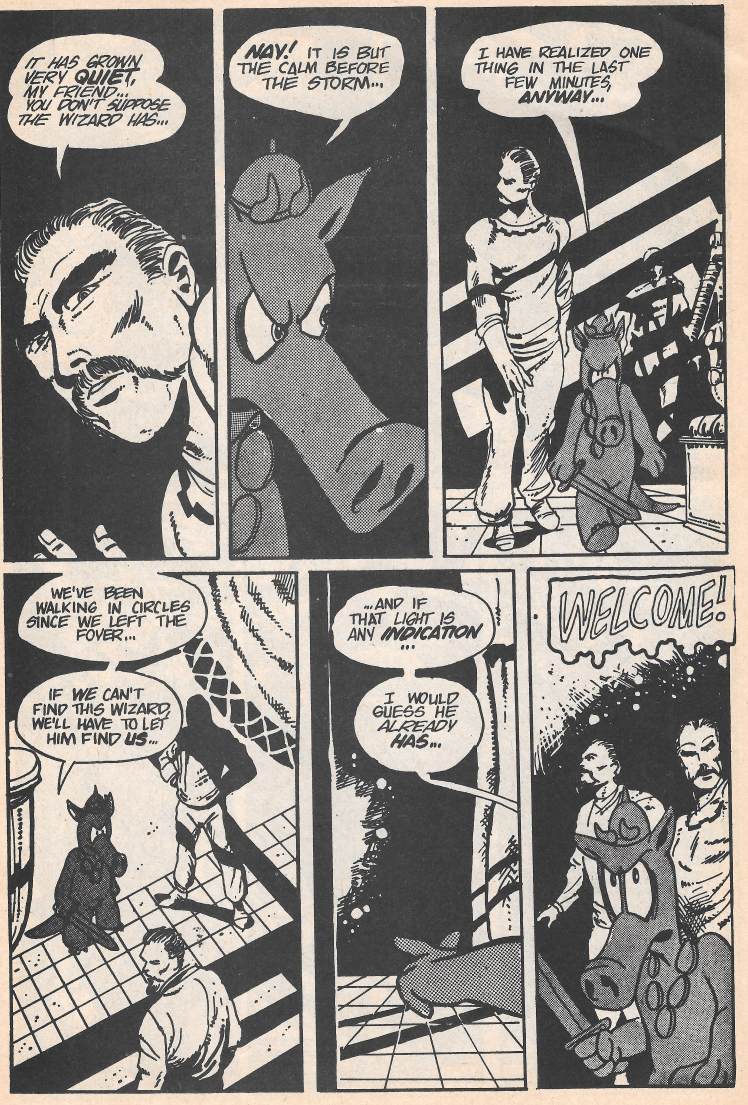 …and unleashes a horrifying dragon… 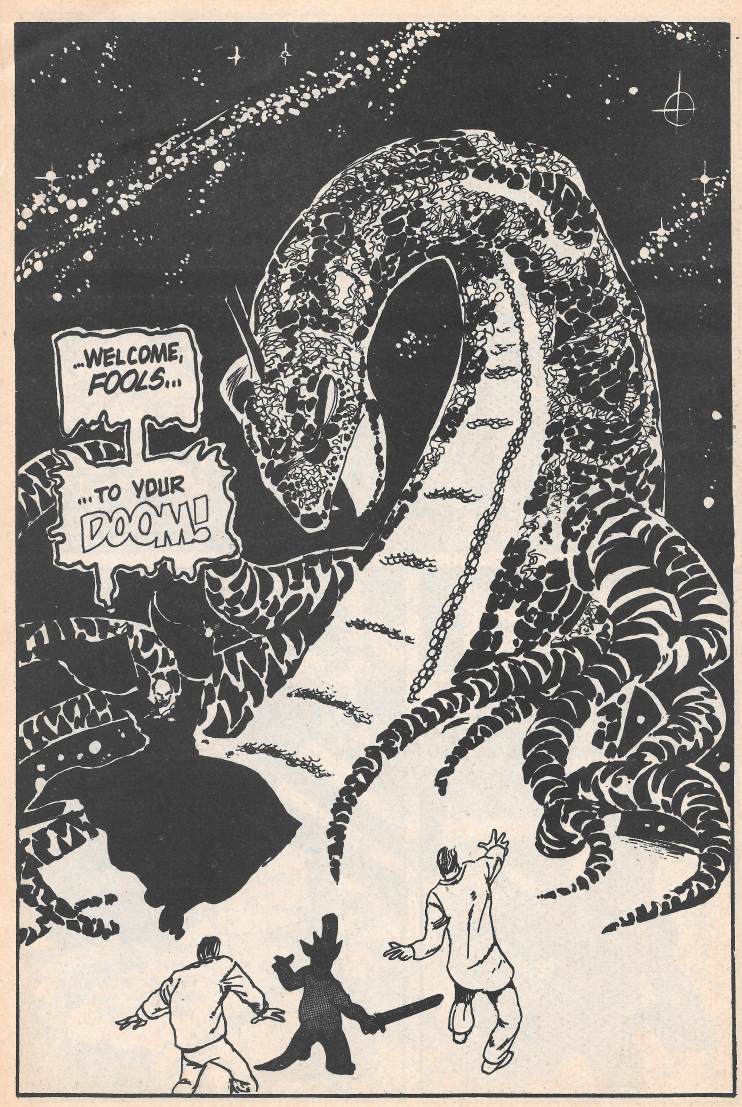 …which his companions are swept up in fighting while Cerebus closes his eyes to ignore the phantom beast and starts advancing on the wizard. 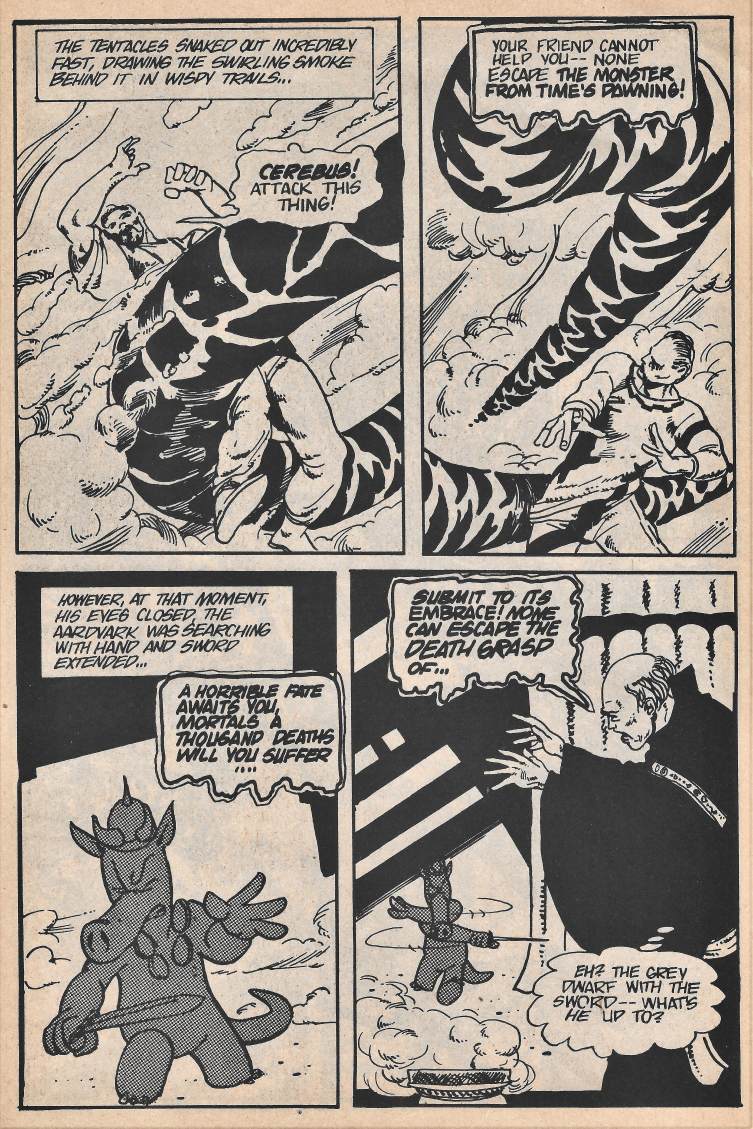 At first the old man doesn’t see the danger, but as he realizes his plight he continues trying to dissuade or distract Cerebus from his murderous intent, ending with a jokey like demise that still has an edge of moral ambiguity. 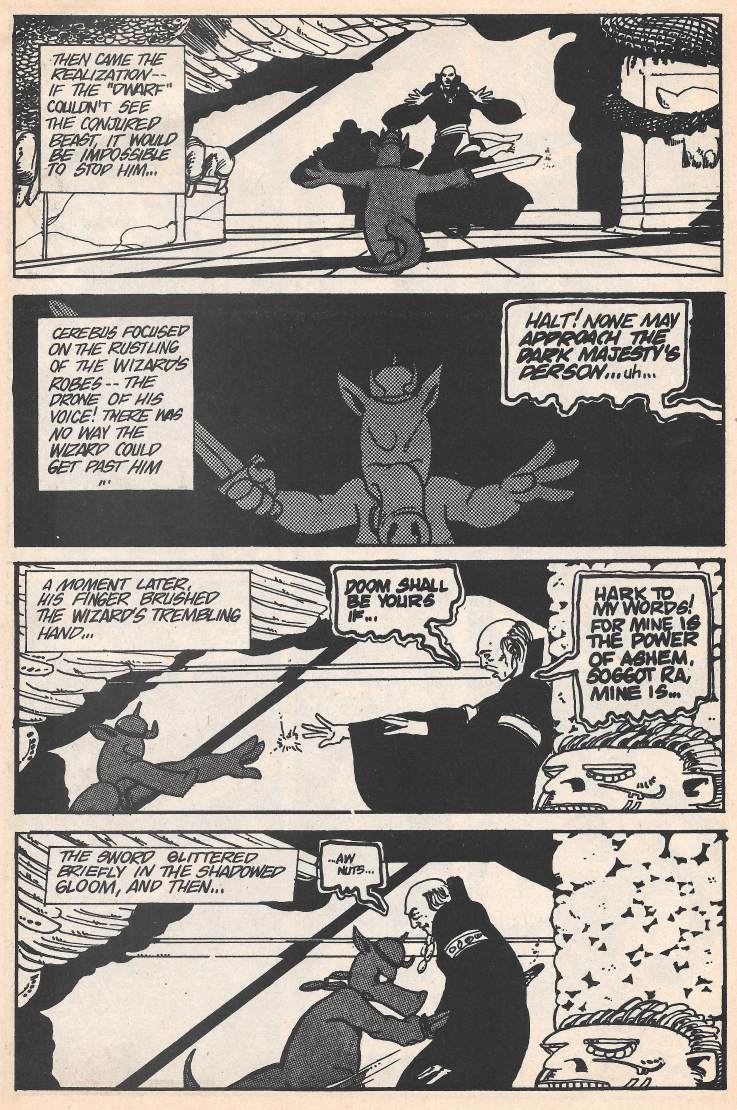 As the mage crumbles to dust, having been several centuries old, our trio retrieve what they came for, the mystical flame jewel. And with that in hand, Cerebus demands his payment in gold for helping them. 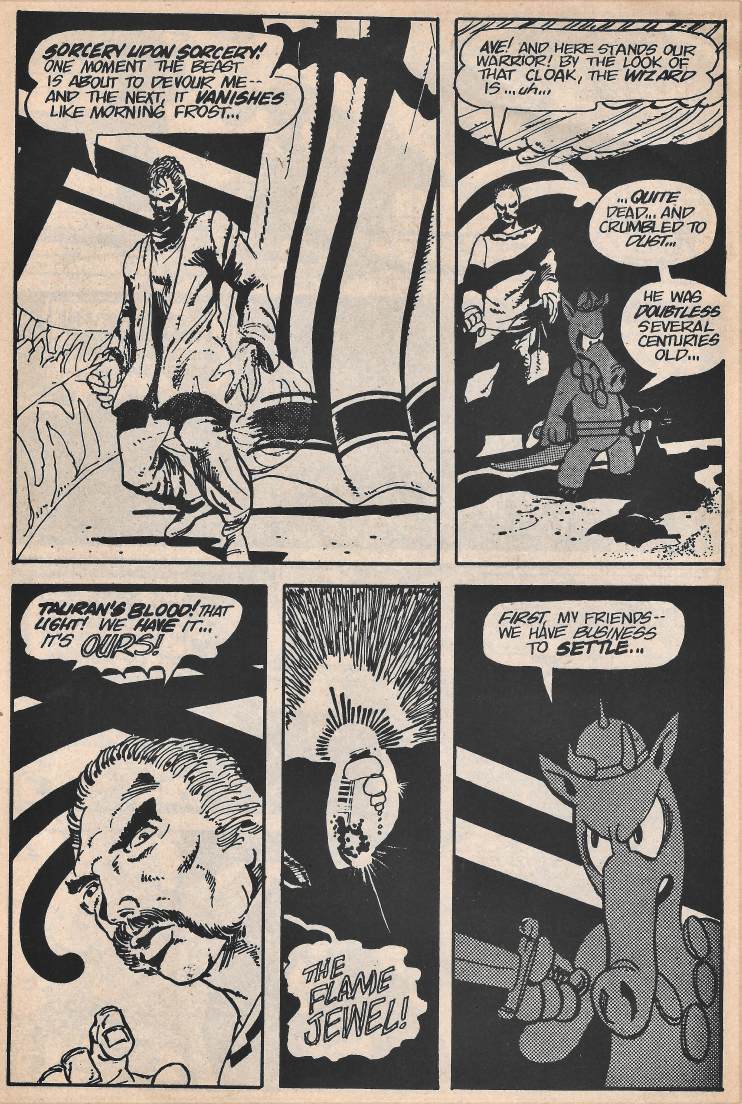 As they exit the wizard’s keep, all his finery dissipates back into mist and smoke until the rooms are all empty. 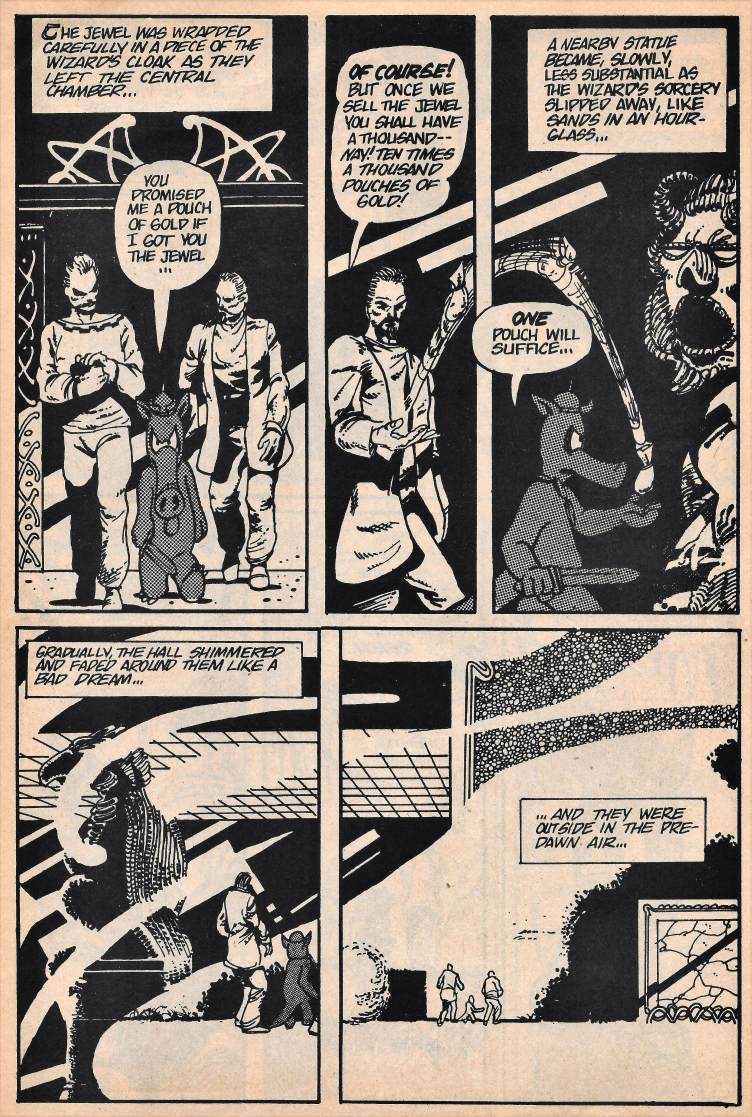 As they walk back to their horses and the reward that awaits Cerebus, they ask how he defeated the wizard. This comes off as very counter to the Conan stories, with Cerebus understanding in detail what the wizard was and how to best defeat him. So he’s a thinking man’s barbarian, which is a change to the archetype and a welcomed one. Also that means the flame jewel they’ve fought so hard for is actually a… 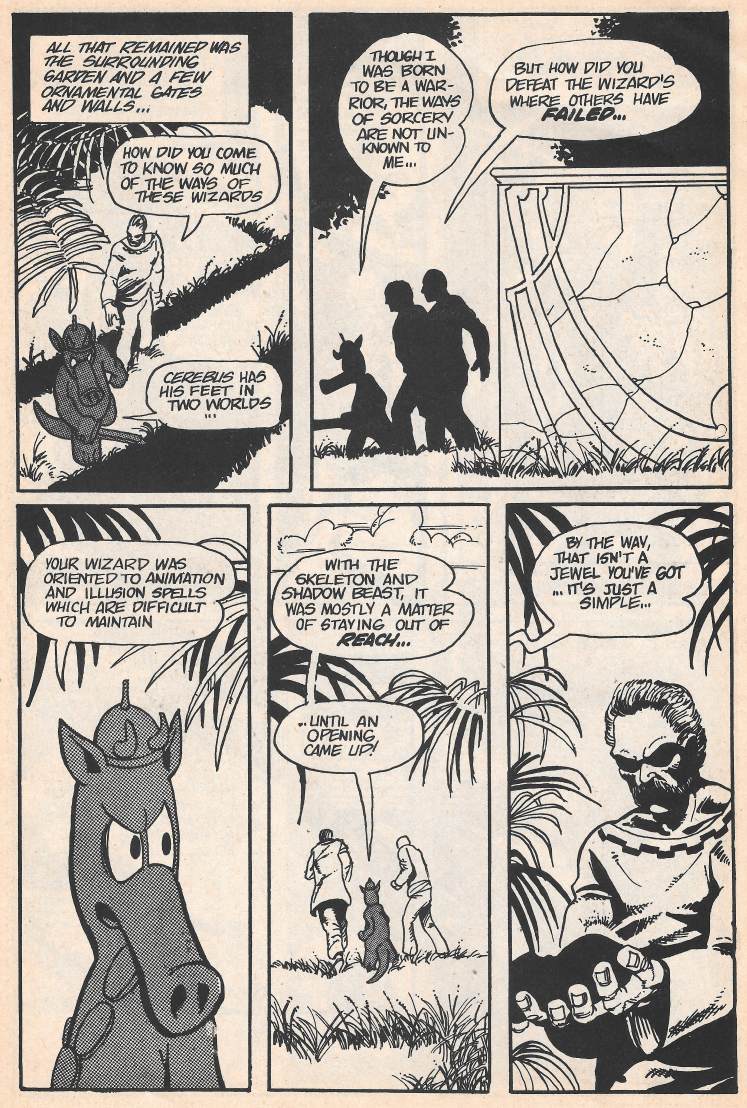 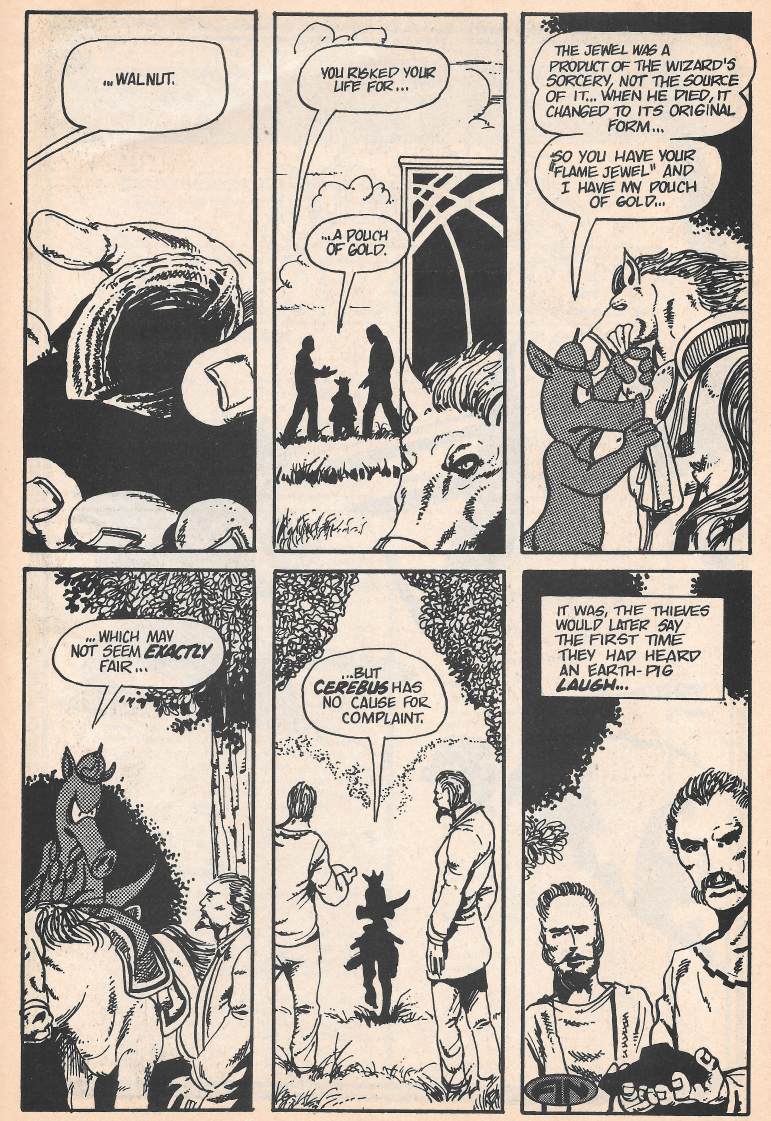 And in a bit of a twist from the Conan tales, the hero of this saga is left better off than the people he helped, with Cerebus’ bags laden with gold and the two ruffians holding a very expensive nut.

It isn’t much, really. It starts off at such a slow burn that you begin reading them for a visceral, short adventure tale with a bit of humor piped in. By the end of the first phone book you’ve found they’ve gotten smarter, however. The plots become more tangled. If you start High Society, you’ll find the book is now on a downward slope toward greater things though. The rollercoaster ride has started, so to speak.

I urge you to get on. Read the first phone book out of idle curiosity, if you must. Or read it with a head shake that this is just a dumb parody title with a few good laughs. But read it. Get on the ride. Because after you start High Society, I know I won’t see you until the end of Church and State II at the very least.

And that’s a good thing. Worth reading. Do it.
Posted by SonOfCthulhu at 3:02 AM